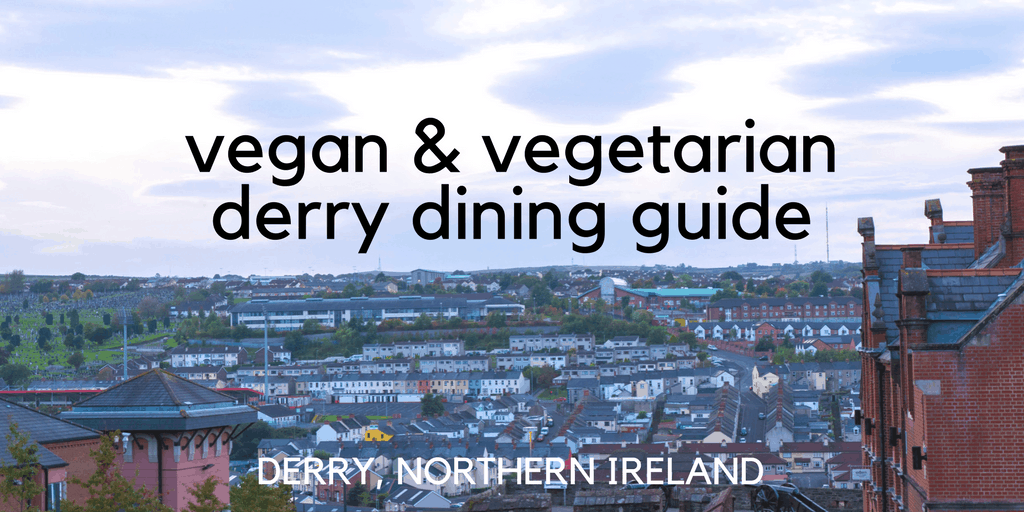 Check out these places to eat in Derry that serve vegan and vegetarian meals!

Have you been to Derry yet?

It’s an intriguing city with a deep history. First, it’s the only remaining walled city in Ireland that’s completely intact.

Derry has meaningful murals in the Bogside neighbourhood that explore their political, social, and economic struggles, and demonstrate how the town strives for peaceful resolutions.

And after so much exploring, you’re bound to get hungry, right? I’m always seeking the best food when I travel, and in particular, vegan food. Although there aren’t any entirely vegan restaurants in Derry, it’s not difficult to find a delicious vegan meal. Let me show you the best places to eat in Derry where you’ll find tasty eats to satisfy any appetite.

Browns Restaurant is my number one choice for an upscale restaurant in Derry. While it’s a fine dining establishment, don’t feel like you need to get too dressed up. Just bring your appetite!

There’s an entirely separate vegan and vegetarian menu at Browns Restaurant Derry. Chef Ian Orr developed a plant-centric menu to provide that fine dining experience for everyone, even the vegetarians in the crowd. Browns Restaurant is truly one of the best places to eat in Derry, no matter what diet you follow.

We were served herb bread with olive oil, as well as a special treat as an amuse bouche. That little white cube is an aquafaba marshmallow infused with gin, and it was paired with a beetroot and broccoli meringue. It was the perfect matching of sweet and savoury, presented in a unique way.

Next, I chose the Wild Mushroom Arancini as my starter, which were fried risotto balls with mushrooms. Then, our server brought a surprise salad topped with crispy tofu to the table, which I graciously accepted. 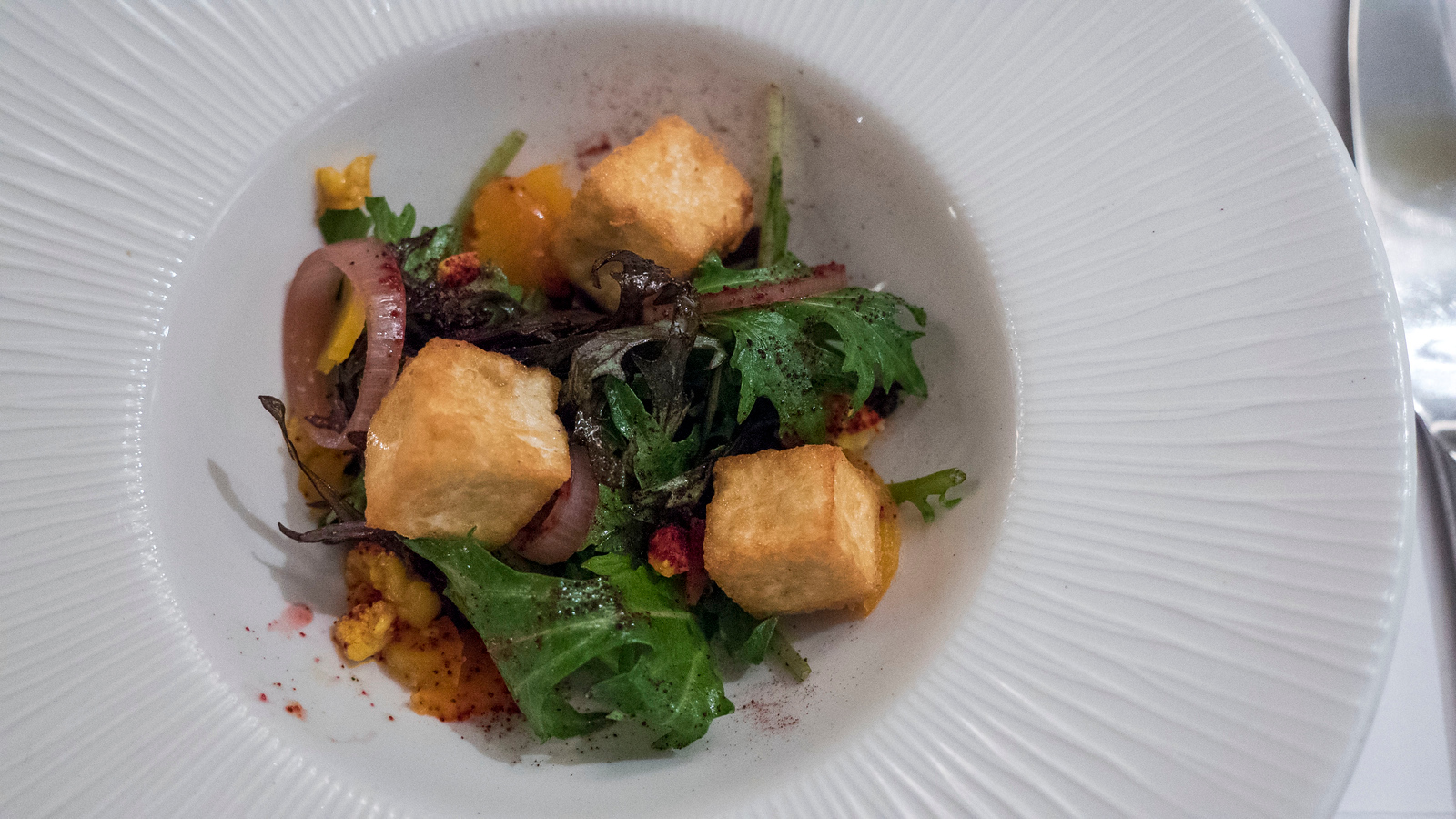 For the main course, I devoured the Wild Mushroom Ravioli, simply because it’s rare to see a ravioli on a menu that isn’t filled with cheese. The ravioli sat atop a bed of lentils and broccoli, and they were topped with truffles.

And naturally, there was a drool-worthy selection of desserts. I chose The Black Forest, which was a combination of dark chocolate ganache, marinated cherries, and a tart sorbet. With an edible gold leaf on the top, this dessert screamed elegance. Even though this divine chocolate treat looked incredible, it tasted even better.

With an attentiveness to presentation and flavour, I highly recommend dining at Browns Restaurant. While I dined at the Bonds Hill location, there’s a second one in downtown Derry. Browns Bonds Hill was easily one of my favourite restaurants in Derry. 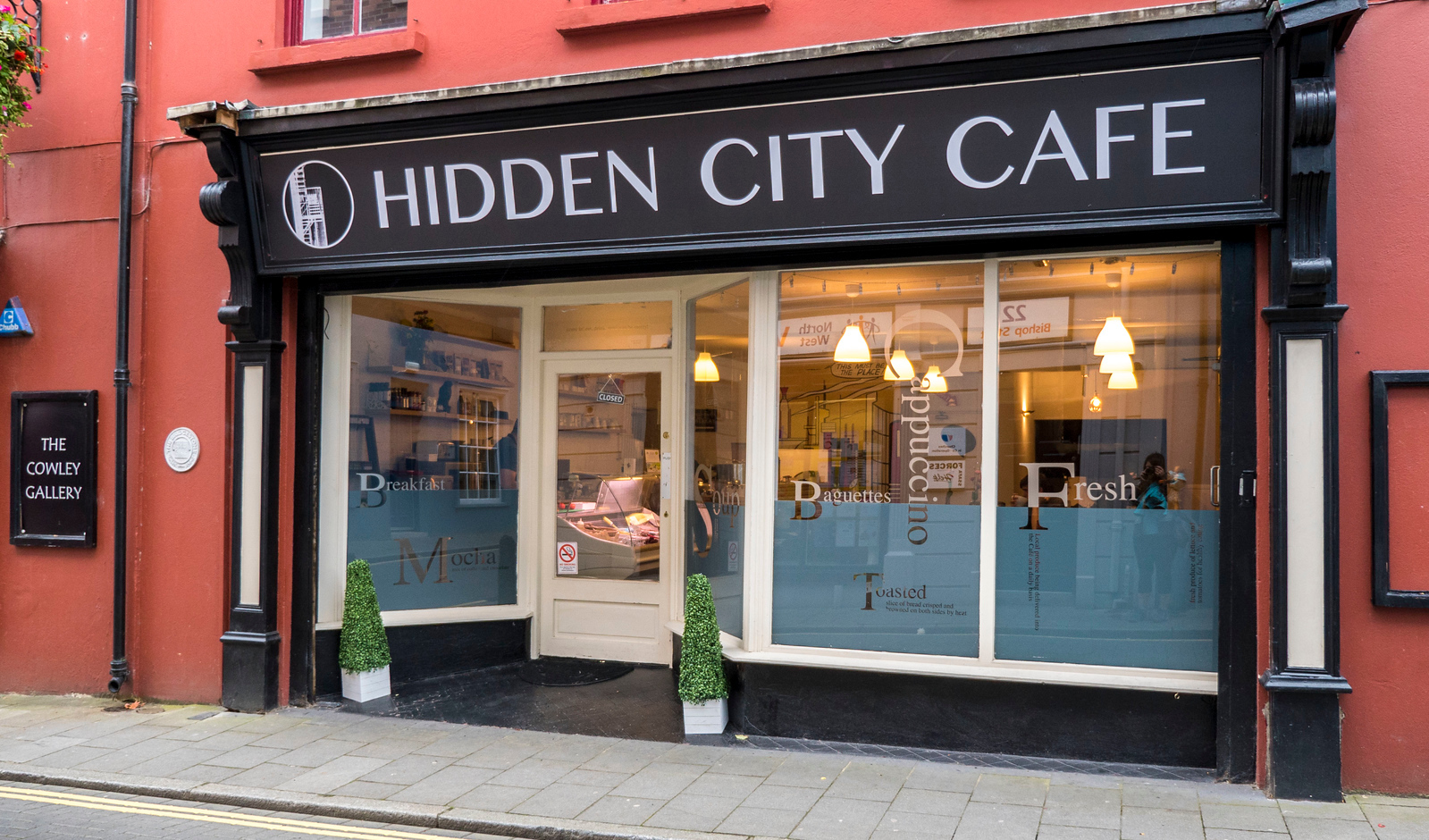 We had to stop at Hidden City Cafe before leaving Derry because it was a brand new restaurant in the city that served vegan options. Hidden City had some cute signage pointing you in the direction of the cafe. Well, sorry Hidden City, it’s not a secret anymore! I’m telling everyone right now – this restaurant is awesome.

I tried samples of the chickpea spice, R&B quinoa, and the Barons. These salads were all super flavourful and even a little spicy in some cases. Any of these salads would be excellent as a side dish or combined together for a meal. 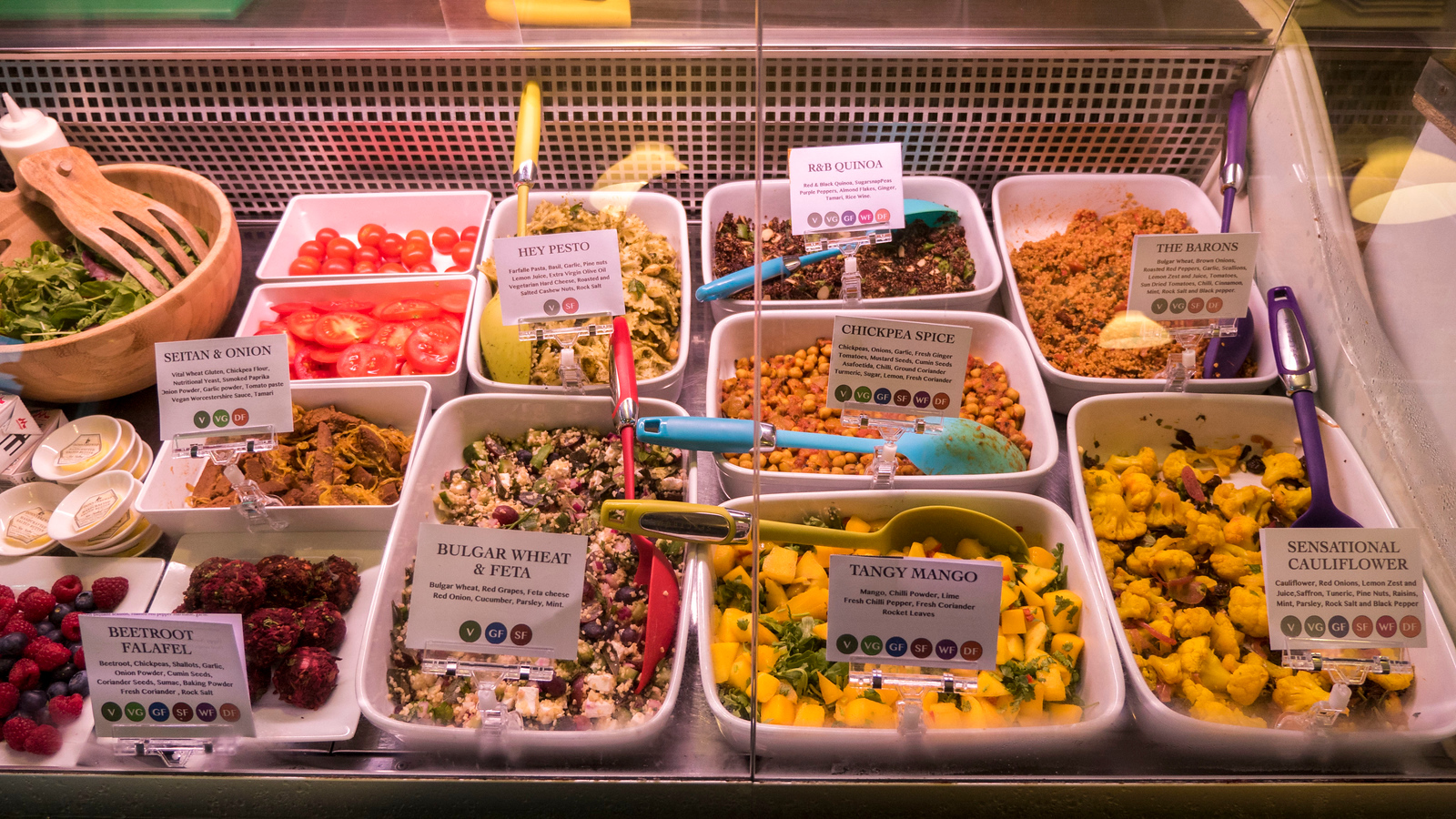 I took a sandwich to go using the seitan (“wheat meat”) and onion as the filling on freshly baked bread. I ate it as part of a picnic lunch later in the day, and it hit the spot perfectly.

The vegan desserts at Hidden City Cafe are baked by local business Ann-marie’s Vegan Cakery. I couldn’t resist buying one of the cupcakes with the pink icing and the little green leaf. Not only was it adorable, but it was a super yummy sweet treat. Hidden City Cafe quickly became one of my favourite restaurants in Derry. It’s a great hangout spot to meet with friends over coffee or tea and dessert. I also highly recommend you pop by for lunch (for dine-in or takeaway) as the seitan sandwich was absolutely delicious.

Update: St. Jude Eatery has closed. Unfortunately, I didn’t get to try St Jude Eatery during my short time in Derry, but it’s the first place I’d check out on my return. St Jude Eatery is a vegan/vegetarian restaurant inside The Yellow Yard, a vintage shop with unique finds.

While this isn’t a restaurant, it’s worth of an inclusion to this vegan restaurant guide to Derry. Ursula, one of the owners of Bridge B&B was so accommodating by creating a vegan breakfast for us. She sourced out vegan ingredients and prepared a traditional Irish breakfast, completely plant-based.

It was a vegan breakfast feast and it was so tasty. There was a tofu scramble, veggie bacon, baked beans, flatbreads, porridge and fruit, and mushrooms. I left Bridge B&B feeling happy and full, and ready to continue my adventures around Ireland.

If you’re travelling to Derry and you’d like to stay at a vegan-friendly bed and breakfast, be sure to stay at Bridge Bed & Breakfast.

There are plenty of restaurants in Derry with vegan and vegetarian options, and I enjoyed eating at every place I mentioned above. For a city that didn’t appear to be super vegan-friendly on the surface, there were so many wonderful places to eat in Derry to discover. You’ll have no problem at all sticking to a plant-based diet in Derry.

Here are a few other vegan-friendly, vegetarian, and vegan restaurants in Derry that you might enjoy. I haven’t tried these myself, but you can give them a try and let me know what you think! 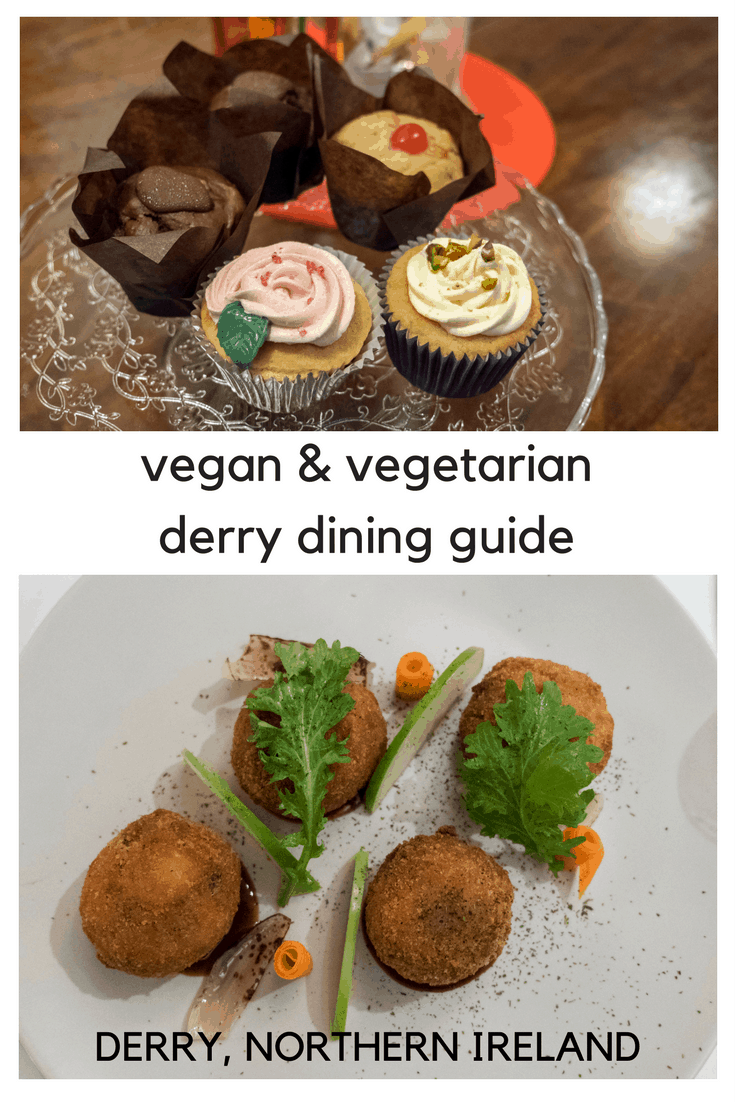 Have you visited any of these restaurants in Derry?