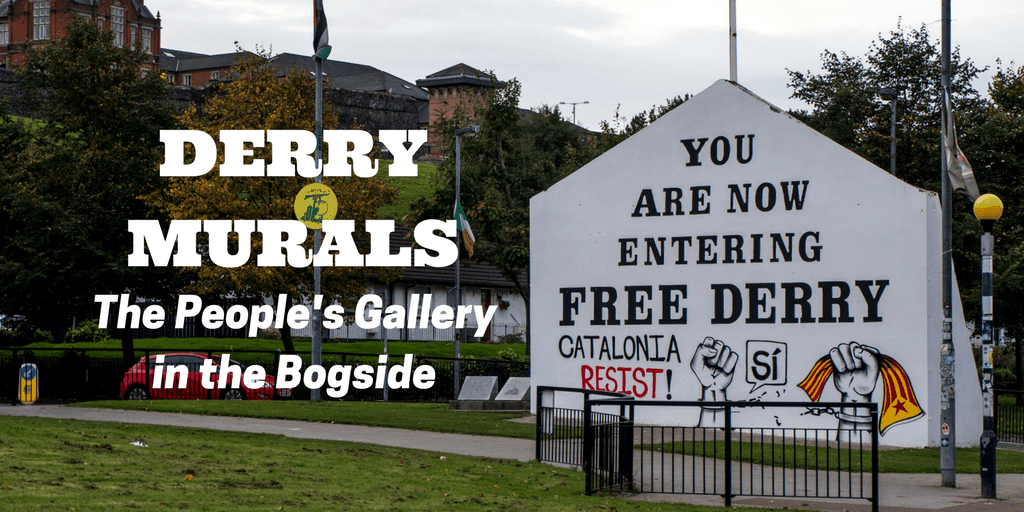 Like many travellers, I adore street art. I seek public works of art, whether it’s a permanent sculpture or an interesting mural. I search down narrow alleyways in the hopes of uncovering splashes of colour on an otherwise barren wall. It could enhance a previously undesirable space or perhaps it’s simply for artistic expression. Regardless, street art draws me in.

Ideally, it might even teach me something about a city or the people that live there.

I admit to not knowing very much about the political, social, and economic struggles of Ireland and Northern Ireland. This history is complex, complicated, and fresh in people’s minds. In some cases, the history is recent. In some cases, it’s ongoing.

The murals here have layers of stories, histories, and deep meanings. With a trip to the People’s Gallery in the Bogside neighbourhood, you’ll gain a better understanding of these issues. And if you’re like me, you’ll be drawn to these powerful images. These are tragic tales. We can all learn from these events to ensure similar situations don’t happen again. 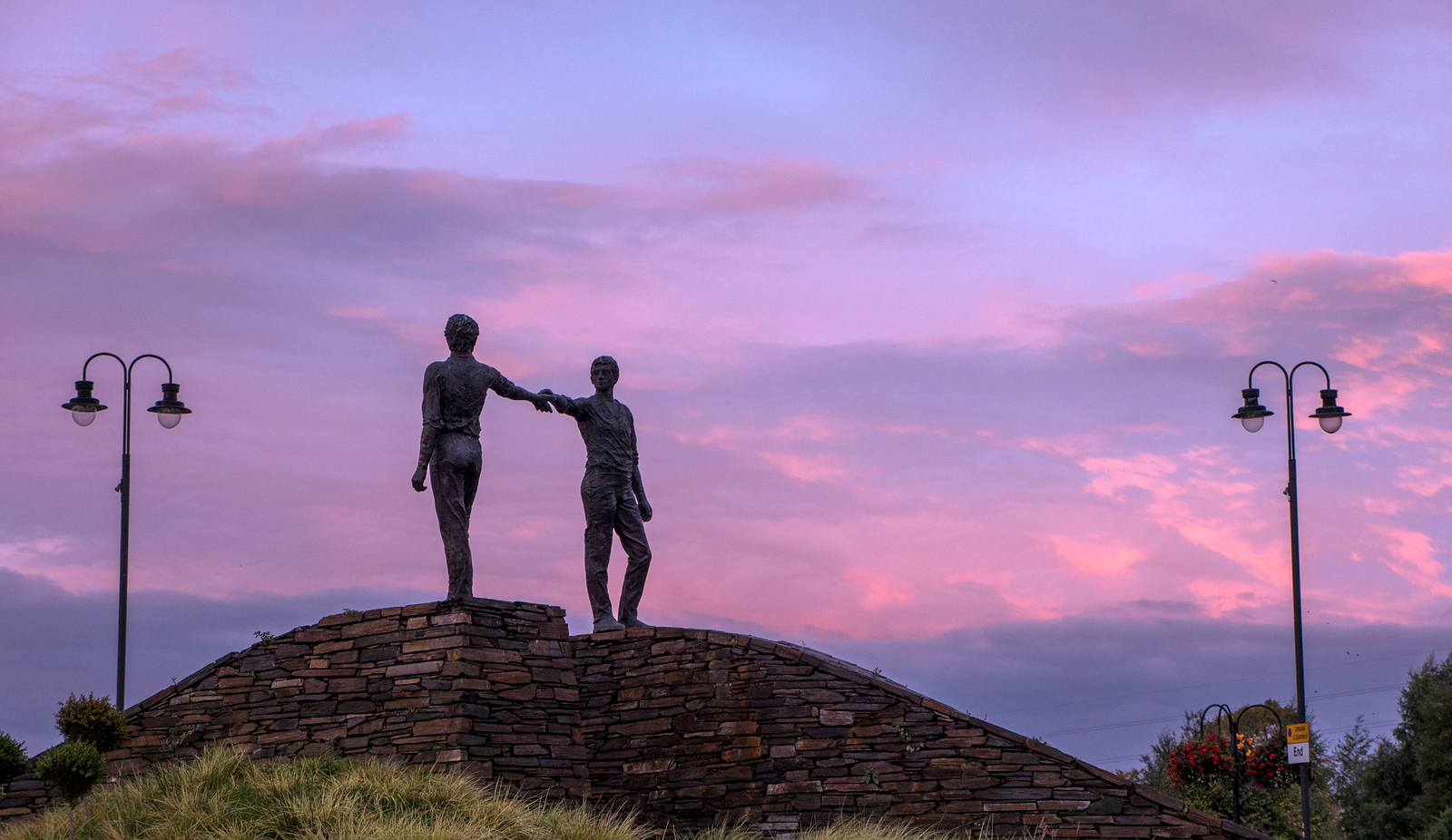 HANDS ACROSS THE DIVIDE

Derry has a dual heritage of Catholic and Protestant; nationalists and unionists. One side wishes to form a united Ireland, and the other side wants Northern Ireland to remain in the United Kingdom. Put into its simplest terms, this was the main conflict behind the Troubles, or the Northern Ireland conflict that started in the 1960s.

As you enter town, you’ll come across these statues in the middle of a roundabout. This work of art is called “Hands Across the Divide.” It was actually right outside of our accommodation, Bridge Bed and Breakfast.

Created by local sculptor, Maurice Hannon, the art was unveiled in 1992 – 20 years following Bloody Sunday. The statue shows two men facing one another with their arms outstretched. Their hands almost touch, but not quite. The men reaching out to one another symbolizes their reconciliation and an aspiration to peacefully live and work together, despite the past. 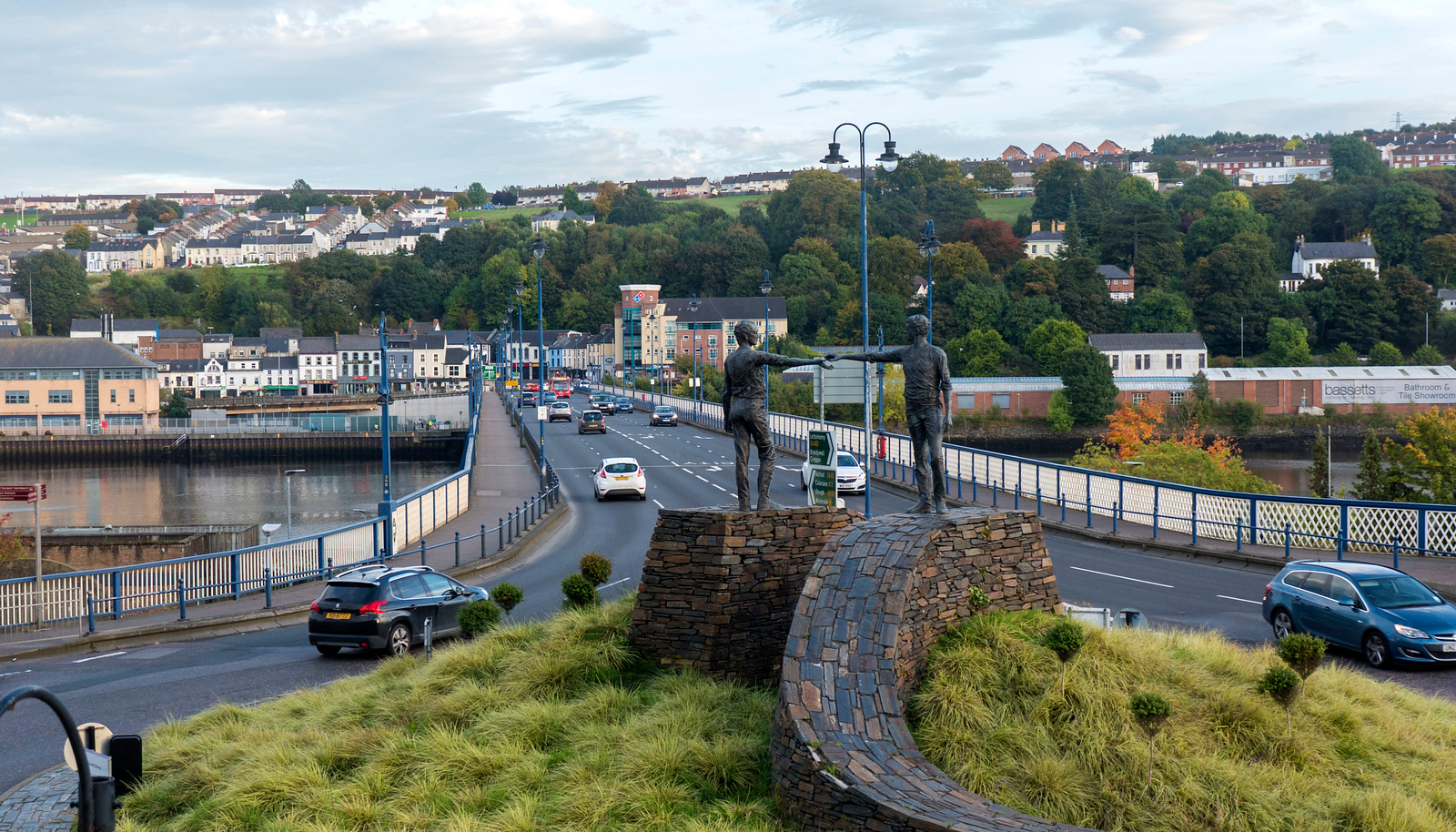 Derry is the only remaining intact walled city in Ireland and the last walled city to be built in Europe. This promenade is approximately 1 mile around the whole city. You can walk along the walls for various vantage points throughout the town.

Along one section of the fortifications, you can see the murals of the People’s Gallery. I recommend checking them out from street level and from the walls for two unique perspectives. 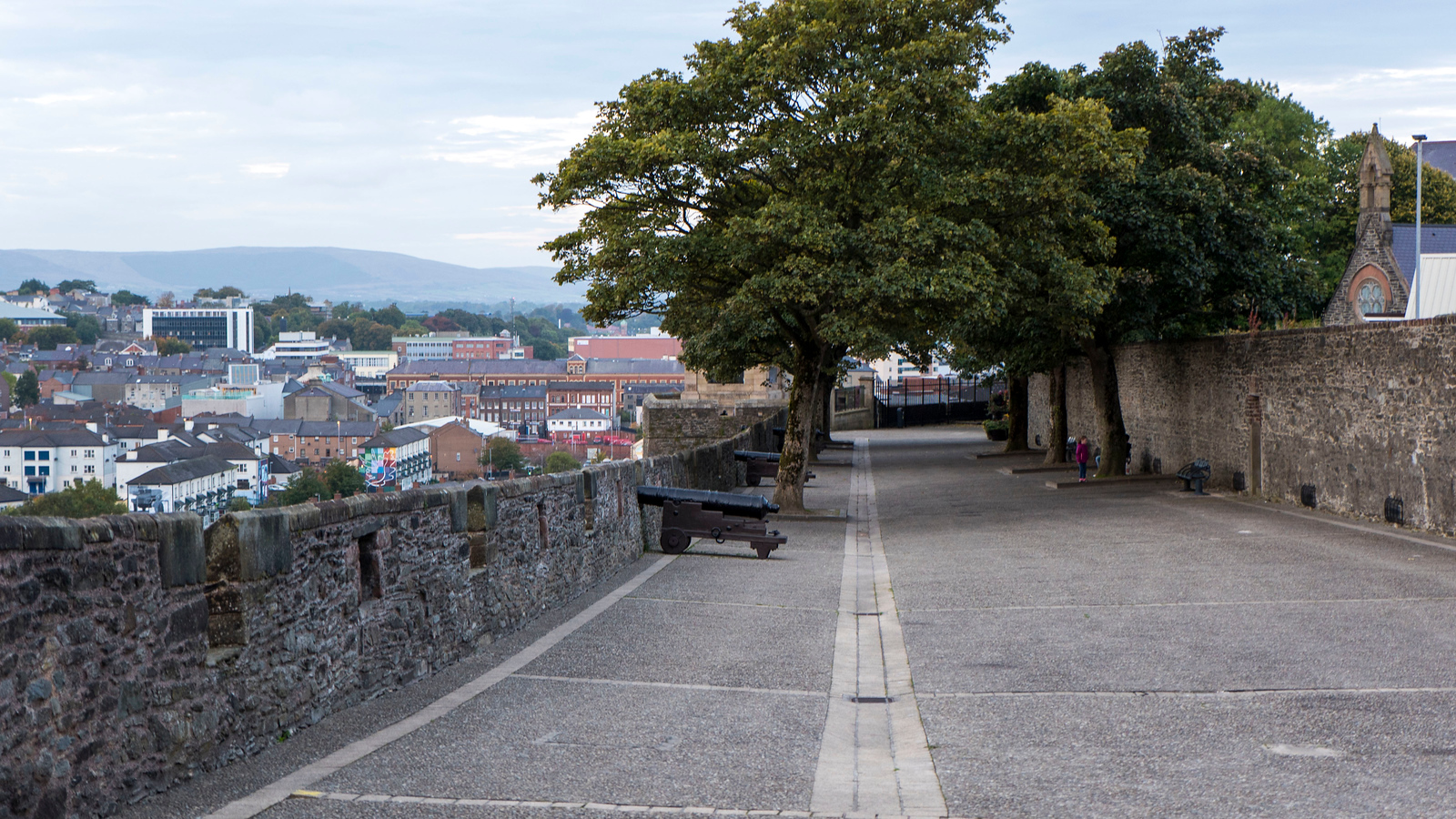 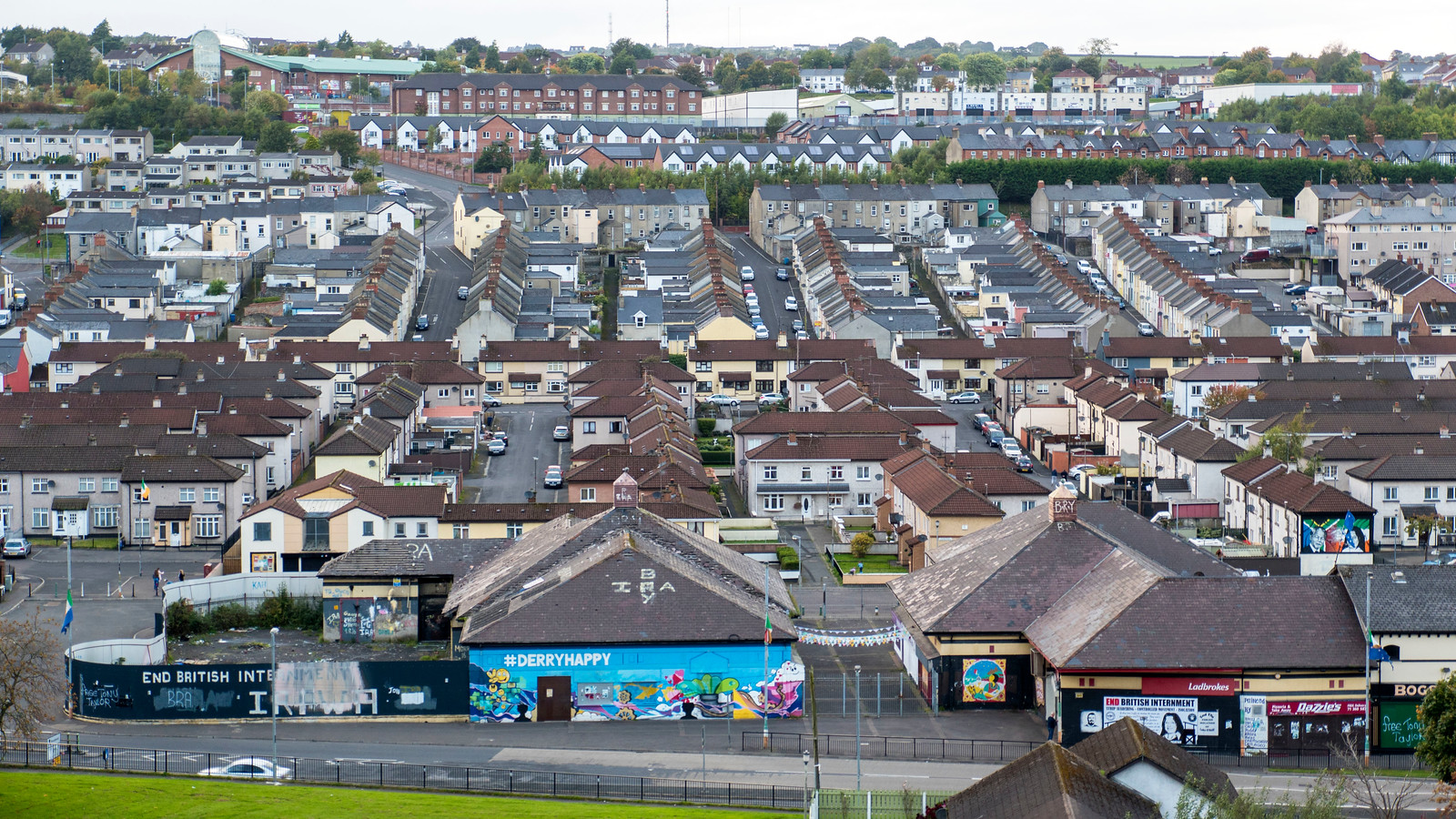 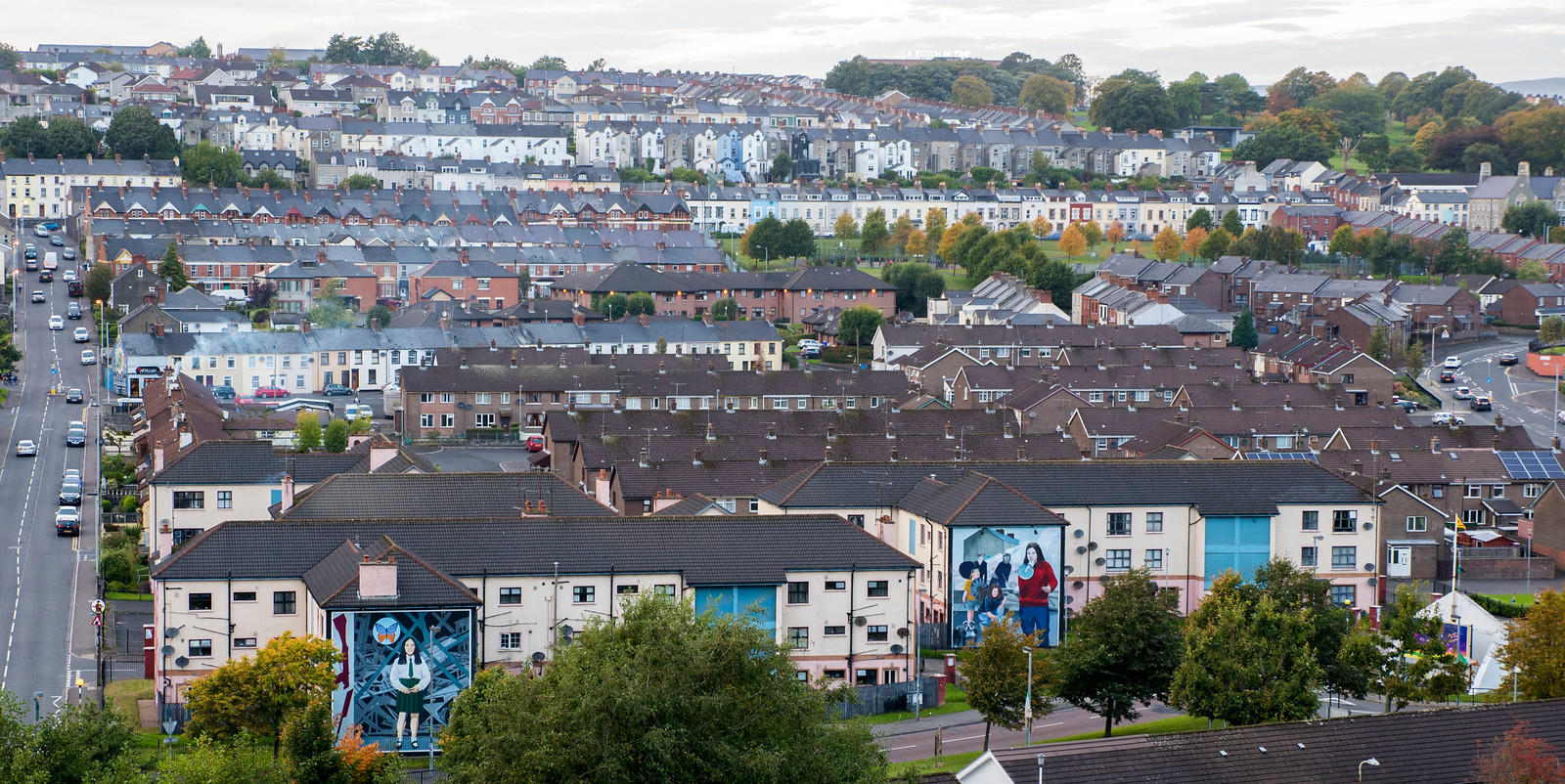 The People’s Gallery is on Rossville Street in the Bogside neighbourhood. These 12 murals were painted by the Bogside Artists, specifically two brothers (Tom Kelly and William Kelly) and their friend, Kevin Hasson. Starting back in 1994, the three men illustrated the events of the Troubles on walls lining Rossville Street.

These political murals were composed to commemorate the events and educate those who didn’t live through these struggles. They showcase the effect of British policies on Irish Catholics, as well as their lack of democratic rights and opportunities.

The art memorializes key events during the Troubles, such as the Battle of the Bogside, Bloody Sunday, and the 1981 Hunger Strike. 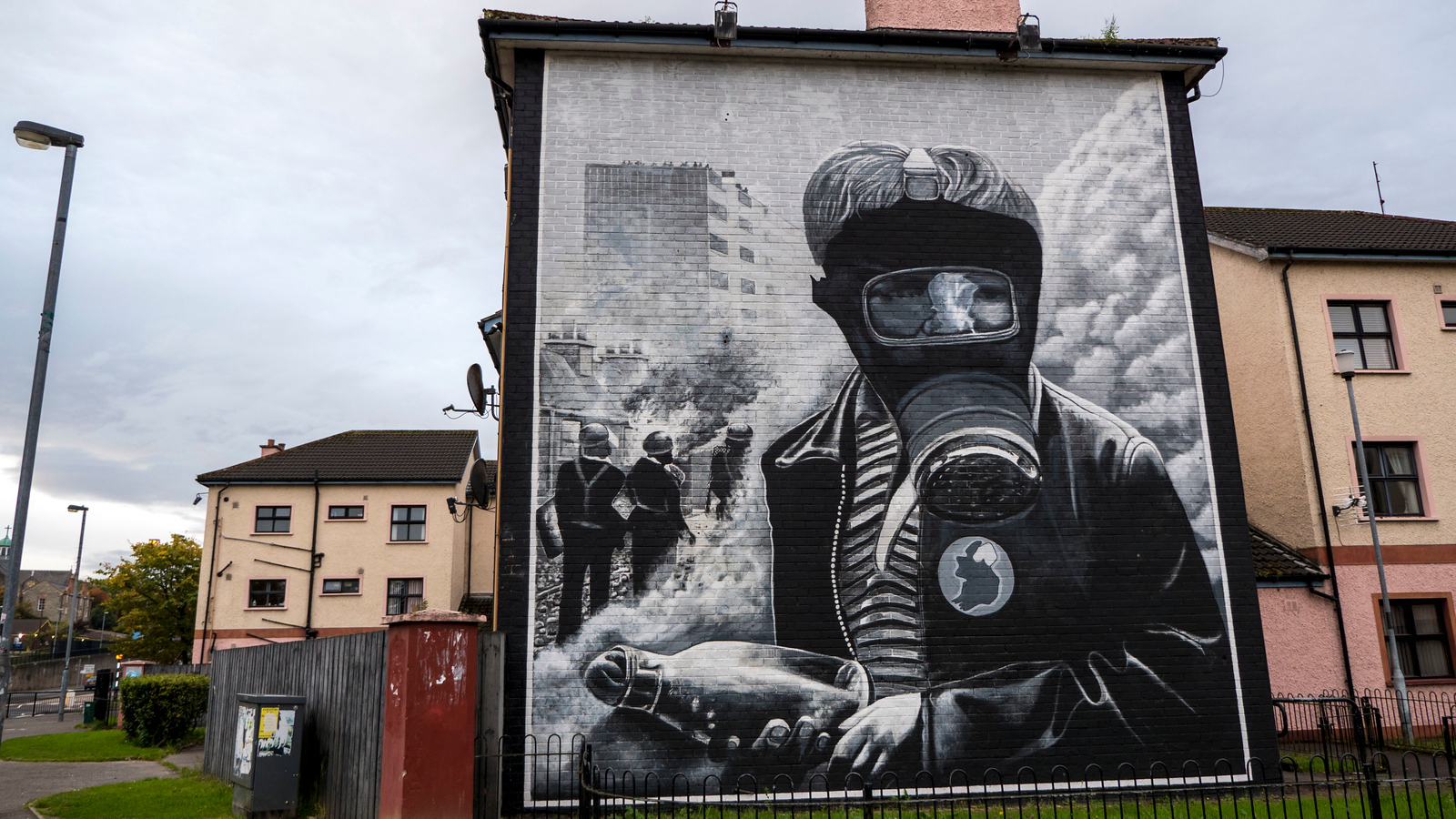 This mural is a scene from the Battle of the Bogside in this area of Derry in August 1969. This is a young boy wearing a gas mask to protect himself while he holds a petrol bomb. 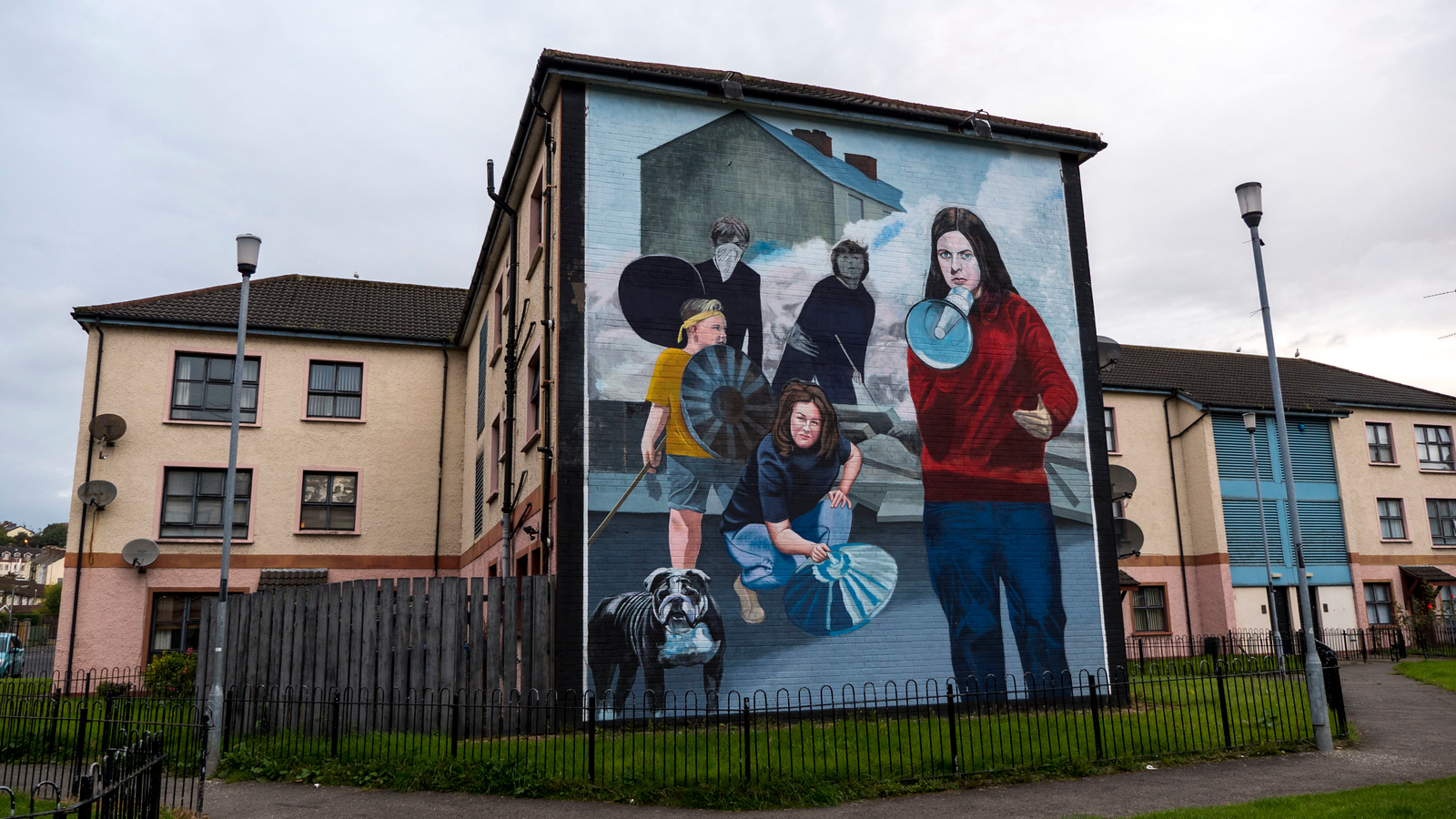 Also from the Battle of the Bogside, this mural features Bernadette McAliskey, a social republican activist addressing a crowd. She received a prison sentence for initiating and participating in a riot. Bernadette would later be elected to parliament at the age of 21. 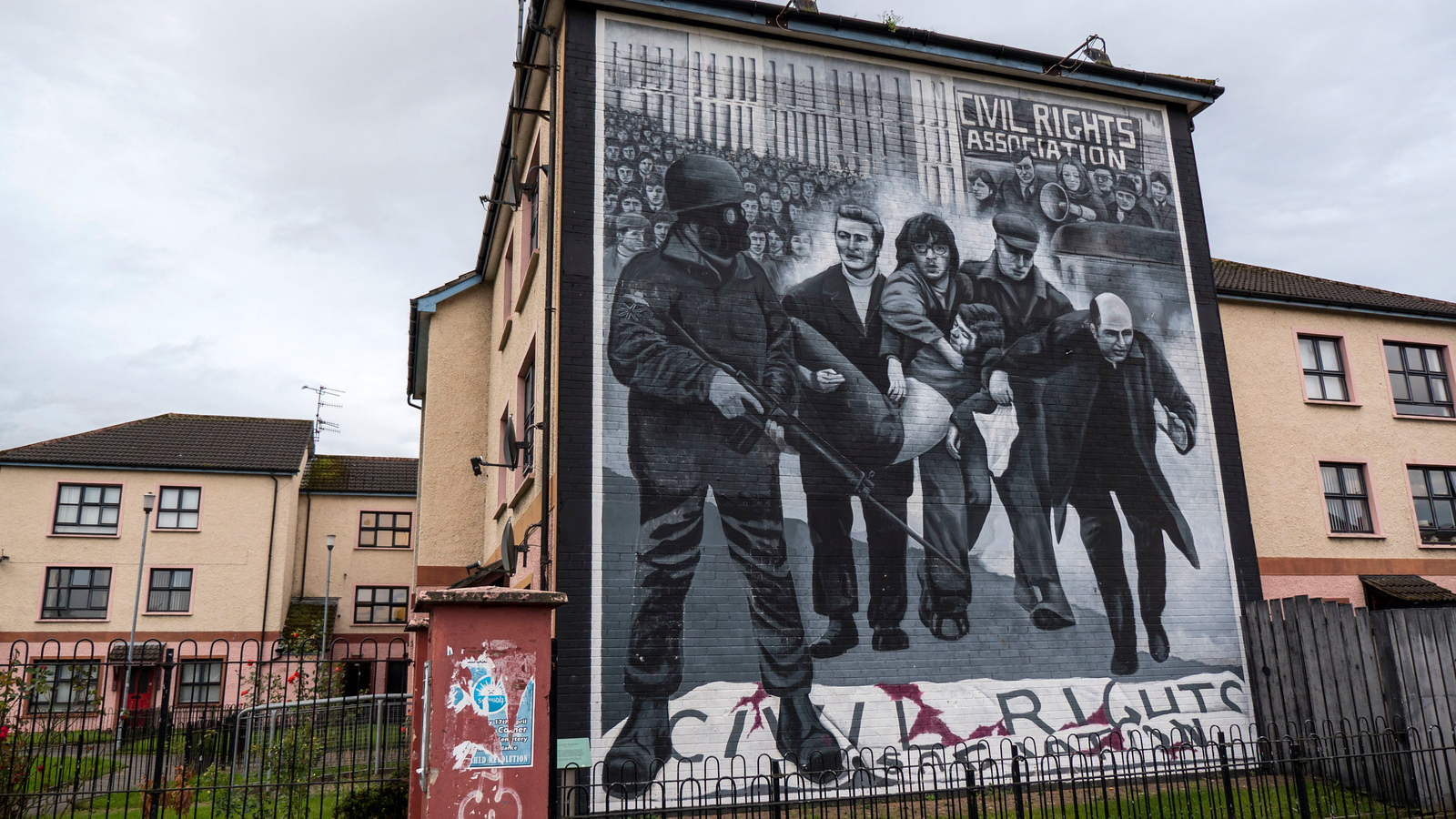 January 30th, 1972 became known as Bloody Sunday in Derry and around the world. The British Army opened fire on a Civil Rights rally and 14 people were killed. This mural shows one scene from Bloody Sunday. A group of men carried the body of Jack Duddy. A civil rights banner is stained with blood. 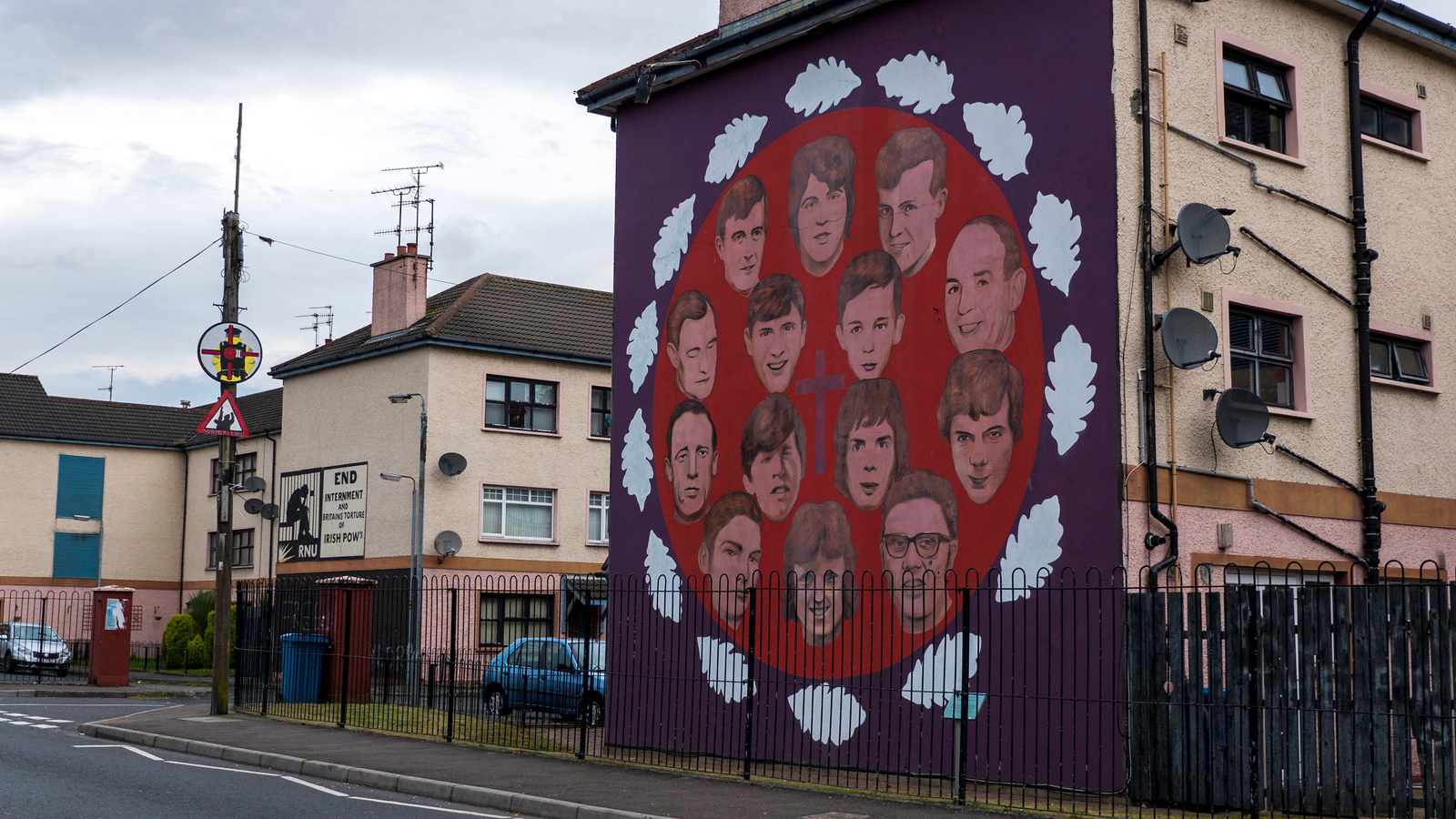 These are the 14 people killed during Bloody Sunday. There are also 14 oak leaves to symbolize the deceased. Derry comes from the Irish word, “Doire” which means oak grove. 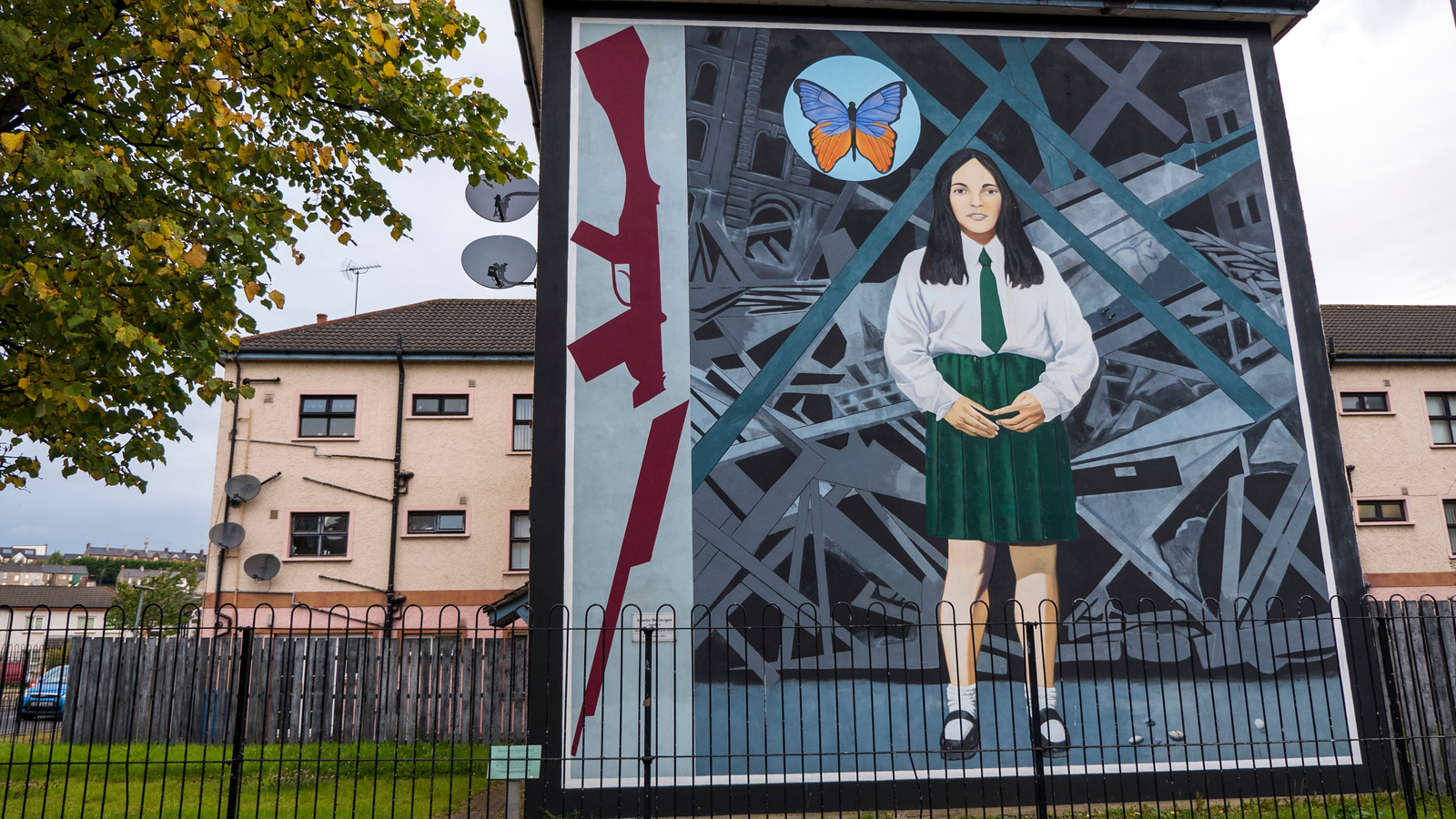 This is the mural of Annette McGavigan, a 14 year old girl who was killed in 1971. The mural is near the site where she died. A British soldier killed her while she stood at the side of the road.

This piece entitled “The Saturday Matinee” depicts a riot scene that became common on Saturday afternoons in the Bogside between 1969 and the early 1970s. 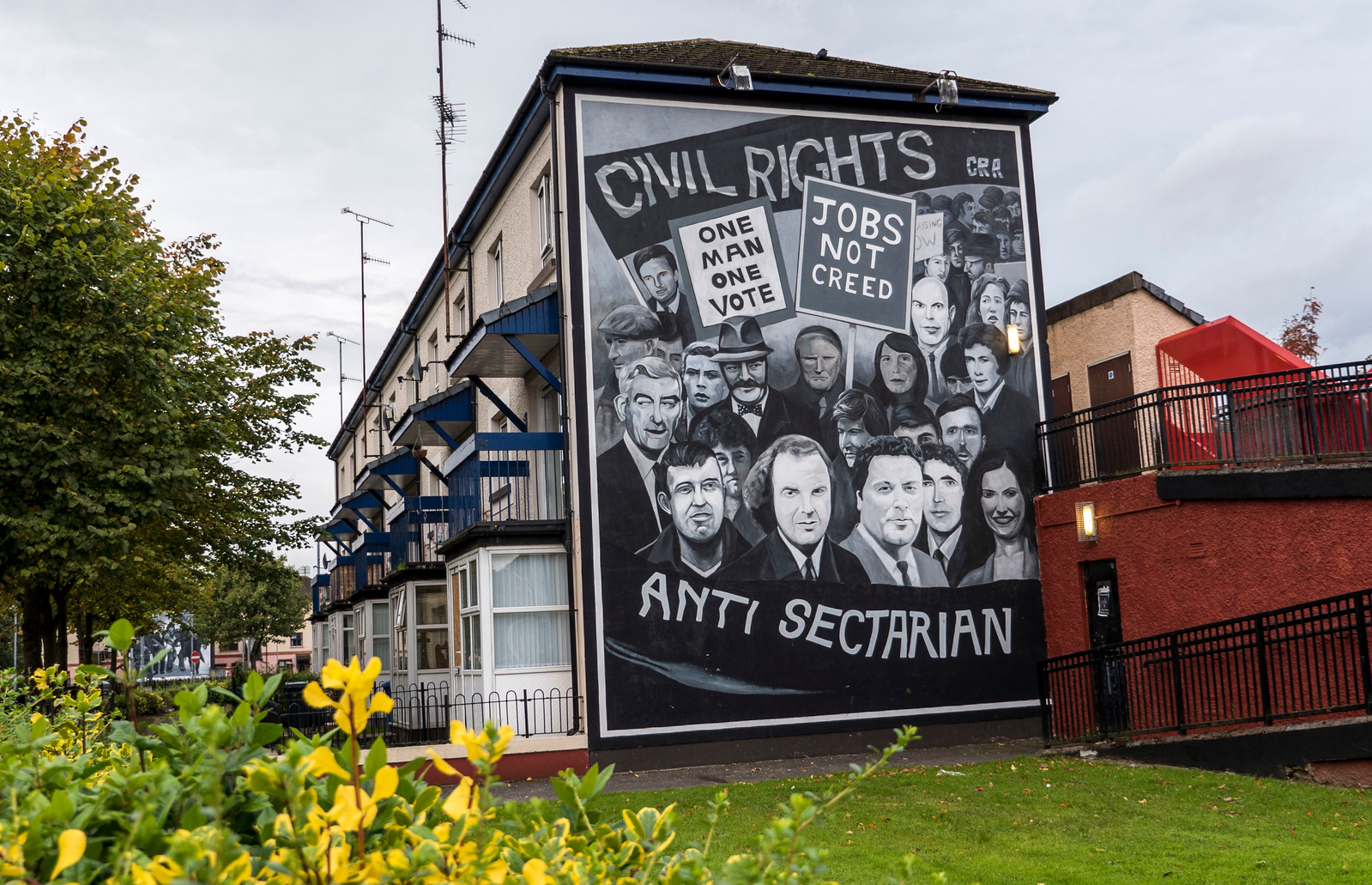 This artwork showcases the struggle for democratic rights for both Protestants and Catholics. These early marches through the streets were inspired by Martin Luther King’s civil disobedience campaigns. 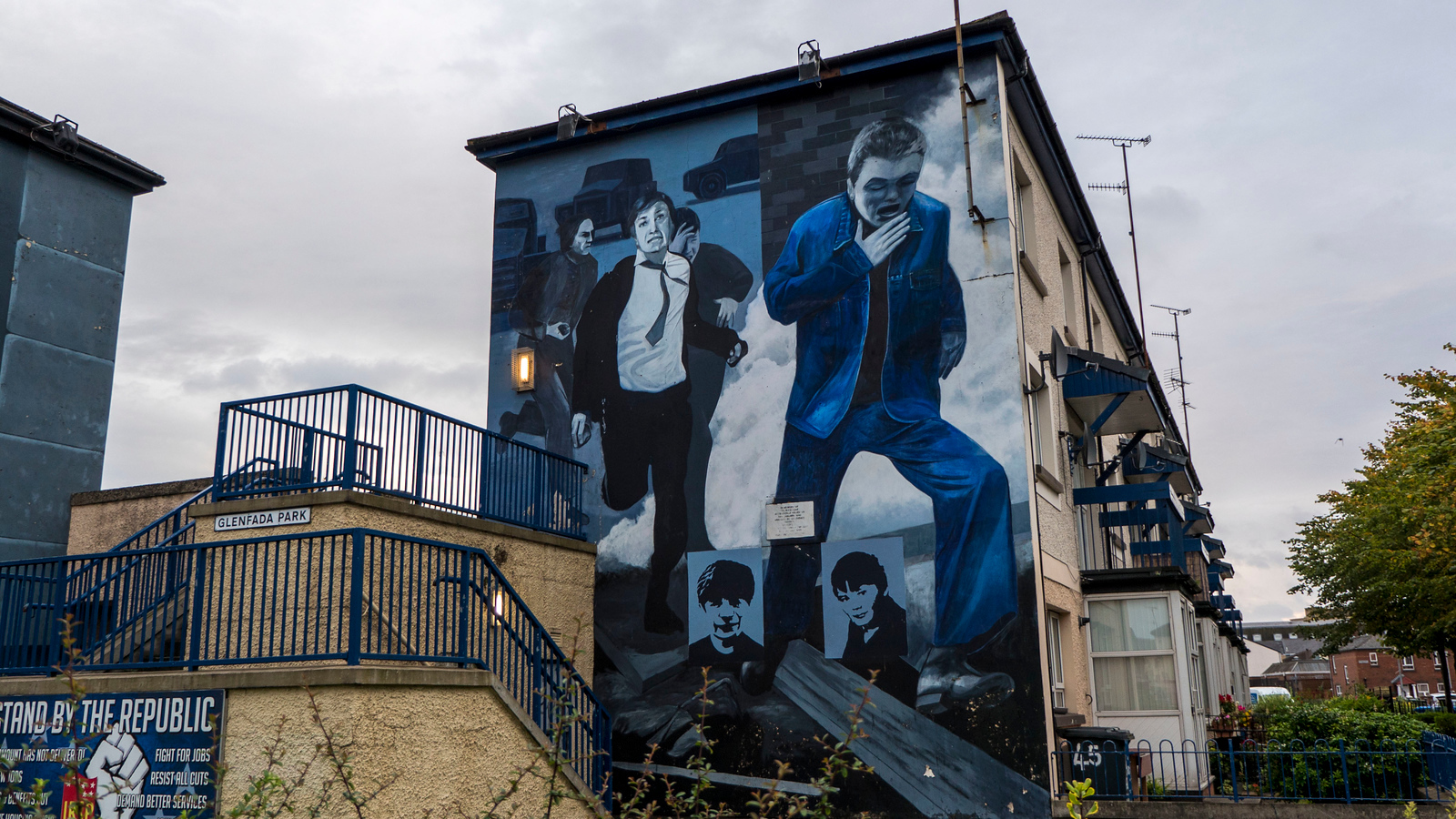 As tear gas was typically used during the Troubles, this mural illustrates a scene where a young boy runs from the gas cloud. The two portraits at the bottom are Manus Deery and Charles Love, two boys killed in Derry.

Deery was shot dead in 1972 at the age of 15. Fragments of a ricocheted bullet struck and killed him. These were fired by a British army sniper from the city walls.

Love, aged 16, was killed in 1990 during a Bloody Sunday commemoration march. The IRA detonated a bomb on the city walls, and flying debris hit Love who stood a quarter of a mile away.

The Peace Mural is a swirling dove, a symbol of peace and Derry’s patron saint, Columba. The Dove emerges from an oak leaf, another symbol of Derry. Squares were selected as they are equal on all sides, representing the equality of citizens. This colourful street art promises hope and a bright future for Derry. 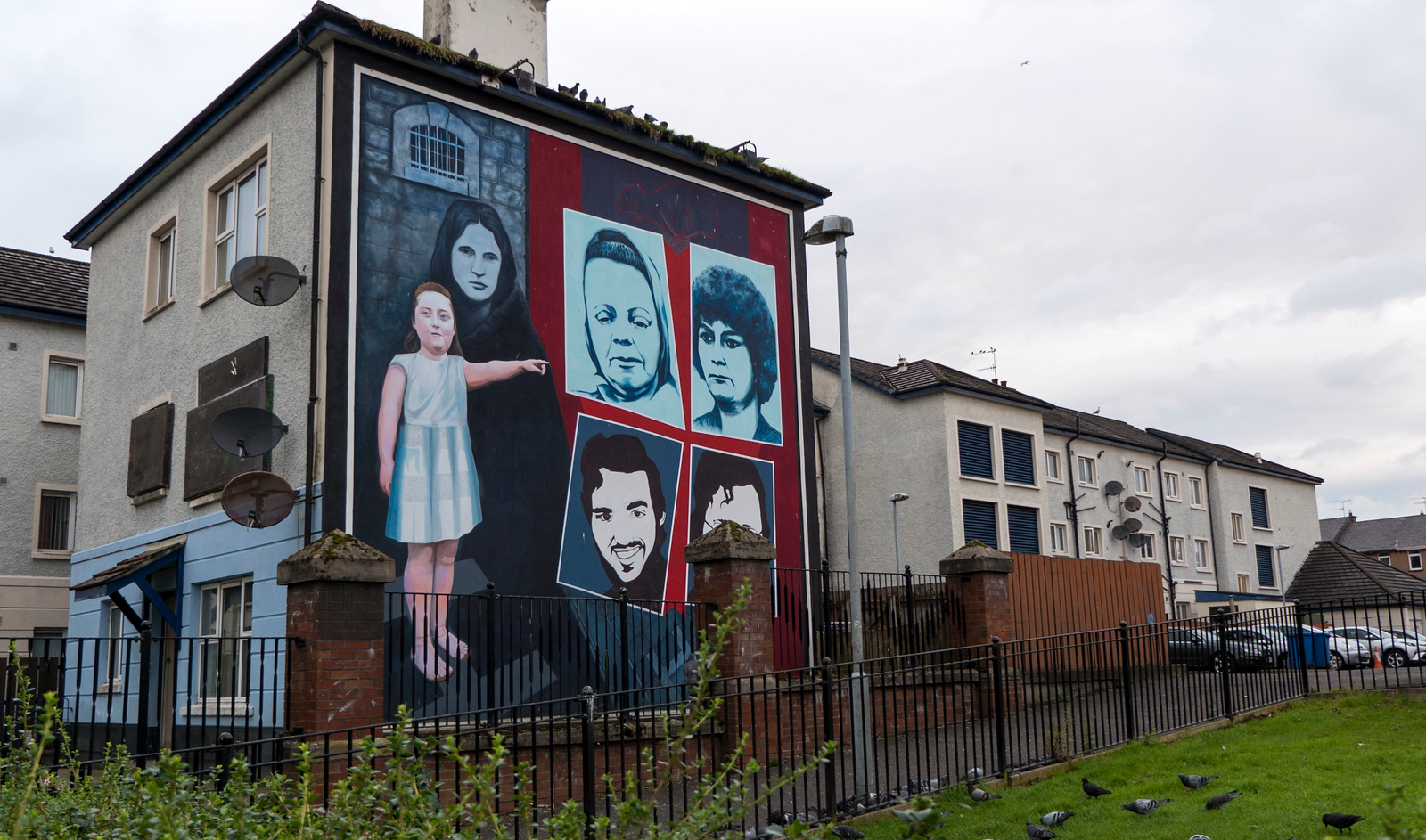 Peggy O’Hara was the mother of INLA hunger striker, Patsy O’Hara. She stood in assembly elections in 2017 as an independent, and she was very active in republican and socialist groups. The young girl on this mural points towards the dove in the Peace Mural.

There are so many other murals around Derry, whether they’re political, optimistic, celebrating the city, or merely artistic. Here are a few more Derry murals that I found. 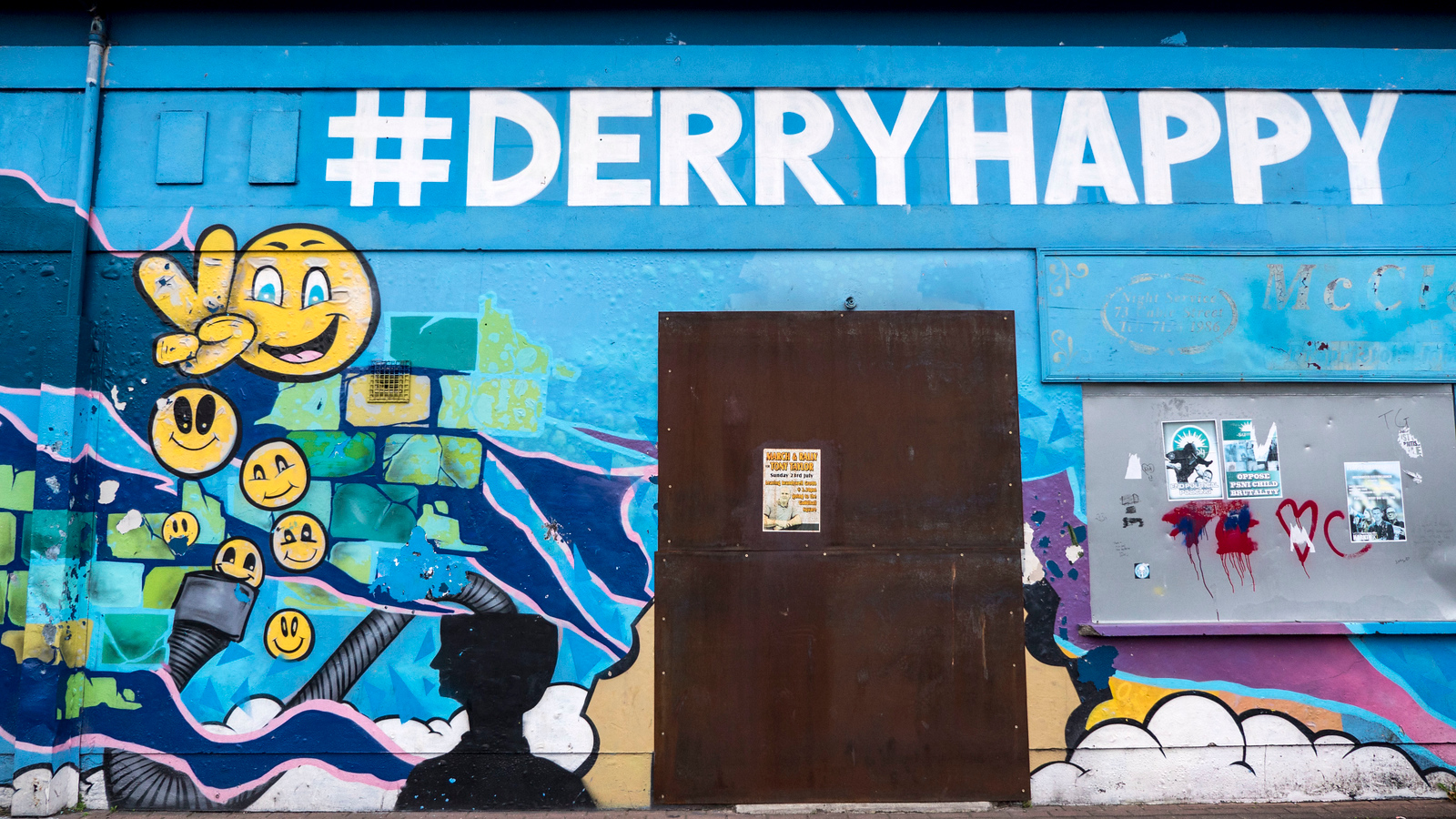 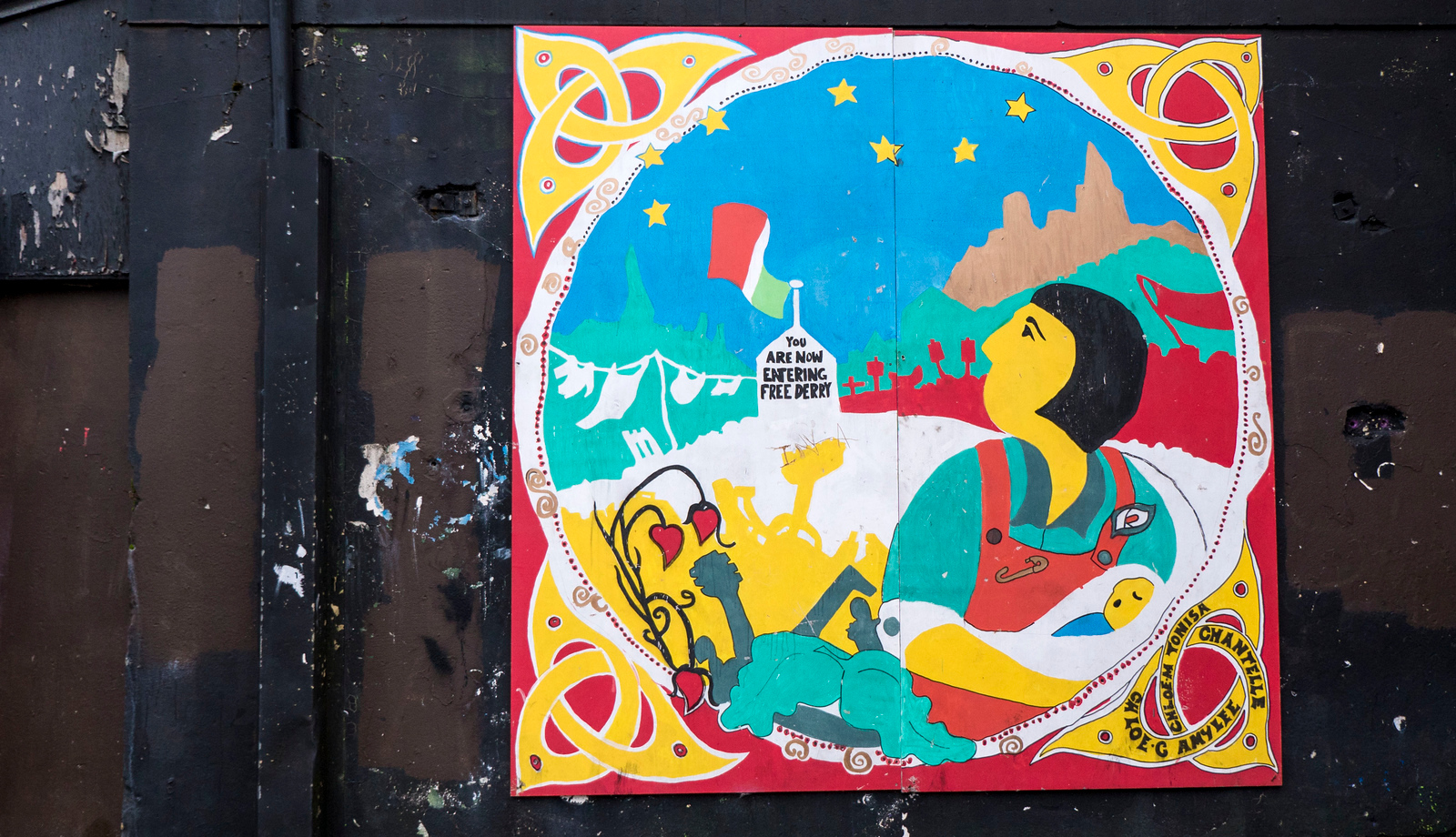 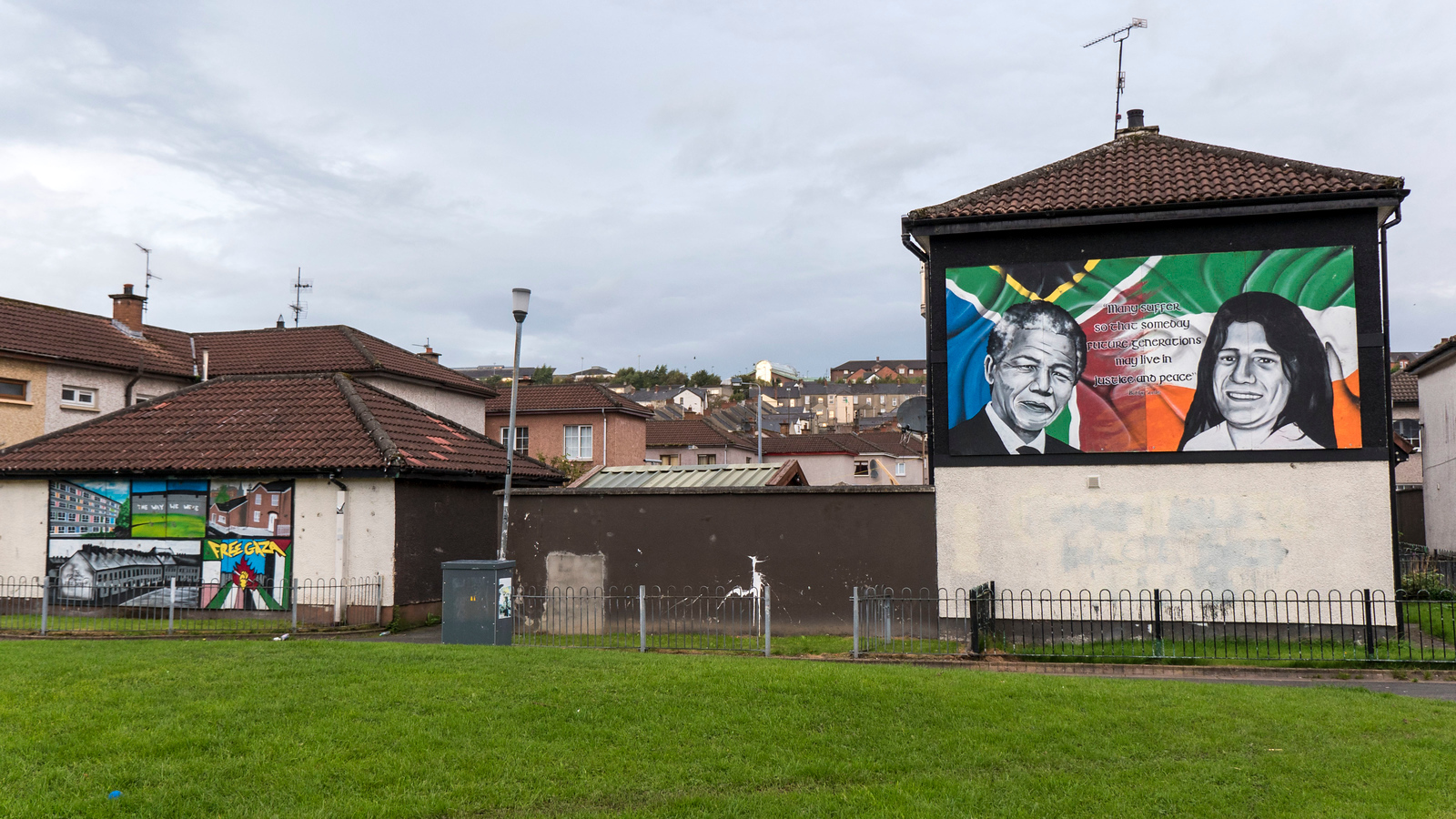 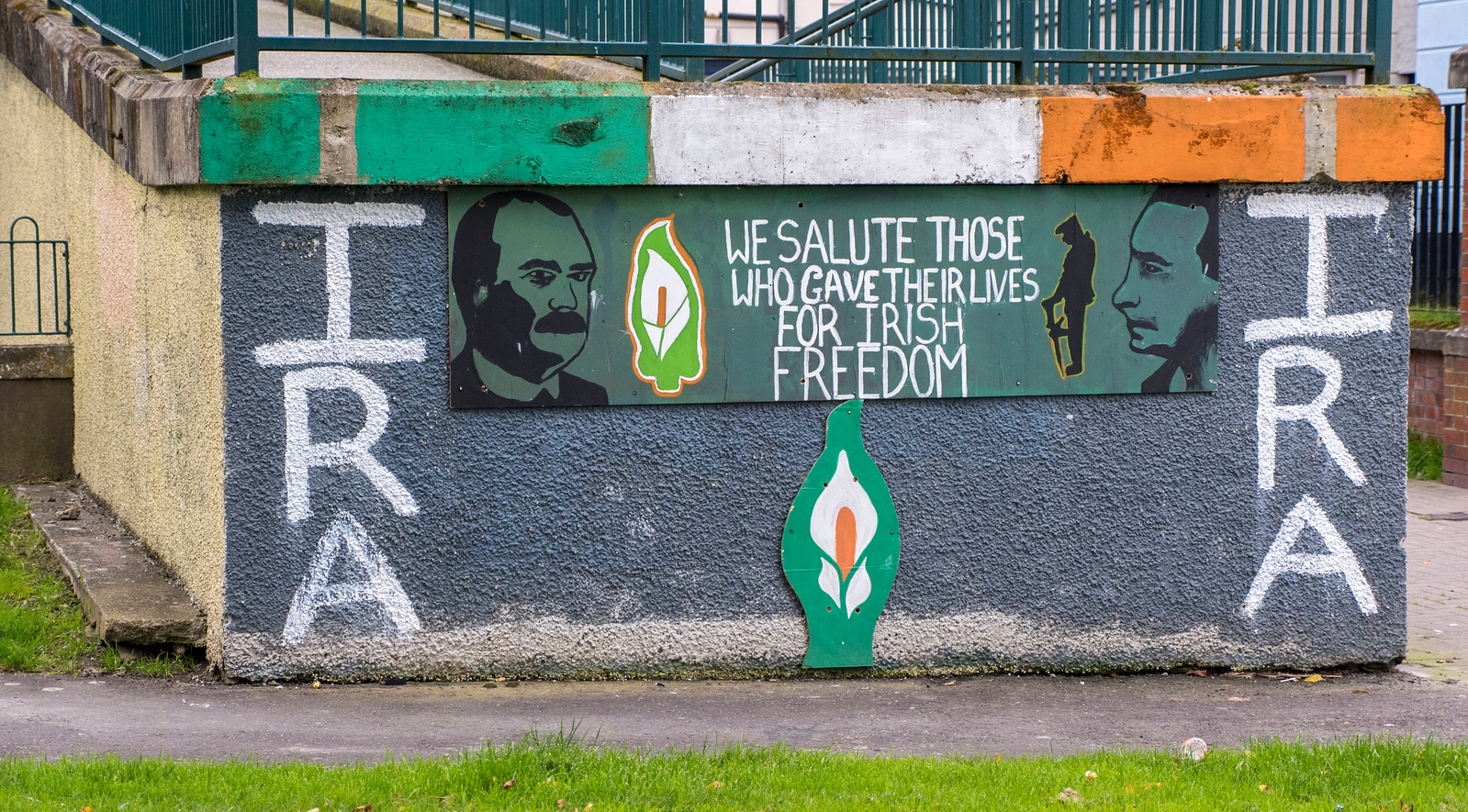 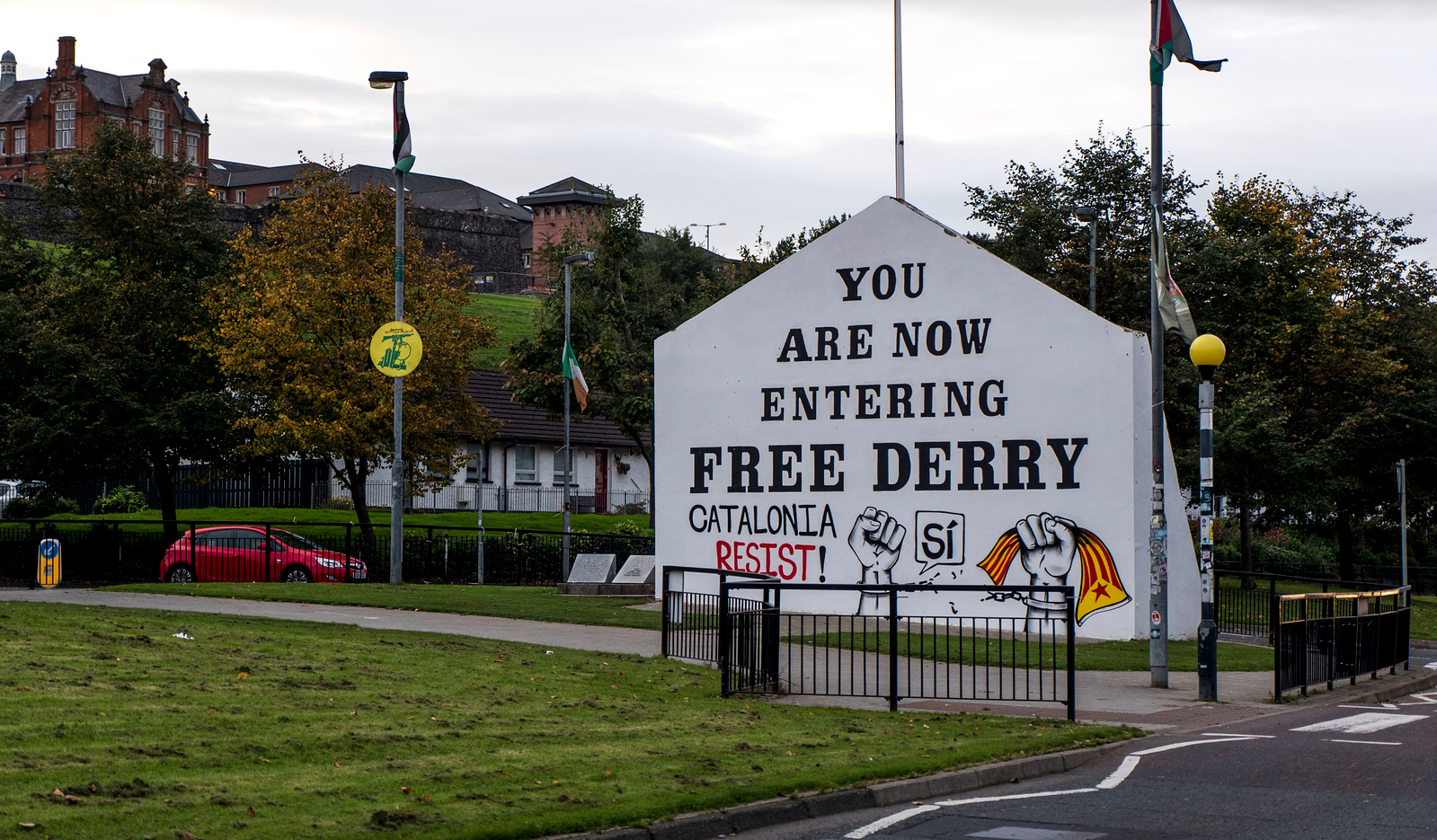 While observing and reflecting on the Derry murals, you won’t miss the sign at the Free Derry Corner. This historical landmark is a free standing wall that used to be attached to a row of homes. It commemorates Free Derry, a self-declared autonomous nationalist area of town from 1969 to 1972. It’s frequently repainted and includes messages from time to time regarding other current movements. 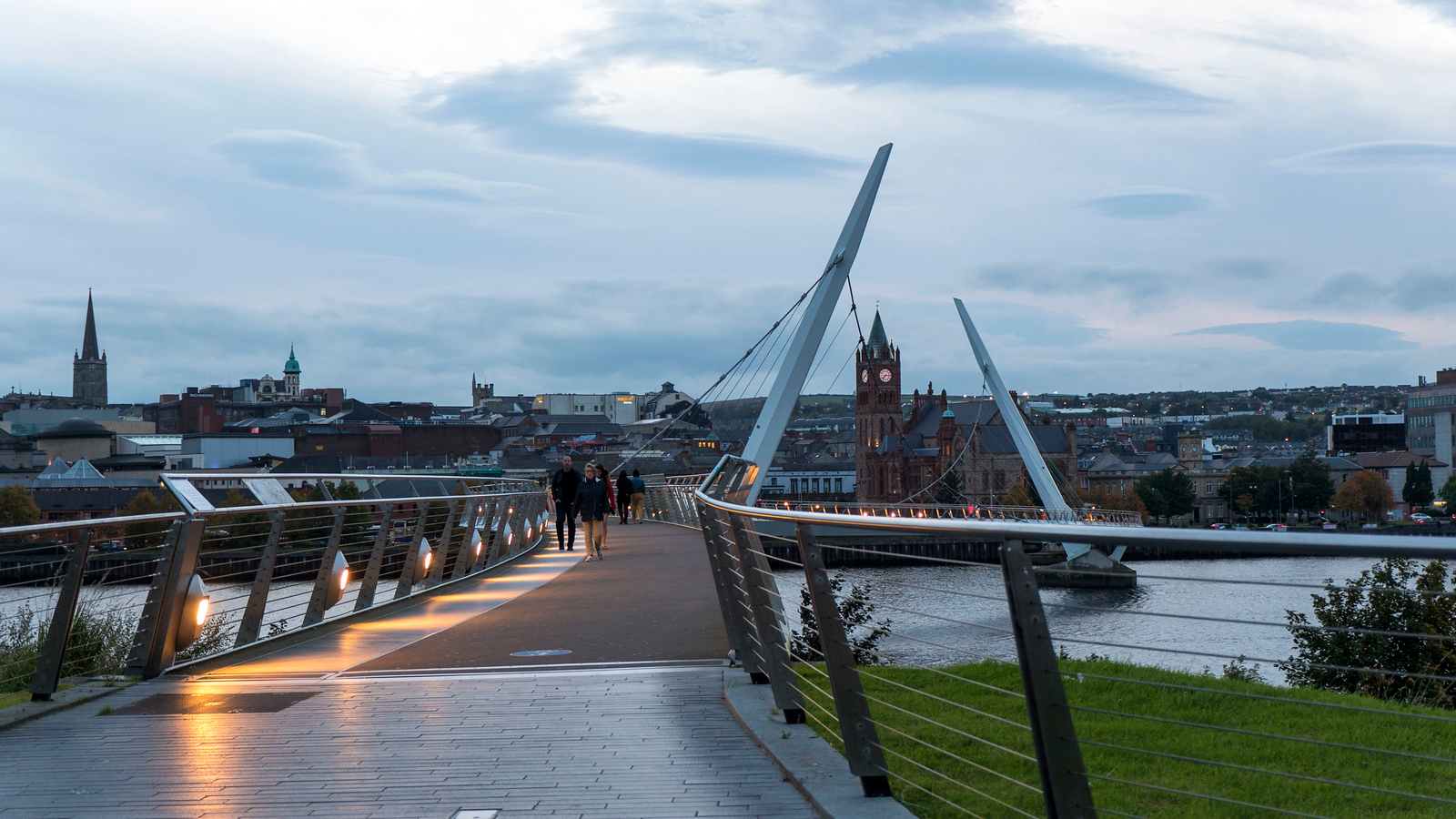 The Peace Bridge in Derry opened in 2011. It’s a pedestrian bridge across the River Foyle. The structure symbolizes bridging the gap between two divided communities. With two neighbourhoods separated by this river, the Protestant Waterside and the Nationalist Bogside, the bridge represents a handshake between the two. The bridge allows people to move back and forth with ease, and embodies a triumph of adversity.

The Derry Peace Flame is one of 15 peace flames around the world. It’s Ireland’s only eternal peace flame in a city that strives for harmony. This peace flame is inside a small park beside the Guildhall in the middle of town.

Interested in seeing more photos from Derry? Check out our travel photo album. You can even purchase prints, housewares, and so much more made from our photographs!

As you can see, Derry has a complex and violent past, yet the citizens and community are striving for a peaceful resolution. The People’s Gallery and the Derry murals helped me understand a piece of this history. Great art inspires thought and reflection. After enduring so much, I’m glad that there is so much hope and peace in Derry.

We stayed at the charming accommodation, Bridge Bed & Breakfast. You’ll stay in a comfortable room right in the middle of town, and even get a home cooked meal in the morning. Catering to any dietary restrictions, vegans, and vegetarians, your delicious breakfast will be lovingly prepared.

Check out my full review, the reviews of other trusted travellers, and book your stay today. 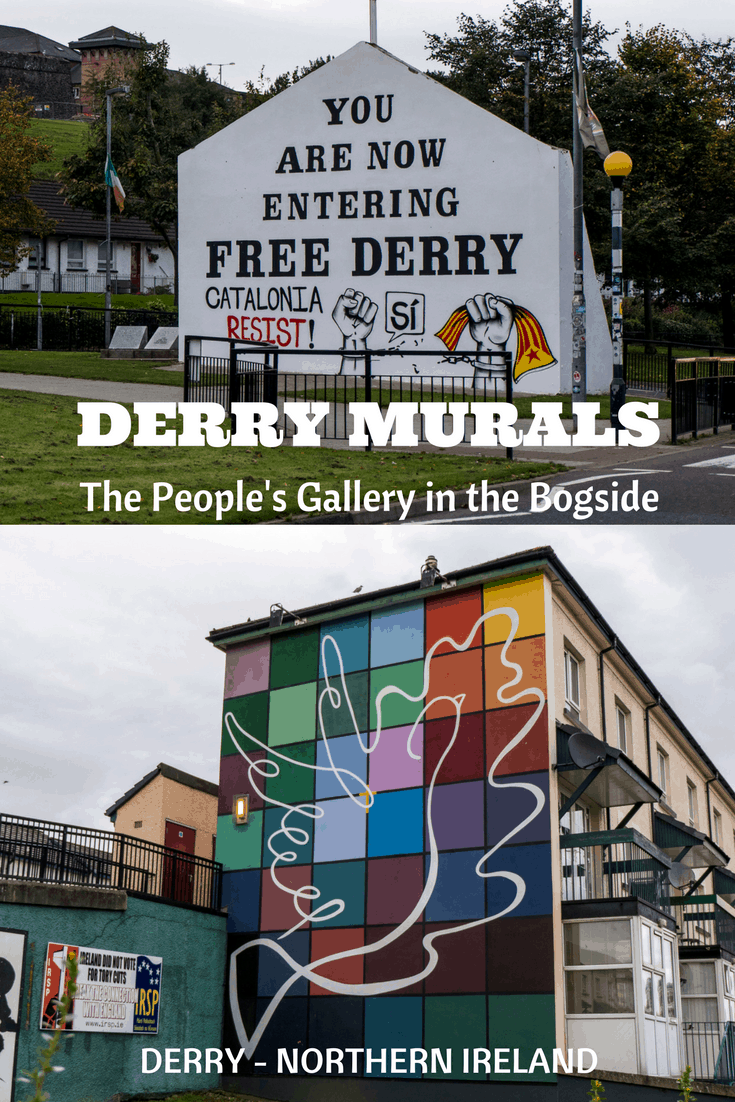 Where is your favourite street art in the world?

Hi folks Tragic our past has been I know if I lived among these historical works of art I would face them towards the direction the mayhem originated . In the not so distant future the trees will obscure the view from that direction . There can only be more to this story I hope it will be positive with the art of peace.

breathtaking pictures. I loved them. Thank you for sharing

Really loved these artworks. Nowadays it has become a trend to adorn cities with such arts but most of them come without and context or relation to the city's heritage. But this is an exceptional case where they have been able to make a strong political statement through their art!

Street art and public art of any form is fascinating anywhere in the world. It is a mirror of the times and culture of the place. Many a time it is also an expression of the collective angst of the place. The mural of Bloody Sunday and Death of Innocence are so poignant and bring a lump to the throat.