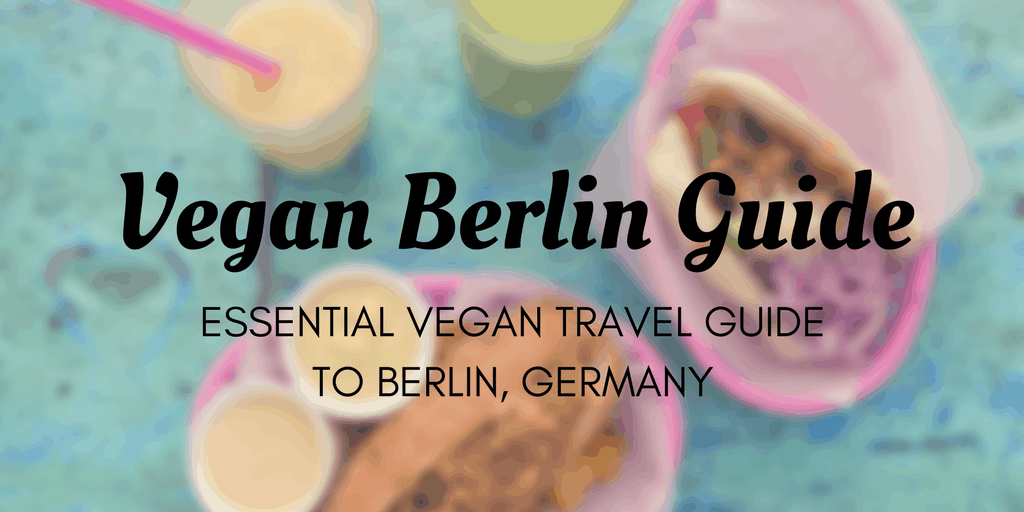 It’s easy to be vegan in Berlin! An essential vegan Berlin travel guide.

Did you know that Berlin is considered to be the vegan capital of the world? That’s right, veganism is taking over the German capital city. When Justin and I traveled to Berlin, we could easily see why that was the case. Whether we were walking around the neighbourhoods of Friedrichshain, Prenzlauer Berg, Mitte, or others, there were numerous signs with “vegan” on them. On signs in front of restaurants or store front windows, it seemed as though every establishment was advertising a vegan or vegetarian meal.

So, you might be wondering, why do I need a vegan Berlin guide if there’s an abundance of places to eat vegan meals all over the city? With a vast array of options, it sometimes becomes even more difficult to decide where to go, where to stay, and what to eat.

When I was growing up as a vegetarian kid, we rarely ate at restaurants as there simply weren’t any options (other than French fries, spaghetti with tomato sauce, veggie pizza, and grilled cheese sandwiches, which is what I ate at restaurants as a kid). When I went vegan about 10 years ago, finding a vegan meal at a restaurant was incredibly difficult.

When I dined at Fresh, a vegetarian/mostly vegan restaurant in Toronto for the first time, I was in disbelief that I could order anything I liked off the menu without having to worry there were any animal products in my meal. Travelling to Berlin is like reliving that first glorious experience over and over again, across the entire city.

In Berlin, I had the same problem as every omnivore in the world. It’s not “where can I eat,” it’s “where do I want to eat”.

It’s a good problem to have.

If you’re traveling to Berlin for only a few days like we did, you might be overwhelmed with the choices. As a blogger and travel planner (especially when it comes to food options), I mapped out every vegan restaurant in Berlin that I wanted to try. Furthermore, we stayed at a vegetarian hotel in Berlin with a vegan breakfast buffet. I was even able to find an all vegan grocery store to pick up snacks and essentials.

I’ll start with the vegan restaurants in Berlin. When I’m travelling, food is primarily on my mind. I swear that half of my day will be spent exploring a city, and the other half will be thinking about where I’m going to eat next. With three days in Berlin, we had a lot of ground to cover and managed to visit quite a few vegan and vegan-friendly restaurants in Berlin.

Emma Pea was the first vegan restaurant in Berlin that we visited, and we weren’t disappointed. In the hip Friedrichshain neighbourhood, Emma Pea is a must visit spot for vegan street food, junk food, and comfort food. It’s also a bar so you can indulge in some cocktails, beer, and cider.

The menu choices are written on a chalk board above the counter where you place your order. They specialize in burgers, so I ordered the Thai Pea Burger with sweet potato fries. Justin got a quesadilla with sweet potato fries, and we split an order of homemade nachos. As you can imagine, it tasted even better than it looked (and it looks pretty darn good).

If you’re looking for satisfying and not so healthy vegan food, be sure to head to Emma Pea for dinner or snacks.

Chaostheorie is Berlin’s first 100% vegan cafe and cocktail bar. They’ve got tons of treats, both sweet and savoury. While it was difficult not to order one of everything, Justin settled on the pulled mushroom burger, and I ordered a hot dog with potatoes and two dips. We also ordered a couple of smoothies.

The restaurant also specializes in vegan coffee, milkshakes, and cocktails. Although we went in the middle of the day for lunch, this place looks like it can get pretty exciting at night, judging by some of the photo booth pictures on the wall! Yes, there’s a photo booth in the restaurant, and as for the pictures…you’ll just have to see them for yourself.

Chaostheorie pretty much proved this song I’ve heard, Everything you can eat, I can eat vegan!

In researching this article, I realized that the main store location for Eiskontor Berlin has closed. It’s a shame because their ice cream was absolutely delicious. Eiskontor Berlin is an all vegan ice cream shop, and you’d never know the difference between theirs and the dairy versions. It was something I’ve never experienced since going vegan – walking into an ice cream shop and being able to choose any flavour!

However, Eiskontor Berlin will continue to serve up their vegan ice cream in several places all over Berlin. They also might open a pop up shop or another retail store in the future. Look them up on Facebook before you travel to Berlin so you can seek them out.

Bamerang is a vegan rock cafe and pub with great food and awesome music. If you love to drink beer, eat yummy food, and enjoy classic rock tunes, this is the place for you. We loved it. There was rock paraphernalia adorning every space of wall. The service was excellent and they served up some tasty bar fare.

We ordered beer, nachos, and garlic bread. These were all great life choices.

While this restaurant didn’t show up on my radar initially, we were introduced to it as a lunch stop along our Berlin Bike Tour. Not exclusively vegan, Wahrhaft Nahrhaft has a ton of vegan options in their display case, all clearly marked. It’s a fantastic lunch spot with bagels, sandwiches, salads, and smoothies. There’s also cake if you’ve got a midday sweet tooth. My seitan bagel and elderflower/orange/ginger iced tea hit the spot.

The interior has a retro charm, although we dined out on the front patio as it was a beautiful day. The fact we sat outside also led to an interesting event where Justin helped a random stranger pump water from an old fashioned device across the road.

Let It Be is a vegan creperie and burger bar. Sounds like a great combination, right? Although we didn’t get to have a full meal at this cute cafe due to full bellies, we wanted to give it a try as we’d heard so many great things.

Justin and I split a bowl of their mac & cheese and it was warm and comforting. They also feature pancakes, burgers, and crepes named after famous vegans, which I thought was a really fun idea. We hope to return someday to try out the Thom Yorke burger or the Miley Cyrus pancakes.

Sfizy Veg is an authentic, Italian pizzeria in Berlin that’s gone completely vegan. There’s an extensive menu of pizza pies topped with your favourite meats and cheeses, except it’s all plant-based. Sfizy Veg is right down the street from Let It Be, so feel free to combine a visit to both restaurants if you’ve got the appetite.

Justin and I decided to stick to the classic margarita pizza, just because it had been so long since either of us had enjoyed a vegan version. These thin crust pizzas topped with basil, tomato sauce, and cheese reminded us of the ones we’d had in Italy, except they had vegan cheese on them (not something we easily found in Italy).

Yes, Berlin has entire grocery stores that are vegan. It’s amazing to walk into a grocery store and be able to purchase anything on the shelves without checking the labels for hidden animal ingredients. Veganz grocery store has the most extensive selection of vegan fresh and packaged goods that I’ve ever seen in one place. They even have their own line of unique line of vegan products and snacks.

Veganz has three grocery stores in Berlin and one small shop inside the PURO cafe in Prague.

As you can imagine, I was pretty excited when I first entered Veganz for the first time. I went live on Facebook when I arrived at the grocery store to give everyone a glimpse of the magical world I was entering. Take a look at my live video in Veganz so you can see it for yourself.

To make this vegan Berlin travel guide even more complete, we stayed in a vegetarian and vegan-friendly hotel in Friedrichshain. Almodovar Hotel is vegetarian, mostly vegan, eco-friendly, and focused on sustainability. With a huge vegan breakfast buffet, Almodovar is the best place to stay in Berlin, hands down!

We spent three nights at Almodovar Hotel and got to try new items every day at breakfast. The buffet included: two kinds of tofu, a Muesli cereal, homemade cashew cheese, prepared faux meats like seitan and vegan chorizo, lentil salad, rice salad, vegan currywurst, tofu scramble, bread, muffins, and croissants. The vegan croissants were the highlight of the buffet for both the two of us, and we ate them daily.

VEGANISM IS THRIVING IN BERLIN

From vegan restaurants to vegan grocery stores and even vegan hotels, it’s so easy to visit and live in Berlin as a vegan. Plant-based options keep getting better and better, and it seems as though something is available at nearly every restaurant in Berlin.

Take a look at even more photos of the delicious vegan food we ate in Berlin!

While you could travel to Berlin without looking up any vegan restaurants in advance, it’s always a good idea to check out the best ones if you have a limited amount of time in the city. I highly recommend every vegan, vegetarian, and vegan-friendly establishment we visited in Berlin. We only wish we were able to stay in the city longer to eat even more food (and check out more of the city, of course!). Until next time, Berlin….

More Things to Do in Germany

Justin and I LOVE visiting Germany and we always have a fantastic time exploring this beautiful country. Here are some other articles about our trips to various cities and towns in Germany that will help you plan your holidays.

I write extensively about vegan food around the world, and I’m one of the very first vegan travel bloggers. Here are some more vegan guides for European cities and destinations.

this is great post.Looks like you had great time in Berlin with sumptuous food

Berlin is the vegan capital of the world is amazing! Had not heard that and this article makes me want to go back to Berlin to just have some yummy food! Looking at all the food you tried is making me hungry. Great information. I pinned this for later. #WeekendWanderlust

Great post! I am planning a trip to Berlin this summer and was a little worried about finding vegetarian food options. Looks like I needn't worry any more! Pinning this for later reference.

I've been to Berlin so many times I've lost count and haven't even heard of some of these places! That's the thing about that city...always something new to try when it comes to delicious vegan food. Thanks for the tips. :D