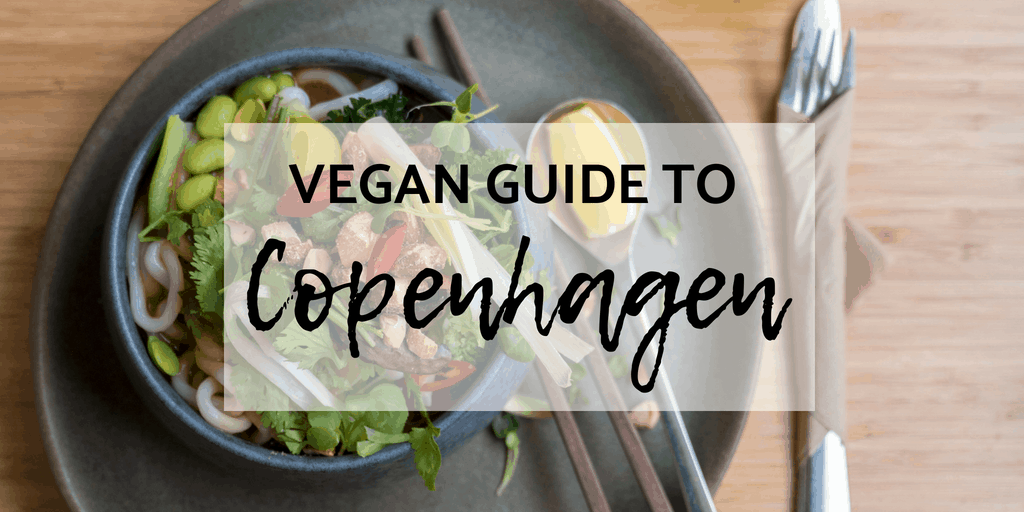 Are you vegan, vegetarian, or looking for plant-based options…and travelling to Copenhagen? Have no fear!

During my three days in Copenhagen, I ate a lot of delicious vegan meals. I didn’t have any trouble finding plant-based eateries or spots with vegan and vegetarian options. I’m very happy to include so many establishments in this vegan Copenhagen guide.

This isn’t by any means a complete guide as there simply wasn’t enough time or space in my stomach to sample every restaurant. However, I went to as many as I could and feel as though I stopped at many of the best vegan restaurants in Copenhagen.

While Denmark has one of the highest rates of meat consumption in the world, the vegan movement is growing at a rapid pace. This is mostly due to a deep concern about the state of our environment. Copenhagen was named the European Green Capital in 2014 and has plans to be carbon neutral by 2025. Going vegan is the easiest and best change a person can make in order to have a positive impact on the environment and climate change. Even Danish politicians took a 22-day vegan challenge to demonstrate how a typical Western diet has a massive environmental footprint.

Looking to stick to a vegan diet? Check out this vegan Copenhagen restaurant guide for travellers and locals alike. 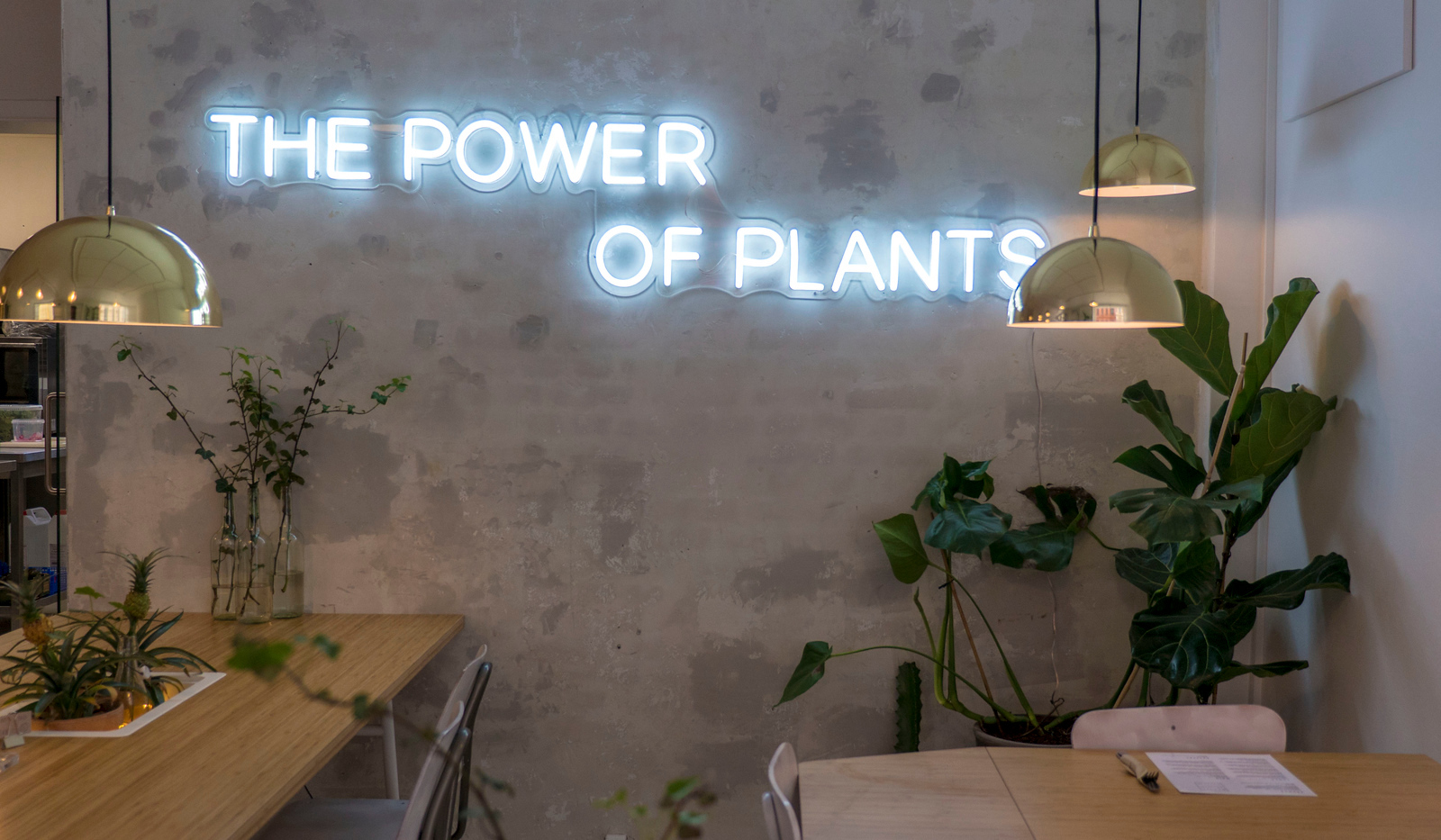 Plant Power Food in the Nørrebro district, provides healthy meals while taking care of the planet. While serving plant-based meals is the best way to combat climate change, Plant Power Food takes additional steps to be a zero-waste restaurant. For instance, you’ll find second-hand furniture around the restaurant. They compost, recycle, and only use the dishwasher when it’s a full load. The employees shut off the lights when they aren’t needed, and all straws are made from corn. 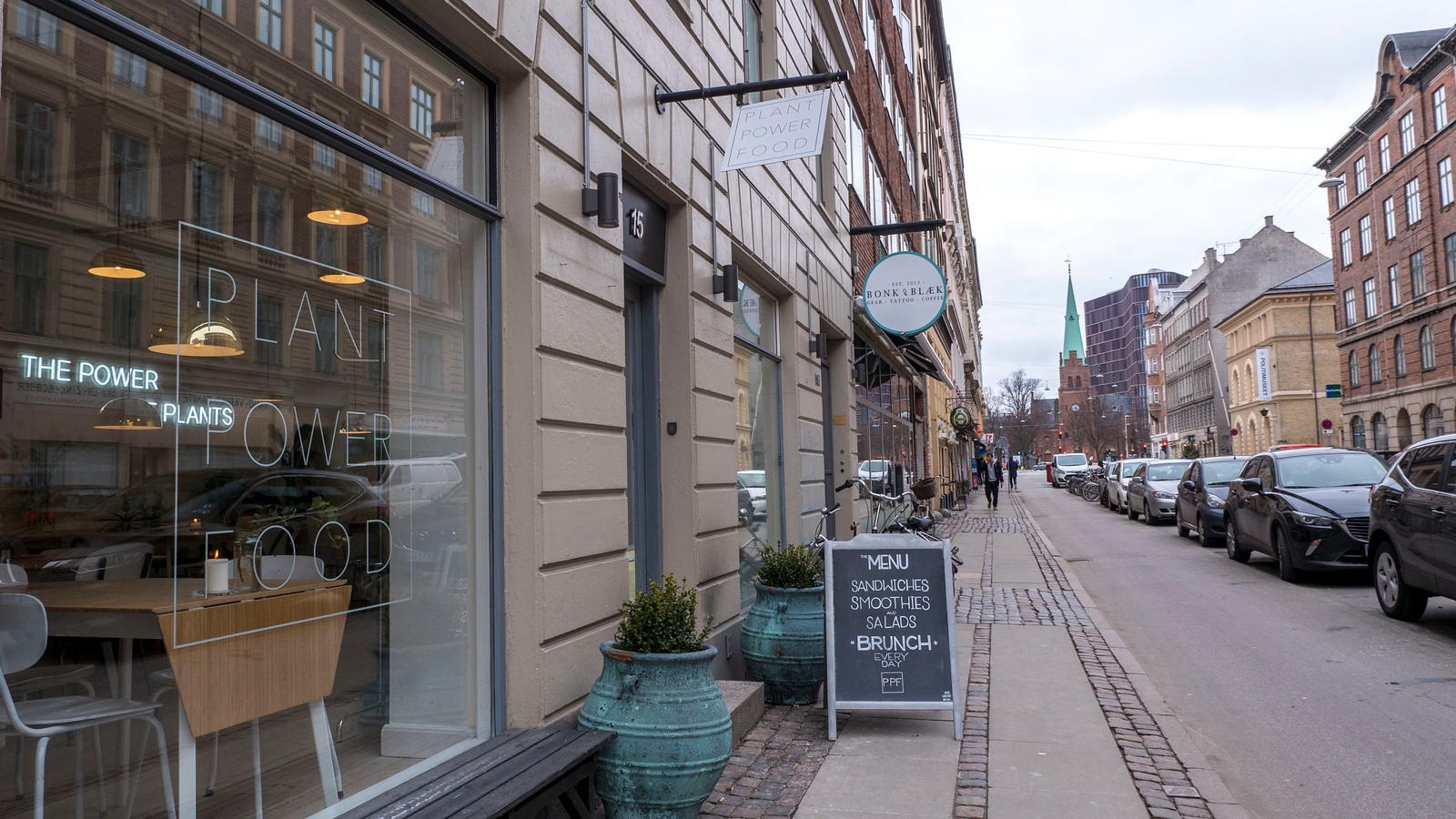 Whether it’s brunch, lunch, dinner, or dessert, Plant Power Food has got you covered for every meal of the day. There’s a fresh smoothie bar for a refreshing boost of energy. Start the day off right with their whole foods brunch plate that includes kale chips, fresh rice paper rolls, chickpea salad, mashed sweet potato, avocado, baked bread, nut pate, and a smoothie.

I dined at Plant Power Food for lunch and had my choice of the brunch plate, as well as soups, salads, sandwiches, and bowls.

I chose the Noodle Bowl for lunch, which consists of udon noodles with power veggies, spring onions, and coriander in a ginger-miso broth, topped with chili, dehydrated portobello, and a wedge of lemon.

This soup was hearty, healthy, and warmed my bones on a chilly day.

Note: There is another Souls restaurant in Copenhagen, their original location at Melchiors Pl. 3. I found their newer location to be more convenient to visit on my travels.

Souls has a really cute slogan, Eat Like You Give a Fork! Their motto encompasses the philosophy of the entire restaurant. Souls puts the soul back into food by offering high quality, locally sourced ingredients by minimizing the environmental footprint of every meal. They want you to be conscious of the quality of food you put into your body, but also the impact it has on the planet. By eating local, organic, vegan food, you’re making the best choice possible for you and the environment. 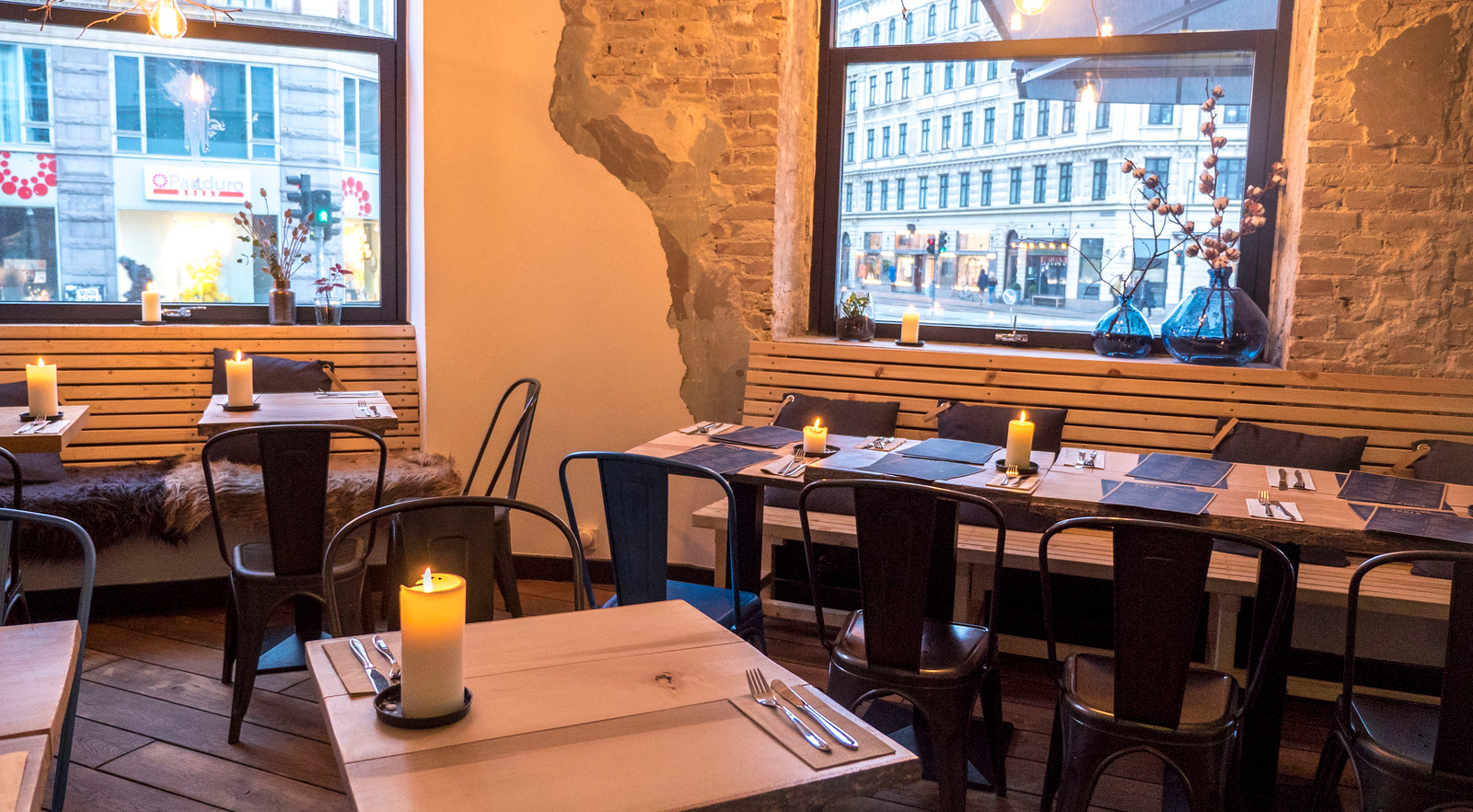 Souls has every meal covered: breakfast, brunch, lunch, dinner, and dessert. There are so many choices on the menu for every taste. Burgers, ramen noodles, pizza, pancakes, smoothies… it’s the comforting food that you love.

As I was feeling super tired after walking around all day, I took my meal back to my hotel rather than dining at the restaurant. The atmosphere of Souls was very soothing, warm, and inviting, so it would be a real treat to dine in, too.

Souls will make all of your vegan Copenhagen dreams come true, and I highly recommend you dine there! 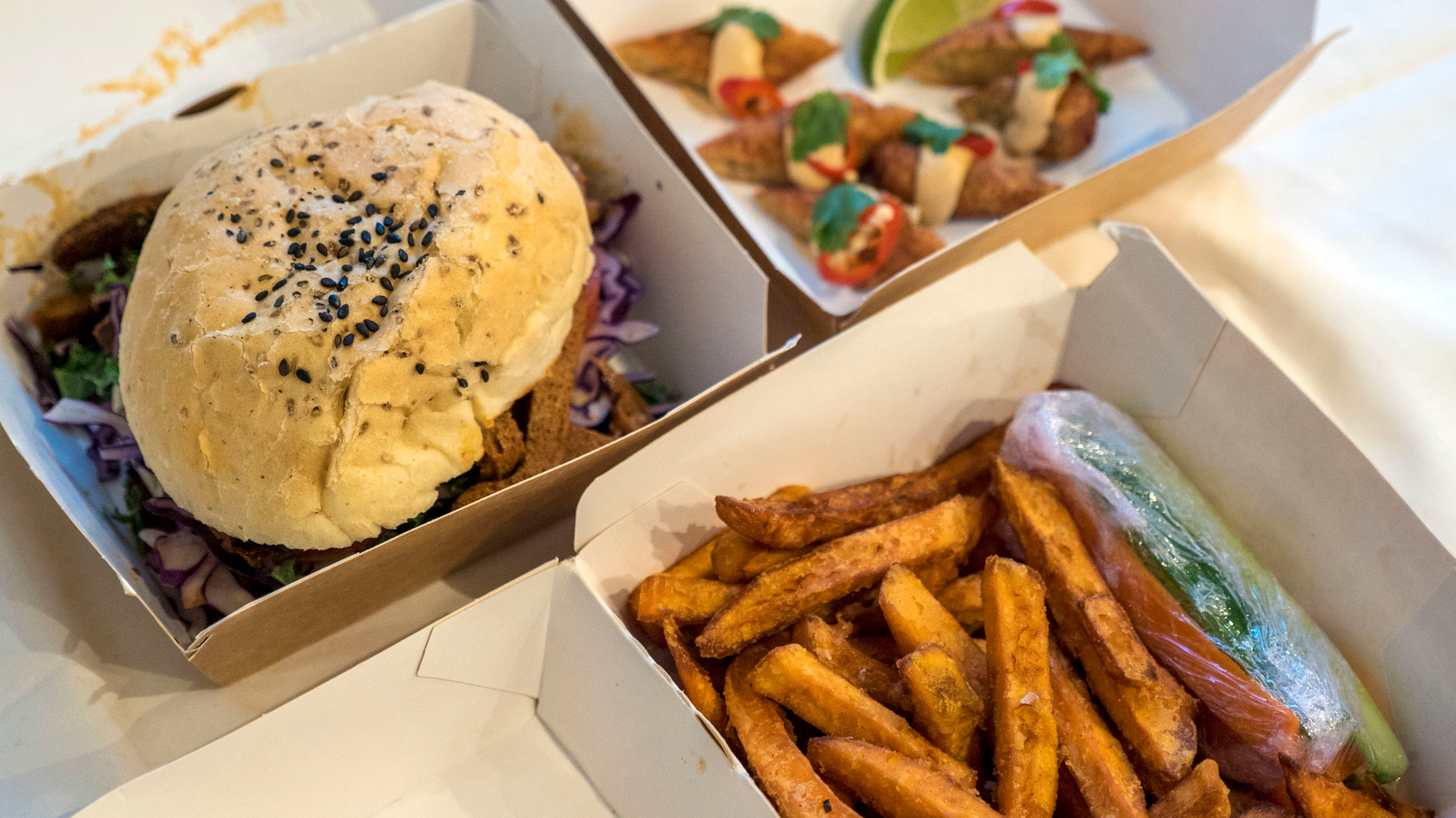 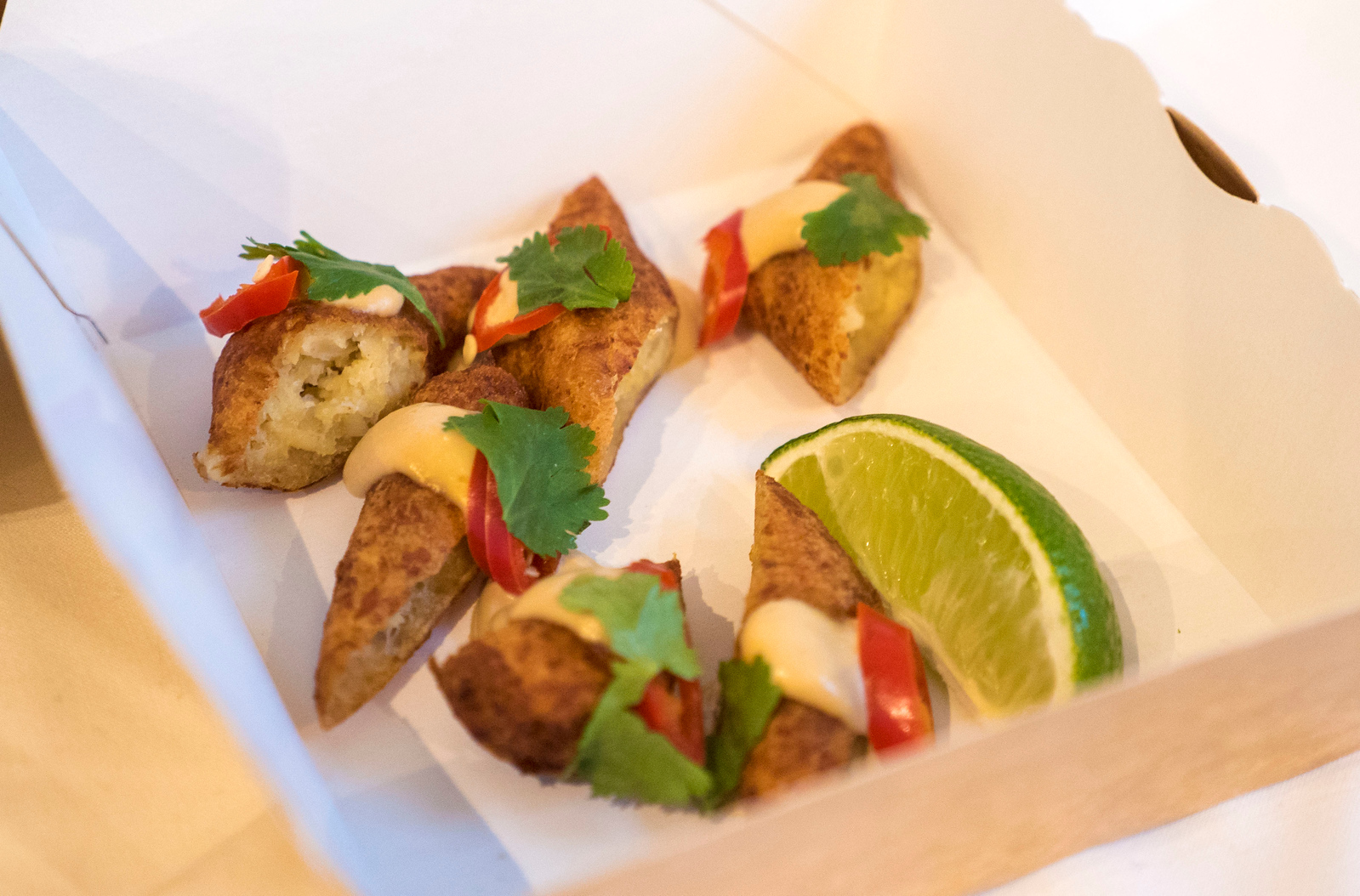 GreenBurger was the first vegan restaurant I tried in Copenhagen and it didn’t disappoint. Green Burger has all of your fast food favourites, made healthier using plant-based ingredients.

There are numerous burger and fries options on the menu. There’s the classic burger, the chicken burger, and the hot chili cheese burger – all meatless and completely plant-based. GreenBurger also has vegan nuggets, onion rings, and fries with dips.

I decided to go with a combo: a classic burger, fries, and a retro soda (I chose an orange one that reminded me of a Creamsicle).

The burger had mache lettuce, a spicy mayo sauce, red onion, and pickled cucumber as toppings. The fries were topped with sea salt and thyme. Yum!

Out of this whole vegan Copenhagen guide, GreenBurger wasn’t as healthy as some of the others, but it was a tasty and comforting meal. 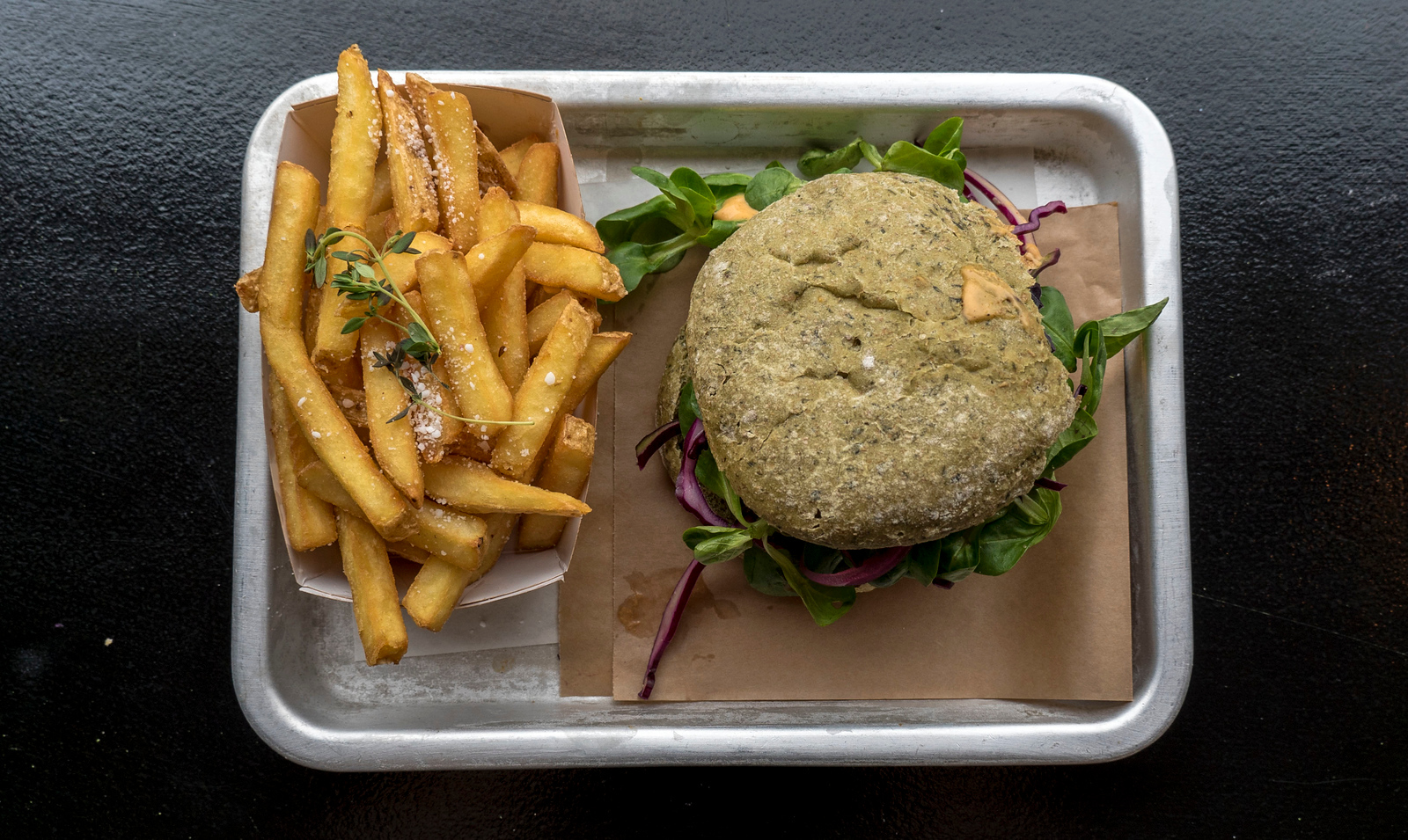 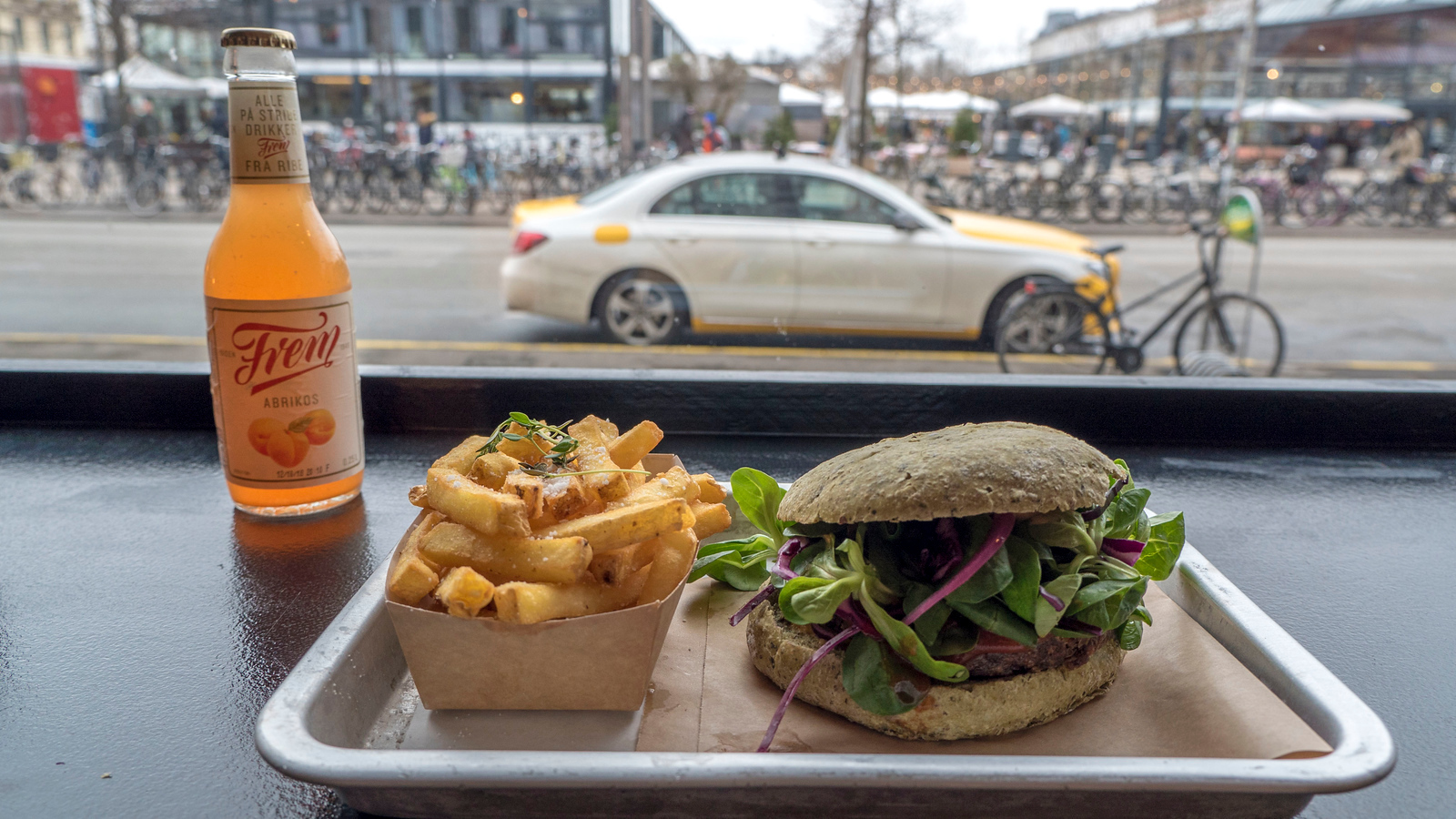 was my breakfast spot one day in Copenhagen, although it’s the perfect place for an afternoon coffee and treat. Known for their vegan cakes, I ate a dessert that was absolutely divine. Yes, I ate dessert for breakfast. There’s no shame in that while you’re on holidays (or whenever you feel like it).

Though I was thinking about ordering a yogurt parfait, they were sold out of that menu item. So, I went with something a little more sweet for breakfast. I’m so glad that I chose the Banoffee pie over a boring cup of yogurt. Paired with a cup of coffee, it was so delicious. From this vegan Copenhagen restaurant guide, I recommend Yellow Rose as the one place you must dine at for dessert or a treat.

Here’s the full menu so you can take a look: 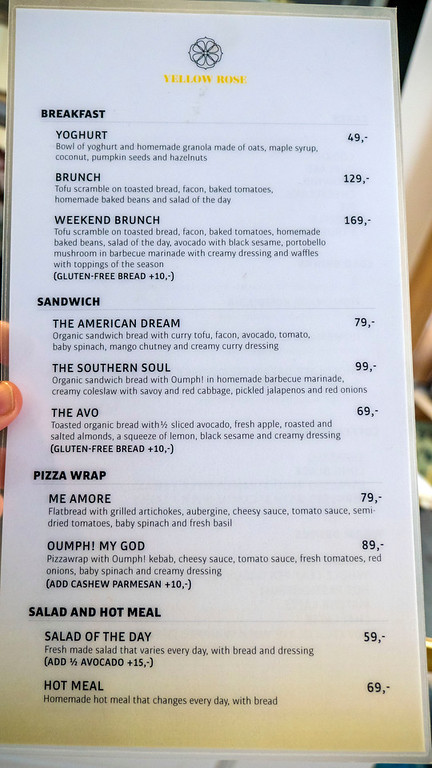 And here are the desserts, as well as my sweet treat.

While Riz Raz isn’t a vegan or vegetarian restaurant, they have an all-you-can-eat vegetarian buffet that comes with every meal. You can also choose just the buffet as your meal, which is a more economical option. Personally, I felt as though the buffet was more than satisfying, so I was content with a plate full of vegan buffet offerings. 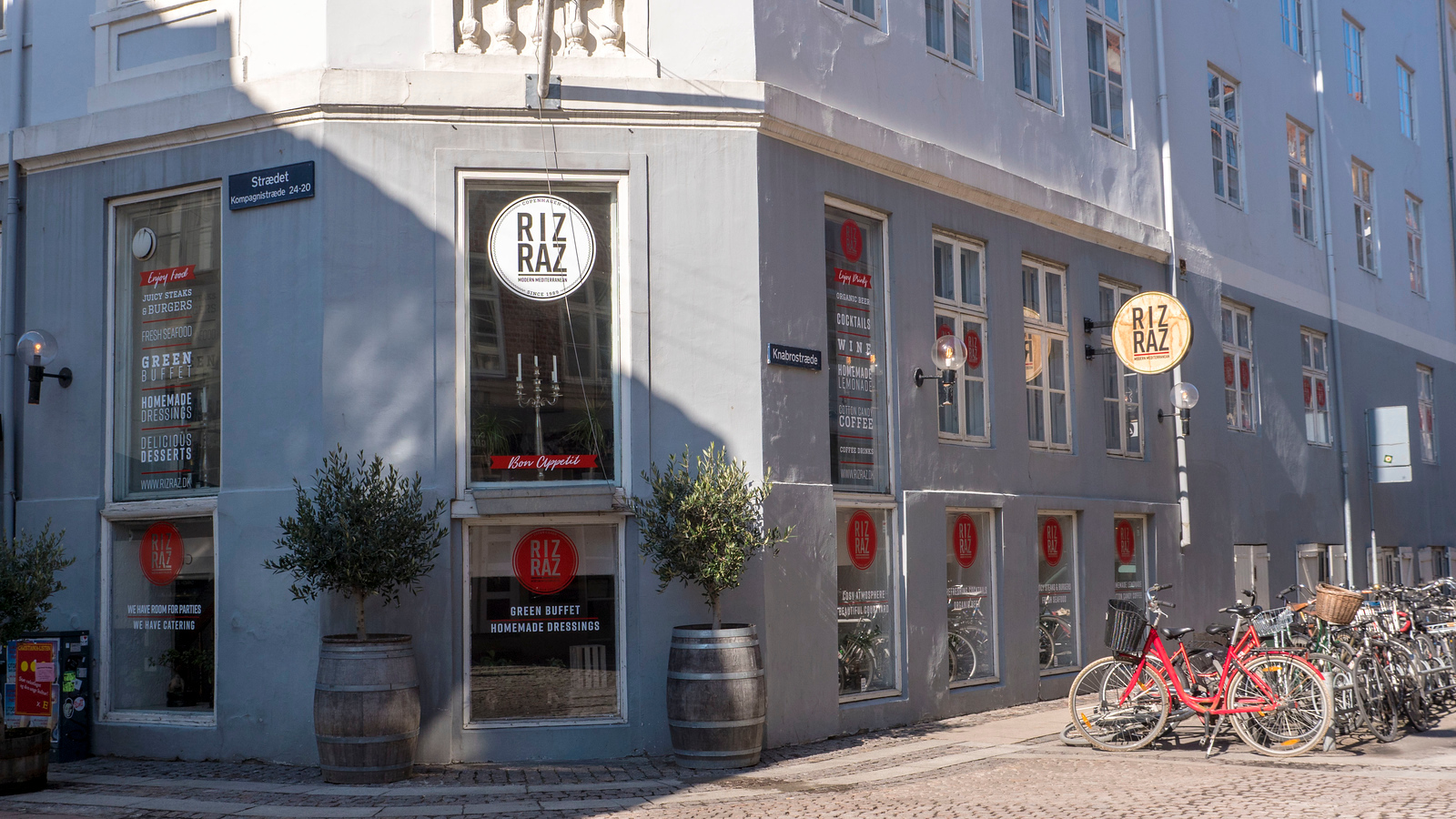 Choose from several Mediterranean inspired salads, potatoes, pasta, hummus, falafel and pita bread. Eat as much as you like, and the food will keep you satisfied as you walk all over Copenhagen.

Some of the buffet meals are vegetarian but most are vegan, and they are all clearly marked. 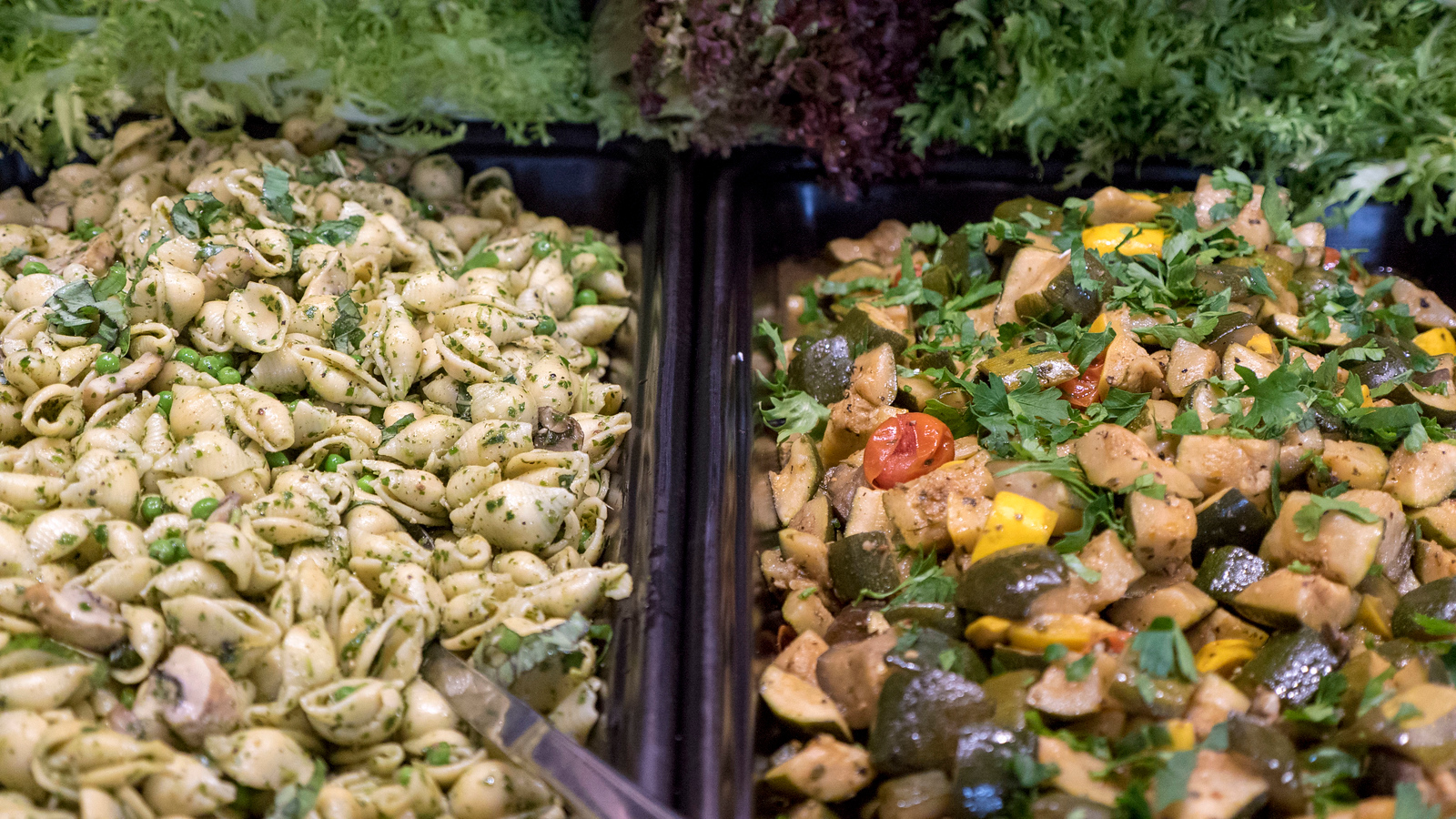 Chao Viet Kitchen is a Vietnamese restaurant with a separate vegan section on the menu. It’s not a very big restaurant, but there are a few bigger tables for larger parties, and another few spots for couples and solo diners. 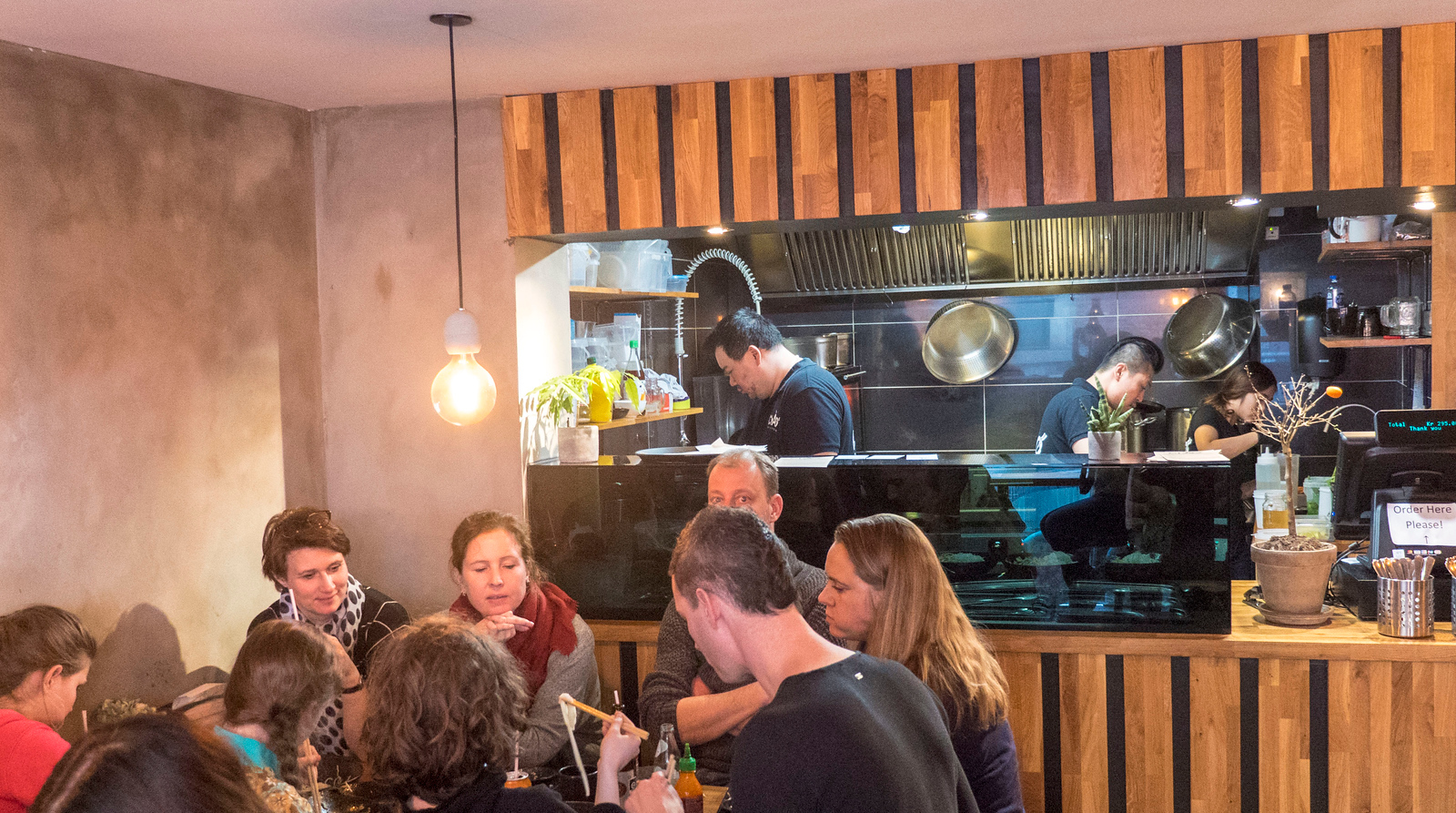 Here is the vegan menu at Chao Viet Kitchen: 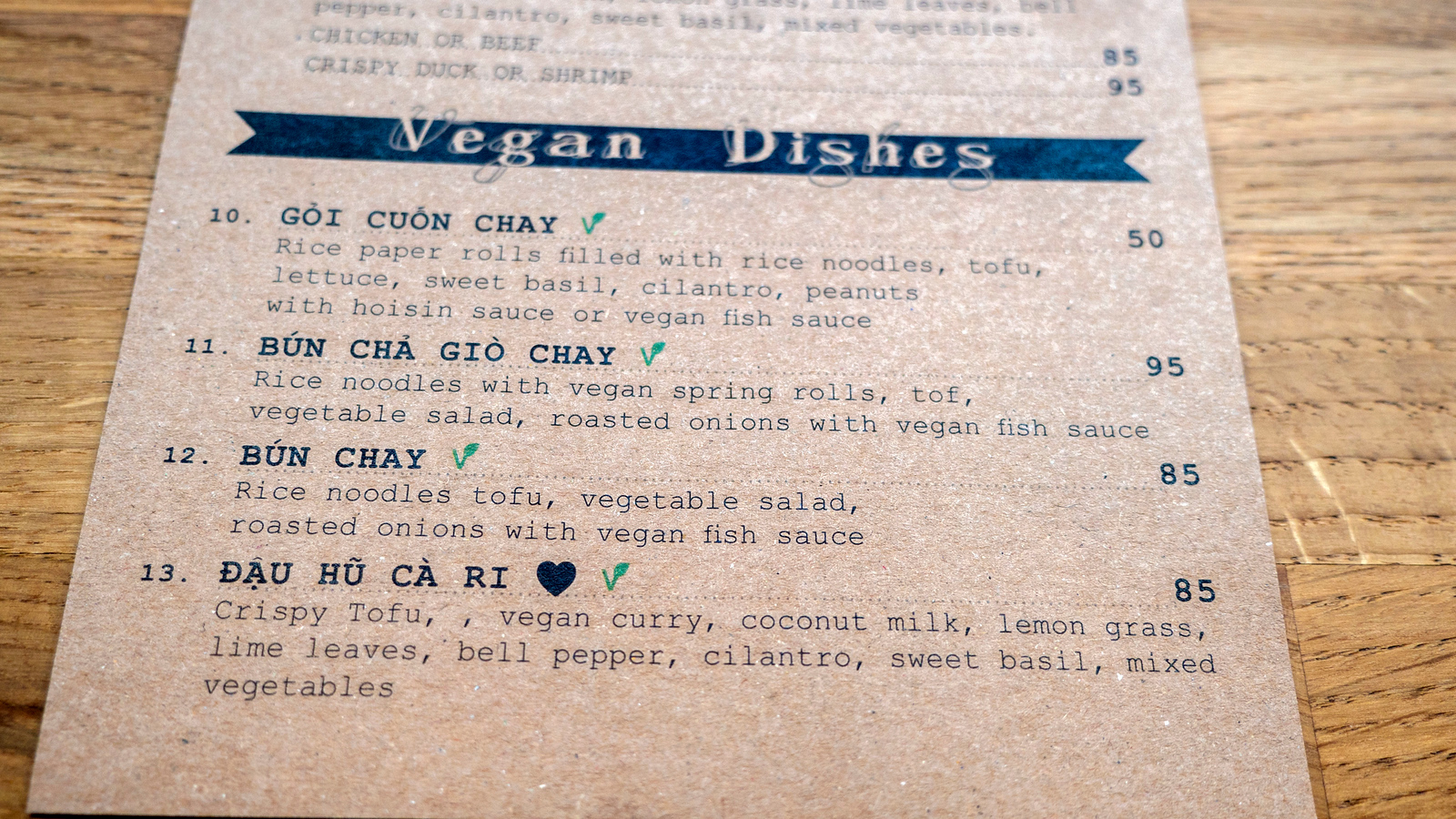 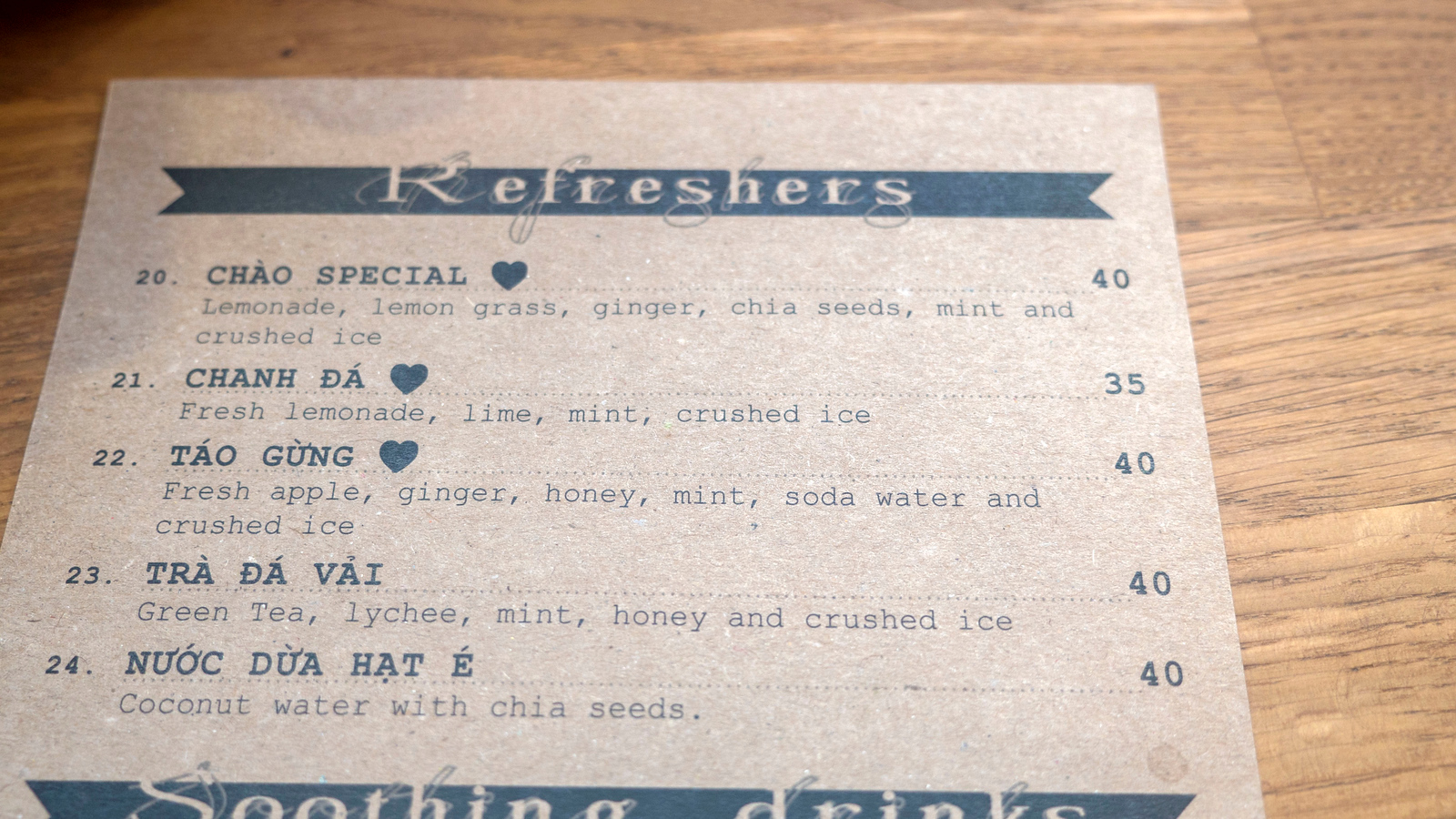 I ordered the Bun Cha Gio Chay, which is a rice noodle dish with spring rolls on top of it. They even prepare their own vegan fish sauce for a more traditional taste, leaving out any animal products.

To drink, I sipped an iced green tea with lychee and mint. 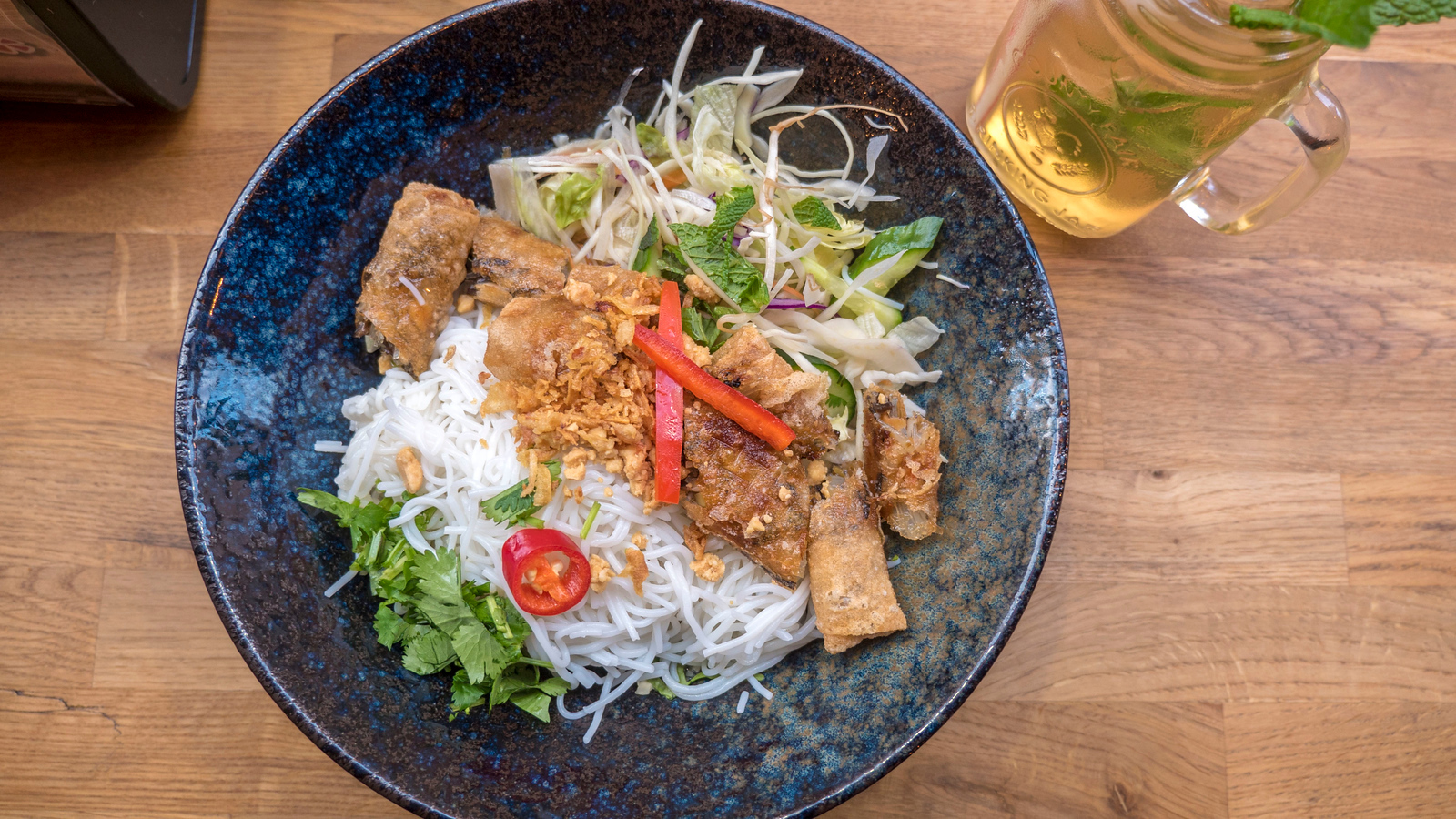 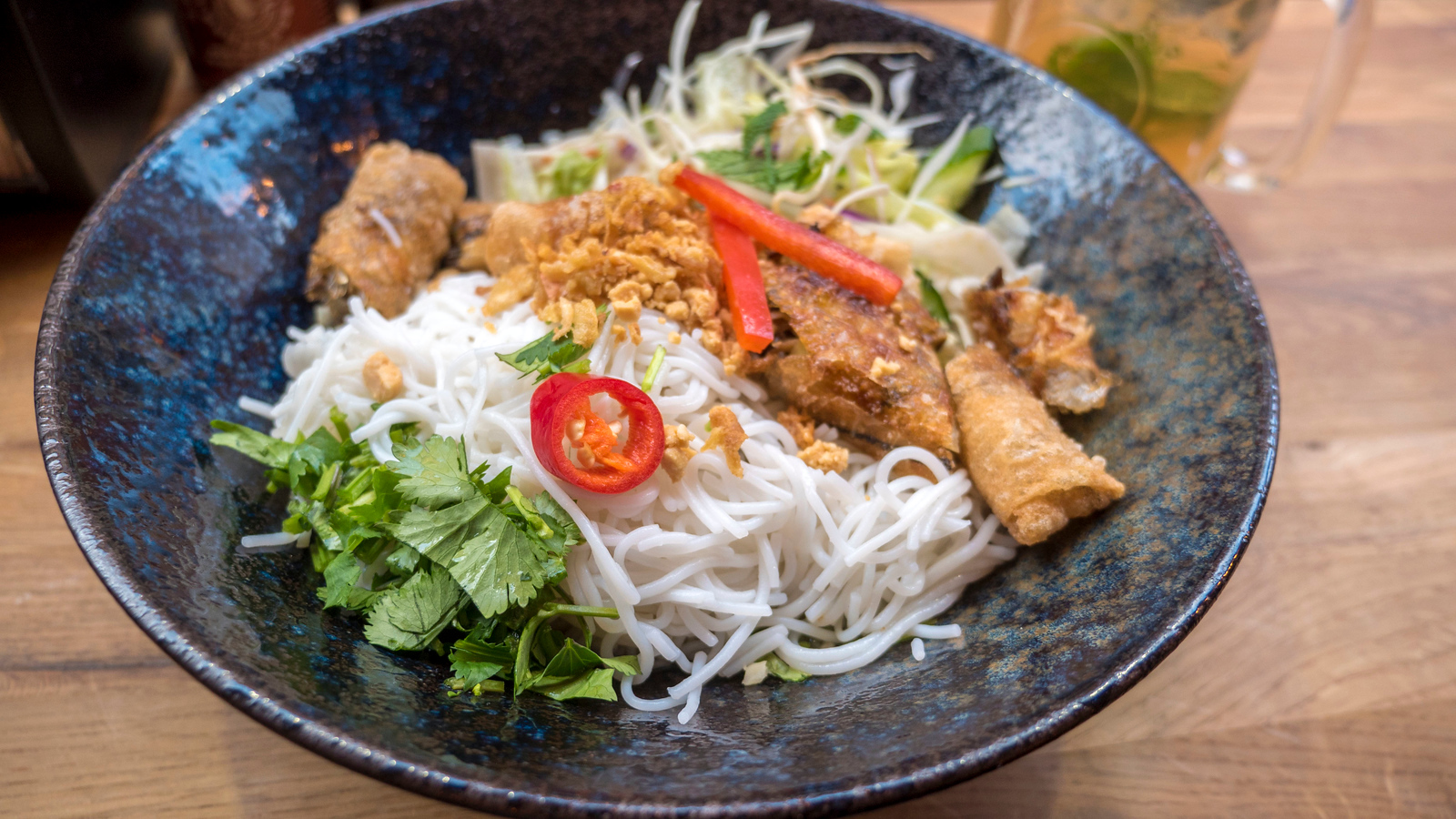 District Tonkin is an authentic Vietnamese restaurant in the heart of the Indre By district of Copenhagen. It’s not a vegan restaurant, but they serve a few vegan meals that are clearly advertised as such (VG on the menu).

I was a little bit disappointed because they were completely sold out of tofu, and most of the vegan meals had tofu in them. I ordered some vegetable spring rolls and the rice noodle salad (sans tofu), which was super yummy. They added some extra vegetables to the mix; however, it would have tasted better with some tofu in it.

I visited District Tonkin on my first day in Copenhagen and was still tired upon my arrival. After walking around all day, I took my meal back to my hotel room as it was very close to the restaurant.

Looking for vegan or gluten-free baked goods? Naturbageriet is right beside the Torvehallerne market, and it’s a gem. This little bakery always seemed busy with mostly locals, lining up for their favourite treats.

Everything is clearly marked as vegan or gluten-free. I stocked up on a few sugary desserts and some croissants for breakfast the next morning. 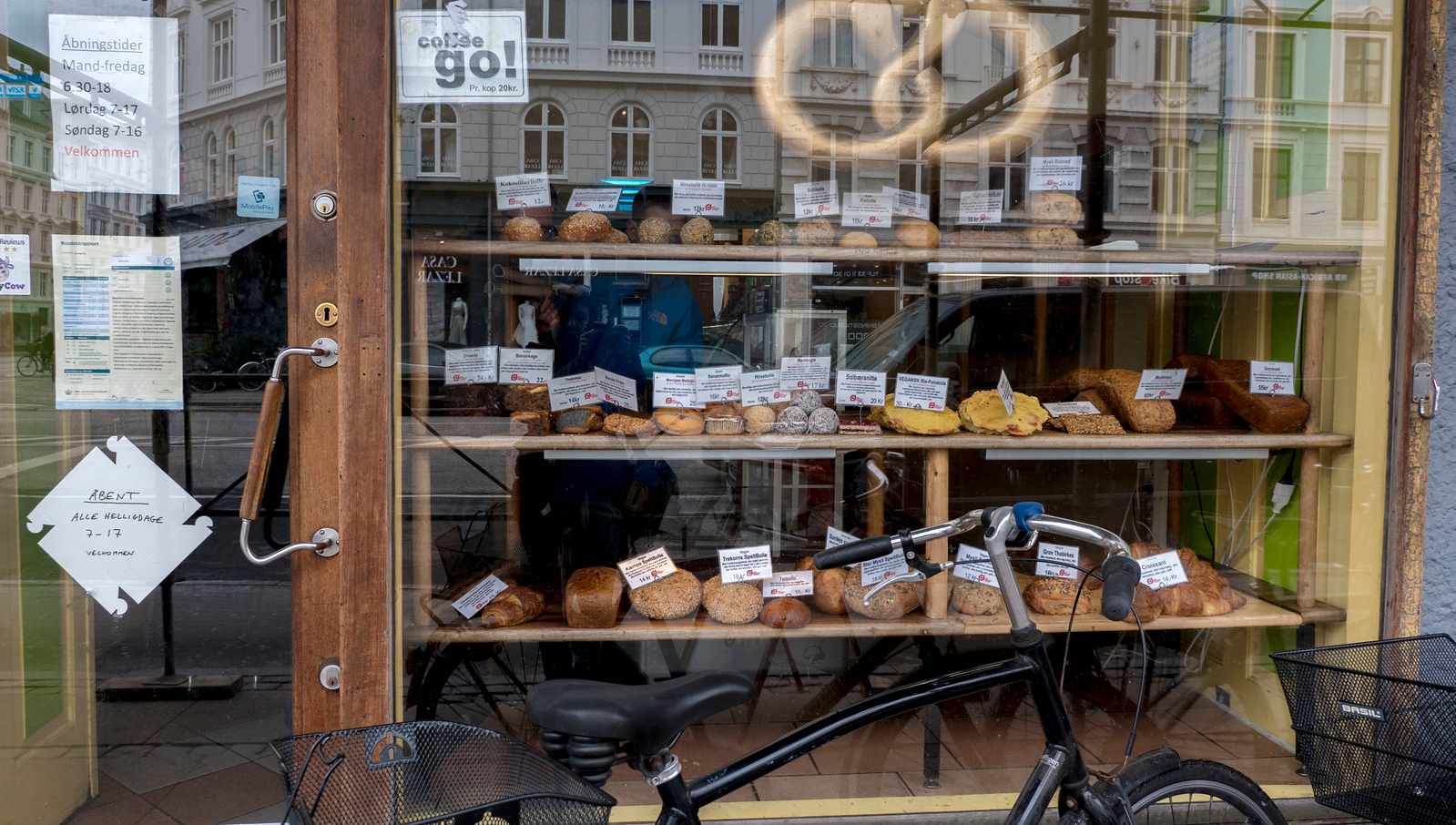 There’s also a great variety of grocery items, including refrigerated goods like vegan cheeses. If you’re staying for a little while in Copenhagen or have access to a fridge, be sure to stock up here.

It was so busy that I couldn’t take photos inside, but I snapped a few through the front window. 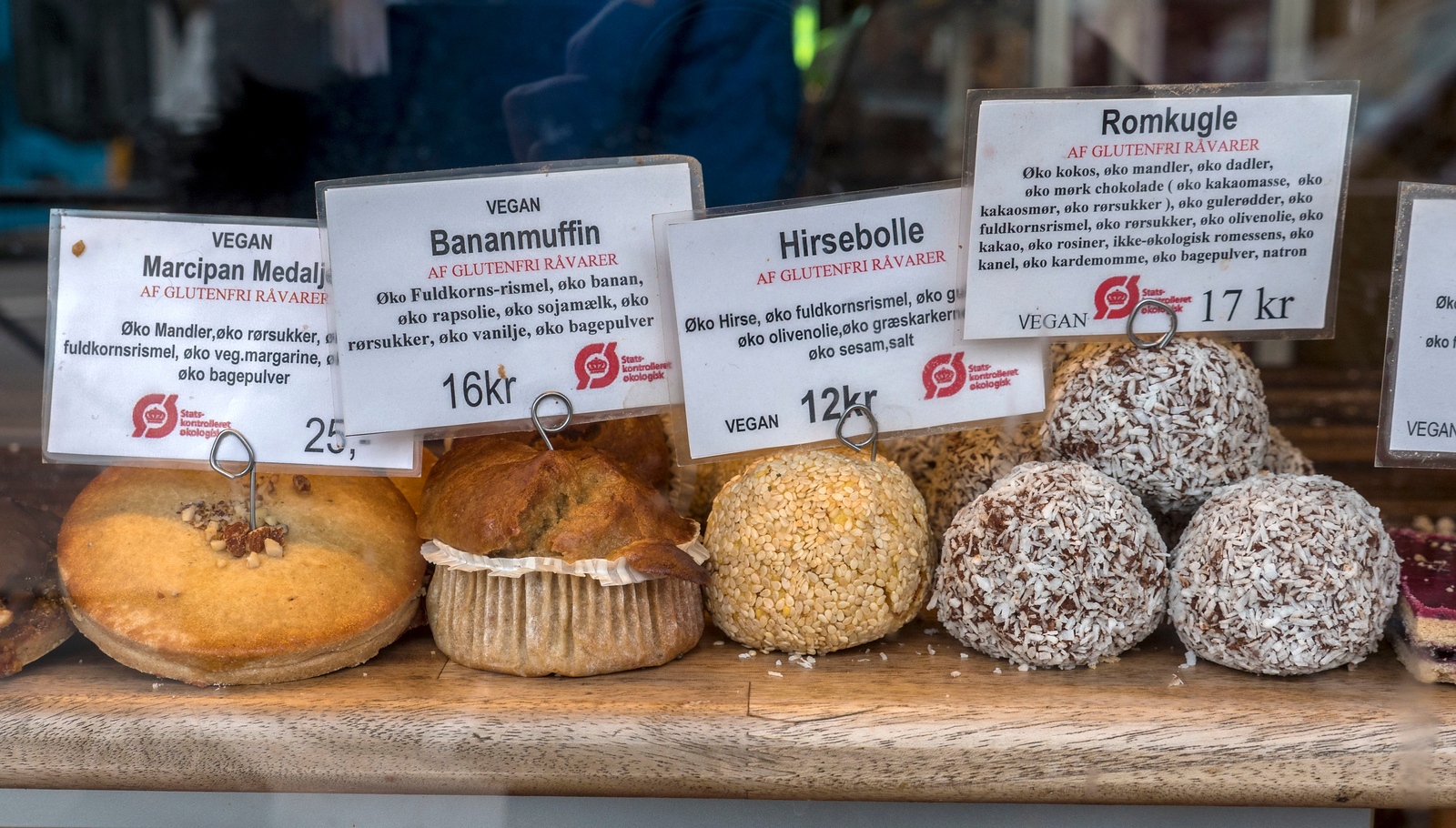 Torvehallerne is a food market spanning two buildings and outdoor areas that is a must visit spot in Copenhagen. You might be wondering what a traditional market is doing in a vegan Copenhagen guide. As it turns out, there are several vegan options at stalls within Torvehallerne. 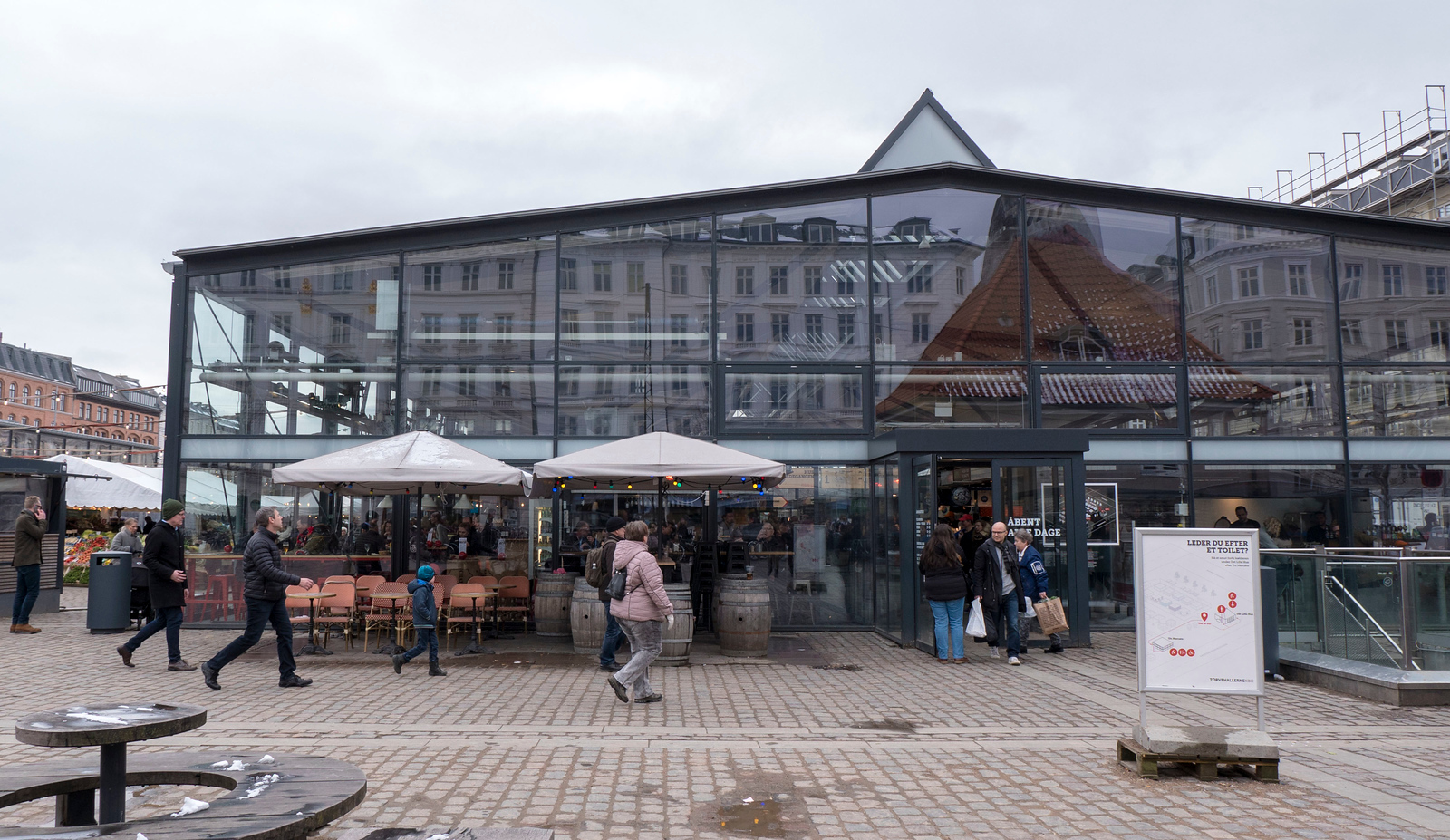 I recommend wandering around the stands at Torvehallerne. Many of the booths have their menus posted with the vegan items clearly marked. If you’re wondering, just ask the friendly staff members as I’m sure they’ll be able to assist you. Everyone in Copenhagen seemed familiar with veganism, so they will be able to tell you if they offer any vegan meals. 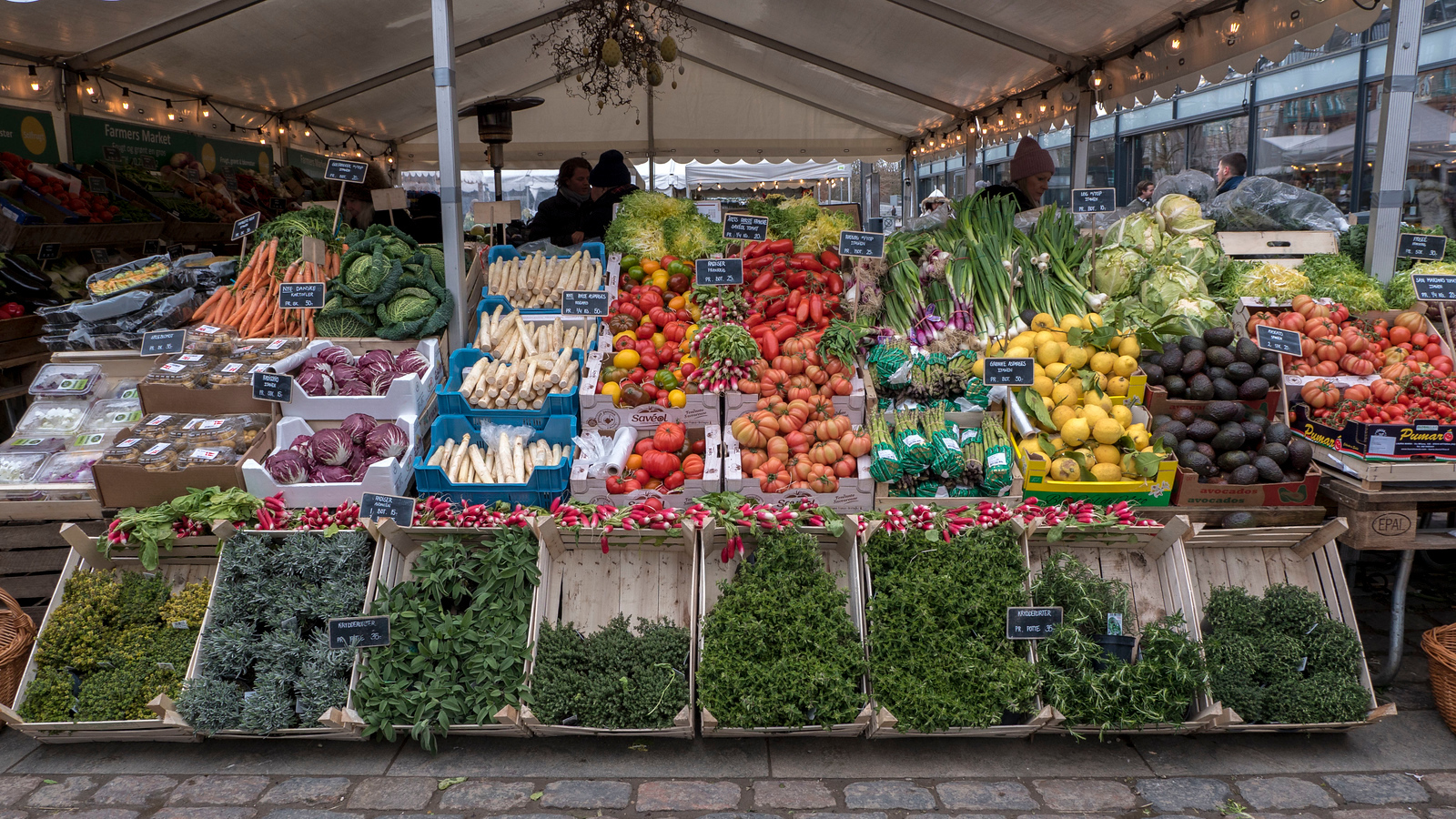 I was on the lookout for vegan food at Torvehallerne and found a few options. Palaeo has two vegan meals and two vegetarian meals posted on their menu board. There’s also one veggie burger that’s labelled as vegetarian – I’m not sure if it can be made into a vegan burger, but it wouldn’t hurt to ask. 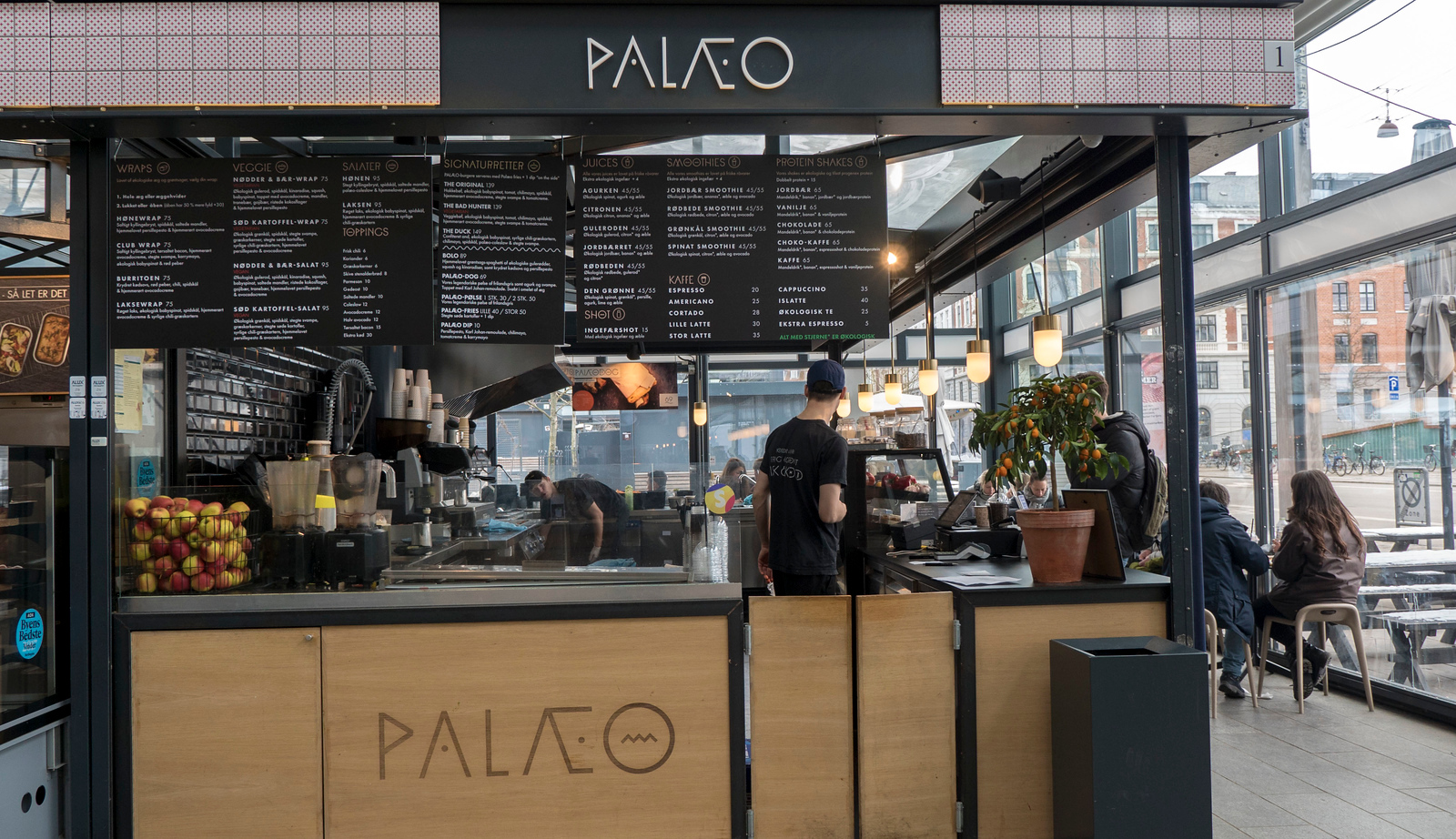 Vita Boost has several smoothies and smoothie bowls that are naturally vegan. For food, there’s a vegan panini with avocado and hummus. 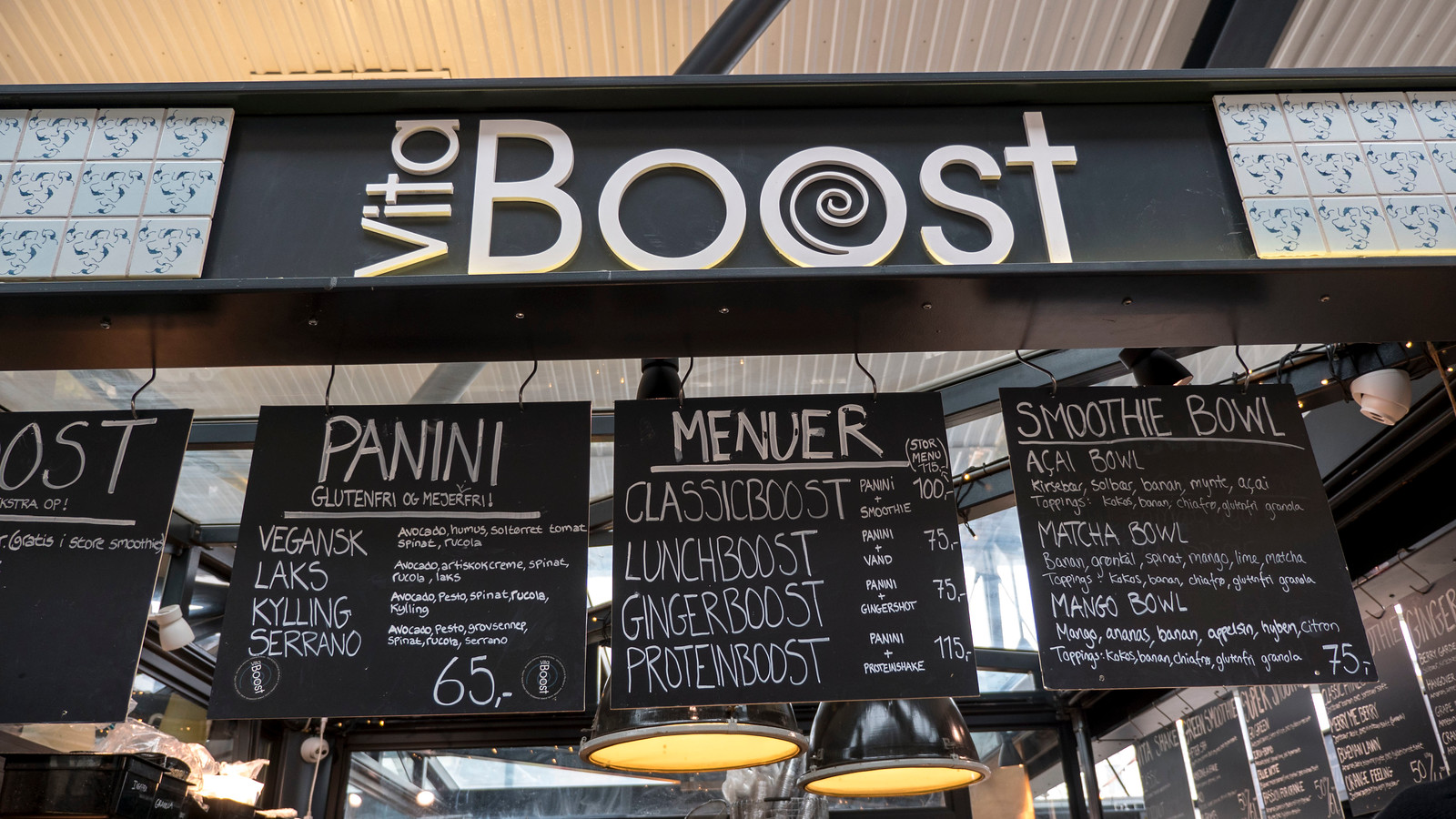 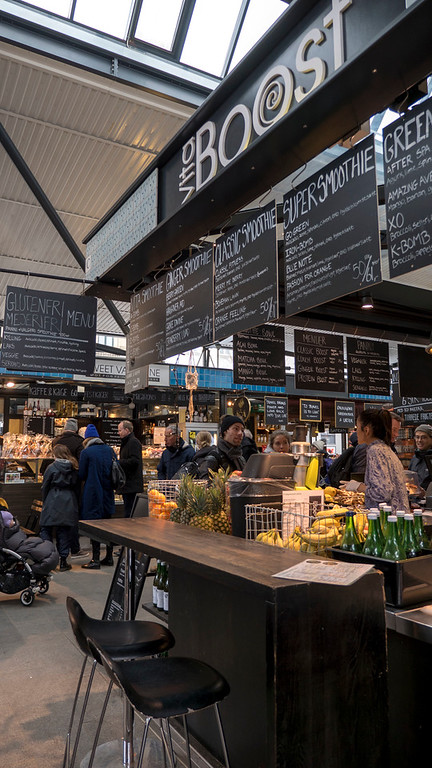 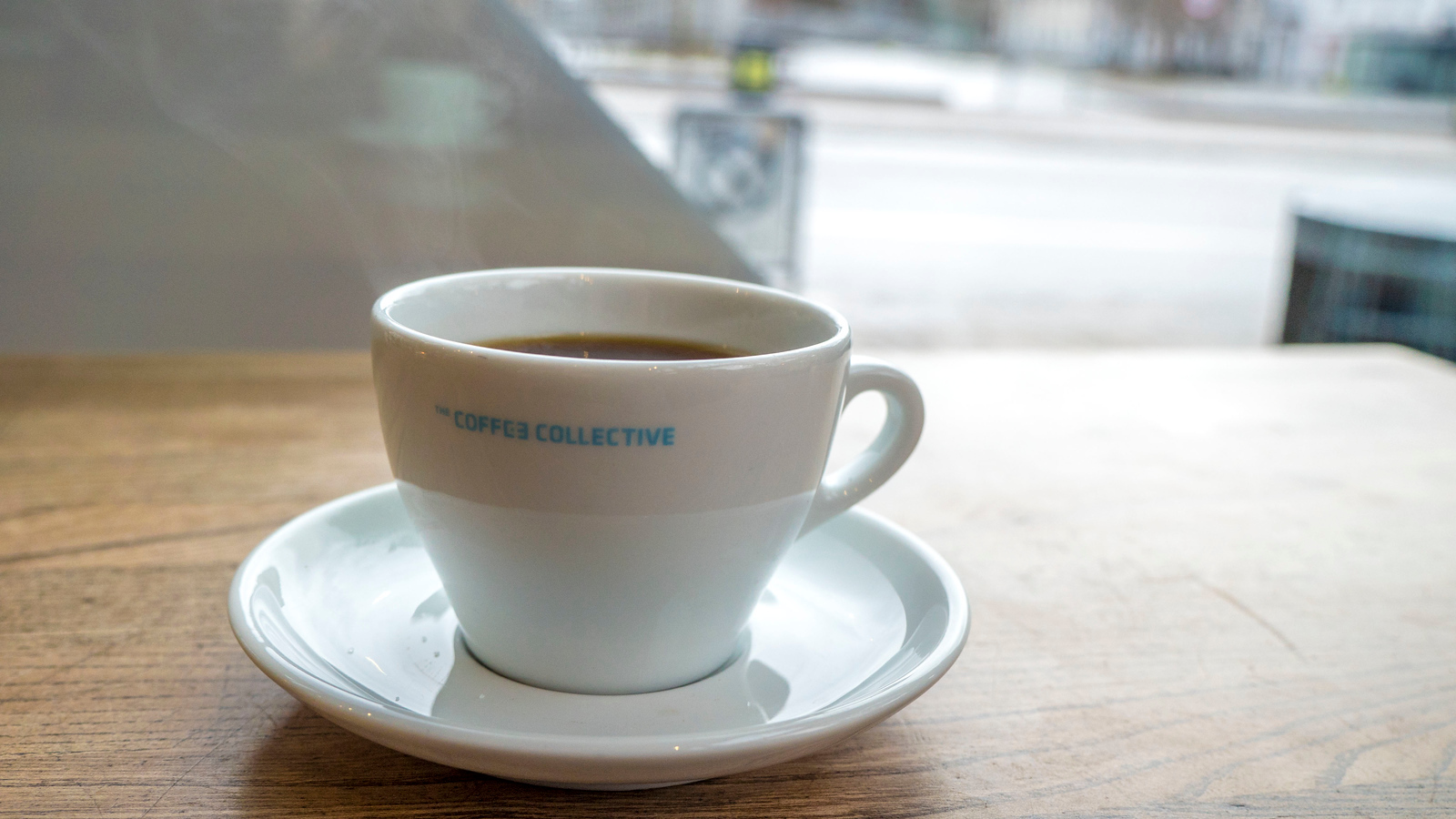 7-Eleven convenience stores might seem like a funny option to have on a vegan Copenhagen restaurant and travel guide. However, the 7-Eleven shops in Copenhagen are super vegan friendly! I immediately noticed that there are signs advertising their vegan options all over the front of the store. They’ve got the non-dairy varieties of Ben and Jerry’s ice cream, for instance.

There are a couple of salads labeled as vegan as well. For a more cost effective option in a very pricey city, it wouldn’t hurt to grab a meal or two at the 7-Eleven. It was my favourite place for a light breakfast or snack as they sell vegan croissants. The vegan croissants are buttery and quite yummy, so grab a couple when you’re in town.

It’s nice to see such a major chain getting on board with veganism. 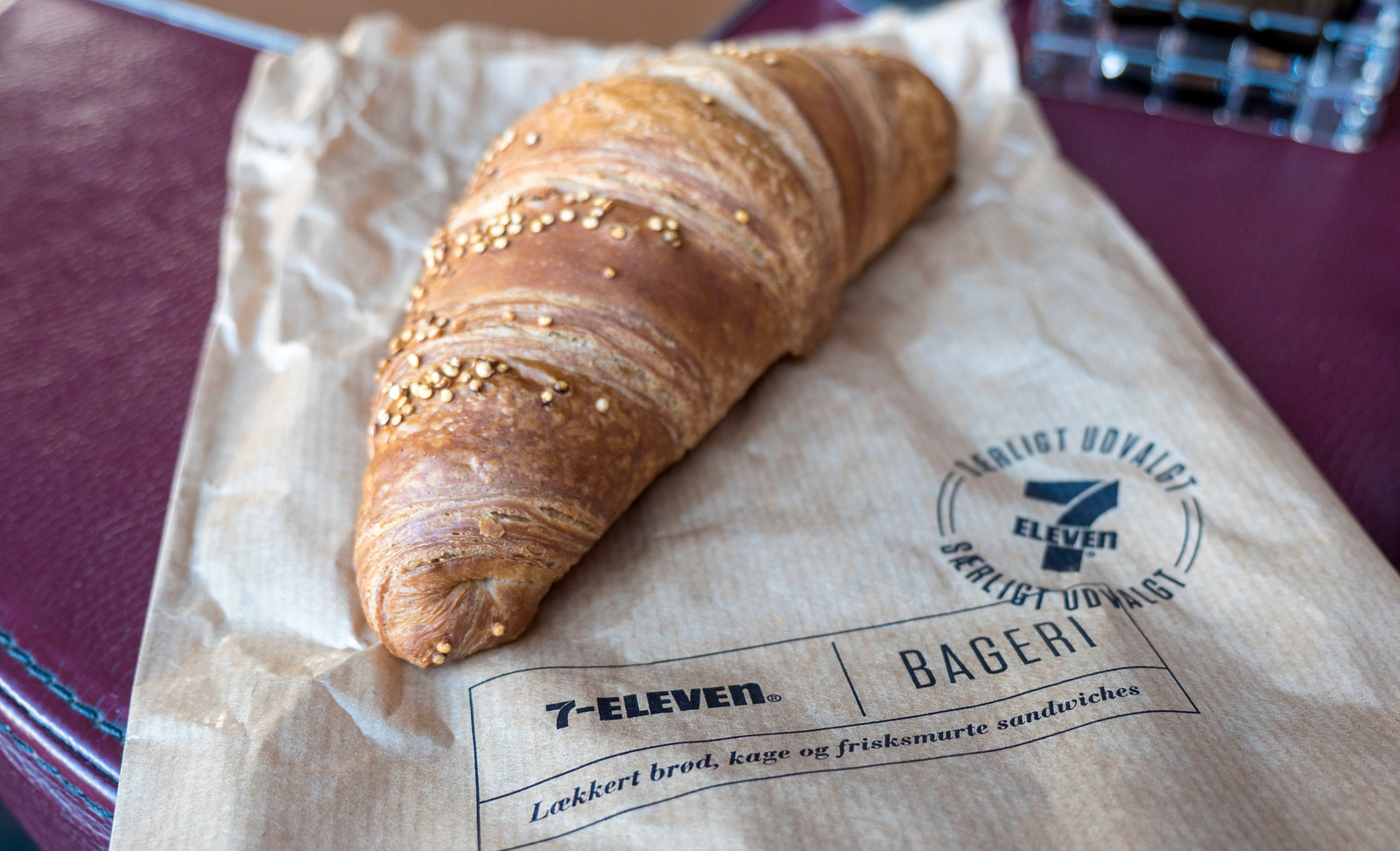 Would you like to see more photos from Copenhagen? Check out my Copenhagen travel photo album. You can even purchase prints, housewares, and more – all made from any of our photos!

With my vegan Copenhagen guide, you’ll have no trouble at all finding delicious vegan meals that are not only healthy, but from restaurants that are conscious of the environment. While there are many more vegan restaurants in Copenhagen, these are some wonderful establishments to try, particularly if you only have a few days in the city.

Looking for a place to stay? I stayed at Wakeup Copenhagen Borgergade, a modern, no frills hotel in the middle of town. It’s inexpensive (around $100 Canadian a night) and has your basic needs covered: it’s clean, has a modern design, and has the essentials (bed, shower, bathroom, TV, Wi-Fi).

The hotel is right in the centre of it all. You can walk everywhere, and there’s a train station down the street. I took public transit from the airport to the subway stop and walked to the hotel (about an 8 minute walk).

Book your stay at the Wakeup Copenhagen Borgergade as it’s a cheap hotel in Copenhagen with all the amenities you need. Check out more reviews from fellow travellers and photos of the hotel! 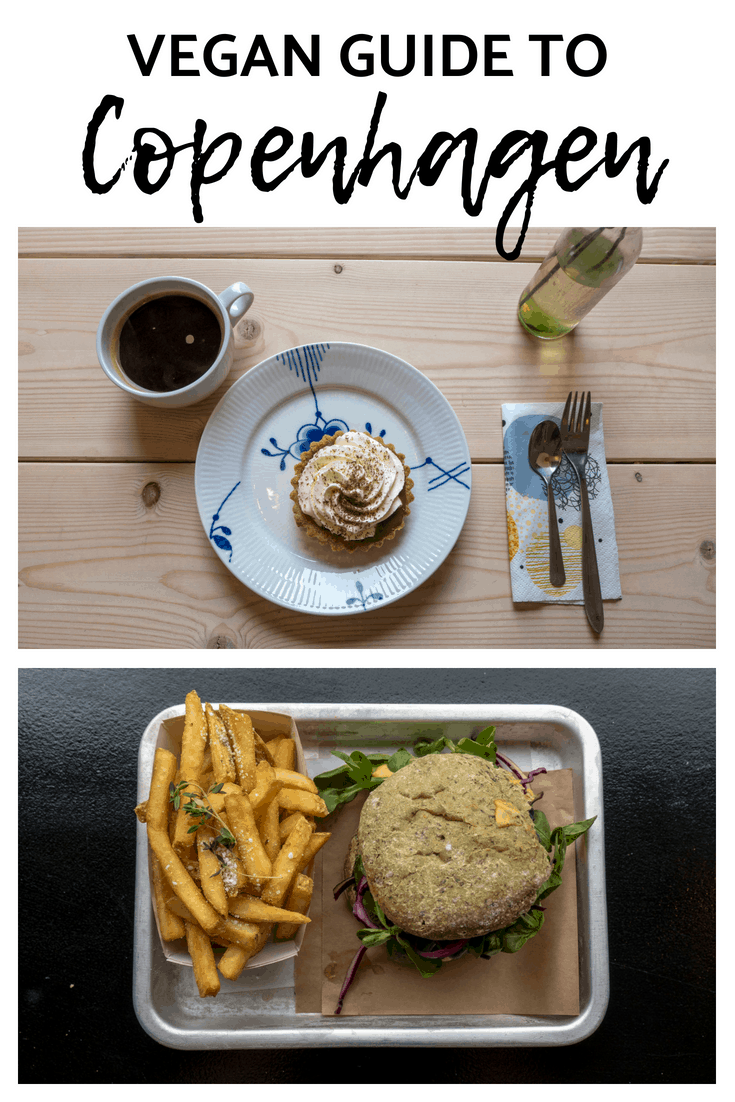 Have you ever visited Copenhagen before, and did you know it was so vegan friendly?