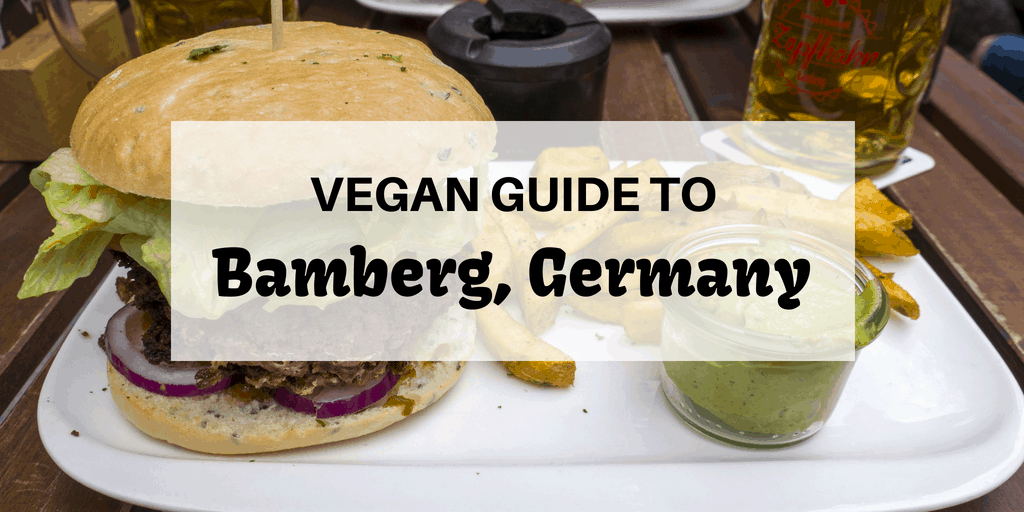 Enchanting scenes from Bamberg, Germany captured my attention from the start. When I saw photographs of this quaint German town, I knew that we had to visit. It was so charming and picturesque, as though it were straight from a fairy tale. I pictured myself wandering down the cobblestone streets and along the waterfront neighbourhood known as “Little Venice.” But, food is never far from my mind. Would the vegan food in Bamberg be as captivating as those dreamy views?

Wondering what to do in Bamberg for a day or two? Check out my 24 hour travel guide to Bamberg, Germany!

I feel there are more vegan options here for a couple of reasons. First, veganism is growing in popularity throughout Germany, so many establishments will have at least one vegan item on the menu. Second, Bamberg is a university town with many students, and this younger demographic tends to embrace veganism even more. Even though Bamberg doesn’t have a ton of 100% vegan restaurants, there are lots of vegan options all over town. You just need to know where to look.  My Bamberg vegan restaurant and travel guide will surely steer you in the right direction! 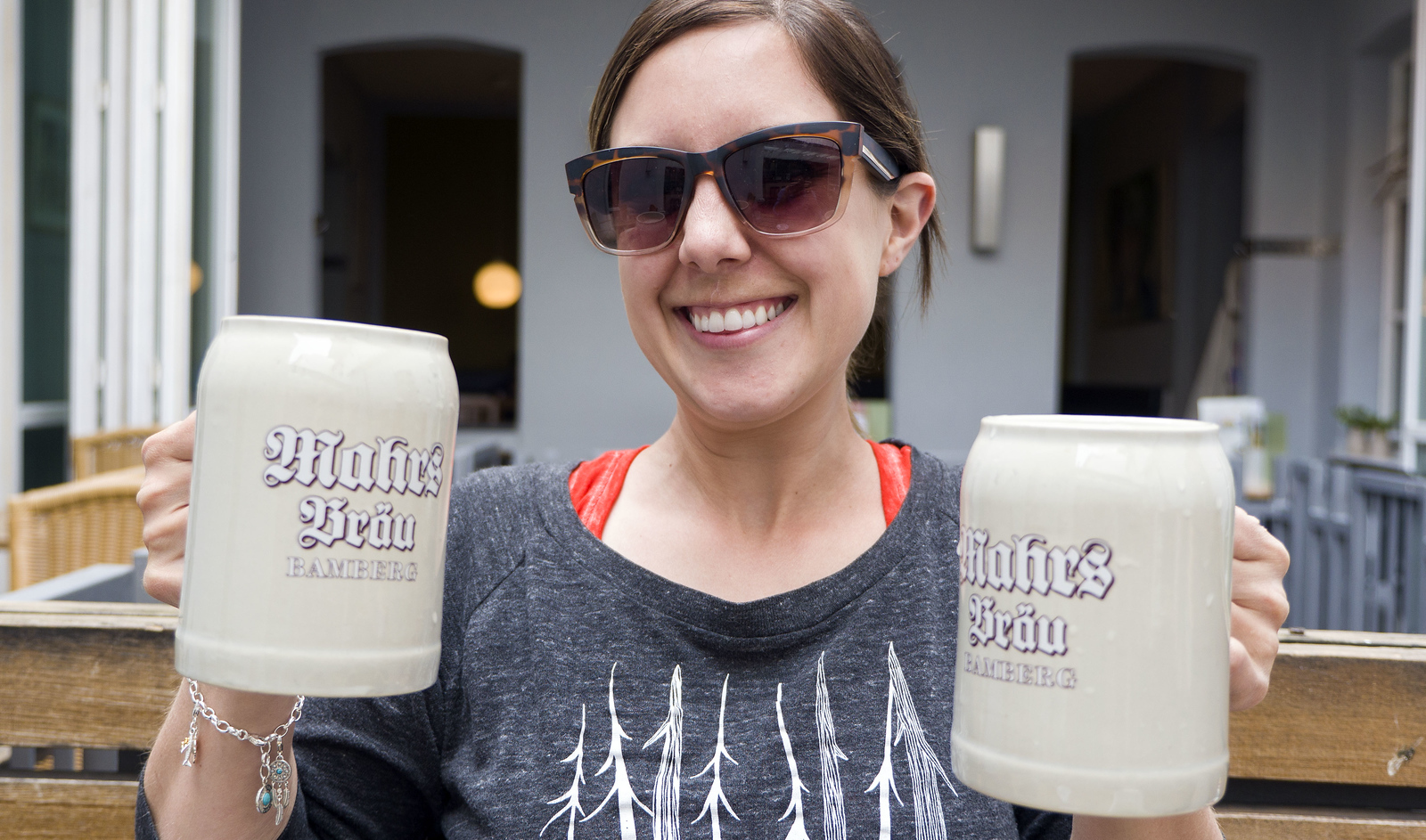 IS THE BEER VEGAN?

First things first, can you drink the beer in Bamberg if you follow a vegan diet? Simply put, yes you can! German purity laws state that only a few select ingredients are to be used to produce German beer: water, grain (barley or wheat), hops, and yeast. Those ingredients are all plant-based and vegan. If you’re drinking traditionally brewed German beer, it’s automatically vegan. Woohoo! 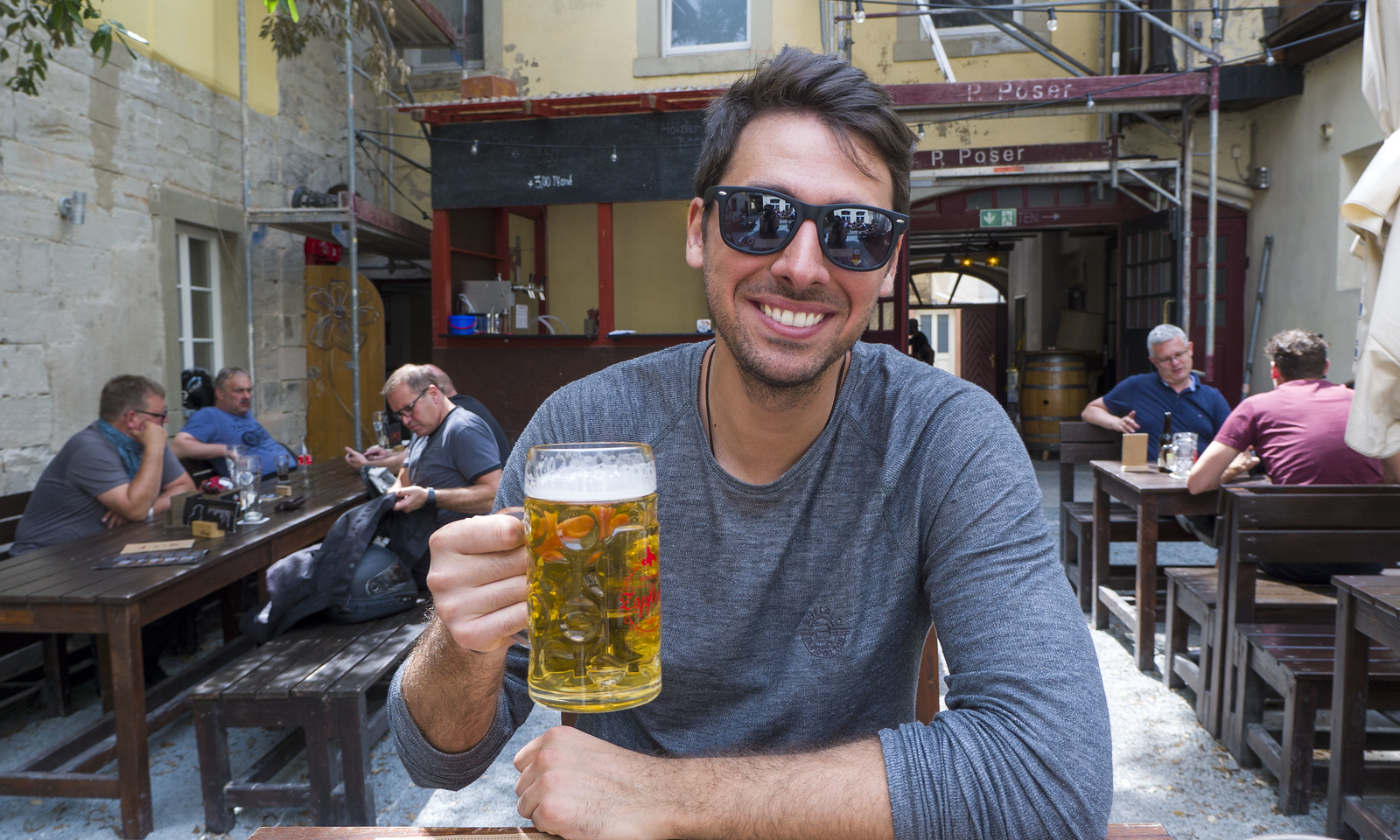 As we dined on many outdoor patios, Justin and I had tall mugs of beer with almost every meal in Bamberg. However, the best way to enjoy beer in Germany is by drinking at a beer garden.

On our last night in Bamberg, we checked out the beer garden called Spezial-Keller. The two of us tried Bamberg’s specialty, smoked beer for the first time. It’s also vegan, though it has a very distinct smoky flavour. Some people think it tastes like bacon, but I think it tastes a bit like a campfire. I liked it at first, and liked it less the more I drank it. Love it or hate it, smoked beer is definitely unique and something you should try if you’re in Bamberg. 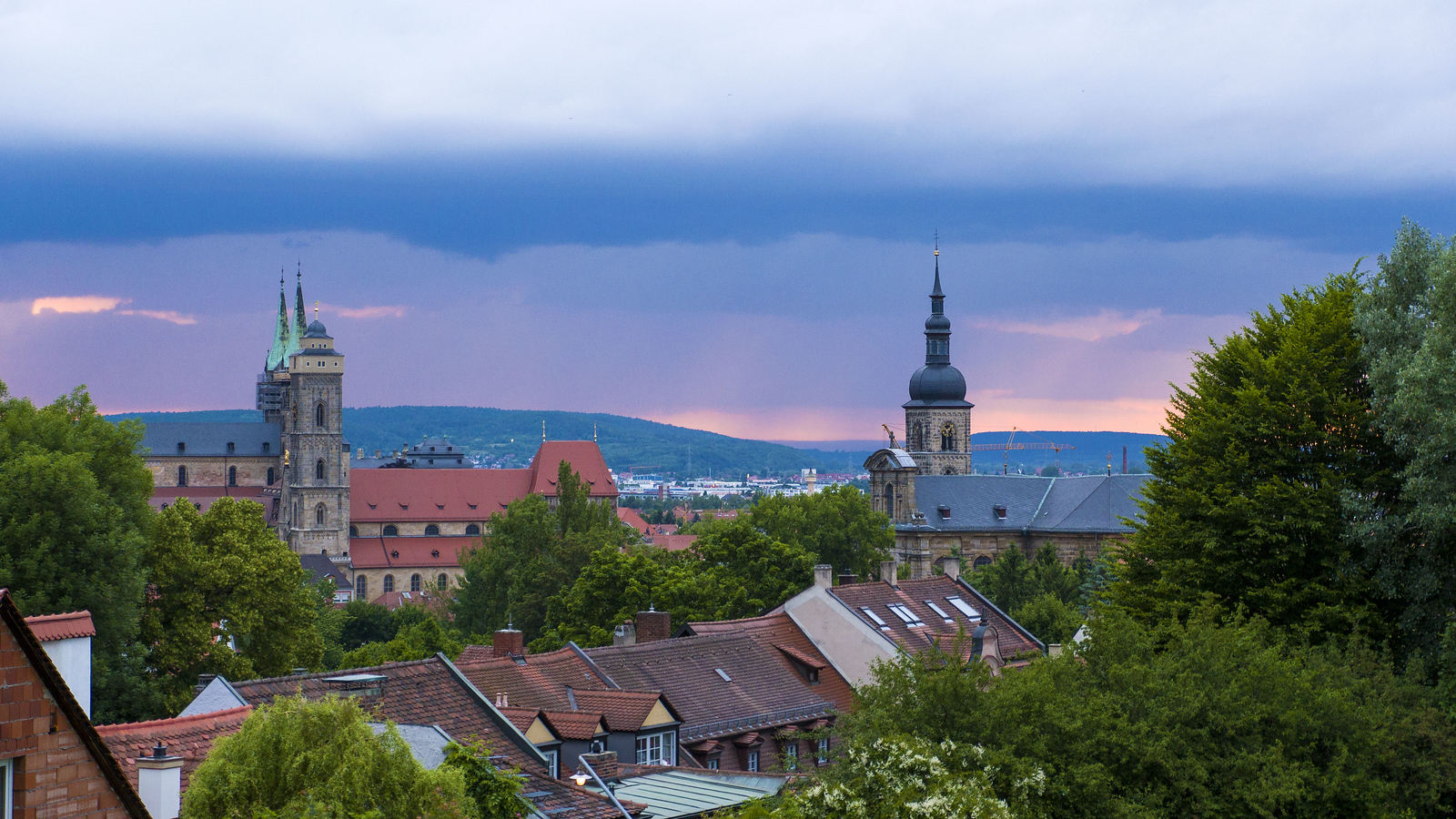 Kapuzinerbeck is a bakery in Bamberg with vegan options. I picked up several freshly baked treats for breakfast during our two mornings in Bamberg. Thankfully, this bakery was right down the street from our apartment. It was easy to take a stroll in the morning to pick up some goodies to start the day.

Although nothing was labelled as vegan and the store was always busy, the staff behind the counter were very familiar with what vegan meant. They pointed out two items that were vegan – the pretzels and the small bread rolls. This is a grab and go bakery, so bring your treats back to your apartment or eat them on the go. 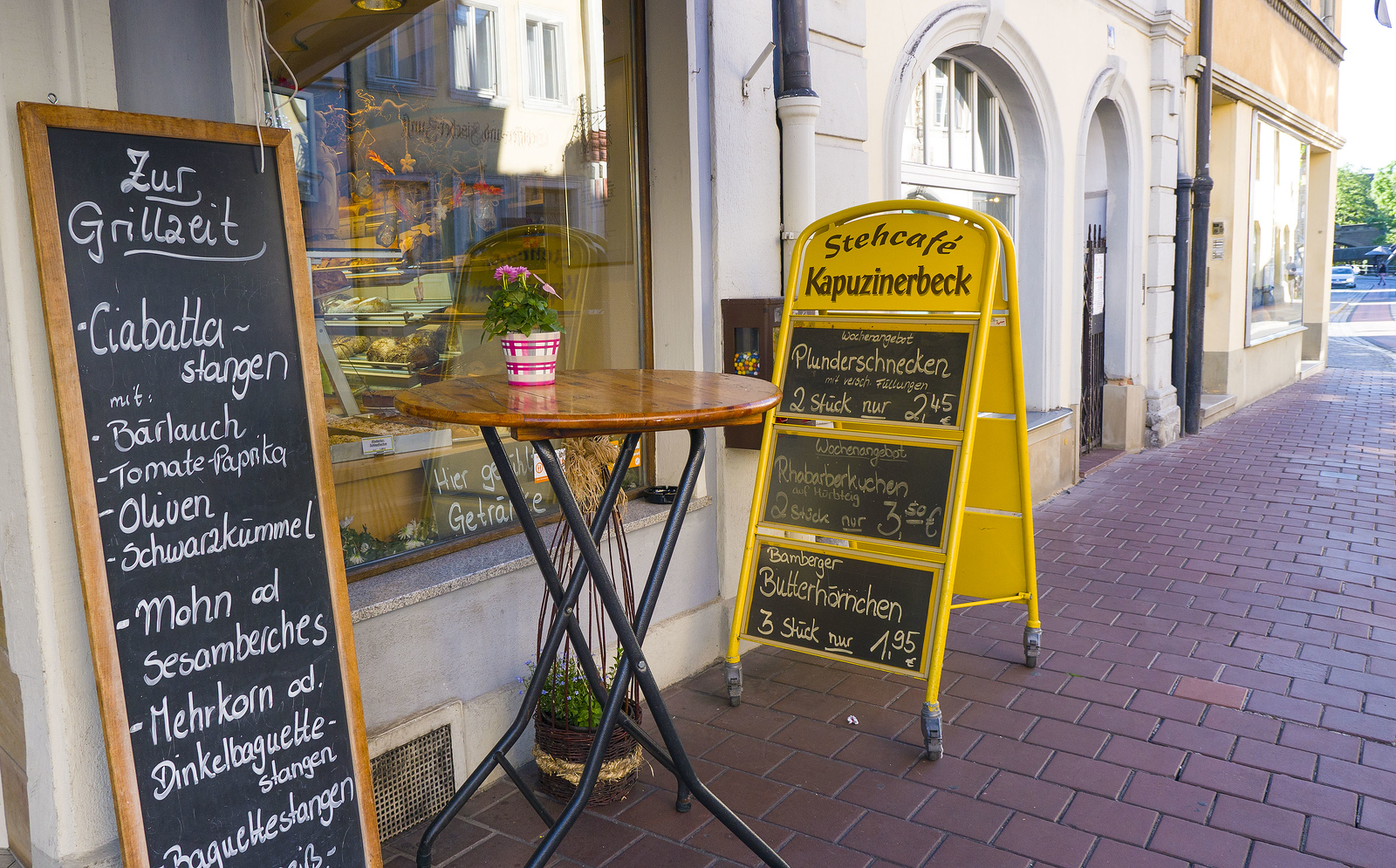 Hofcafe is near the university and offers several vegan and vegetarian meals on the menu. Dine up on the second floor patio overlooking a courtyard down below. Some things on the menu are marked as gluten-free, too. In addition to vegan meals, there’s a vegan breakfast option also offered, although I didn’t get the chance to try it.

Justin and I both ordered a plate of vegan penne made from corn, with olive oil, mushrooms, peppers, and spices. It was quite yummy! I’m such a fan of pasta (who isn’t!?) and I feel that this Bamberg vegan guide wouldn’t be complete with at least a plate or two of carb-heavy tastiness. 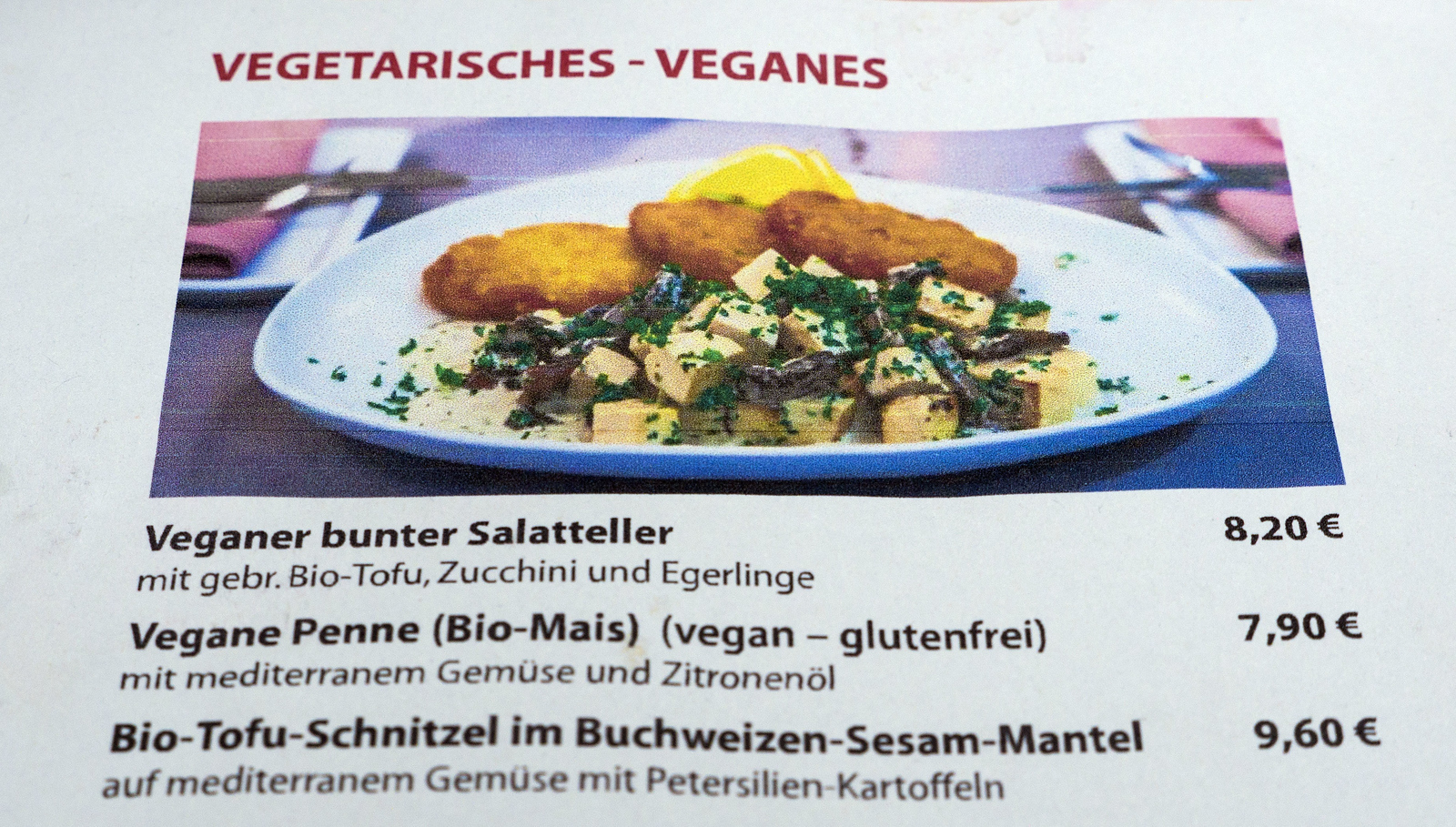 Zapfhahn is the place to go in Bamberg if you’re looking for a burger. While they also serve meat, the servers at Zapfhahn are very knowledgeable about vegan and vegetarian options. Just mention to your server that you’re vegan, and he or she will hook you up with the best vegan options. You can substitute most burgers with a vegan bean patty, and there’s also a pulled jackfruit burger. There are fries that are vegan, and you can choose from a few different vegan dipping sauces. Everything is clearly labeled on the menu, too.

Right around the corner from Hofcafe, you’ll find an Italian restaurant called Spaghetteria Orlando. While not an entirely vegetarian or vegan restaurant, there’s a separate vegan section of the menu. Choose from six different vegan pastas. I got the Aglio Olio Peperoncino (olive oil, garlic, chili, parsley) and Justin got the All ‘Arrabiata (peppers, tomato, chili – hot!). This restaurant actually reminded us a lot of Italy. The pasta was delicious!

And of course, we ordered more beer. When in Germany…

Save room for dessert! While it might not be too difficult to find a vegan burger or pasta dish, vegan desserts can be a little more elusive. I actually stumbled upon SpitzRein Cafe. When walking past, I swear my vegan radar vision kicked into gear and I saw something that said “vegan” on it. We walked into the cafe and found an assortment of vegan desserts, including chocolate raspberry cake and a berry crumble. Many of the desserts are also gluten-free. I’m glad I found this place as I feel this Bamberg vegan guide would be incomplete without a dessert place.

Even though we were far from hungry, Justin and I bought a piece of the cake to eat later on back at our apartment. This is also a really cute spot to stop for coffee or tea. There’s a small seating area outdoors, which would be the perfect vantage point for people watching. 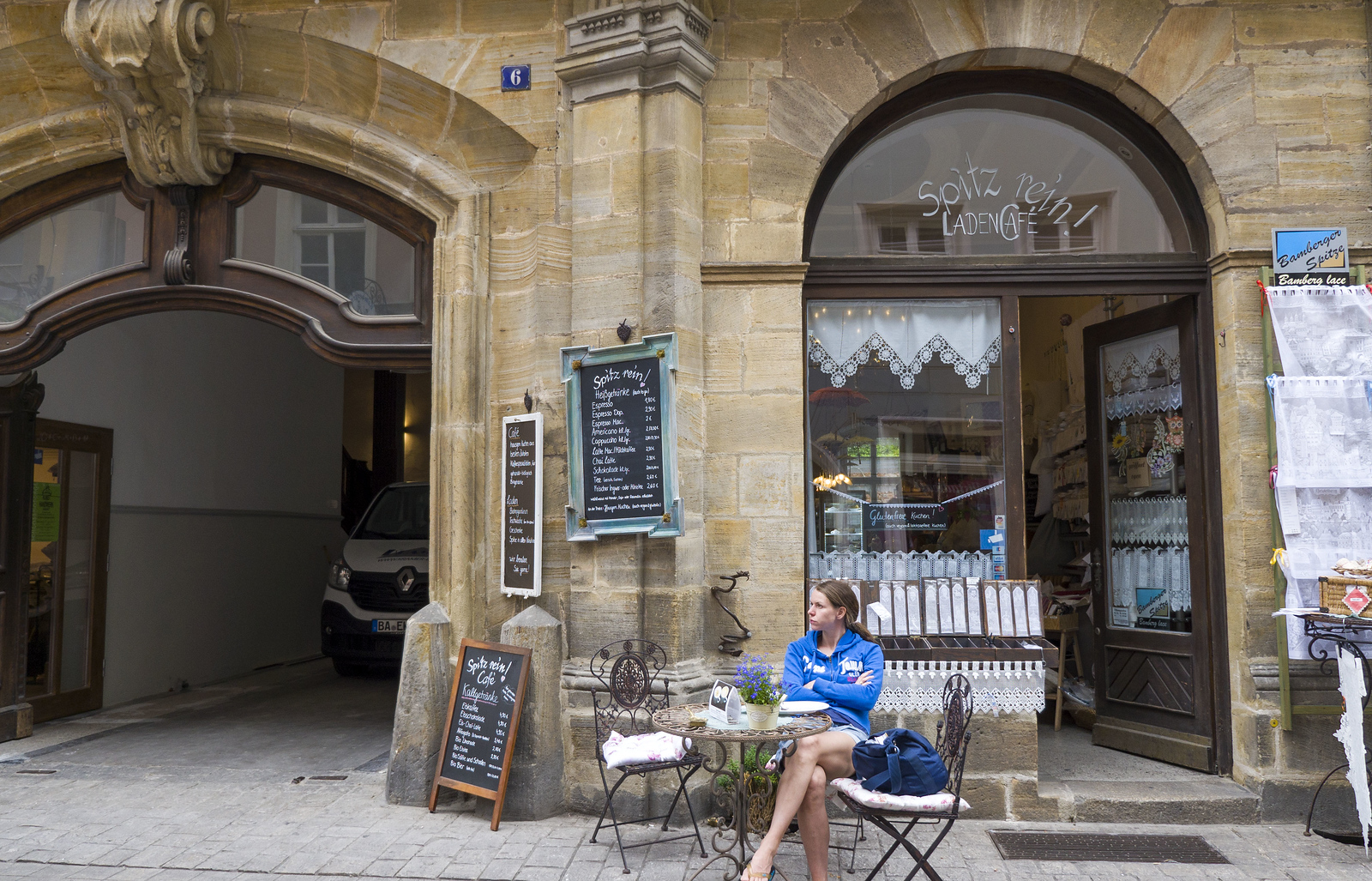 Looking for more vegan food in Germany? Check out my vegan Berlin dining guide and an awesome vegetarian hotel we stayed at in Berlin.

By no means is this Bamberg vegan guide the complete restaurant listing for the entire town. There are loads of vegan options all over the place. Since we visited, there’s a vegan food trailed called Vegbereitung. You’ll have to try it and let me know how the food tastes. There’s also a vegetarian cafe called Cafe Zuckerl that looks spectacular, although it was a little out of the way for us without transportation.

Check out more photos of Bamberg in my travel photo album. You can also purchase housewares, prints, canvas photos, and more directly from my photography site.

Looking for a hotel or apartment in Bamberg? Check out an assortment of listings for every budget! 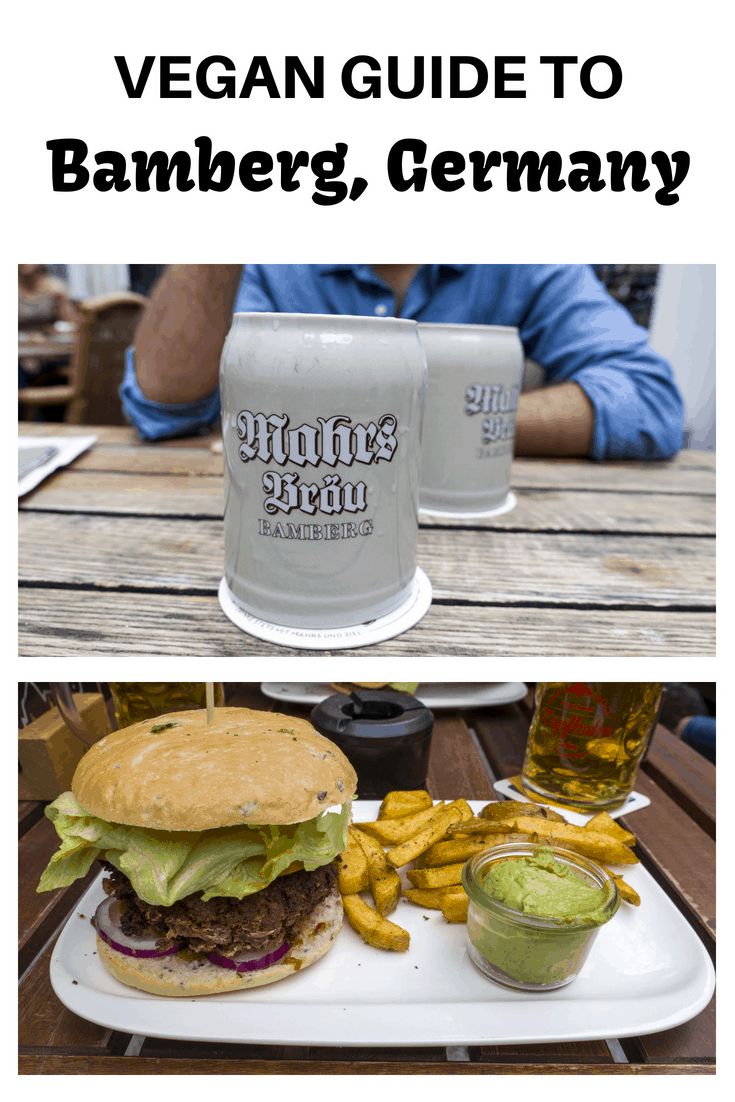 Have you sampled vegan eats in Germany yet?