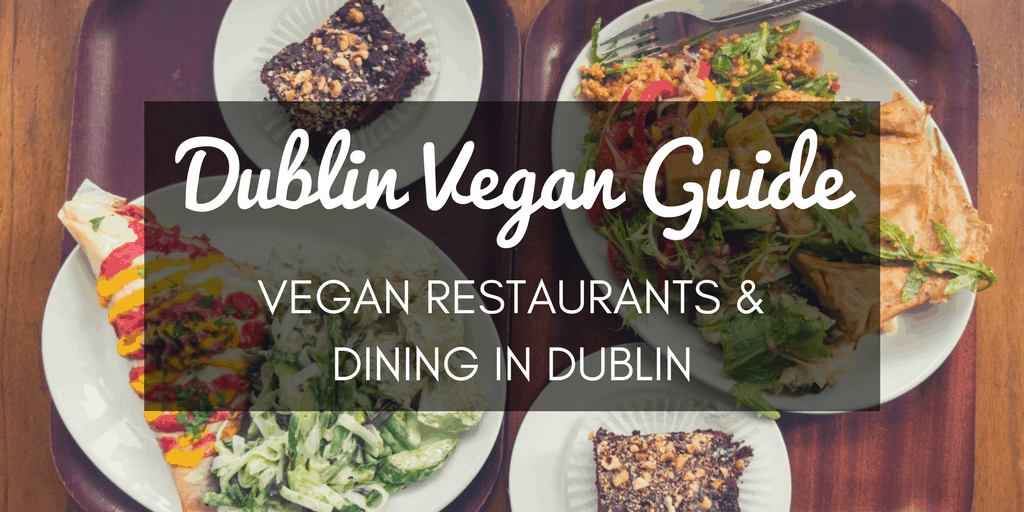 Dublin is a very vegan-friendly city – and don’t let anyone tell you otherwise!

Before travelling to Dublin, I kept hearing that Ireland was not a great country for vegans to visit. I heard numerous times that I wouldn’t be able to find much to eat. In doing my research before my trip, I discovered that Ireland isn’t just an up and coming destination for vegans. There are an abundance of vegan eateries, and even vegan food festivals and vegan food tours.

When you travel to Dublin, you’ll discover a vast array of vegan restaurants as long as you know where to look. I only had a couple of days in the city, and there wasn’t nearly enough time to eat everywhere.

Here are my recommendations for vegan restaurants in Dublin, including vegan options for tours and festivals.

The tours are led by a vegan couple named Scott and Sivan. They’re both very sweet, upbeat, and have a kind way of discussing and introducing vegan ideas.

You don’t have to worry about any kind of judgment being passed if you’re not vegan on this tour. It’s all about learning and trying new foods, as well as sharing the positive effects of choosing a plant-based lifestyle.

We tried a wide variety of food at restaurants that were all within walking distance of one another. On the tour, we ate quinoa salad, bruschetta toast, garlic potatoes, a tofu curry, two vegan pizzas, garlic fries, curry cheese fries, vegan chicken nuggets, three decadent desserts, and more. We indulged in vegan beer, wine, and a homemade vegan Bailey’s Irish liqueur.

Show up hungry, and leave completely stuffed. I definitely enjoyed the yummiest samples from vegan restaurants in Dublin.

Tours run on Wednesday evenings (this is the one I tried), and there’s also a different tour on Saturday afternoon with afternoon tea and coffee. I’ll have to return to try that one out! 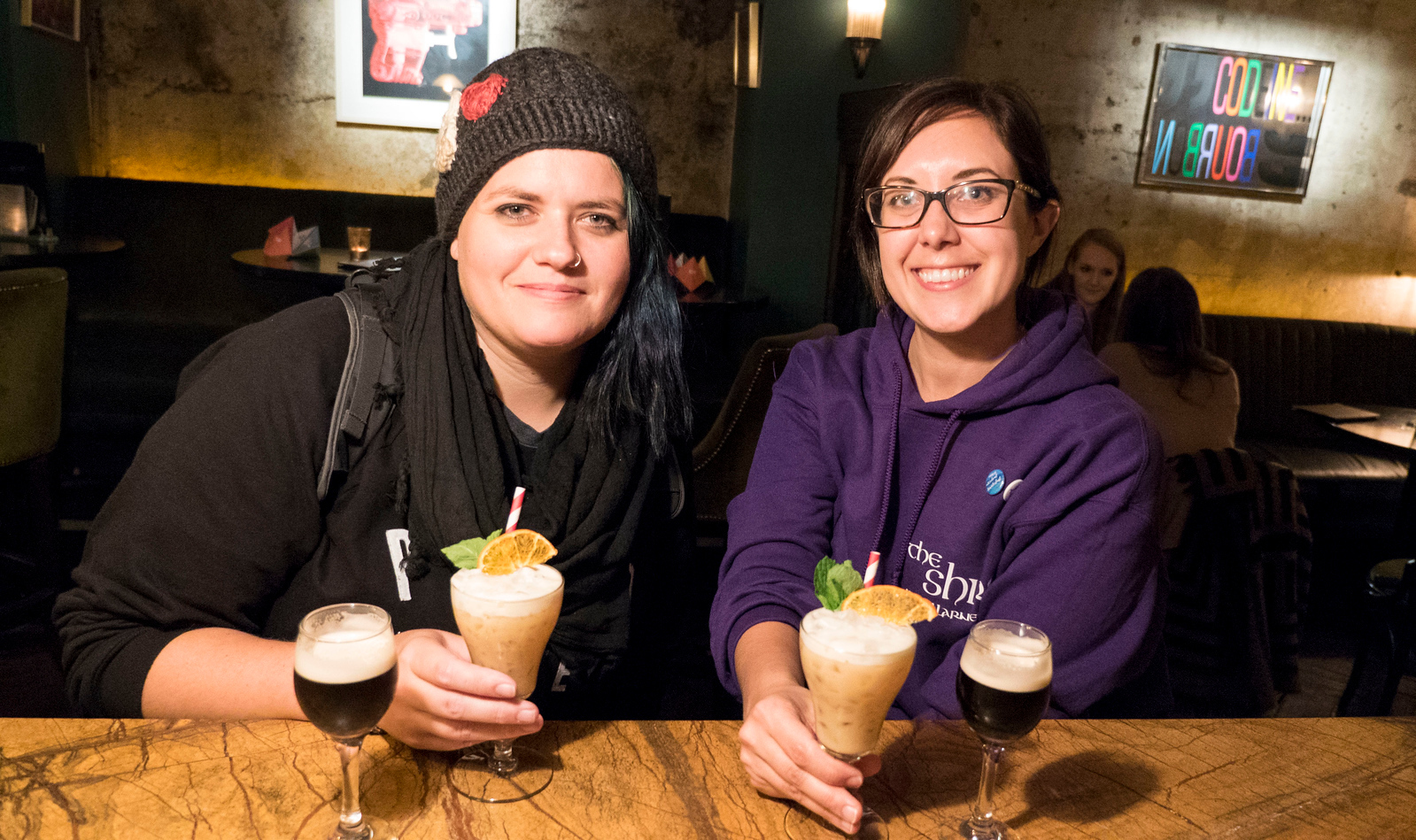 To learn more about booking your tour, check out my article about Vegan Dublin Food Tours.

While I only got the chance to dine at a small percentage of the vegan restaurants in Dublin, I thoroughly enjoyed everything that I ate and highly recommend you try them for yourself.

Everything is made fresh. There’s an emphasis on local and organic ingredients wherever possible. Every selection tastes like a home cooked meal, prepared with love and care.

You can visit for breakfast, lunch, or dinner, with various menu offerings during different times of the day. Vegan items and allergens are clearly marked on the menu board.

Every day, they serve up two soups, five main courses, ten salads, wraps, and hummus plates. I recommend ordering a main course with two salads. And if you can manage, be sure to choose a dessert, too.

For my main course, I enjoyed a pastry pocket filled with a mix of mushrooms, eggplant, chickpeas, beetroot, and peanuts. As for my two salads, I ordered the Asian noodle salad with cucumber and asparagus, as well as the garlic potato salad.

While I didn’t get the chance to try a full meal there, Sova Vegan Butcher is a crowd pleasing vegan restaurant in Dublin. They’re open for brunch during the afternoon and dinner in the evening. With a creative menu that will win over the omnivores in the crowd, take all of your friends to Sova for a great start to a night on the town.

I had the opportunity to sample two desserts from Sova on my Vegan Dublin Food Tour, and they were divine.

Visiting a local chipper is something you simply must do while you’re in Ireland.

McGuinness has a whole vegan menu in addition to their traditional menu. As it turns out, the owners both went vegan and decided to launch a fully plant-based menu. That way, anyone following a diet devoid of animal products could visit the chipper, just like their meat-eating pals.

If you’re looking for anything deep-fried, greasy, or a snack that will hit the spot after a night at the pub, McGuinness is the place for you.

Aperitivo is a pizza place specializing in vegan pizza. While they don’t serve exclusively vegan pizza, it does make up half of their menu. The pizza offerings here are quite original and ranging in variety.

On my vegan food tour, we sampled a gluten-free, marinara pizza topped with vegan cheese and gluten-free seitan. The other pizza was the “Vegan Green” with a pesto base, peppers, sweet corn, zucchini, and artichokes.

As you can see, there are several different vegan pizzas to try, so you can sample something new every time you visit. Yum! 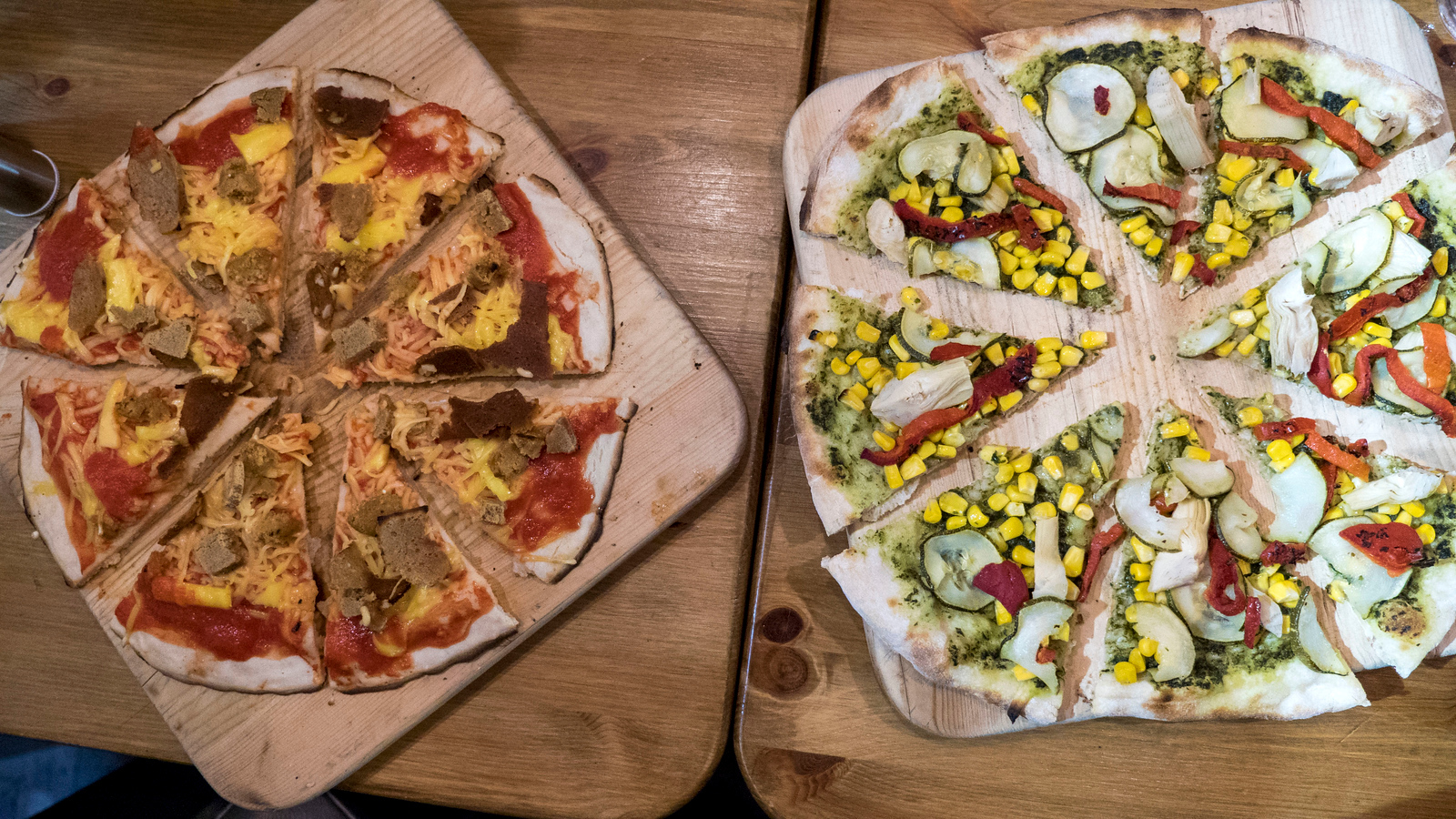 While I went to one of their locations in Wicklow (just outside of Dublin), there’s also a Happy Pear location in Clondalkin, Dublin.

The Happy Pear isn’t just a restaurant focusing on healthy food, it’s a massive vegetarian brand that’s swept the country. They have two cafes, a farm, and a product line.

The restaurant is vegetarian with the vegan items clearly marked. I visited The Happy Pear for breakfast on the way into Dublin at the end of my epic three week road trip of Ireland. I enjoyed a vegan croissant, some bread and jam, and a chia pudding.

Don’t feel like cooking…or leaving your apartment or hotel? I don’t blame you! Sometimes you just feel like relaxing for the afternoon or evening without getting up.

Enter Deliveroo. Deliveroo has a vast selection of vegetarian takeaway from restaurants near you. Just search “vegetarian” or “vegan” on their website, type in your address, and you’ll see the options. Select what you’d like to get and it will arrive at your place shortly after you order. Easy peasy!

Naturally, they have options for meat eaters and vegetarians alike, for breakfast, lunch or dinner. Just search through the site’s dozens of categories for whatever you feel like eating.

When I checked out the vegan options at Deliveroo, I found six in Dublin and a whopping 18 vegetarian restaurants. I know there are hundreds of other vegetarian or vegan-friendly items you can order from other establishments, too.

Here are a few of my favourite Deliveroo vegan options in Dublin:

Blazing Salads is a vegetarian, whole food deli with meals prepared using high quality ingredients. From Deliveroo, you can order their soup of the day, a vegan health treat box, a vegan samosa plate, salad bowls, and even a pizza platter.

JEWEL IN THE CROWN

Cocu is an Irish restaurant serving up healthy meals with a Middle Eastern influence. You can find a vegetarian hot pot, a bombay bowl, hummus wraps, smoothies, and even raw desserts like Snickers bars.

It was meant to be. Dublin Vegfest happens just one weekend a year, and it happened to be the weekend I was visiting Dublin! How lucky was that?

I thoroughly enjoyed walking around the grounds and eating as much food as I could. There were tons of local businesses with delicious eats that I couldn’t find back at home.

Here’s some of the things that I ate, and what I wished I could have eaten. Be prepared to get hungry by looking at these photos.

Trust me, you’ll want to take a tour of the Guinness Storehouse in Dublin. You can spend all afternoon exploring the several levels of exhibits, which detail everything relating to this famous Irish beer. You’ll learn about its history, the brewing process, and even the advertising campaigns over the years.

At the end of the tour, enjoy a pint of Guinness at the Gravity Bar from the top floor. Savour your beer while taking in spectacular 360 degree panoramic views of Dublin’s skyline. 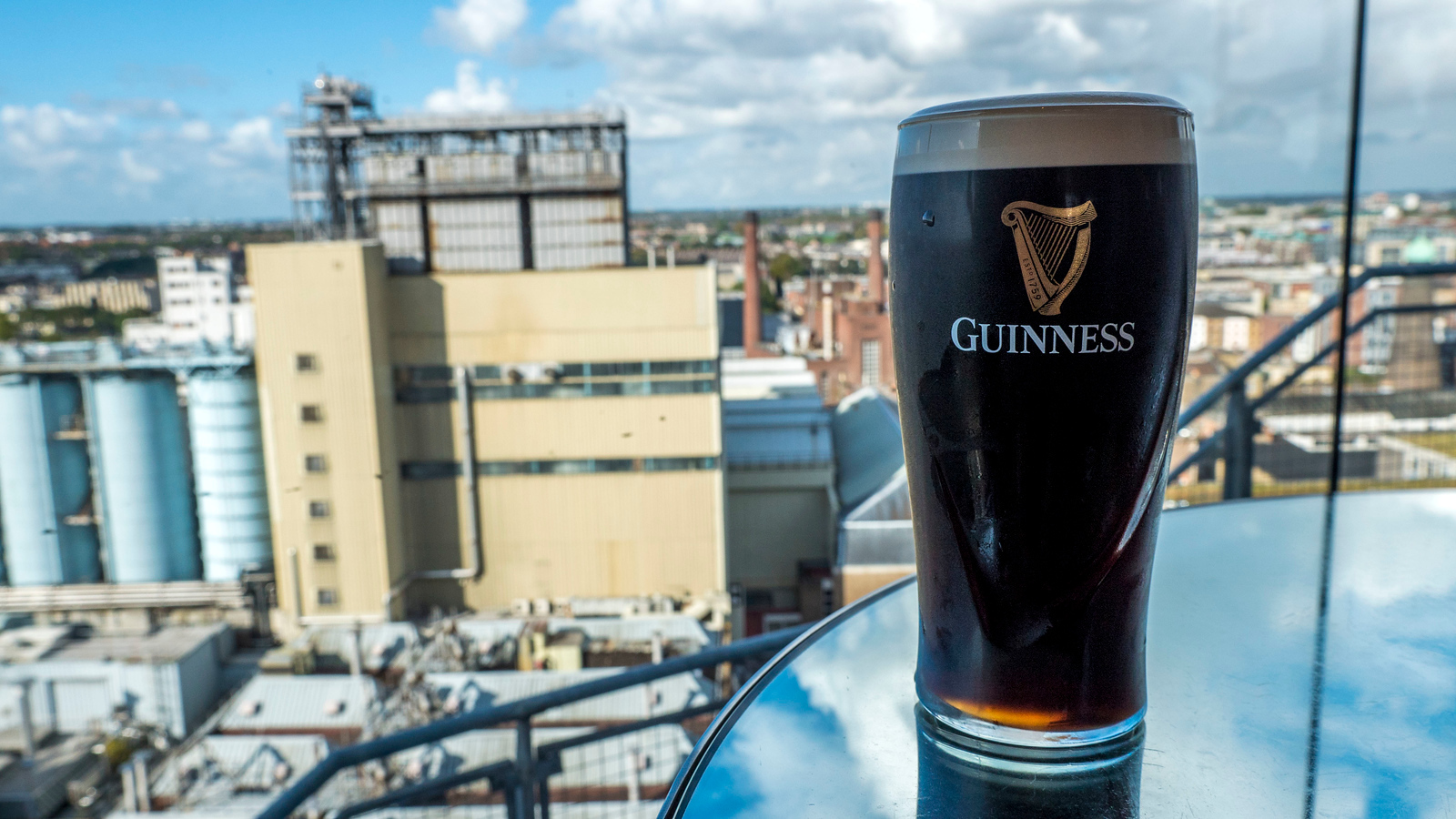 Don’t let anyone tell you otherwise: Dublin is extremely vegan-friendly and you won’t run out of food to try while you’re there. Even though there just a few vegan restaurants in Dublin, there are so many vegetarian and vegan-friendly ones. Veganism is only growing in the city, with introductions of vegan festivals, vegan food tours, and vegan food delivery options.

Interested in seeing more photos from my trip to Dublin? Check out my entire Dublin travel photo album. You can purchase prints, housewares, phone cases, and more from any of my pictures! Makes a great gift for travel lovers.

Looking for a place to stay in Dublin? Check out the two different Airbnb apartments I called home in Dublin. 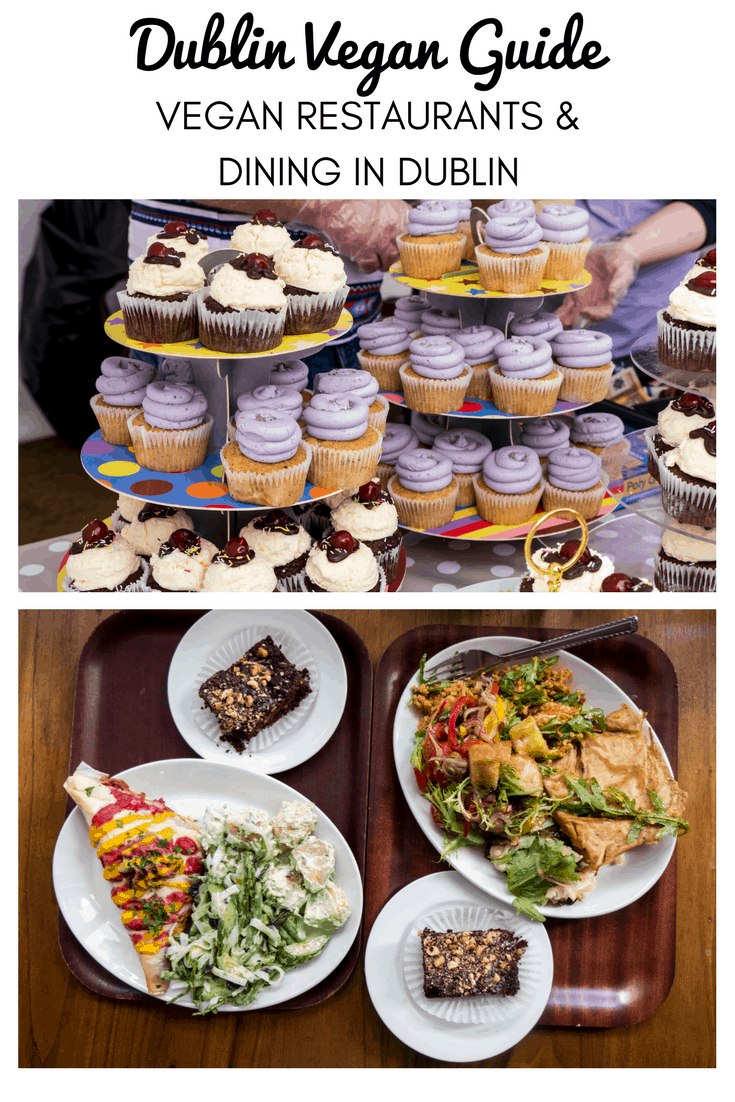 Pin this image to your Pinterest for future reference.

Have you ever travelled to Dublin or tried any of these awesome restaurants?