When you travel to Italy, you must eat one of the country’s most beloved delicacies: gelato! If you don’t consume dairy products or eggs, don’t fret. You can still enjoy this tasty treat.

Many gelato shops in Italy have fruit sorbettos, which are almost always vegan. Milk isn’t usually used in the fruit gelato. However, the coconut gelato usually has milk in it. It’s best to ask in advance if the gelato is vegan-friendly.

Thankfully, there are lots of places to find vegan gelato in Florence. Here’s a roundup of my favorites.

They have an entire case dedicated to vegan gelato. You’ll find several fruit flavors. It’s generally easier to find fruit gelato, so we both opted for the vegan-friendly varieties of vanilla, chocolate, and hazelnut. Perche No serves a chocolate sorbetto, which was more difficult to find. I recommend that you order a mix of all three flavors as they taste so delicious together. 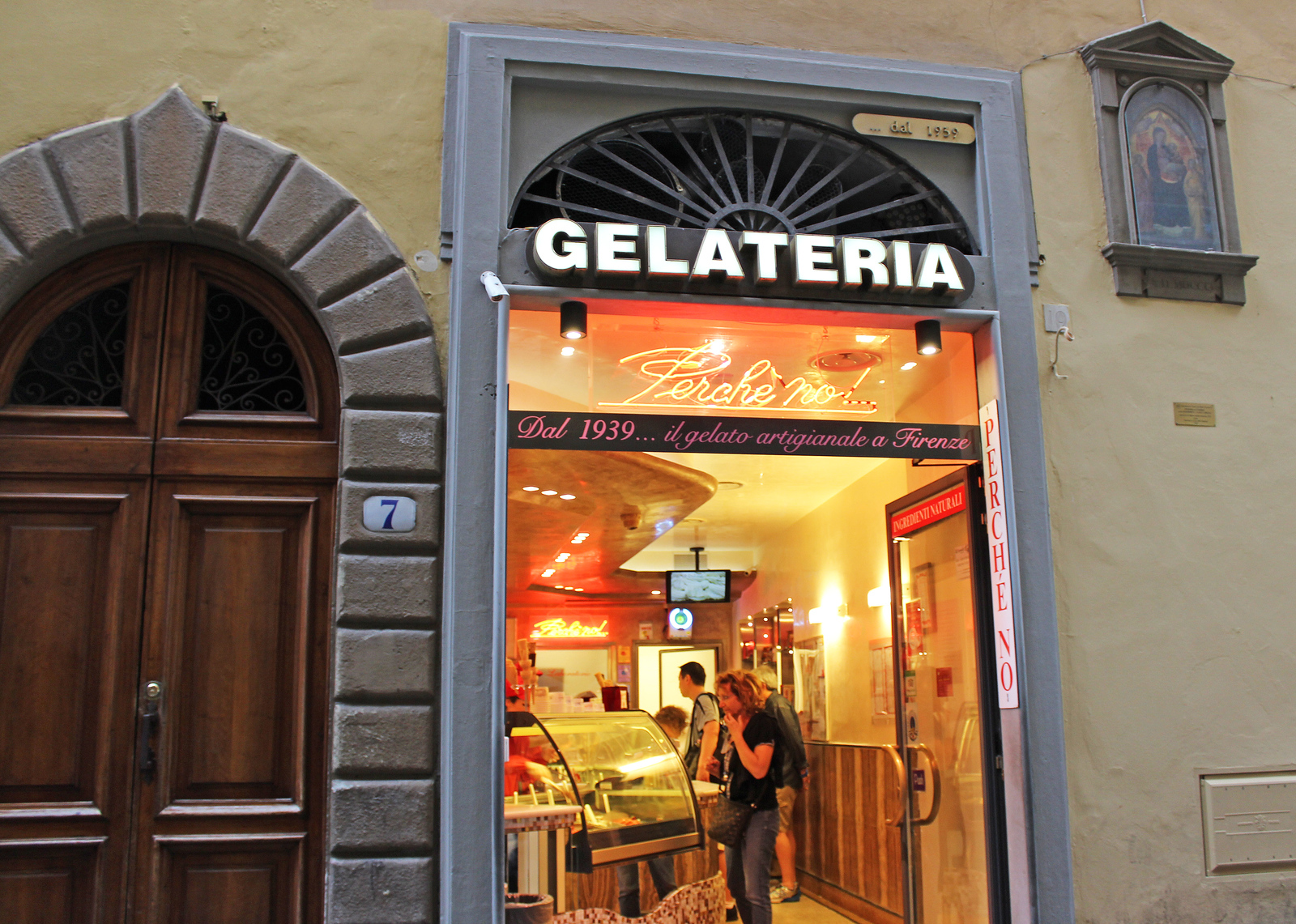 We stumbled upon this cafe by accident. It’s a juice and smoothie shop that also happens to serve gelato. They also have vegan food options, including wraps, sandwiches, and salads. One of their salads is even called “Vegan”, and there’s a wrap called “Vegana”! You can view the whole menu at their website.

They had a few choices of fruit gelato. I got a combination of strawberry and banana. It was smooth, creamy, and delicious. Perfectly refreshing on a hot day! 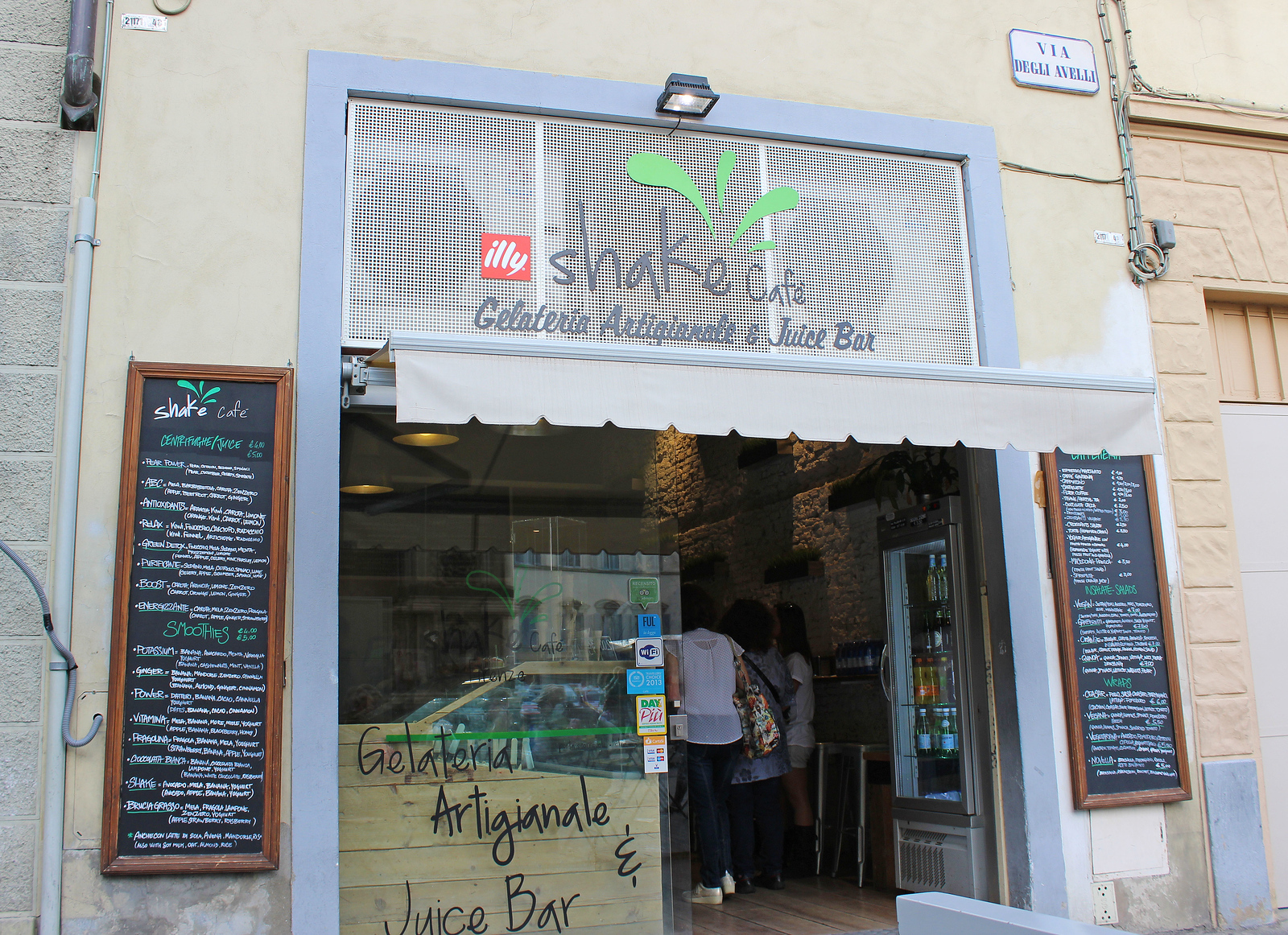 There are many, many other places to find vegan gelato in Florence. We’ll just have to return someday to try them all.

Reported to have two flavors made with soy milk (vanilla and hazelnut), but the flavors rotate. There’s also fruit gelato, too.

There are a few flavors of gelato here that are vegan, mostly fruit varieties.

There are a few vegan sorbets, including a chocolate sorbet.

This is a raw, vegan restaurant in Florence that offers gelato made with coconut water.

Right across the piazza from one of our favorite vegetarian restaurants, 5 e Cinque, you’ll find Gelateria della Passera. They have a wide selection of fruit gelato, and one gelato made using almond milk. Have you tried gelato in Florence?

I am so hungry for ice cream after reading this post!

Perche No was my favourite Gelato in Florence too, but I totally missed they had a vegan section - this is cool because I can now totally recommend to all my vegan friends. can't wait to get back to Florence and try out your other recommendations!

Didn't know there's also a vegan gelato! Interesting!! I'd love to munch on some next time! Xx

Wow! So many cosy places to try Gelato in Florence. The ambience of these places looks so pretty. And your pictures make me drool :)

Great recommendations. It is good to know there are some vegan options too. From the ones you mentioned, I have only tried Venchi. It was delicious. I may have to go back for the rest...