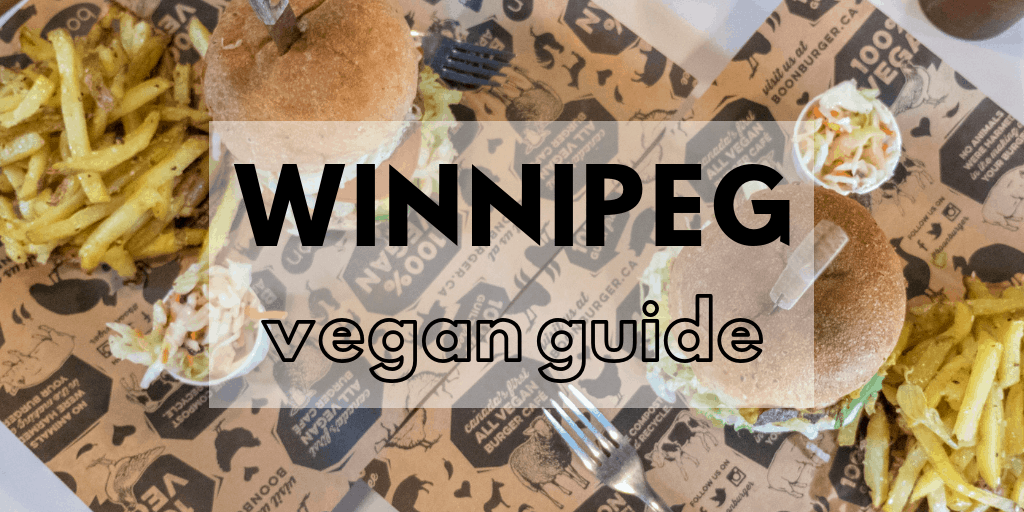 Looking for vegan food in Winnipeg? You’ve come to the right place!

It was our first time visiting Winnipeg (and the province of Manitoba). When I’m traveling to a brand new city, my first thought focuses on what I’m planning to do there. My second thought quickly drifts to the important question of food. Are you as obsessed with finding a good meal as I am? I’m constantly trying to track down the best vegan meals around the world, and I am certain that I found some of the best vegan restaurants in Winnipeg. While not a vegan haven quite yet (I’m sure Winnipeg will be crawling with even more establishments as veganism grows in popularity), you’ll find more than enough plant-based meals to be satisfied. After all, the very first Boon Burger restaurant is here, which definitely means something! Don’t know what Boon Burger is? Read on to learn more! 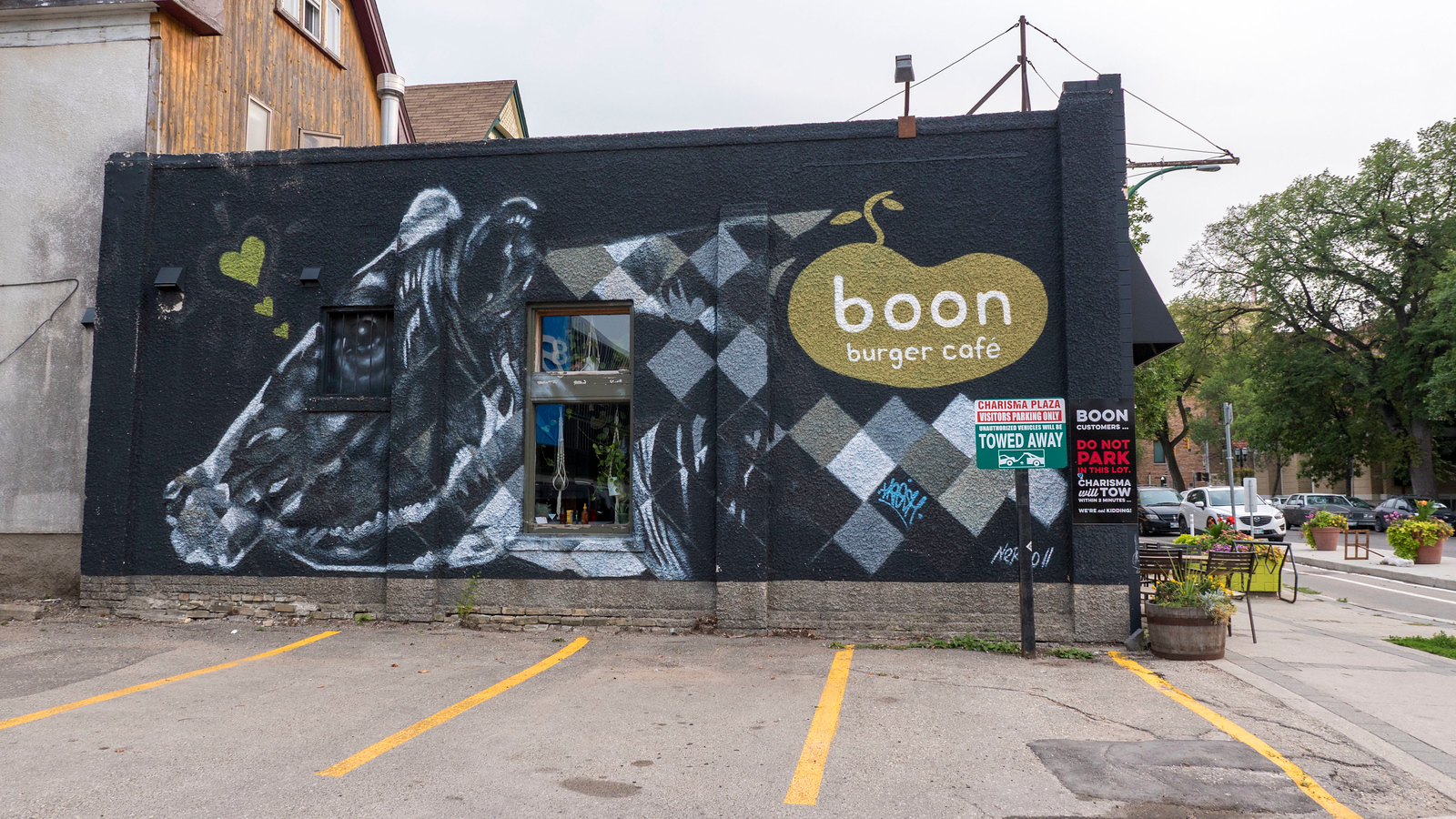 Boon Burger is the first vegan burger restaurant in Canada, and it happens to be in Winnipeg. Moreover, Boon Burger has rapidly expanded into Ontario, opening several stores in Barrie, Burlington, Guelph, Oakville, Hamilton, and more are opening all the time. Needless to say, Boon Burger is delicious and a hit among vegans and meat eaters alike. Even though we eat at Boon Burger all the time back home, we couldn’t resist trying food from the restaurant where it all began. 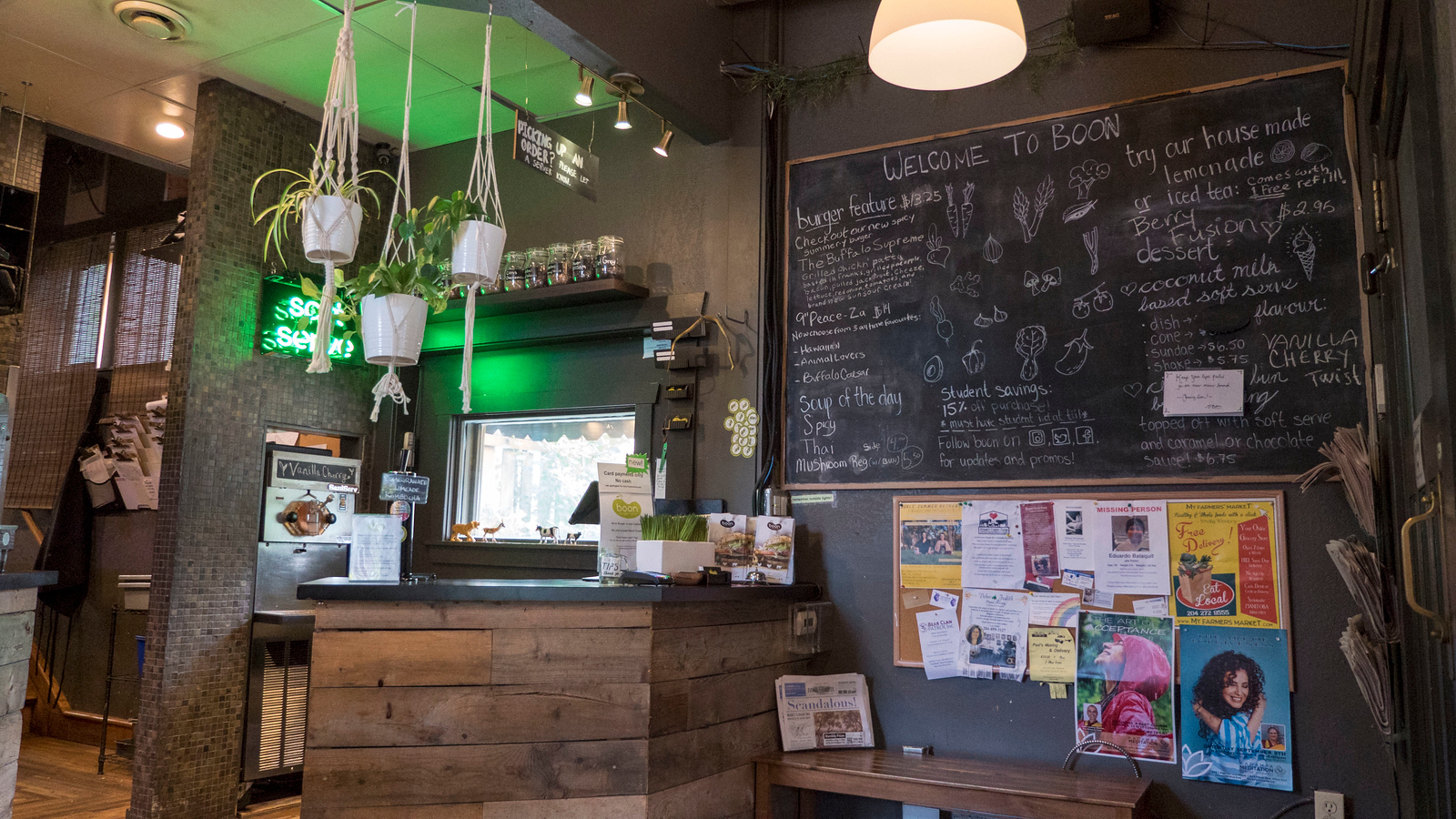 The Boon Burger menu is constant across all of their restaurants. Essentially, there are tons of burger options in every flavour imaginable. Our favourites are the Jalapeno Chedda burger and the Mexican burger, which are the ones we ended up ordering, too. In addition to burgers, they have pizza (dubbed “peace-za”), fries and poutine, salads, and dessert (notably the soft serve ice cream). Their food is not processed and prepared fresh daily using the best ingredients possible.

In addition to serving an entirely plant-based menu, Boon Burger is as close as it gets to being a zero waste restaurant. With the exception of some of the packaging they receive, all waste at their restaurants is either compostable or recyclable. Not only is a vegan meal far better environmentally, but Boon Burger goes the extra mile to reduce their environmental footprint. It’s safe to say that Boon Burger gets my top vote out of all the vegan restaurants in Winnipeg. 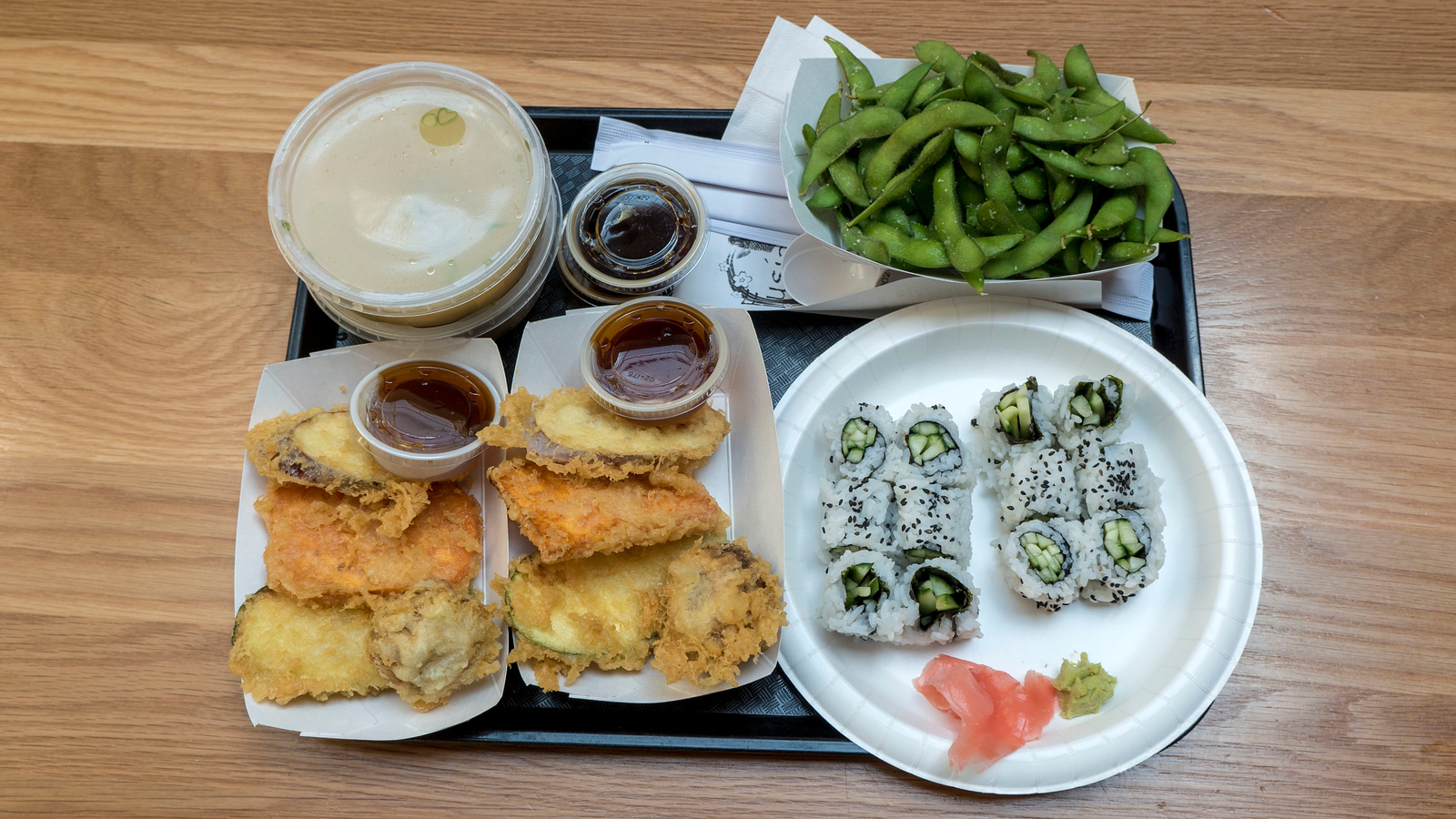 A trip to Winnipeg wouldn’t be complete without visiting The Forks. Situated on the waterfront, The Forks is right where the Red River meets the Assiniboine River. Historically, this site was a meeting place even 6000 years ago. Indigenous peoples traded here, and then European fur traders gathered at this location. Nowadays, it’s a centre for dining, shopping, events, entertainment, recreation, and community. 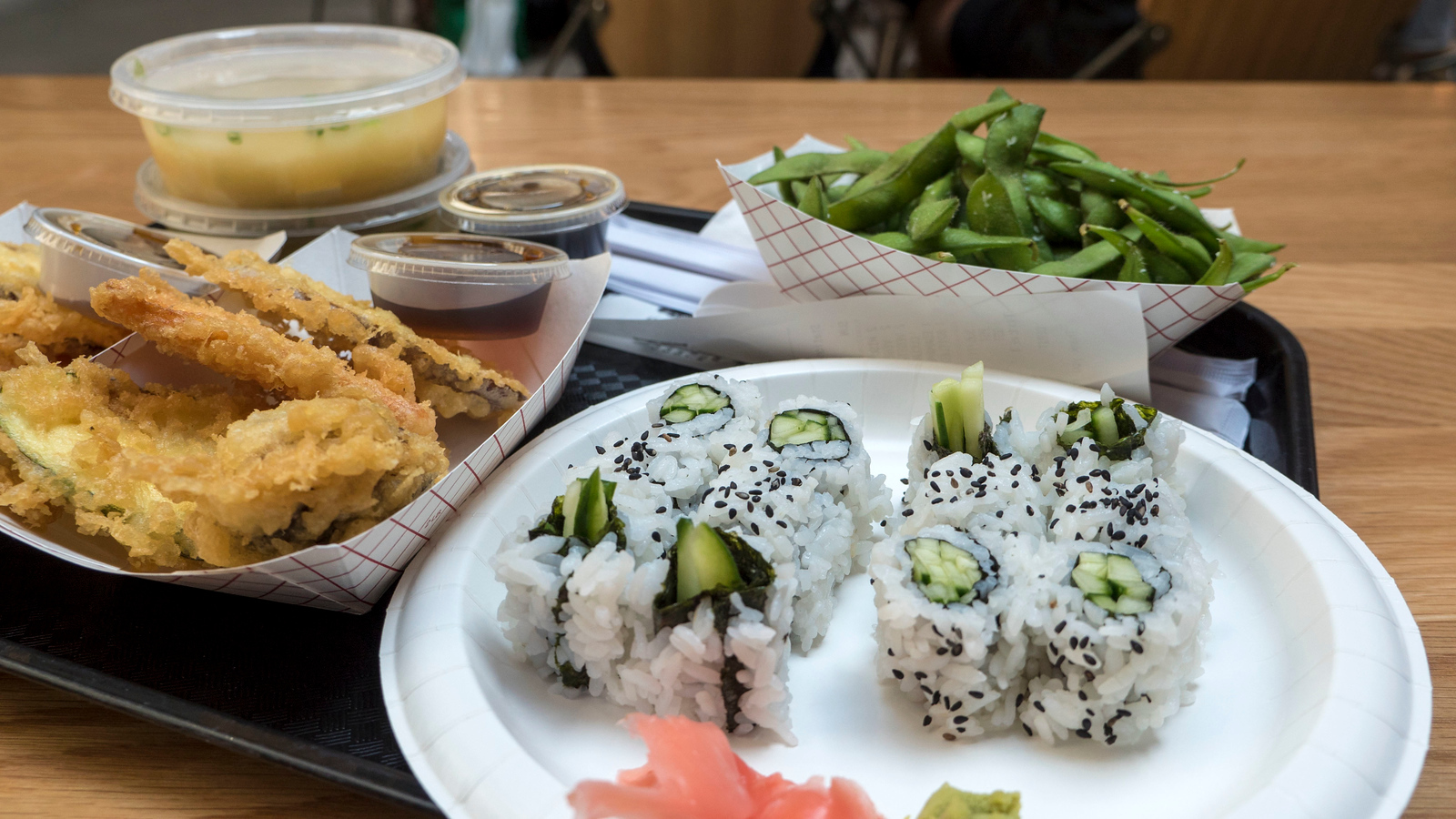 Don’t skip the opportunity to dine at The Forks. Fusian Sushi has a lot of vegan selections, including cucumber rolls, avocado rolls, vegetable tempura, edamame, and miso soup. We ordered a little bit of everything. While it’s not one of the vegan restaurants in Winnipeg, it’s got enough vegan and vegetarian options to make it a worthwhile stop. Check out this vegan guide to The Forks for a full listing of vegan and vegetarian options.

Thermea is a traditional Nordic spa where you can fully indulge in a wellness experience. This ancient Scandinavian ritual provides numerous health benefits, including eliminating toxins, stimulating circulation, and providing an overall sense of well being. Move through the thermal cycle from hot to cold to relaxation to benefit completely. After relaxing in various pools and saunas, you might be hungry or thirsty. Thankfully, you can indulge in some vegan options at Thermea Spa. 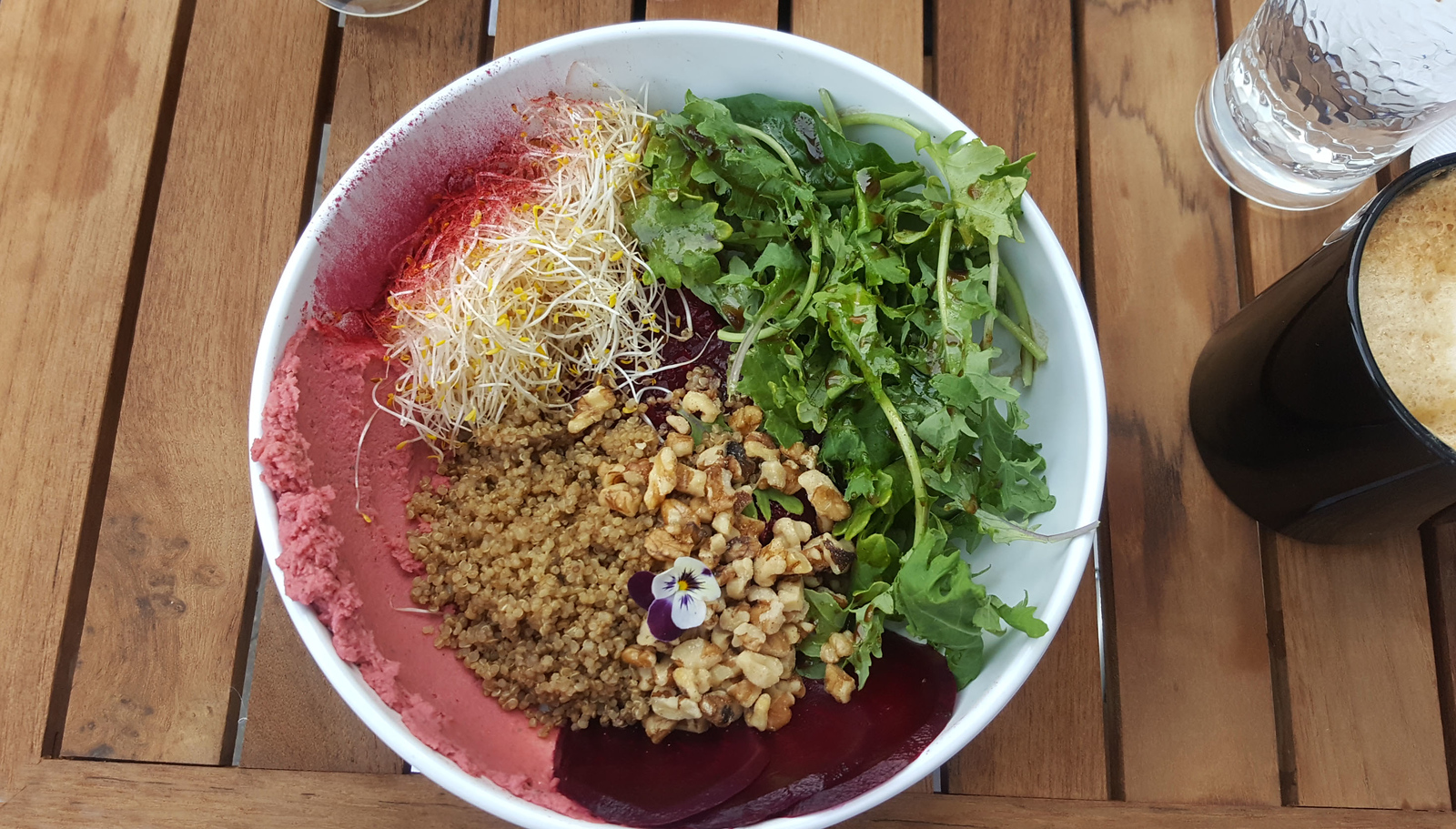 It’s the first restaurant I’ve dined at where I’ve worn a bathrobe! We dined outdoors with our fluffy robes on top of our bathing suits for a very comfortable experience, as one does at a spa. Thermea isn’t one of the vegan restaurants in Winnipeg, but they have one plant-based option on their menu: a healthy bowl with quinoa, mushrooms, beets, beet hummus, arugula, and walnuts. We were grateful for such a tasty vegan, flavourful, and thoughtful meal. Thermea grows many fresh ingredients right on site. I also enjoyed a soy latte, which was warm and comforting. In terms of Winnipeg vegan options, it was a big success. After all, I couldn’t see anyone not enjoying this beet hummus! 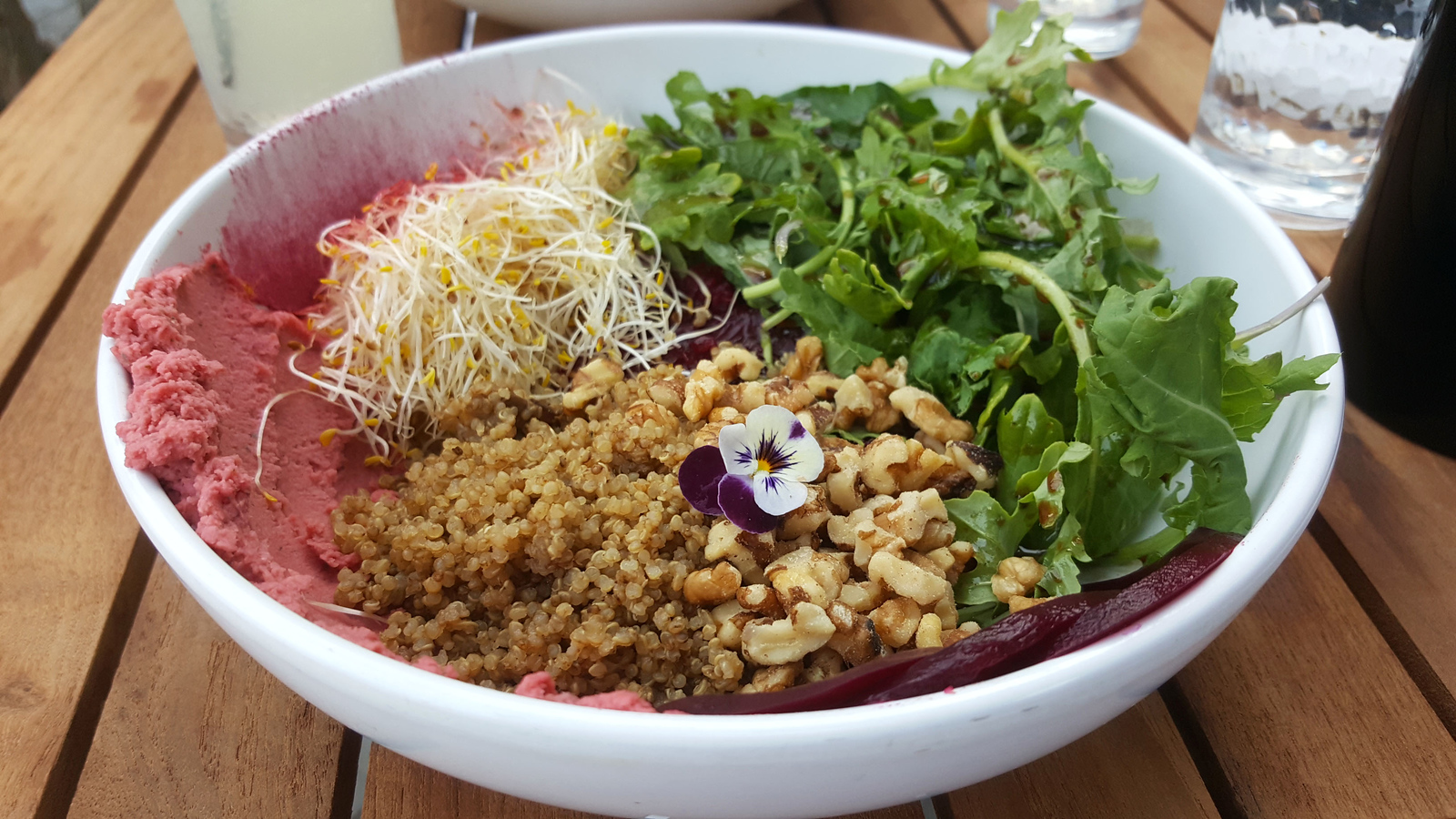 Start the day off right by eating a hearty and yummy breakfast at Clementine Cafe. While it might not appear that there are many vegan options on the menu, Clementine is very vegan-friendly and willing to adapt several dishes. Our server was very knowledgeable of a vegan diet and shared every possibility for us to eat. Justin ordered the porridge, which was already vegan. The porridge consisted of mixed grains, coconut, pineapple butter, berries, and cashews. I ordered two sides: the baby red potatoes, and the cashew and banana chia seed pudding with peaches, plums, and granola. If you’re looking for a healthy way to start the day, be sure to stop by Clementine in Winnipeg. 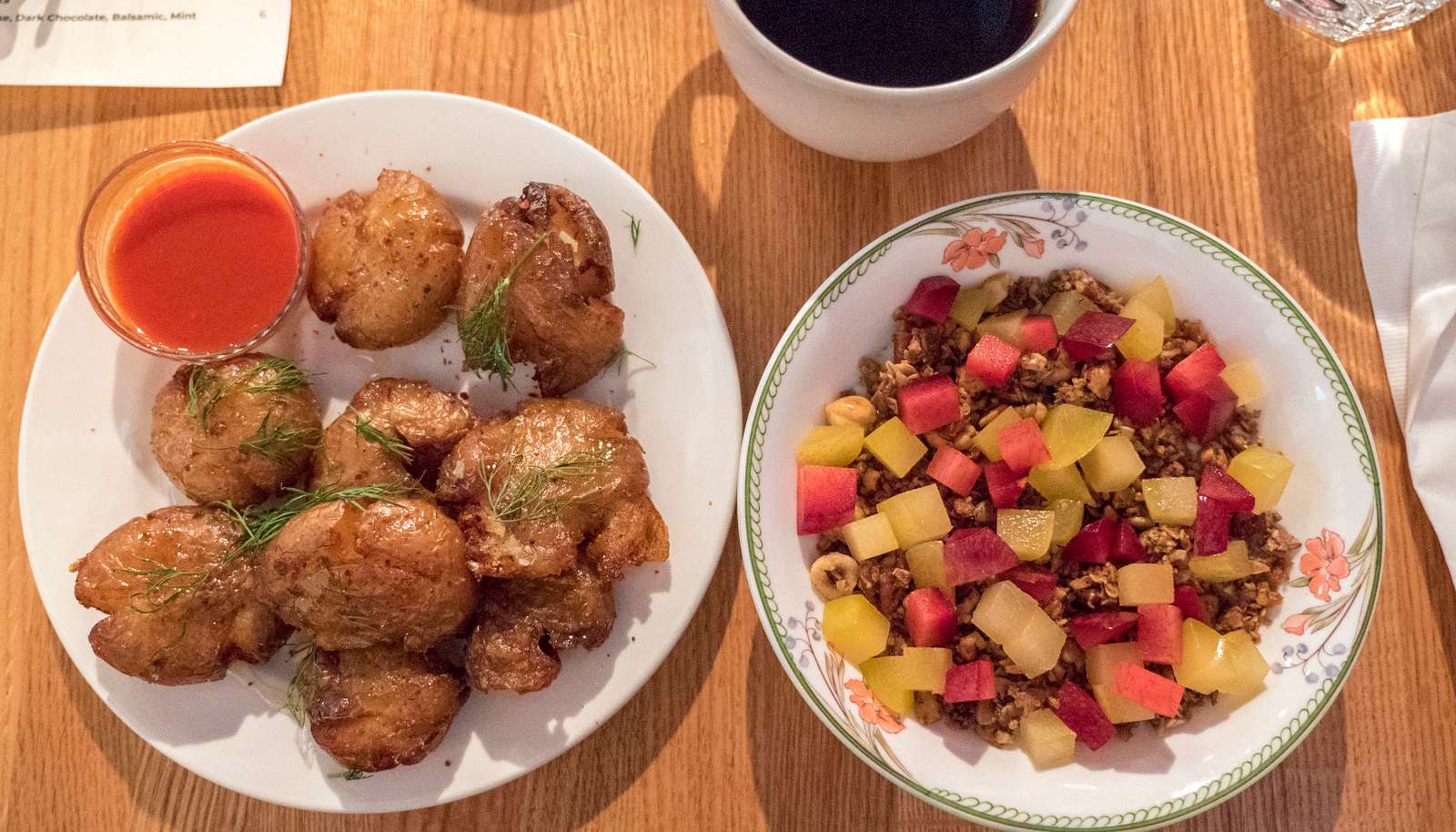 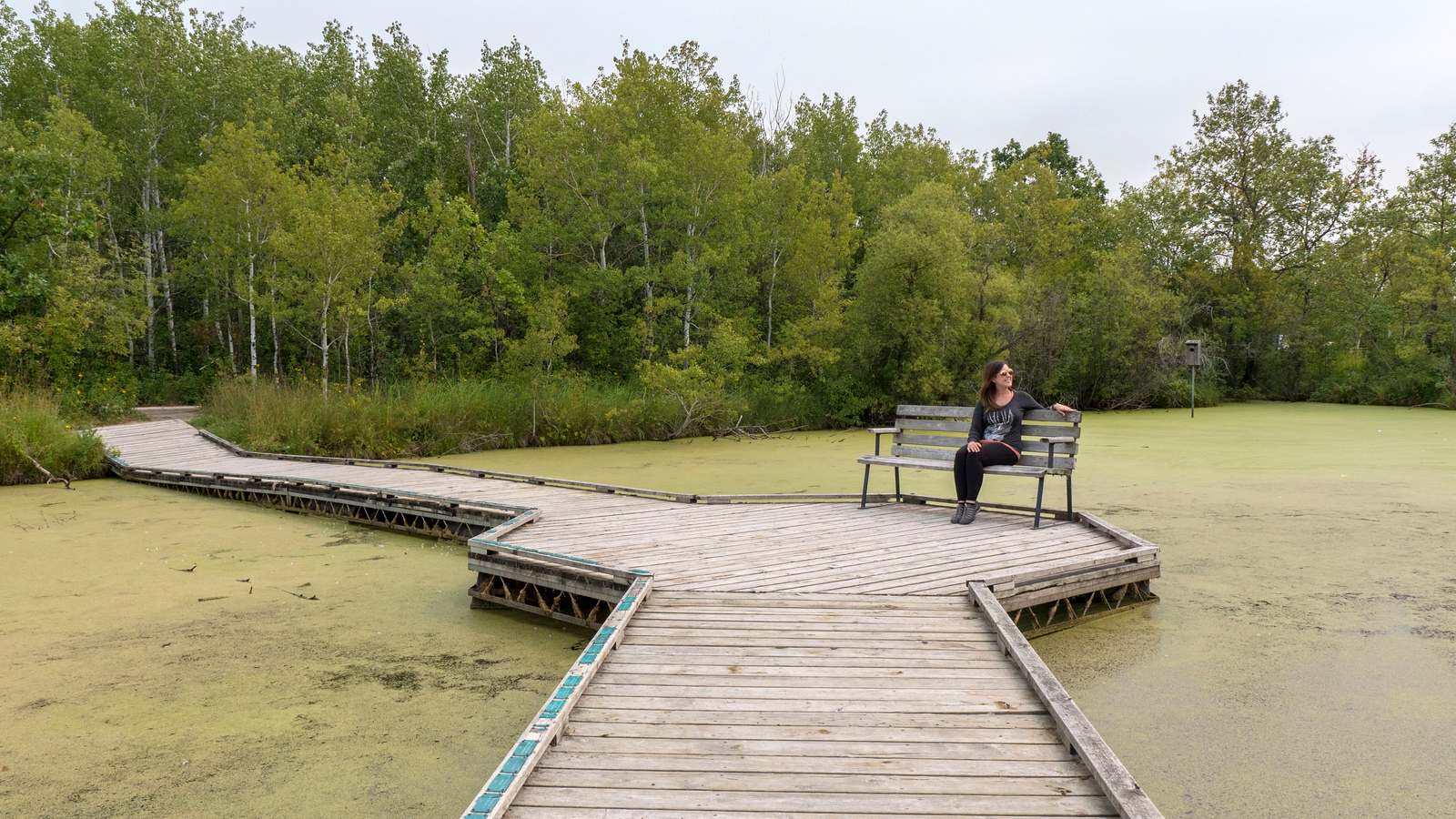 After we explored the natural surroundings of FortWhyte Alive and went on a bison safari, I felt a little bit hungry. We didn’t plan on eating anything until dinner, but I knew that I wasn’t going to last without getting hangry. Thankfully, the Buffalo Stone Cafe inside the gift shop and main gathering centre at FortWhyte Alive was open. There were a couple of vegan options on the menu like fries, but I had my eyes on the hummus bowl. You get two kinds of hummus (carrot hummus and beet hummus), toasted pita bread, and an assortment of raw veggies. It was a healthy snack that kept me going right through to dinner time where we indulged at Boon Burger, one of the finest vegan restaurants in Winnipeg. 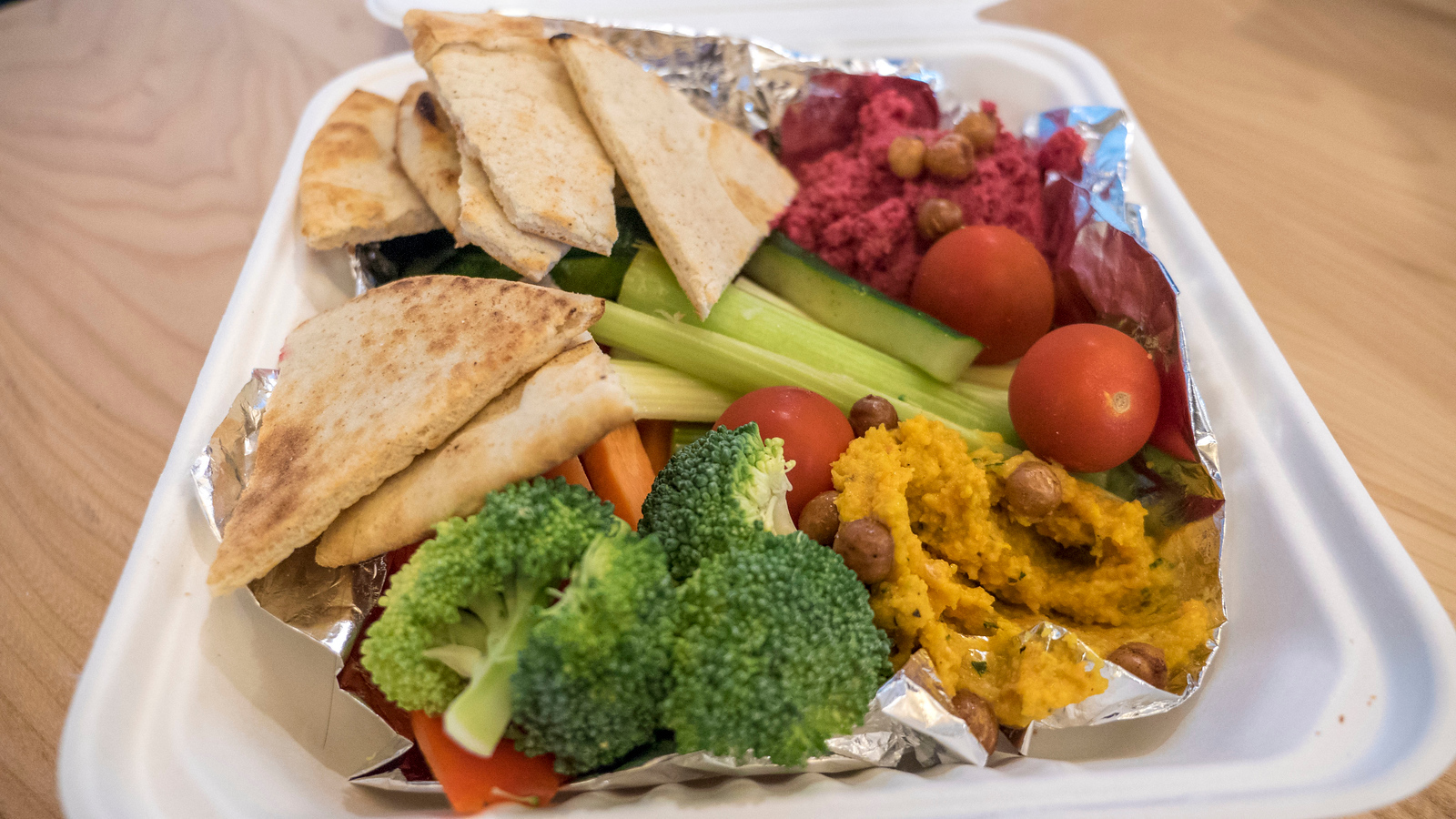 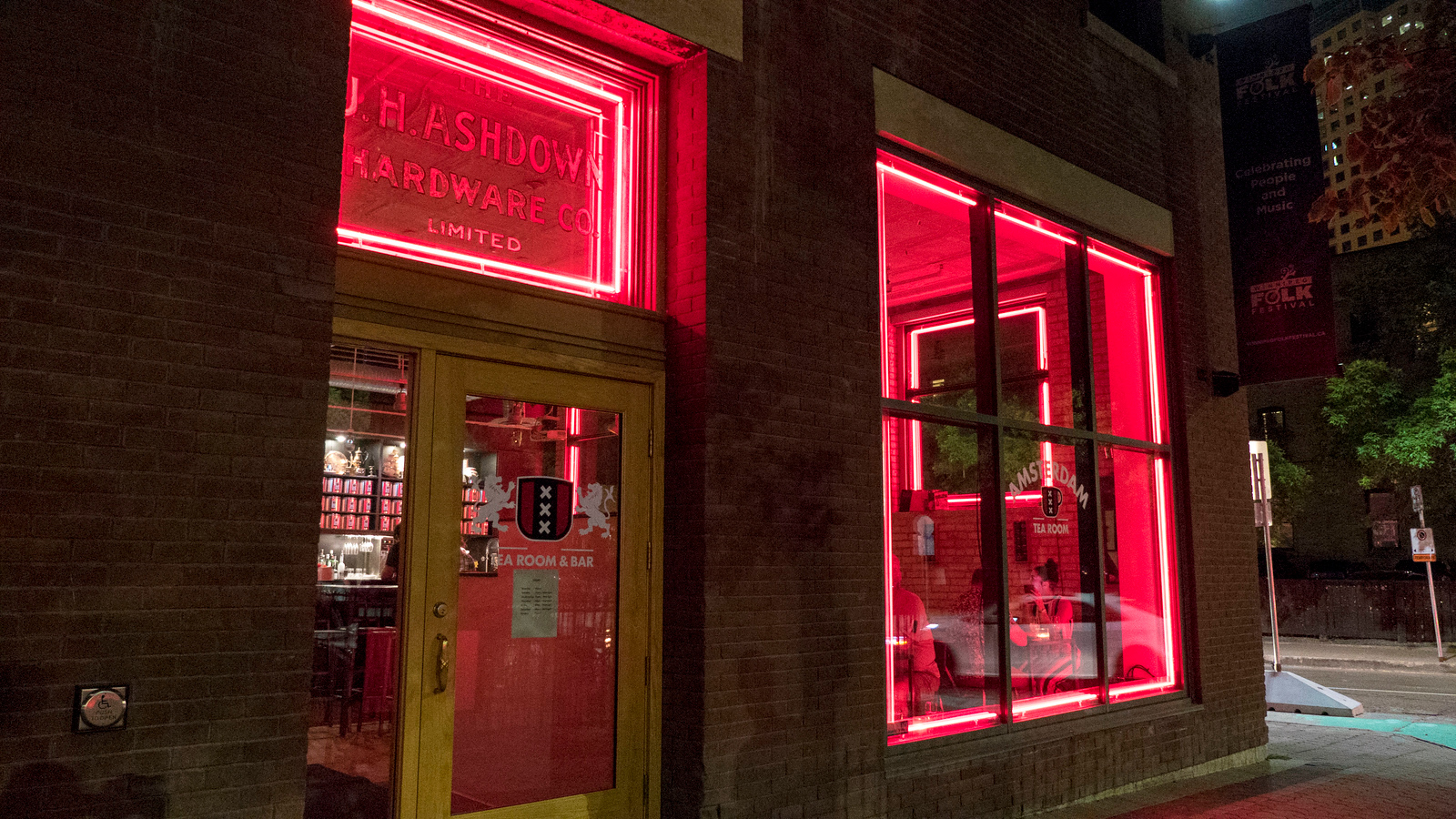 Justin and I decided to go for a drink and some snacks before turning in for the evening. We wandered over to Amsterdam Tea Room and Bar, which was a short distance from our hotel. Immediately, we were drawn by the hypnotic red lights in the window and enthralled with the concept of tea inspired cocktails. The establishment serves up a full tea menu, as well as cocktails and even food made with tea.

I ordered the Jasmine Fizz, a wine cocktail infused with Jasmine tea and Justin got a locally brewed beer. We split an appetizer consisting of bread and a dipper made out of olive oil and tea infused vinegar. Justin ordered some olives, which he devoured all to himself because I detest olives. While Amsterdam Tea House is not one of the vegan restaurants in Winnipeg, it has a few plant-based options to nibble on while enjoying a drink.

There are plenty of other vegan restaurants in Winnipeg, as well as several vegetarian and vegan-friendly ones, too. While I wish we had enough time to try them all, perhaps we’ll return one day in the future to sample even more food! Here are a few you should check out, and please let me know how you enjoy them:

If you’re looking for vegan events in the area, check out the Winnipeg Vegetarian Association website for dinners and vegan meetups.

We had two restful nights at the Mere Boutique Hotel on the waterfront. This stylish and sleek hotel has many complimentary amenities in the room, including juices and Clif energy bars. It’s a modern hotel with everything you need for a comfortable stay, including USB ports by the bed and ample outlets for working. The Nespresso coffee machine in the room brews the perfect cup, anytime of day. Click here to check out more reviews of the Mere Boutique Hotel by fellow travellers. 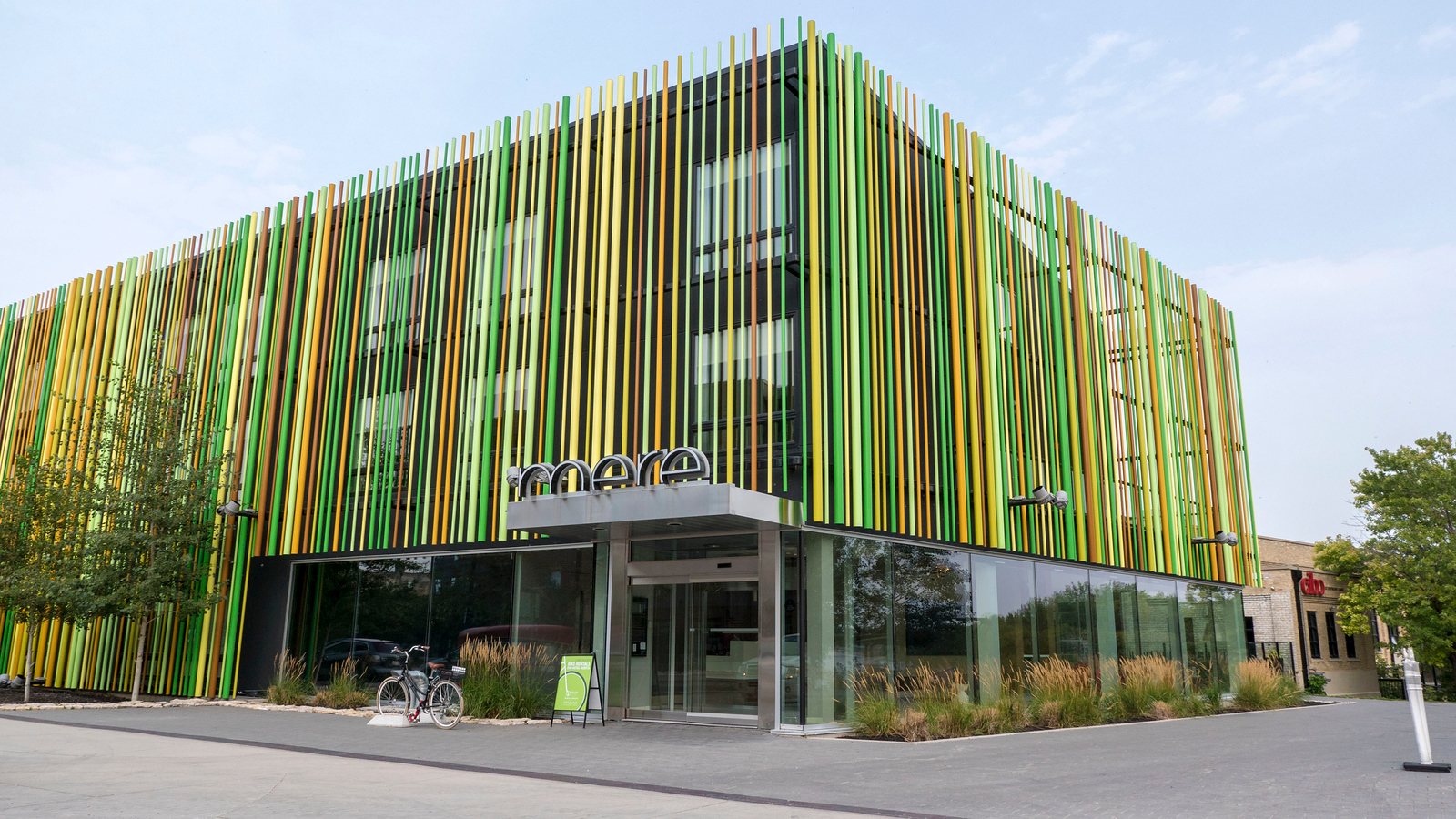 All in all, we has a wonderful time in Winnipeg and it was lots of fun to discover the vegan restaurants in Winnipeg, as well as the vegan options around the city. We still have quite a few places to check off our list, and quite a bit more exploring to do in the city. I don’t think it will be too long until we hop on a plane and return for more!

Thank you so much to Tourism Winnipeg and Travel Manitoba for hosting our stay.


Have you ever dined at any of these vegan restaurants in Winnipeg?

Pretty good list! Next time you’re in town, visit Cocoa beans and Aschenti cocoa on corydon avenue for some gluten-free and vegan deserts. Thanks for sharing!