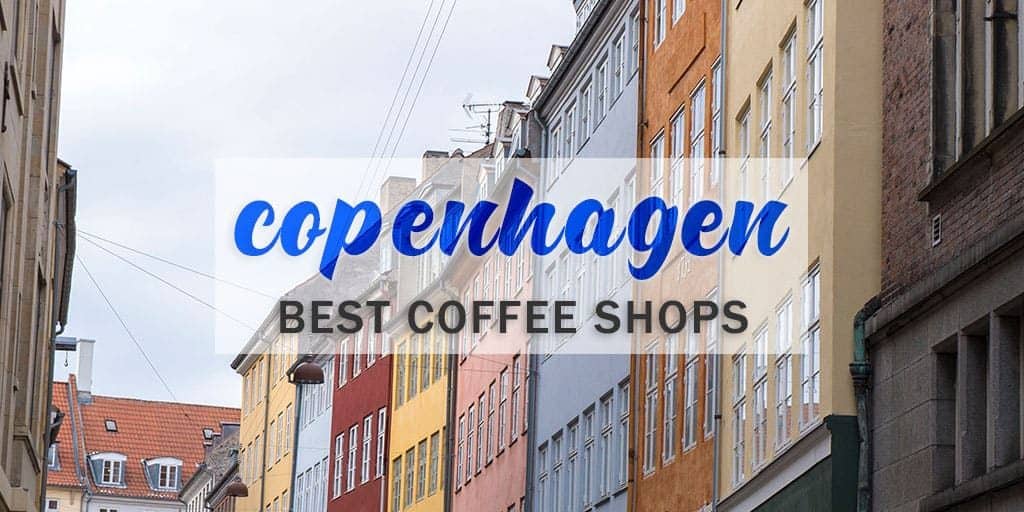 My top picks for best coffee shops in Copenhagen.

As I sit down to write this blog post about Copenhagen coffee shops, a homemade mug of rich, black coffee isn’t too far from my grasp. I generally always drink coffee while I’m writing and working. Naturally, while traveling, I also love to sample as much coffee as possible, especially if it’s a destination known for its beans or coffee culture. Copenhagen has a vibrant coffee scene with so many independent and specialty coffee shops in the city. I made it my mission to try as many as I could.

It was late March and it was pretty chilly in Copenhagen. While the sun managed to make an appearance more than once, the wind was biting and rather fierce down those narrow, colorful streets. I could see why Danish people invited the term, hygge, as I longed for those cozy moments wrapped in a blanket by a fireplace, holding a freshly brewed cup of coffee.

As you might have heard, everything in Copenhagen is pretty expensive. In fact, Copenhagen is the second most expensive city in the world to drink coffee. Don’t let that fact deter you; you’ll just need to budget accordingly when you travel to Denmark. I would never suggest that you drink less coffee, of course.

After three days in Copenhagen, I’ve narrowed it down to my top 5 Copenhagen coffee shops using several factors: taste (being #1), ambiance of the cafe, ease of visiting (good hours, near the city center), and the possibility of finding plant-based milks there. In three days, there was absolutely no way that I could try every coffee shop in Copenhagen. I know that there are many that are missing from this list. But, I’ll just have to try them next time and revise the listing to my top 10 or top 15 Copenhagen coffee shops. There was one cafe that I wouldn’t recommend, and I’ll share that at the end of the article. Without further ado, here are the best cafes in Copenhagen.

I quite literally stumbled upon Prolog coffee bar in the trendy Vesterbro district of Copenhagen. I was wandering the streets, peeking into storefront windows and snapping photos of painted murals that covered entire brick walls. Feeling a little bit cold and sleepy, it was time for a dose of caffeine as a pick-me-up. Prolog happened to be right off the main street I was wandering down, and I was drawn to its minimalist exterior with bright blue trim. 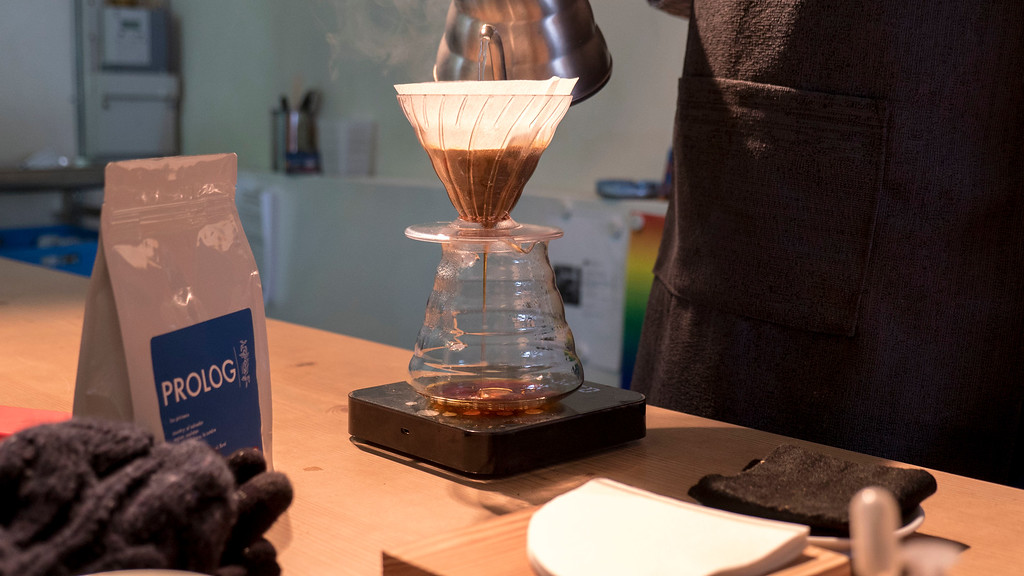 Prolog was one of the first coffee shops in Copenhagen that I tried, and the other ones that followed had a lot to live up to. The shop itself is quite cozy and small. Once inside, I poked my head to the back of the store and around the corner. There was only a small seating area, completely full of fellow coffee lovers. Behind them, there were rows of plants and greenery. Back at the front, I placed my order for a pour over coffee. 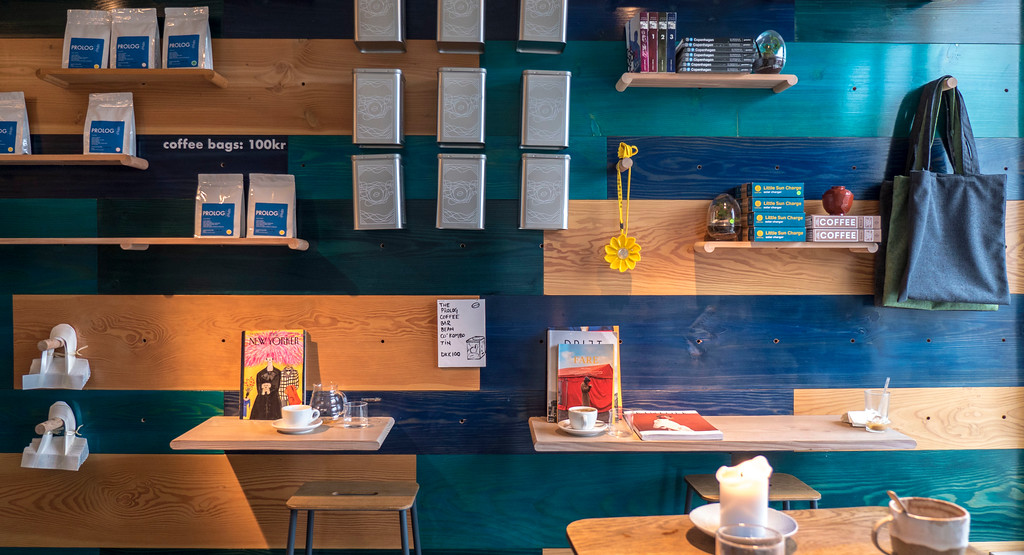 As I waited, one seat came available at a table for one. It was hardly a table, but a shelf fastened to the wall. Even with the limited space available, books and magazines were propped up against the walls and covering the tables, beckoning you to browse them as you sipped your beverage. 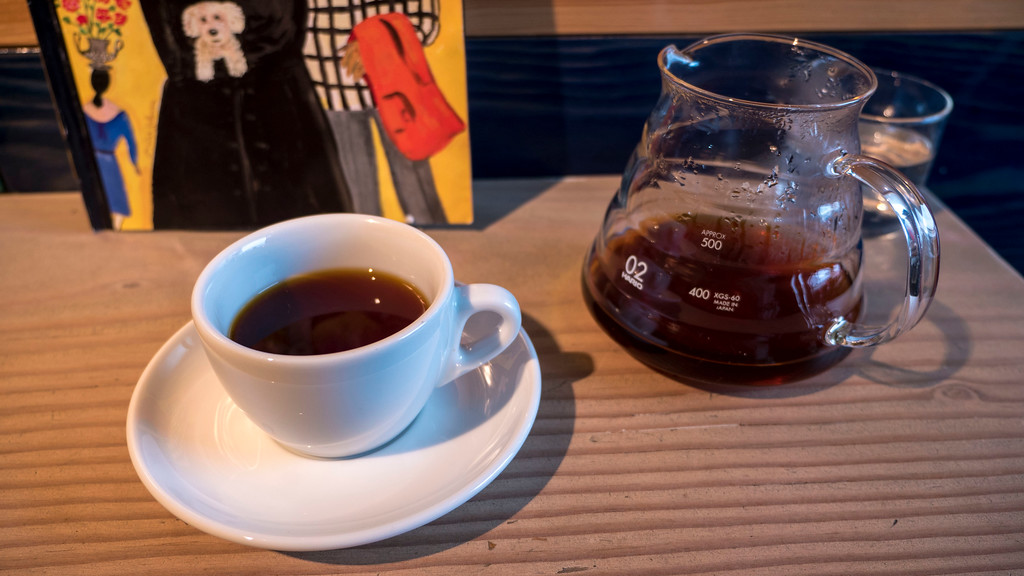 My coffee arrived and looked more like a science experiment than a cup of joe. I poured the coffee from the glass beaker into a small cup. There was no mention of milk or sugar, as though it would be insulting to add anything to this brilliant brew. I sipped my coffee. It was one of the best cups of coffee I’d ever had. Rich and flavorful, this coffee had character. Copenhagen coffee had lived up to my expectations and exceeded them. 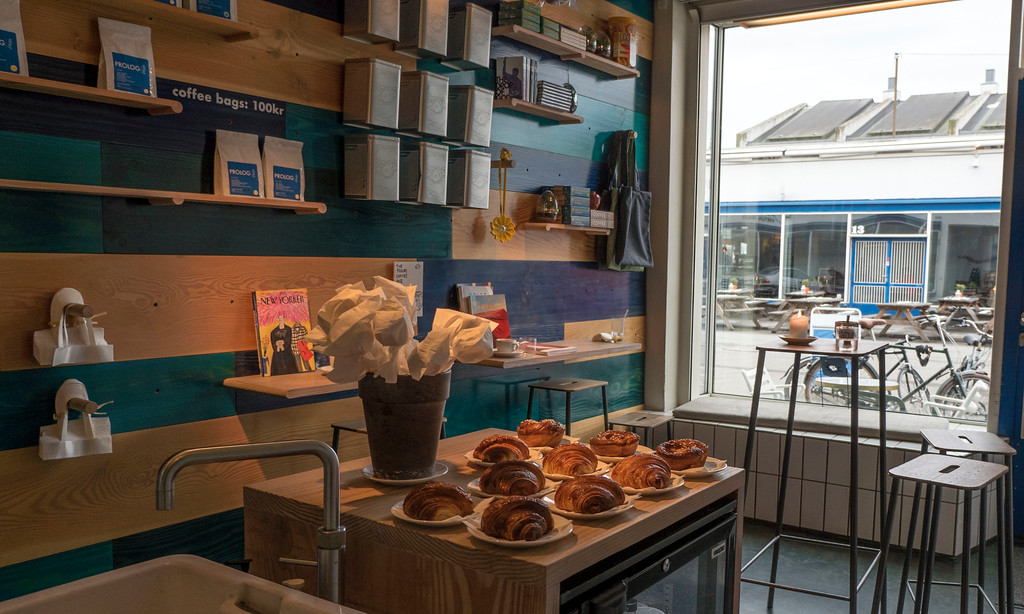 Even though there isn’t much room in Prolog, it’s worth waiting for a seat. In the warmer months, there is a small patio outside the front of the shop that likely doubles its capacity. In addition, there’s usually a tray of freshly baked croissants available, though I didn’t sample them for myself because they weren’t vegan. Prolog is definitely one of the best coffee shops in Copenhagen and I can’t wait to return someday.

Coffee Collective is one of the most famous coffee brands in Copenhagen. They have four cafes in Copenhagen, and multiple coffee shops brew their beans. Coffee Culture operates under Direct Trade, meaning that they have a personal relationship with their coffee farmers and pay them at least 25% more than fair trade price. This also holds the coffee producers up to a high standard, growing the best quality beans. Coffee Collective roasts their own coffee daily and you can find at least a few varieties at their shops. 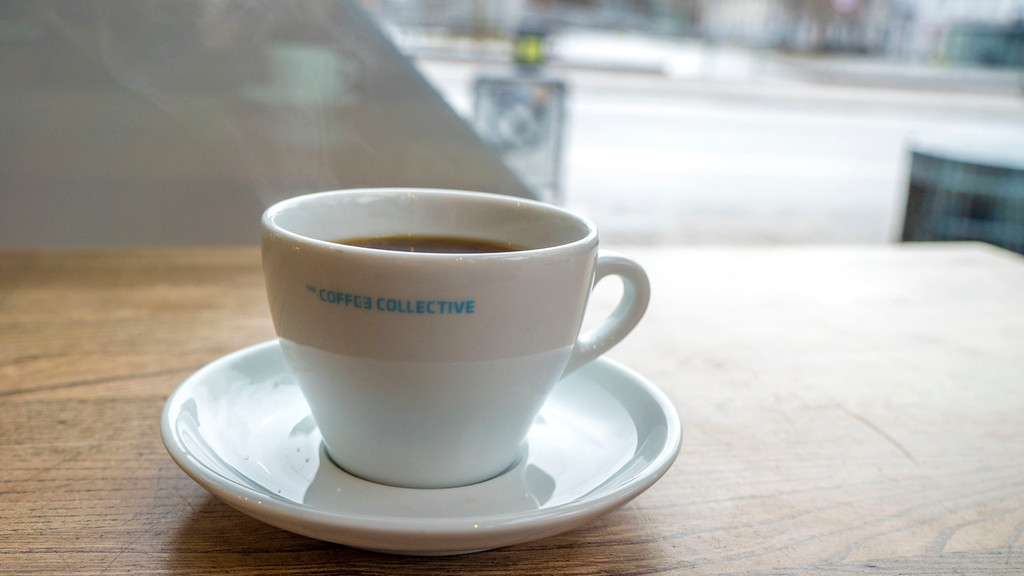 I visited two Coffee Collective cafes during my time in Copenhagen, and the coffee was delicious on both occasions. There’s one in the conveniently located Torvehallerne food market, one on Jægersborggade in Nørrebro, and two others in town that I’ll have to visit next time. While the one at Torvehallerne was geared towards the quick coffee fix crowd, the location on Jægersborggade was spacious, warm and inviting, with many tables in a couple of rooms.

On their official website, you can read more about how they source their coffee, as well as where it’s carried in Copenhagen. Spoiler alert: there are dozens of Copenhagen coffee shops and restaurants that brew their beans. It’s a wonderful thing, as you can be certain that you won’t have to wander too far to get an excellent cup of coffee. 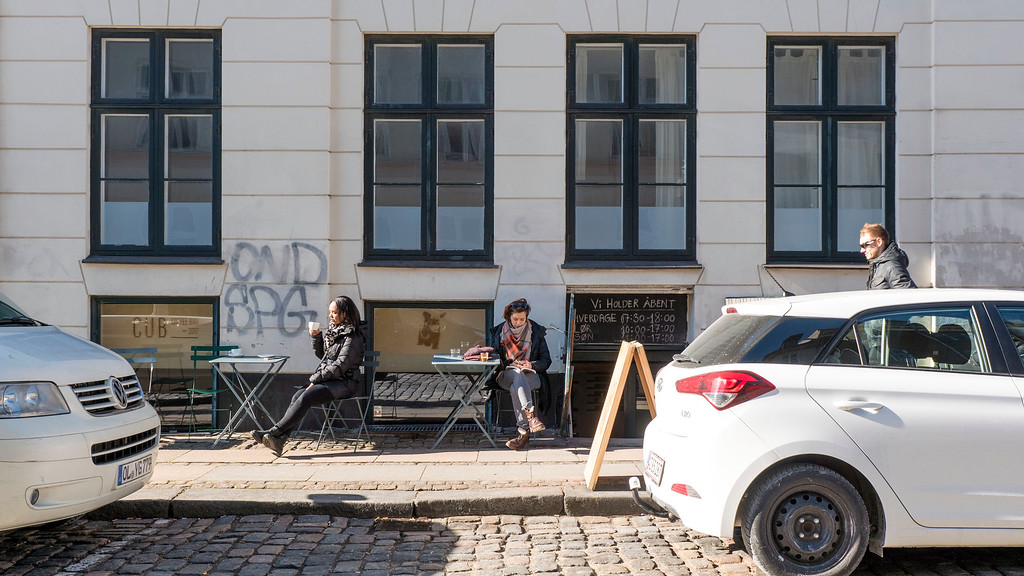 You could easily blink and you’d miss it. Cub Coffee Bar is a bit of a secretive spot, and you would barely know its there if you weren’t looking for it. While there are a couple of patio tables outdoors, you immediately head down a flight of stairs into a basement when you arrive at their location on Boldhusgade. However, it’s near the Parliament and several other attractions, placing it in a rather convenient spot, once you know that it exists. 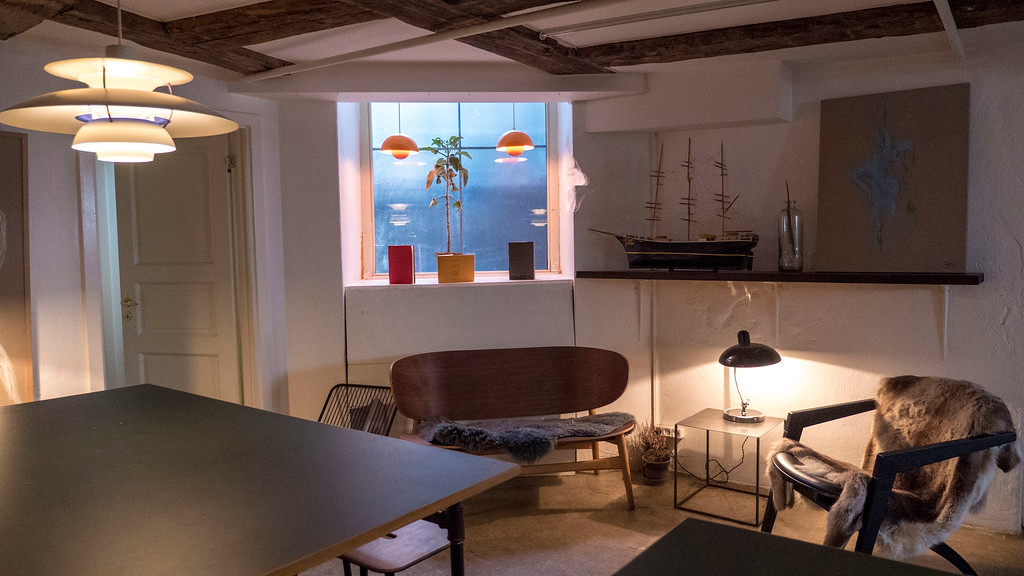 I sampled an oat milk flat white at Cub Coffee Bar, and it was rich and velvety. You won’t taste any bitterness or bad flavor notes, as their coffee is roasted to perfection several times per week. Their talented baristas have the brewing process down to a fine art with the best equipment and water. The coffee bar itself exemplifies the feeling of coziness, even though it’s mostly underground. 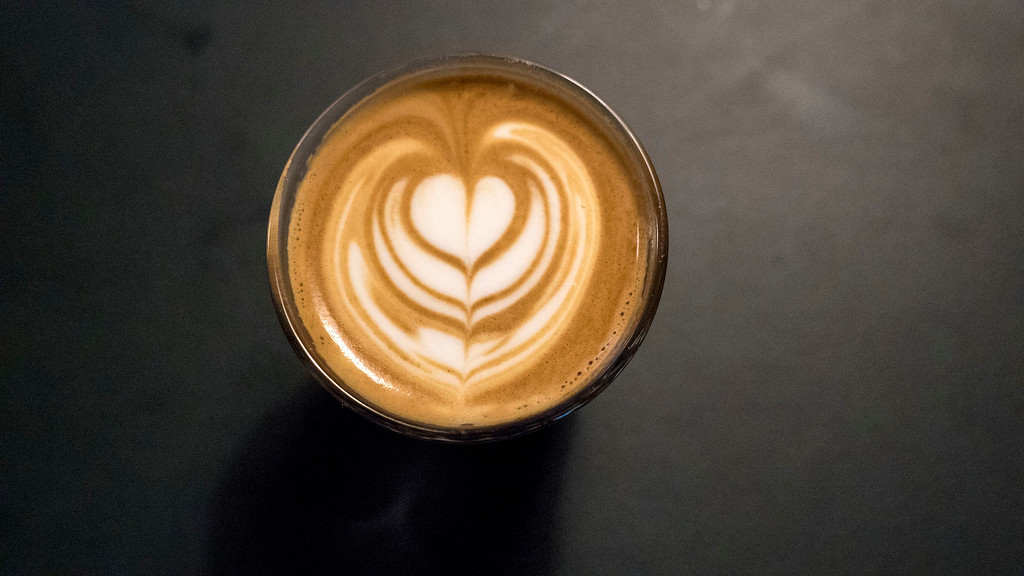 I wouldn’t hesitate to return to Cub Coffee Bar on my next trip to the city as its one of my favorite Copenhagen coffee shops. 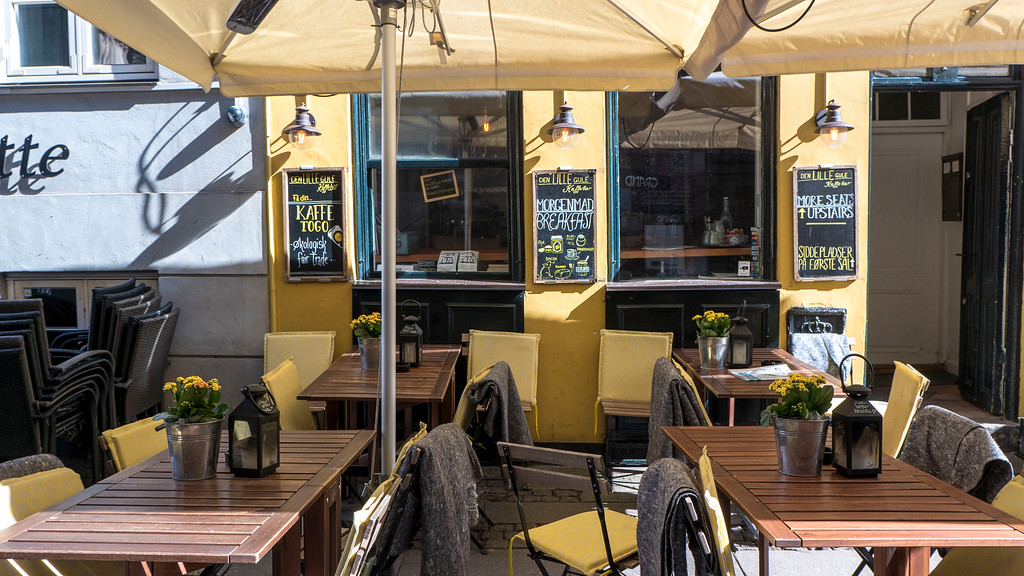 Den Lille Gule Kaffebar translates to The Little Yellow Coffee Bar. It’s true: this coffee shop is right inside a small, yellow building down a picturesque cobblestone road. While the interior looked very cute and cozy, I opted to sit outdoors on the patio in March. But, why would I freeze outside in the winter? Well, I didn’t have to freeze. Every chair had a super warm blanket on it, so you could bundle up even more and sip your coffee in the fresh air. It was a sunny day, so why not? 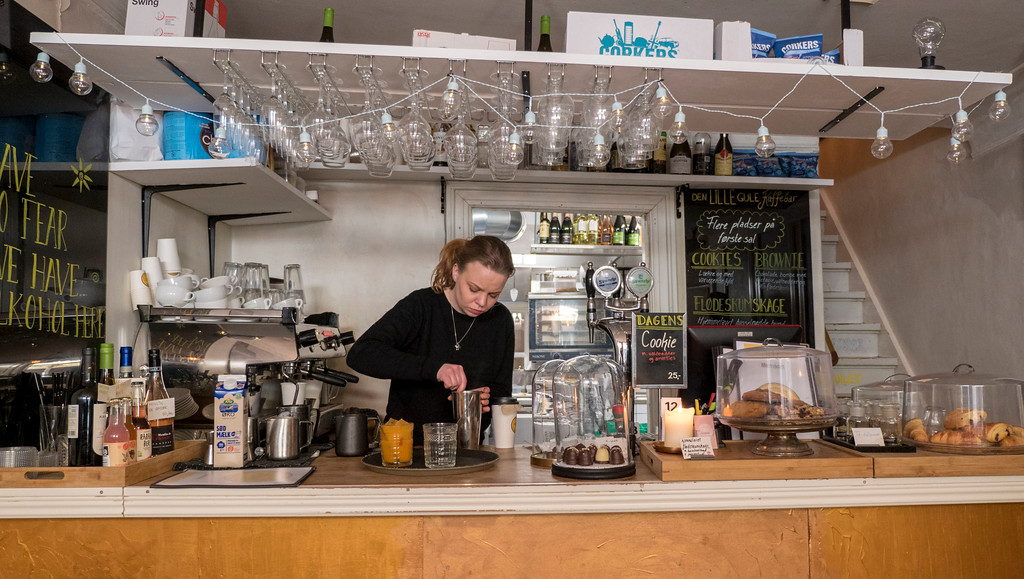 The coffee there was very soothing and delicious. While the coffee tasted great, this coffee shop is one of the best cafes in Copenhagen because it has a charming little terrace out front. Moreover, it was a quiet place to relax. Even though I was traveling solo, I could picture it as a great place to converse over coffee with your travel partners and friends.

Cafe Norden is much more than a coffee shop in Copenhagen: you can eat breakfast, lunch, and dinner there (although no vegan options, at least for breakfast). It’s a rather large space where you can drink coffee, sip a glass of wine, or savor a whole meal.  It’s right in the main tourist area of town in a romantic and elegant building. The hours are fantastic. Cafe Norden is open early in the morning until late at night, meaning there’s really no reason to miss it.

I stopped at Cafe Norden really early in the morning one day, and there really weren’t any other cafes open. Their coffee was quite good and it gave me that perfect boost of caffeine first thing in the day. As they didn’t have any vegan options on the menu, I munched on a vegan croissant that I purchased at a nearby 7-Eleven. 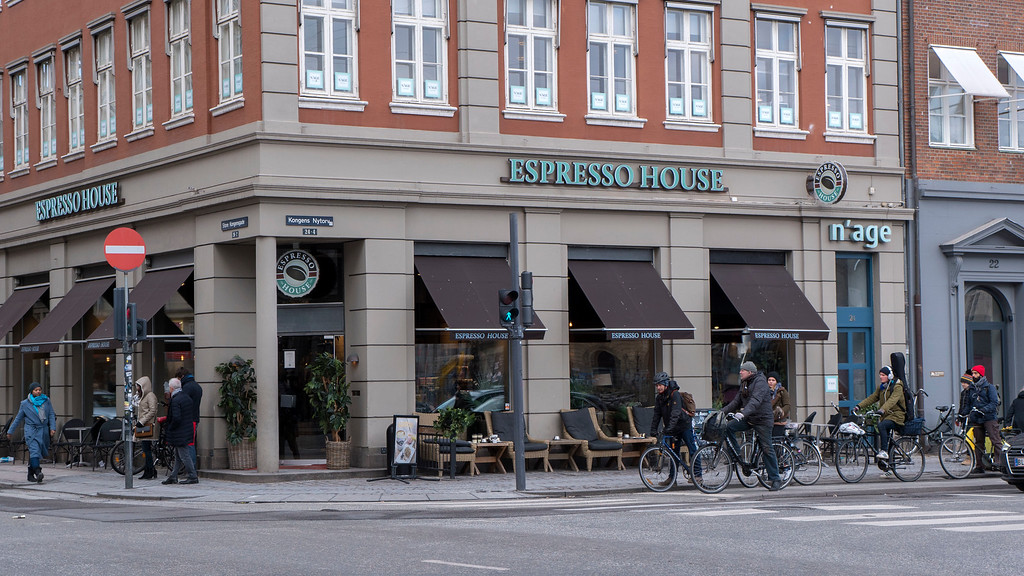 While it wasn’t terrible, there are so many wonderful and unique coffee shops in Copenhagen to visit, so I have one on the list that you should skip. It seems like everywhere you turn your head, you’ll see an Espresso House location. It’s the largest Nordic chain of coffee shops, coming out of Sweden. While they had lots of coffee choices and desserts in their coffee house, I found that a basic cup of coffee there tasted a little bitter and lacked that rich flavor I was seeking. However, if you’re desperate for a cup of coffee and there’s nothing else around, you can get your caffeine fix there. Maybe their lattes are better? Just don’t expect that special cup of coffee that will elevate your spirits. 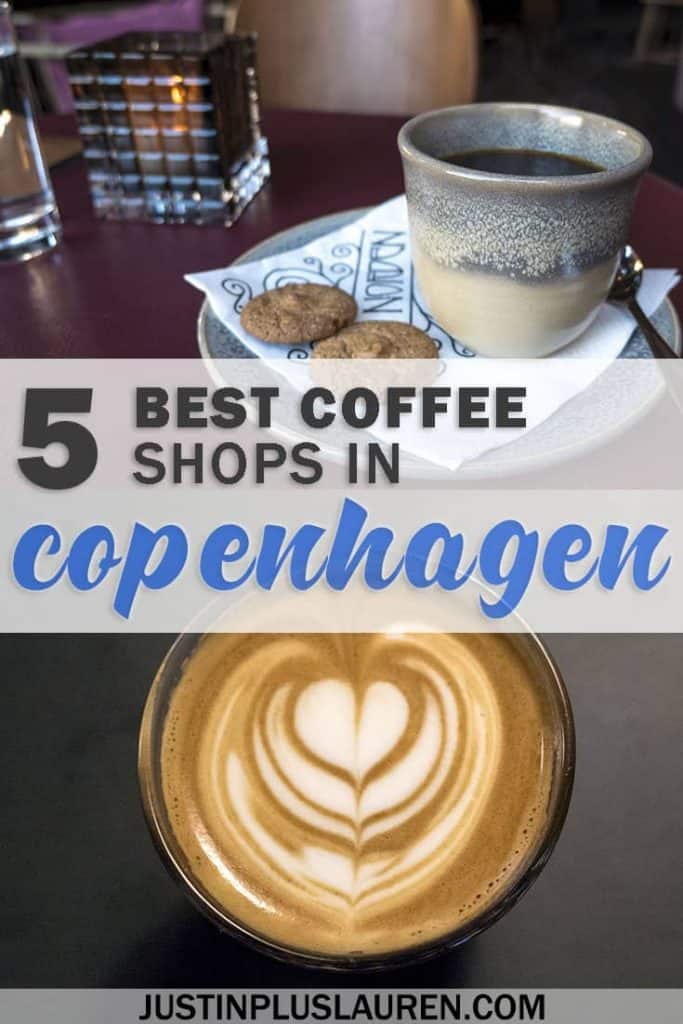 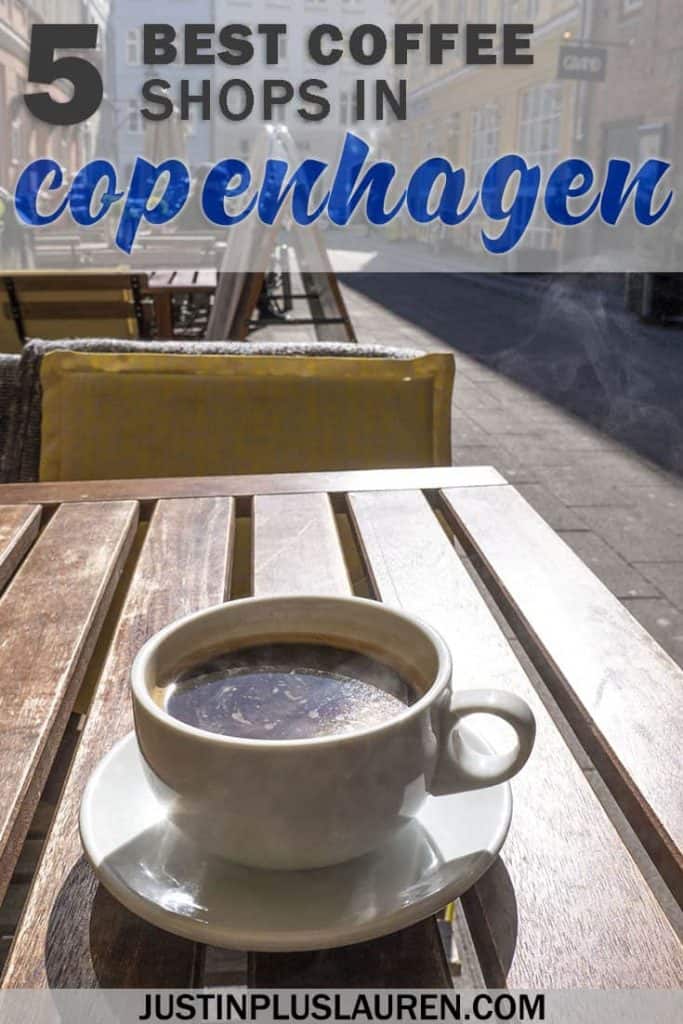 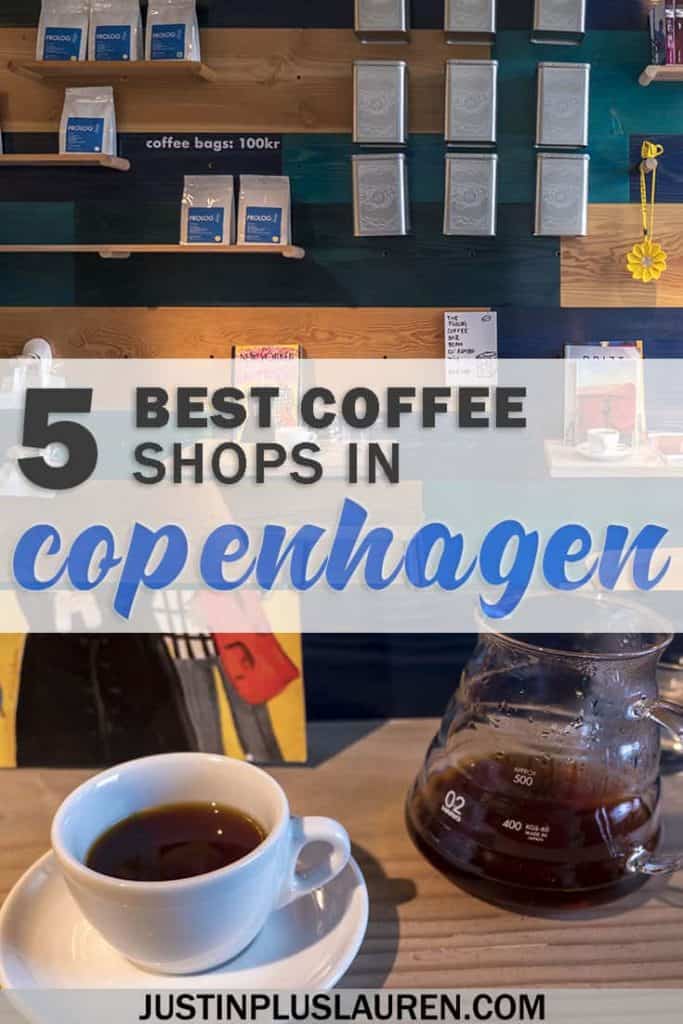 1.1Kshares
Volunteering with Animals in Guatemala: An Amazing Experience for You and the Animals
← Previous
Day Trips From Queenstown: What to See From Queenstown to Wanaka in a Day
Next →
Click here to cancel reply.

There is far more to Copenhagen than downtown. Next time discover more of the city and try the coffee scene where the locals go, such as Andersen & Maillard, Cupenhague or La Banchina. More central choices include the Corner Cafe at restaurant 108.

Kim, thank you for the tips! I know that I only got to try a few places while I was there (there's only so much coffee a gal can drink!) but I'd love to try those spots out. I'll look them up for my return visit! Thanks!