Visiting the Animals at Farm Sanctuary in Watkins Glen NY 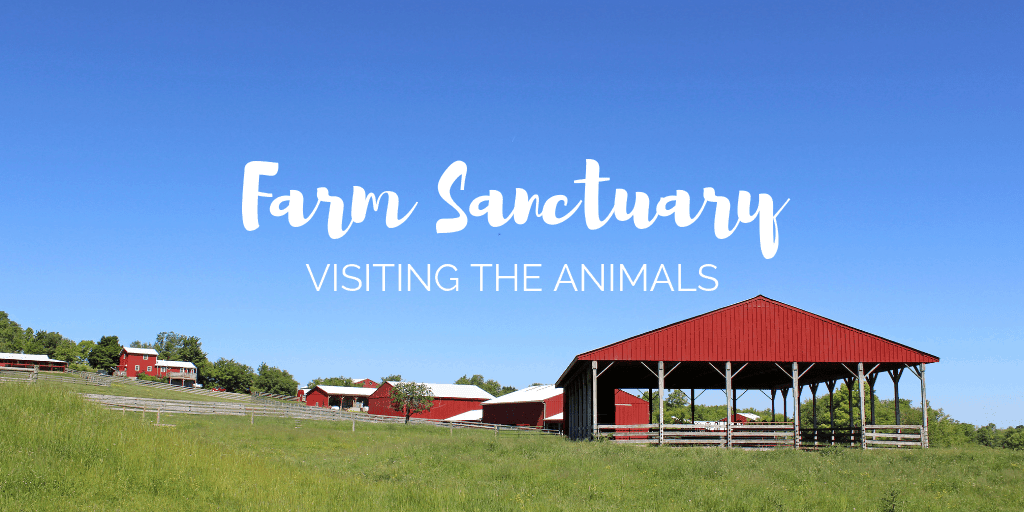 Taking a tour to visit the animals at Farm Sanctuary.

After spending a wonderful evening overnight at the Farm Sanctuary cabins, we were ready to take a morning tour of the farm property to visit all of the animals. Before I take you along on our tour to meet many of the animals there, let me tell you a bit more about this amazing charitable organization.

Farm Sanctuary is a non-profit, charitable organization founded in 1986. Today, Farm Sanctuary is the largest farm animal rescue group and protection organization in the United States. They have three animal sanctuaries: one in Watkins Glen, NY (their first sanctuary), one in Northern California, and one in Los Angeles. These sanctuaries have been home to thousands of rescued animals over the years. From their website, their mission:

Throughout the United States, Canada, and many other countries in the world, industrialized factory farming is a standard practice. Animals are not allowed to roam freely outdoors in pastures as many idealized advertisements portray. Sadly, cows, pigs, sheep, goats, chickens, turkeys, and other animals are confined to small spaces in giant warehouses where they can barely move. Standard factory farming practices are to de-beak, de-toe, and dock tails without anesthesia. These animals are not allowed access to sunlight, wholesome food, or any freedom to exhibit their natural behaviors. Their bodies have been manipulated so they grow larger than they are supposed to at alarming rates, so much that their bones break because they cannot support their own bodies.

These regular abusive practices largely remain invisible to the public. And this is where Farm Sanctuary has stepped up – to help farm animals. Through rescue, education, and advocacy to change the laws, Farm Sanctuary is committed to ending animal cruelty and promoting compassionate, vegan living.

If you find yourself near any of their three animal sanctuaries, you can stop by and take a tour of the farm! Many people (myself included!) do not have any regular interactions with farm animals. It is a great experience for all, young and old, to be able to see rescued farm animals living peacefully! Public tours are offered several days a week. As we stayed overnight on the shelter premises, we were offered a private tour in the morning one hour before the sanctuary became open to the public. Join us as we take you on a tour around Farm Sanctuary in Watkins Glen. 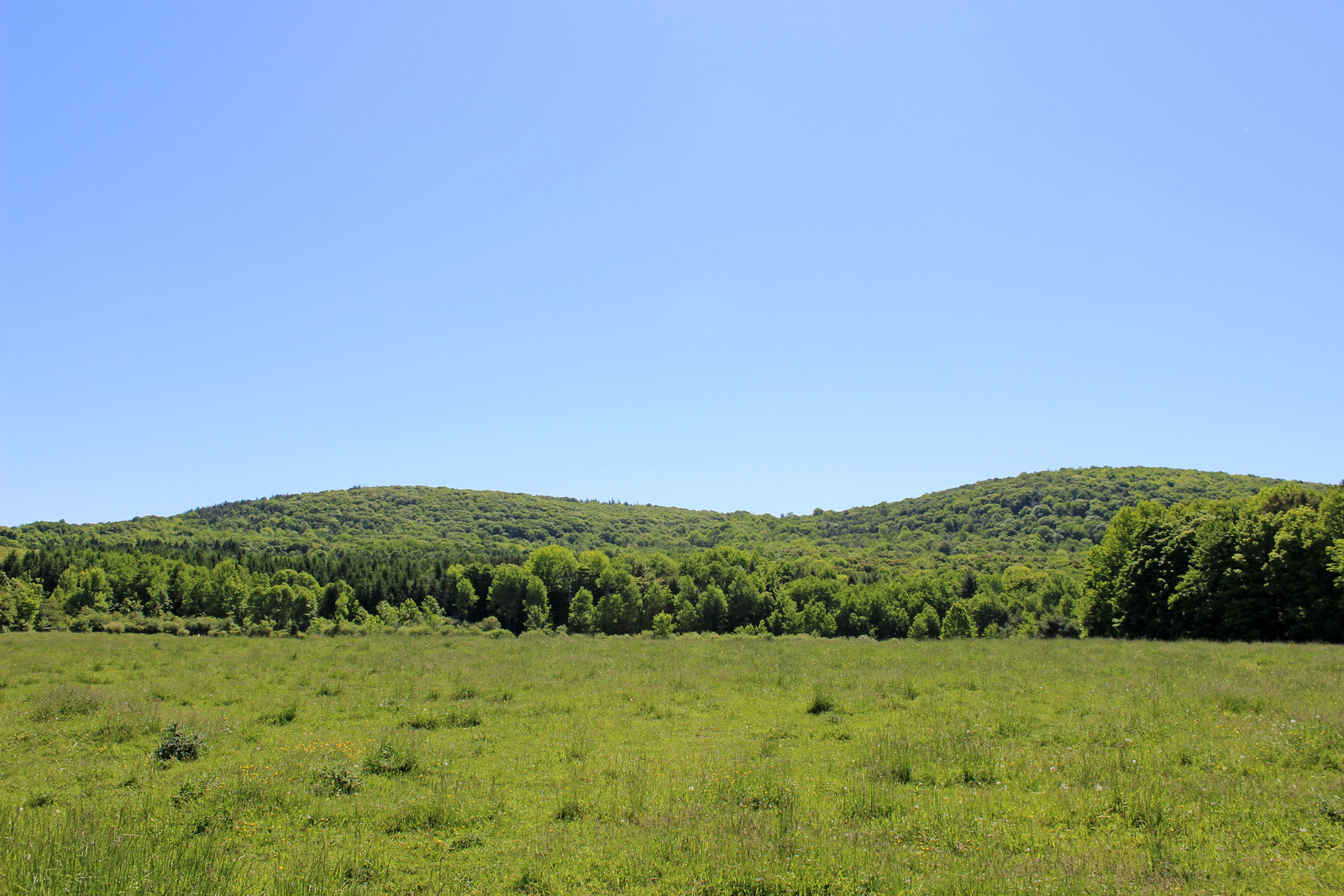 Watkins Glen is a beautiful town in the Finger Lakes region of New York state. The farm is located just outside Watkins Glen among the rolling countryside. Surrounding the farm is a hilly terrain filled with trees. Everything is so green. There were only four of us attending our private tour. There are three cabins on the property for guests to stay overnight, and one of the cabin’s guests had done multiple tours over their stay at the farm. So, it was just Justin, myself, and another young couple on our tour.

Our tour guide was very knowledgeable, answering any questions that we had along the way. She also told us which animals were the friendliest, and which ones may not be as approachable. We were guests at the animals’ homes – and you could easily tell which ones wanted our attention, and which ones felt like keeping to themselves. With that said, most of the animals were quite friendly and welcomed human interaction. It is amazing how these animals can be so forgiving of humans when they came from such abusive situations at the factory farms and stockyards. 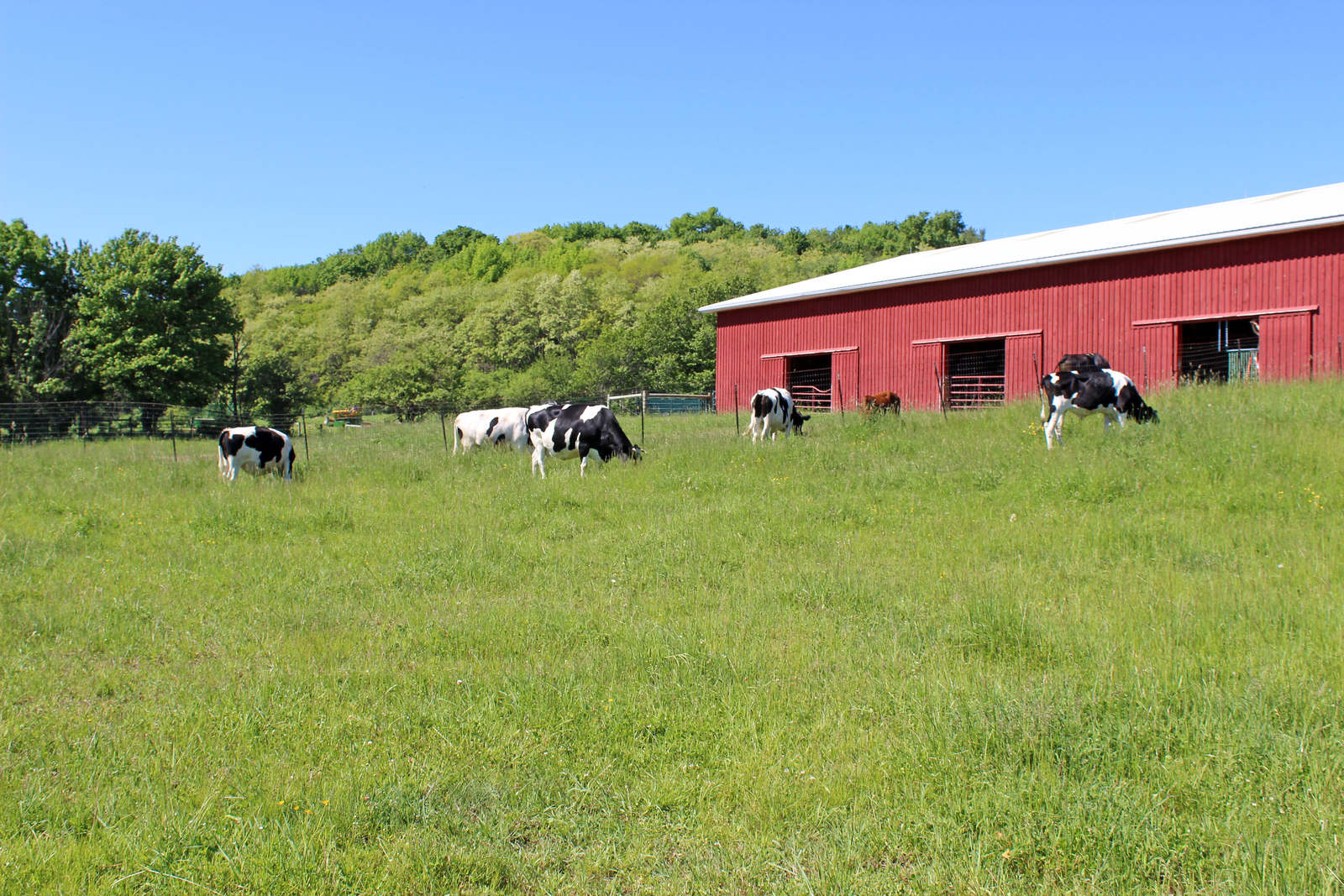 The first place we visited was one of the cow pastures. There were barns to shelter the cows in the evening, and huge pastures for them to roam freely in all day long. Here, they happily munched on grass together. The cows were very friendly and liked to be petted. One of the cows was really friendly and gave me a giant lick up my whole leg! It felt rough like sandpaper and caught me off-guard – I’m pretty sure that I laughed up a storm when that happened! I could have spent all day in these pastures with these gentle giants, but we had many other animals to meet on our tour. 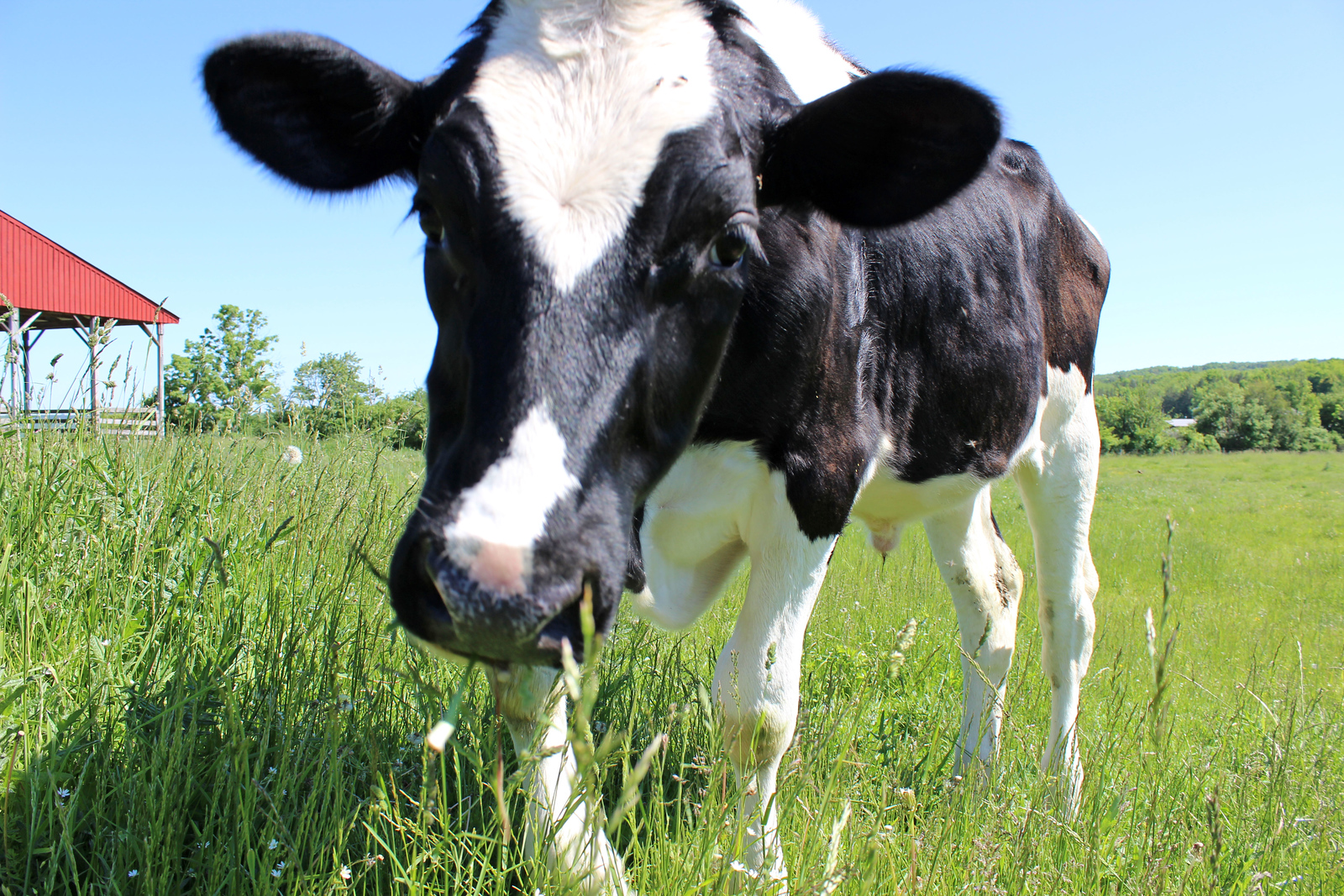 Next up, we visited the barn that housed many sheep and goats. Our tour guide told us that sometimes, the sheep can be easily spooked by people entering their home. She said not to take it personally if the sheep weren’t very friendly. We walked cautiously into the barn and observed the numerous sheep and goats laying around on piles of hay. Within moments, one sheep emerged from the crowd and slowly approached me. I crouched down beside him an gave him some pets on his woolly head. Soon, another emerged and walked towards us. In no time, contrary to our tour guide’s words, we were surrounded by many sheep and goats, all wanting some scratches and attention! One sheep kept sticking his head towards me when I pet another because he wanted more scratches. One of the sheep even put his head in towards my chest and leaned in towards me, as if to give a hug! It just melted my heart. The goats were incredibly friendly as well, wanting just as much attention as the sheep! They were all just too cute. 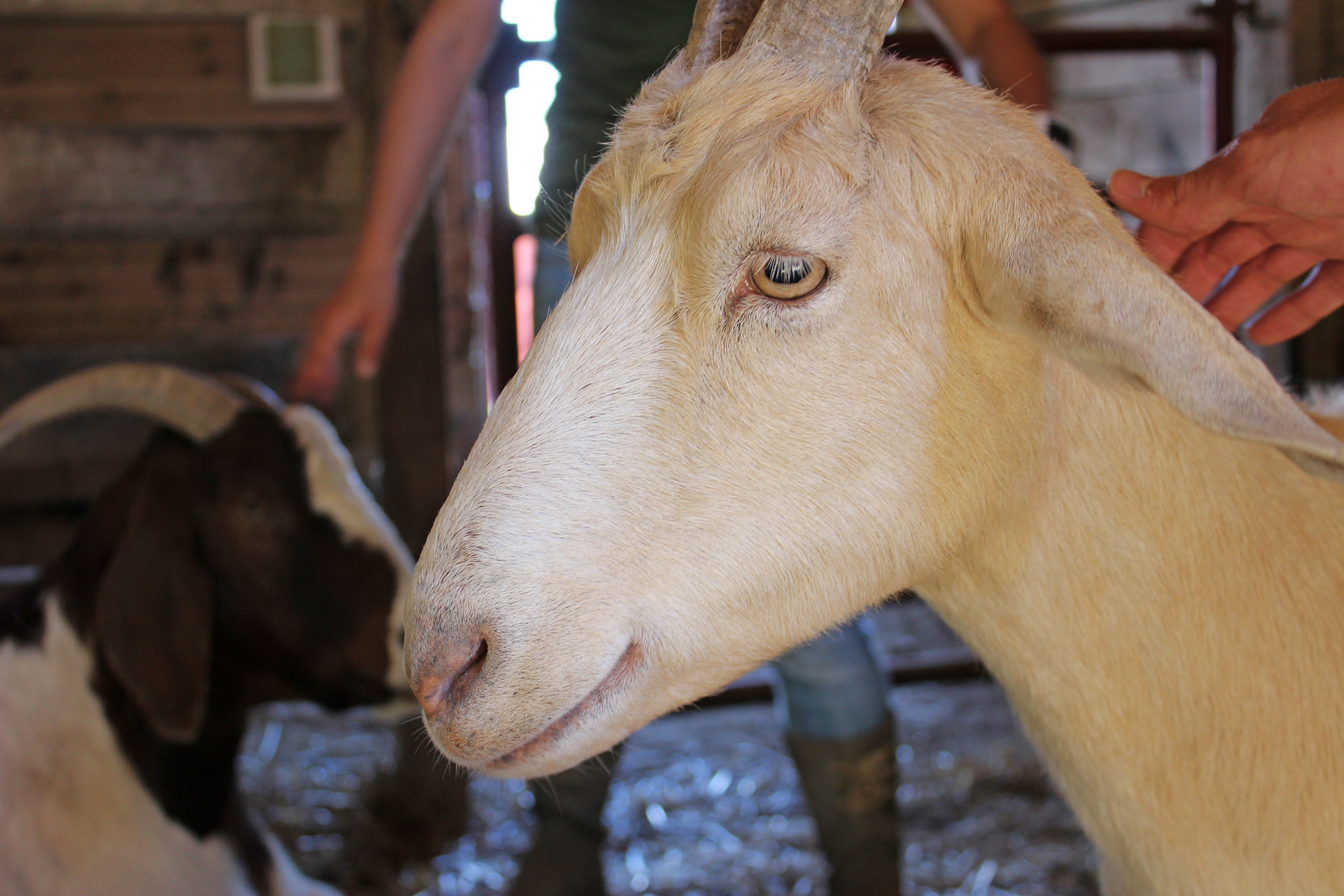 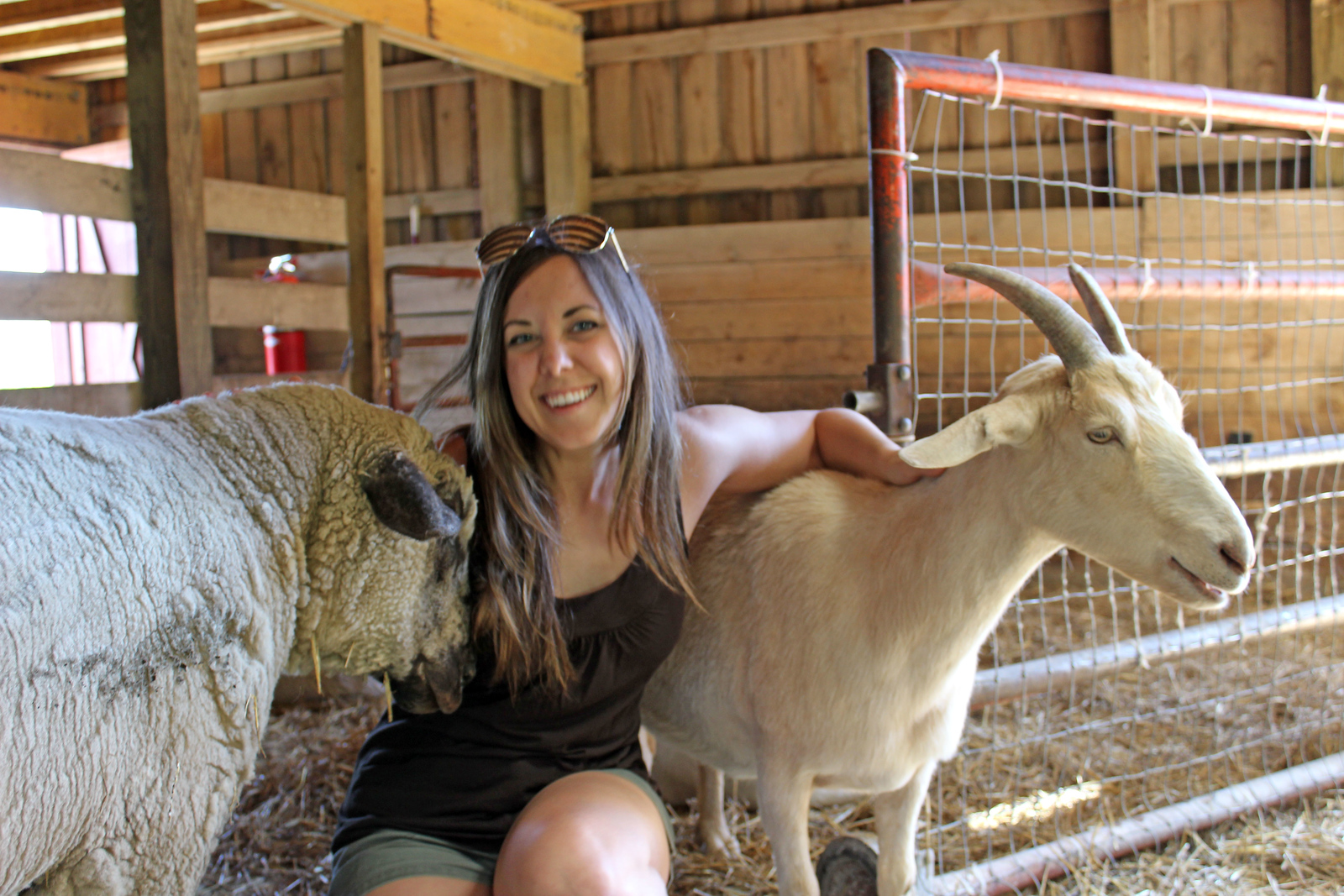 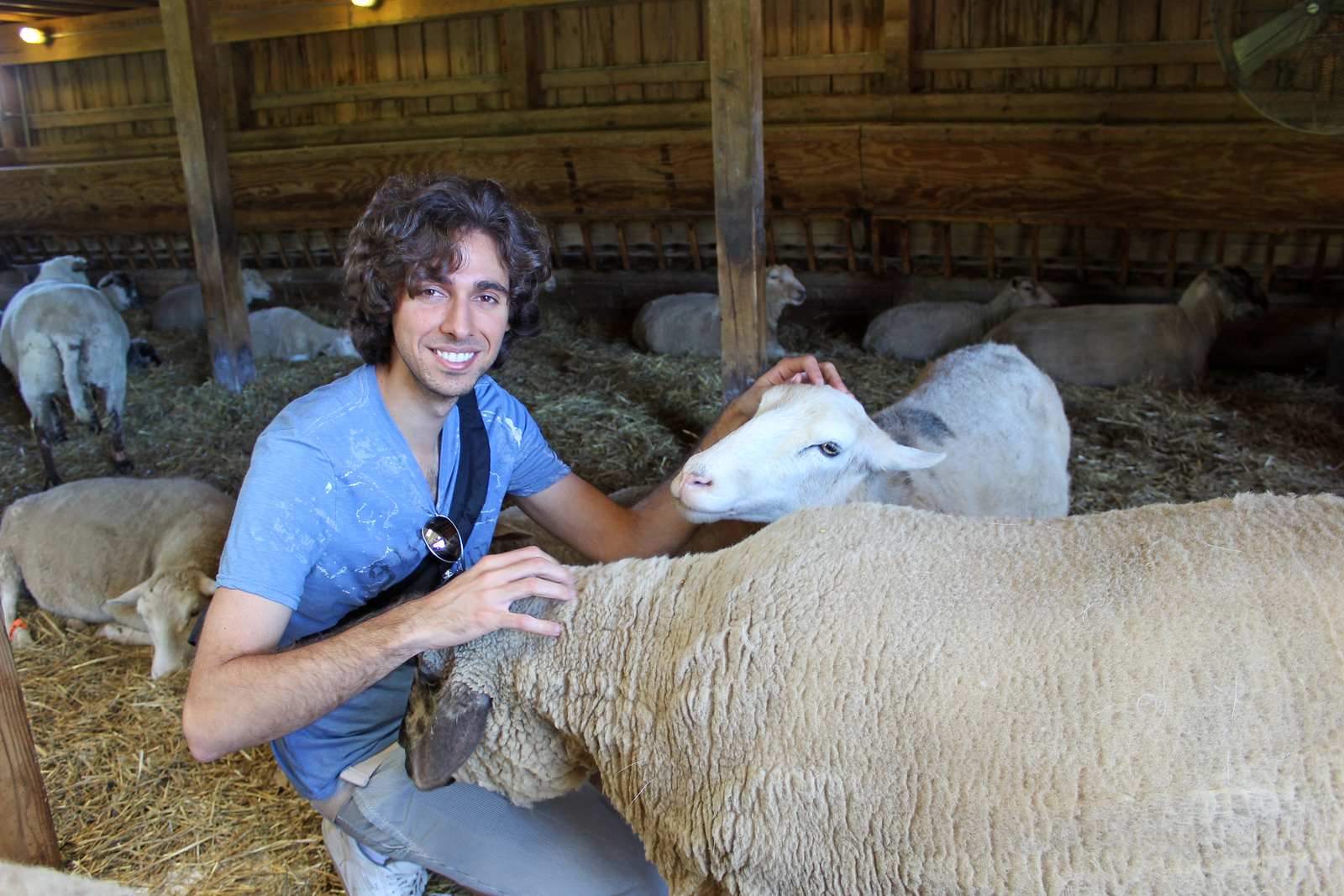 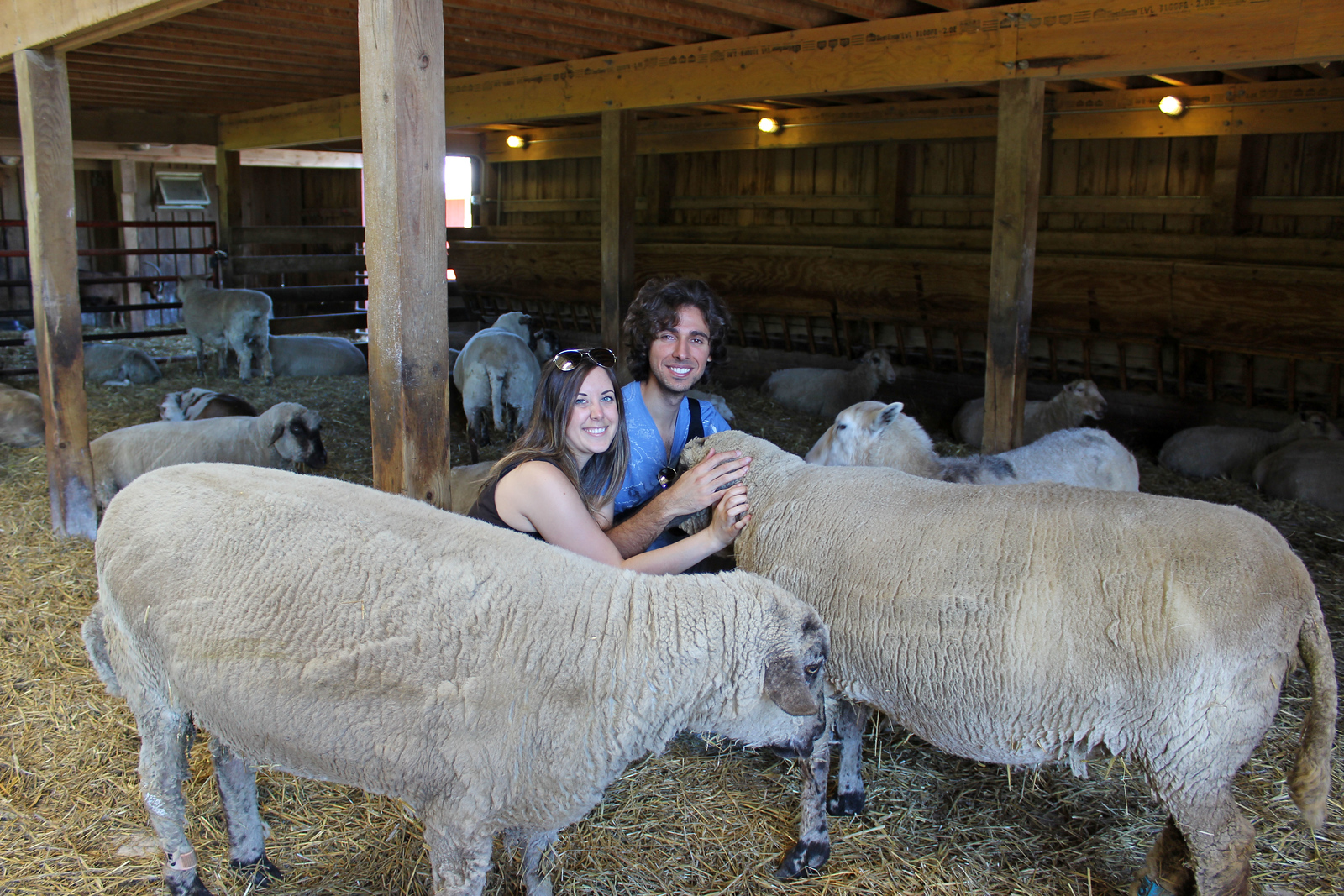 The next barn we visited was home to many turkeys and chickens. It was amazing to watch the turkeys communicate back and forth with their little clucks. They are very chatty creatures! One of the turkeys there has incredible feathers that make him quite the sight to behold. And apparently he knows how good looking he is. One time, they put a full length mirror on the ground in front of him, and he admired himself in the mirror all day long! It was also fun to pick some blades of grass and let the turkeys eat it out of our hands. We were able to pet the turkeys and they liked to be scratched beneath their feathers and all over! The eggs that the chickens produce regularly on the farm are not consumed by people; rather, they are crushed up into the animal’s food and fed back to them as a source of protein. 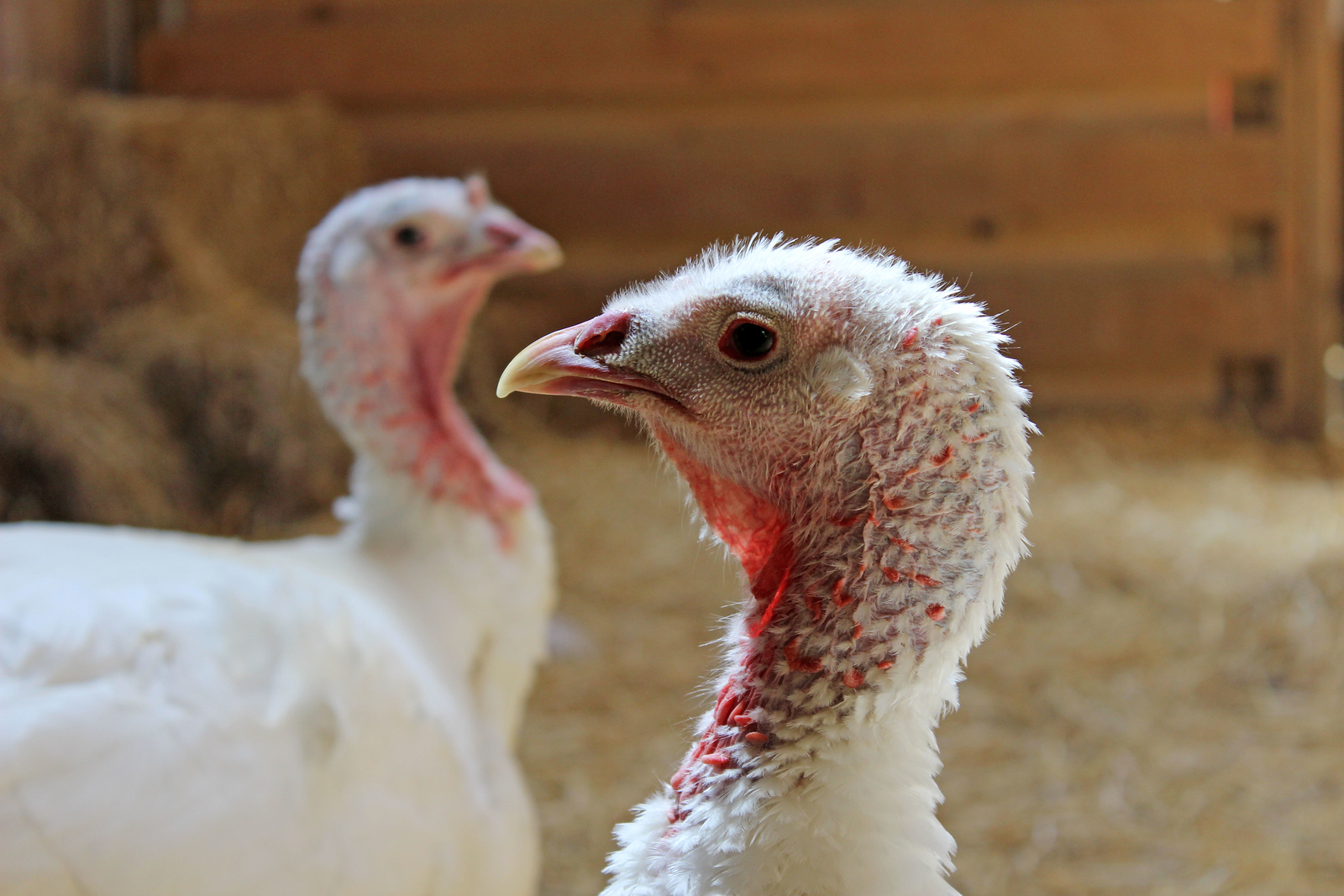 The last main stop of our tour was to meet the pigs in their barn. The pigs are allowed a cool place to nap and lounge around in the barn filled with hay, and they also have a large outdoor area with ponds by which to submerge themselves. Pigs love cooling off in these outdoor ponds, and adore rooting around in the mud. The pigs can come and go freely from the barn as they please. We did see one pig lounging about outdoors, but many were sleeping inside away from the hot sun. While we didn’t want to disturb their slumbers too much, we did give many of the pigs some scratches on the belly which they rather enjoyed. 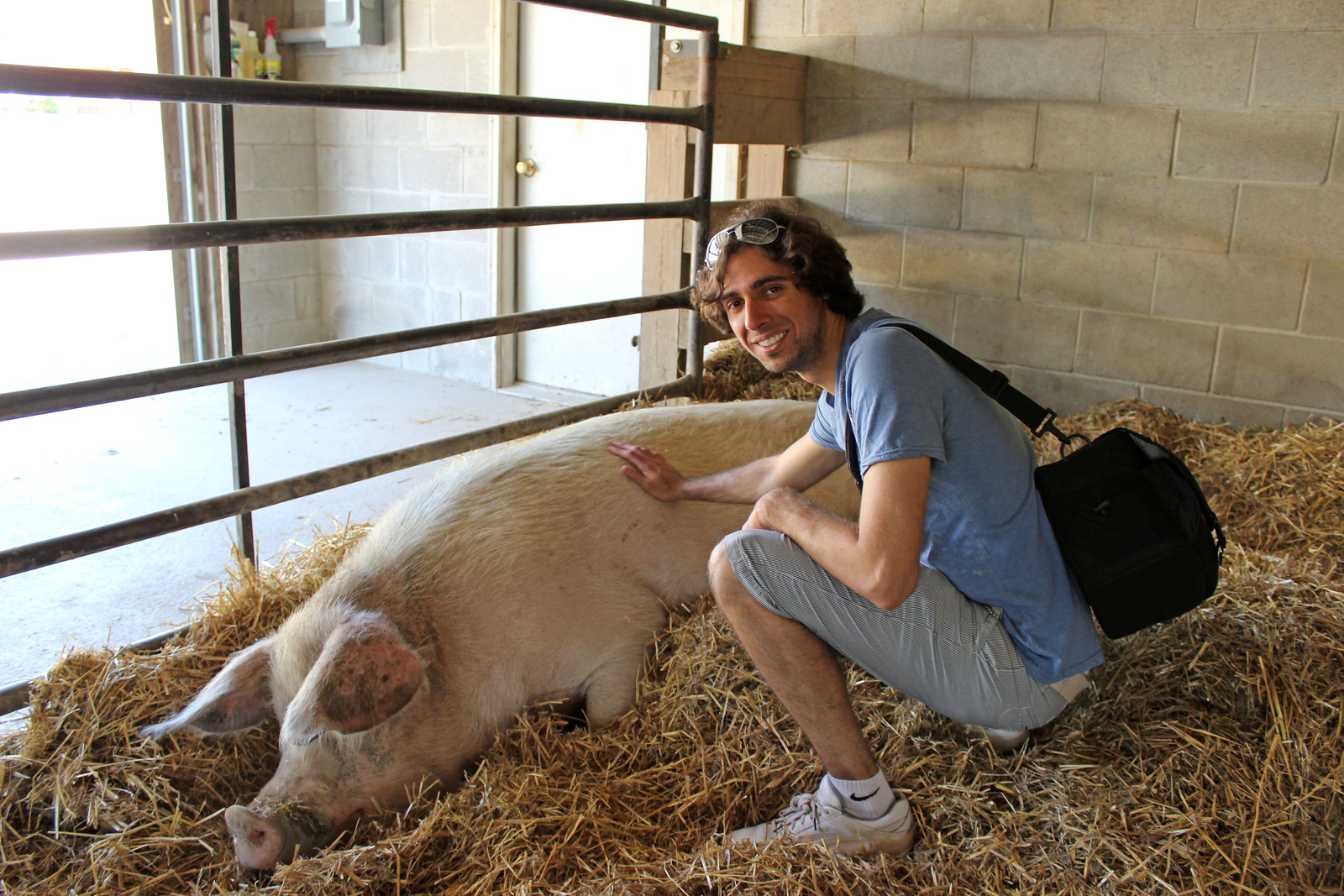 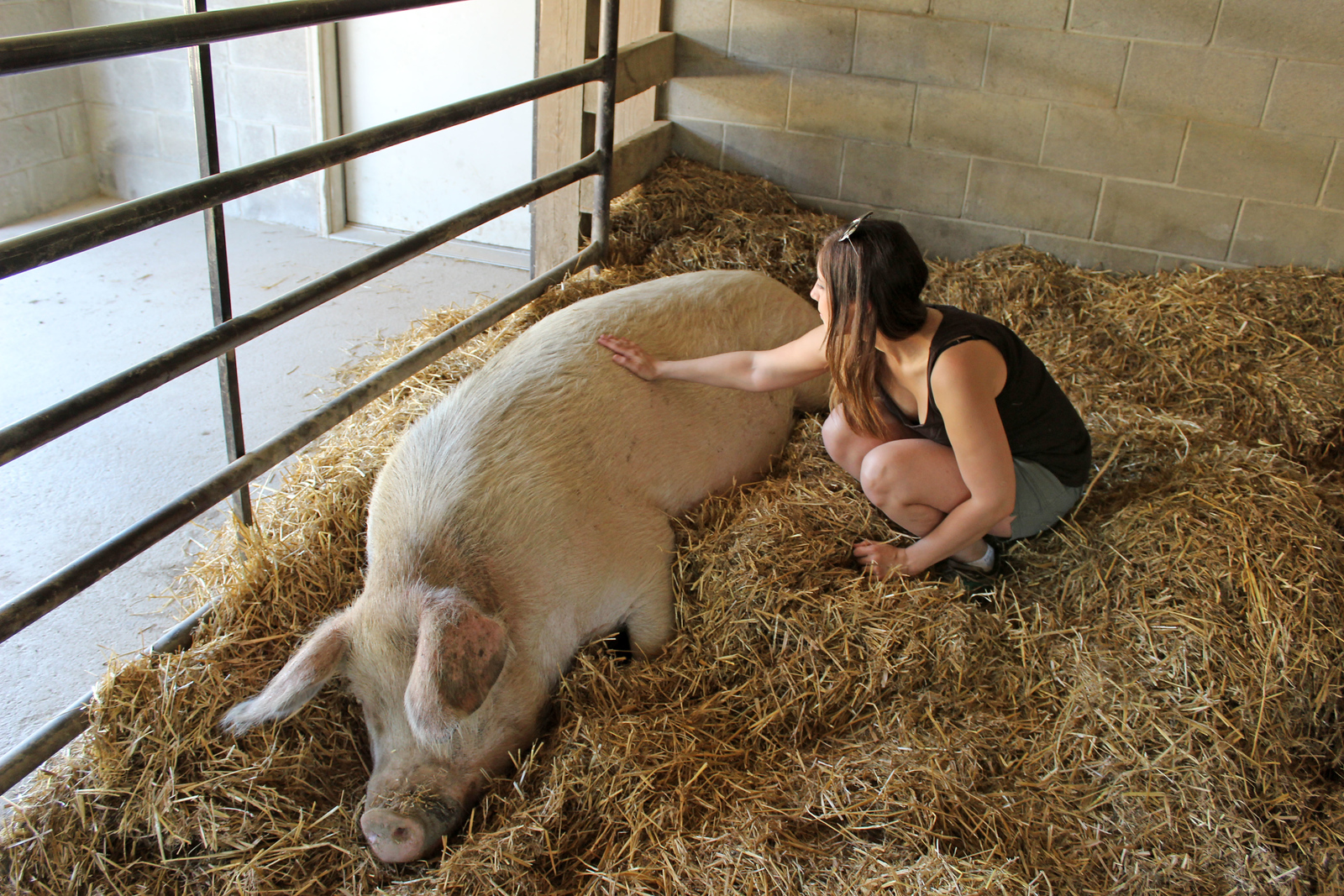 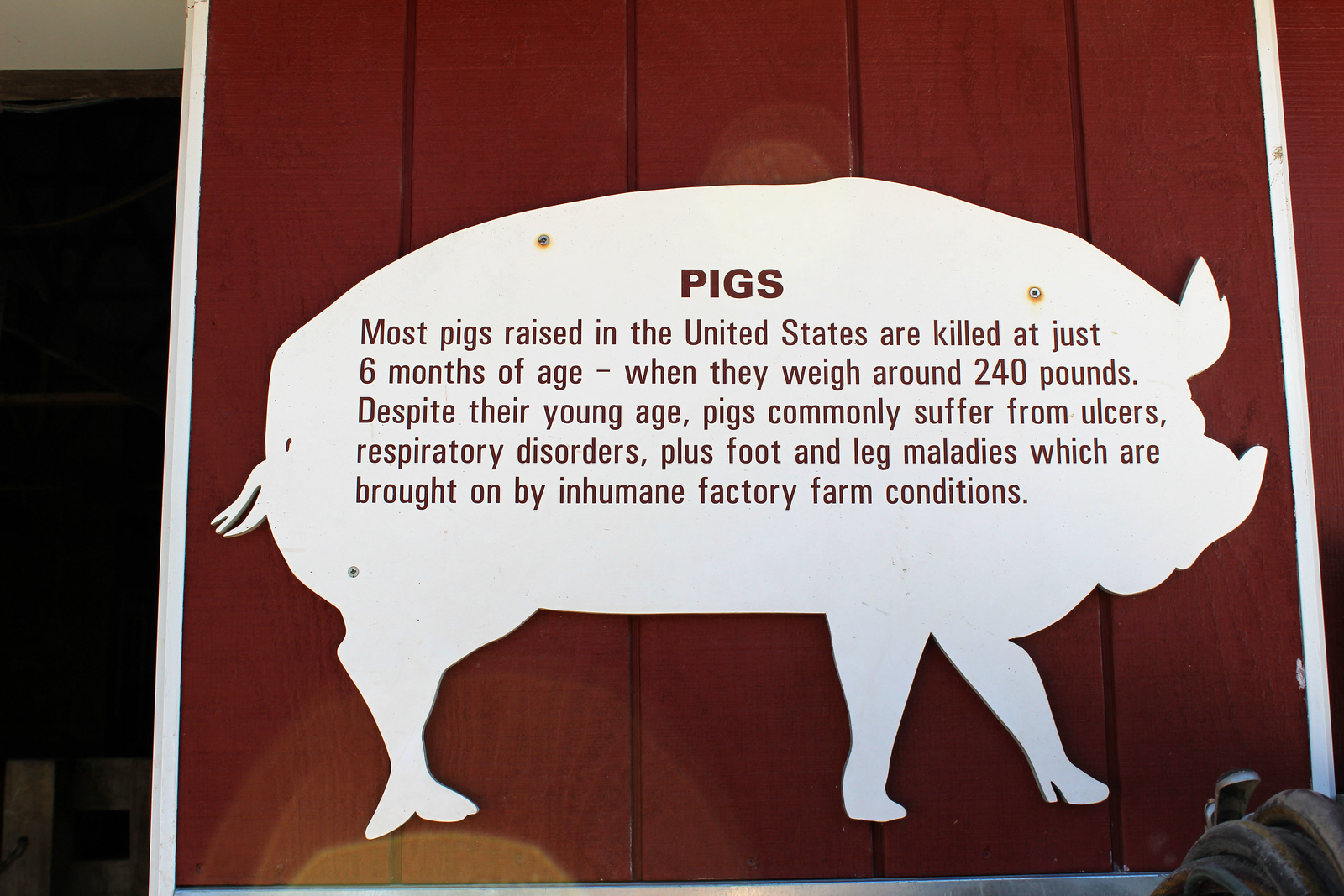 Free Time Around The Farm

After our official tour had been completed, we were allowed to wander around the farm premises as we liked. We were told not to enter any pens without a staff member there with us for safety reasons. As guests at the Farm Sanctuary Bed and Breakfast, we were allowed to spend the day at the farm even after check-out time (which was at noon) and join any other public tours if we felt like it.

Justin and I walked over to the goose barns where many geese and ducks lived between a couple of barns and an outdoor pond area. People were not allowed in with the geese as they can be temperamental at times. We observed them from behind the fence wandering and quacking about. 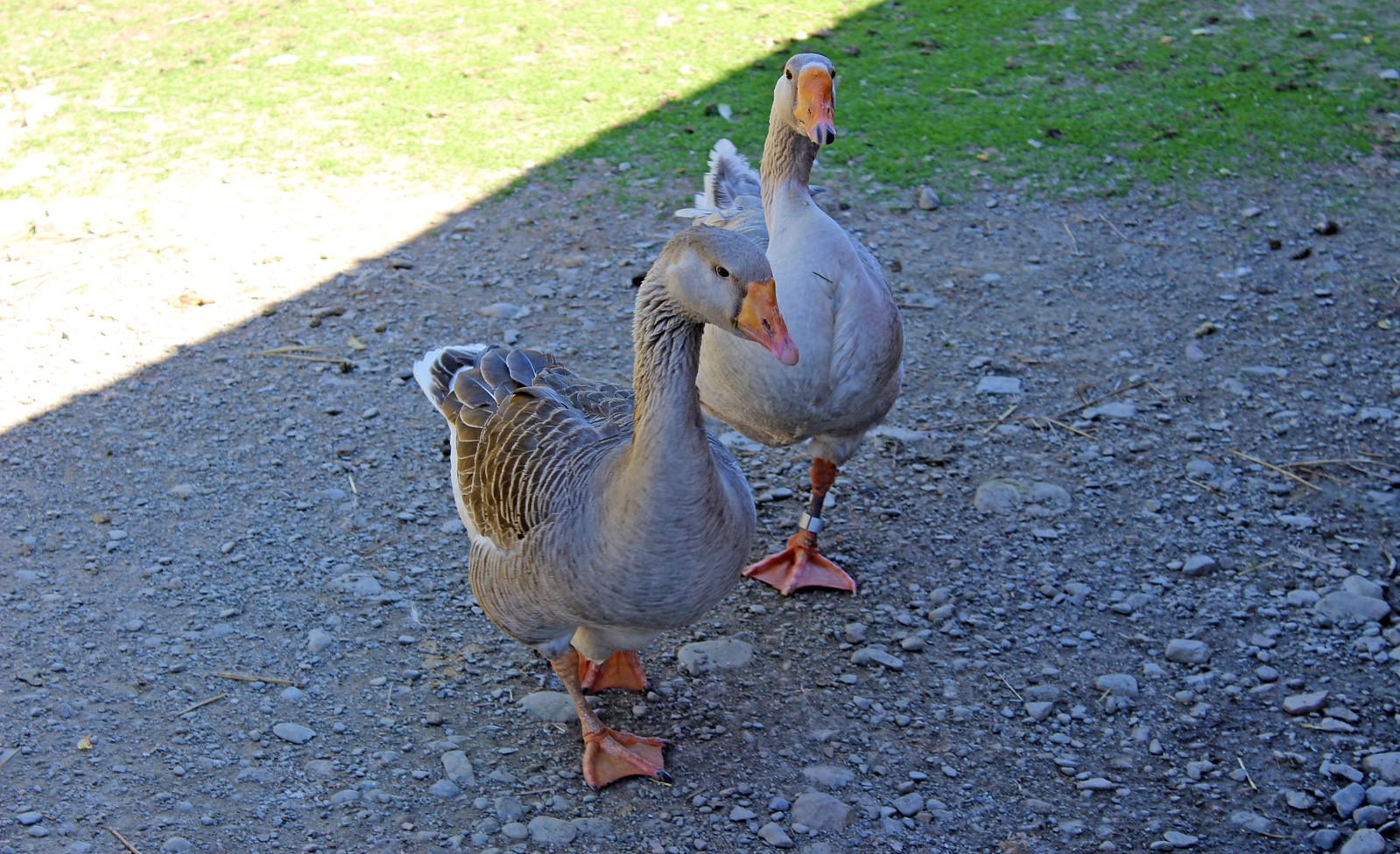 We thoroughly enjoyed our morning at Farm Sanctuary and it was really rewarding to be able to spend time with the farm animals. It is amazing to see some of the inner workings behind the scenes at a farm. Many of us are accustomed to city life and do not think about where our food comes from. We should all take steps to minimize the harm that we cause other living beings.

To learn more about visiting Farm Sanctuary or the charitable work that they do, please visit their website. To visit the Sanctuary in Watkins Glen, please visit this page to get directions and hours of operation. If you’re interested in staying overnight in a cabin at the farm, check out our detailed blog post all about our stay. Looking for more things to do in Watkins Glen? Check out our 1 day itinerary to the town.

Have you ever visited an animal sanctuary, or spent time on a farm before?

Really loved this blogpost - the photos are beautiful and the animals look so healthy and friendly. I want to hug a sheep today!

I love your photos of these sweet happy animals. My very favorite is that goat, it looks like he is smiling! Now I want to go visit a farm, have you guys ever tried WOOFing? I might look for a farm near me that way and stay a weekend :)

Never tried WOOFing before, but I have volunteered at a donkey sanctuary for a day helping out with farm chores! It would be fun to try out WOOFing though! Let me know if you end up trying it out!

These animals seem like a very happy animals. The cows look awesome! We've never visited any farm sanctuary, but next week we plan on visiting a turtle rescue and recovery center in Mali Losinj in Croatia. Since Croatia doesn't have sandy beaches, turtles don't normally live in our waters, but they do come this far in search of food, and then swim back when it's a breeding season. However, some get injured and they are taken care of in the town of Mali Losinj until they can be released back in the sea.

Oooh a turtle rescue! That sounds amazing! I'm glad that such a place exists in Croatia so the traveling turtles can be taken care of!

Adelina | Pack Me To

What a great post! That photo of Lauren with the sheep is too cute. I've never spent too much time on a farm before and other than owning a cat for a short while, I'm not around animals. They actually kind of scare me a bit. They do look really peaceful though.

Thank you! Maybe visiting a place like this would be helpful - the animals mostly kept to themselves, and you could give them a little pet if you wanted. I really don't have much experience with farm animals myself, and this is a great experience for anyone who wants to connect to this type of place a little bit more!

So much fun!! I never gave animals or food too much deep thought back in Australia. But now that I live a little more rural, I do. The stats are pretty shocking and yet we (most of us) so very little about it. It seems hard to turn back the clocks on factory farming given our lifestyles - but when you read this, it's obvious we have to try. Thanks a bunch for joining us for #SundayTraveler this week.

It is difficult when our lives are so industrialized nowadays, farming and animals included in that..obviously to have the supply available for fast food restaurants, etc, this type of system ends up happening...but it's sad because animals are living creatures, not machines! I'm glad that Farm Sanctuary can bring this type of awareness! Thanks for stopping by :)