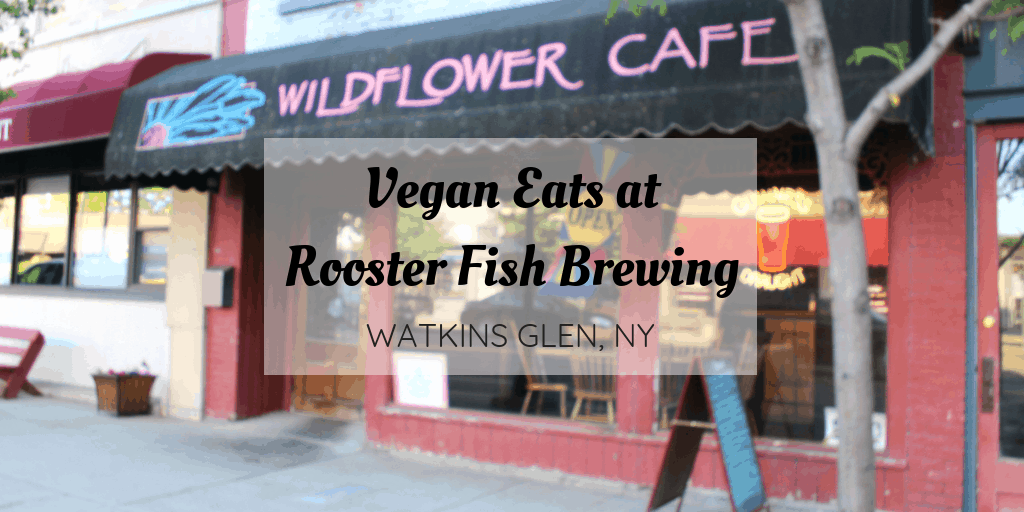 As vegans in Watkins Glen, New York, we had many choices of places to dine, especially for such a small town. Due to its proximity to Farm Sanctuary, as well as the university town of Ithaca, many restaurants in Watkins Glen serve up delicious meat-free meals. We chose to have dinner at the Wildflower Cafe, a restaurant operated in conjunction with a microbrewery called Rooster Fish Brewing. Update September 2018: Wildflower Cafe and Rooster Fish Brewing have rebranded as Rooster Fish Brewing Pub. Their menu has changed slightly, but they still have yummy vegan options.

We were warmly welcomed to the restaurant by our server, and asked if we’d like to try one of their beers. All of their ales are freshly brewed right in Watkins Glen using organic malts, American hops, and water directly from Seneca Lake (the lake where Watkins Glen is situated). It doesn’t get much more local than that! You can check out their full beer list if you’d like, but here is the one that Justin chose:

Mysterious Amber – Caramel in color, you can taste notes of apricot and freshly baked bread – what do you think? Try it with a burger or steak!

and I went with…

Summer Sky Hefeweizen – You can distinctly smell and taste a banana flavor with a clove finish produced by the yeast. In Germany, Hefeweizen is a breakfast beer.

I thought the part about the “breakfast beer” was pretty hilarious as I couldn’t imagine having a beer for breakfast! The part about the banana flavor was definitely true. It was very refreshing and delicious. It’s too bad that Rooster Fish Brewery didn’t serve up their ales in our neck of the woods, or else I would be ordering this one all of the time. Justin really enjoyed his beer as well, and said it was very refreshing and smooth. 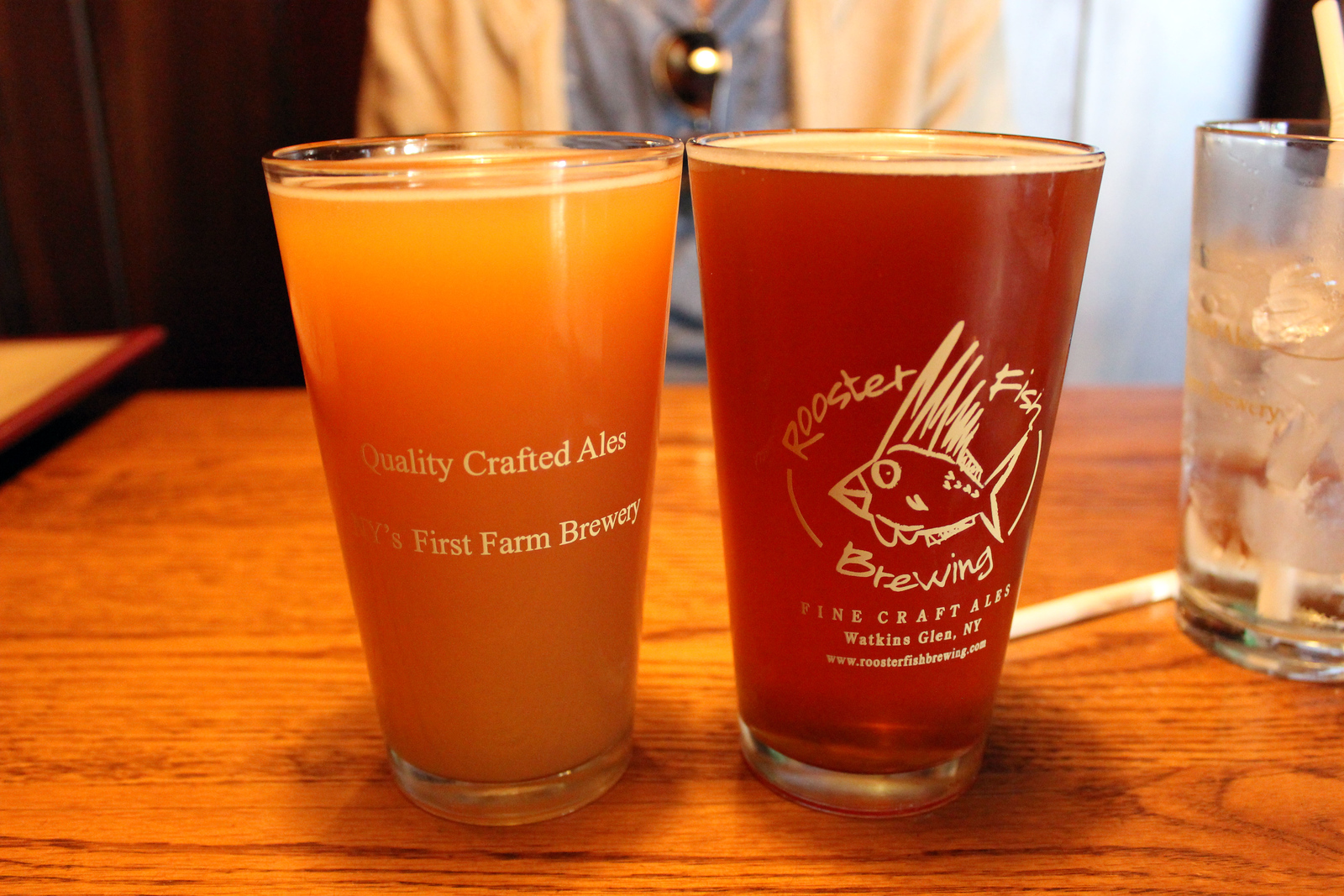 Rooster Fish Brewing is not a strictly vegetarian restaurant as you’ll encounter your typical pub fare. However, there are a number of vegetarian options on the menu. Our server was quick to point out what was vegan and what couldn’t be made vegan. She definitely was “in the know” and we were super grateful. For instance, we ordered an appetizer of sweet potato fries that normally came with a ranch dip (has dairy in it), and she was quick to ask if we would like to have a spicy ketchup dipping sauce instead. A huge plate of sweet potato fries reached our table, and we quickly devoured them. That spicy ketchup was definitely something special, and it had us thinking of making our own spicy ketchup at home.

For our main dishes, we both went with veggie burgers. Justin ordered the Portobello Burger, and I ordered the Black Bean Burger. Each burger came with a tasty little bean and corn salad on the side. We didn’t notice this until after we ordered our beers, but each menu selection has their own suggested “beer pairing”. Even though we didn’t drink the suggested beer with our burgers, the meal and our beer choices were great matches for one another!

Both burgers were cooked perfectly, were extremely flavorful, and it was definitely the kind of meal we were looking for after a day spent hiking around the gorge at Watkins Glen. We would gladly return for another meal or another pint. Here’s the perfect way to plan your day in Watkins Glen, including where to hike, eat, and sleep.

UPDATE: The new menu at Rooster Fish Brewing has even better vegan selections than before! They serve the plant-based Beyond burger and Seitan tacos. If I go back and eat these, I’ll report back with more photos and a full review!

Do you have a favorite microbrewery or beer?