From Taughannock Falls, we took a quick jaunt over to another State Park in the Finger Lakes Region of New York State, Robert H. Treman State Park. It is located just on the outskirts of Ithaca, about a 10 minute drive from Taughannock making it very easy to see both of these parks in one day. I would definitely recommend seeing both of these parks as they are both unique and lovely in their own way.

Before the arrival of European settlers to what is now known as New York State, the Cayuga Tribe of Native Americans lived in the area, one of the Six Nations of the Haudenosaunee (Iroquois). During the Revolutionary War, the Cayugas (allies of the British) were partially driven from the area by the Continental Army. Settlers from Europe started to move into the area in the 1790s and began to farm. In 1839, a water-powered gristmill was built in the park, which was used for grinding corn and wheat until 1917. This “Old Mill” has been fully restored and visitors are able to check it out. In 1920, Robert and Laura Treman donated 387 acres of land to the State, and Robert Treman became the first chair of the newly formed Finger Lakes State Parks Commission. Upon his death in 1938, this park was renamed in his memory.

The park’s area has increased since Robert Treman originally donated the land; it is now 1074 acres in size. Water has shaped the natural landscape of the park – over the past million years, glaciers covered New York State several times, drastically transforming the terrain. The most recent glacier moved through the Finger Lakes region, carving out deep troughs in its path. Water filled these steep troughs creating the 11 Finger Lakes, including Cayuga Lake in this area. Throughout Robert H. Treman State Park, Enfield Creek has continually flowed down the glacially-steepened hillside, cutting away parts of the soft sedimentary rock to create the park’s gorge and waterfalls.

When we arrived at Robert H. Treman State Park, we drove and parked our car at the Lower Park Entrance. After talking to a staff member at the information booth, we discovered that there are many hiking trails that would take us to Lucifer Falls. However, since we did lots of hiking the day before at the Watkins Glen State Park, and had just visited Taughannock Falls, we thought it might be a good idea to take the shorter walk towards the Falls from the Upper Park Entrance. If you choose to hike from the Lower Park Entrance, you can take the Gorge Trail or the Rim Trail, which both run about 2.25 miles in length.

We took a short drive along NYS Route 327 to the Upper Park Entrance where we were also able to park our car. Part of the trails were under construction at this time, so if you’re visiting, be sure to follow the Rim Trail from up top instead of the Gorge Trail. If you follow the Gorge Trail, you will reach a point where you won’t be able to walk any farther, and you’ll have to turn around and go back to the Rim Trail to continue your journey.

We continued along our hike and soon reached a staircase, taking us down below to Enfield Creek. There were many, many stairs – it was a great workout!

Going down the stairs was a bit of work (not as much as walking back up them!), but we were surrounded by so much green – there were trees, ferns, and plants growing everywhere!

There were several spots on the staircase where people had stopped for a rest, or just to stop and enjoy the view! Some fellow hikers were kind enough to point out a snake to us at one point hidden in the plants. I’m sure there were plenty of other animals living in the forest that were staying clear of the human visitors.

When we reached the bottom, we immediately knew that the descending climb down those stairs had been worthwhile. We were rewarded with a spectacular view of Lucifer Falls. At the bottom, we found a natural swimming pool below the waterfall, but at this time of the year it was a little too chilly to go for a dip.

To get a closer view of the Falls, we decided to follow in the footsteps of a few other brave individuals and cross the river. We took off our socks, shoes, secured the camera, and hoped that neither of us slipped on some rocks. We waded through the creek from the hiking trail to the other side, where we could perch on some rocky ledges closer to the waterfall.

Enfield Creek where we crossed to get closer to Lucifer Falls.

The water came up to my thighs at some points – it was a good thing I was wearing shorts that day! Justin is much taller than me, so the water only came up to his knees. We both made it across without falling in, and felt rather adventurous for doing so!

It was absolutely gorgeous down below Lucifer Falls, so please make sure you do the hike (either from the Lower Park Entrance or the Upper Park Entrance) and check out the waterfall from the overlook and from the river’s edge. If you’re here in the summer, you can wear your bathing suit and go for a swim in the natural pool!

Have you visited the Finger Lakes Region of New York State before?

We’re linking up this week with #WeekendWanderlust hosted by A Brit and A Southerner! Check out their post about where they call home in Jonesboro, Arkansas, as well as all of the other lovely blogs that have linked up there! Grab a coffee and travel the world from the comfort of your own home. 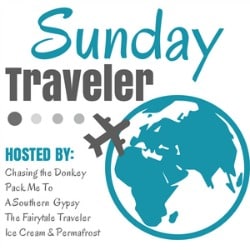 Part of the #SundayTraveler series hosted by some lovely travel bloggers! Check out Pack Me To’s post about Vancouver Neighbourhoods and add your link to the list!

Thanks for your article ! I arrived on your blog bc I was looking for some infos about sanctuary farm and hiking in the area. I don't have a lot of time to visit :-(. If you had to pick, which one would you recommend between Robert H State Park and Watkins Glen ? Thank you for your help !

This park looks great as well! Y'all are making me want ot visit this area more and more! My grandparents had a horse farm in upperstate NY and while I love NYC, I hate when people don't realize what else the state has to offer! Thanks for linking up!

I hope you guys get up to this area at some point! :)

Adelina | Pack Me To

So many fantastic parks to explore in this area. Looks gorgeous.

There were way more that we didn't have time to see as well - lots of beautiful places!

Looks like the makings of a great time, especially in the summer.

It was a lot of fun, and we had a beautiful day for it!

Looks like a fantastic place for walking. I liked the bit about the history of the park too.