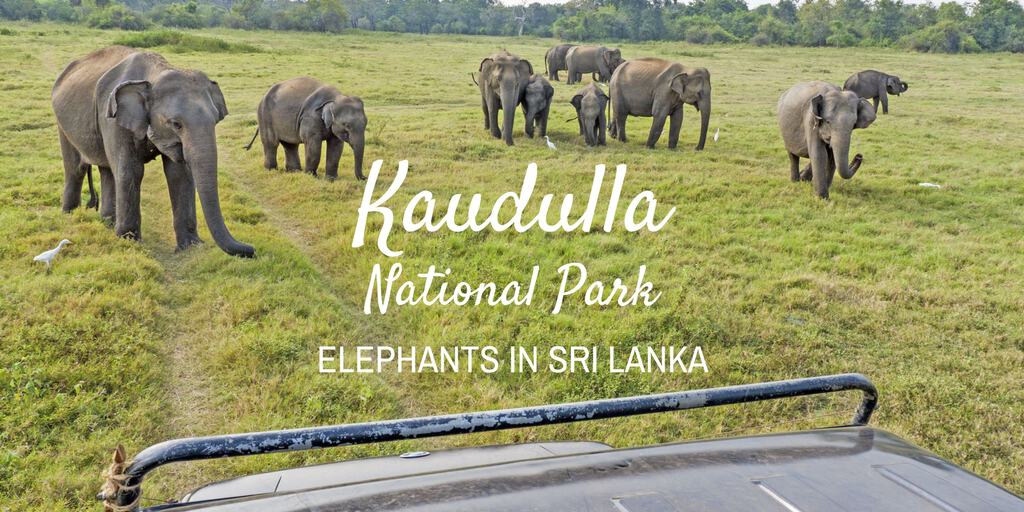 Go on a safari at Kaudulla National Park to see elephants in the wild.

Even though I spent a short amount of time in Sri Lanka, I travelled to extraordinary sites that really left me wanting more. I witnessed historical marvels like Sigiriya Rock and Dambulla Temple, and climbed natural wonders like Pidurangala Rock.

Sri Lanka is also home to Asian elephants. I’d never seen an elephant in the wild before. Although I visited the Elephant Orphanage and embarked on daily safaris while volunteering in Kenya, I’d never witnessed these beautiful creatures in their natural environment.

You can visit Kaudulla National Park to see elephants on a Sri Lankan safari, and that’s exactly what I did. 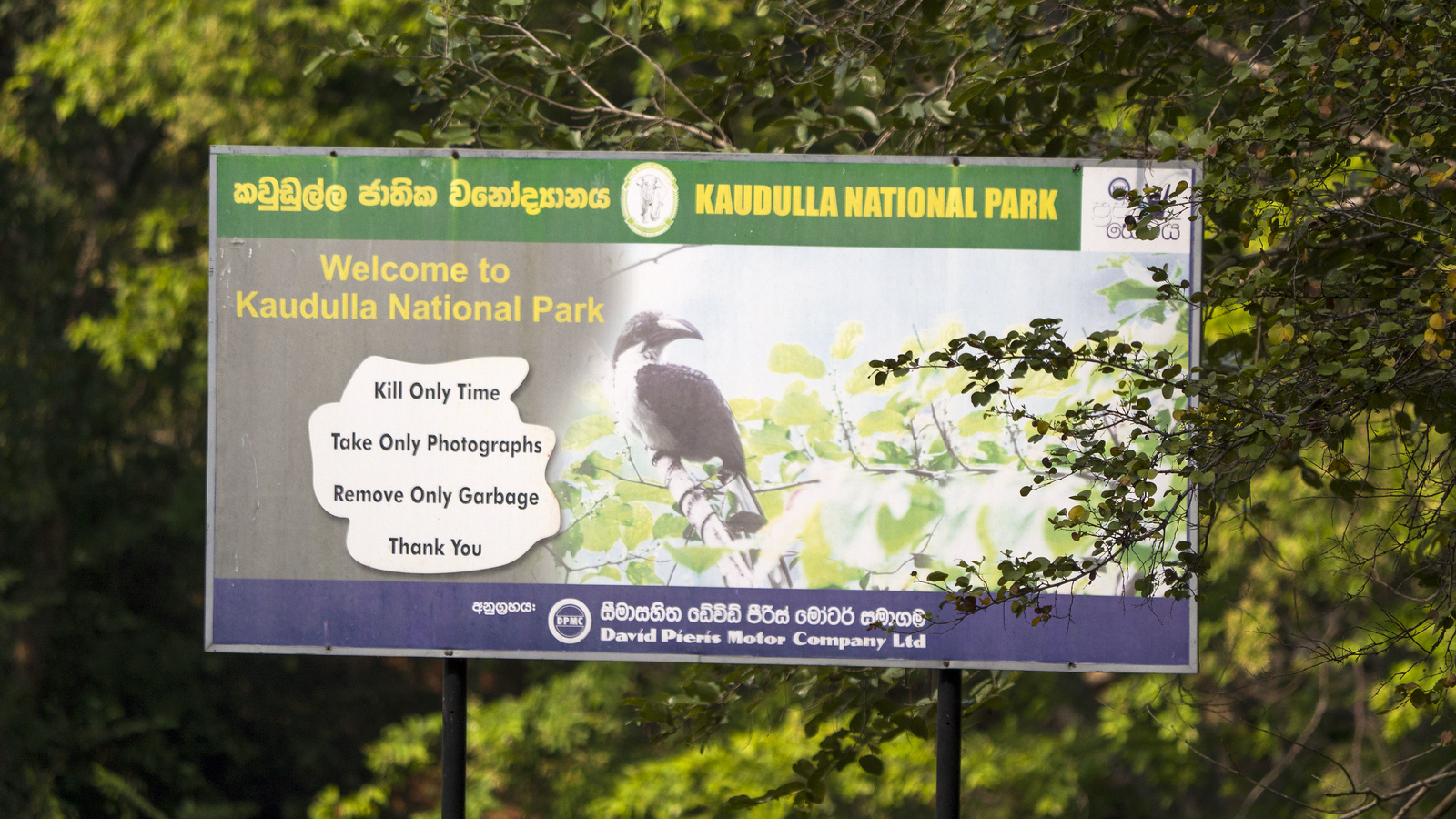 About 200km from Colombo, Kaudulla National Park is the newest of its kind in Sri Lanka. Established in 2002, it is the 15th national park on the island. It’s home to 24 species of mammal, 25 different reptiles, 26 species of fish, and 160 different birds. In fact, Kaudulla is officially designated as an Important Bird Area.

The best time to visit Kaudulla is between August and December with the most elephants present in September and October. However, I was there at the end of April. Would I see any elephants? 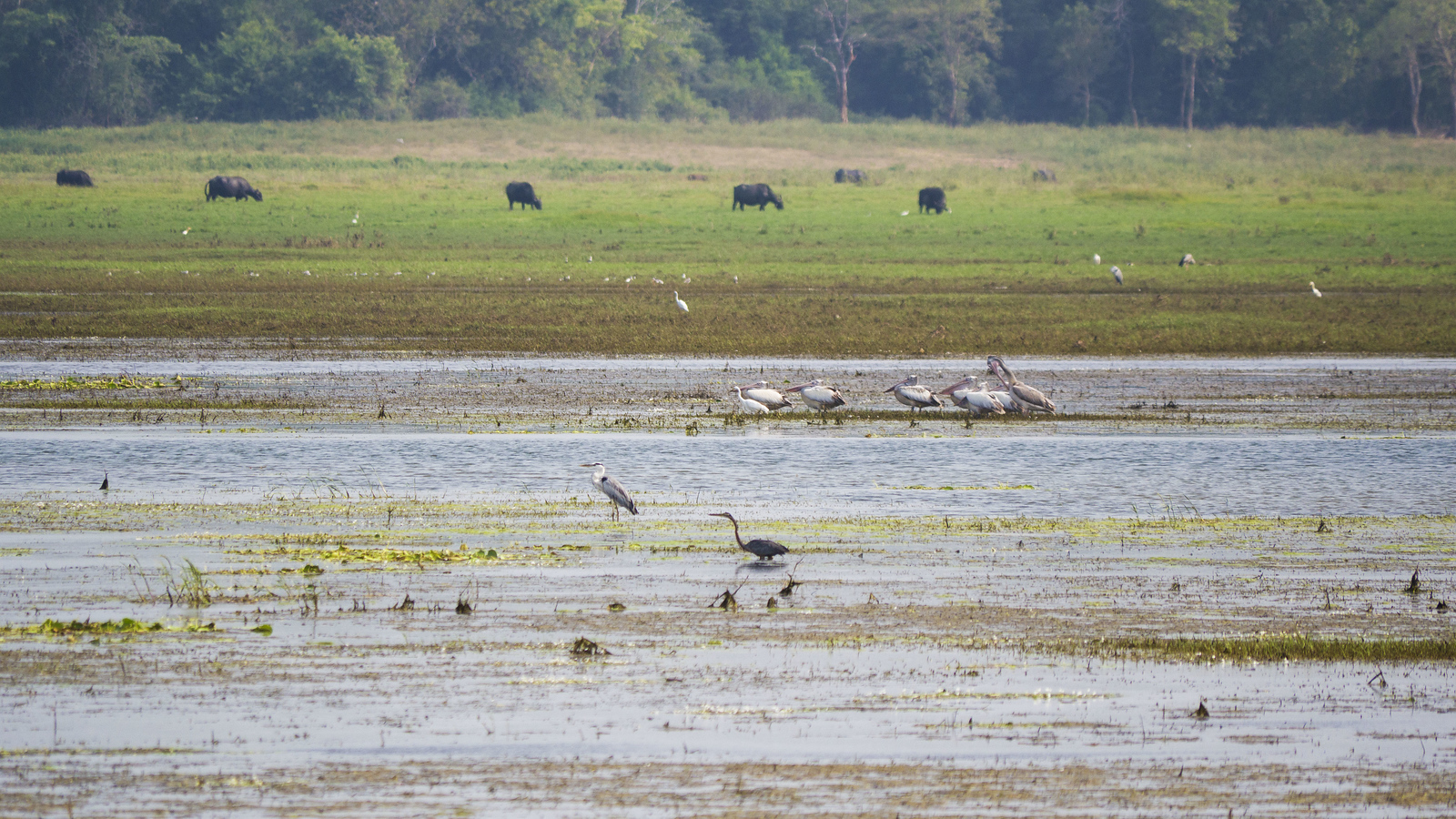 Our excursion to Kaudulla National Park was completely arranged through our stay at Mahagedara Wellness Retreat. If you’re not staying at Mahagedara, you can arrange a tour through many local companies. We travelled there in an open-air jeep so we could stand up and get the full view of our surroundings.

We were a little bit spoiled. Even before entering the wildlife reserve, there was a lone elephants by the side of the road, munching on some grass. Our jeep pulled to the opposite side of the road so we could catch a peek without disrupting his meal time.

The entrance fee for foreigners is 2700 rupees (about $22 CDN). We drove down a dirt road with only one other jeep in sight. The best time of day to visit is in the late afternoon or early evening. Even at this time, there were only a few other jeeps at the park.

Lakmali, the owner of Mahagedara Retreat, told us that she’s seen Kaudulla much busier. At times, it can be completely packed with jeeps, with every passenger trying to catch a glimpse. Even still, I’ve heard that Kaudulla is less popular than Minneriya National Park.

I asked Lakmali if there are limitations on the amount of jeeps that are allowed into the park. Unfortunately, there aren’t. The elephants are wild, yet they are used to the vehicles driving around. Hopefully, those who visit remain respectful and quiet as to not disturb the elephants. I feel that there should be only a certain amount of vehicles allowed in the park at any time, though it’s not something that is currently enforced.

Yes, I’m making you wait to see more elephants! I was fascinated by the bird life at Kaudulla. There were peacocks and other birds like storks, pelicans, spoonbills, and more.

I even spotted a white bird with pink legs. Sadly, I’m not an expert in birds, so if you know the name of this one, be sure to let me know in the comments. 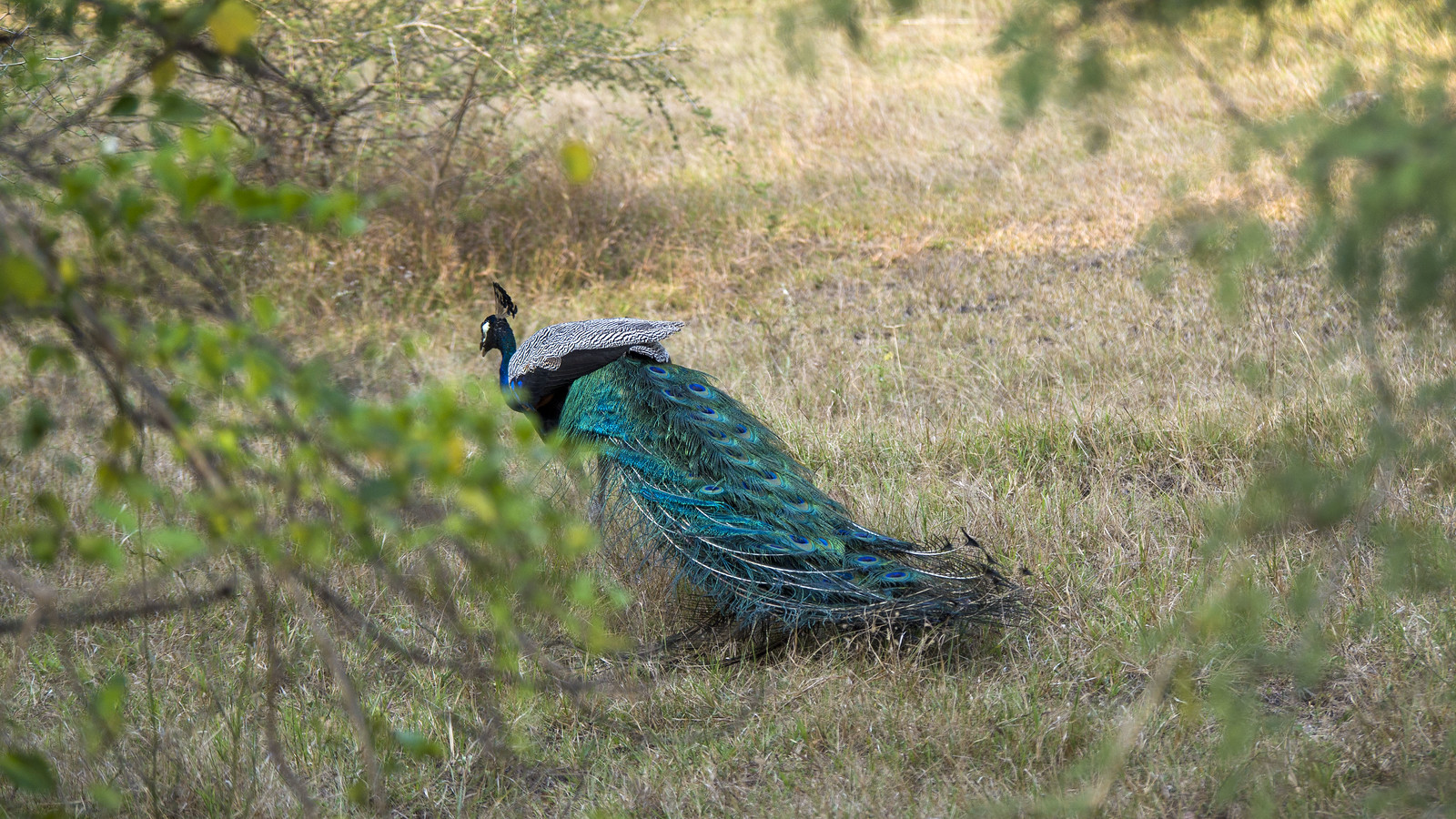 We drove through the wildlife preserve and our vehicle stopped on several occasions – every time we saw a herd of elephants. It was important to maintain a safe distance away from them. At times, they approached our jeep and we caught an even better view of these giant animals.

Our driver was trained to know the signs of an aggressive male elephant. If one approached our jeep in a threatening way, he backed up to a safe distance. This kept us safe and ensured that we didn’t bother the elephant.

There were herds of elephants, including many babies. The group often gathered around the baby elephant, keeping it safe in the middle.

For the most part, the elephants at Kaudulla National Park were focused on eating grass. Their massive trunks swept the ground back and forth, back and forth. After a while, the elephant picked up a big clump of grass with its trunk before placing the roughage into its mouth. It was fascinating to watch!

You can see my entire photo collection of elephants at Kaudulla National Park here. 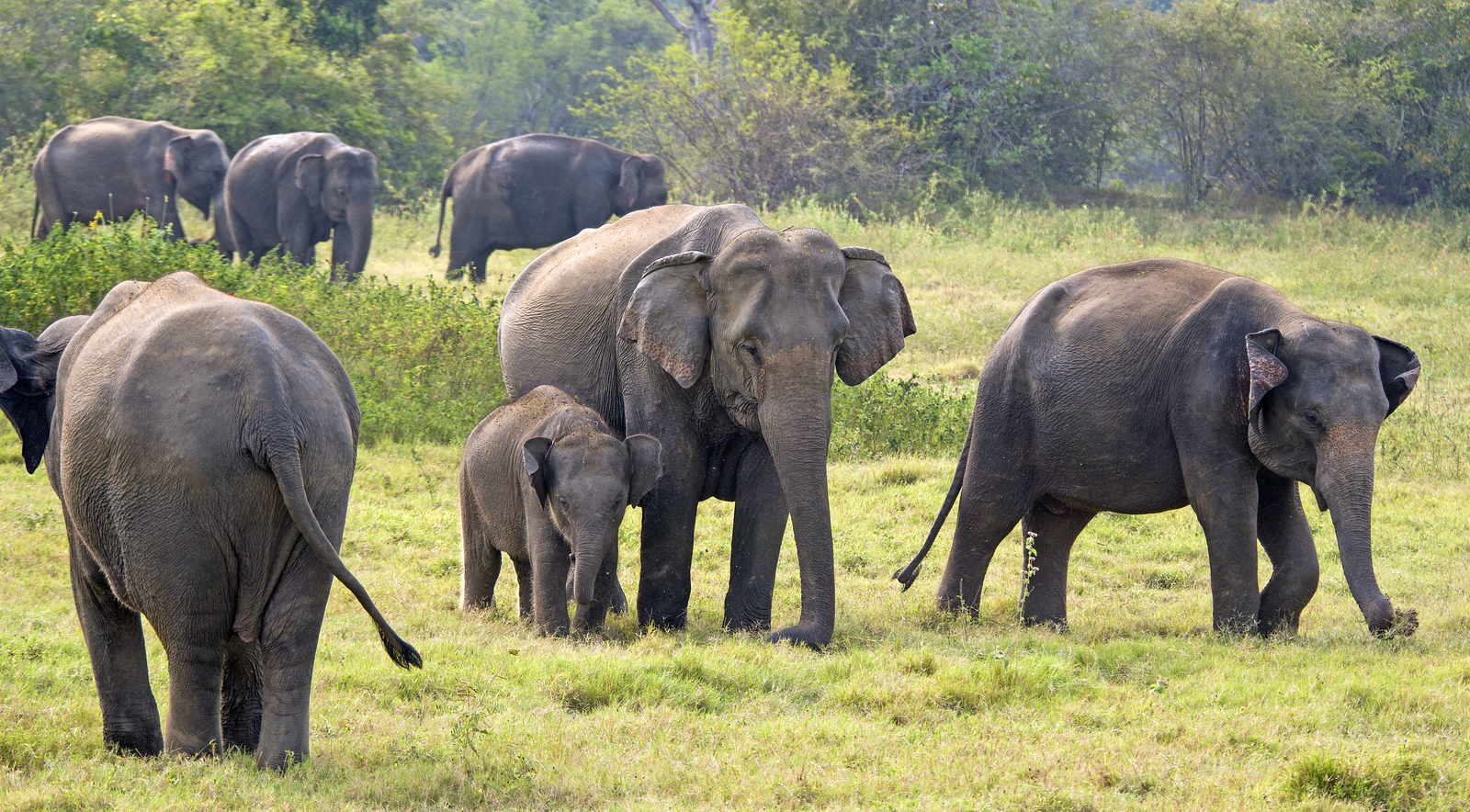 After we were finished seeing several herds of elephants, we drove back to the front entrance. On our way, we still spotted more birds and animals. Notably, we saw several monkeys up in the trees, even a pregnant one.

Want to take amazing photos of wildlife? Check out the camera equipment we use for our photography!

It’s important to begin a dialogue about the future of elephants in Sri Lanka. Elephant populations are at risk, despite the fact that they’re rarely poached for ivory here. Due to a high human population, elephants are running out of places to live. Sadly, there are conflicts between elephants and humans, particularly in rural and farming communities.

Even while staying at Mahagedara Retreat, we were told about the elephants that tromp through the accommodation from time to time. The elephants have fully consumed their crop of rice from the rice paddies on site on two occasions in the past (the rice has only escaped the wrath of elephants once so far).

If elephants did pay us a visit at Mahagedara, we were informed to go indoors and stay inside until they pass through.

Every day, we heard the sounds of firecrackers in the distance. Farmers set off these firecrackers to scare away the elephants in an effort to protect their crops.

About 200 elephants die every year in Sri Lanka, and it’s usually due to citizens in rural areas retaliating or defending themselves. Sometimes the elephants are poisoned or perish in explosions. At the same time, 50 people die from elephant attacks each year.

Thankfully, efforts and discussions by organizations like Born Free are concerned with elephant conservation and animal welfare. While I don’t have the answers, I prefer the approach by those at Mahagedara Retreat. They live with the wildlife and not against it. If the elephants choose to walk through their hotel, they have no choice but to let them. If some of their crops are eaten by elephants, that’s unfortunately what happens.

I realize that many farmers and rural communities depend on their crops for their livelihood. Unfortunately, I don’t have all of the answers. I’d like to believe that there are ways that wildlife and human populations can live together in harmony.

For ways you can see view wildlife responsibly, please check out my article: Wildlife Tourist Attractions to Avoid (And What to Do Instead).

As I mentioned previously, I stayed at Mahagedara Retreat. It’s a beautiful space offering delicious meals, yoga, a wellness spa, and more. Mahagedara is located near many attractions of the Cultural Triangle, including Sigiriya Rock, Dambulla Temple, Pidurangala Rock, Kaudulla National Park, and more. It’s a fantastic home base and a destination in its own right.

You can easily book excursions to many attractions and significant sites from Mahagedara Wellness Retreat. 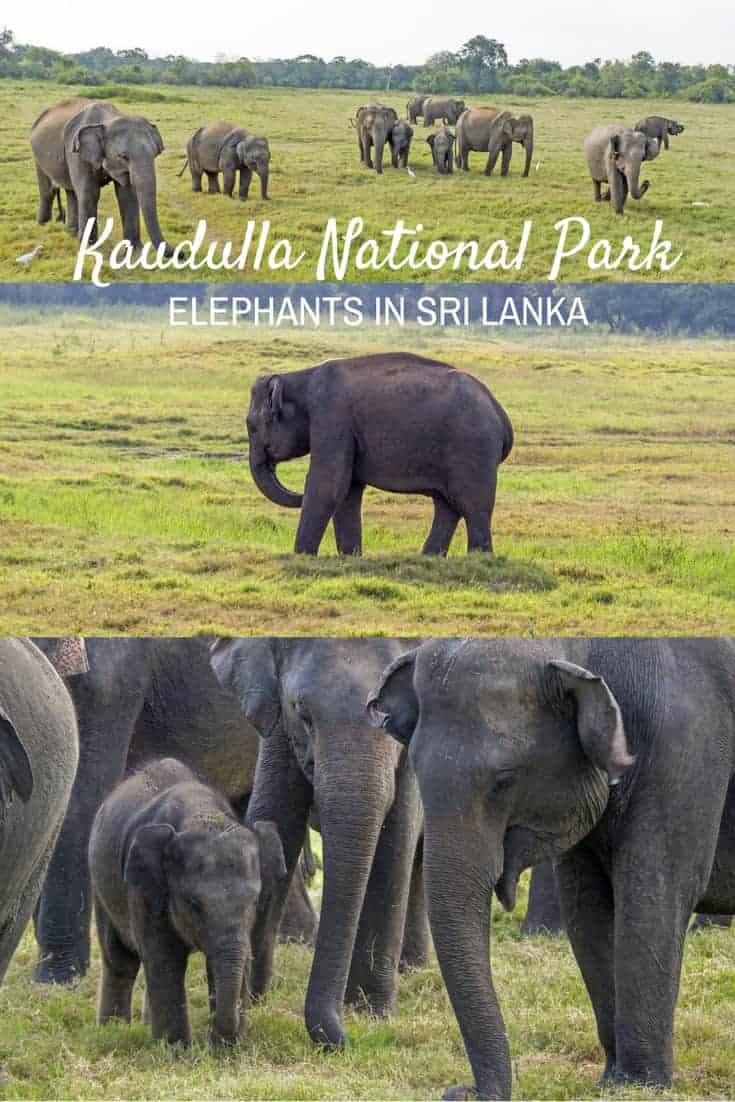 Have you ever seen elephants in the wild and where?

Kaudulla National Park is one of the biggest park in Sri Lanka. I am a traveler. I already traveling many countries National Park. National park is one of the best place for traveling. There have every thing to traveling. Rock and hill is so adventure places. Every year me and friend going to 1 National park. I think this time We go there. this park is so big. I want to know more information about this places can you told me some information and problem to face there?

I love to play with elephants. They are really naughty if they are in mood. I visited Kerala 2 years ago and i get the chance to play with and make them bath. Thanks for sharing the information of National Park.

Sri Lanka is high on our list with the kids and this would be the most amazing experience! Love this so much xx

Thank you for your informative article.

If You are an elepahntlover, Here are all the places in Sri Lanka to see elephants.