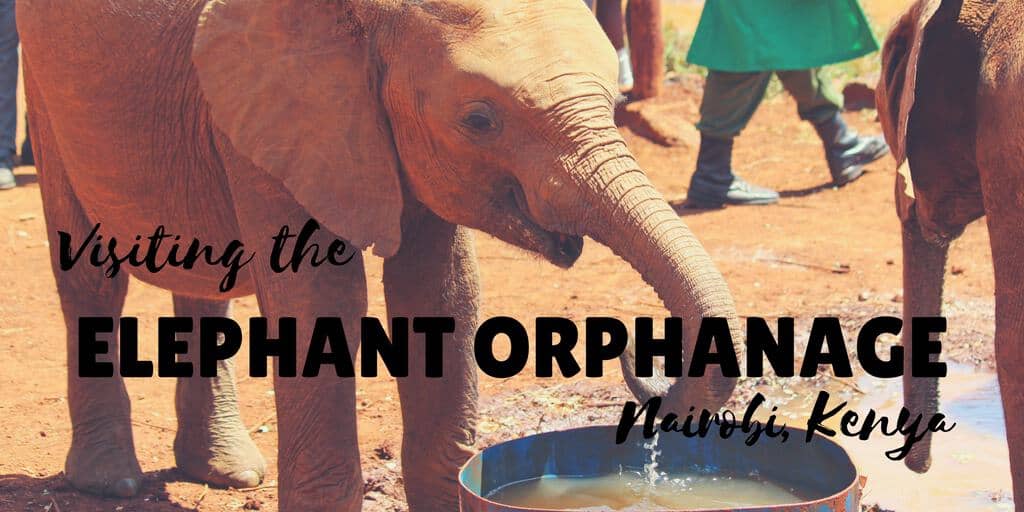 Watch baby elephants and support a great cause at the Elephant Orphanage Nairobi.

When I traveled to Kenya, I volunteered at a wildlife conservancy. One of my duties was participating in anti-poaching efforts at the preserve. While I didn’t see or confront any animal poachers, there was so much evidence of poaching in Kenya. We manually removed hundreds of wire snares from the conservancy grounds. Our small group combed regions of land by foot, seeking out curved pieces of metal. The snares were often made from old bits of wire fencing.  Bent into loops, they trap the feet and legs of animals as they roamed by. After the animal becomes trapped and falls to the ground, the poacher moves in and claims his keep.

Every time we searched, we’d return with armfuls of metal and wire loops. With every snare we recovered, one animal’s life was potentially saved.

Poachers notoriously target elephants for their ivory. Other problems that threaten both elephants and rhinos in Kenya include loss of habitat, drought, and deforestation.

Thankfully, the David Sheldrick Wildlife Trust aims to conserve and protect wildlife and their habitats in Kenya. Founded by Dame Daphne Sheldrick and named after her late husband, the DSWT is one of the most successful rescue and rehabilitation centers for orphaned elephants in the world.

The David Sheldrick Wildlife Trust embraces all measures that compliment the conservation, preservation and protection of wildlife. These include anti-poaching, safe guarding the natural environment, enhancing community awareness, addressing animal welfare issues, providing veterinary assistance to animals in need, rescuing and hand rearing elephant and rhino orphans, along with other species that can ultimately enjoy a quality of life in wild terms when grown.

I recently started reading Dame Daphne Sheldrick’s memoir, Love, Life and Elephants, and I highly recommend checking out this book if you’re interested in Africa, animals, or wildlife conservation efforts.

When a baby elephant is rescued, it usually means that their mother and father have been killed. Generally, the parents are killed for their ivory by poachers. Baby elephants depend on their mother’s milk for two years after they are born. An orphaned elephant will not survive in the wild.

Daphne Sheldrick spent thirty years perfecting a suitable elephant formula and the proper methods of raising orphaned elephants so they can be released back into the wild. To date, the DSWT has rescued and released over 150 elephant calves that would not have survived otherwise.

The DSWT’s field work is based in Tsavo East National Park. The orphaned elephants, when they are old enough, are introduced and accepted into the wild herds that live there. There are extensive details on the DSWT website about raising elephant orphans if you’re interested in learning more details.

You can also learn about every elephant’s story, including tales of their rescue. Some of the stories are truly heartbreaking. Many elephants are found with snare wounds or even standing beside their dying mothers.

Interested in learning more about responsible wildlife tourism? Check out the attractions you should always avoid and what to do instead with this handy guide!

MY VISIT TO THE ELEPHANT ORPHANAGE

I was beyond excited to visit the Elephant Orphanage Nairobi. On the last day of my volunteer expedition with Animal Experience International, we were treated to a visit there before flying back home.

Members of the public can visit the Elephant Orphanage between 11am and 12pm daily (except on December 25th). The entrance fee of 500 Kenyan shillings (about $5 USD) directly benefits the elephants. There’s also a small gift shop on site with all proceeds going to the DSWT. For $50 (or more) a year, you can sponsor an elephant and receive updates about your adopted elephant.

A trip to the elephant nursery is something you must do when you travel to Nairobi. During your visit, you’ll see the baby elephants arrive for their midday feeding and mud bath. 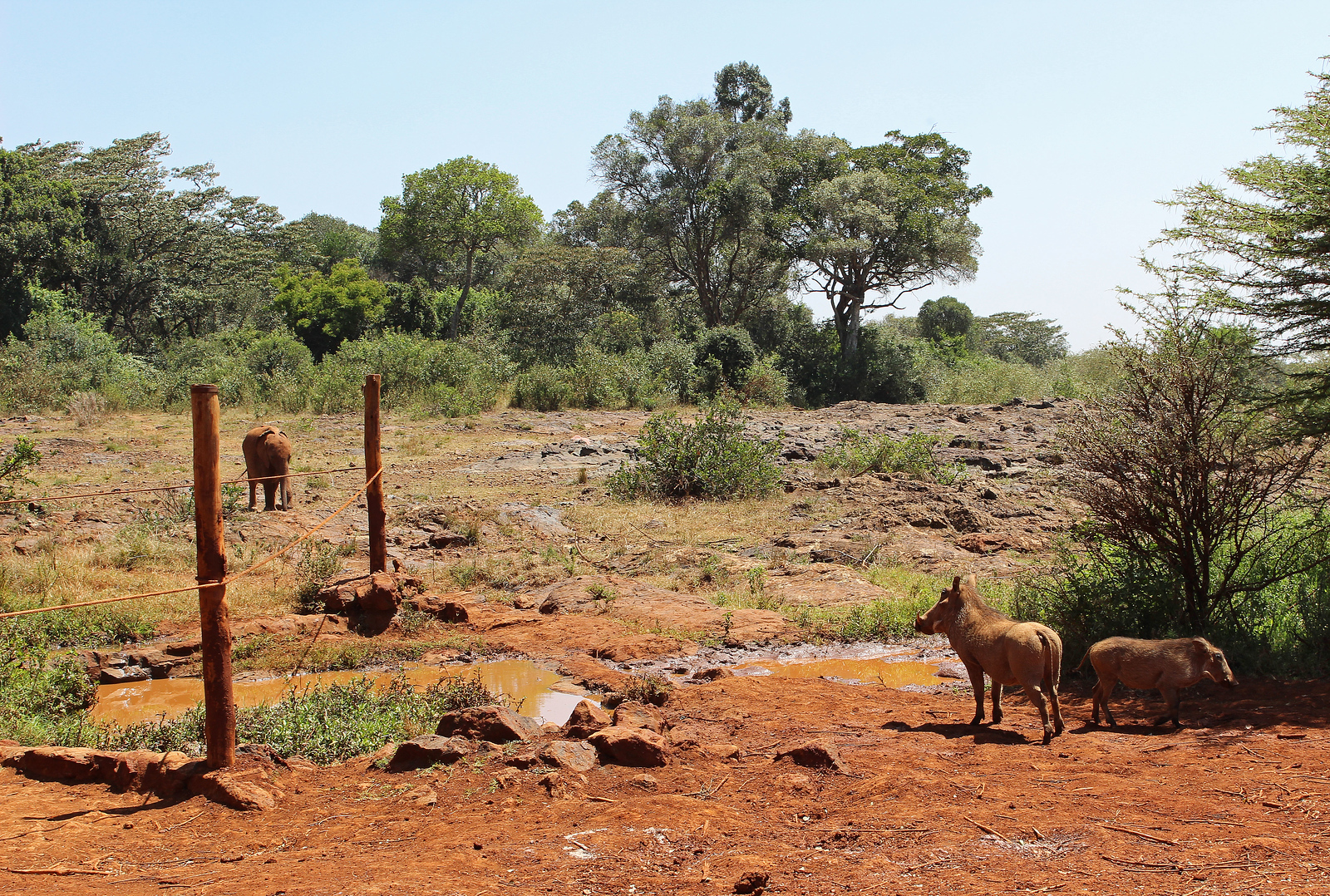 In a large, circular arena behind a thin piece of rope, we patiently awaited the arrival of the orphan elephants. Some warthogs crashed the party, briefly stealing the spotlight. From the bush off in the distance, elephant after elephant materialized from the tall grass. These tiny elephants romped across the dirt towards their feeding grounds. I could feel the collective excitement of the visitors in the air.

These infant elephants were so carefree and joyous. One after another, they bounded and leaped in our direction. I couldn’t tell who was more excited – us or them. I giggled and marveled at how cute they were. They were excited to eat and play.

The first order of business was drinking milk. The elephants were hungry for a meal. The elephant caretakers held bottles of milk for the infants. In some cases, the elephants were skilled enough to drink from the bottles themselves without any additional help. There were large buckets of water stationed throughout the circular feeding area where we watched them drink. 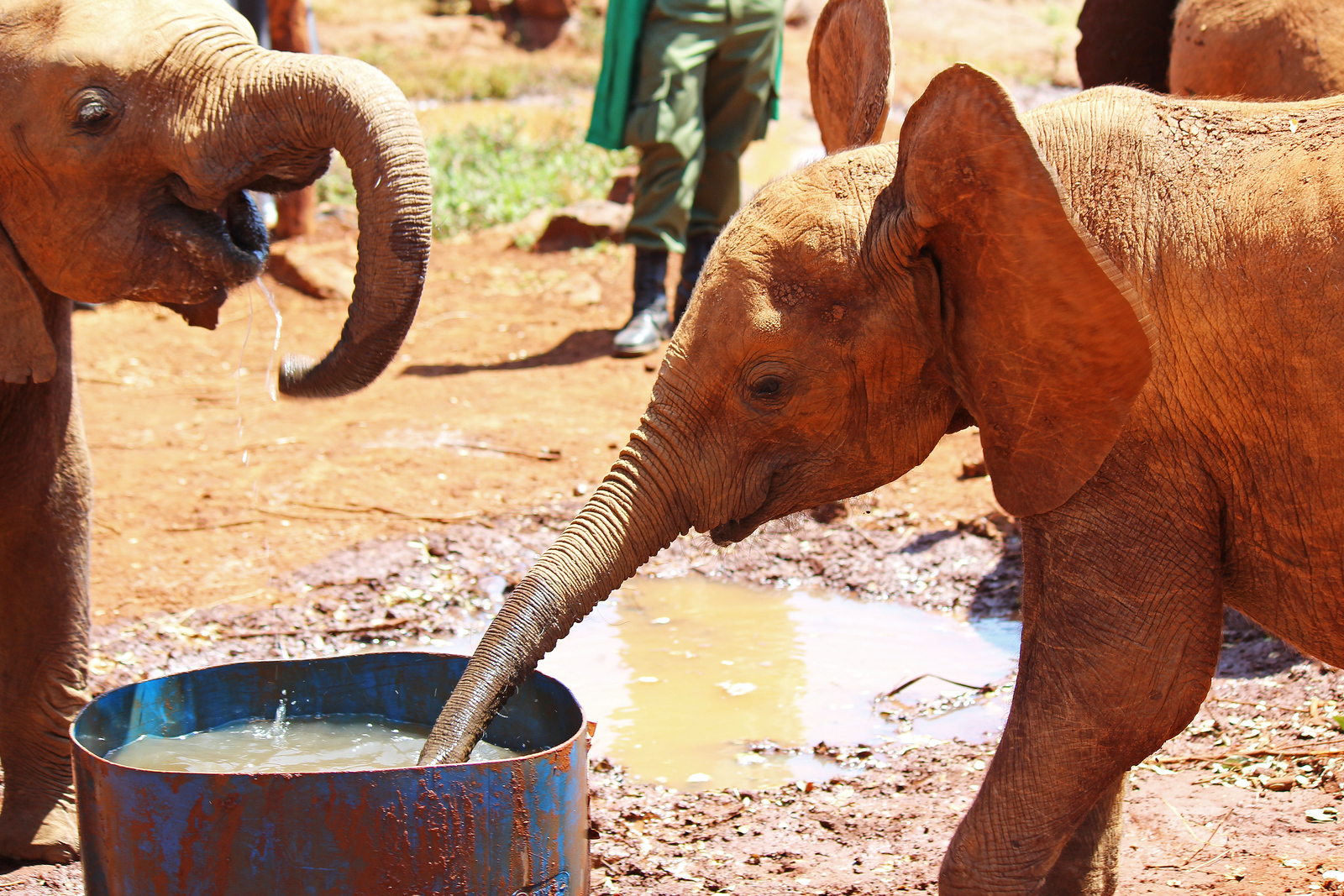 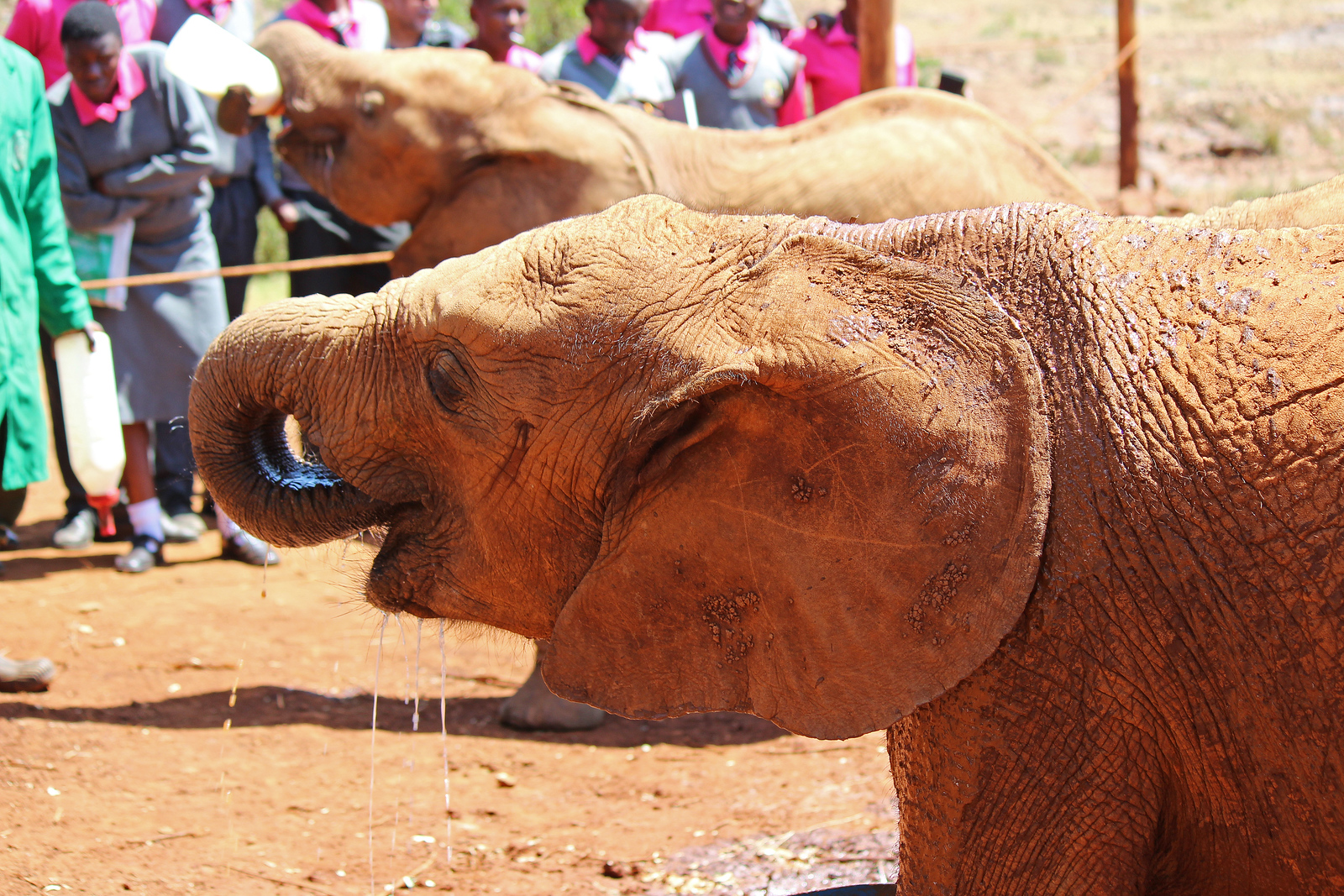 At one point, some ostriches appeared on the scene and decided to drink some of the water. The baby elephants didn’t mind sharing! 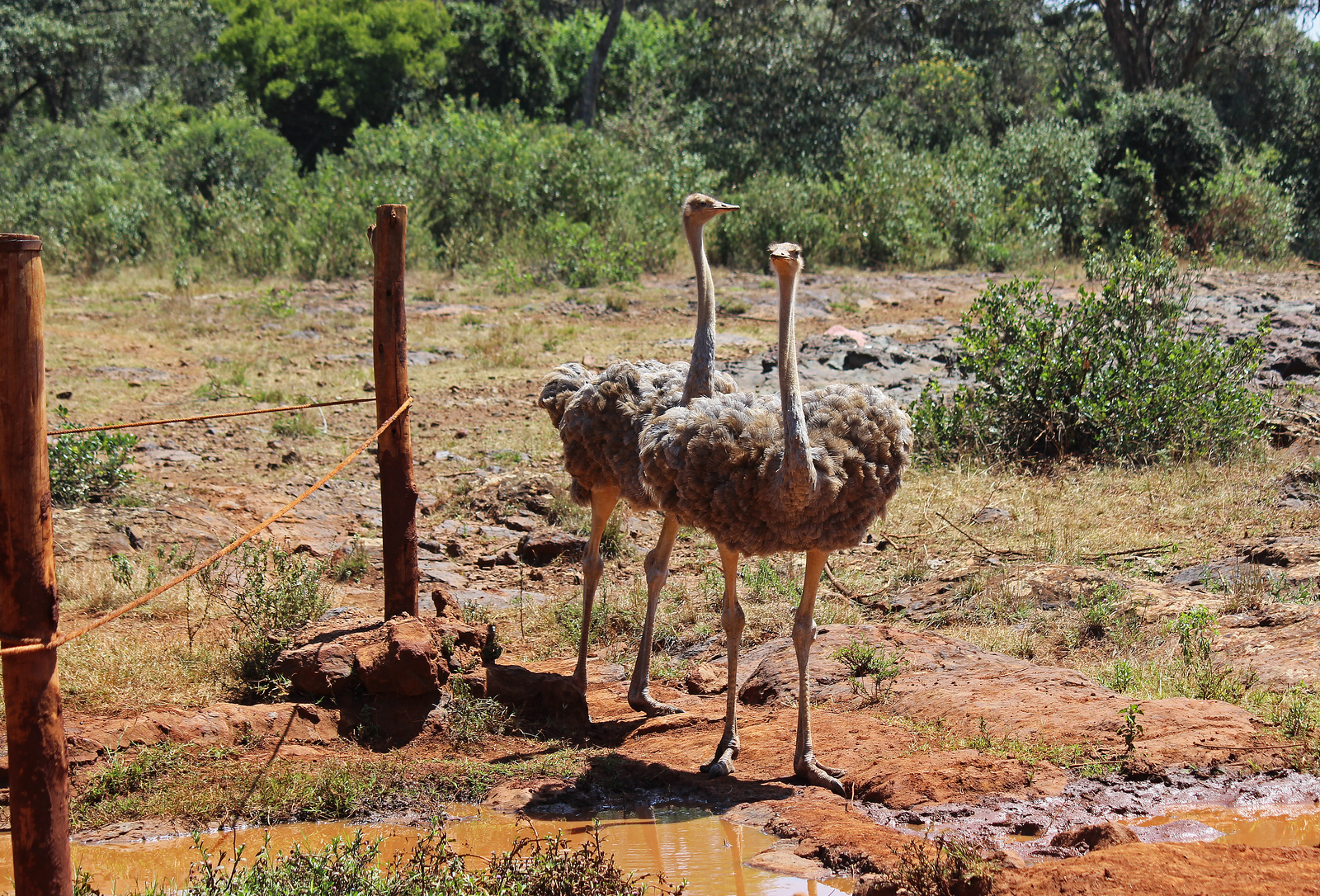 Initially, the very young nursery elephants came out to eat and play in the mud. Next, some of the older infants pranced out for food and mud baths. It was so interesting to watch these adorable animals bathe, drink, and roll around. They would pick up things like twigs and sticks and parade them around.

The elephants tossed dust into the air and covered themselves with mud. This was an attempt to stay cool under the hot, African sun. They also played around with the other elephants in the muddy water. 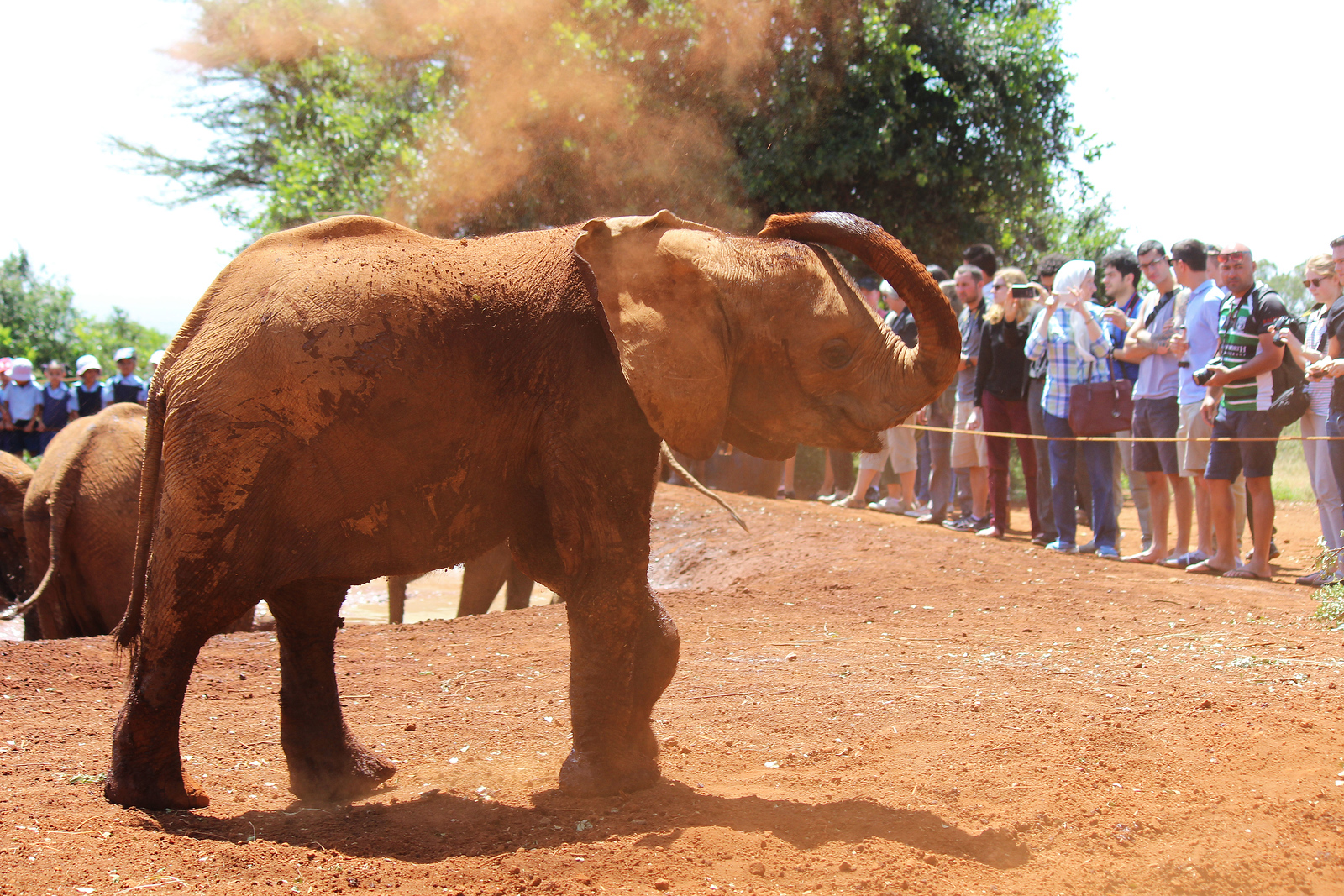 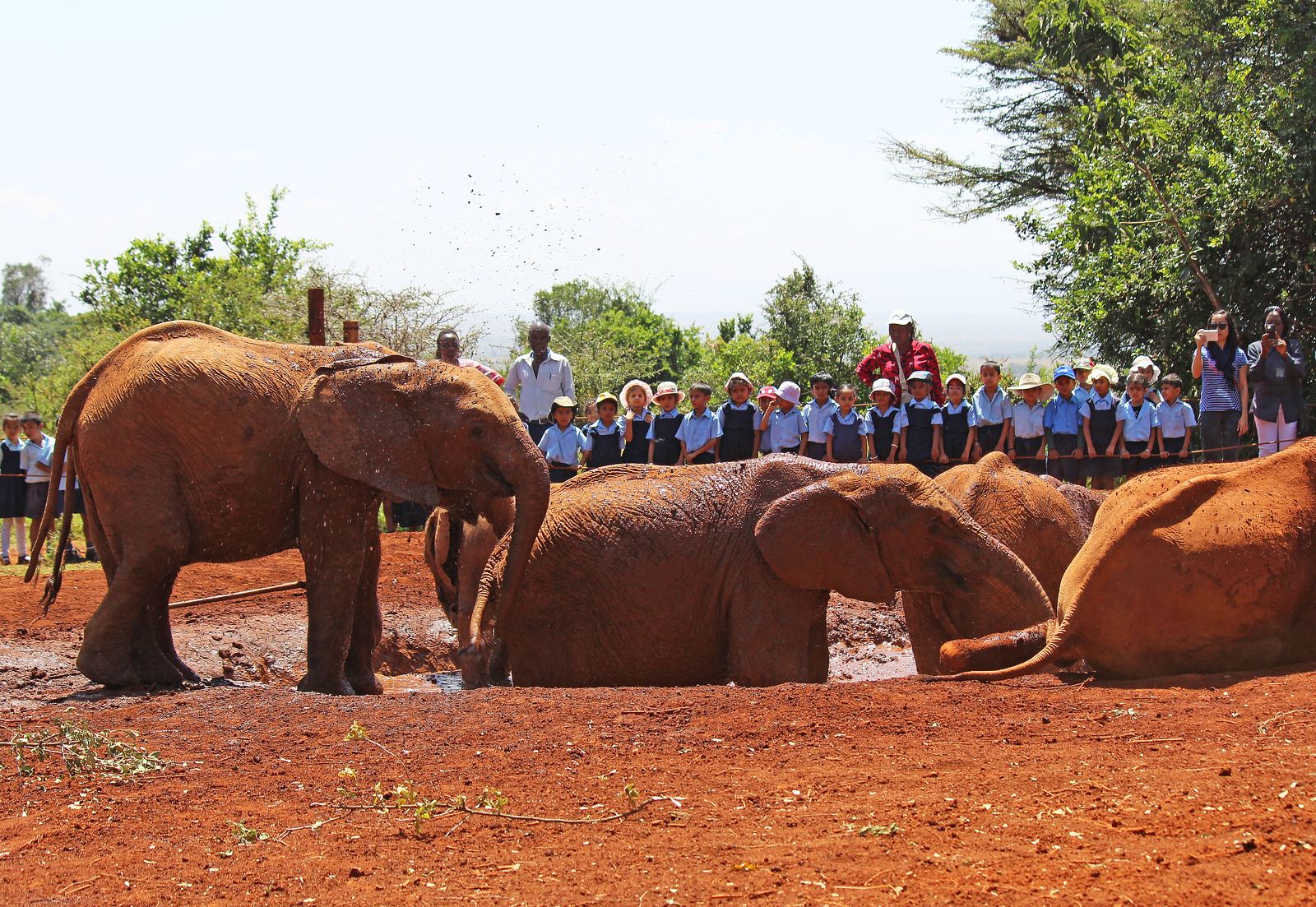 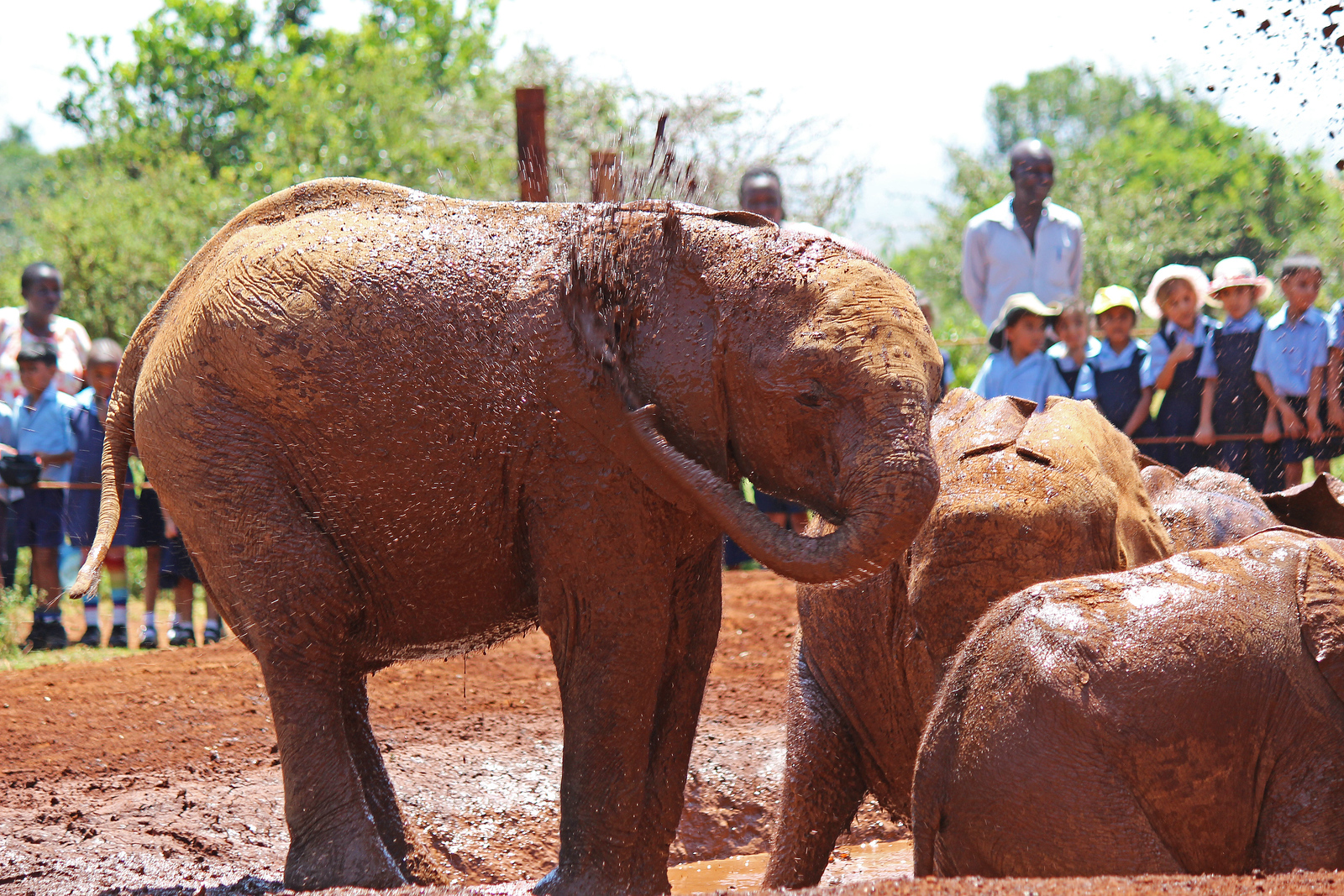 Some of the elephants were a bit cheeky. One elephant kept head-butting another one repeatedly, playing around with him. The baby elephants rolled around in the mud together, even climbing on top of one another. It was almost like they were kids, wrestling around. 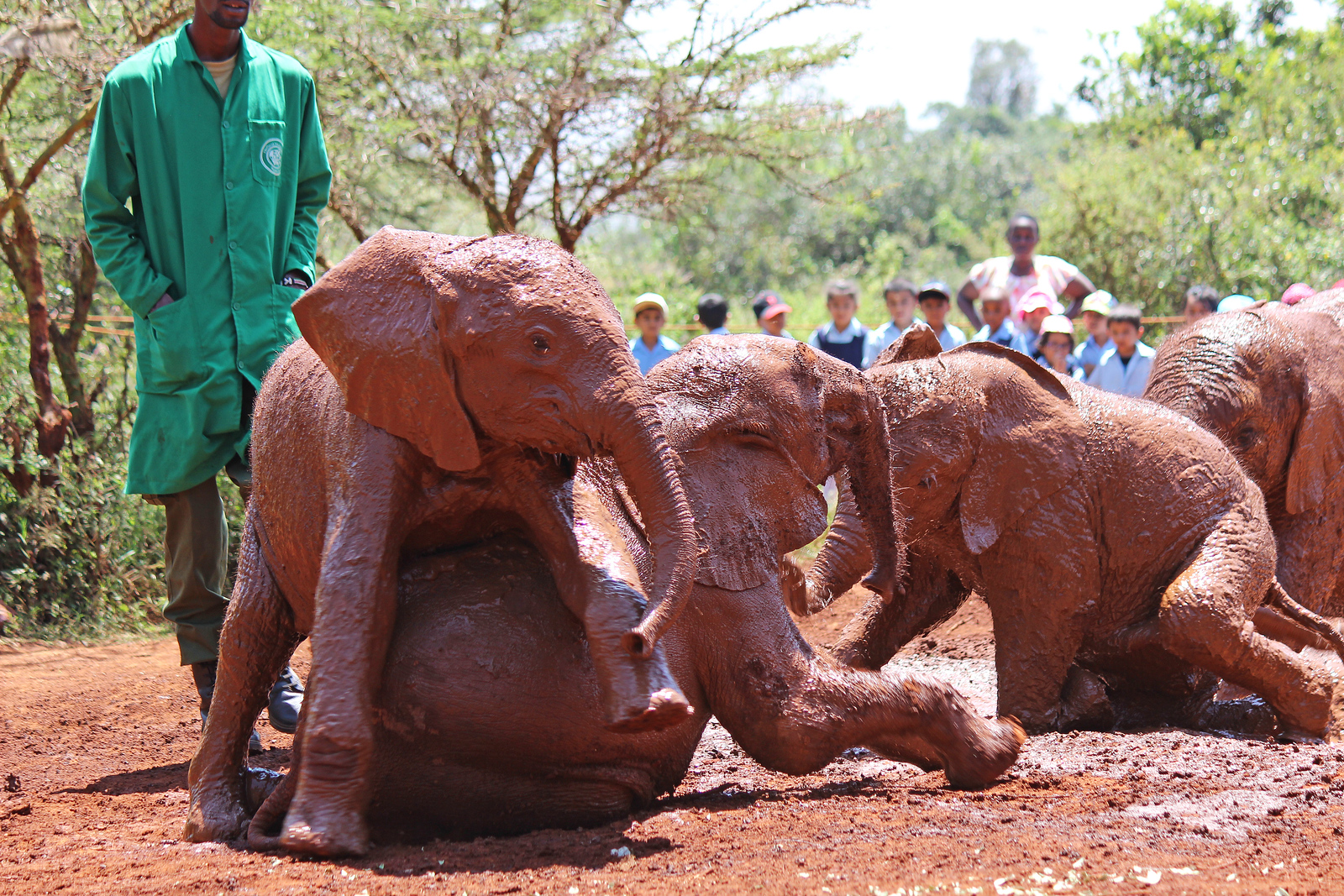 If the elephants come over to you, you can pet them and touch them. Be prepared to get a little bit dirty! The elephants can be pretty muddy.

Lots of groups of school children were visiting on field trips. It’s important that the children of Kenya become interested in wildlife protection and preservation. 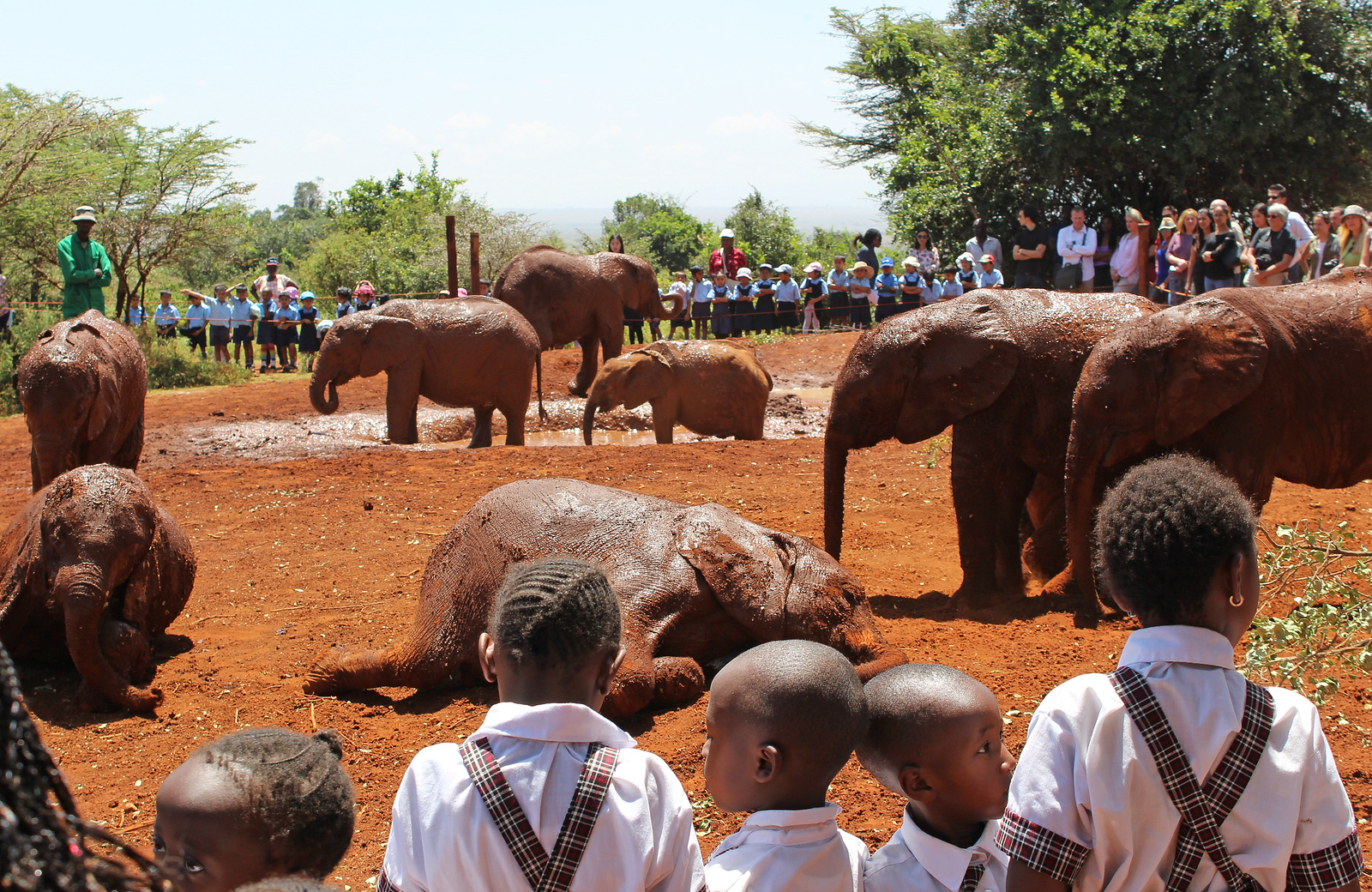 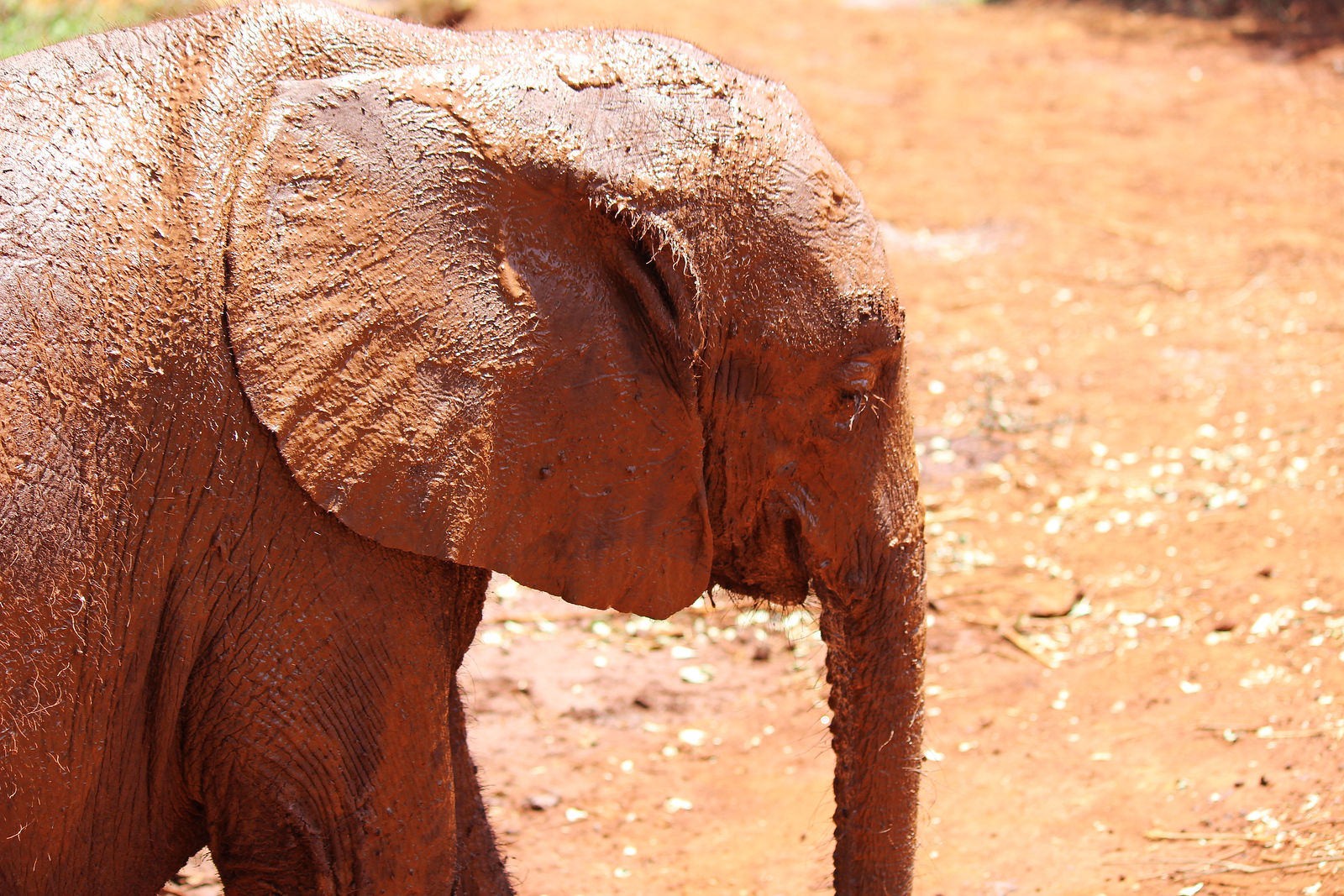 Would I recommend that you visit the Elephant Orphanage of the David Sheldrick Wildlife Trust? Absolutely I would! Not only are you supporting such an amazing organization and elephant sanctuary, but you get to see baby elephants up close. You’ll fall in love. I did! 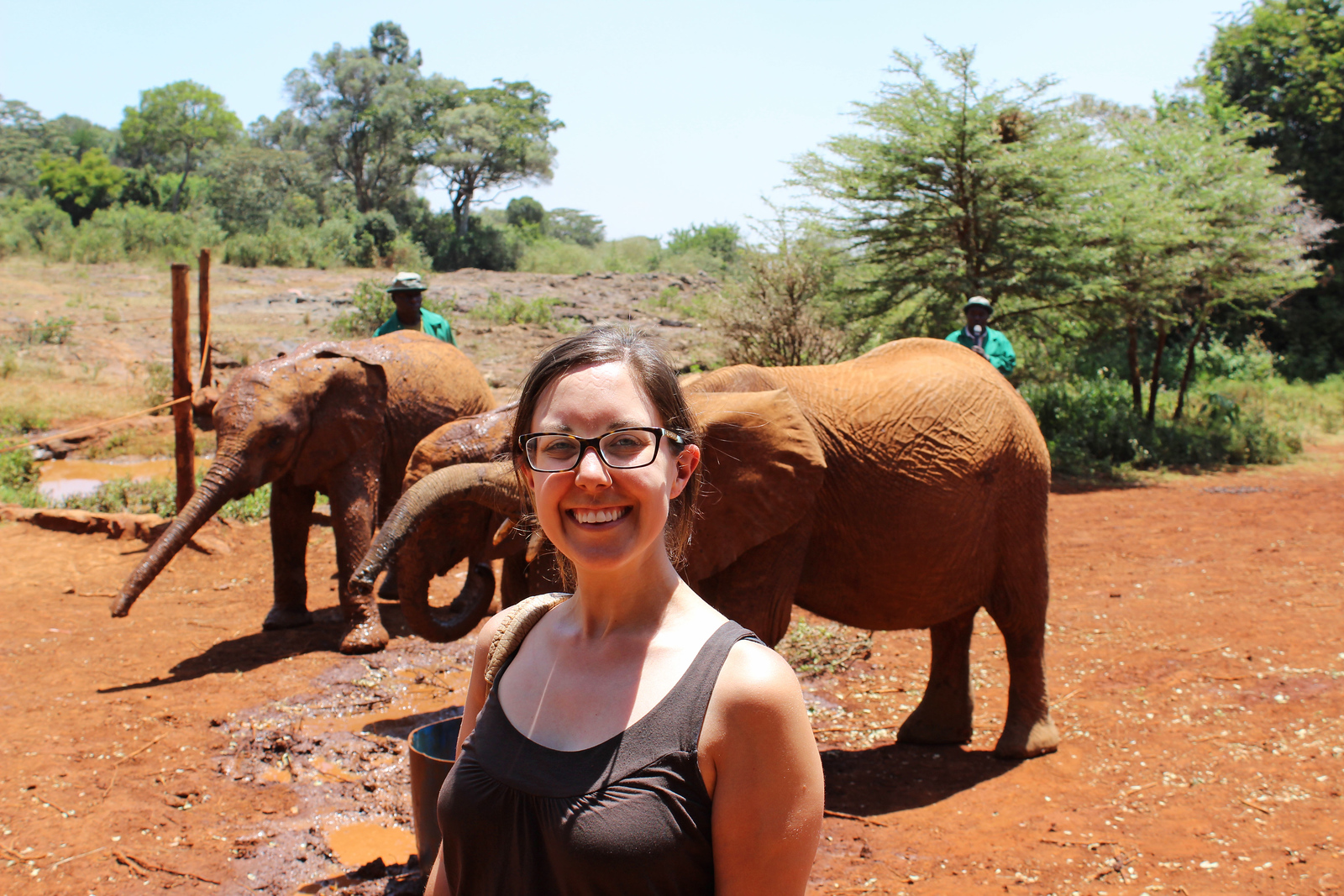 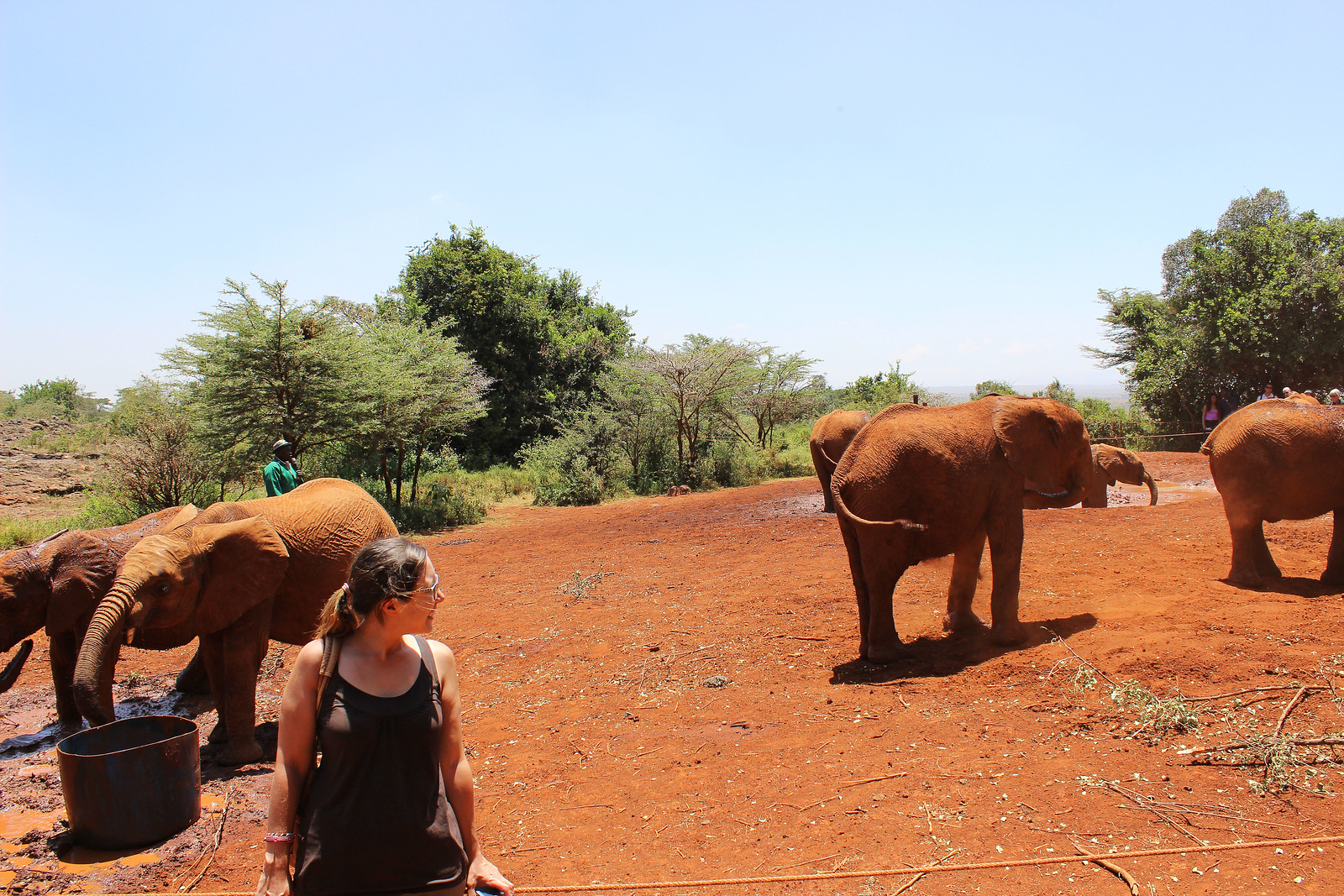 David Sheldrick Wildife Trust’s Elephant Orphanage is on the edge of Nairobi National Park. You can get there by car or taxi. 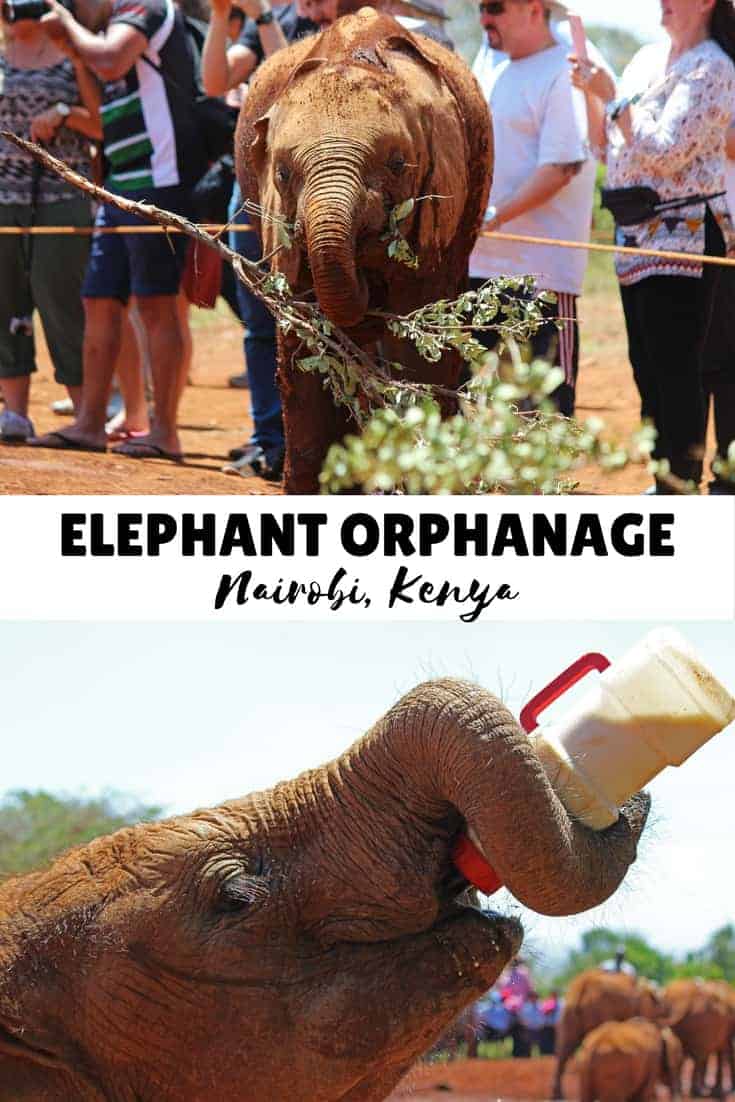 Have you ever visited an animal sanctuary or rehabilitation center? Tell me about it!

So adorable! With all of the controversy surrounding wildlife tourism, it is nice to see a place where the animals are visibly happy and unharmed and that people's visits actually support them to grow instead of keeping them drugged, beaten and chained up. Great pictures!!

Wow we are currently planning our trip to Kenya and this looks fantastic. I had no idea that an elephant orphanage existed here. Thank you for the insight!

What a great experience. How gorgeous are these creatures

Baby elephants are so cute ! Last year had a road and kayaking trip. I went there too and the experience was beyond words. I am glad people like you still think about these cute little souls. Thank you for sharing the link to adopt an elephant. I'll share it with the some people too.

I had no idea that such an orphanage existed in Kenya. Congratulations to that organization.