Quebec Winter Carnival: Behind the Scenes - Justin Plus Lauren Skip to Content

Quebec Winter Carnival: Behind the Scenes It was a rare opportunity to go behind the scenes at the Quebec Winter Carnival.

During a recent press trip, we got an exclusive behind the scenes look at the Quebec Winter Carnival. As you can imagine, there are preparations all year long for the biggest and most famous festival in the city. Today is the first day of the event this year! It runs from January 29th to February 14th, 2016. To celebrate the beginning of the Quebec Winter Carnival, we’re taking you on a tour to show you some of the planning that goes into putting on a festival of this size.

Our tour was led by the main mascot himself, Bonhomme Carnaval. He’s truly the face of the Winter Carnival. When you think about the festival, I’m sure that Bonhomme comes to mind. He was very jolly, funny, and a great guide. After all, who knows how to celebrate the winter better than Bonhomme?

If you haven’t heard of the Quebec Winter Carnival, you’re likely wondering…what is it, and who is this snowman? Well, this is an annual winter festival in Quebec City. It started back in 1894, and it’s happened every year consecutively since 1955. Bonhomme made his first appearance in 1955, and now he would never miss it. Over a million people attend the Winter Carnival, making it one of the biggest celebrations of winter in the world. The festival has something for people of all ages, with activities and events happening all day and night. Be sure to pack your winter gear and enjoy playing in the snow!

Here are a list of the activities that you don’t want to miss:

Essentially, if there’s a way to have fun in the wintertime, you’ll be able to find it at Carnaval de Québec!

As you can imagine, there’s a lot of work and magic at play behind the scenes at the Quebec Winter Carnival. From designing the parade floats to sewing all of the costumes, employees are hard at work even months ahead of the festival. All of these important components are constructed in a large warehouse space. It is truly a winter wonderland there, except it’s indoors and there isn’t any snow (unless you count the giant snowflakes on the walls). We walked from one space to the next, marveling at all of the detailed handiwork that goes into designing and creating each piece from scratch. 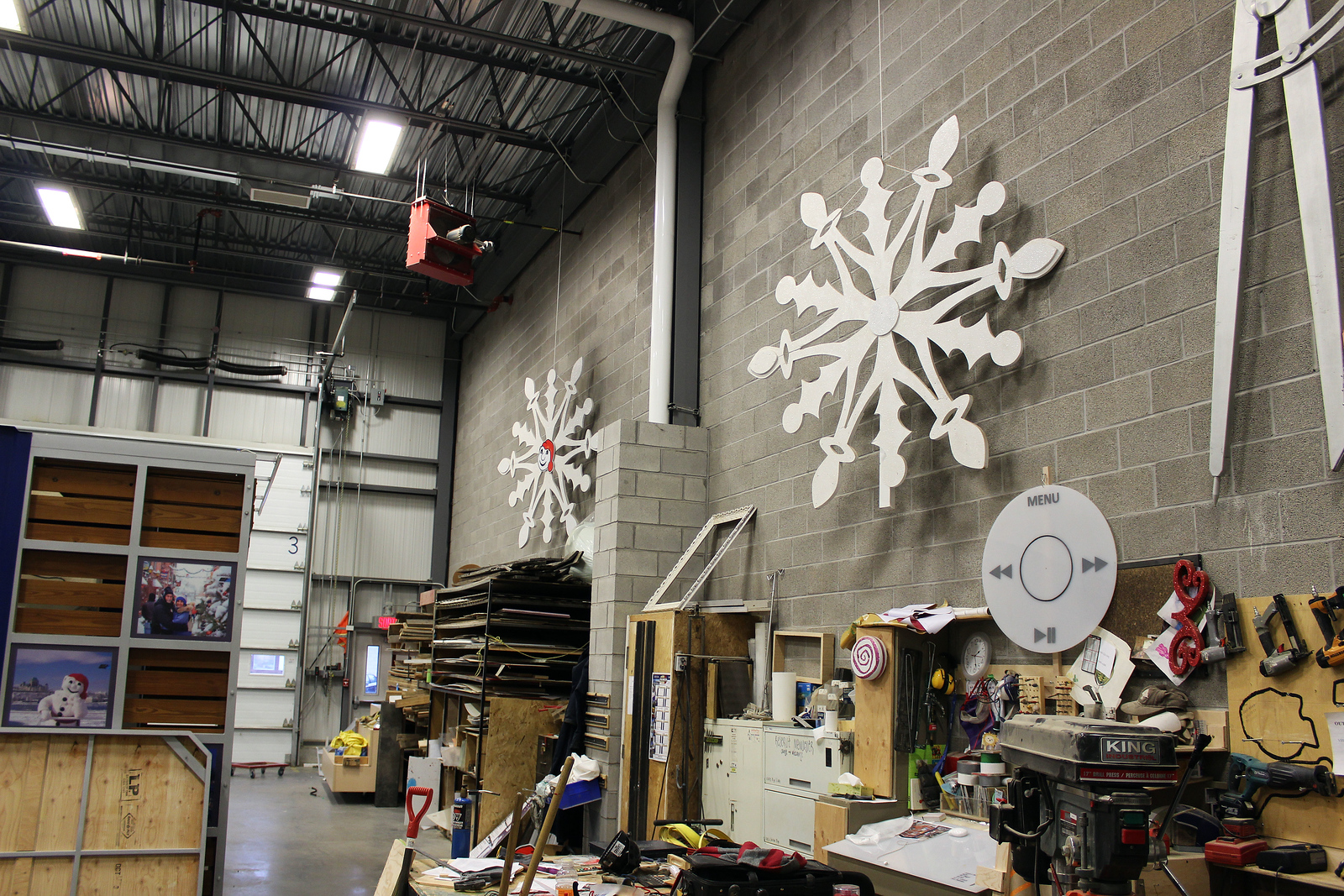 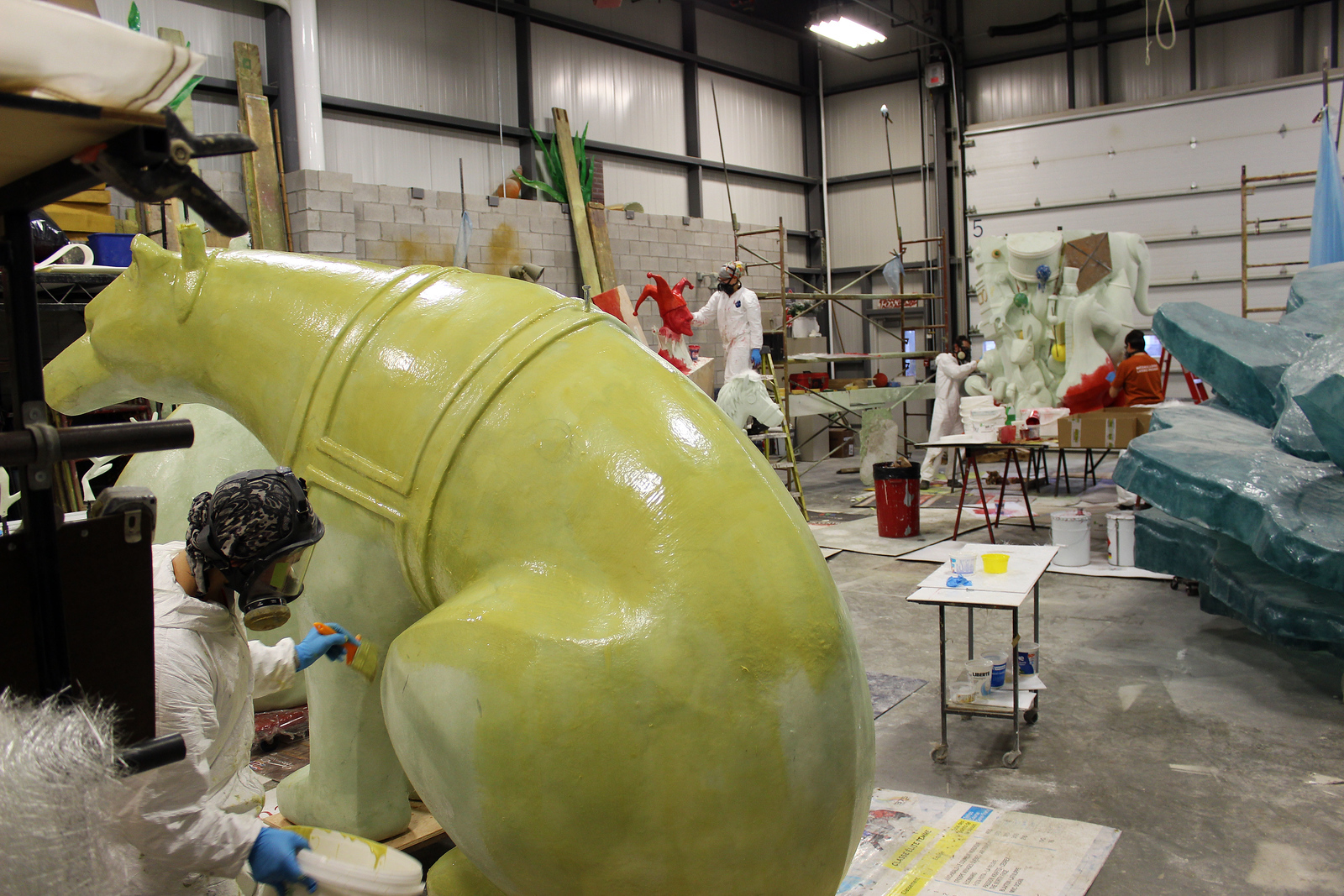 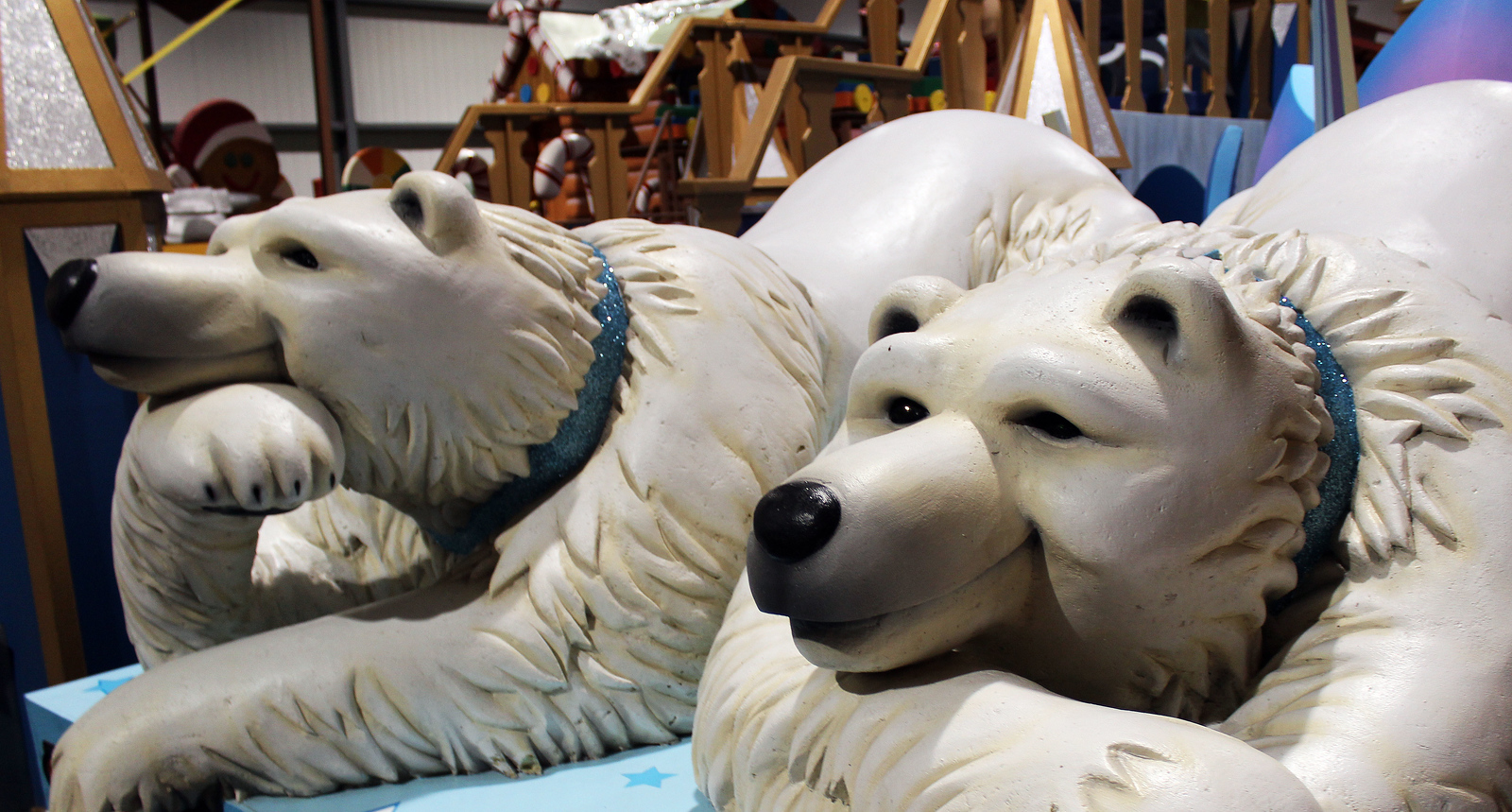 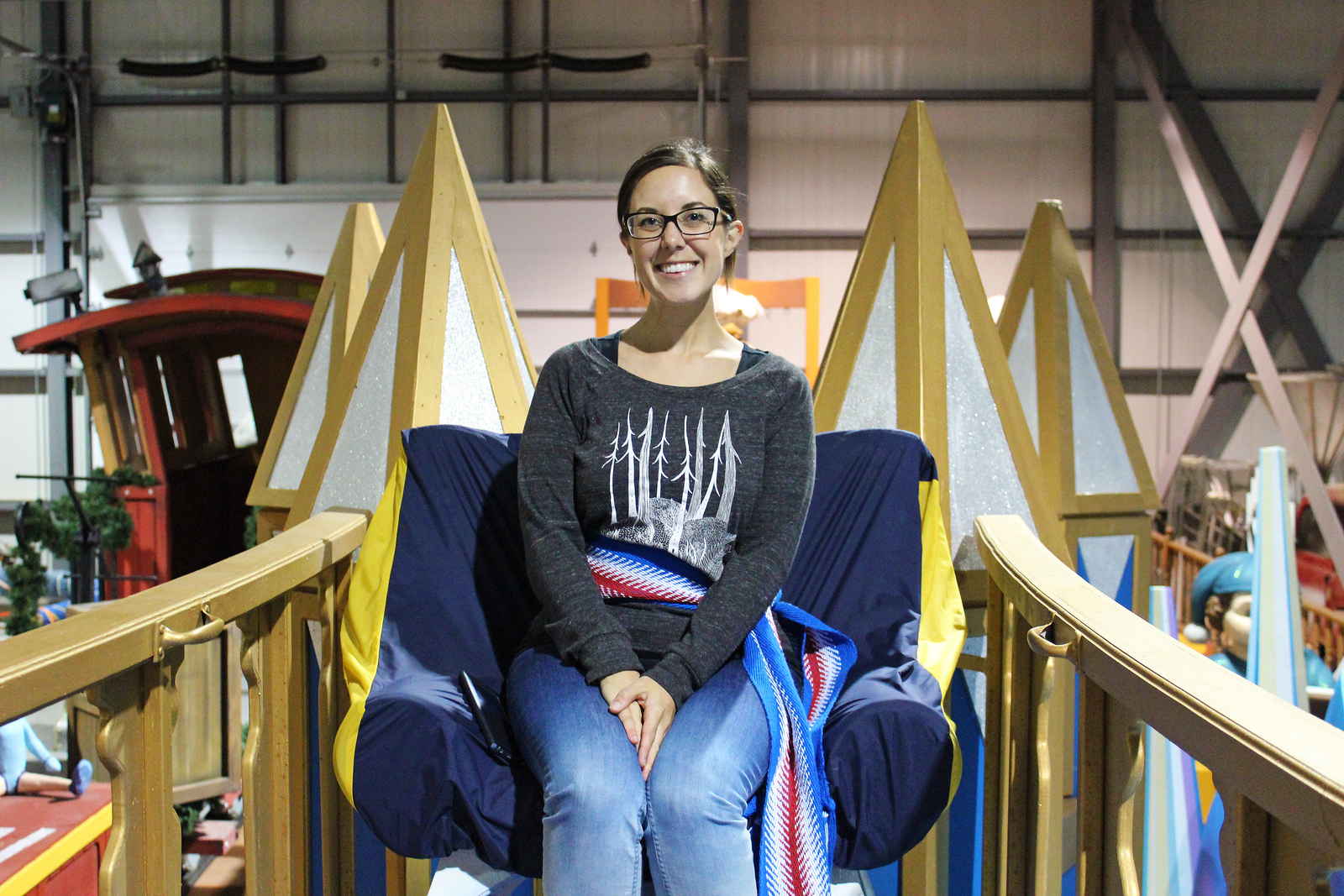 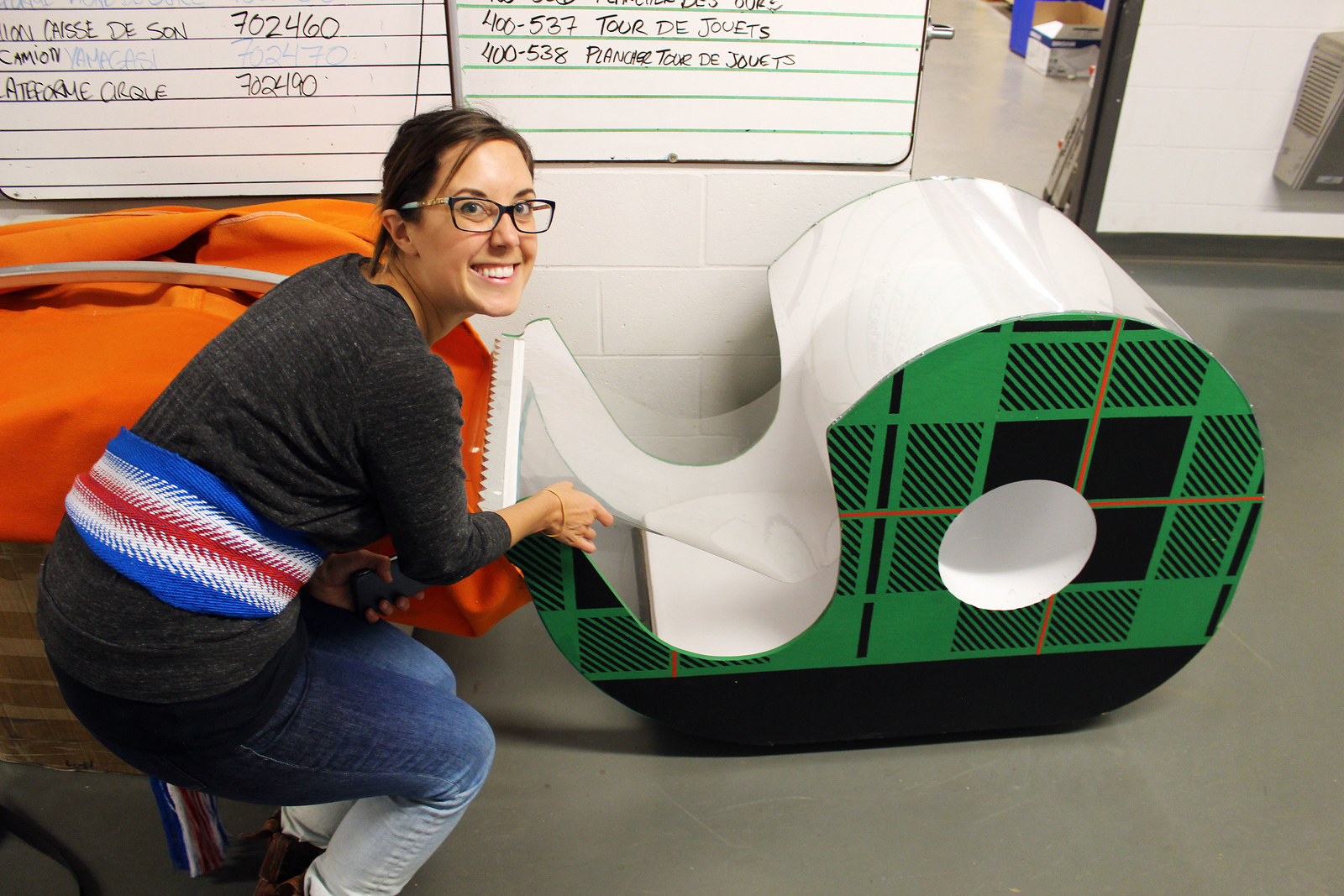 Bonhomme gave each of us a gift that happens to be a part of his costume: an arrowed sash. or ceinture fléchée. It’s the blue, white, and red sash around my waist in the photos. It is a traditional piece of 19th century French-Canadian clothing, originally borrowed from the indigenous peoples. It was typically used to fasten men’s jackets around their waists to keep the cold from entering. It was both practical and fashionable. Bonhomme famously sports the arrowed sash, and these are also sold at the Winter Carnival.

The Winter Carnival takes place in Quebec City from January 29th – February 14th, 2016. You can find all of the details at the official website. Have you ever been to the Quebec Winter Carnival?

We loved the winter carnival in Quebec! Have you ever seen the 'Bain de Neige'? Still don't know how those people dance around in swimwear when it's so cold!

It's great to get a behind the scenes tour of the Carnival. The Carnival certainly seems action-packed as well.

In the part of The Netherlands where I live there isn't any carnival. In Madrid, carnival is huge and also a lot of fun

That really looks like a fun behind-the-scenes tour. Quebec Winter Carnival sounds like so much fun, although I think I would skip the snowbath. I'd be particularly interested in seeing the snow sculptures and snow castle.

Oh my gosh - that is so cool! It's very similar to the goings on at Mardi Gras World before Carnival. Lots of work leads up to lots of fun, huh? Thanks for the peek behind the scenes! #WeekendWanderlust