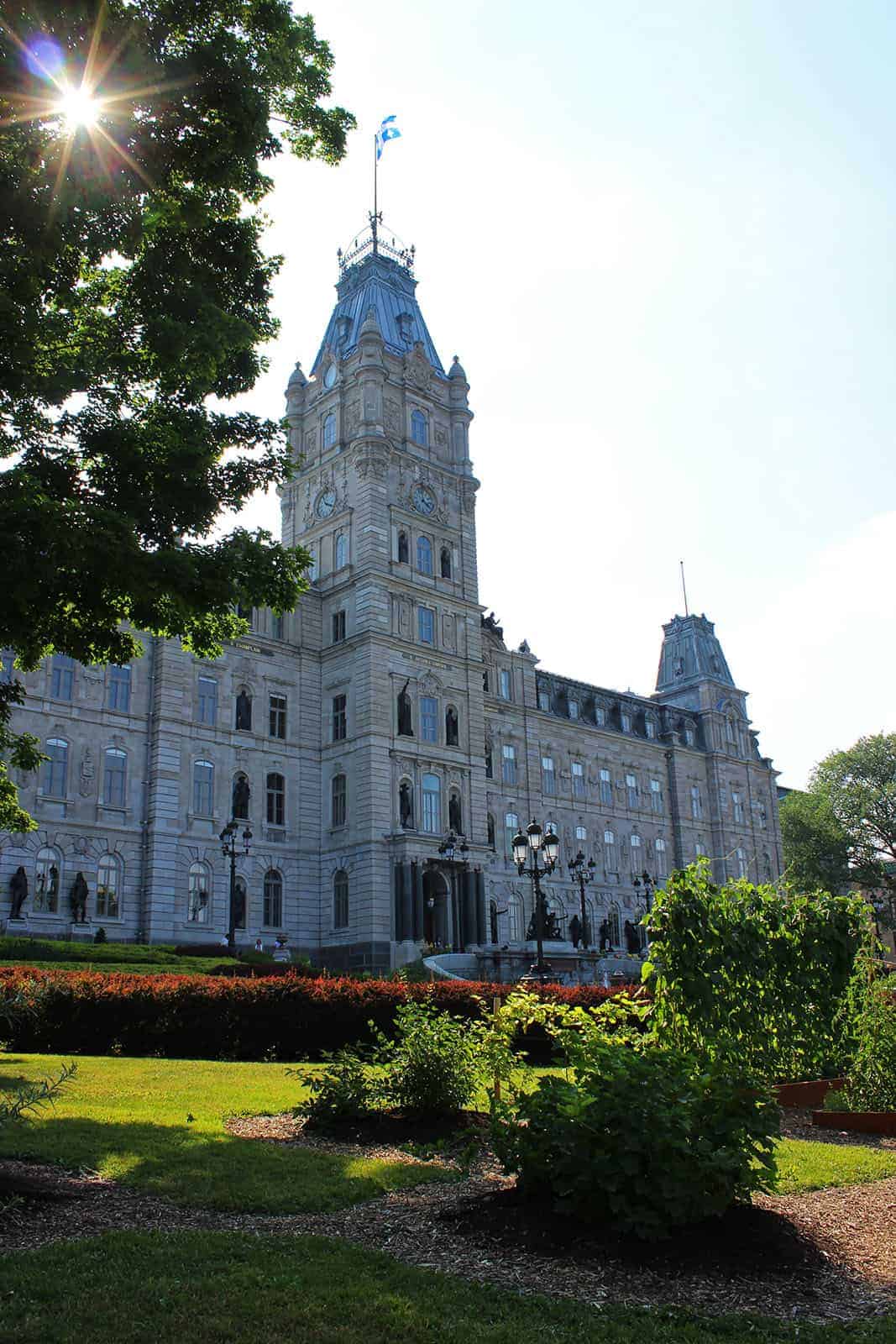 Quebec City is the type of place where you can walk around everywhere and stumble upon new spots to explore. After visiting the Observatoire de la Capitale, we were walking down Grande Allée and found the Parliament Building in Quebec City. This majestic, historic building is definitely worth a visit, plus there are some beautiful gardens there, too! 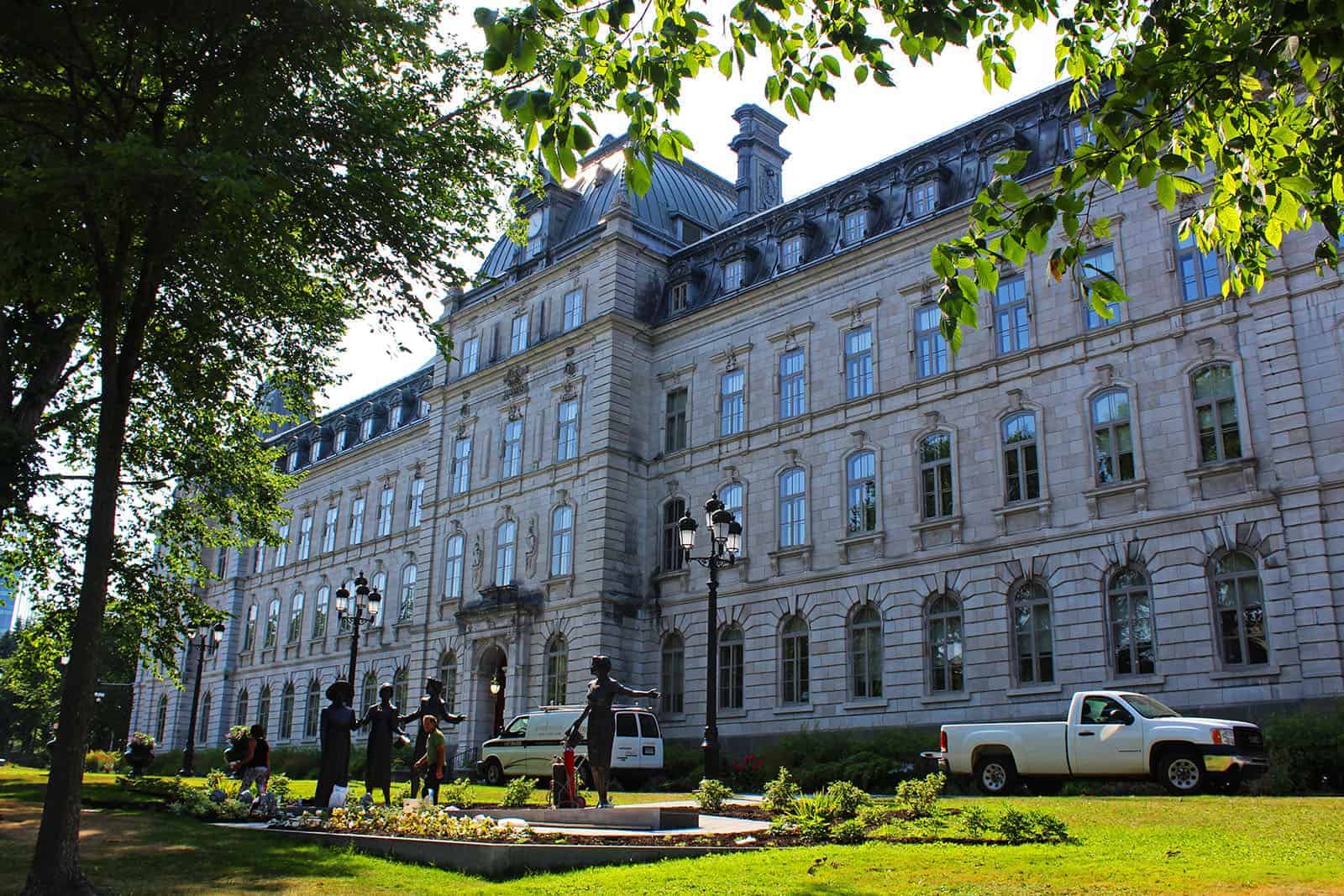 Along one side of the building, there was a monument dedicated to women in politics, created by sculptor, Jules Lasalle. The monument contains four statues of women who played a lead role in demanding and obtaining the right for women to vote in Quebec. We noticed many statues around the building that honoured important people in Quebec’s history. 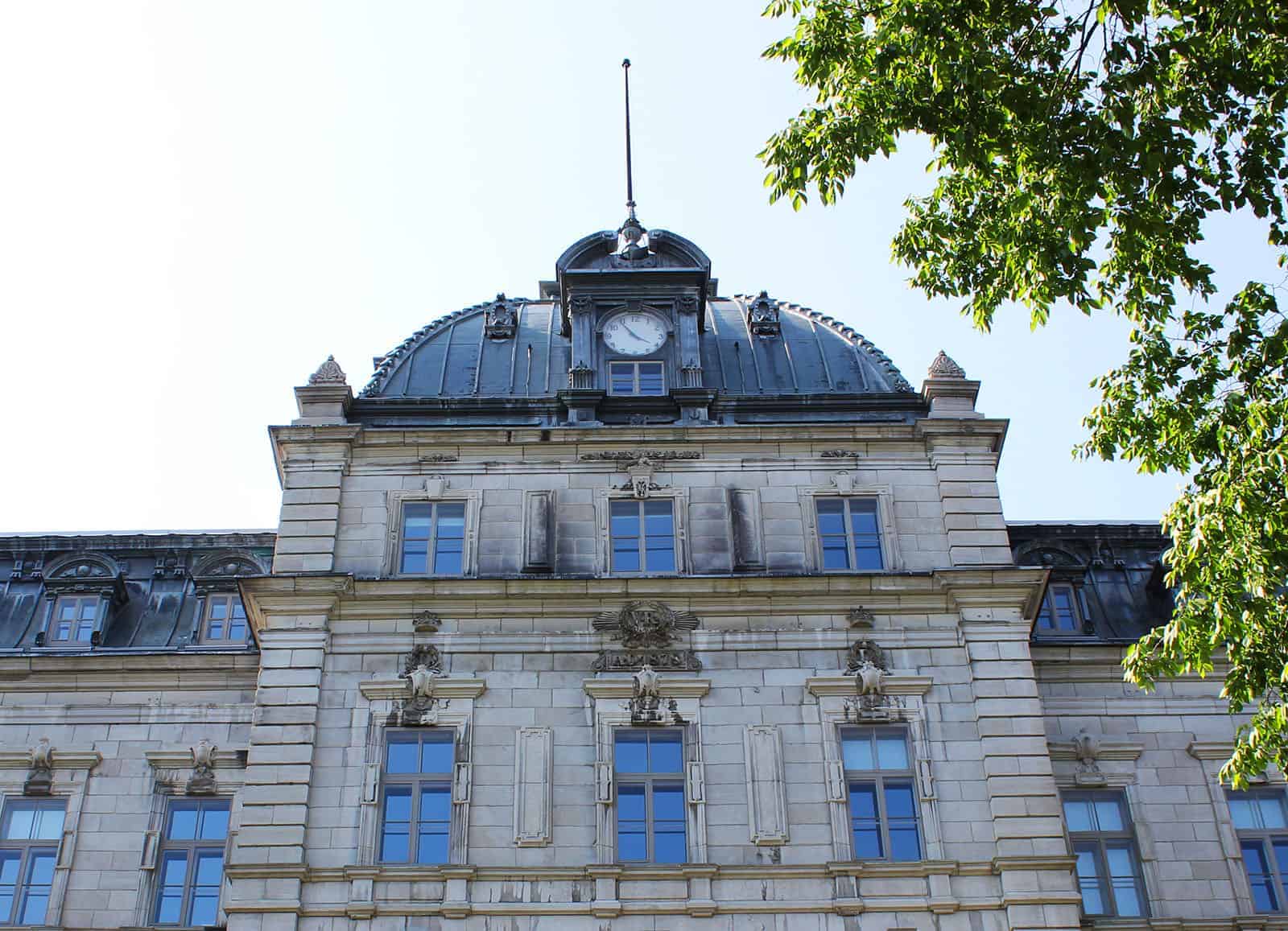 The Parliament Building (in French, Hôtel du Parlement) is an eight storey building built from 1877 to 1886. It is home to the Parliament of Quebec, which is comprised of the National Assembly and the Lieutenant-Governor. It was one of the few buildings in North America to be constructed in the Second Empire architectural style, providing it with a rather prestigious flair. The building has four separate wings to form a square approximately 100 metres on each side. It was inspired by the expansion of the Louvre in Paris, and was designated a Quebec national historic monument in 1985. There are tours given daily of the building’s interior, which we didn’t do (maybe next time!), and there are more details about this on the official website. There are 26 different bronze statues on the building’s facade, dedicated to important men and women who helped to shape society in Quebec.  It was really interesting to see statues like this built right into spaces on the building itself – I’m not sure that I’ve ever seen something like it before! 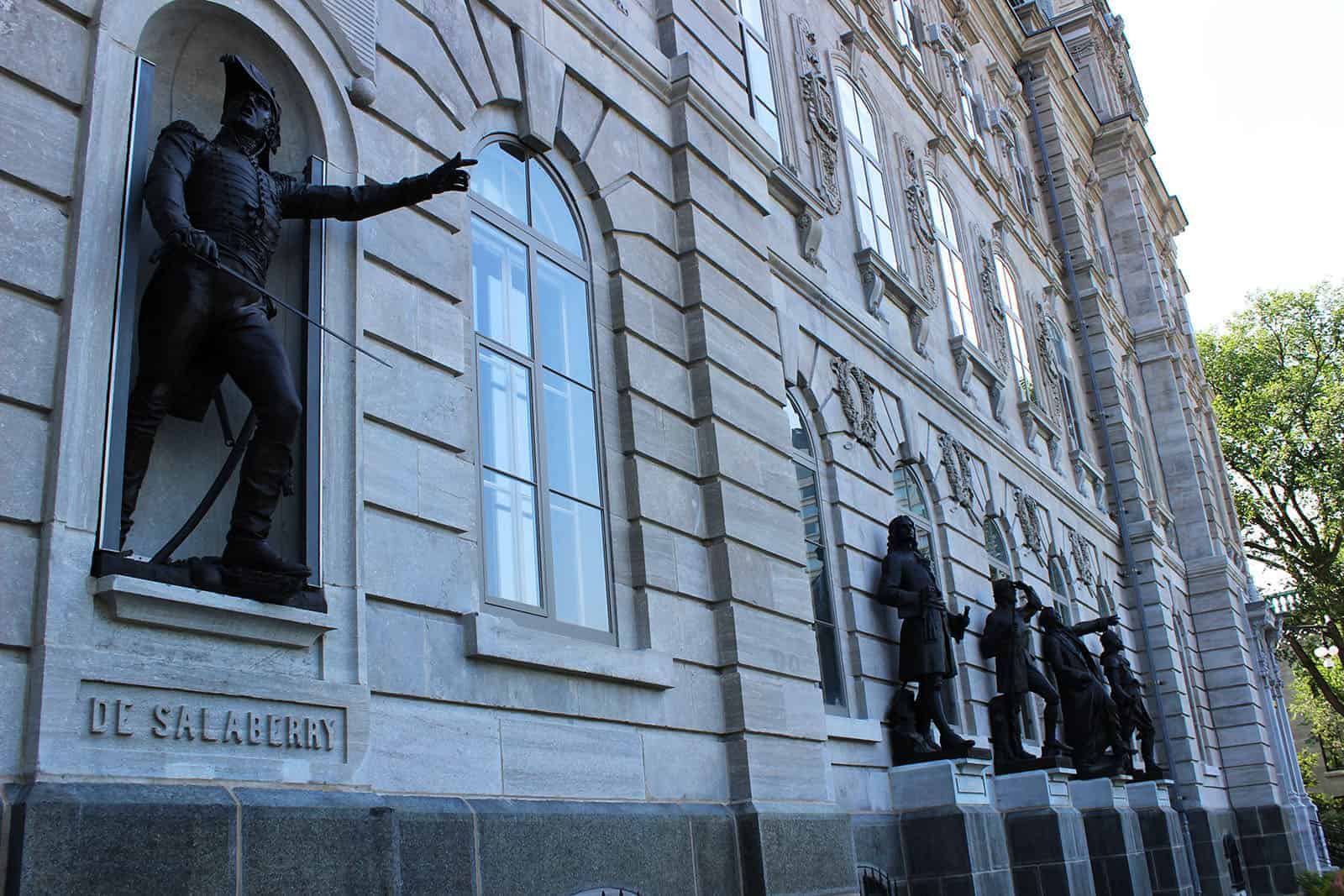 Small fountain at the front entrance 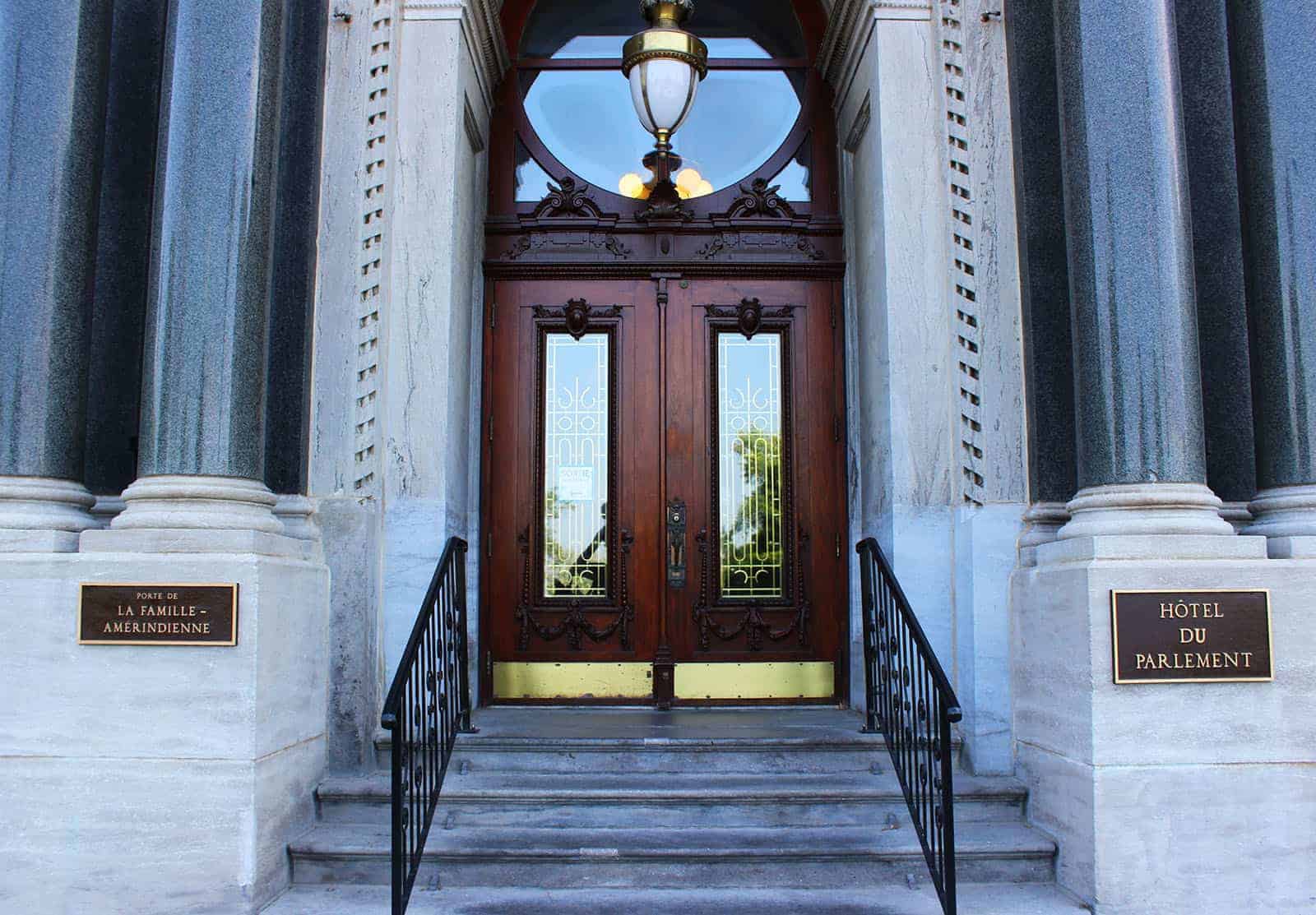 While the Parliament Building itself was grandiose and spectacular, I really enjoyed wandering around the property’s gardens. There are many species of trees, plants, shrubs, and flowers that are all native to Quebec. I loved how there was an edible garden growing on the site, which was home to over 130 different kinds of vegetables, fruits, and herbs. The harvest from the edible garden is donated to a local charity group. 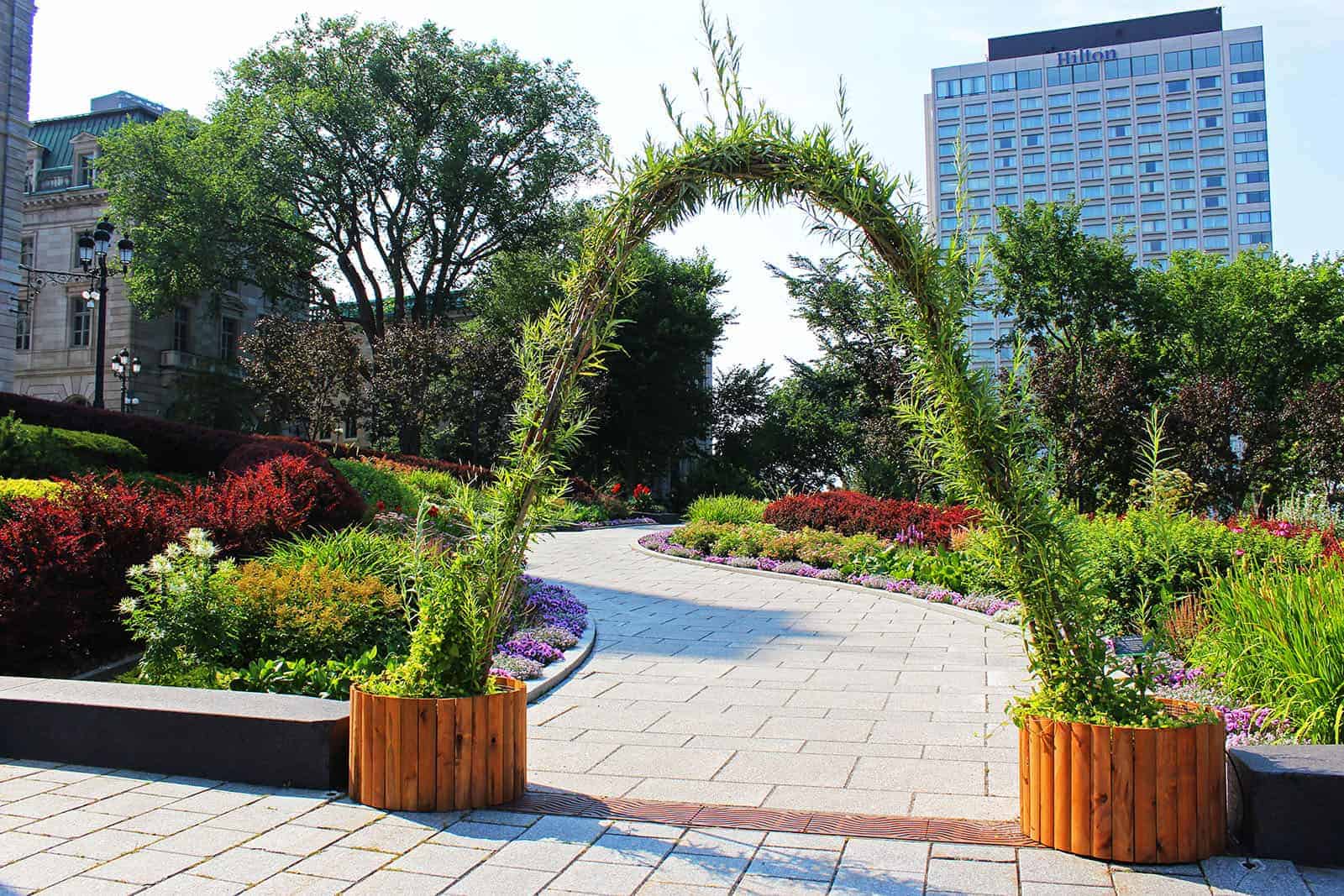 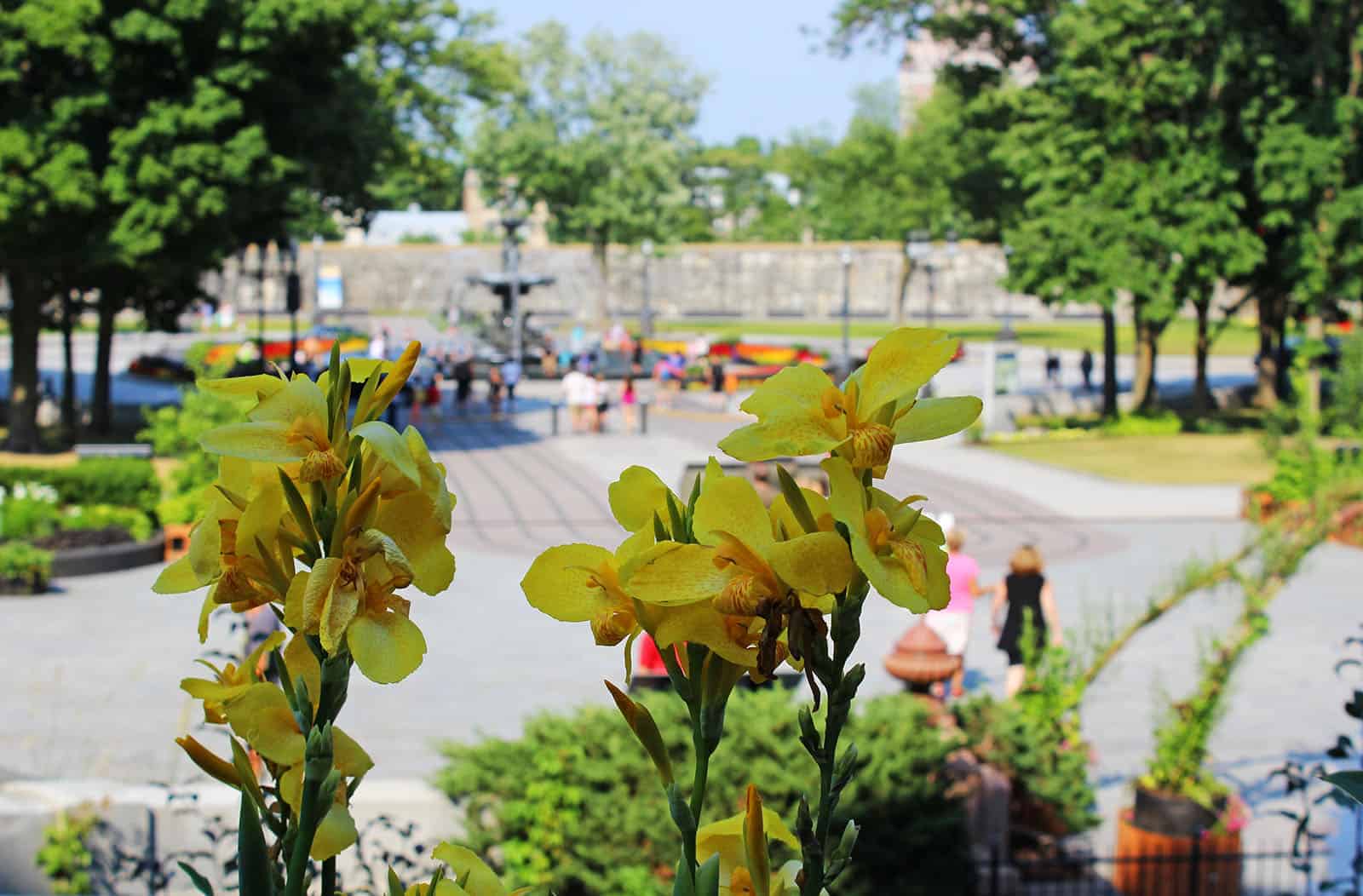 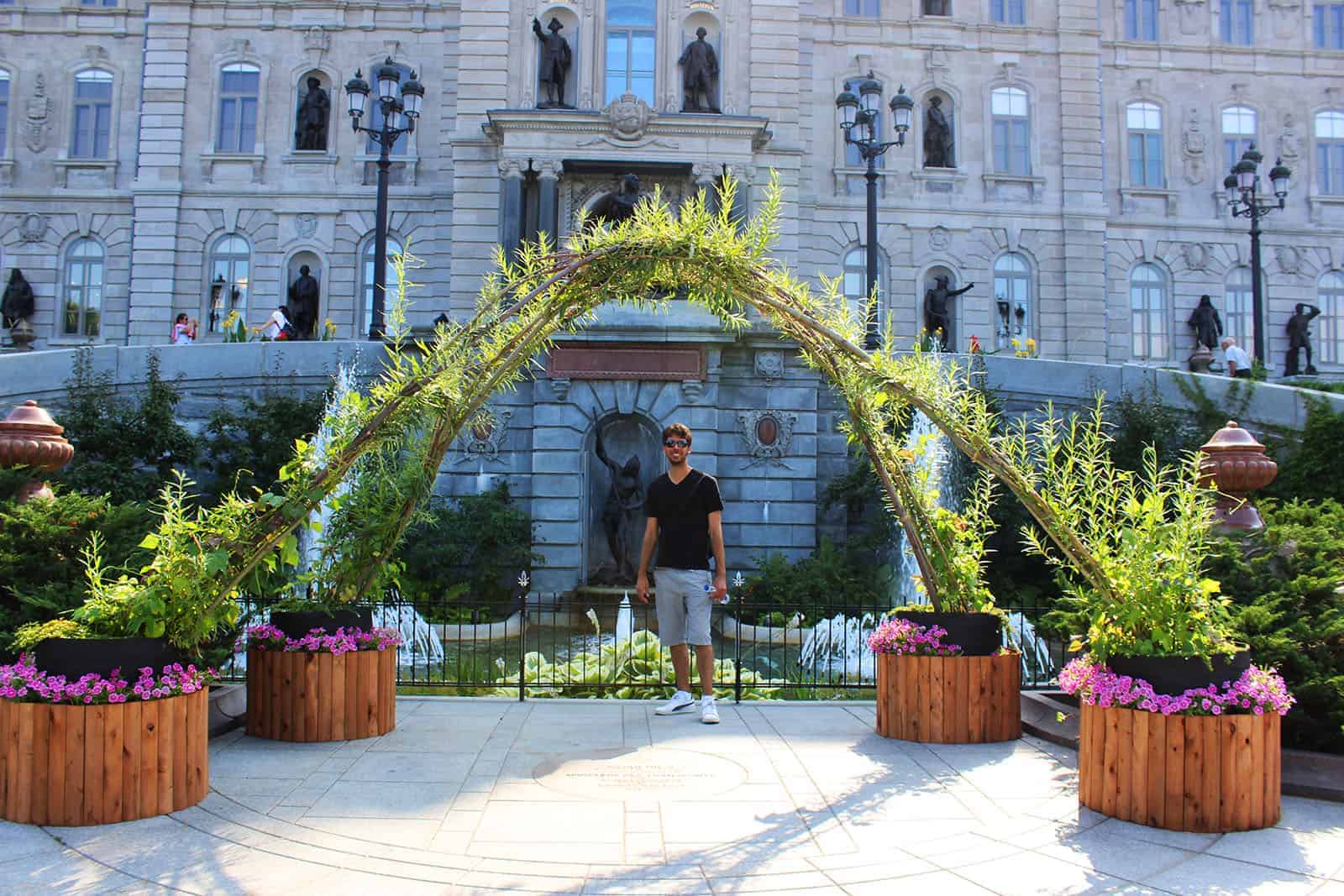 In the centre of Avenue Honoré-Mercier, directly across from the Parliament Building, stands the Tourny Fountain. It was a gift to the City of Quebec from La Maison Simons, a local family-owned retail store. There were so many brightly coloured flowers all around the fountain, making it quite the sight to behold! 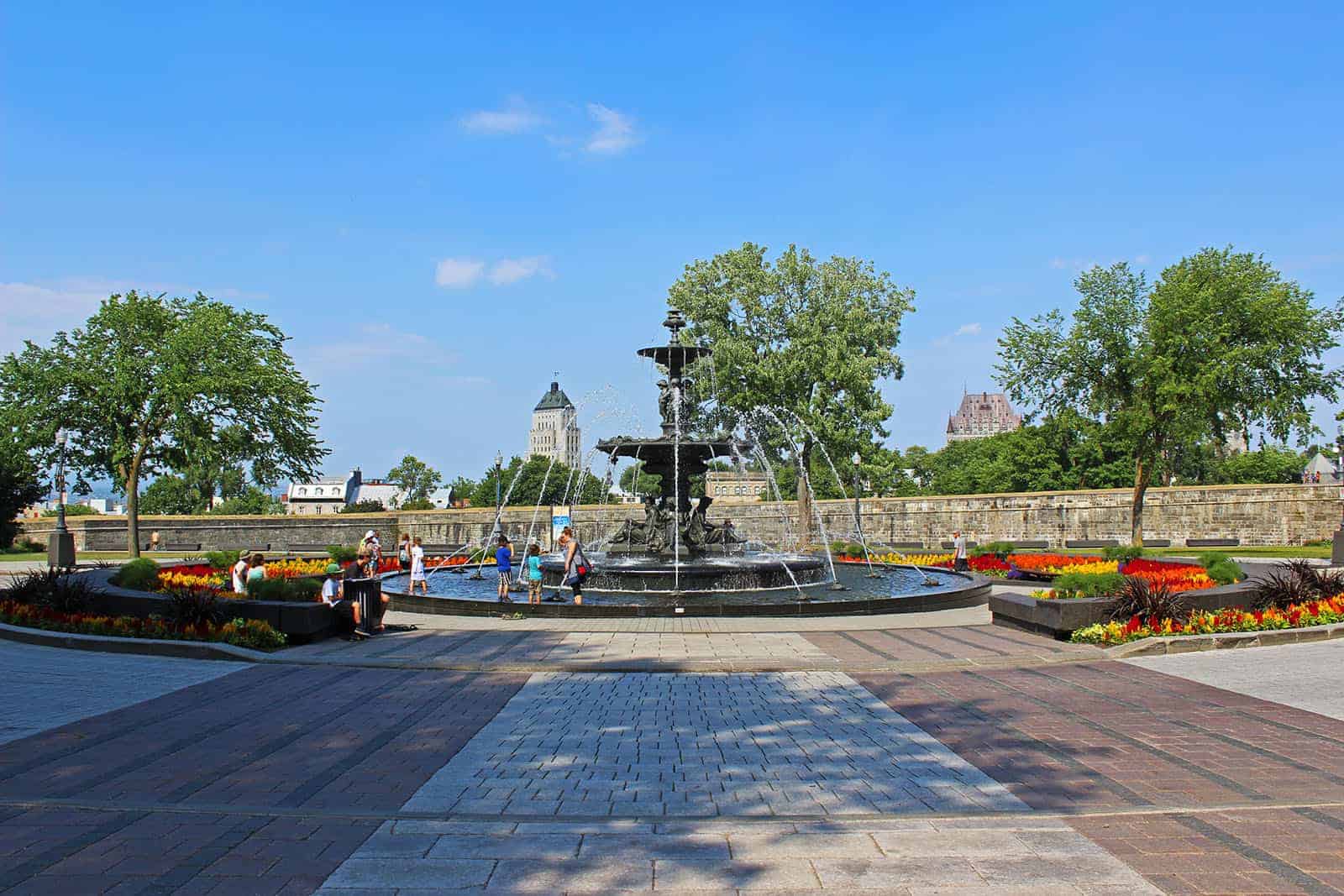 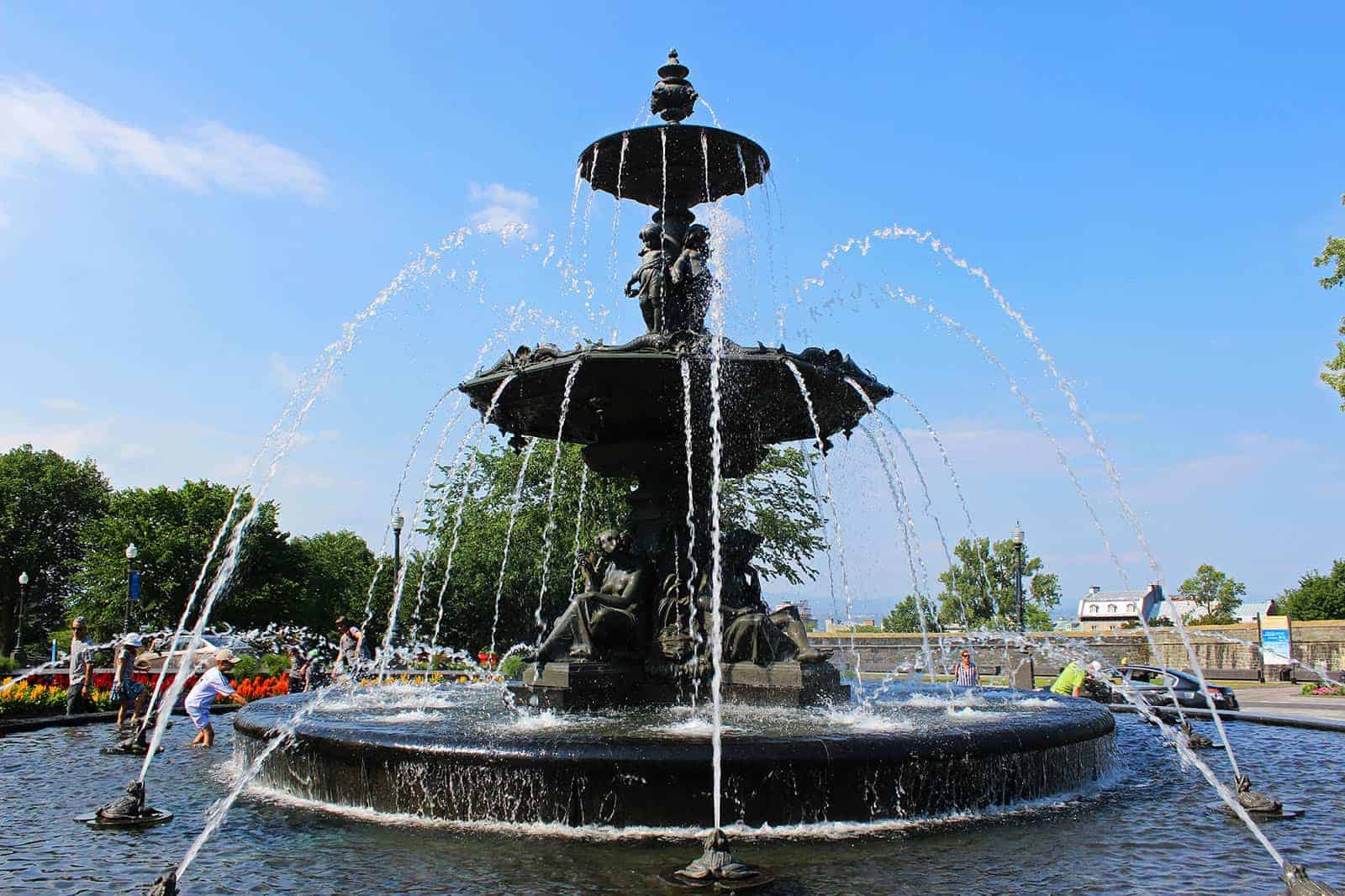 I highly recommend walking around the property of the Parliament Building, or perhaps taking an official tour indoors if you get the chance. Guided tours are offered in French, English, as well as Spanish and Italian upon reservation. Admission is free!

Have you visited a memorable political building?

This blog post is part of the Sunday Traveler series. Please check out PackMeTo’s article, Highlights from Roadtripping through Oregon, to link up this week!

How beautiful! It looks like some parliament buildings here in Melbourne, but the gardens are much nicer. :) Very cool that there is an edible garden too.

Ooh, nice to know these kinds of buildings exist in Melbourne, too!

What a building! It looks like a Parisian hotel or even an exterior of a fancy museum. I like how they pay homage by using those bronze statues. Beautiful photos especially of the gardens.

It is really fancy, isn't it! And the statues are incredibly unique. Quebec City loves its statues - statues were all over the place!

I LOVE the Parliament buildings in Quebec and your photographs are just stunning. I don't know why I never took a stroll through the gardens when I visited but one of the incredible things about Quebec in the summer is the amount of greenery that appears after the spring. Beautiful post.

Thank you so much! The gardens there were wonderful, and nice to see so much greenery and things growing there! I love community gardens, too!

What colours! Its so great when nature and urban settings can blend. Big thanks for linking up with us for #SundayTraveler again.

It was great to see a splash of color in the flowers amongst the architecture!