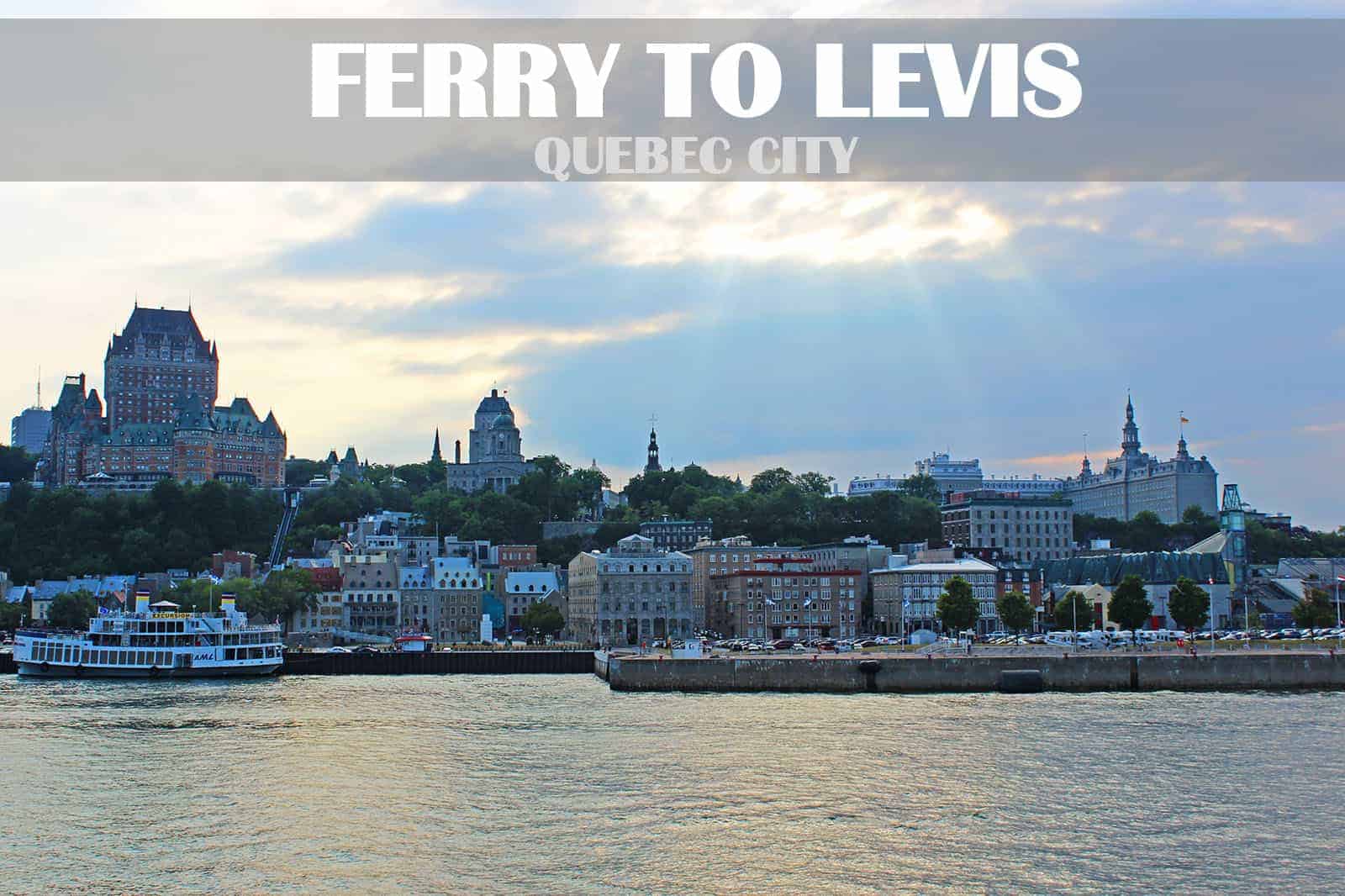 If you’re looking for a fun and inexpensive activity in Quebec City, look no further: the Quebec-Lévis Ferry might be exactly what you’re looking for. In preparing for our vacation, I discovered that many people liked to ride the Quebec ferry to Levis across the St. Lawrence River. And they didn’t ride the ferry with the intention of actually going to Lévis; they merely wanted to enjoy the views of Quebec City from the water. It sounded like a fun idea, so we decided to give it a try! 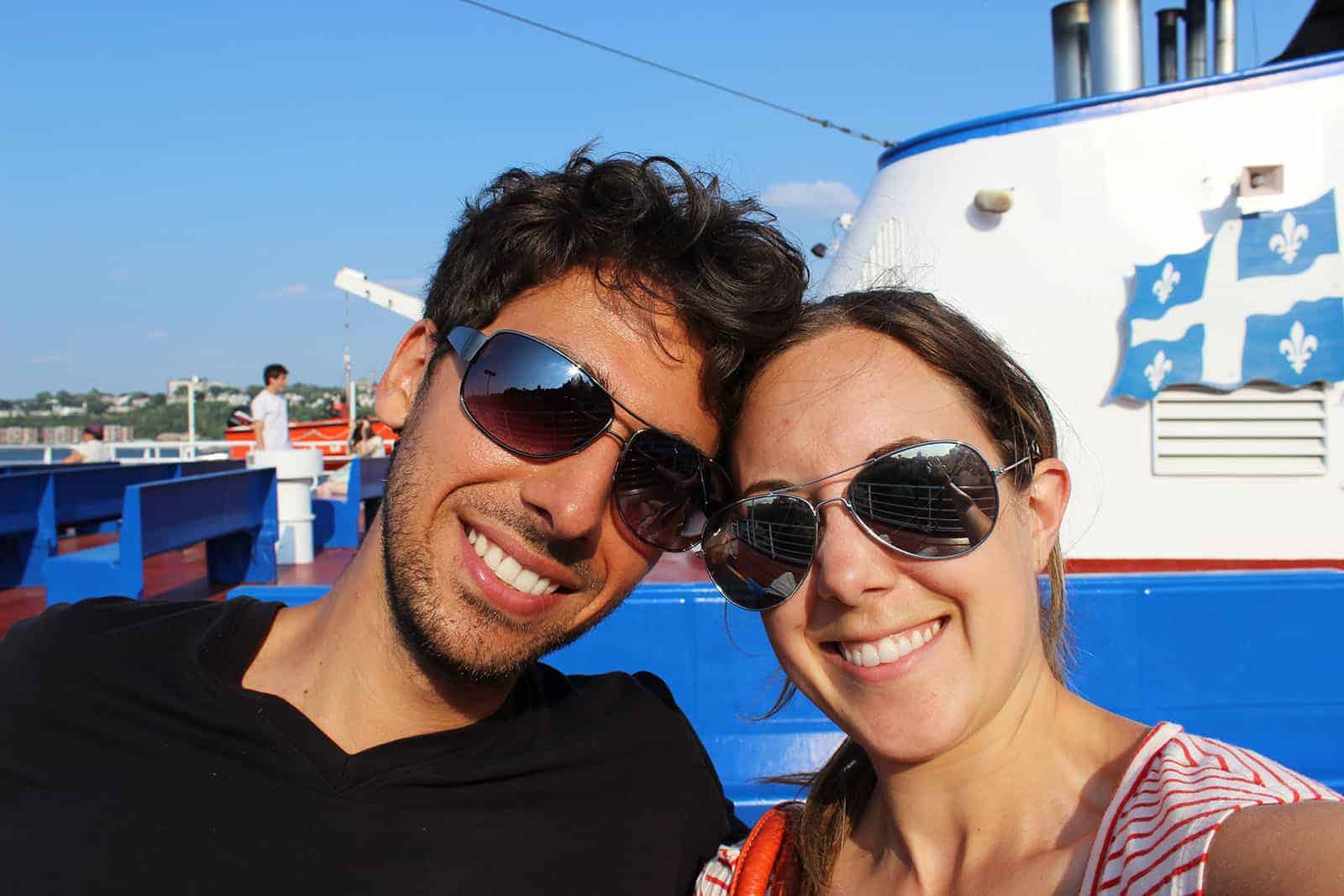 Justin and I boarded the ferry in the early evening with the hopes of catching the sunset while our ferry boat was out on the water. We were a little bit early for it; however, I think it was a little too cloudy that day for a spectacular sunset. There are two levels to the ferry, so we grabbed some seats on the upper level facing the Old Quebec City skyline as our boat motored through the water across the river.

It was incredibly relaxing to sit and enjoy the views after a lengthy day of walking all over the city. There was a calming breeze off the water as we sailed away from Quebec City. I took many photos, but they didn’t turn out as clearly as I would have liked. It seemed as though the direction of the sun provided fantastic lighting for the Lévis side as the sun was behind us for those pictures, but proved to be troublesome when it came to Quebec since the sun was directly in front of us. I managed to get a few good photos. Keeping this in mind, you may want to try riding the ferry at sunrise to get the best photos of Old Quebec. If you’re not an early-riser, have no fear – we really enjoyed the scenery at this time of day! I can imagine that the ferry ride would be excellent at all times of the day (including nighttime with everything all lit up!) and during all seasons of the year. I can only imagine how beautiful it would look with the leaves changing colour in the Fall, or the snow-covered hills during the Winter.

We got to see a different view of the Governor’s Promenade from the water, which we had walked earlier that day. 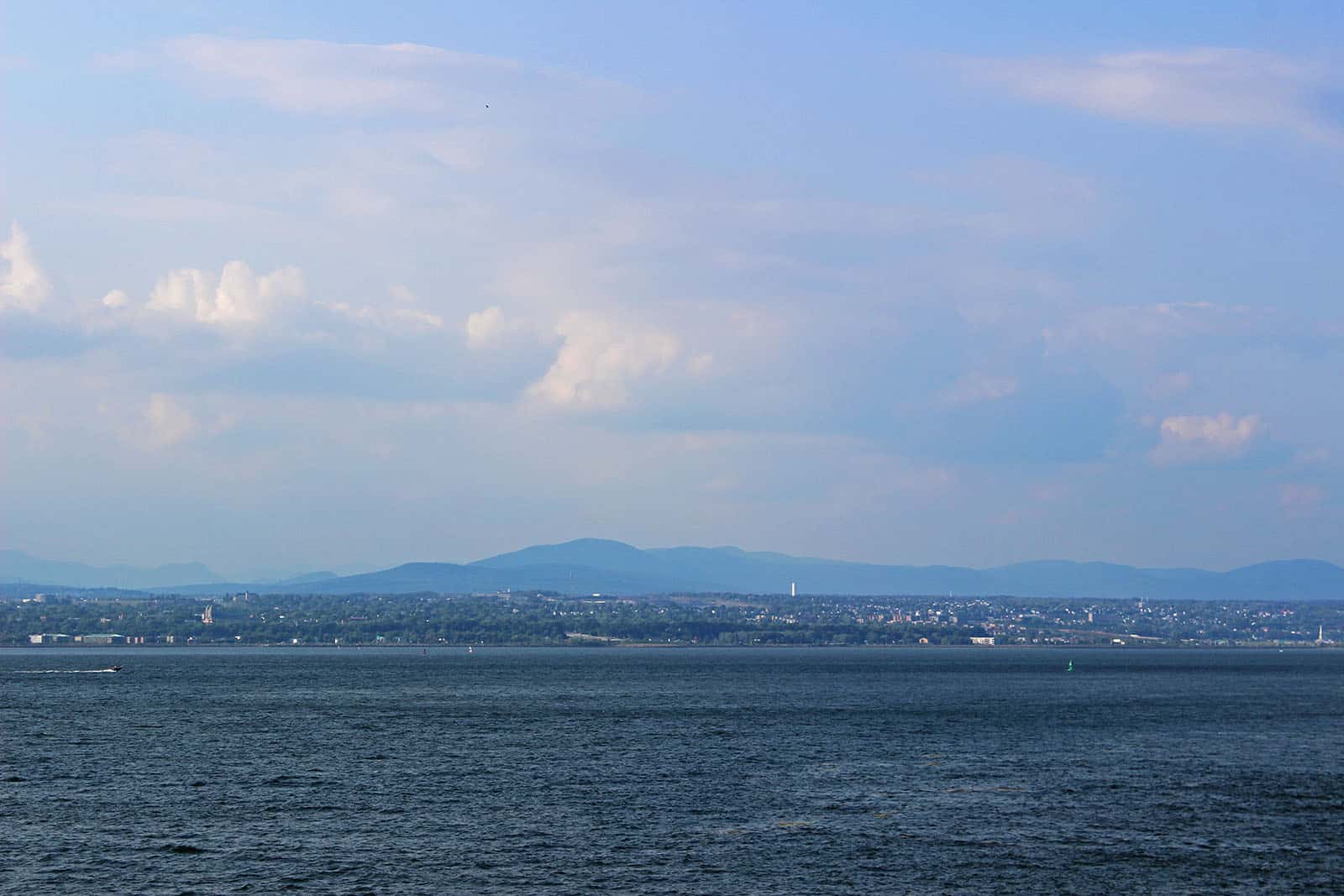 The views beyond Quebec and Lévis up the St. Lawrence River were really nice, too. We could see mountains off in the distance where I’m sure that people love to ski in the Winter. 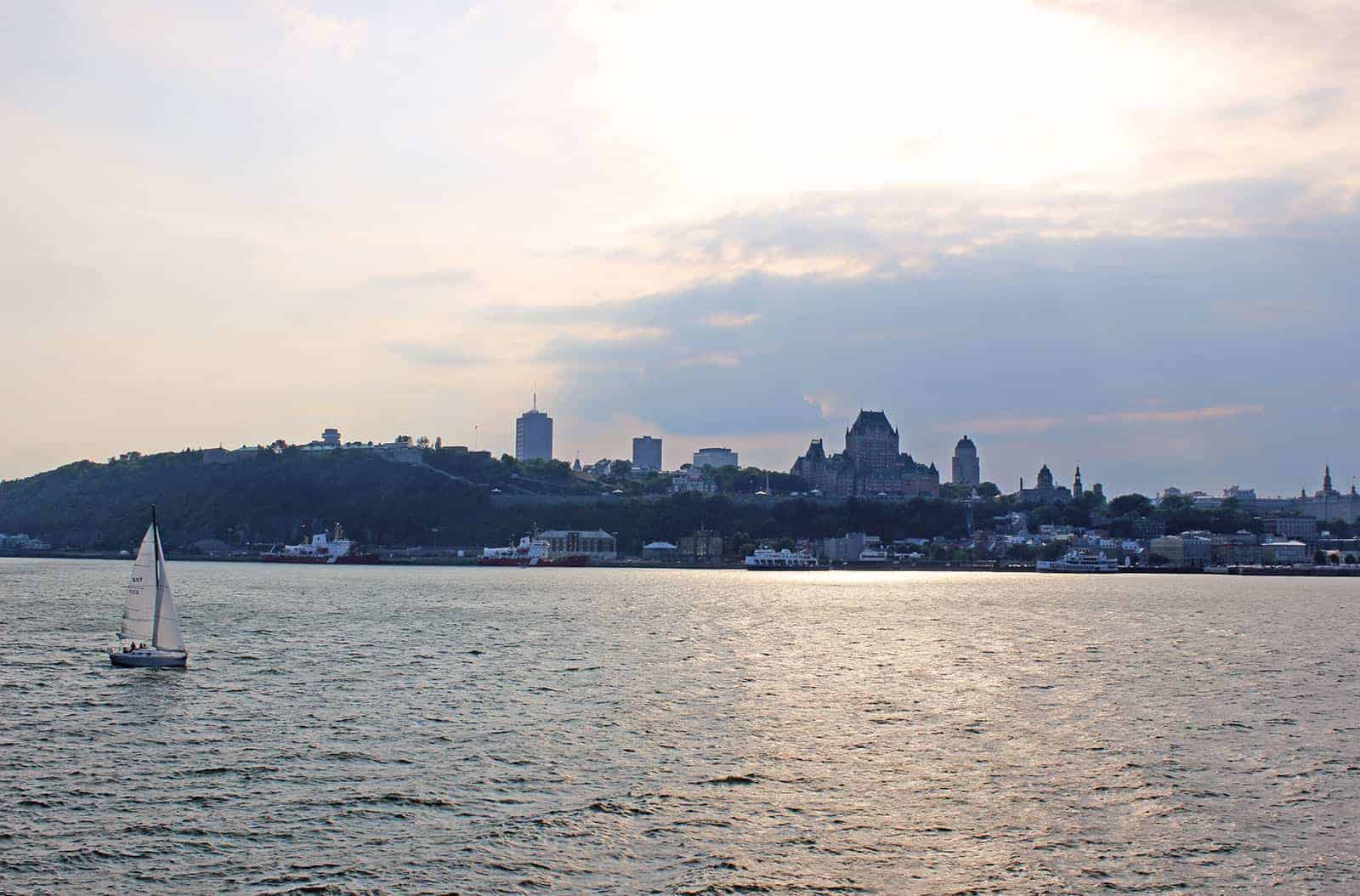 It was really lovely to see the entire city from a distance like this. Of course, Chateau Frontenac remained at the forefront – such a beautiful, historic building that is thought to be the “most photographed hotel in the world”.

After about 15-20 minutes on the ferry, we reached the island of Lévis. All of the passengers got off the boat and we stayed on, as we wished to travel directly back to Quebec City. Or, we thought that we could stay on to go straight back to Quebec. An employee of the ferry approached us, and he seemed very confused as to why we didn’t exit the ship. We were surprised as we didn’t think that we had to leave if we were going right back again. After the man attempted a couple of times to explain this to us in broken English, we finally understood what he meant and we departed, chuckling to ourselves about the slightly confusing situation. We immediately re-boarded the same ferry without any issues. 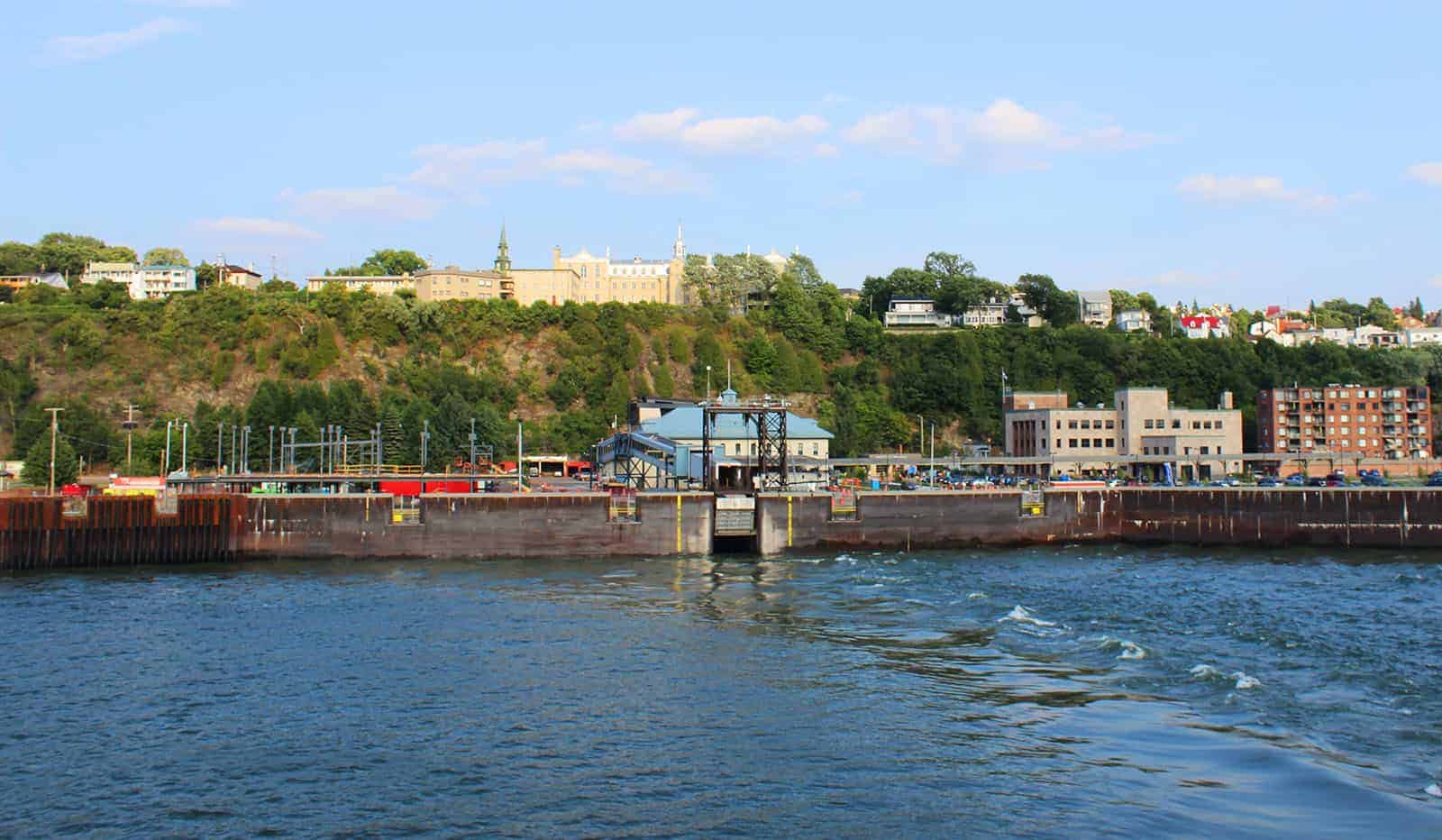 We made our return to Quebec City and enjoyed more fantastic views of the skyline as we approached the mainland. The ferry schedule for the Quebec-Lévis Ferry is available online, and a new ferry arrives every twenty minutes so you’ll have no problem catching one. In fact, the ferries run quite early in the morning and keep going until late at night. And the best part is the price: only $3.35 per person for one way! For under $7, you can view this beautiful city from the water on a boat ride – you really can’t beat it! There are discounts for younger people and senior citizens, too. 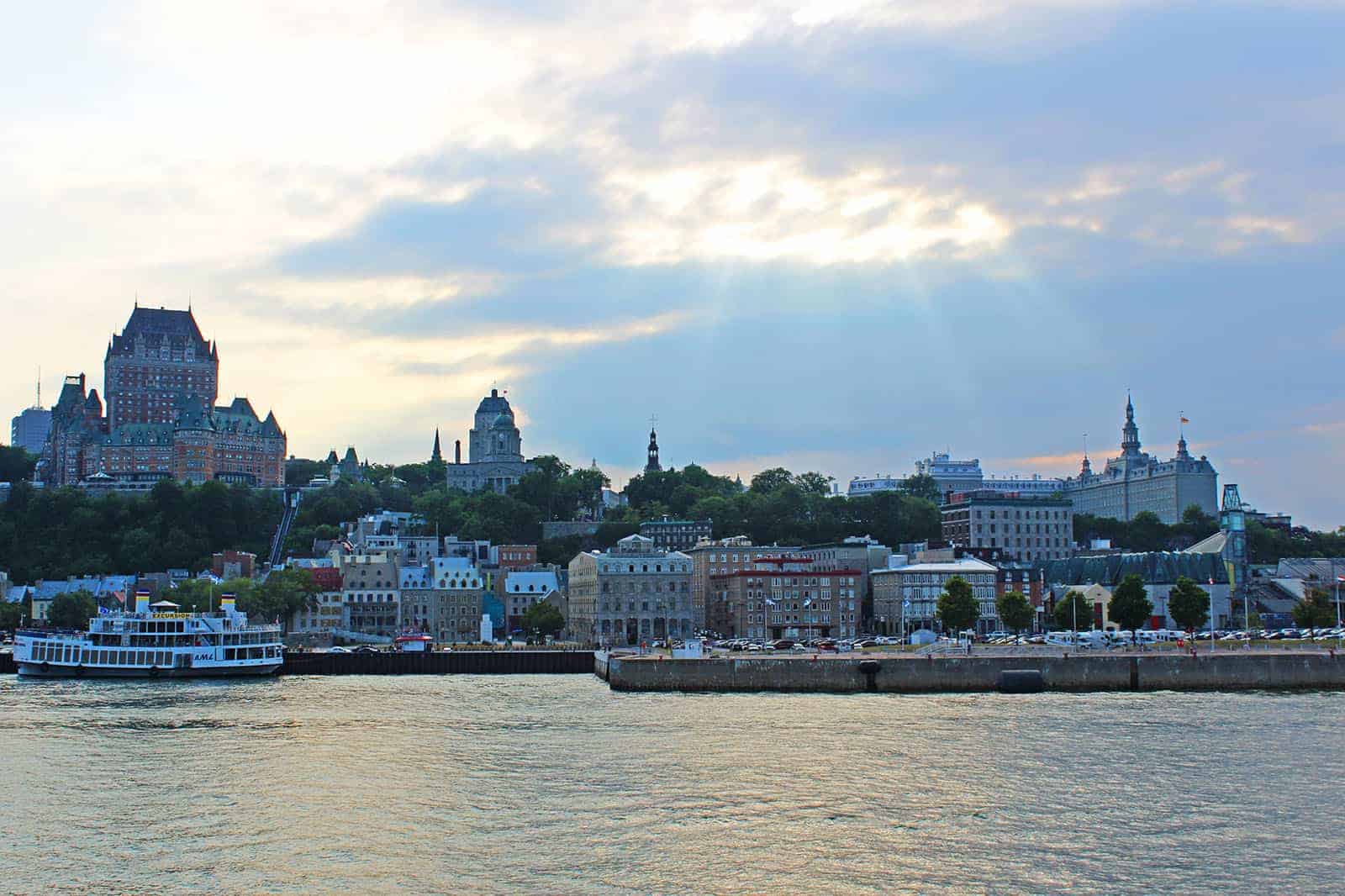 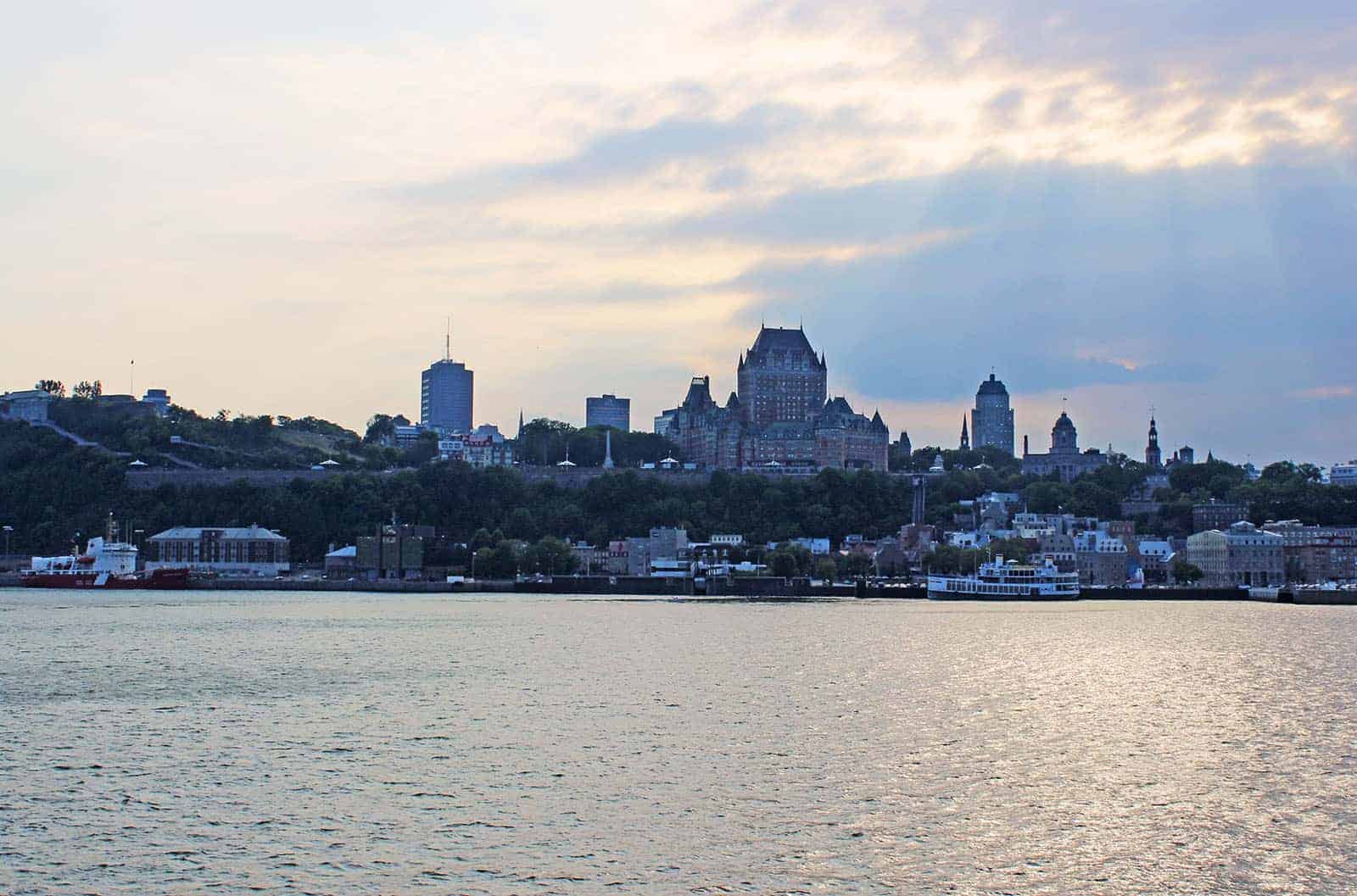 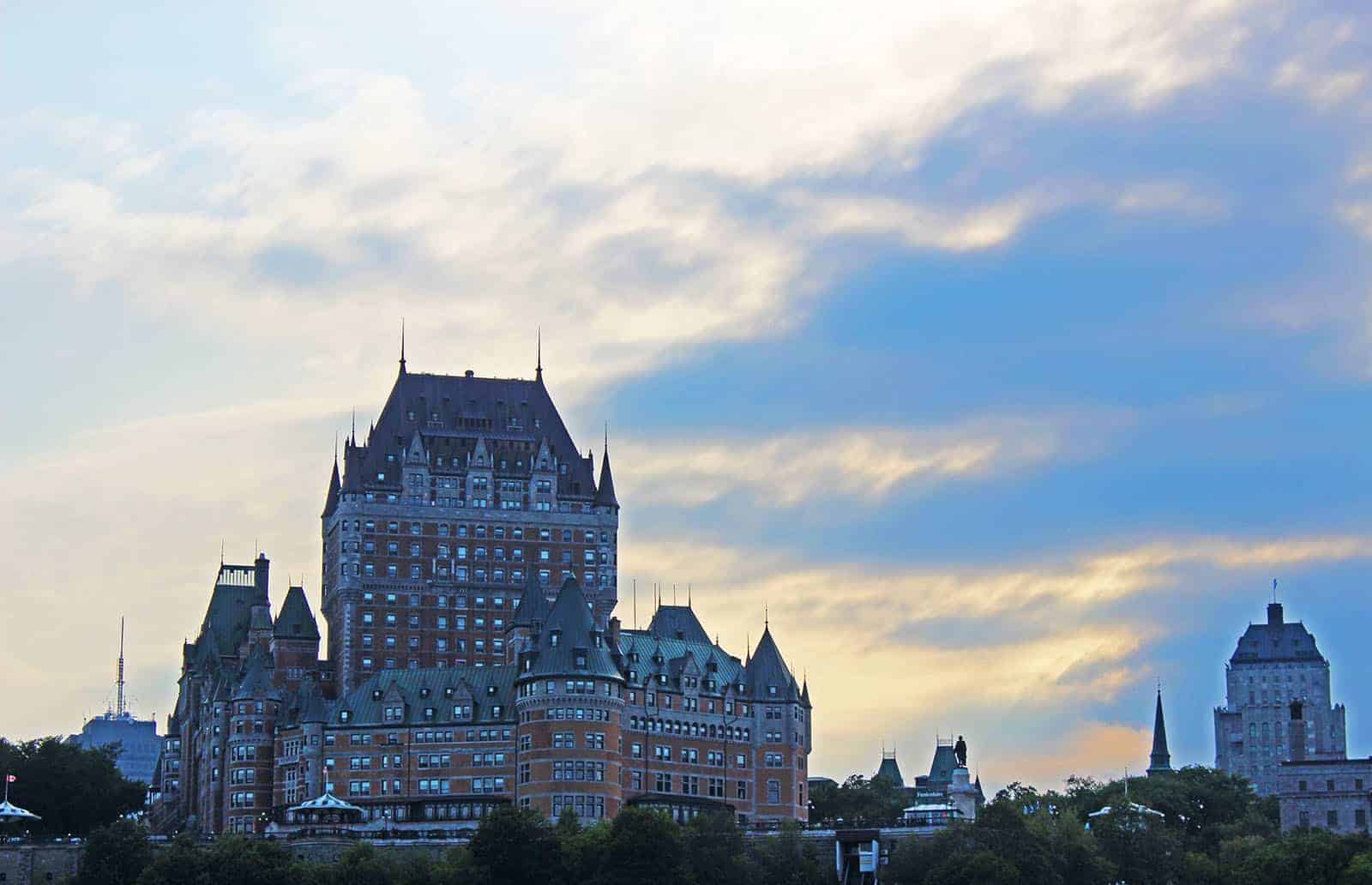 To access the ferry, it is really easy – walk down to Old Port along the waterfront to the far southern point of Rue Dalhousie. The actual address is on Rue des Traversiers. You will likely see a bunch of boats, and one of them will be your ferry boat. Enter the building for the ferry and you’ll be able to purchase your tickets inside at a ticket booth. If you’re actually interested in stopping in Lévis, I’ve heard that it can be a great spot for a picnic or to ride bicycles around, although we didn’t actually spend any time there ourselves.