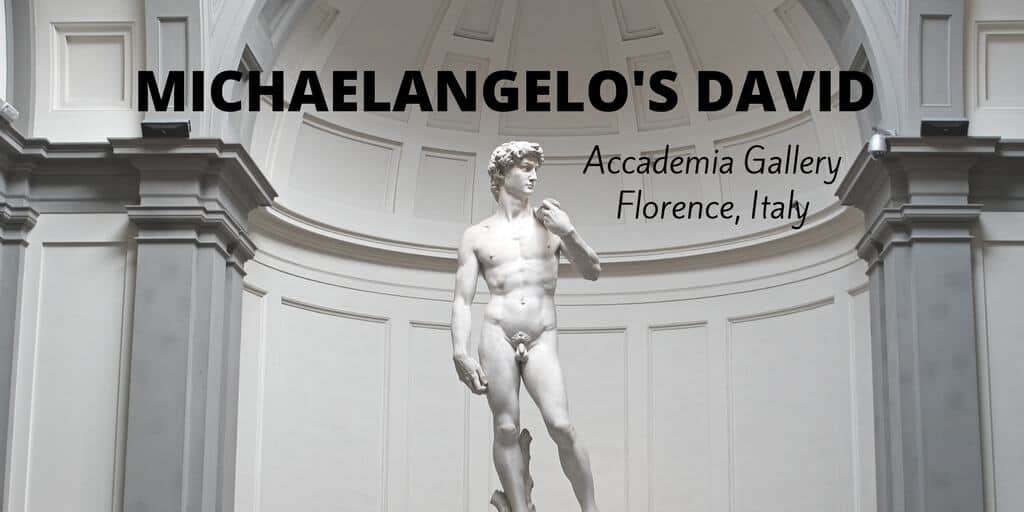 It’s a masterpiece you need to see when you travel to Florence.

Michaelangelo’s David is arguably the most famous statue in the world. Even if you’re not the greatest fan of history or art, it’s such an iconic sculpture that you’ll want to see with your own eyes. However, if you are interested in history or art, you’re in the right place. Wandering down the street in Florence is like walking through a museum, never mind being inside an actual museum itself.

If you want to lay eyes on David himself, you’re going to want to pay a trip to the Accademia Gallery. That’s where Michaelangelo’s David resides.

After walking around a corner in the Accademia Gallery, we saw Michaelangelo’s David for the first time. He stood, all alone, with a sea of people beneath him. The statue of David is larger than life…literally. He is 5.16 meters tall (nearly 17 feet), almost three times the size of the average man.

Contrary to what I read online prior to visiting, we were allowed to take photographs of David. When I posted my pictures on social media, numerous people were surprised that I was able to take photos. The rules for photographs have likely changed over time. No one tried to stop us from taking pictures, and almost everyone had their cameras out. The only sign I saw regarding photographs was one stating, “No selfie sticks!”. 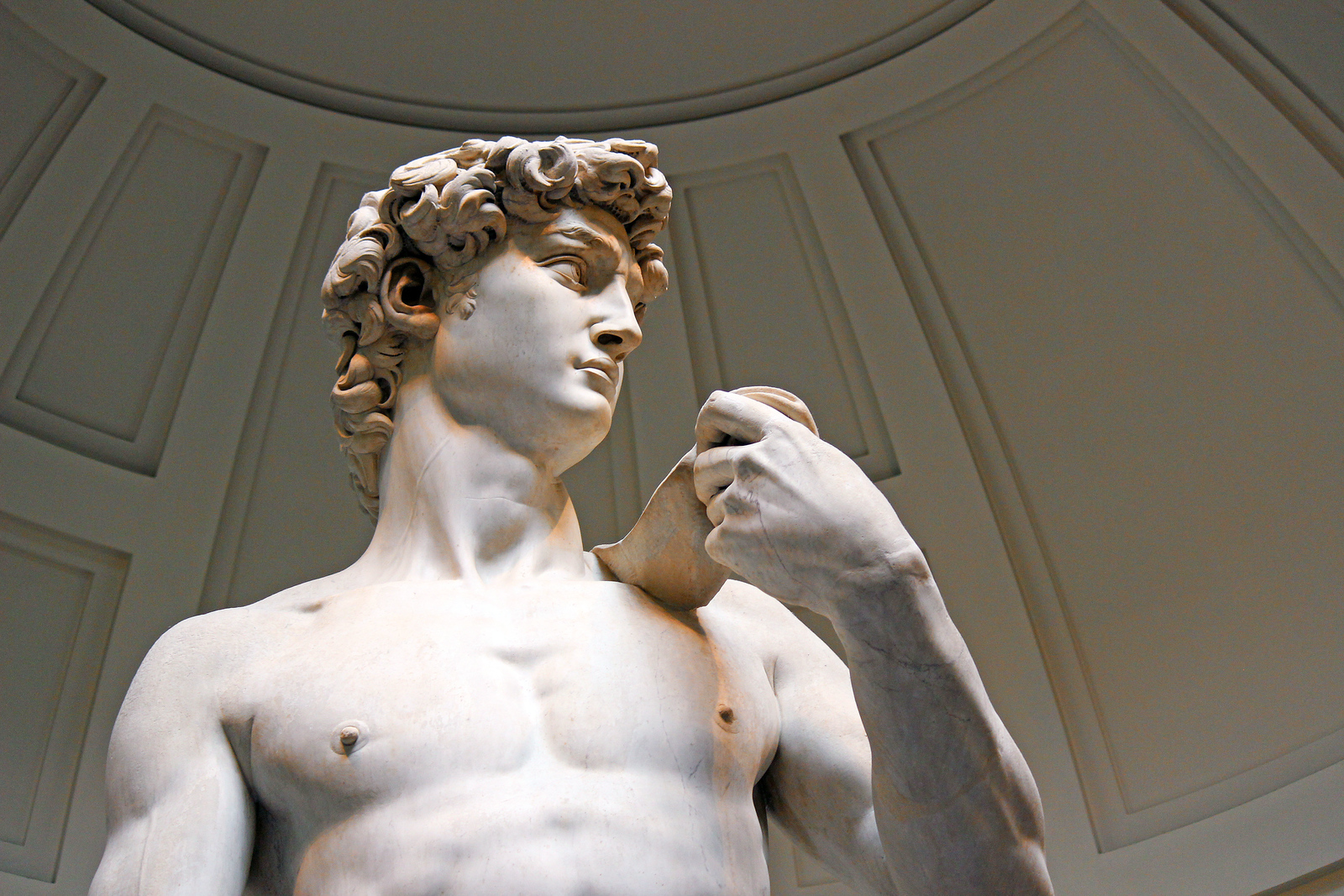 Michaelangelo’s David statue represents the biblical hero from the story, David and Goliath. David carries a rock in his right hand and a sling over his left shoulder. Historians believe that David displays an expression of anxiety on his face as he is about to face the giant, Goliath in that fabled epic battle.

He was carved between 1501 and 1504 from one single block of marble. Isn’t that incredible? That block of marble was actually used and discarded twice because it was too difficult to work with. He was originally intended to be placed on the roof of Florence’s cathedral, the Duomo. However, he was so beautiful that he needed to be appreciated up close. This explains why he was sculpted to be nearly 17 feet tall – he was going to appear much smaller from the rooftop.

I should have taken another picture showing the massive crowds in the piazza when we were in Florence. Tom Hanks was inside Palazzo Vecchio, along with other cast and crew members, shooting the film, Inferno. We didn’t enjoy any celebrity sightings, but people were crowded around waiting for hours to catch a glimpse at Tom Hanks!

There are several statues in Piazza della Signoria, including The Rape of the Sabine Women. A plaster copy of that statue is also on display at the Accademia Gallery. 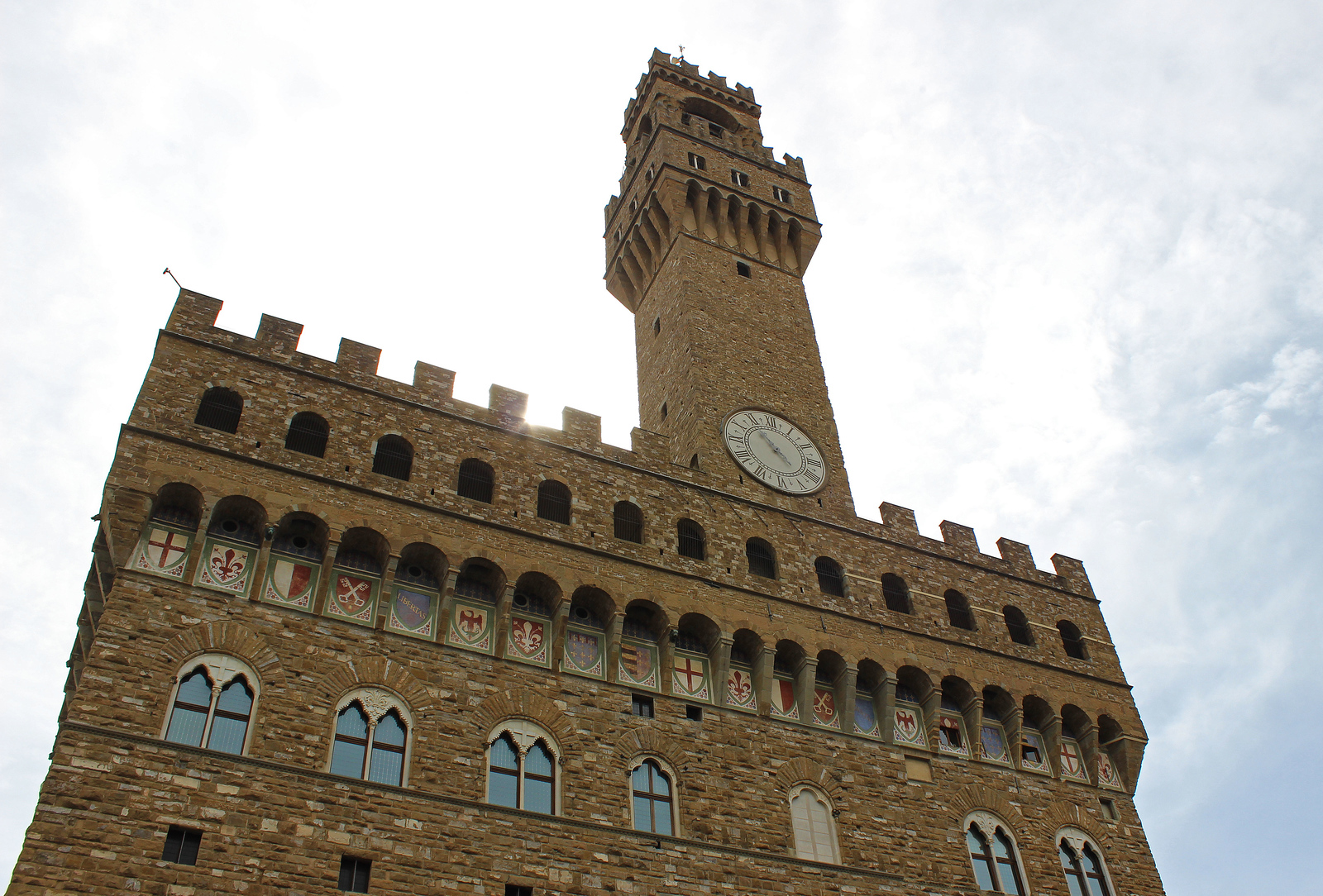 The details of Michaelangelo’s David are astounding when you view the statue up close. You can see sculpted muscles, every bulging vein, and even the texture of his skin. It was so incredible that Michaelangelo carved this masterpiece from one block of marble. Only so much can be captured with photographs. You really have to see David in person to fully appreciate him. 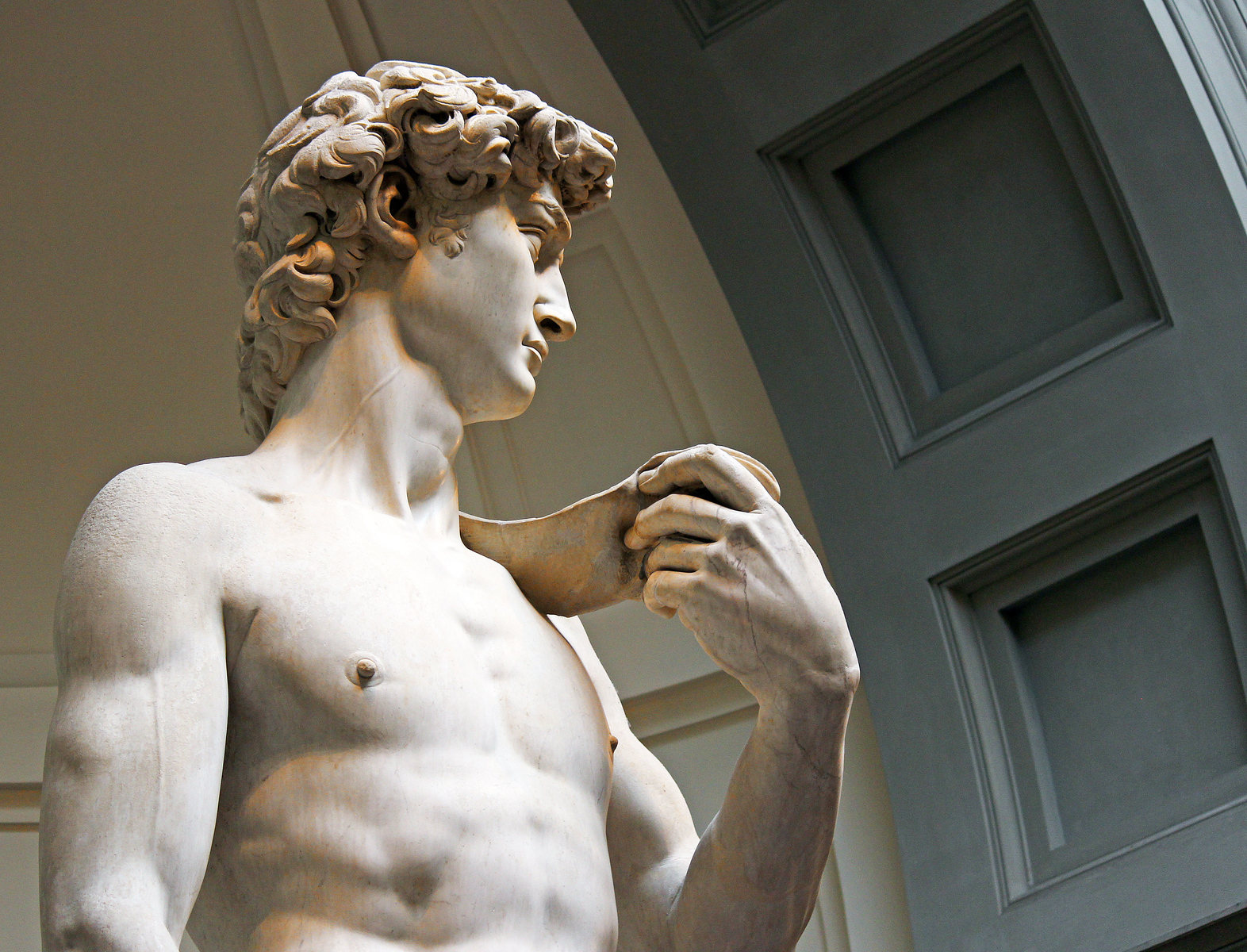 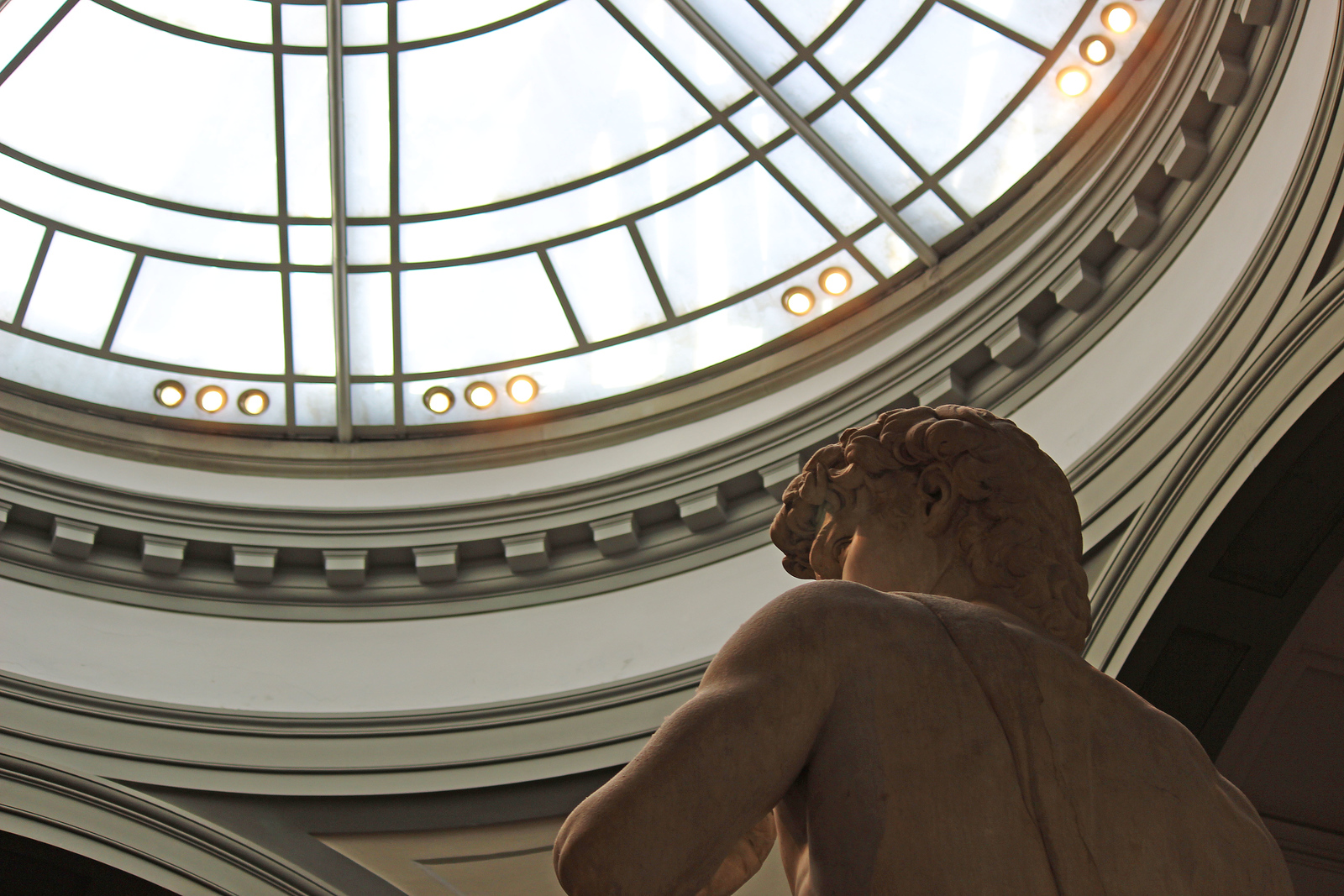 OTHER ART AT ACCADEMIA GALLERY

While Michaelangelo’s David is the main attraction, there are lots of other works of art and sculptures at Accademia Gallery. While there were lots of paintings depicting religious imagery, one of the most interesting places we discovered was the Hall of Models. You’ll find this near the statue of David. Unfortunately, this room was closed to visitors when we visited, but we were able to admire the sculptures through a large doorway. We marveled at many plaster casts and marble statues by sculptor, Lorenzo Bartolini. I’m not sure why this area had a barrier in front of it when we visited. You might be able to walk right through it now. 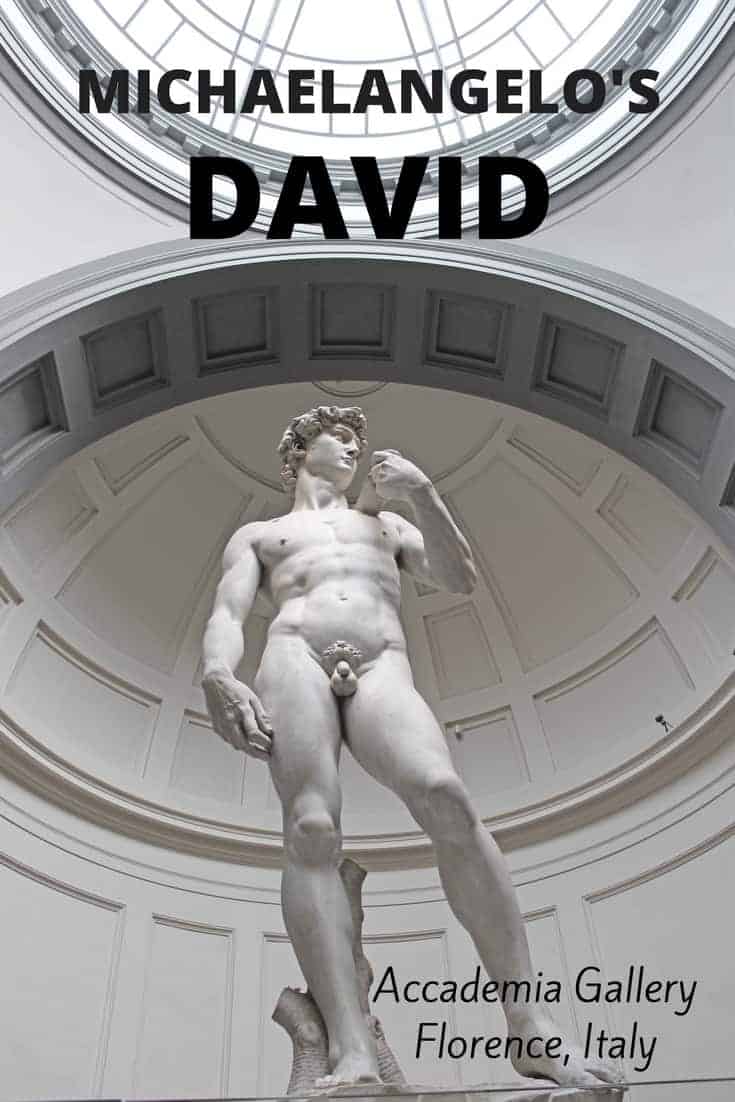 Have you seen Michaelangelo’s David in person?

Hi guys - Great pictures from Florence and the Accademia! That really was one of our favorite stops in Italy - both Florence and Michaelangelo's David. It's just amazing seeing it in person. Great post!

These are lovely photos. Due to some ticketing goof ups, we missed going to Florence or Firenze as it is locally called. Florence has perhaps the biggest collection of sculptors of the renaissance period. Talking of coincidences , I very recently finished reading Agony and Ecstasy by Irving Stone.

Loved Florence and loved David. From a distance I was underwhelmed but as you get closer the enormity and perfection of the work really dawns on you. Always spins me out that it's done from the one MASSIVE chunk of marble.

I loved this art gallery! You have taken some really wonderful pictures. I'm amazed at Michaelangelo's skills - David looks so perfect. Thanks for this virtual journey. I would definitely visit this one when I go there.

Going into the museum was worth it for David - but I must admit, I really enjoyed the artwork/sculptures in the courtyard outside the entrance. And it was a great place to people watch too!