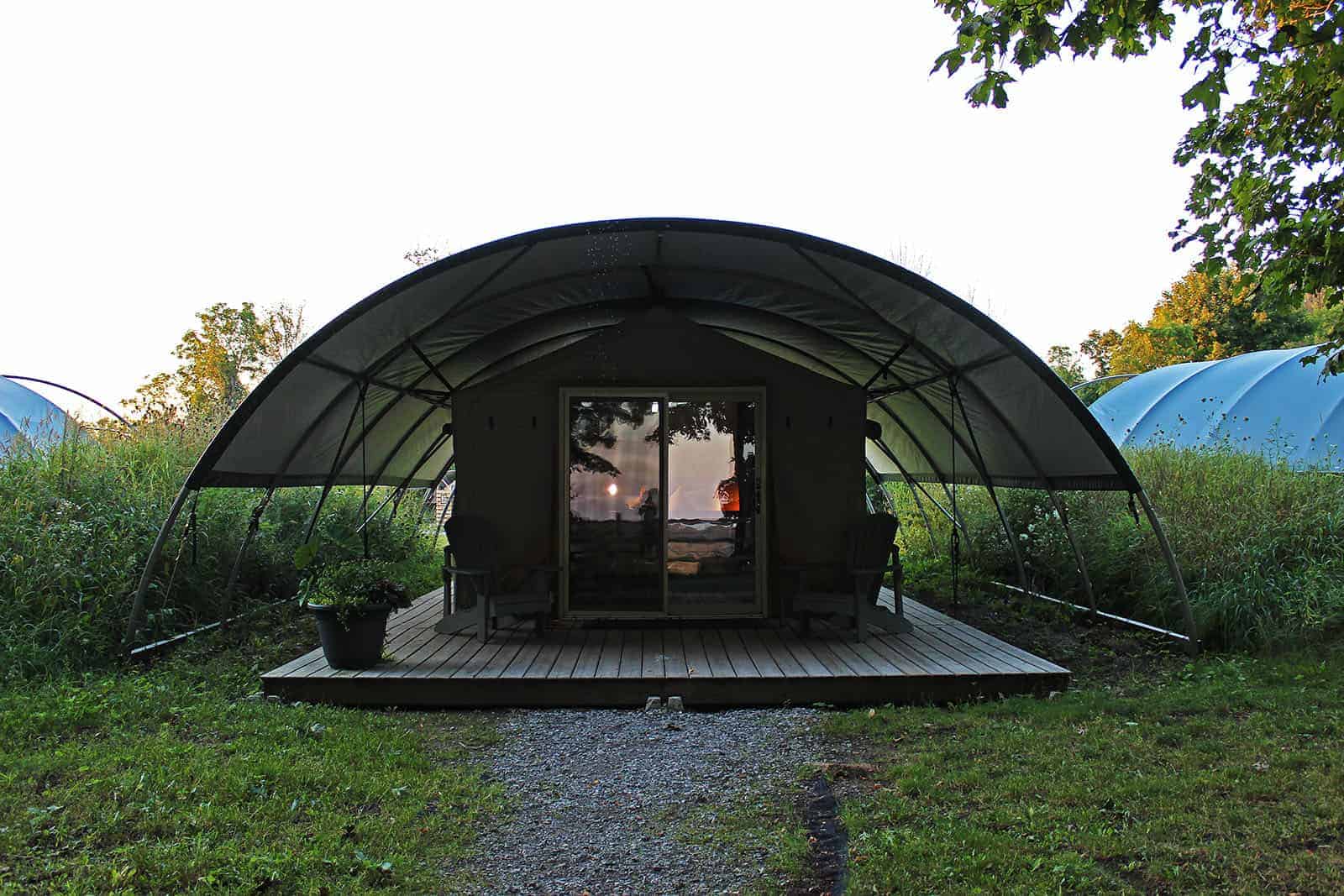 Have you ever gone glamping before?

Or are you wondering, exactly what is glamping?

Glamping was an entirely new thing to the both of us, though it was totally our style. It’s “glamorous camping” or luxury camping. Neither Justin or I are really into camping, but we love spending time outdoors in nature. For this reason alone, glamping was an ideal situation for us. We happily escaped city life to a relaxing natural setting while maintaining some of the comforts we enjoy at home.

When we were zip lining at Long Point Eco Adventures, we discovered that they had their own glamping tents, which they dub, “Wilderness Suites”. These permanent structures are set up on their property, overlooking the spectacular Long Point Biosphere Reserve. Their glamping accommodations are completely unique to Ontario, modeled after those found in Africa. The owner was inspired by his accommodation experiences while climbing Mount Kilimanjaro in Africa, and added some original Canadian flair. The only luxury glamping in Ontario of this kind is found here at Long Point Eco Adventures. We stayed in a King Suite (glamping suite #5), which had the best view of Long Point Bay. 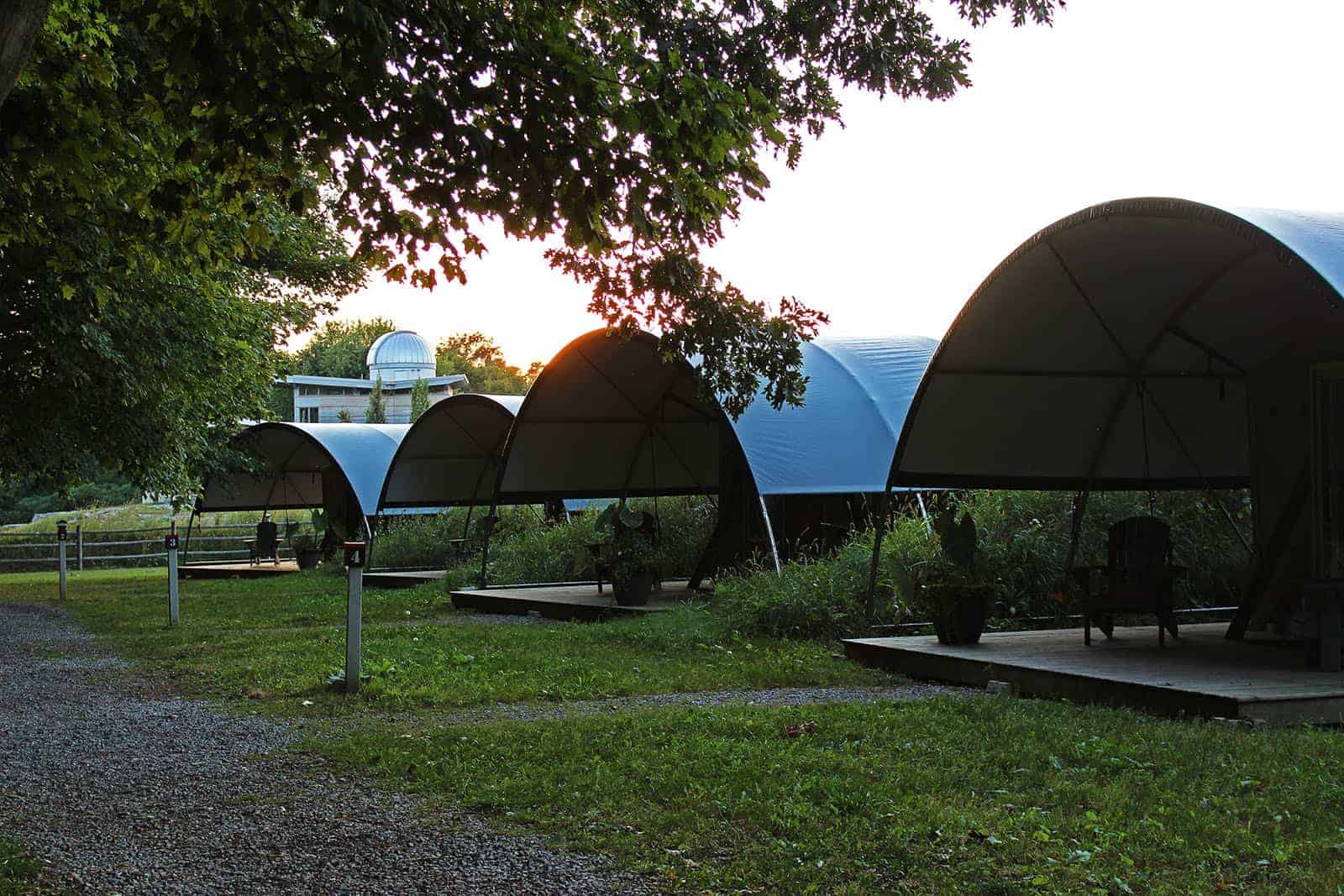 The view from inside our glamping tent 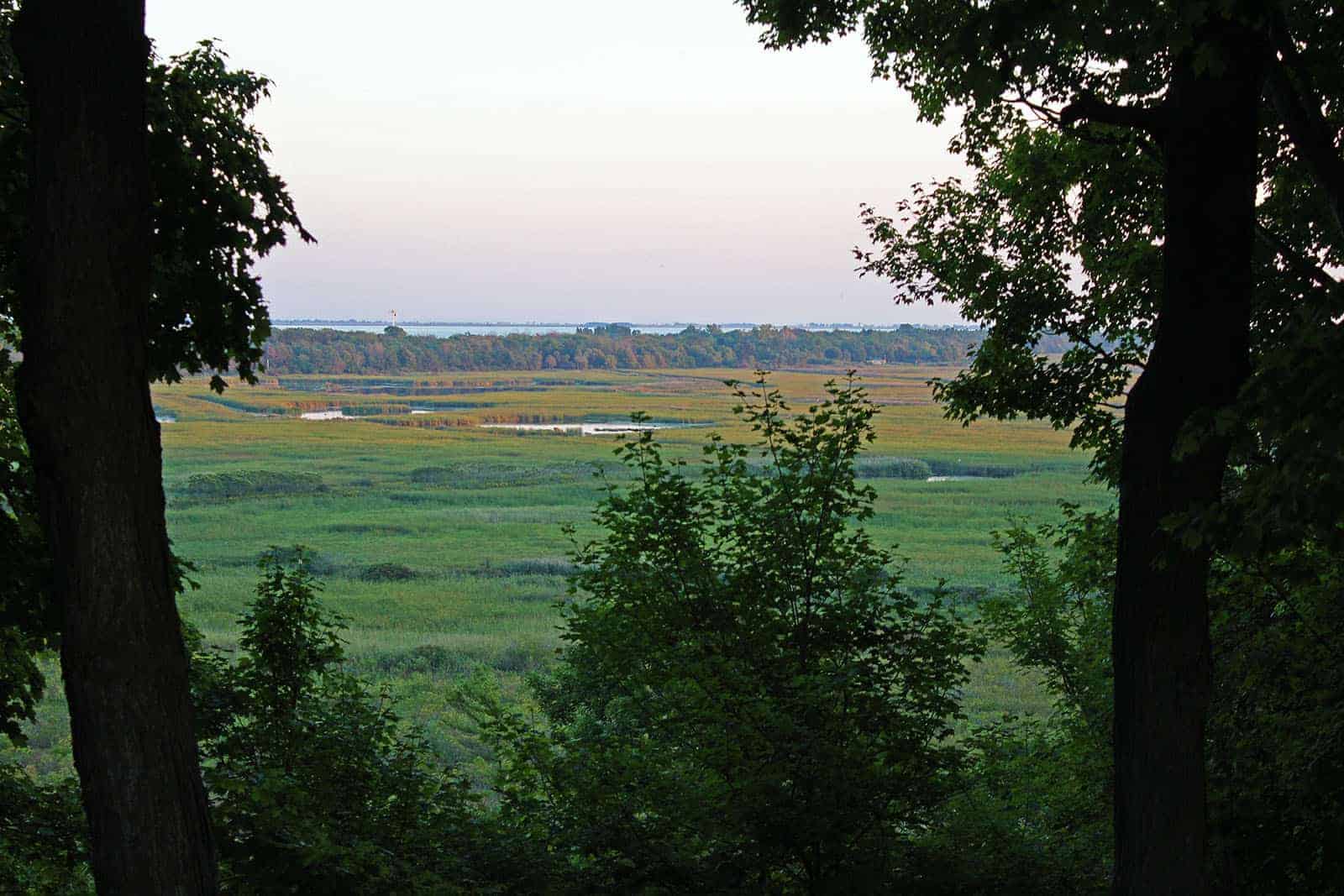 A Tour of Our Wilderness Suite

It is important to remember that you’re still camping. You still need to bring along bug spray (though we didn’t need any at this time of the year). At the same time, you can enjoy many modern luxuries that are often taken for granted when you’re staying outdoors. Let’s start with the sleeping arrangements. While the tents aren’t fully heated for the winter, there is a space heater that you can run if you’re cold at night. A fan is available for those hot days in the middle of the summertime. There is a luxurious king bed with a comfortable mattress and sheets. There’s even a heated blanket that can be controlled separately for each side of the bed. That’s something we don’t even have at home! 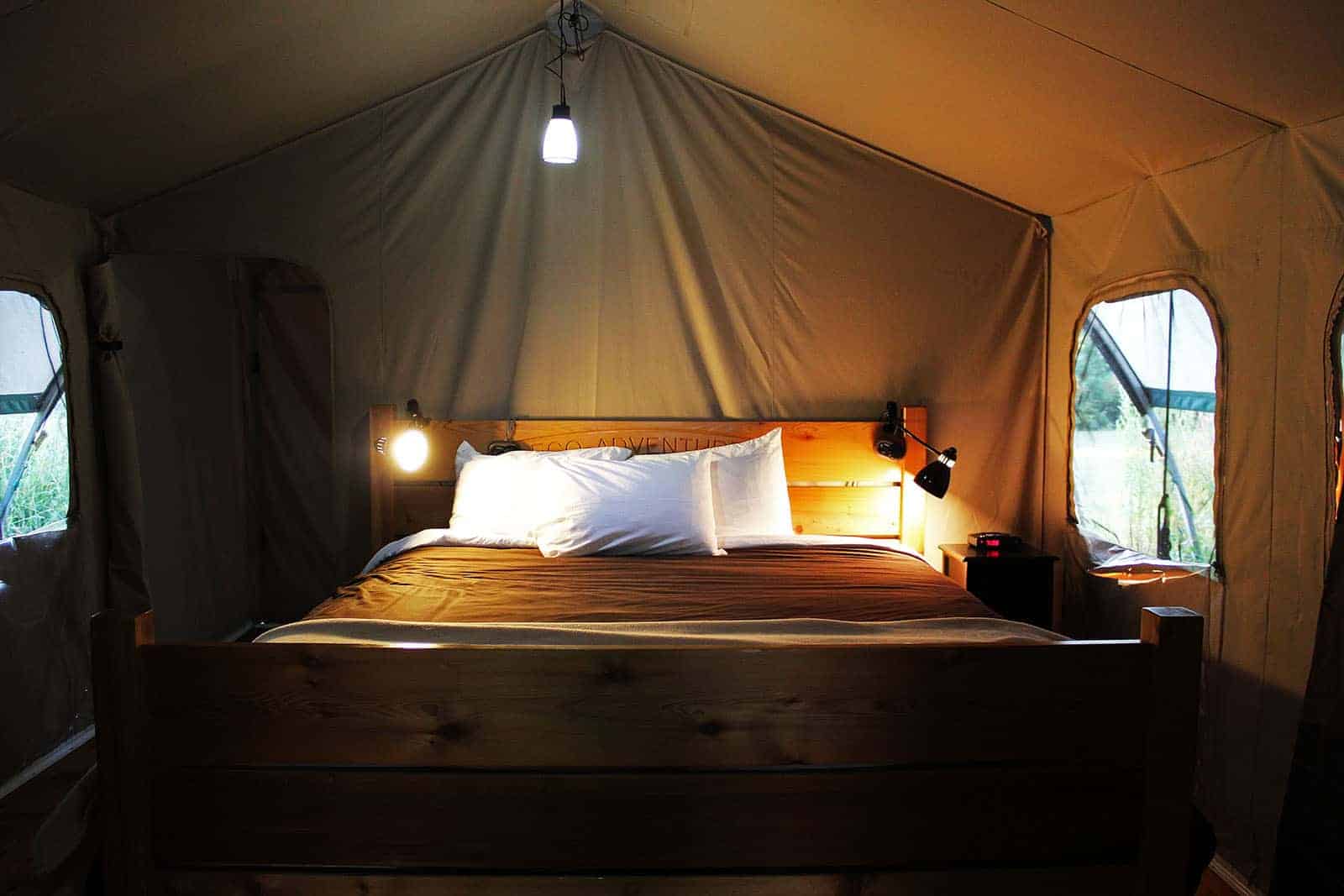 There are many reading lights and lamps to illuminate the way at night. However, you’re still living inside a tent, so all of the windows have to be zipped open from the inside and outside of the tent. There are protective screens to keep the insects out. You can enter and exit the tent using the sliding glass doors at the front. There are also electrical outlets to plug in all of your gadgets. And there’s free WiFi included with the stay. 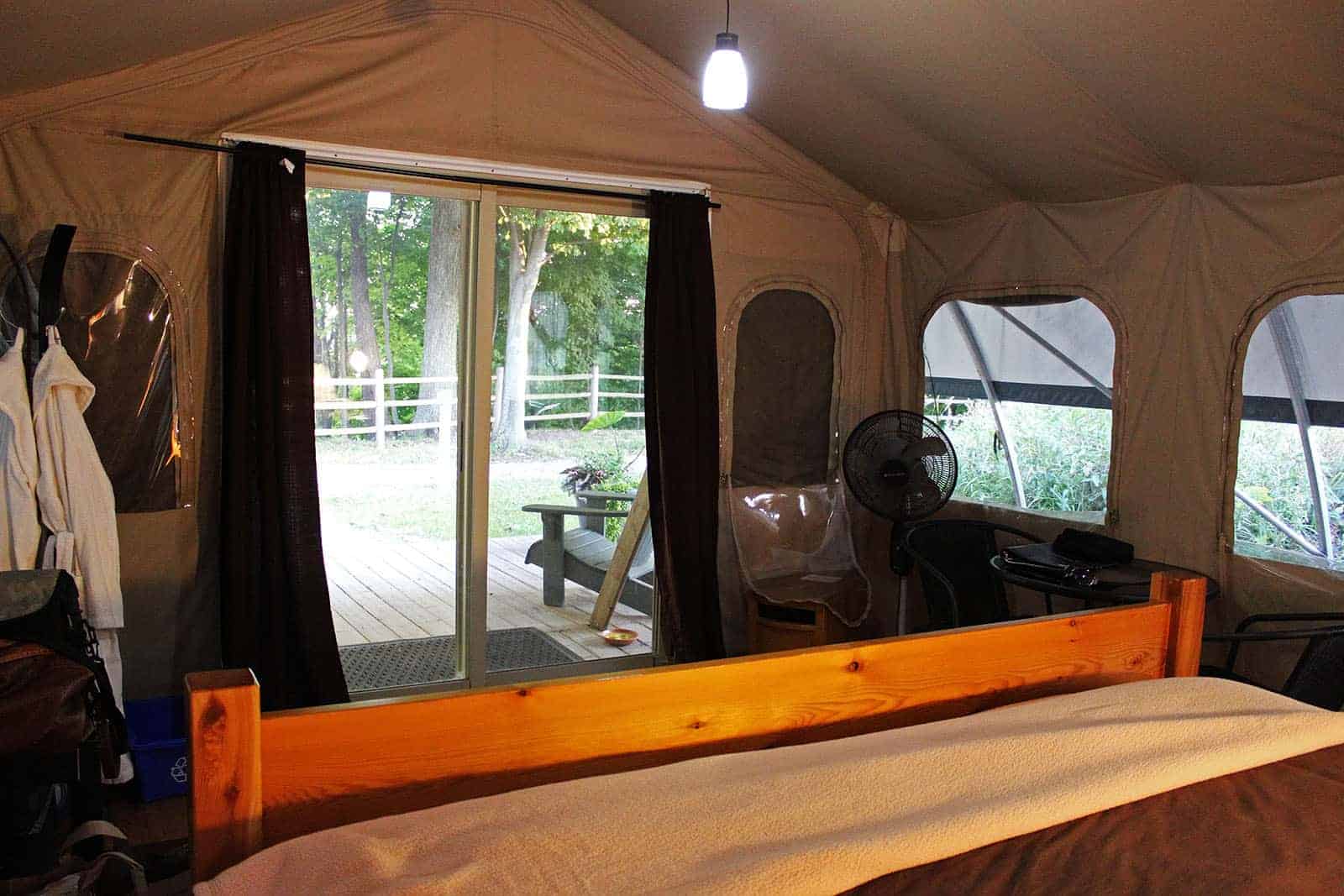 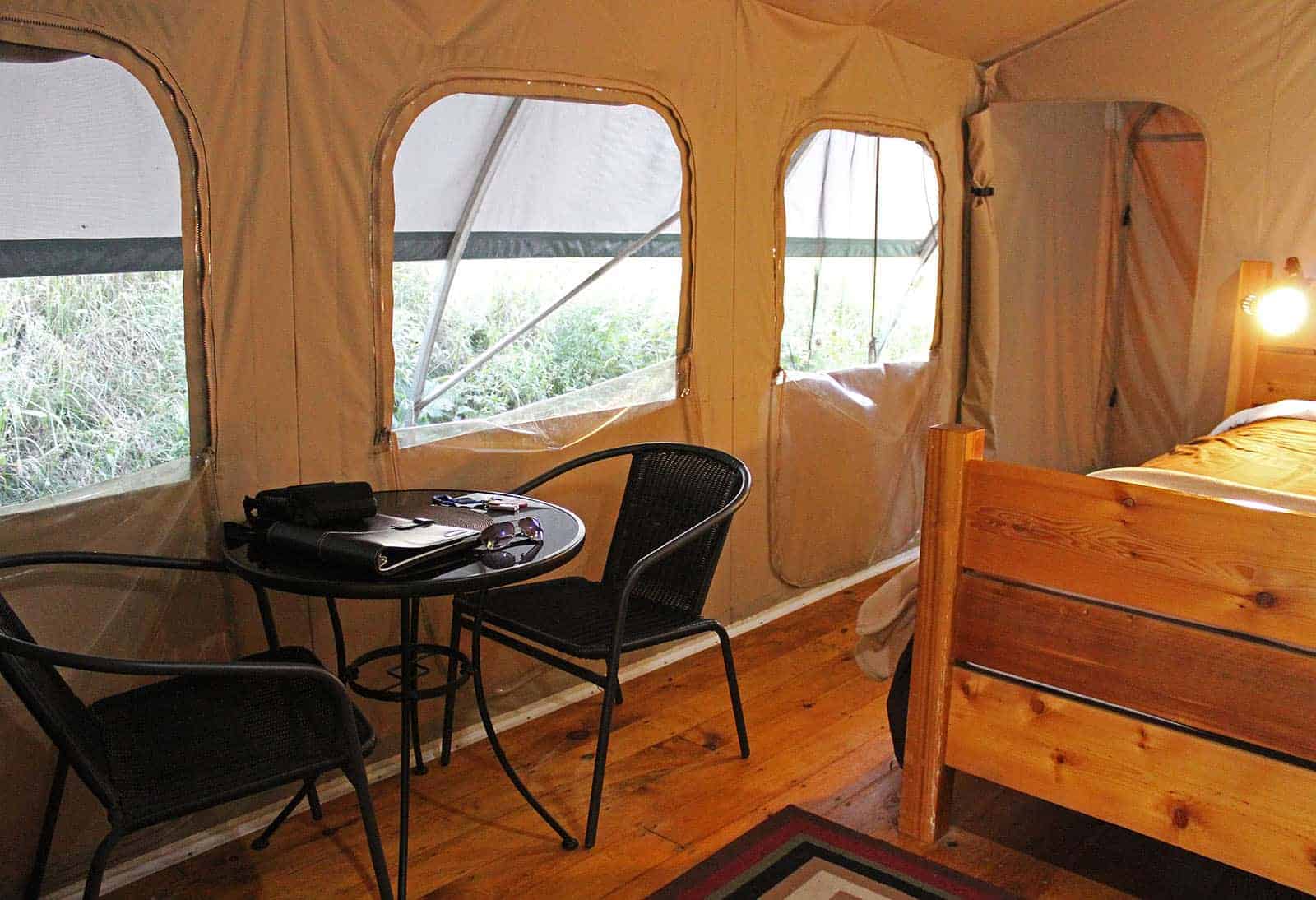 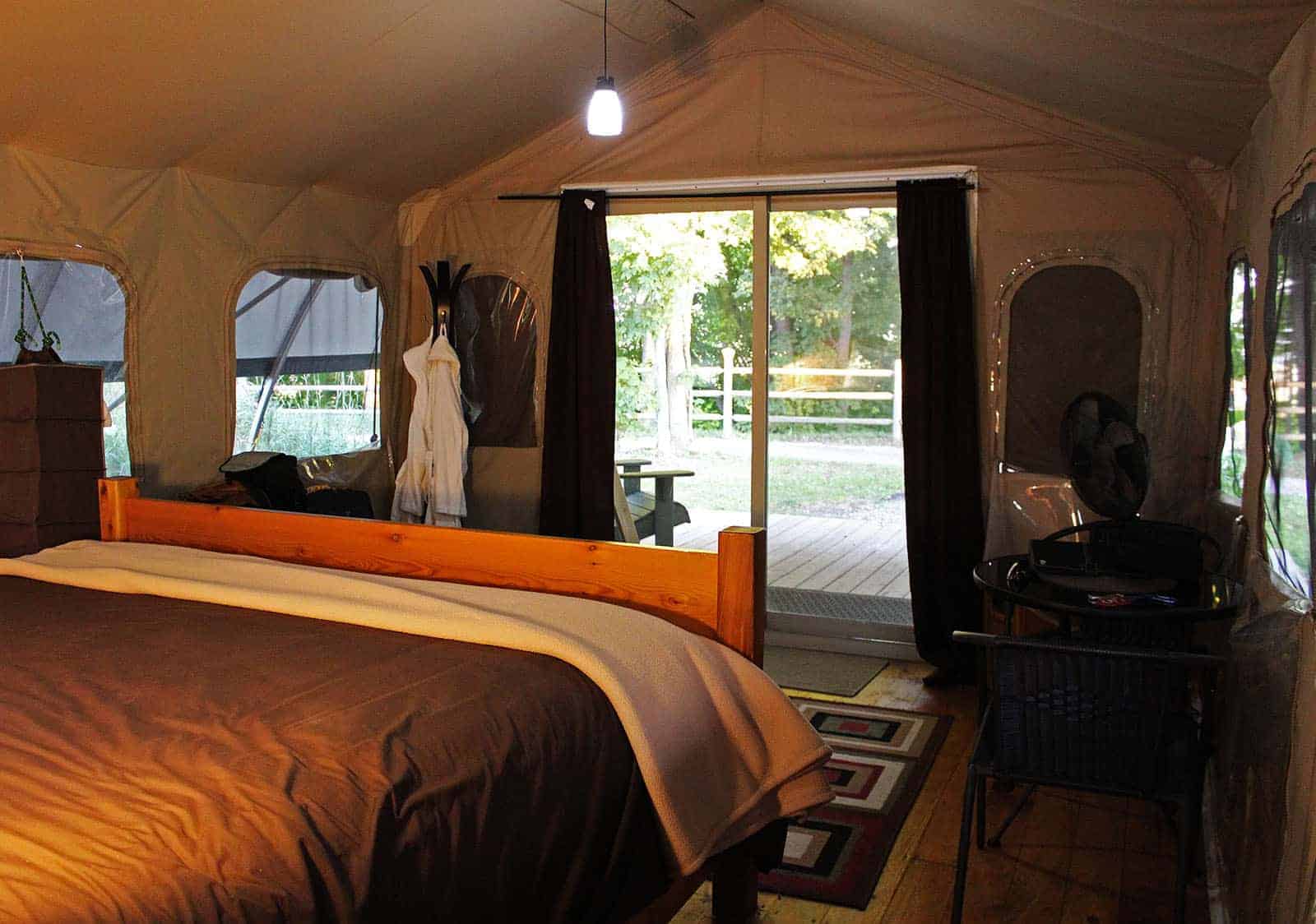 Glamping bathrooms sure beat the type of bathroom you’d use while camping! Rather than using public facilities or doing your business out in the forest, the wilderness suites come equipped with private bathrooms right in your own tent. In a separate space located behind the main bedroom area, you’ll find a toilet, a sink, towels, and even a small fridge. There is a private outdoor shower, too. Just unzip the doorway and you can access the rustic wooden shower. There’s about 7 minutes worth of hot water as each glamping tent has its own small hot water tank. I showered at night beneath the stars and had plenty of hot water. That was the first time that I showered outside and under the stars. It was fantastic! 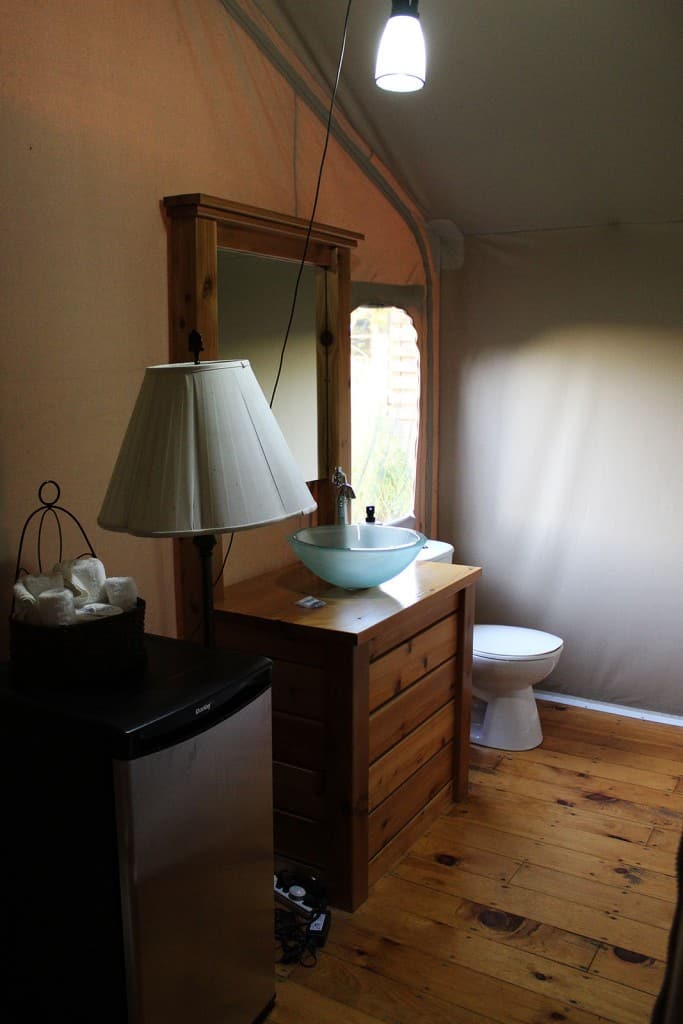 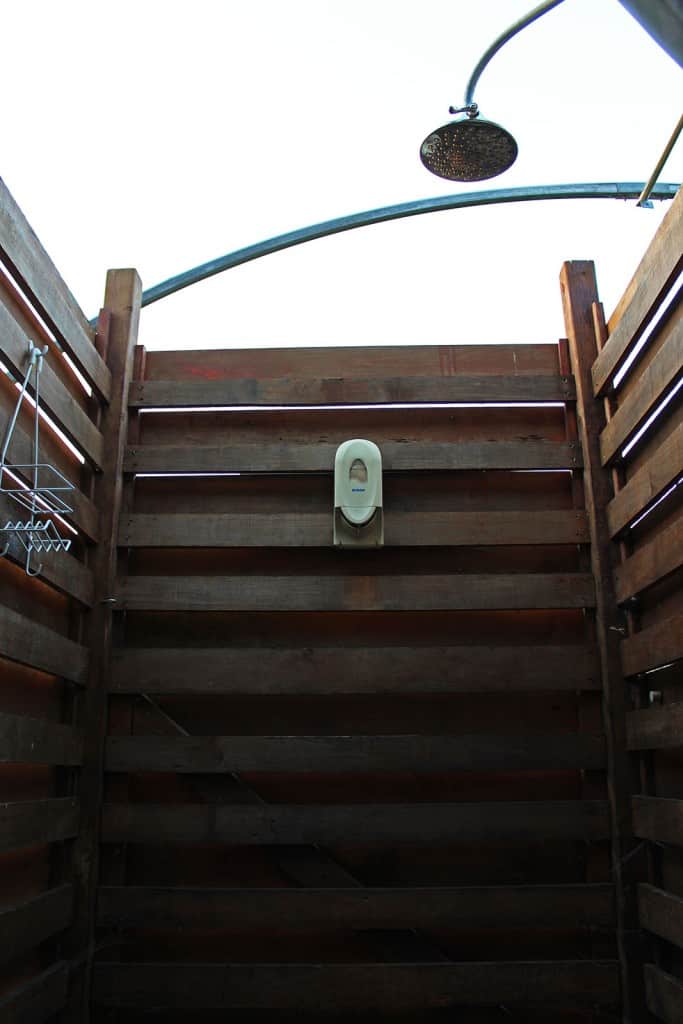 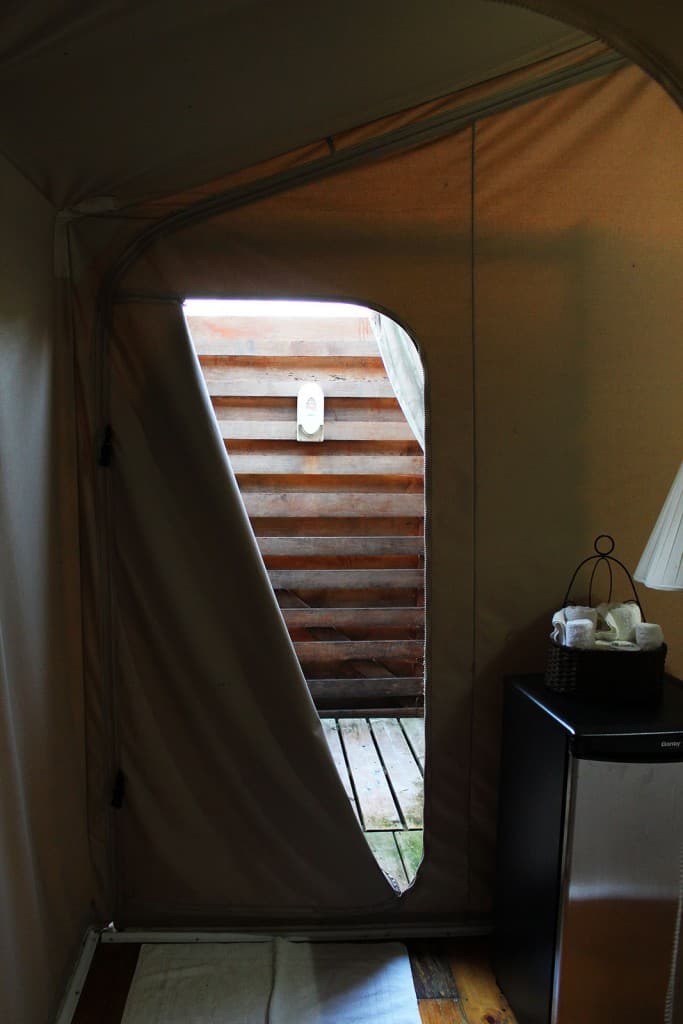 After we settled in and relaxed a bit in our tent, we headed outdoors armed with graham crackers, marshmallows, and chocolate. It was nighttime; we were so fortunate that it was such an incredibly clear night without a cloud in the sky. There were so many twinkling stars above. The staff at Long Point Eco Adventures started a large bonfire in a fire pit near their central building. One member of staff works overnight just in case there are any emergencies. We were welcome to relax by the bonfire and toast marshmallows. For those who are wondering, we used vegan (and gluten-free) graham crackers, Dandies vegan marshmallows, and dark chocolate. The s’mores were decadent and delicious! 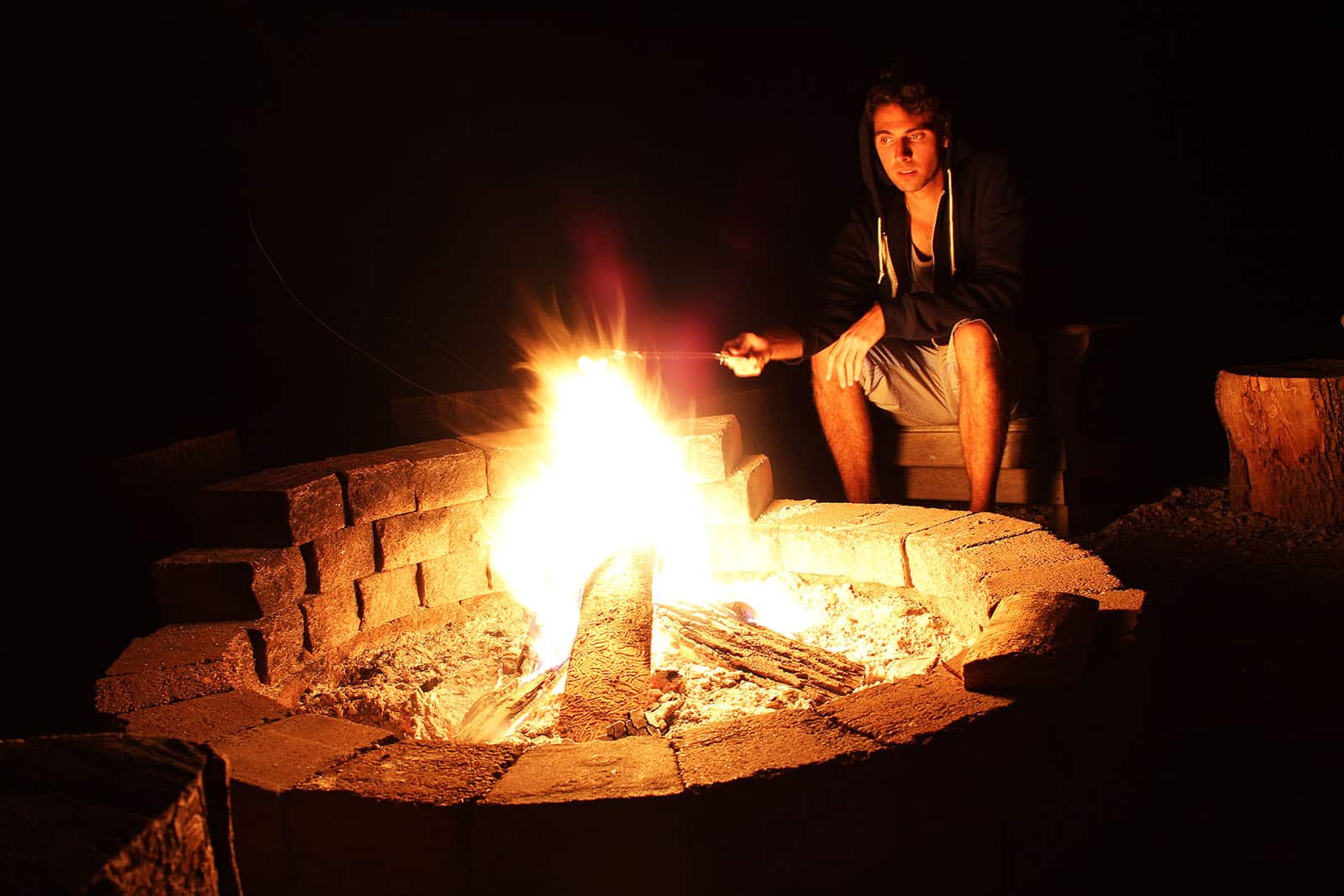 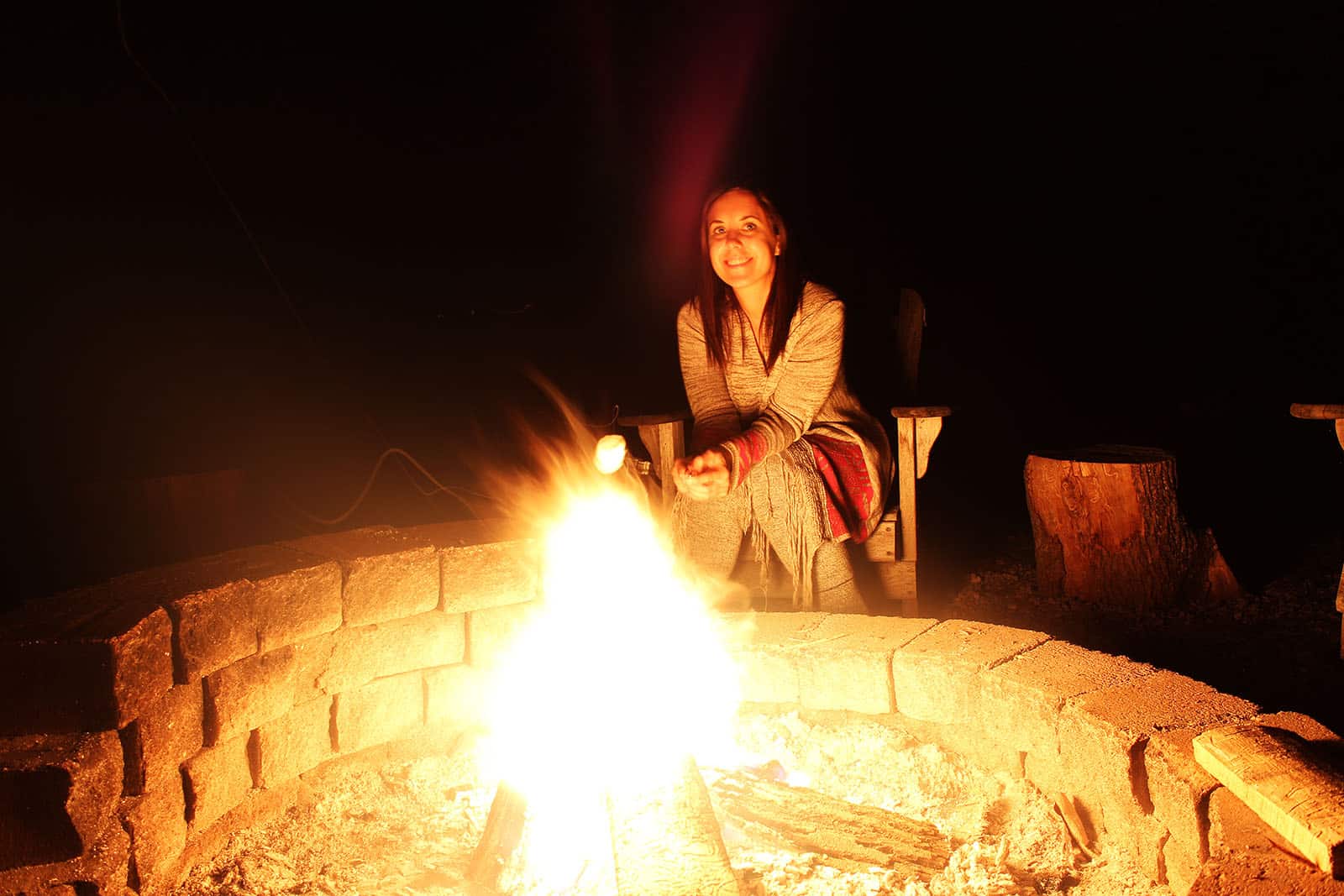 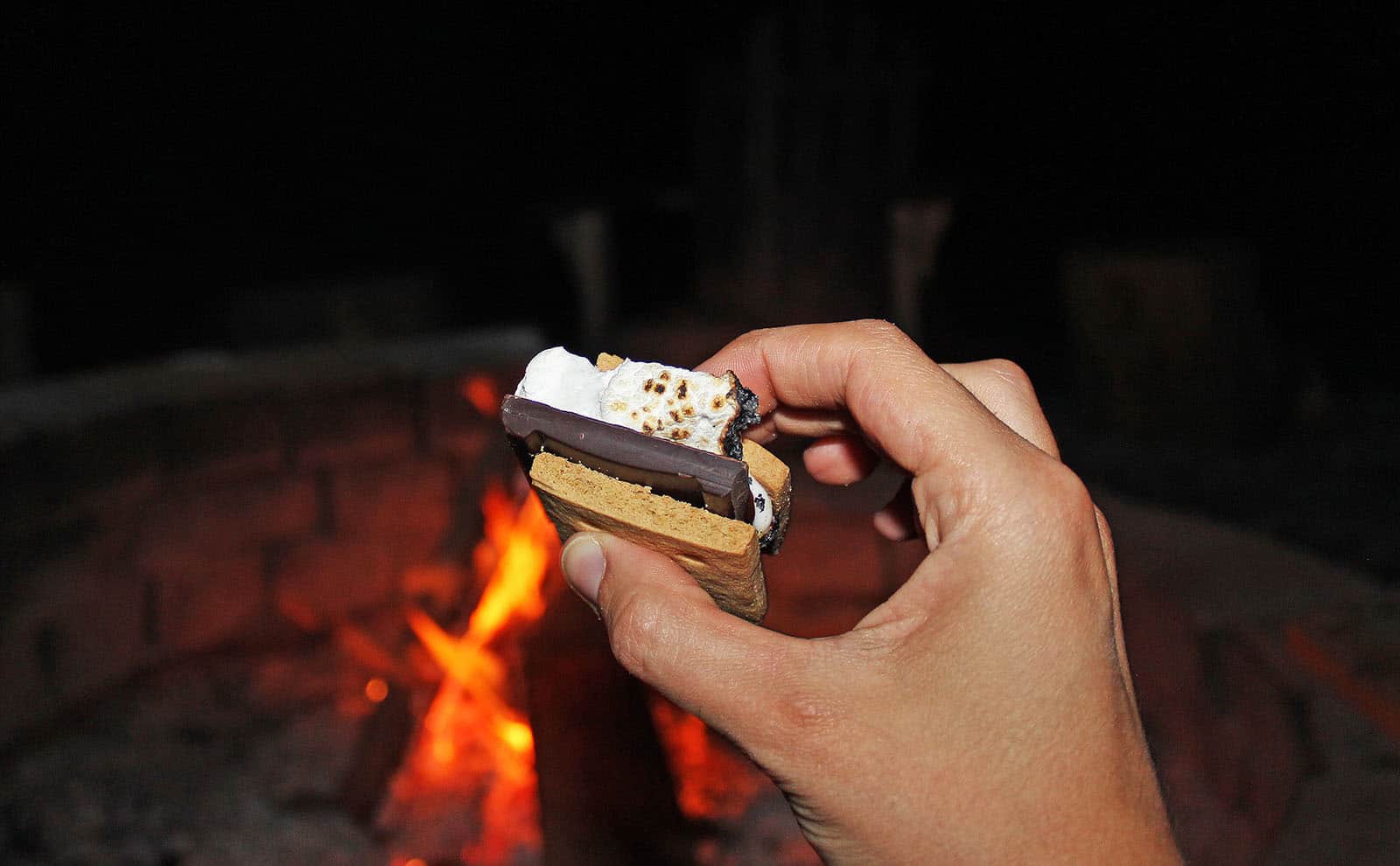 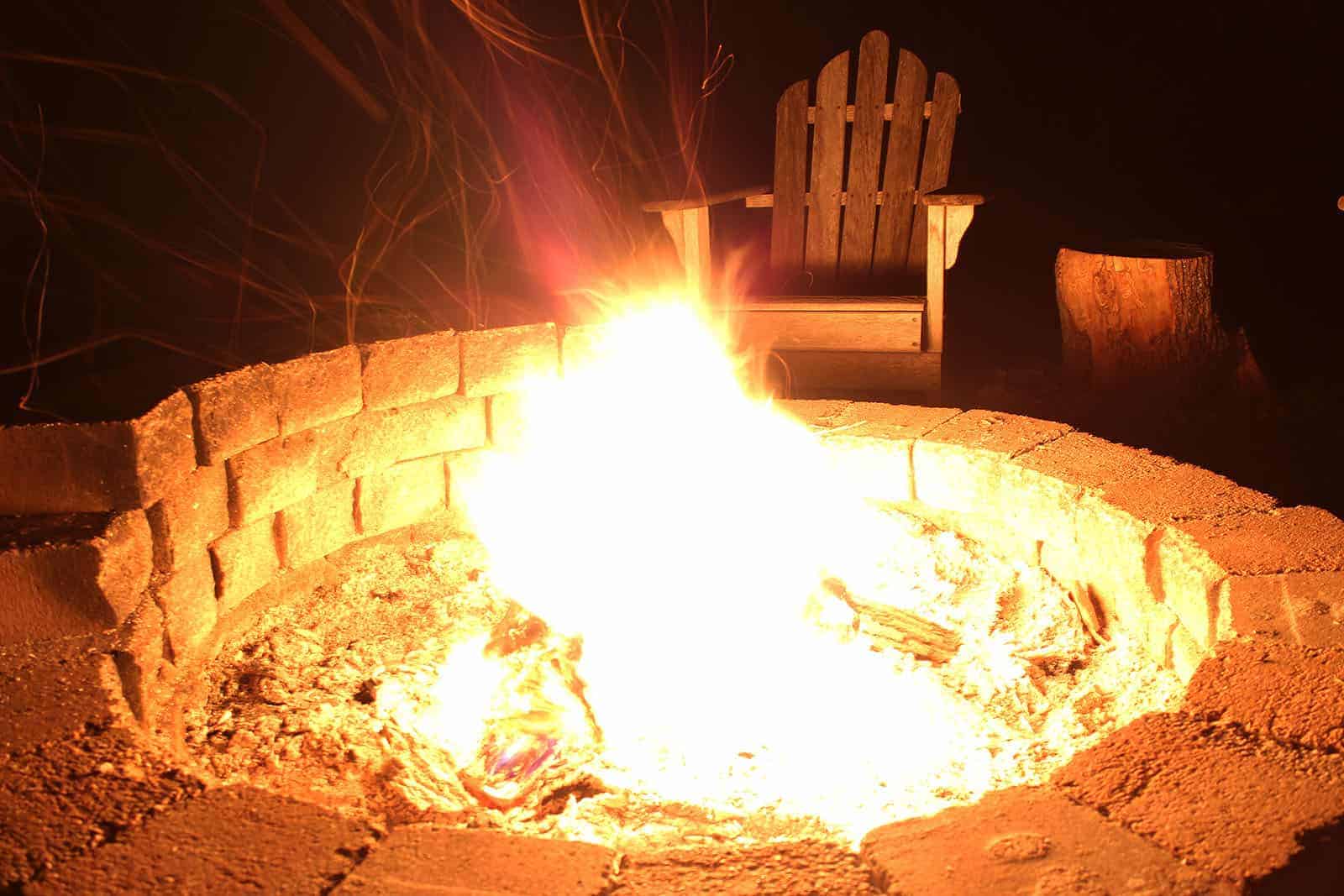 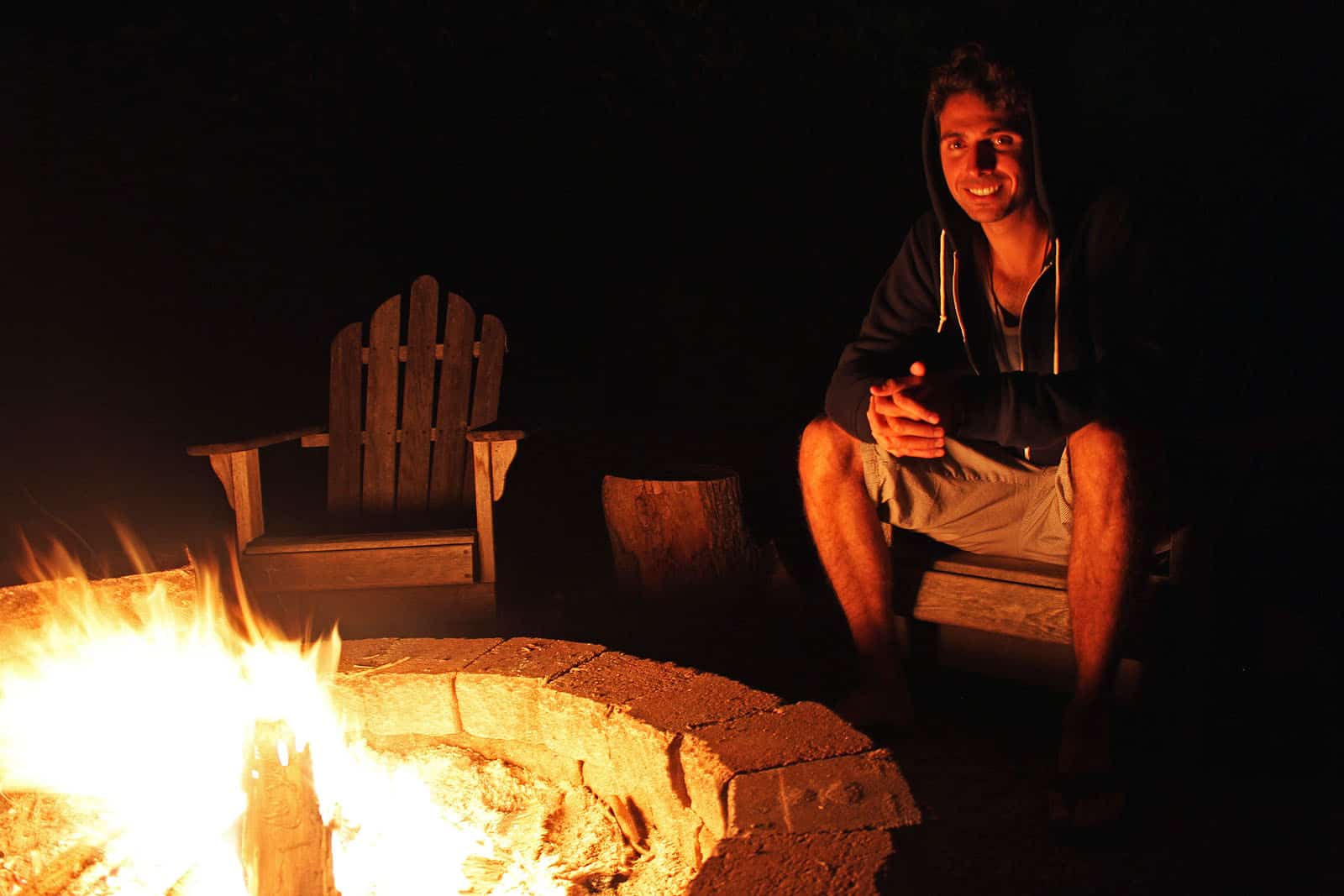 The best part about spending time outdoors? Being able to look up at the night sky and see so many stars. Gazing up at the Milky Way galaxy is even more impressive when you’re away from the light pollution of the city. We also played around with the camera for our first attempts at “light painting” using the glow of our cell phones. At first, we tried this with flaming marshmallows from the campfire, but they kept getting extinguished too quickly to make any impressions in photographs. 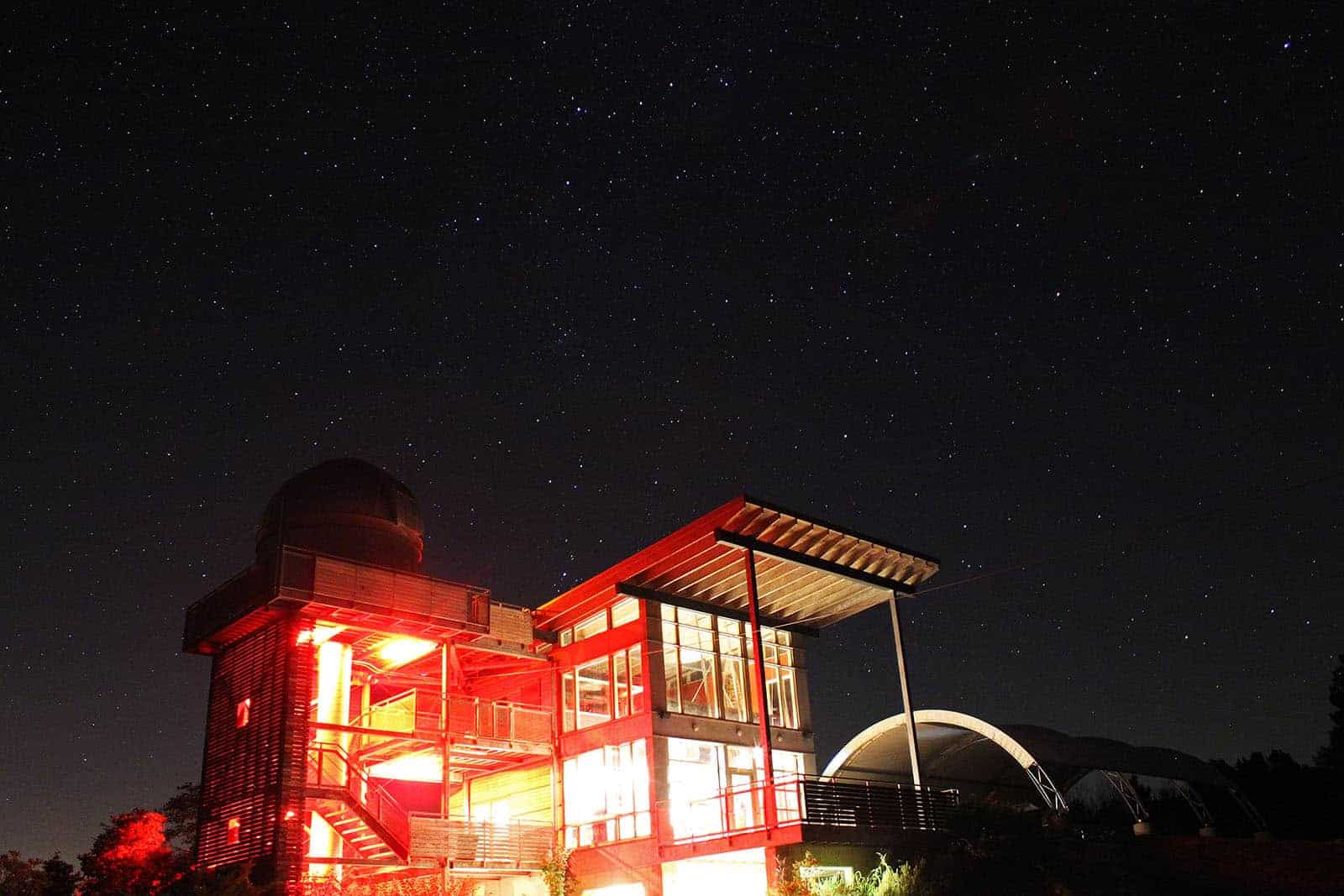 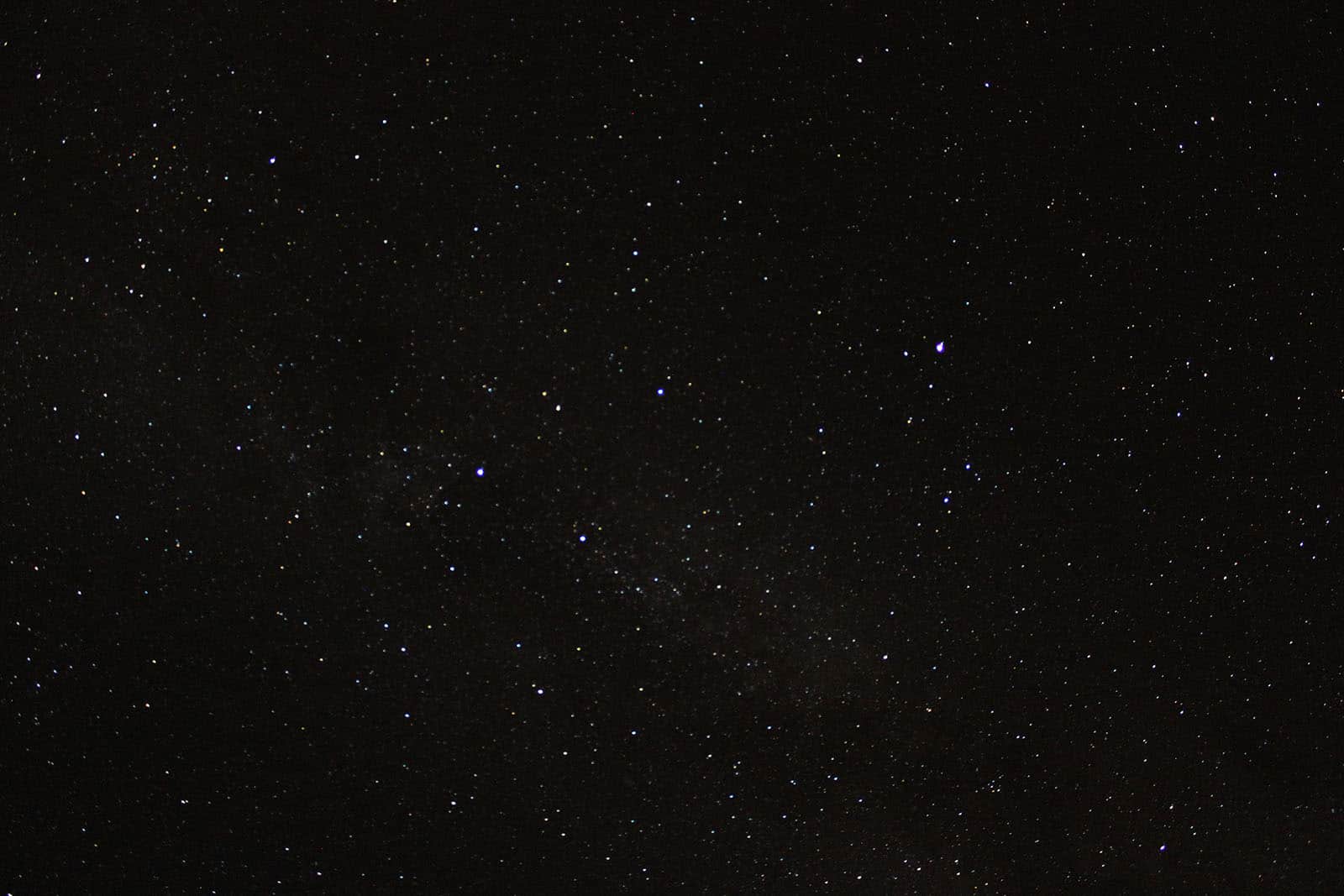 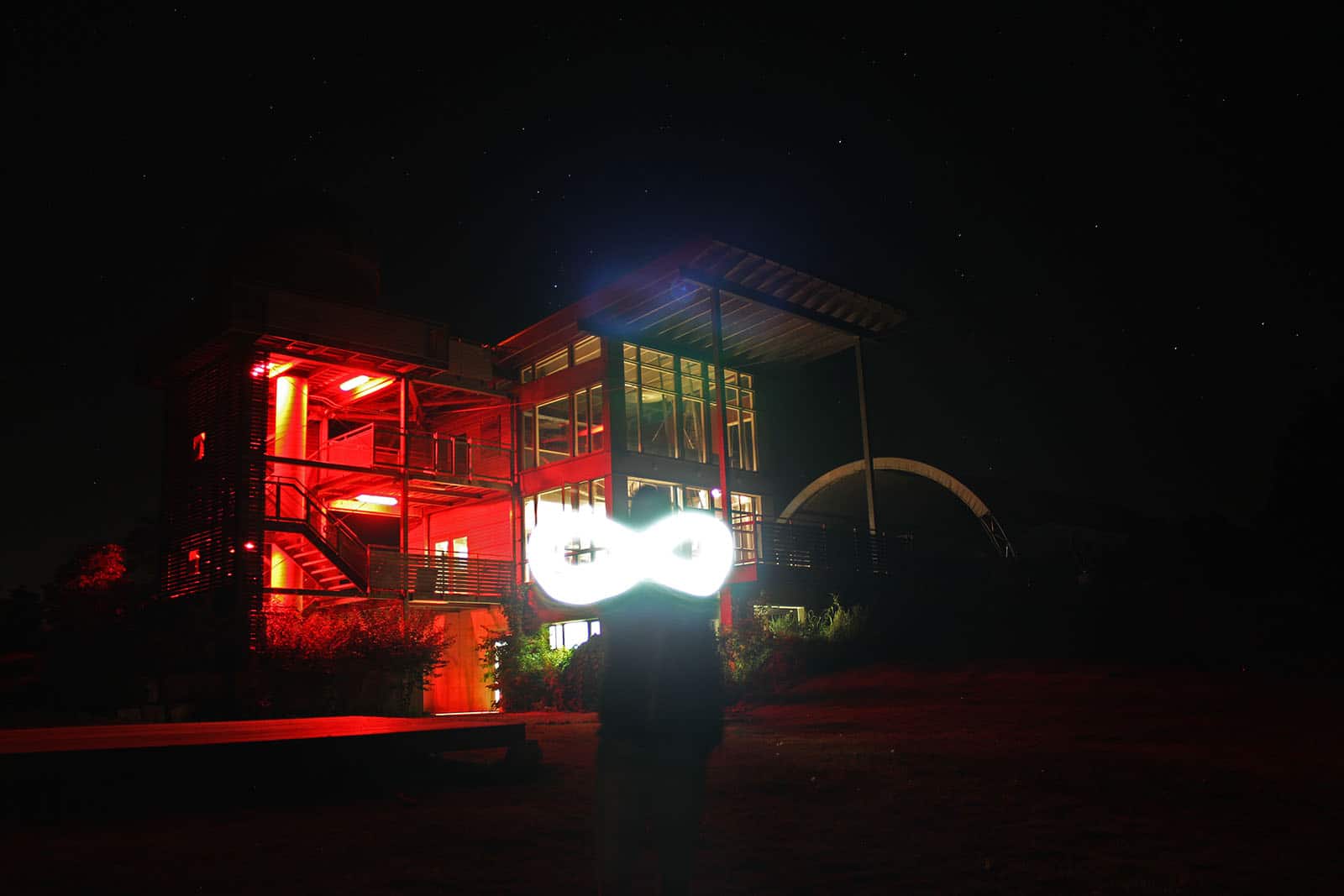 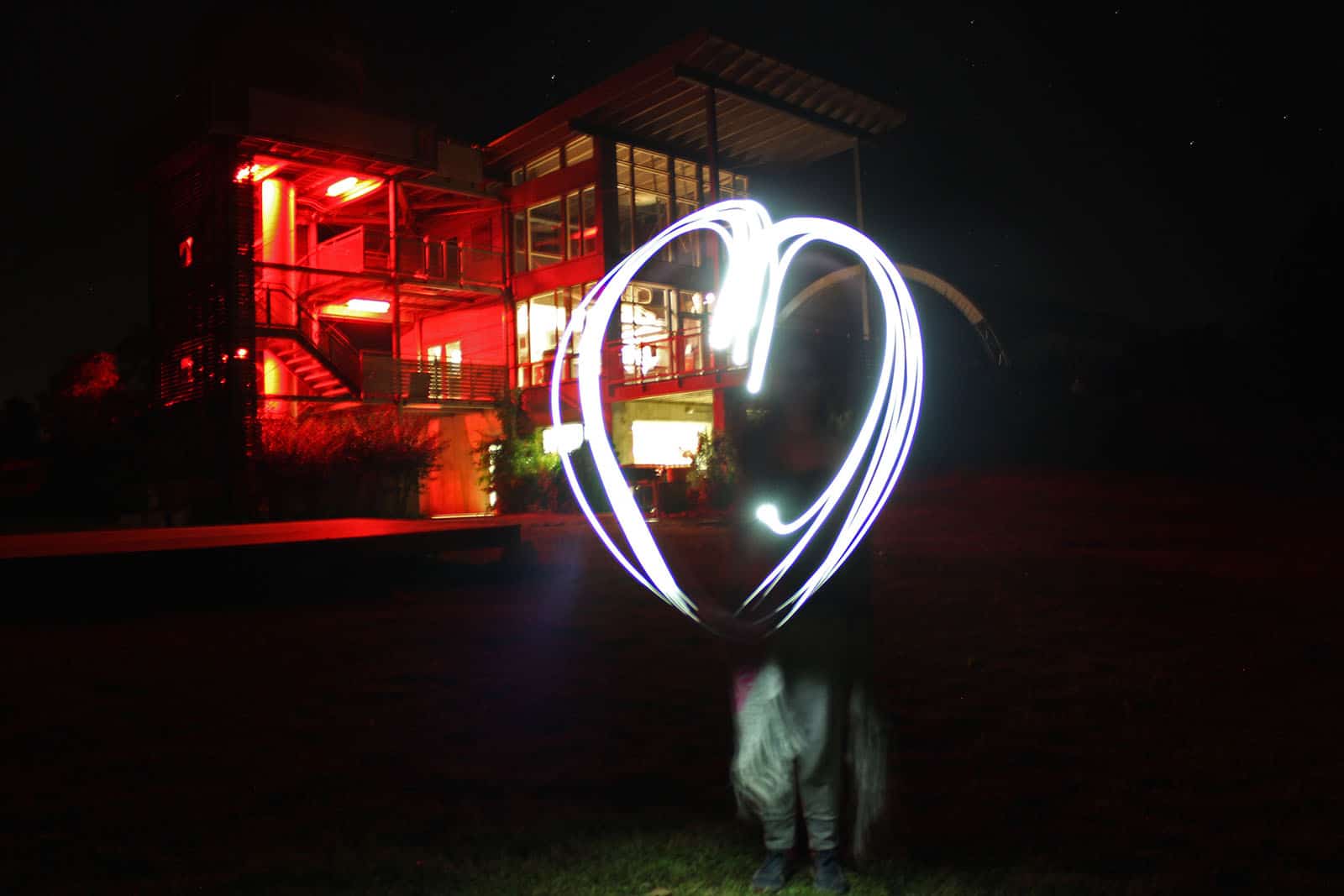 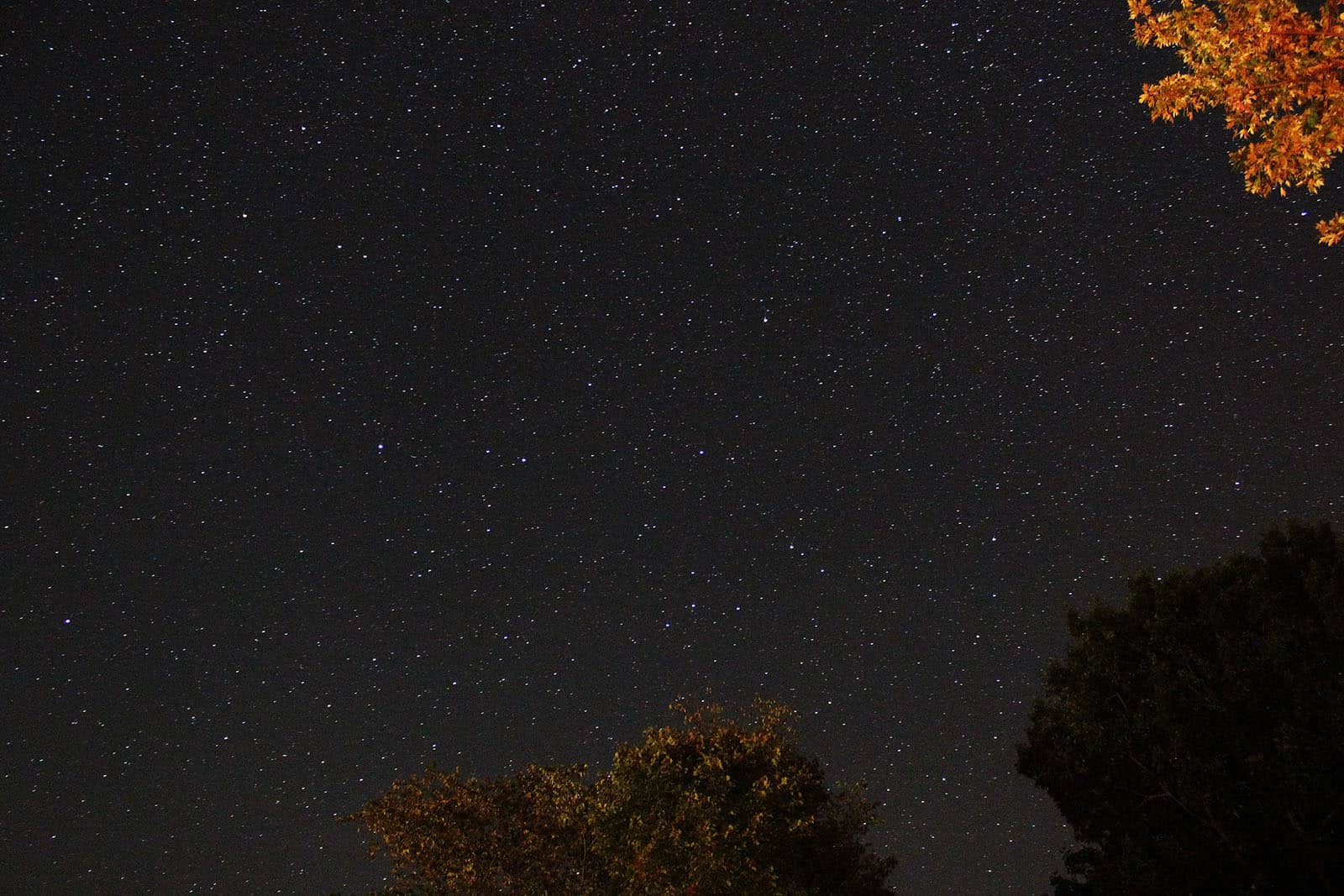 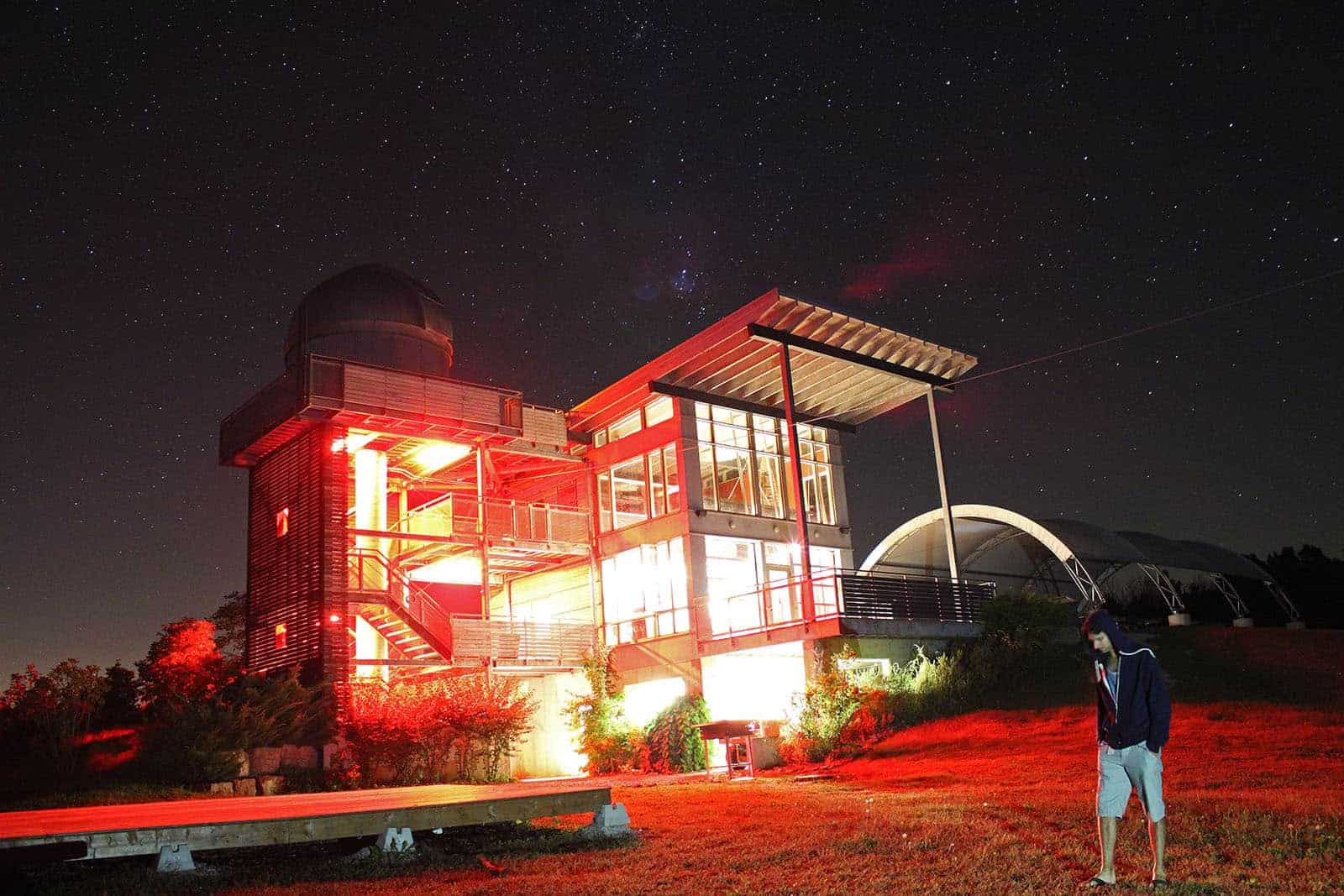 We fell asleep to the gentle sounds of the crickets chirping, and woke up to the uplifting melodies of the birds. In the morning, the view of Long Point Bay from our tent was completely shrouded in fog. I walked along the path we took to the bonfire the night before, noticing numerous pretty places that were now visible in the daylight. There were forests with lush greenery, and even more impressive panoramic views of Long Point. Even though I was breathing in the freshest air being far away from the urban centres, I wasn’t far from modern luxuries. A freshly brewed cup of coffee was all ready to go in the breakfast tent. This was my kind of camping, indeed. 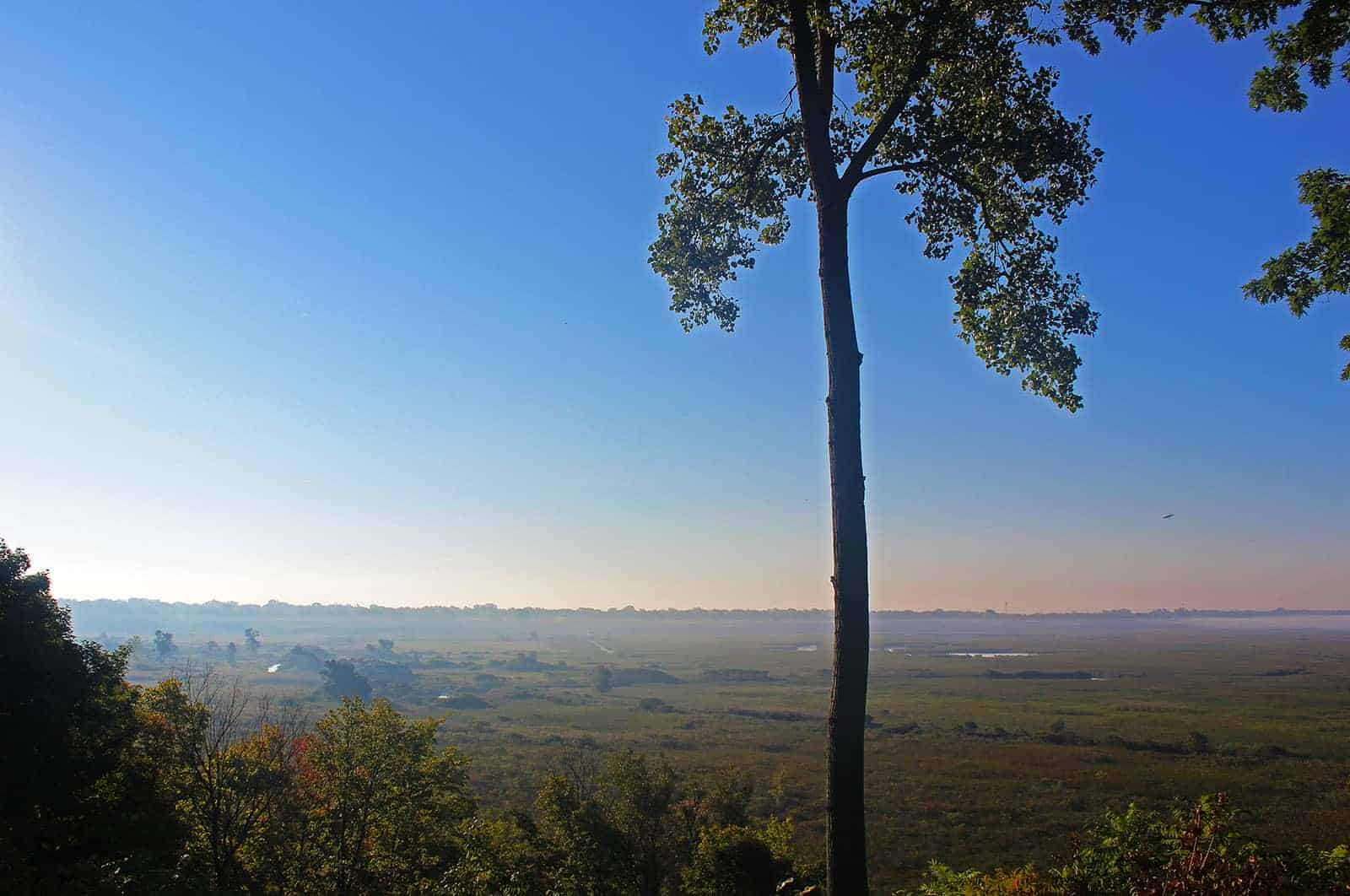 Have you ever tried glamping before? Would you try it?

I own a adventure, overland travel and safari company. Clamping is lovely and I would like to set up a camp with such shelters. I would love to hear from those that have done this before for more inspiration.

I worked for a company that deals with campsite reservations, and they manage booking for such shelters as well, it's pretty amazing, and I'd love to try it one day.

I must say I've never heard the term "glamping" before but now, after reading your post it makes perfect sense! I'm not a huge fan of sleeping in the tent but I actually wouldn't mind spending the night in the place like this. And those night pictures - gorgeous!

Mary{The World Is A Book}

This is neat! I've never gone camping and I don't ever feel the need to. But, I do love the outdoors.So, this is a great solution. I wish we had one nearby now. Glad you both enjoyed it.

Glamping is very "hot" in Europe so I had heard of it before. I think it comes to various levels, glamping like you guys did seems awesome because it's comfy yet not too much like at home. I've "glamped" once which was recently, it was a cabin at a campsite, however there was a regular bed and kitchen so not sure if it was actually glamping. I'm still a sucker for back to basic camping mostly though :-)