Searching for Lions: A Kenya Night Safari - Justin Plus Lauren Skip to Content 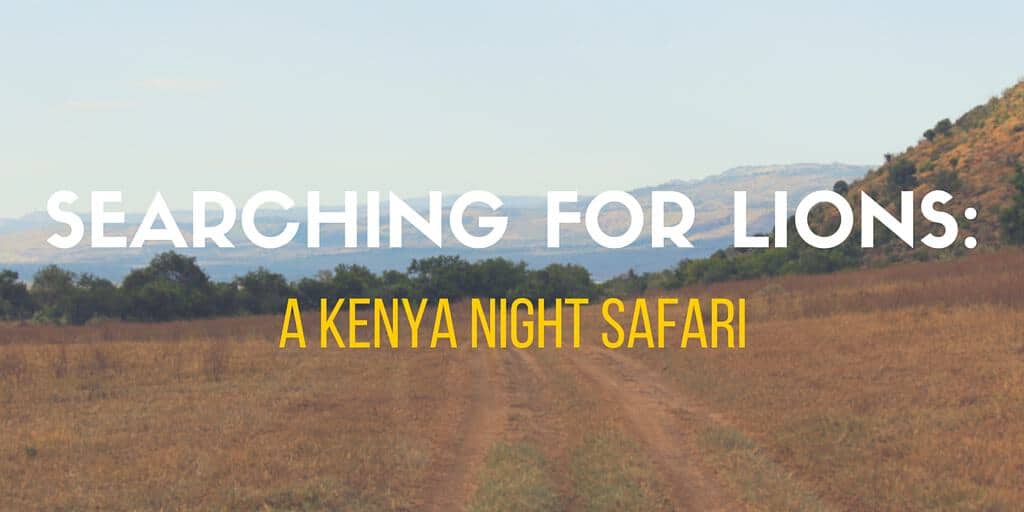 And now, the screams of shrieking pigs were infiltrating my eardrums.

We spent the afternoon at the Soysambu Conservancy Raptor Centre. Our small team of four volunteers met the owner and operator, Simon Thomsett. He’s not only an expert on birds of prey, but he also rescues and rehabilitates raptors. Simon is frequently featured in National Geographic as both a photographer and vulture expert. He warmly welcomed us to his home at the Raptor Centre, a small collection of mud huts and tree houses that he built himself. As a special treat, Simon asked if we wanted to find the lions. 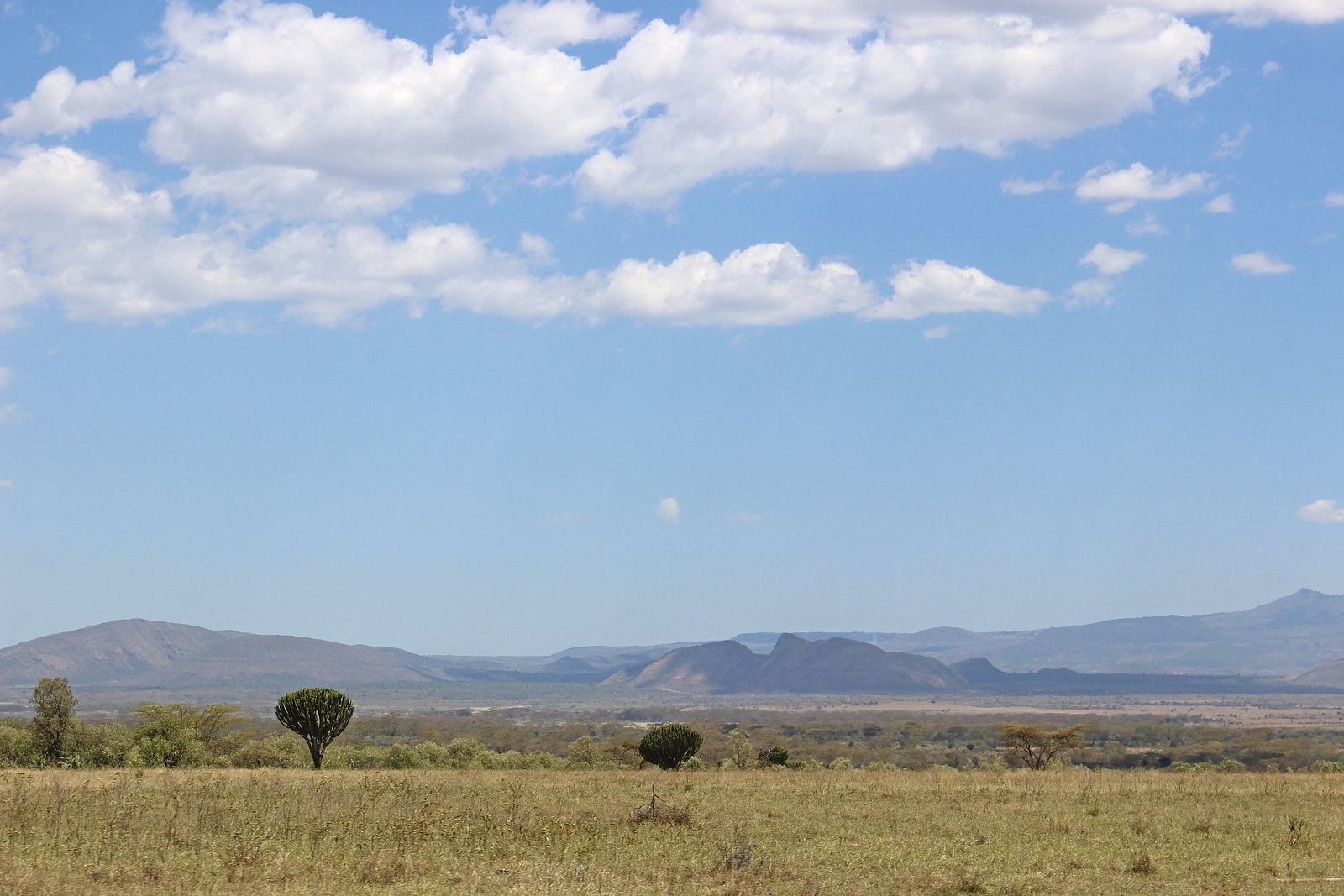 Eight lions call Soysambu Conservancy home – there are two mother lions and their six cubs. The female lions wandered onto the property a couple of years ago and gave birth to their cubs. The cubs are nearly full grown, yet they are still young enough to live with their mothers in their pride. It’s a great sign that the population of Africa’s apex predator is steadily growing. The wildlife at Soysambu is flourishing. However, the lions are presenting one problem: they are killing all of the cattle.

Yes, Soysambu Conservancy is the site of a prosperous cattle ranch. Many wildlife conservancies in Kenya were once livestock farms in colonial times. In many instances, the two operations find a way to co-exist. At Soysambu, the cattle ranch provides a substantial source of income and work for the local residents. In an ideal situation, the wildlife conservancy would contain only endemic animal and plant species. It’s a careful balancing act between protecting the ecosystem and the Kenyans’ livelihoods.

The lions discovered that these roaming herds of cattle make quite the tasty treats. There is a huge loss of income every time a cow is killed. To protect the livestock, the two female lions were outfitted with GPS tracking collars. The movements of the lions and their cubs are consistently monitored. Soon, instruments will be installed at the cattle ranch. When the lions are close, an alarm will alert the herdsmen. He’ll be able to make noise to scare the lions away. 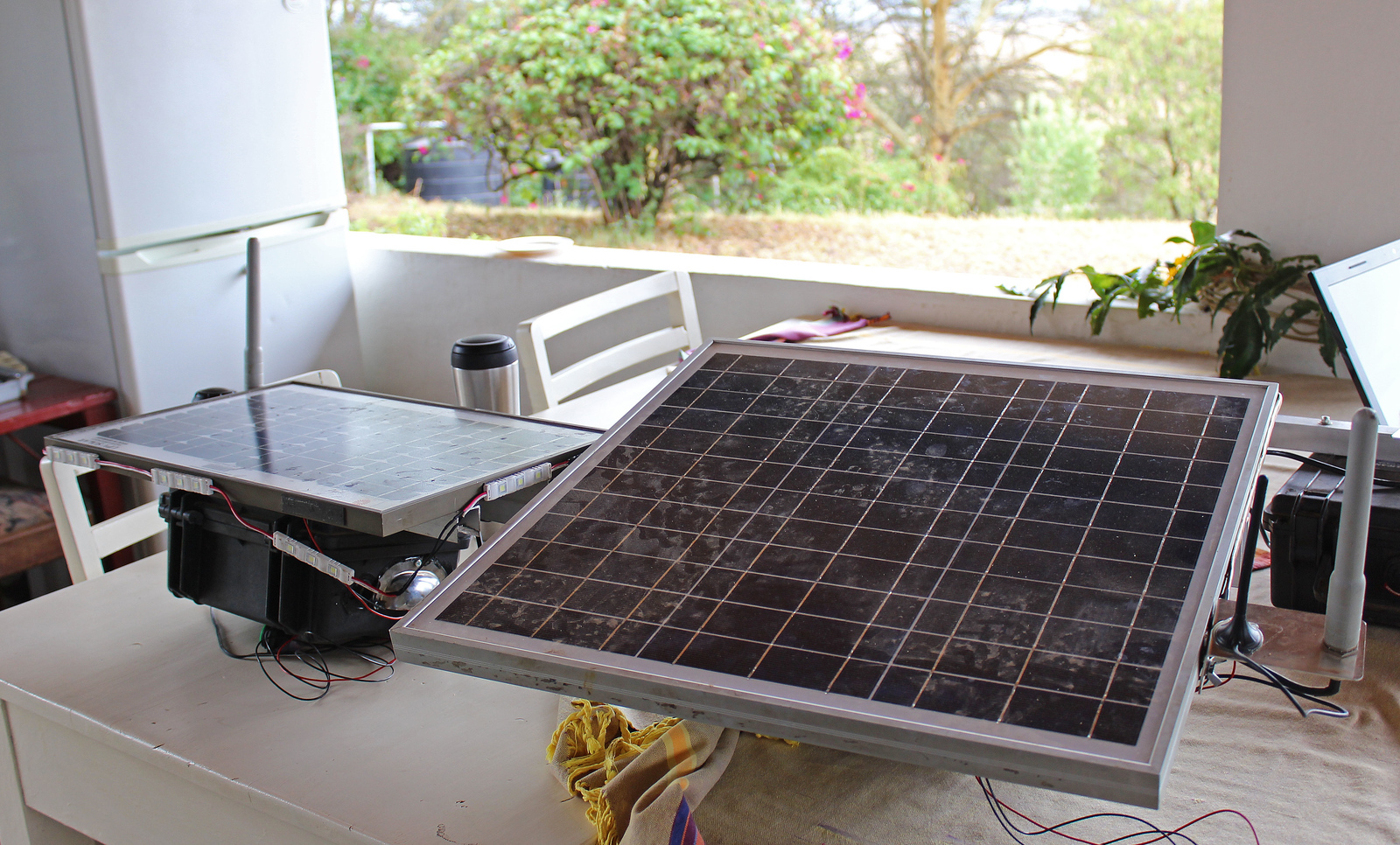 Instruments to be installed at the cattle farms

For our group’s purposes, the GPS collars provided some insights to the whereabouts of the lions. While the software isn’t completely up to date, Simon had an idea of where the lions could be. Keep in mind that Soysambu Conservancy is not a small plot of land; it’s nearly 40,000 acres.

It’s easiest to find the lions at night. They are generally more active in the evening. Lions hunt at night because they can easily attack their prey in low light conditions. Lions can see better at night than many other creatures, giving them a big advantage. We departed at dusk in search of the lions. It’s a rare experience to take a Kenya night safari and I immediately felt grateful. 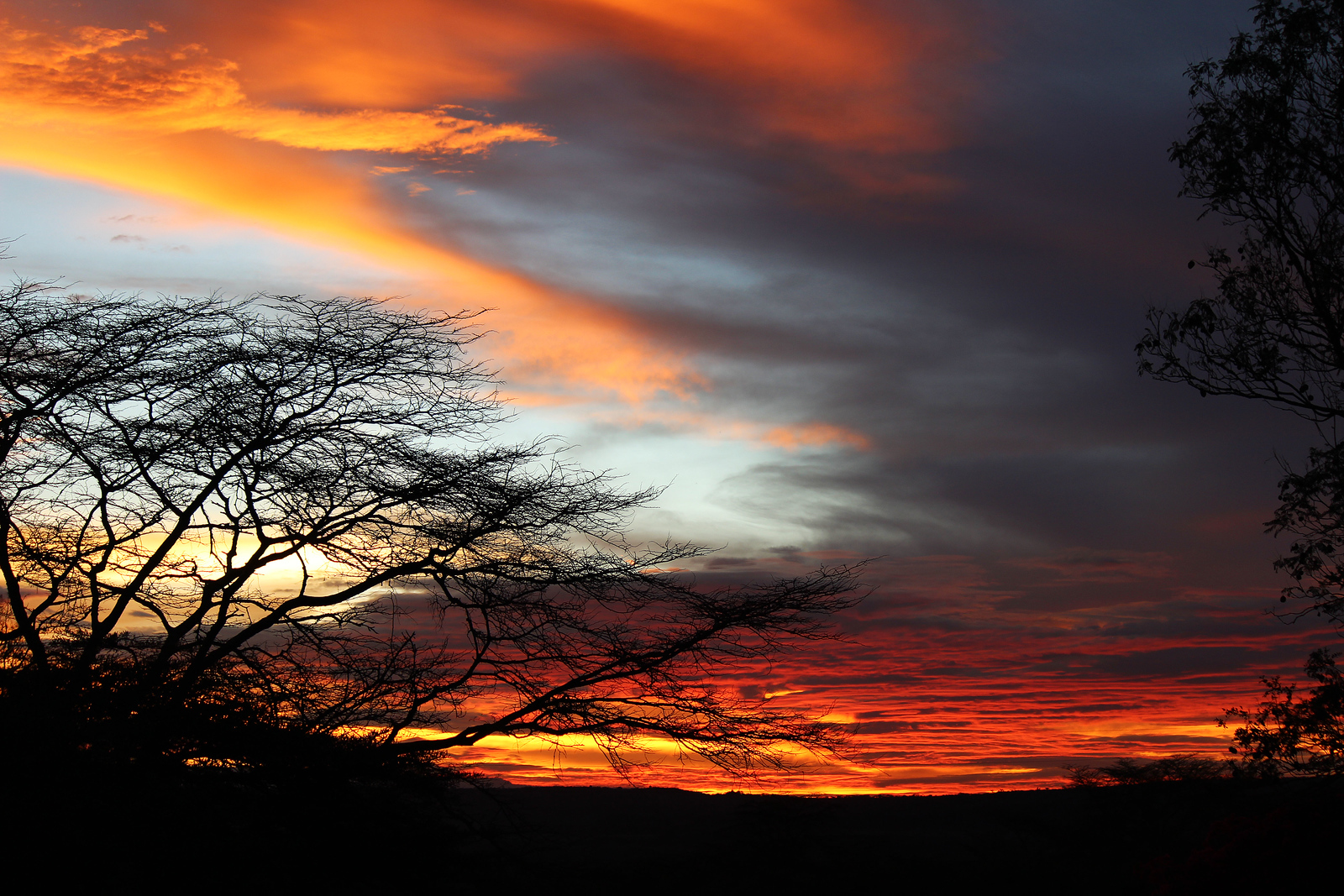 In Simon’s vehicle, we drove from the Raptor Centre to the last known whereabouts of the lions. On the way, we got a flat tire. This is a fairly common occurrence on these bumpy gravel roads in the country. The streets in Kenya aren’t known for providing the smoothest ride. Thankfully, we were on a main road and not in the middle of the bush. We definitely weren’t looking to be attacked by buffalo twice. By the time Simon switched out the tire for a spare, the sky had grown dark.

After driving for at least a half hour, we were near the suspected location of the lions. Simon veered off the road. For the majority of our night safari, we were off-roading across the grasslands. One volunteer, Marilyn, kept a close watch out for potholes and warthog dens from the front seat. The car could get stuck or severely damaged if we dipped into one of those. Simon handed off a giant spotlight to Nora, the leader of our volunteer expedition. The roof was wide open to the night sky. Nora stood and shined the spotlight from the top of the car.

We had one important instrument to view the lions and other wildlife. Simon borrowed a night scope from the British military. It was a tool used by snipers with a powerful night vision capabilities. “Be careful with this,” Simon stated as he passed the night scope to myself and Nora’s mom, Rena, in the backseat. “It’s worth about £50,000.” 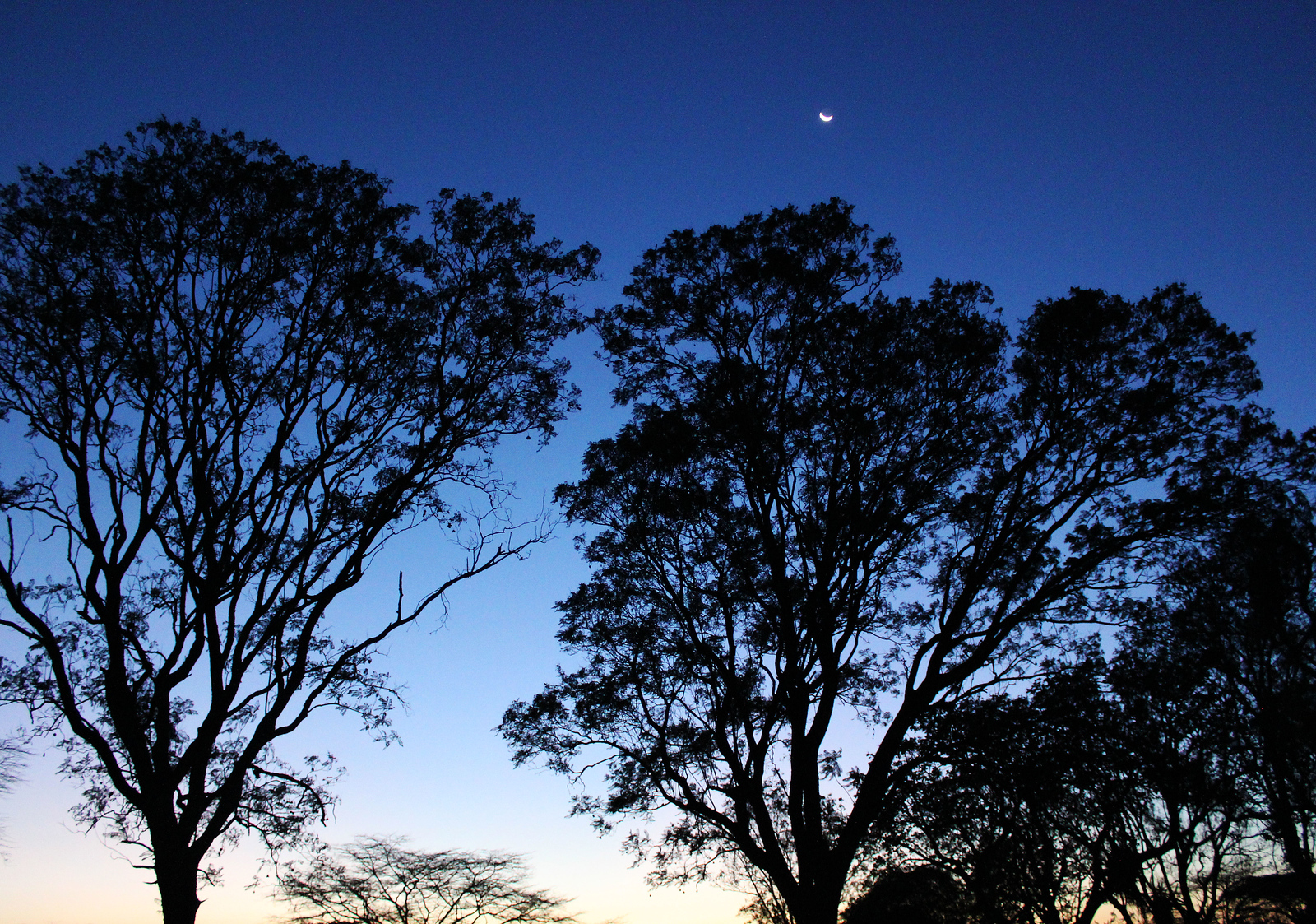 We searched and searched for hours, with no trace of the lions. Simon brought a special “mix tape” along for the ride. From his car speakers, he blared animal calls in an attempt to attract the lions. We alternated between the sounds of cows mooing, hyenas cackling, and pigs screeching. These noises were played at a maximum volume, piercing our skulls. Still, no lions emerged.

“They’re getting used to these sounds,” Simon explained.

It was getting late. We decided to call it a night, turn around, and go back to the Raptor Centre. The lions were nowhere to be seen. For one last effort, Simon drove down a main path where the lions had visited in the past. Nora splashed the beam of light outside of the vehicle, into the forest. All of a sudden, we saw pairs of eyes. Then, entire bodies. The lions were in plain sight, right beside a frequently traveled road! Nora quickly turned off the light. We didn’t want to disturb them. The five of us took turns passing around the night scope, observing these magnificent beings.

I gazed through the scope. I counted the lions. One, two, three…four, five, six…where were two of the lion cubs? Suddenly, one poked his head up, and then the other. Two of them appeared. They were scratching and digging at something in the ground. The cubs were disappearing and reappearing from inside a small hole in the ground. What were they doing?

Examining the Scene by Daylight

The next day, we drove around the conservancy to several spots where the lions were the night before. We searched for signs of the lions, namely bones. At last, we reached the place where our team had viewed the lions. We found many bones, both old and fresh. These belonged to some poor gazelles that didn’t win the footrace. Clearly, this was one of the pride’s favourite places to hang out. We found the hole in the ground where the lion cubs were digging. As it turned out, it was a warthog den. We could see the fresh scratch marks. Those two lion cubs were probably harassing some poor warthog, trapped down in his lair. 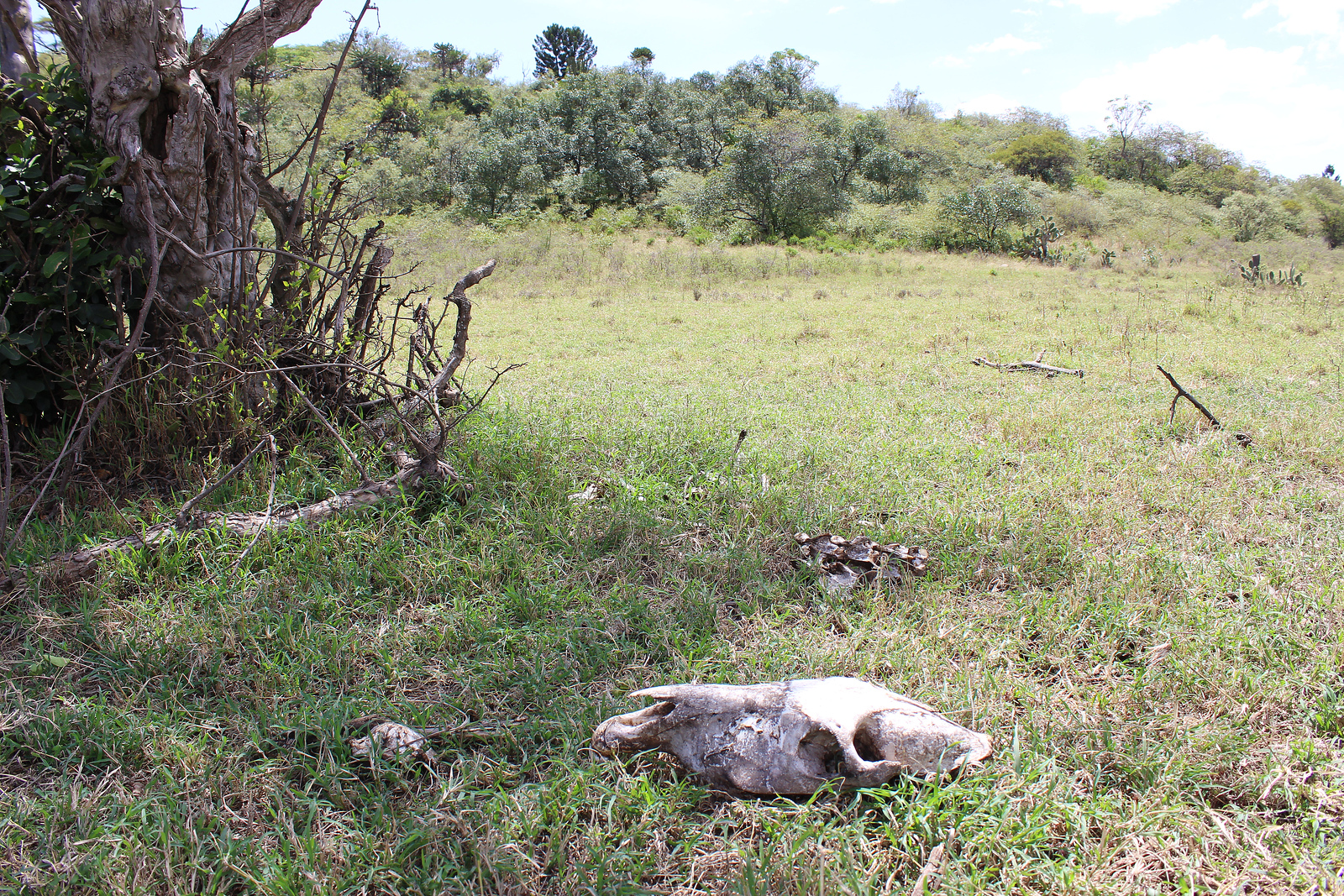 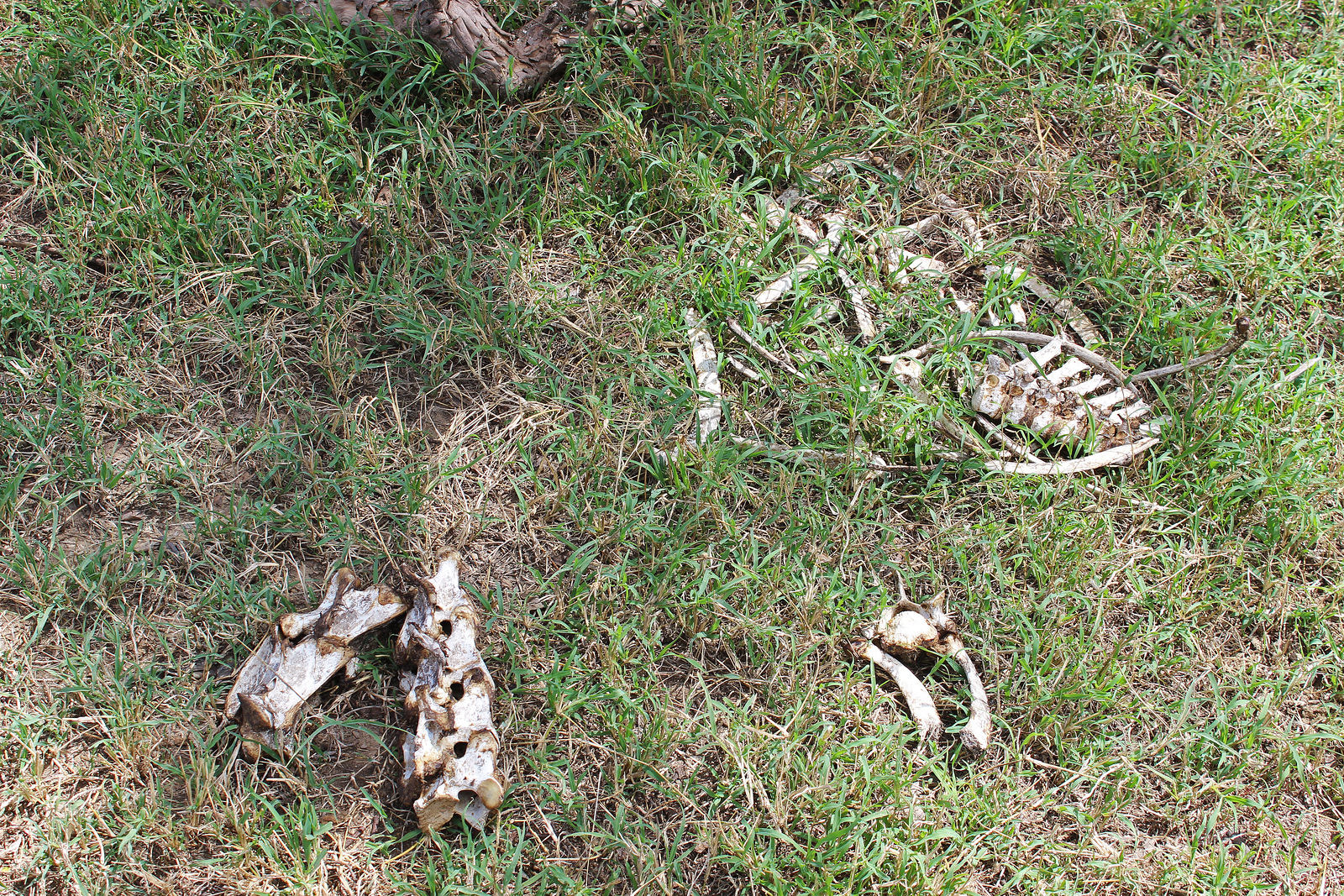 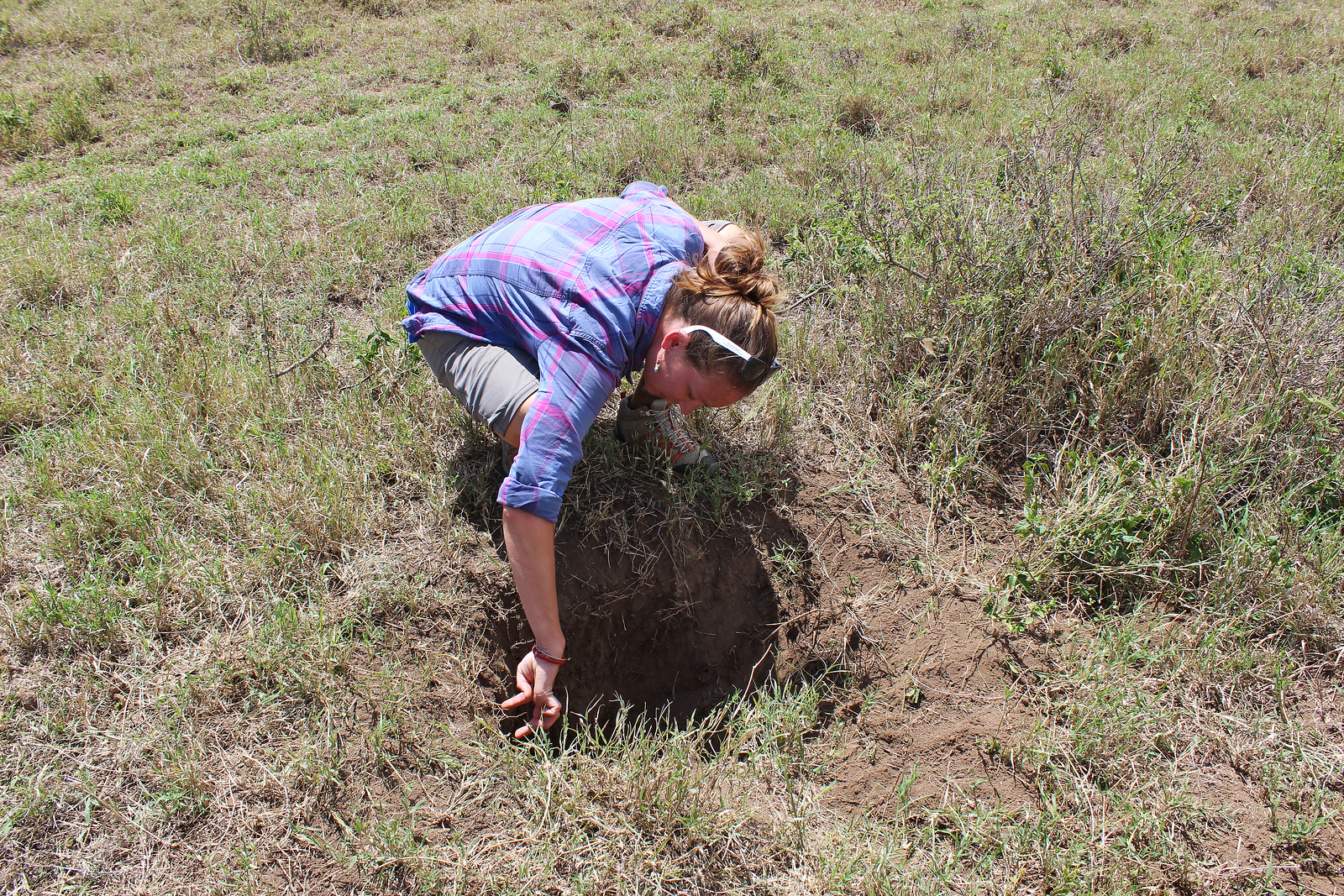 I wasn’t able to capture any photos of the lions at night. But, it didn’t matter. It was one of those rare, breathtaking, exhilarating, fleeting times. I was happy to be fully enraptured by that moment.

Night safaris aren’t as common for tourists. We were lucky to have this experience at Soysambu Conservancy through our volunteer expedition with Animal Experience International. Through their placement programs, volunteers can visit Soysambu all year long. We worked and volunteered to help wildlife for most of the time, though we were treated to special surprises by Nora of AEI and those at Soysambu. Thanks so much to Simon Thomsett, not only for welcoming me into your home, but taking me on such a wild adventure. 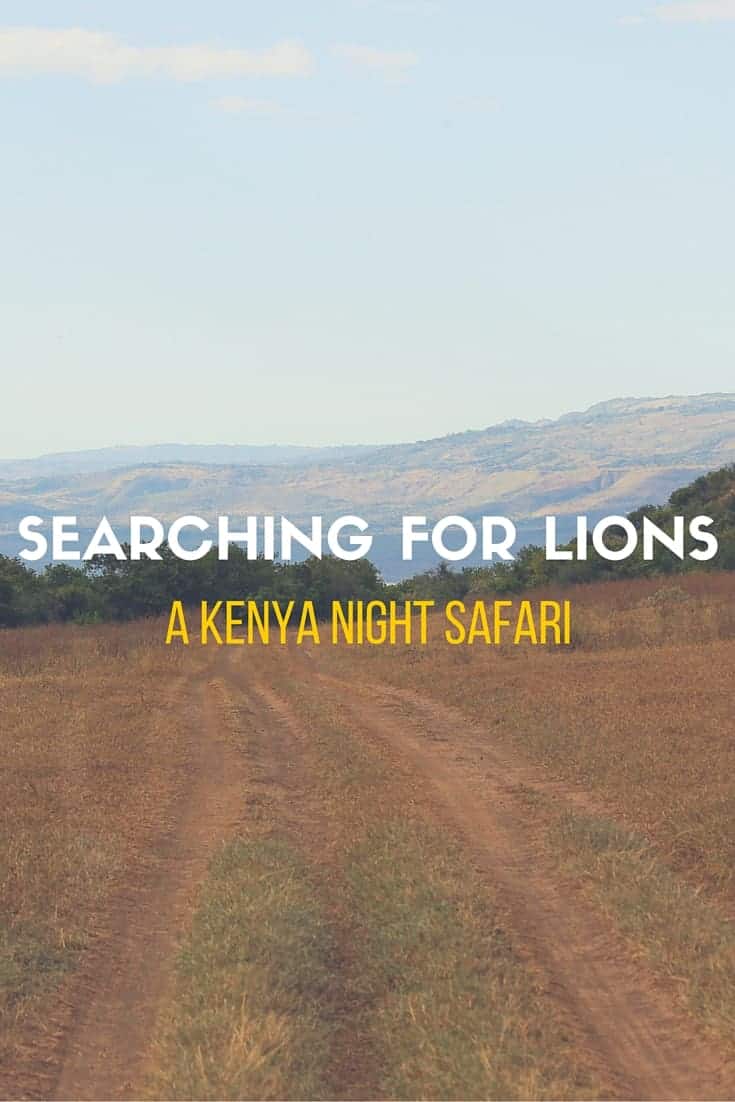 Want to read more about my adventures in Kenya?

Have you ever gone on a safari? How about a Kenya night safari? Have you seen lions living in the wild?

Lions and their cubs are adorable. And it's good to know that they're killing off the cattle in some areas. Searching for wildlife the way you desrcibed is always a surprise. You never think its going to happen when it does, but when something cool happens, it is so worth it.

Keep up the good work.