10 Fun Facts About Mauritius That You Didn’t Know 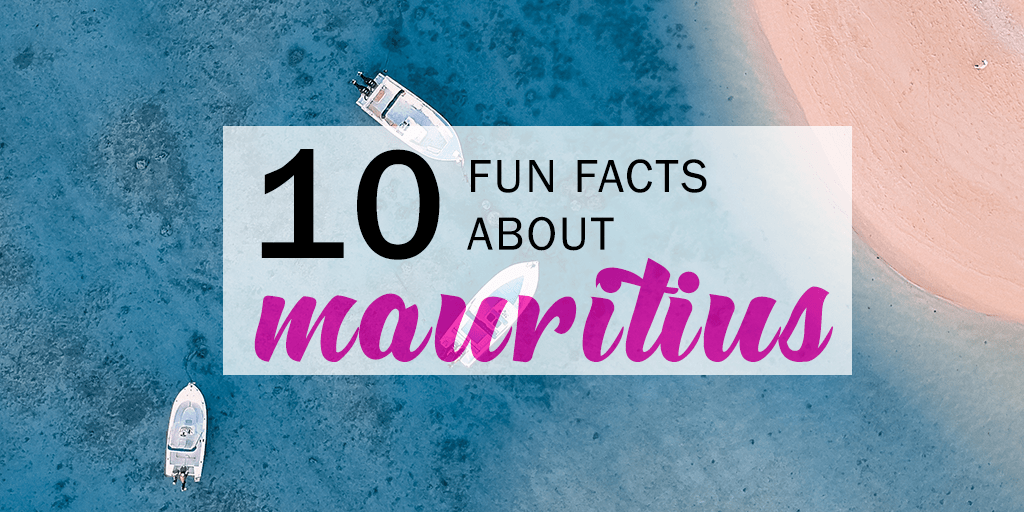 Do you know much about Mauritius? I keep hearing so many wonderful things from fellow travelers who have visited. As a Canadian, Mauritius seems like a dreamy distant place, tucked away in the Indian Ocean. While it remains a dream destination for us (for now!), I couldn’t help but research why so many people fall for this tropical land. The motto of Mauritius is:  L’étoile et la clé de l’océan Indien (Star and Key of the Indian Ocean), and I believe it! Here are 10 fun facts about Mauritius that could potentially convince you to plan your Mauritius trip sooner than later.

This is one fact about Mauritius that I already knew. However, I didn’t realize that the stunning beaches were this gorgeous until I looked up some photos. The beaches in Mauritius are absolutely stunning. If you’re looking for things to do in Mauritius, one easy option is…nothing at all. Put your feet up and relax. Naturally, you could also take a boat tour, go snorkeling, or try a variety of water sports. There are public beaches all over the island, though you can find the best ones at luxury hotels.

You’ll find long stretches of white sandy beaches all over the island. Some popular choices include Trou aux Biches, Île aux Cerfs, Flic en Flac, and Blue Bay, to name a few. There are over 160km of beaches in total, so you certainly won’t have a problem finding one. The north of Mauritius has the best selection of soft, powdery beaches, while the south of the island is great for surfing. Head to the west coast if you’re seeking golden shores and epic sunsets.

Another main reason to plan your Mauritius vacation are the extremely luxurious resorts and hotels. Stay at a beautiful property to heighten your holiday experience. While in Mauritius, your daily life can consist of fine dining, infinity pools, and first class service.

Whether you’re a fan of smaller, boutique hotels or ones with spa and wellness sanctuaries, indulge in a luxury resort when traveling to Mauritius. This island nation makes the perfect destination for a honeymoon or romantic holiday with your favorite person.

The number one industry in Mauritius is travel and tourism as they don’t really have many exportable resources aside from sugarcane. For this reason, hospitality is key and you’ll meet helpful locals and friendly faces throughout your stay. Mauritius Tourism wins prestigious awards annually, including Leading Honeymoon Destination at the World Travel Awards 2018.

Mauritius has a fascinating history as it was repeatedly conquered by the Dutch, the French, and the British. The French brought over slaves from neighboring African nations. Though slavery was abolished by the British in the 1800s, many migrant workers from India and China moved to the country. This resulted in a massive mix of cultures, religions, and ethnicities in Mauritius. This African island nation gained independence in 1968, achieving economic and political stability. To learn more, it’s worth checking out the Mauritius National History Museum at Mahebourg, on the bank of River La Chaux.

The country’s flag has four colored stripes that all have an important significance. Red stands for bloodshed during colonization and the fight for independence (Mauritius celebrated its 50th anniversary in March 2018). Blue represents the ocean and the sky. Yellow symbolizes both the shining light of independence and the bright sunshine.  And lastly, green highlights the island’s lush greenery.

Although it’s a relatively small island nation, it’s home to 2 UNESCO World Heritage Sites. Aapravasi Ghat, in the district of Port Louis, is a property where the first laborers arrived as an experiment to replace slaves. Le Morne Cultural Landscape is a mountain that was once used as a shelter by runaway slaves, and Le Morne is a symbol of the fight for freedom.

Out of all of the interesting facts about Mauritius, its natural wonders are among its most intriguing. For instance, Chamarel is home to The Seven Colored Earths attraction. It’s a geologic wonder where the soil comes in a rainbow of colors across a barren landscape of sand dunes. Caused by erosion and deforestation, it reminds me a lot of the Cheltenham Badlands near Toronto.

There’s also the only underwater waterfall in the world, off the coast of Le Morne. It’s actually an illusion that you can only witness from above. The underwater currents and sand flowing off the edge of the ocean floor creates a dramatic scene. Definitely book a helicopter tour to view this spectacular sight!

While this isn’t exactly an attraction you can visit, I’m including it because it’s just plain cool. An entire lost continent was discovered below the island nation of Mauritius. The ancient continent of Mauritia once connected Madagascar to India. Eventually, when India split apart from Madagascar, Mauritia plunged into the depths of the ocean.

Over the centuries of settlement, slavery, and immigration, the island has a diverse population of African, Indian, Chinese, French, and more. English is the official language in parliament, though there isn’t really an official language. Most Mauritians speak many languages, including French, English, Mauritian Creole, Hindi, and others. Hinduism is the most popular religion, but other faiths like Christianity, Islam and Buddhism are also followed. I love that so many cultures can live together peacefully.

As you can imagine, this mixture of faiths and cultures influences the architecture, music, and food. Discover Hindu temples, fragrant spice markets, and crumbling buildings that are remnants of colonization. There are so many things to do in Mauritius that involve immersing yourself in the local culture and cultures from around the world.

The main style of music is called Sega, an expression of liveliness and joy. Participants generally improvise, singing in Creole with great emotion. People play several traditional instruments, like the maravanne (rattle), moutia (hand drum) and ravanne (goatskin drum). In dancing, the feet never leave the ground, but the entire body moves with the music.

Mauritius is surrounded by the world’s third largest coral reef, the Saya Del Malha. It’s one of the best places on earth for snorkeling and scuba diving, with over 100 dive sites. You can explore and discover ancient shipwrecks, hundreds of species of fish, and vibrant corals. Swim alongside eels, stingrays, and barracuda. Two popular Mauritius points of interest include Blue Bay Marine Park and La Passe Saint Jacques. The best time of year to dive or snorkel is between November and May when the water is calmest and clearest.

From intriguing facts about Mauritius and its underwater territory, there’s so much to explore on land, too. Though home to so many impressive beaches, topping my list of things to do in Mauritius is hiking the mountains.

Yes, there are so many lush, green mountains all over the island, too. Some of the best day hikes are at Black River Gorges National Park where you can admire astounding views, endemic wildlife, and a beautiful waterfall. You’ll see green wherever you look, whether it’s along a forest path or views of the sugarcane farms.

If climbing mountains is your jam, you have several to choose from: Le Morne Mountain in the southwest, the Moka Mountains in central Mauritius, or the island’s highest mountain, Little Black River Peak at 828 meters.

Listing more fun facts about Mauritius, the dodo bird is their national symbol because it used to live in abundance on the island. While you sadly won’t see any dodos nowadays, the island still has many rare species of birds and over 700 indigenous plants. If you’re interested in viewing unique flora and fauna, check out Île aux Aigrettes, a small island to the southeast of Mauritius. You’ll find giant tortoises, wild orchids, pink pigeons, and more. The island of Rodrigues, a 90 minute flight from Mauritius, also has tortoises, expansive forests, and excellent scuba sites.

Did you know that Mauritius has the fourth oldest golfing club in the world? Officers of the British military introduced the island to the sport of golf in the mid-1800s. Nowadays, there are tons of world class golf courses that attract visitors from all over the world. There are many golf courses with amazing scenery, and hotels with golf courses right on the property.

Some favorites include the Golf du Chateau and the Four Seasons Golf Club at Anahita. Even Île aux Cerfs, an off-shore islet and popular day trip destination on the east coast has an 18-hole golf course. While I knew that the island was famous for its beaches, I would have never guessed that my list of fun facts about Mauritius would include golfing trips.

Travel the Island in a Day

But then again, why would you want to? Stay for a while! On the list of fun facts about Mauritius, you can actually drive across the island within about an hour and a half. If one island isn’t enough for you, venture off to several other surrounding islands for even more glimmering waters and soft sandy beaches.

Amber Island has unruly mangroves and quiet beaches, while Flat Island has fantastic snorkeling and Île aux Cerfs has a gorgeous lagoon. You really can’t go wrong when planning your Mauritius vacation.

Do you have any more facts about Mauritius to share? I’d love to hear them! Please let me know in the comments section as I’m itching to learn more. 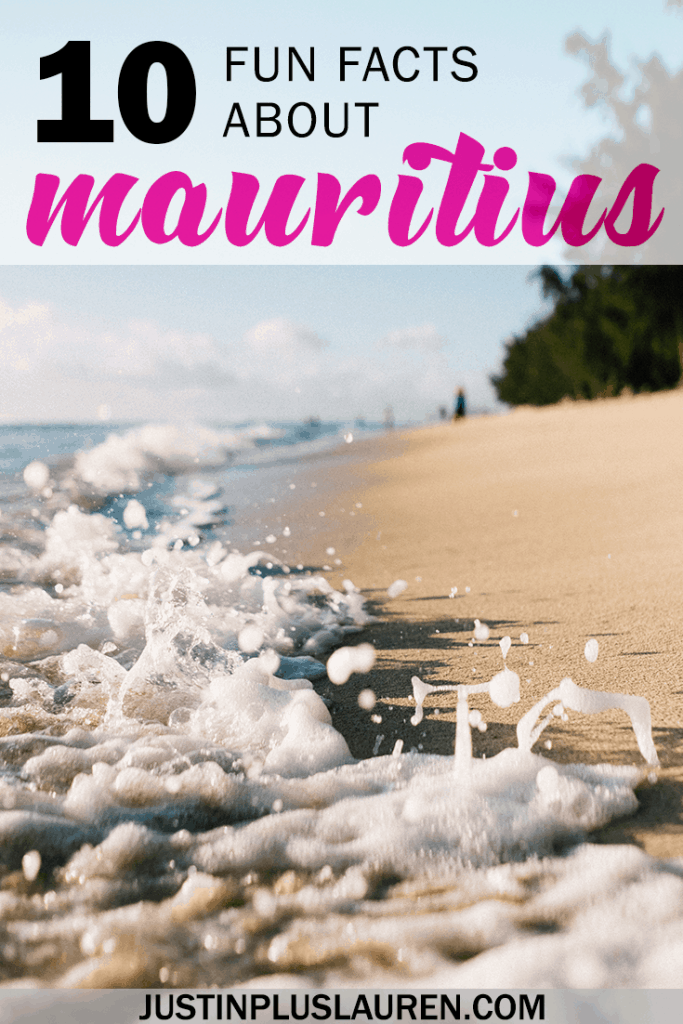 Have you ever traveled to Mauritius? Do you hope to someday?

Christmas Events in Nashville: The Ultimate Guide to Festive Fun
← Previous
The 10 Best Places to See the Northern Lights
Next →
Click here to cancel reply.

Wow, amazing post. I didn't know this about Mauritius!