Animals of Kenya: My Encounters at Soysambu Conservancy 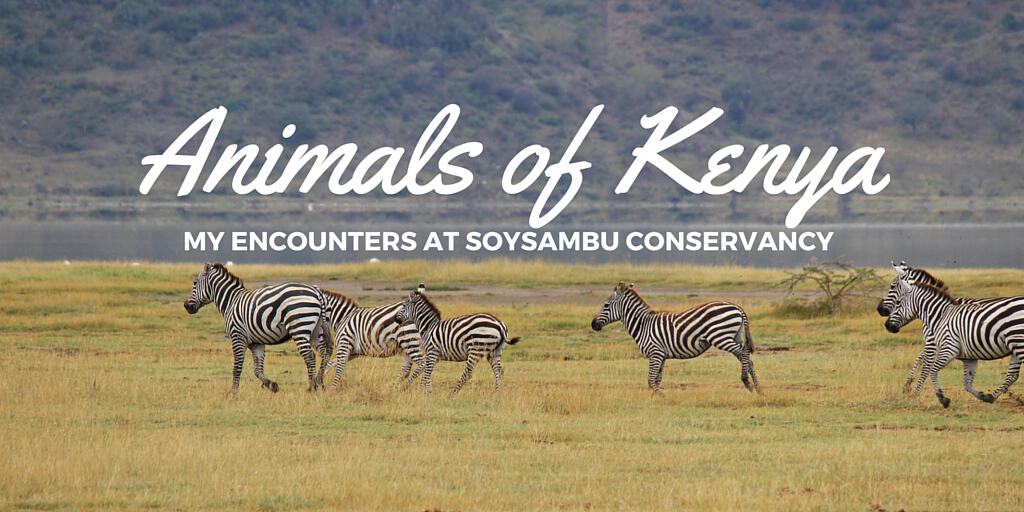 Every day was an adventure. I encountered many African animals during my trip to Kenya.

I may not have discovered “The Big Five”, though I wasn’t on a typical safari. I was volunteering at Soysambu Conservancy in the Great Rift Valley. Even though I wasn’t there simply to see the animals, every day was a safari. Safari means “journey” in Swahili, and this trip certainly was a journey. I was thrilled to see so many animals in Kenya, living wild and free.

Soysambu Conservancy didn’t have any elephants or rhinos, but there were so many interesting creatures living there. I wasn’t able to see any hippos or leopards with my own eyes, though they do live at this 40,000 acre site. The eight lions living there were relatively new to Soysambu. Two females and their cubs moved there within the last couple of years. These apex predators must love the abundance of animals at Soysambu to hunt and eat. Unfortunately, I don’t have any photos of the lions as our group searched for them on a night safari. It was brilliant to see them in the darkness, through a night vision scope.

Many animals are nocturnal, so I only saw them at night. At one point, our car was surrounded by hungry hyenas. I saw several mongooses lurking around for their next kill. And have you heard of spring hares? They look like a combination of a rabbit, a chinchilla, and a little kangaroo. Spring hares have a long tail and they hop! I found a video online featuring these adorable little guys bouncing all over the place.

So, what animals did I see and photograph? Here are the animals of Kenya that I encountered at Soysambu Conservancy.

Zebras were the most common sight at Soysambu Conservancy – over 4000 of them live there! We wouldn’t go far without seeing one, or two, or a massive group. When we were driving on the highway from Nairobi, I remember when our small group of volunteers saw zebras for the first time. From the road, we spotted a few of them walking in the distance. Then, we saw a small herd of zebra standing by the side of the road. I was amazed to see them up close like that. We all grabbed our cameras and started to snap photos from the car window.

Our driver laughed at us. He said, “You’re going to see a million of those while you’re here.”

And he was right. Spotting zebras became so ordinary. With that said, I never got sick of seeing them.

Each stripe pattern on a zebra is as unique as a human fingerprint. Even though they look so similar from afar, you would be able to tell each zebra apart by studying their stripes.

In Swahili, the word for zebra is pundamilia. Fun fact: the animals in the movie, The Lion King, are named after the words in Swahili. So, Simba means “lion” and Pumba means “warthog”. 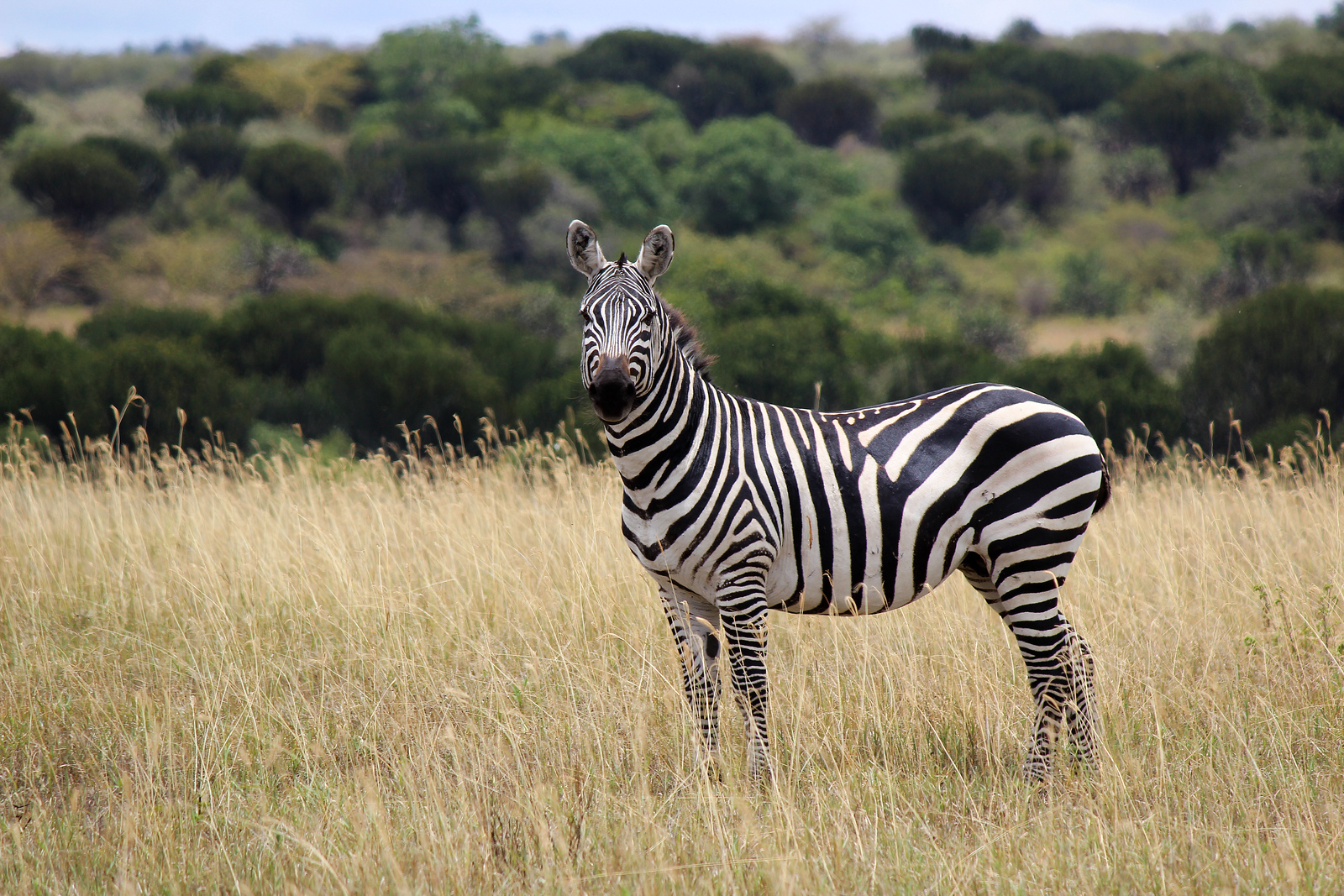 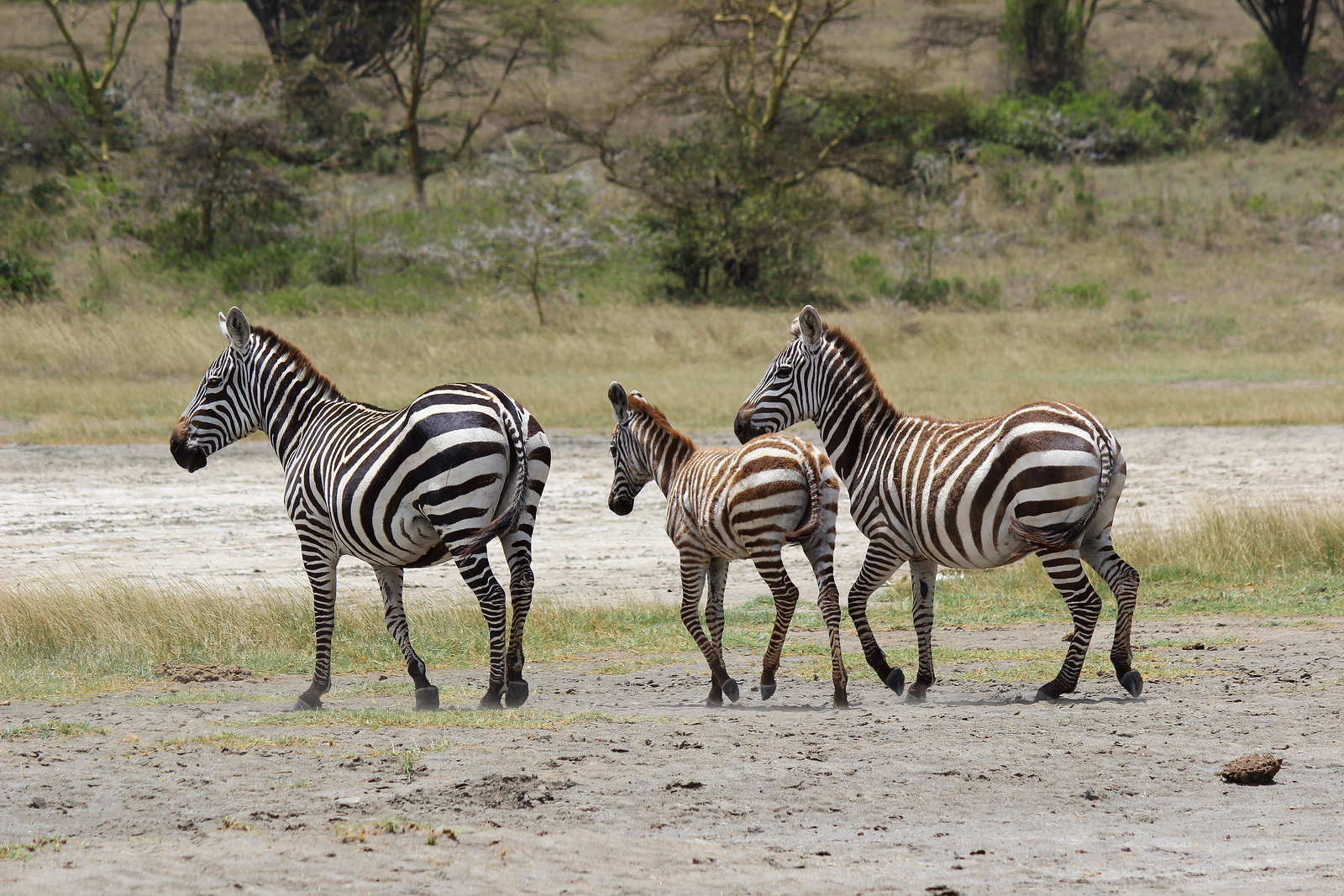 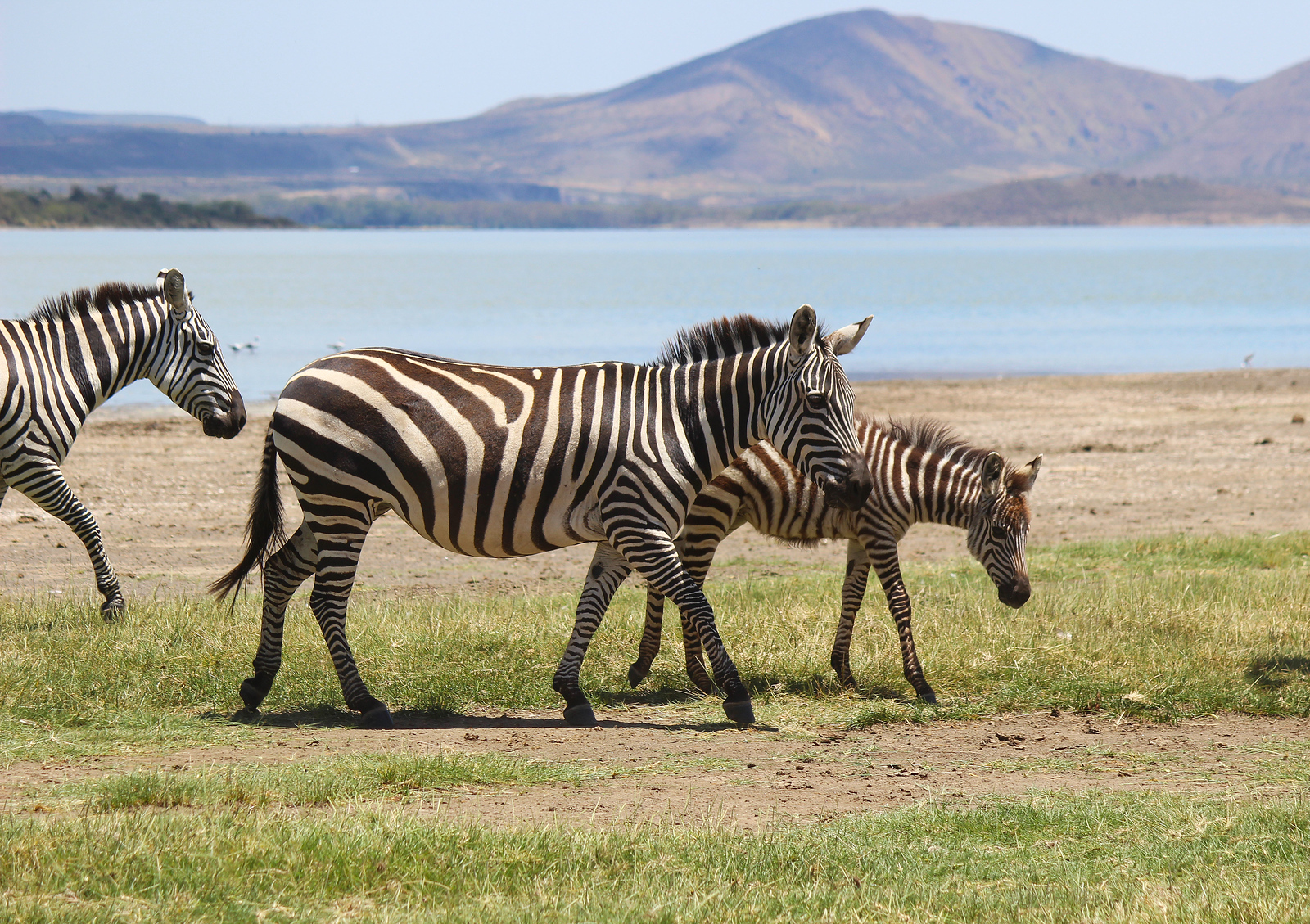 Monitoring the Rothschild Giraffe was one of my main volunteer projects in Kenya. The Rothschild Giraffe is an endangered species and roughly 10% of the world’s wild population lives at Soysambu Conservancy. You can recognize this breed of giraffe by its white legs that resemble knee-high stockings.

We typically saw the giraffes roaming the open grasslands in small groups of 10 to 15. We did see females walking around with baby giraffes in tow. They loved eating the acacias clustered across the vast savannah. With their long necks and rough tongues, giraffes scarf down thorny acacia leaves from tall canopies.

Did you also hear about how I got to name a giraffe at Soysambu Conservancy? I named a two-week old baby Giraffe after my loving partner in crime, Justin.

The Swahili word for giraffe is twiga. 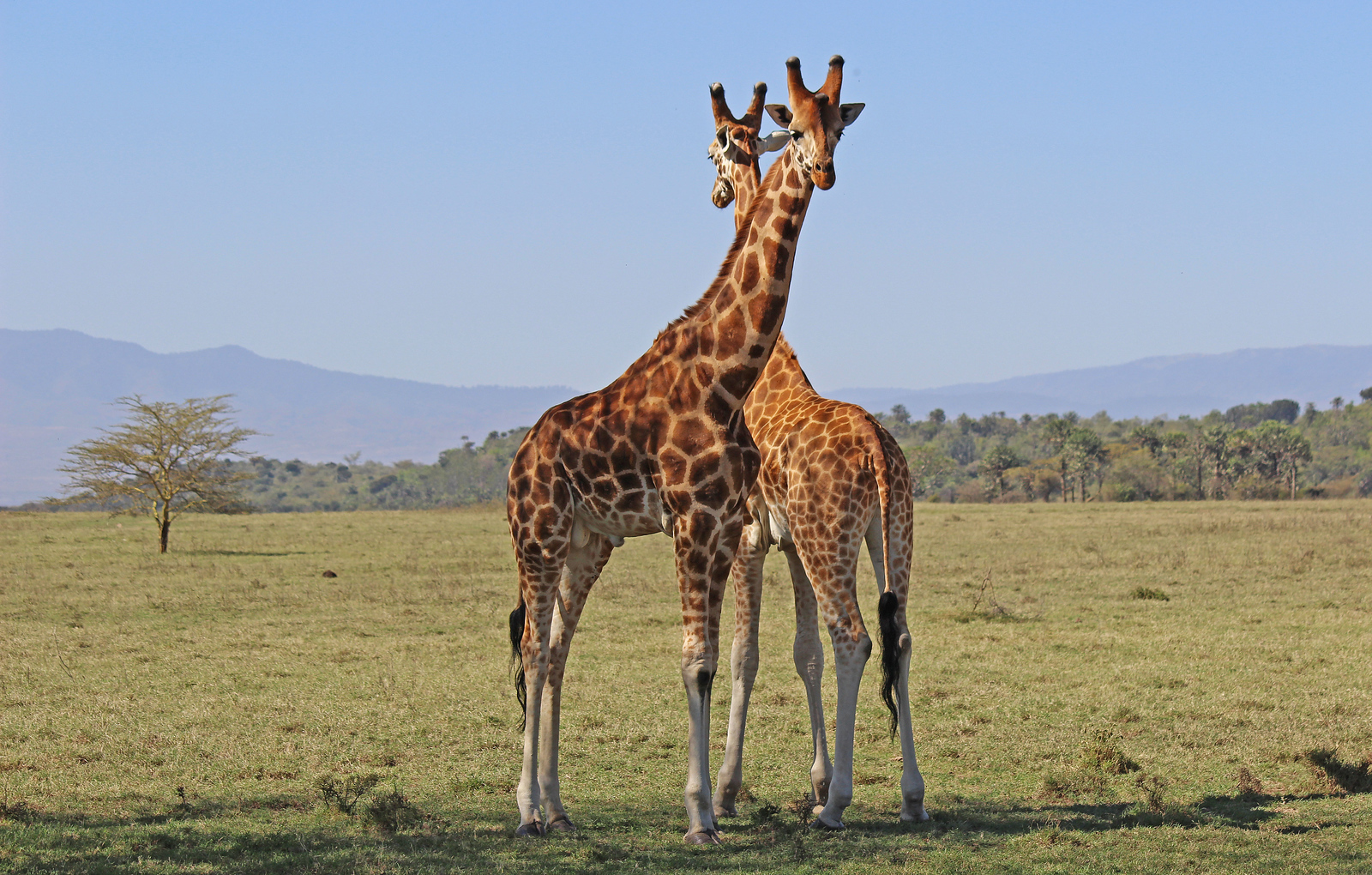 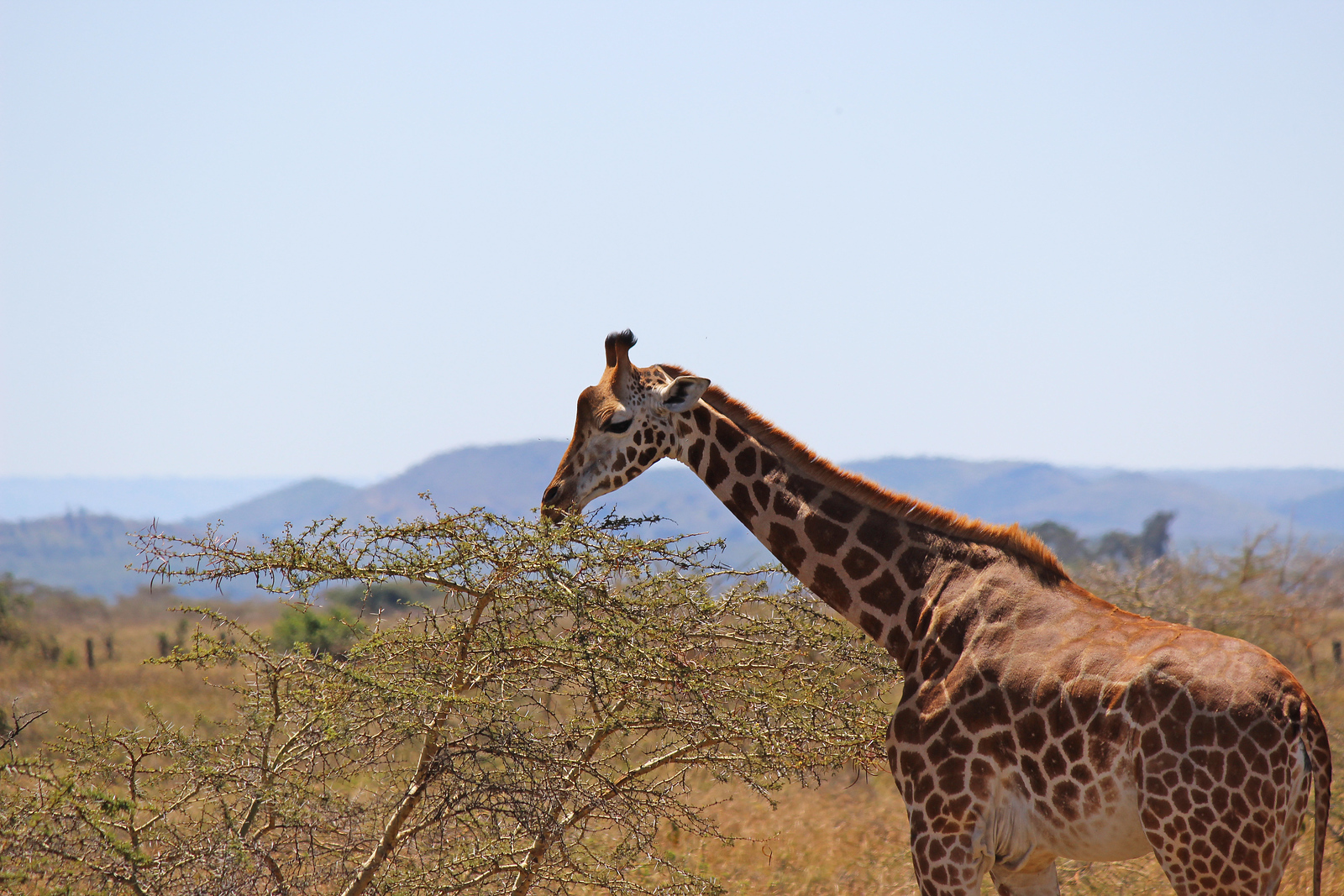 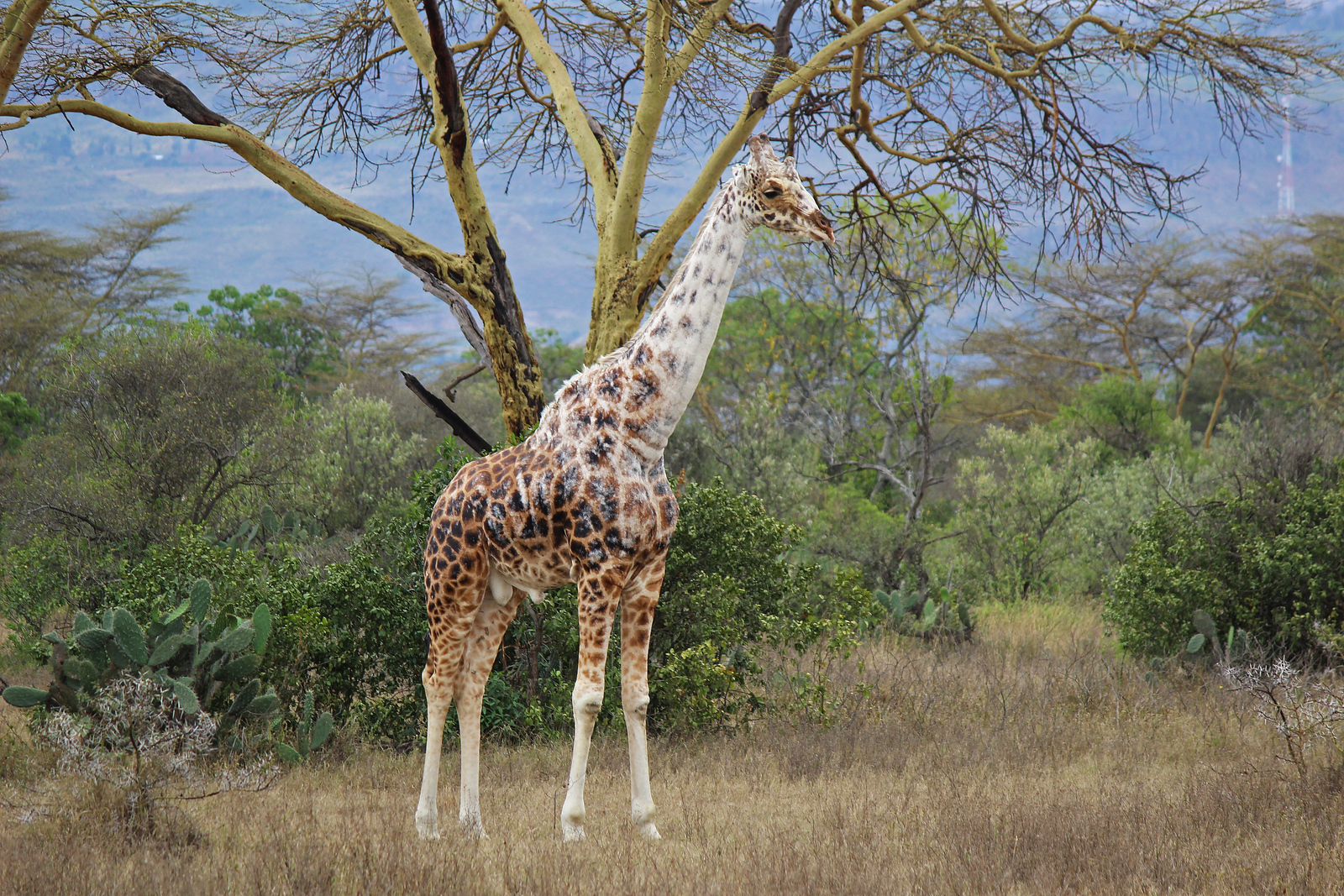 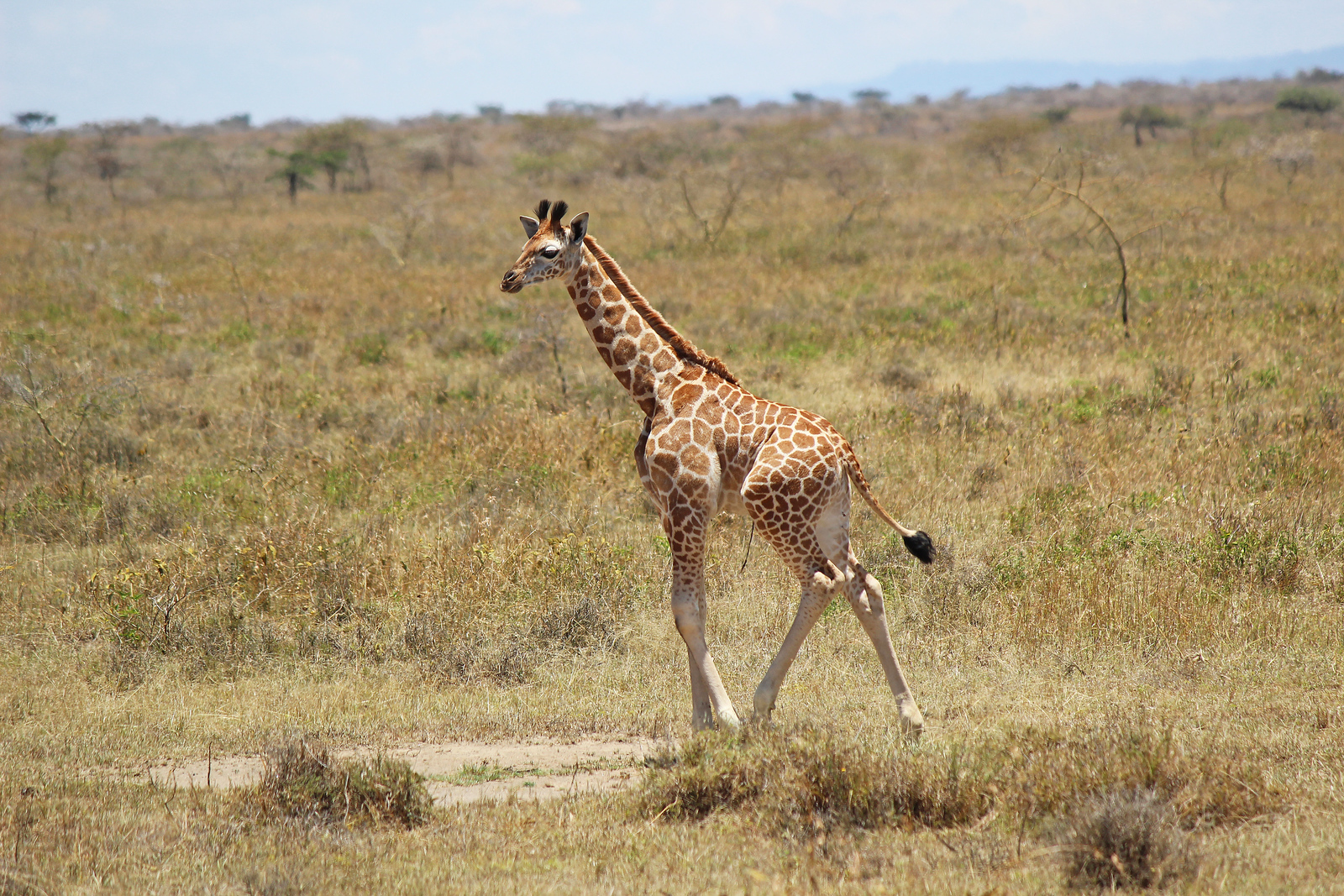 Don’t be fooled, these African buffalo can be the most dangerous animals you will encounter. They are responsible for many human deaths each year. Buffaloes weigh up to 800kg and have huge horns. We usually saw packs of buffalo grazing in the fields and bush. Like many animals at Soysambu, they were interested in us as we drove past, though they kept their distance. Even though they appear calm, buffaloes are notoriously unpredictable when it comes to their temperament. Be careful!

Buffalo in Swahili is either nyati or mbogo. 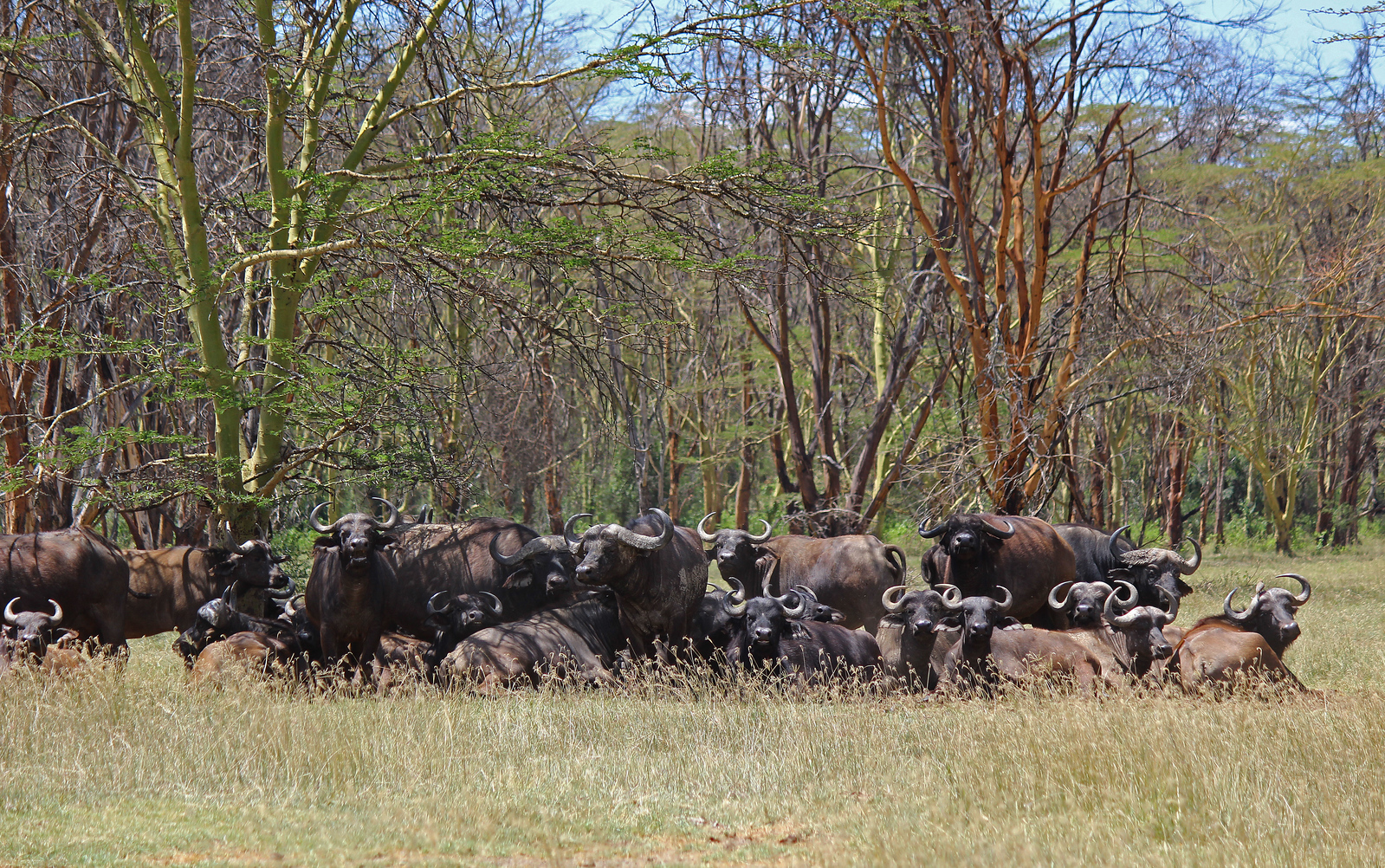 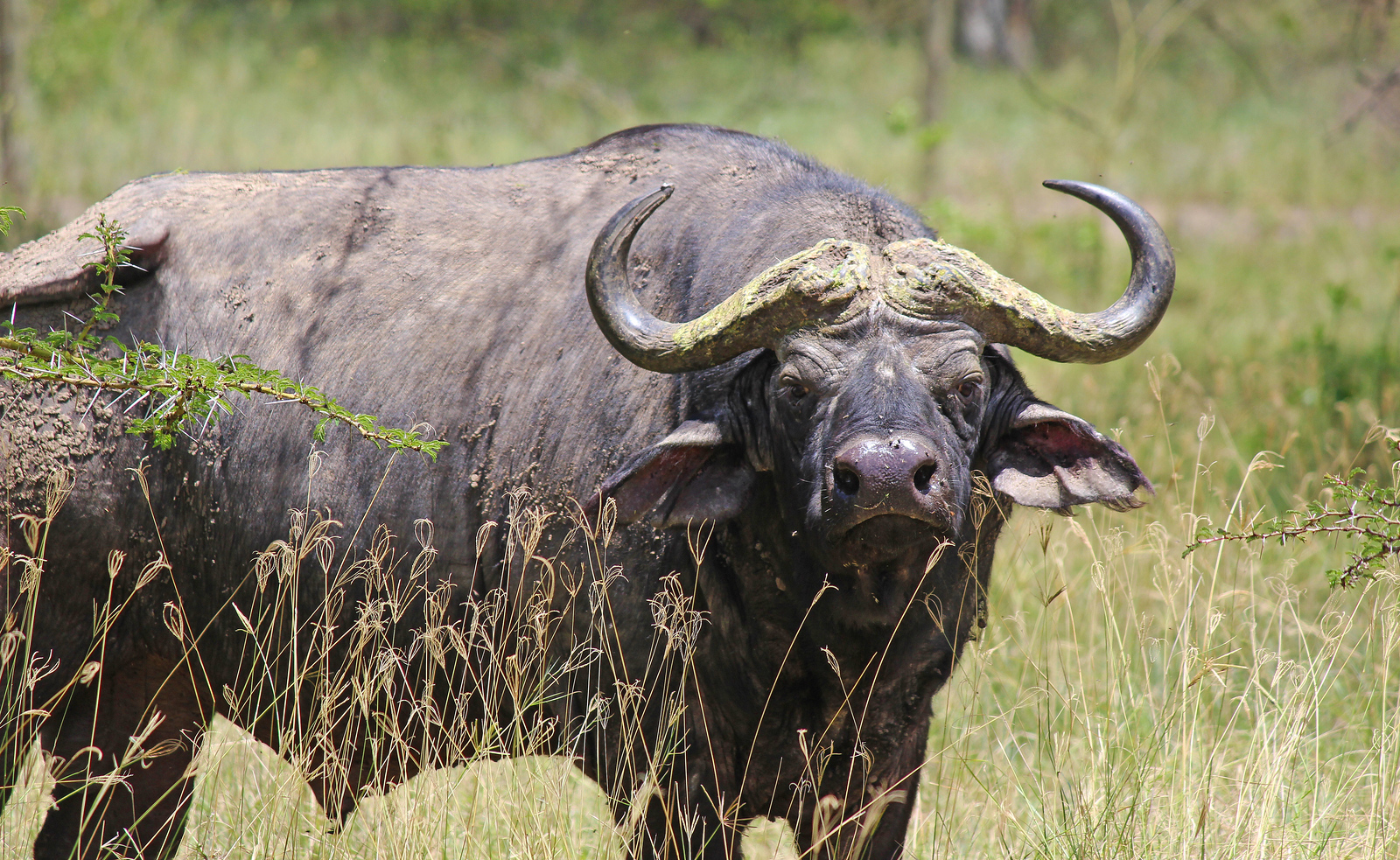 Waterbuck are so cute, especially the baby ones. They are large antelopes, recognizable by their shaggy chestnut coats and white bottoms. The males have large horns. Though we found most of them walking around the grasslands and through the bush, herds of waterbuck can be discovered in the water.

Waterbuck in Swahili is kuro.

Oh, hello, you adorable baby waterbuck with a heart-shaped nose!

The eland is the biggest antelope with spiral-shaped horns. They almost look more like cows than antelopes. The eland is a fairly docile creature, often weighting over 2000 lbs.

In Swahili, eland is pofu. 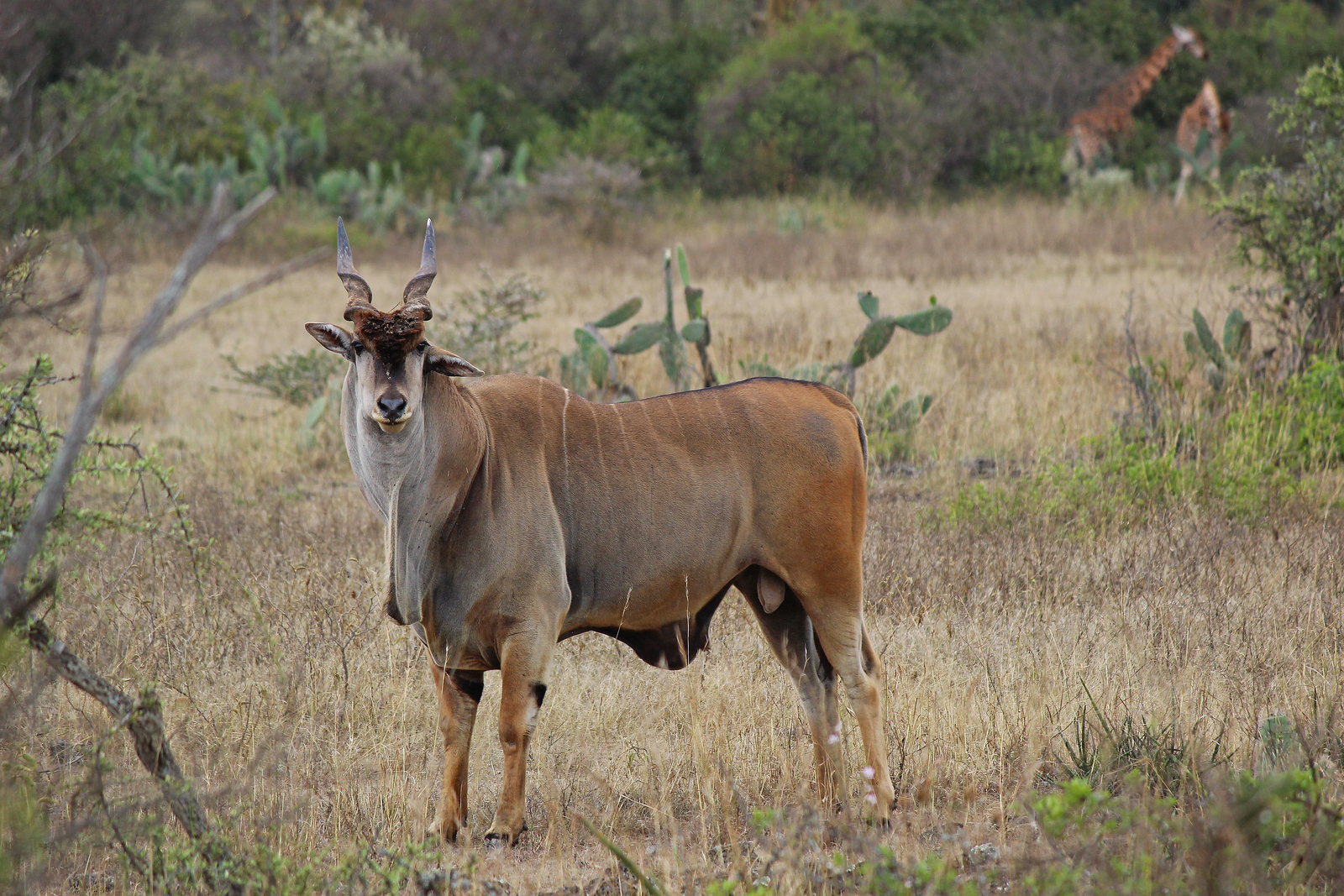 We saw large herds of impalas all over Soysambu Conservancy. They are quick runners and agile jumpers. Males have magnificent long horns. Impalas have a chestnut short coat with black and white stripes on their bums. 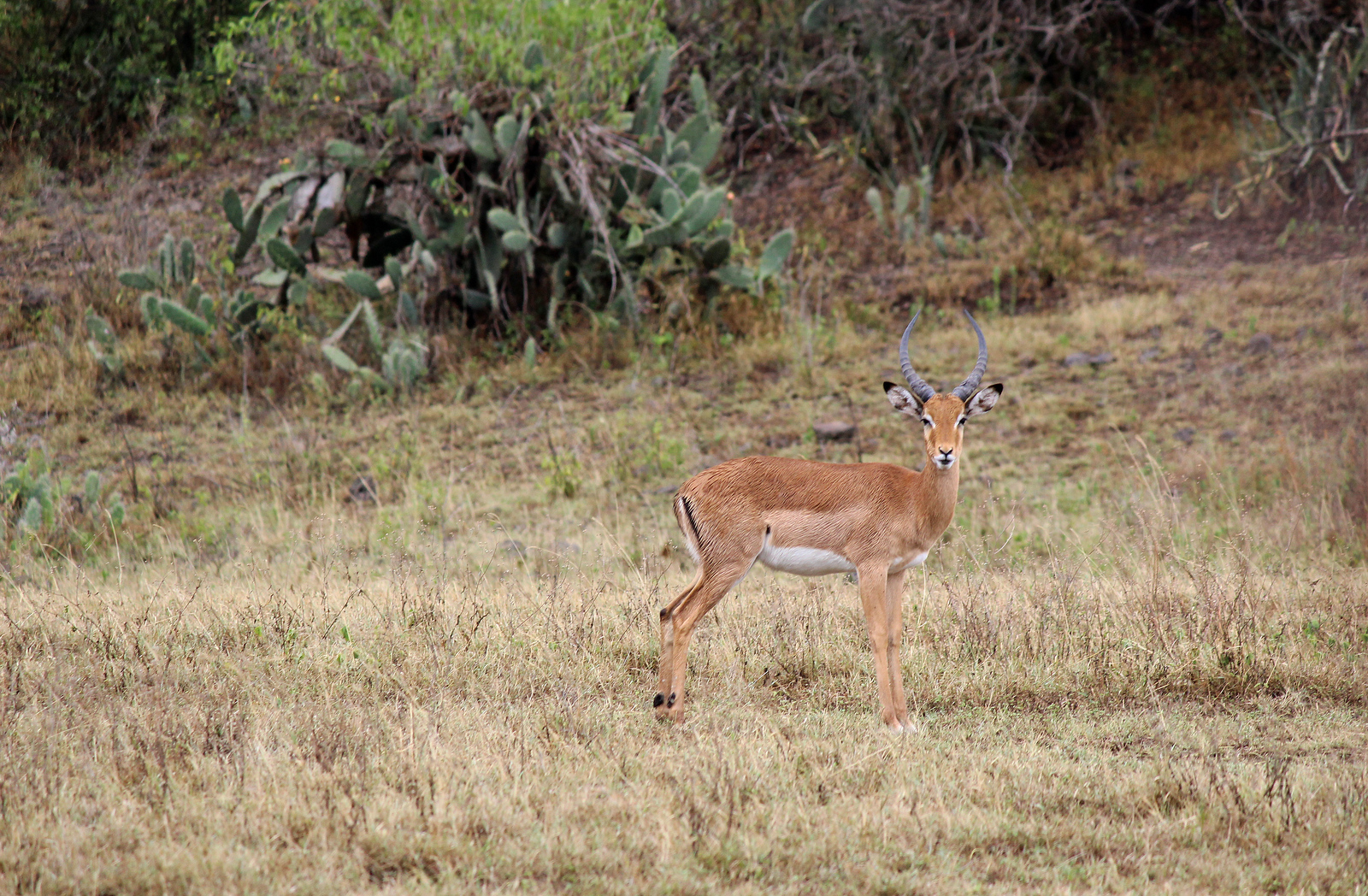 It’s a wild pig of Africa with a short, grey coat. Warthogs live down holes in the ground and love rooting around for food like roots and bulbs. They have huge tusks on their face that are used to defend themselves against predators. I loved watching warthogs prance around with their skinny tails sticking straight up in the air. 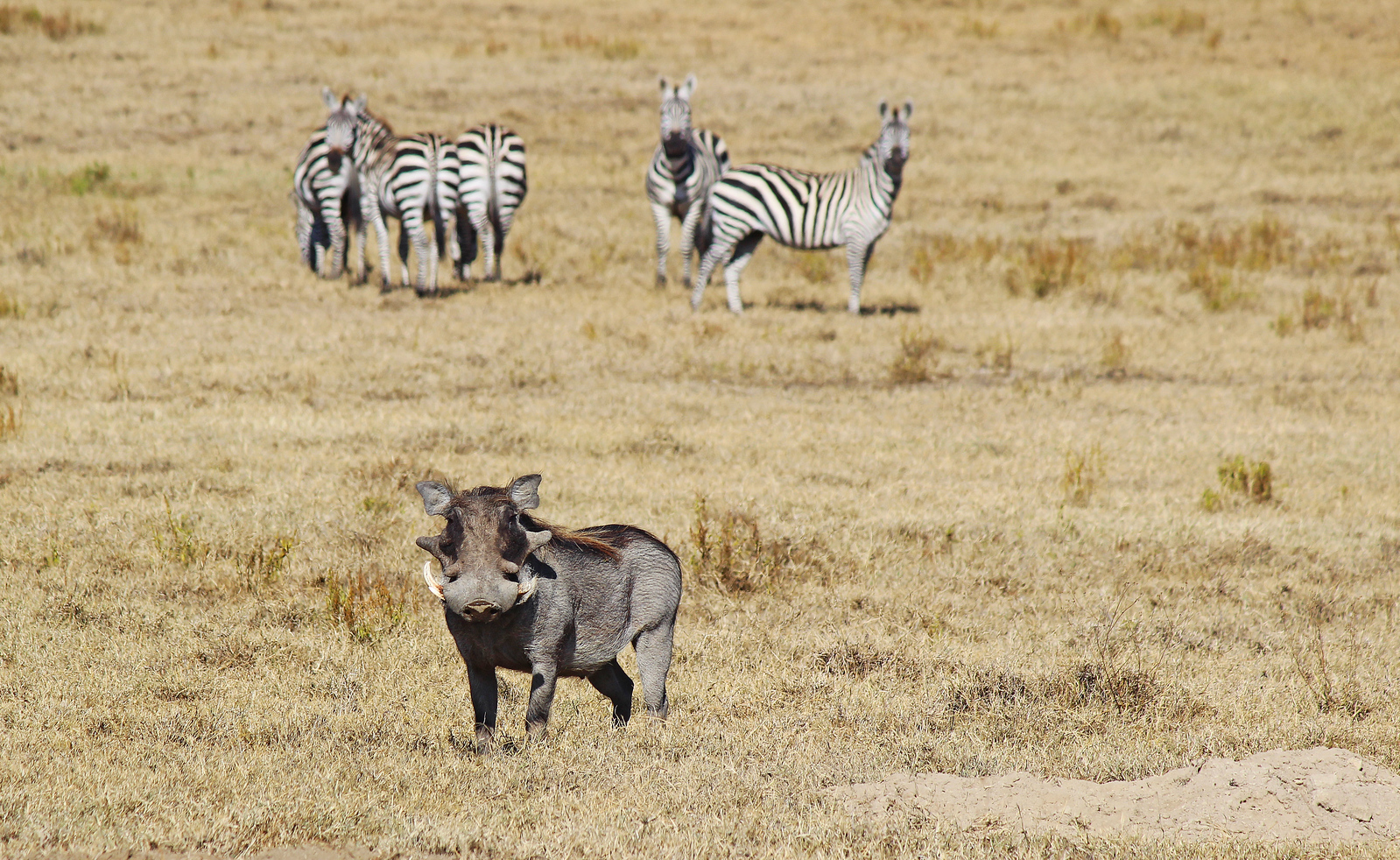 Jackals resemble small dogs, or even foxes. They mostly feed on small mammals, like birds. They also might hang around after lion kills, lurking about.

These tiny, pretty antelopes were elusive, but we managed to spot a few of them. They have delicate features and they are often hiding in the bush. Very cute.

Baboons are the largest primates in Africa. We saw many of them perched up in the trees or roaming across the open fields. They can be aggressive in nature, though they always kept their distance from us.

Baboon with a baby on her back!

These striking monkeys have long black and white hair. They live in the forested regions and live entirely on leaves. They are great jumpers – covering up to 100 feet of ground in one leap! 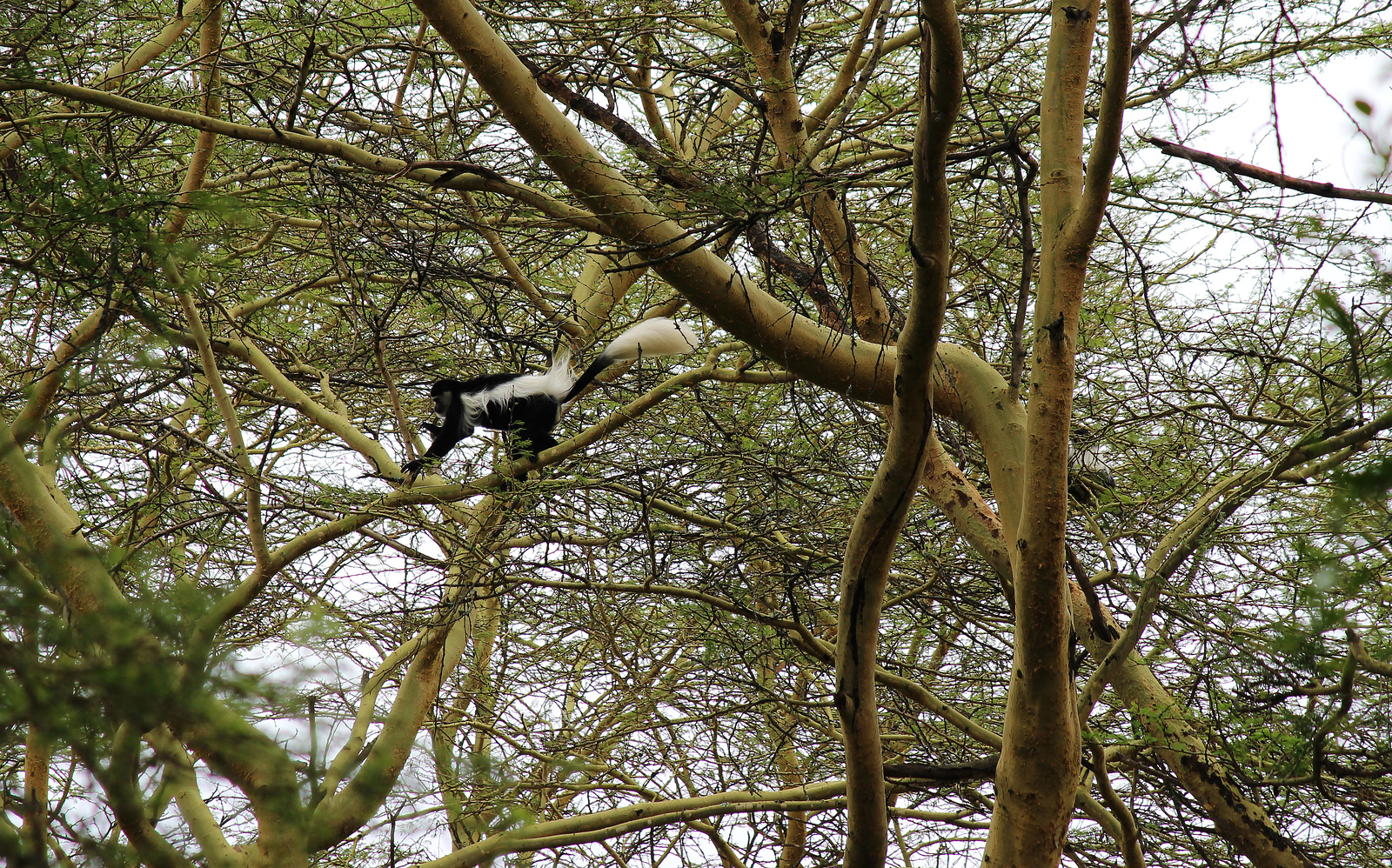 Vervets are playful and mischievous monkeys in Kenya. They tend to stay up in the trees, though they are constantly doing something: climbing around, grooming themselves, or even fighting one another. 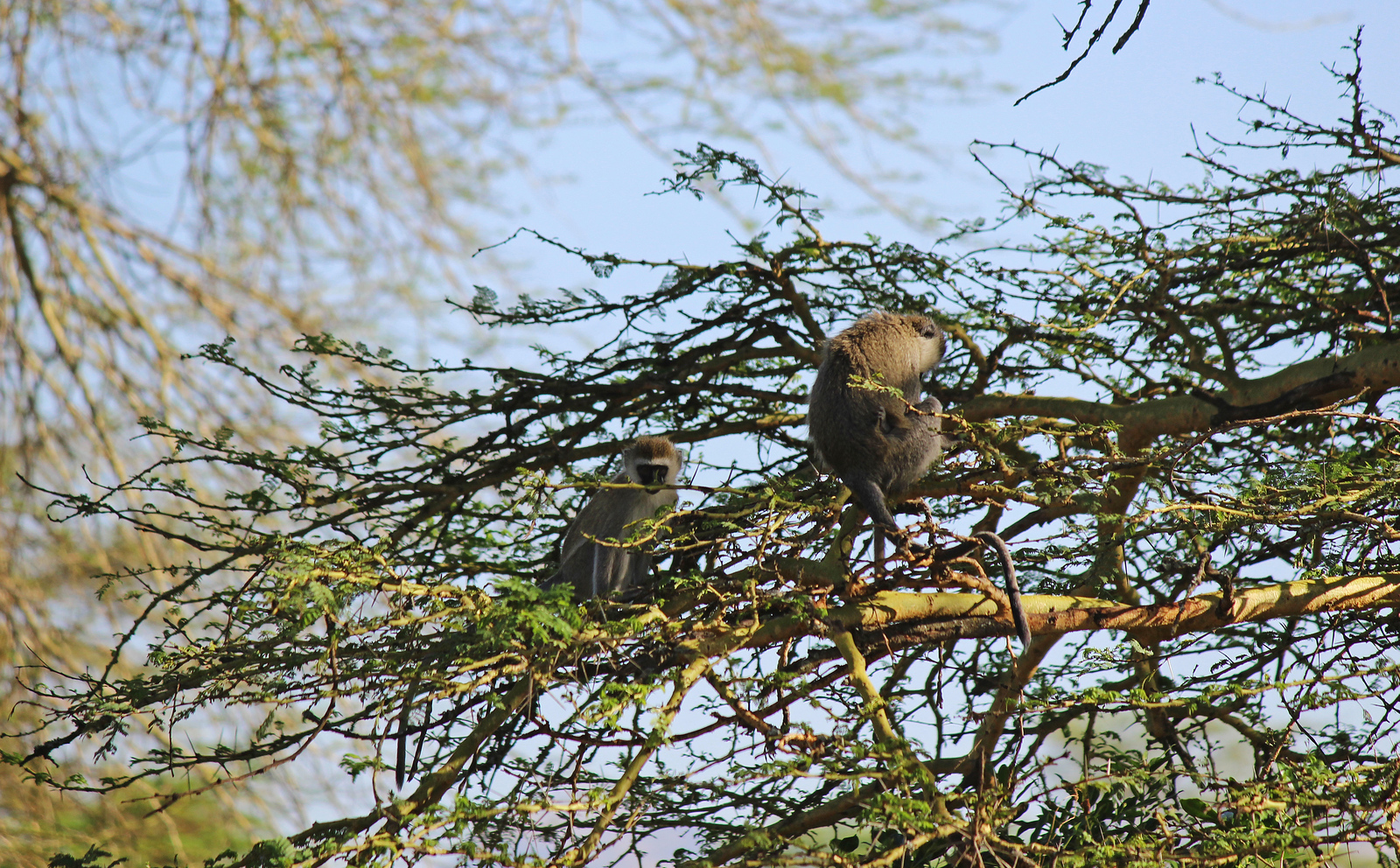 To see more of my wildlife photography, please check out my entire Kenya photo album. I volunteered at Soysambu Conservancy with Animal Experience International, and I’ve written extensively about my experience in this article. 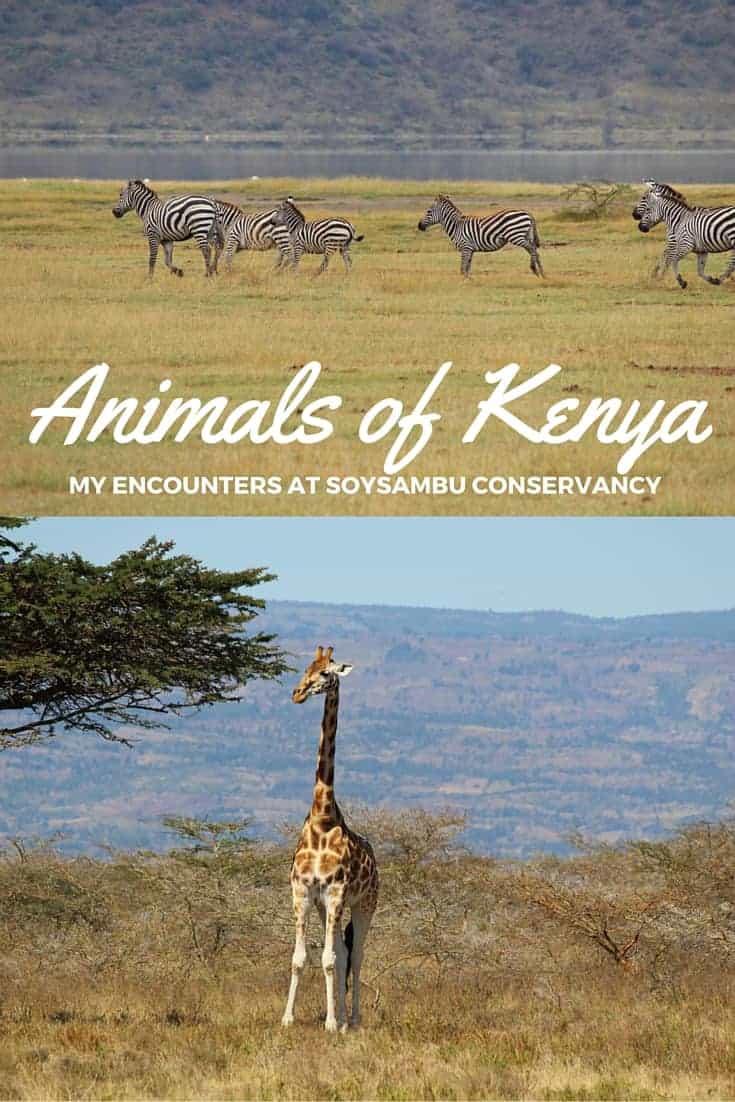 Which African animal is your favorite?

Wow. The amount of variation you guys saw was incredible. It must have been an ultimate magical experience! How was it dealing with a baby 2-week old Giraffe? I can't describe how badly I want to visit Africa. However, I've been putting it off until I'm older and have more money to see a few African countries in one trip. Did you find Kenya expensive?

I saw the Big 5 in Africa when I did my safari- that rhino was elusive! But my favorite animal to see was the giraffe. There were quite a few and so fun to watch!

Great photos, looks like you had an amazing trip! We had a similar experience to you during our time in South Africa a few years ago. Just as your driver laughed at you when you spotted zebras for the first time, our driver laughed at us when we were amazed to see giraffes cross the road during our ride from the airport to the hotel. We certainly saw several incredible animals but giraffe remained my favorite throughout the trip. I don't recall seeing Eland while we were there. I'll have to put it on the list to spot for next time!