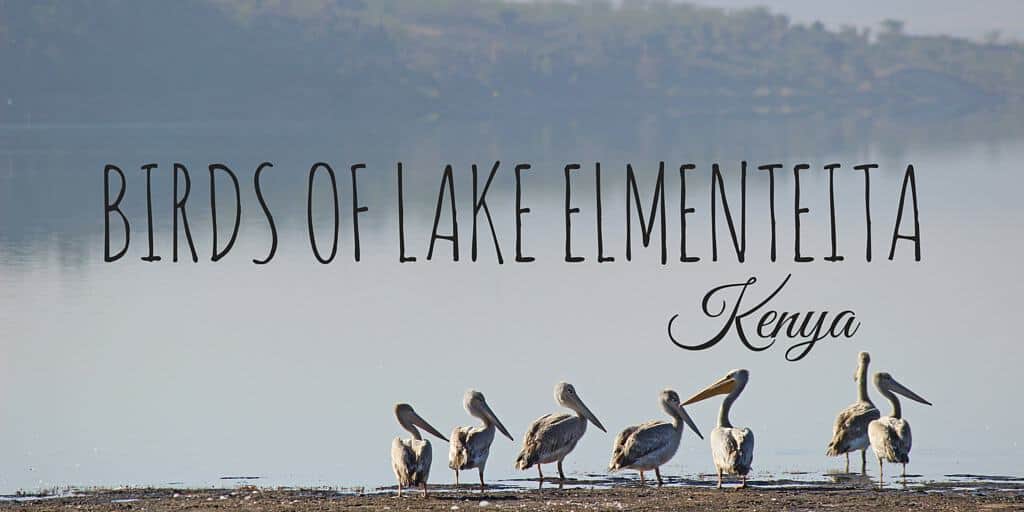 With over 400 species of birds, it’s important to monitor the birds of Lake Elmenteita in Kenya.

Lake Elmenteita (also spelled Lake Elementaita) is one of the Great Rift Valley soda lakes. It’s on the property of Soysambu Conservancy, where I lived and volunteered. It isn’t a popular area for human tourists, though it’s quite important to the birds. Across the Kenya Lake System (a UNESCO World Heritage Site), over 4 million Lesser Flamingos travel between the three lakes (Lakes Elmenteita, Nakuru, and Bogoria). And that’s just Lesser Flamingos. With hundreds of species of birds, you can imagine the great spectacle of wildlife flying around. 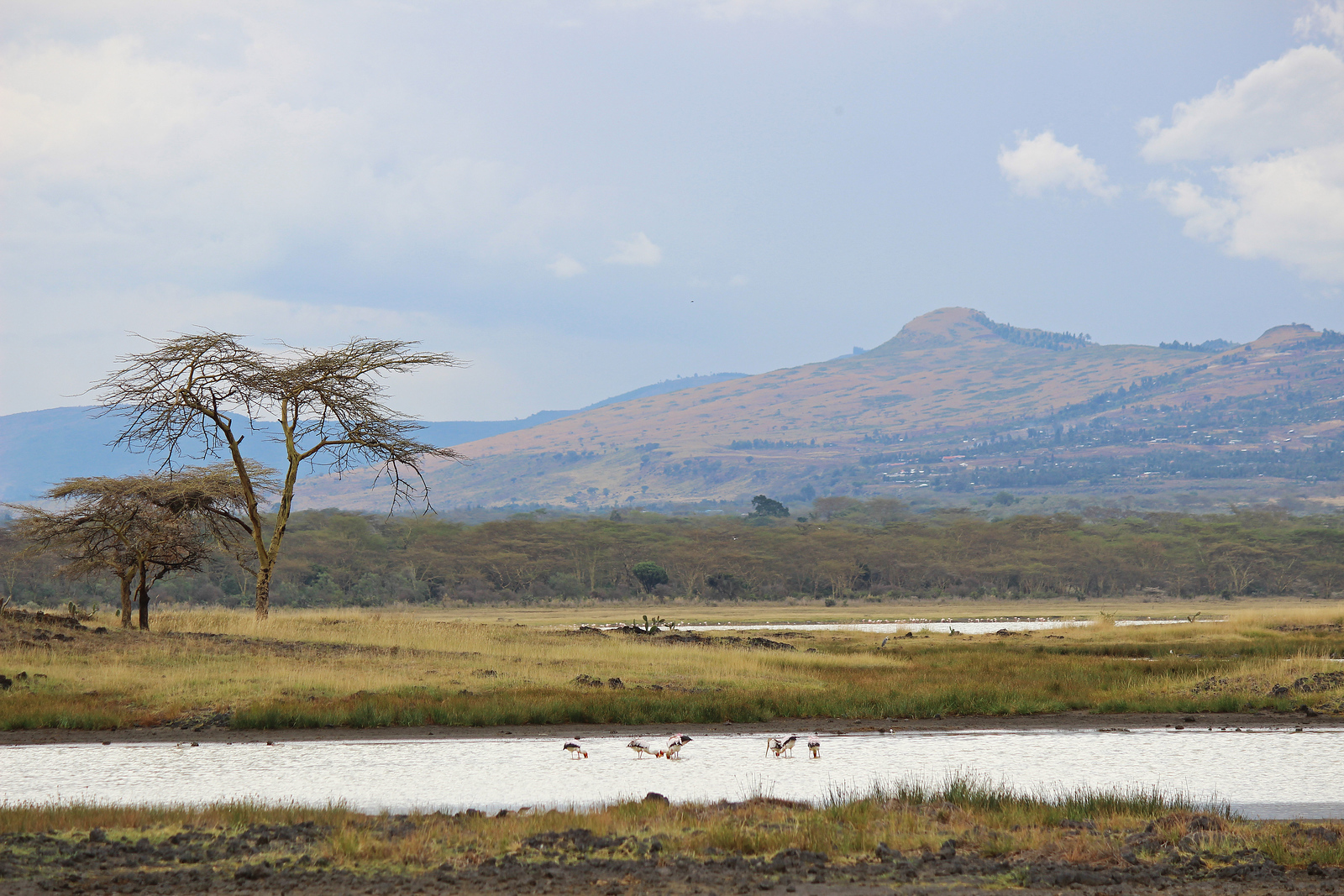 A soda lake is an alkaline lake. They have high concentrations of carbonate salts. Lake Elmenteita contains trona, a non-marine evaporite mineral, that can be mined as sodium carbonate. Soda lakes are the most highly productive aquatic environments in the world, due to their unlimited supply of dissolved carbon dioxide. This lake is quite shallow at less than one metre deep. During the dry seasons, it is surrounded by trona-encrusted mudflats. 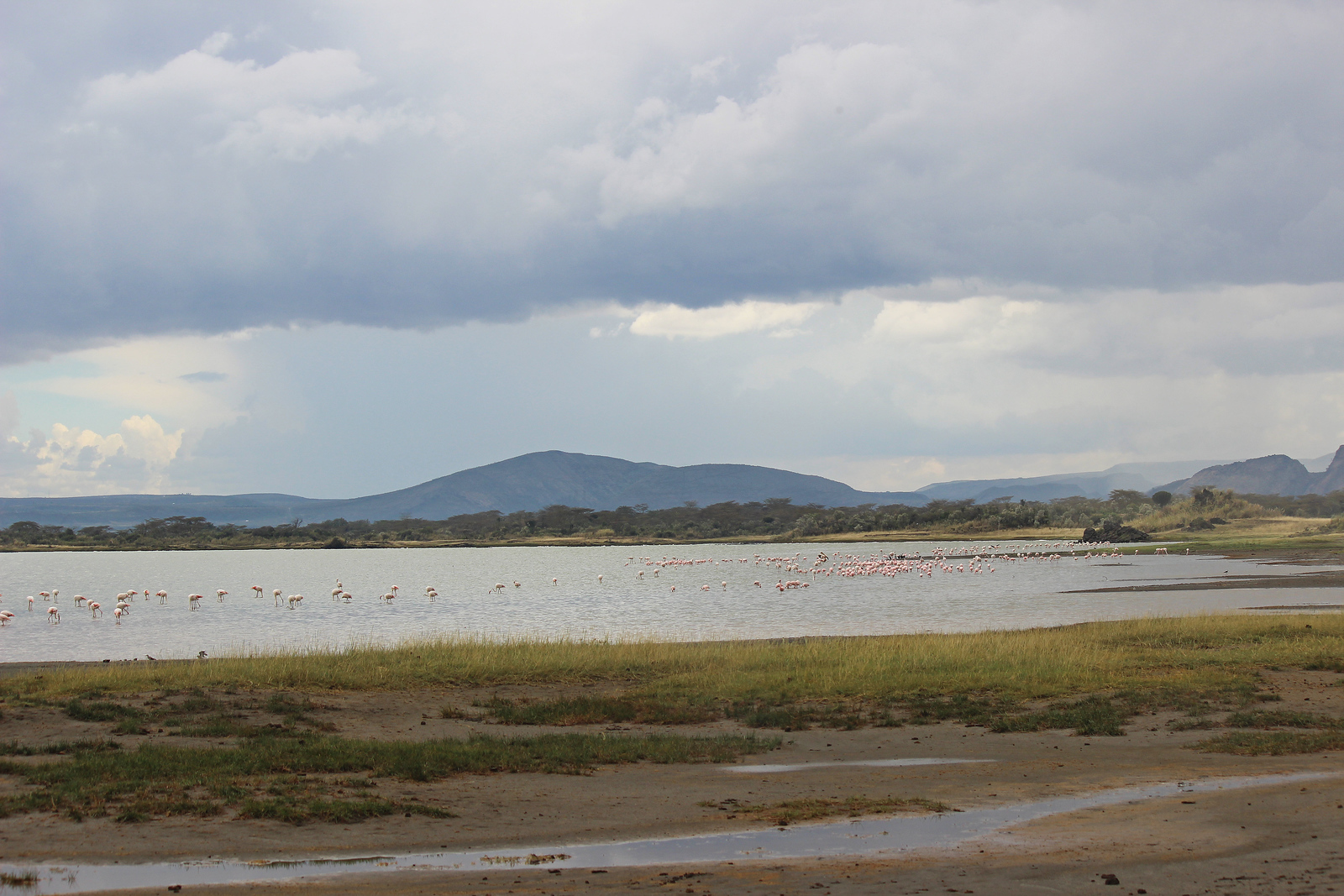 Out of the 400 bird species, there are 13 globally-threatened and 8 regionally-threatened species that live there. Both Greater and Lesser Flamingo varieties are attracted to Lake Elmenteita by the insect larvae, crustaceans, and blue-green algae. This lake is the only breeding colony in East Africa for Great White Pelicans with over 8000 breeding pairs. There are over 100 species of migratory birds, including the African Spoonbill, Black-Necked Grebe, Yellow Billed Stork, Gull Billed Tern, Pied Avocet, Black Winged Stilt, and Grey-Headed Gull. These lands have an important role along the African-Eurasian flyway system, where billions of birds travel from northern breeding grounds to African spots in the winter months. 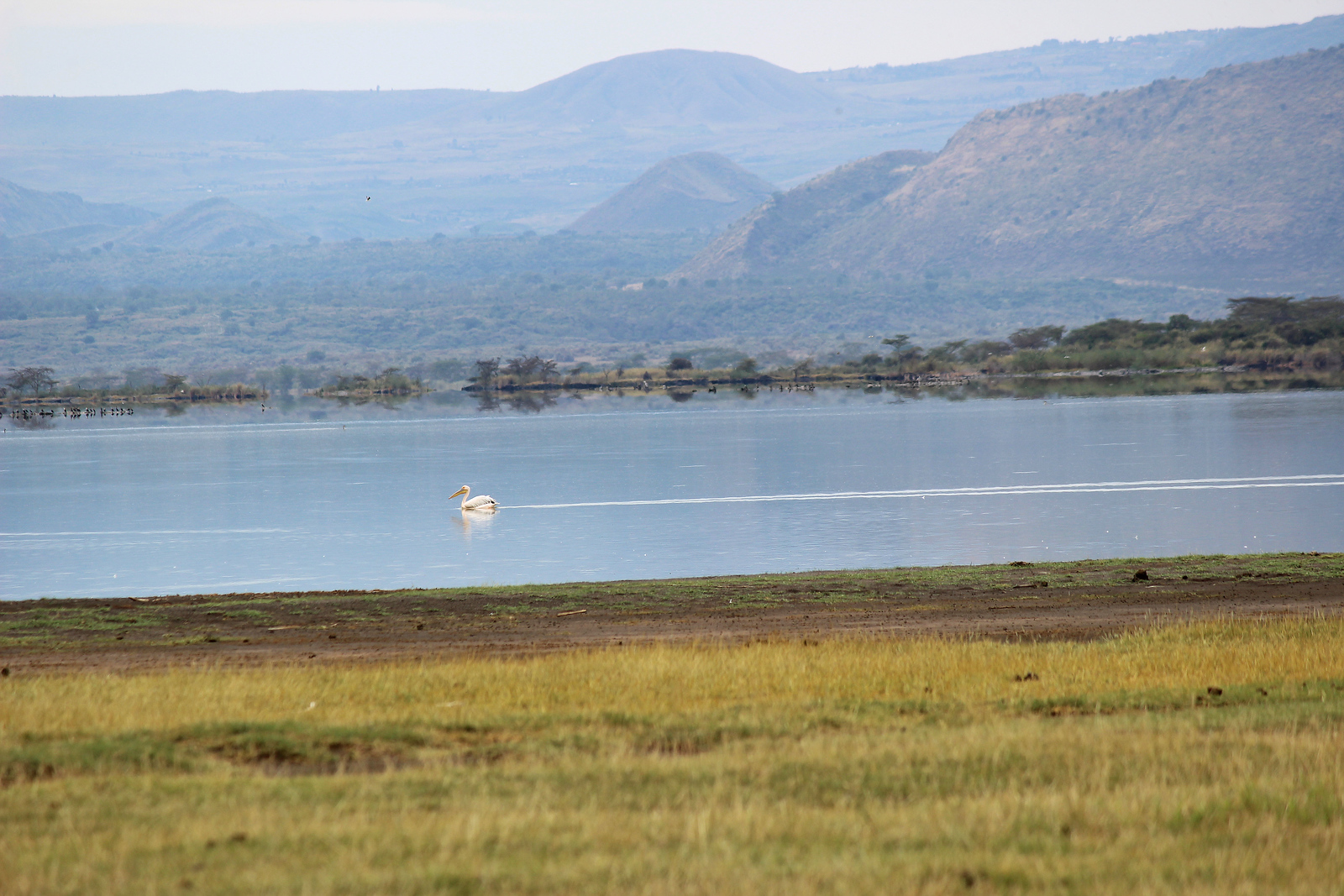 One of my roles as a volunteer at Soysambu Conservancy was to monitor the wildlife. In addition to monitoring the Rothschild Giraffes, we also watched over the birds at Lake Elmenteita. We drove to sections of the lake and counted the birds. We made note of the present varieties of birds and their approximate numbers. It’s very important to monitor the birds to keep track of their numbers. Are there new species of birds at the lake? Are the bird populations of various species rising or dwindling? Hopefully, some of our bird sightings were helpful to their overall studies.

Here are some of the birds of Lake Elmenteita that I managed to see and photograph. We saw birds all over Soysambu Conservancy, not just at the lake.

Out of these two flamingo species in Kenya, the Greater Flamingo is outnumbered by the Lesser Flamingo. The Lesser Flamingo is much more pink, especially on the bill. They both feed on blue green algae and microscopic creatures. We saw huge flocks of flamingos at Lake Elmenteita. Groups of flamingos were walking along the shallow waters of the lake. We also saw large collections of flamingos flying through the air, skimming across the surface of the water. It was quite the sight! 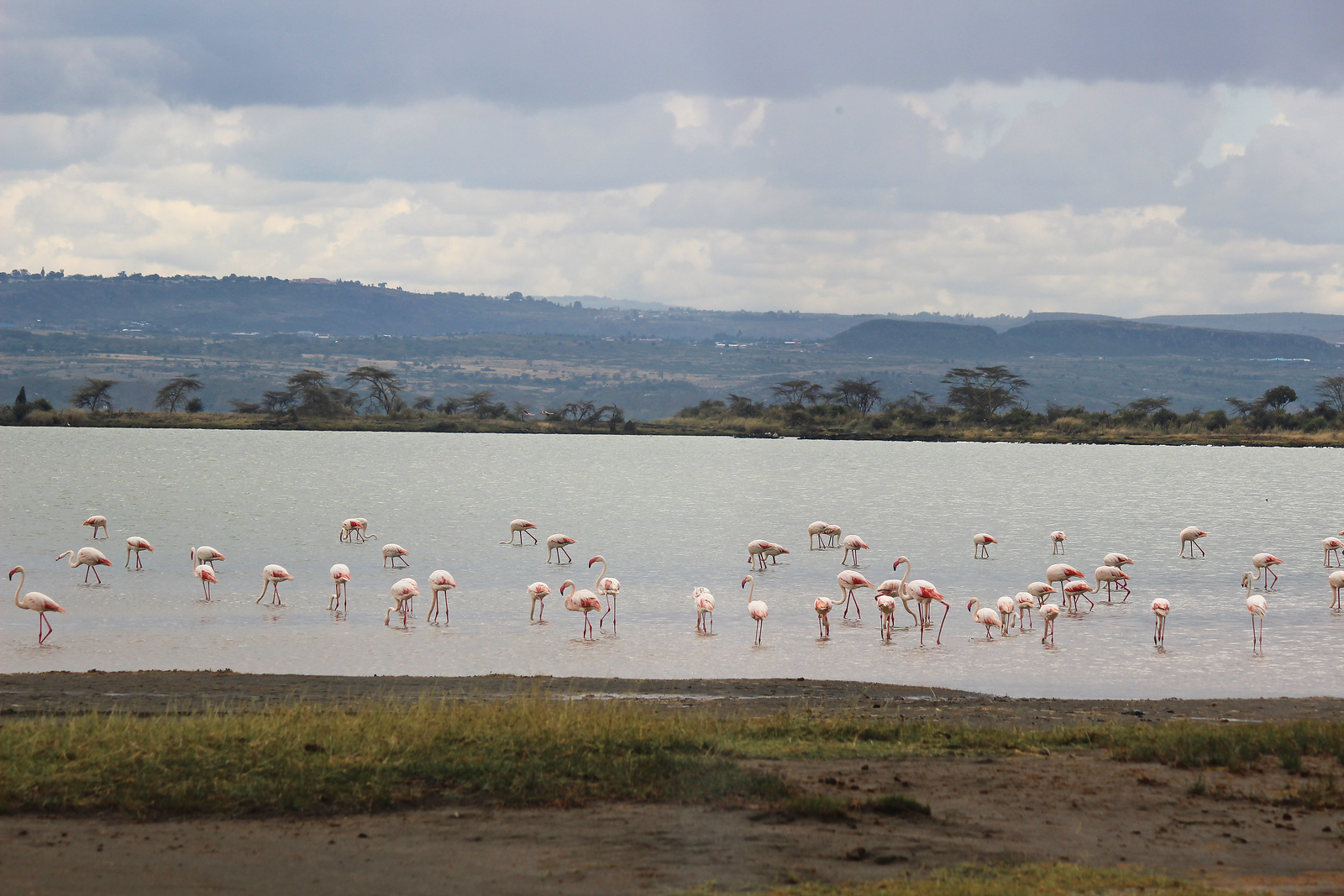 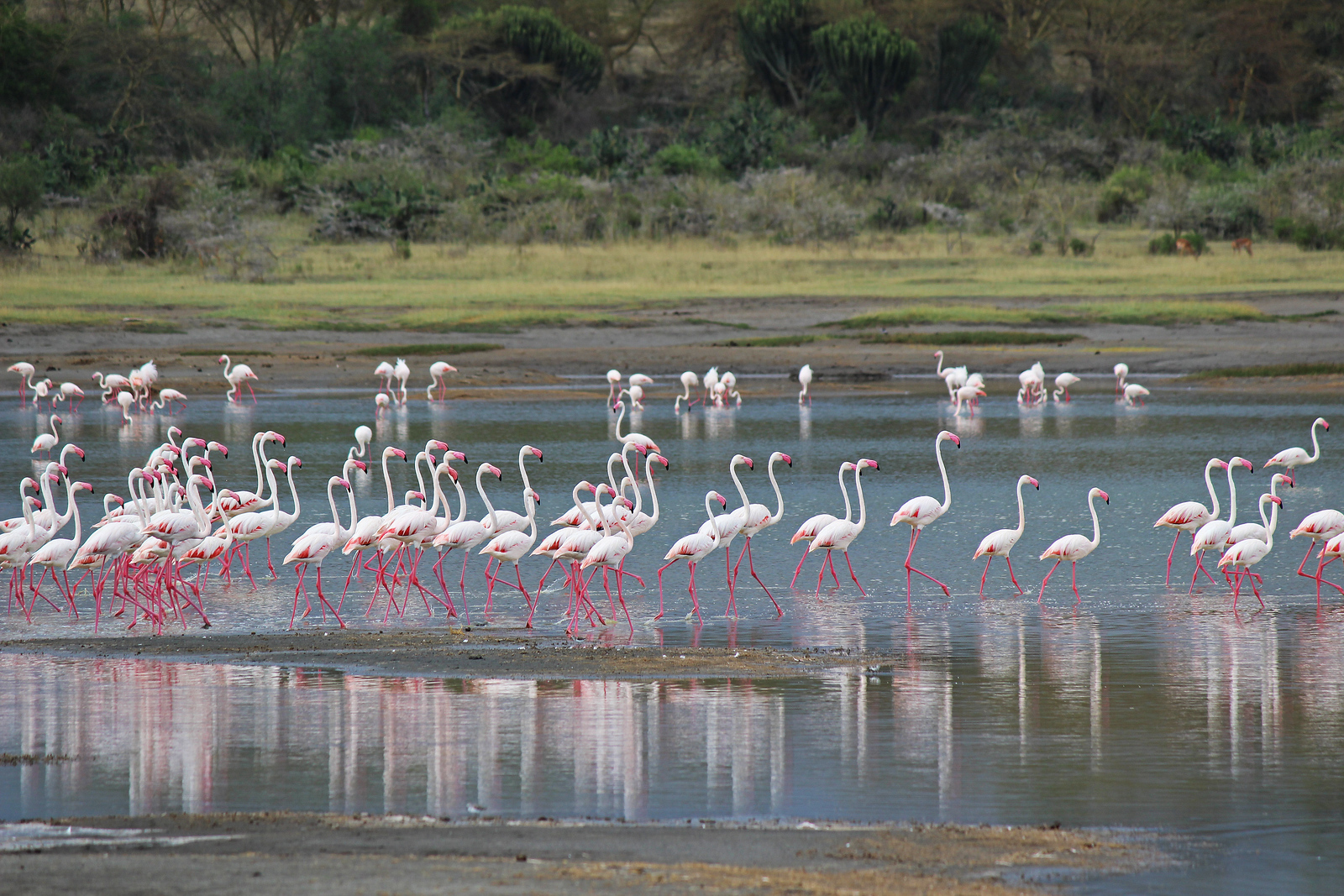 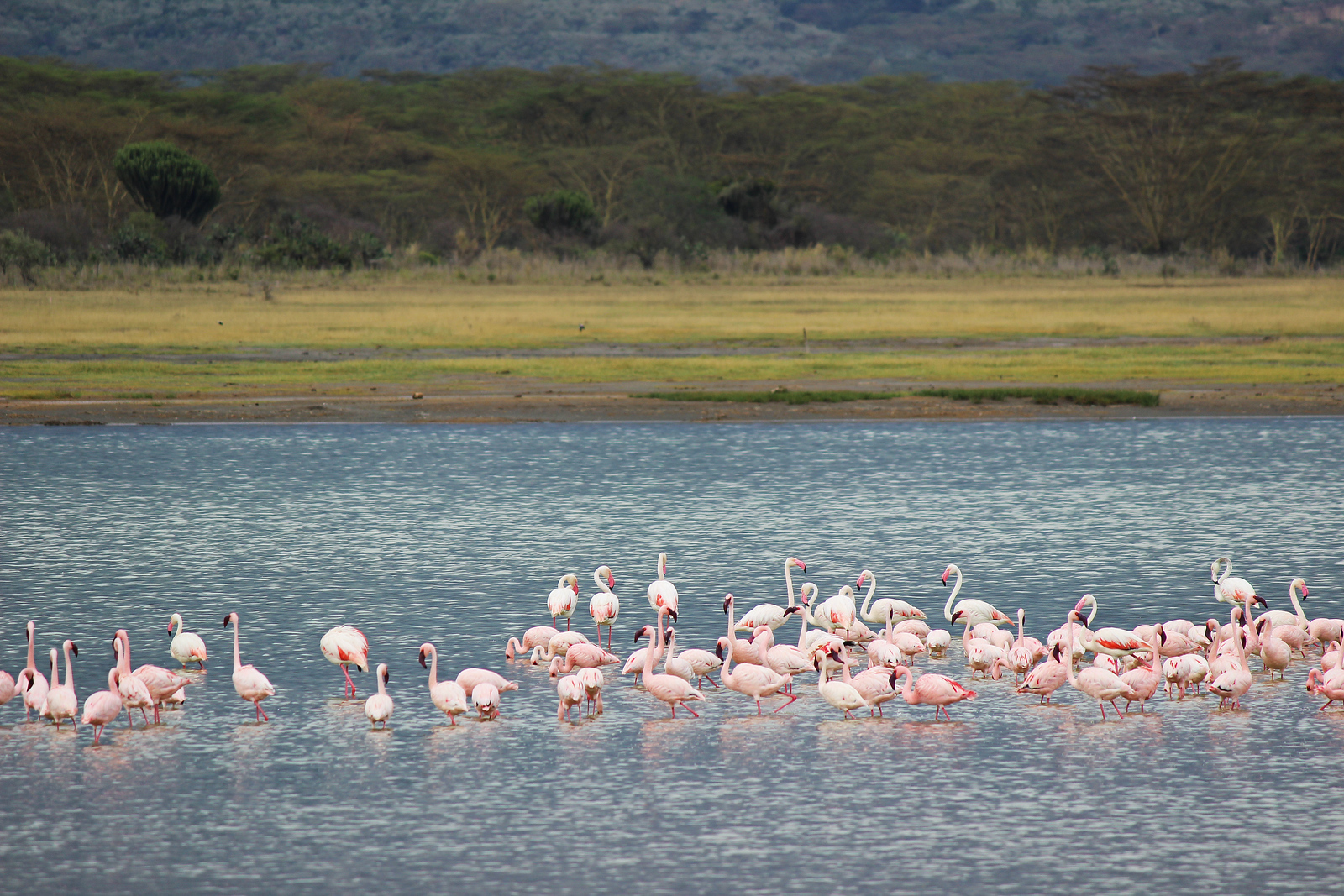 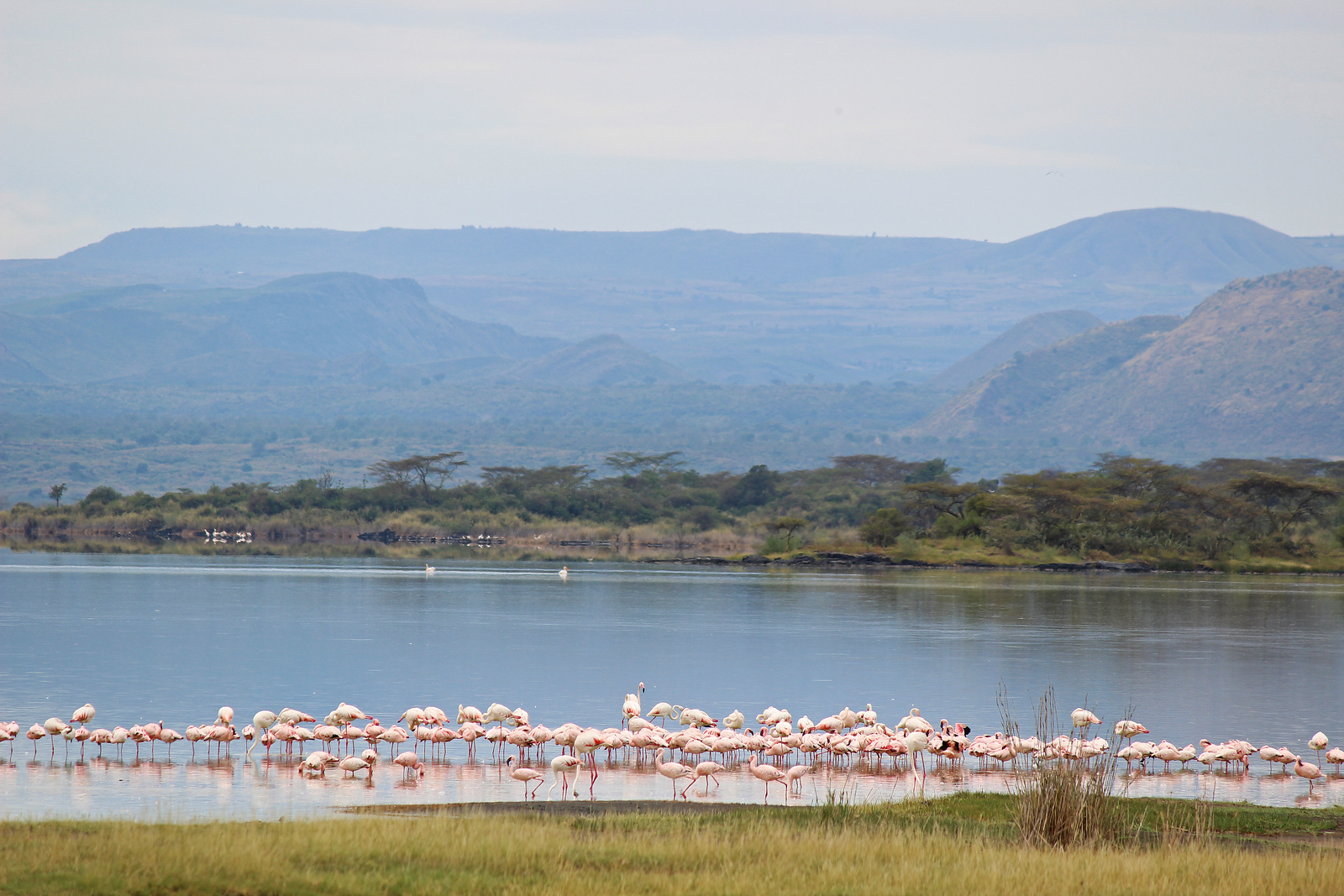 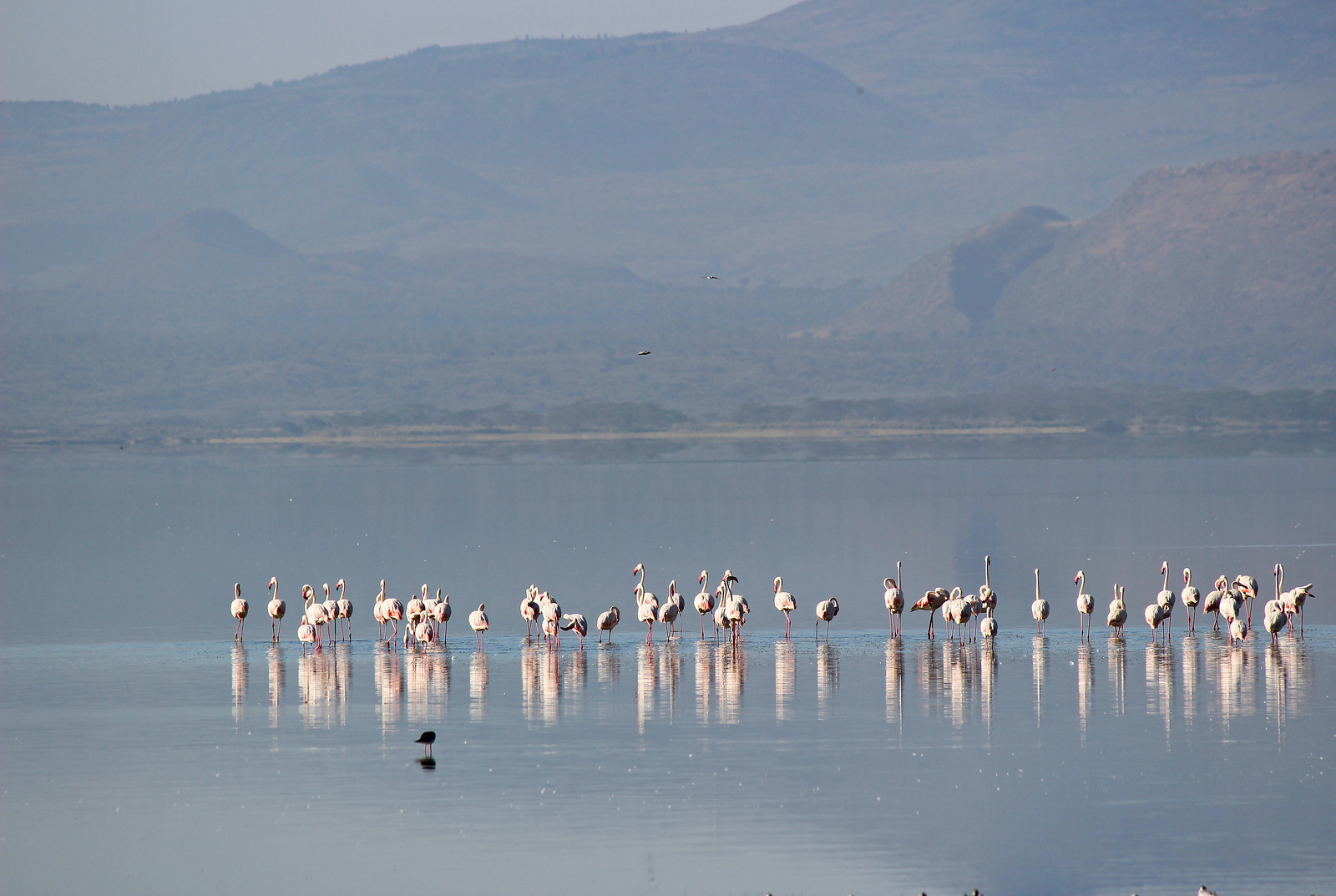 The Great White Pelican has a huge bill and an enormous wingspan. It’s nearly entirely white wit a big yellow pouch that hangs from its bill. It is black beneath its wings, which is noticeable in flight. I saw many pelicans congregating on the lake, whether standing by the shore, bobbing on the surface, or flying through the air. 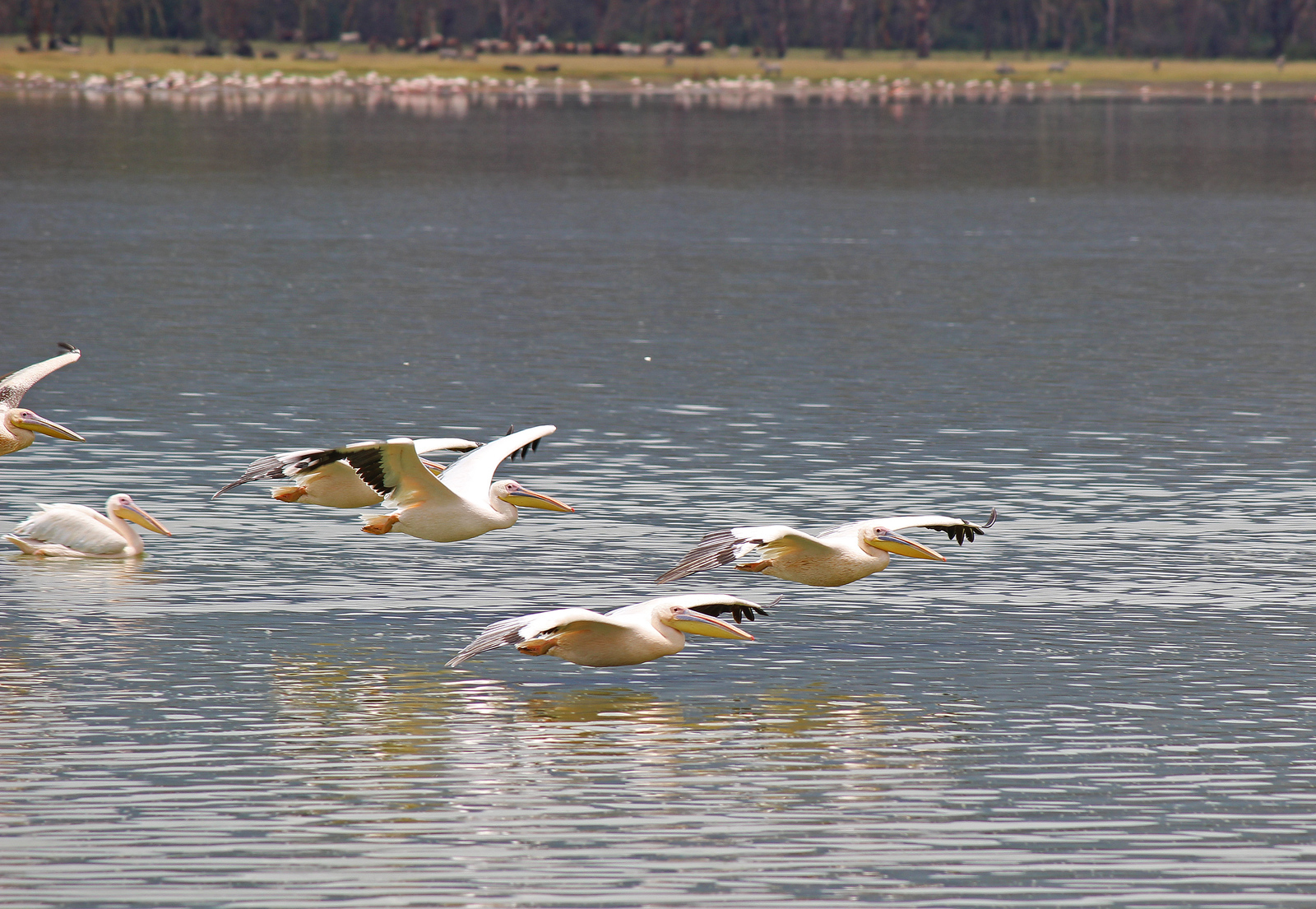 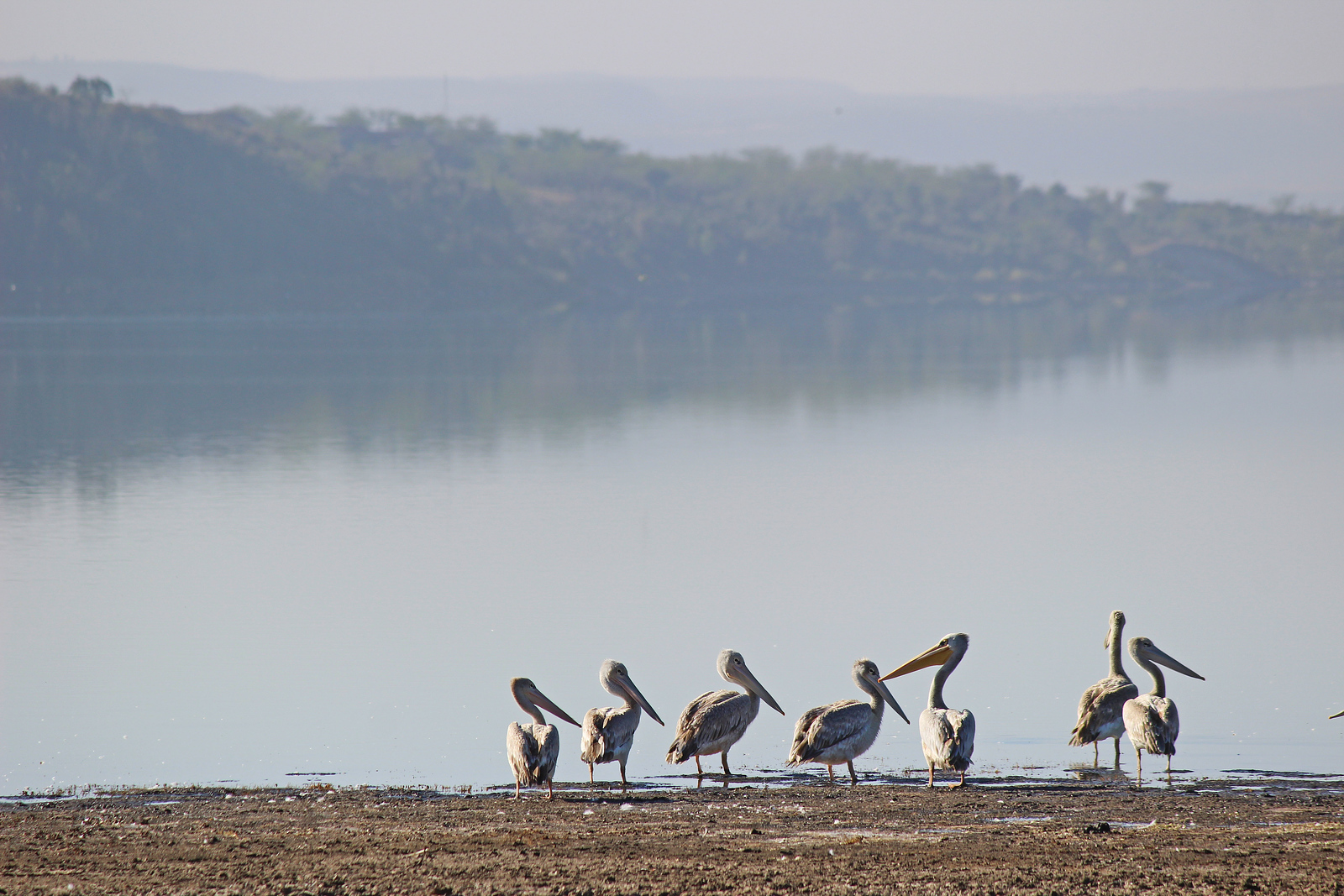 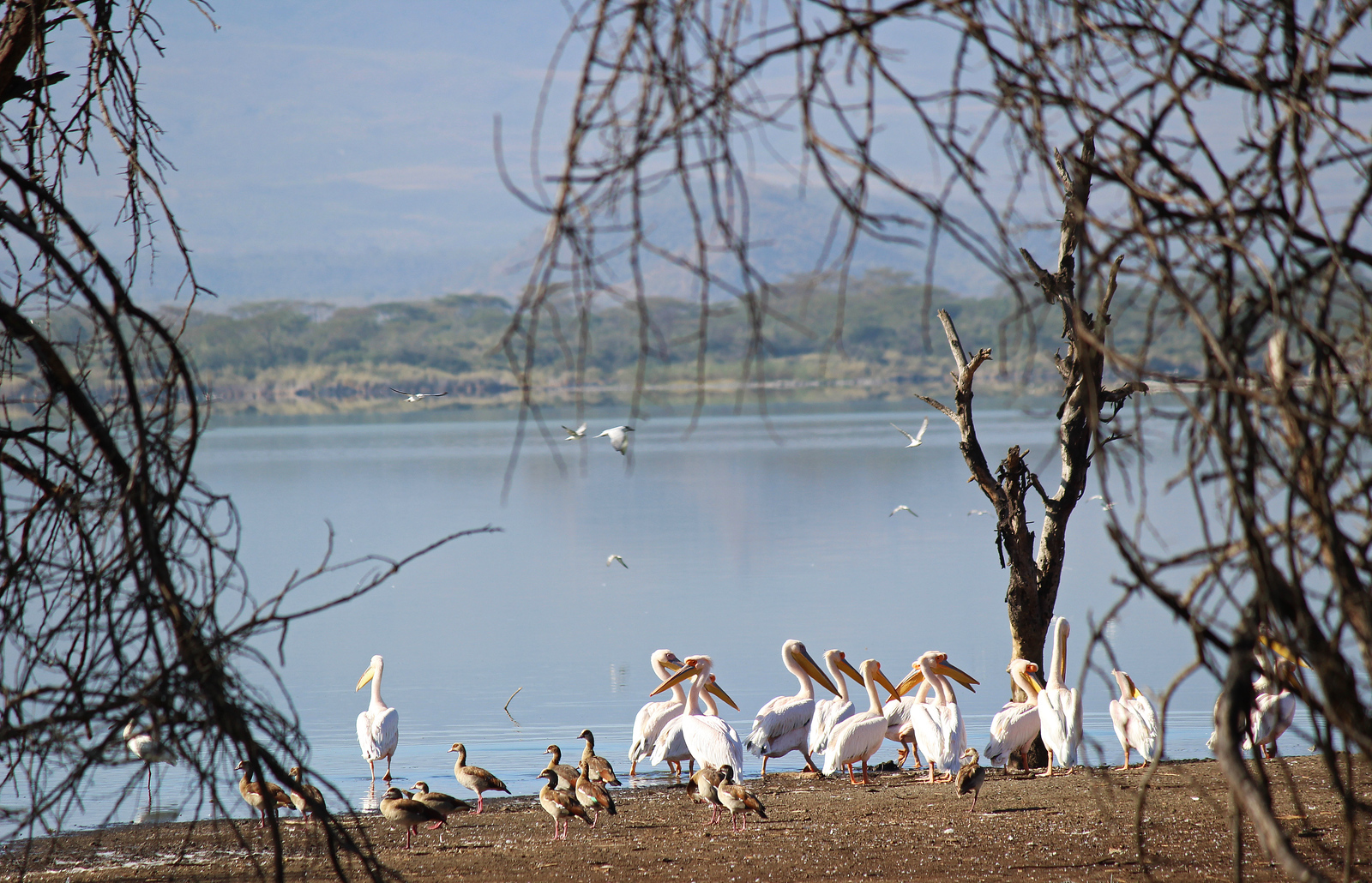 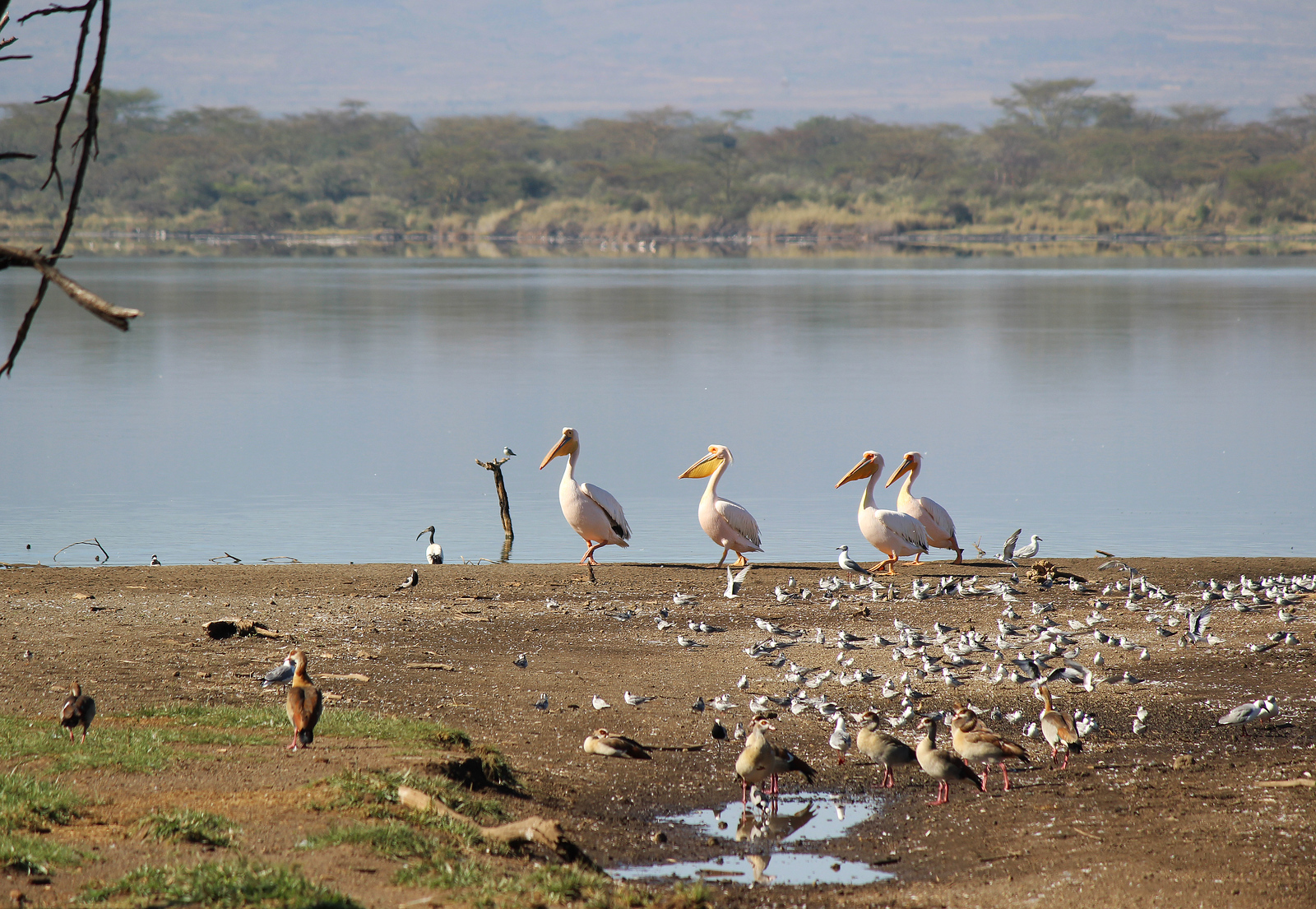 We observed this imposing creature by the shorelines of Lake Elmenteita. It’s a monstrous bird, standing up to 5 feet tall. We often saw the stork watching over the flamingos. Innocently thinking that he was keeping an eye on the flamingos to make sure they were okay, it was quite the contrary: if one weak or small flamingo strays from the group, the marabou stork will happily snatch up the bird for a snack! 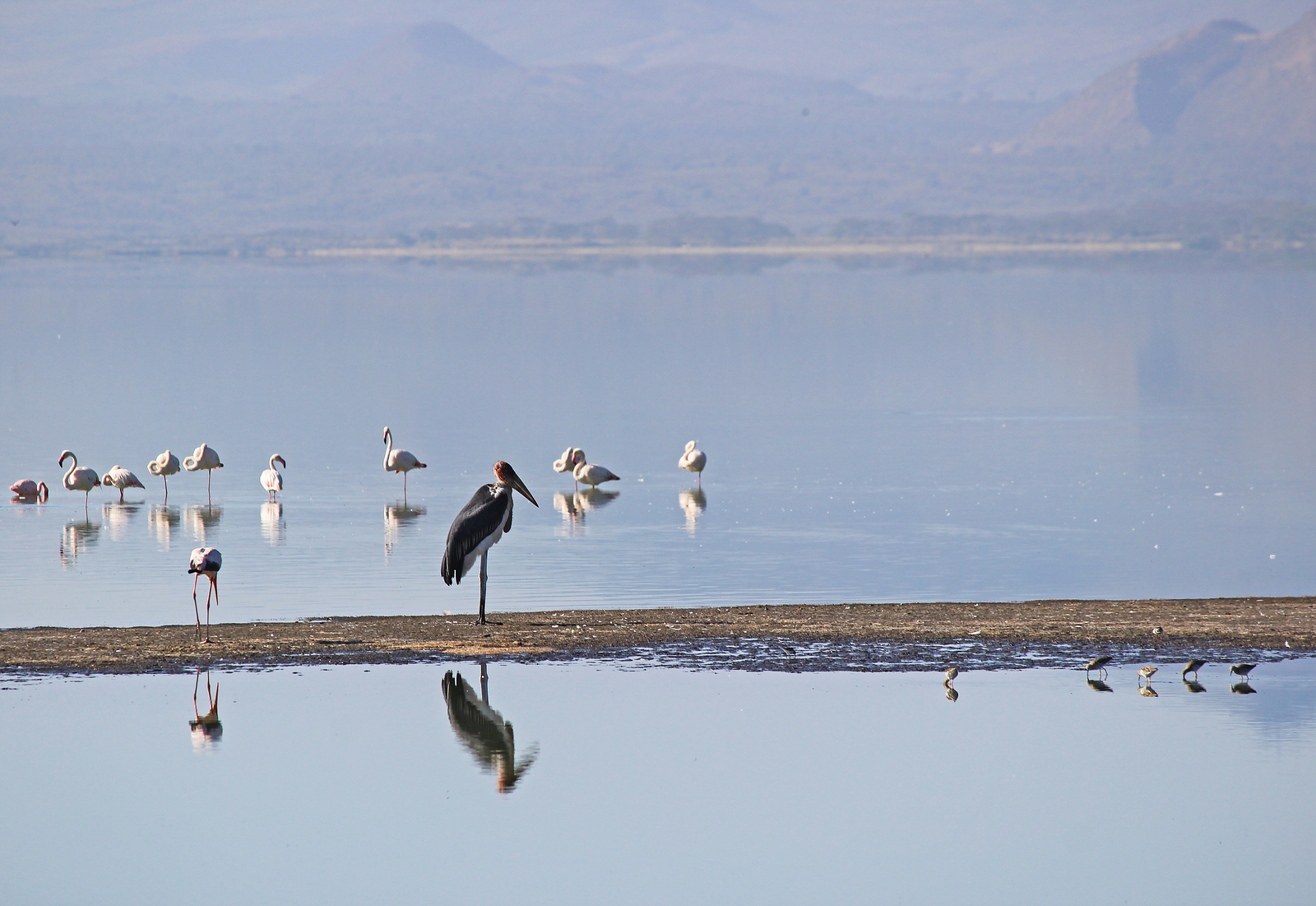 I really loved spotting this interesting looking goose. It is one of the most commonly spotted geese of the 14 species of waterfowl supported by East Africa’s lakes. It’s quite a noisy little bird, with its honking noises echoing across the lake.

It’s a bizarre looking bird, with its skinny legs that look like they’re wearing black leggings. It has a showy black crest, puffy gray feathers, and a red face mask. We saw secretary birds roaming the grasslands, hunting for snakes and lizards. 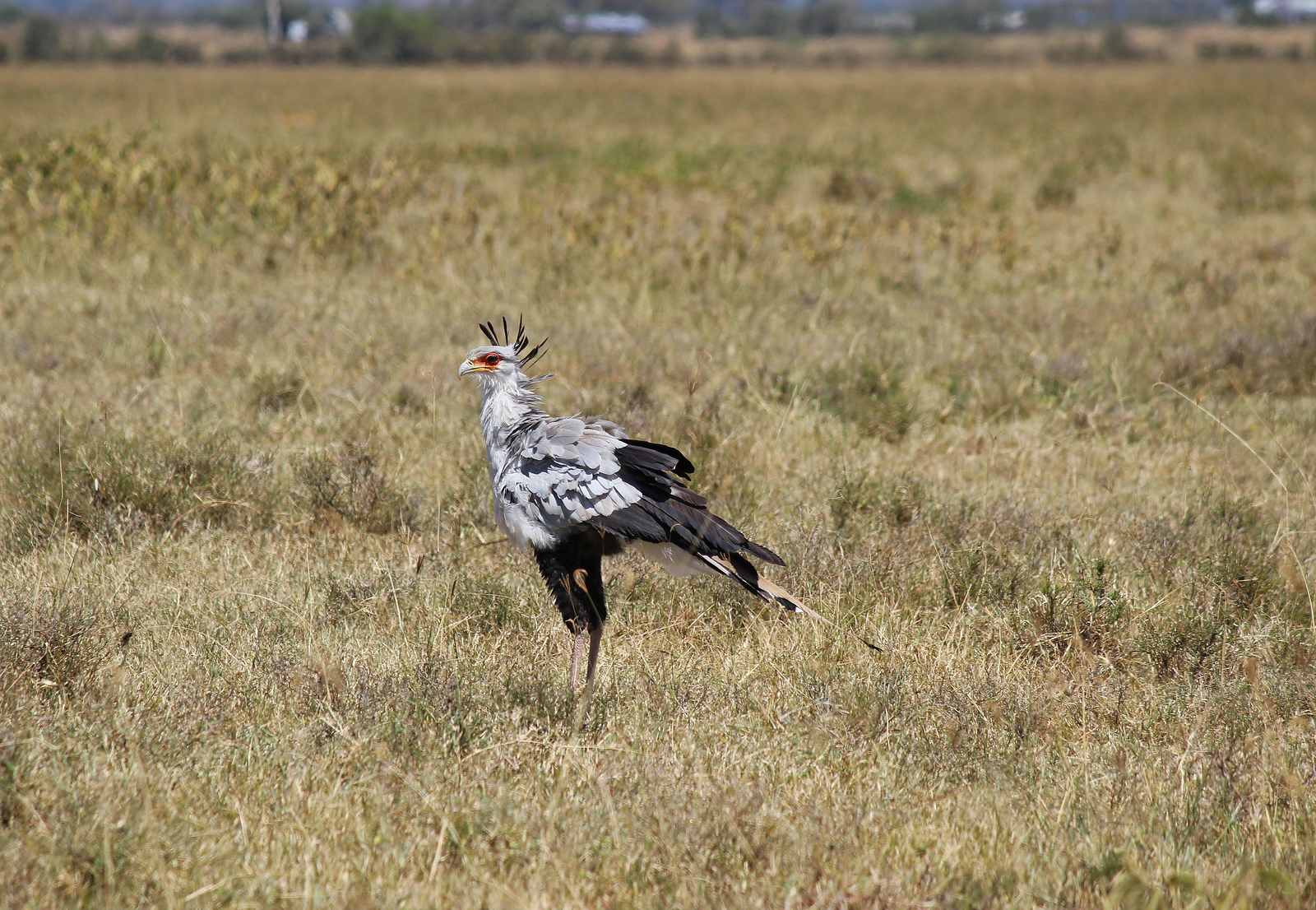 This is a very beautiful bird with glorious crown atop its head. This crane is quite large, measuring about three feet tall. Apparently it has a rather elaborate courtship dance that I didn’t get to see, but maybe someday! 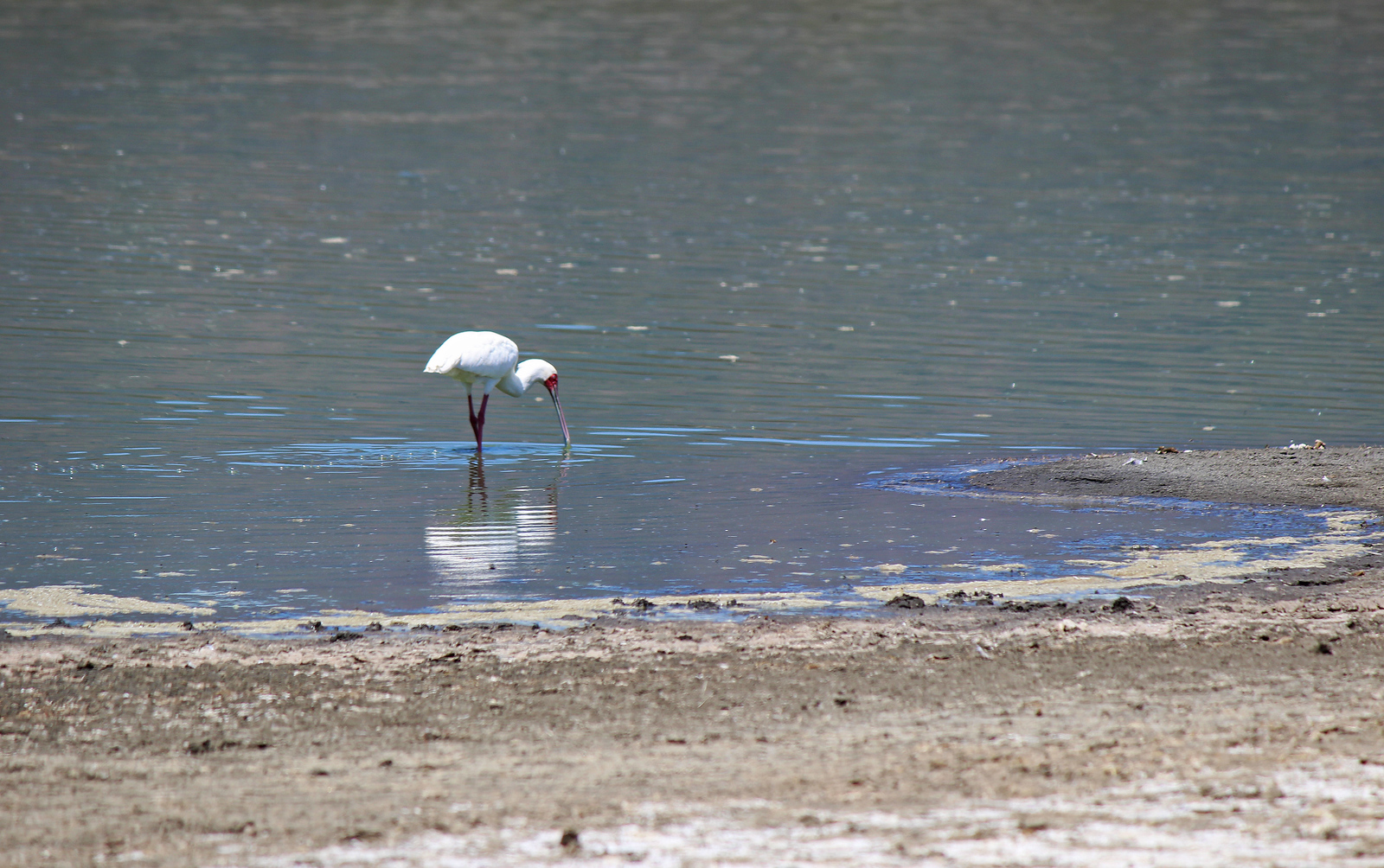 The long-crested eagle is a bird of prey found in Africa. We saw this one perched up in a tree, most likely scoping out some rodents to eat. 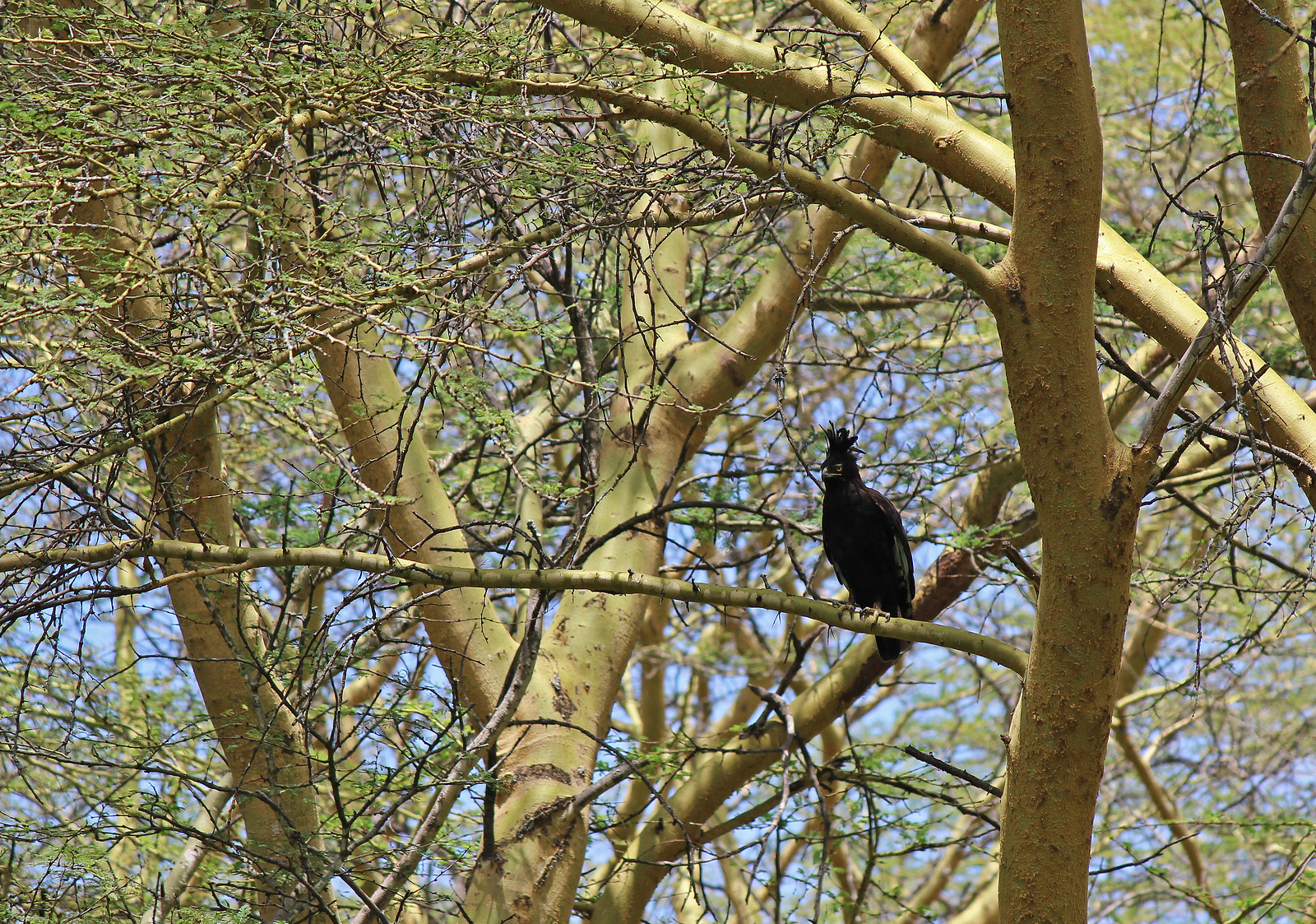 Many Birds at Soysambu Conservancy

Here are a few more birds that we observed, including the Great Egret, Hadada Ibis, and more. 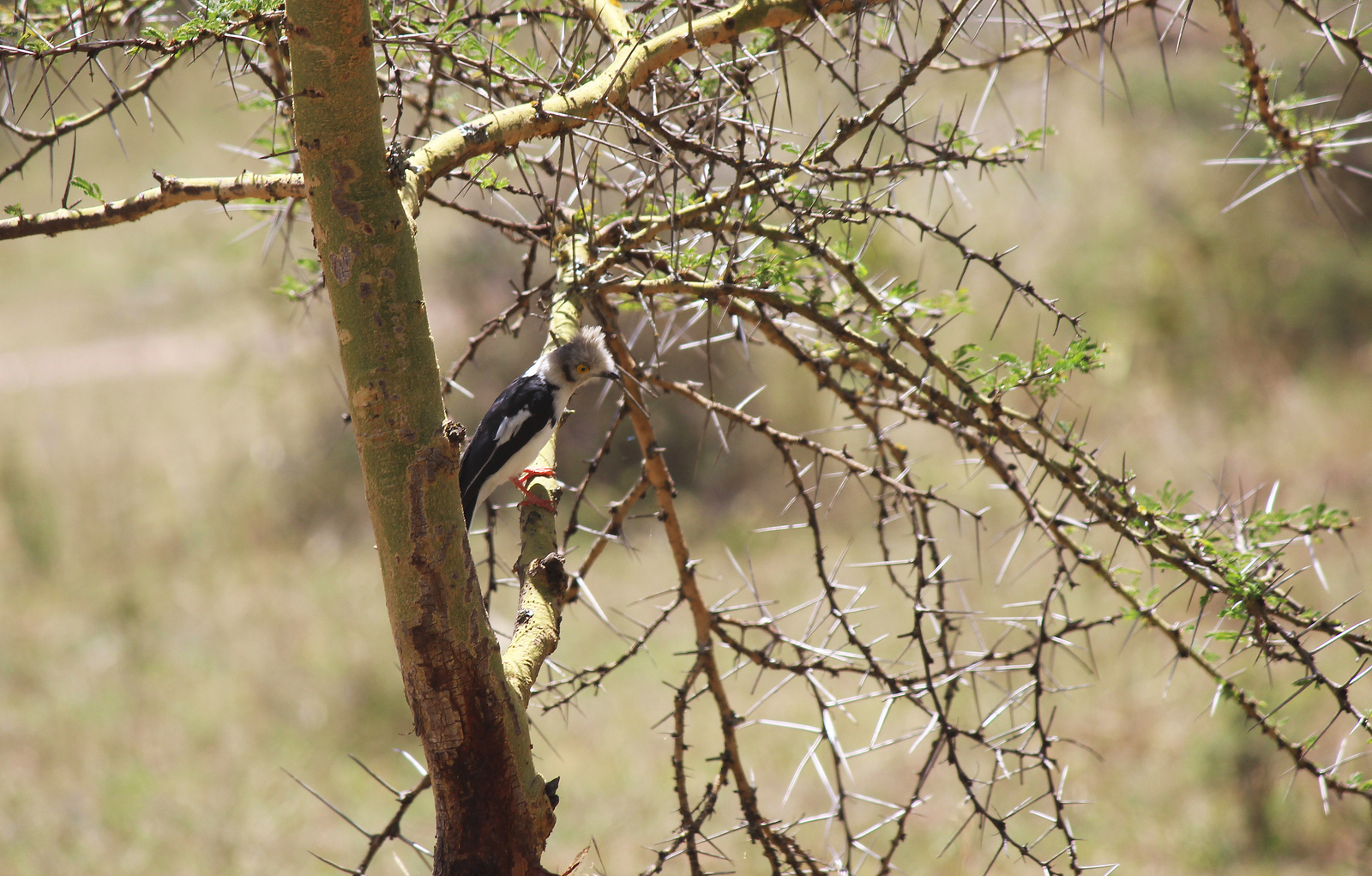 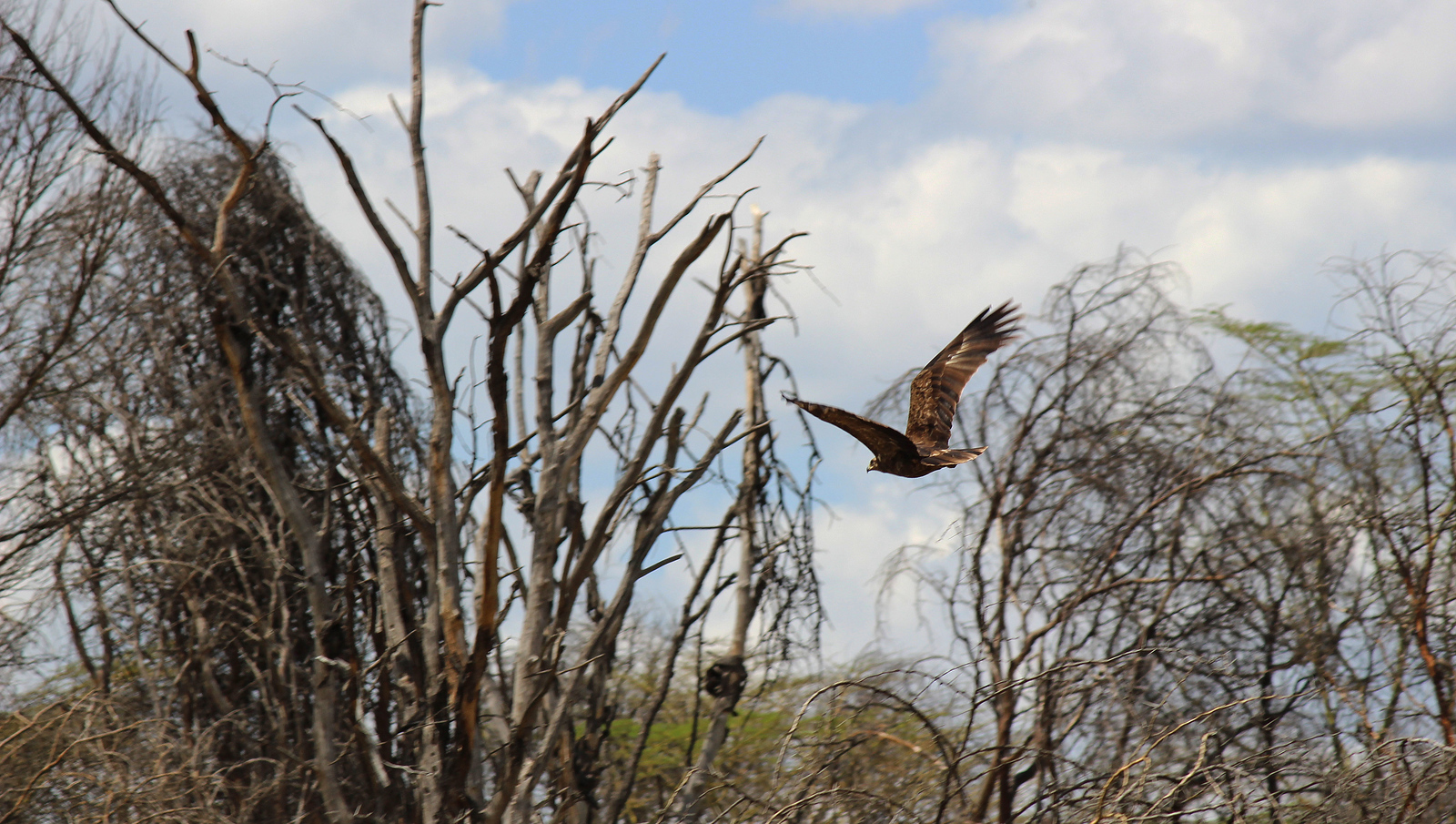 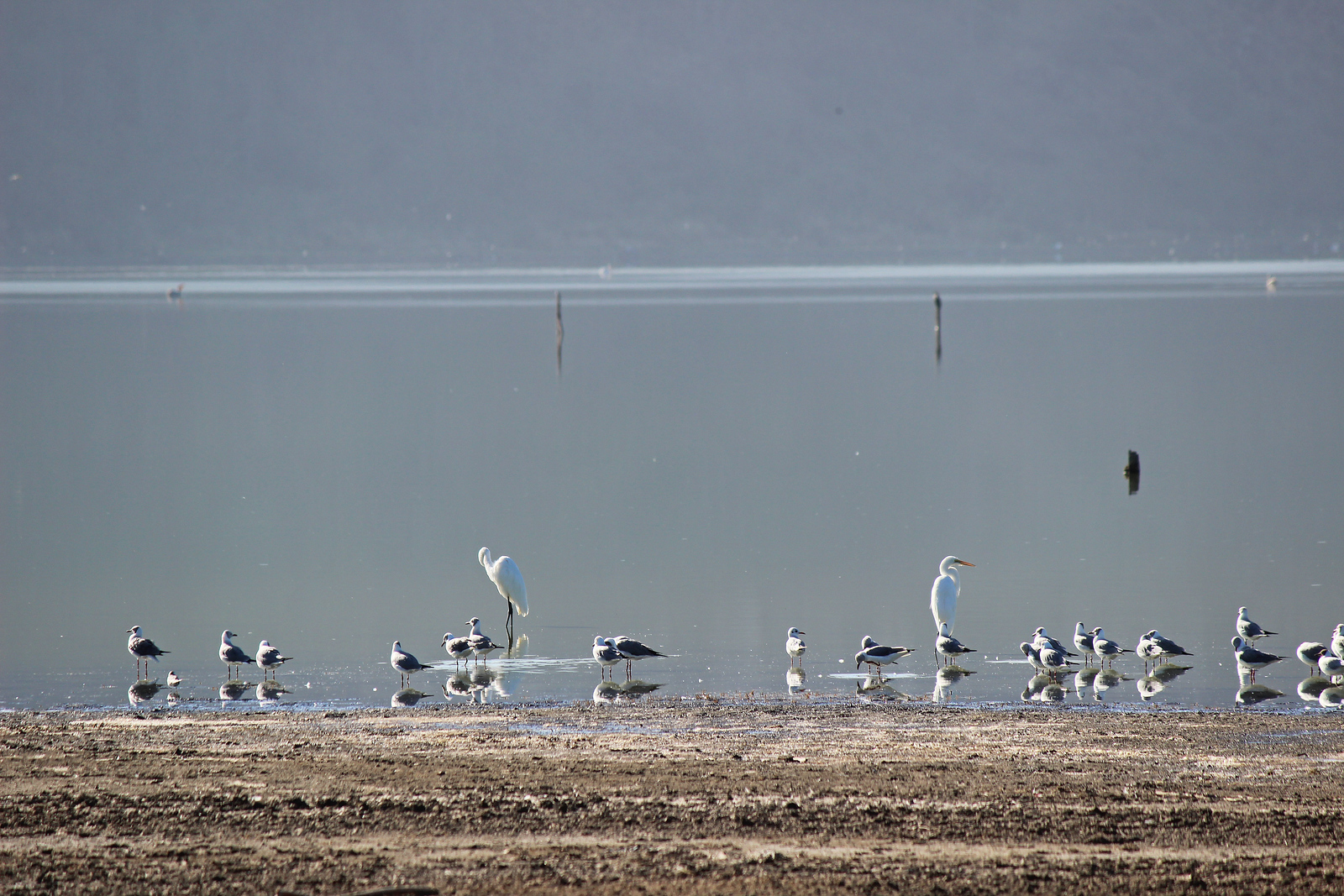 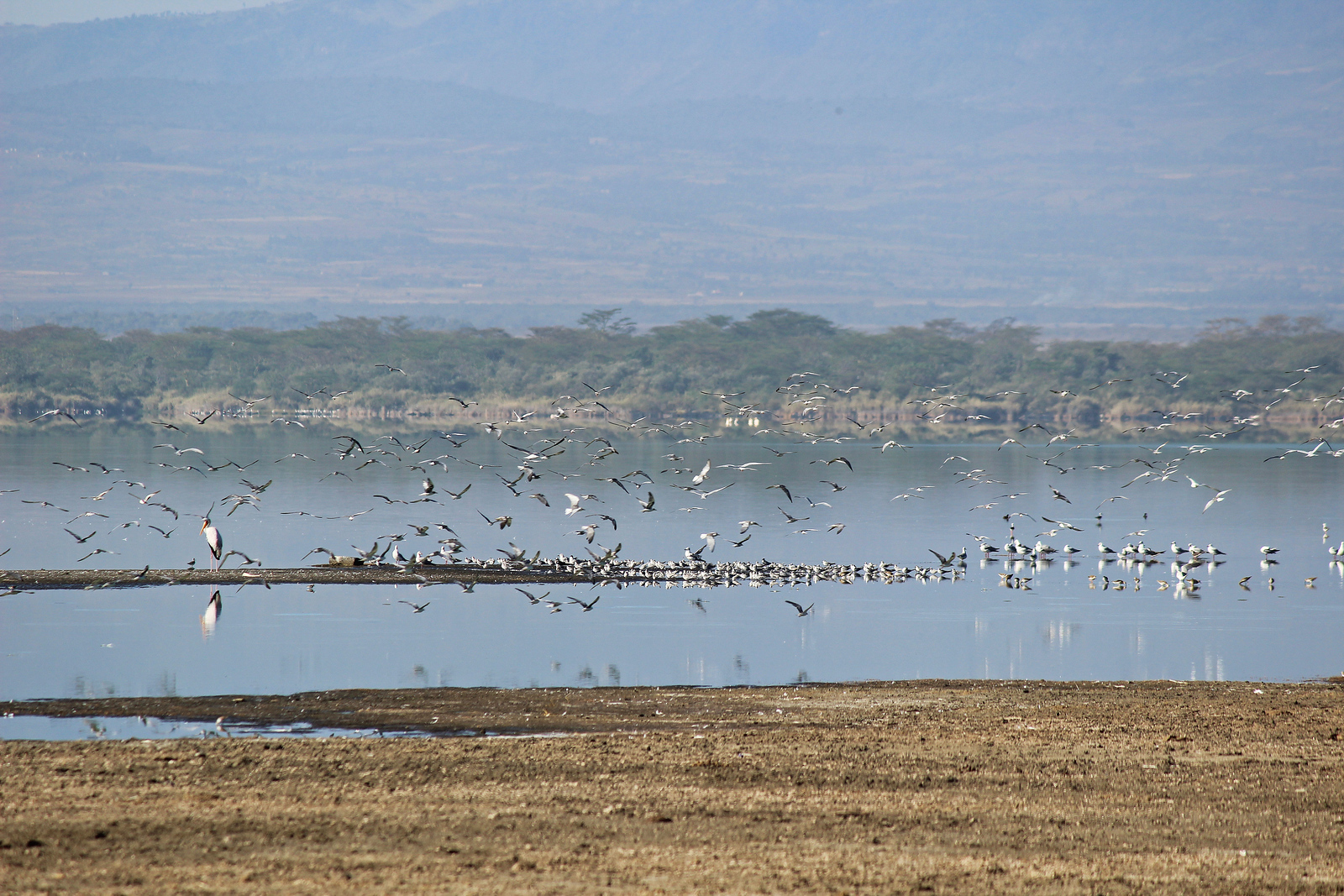 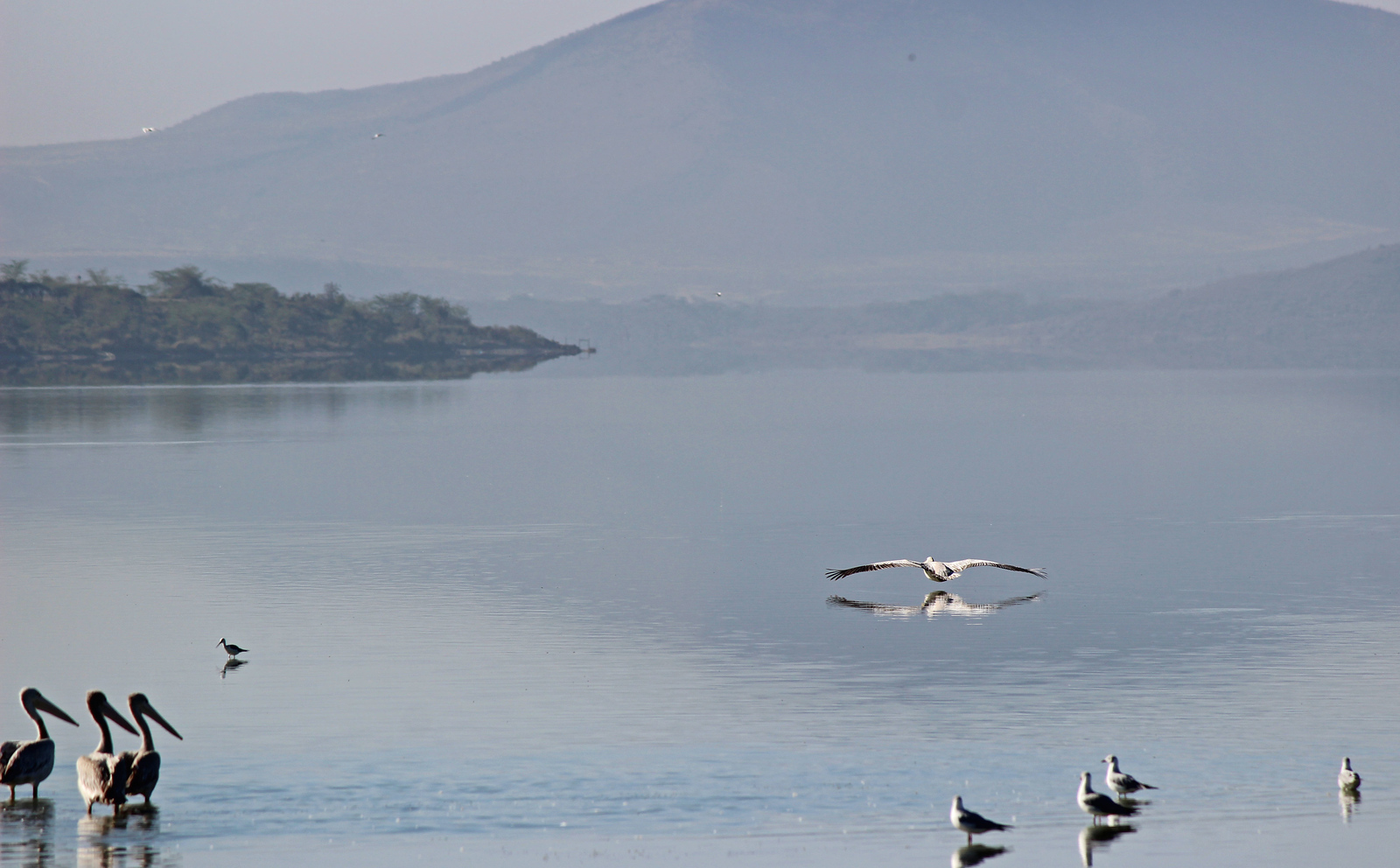 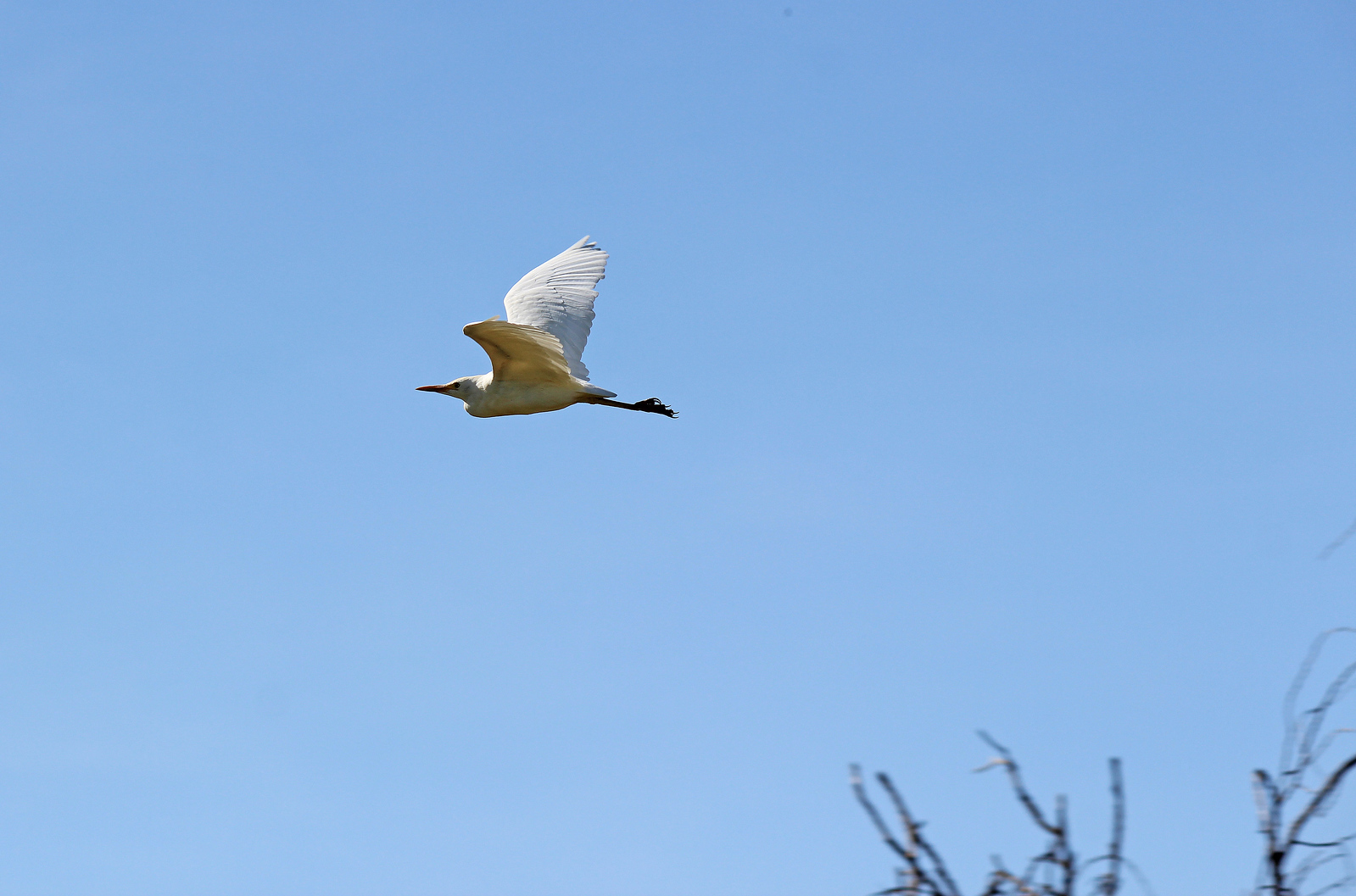 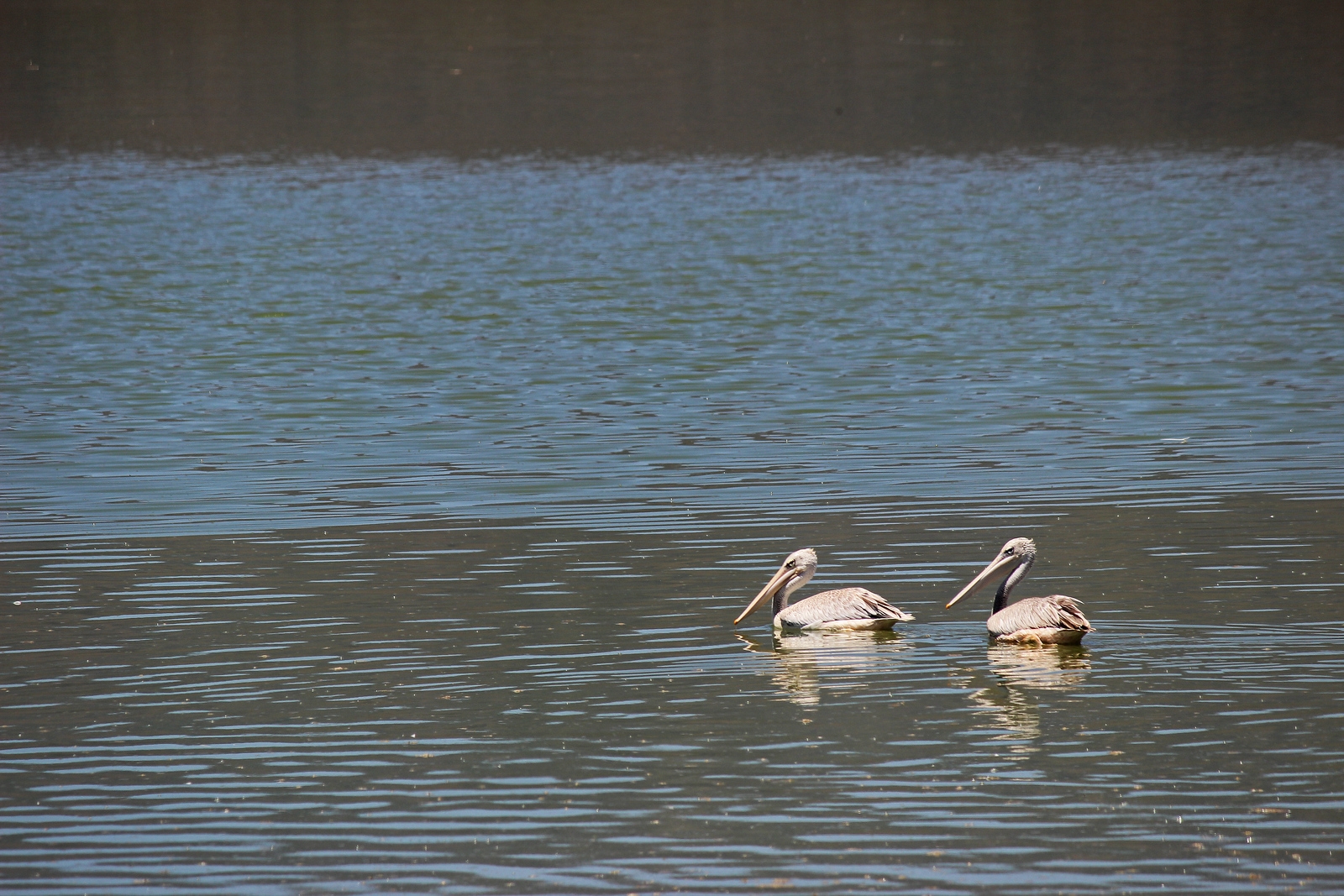 Do you want to see more bird photos? Check out my photo album of Soysambu Conservancy Birds! All of my photos are available for purchase, too! You can buy prints, canvas artwork, or have them printed on various household items. Please check out my travel photography album and click on the photos that you like for more details.

Like what you see here? I’ve written all about the animal wildlife that I encountered at Soysambu Conservancy. Check it out! 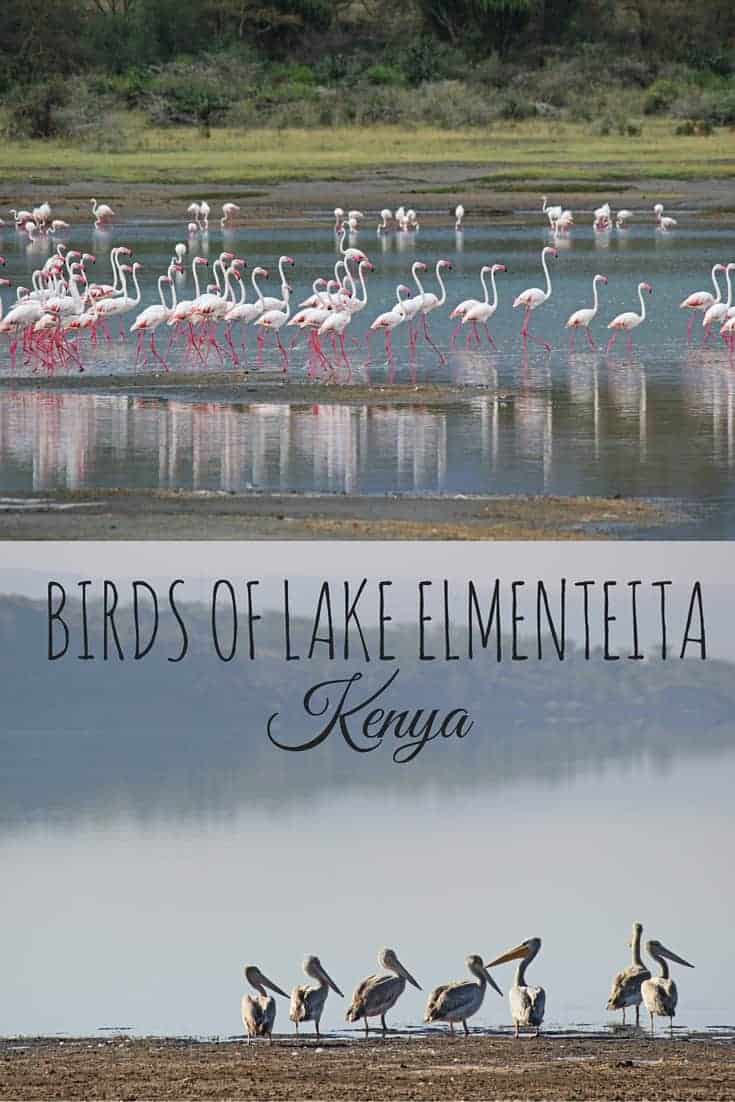 Do you like to go bird watching when you travel? Do you seek out wildlife on your journeys? Have you ever observed birds in Africa? Please tell me all about it in the comments section below!

I don’t know if it’s the greater or lesser flamingos but the ones with really pink legs are really pretty. It must take a lot of patience to watch and count all of them. How long do you normally stay with a species for before going to observe a different one?

Holy moly that’s a lot of birds. It’s great that you took the time to volunteer there!

Love the flamingoes! I love animal volunteering, giving a back back to nature. I did some dog volunteering in India last year, this year I plan to visit costa rica for the turtles

Love the flamingoes! I love animal volunteering, giving a back back to nature. I did some dog volunteering in India last year, this year I plan to visit costa rica for the turtles :)

Large birds freak me out, but this is beautiful!!