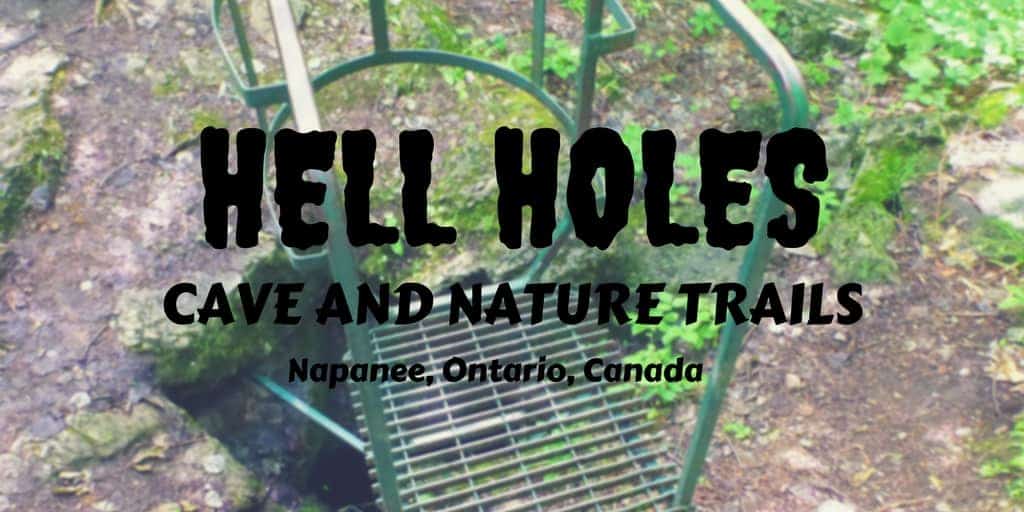 A long while ago, I saw a sign at the side of the highway that read, Hell Holes Nature Trail. I knew nothing about it, but it sounded pretty darn cool. That name stuck with me for a while. Finally, Justin and I had a day where we had nothing to do, so we decided to embark on a road trip to see Hell Holes with our own eyes.

Essentially, it is a cave in the middle of a forest, and you descend down a ladder into the ground to enter it. 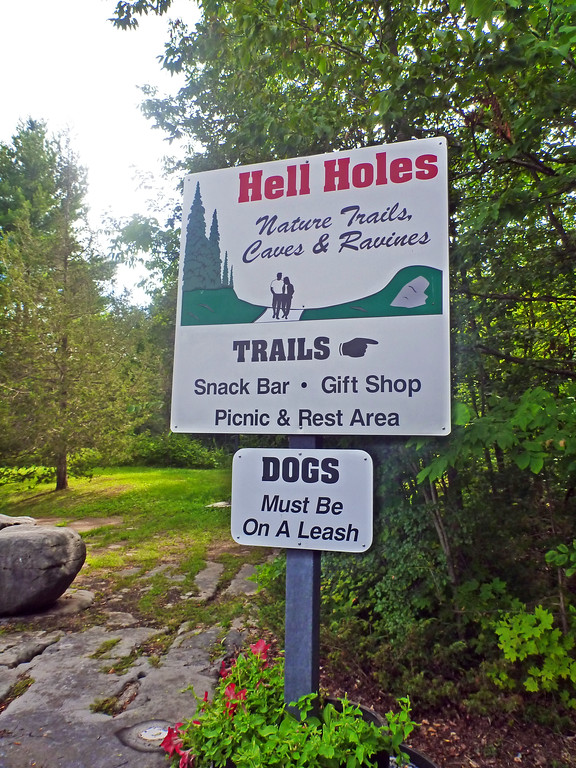 Upon our arrival, we went to the nature centre and paid the $7 fee to access the trails. The employee behind the counter handed us a printed map and described the sights we would see along our journey.

There are two things that you must bring with you: A flashlight, and bug spray. Well, a nice pair of hiking boots would work well, too. We brought a flashlight to visit the cave, but we didn’t even think about bug spray. Thankfully, there was a can of bug spray on the counter of the nature centre, and we were allowed to use some. The employee seemed to think we were naive, city dwellers for not bringing our own bug spray. She was right. 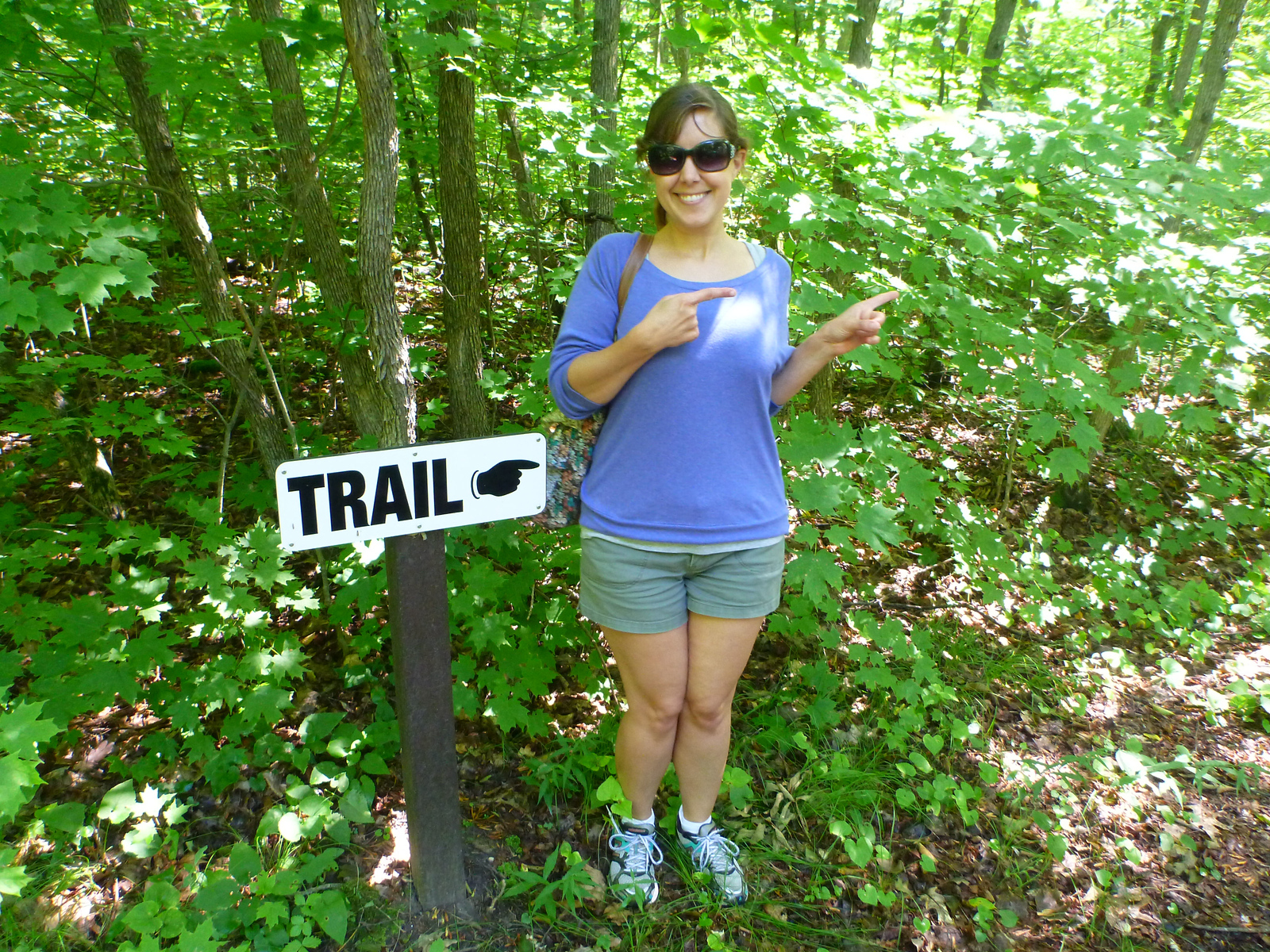 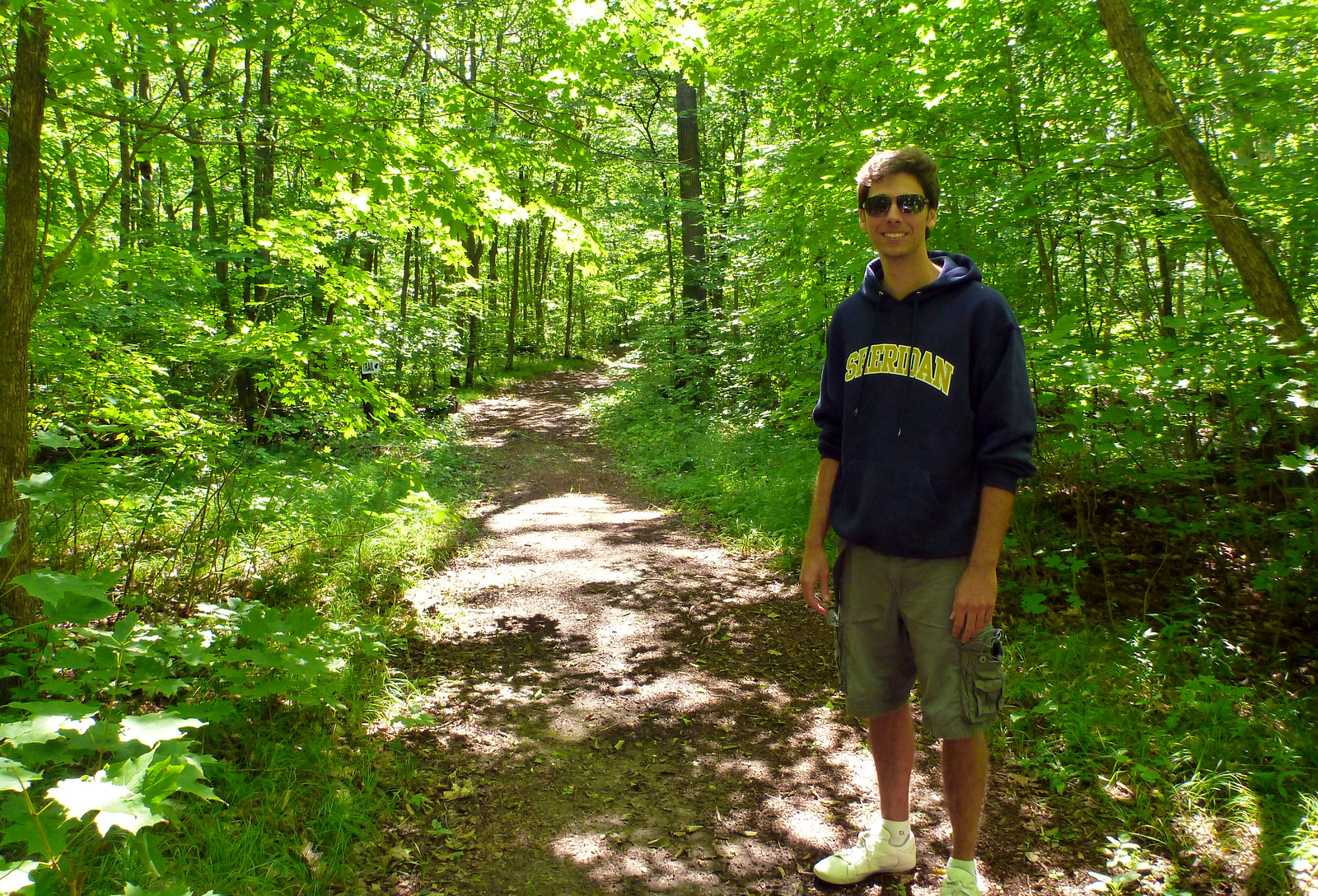 The forest was absolutely gorgeous. Everything was just so green. The sun had emerged from behind the clouds and was shining through the leaves. Bright green moss was growing on all of the rocks. The tree roots grew around the boulders, still supporting its limbs.

It was very peaceful and there was not another person in sight. 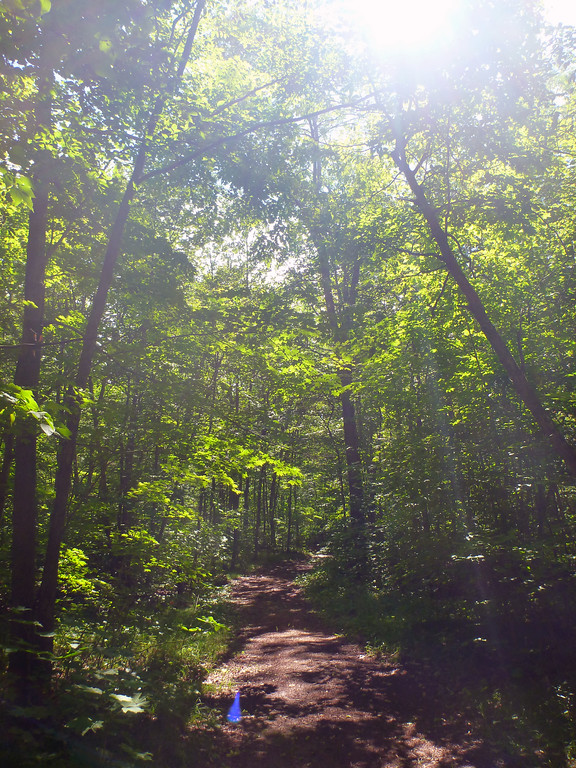 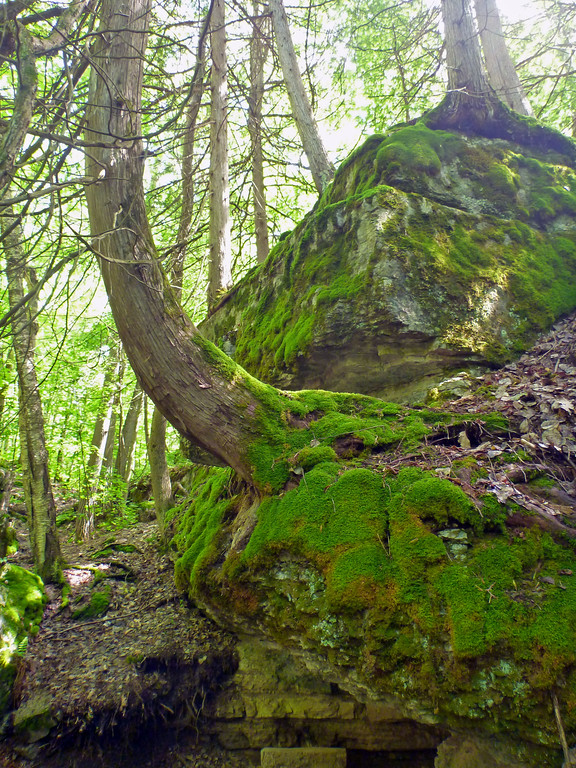 We reached the Devil’s Horses Stable Cave, which visitors cannot enter. Legends say that Satan used to stable his horses here, hence the name. It used to be a cavern that descended deep into the Earth’s surface, but it collapsed in the early 1900s and has been permanently closed for safety reasons. It was still a neat place to stop and admire the shapes of the rocks. 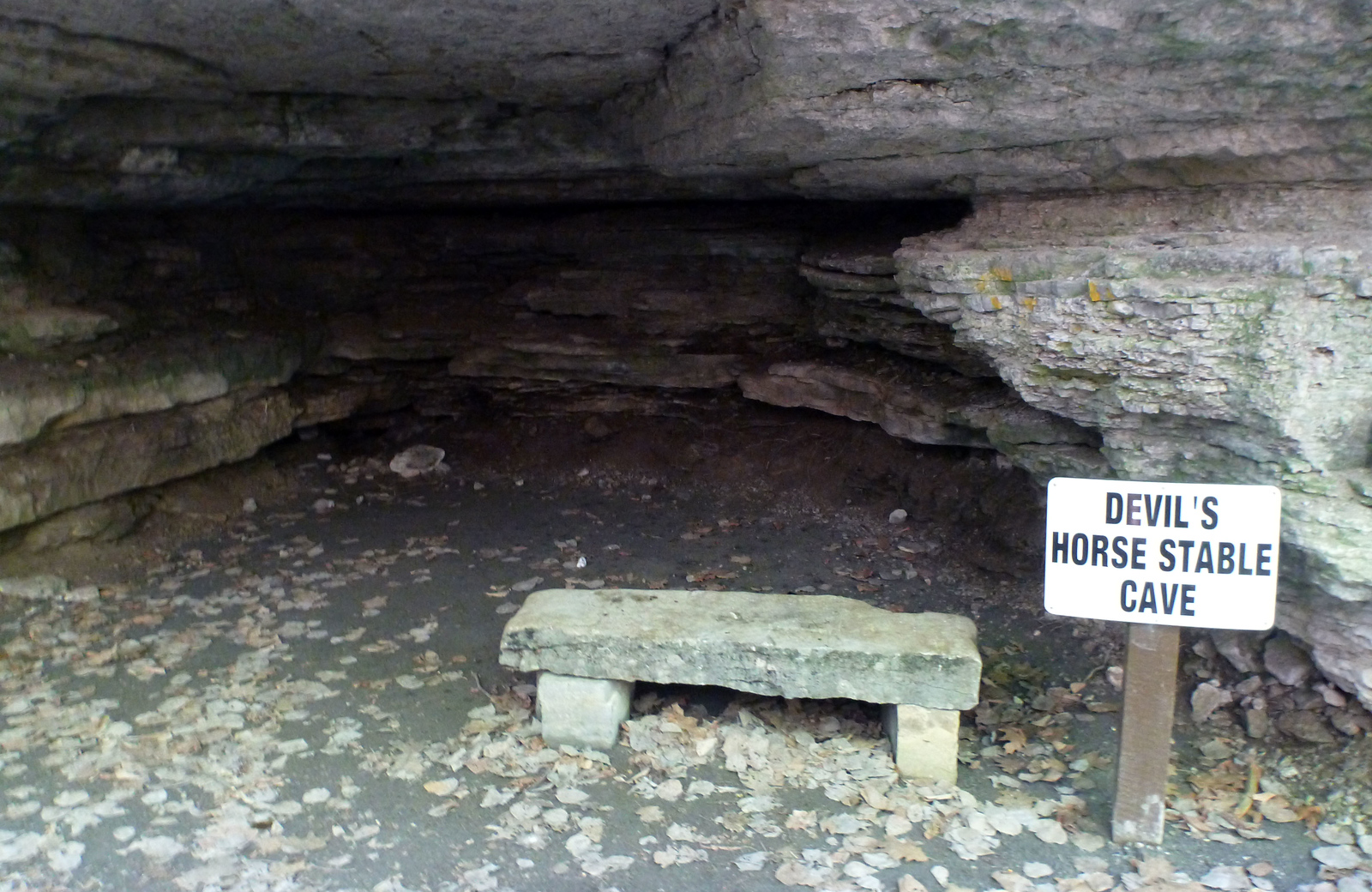 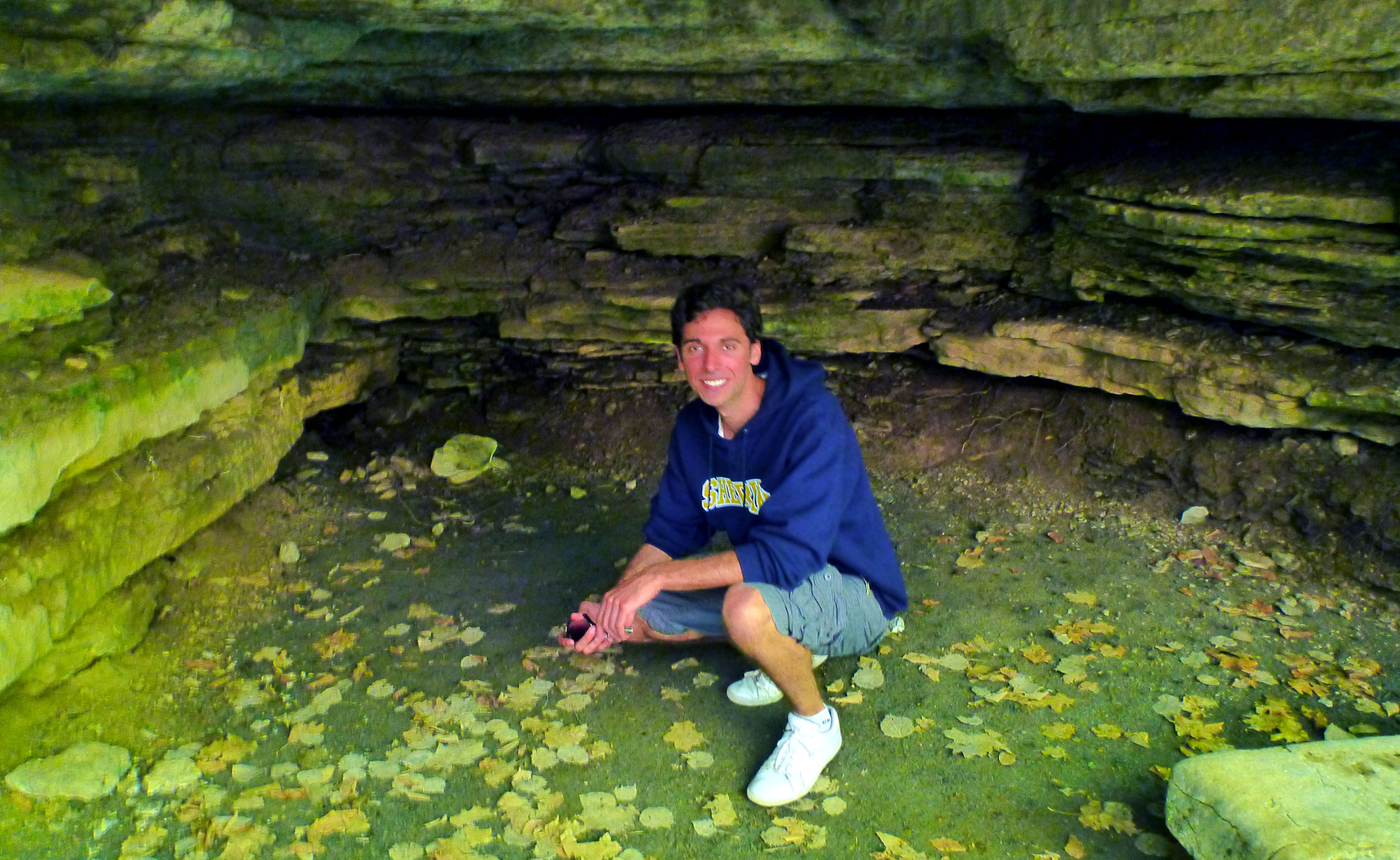 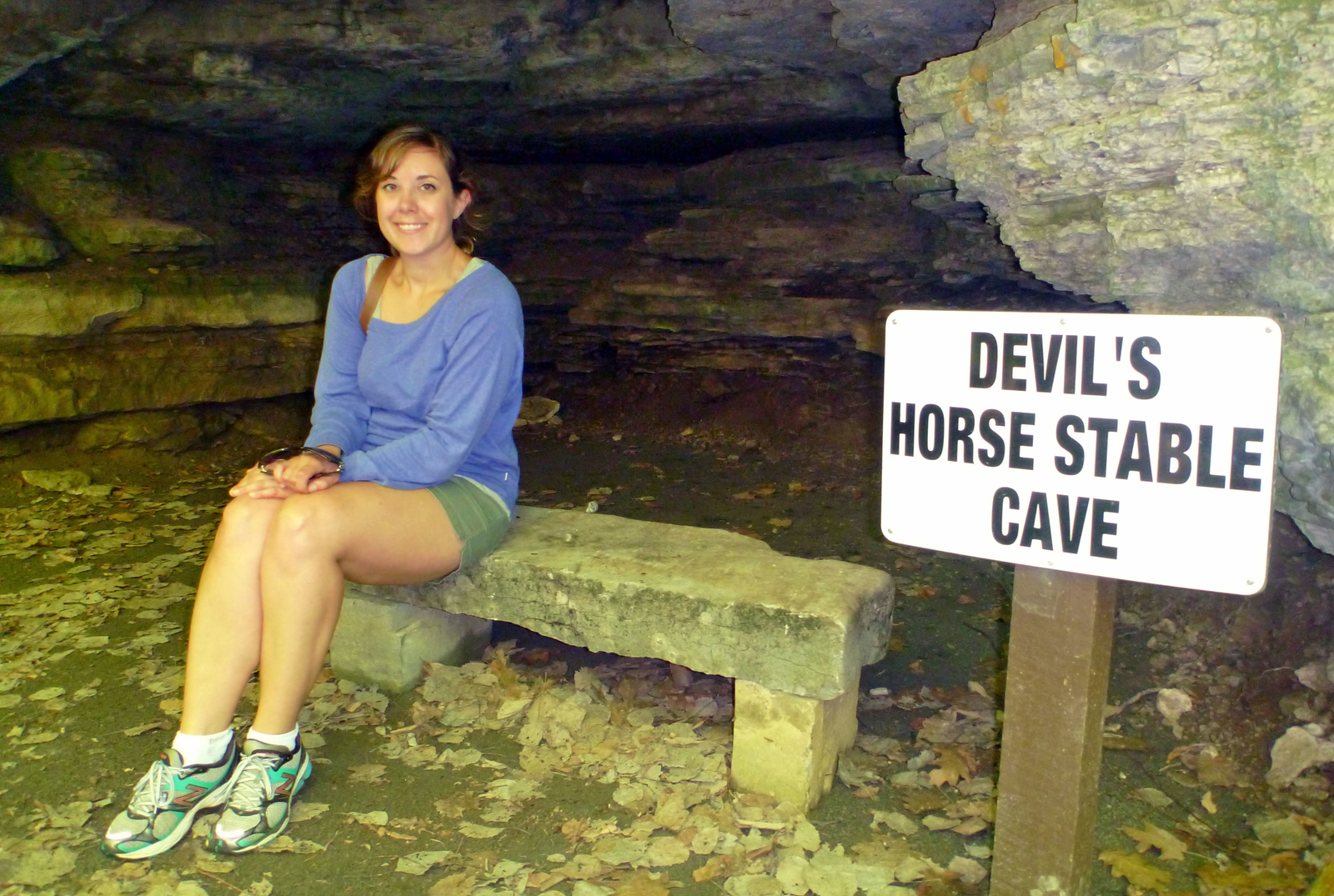 And now for the main attraction: the Hell Hole cave. A short walk away from the Devil’s Horse Stable Cave was a hole in the ground with a ladder sticking out of it. We reached our main destination.

I have to admit, I felt a bit on edge. The steps descending into this small hole in the ground was rather intimidating. Who knew what was down there?

Within moments, we heard voices coming up from down in the hole…the voices of young kids! As it turned out, a family with three young children were already down in the cave. Shortly after we arrived, they came back up. Two young boys and a girl absolutely loved the adventure of being down inside the cave.

I told the kids that I was a little bit scared, and they told me that I had no reason to be scared. I figured….well, if these little kids aren’t afraid, then I shouldn’t be either. Needless to say, I still made Justin head down into the cave first.

DOWN INSIDE THE HELL HOLE

We descended 7.5 metres into the cave and reached the bottom. At first, it seemed a little bit narrow, but the cave eventually opened up into a larger cavern. We were very glad that we brought the flashlight or else we wouldn’t have seen a thing.

In the larger “room”, there was a thermometer that showed just how cool it was down there. It was a humid, summer day outside above ground. Down below, it was only about 8 degrees Celsius. Good thing we brought our sweaters! 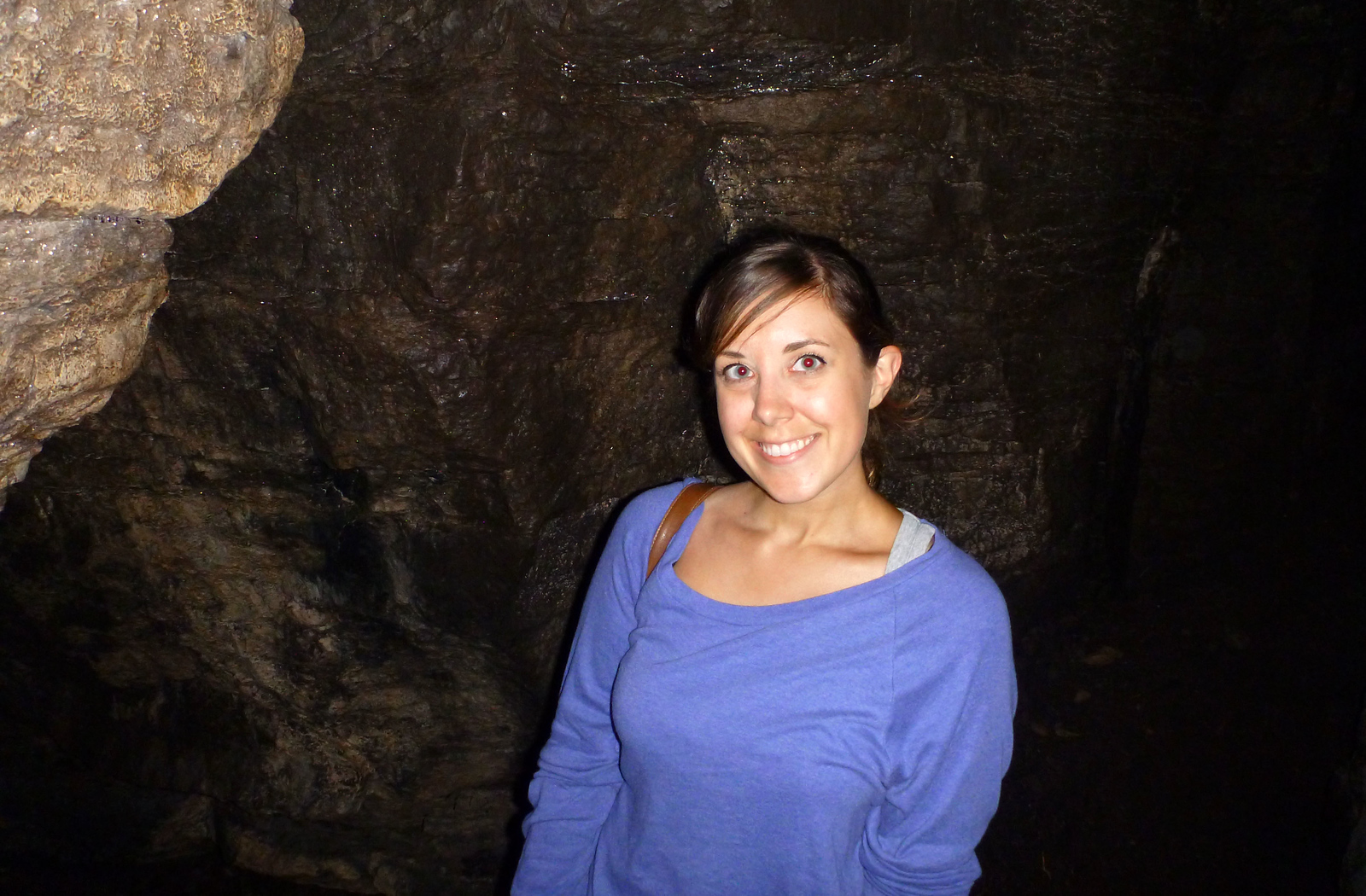 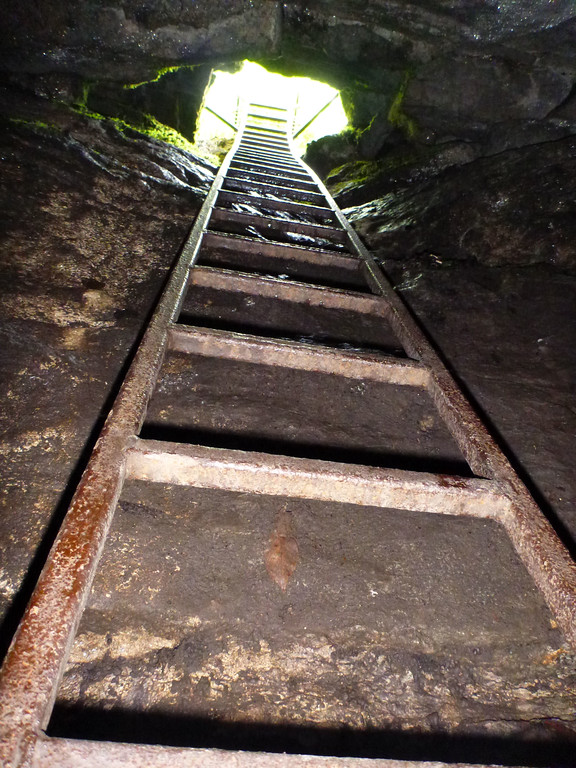 A WALK IN THE FOREST

We emerged back up to the surface after spending some time down in the cave. We continued along our hike in the forest towards a natural stone bridge, which we crossed before descending down into a valley.

The forest was surrounded by giant limestone boulders covered in lush moss. Ferns poked out between the rocks and it was almost like being in a tropical rainforest.

There were massive layers of rocks stacked one on top of the other.  Nature can be so incredible. 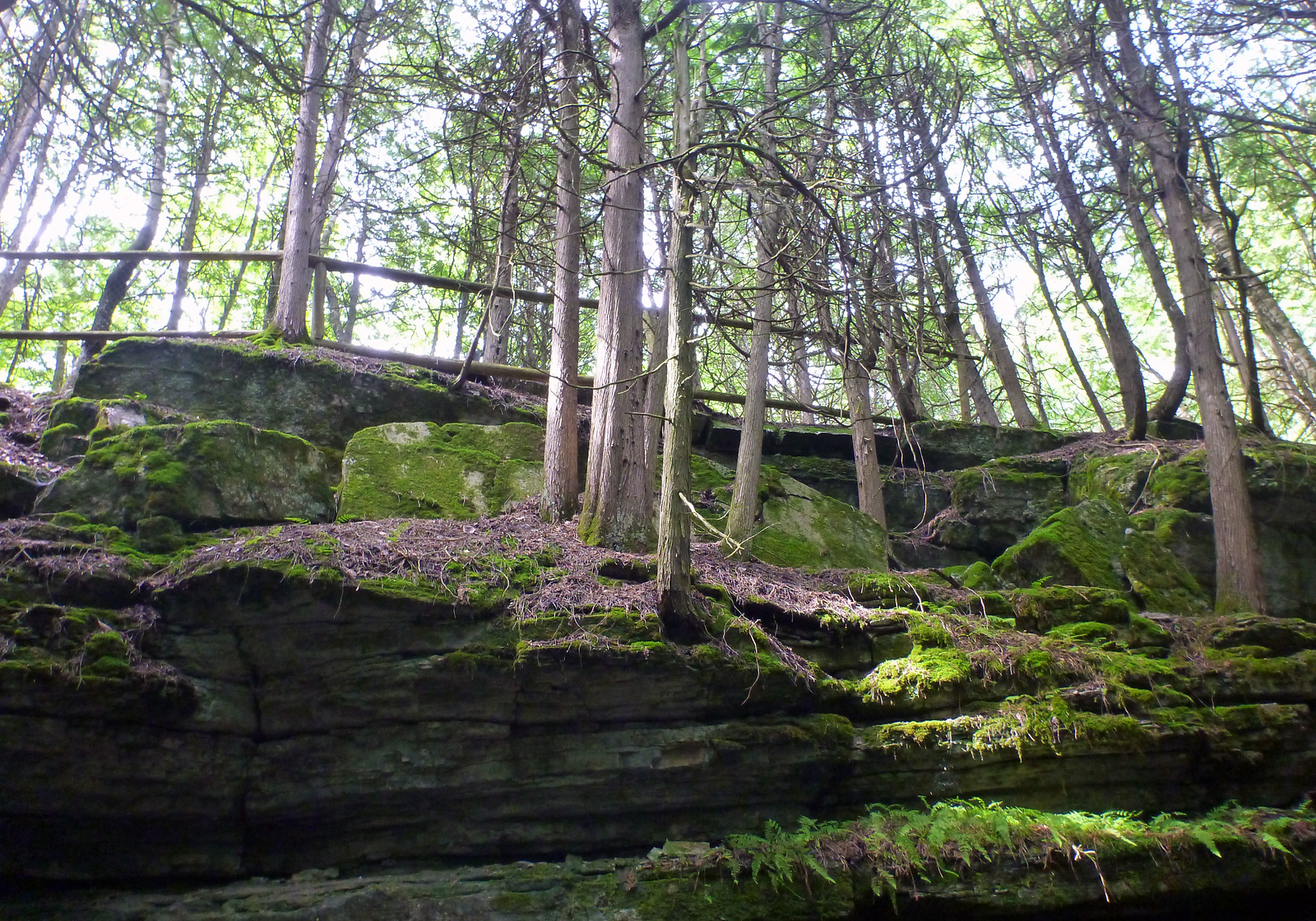 Pillar Rock was an intriguing rock formation. Larger parts of the boulder balanced on top of columns of rock. We continued our hike through the forest and marsh on a 3km path. 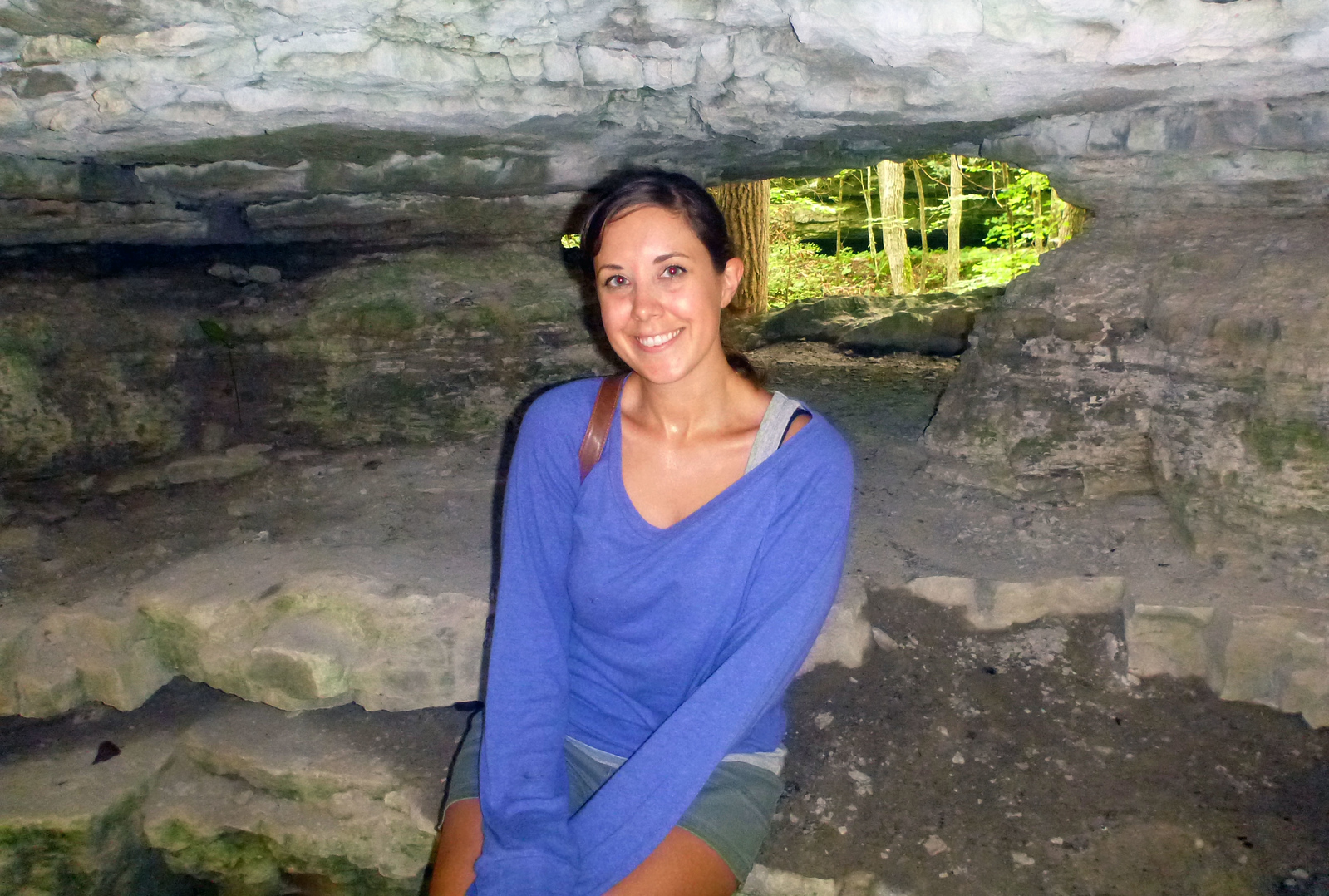 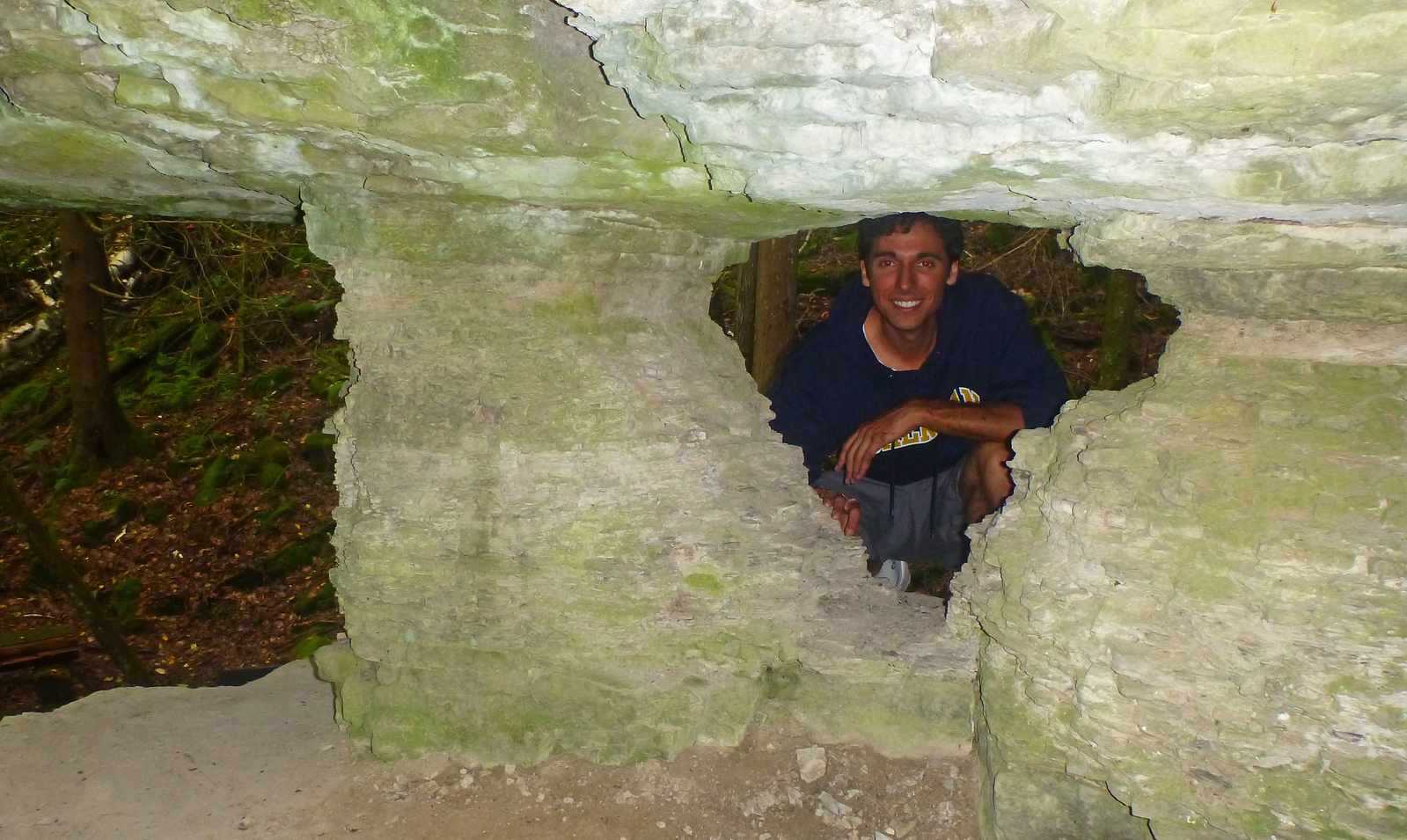 Trust me on this one.

As we descended down into the valley, the bug population seemed to increase. We sprayed ourselves with the bug spray from the office, but maybe some of it had worn off or we didn’t spray enough of it. Or maybe it’s better to bring it along with you to reapply. They were everywhere.

The bugs seemed to really like Justin’s dark hoodie and clung to his back like crazy. We were constantly swatting the bugs away while we were walking.

At one point, I made the mistake of informing Justin that there were at least 30 bugs stuck to his back, and he took off running down the trail, hoping to get rid of them. It was pretty entertaining to see him flailing his arms all around. We tried our best to ignore these annoying little creatures and made the best of the rest of the walk.

Next time: bring bug spray or some sort of deterrent and use often!

Towards the end of our hike, we stumbled upon a giant Inukshuk, erected in 2010. 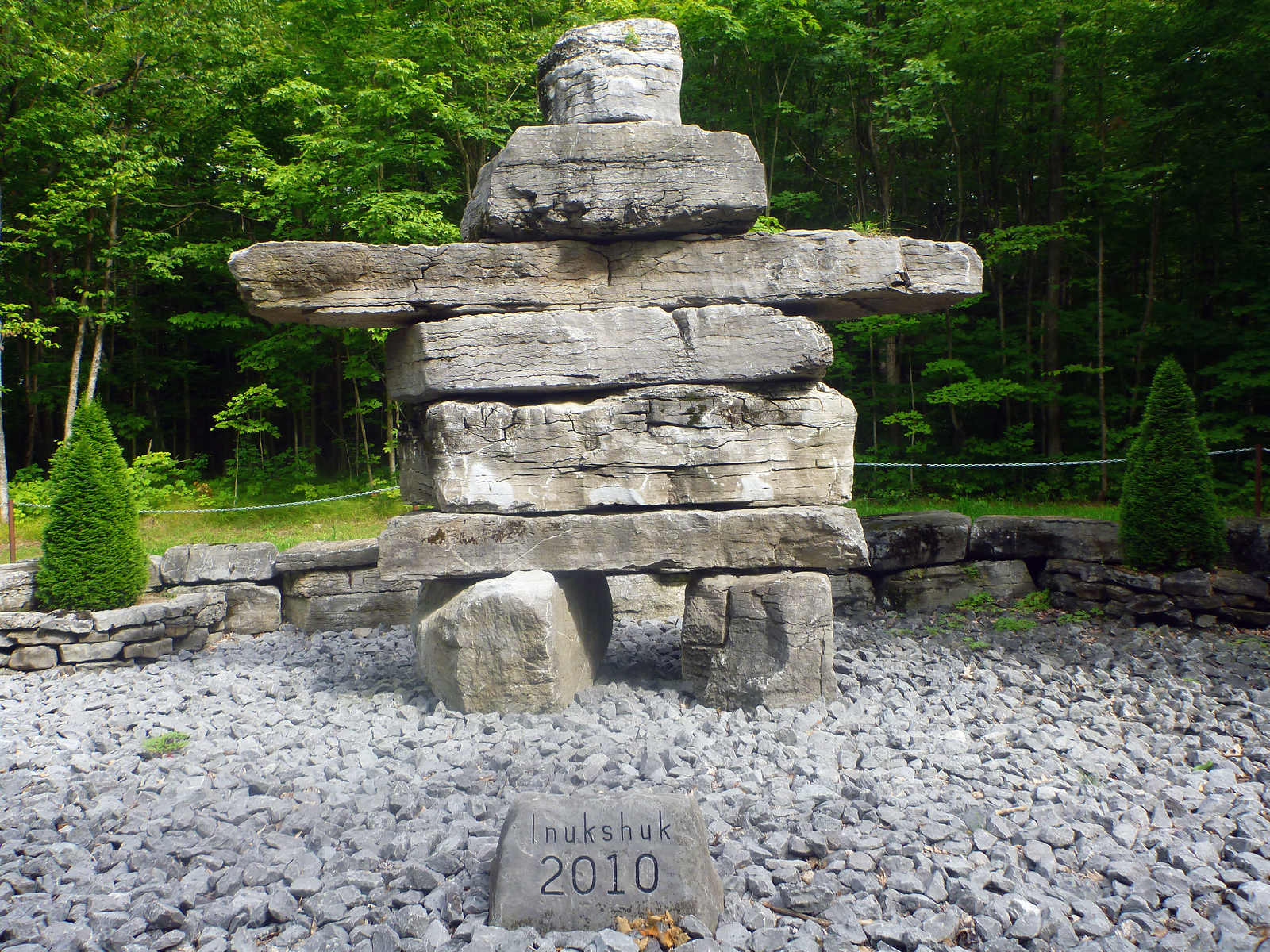 Looking for somewhere to stay on your way? It’s always good to plan in advance, especially during busier summer months.

If you’d like to stay right in Napanee, there are a few choices:

You can also stay in the nearby city of Kingston. Kingston is an excellent addition to your trip. We went stand-up paddleboarding on the St. Lawrence River at Kingston’s waterfront and had a really fun time.

We’ve stayed overnight in Kingston before at the historic Hotel Belvedere. It’s a charming, beautiful old home filled with antiques. Check out reviews of Hotel Belvedere on Tripadvisor.

Here are a few other Kingston hotels worth checking out: 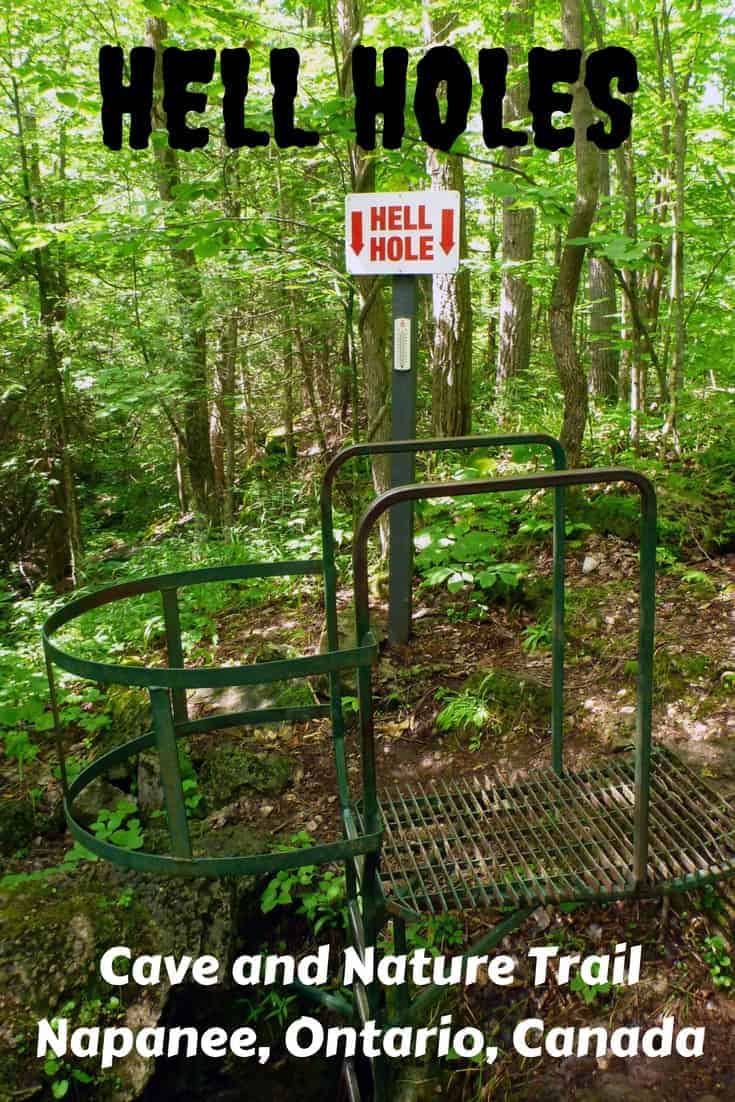 Have you ever climbed down into a cave before? Do you have a favorite hiking trail that also includes a cave?