Pumpkinferno: A Pumpkin Lantern Festival That’s Worth the Road Trip (Near Ottawa, Ontario) 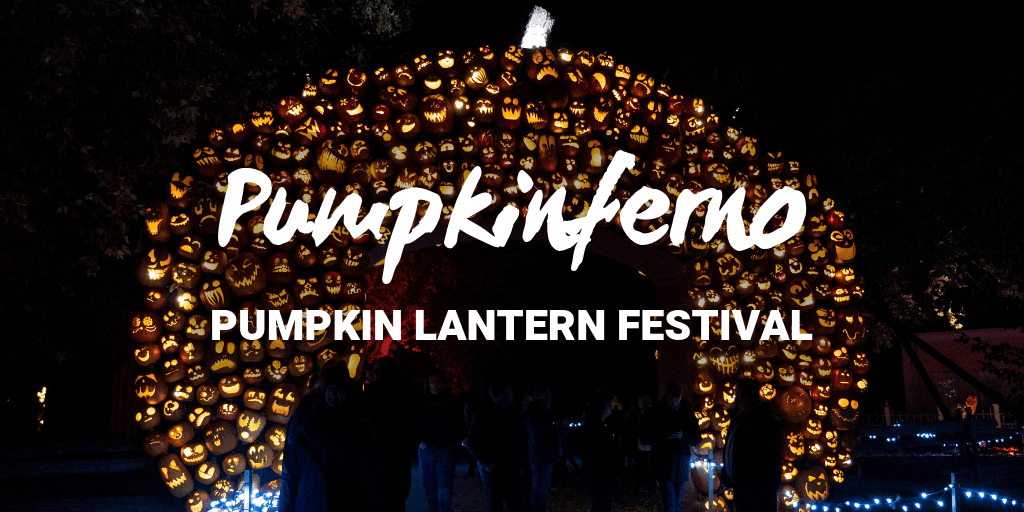 Pumpkinferno is an annual pumpkin lantern festival that delights the senses.

Ah, there’s nothing quite like brisk fall evenings. Fallen leaves rustle below my feet. The cool breeze hits my face. It’s all a reminder that summer days have passed. It’s sweater weather and time to sip warm beverages. Harvest season is upon us as we savour things made of apple, squash, and pumpkin. Thanksgiving here in Canada has come and gone; it’s time to celebrate the macabre and mischievous, the spooky and the startling. Yes, it’s Halloween and it’s one of my favourite holidays (and not jupst because I have a sweet tooth!).

There are many Halloween events in Ontario, but nothing quite like this one. Pumpkinferno at Upper Canada Village is an annual pumpkin festival like no other. This 19th century village is transformed into a massive pumpkin lantern festival with over 7000 pumpkins carved into intriguing and thoughtful displays. This spectacle will get you right into the Halloween spirit with thousands of artfully carved pumpkins lining a 1km path. Walk along this glowing pumpkin trail to gaze at unique and impressive light displays.

About this Pumpkin Lantern Festival

Many of the pumpkins are fused together into interesting and awesome characters, animals, and objects. They are designed by a talented young group of local artists from Eastern Ontario. They started this project in 2012 and add more creations and exhibits every year. While there are many Halloween events in Ontario, there’s nothing quite like Pumpkinferno. 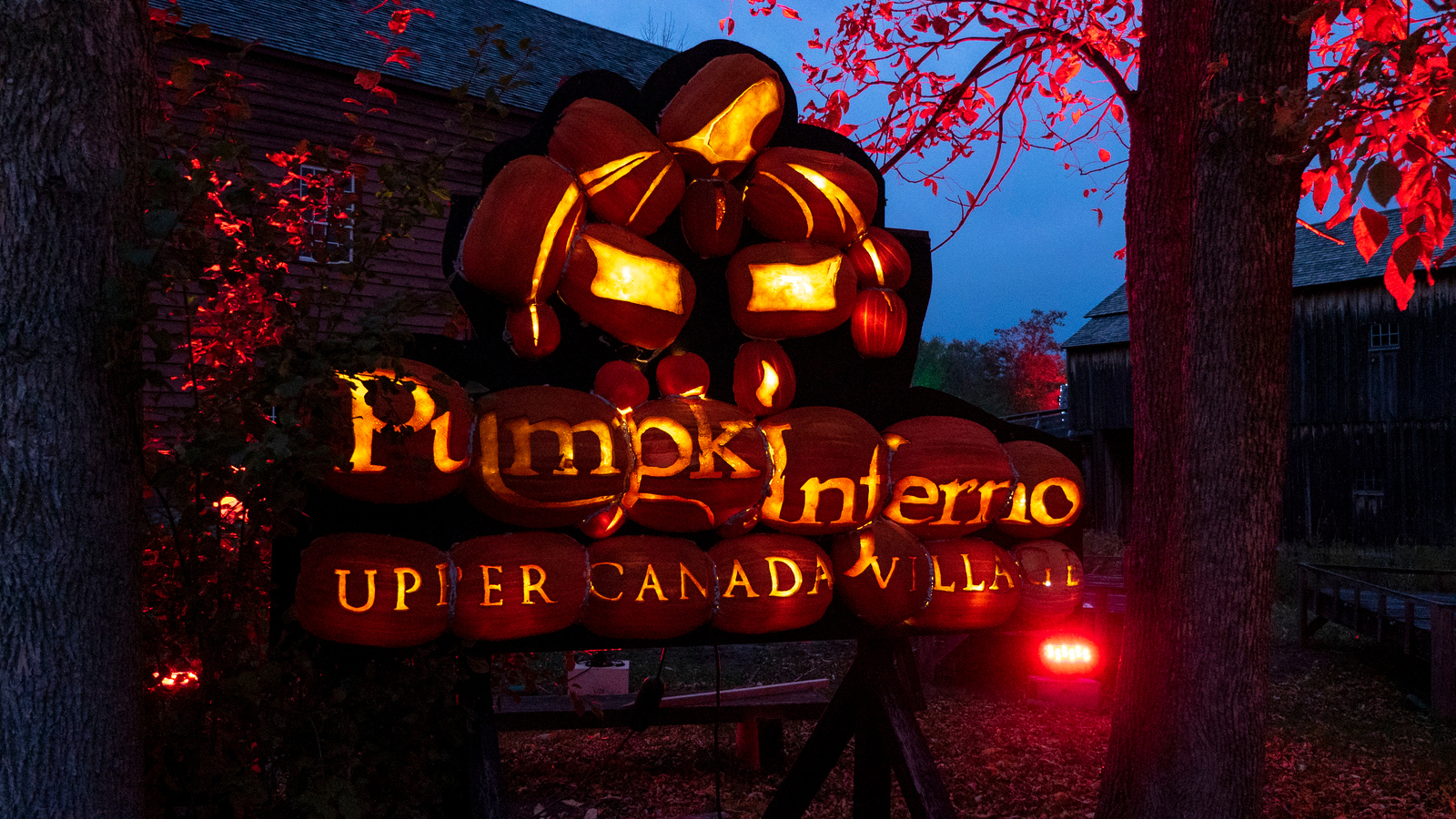 The Exhibits at Pumpkinferno

The 1km pumpkin trail loops around Upper Canada Village, and it will take you about 45 minutes to check out every display (unless you’re a travel blogger taking photos and video – I spent about 1 hour and 15 minutes in total). There are dozens of exhibits with all different themes, showcasing animals, history, art, Halloween, and more. While you can feel the fall spirit throughout, many displays at this pumpkin lantern festival don’t relate directly to Halloween at all. It’s all about fun for the whole family, highlighting the creativity of the artists. Here are a few of the displays to discover at Pumpkinferno. 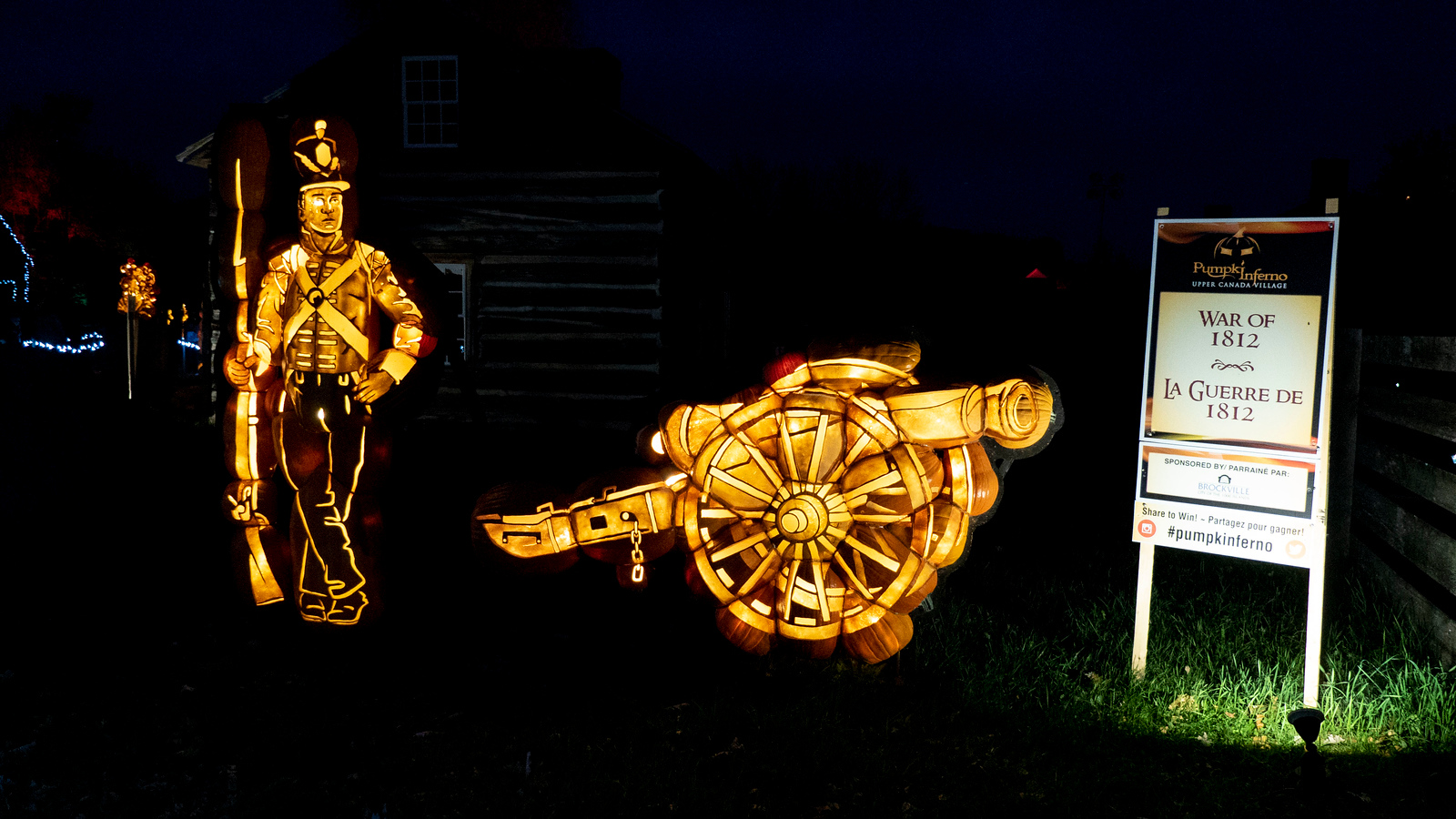 The War of 1812 exhibit showcases a soldier made out of pumpkins to commemorate the victory of the Anglo-Canadian army. There’s actually a battlefield memorial and monument just west of Upper Canada Village, illustrating and remembering this important battle that halted the invasion of Canada. It’s only fitting that this pumpkin lantern festival pays tribute to a significant moment in history that happened so close by. 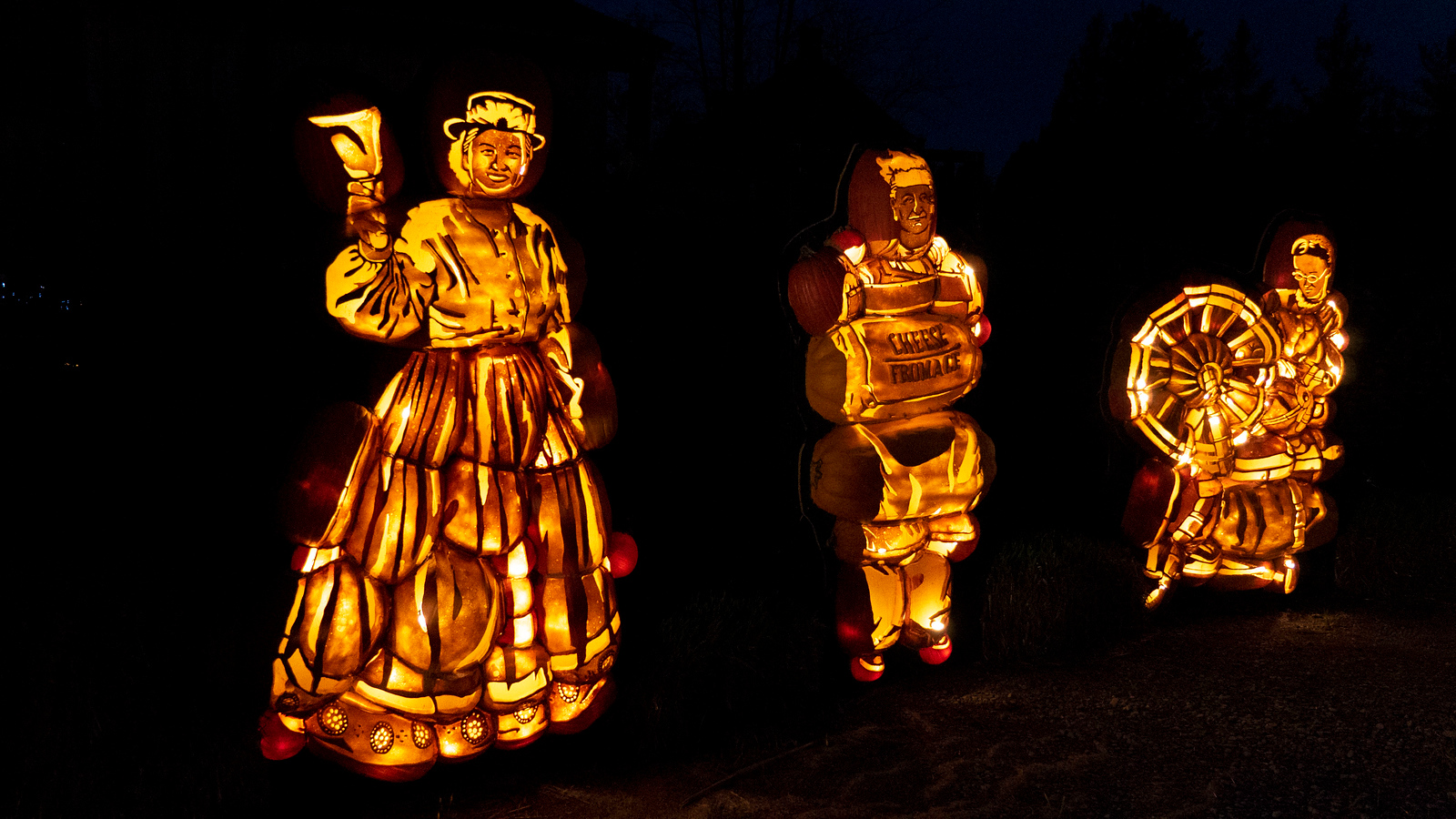 It’s the friendly faces you see on a daily basis at Upper Canada Village, in pumpkin form! These are some 19th century characters you meet on a trip during the day here, including the teacher, cheese maker, and spinner.

Legends from our Lands 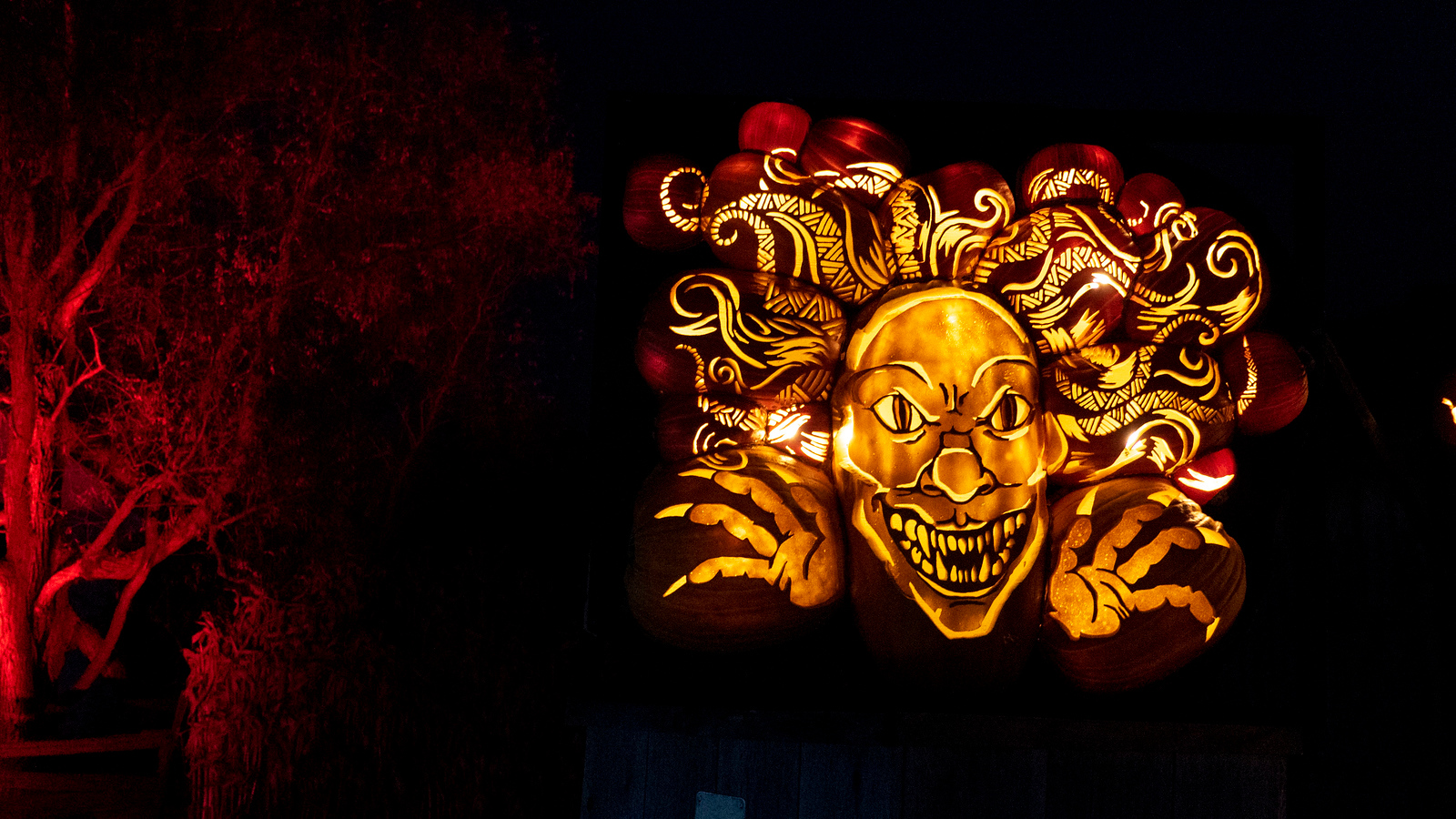 The Pumpkinferno artists worked alongside Akwesasne artist, Victoria Ransom, to showcase a number of ancient legends. Some of these include: “Three Sisters”, “Flying Head”, “Celestial Tree” and “Atotarho”. 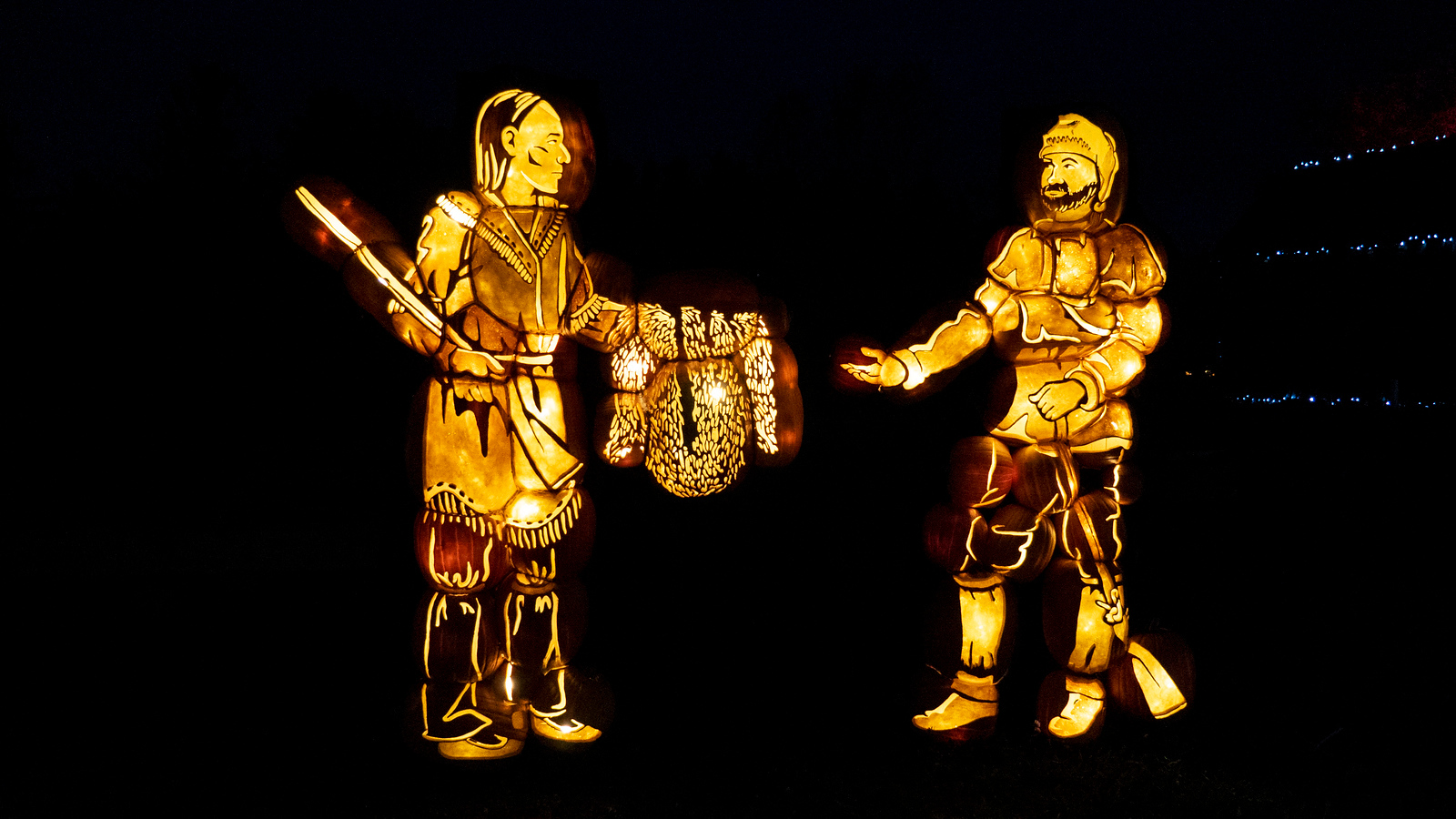 Another historical display at the pumpkin lantern festival, this demonstrate the role of the fur trade in the formation of Canada. There were social, economic, and colonial relationships between the Indigenous people and the Europeans, as illustrated in this scene. 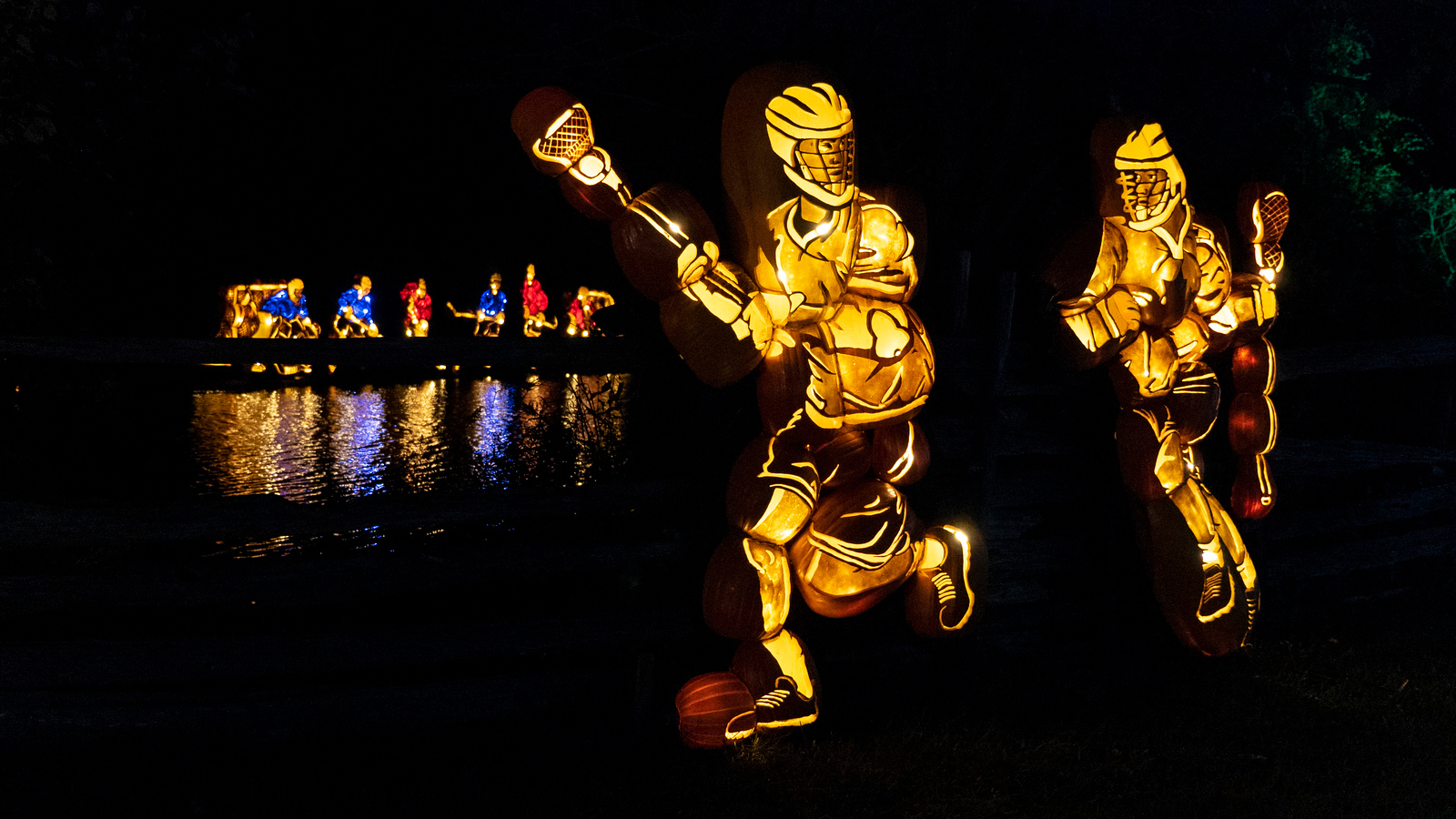 It’s Canada’s iconic sports presented in carved pumpkins! These pumpkin exhibits highlight lacrosse, snowshoeing, ice fishing, and of course, hockey! I really loved how the hockey players were literally positioned across the pond, not frozen at all yet. The lights reflected in the water in brilliant shades of red and blue from the team jerseys. 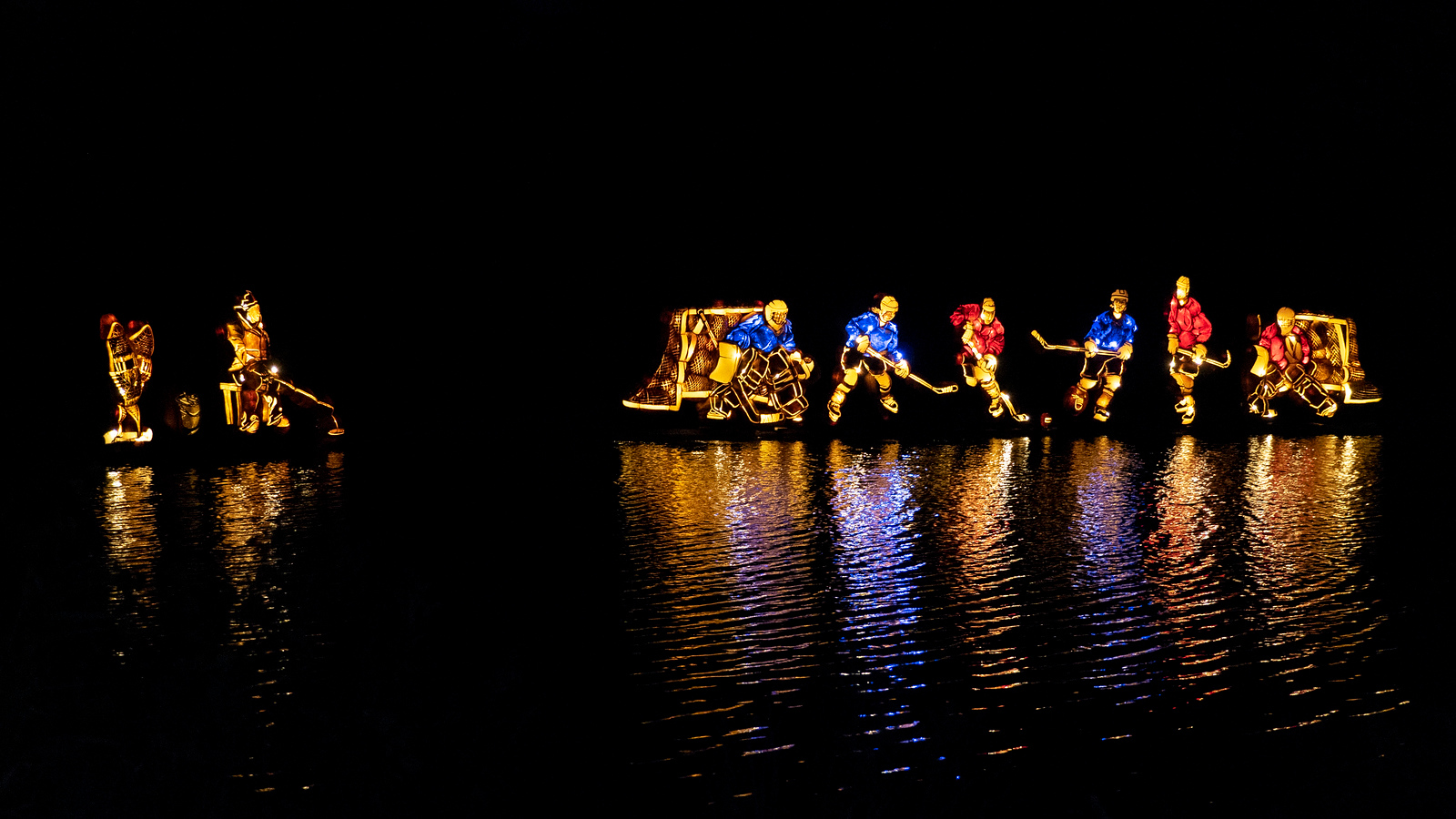 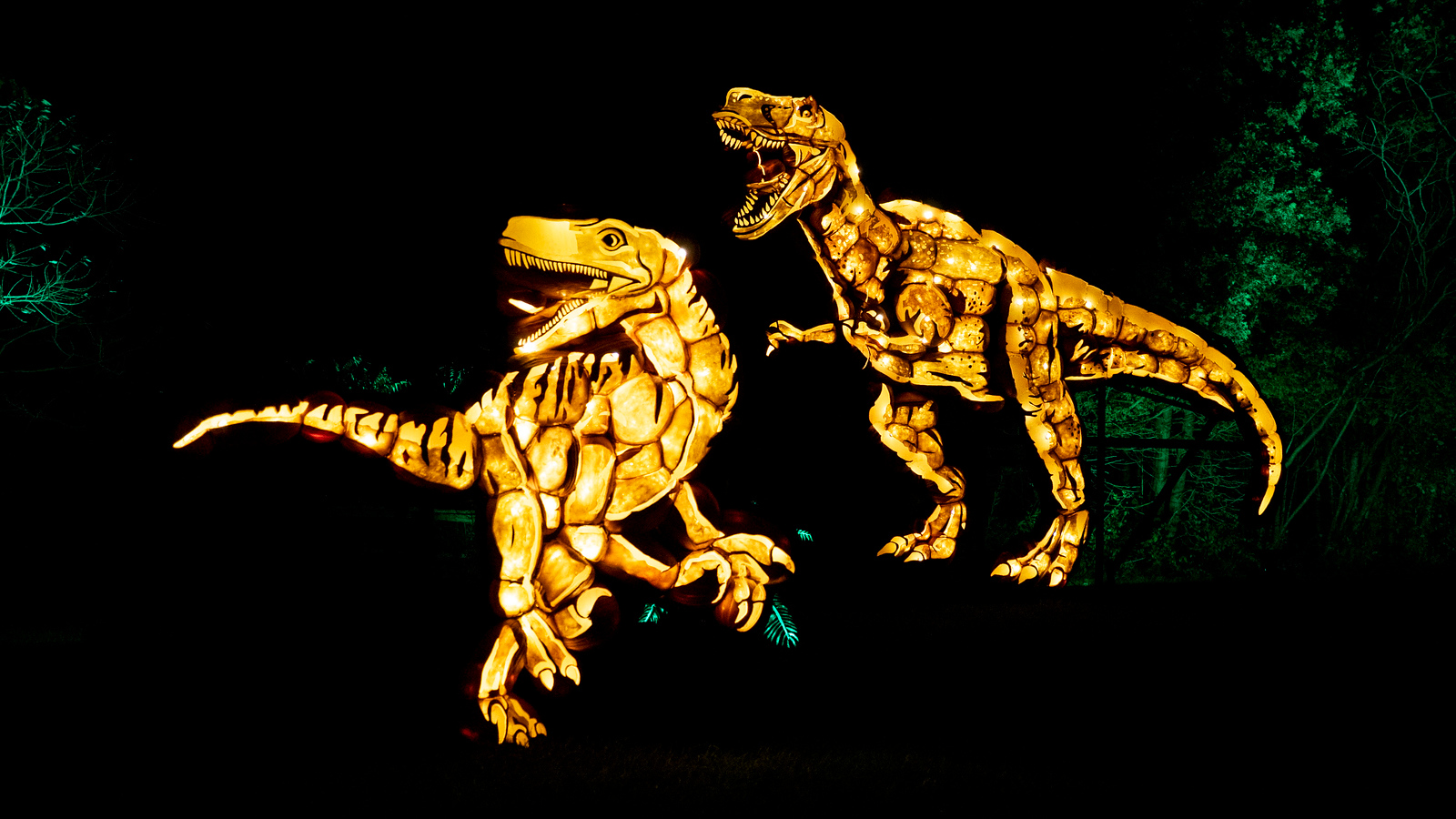 This one is a favourite among the kiddos in the crowd, both young and old! There aren’t only shapes of dinosaurs at this pumpkin lantern festival. You can also hear the roars and sounds of the dinosaurs, too. Pumpkinferno is a feast for the senses, including both sight and sound. Which dinosaur is your favourite?

If the exhibit with the hockey player pumpkins didn’t sum up Canada, the Great White North exhibit surely does. After all, Canada is the Great White North and known for its snowy winter season and land that reaches the arctic circle. There are snowflakes carved into the pumpkins suspended from the trees above roaming polar bears and an igloo home. A pumpkin inukshuk and dog sledding huskies complete the scene. 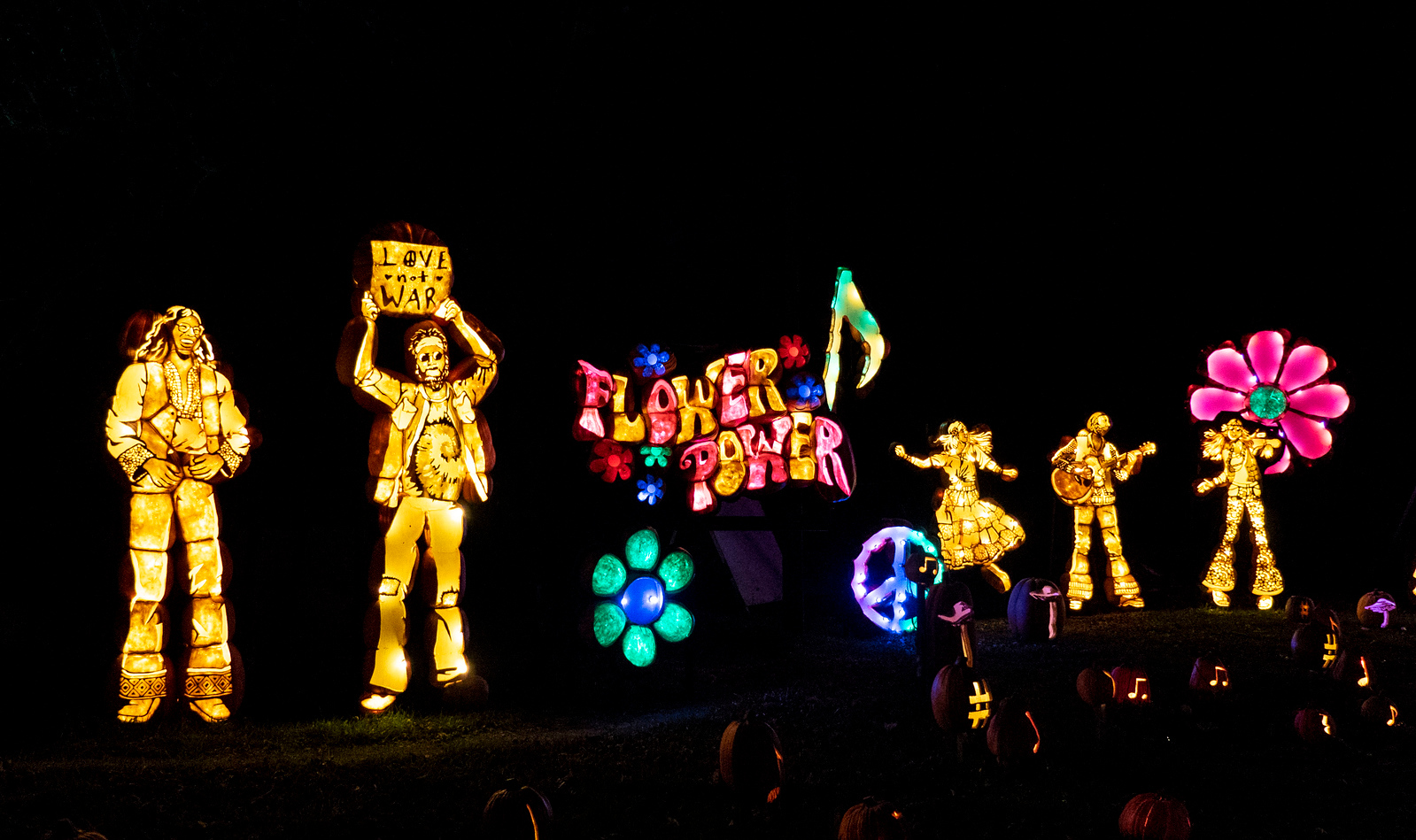 I think this was my favourite exhibit of them all. The Psychedelic Sixties at Pumpkinferno is a dazzling display of lights, sounds, and well, pumpkins! Are you a hippie or a flower child? You’ll need to check out this groovy exhibit with a Volkswagen van, peace signs, hippies, and rock stars. There’s even a huge screen with trippy and bright imagery. The pumpkin lanterns light up in time to the music, whether you hear White Rabbit or Light My Fire blaring from the speakers. 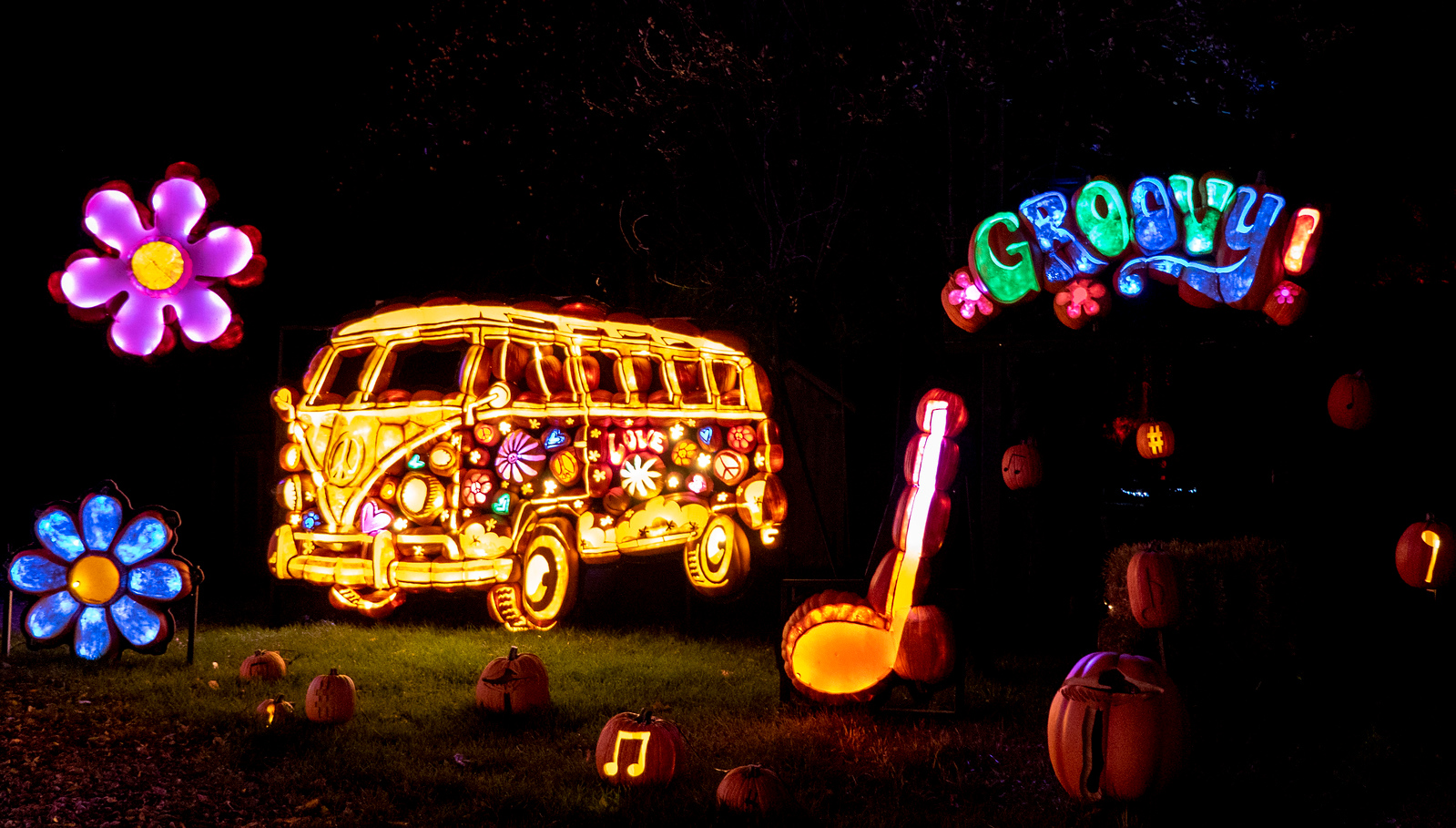 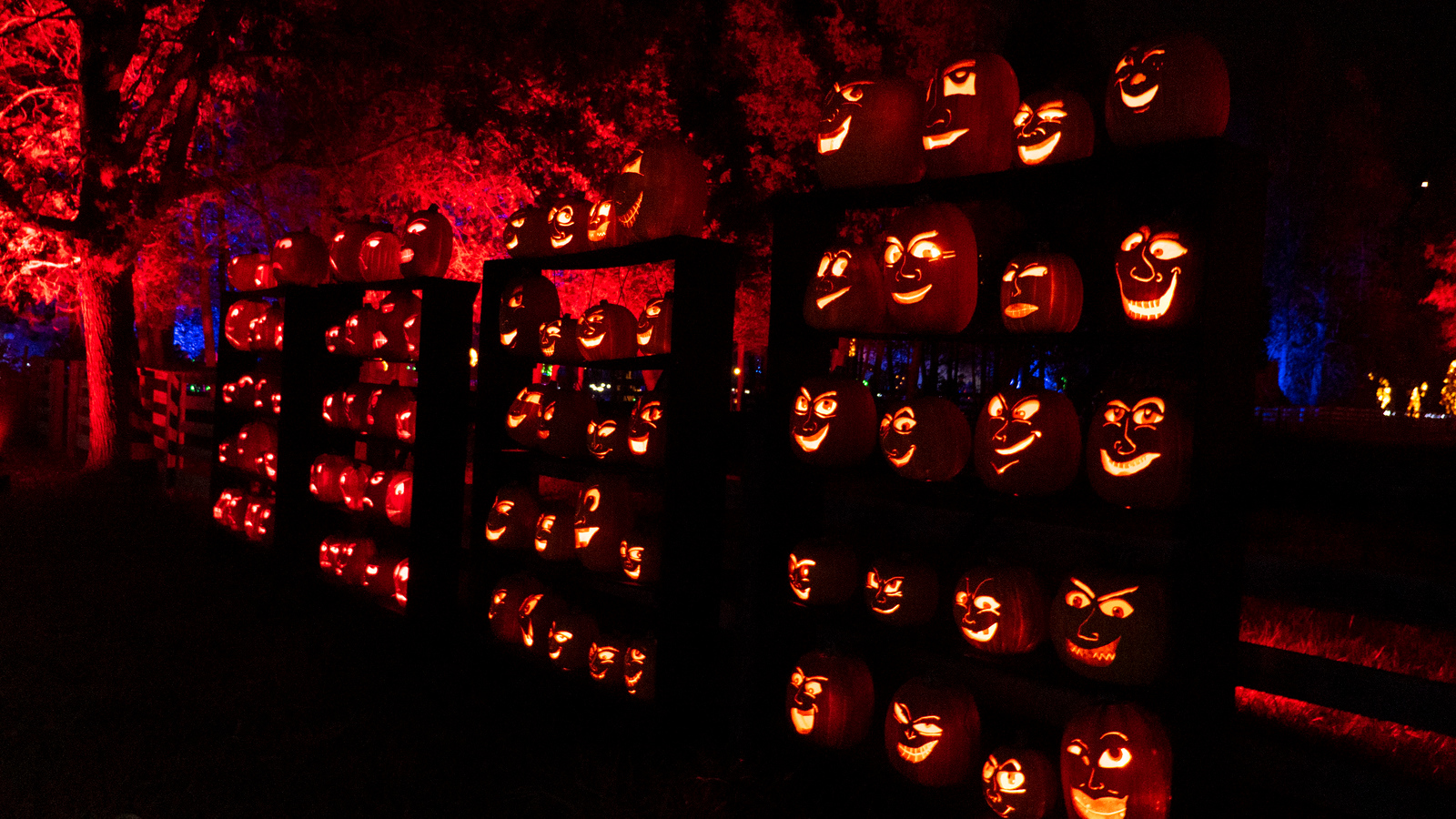 Are you here for the traditionally carved pumpkins? You’re in luck! Expression Progression showcases a vast variety of pumpkin faces in every mood imaginable. The sheer creativity is astounding. You could spend a lengthy amount of time at this exhibit alone, admiring each and every pumpkin head. 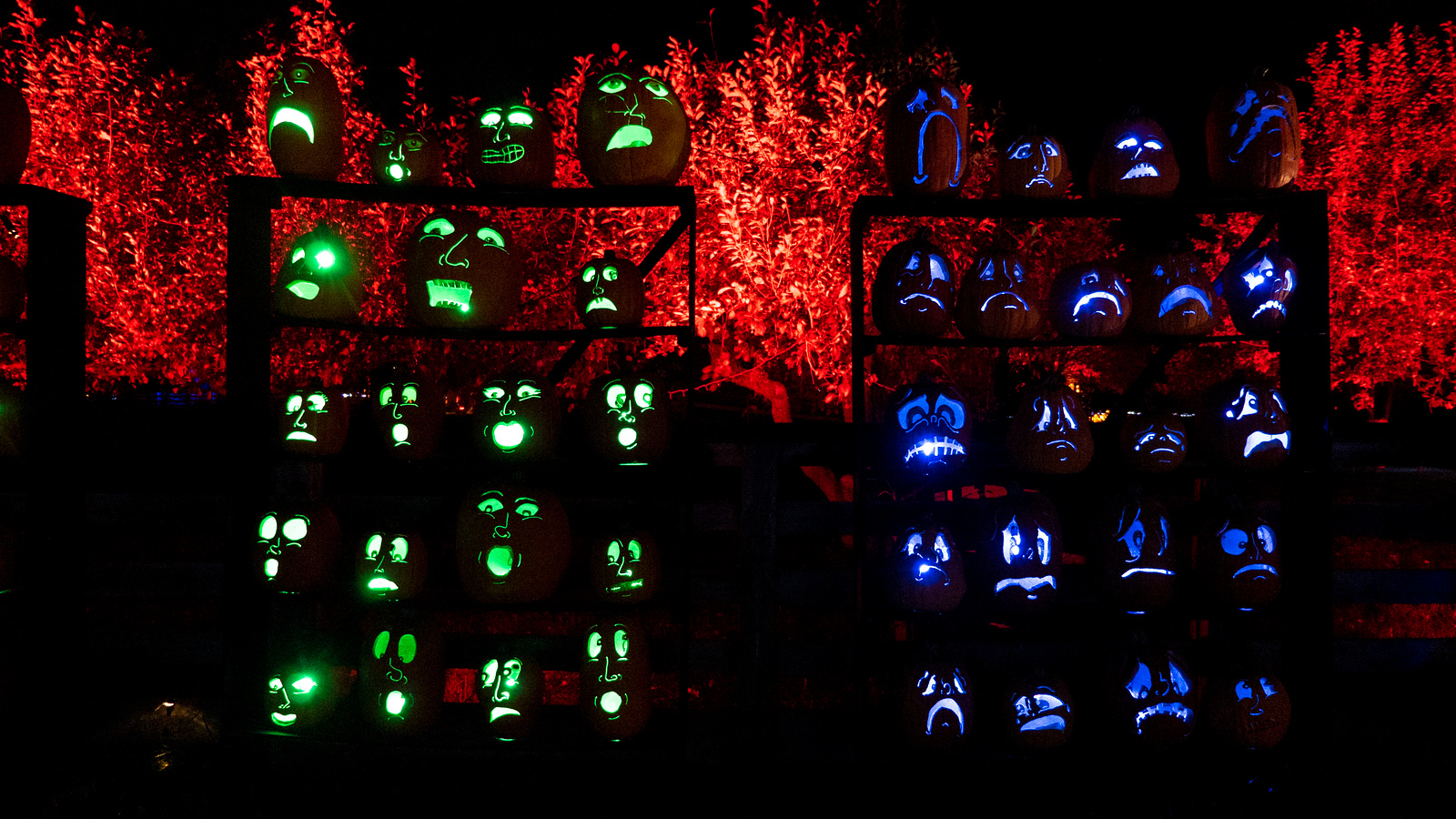 Creatures of the Current

Pumpkins under the sea? I never thought I’d see the day. Let’s take a dive beneath the surface of the ocean to discover underwater sea creatures. I’m in awe of the artists’ creativity in imagining and creating salt water marine life from pumpkins. There’s even a giant whale appearing from behind a building. 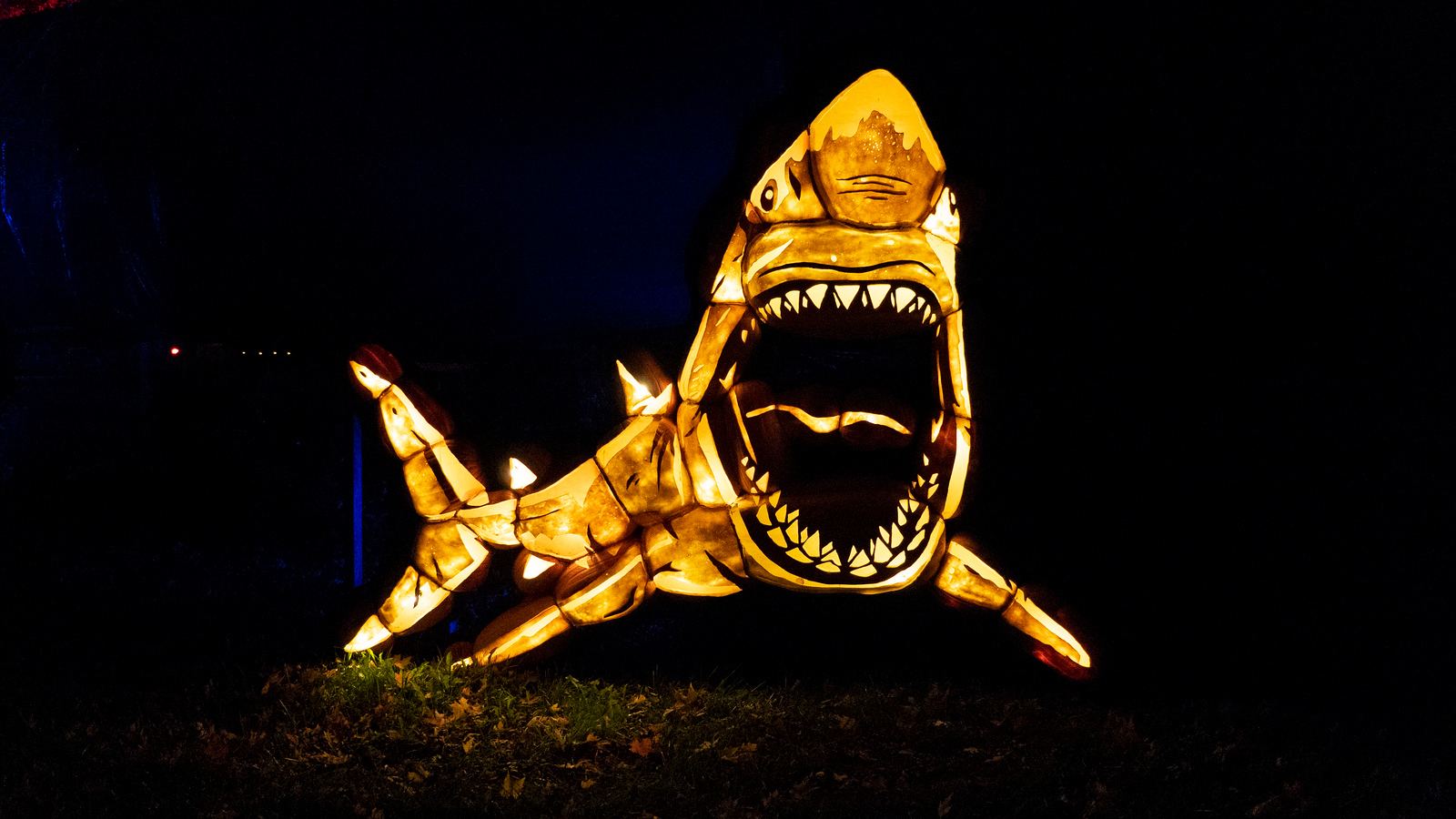 Coins of the World 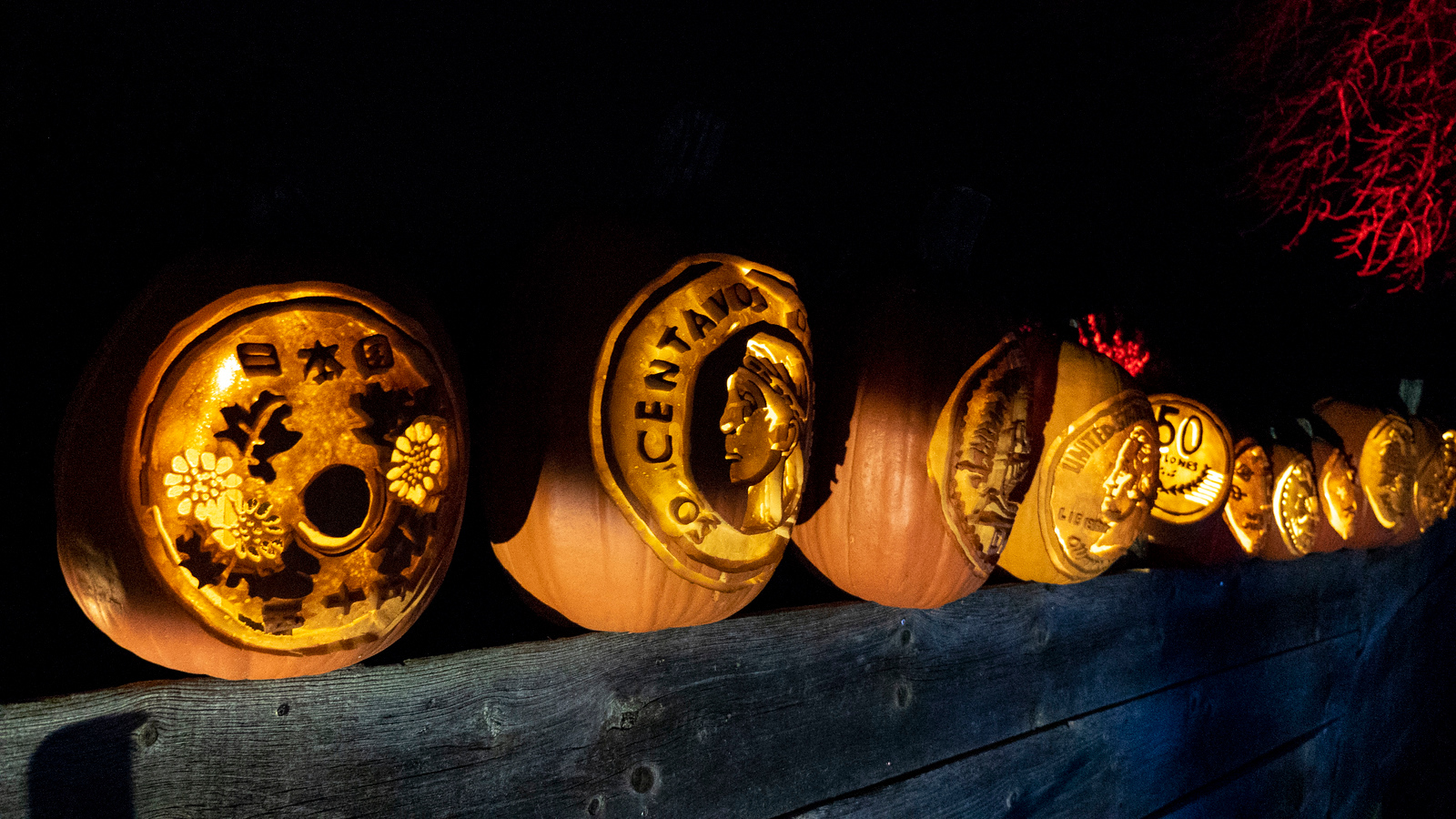 My fellow world travellers, how many coins do you recognize? This exhibit pays tribute to the worldwide guests that visit Upper Canada Village each year. 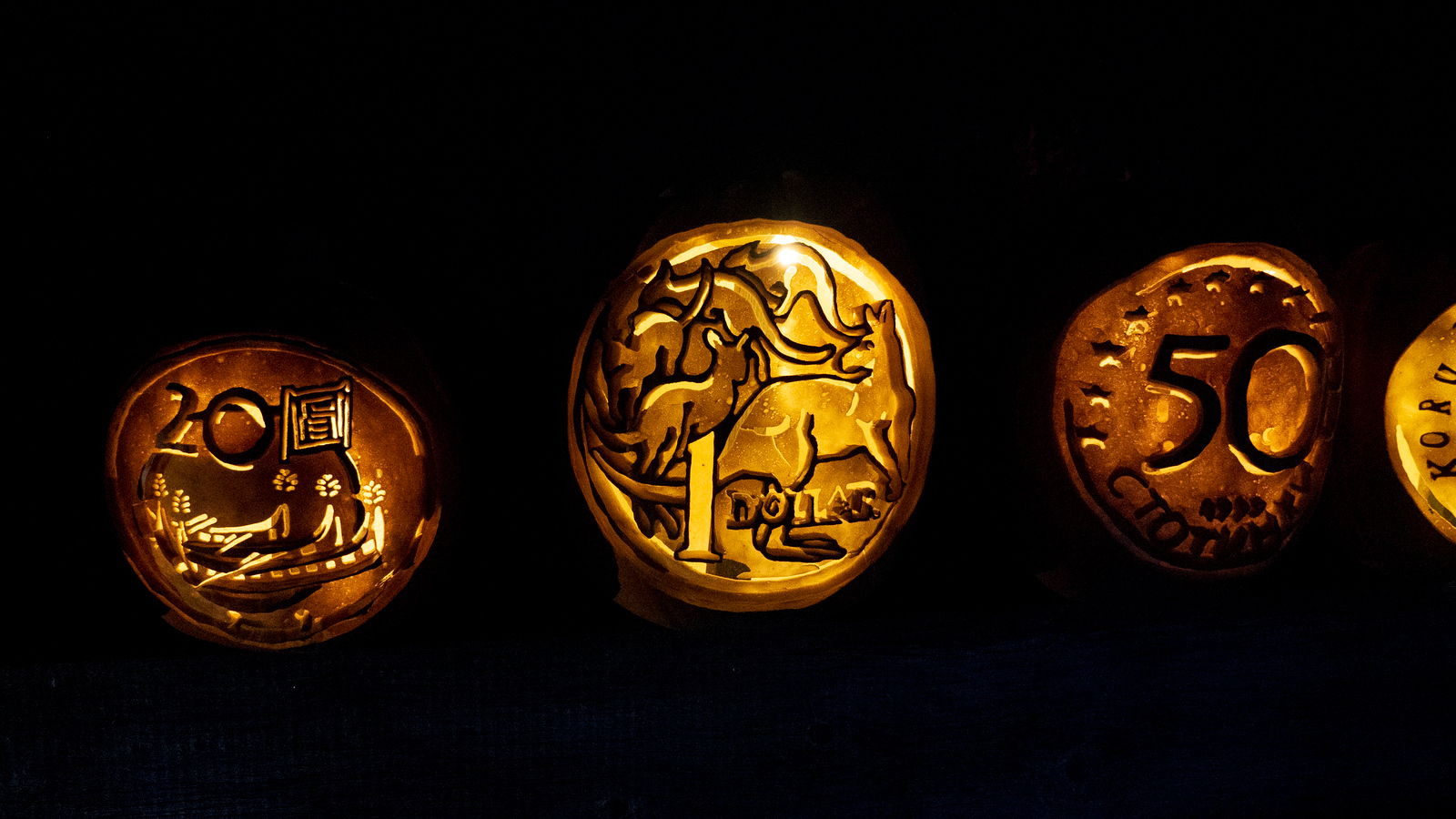 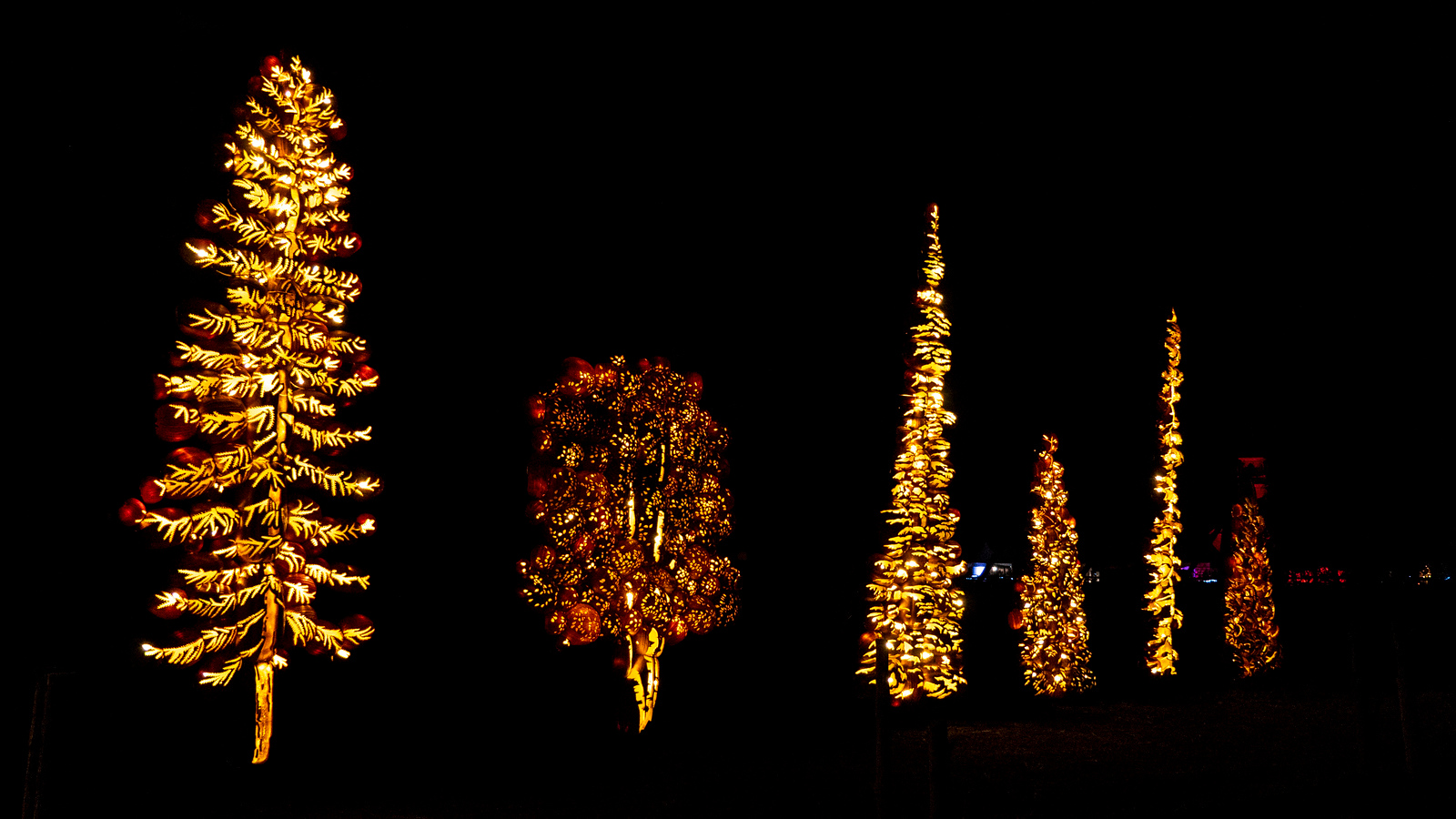 Timber Trail illustrates native deciduous and coniferous Canadian trees, all formed with carved pumpkins. I marveled at the intricate details carved into each tree leaf on the pumpkins.

Night at the Gallery

I never dreamed I’d ever see the Mona Lisa recreated out of pumpkins. The Night at the Gallery display has famous works of art made out of pumpkins. It’s like nothing I’ve ever seen before! 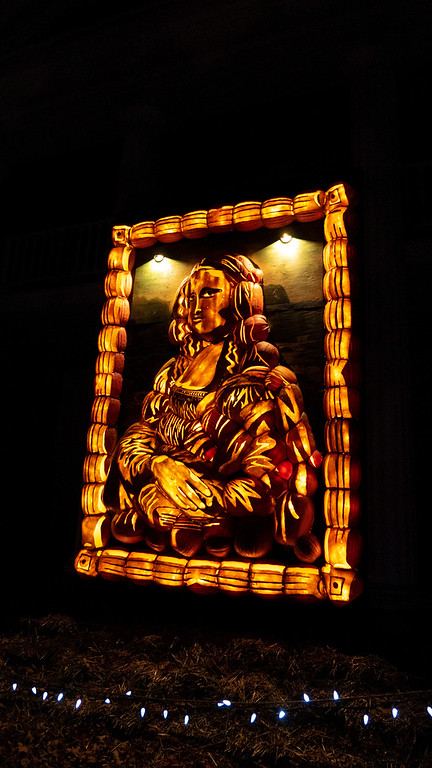 Day of the Dead

This pumpkin exhibit pays tribute to the Mexican holiday, Day of the Dead (Dia de los Muertos). Though the date of the holiday is close to Halloween, the two holidays vary greatly in purpose. You’ll see imagery and themes from Day of the Dead celebrations here at Pumpkinferno, including sugar skulls and skeletons. 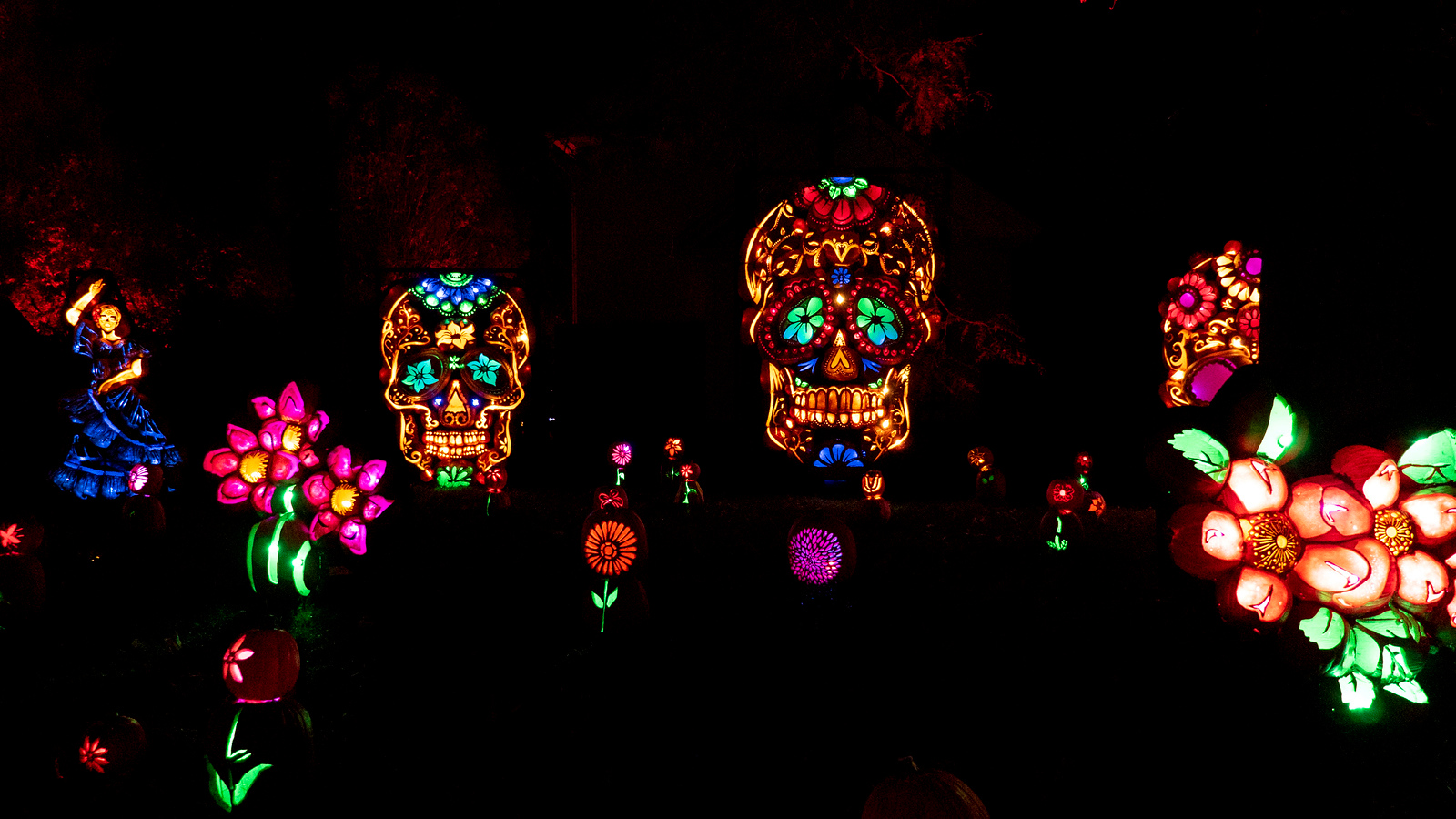 And that’s not all!

There are many more exhibits and glowing pumpkins at Pumpkinferno. You’ll just have to attend to see for yourself. There are also way more photos over at my Pumpkinferno travel photography album. You can purchase items like canvas prints, housewares, mugs, phone cases, and more…all made from any of my travel pictures! Check out my Smugmug photography site to view or buy items. 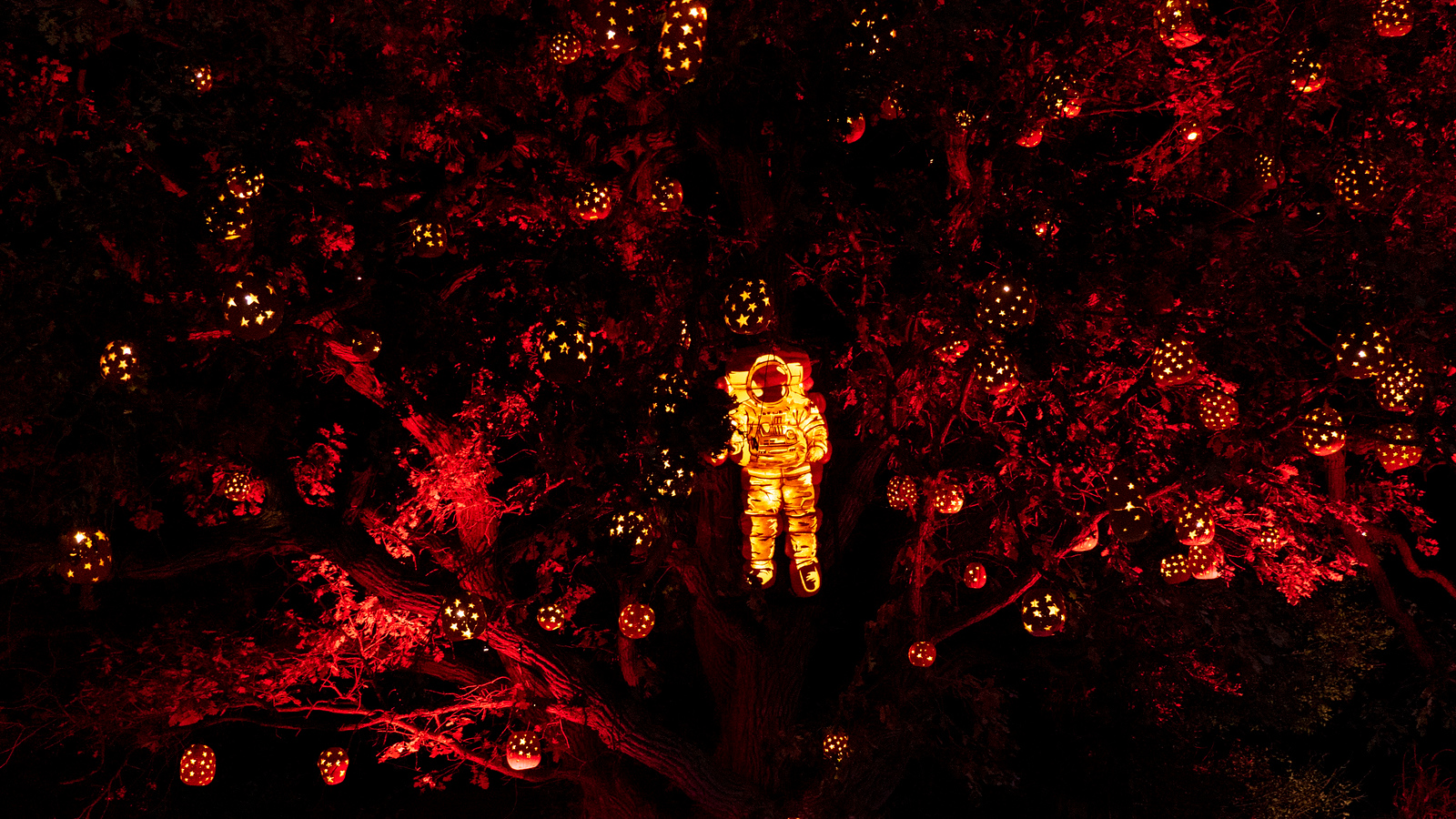 I was thoroughly impressed with the planning and organization behind Pumpkinferno. Unlike other similar events I’ve attended in the past, arriving and queuing was a breeze. Purchase your tickets in advance from the Pumpkinferno website as the event does sell out ahead of time. Upon arrival, there are many attendants showing you exactly where to park your car. Then, the line moves fairly quickly to enter as everyone has purchased their tickets ahead of time. I attended on a Friday evening that was sold out. Even still, the crowds were not bad at all. There was plenty of space to move about freely and admire the exhibits. I didn’t feel like anyone was being pushy or overcrowding my space. Everyone was admiring the displays and having a great time. There were lots of children and strollers, and the path was wide enough to accommodate everyone.

There are special nights at Pumpkinferno that are fully accessible. Those with physical disabilities can view the pumpkin lantern festival from the comfort of their own accessibility vans. However, all paths are easily navigated by wheelchair on a regular basis and those in wheelchairs can attend at any time. Pumpkinferno opens at the end of September and closes at the end of October. It’s on display from Thursday through Sunday. For all dates, pricing, ticket information and to purchase your tickets, please visit the Pumpkinferno Upper Canada Village website.

If you’re driving from a distance, you may want to spend the night in the region. In the town of Morrisburg, choose from the McIntosh Country Inn and the Russel Manor Bed and Breakfast for both comfortable and affordable stays. In the nearby city of Brockville, you’ll have the choice of popular brands like the Travelodge, Super 8, Holiday Inn Express, and the Comfort Inn. As always, I recommend checking out Tripadvisor for reviews of properties before you decide to book.

For a truly unforgettable evening, be sure to check out Pumpkinferno, the ultimate pumpkin lantern festival. Let me know if you decide to visit as I’d love to hear what you think! Share your stores in the comments section below. 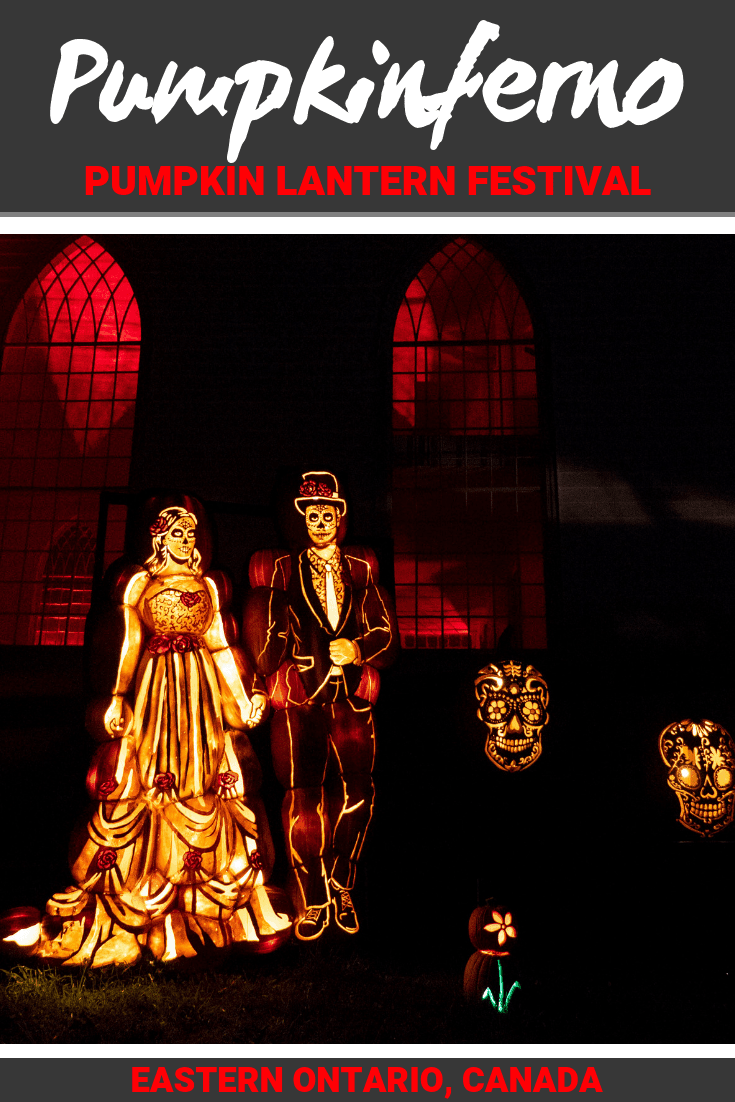 Have you ever visited a Halloween festival before? Tell me all about it!