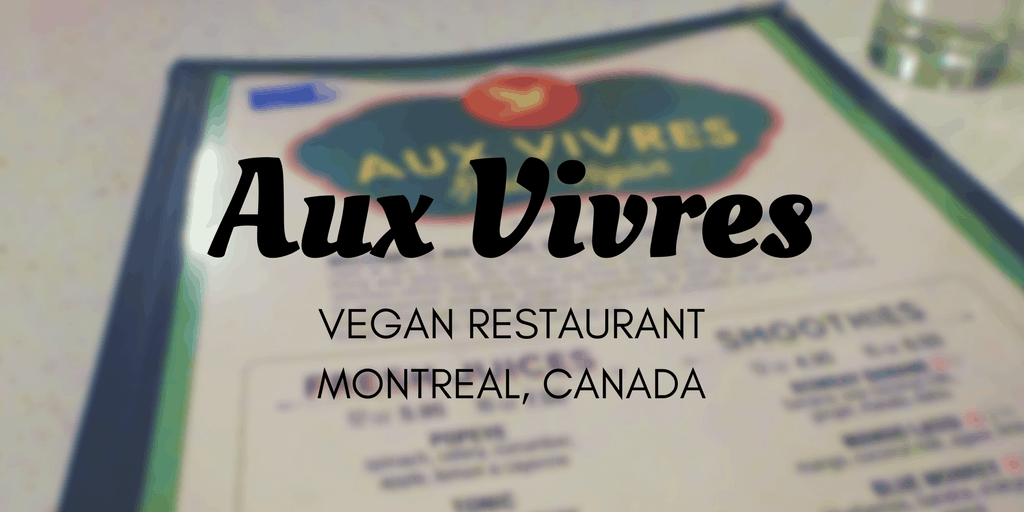 Aux Vivres was our favourite vegan restaurant in Montreal.

After we left the Rio Tinto Alcan Planetarium in Montreal, we were ready for dinner. It was an easy jaunt on the Metro the subway stop closest to the vegan restaurant, Aux Vivres.

Spoiler alert: we loved Aux Vivres so much that we headed back there three times during our few days in Montreal!

For our first experience at Aux Vivres, we departed the Metro to find that it was absolutely pouring rain outside. Although we had to run a few blocks in the rain, it was worth it. Justin and I were both a soggy mess by the time we slumped into our booth at Aux Vivres. It didn’t really matter too much because it was time for delicious plant-based eats!

SO MANY LIFE CHOICES

On the menu, we found a variety of bowls, wraps, sandwiches, salads, and several appetizers. Everything on the menu was vegan, which made it so difficult to choose.

To start, Justin and I split an order of Chapati bread that came with Aux Vivres’ own homemade vegan butter. It melted all over the flatbread and was full of flavour. Yum! 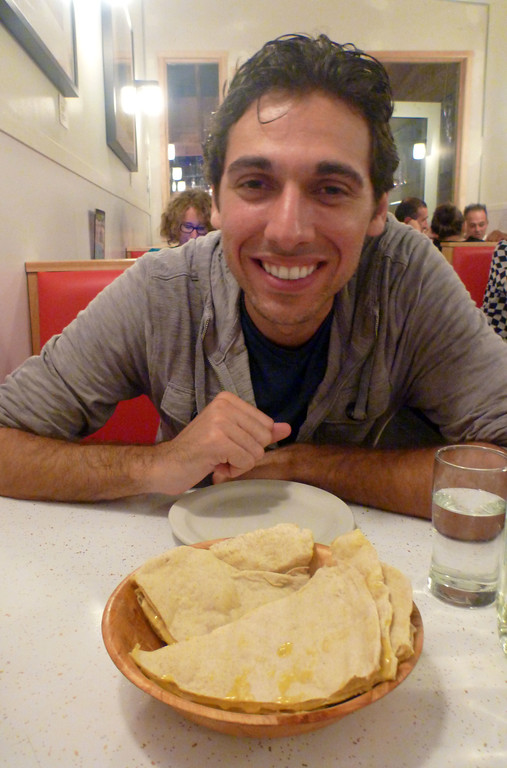 For the main course, I ordered the Thai bowl that came with grilled tofu, Thai peanut sauce, steamed bok choy, pickled carrot & daikon, peanuts, and cilantro over organic brown rice. All of the flavors perfectly complimented one another.

Justin ordered the Kosmos plate, which had a variety of Green-influenced food: souvlaki-style seitan, tzatziki, salad, potato wedges, and rice. Justin said that it has been such a long time since he had eaten Greek food like that and it was such a treat. I tried some of the seitan and had to stop myself from stealing all of it from his plate. The vegan tzatziki was delicious, too.

And then there was the dessert menu. Although we were far too full to eat dessert, but we weren’t about to let that stop us from bringing some back to the hotel with us. We ordered a chocolate brownie and a chocolate banana pie slice. Unfortunately, there aren’t any pics, so you’ll have to trust us that they were divine.

The following afternoon, we returned to Aux Vivres after walking all over Montreal. Justin and I had worked up quite the appetite, and we were happy to satisfy it at our new favourite vegan establishment.

This time, we sampled some new choices on the menu. Well, one of us did. Justin enjoyed that Greek plate so much that he ordered it all over again. I ordered the Indian influenced Chana wrap for something different. The two of us split an order of cornbread, and completed the order with a couple of smoothies (in tropical and chocolate). 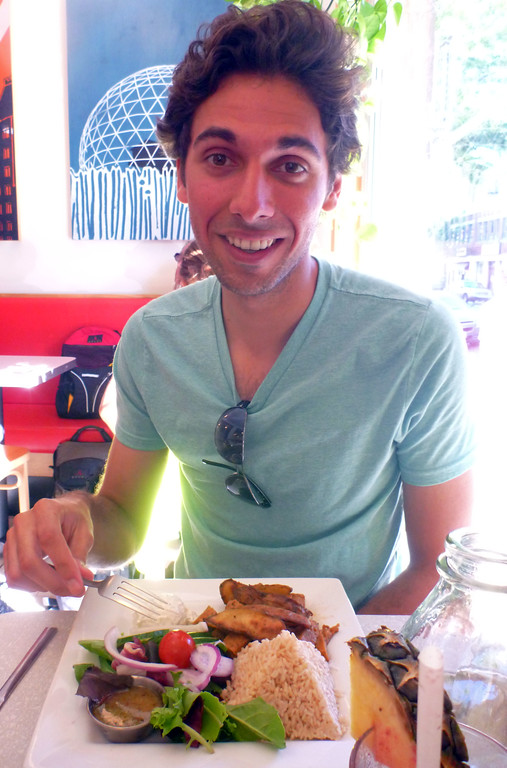 It’s time for take three! The brunch menu at Aux Vivres is completely separate from the regular menu, and it’s only available on weekends.

Back in these days, it was hard to find a restaurant that had vegan brunch, let alone vegan pancakes. It was something I enjoyed making at home, but was never fortunate to have someone prepare for me…until now.

Justin and I ordered vegan blueberry pancakes and gobbled them up quickly. They were so fluffy, tasty, and filling. The presentation was beautiful with freshly cut fruit on top, and they were served with maple syrup and cashew cream.

As you can imagine, we adored Aux Vivres, especially if you judge by the fact that we went there on three separate occasions. When you combine Aux Vivres with other vegan-friendly restaurant gems like La Panthere Verte, you’ll easily see that Montreal is a haven for vegans with so many options for yummy vegetarian eats.

Check out all of our photos from this trip to Montreal. You can purchase prints, order canvas wall hangings, and even housewares and phone cases made out of our pictures. Check out our travel photography site for more details.

Looking for a place to stay in Montreal? We loved our luxurious three nights at the Hotel Montreal Bonaventure. The rooms are spacious and comfortable, and there’s the most beautiful rooftop swimming pool. Justin and I thoroughly enjoyed using the outdoor swimming pool in the evening, as you can even swim right back inside the hotel if you’d like. 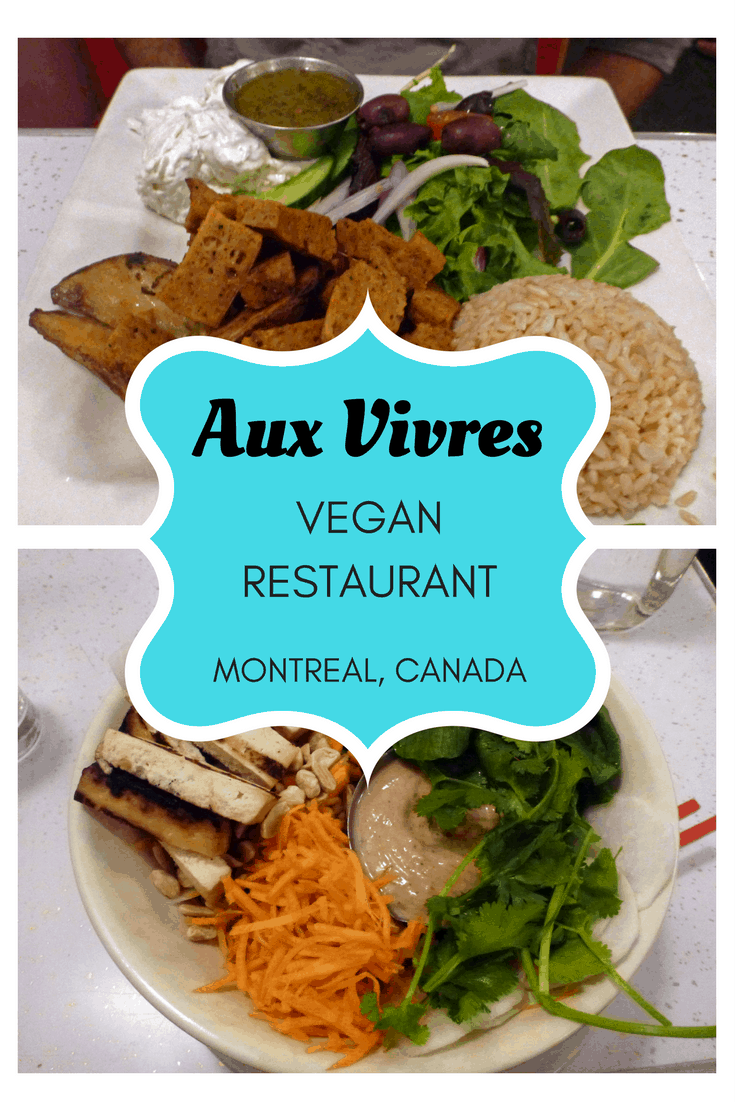 Have you ever dined at Aux Vivres? What’s your favourite vegan or vegetarian restaurant?

0shares
Montreal Planetarium: Experiencing Outer Space
← Previous
One Day in Montreal: A Self Guided Walking Tour of the Best Things to Do in Montreal
Next →
Click here to cancel reply.

What a coincedence, I was chatting with one of my besties last night and she wanted to move back to Montreal and one of her list of things to do is to eat at Aux Vivres, and I was going to look it up, but too lazy to look it up and bam, here is it - your review on this eatery! What a small world, right?! And thanks for the link to the whole menu - I love looking at menus! Speaking of the Thai dish you've ordered, it is making me miss Thailand and the Vegetrian Festival vegan street foods - and I love the underwater shots! Have a lovely time in Montreal!