One Day in Montreal: A Self Guided Walking Tour of the Best Things to Do in Montreal Skip to Content

One Day in Montreal: A Self Guided Walking Tour of the Best Things to Do in Montreal 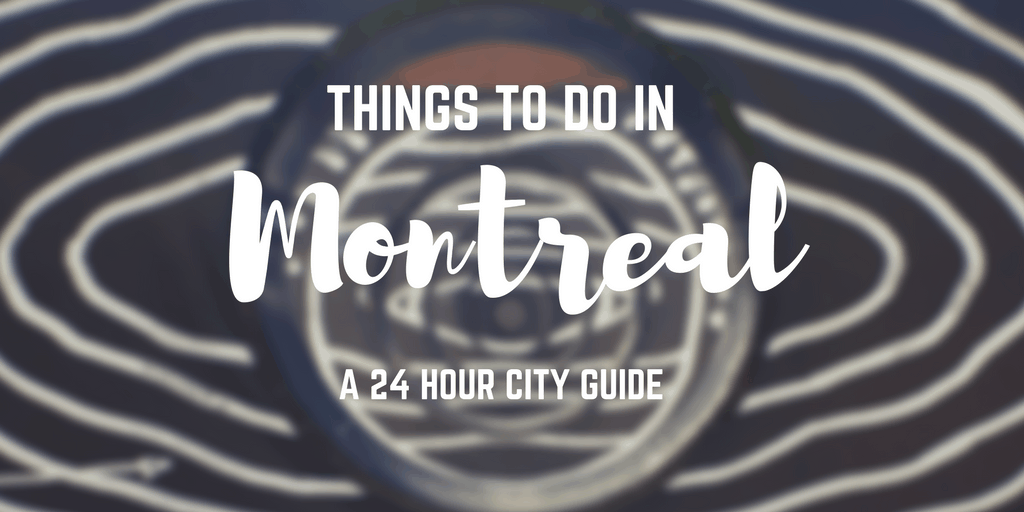 Here’s how we walked all over Montreal in a day!

Montreal is only about a five hour drive from Toronto, so we’re grateful that we can be there in less than half a day by car. There are so many things to do in Montreal. It’s the kind of city that you can visit over and over again, seeing new and different attractions and places each time.

If you’re a first timer to Montreal, I highly suggest walking around everywhere like we did. This was one of our first trips together, and Justin and I fell in love with the city. With areas like Old Montreal that feel right out of Europe, it truly feels like an escape within our own country.

Here’s a wonderful way to spend 24 hours in Montreal. Walk all over the city and explore by foot. 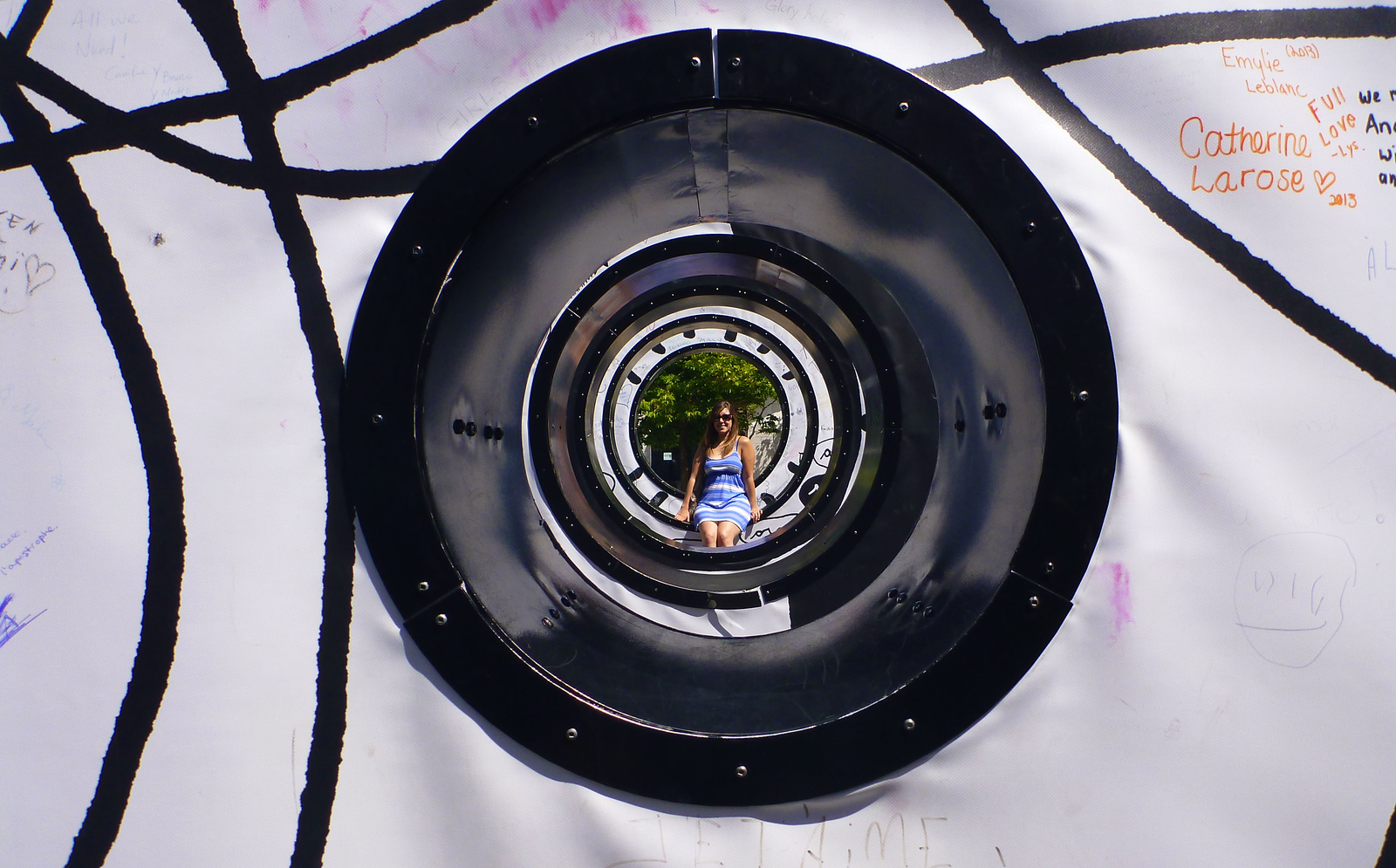 OUTDOOR ART IN THE GAY VILLAGE

Our first stop was Montreal’s Gay Village. Justin and I took the Metro to the station, Berri-UQAM and started our walk there.

The two of us walked down Rue St. Catharine to the Gay Village where the street was closed down to traffic for several city blocks. There were outdoor art installations there all summer long, and people could walk down the street freely to shops, restaurants, and outdoor patios.

One of the main art installations there was Les Boules Roses – pink balls strung across the entire length of the road. It was so cool to see all of the pink balls overhead extending for as far as we could see. 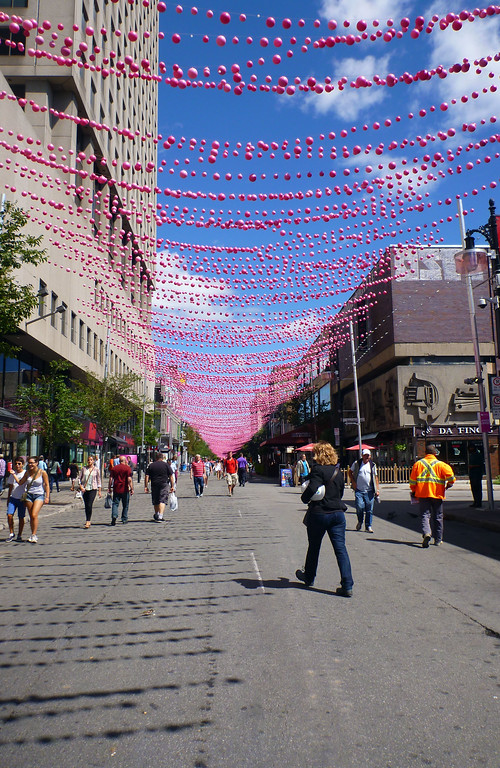 We stumbled upon another art installation at the side of the road. There were several black and white walls lined up beside one another with the word, “IMPASSE” on one side. Visitors wrote their own messages all over it. There were circular holes varying in size through each section of the walls, so we could see straight through from one side to the other. 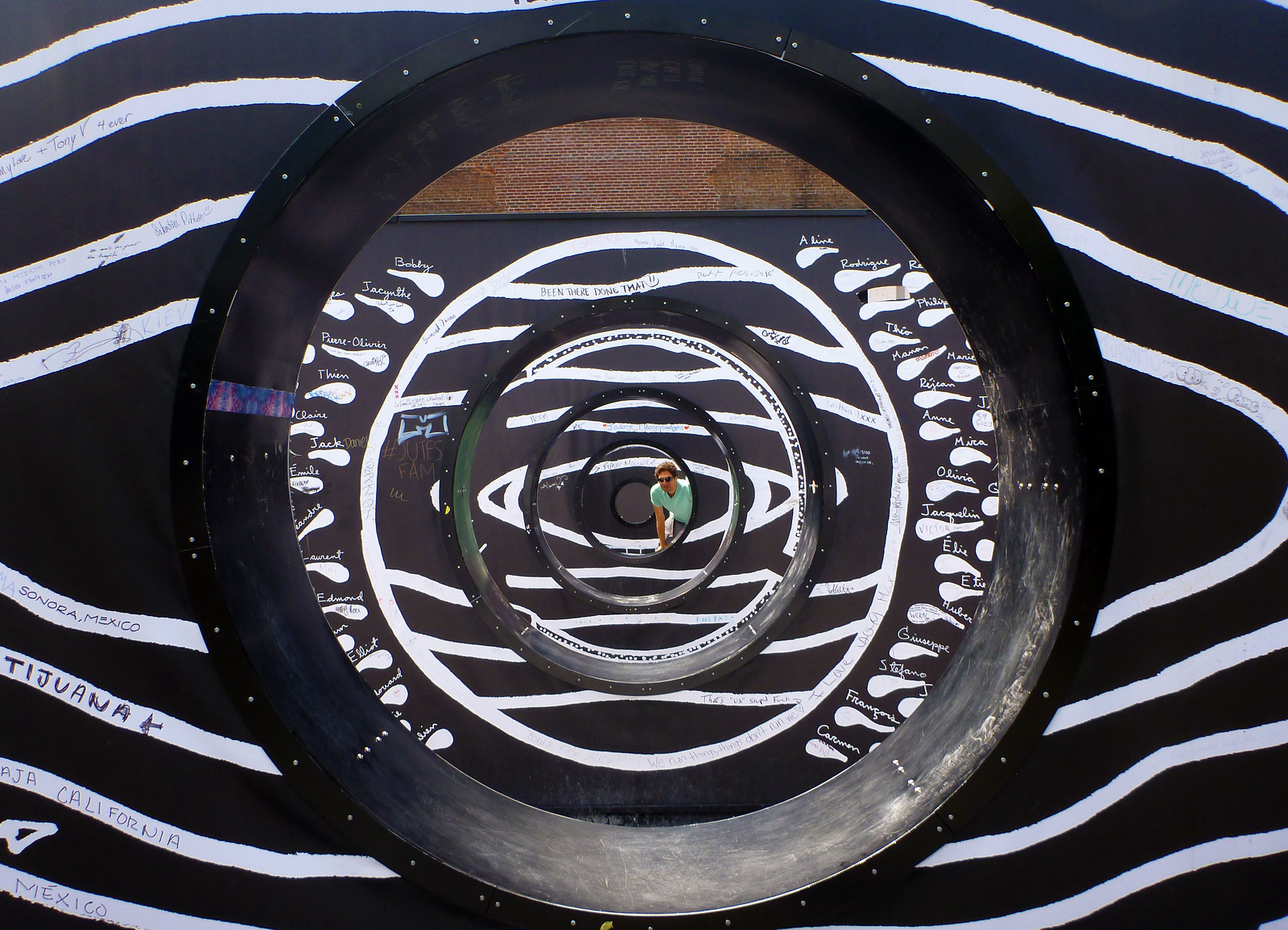 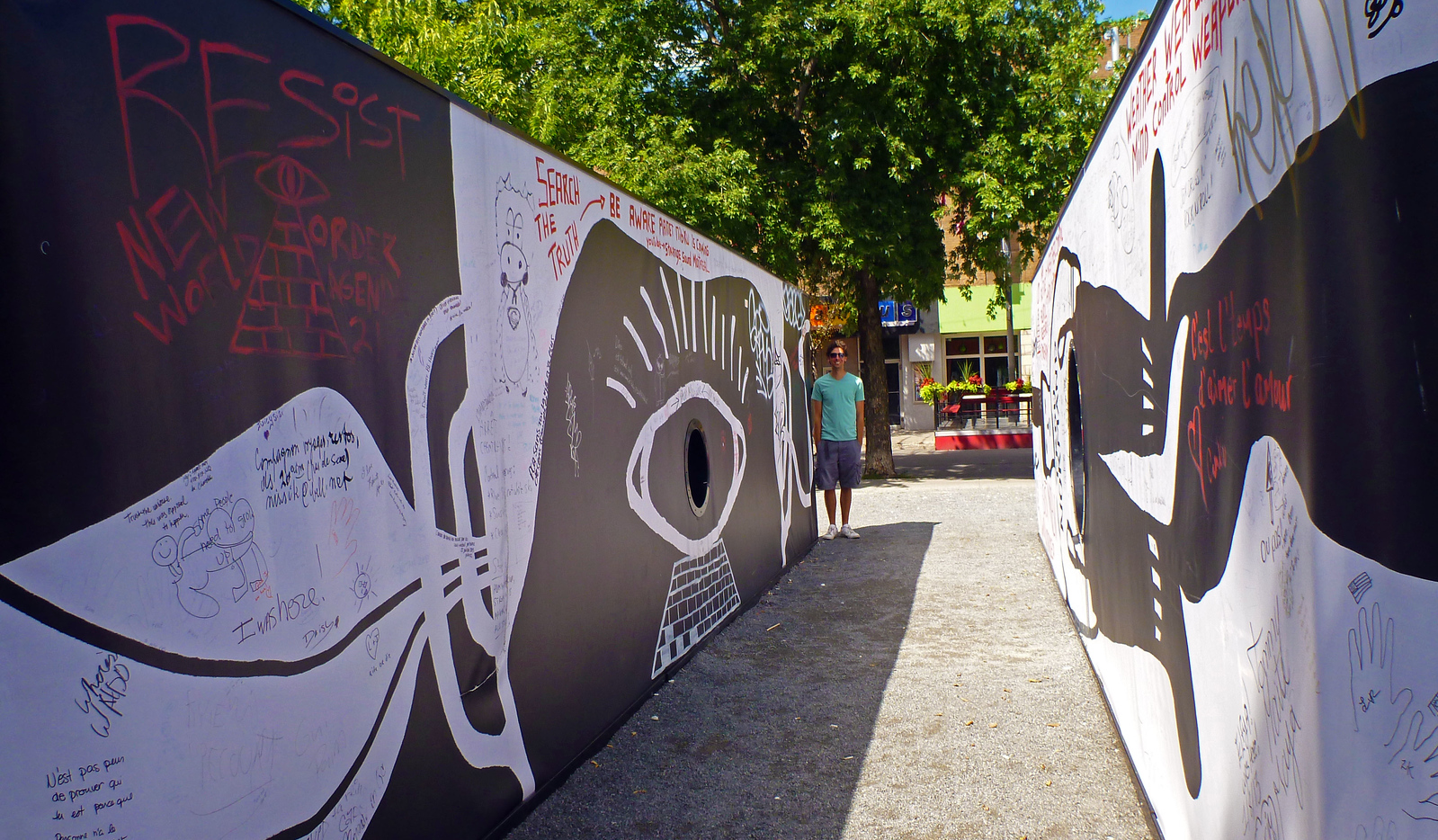 Even the Metro stop nearby was very colourful! We loved seeing bright bursts of colour all around and artwork in random places. Continue to walk from Rue St. Catharine to Rue St. Denis, and down towards Old Montreal. 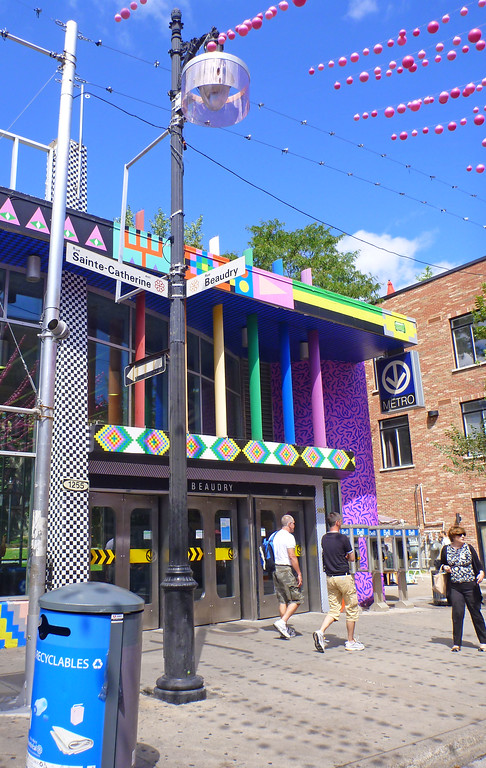 Next up on our list of things to do in Montreal is the iconic neighbourhood of Old Montreal (Vieux Montreal).

It looked like an old town straight out of Europe, right in the middle of a modern major city. There were old buildings and shops, cobblestone roads, people selling art on the streets, and rustic cafes. We walked primarily down Rue Saint Paul as well as the neighboring side streets.

Before long, I was craving a cup of coffee. We were surrounded by restaurants and cafes, so it was difficult to choose which one to visit. I did a quick search on my phone for the best coffee in Old Montreal, and was directed to Café Luna d’Oro on Rue Saint Francois-Xavier.

Justin and I both ordered a couple of delicious Café Americanos that were strong and flavorful. The coffee shop was quaint with only a few seats indoors, but most people were taking their coffee to go.  Although we didn’t order any food (lack of vegan options), all of the menu items were named after planets and galaxies found in outer space. So cool! 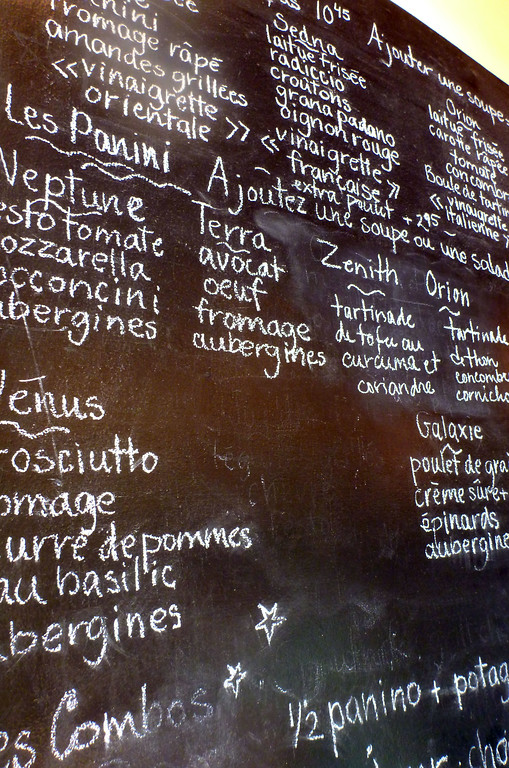 We continued our walk all around Old Montreal through Artist Alley. Local artists sold their sketches and paintings there, mostly based on Montreal landscapes and life in Canada. There was an adjacent small alley that led to a small outdoor art market with vendors selling mostly jewelry. It was mostly shaded by huge trees and old buildings, and provided some cool shade on a hot summer day.

From Old Montreal, we wandered to the nearby Old Port neighbourhood. Upon entering the area, Justin and I noticed an area with all kinds of barrels, pirate flags, and ropes that looked straight out of the 1800s. These looked like props from a movie set or something. Later, we discovered that a group performs reenactments in this historic setting of Old Montreal.

Since no one seemed to be around all of these props, we took it upon ourselves to take some cheesy photos among everything. 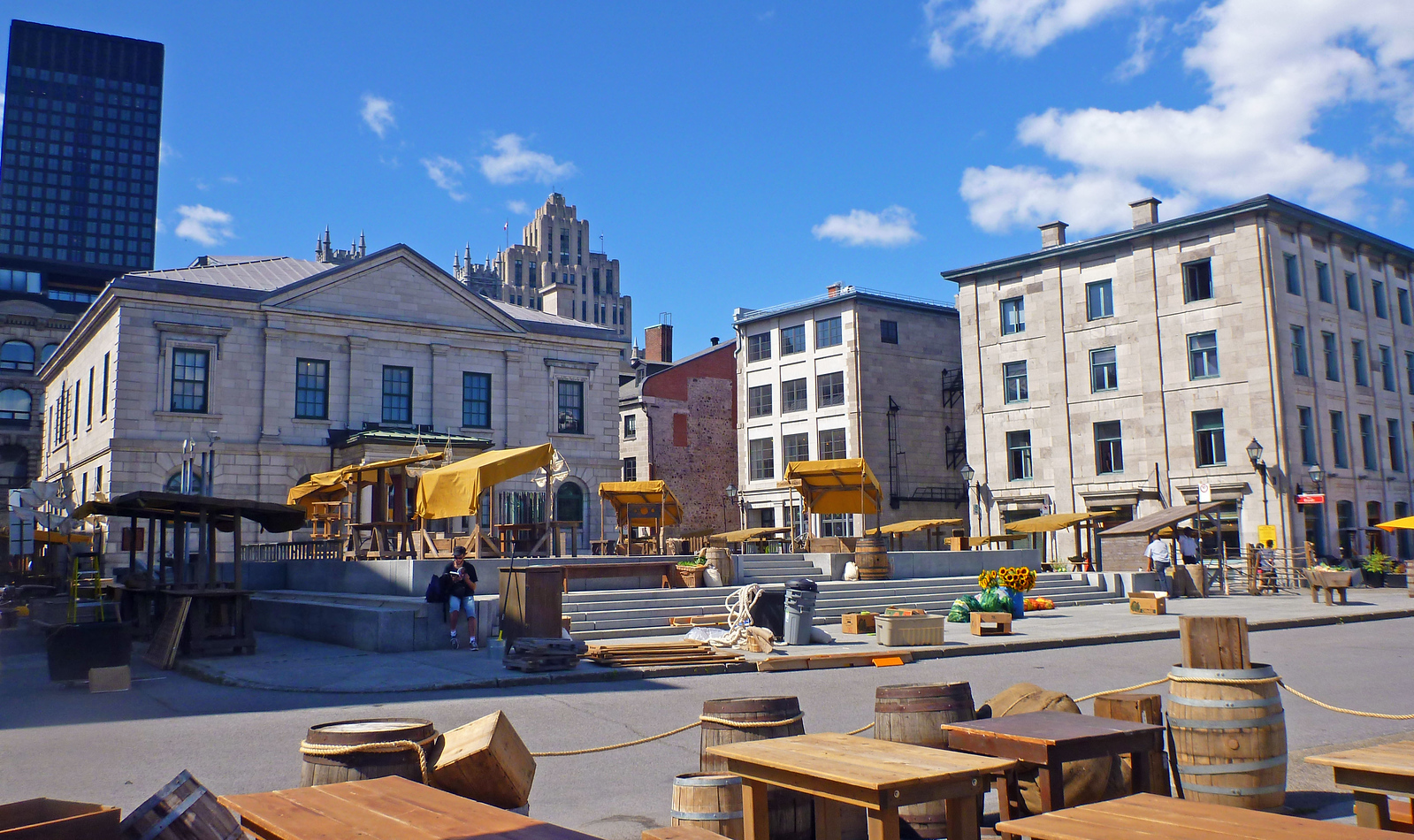 Justin and I continued to walk along the water. There was a little bridge that led to a small pond with ducks. We sat on a bench here and rested our legs, watching tourists and locals pilot miniature sailboats around the pond. 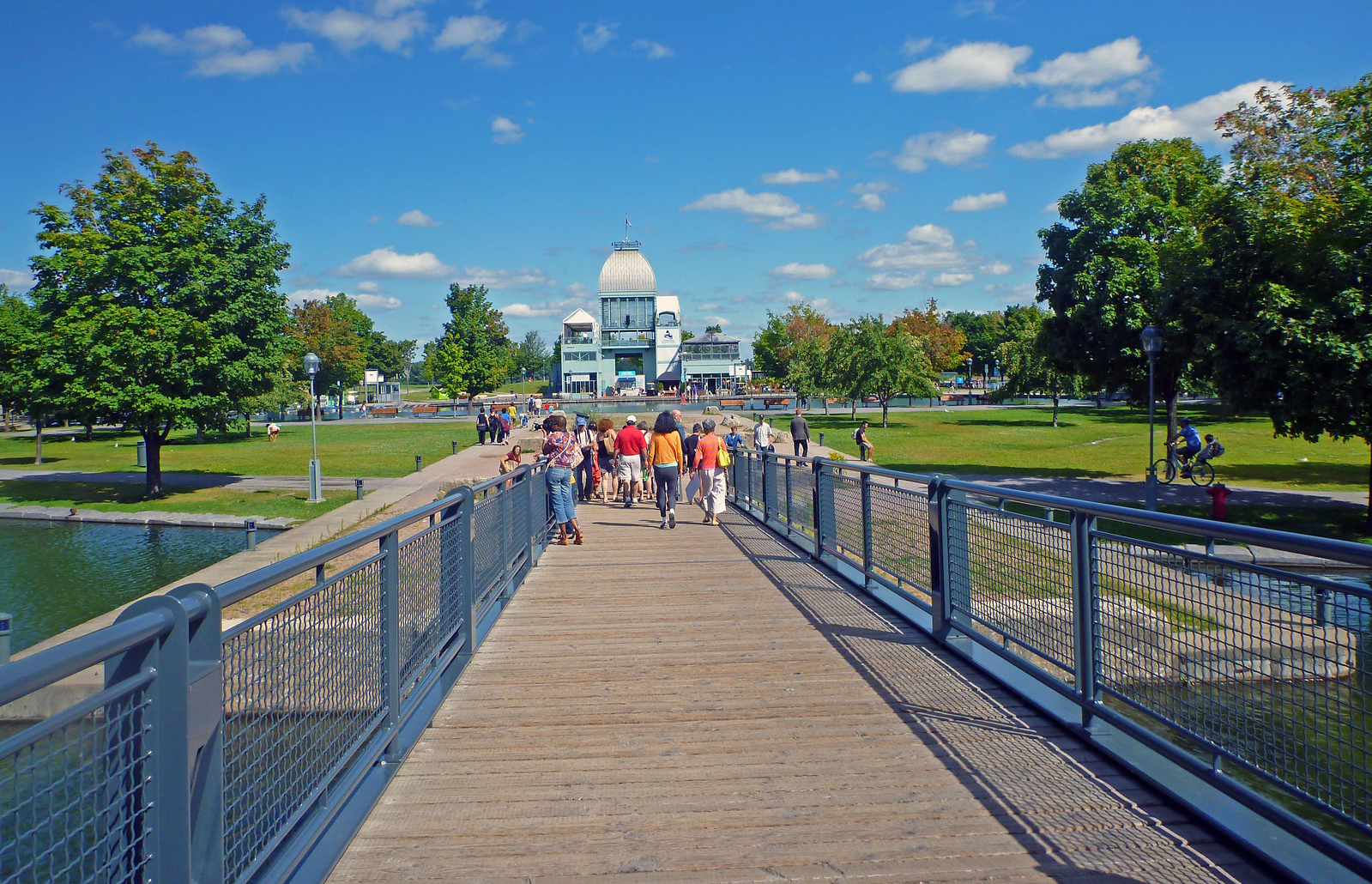 From Old Port, we wandered up Boul de Ste-Laurent until we stumbled upon the gates of Chinatown. Witness these iconic red gates with lion statues posed in front of them. We really didn’t stop anywhere in Chinatown, but it was cool to see nevertheless. 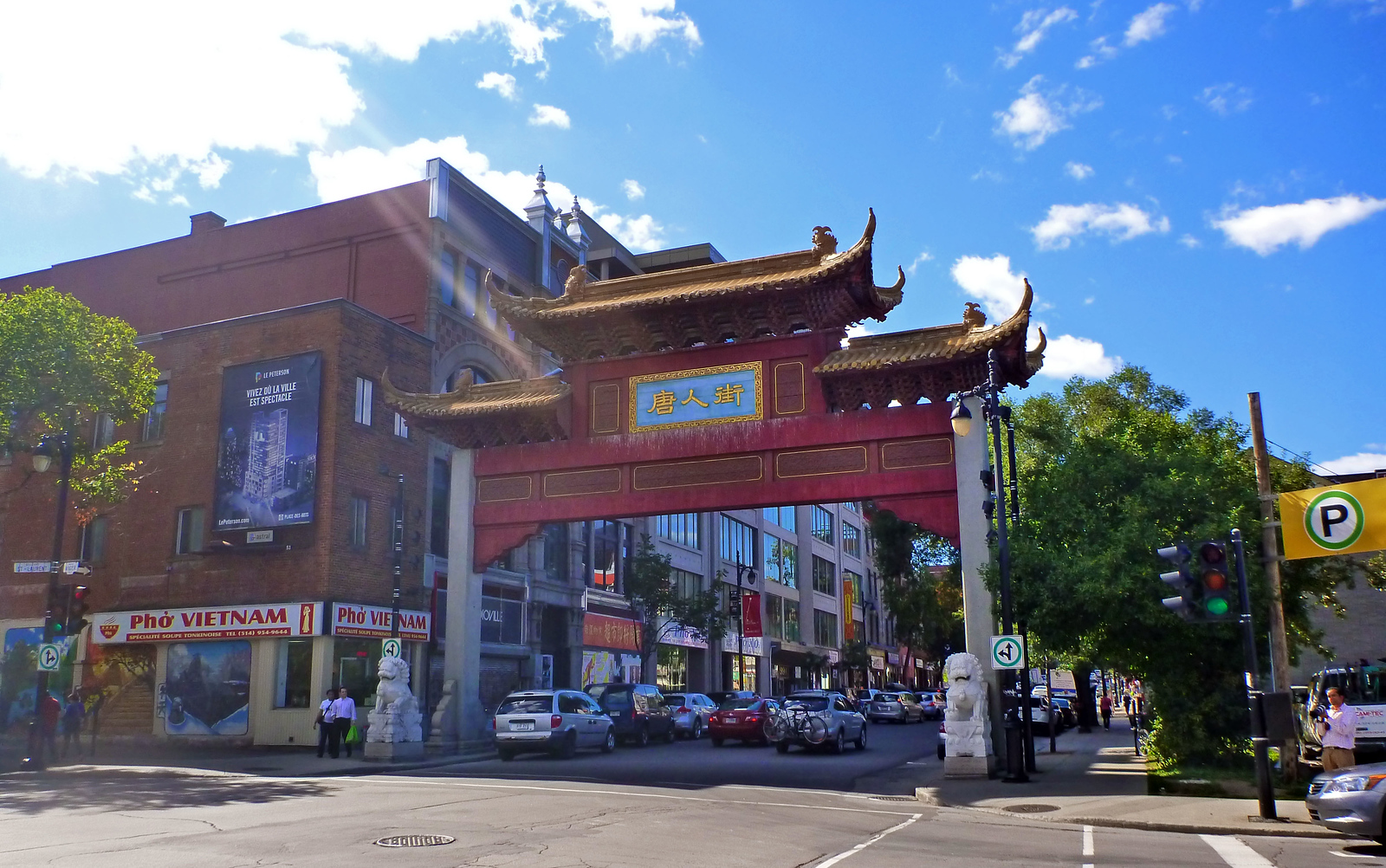 Another interesting discovery: many streets in Montreal are closed off to vehicle traffic in the summer so pedestrians can wander about. Justin and I walked into an area like this where vendors set up shop and there were massive sidewalk sales.

I’m not sure how often these street fairs appear in Montreal, but there’s a good chance you might discover one while visiting.

If you’re a fan of unique architecture and colourful places, add this one to your list of things to do in Montreal. The Congress Building is likely an image you’ve seen on Pinterest (that’s how I discovered it, actually!).

There’s a rainbow of glass panels covering this whole building that look cool on the outside, but even better indoors. The light filters through the glass for a rainbow of light radiating on the inside, too.

Be sure to wander inside the Congress Building to take a look!

OTHER PLACES TO VISIT

Some other places we’ve visited on this trip and other times in Montreal include: Habitat 67 (super cool apartments and one of the most unique architectural residences I’ve seen), the Rio Tinto Alcan Planetarium for a space show or two, or the Montreal Lantern Festival at the Botanical Garden (in the fall). Justin and I enjoyed three luxurious evenings at the Hotel Montreal Bonaventure. The rooms are spacious and comfortable, and we took full advantage of the rooftop swimming pool, especially during the evenings after long days of exploring the city.

If you’re looking for delicious vegan eats, be sure to check out Aux Vivres and La Panthere Verte, as well as Sophie Sucree for dessert.

Looking for more photos of Montreal? Check out our entire travel photo album from this adventure to Montreal. From our photo album, you can purchase prints, housewares, phone cases and more – all made from our photography. 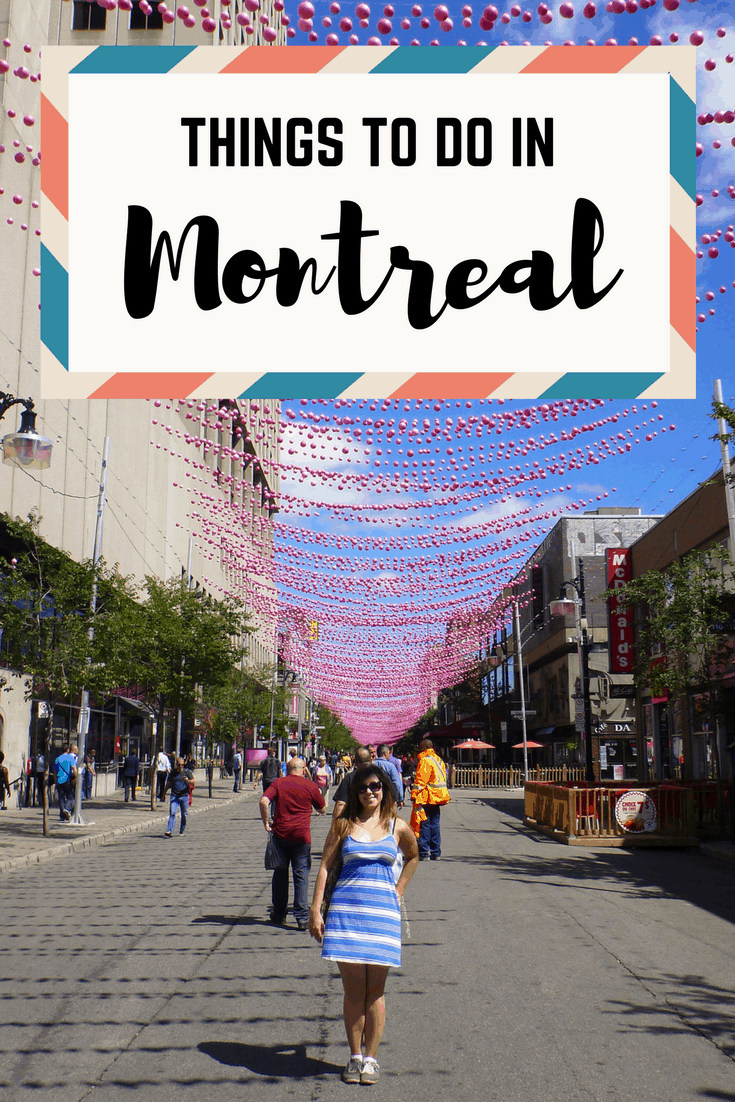 What do you love about Montreal?

Montreal is a fabulous city. Great to see so many lovely photos.

I've never been to Montreal but I would love to! Thanks for linking up to the #SundayTraveler!

You should go when you get the chance, it is a lovely city!

Thanks for sharing, guys, you just reminded us how much we love Montreal. This is by far our favorite city in the world. If it wasn't for the winter, we would move permanently to Montreal.

I've thought about moving to Montreal! It would be difficult to work there I think without speaking French. You can definitely get by as a tourist, but I think to work there you probably have to be bilingual. It is a great city though and I love it there!

Montreal is such a fun city to wander around, isn't it? The walk downhill to this part of town was really nice when my wife and I visited a few years ago. That's great that you guys were able to track down some local handicrafts, we'll have to check out that place the next time we're back there.

I loved walking down into Old Montreal for the first time, it was quite magical going from a regular city into a charming, seemingly European looking town :)

Never been to Montreal but some of my best friends are from there. I look forward to visiting one day.

You should definitely go, you'll love it!