In a place known for its meat and cheese, who knew there were so many delicious vegan options?

Wisconsin isn’t exactly known for vegan food. Gourmet cheese and brats are beloved by many living in Milwaukee. However, vegan and vegetarian options are widespread in the city. It’s very easy to comfortably dine as a vegan in Milwaukee. There are a few entirely vegetarian restaurants, and a plethora that offer several vegan items on the menu. Even in the land of dairy, I didn’t experience any odd looks when asking for pizza without cheese or soy milk in my oatmeal. During my four days in Milwaukee, I barely scraped the surface of vegan offerings. I’ll outline what I ate while I was there, plus give a few more suggestions for places that I’d like to check out on my next visit. Here’s my vegan guide to Milwaukee, Wisconsin.

Did someone say coffee? This historic building, built in 1888, was the Milwaukee River Flushing Station. There’s even an entire space in the coffee shop dedicated to the building’s history. Colectivo Coffee serves coffee and espresso beverages, and even sells their own roasted beans. It’s also a great place to dine for breakfast and brunch. I was able to find several vegan options here, including , peanut butter on a bagel, and fresh fruit. For lunch, they have a vegetable hummus wrap that’s vegan. We dined on the outdoor patio, which was the perfect place in town on a sunny morning.

UPDATE: A kind reader has informed me that the oatmeal is not vegan (even when substituting soy milk) ; unfortunately, the oatmeal is baked with eggs and milk. 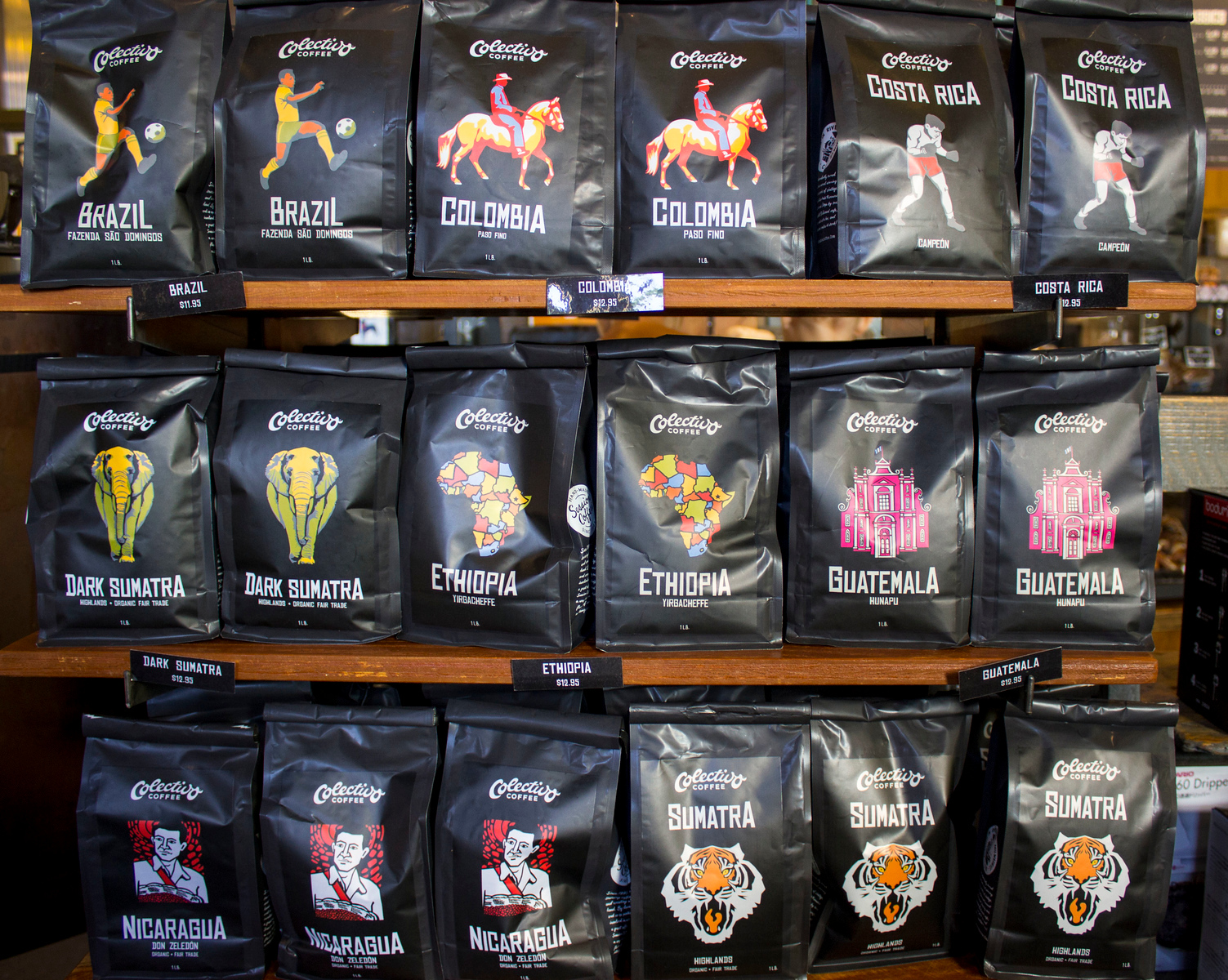 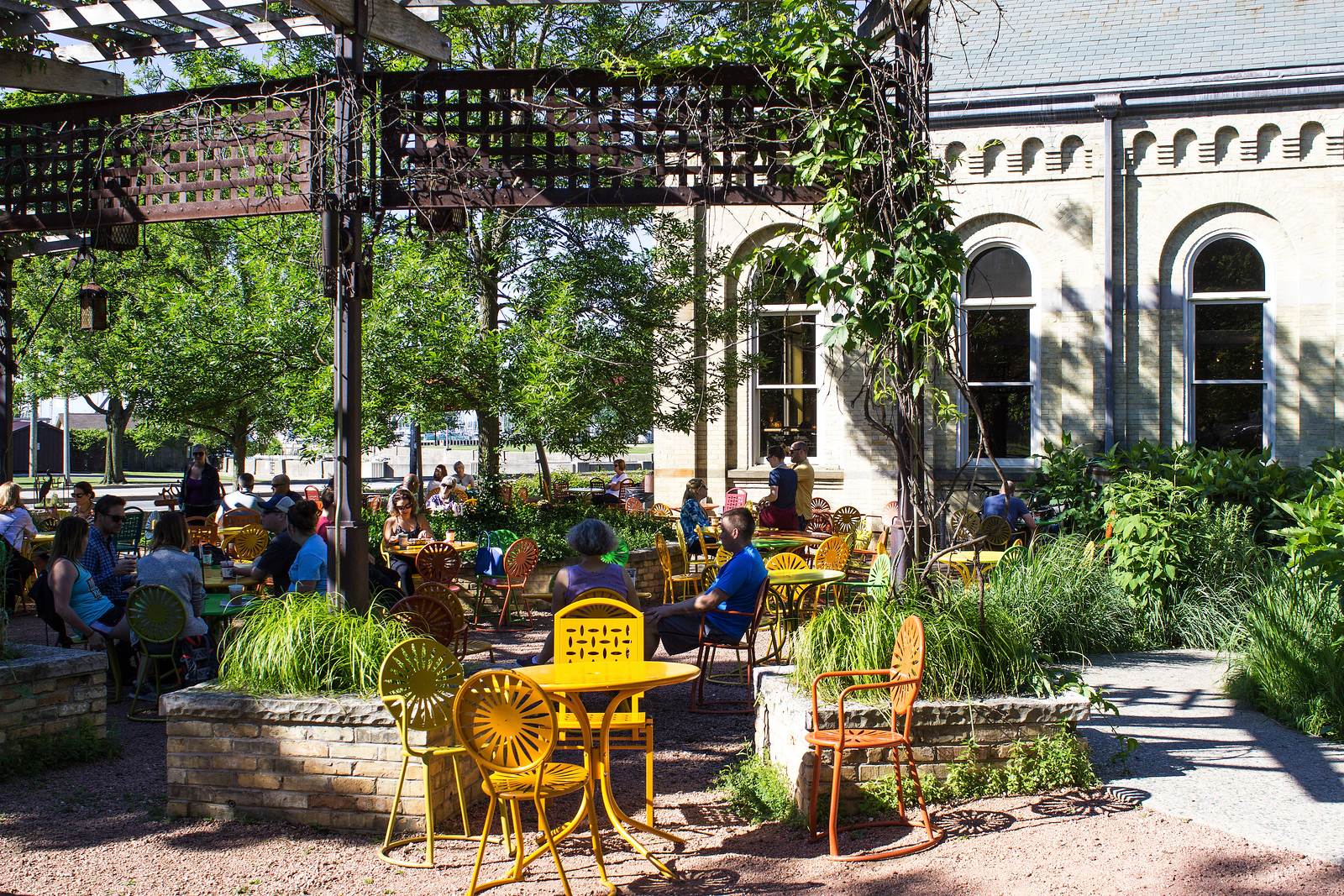 This restaurant is technically in Wauwatosa, so it’s a short drive from downtown Milwaukee. It’s worth the trip! While it might look like only your standard American fare is available, you’ve gotta try the hash browns. The EVOO hash browns are delicious. They contain olive oil, arugula, frisee, onion, and vinegar syrup. I ordered mine with a side of fresh fruit. It was a great start to the day! While Engine Company No. 3 isn’t known for their vegan options, I was able to make a couple of menu items work here. I was able to order my oatmeal with soymilk, and it also came with fresh blueberries on top. I added a side of potatoes to that, and it was a very filling breakfast meal. The gluten-free items are marked clearly on the menu. Engine Company No. 3 is committed to providing fresh, sustainable, and locally sourced food and drink. It’s also in a renovated firehouse, which is pretty cool. 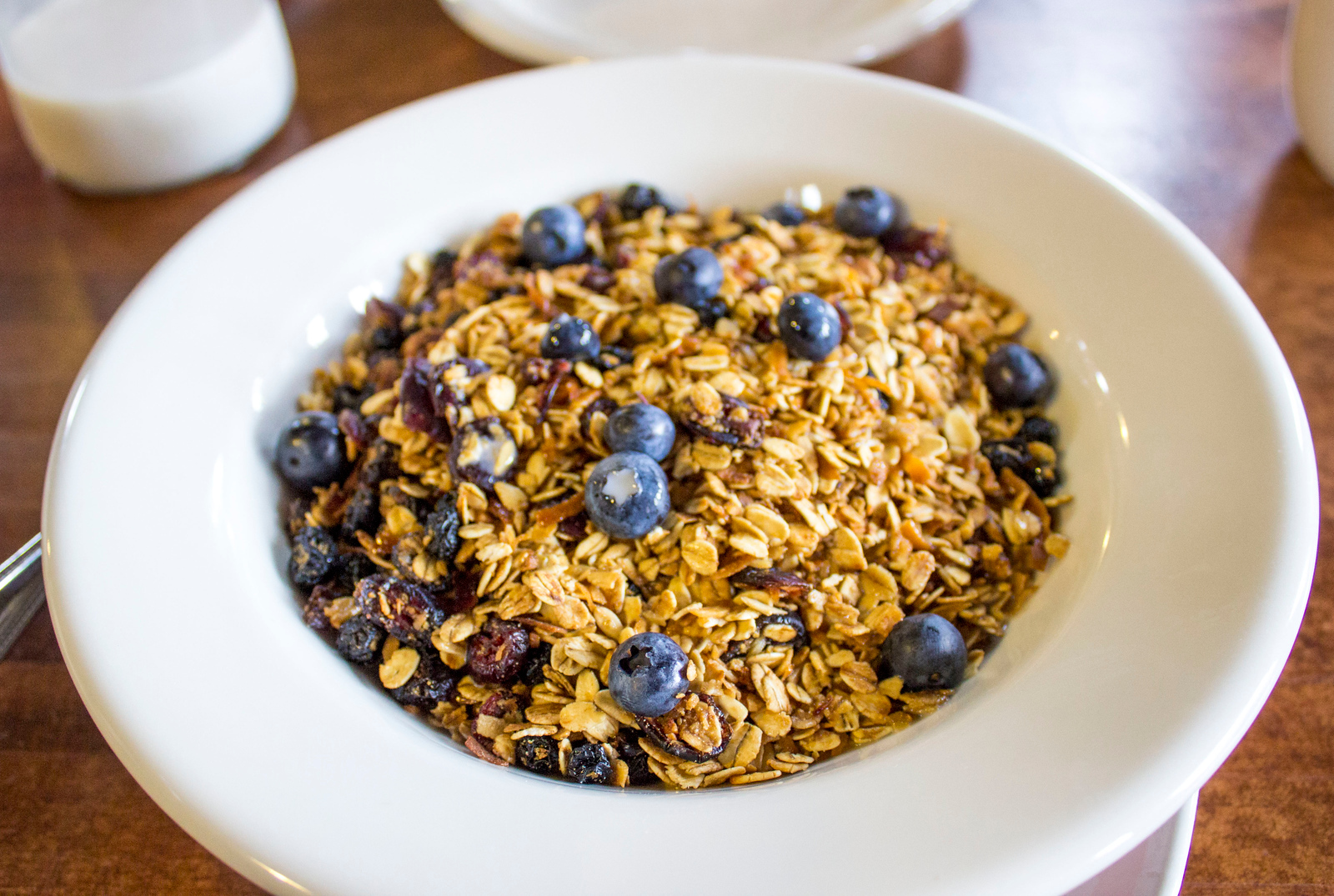 Other Breakfast and Brunch Options:

The Harbor House doesn’t have any vegan items listed on the menu, but that doesn’t mean that the chef won’t whip up something amazing for you. Inquire in advance, and you’ll enjoy one of the tastiest vegan dishes in town! I ate a ratatouille with potatoes in a delicious sauce, topped with fresh greens. I really could have eaten this dish for every meal in Milwaukee and left happy. The restaurant offers a waterfront dining experience. We caught glimpses of the Milwaukee Art Museum when its movable “wings” slowly flapped up and down.

Nearly everything at The National Cafe is made in house, and there are several vegan items on the menu. I ordered a hummus wrap (House-made hummus, cucumbers, carrots, red onion, tomatoes, red pepper, greens, and lemon caper dressing in a whole wheat wrap). The vegan items are clearly marked on the menu, and there’s also a breakfast menu with a few vegan meals.

Beerline Cafe is an entirely vegetarian restaurant with many vegan and gluten-free options. There were so many dishes to choose from – it was a tough decision! In the end, I decided to go for the comfort food. After all, it was my first afternoon in Milwaukee and I was really hungry after my early morning flight. I ordered the Beerline Mac n Cheese and the Horseradish Potato Salad, along with a Grapefruit Banana smoothie. The Beerline Cafe also does breakfast and brunch, including many crepes (savory and sweet), paninis, and other mains (tacos!). 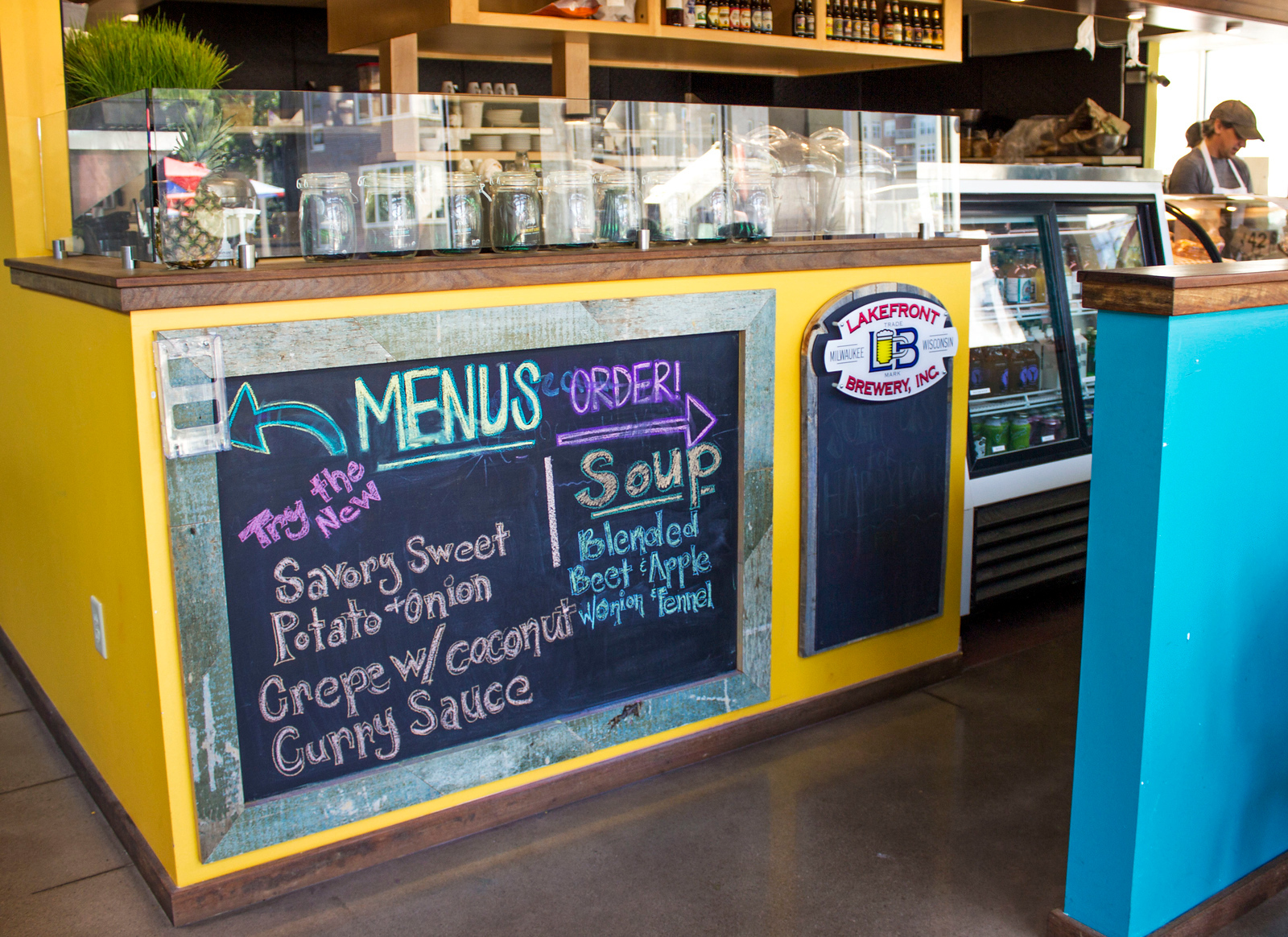 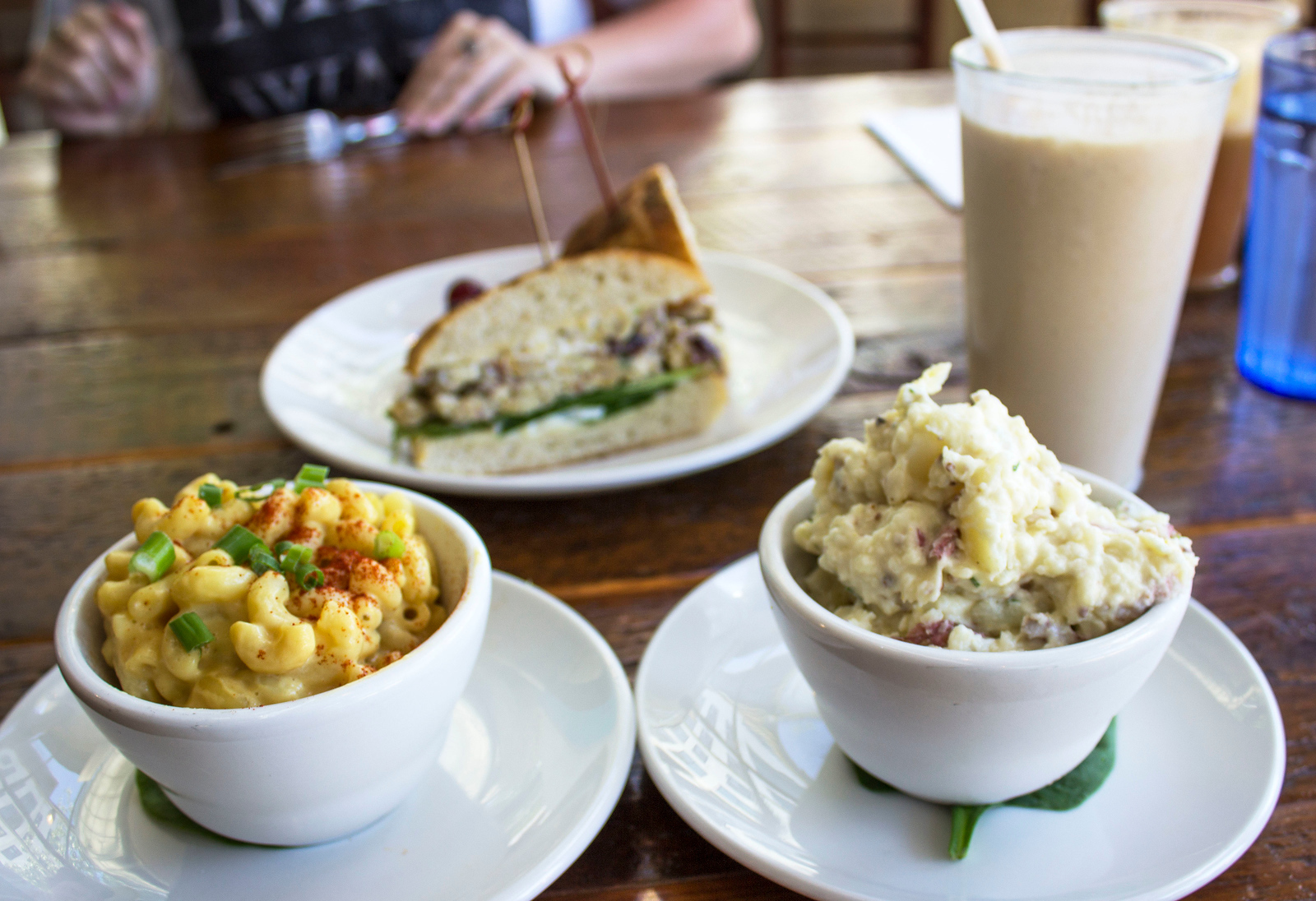 We dined on the outdoor patio, which offered beautiful views of the city. Located near the Lakefront Brewery, it’s the perfect stop for dinner after your beer tour. The vegan options were really exciting and it was difficult to decide what to order. I ate a pizza (cooked perfectly in their wood-fired oven), a crispy cauliflower side dish, and a pineapple cake for dessert. The menu is always changing, and there’s always new vegan food to try. It might be an inflatable sports arena with laser tag, a rock climbing wall, and video games…but they also serve vegan pizza! It’s some of the best vegan pizza in the city, using vegan cheese. I was really excited to see vegan options available here. Grab a drink at the bar and some vegan pizza after you bounce around for a while – yes, adults can bounce in the bouncy arena, too! 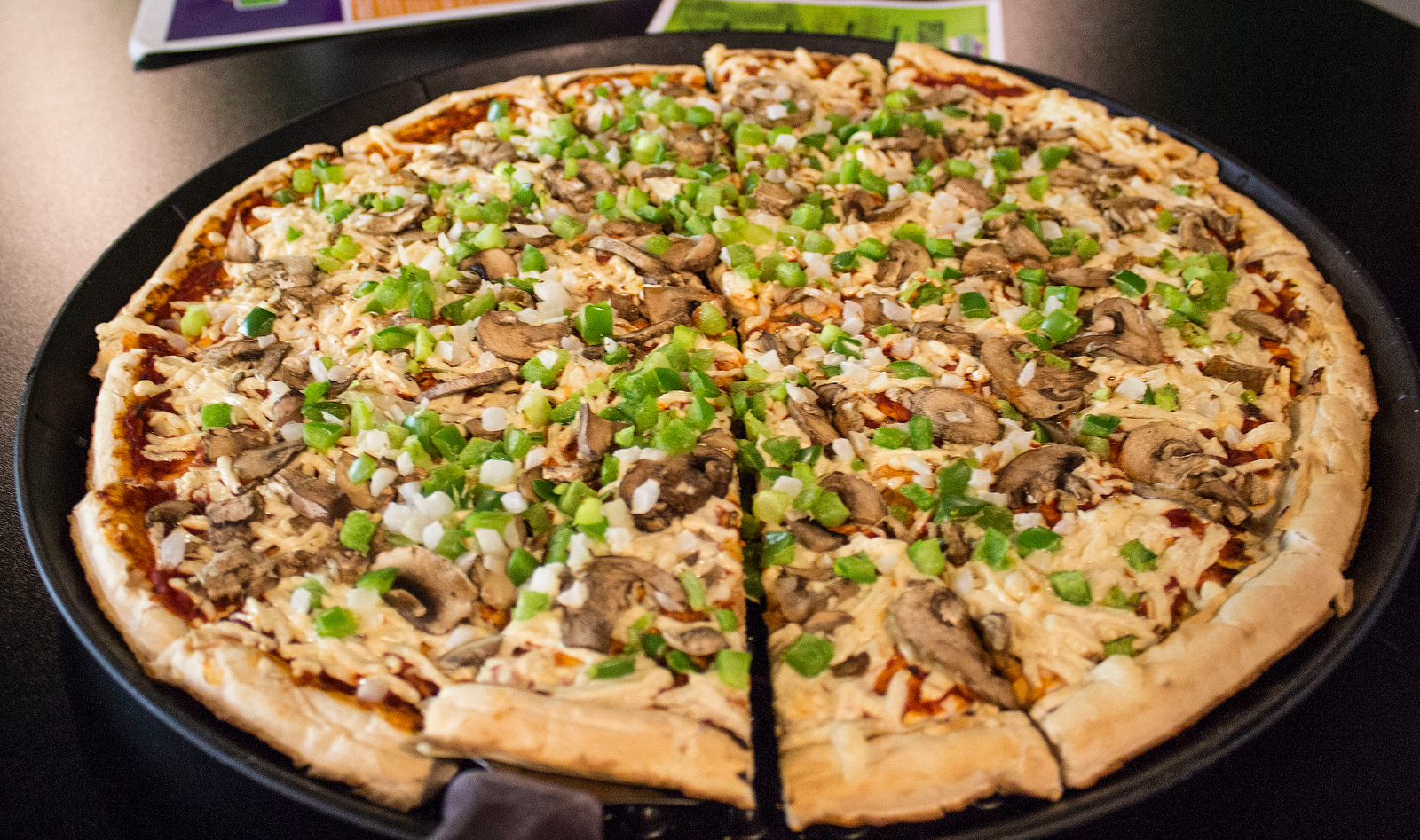 VEGAN AT THE MILWAUKEE PUBLIC MARKET

There were several places to find vegan food and treats inside the Milwaukee Public Market. The Green Kitchen has a tempeh wrap and a veggie wrap, as well as a huge variety of juices for a wholesome meal. Anodyne Coffee has many vegan desserts to take away with you, all clearly marked. You can also order coffee with plant-based milk. Even Kehr’s Candies has vegan chocolate bars in their display window. And though not vegan food related, I picked up an awesome Milwaukee t-shirt at Brew City Brand.

So much yummy vegan food in this vegan guide to Milwaukee!

I hope you enjoyed this vegan guide to Milwaukee. Not only did I find vegan food there, but it was delicious. There are so many vegan options in town that I didn’t even try a fraction of the meals that I could have! Thankfully, I am set to return to Milwaukee in 2017 for the Women in Travel Summit.

So, the question is…

What do you recommend? Where should I dine? What did I miss? i work at colectivo, the oatmeal is NOT vegan, even if you get it with soy milk. it is a baked oatmeal, baked with eggs and milk.

Thank you SO much for letting me know! That's disappointing. I was told that it was vegan. I'll remove it from the list!

I used to hate vegetables when I was still a kid but now I prefer vegan food. I guess our taste buds changes as we grow.

While I’m not a vegan, I know there are good vegan meals and I enjoy them on occasion. I found the hash browns to be interesting, Lauren. Although I’m a big fan of hash browns, it’s hard to find a place that makes them crispy without burning them. It’s also hard to find hash browns with some flavor, but where the cook doesn’t pile on the onions. Seems like Milwaukee knows how to make them (at least one place LOL).

Are you sure the oatmeal at Colectivo is vegan? I asked them about it once, and they said that it is not, although I'm not sure if it was due to butter or egg.

There's two great Ethiopian restaurants in Milwaukee that both have many vegan options. Alem is downtown and Ethiopian Cottage is on the east side. I live almost a hour away and make the trip down to Milwaukee frequently just to eat Ethiopian food.