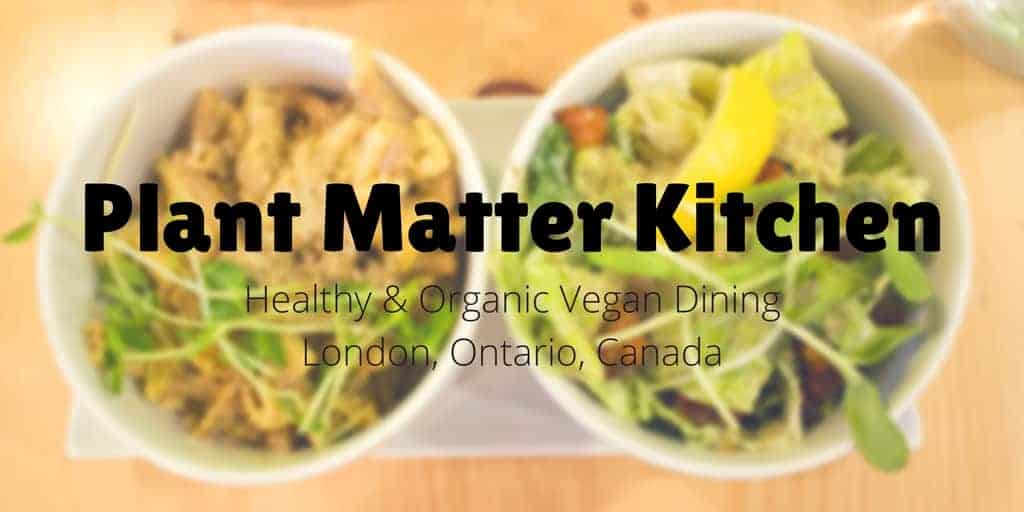 I’m so thrilled that the vegan food scene is alive and thriving in London, Ontario. Plant Matter Kitchen, a plant-based restaurant and juice bar, offers healthy and hearty vegan cuisine that both vegetarians and meat-eaters will adore.,

What sets Plant Matter Kitchen apart from other vegan eateries? To start, this isn’t a junk food vegan establishment (though I do love to indulge now and again!). You won’t find any artificial ingredients, chemicals or weird food additives here. You’ll only find real, organic food. Wherever possible, Plant Matter Kitchen sources their ingredients from local farmers, supporting the local food economy. 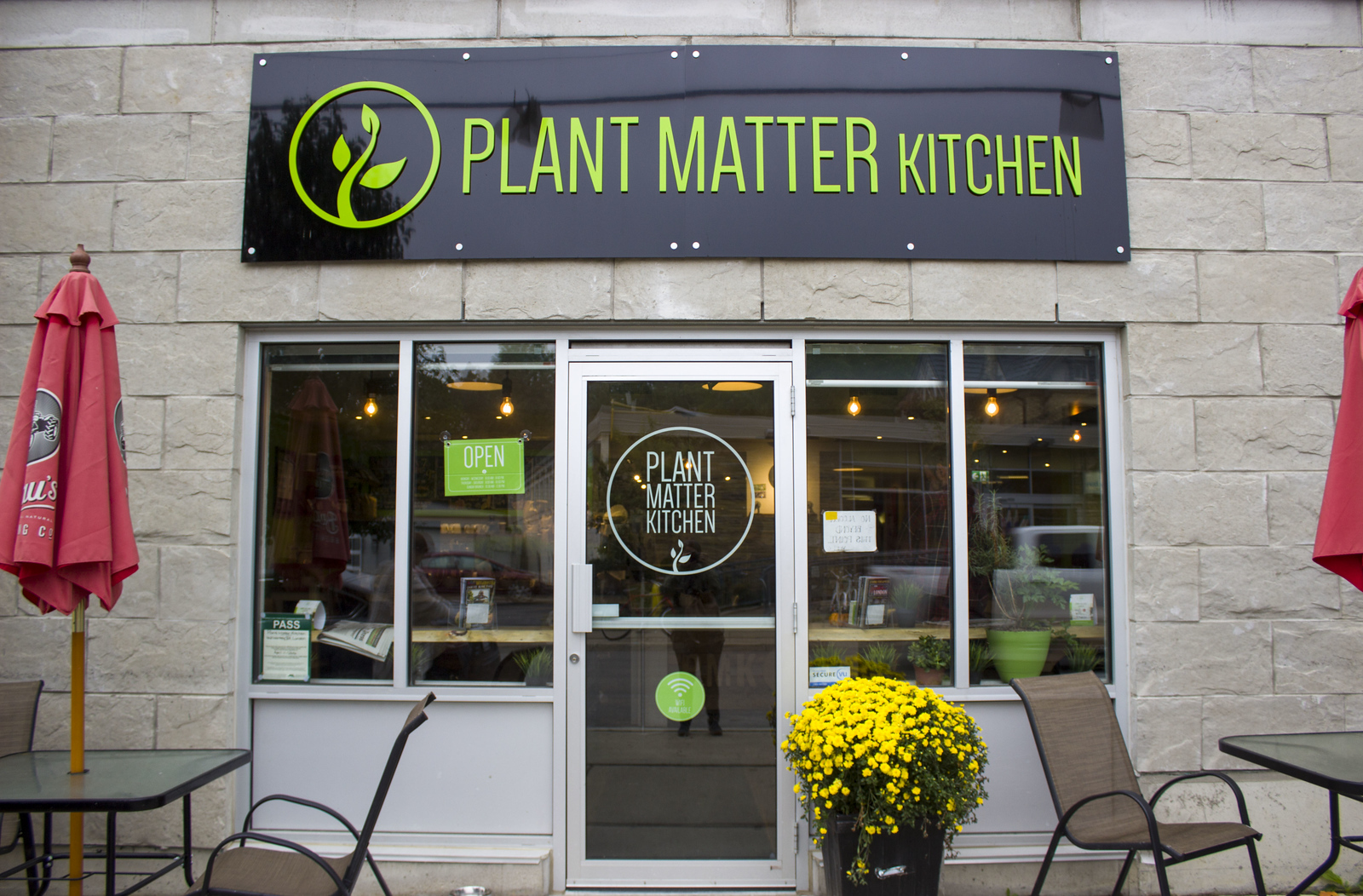 The atmosphere of the restaurant is warm and inviting. It’s earthy and modern, like a contemporary log cabin with lime green walls. Bunches of greenery burst from their pots. Exposed bulbs hang from the ceiling. On the walls, there are posters with quirky puns involving fruits and vegetables.

Thyme to turnip the beet! I’m a little chili. We make a good pear.

There’s an extensive smoothie and drink menu etched in chalk where you can place an order right away for takeout. Or you can stay awhile and enjoy a full meal like I did.

Try not to be immediately tempted by the display of desserts at the front counter. Maybe I have some sort of dessert radar, but I was drawn to them right away. Definitely have an entree, but save room for dessert. 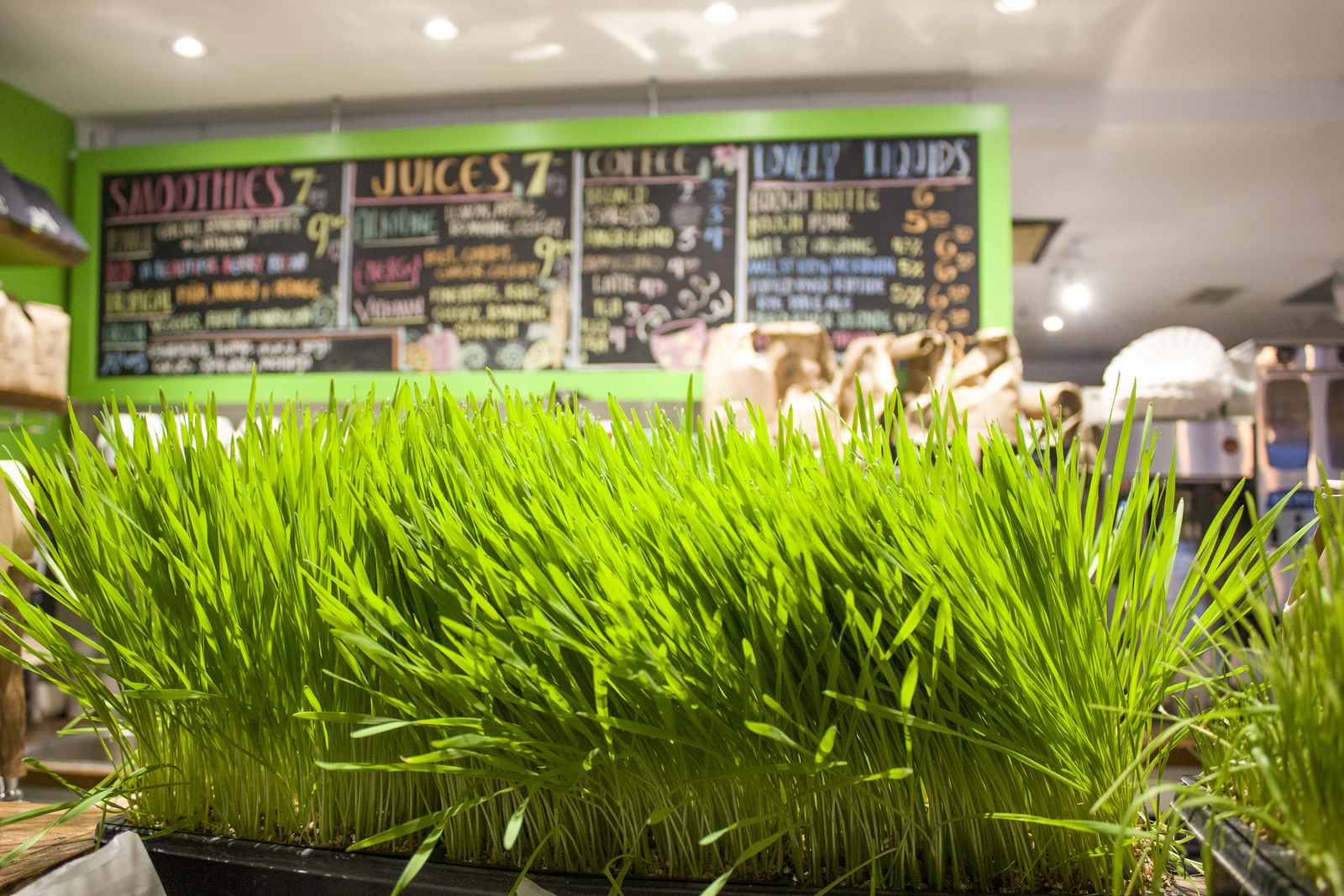 The meals at Plant Matter Kitchen range from traditional vegan dishes to internationally inspired cuisine. There’s something for everyone. Our table chose to split a Nuts for Cheese platter for our first menu selection (a variety of nut-based cheeses served with seasonal fruits, olives, onion jam, accompanied by gluten-free seed-based crackers). I paired this with a Tropical Smoothie (pineapple, mango, orange, banana, agave, chia, dates,and kombucha tea).

Have you tried Nuts for Cheese yet? It’s a company based out of London, Ontario and they make some of the most delicious vegan cheese I’ve ever had. My first tasting experience was at the harvest dinner at Wildflowers Farm in St. Thomas. Thankfully, I’ve eaten several of their cheese varieties since and I’m continually impressed. Dare I say that it tastes even better than its dairy-based counterpart?

For the main course, we placed a few different meal orders: the Shepherd’s Pie, the Ginger Bowl on Quinoa, and I ordered the Mac & Cheese with a Caesar Salad. Some of these dishes traditionally contain meat and dairy. These veganized versions won’t have you missing animal products whatsoever. They’re full of flavor and satisfying, yet you won’t feel weighed down at the end of the meal. You’ll never feel like you need to have a nap after dining at a place like Plant Matter Kitchen. The food gives you a boost of energy because it’s so nutritious!

There are other fantastic selections like enchiladas, pizza, a veggie burger, a pesto bowl, and more. Which one would you like to try the most?

Of course I ordered dessert! It was tough to choose, but I had my mind set on the blueberry donut with lemon frosting. It was fluffy and not overly sweet. Perfection!

The desserts vary each day, so you’ll have to see what’s available when you visit.

London is booming with new vegan restaurants and places offering vegan menu items. You’ll have absolutely no problem dining in London as a vegan. With that said, Plant Matter Kitchen is one of the tastiest and healthiest restaurants I’ve visited. I met with one of the owners, Glenn. He takes such amazing pride in his business and was open about how he started eating a vegan diet many years ago. He’s so passionate about Plant Matter Kitchen, sourcing from local farms, and serving the best and healthiest meals possible.

Treat yourself! Explore London for the day and dine at one of its finest restaurants, Plant Matter Kitchen. 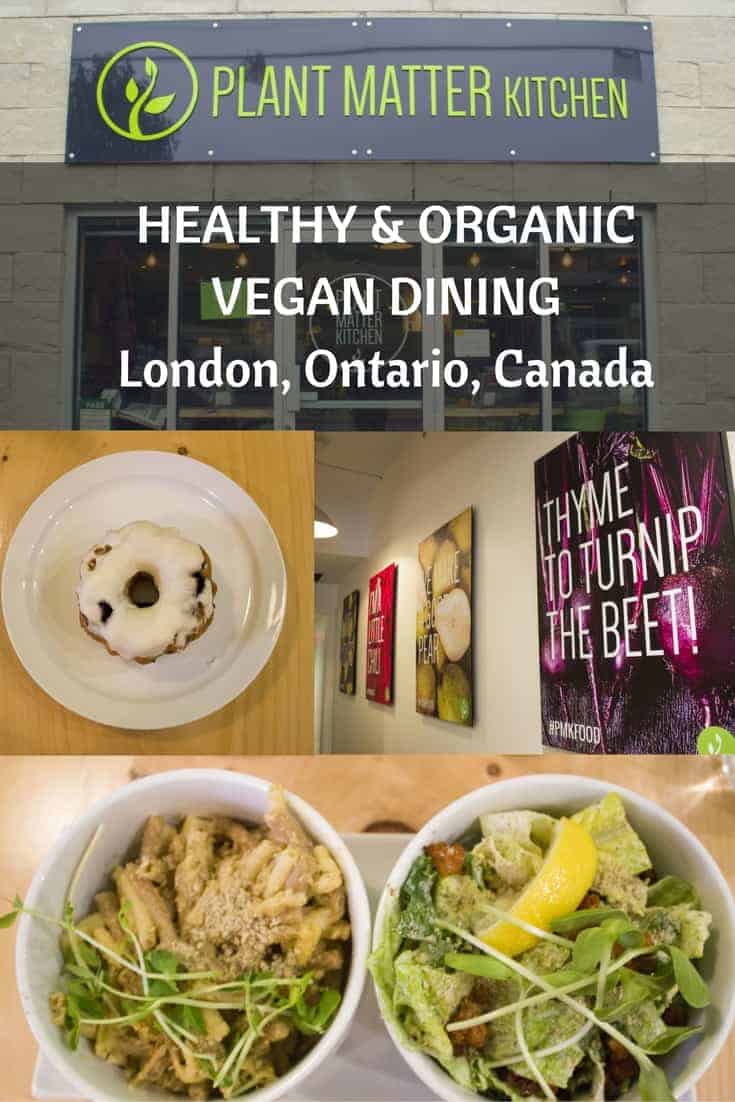