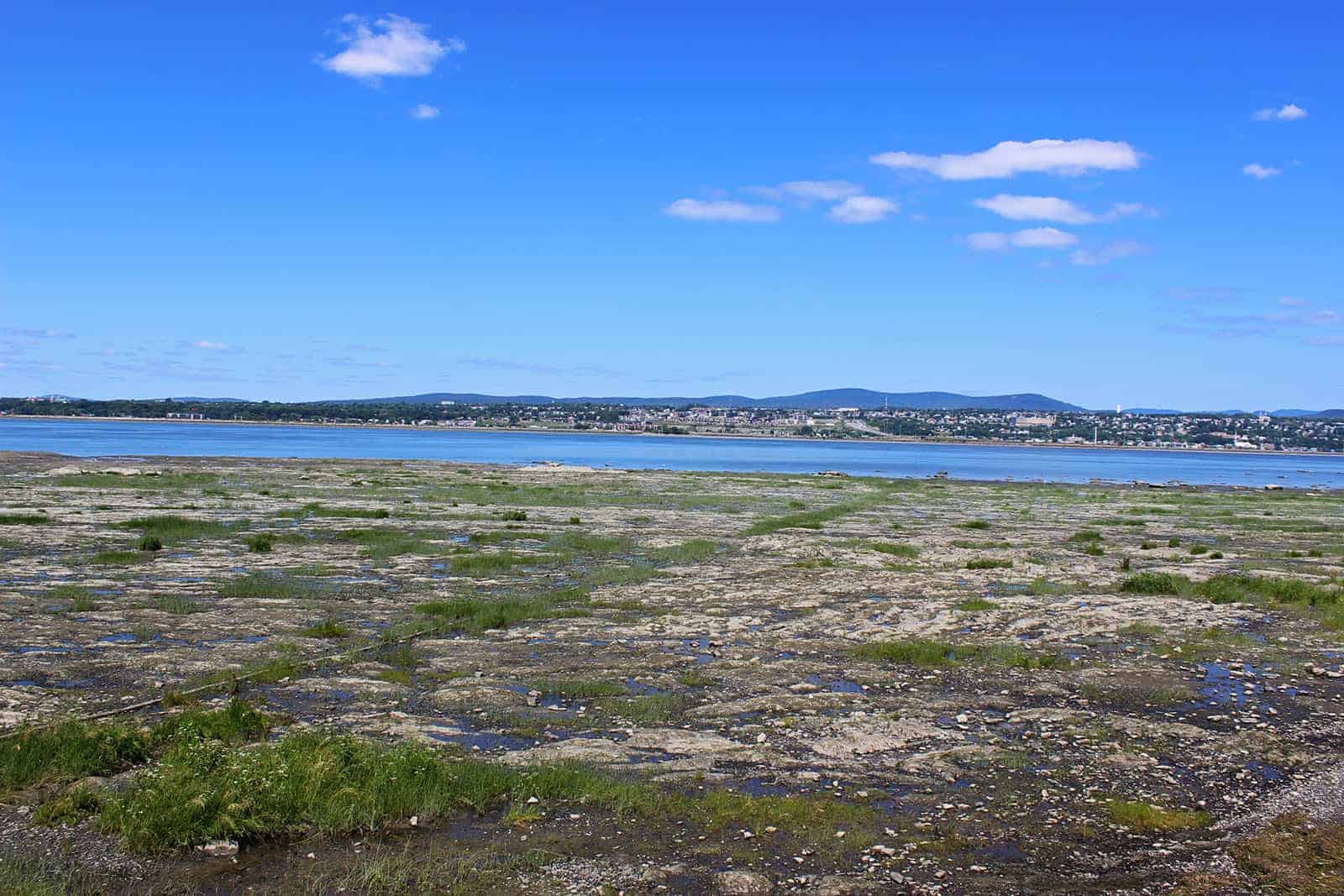 It’s called the “Garden of Quebec”, “Treasure Island”, and the “Cradle of French Civilization in North America”. Located minutes outside of Quebec City, the picturesque Ile d’Orleans makes for the perfect full-day or half-day trip. You can easily combine a visit to the island with a trip to Montmorency Falls, which lies directly across the way from Île d’Orléans, or venture a little farther outside of town to see Canyon Sainte-Anne.

How to Get There

You must travel by car to reach Ile d’Orleans. Once outside of Quebec City, you drive across the Ile d’Orleans suspension bridge, which is a part of Quebec Route 368 and is connected to Autoroute 40. Once you cross the bridge, you are faced with an environment completely opposite to the bustling urban life of Quebec City. The main road in town is called Chemin Royal, which forms a complete loop around the island. You are free to drive or ride your bicycle around the full loop that will take you back to the bridge when you’re done. We drove counter-clockwise around the Chemin Royal.

Ile d’Orleans was one of the first places in Quebec to be colonized by the French, giving it the title, “The Cradle of French Civilization“. A large amount of French Canadians can trace their ancestry to present and past residents of the island. Prior to colonization, the island was inhabited by indigenous tribes. Many people were attracted to live on the island due to its fertile soil, providing the perfect conditions for farming and agriculture. The island remains devoted to farming and agriculture, and has become a popular destination for those interested in tasting local products and regional cuisine. As there is such a bountiful harvest there, it has been referred to as the “Garden of Quebec” or “Quebec City’s Cornucopia”.

Ile d’Orleans is divided into six municipalities, each with its own beautiful scenery, farms, parks, and local businesses: Sainte-Pétronille, Saint-Laurent, Saint-Jean, Saint-François, Sainte-Famille, and Saint-Pierre. By driving along the Chemin Royal, you’ll be able to explore all of the municipalities with various points of interest along the way. If you see a produce stand, a shop, a restaurant, or a particularly lovely view as you’re driving, you can easily stop and spend some time there. You don’t need to enter the island with many plans, but here are some places that you may choose to explore on your journey. 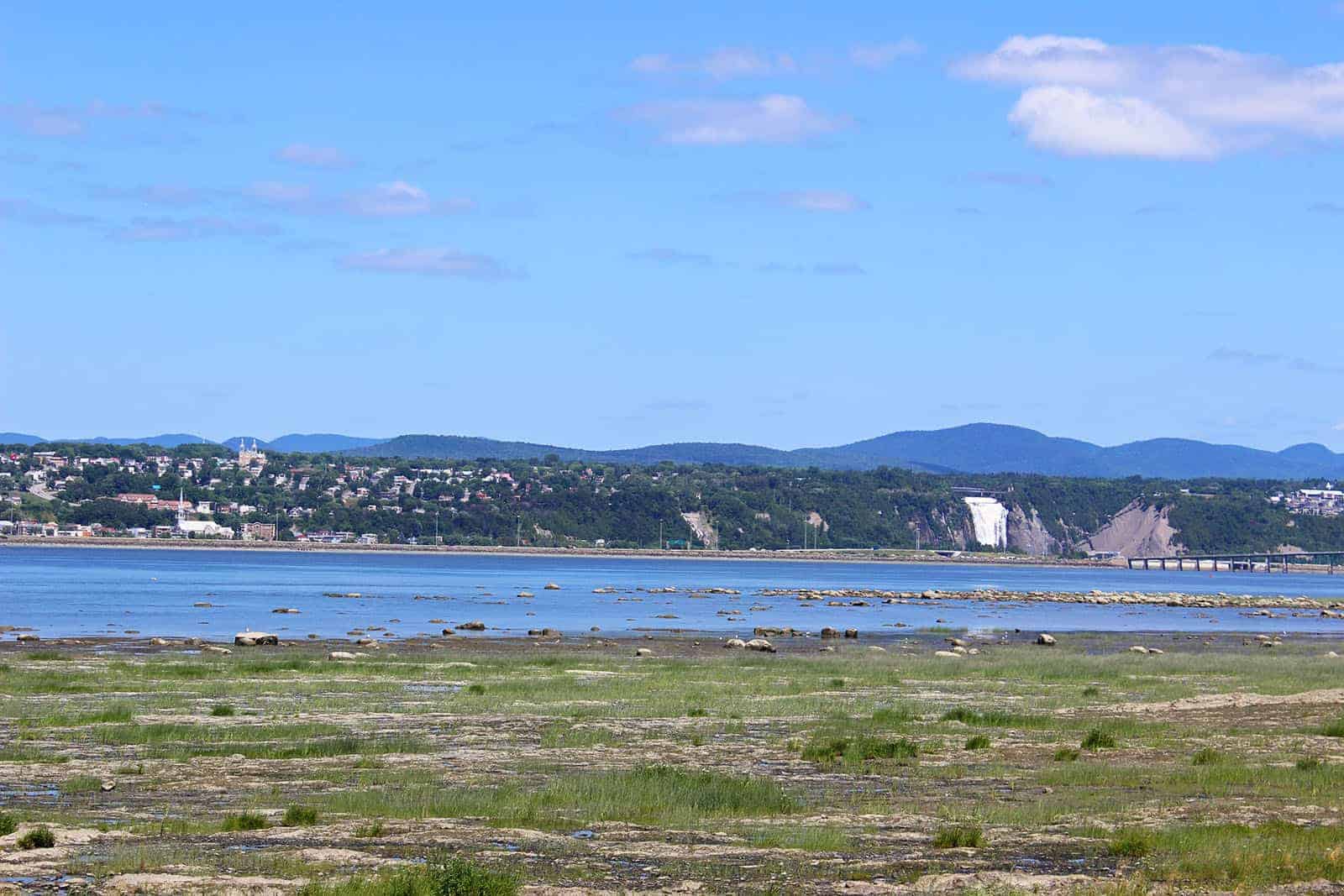 View of Montmorency Falls across the river

We saw a sign noting a scenic viewpoint when we started our drive in Sainte-Pétronille. There were many spots to park the car, so we got out of the car to discover this new landscape. There were great views of both Montmorency Falls and Quebec City from here. 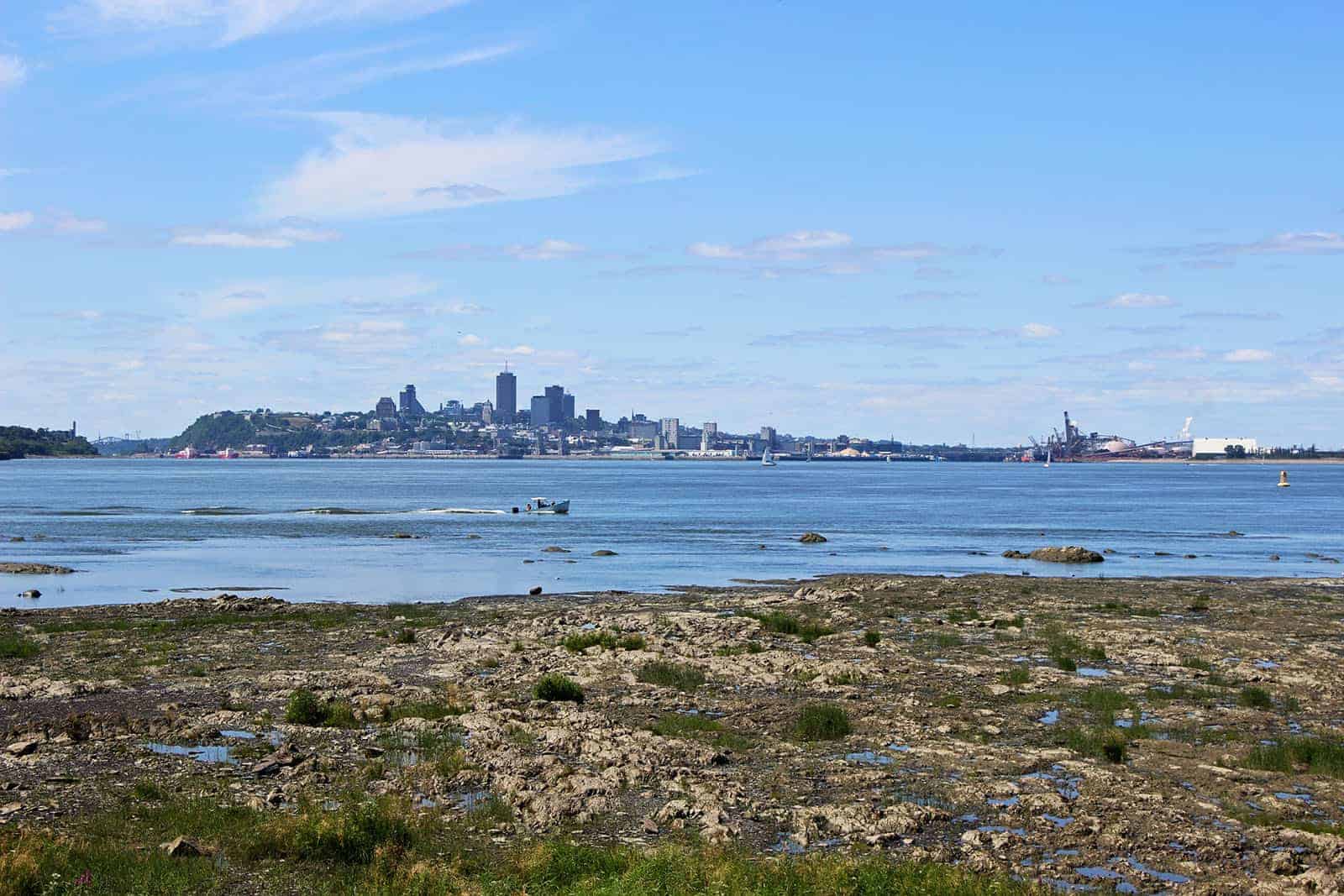 Quebec City, off in the distance

Locally Made Jam In Saint-Laurent 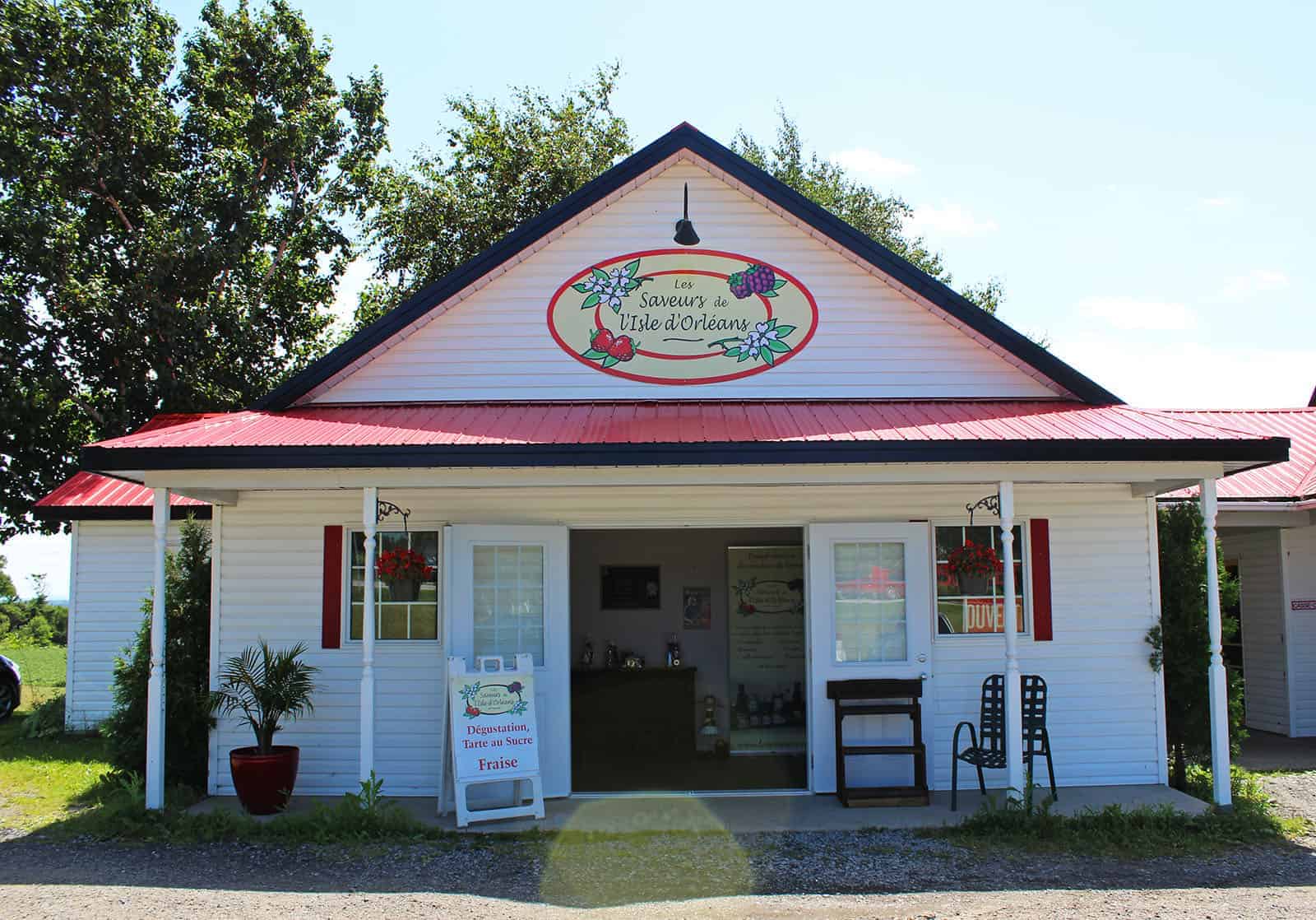 We saw some signs for preserves and condiments made from freshly grown produce on the island, so we had to stop to take a look. At Les Saveurs de L’Isle d’Orleans, there was a huge wall of jams and jellies and you could try a sample of any of them (or all of them!). We ended up coming away with strawberry rhubarb jam and raspberry jam, but it was a tough decision. This was also a great place to purchase gifts for our family members back home. In addition to jam, there were syrups, vinegars, dressings, ice cream and sorbet to try. We walked around the property to discover a huge farm out back where they grow all of the fruit for their products. 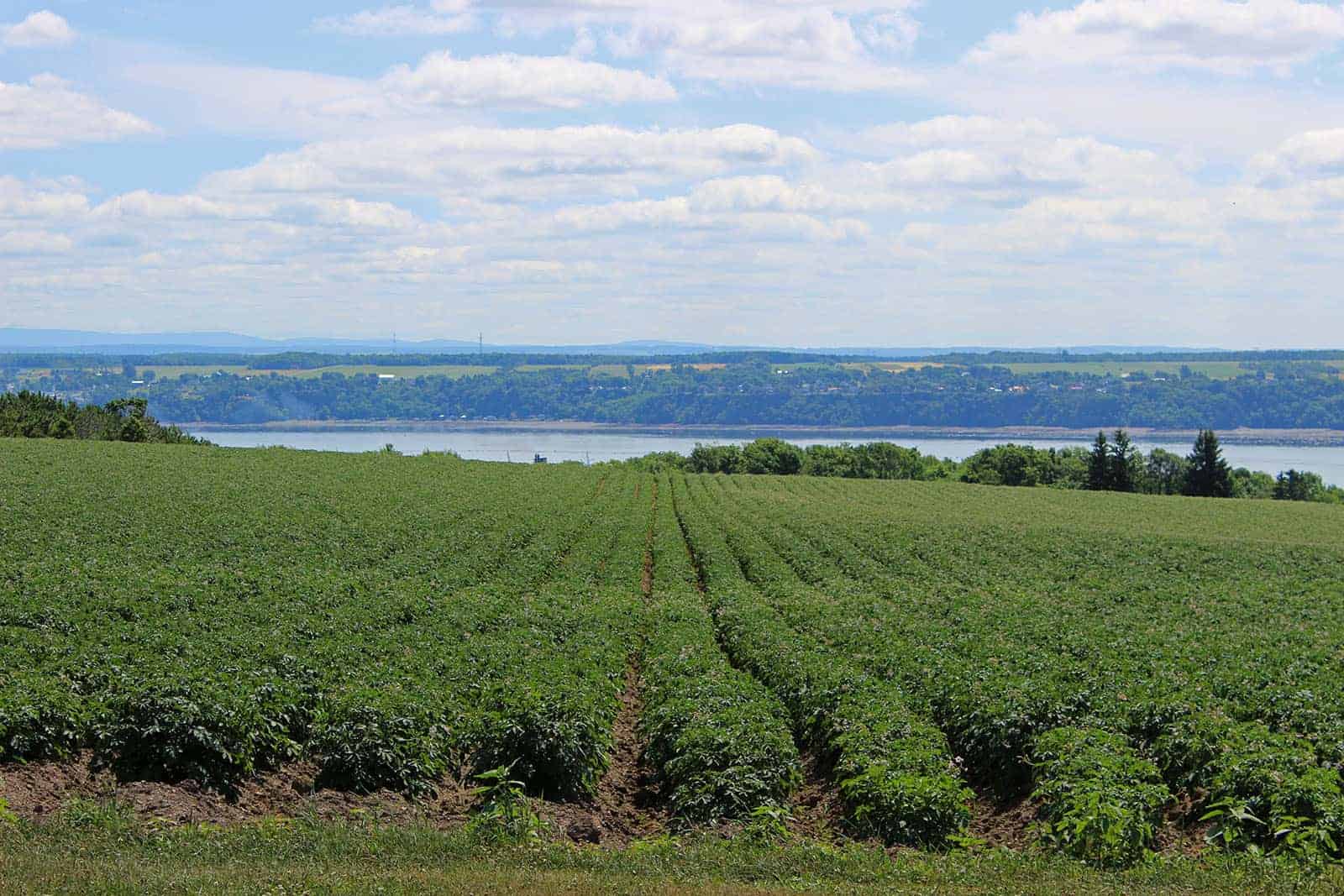 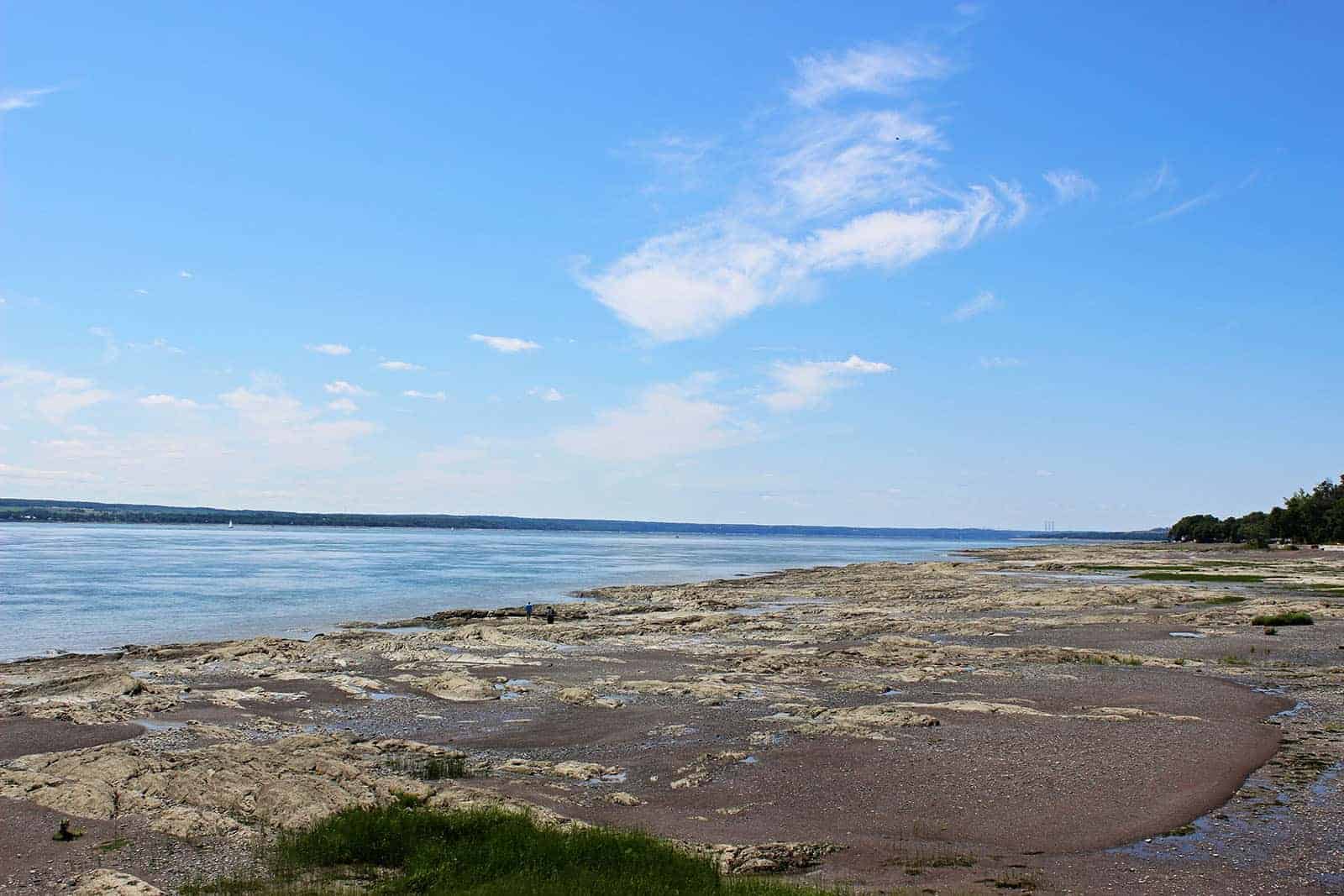 Taking a right hand turn down Chemin du Quai, we found a small parking lot where a few people gathered to check out the beautiful views. This type of gorgeous natural scenery wasn’t something that we expected to see on our Quebec City trip. The sandy and rocky terrain of the land connected with the calmly flowing St. Lawrence River.  We could see some quaint cottages and a church off in the distance. I felt very calm and relaxed here, completely absorbing my surroundings. 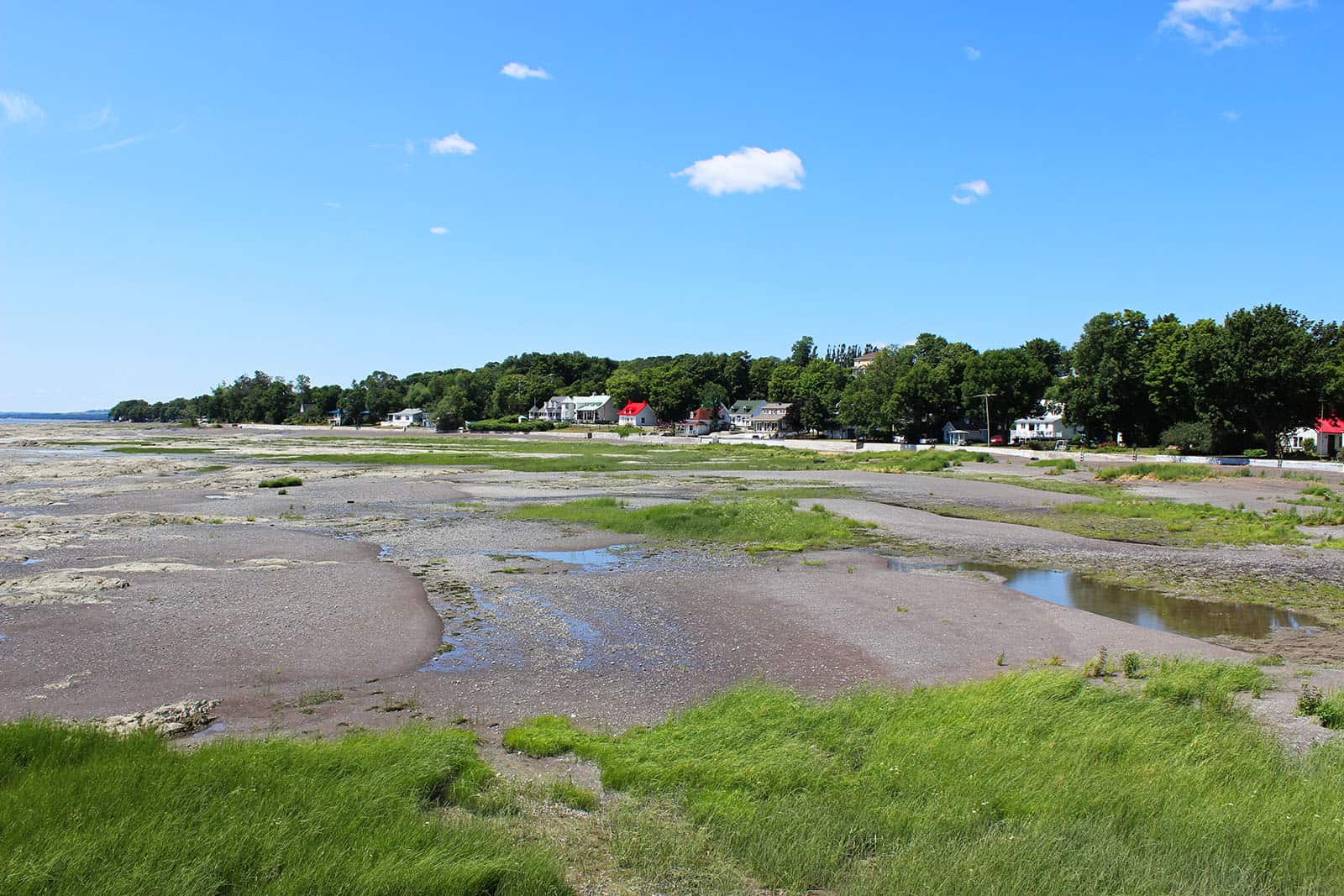 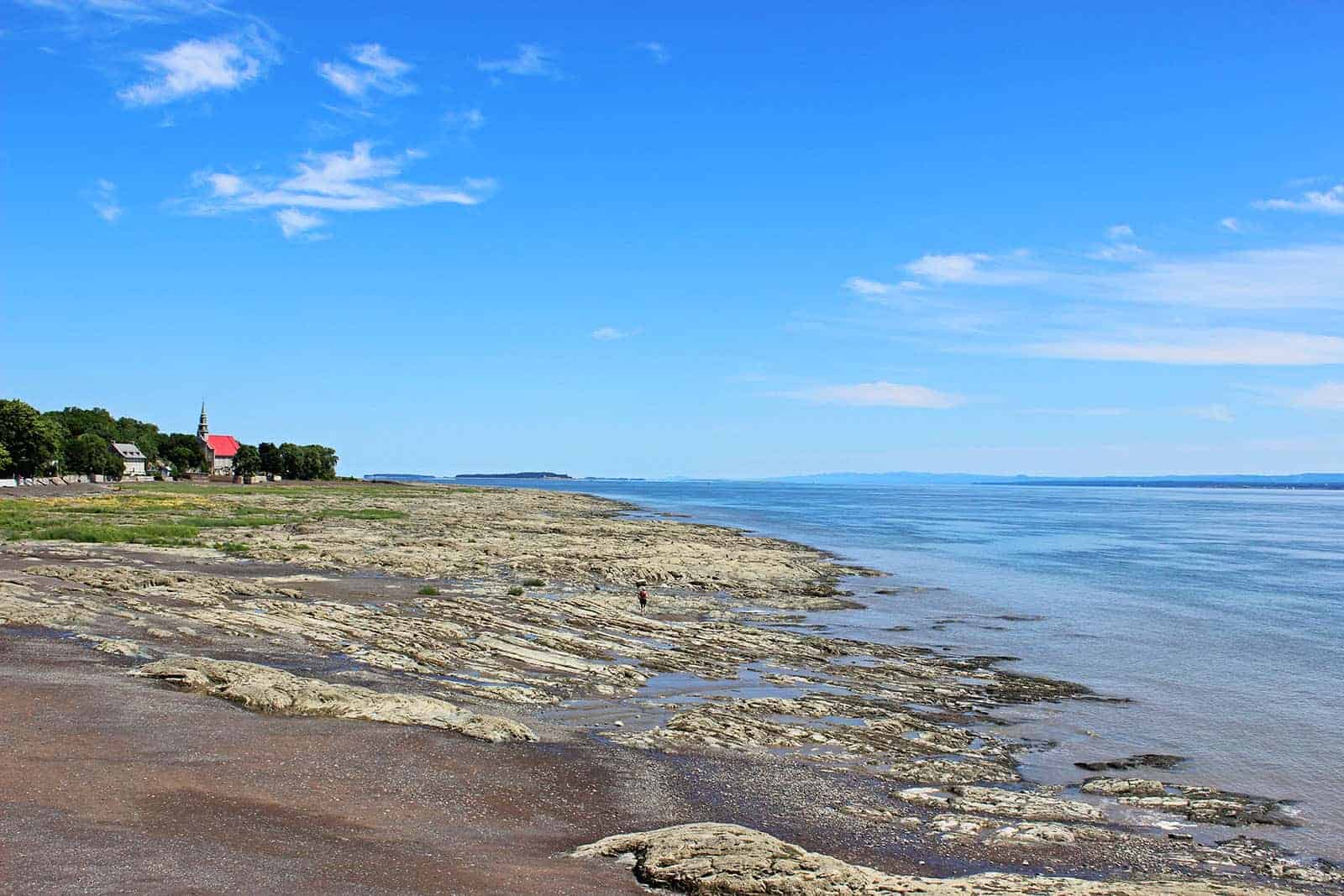 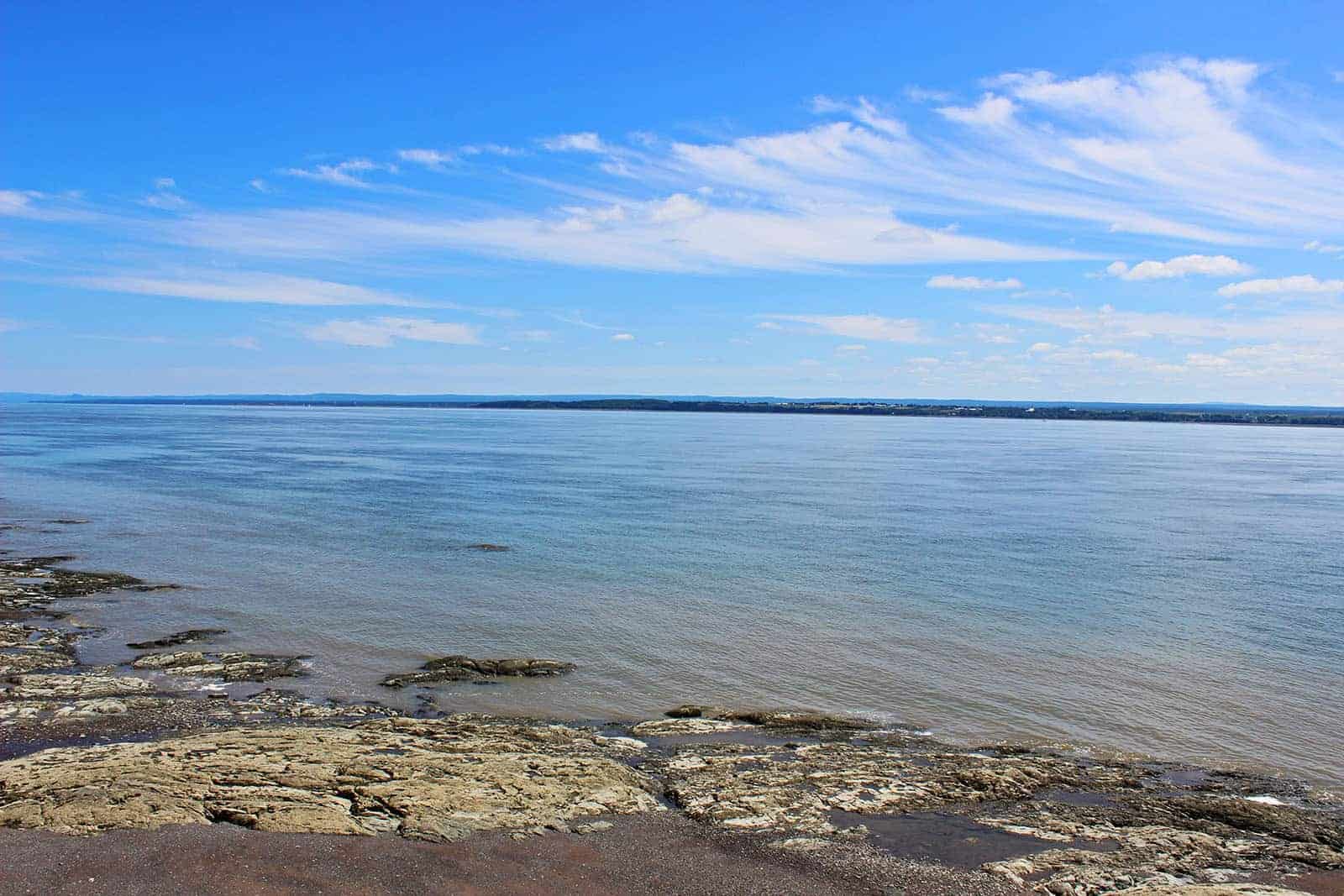 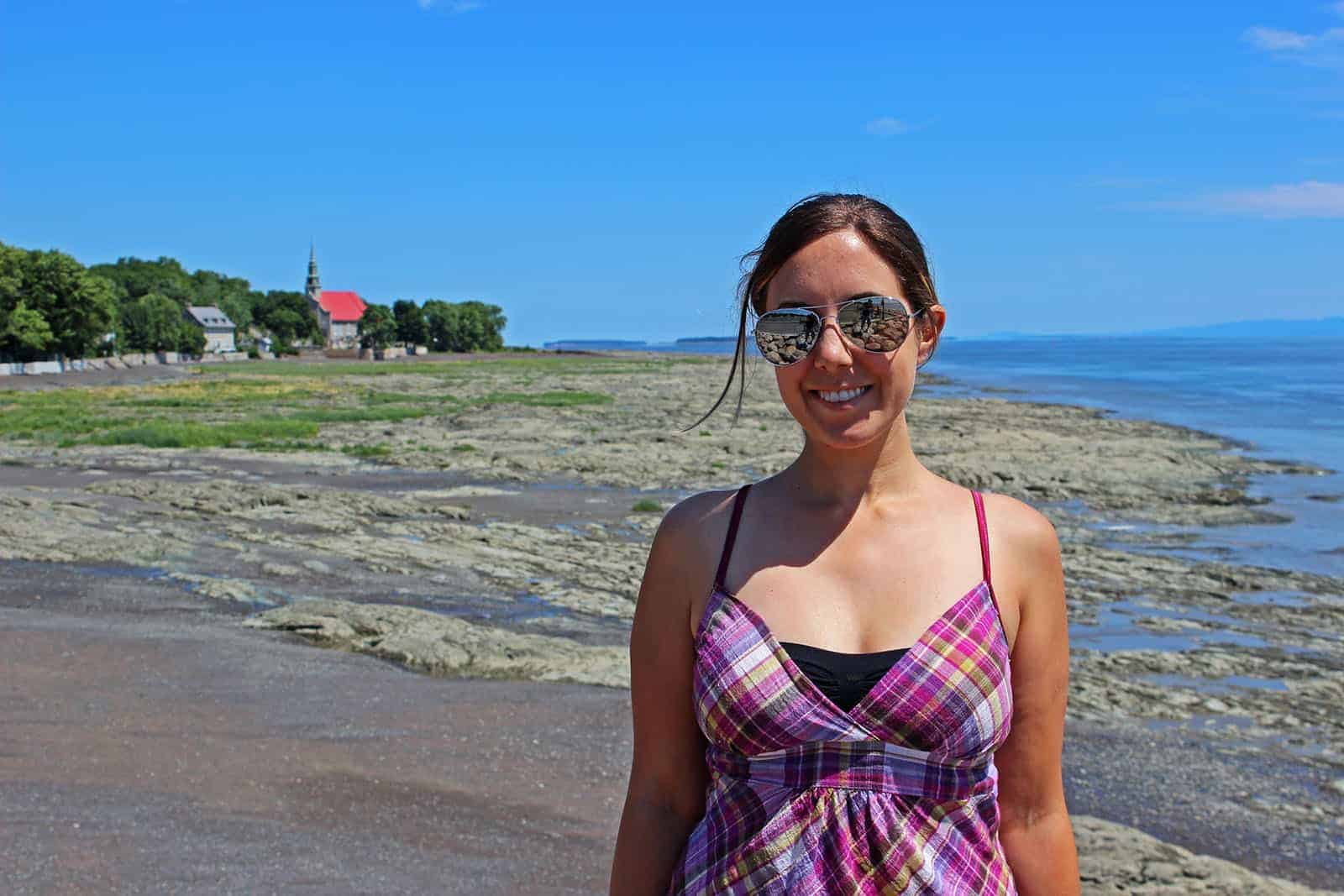 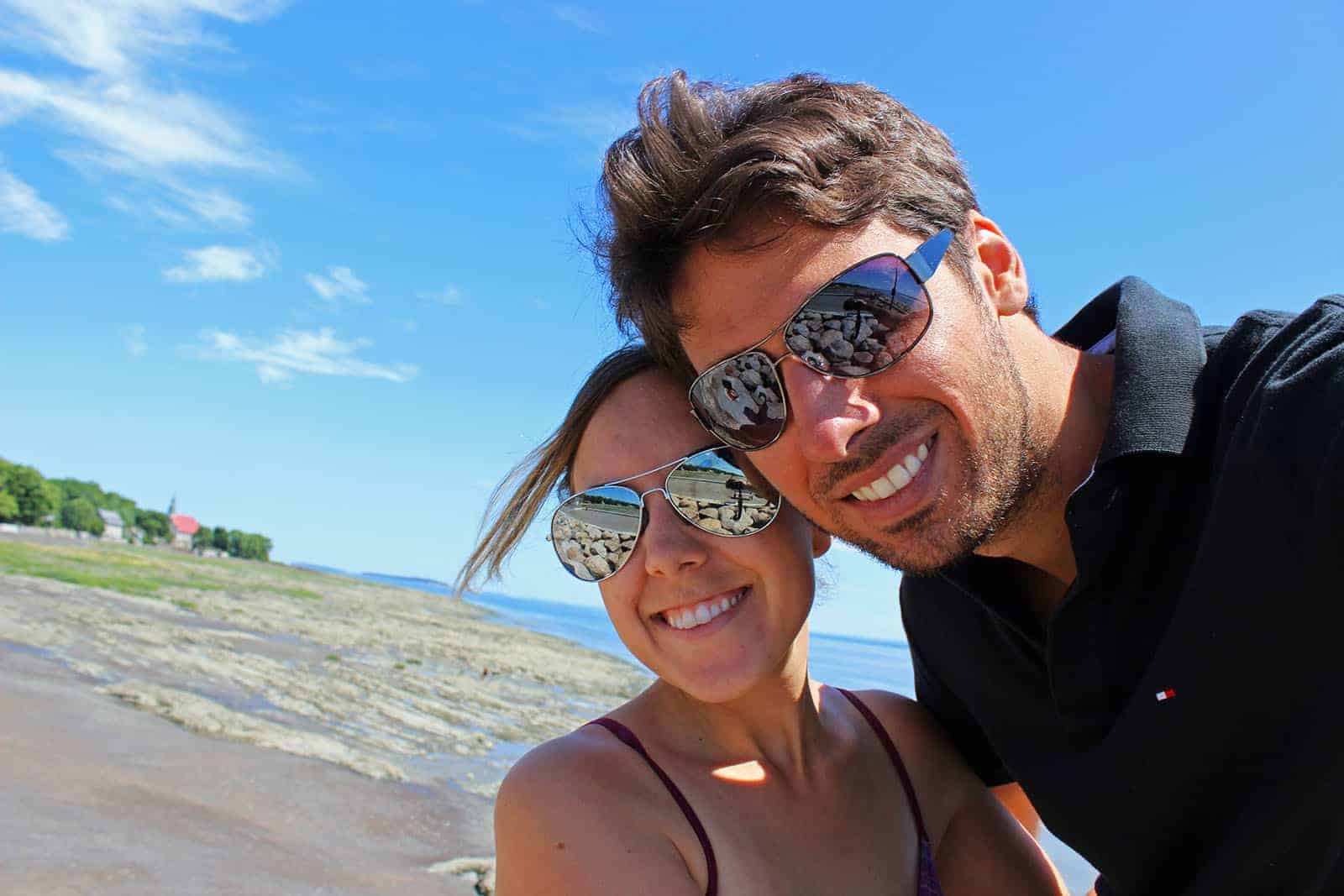 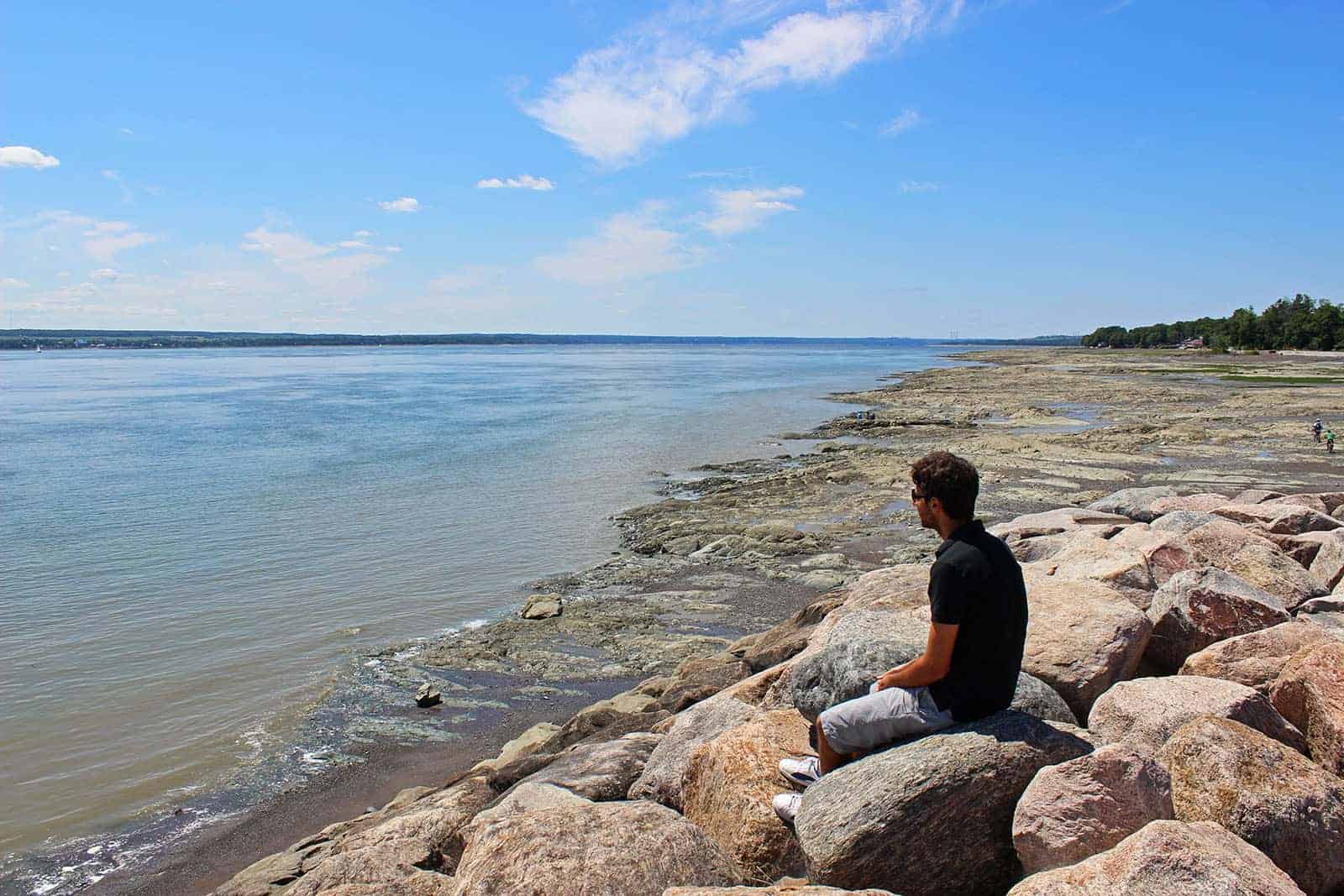 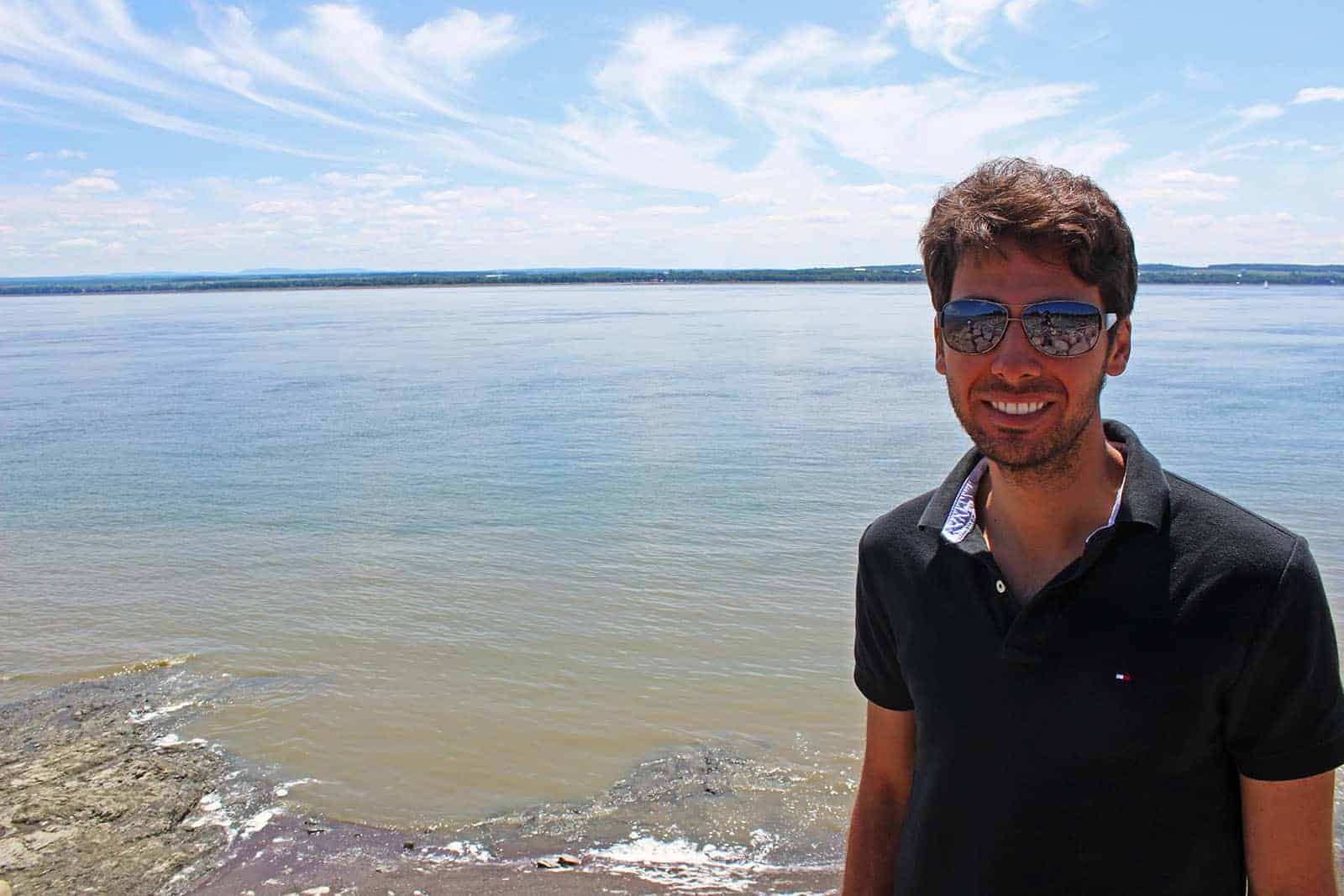 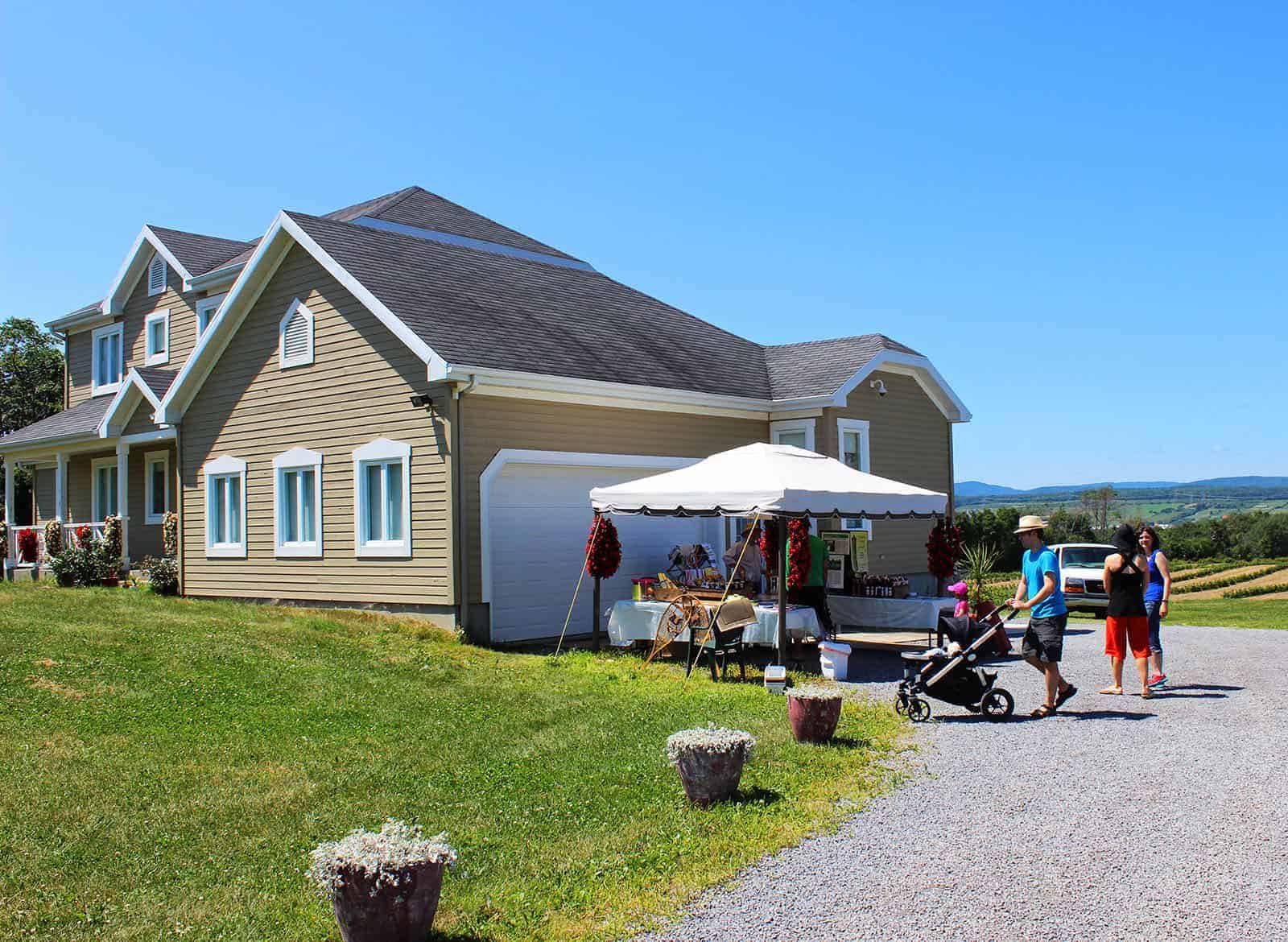 This particular farm we stopped at, La Ferme de Liz Ouellet, specialized in growing blackcurrants, raspberries, and asparagus. Blackcurrants are known as being one of the island’s specialties as they are rarely grown in Canada compared to other crops. The majority of blackcurrants are grown in parts of Europe and Northern Asia. This farm had a little stall arranged outside of their farmhouse with their available products. We got to sample anything that we liked, and tried a variety of fruit wines made using blackcurrants and raspberries. Justin and I both enjoyed the blackcurrant liquor the best, named “L’Incognito.” It was 22% alcohol and could be added to white wine as an extra flavor, poured over ice cream, or sipped on its own. A bottle of that came home with us! 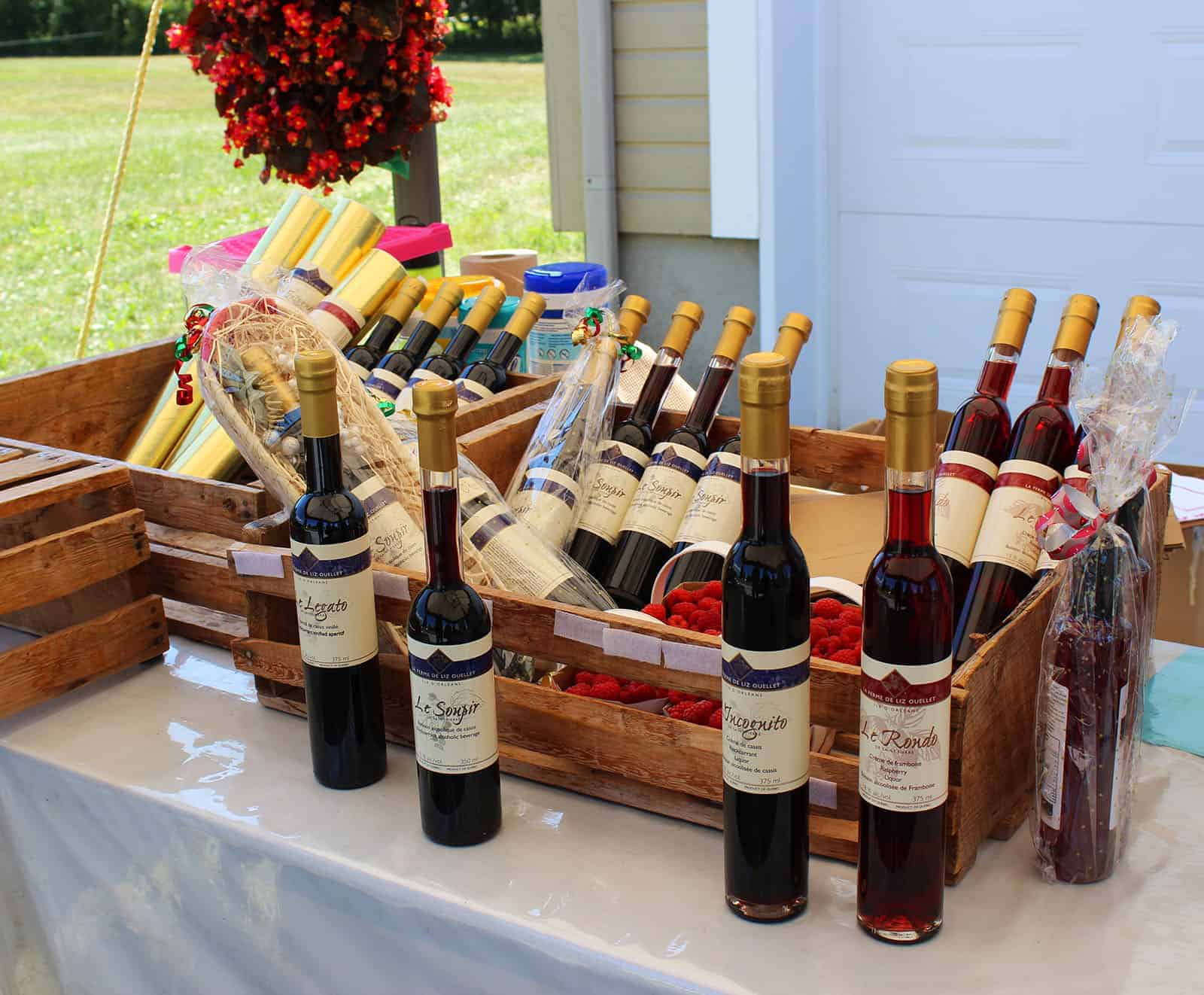 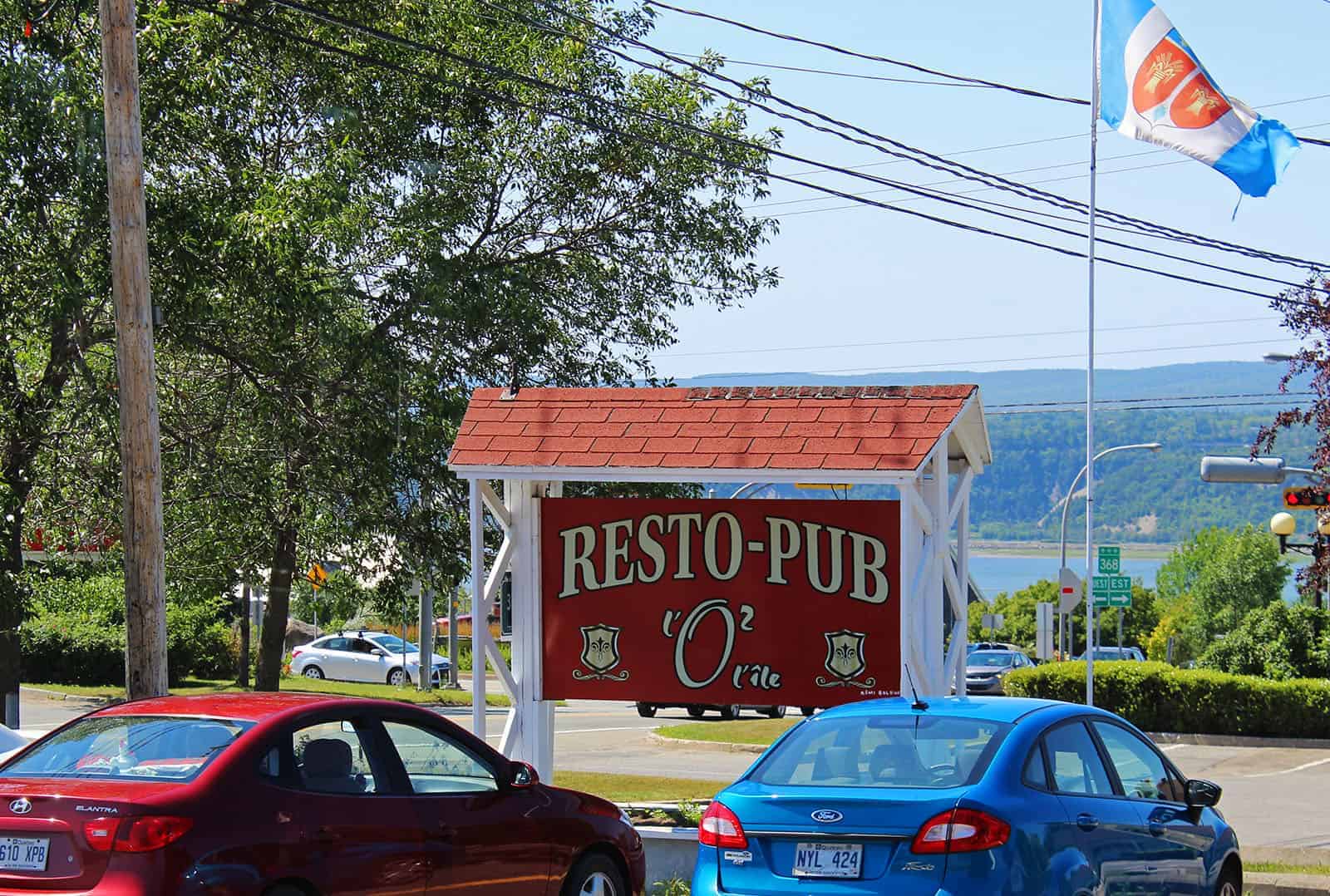 At the very end of our journey, we had driven a full loop of the Chemin Royal and reached the restaurant where we wished to dine, the Resto-Pub L’O² L’ile. Quite the interesting name, isn’t it! This place was very busy when we arrived, as it seemed to be a favourite amongst locals and tourists alike. Our server seemed very rushed off her feet as she tended to tables in half of the restaurant. She also didn’t communicate very well in English, and I actually felt bad that we couldn’t speak French at that moment. So, we tried our best to place our order and thankfully, most of it arrived correctly. We successfully ordered a cheese-less vegetarian pizza made vegan, and two side salads to start. Well, it got lost in translation that we wanted two salads as our waitress brought us only one side salad to share. She rushed off to help the other tables and we didn’t really have the heart to tell her that we required another salad. Justin and I shared the small salad together. It was very fresh and delicious, even though we both only got to try a small portion. We actually were very hungry and ate it before I could snap a picture. As for the main course, we shared this amazing pizza… 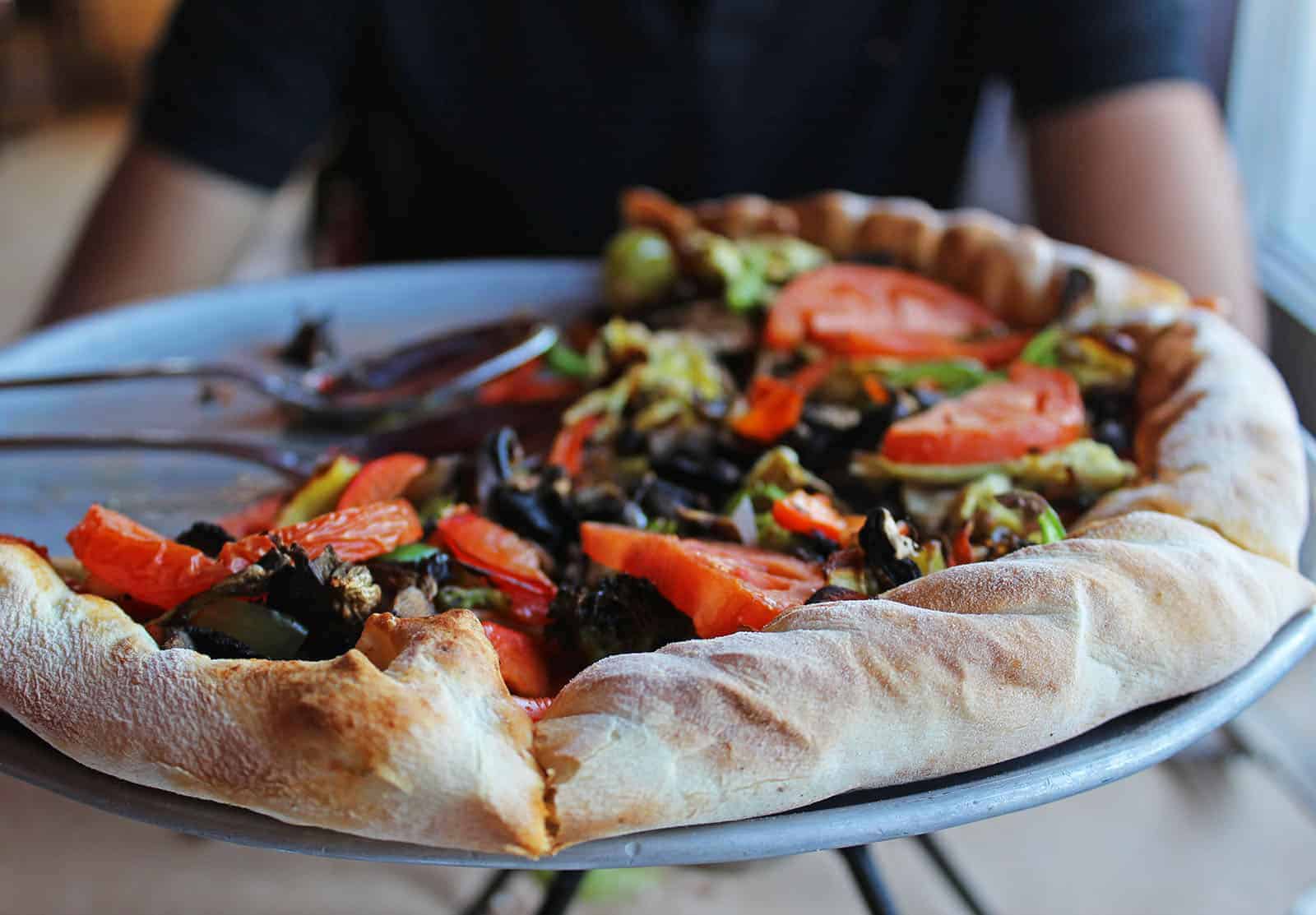 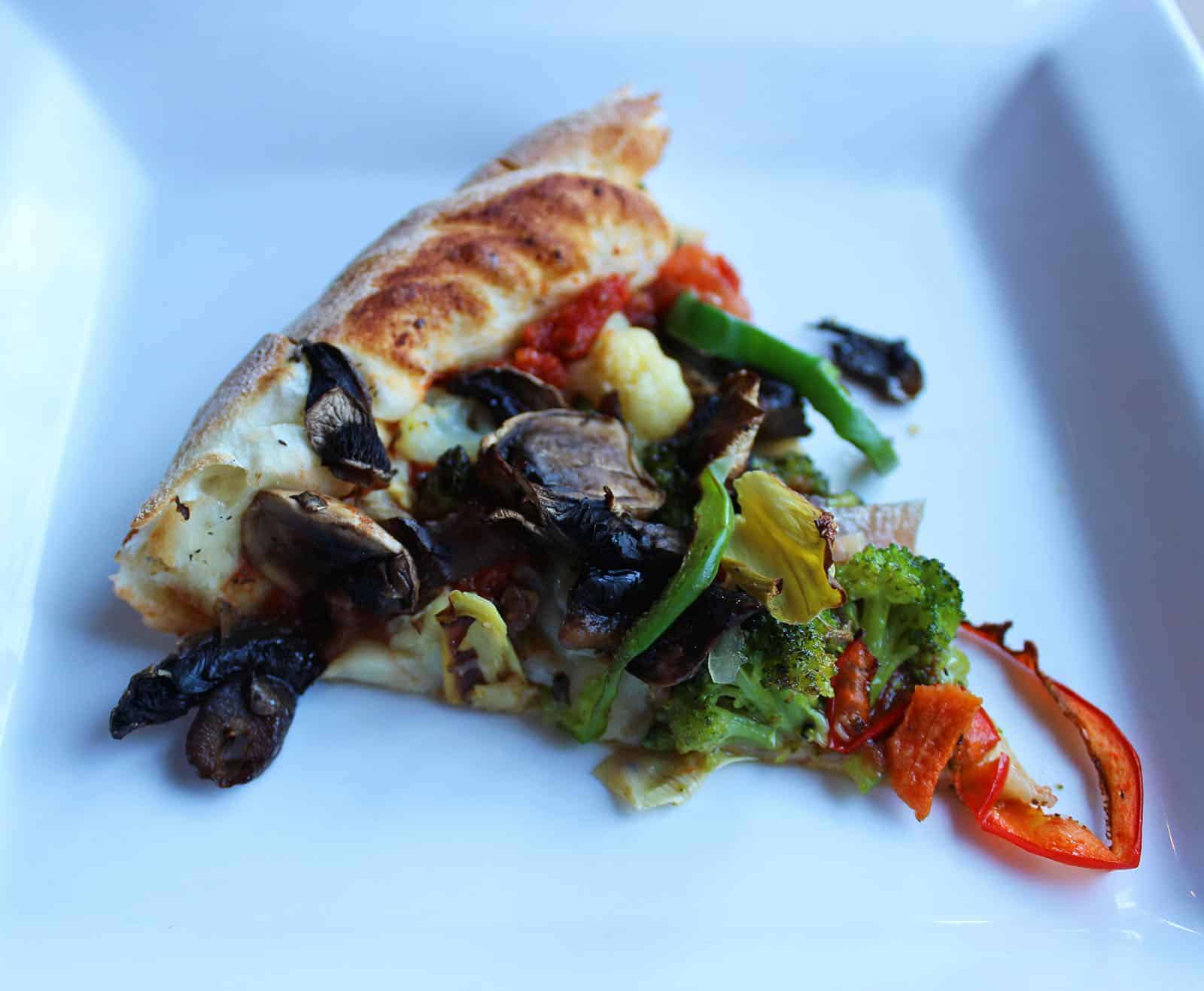 The pizza was absolutely covered in so many delicious vegetables of all kinds! We were really pleased with how it tasted and ate every last bite! Even though service was a little bit slow here, it was definitely worth the wait. As we finished our meal, the amount of customers in the restaurant had definitely decreased. We must have arrived during a lunch-time rush. I would highly recommend coming here for a meal, although you definitely won’t have a difficult time finding places to eat on this island. Between the restaurants and local produce stands, it might be hard narrowing it down to just a few places. There were also other wineries and brewpubs where we could have stopped. We’ll just have to save that for next time. 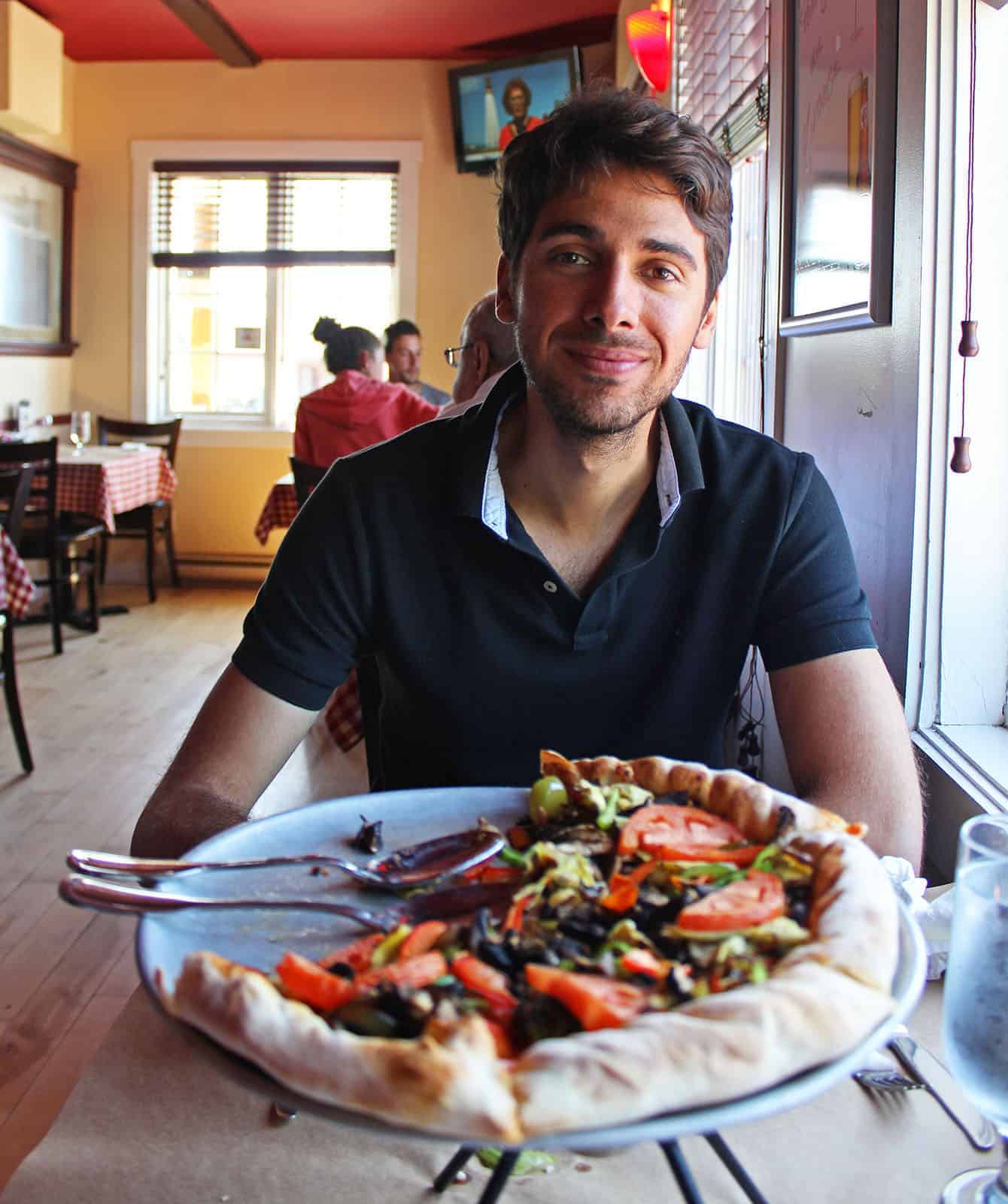 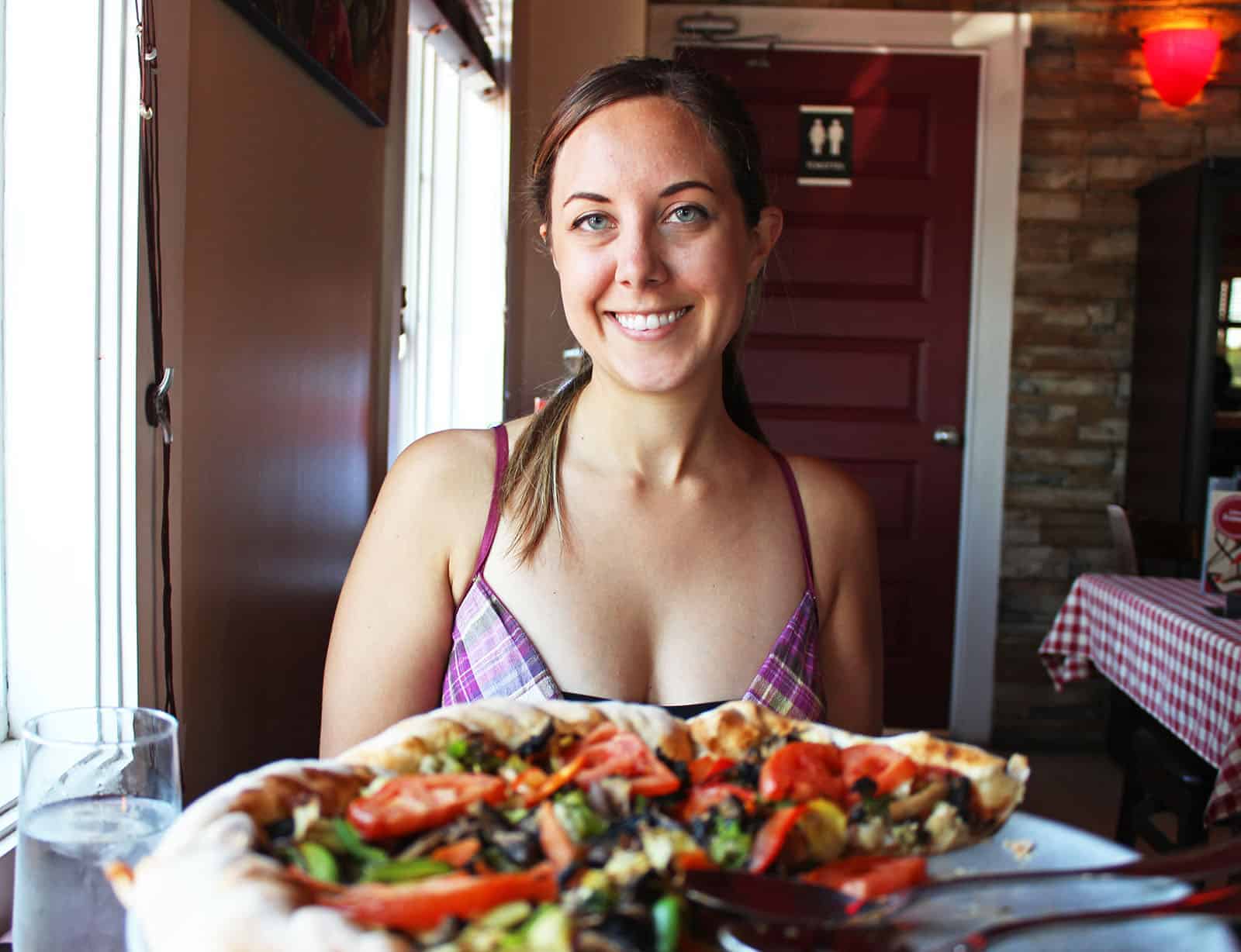 Amazing high quality photos! It makes me want to take a trip there!

Ile d’Orleans looks absolutely beautiful! I could totally spend a day here sightseeing and shopping. The pizza looks delicious. I love the variety of stores and jams/jellies/fruits that are for sale. Yet, another reason for me to start putting Quebec higher in the travel bucket list. Beautiful photos and scenery!

Looks like a great time! I've been wanting to get up to Quebec for quite some time now, and this makes me want to go even more! That pizza looks so delicious, too!!

Totally stunning. I love cities with natural paradises not far from the centre and you've given me yet another reason to visit Quebec City. Love the new world French vibe!

Wow the views look absolutely amazing - this looks right up our alley with not too much tourism and access to spectacular nature!