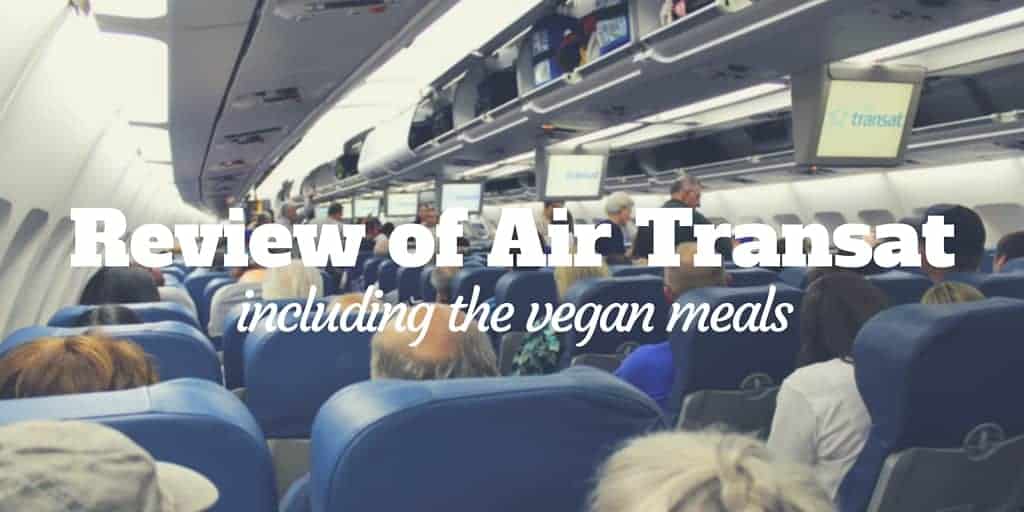 We’re baaaaaaack! We’ve returned home from spending three weeks in Italy. It’s good to be back to the world of travel blogging at last. We took a small hiatus from blogging while traveling so we could be fully immersed in our new surroundings, and now we’re back with so many stories to tell. Let’s start back at the very beginning with our flight. Actually, I’ll tell you all about both of the flights on our trip, like two giant bookends on either side of our Italian holiday. There was a flight at the beginning of our trip from Toronto to Venice, and the one coming home was out of Rome. Both of these flights were on board similar Air Transat planes. We’ve both flown Air Transat before, though they were shorter flights to Fort Lauderdale and Dominican Republic. As you can tell from the above photo, we were seated at the back of the plane.

We chose to sit at the very back of the plane (seats 31 A and C). To choose your seats on Air Transat, you have to pay a small fee of $20 per seat selected (unless you choose one of the more “premium” seat choices where you get extra leg room, like at the very front of the economy section or at one of the emergency exits, where you would pay a higher fee). We chose the very back of the plane for a couple of reasons. First, it was one of the few spots on the plane where we weren’t in a row of three seats. There were only two seats beside one another, which was more appealing as neither of us would be stuck in the middle seat. Second, there wouldn’t be anyone sitting behind us. We wouldn’t have to deal with anyone kicking our seats. Plus, we could recline our seats as much as we liked without having to worry about leaning too far back into someone’s personal space.

Here’s why it was a very bad idea to choose these seats, at least on our overnight flight from Toronto to Venice.

I really wanted to sleep during this flight. We left at 10:30pm in Toronto, arriving at 12:30pm in Venice the next day. It was a nine hour flight. I know it’s difficult to sleep on planes, but I was trying several different things to assist my body in nodding off to a wonderful dreamlike state. First of all, I woke up really early in the morning that day to ensure that I could fall asleep easily that night.

There was a David’s Tea at the airport, so I bought a sleepy-time tea there that would put me into a relaxed state. 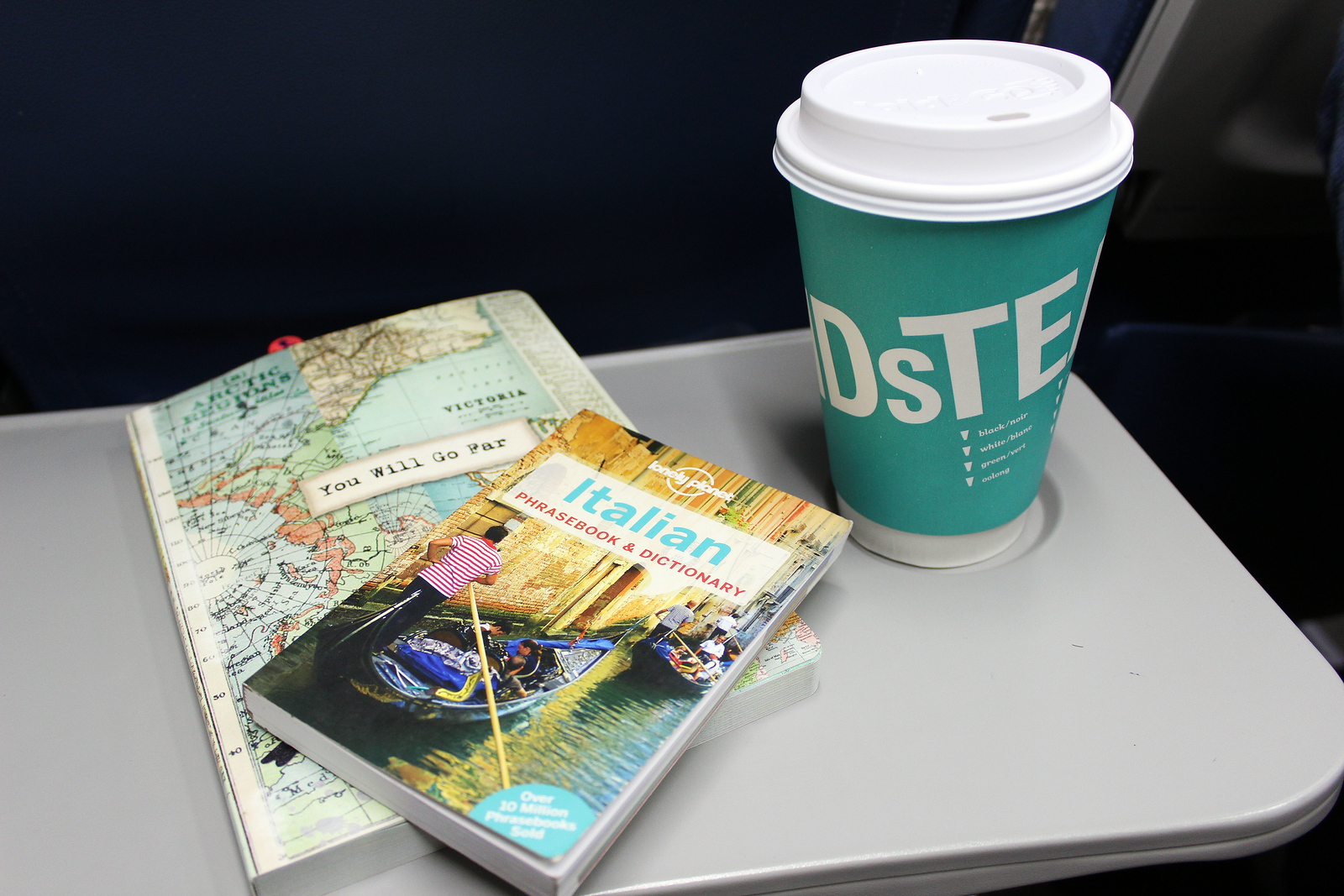 I had a comfortable neck pillow to feel more at ease during the flight. 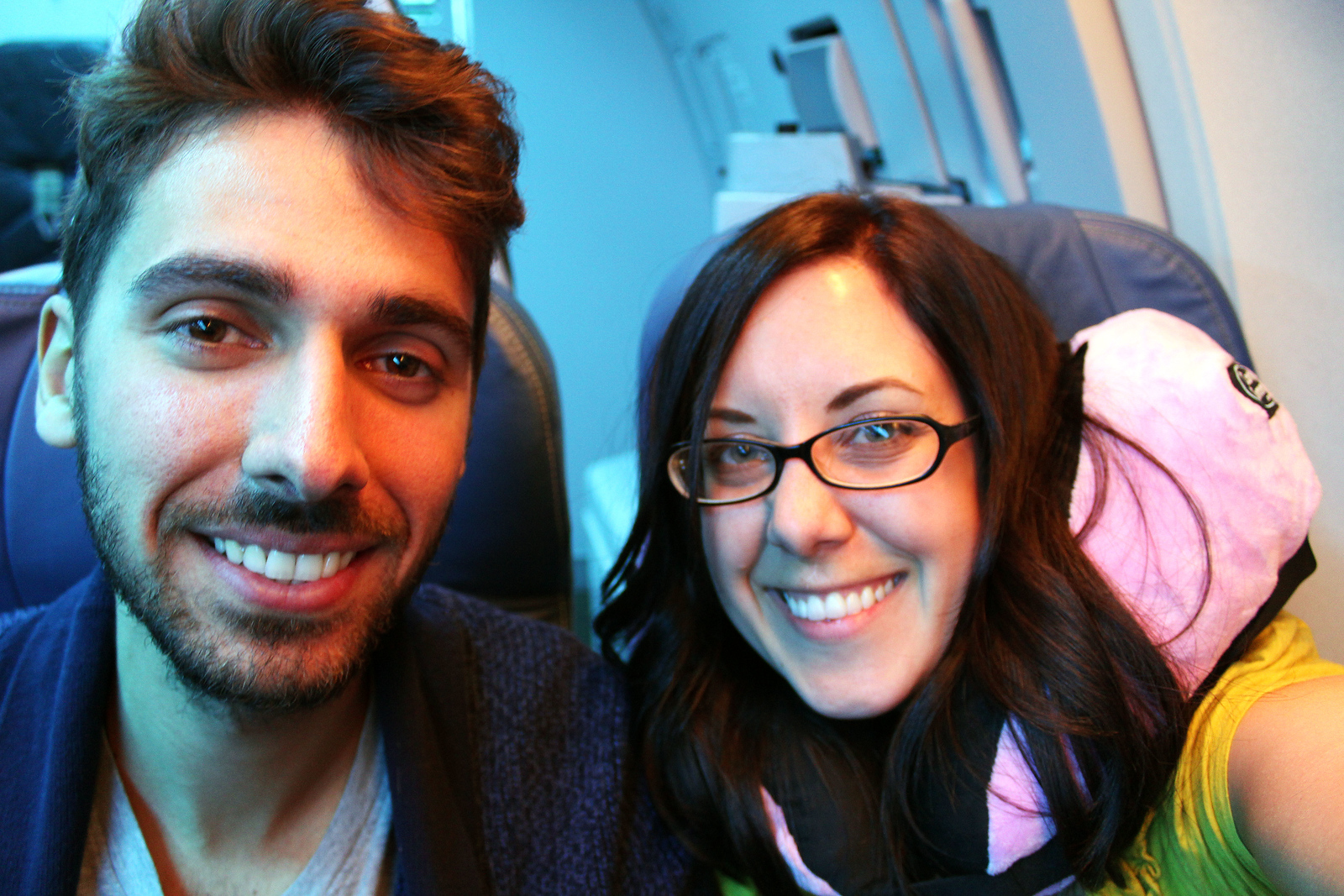 We even decided to drink a small glass of wine. Sometimes wine makes me sleepy, so I figured that could only help, right! 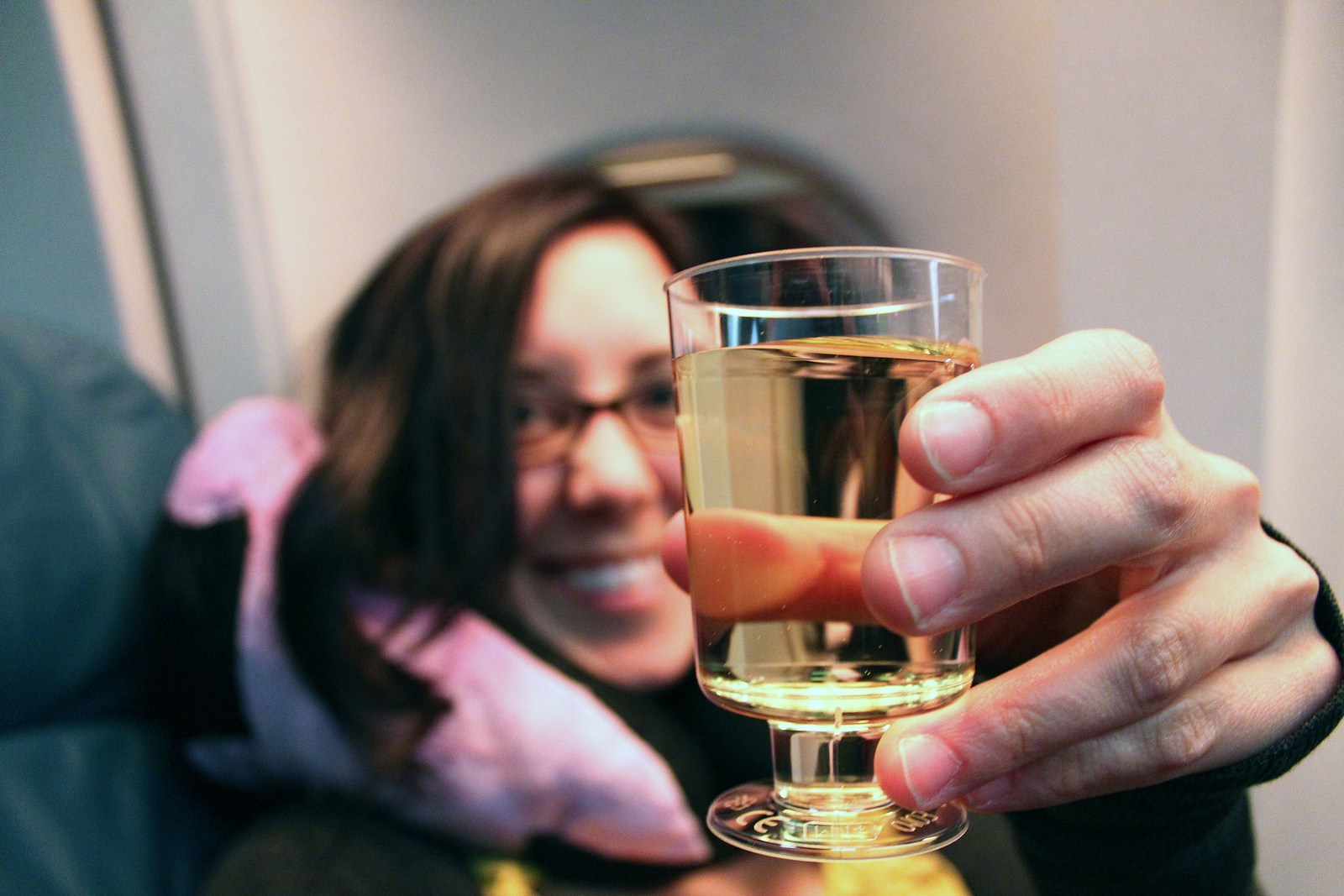 Well, nothing could save us from the dreaded bathroom that was located at the back of the plane. Throughout the night, there were constant line-ups, the sounds of toilets flushing, people tugging at the backs of our chairs, and heavy footsteps back and forth past our seats. The location of the bathroom was one of the elements that made it impossible to sleep. I was also unable to sleep because I was freezing cold during the entire flight to Venice! I should have brought a blanket, or at least purchased one. On the flight home, I actually splurged and bought a blanket for $9 and it was well worth it. I was cozy and warm, and actually managed to get some rest! On the flight to Venice, it was awful because my body felt tired, my eyes felt very tired, and I really could feel myself wanting to sleep…except the noise and movement around my seat kept me awake.

On the way home, our flight from Rome was at 2:00pm and we were arriving in Toronto at 5:45pm, so there really wasn’t any need to sleep. In this case, I didn’t mind these seats at all. It was nice having a little bit of extra leg room, having just the two of us beside one another, having no seats behind us, and all of the other reasons that I listed above. However, if you want to get any rest, don’t choose these seats.

We found the staff on board to be quite pleasant and helpful. Particularly on our flight home, the staff were very friendly and understanding. They always had a positive and upbeat attitude. We didn’t even seem to mind the line-up of people by the bathroom on the flight home, yet the airline stewards were extra apologetic for any inconvenience this may have caused us. They offered us some snacks for free that you normally would have to pay for. It’s the small things sometimes that leave a lasting positive impression.

We were really impressed with the meals on board Air Transat. Of course, we were a little concerned at first because we didn’t know if we could fly Air Transat with vegan meals. We had to call Air Transat in advance and make a special request for our flight meals. The option we chose was “vegetarian without dairy products”. We didn’t know if this would end up being a vegan meal. Would it contain egg or other animal products? We’ve also heard reports of airlines forgetting to bring the special meals on board sometimes. Justin and I brought lots of extra snacks just in case something like this happened. Well, the meals we received were indeed completely vegan, and they were quite yummy!

In both cases, the meals consisted of an entree, a small green salad with balsamic vinaigrette, a little baguette, a glass of water, and a small fruit salad. The entree on our flight to Venice was spiced quinoa and sweet potatoes. On our flight from Rome, our meal was basmati rice with spicy bean masala. Both meals were satisfying and tasty. We were very happy to be able to fly Air Transat with vegan meals. Thank you, Air Transat, for being so vegan-friendly! 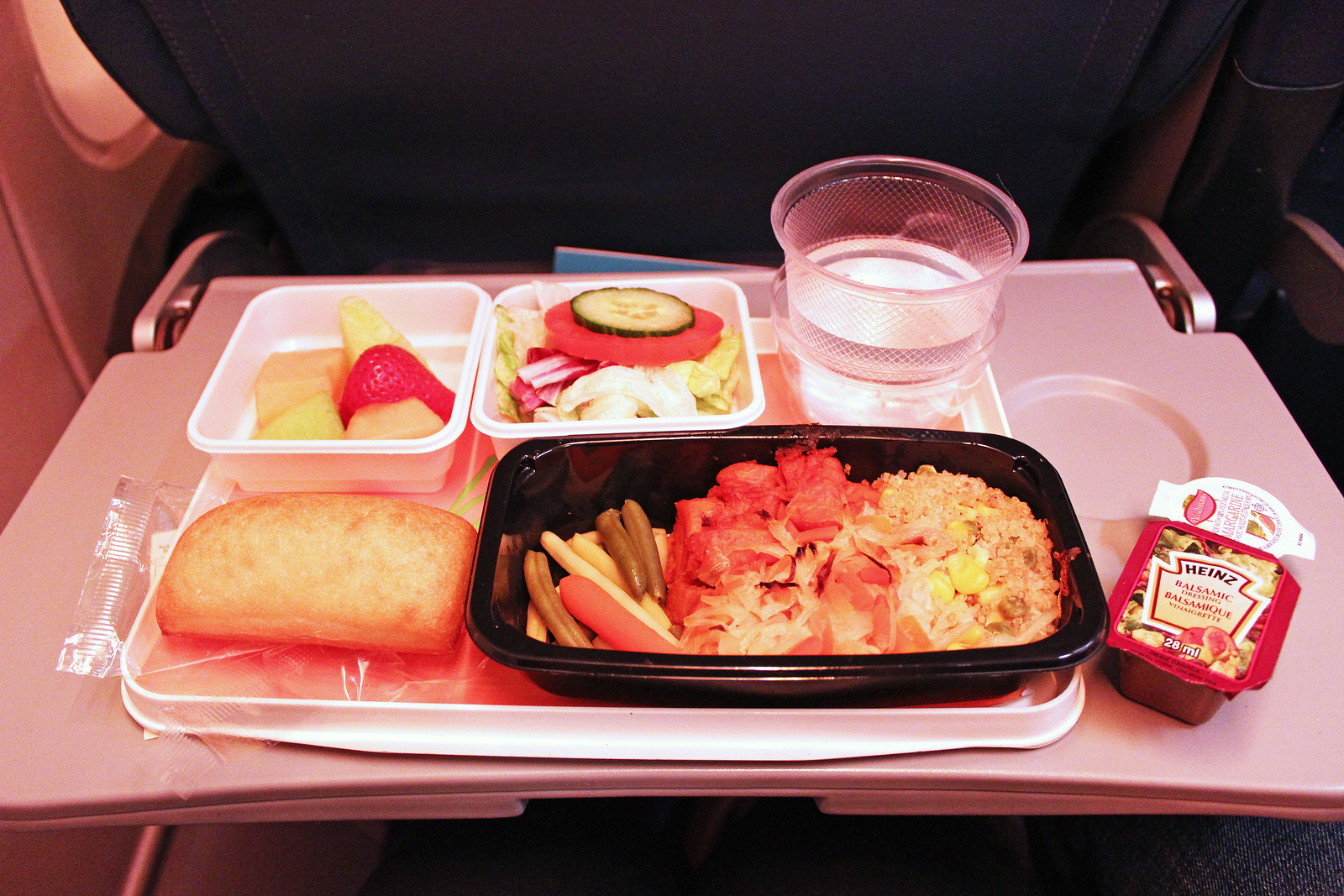 After hours of trying to sleep and being unable, I decided to open my airplane window screen to peer outside. To my surprise, the bright light spilled into the cabin – it seemed like moments ago it was nighttime, and suddenly, it was the middle of the day. Flying across time zones really does mess with your mind! Once my eyes adjusted to the light, I was in awe of the beautiful view as we were flying over the Alps. 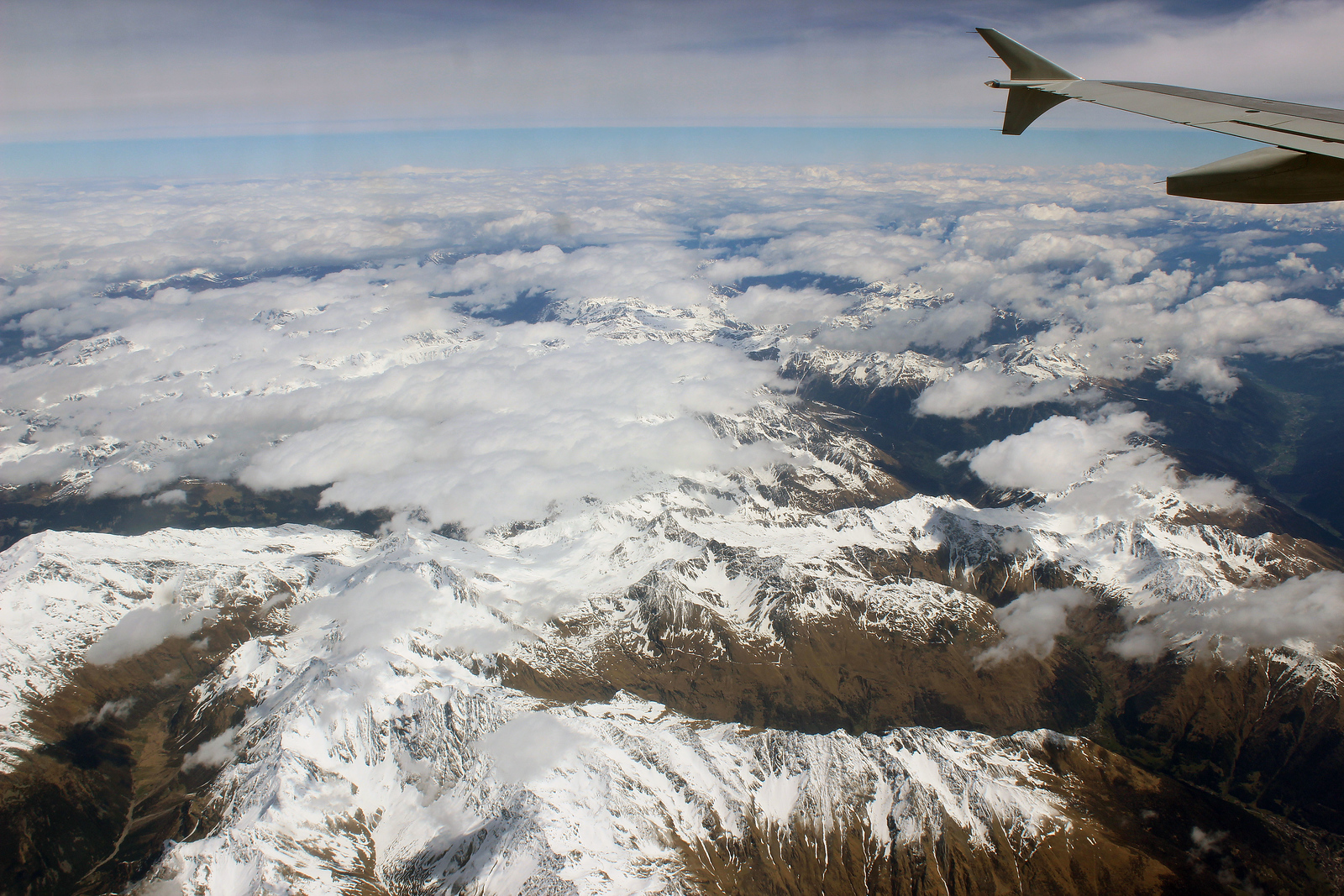 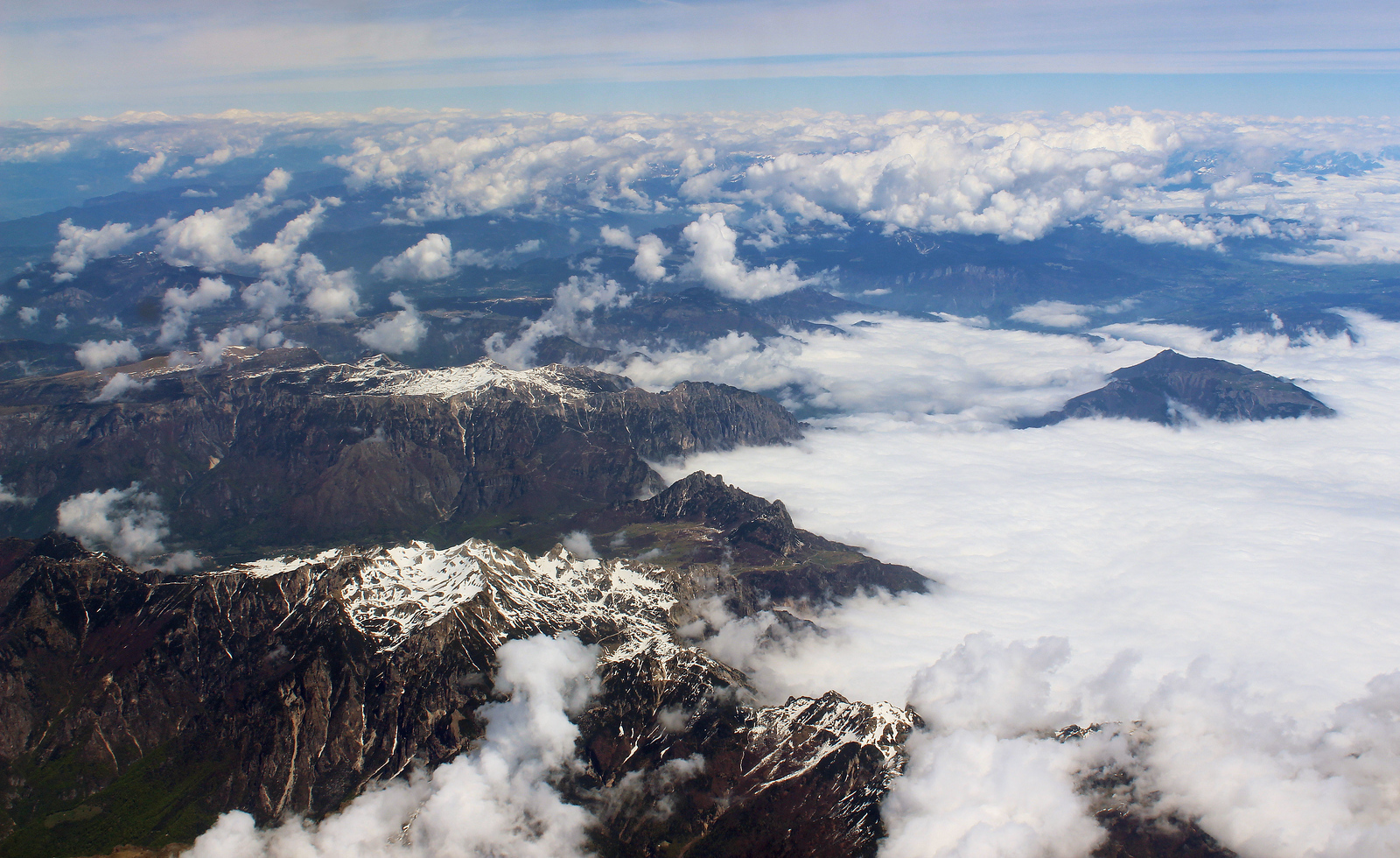 My first glimpses of Venice were far less spectacular. Of course, the scene around the airport isn’t at all what you picture when you think of Venice as it is located outside of the city core. 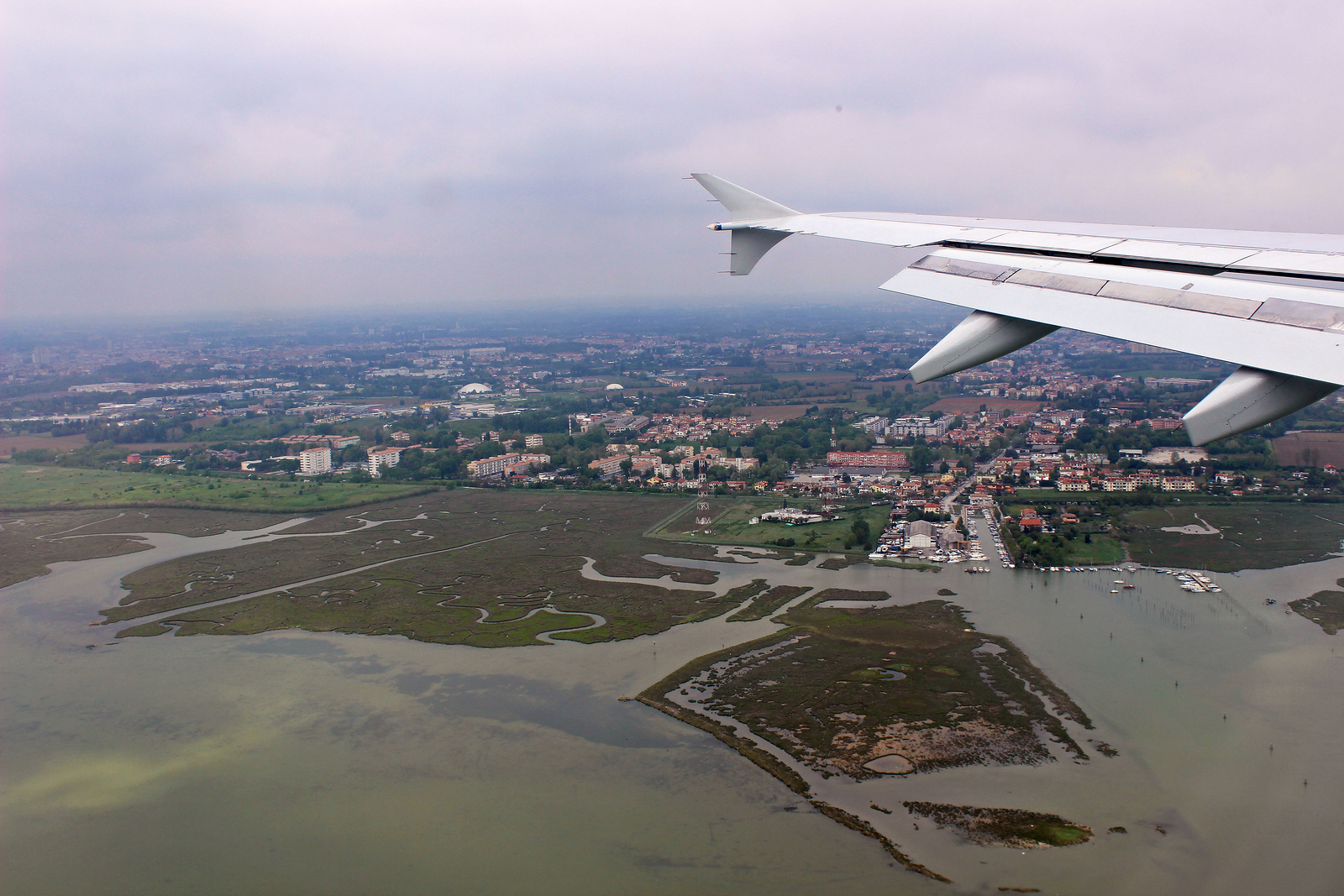 Our plane landed and we were in Venice at last. And this is where the adventures truly begin. 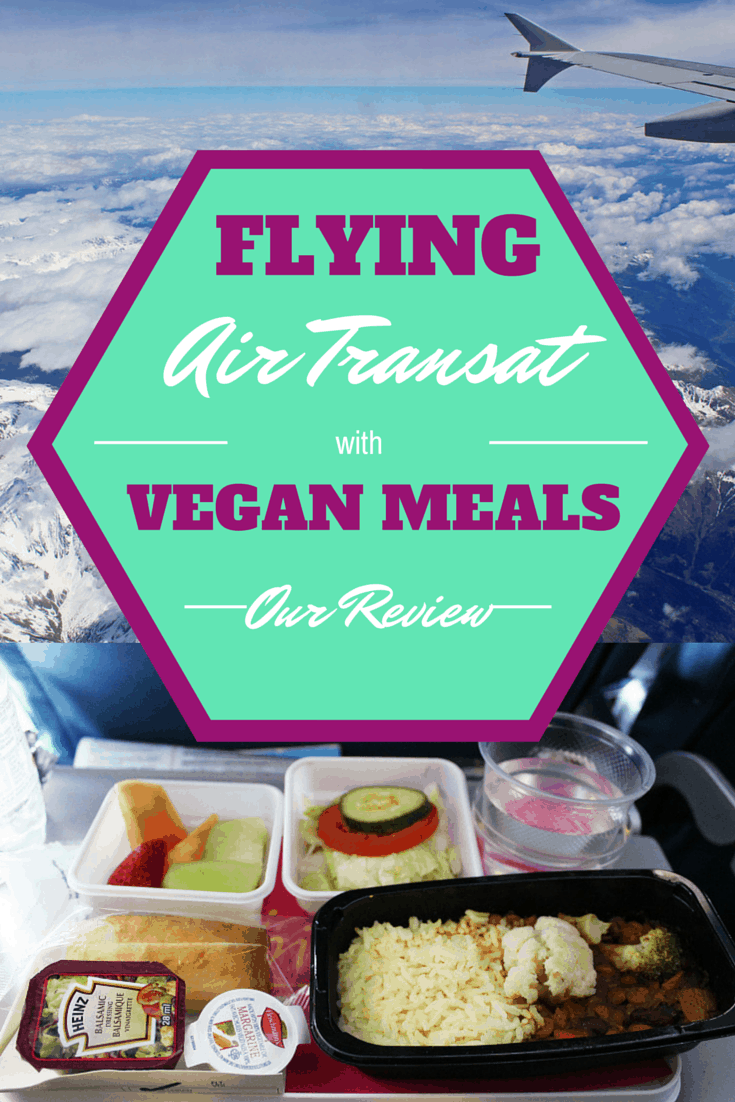 PIN THIS ARTICLE to your Pinterest account by clicking the little button in the top left corner of this image!

Have you ever flown with Air Transat before?

For the vegan meal, did you just go with "VEGETARIAN, WITHOUT DAIRY PRODUCTS" and risk it, or did you explicitly ask for vegan when you called?

Hi Jake. That's exactly what we chose. That's their way of labeling a vegan meal....even though it doesn't specify no animal products, you'll receive a vegan meal if you request that. On the phone, they might not know what it means if you ask "is it vegan?" but in our experiences flying there and back from Italy, "vegetarian without dairy products" = vegan. Hope that helps!

I'm just back from Venice and it is such fun to read about it from another persons view! I'll be reading all your posts!

You did have a sad view flying in ... my view was a gorgeous shot of St Marks Square! I was surprised to be able to see it when coming in for a landing!

OMG we love plane meals! And we love how easy it is now to get vegan food on airplanes, we think most airlines have that option, right? It's nice when you're travelling in a country where it's hard to find vegan food, then you get on a plane and...well, you can finally eat. Great post and nice photos! Good to see other vegans travel. Happy travels :)

This looks very tasty I have to say. A couple of months ago I flew to South America and somehow they got me a vegan meal (I'm not a vegan). Which turned out to be dry rice and beans plus a tasteless roll of bread so needless to say I wasn't too happy, but Air Transat seems to do a much better deal. I flew with them to Canada a couple of years ago and really enjoyed the flight!

That sounds awful! I wonder how you ended up with a vegan meal...so strange! Thankfully, our meals were far from gross or tasteless! :)

Well I think you make me want to go and take a flight - you have great photography and reading this made me hungry. Venice from the air - awesome!

Thanks so much, Ruth!! While flights can be really tiring and uncomfortable, we definitely made the best of it here. I wouldn't hesitate to board a plane right now if it meant going somewhere as awesome as Italy :)