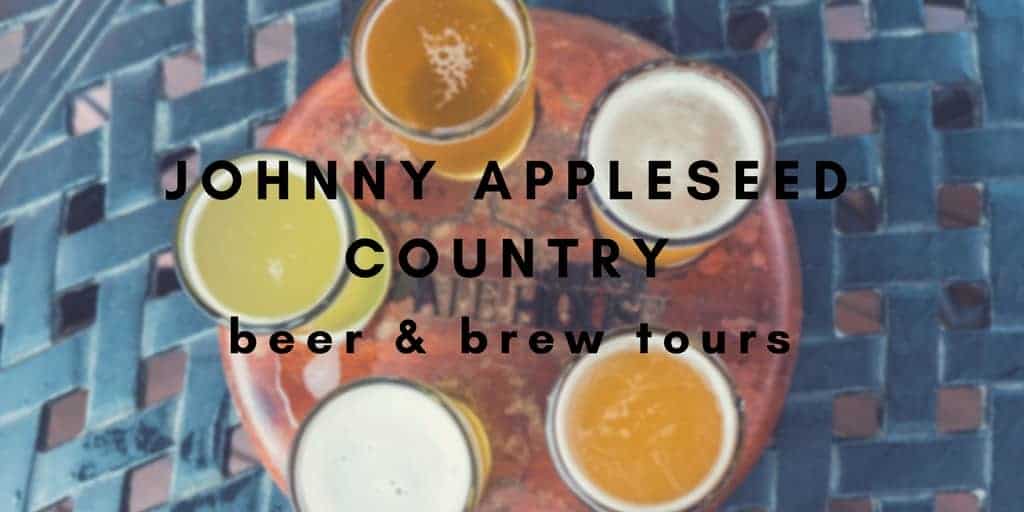 Johnny Appleseed Country is a destination in North Central Massachusetts that you might not have heard of, but you need to plan your trip there if you’re a fan of beer. There are three distinct breweries in this region where you’ll find refreshing pints and flavourful brews. Take a trip between three towns to discover their breweries and brew pubs. And if you’re like me, you’ll want to bring some home with you, too! 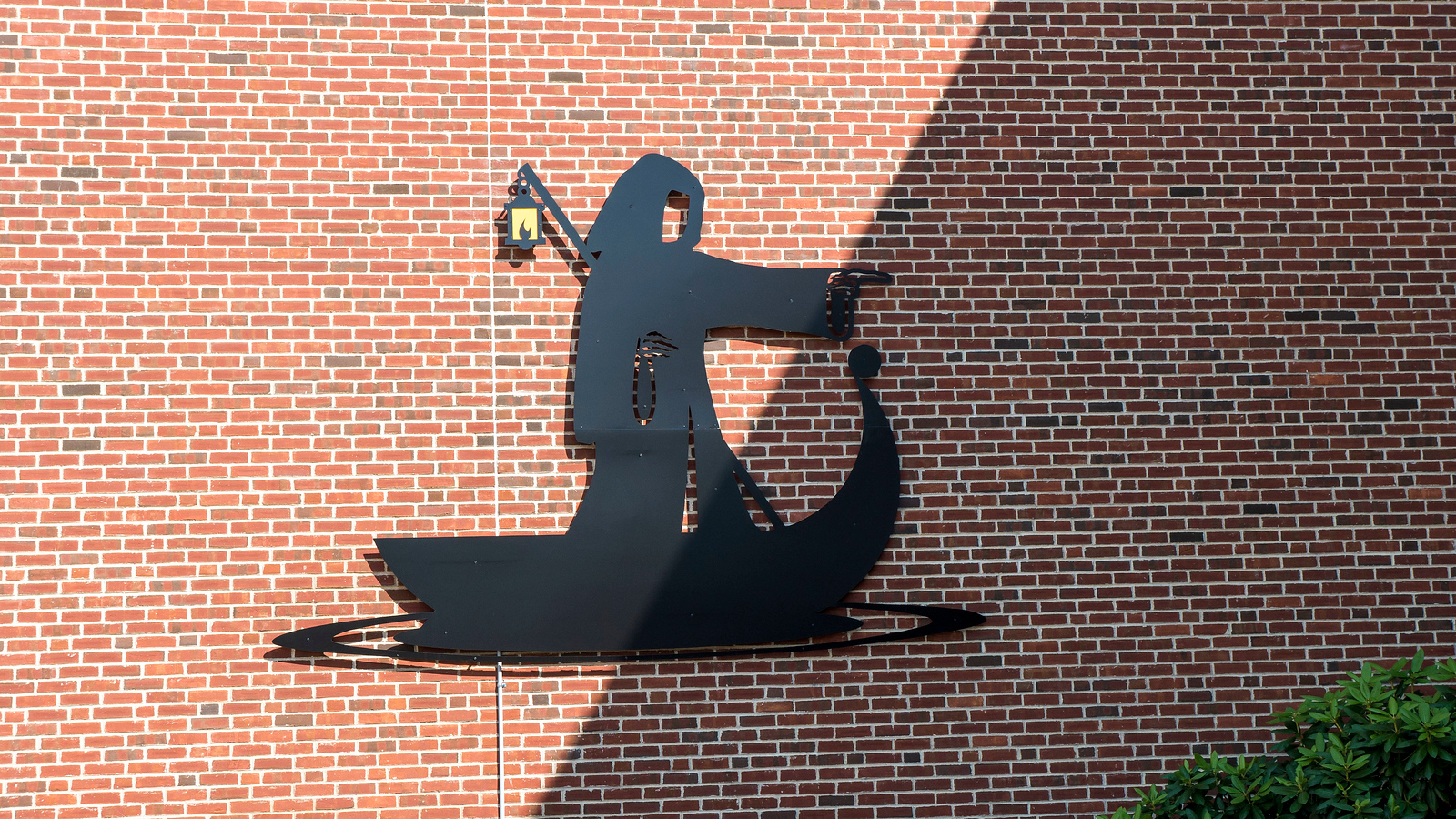 Although only opened since the summer of 2017, owners Scott and Jackie Cullen began brewing at home about 10 years ago. After deciding to call their brewery, “River Styx Brewing,” it only seemed fitting to use names from Greek mythology for their beer. They’ve created twelve different brews named after Greek gods and goddesses. Scott’s recipes are named after gods, and Jackie’s recipes named after goddesses.

The taproom itself has an underworld vibe. Once you step inside, you feel as though you’ve stepped into another world. The walls and furniture are black, and the lighting is dim. The walls are covered with massive murals depicting the River Styx, along with ghostly figures enjoying drinks at the bar. 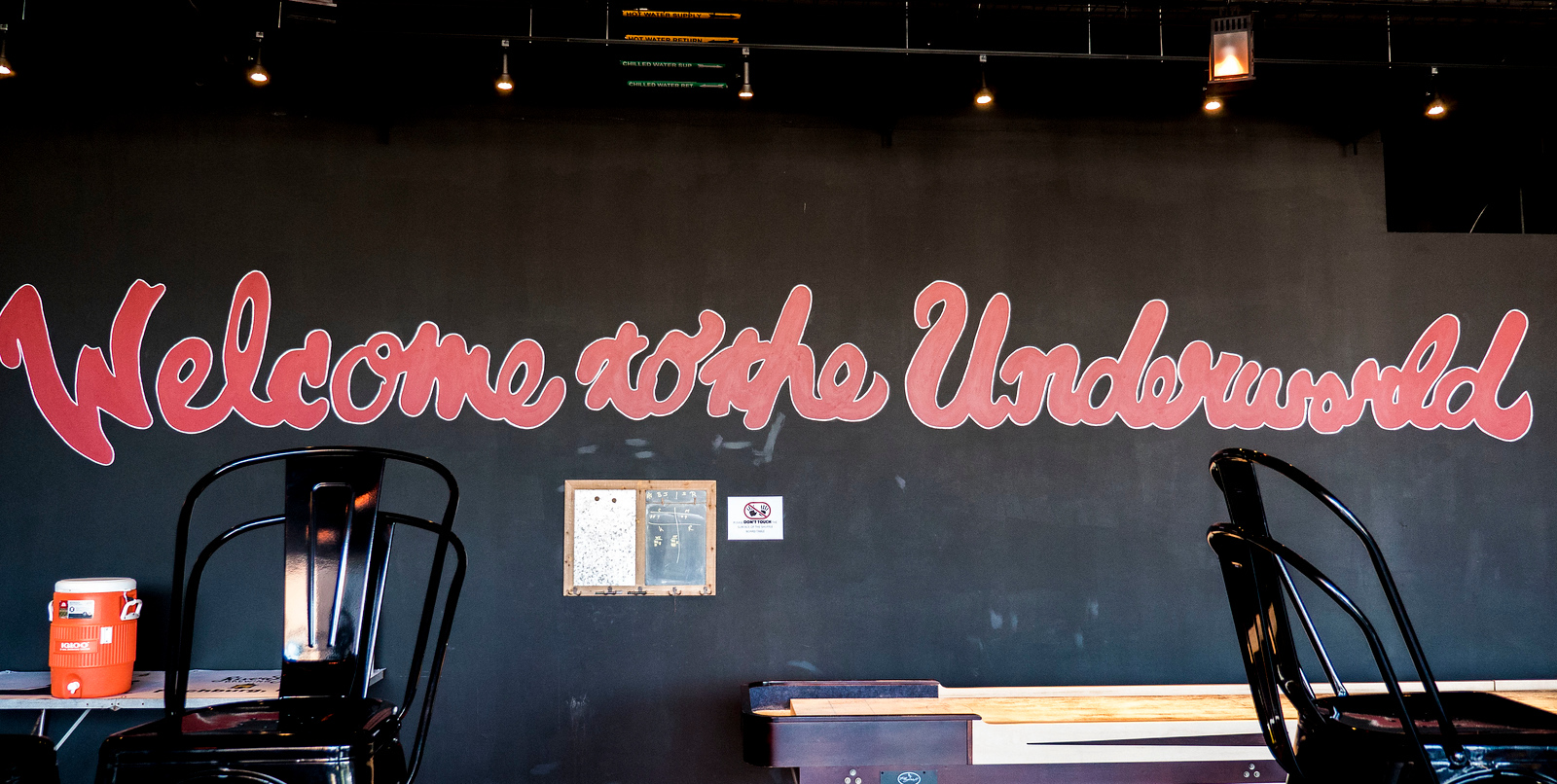 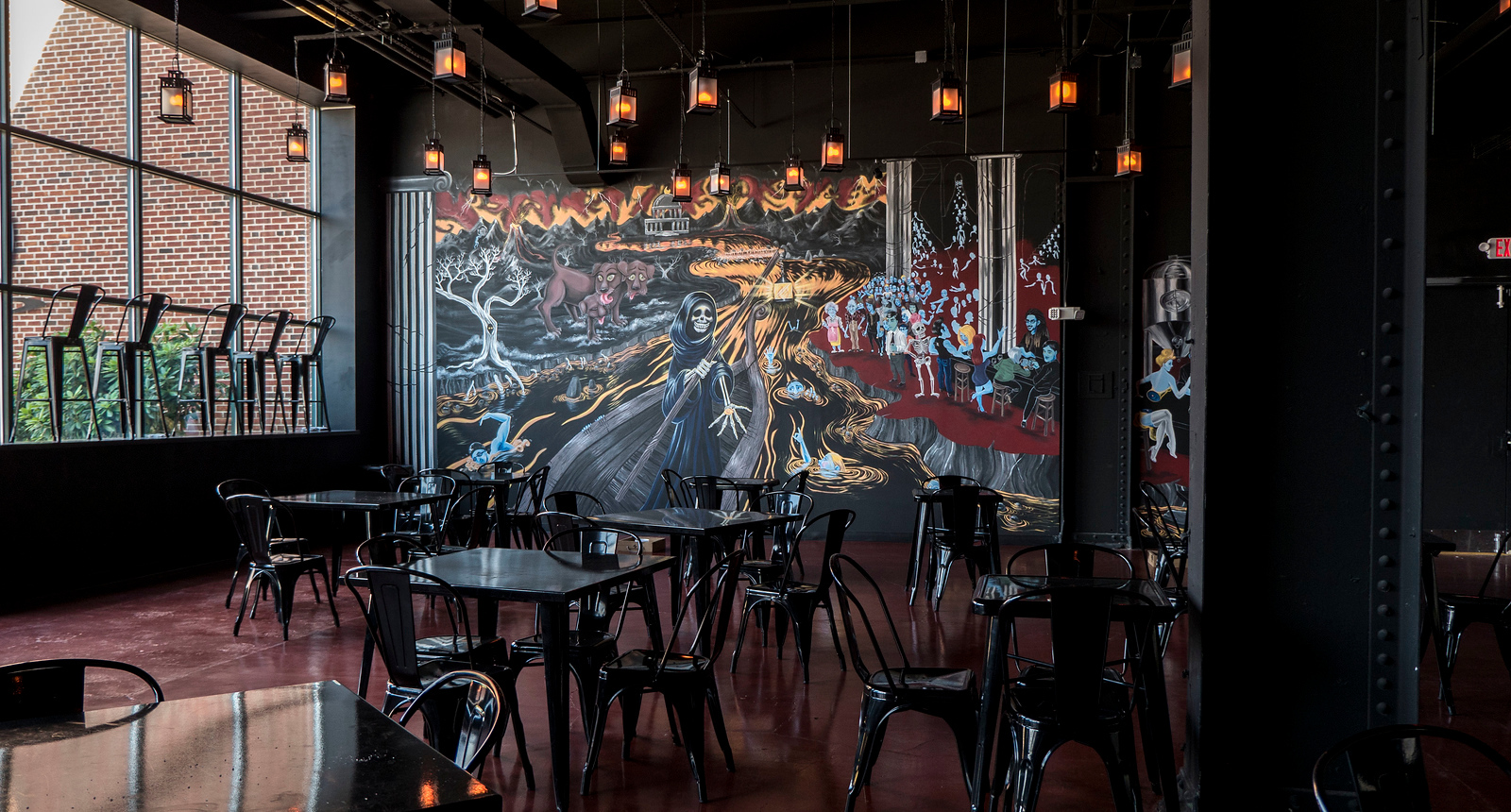 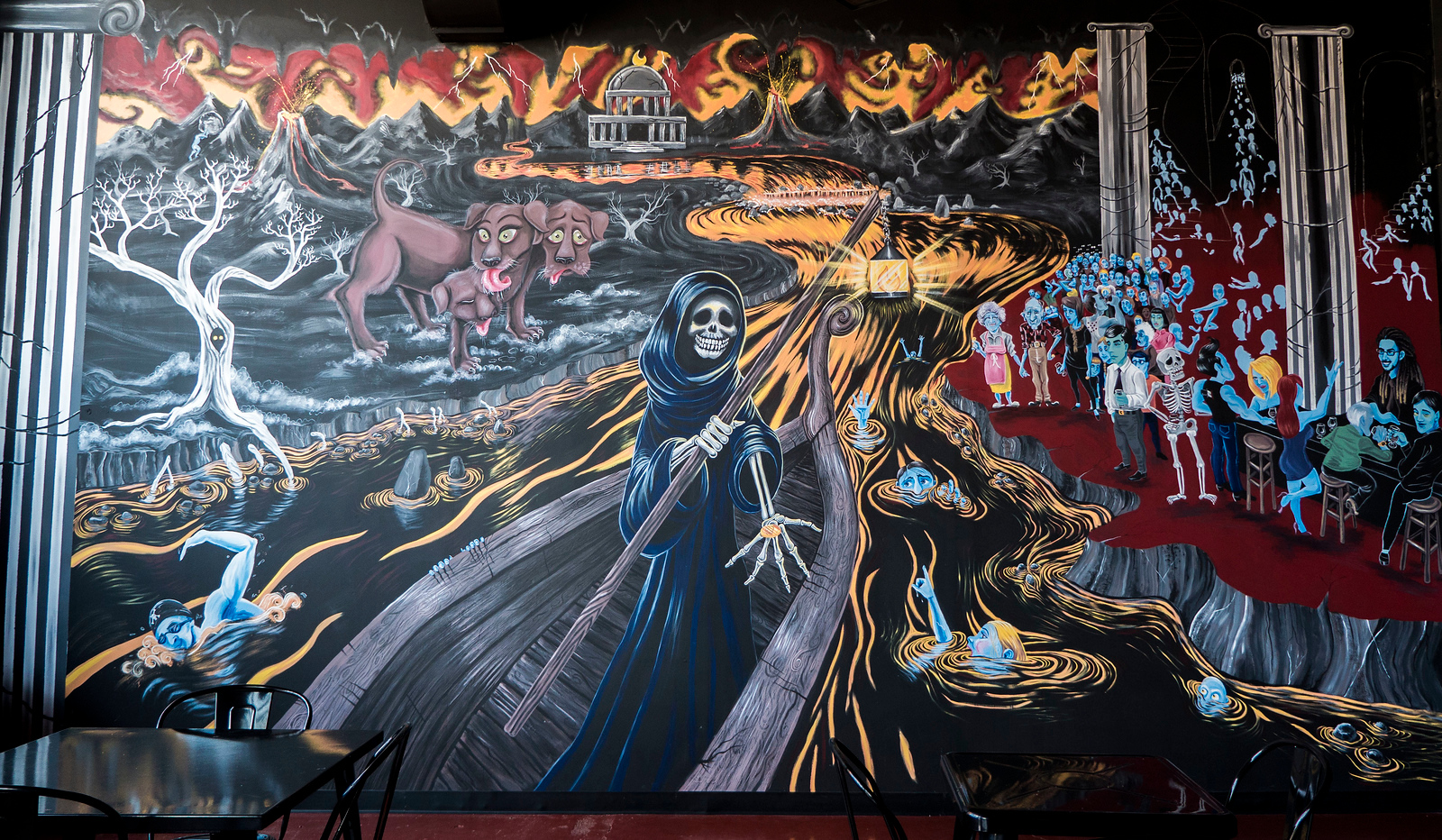 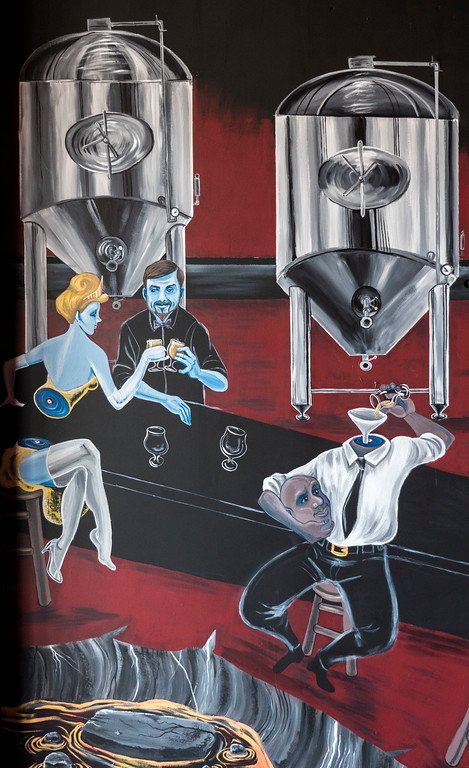 My road trip buddy, Lindsay and I split a beer flight that included every single one of their ales. My personal favourite was “Apollo’s Arrow” (Son of Zeus – a well balanced, approachable IPA). For a full listing, check out the River Styx Brewing website.

Next to the taproom, the magic happens. As the brewery is brand new, their equipment incorporates the latest technology to help create delicious beer. Back at the bar, River Styx even has a mobile canner so you can take their beer home with you.

River Styx supports local businesses by carrying some of their products, like Wicked Twisted pretzels and Deep River Chips. They’re planning to have food trucks visit their brewery. For now, River Styx is a “BYOF” establishment (bring your own food). Feel free to bring your dinner and dine there, if you’re the type that likes to pair your meal with a pint (yes, please!).

Next, we’ll travel to the Westminster, MA for a larger scale operation, Wachusett Brewing Company. Wachusett was established in 1994 by three college buddies who loved making and drinking beer. Over 20 years later, this brewery is one of the largest in the Northeast.

You’ll find an extensive variety of beers at Wachusett Brewing Company, including year round favourites and limited seasonal additions. I immediately fell for their blueberry ale, which also happens to be one of their most popular beers. Here’s a full listing for you to browse. 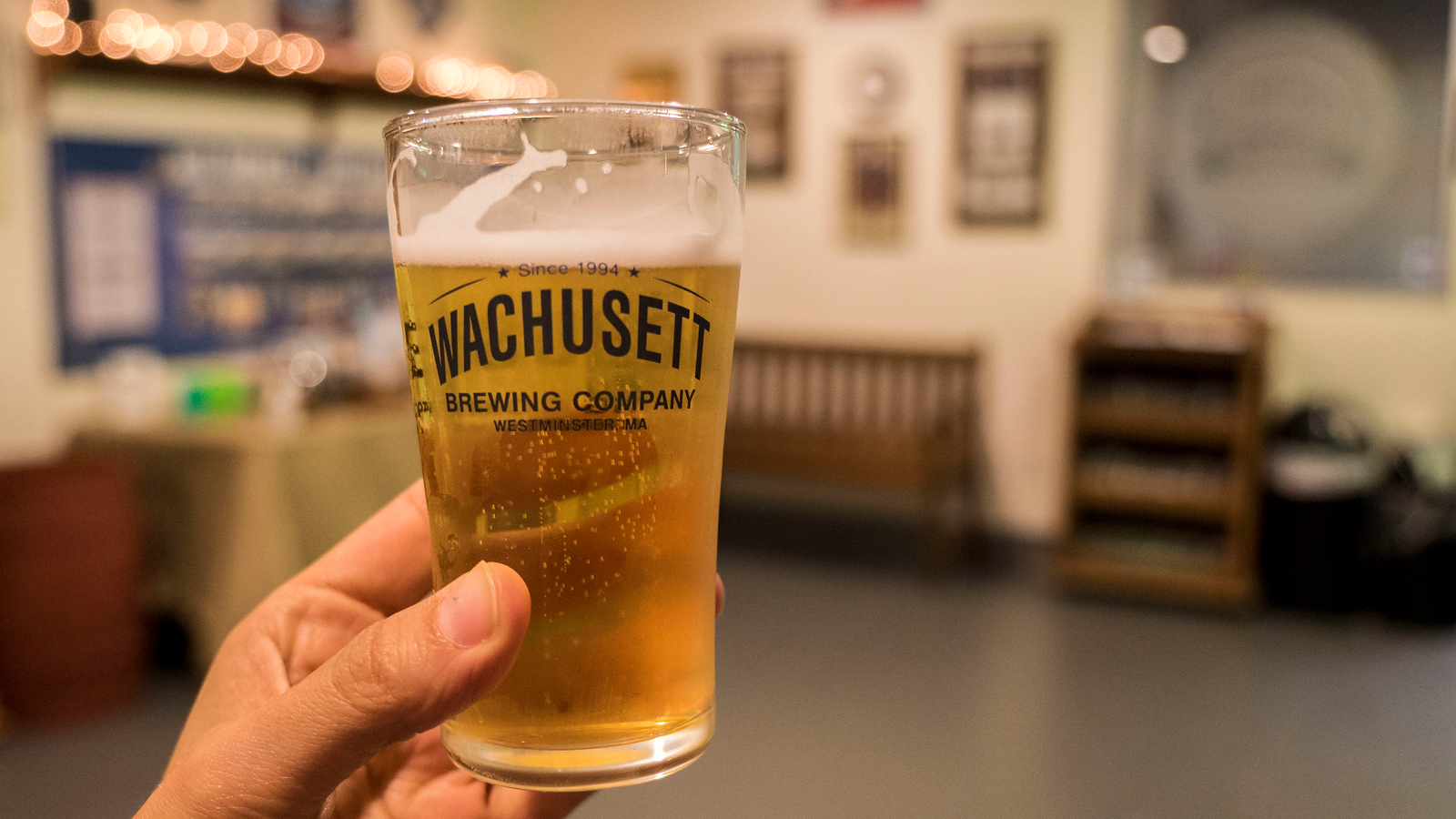 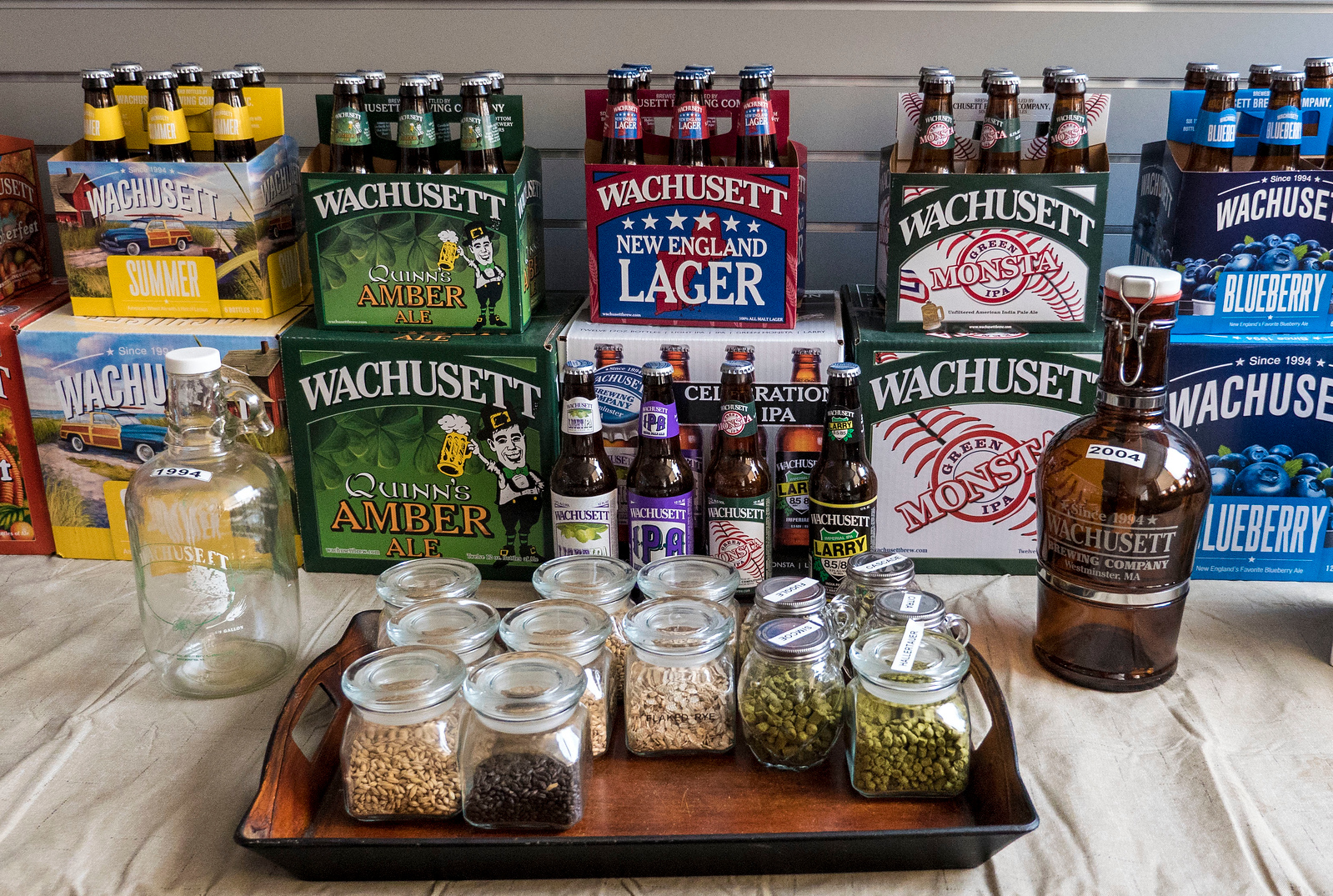 Our brewery tour at Wachusett Brewing Company was light-hearted and fun, without getting too bogged down in the specific science of making beer. There was a separate room for testing impurities and the taste of the beer, which looked more like a science lab than anything else. It was also exciting to watch the beer cans roll down the production line, travelling through various machinery to become packaged and ready to ship.

This operation was much larger than many craft breweries I’ve visited in the past. Wachusett Brewing Company sells beer all over New England.

The brewery features their “brew yard” where they hold special events, including live music concerts. There’s even a custom Airstream trailer, affectionately named Wally, with a wrap around bar and stools made from kegs. Wally also happens to be the name of one of their beers, a New England style IPA. 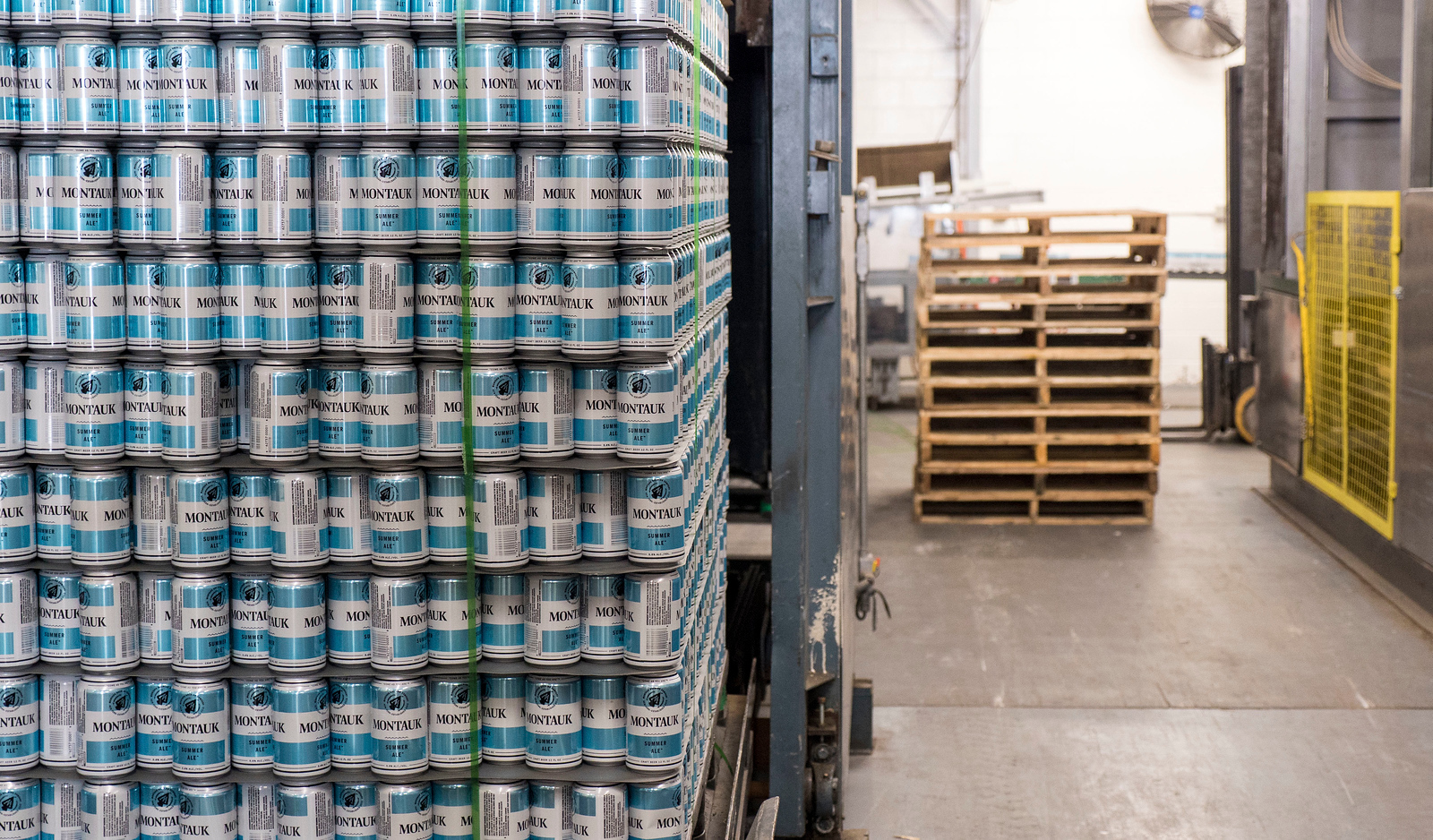 If you aren’t able to make it out to the brewery, you can find the nearest bars and retail stores where Wachusett Brewing Company beer is sold.

The Gardner Ale House in Gardner, MA is a restaurant and brewpub. Their beer, made by Moon Hill Brewing Company, is brewed right on site. We ordered beer flights so we could sample five different ales. While I really loved all of them, the Summer’s End (Kolsch) really stood out, as well as the Moonbat (Saison / Farmhouse Ale). 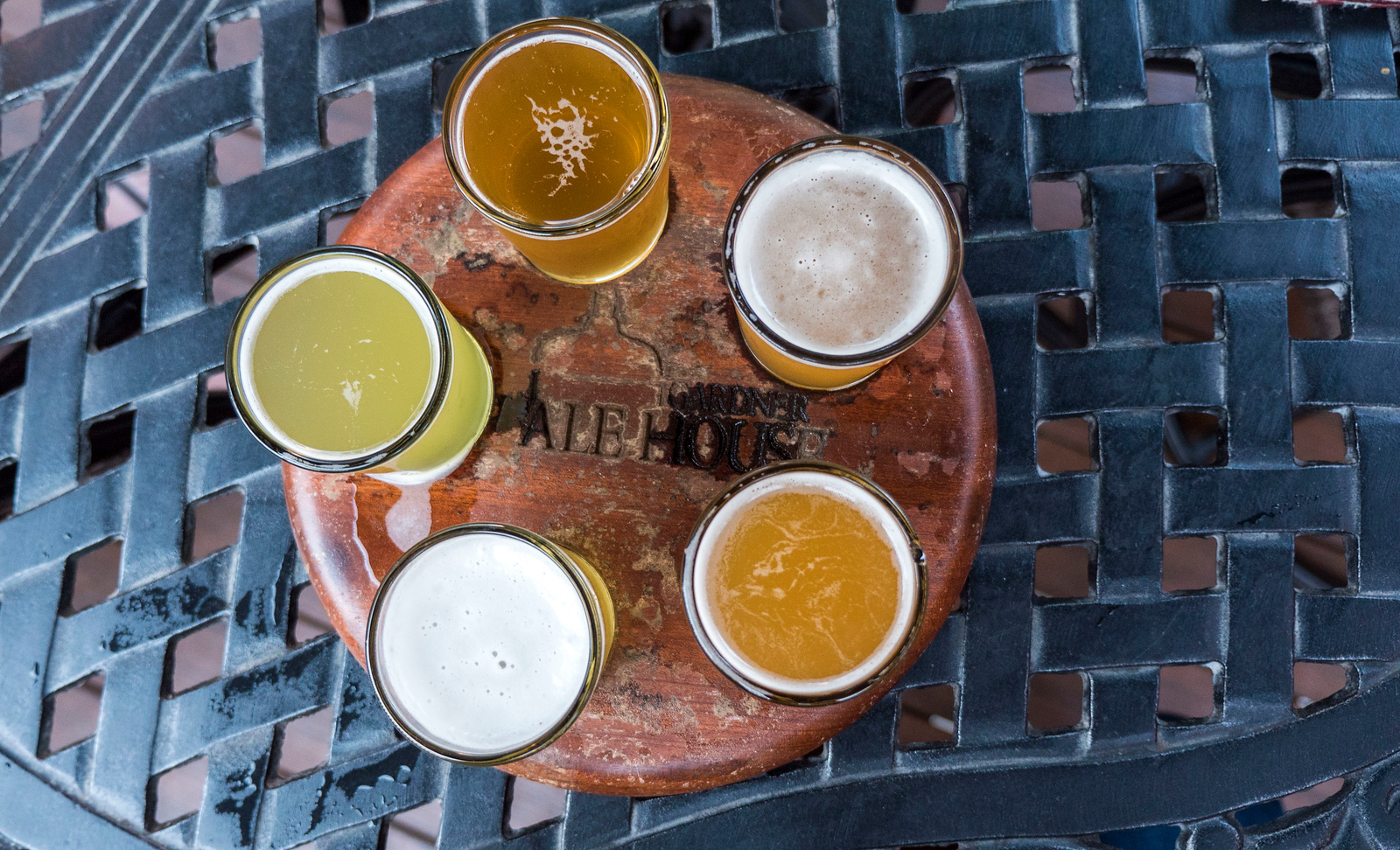 Be sure to try the food while you’re here, too. They’ve got a great patio out back. Gardner Ale House is vegetarian and vegan-friendly. While there aren’t a ton of vegan choices on the menu, our server was so helpful to arrange a vegan meal that I would enjoy. I ordered a hummus and vegetable wrap that was delicious, as well as some tortilla chips and various toppings to snack on.

Apparently there’s a regular customer who also happens to be vegan, and he always orders this hummus wrap. When our server mentioned this, I decided to give it a try. Thank you to the random person who always orders this menu item – I thoroughly enjoyed it, too! 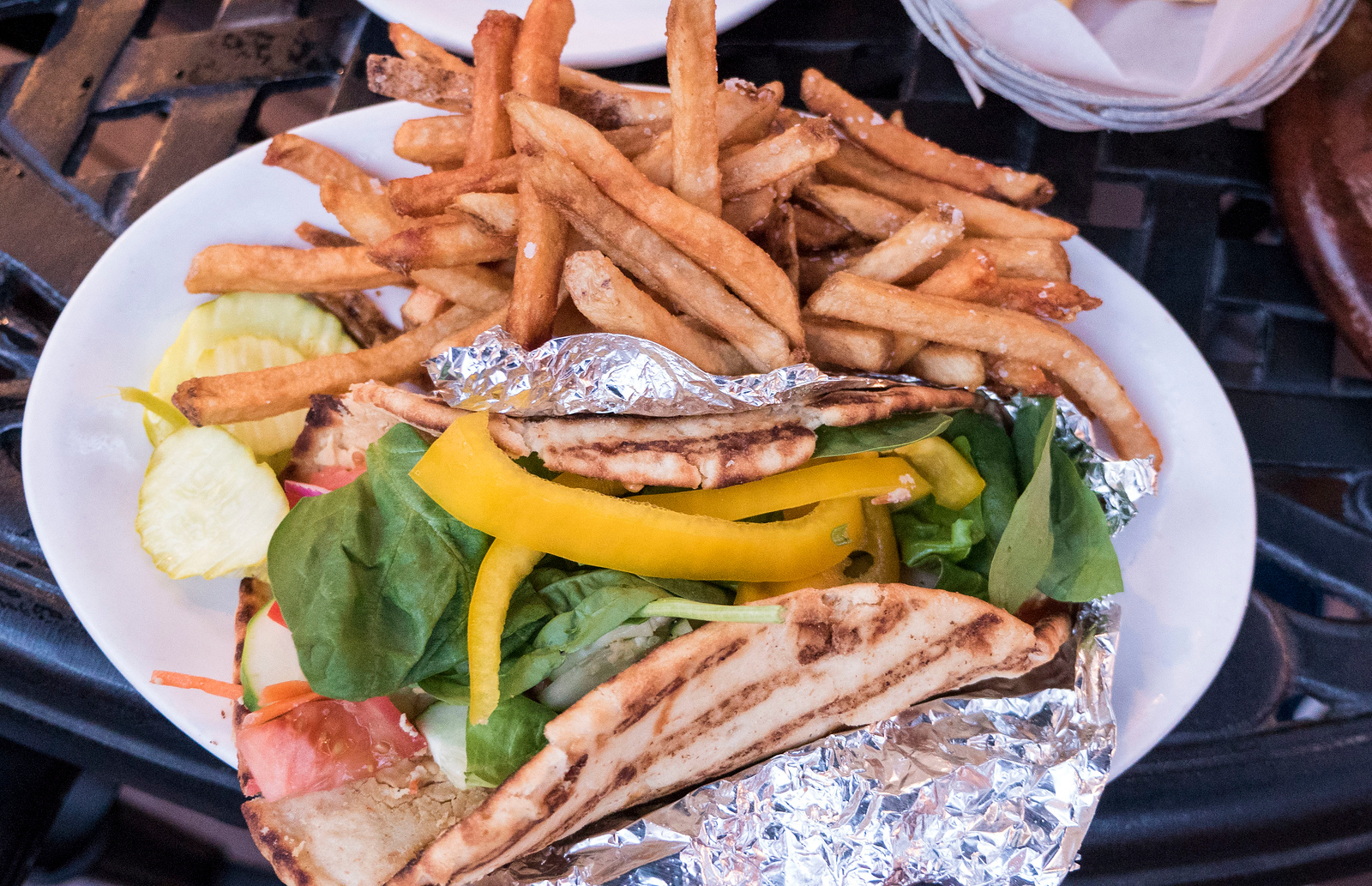 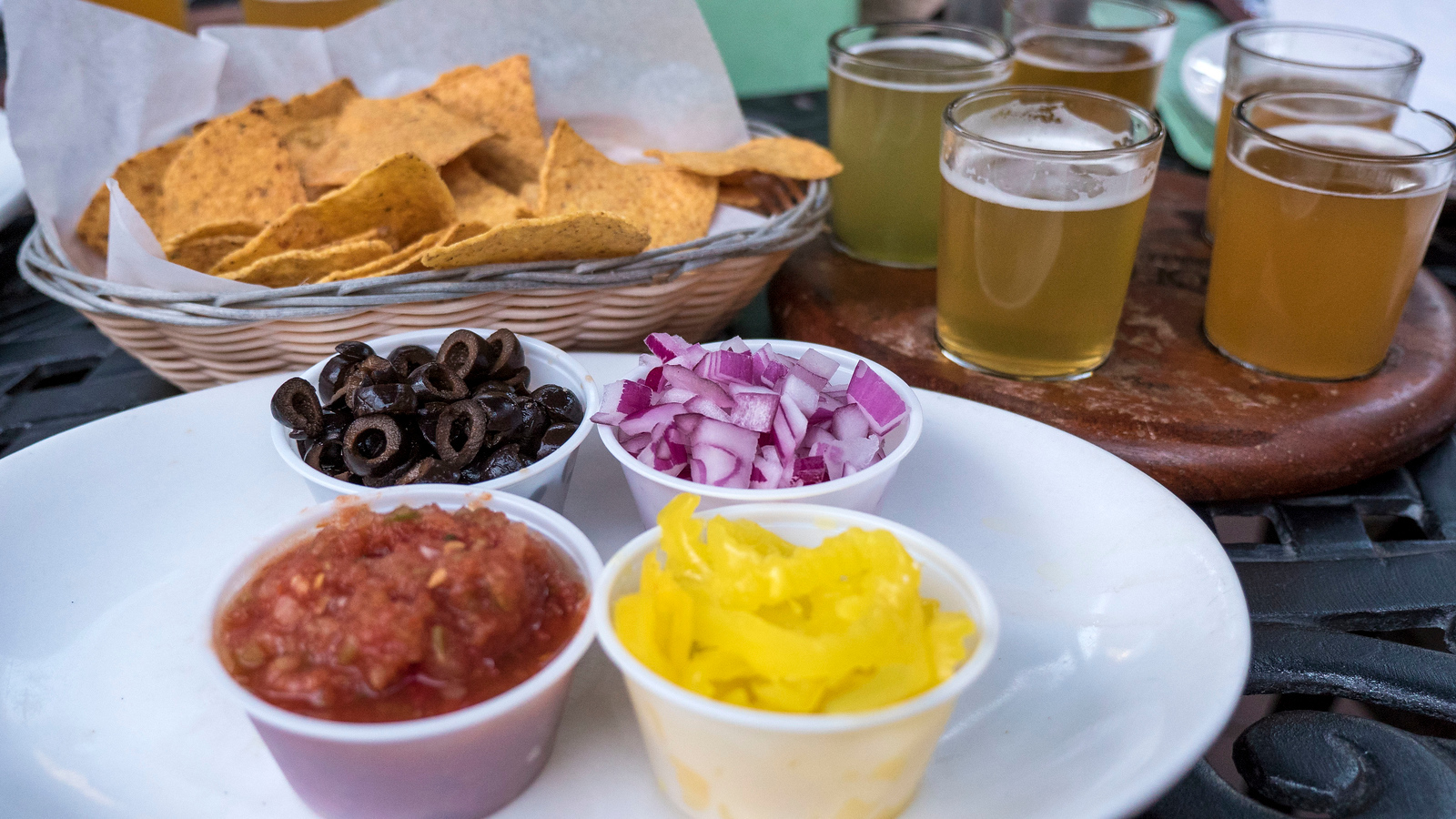 After our meal and beer tasting, we went on a little tour of Moon Hill Brewing Company. We ventured down into the basement of the restaurant to find brew tanks and kegs of beer. It’s supposedly haunted down there, so don’t say that I didn’t warn you! 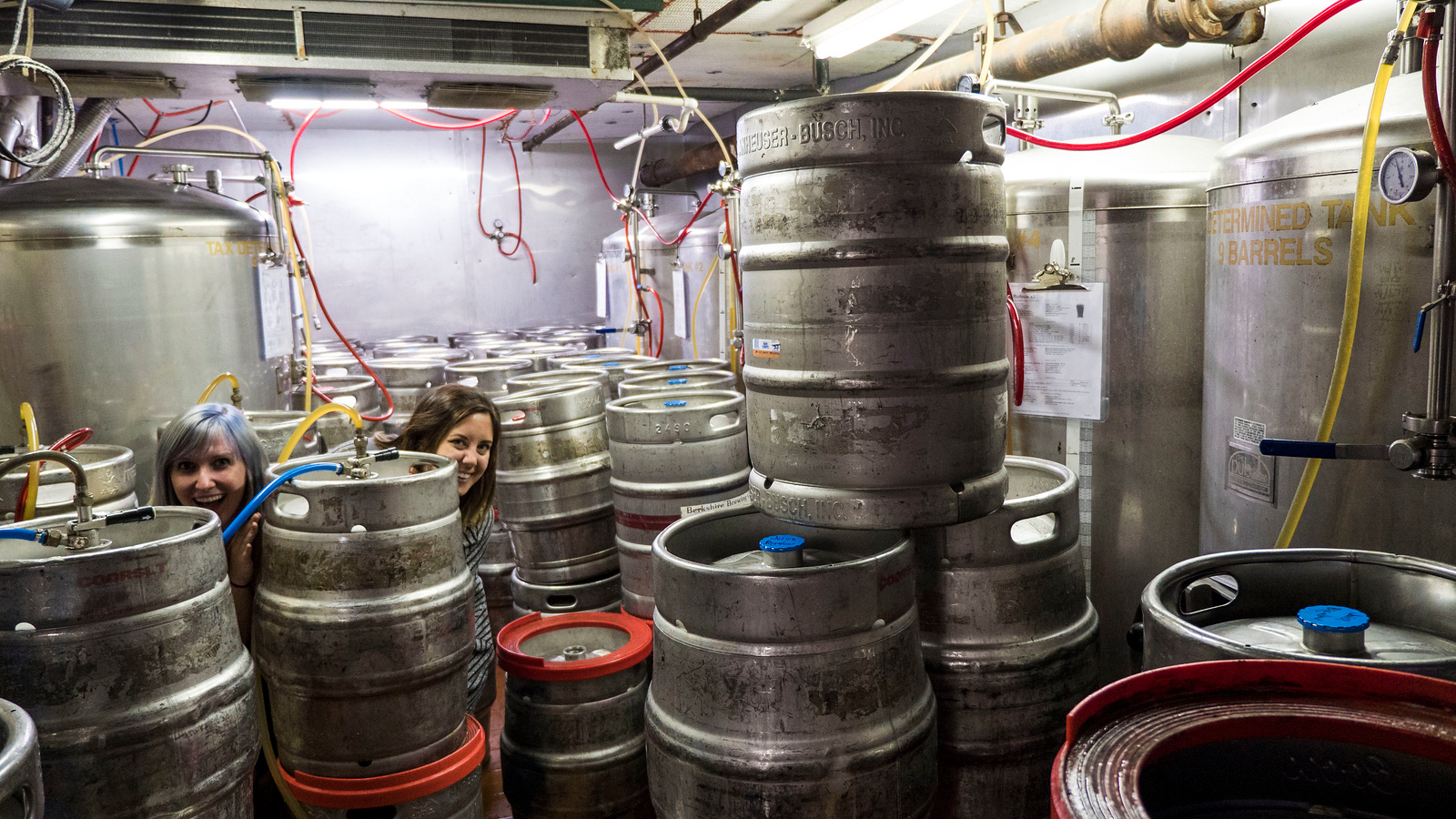 Between River Styx Brewing, Wachusett Brewing Company, and Gardner Ale House’s Moon Hill Brewing Company, you have three different beer experiences in Johnny Appleseed Country. From favourite craft ales to seasonal brews, the spirit of microbrewing is alive, well, and expanding in North Central Massachusetts. You’ll just have to sample this local beer for yourself! 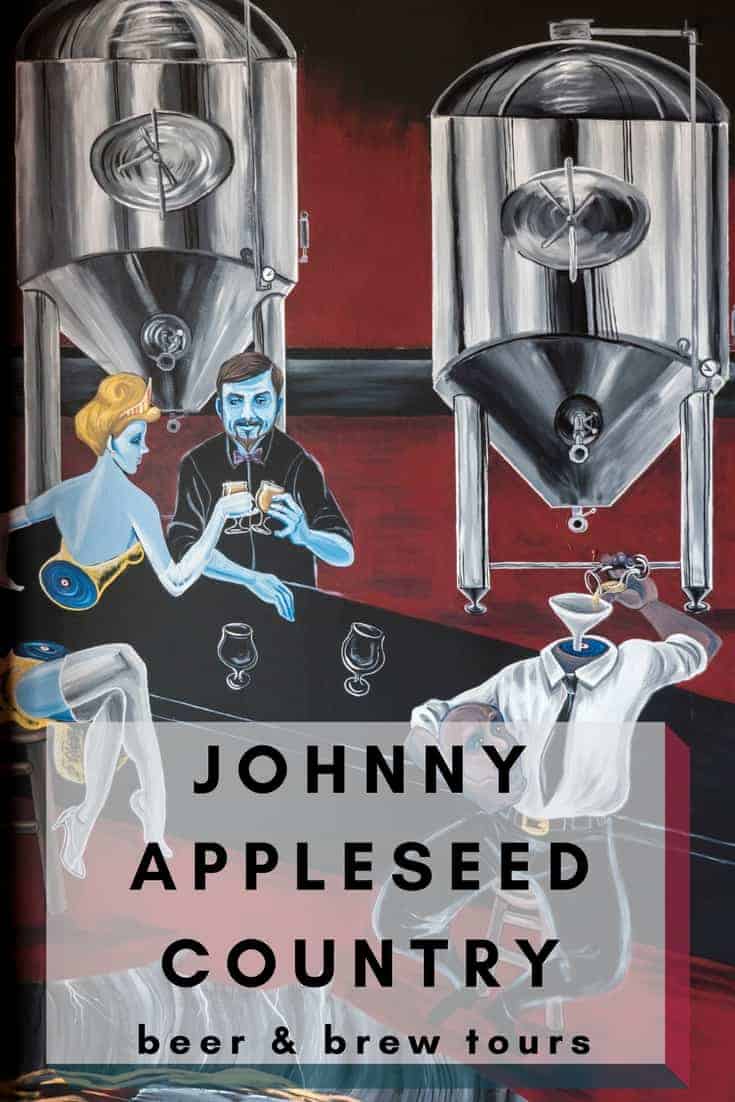 Thank you so much to Johnny Appleseed Country for hosting my stay. A special thank you to all three breweries for letting us sample your beer and touring us around your establishments. My opinions, as always, are entirely my own.

This blog is too good. Amazing work you did. I really liked it. Thanks for sharing this with us.

I like how they allow you to bring your own food while having a pint or two.

Looks really cool. Thank you for sharing this. Just want to know, aside from beers what liquor is your go-to drink?

Those photos up top look creepy, and neat, at the same time. Definitely some intense stuff.

As for New England beer, I am hardly the drinker but do appreciate some good suds once in a while. A friend of mine visited a few breweries in New Hampshire recently and brought back some amazingly tasty beers for us.

BAHAHA oh my I look SO creepy in that keg photo! That trip was so much fun! We need another one soon :)