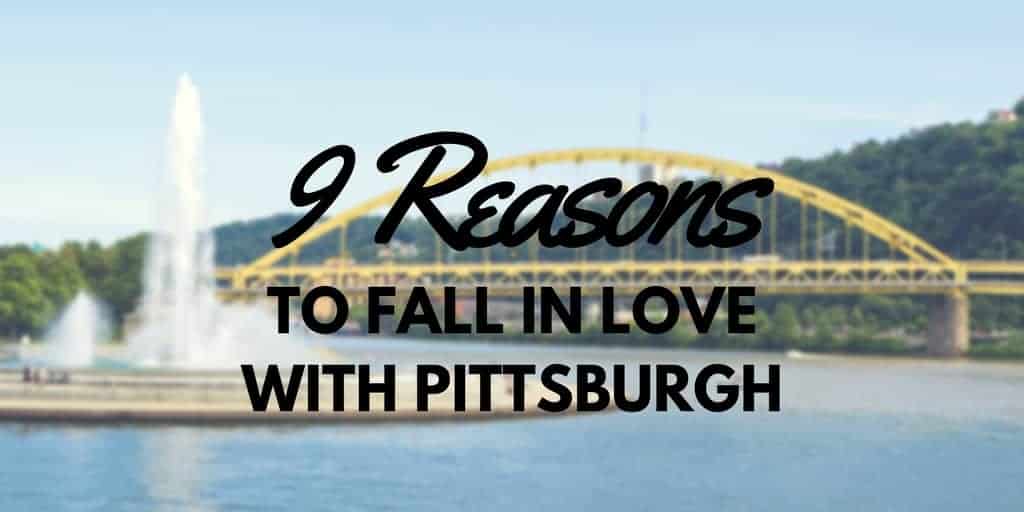 After only visiting the city for a short time, I could tell there were many reasons to fall in love with Pittsburgh.

Pittsburgh, I wasn’t expecting to fall for you.

A former steel manufacturing city, Pittsburgh was just as much the “Steel City” as the “Smoky City,” named for the dense smog that permeated the streets.

However, Pittsburgh is continually reinventing itself following the collapse of the steel industry. It’s atop the list of world’s most livable cities and recently, the top 100 places to live in the USA. There are many reasons to fall in love with Pittsburgh, many of which I discovered only after visiting the city for a few days.

From the food and drink scene to the city’s endearing quirks, my trip to Pittsburgh really left me wanting more. Here are my favourite things about this “City of Bridges”. (Pittsburgh has a lot of nicknames!) 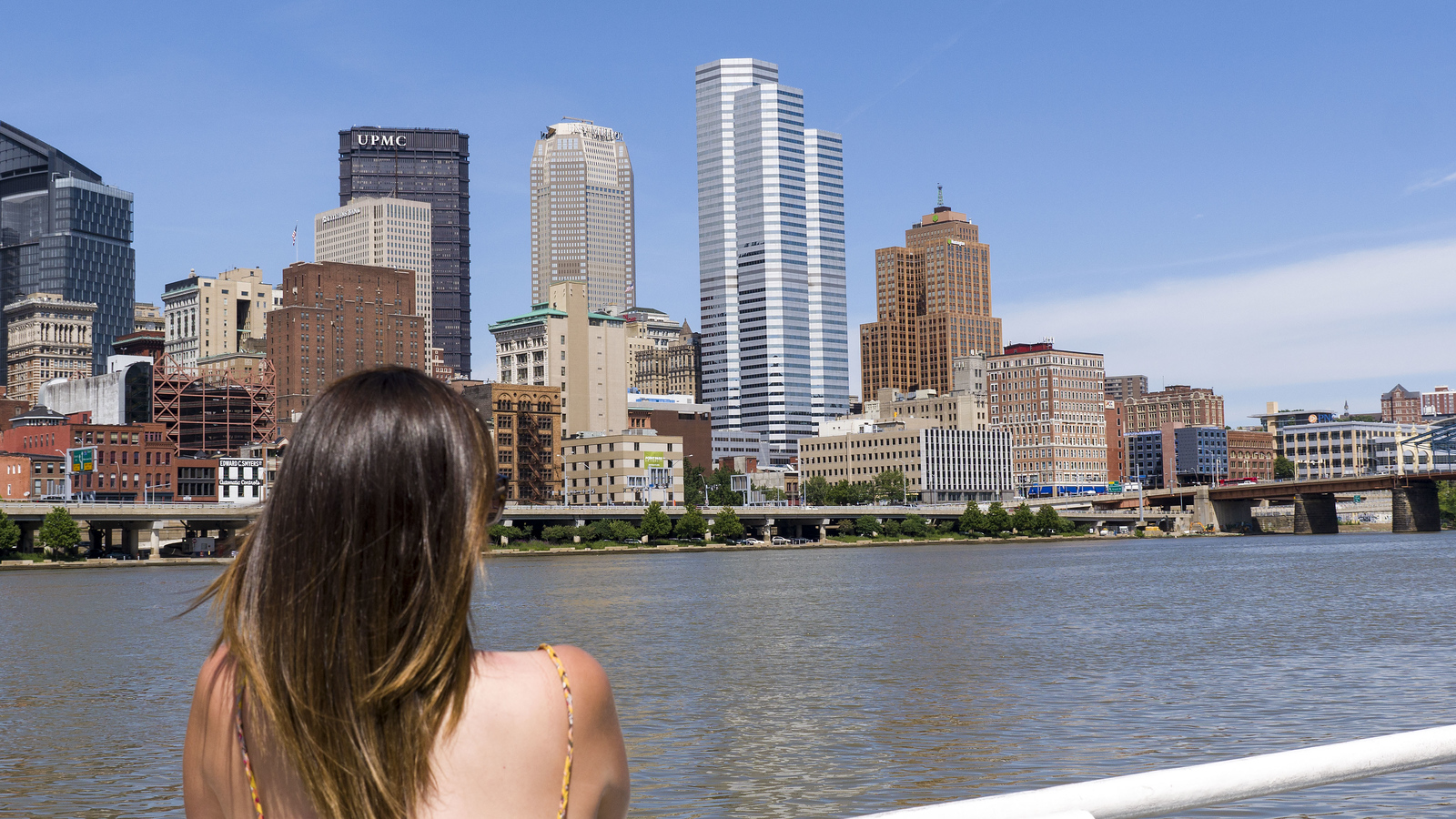 Pittsburgh’s unique skyline truly sets it apart from other cities. The scenery pairs skyscrapers with numerous bridges dotted across the river. There are a few excellent ways to explore the skyline and discover new perspectives of Pittsburgh.

A sightseeing cruise aboard the Gateway Clipper was one of the first things we did in Pittsburgh. It’s a great way to see the waterfront landscape along the Allegheny, Monongahela and Ohio Rivers. The captain and an employee narrate fascinating stories and facts, so it’s a great way to get acquainted with a new place. 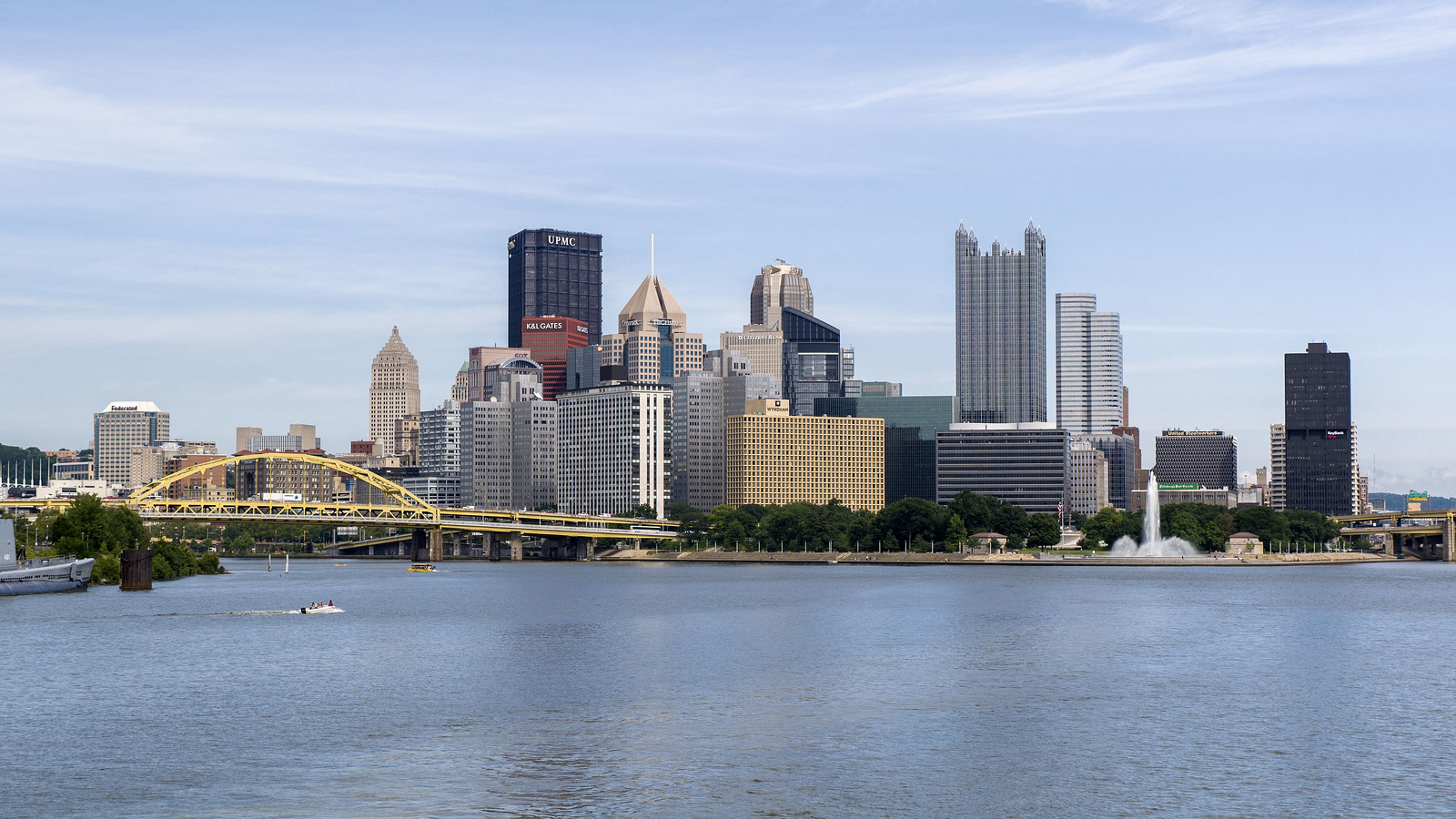 Similarly, we wrapped up our trip to Pittsburgh with a ride up the Duquesne Incline. One of the most popular tourist attractions, visitors ride the iconic red trolley car to the top of Mt. Washington for an epic view of the city. Originally built in the late 19th century to carry cargo up and down the mountain, the incline transports people back and forth nowadays. It’s something you must do on your first (or second, or third) trip to Pittsburgh. 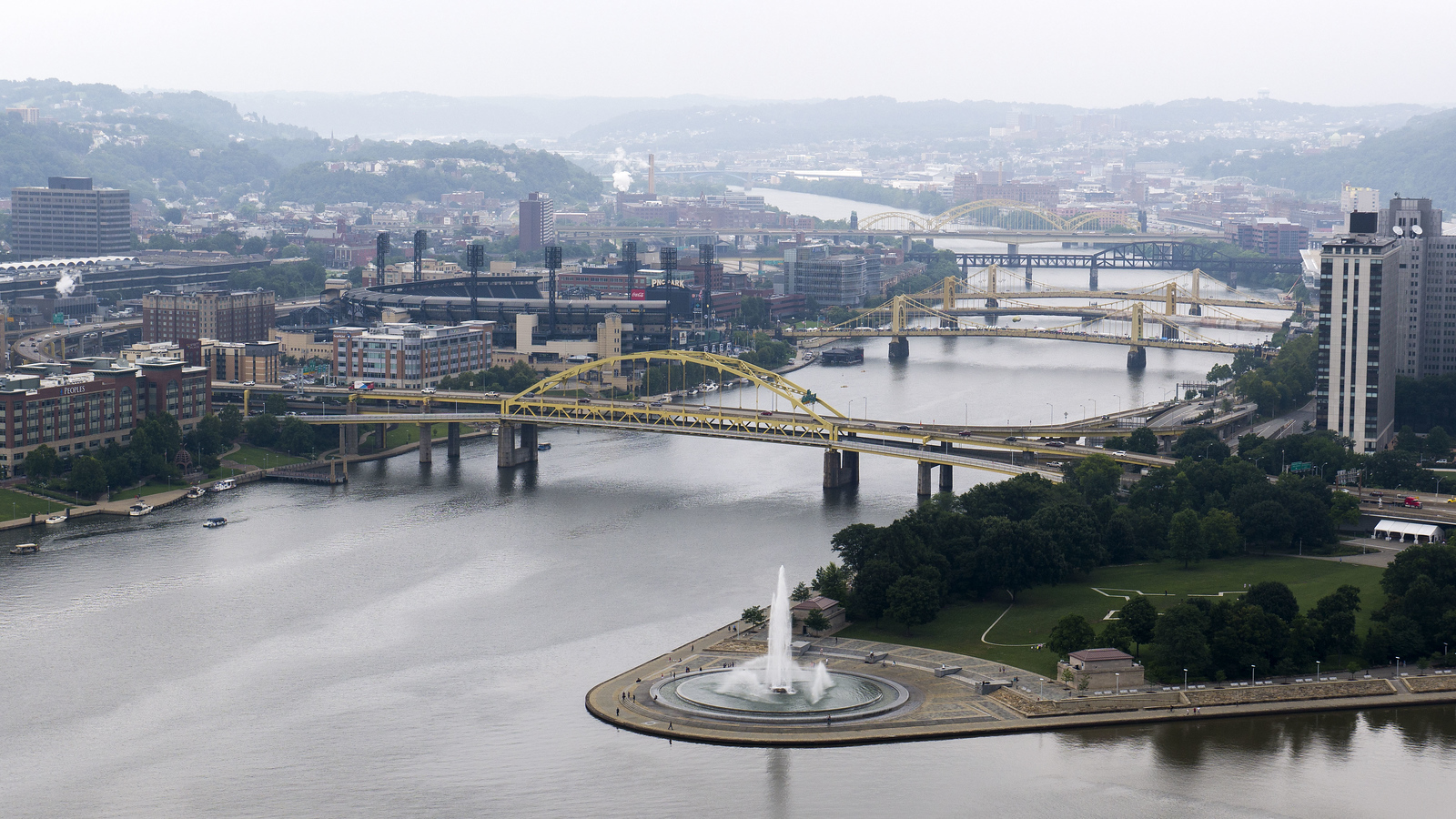 If you’re into art and culture, Pittsburgh is the destination for you. There are two art museums that you need to add to your itinerary: The Andy Warhol Museum and The Mattress Factory.

Become immersed in Warhol’s life and legacy as you wander around this eight floor museum. Andy Warhol was born in Pittsburgh and this is the largest collection of his works. This is also one of the most comprehensive single-artist galleries worldwide.

The Mattress Factory is a must visit for lovers of modern art. You can interact with most of the artwork and become a vital part of the experience. There are temporary and permanent installations, including two by Japanese artist, Yayoi Kusama.

However, you don’t need to enter a museum to witness the art of Pittsburgh. Simply walk around the neighbourhoods to uncover it for yourself. I enjoyed coming across street art and colourful murals all over town.

The Sprout Fund created many of these murals, which is a community project aimed to improve the appearance of neighbourhoods by covering the walls with beautiful art. If you’re not sure where to find these murals, Tour Anytime has a free audio tour, along with a detailed map.

Pittsburgh and Allegheny County have preserved hundreds of historic sites and landmarks that contribute to the vibrancy of the city today. It’s important to protect architectural relics in order to maintain them for future generations.

Station Square is a shopping and entertainment complex, redeveloped from the site of the old Pittsburgh Terminal Train Station. Bessemer Court, at the heart of Station Square, pays tribute to Pittsburgh’s history as a steel manufacturer. The Waltzing Waters fountain is a beloved spot where the water is choreographed to popular music.

And on the way from Station Square to the Gateway Clipper, there’s a bridge painted with murals celebrating the history of Pittsburgh.

The restored Eberhardt and Ober Brewery building is a historic site and current home to Penn Brewery. Three remaining buildings make up the Penn Brewery site, and all three are on the National Register of Historic Places.

Next to the patio, you can see the 150 year old lagering caves, dug into the side of Troy Hill. They used to keep the beer at a constant 55 degrees, long before refrigerators were invented. Penn Brewery is not only the oldest and largest brewery in Pittsburgh, it’s one of the only remaining breweries in the United States with lagering caverns. 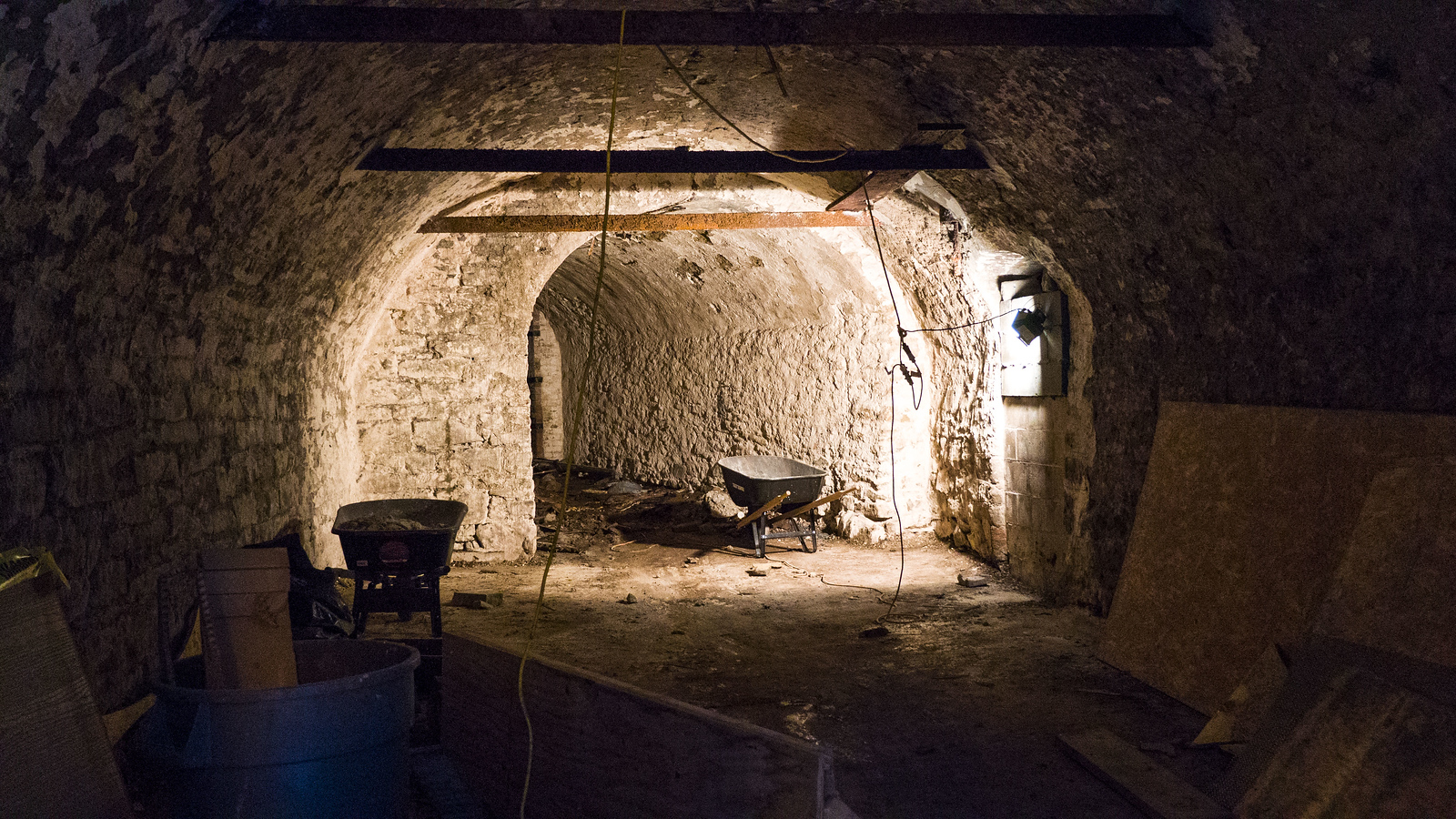 Speaking of beer, Pittsburgh has a growing and thriving craft beer scene. New ones are always emerging and it seems like you have endless refreshing options.

If you’re not sure where to start, take a tour with City Brew Tours. We were transported around in their van, and we didn’t have to worry about driving ourselves around town.

You can try a variety of different brews at several breweries, all with interesting back stories and delicious beer. At each location, we went behind the scenes to observe the brewing process with a glass of beer in our hands. We got to taste a variety of samples at each location, too. 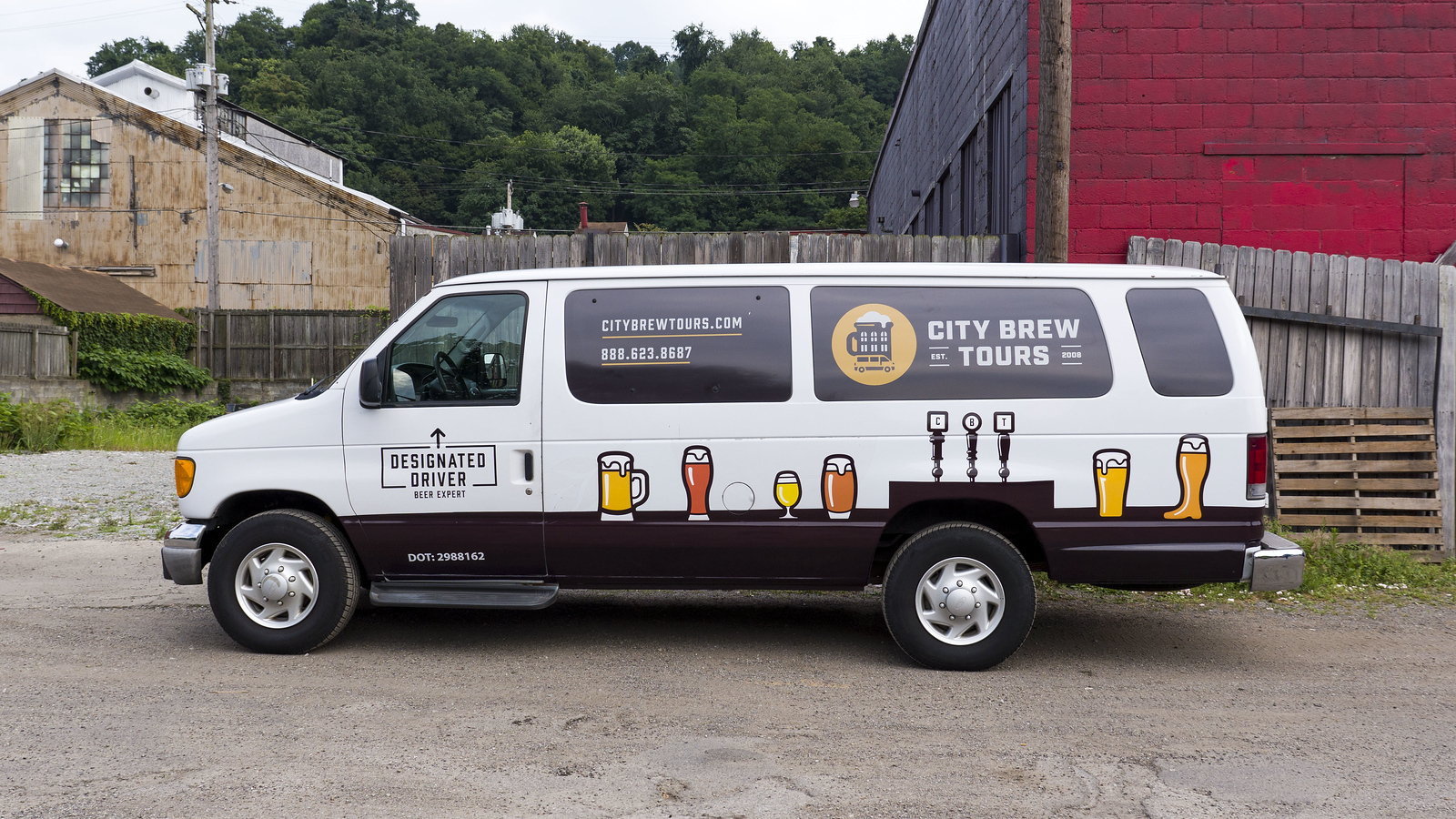 Allegheny City Brewing Co in the Deutsche Town Neighbourhood served all sorts of inventive flavours of beer. The “Serviceberry Wild” is a sour ale with service berries, aged in red wine barrels. The “Starlake” is a wheat ale with red raspberries and white tea.

For the beer purists out there, Allegheny City also has more traditional brews, such as their Belgian-style ale or a brown ale.

Departing from the topic of beer, let’s move on to spirits in Pittsburgh. Spend some time at Wigle Whiskey to check out the barrelhouse, the tasting room, and the whiskey garden.

Pittsburgh was the epicenter of American whiskey production dating back to the 1700s. Wigle Whiskey continues this tradition, even winning numerous awards. Wigle is recognized as the most awarded distillery by the American Craft Spirits Association.

Sample the whiskey and try a cocktail or two! The whiskey garden is a large, outdoor event space and we were fortunate enough to have lunch there. Local chef Rafael Vencio created a three-course delectable lunch, all paired with whiskey. Events range from cocktail classes to live music, so you can easily spend a few hours at Wigle.

Thankfully, vegan options in Pittsburgh are plentiful. You won’t go hungry while maintaining a plant-based diet. While there are a number of vegan restaurants like Apteka and B52 Cafe, you can find vegan menu options at many restaurants.

For breakfast, try vistiing The Vandal. The chef is very aware about vegan diets and even if there’s nothing on the menu, I’m sure that something can be prepared for you. I enjoyed toasted sourdough with a local jam, as well as a beautiful fingerling potato and vegetable dish.

For lunch, head to the Strip District and dine at the famous Enrico Biscotti Bakery & Cafe. Their pizzas are cooked in wood fired ovens. Order the kale and white bean dish to start and a vegan pizza as your entree (ask for no cheese and vegetable toppings). The dough is chewy and just perfect. 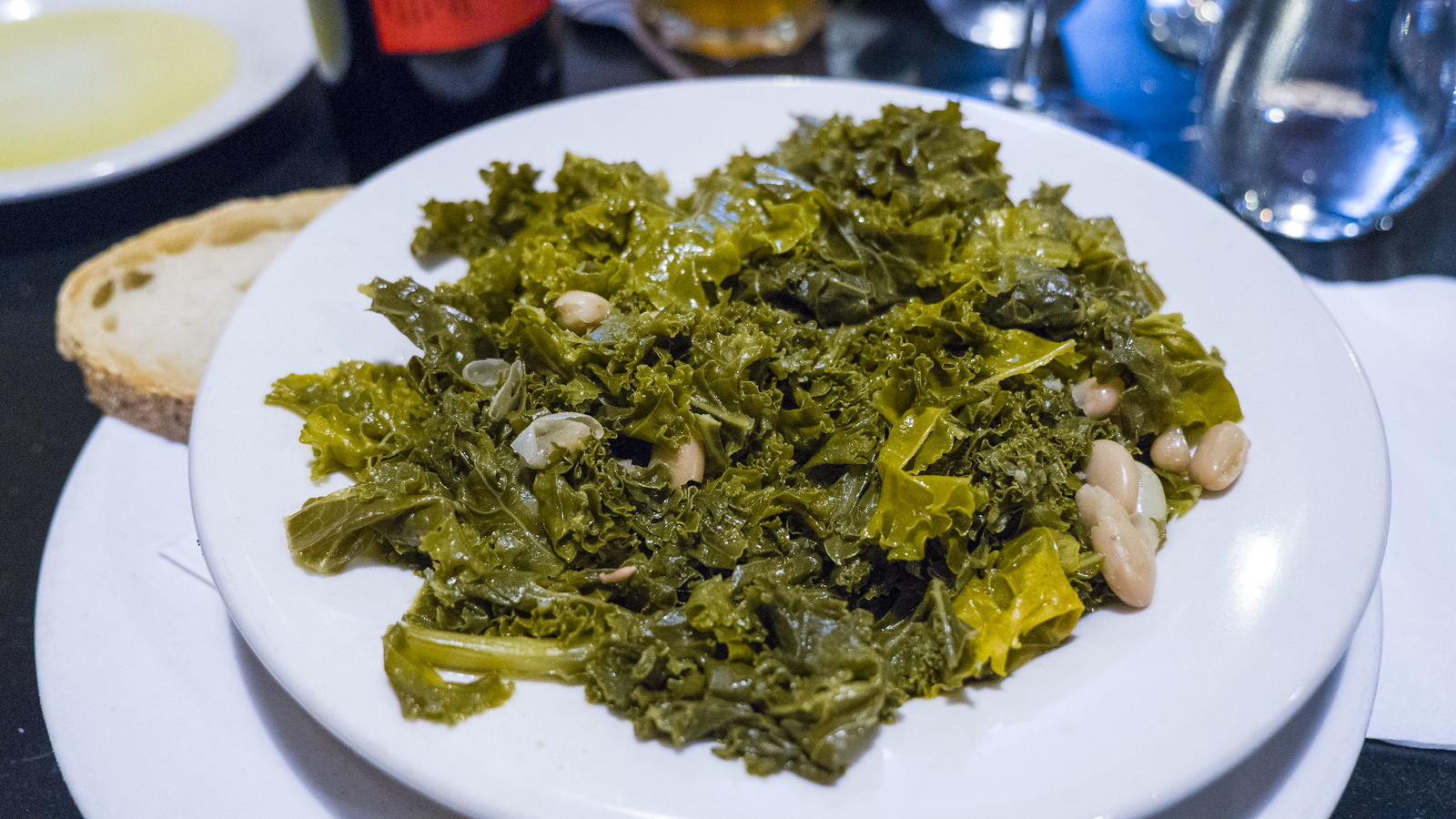 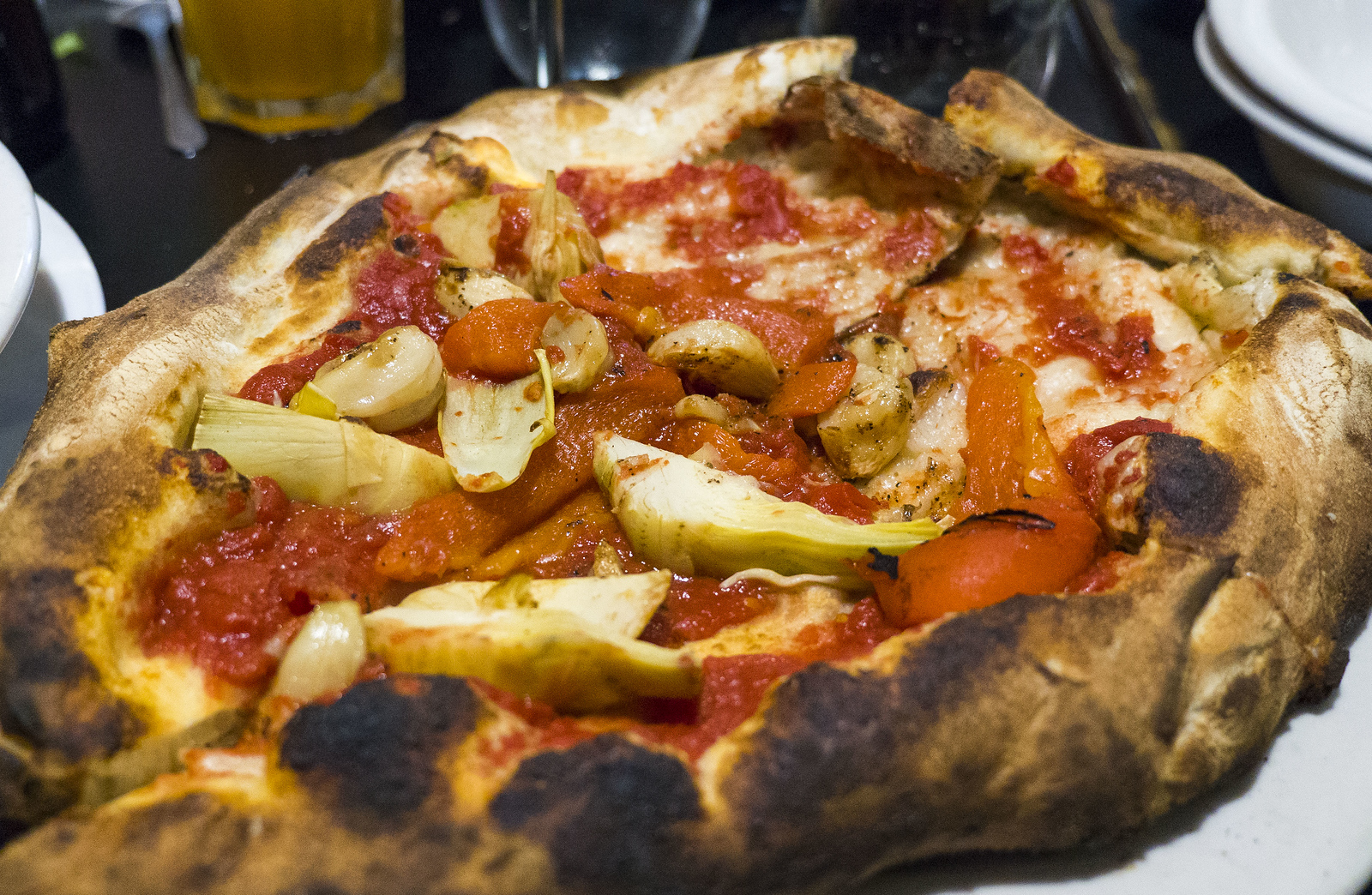 Treat yourself to one of several vegan / vegetarian restaurants in Pittsburgh:

To discover the best of Pittsburgh’s bike paths, we embarked on a tour with Golden Triangle Bike Rentals. Our guide, Chris, lead us all over town while explaining interesting facts about Pittsburgh on frequent stops on the way.

We got to ride across bridges and along waterfront paths. I never realized just how accessible Pittsburgh is by bicycle. You can really see a lot of the city by bike, and I highly recommend it.

Even if you’re visiting Pittsburgh and don’t want to book a full tour, you can rent the bicycles on their own by the hour. Try to book the guided tour if you can as it’s well worth it.

Pittsburgh has dozens and dozens of neighbourhoods, some only spanning a few blocks.

While I fully intend to travel back to Pittsburgh to explore more of the neighbourhoods, there’s really something for everyone here. There’s the market vibe of the Strip District if you’re looking to shop for fresh produce. Lawrenceville is a little more trendy and artsy. Shadyside has high end boutiques, while Squirrel Hill offers more shopping experiences. Sewickley has streets lined with trees, great restaurants, and night markets in the summer.

The idea of visiting several different neighbourhoods on my next visit to Pittsburgh is fueling my desire to return.

Through spending a couple of days in Pittsburgh, I learned about some of its quirks. For instance, the residents have their own language, known as Pittsburghese. There are different pronunciations and even entirely new words for things.

The word ‘yinz’ means you (when there is more than one person). People from Pittsburgh might say ‘how’s about’ instead of ‘how about’. Much like in Canada, soft drinks are called ‘pop’ instead of ‘soda’. There are tons of variations of the English language when you arrive in Pittsburgh, so you’d better study up on your terminology.

Fries on everything? Now that’s something I can get behind. The 24-hour diner, Primanti’s offers their famous sandwiches topped with cole slaw and fries. Pittsburghers even like to put fries on their salads!

REMINDS ME OF HOME

I was born in Hamilton, Ontario, Canada. In many ways, there’s a familiarity about Pittsburgh that really reminds me of home. Maybe it’s the slight grittiness in some neighbourhoods. Or maybe it’s the fact that they were both former steel cities that have progressed from that industrial past.

They’re both extremely bike-friendly with waterfront paths. Both Hamilton and Pittsburgh have an escarpment with scenic overlooks.

The arts and culture scene is thriving in both Pittsburgh and Hamilton, and they’re both considered to be livable, family-friendly cities.

While both steel cities have their differences, I immediately forged a connection with Pittsburgh even before exploring much of the city. While I only spent 48 hours there, my trip inspired so many more ideas for my adventures next time. 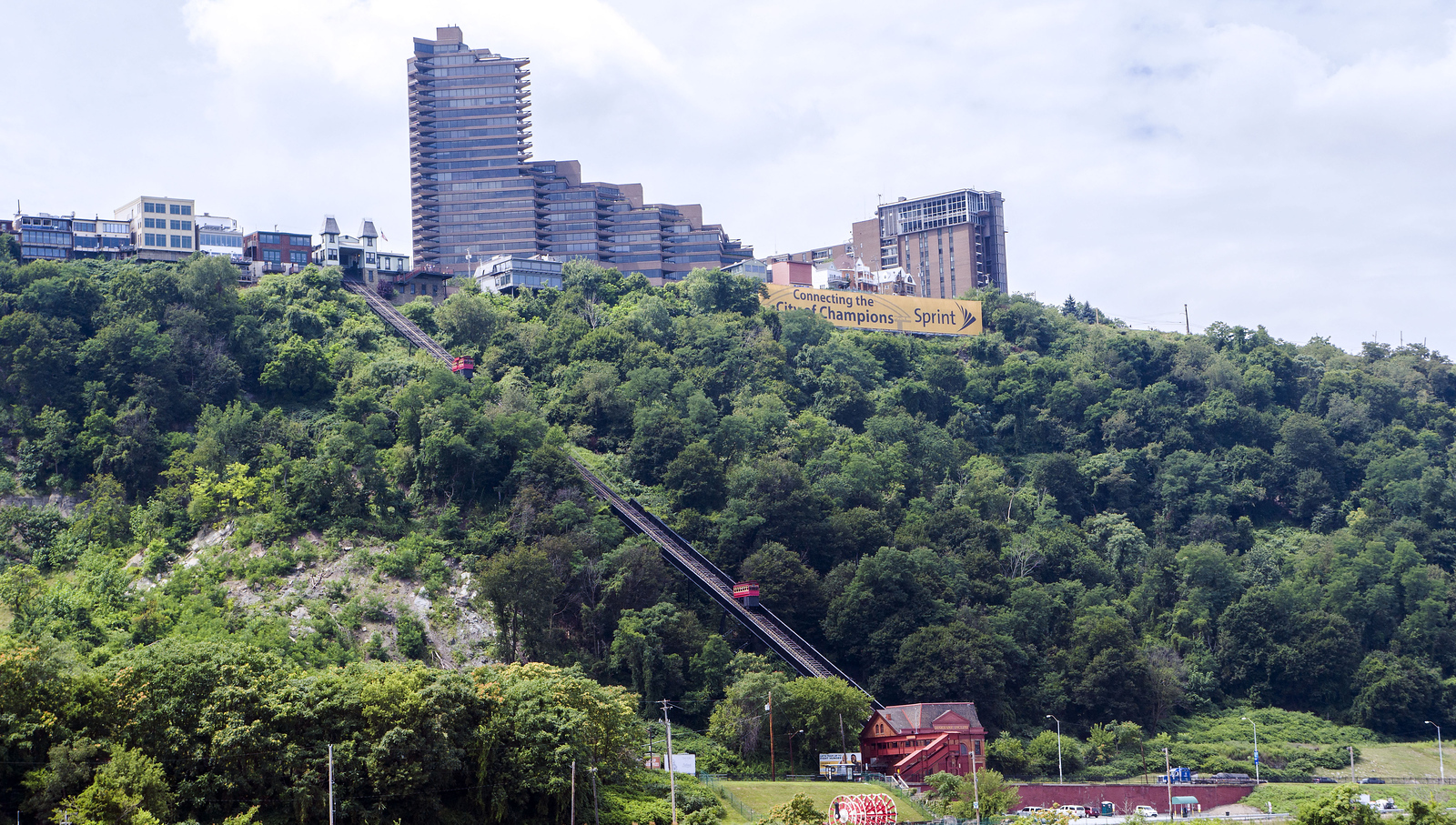 Beyond these 9 reasons to fall in love with Pittsburgh, you’re going to fall head over heels for your overnight stay at the Hotel Monaco by Kimpton. Centrally located downtown, the Hotel Monaco has artist inspired designs from the public spaces to the individual rooms.

This hotel is simply stunning. Here’s a little sneak peak:

Check out my entire travel photo album from Pittsburgh, PA.

There are so many reasons to fall in love with Pittsburgh. Whether it’s for outdoor activities, its quirks, or even a personal connection, Pittsburgh is a city that travellers need to visit more often. It’s the perfect weekend getaway, though you’ll never see it all in one weekend. I’m already planning for my next visit as Pittsburgh left me longing for more. 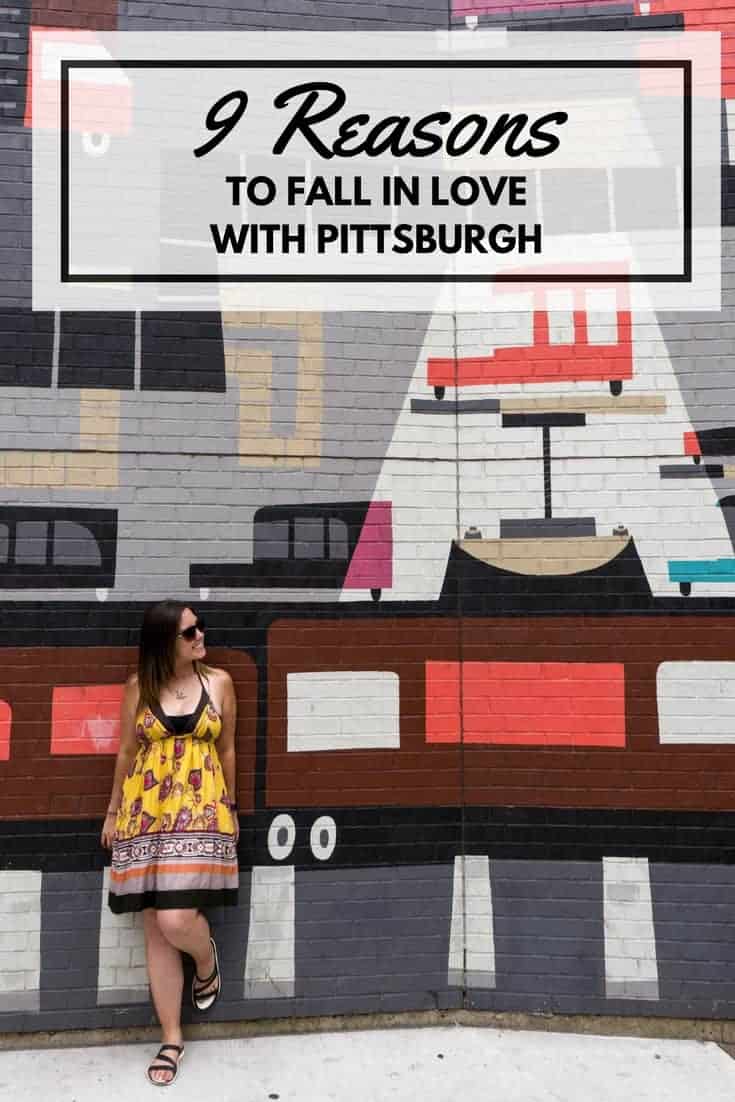 Thank you so much to Visit Pittsburgh for hosting my stay.

What’s your favourite thing about Pittsburgh?