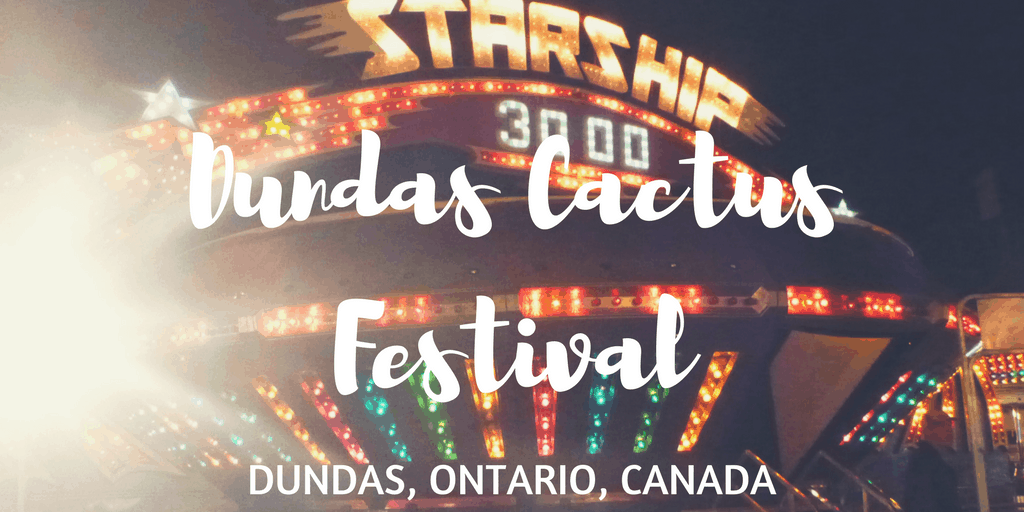 It’s the biggest festival of the year in Dundas, Ontario!

You might wonder why I’m featuring a small town festival. Well, it happens every year in the town where I grew up. Dundas, Ontario is a small town in southern Ontario. It’s now a part of the larger nearby city of Hamilton, but it will always be Dundas to me.

So, what’s up with this Cactus Festival anyway?

The Dundas Cactus Festival happens the third weekend of August every year. I’m pretty sure that everyone in town turns up for it, and people from nearby cities even come out for the festivities. The main downtown street (King Street) is closed down to vehicles. People can walk through the streets. Vendors and shops are open until midnight. There’s stages with live music featured all day and night. Food trucks line the streets featuring tasty, unhealthy treats. And there’s a carnival midway with rides and games.

On the Thursday night, there’s the annual Dundas Cactus Festival parade with floats featuring local organizations, businesses, and marching bands. The rest of the festival starts up on Friday night and runs throughout the entire weekend. This year, I took Justin to experience the Dundas Cactus Festival with me for the first time.

I remember wandering around here throughout middle school, high school, and even during university. You’d gather with your friends, and even run into people you haven’t seen in ages. Often times, you pick up where you left off. While Dundas isn’t the tiniest town (it has a population of about 20,000 people), it definitely has that quaint small town vibe.

WHY IS IT CALLED THE CACTUS FESTIVAL?

Why in the world would a small town in Canada have a festival celebrating cacti?

Well, Dundas used to be home to an internationally renowned cactus grower called Ben Veldhuis Cactus Greenhouses. In fact, while Dundas is known as a lovely valley town with beautiful waterfalls, scenic hiking trails, and the rugged escarpment…it also became known as the Cactus Capital of Canada. Wikipedia even calls Dundas the “Cactus Capital of the Universe“, although that might be taking things a little too far!

When this community festival and unofficial town homecoming first started up, it was only fitting that its name paid tribute to the cactus.

OUR NIGHT AT THE DUNDAS CACTUS FESTIVAL

I met one of my best friends, Shannon at her home and we walked down to the fair. It’s easiest when you live in Dundas or you’re friends with a local so you have a place to park your car. Otherwise, you might be able to snag a spot on a nearby side street or take public transit into town.

As we approached King Street, there were crowds of people wandering around, enjoying themselves. Vendor tents were set up along the road. Musical acts performed on stages. There were crafts people selling their wares, bouncy castles for the kids, and tons of food trucks with something for every discerning taste.

The Lion’s Club had a charity gambling table with the game “Crown & Anchor” where we put down our quarters and hoped for a win. In the end, we lost all of our change, but it went to a good cause – the local food bank.

RIDES AT THE MIDWAY

Besides all of the shopping, eating, and wandering around, we were thrilled to go on some of the midway rides. The largest parking lot off King Street was filled with rides. There were all of the trappings of a typical midway – carnival rides, games, and stands with cotton candy. We all bought a fistful of tickets and went on a bunch of rides.

The first ride we went on was the Ferris wheel. It always makes me giggle to think about this ride because Justin is afraid of heights and I always drag him on it. But, he’s always willing to suffer it out for my sake. Shannon, Justin and I all climbed into a bucket. I loved the view from the top and the warm, summer breeze.

Justin and I also rode the teacups and we were the only ones on this ride. For some reason, I get a huge kick out of the really fast-spinning rides that twirl around super fast. This was a ride that you partially controlled by rotating the wheel in the center to make it spin faster.

As the ride began, Justin and I started cranking this wheel around as fast as we could. Soon enough, the teacup seemed like it was spinning out of control and the whole world was a dizzy blur! I just started laughing uncontrollably. Once the ride was over, we both stumbled off and barely made it to the gate without falling over. Good thing we both have pretty tough stomachs!

Shannon did the smart thing and munched on some cotton candy while we were spinning nearly out of control.

VIDEO OF THE MIDWAY

And here’s a really short video of us goofing around on the Ferris wheel!

Your choices for hotels in Dundas are pretty slim, although I’m sure there are a fair amount of Airbnbs to choose from. Your closest accommodations include the Visitor’s Inn (just up the street as you enter Hamilton) and a more luxurious hotel, The Barracks Inn, in the nearby town of Ancaster.

While the Dundas Cactus Festival holds some serious nostalgia for me, I highly recommend that you check it out if you’re in the area. It’s fun for the whole family during the day and in the evening, while it’s a great place to meet up with friends for some rides, food, or a drink at the local pub (check out the Collins or the Thirsty Cactus!). 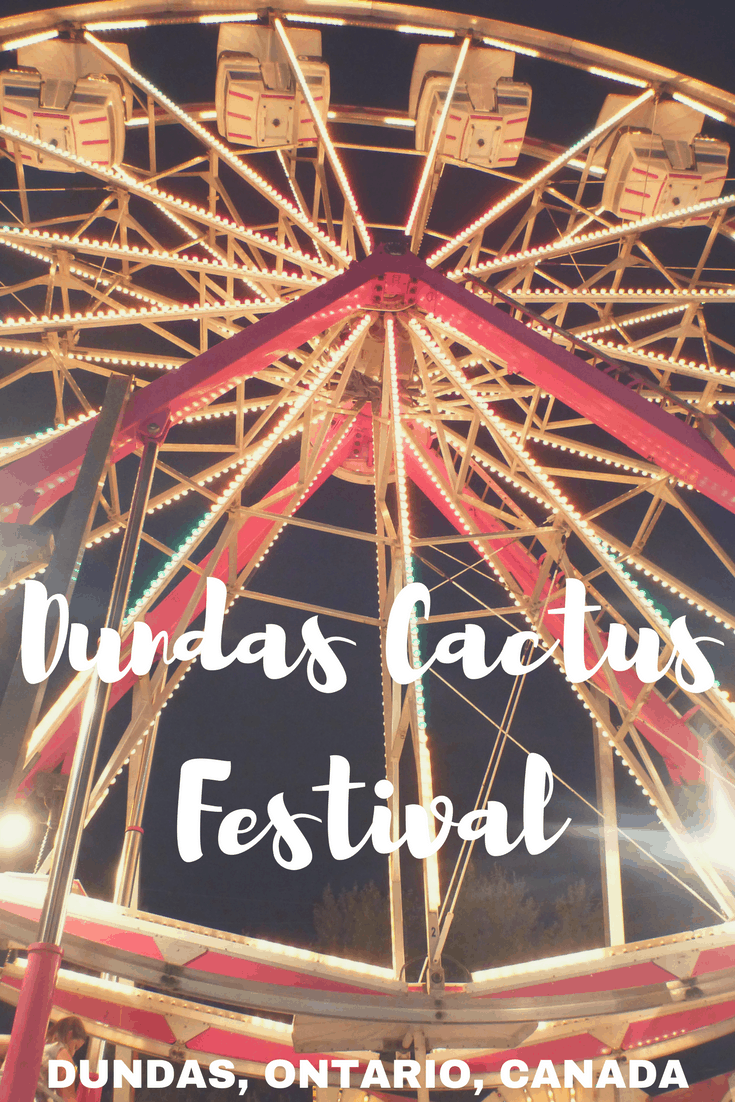 What’s your favourite small town festival? Tell me about it!

Amazing rides. The last time I got one of them, I puked afterwards. Kept asking myself "why did i go on the ride"? Its trilling though.