Discover the secret world inside the Doge’s Palace. Learn about this fascinating history.

If you’re visiting Venice, you’ll certainly want to spend some time in one of the most popular areas. While I do enjoy wandering to the lesser known spots, sometimes you have to see the famous tourist traps. There’s a reason why they are so beloved, and usually it’s because there’s something really cool there. In this case, one of the most crowded places is St. Mark’s Square (Piazza San Marco), home to a few prominent attractions. There’s St. Mark’s Basilica, the Campanile, the Bridge of Sighs, and Doge’s Palace (Palazzo Ducale). While it would be fun to merely marvel at the intricate architecture, I prefer to learn more about the history of a place when I travel. The best way to learn is by taking a tour with an expert. This person can teach you about the background of a historical site, and hopefully even tell a few memorable stories. If you enjoy exploring what’s beyond the surface, you should take the Doge’s Palace Secret Itineraries Tour.

A regular ticket to the Doge’s Palace will allow you to walk around many public rooms in the building that are quite enchanting. On the Secret Itineraries tour, a guide will go into detail about some of the private rooms and chambers where many important administrative duties were carried out behind the scenes. Though you could hardly tell from the bright and shiny exterior of the courtyard, the palace has a dark past. There are musty prisons, hidden passageways, secret rooms, and torture chambers. These areas of the palace are only available to those who purchase a Secret Itineraries ticket in advance. I highly recommend that you don’t wait too long to book your ticket as they do sell out. There are English tours three times daily (9:55, 10:45, 11:35) and the tour lasts about an hour and fifteen minutes. After the tour is over, guests are free to explore the rest of the palace for as long as they’d like. As the tour is pre-booked, it’s a great way to avoid huge line-ups. We booked our tickets online in advance without any issues and brought our receipt to a desk near the front entrance. From there, we were allowed straight into the property where we walked around the courtyard until our tour officially started. Tickets are €20,50 for adults and €14,50 for children/youth/seniors.

Before entering Doge’s Palace, we caught some glimpses of the famous landmark, the Bridge of Sighs.

The Bridge of Sighs is an enclosed bridge that was constructed in 1600. It passes over the Rio di Palazzo, connecting the interrogation rooms in the Doge’s Palace to the New Prison. These small glimpses of Venice through the tiny windows along the bridge were the prisoners’ last views of the outside world as they were moved to their jail cells. 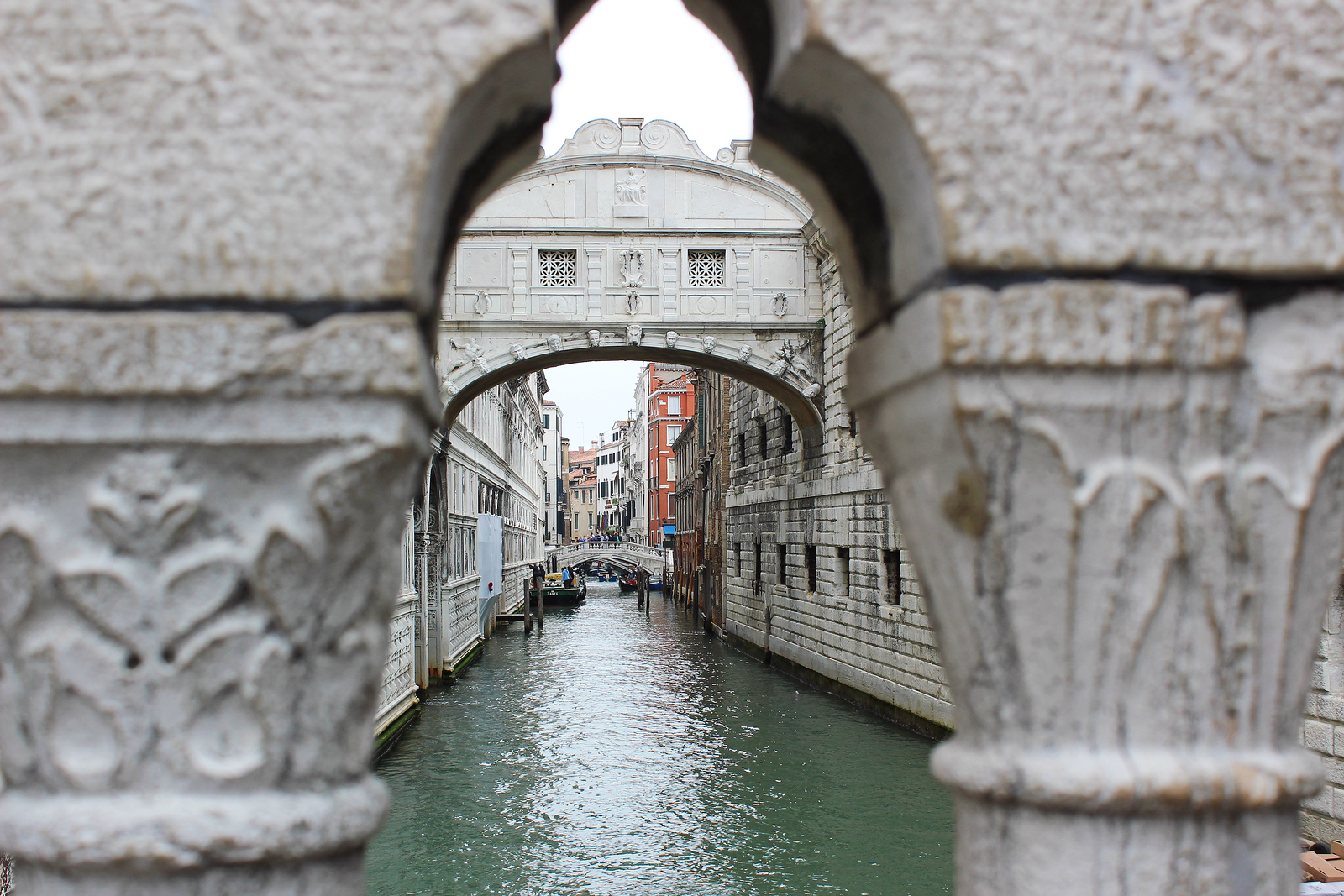 Before the tour started, we walked around the courtyard, admiring the grandiose arches and detailed statues. 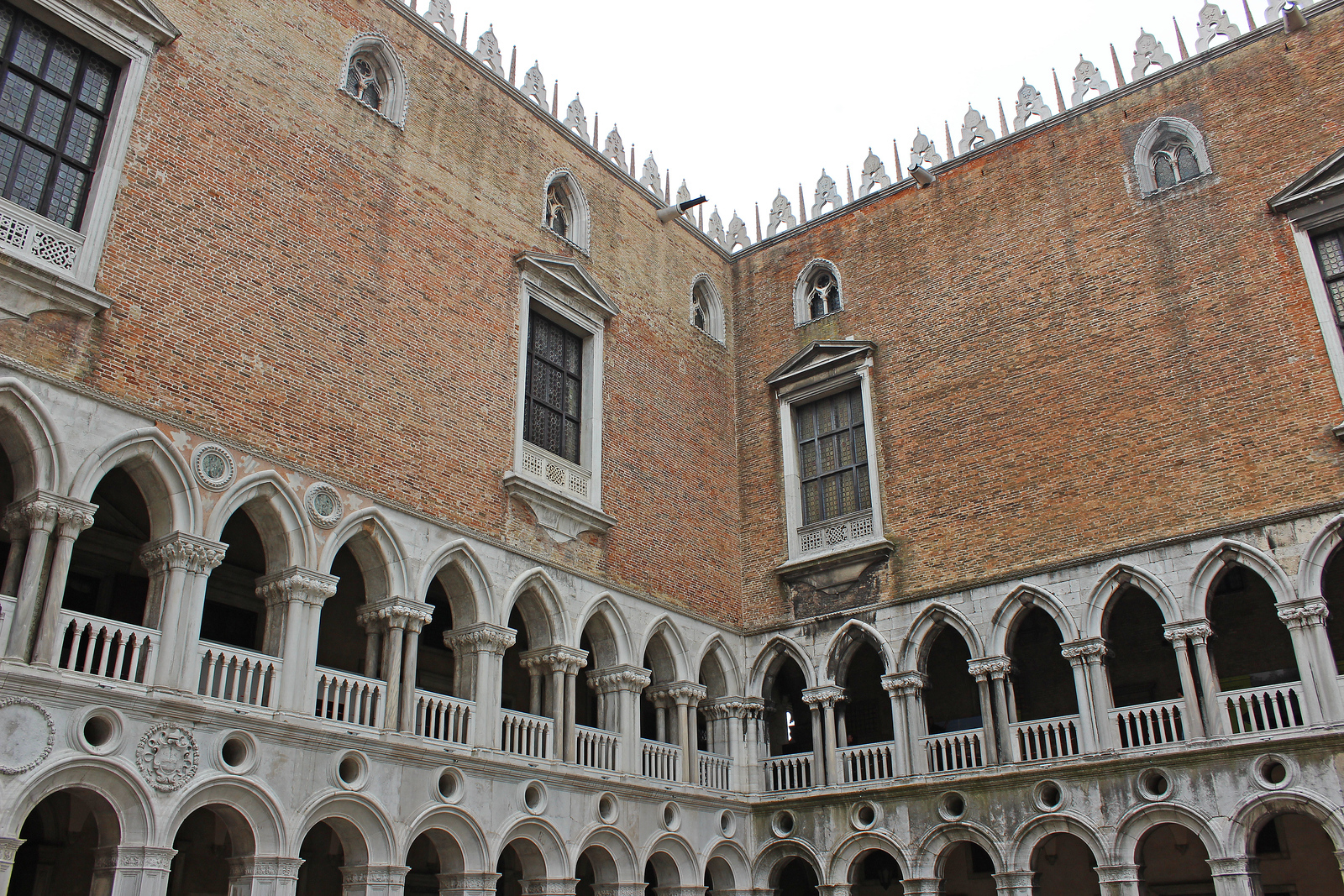 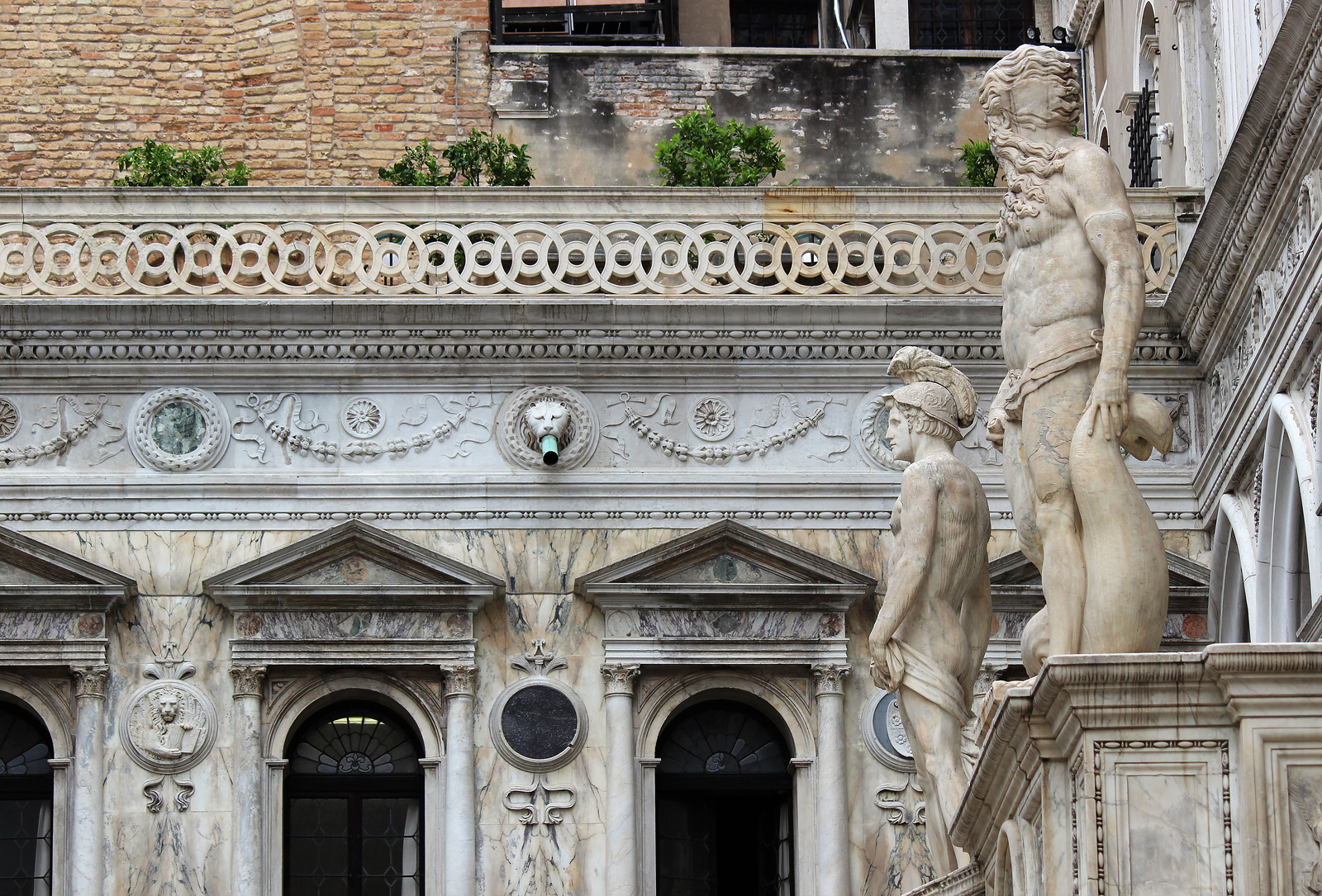 Our tour guide was very knowledgeable and spoke perfect English. She provided us with a detailed account of Venice’s judicial and political history, and how that related to the spaces around the palace. The Doge of Venice was the supreme magistrate and leader of Venice for over 1000 years. Doges were appointed to hold their positions for life. Typically, an elderly man was purposely chosen so he wouldn’t hold the position for too long.

We learned that the true power of the Venetian Republic was not fully revealed in the extravagantly decorated public rooms. The important decisions were decided in tiny offices and secret rooms hidden down narrow passageways. There was a secret service that worked in the palace to seek out troubled citizens. This included 10 judges and a special council of three. Anyone could accuse someone else of a wrongdoing by writing it on a paper and slipping it through the stonework slots (decorated as a lion’s mouth) on the sides of the palace walls. These accusations were investigated and many individuals were brought to trial. However, a person who accused someone who wasn’t guilty could face harsh penalties themselves. Those who were found guilty of crimes could be held as prisoners at the palace, faced exile, could be tortured, or even executed publicly in the square.

Our first stop was the Old Prison on the ground floor. In the 12th century, there were a few holding cells; however, many more were built in the 13th and 14th centuries to occupy the whole ground floor. These were not very comfortable places to live. The cells were exposed to many elements, including extreme heat, cold, and flooding. They were dark and did not have proper ventilation. These spaces became known as the Pozzi (the Wells). The walls are covered in graffiti scrawled by former prisoners. 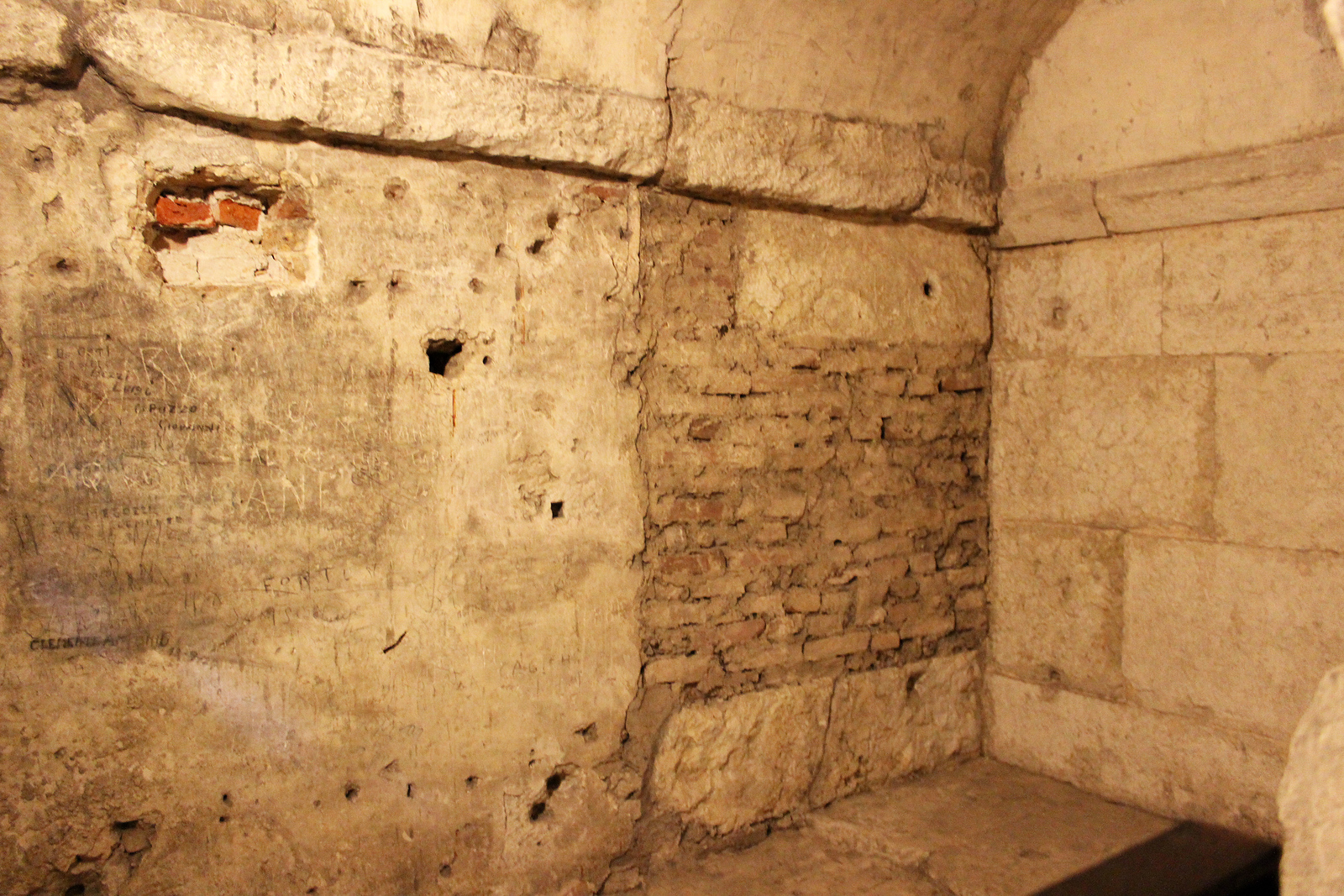 Chamber of the Secret Chancellery

The full council was responsible for organizing the work of the Senate. The Chamber of the Secret Chancellery is lined with wooden lockers that contained secret documents. The locker doors are decorated with coats-of-arms for each chancellor from 1268 and on. 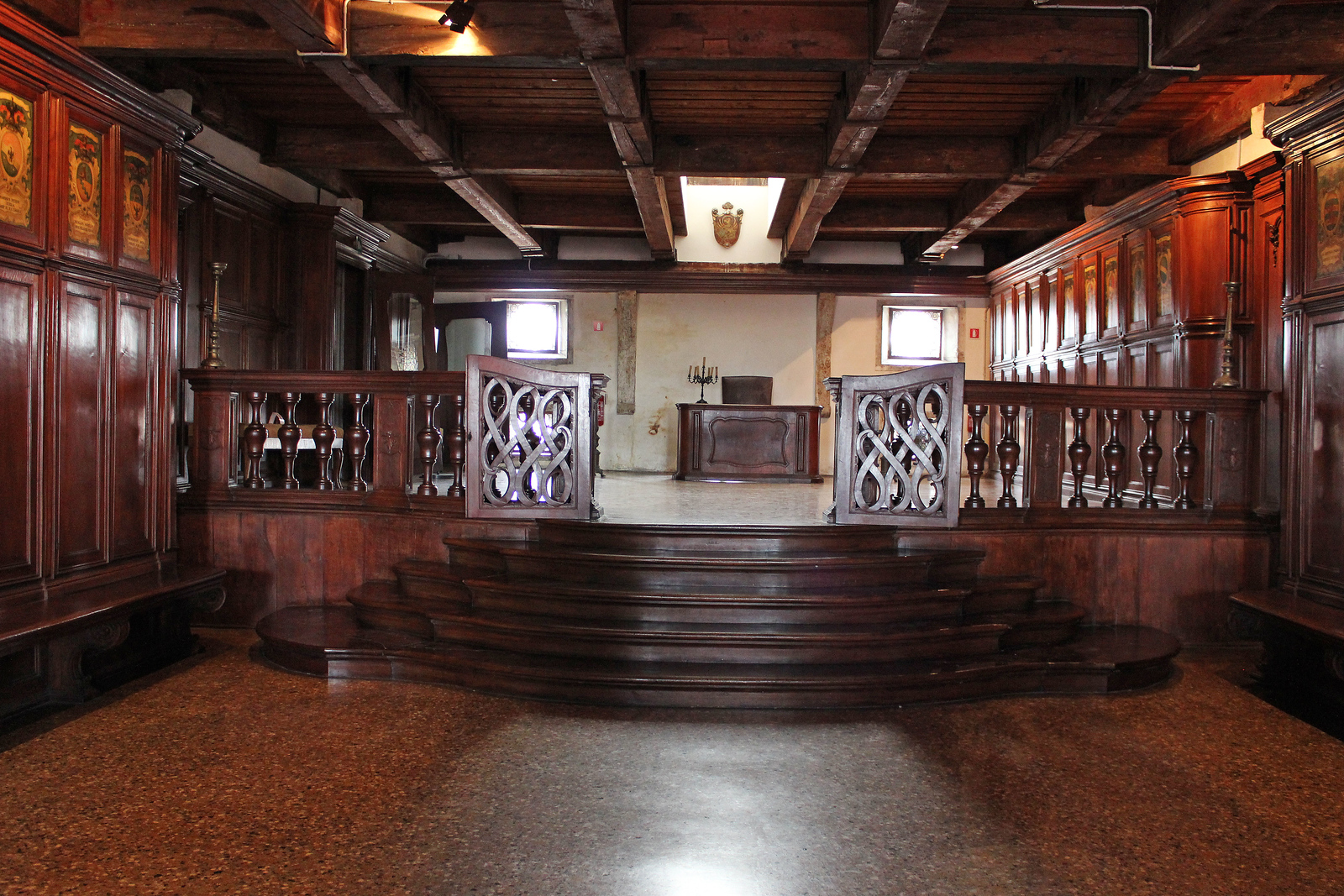 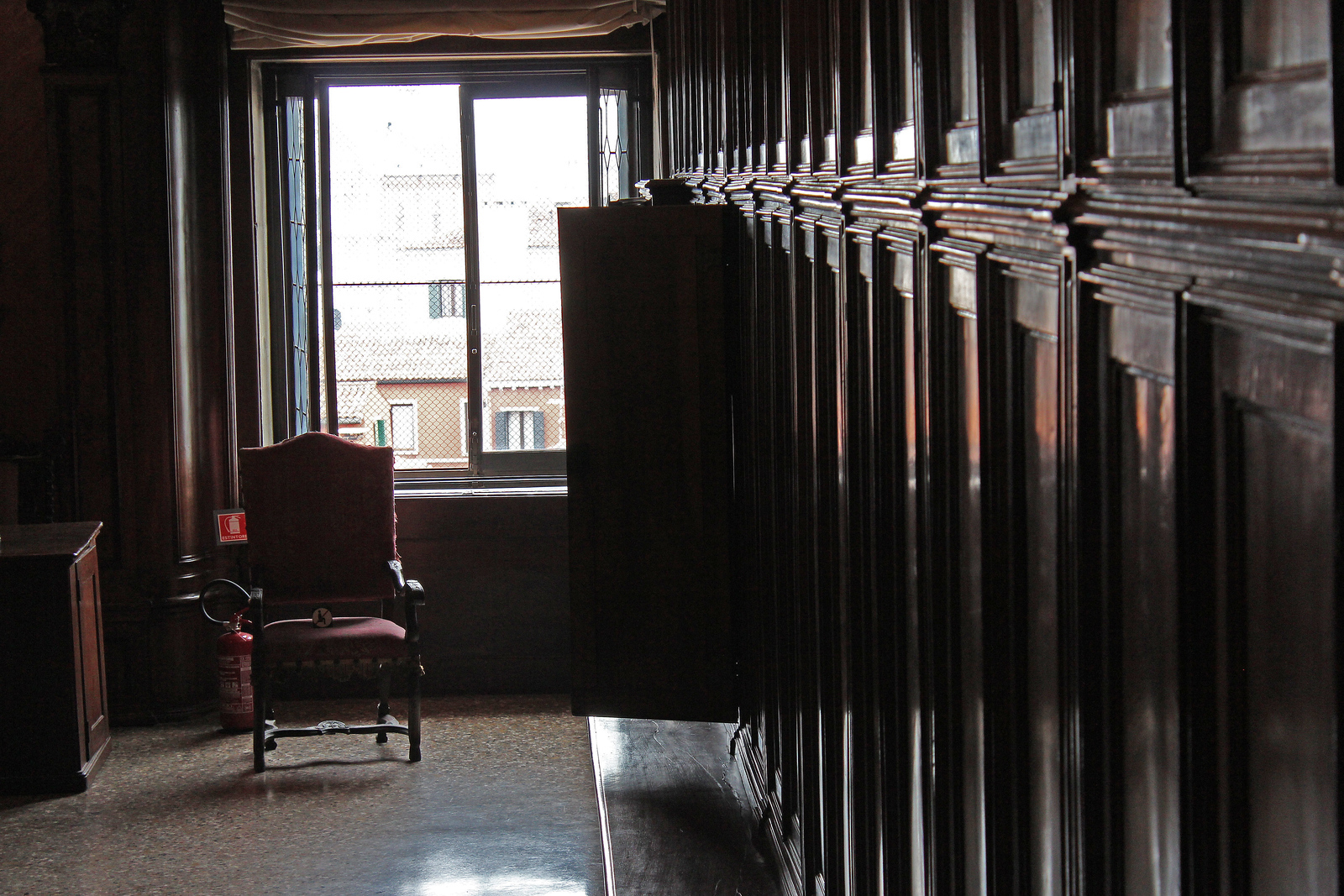 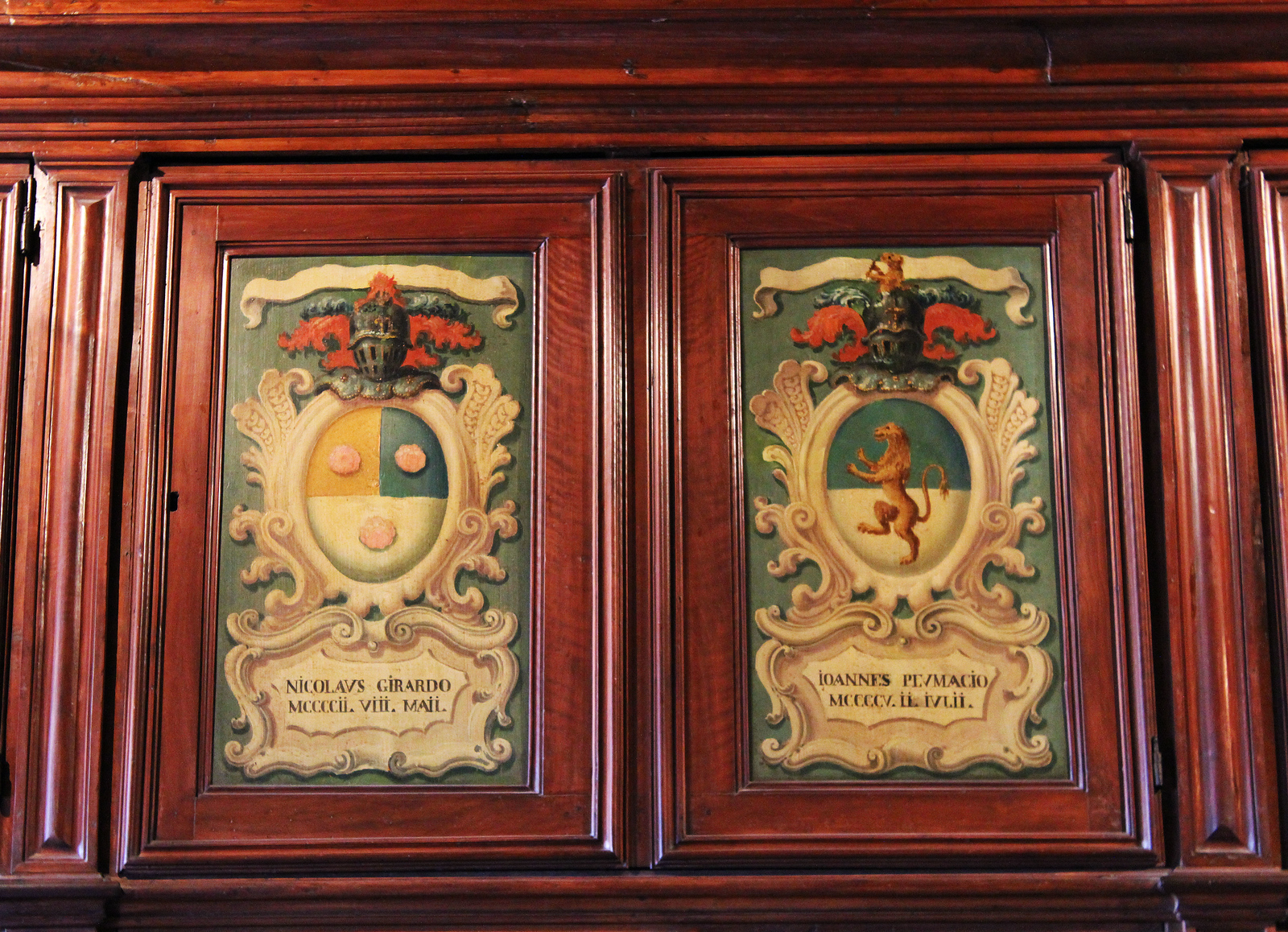 Also known as the Chamber of Torment, prisoners were brought here to be interrogated by the judges. The inmate would be hung by the rope with his arms tied behind his back. These practices of torture were gradually stopped in the 17th century.

The Piombi (The Leads) were forerunners to the New Prison. These were special cells beneath the roof of Doge’s Palace, reserved for special cases being looked at by the Council of Ten. These cells offered much better living quarters than those in the Old Prison and often housed prisoners of a higher status. The most famous prisoner was Giacomo Casanova and he was held captive in the Piombi. Casanova was an Italian author, adventurer, and famous womanizer. He was sentenced to five years in the Piombi without a trial. Although he was closely guarded, Casanova escaped his prison cell after being confined there for one year. Allegedly, Casanova made friends with an imprisoned monk in a neighboring cell. They communicated with each other by exchanging books back and forth. Casanova sent the monk a pointed instrument hidden within a book and beneath a platter of food. The monk cut a hole in the ceiling, connecting both of their cells. Together, they were able to escape. Many historians are skeptical of Casanova’s story. They think that he simply bribed his way out of prison, and constructed this elaborate heroic tale after the fact.

Our tour group ventured up to the attic of Doge’s Palace, which also housed many weapons. We browsed the armory and even caught a peek at the rafters above the Hall of the Great Council.

Chamber of the Inquisitors

In order to protect state secrets, three inquisitors were chosen: two were picked from the Council of Ten, and the third was selected from the district councillors who waited on the Doge. They were all sworn to secrecy, no matter what information they discovered. The inquisitors were allowed to obtain this information by any means possible, even torture. The room has a secret entrance behind a wooden wardrobe. The passageway behind the wardrobe leads directly to the Chamber of the Council of Ten. The room was very elaborately decorated, with elaborately designed walls and ornately painted ceilings that date back to the 1500s. 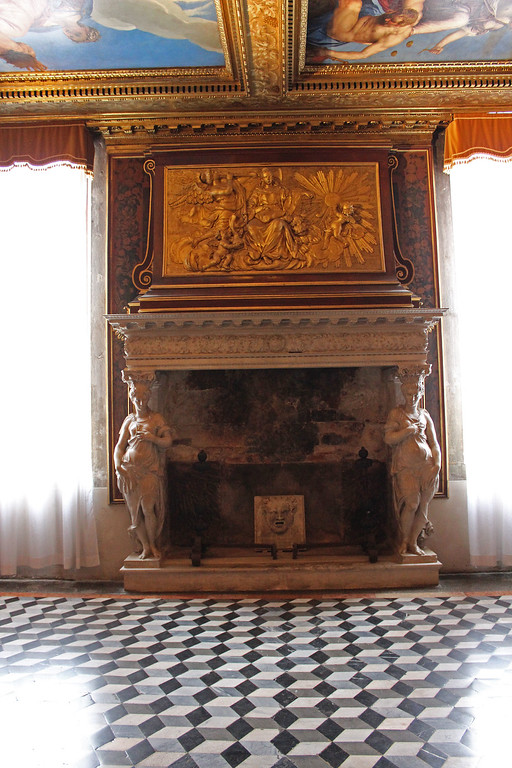 Chamber of the Three Heads

These three judges were picked each month from the Council of Ten. They were responsible for overseeing court cases and ensuring that the rulings were swiftly carried out. 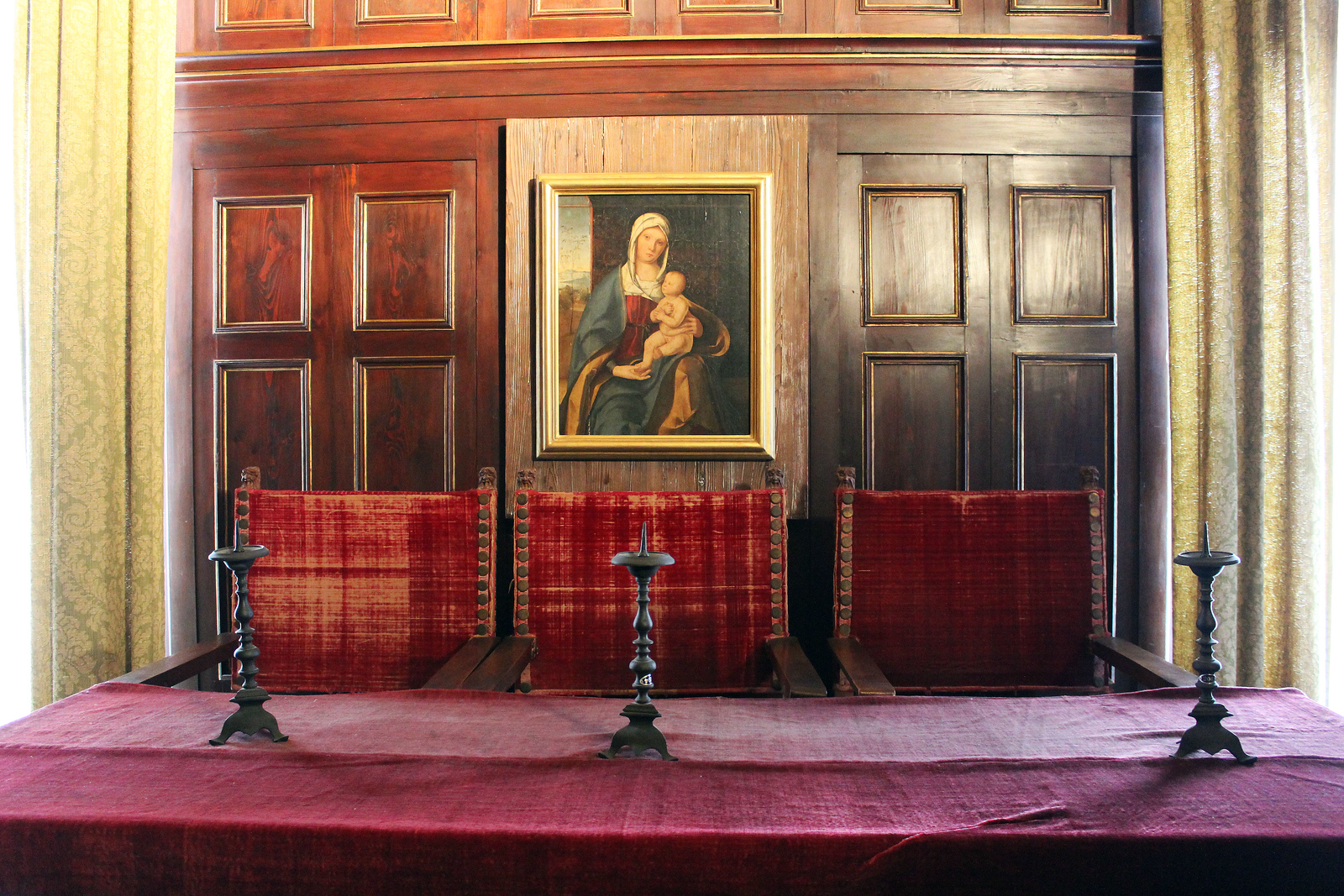 Public Spaces on the 1st and 2nd Floors

Our tour came to an end when we reached the public spaces of the palace. These larger rooms on the first and second floors are accessible to anyone who purchases a regular ticket to the Doge’s Palace. Access to these areas comes with a Secret Itineraries tour ticket. We bid our insightful tour guide farewell and ventured out on our own, just the two of us. It’s quite amazing to witness the highly detailed paintings completely covering the walls and ceilings. Behind those lavish embellishments are many stories and secrets that will always remain a mystery. 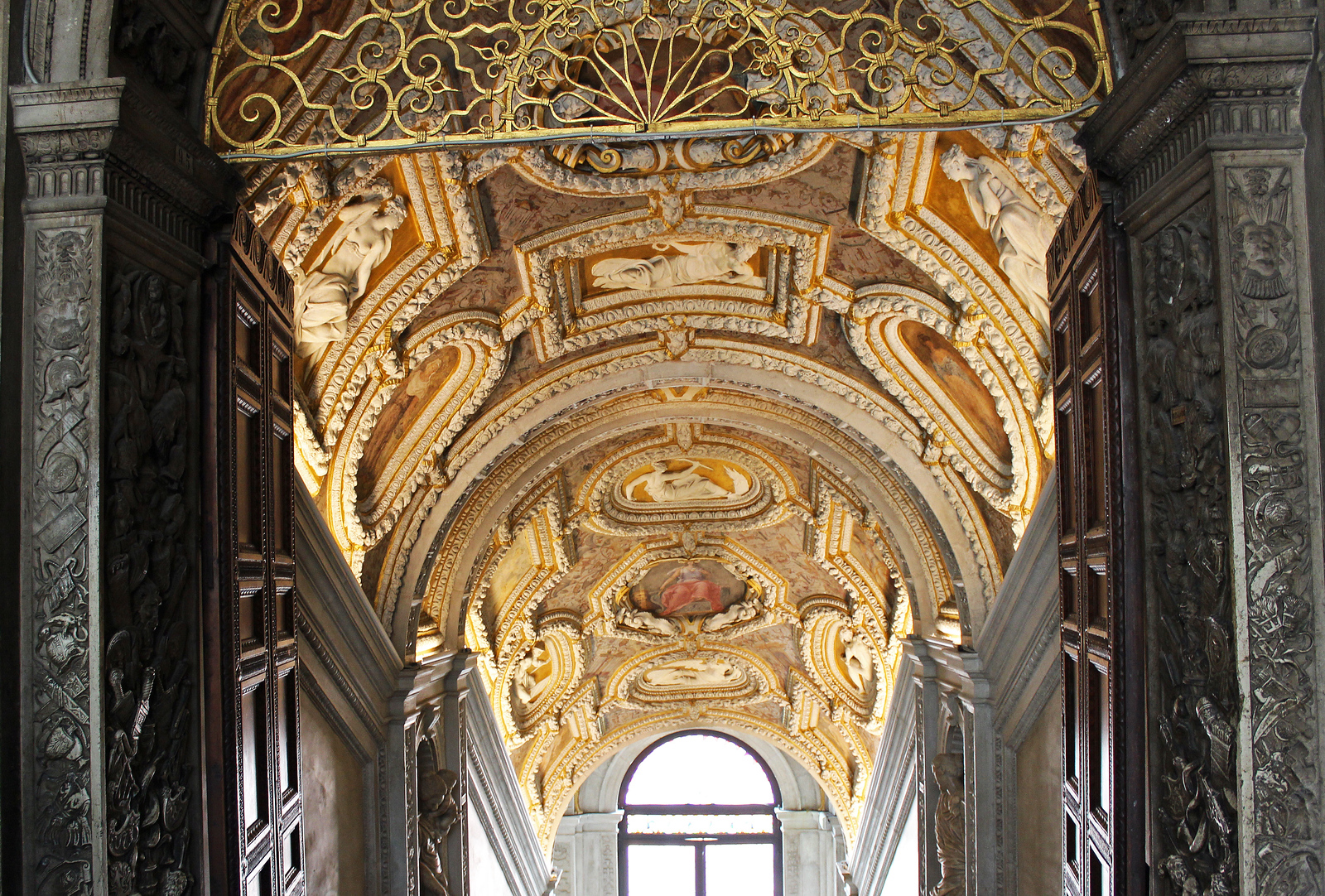 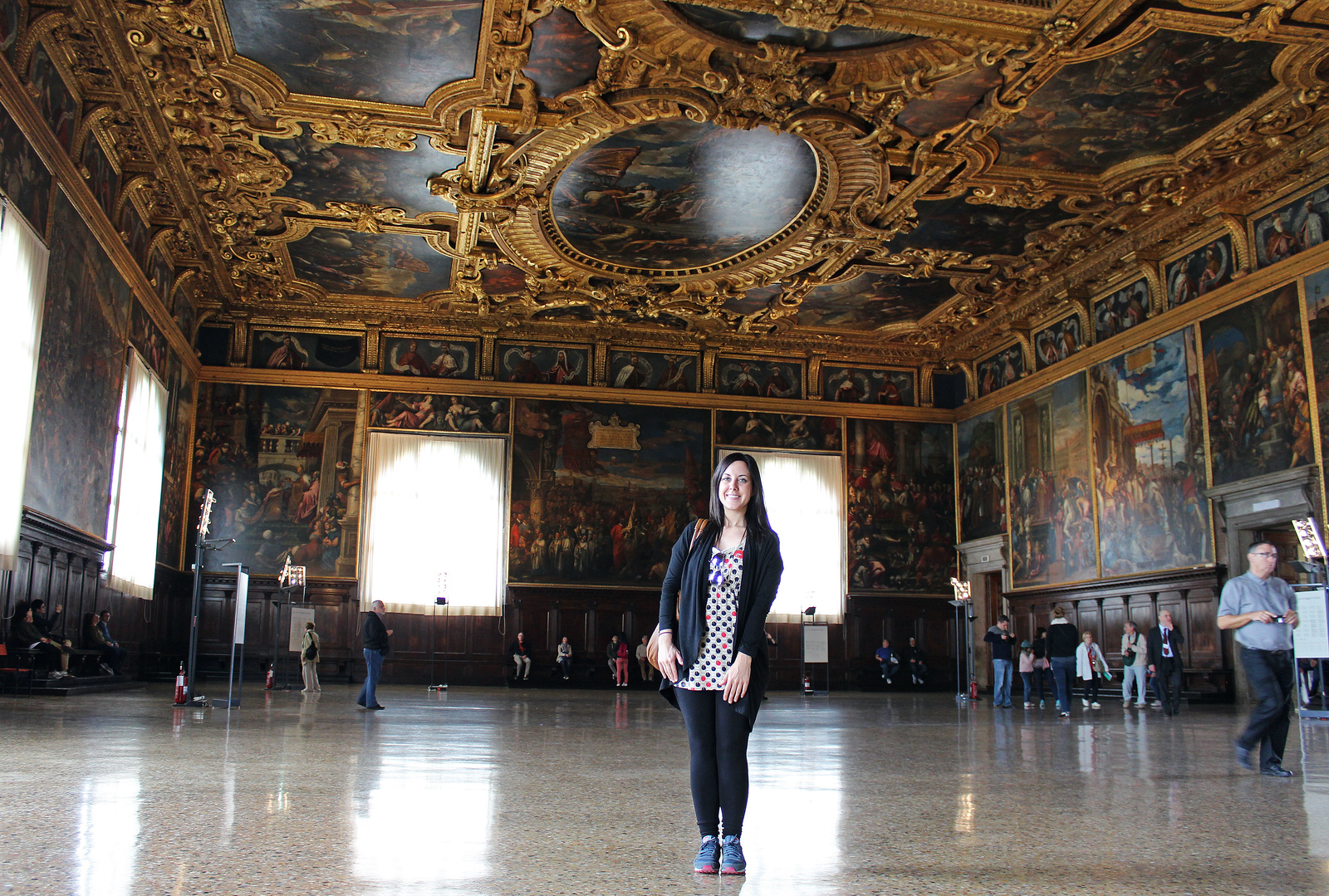 We thought this tour was very interesting and led by a highly educated guide. It was well worth the price of admission and it was really fun being able to view secluded places with a small group. Not really into history? You might not enjoy it. If you find yourself with a few days in Venice and you adore learning about what’s beyond the surface, I would book this tour!

Be sure to book in advance – all of the info is available here. Have you visited Doge’s Palace or Venice?