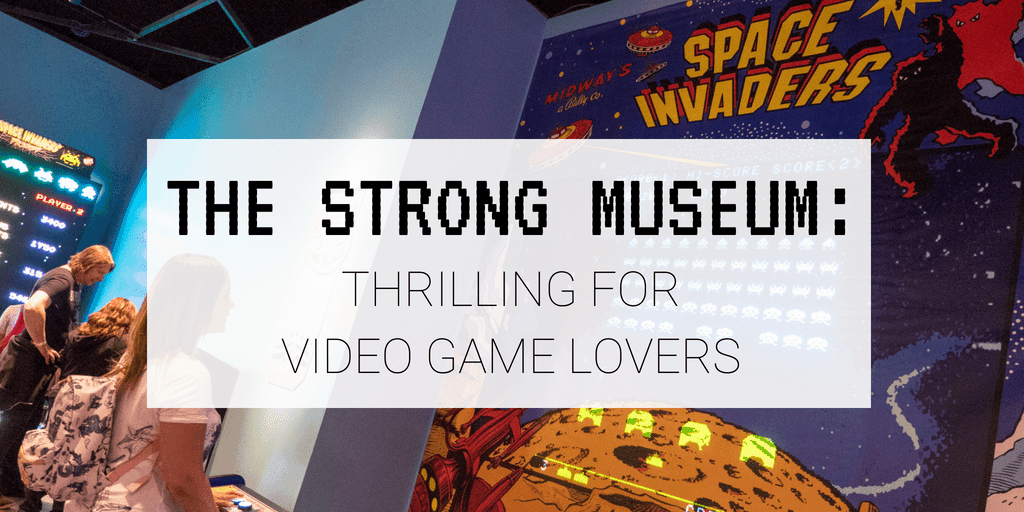 This post was sponsored by The Strong museum and SheKnows Media.

The Strong National Museum of Play isn’t just for kids!

Justin and I were driving back from Rochester, across the USA-Canada border towards our home near Toronto. We drove up to the little booth at the border crossing when it was our turn. The border guard asked us the usual questions, including how long we were away and what we were doing. Justin replied, “We visited The Strong National Museum of Play.”

The guard looked confused. He stated with conviction, “The Strong museum? Isn’t that…just for kids?” At that point, I barged into the conversation and rambled on about how we had such an amazing time there, without kids in tow. Yes, it’s a museum for kids, but it’s a museum devoted to everything relating to play. Why should adults have to give up playing? At what age in our lives should we stop playing?

While a substantial portion of the museum is directed towards kids of various age groups, there are many interactive exhibits that appeal to grown-ups, too. In particular, Justin and I were intrigued by their renowned video game exhibits. We adore video games, especially the classic ones. In fact, we seek out classic gaming opportunities when we travel close to home and across the pond.

At the museum, you’re able to play all of the games, making it one of the largest arcades in the United States. Here’s why The Strong museum is a thrilling place for both casual gamers and fanatics alike. 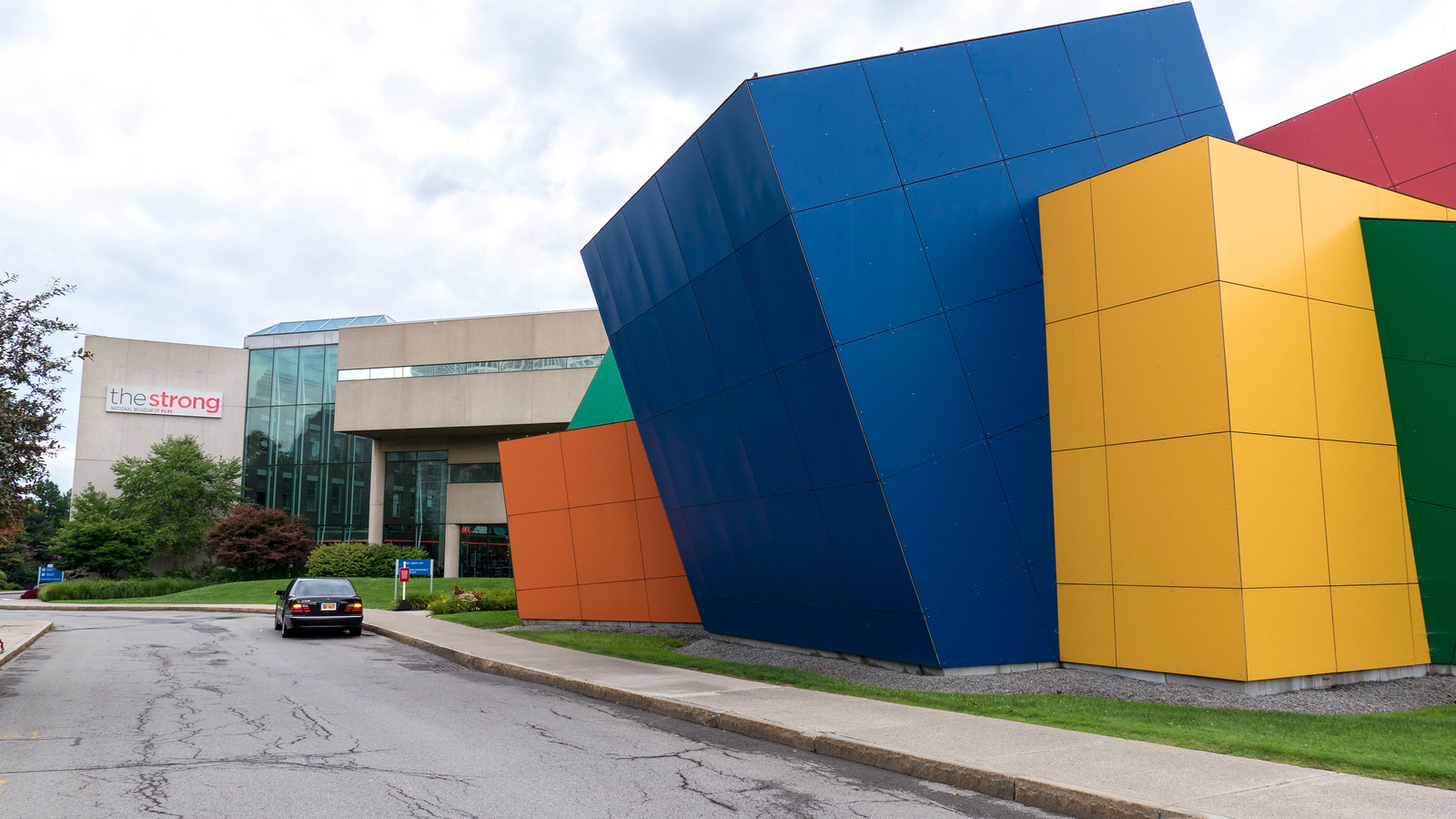 About the Strong Museum

The Strong museum is an interactive museum that promotes the exploration and history of play in both learning and human development. It’s a family friendly museum, and one of the biggest history museums in the United States. Guests of all ages are encouraged to examine, discover, and interact with the exhibits. It’s certainly the most fun, whimsical, and lively museum we’ve ever visited!

There are several facets of the museum:

If you’re a fan of video games, The Strong museum is the ultimate destination for you. Here are a few exhibitions, areas, and features that you need to discover.

International Center for the History of Electronic Games

The International Center for the History of Electronic Games collects and studies all electronic games and the ways in which they enable people to connect, learn, and play. The ICHEG has one of the biggest and most comprehensive collections of electronic games and related materials in the whole world.

The ICHEG showcases a massive electronic gaming exhibit at The Strong museum called eGameRevolution. Not only can you play and interact with many of the artifacts, you can learn about the history of gaming through sketches, handwritten papers, and prototypes. If you’re interested but aren’t able to get out to the museum right away, you can browse and learn about thousands of items in ICHEG’s online collections.

The Strong museum hosts the World Video Game Hall of Fame to recognize particular electronic video games that have a long lasting impact on society. Elected games must pass certain criteria: icon-status (well remembered), longevity (not only a fad game), geographical reach (popular around the world), and influence (the game had a profound impact on future games and the video game industry).

There’s a full list with detailed descriptions over at the World Video Game Hall of Fame website. A few notable inductees include: Donkey Kong, Pac-Man, The Legend of Zelda, Super Mario Bros., Pong, and The Sims. 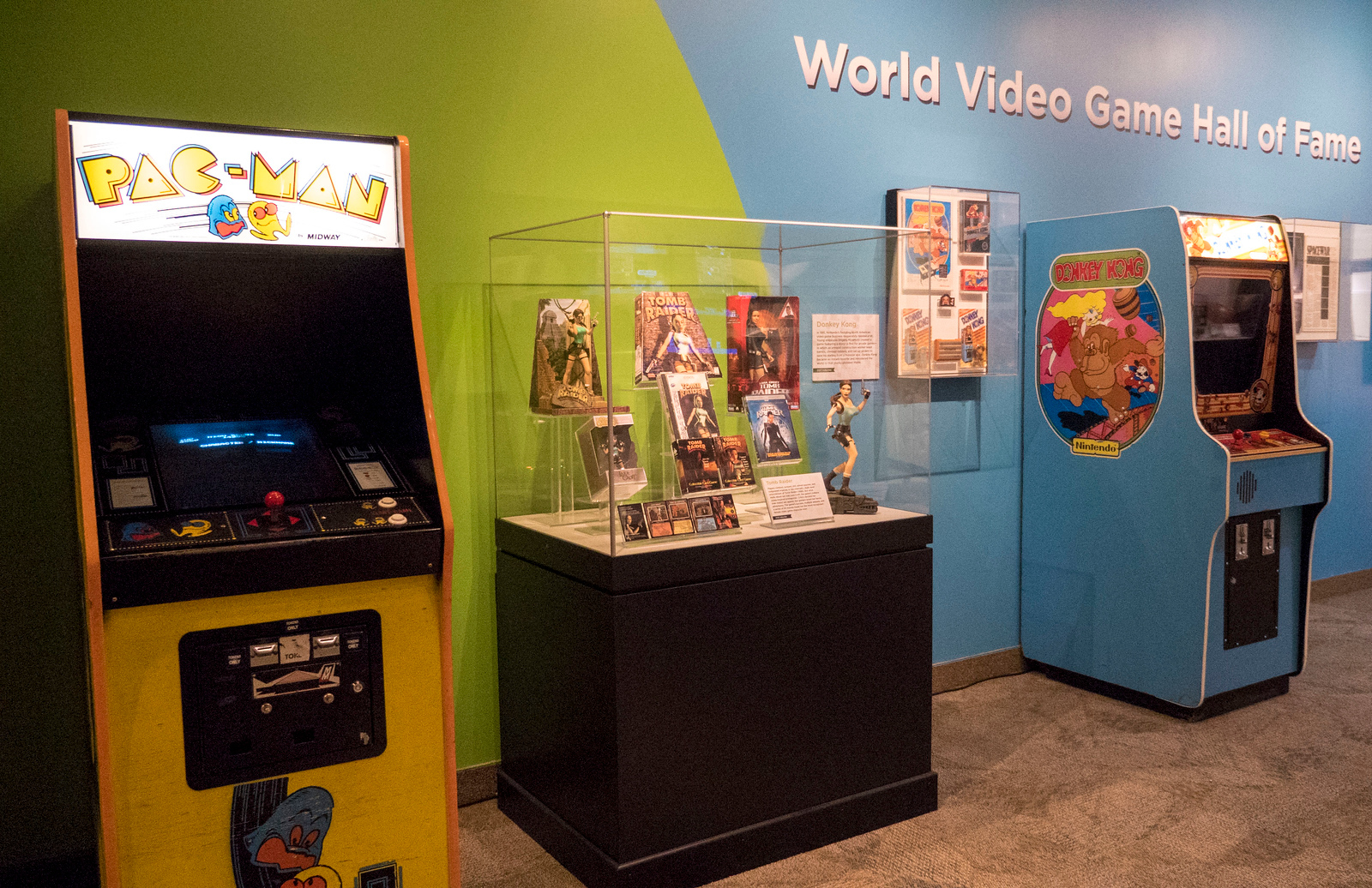 EGameRevolution is a gamer’s paradise! When we entered the room, Justin and I were greeted by the friendly faces of Pikachu and Link. We knew we were in the right place.

Before video games, there were mechanical arcade games. The eGameRevolution exhibit gave us the opportunity to check out a few of these predecessors. A couple of the mechanical ancestors of electronic games were behind glass, but we were able to play fan favorites like Bubble Hockey. 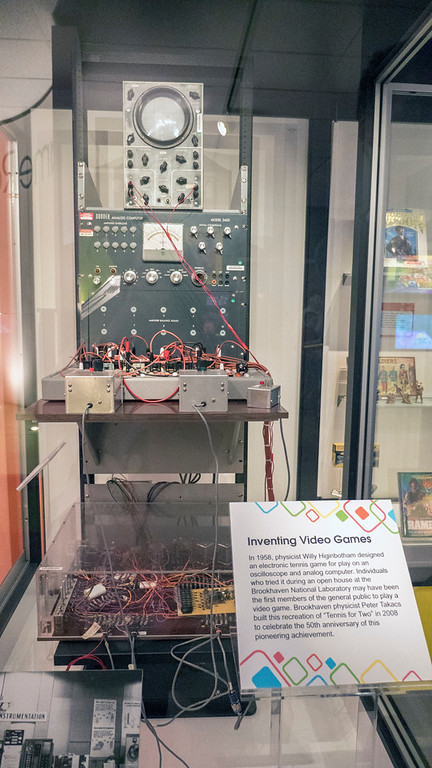 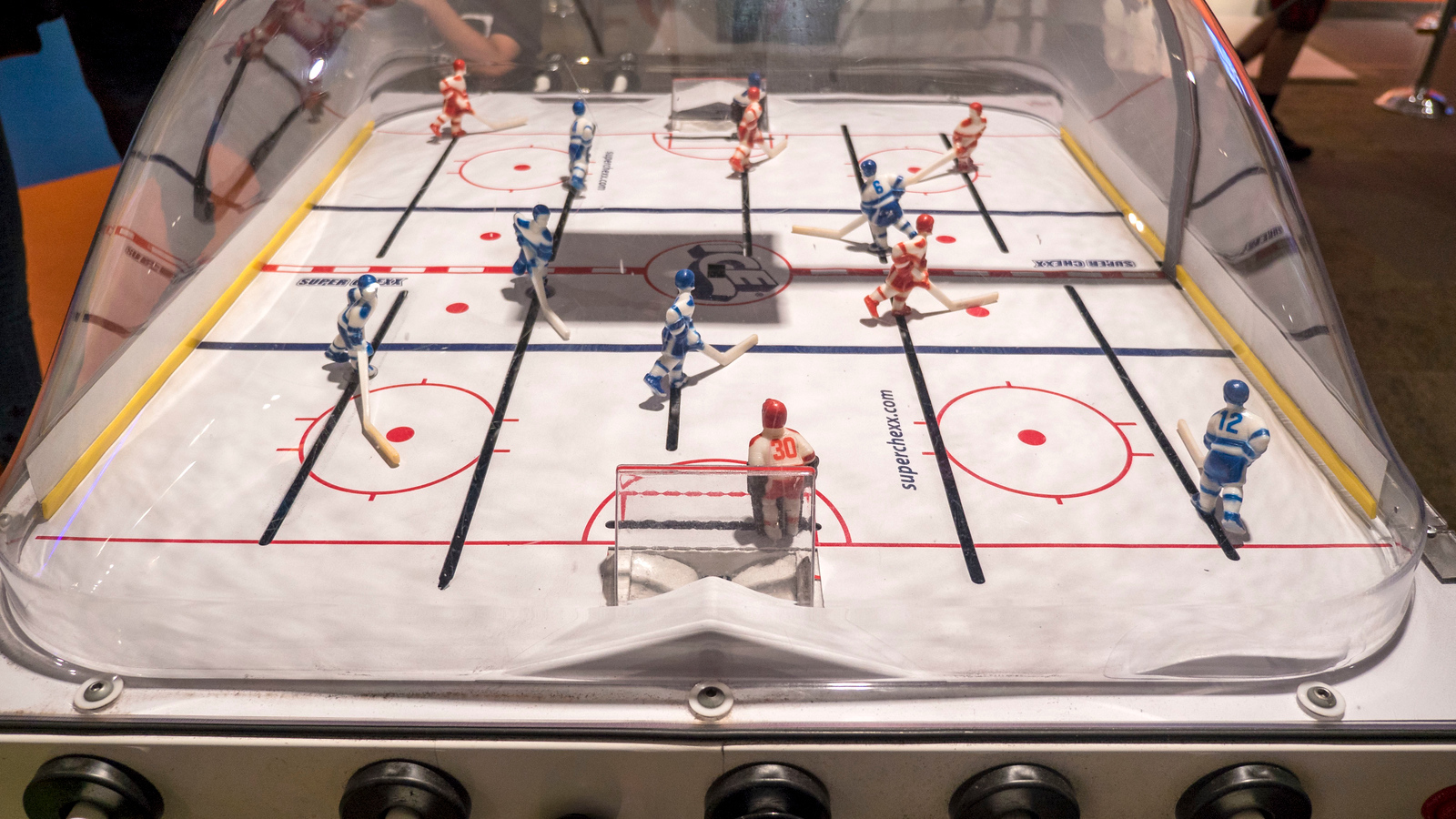 This interactive display, curated by The International Center for the History of Electronic Games, is fun for young and old alike. Play your way through the history of video games at eGameRevolution. A few of the games are free, but many cost one token (equivalent to 25 cents). The proceeds go towards the upkeep and repair of the games, which are kept in pristine condition. Some gaming highlights include: 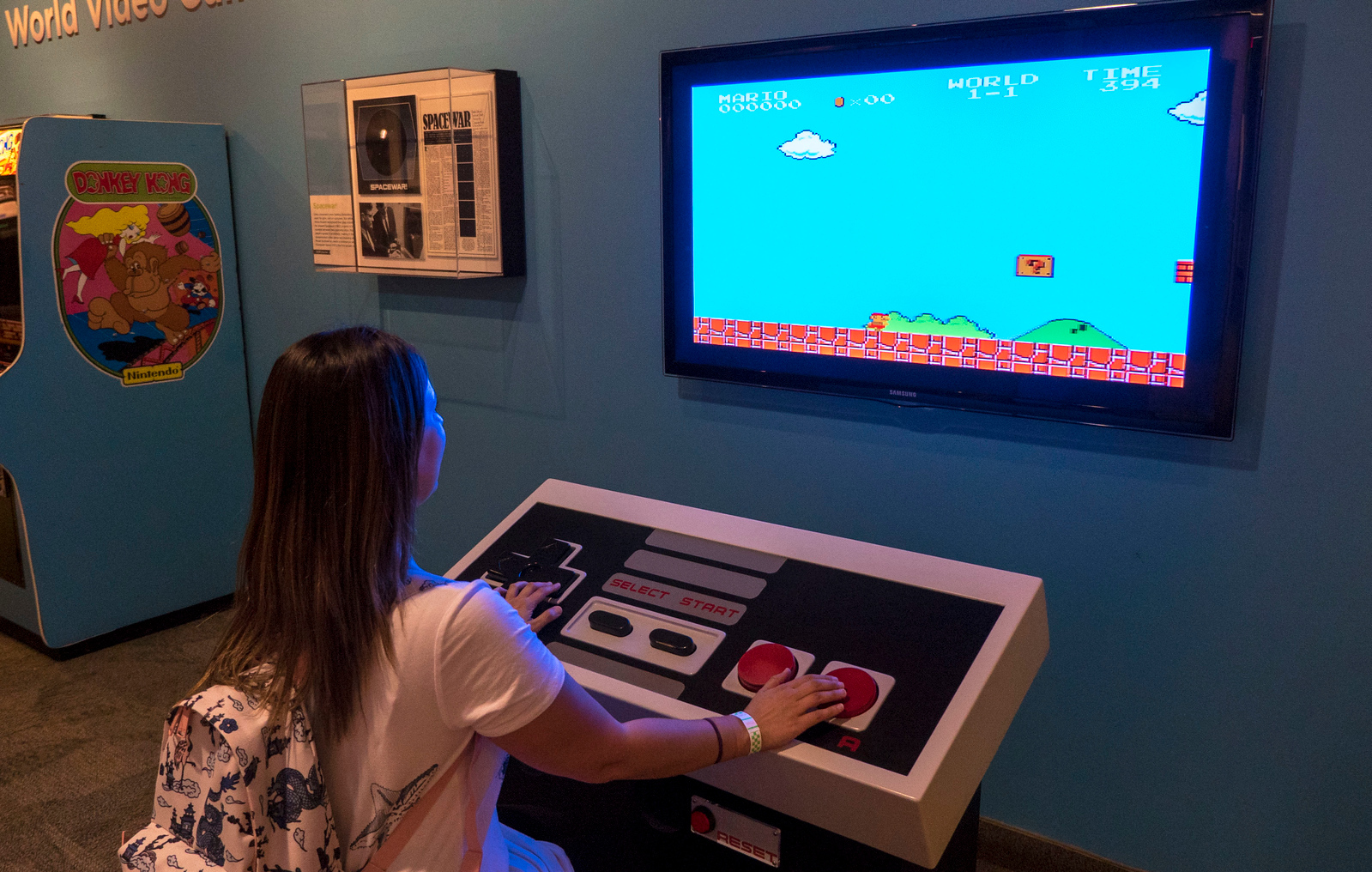 It isn’t just about playing games. We learned so much about the evolution of gaming from the displays around the room. EGameRevolution highlights how games started at universities and government computers, moved to arcades, and eventually into the home. Nowadays, it’s easy to find games in most households on consoles, computers, and phones. In addition, they had a super rare Nintendo World Championships NES cartridge, which is one of the rarest games for the Nintendo Entertainment System. There’s even commentary regarding violence in video games and its impact on society. 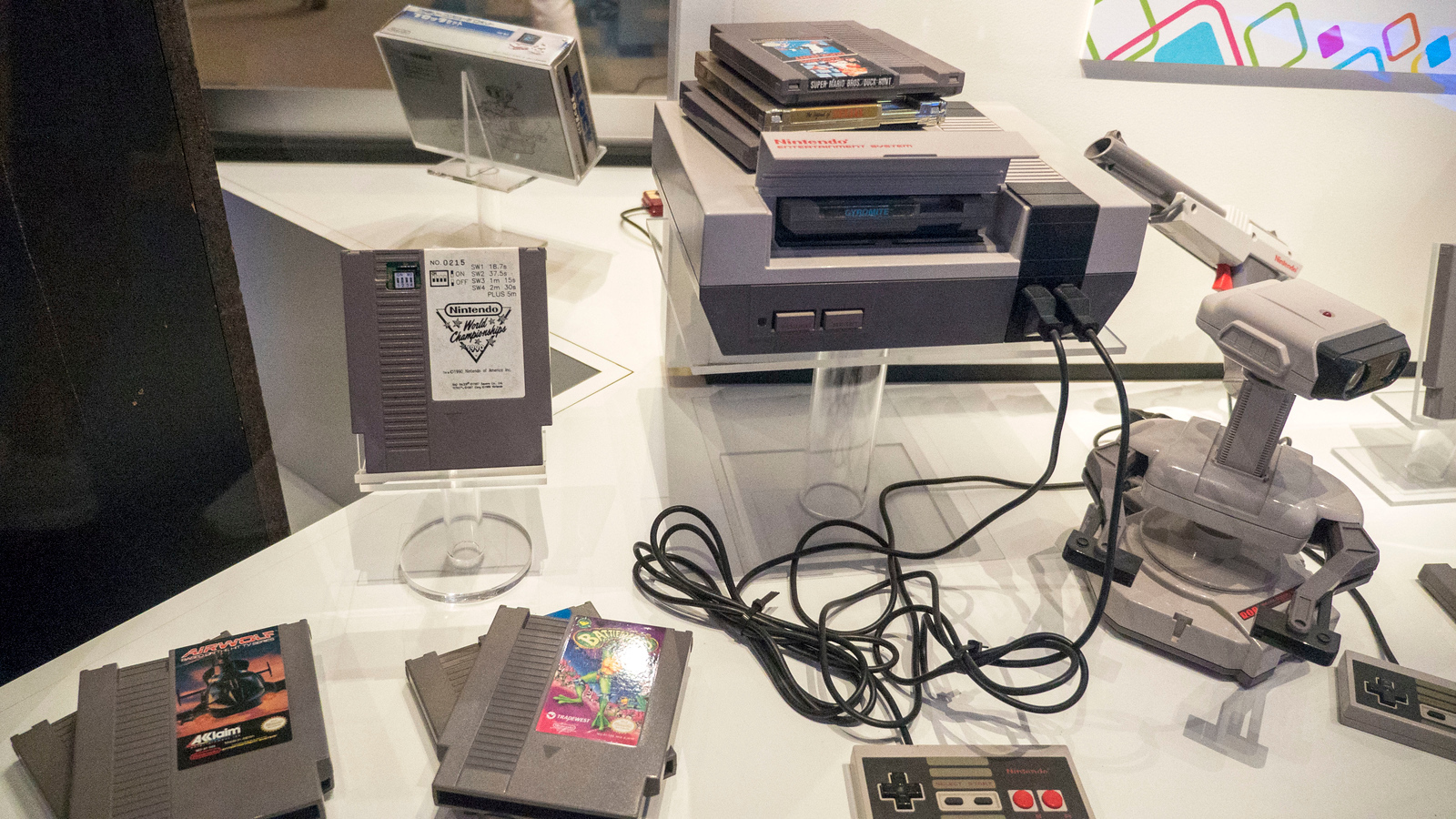 That’s not all! On the first floor, we stumbled upon Pinball Playfields, another exhibit featuring electronic games. This room showcases dozens of pinball games, ranging from early pinball machines to modern ones. Again, most of these only cost 25 cents to play, which is a total bargain. Justin and I bought $5 in tokens and they lasted our entire trip to the museum. It’s not expensive to play everything you’d like.

Some of the early pinball machines include Whiffle from 1931, World’s Fair Jigsaw from 1933, and Humpty Dumpty from 1947. Did you have any idea that pinball machines dated this far back? I had no clue! 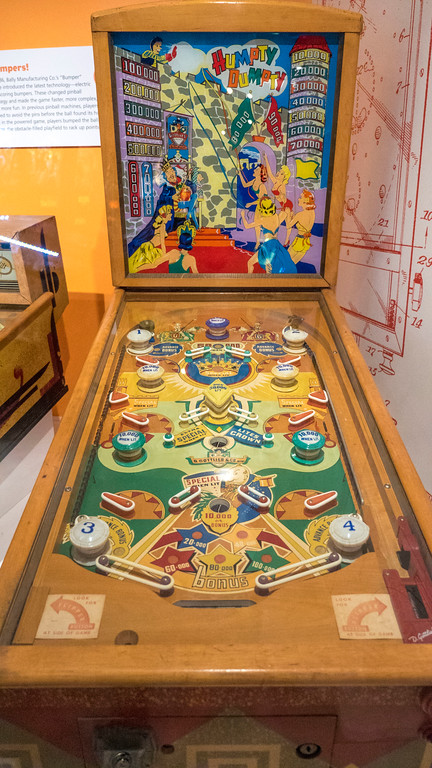 I was really excited to see one of my favorite pinball machines, Fun House. There are also more modern games, like Game of Thrones and Ghostbusters. You can see a full listing of the games that are currently in operation here. We suggest taking a stroll around Pinball Playfields and trying your luck at a few of them. Or…spend an afternoon playing pinball machines alone!

Check out our entire collection of photos from The Strong Museum of Play at our travel photo album.

If you’re looking for a fun day trip from the Toronto area or anywhere within a few hours of Rochester, definitely head out and play all of the video games! There’s a lot of other interesting exhibits around the building to visit if you’re an adult without kids, too. Check out the National Toy Hall of Fame for a healthy dose of childhood nostalgia. The American Comic Book Heroes display is a must for fans of comic books and comic book characters. There are many playful demonstrations that alter your perspective or encourage you to solve a particular puzzle with unexpected results. 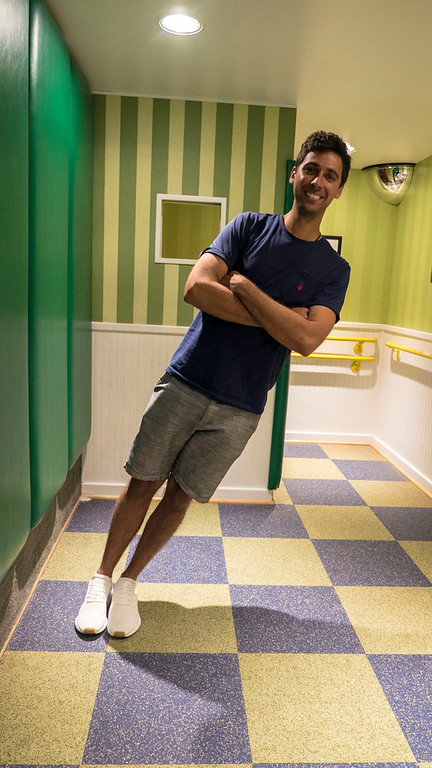 Justin and I thoroughly enjoyed our trip to The Strong National Museum of Play. We’d love to return sometime in the future as the museum has spectacular future expansion plans. We can’t wait to see these major transformations materialize. Furthermore, there are special events in the evening for adults, such as The Happiest Hour. It’s a fundraising event with a cash bar and access to play the arcade games. It sounds like a total blast, and we’d love to attend as part of an extended trip to Rochester.

We hope you’re able to make it to The Strong National Museum of Play someday, with or without children. It’s truly a space where everyone can play and have fun, no matter your age.