When the Ripley’s Aquarium of Canada opened in downtown Toronto a little over a year ago, many were excited that a new tourist attraction had arrived in the city. It was an interesting choice to place an aquarium in Toronto. Toronto really has no ties to tropical wildlife or the ocean – Toronto lies along the shores of Lake Ontario, a freshwater lake with an entirely different ecosystem. Many friends and acquaintances asked me, “So, when will you be going to the aquarium?” knowing that I am an animal and nature lover. There are many reasons why I’ll never visit the Ripley’s Aquarium in Toronto, and it is primarily because I am an animal and nature lover. Many of these reasons apply to aquariums beyond the one in Toronto and extend to ones you may encounter on your travels.

Wait…what’s this about trafficking? Don’t aquariums breed their own fish? Not necessarily when it comes to saltwater fish. Almost all the wildlife kept in saltwater aquariums is captured from coral reefs, with fewer than 5% bred in captivity. Over 11 million reef fish are taken from the oceans each year for aquarium hobbyists and the aquatic exhibits in places like Ripley’s Aquarium. According to the World Wildlife Federation, about 80% of these marine fish die before they are even sold. Out of the ones that survive long enough to be sold, about 90% of those fish die within the first year. The fish simply cannot handle the stress of capture and transport, or the stresses of living in captivity. It just isn’t natural. For every saltwater fish that you see swimming around at Ripley’s, at least eighty have died in its wake. From Right Tourism, “many species selected for aquariums have complex biological and social needs that can rarely be met in captivity.”

Now, the tropical fish industry is a huge money-maker and all for the sake of using animals for our own entertainment purposes. Fraud runs rampant and the numbers of fish that are actually taken from the ocean are often much higher than reported. The trade is valued at over 1 billion dollars per year. In a recent encounter, Sea Shepherd divers that were documenting wildlife trafficking in Hawaii were viciously attacked by fish collectors who were poking and prying sea creatures from the coral reefs. This truly demonstrates how far the collectors of tropical fish are willing to go, nearly murdering a diver in the process because they wished to continue their lucrative endeavors without being exposed.

Taking certain species of fish from their natural habitat affects everything else around it. Removing one kind of creature over another leaves the coral reef unbalanced. In Hawaii, many reefs are now threatened by algae suffocation for this very reason. In some cases, sodium cyanide is injected into coral reef to stun fish that are difficult to catch. This poisons the reef and more often than not, the fish itself. Coral reefs are vital to marine life in our oceans. Though they occupy less than 1% of the ocean surface, they are home to a quarter of all marine life. They are also extremely fragile, slow growing, and difficult to repair once they have been destroyed. Removing fish for aquariums is detrimental to our goal of preserving the Earth’s reefs.

The Toronto Aquarium provides no conservation benefits, though they incorporate many “greenwashing” elements to their mandate. From their site: “Ripley’s Aquarium of Canada aims to foster a culture of sustainability that supports the environmental and conservation goals of the organization and the greater public, while building a strong legacy of ecological stewardship.”  While they could potentially contribute money to a conservation organization like any corporation or any individual could (I’m not sure if they have), their actions clearly demonstrate that they detract from conservation efforts. They contribute to the destruction of coral reefs and ecosystems in their purchases of captured fish. Plus, there is no need for any breeding programs at aquariums, nor are any fish reintroduced to the wild. Aquariums simply do not help to prevent any species from becoming any less endangered or extinct.

Endangered sharks were taken from the ocean to be displayed at the Ripley Aquarium. Rare Sand Tiger Sharks (listed as endangered on the IUCN [International Union for Conservation of Nature] Red List) were removed off the coast of South Carolina for the sole purpose of being displayed in tanks at the Toronto Aquarium. Despite the fact that these sharks are protected in the United States, the aquarium received permission from the US government to hunt and capture them as they would be used for “educational purposes”. Predator loss is one of the top five threats to the oceans, according to Save Our Seas. More than 90% of the top predators have already disappeared from our waters, mostly due to overfishing. Predator removal has drastic effects on the entire ecosystem, through their regulation of prey populations and other cascading effects. The Sand Tiger Shark only produces two pups per litter and Ripley’s has removed some of the remaining Sand Tiger Sharks from their natural habitat, decreasing their numbers further. And for what purpose? Animal activist and photographer Jo-Anne McArthur writes, “Aquarium visitors spend a few moments looking at an animal in a given display. The animals spend a lifetime looking back at visitors, but can never leave.” These animals will never return to the wild. They will live out the rest of their shortened lives behind glass walls.

Touch tanks or touch pools are a part of many aquarium attractions, including the one in Toronto. In Toronto, visitors can touch crabs, stingrays and bamboo sharks in touch tanks. On top of the unnatural living experience in artificial tanks, the animals must now be subjected to humans touching them all day long. This can be extremely stressful to the animal. Furthermore, the animals can be exposed to all sorts of pathogens and foreign bacteria from humans. At another Canadian touch pool in Calgary, nearly 40 stingrays died from an unknown toxin in the water. Right Tourism recommends that you do not participate in touch tank programs, though I wouldn’t feel right contributing money to a company that promotes this practice.

The main argument for aquariums is that they are educational, particularly to children. While I have not visited Ripley’s Aquarium of Canada, Barry Kent MacKay of Zoocheck and Born Free USA did. While there was educational information on plaques provided by the tanks at the aquarium, MacKay stated that he observed very few people actually reading them, not even simply to identify the name of the fish. Despite observing artificial coral in the tanks, there was no information provided about the importance of preserving the real coral of our oceans. Though one exhibit featured fake mangrove roots, there was a lack of detail in reference to the importance of mangroves in our natural environment. There were so many omitted details about the importance of our ocean and protecting its creatures that MacKay doesn’t see how this aquarium could possibly be perceived as an educational experience.

While aquariums may have the appearance of being an educational experience, they are purely for entertainment’s sake. Many animals have abnormal behaviors when caged up in an unnatural manner as they are unable to exhibit their typical social structures and demeanor.

There is about as much educational benefit to be gained in studying [animals] in captivity as there would be studying mankind by only observing prisoners held in solitary.” -Jacques Cousteau

Another problem with aquariums is that it actually teaches our children the wrong outlook and attitude towards animals. In an interview with Humber News, Ken Montville (PETA) explains, “The problem with aquariums is that we all learn that animals are for us to exploit, and this is not a lesson we should be teaching our children. We can achieve true ocean conservation by cleaning up our oceans and prohibiting the live capture of animals to bring to aquariums.”

Ripley’s Aquarium of Canada doesn’t exist for conservation purposes. It doesn’t exist to be an educational experience. It is a form of entertainment that uses animals to make money. Not only is the cost high when it comes to the lives of the animals and our environment, but it also hurts our wallets. The admission price for an adult is $30, a youth or senior is $20, and a child is $10. To participate in a two-hour stingray experience, it costs $150 for an adult and $140 for a child. Ouch. By the time you factor in parking and a meal, it’s quite an expensive day. And don’t forget the gift shop, which likely has very little to do with environmentalism, oceanography, or marine biology!

In terms of an experience, I would much rather observe animals in their natural habitat. Many families from Toronto travel to tropical destinations in the winter – why not bring along the snorkel gear and swim with the fish? It would be more educational to put on the Planet Earth DVD or another wildlife program so your children can learn about these fascinating creatures without harming any animals in the process. You can also find many whale-watching excursions all over the world, some not even too far from Toronto in Quebec, where you can observe these majestic beings in the wild. It will be an experience that will last for a lifetime.

Unfortunately, this aquarium experience promotes the attitude that the world is at our disposal and we can put it behind glass, cage it up, and destroy it all for our own amusement. Since children are our future, why would we want to pass along these perspectives to them?

If you’d like to participate in opposing Ripley’s Aquarium in Toronto, be sure to join the Toronto Aquarium Resistance Alliance (TARA). There are regular protests outside of the aquarium to help increase awareness of its harmful actions and programs. 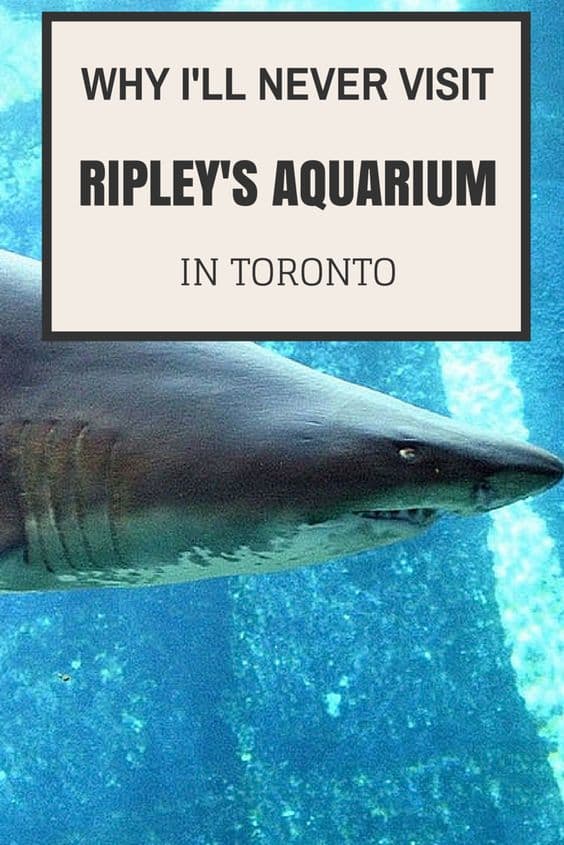 PIN this to your Pinterest board for future reference by clicking the top left corner.