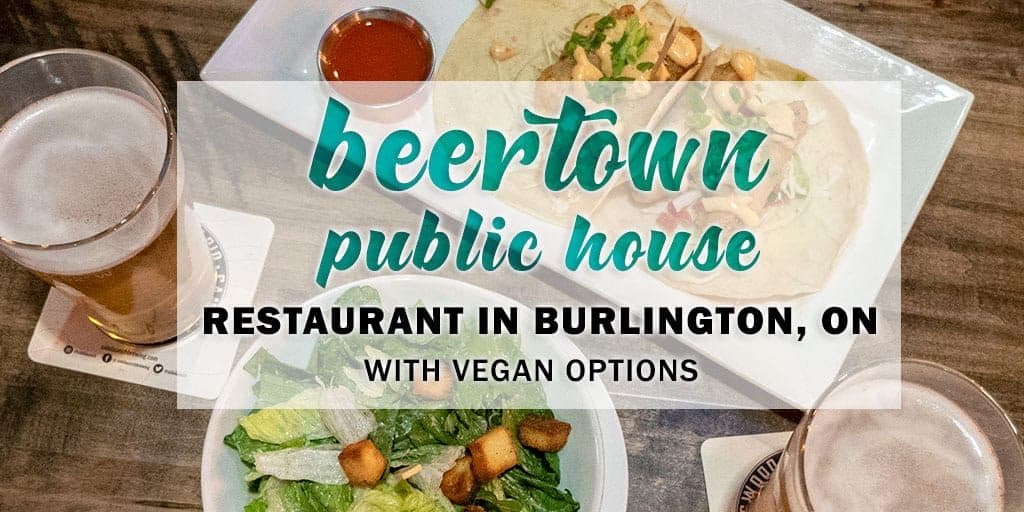 Restaurants in Burlington with vegan options are growing!

I’m always so excited to learn that restaurants in Burlington (and in general) are expanding their vegan offerings. Selfishly, I’m thrilled that I have even more places to eat and it’s much easier to dine while following a plant-based diet. Restaurant owners and chefs are growing to realize that it’s common to have at least one vegan or vegetarian in a group of friends. However, the vegan items aren’t just for the vegans in the crowd. So many people are trying various healthy living challenges, such as Meatless Mondays, Veganuary, Challenge 22, or others. Whether your motives are health, animal welfare, or the environment, there are so many reasons why people are trying a plant-based diet.

Even if you’re not ready or willing to give up animal products completely, I’m always excited when someone chooses a meatless meal. If the thought of ordering a vegan dish at a restaurant is a little outside of your comfort zone, don’t worry: Beertown Public House has a vegan menu that everyone will love. You’ll need to try it for yourself. Currently, Beertown Public House has four locations: Cambridge, London, Waterloo, and Burlington, Ontario, Canada (and you’ll find the vegan menu at every location). Out of all the restaurants in Burlington with vegan options, this one has by far the most extensive menu. 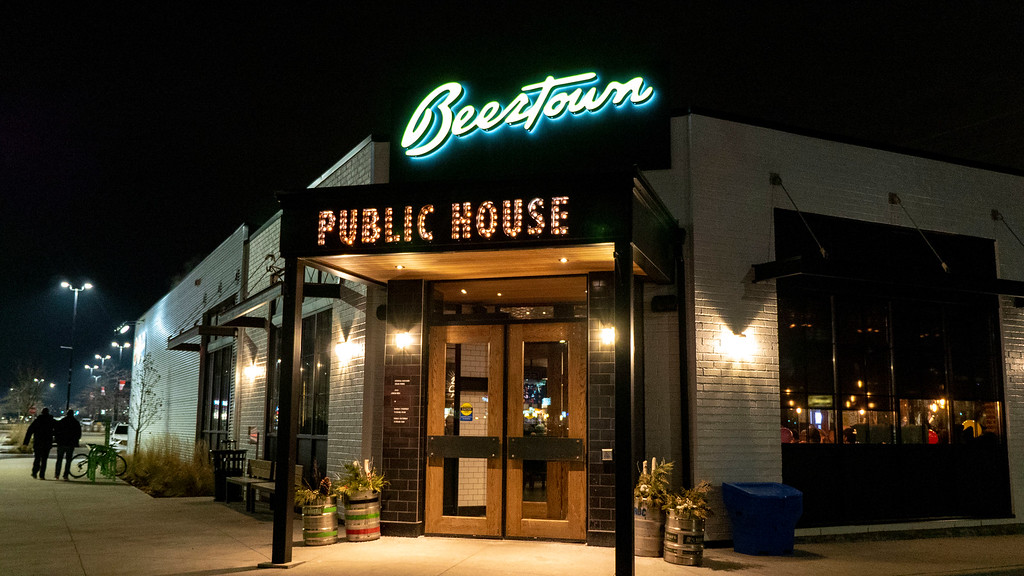 [kt_box opacity=”1″ background=”#23dae0″]Interested in why I’m vegan? Click here to learn all of my reasons and my personal story![/kt_box]

Let’s start with the menu itself. The vegan menu is independent from the regular menu, and it lists all of the plant-based offerings. There are over 15 choices, including appetizers, bowls, sandwiches, burgers, and even a kids menu. It was really difficult to narrow down what we wanted to order as everything looked so delicious. 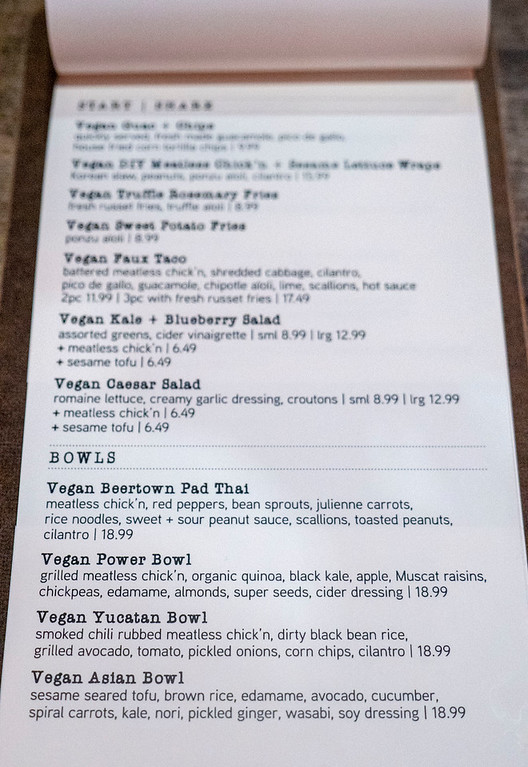 In addition to the vegan menu, there is a wide variety of beer, including many local craft brews. Justin and I each ordered one of our favorites, Side Launch wheat beer. If you’re not sure if a brand of beer is vegan, you can check the Barnivore website or even tweet the brewery for more information. 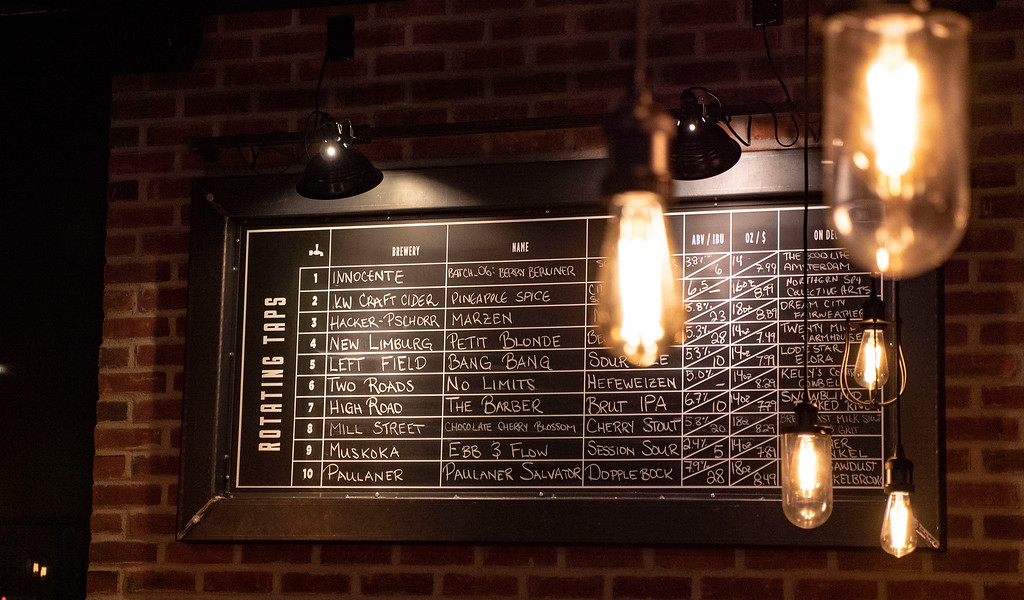 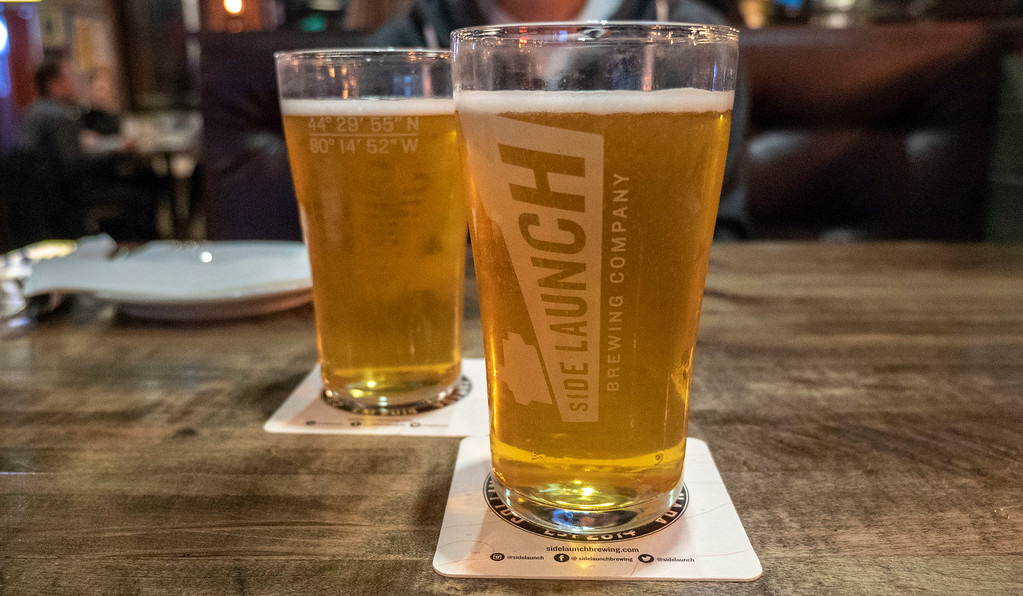 Justin and I ordered an appetizer each:

Our server (who also happened to be vegan!) raved about the tacos and she was right. They were crispy, a little bit spicy, and absolutely delicious. I could easily eat them every single day if I could. However, this was Justin’s appetizer and I only ate a couple of bites. My Caesar salad was super tasty and would rival any typical Caesar with animal ingredients. I loved the dressing and the homemade croutons were fresh and crunchy.

We loved how every vegan dish came with a little wooden stick to signify that they’re vegan. I’m sure there might be some confusion between the vegan meals and the non-vegan ones as you might not be able to taste the difference. There’s a little sign to verify that the meals are vegan, which is also a cute addition. 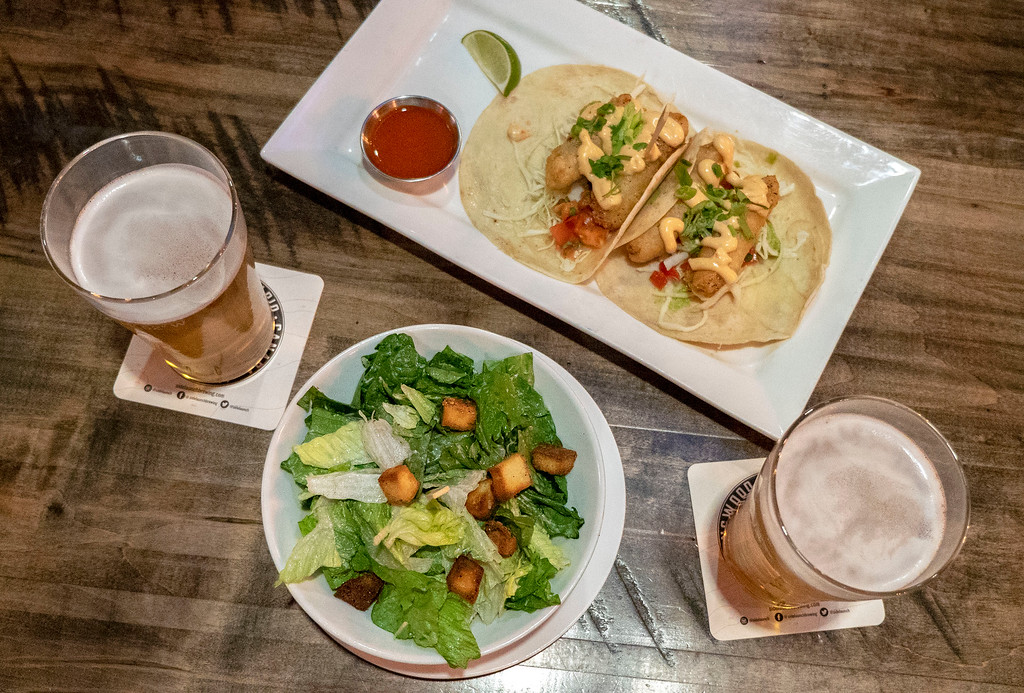 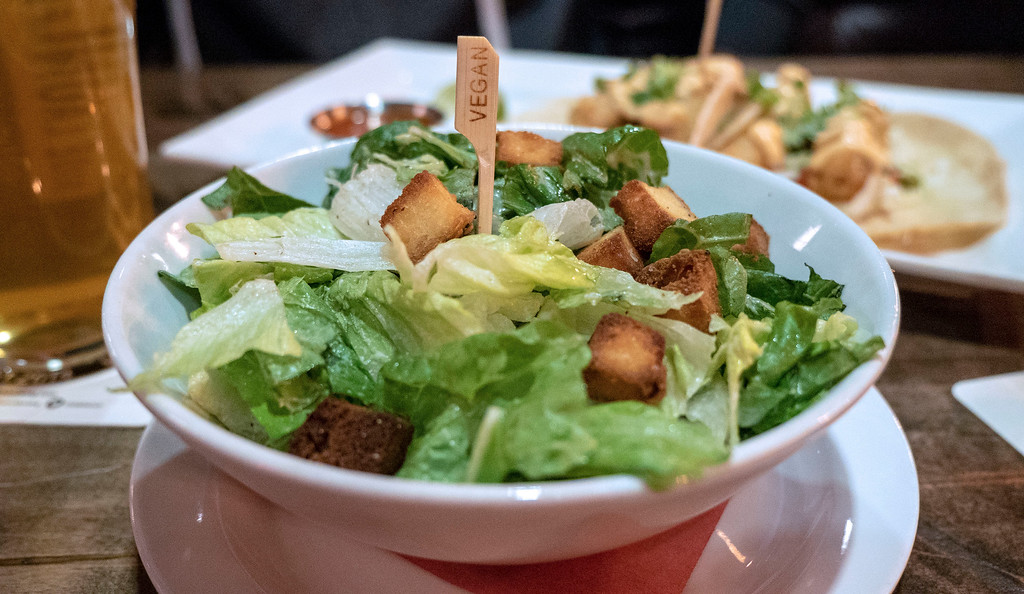 For the main course, we chose one bowl and one sandwich:

The burger came with a side of fries, too. The chicken patty was meaty and tasted great with the guacamole and garlic aioli. The melted vegan cheese was such a yummy addition, too. The Pad Thai was excellent. The chick’n strips were tender and hearty, and the sauce was delicious. The portion was pretty big, so I brought home some of the noodles to double as lunch the following day. 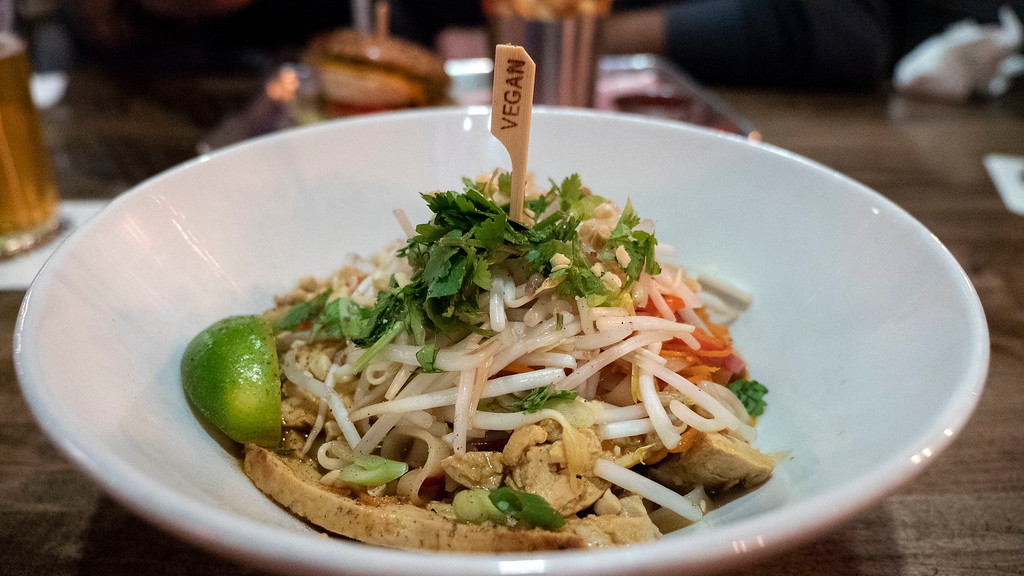 We thoroughly enjoyed dining at Beertown Public House, and it quickly became one of our favorite restaurants in Burlington. Our server and the wait staff overall were super attentive and helpful. It’s even better that our server happened to be vegan and was super enthusiastic about the menu.

Even though Beertown Public House isn’t a fully vegan restaurant, it was so easy to order from this exclusive vegan menu. I love how there is a separate vegan menu and the vegan meals have obvious labels. Even when the food reaches your table, it’s clearly labeled and reads ‘vegan’ so there isn’t any confusion.

There’s only one thing that I would change about Beertown Public House, one of the best vegan-friendly restaurants in Burlington. There weren’t any vegan desserts! Well, there was one sorbet, but that was it. While I appreciate that there was a sorbet, that’s the equivalent of being served a bowl of fruit. Both fruit and sorbet are yummy, but it’s not the same as a real dessert. Give me a piece of cake, a brownie, or an ice cream sundae! Just as your vegan meals are on par with your meat ones, let’s do the same with dessert.

If a truly vegan dessert were added to the menu, the dining experience would be taken to the next level. There are some local vegan bakeries in town, so it’s very possible to source vegan desserts if you don’t want to bake your own. With that said, I highly recommend that you visit Beertown Public House as it is one of the best places to eat in Burlington. 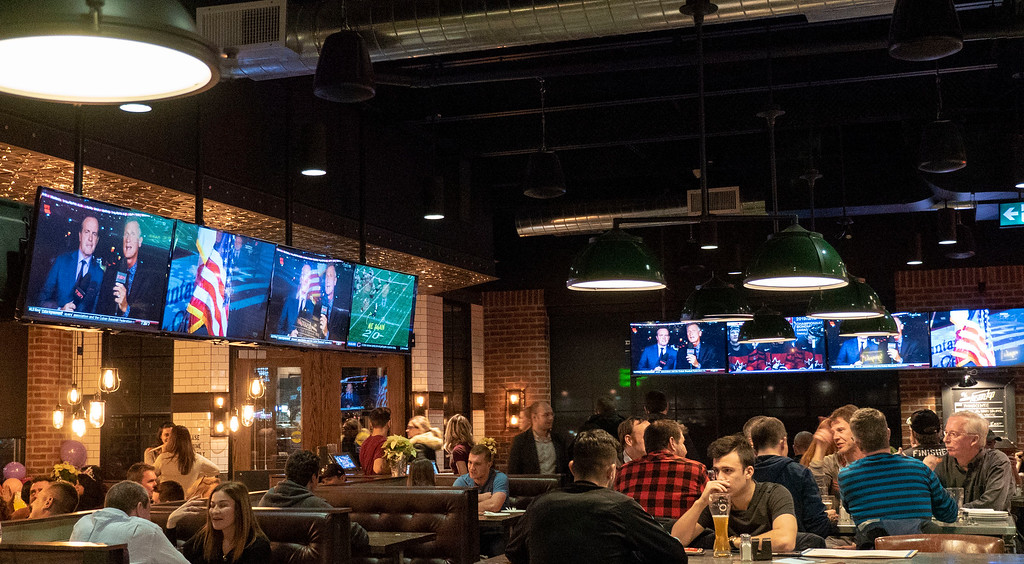 It was a packed house when we visited. Even though the restaurant was a little bit loud, this is the perfect place to host larger gatherings and parties, as well as date nights. I’m already thinking of having a birthday dinner here next year, simply because there’s something for everyone. The menu pleases those who follow a vegan or vegetarian diet, a gluten-free diet, and those who want a meat dish from the regular menu. 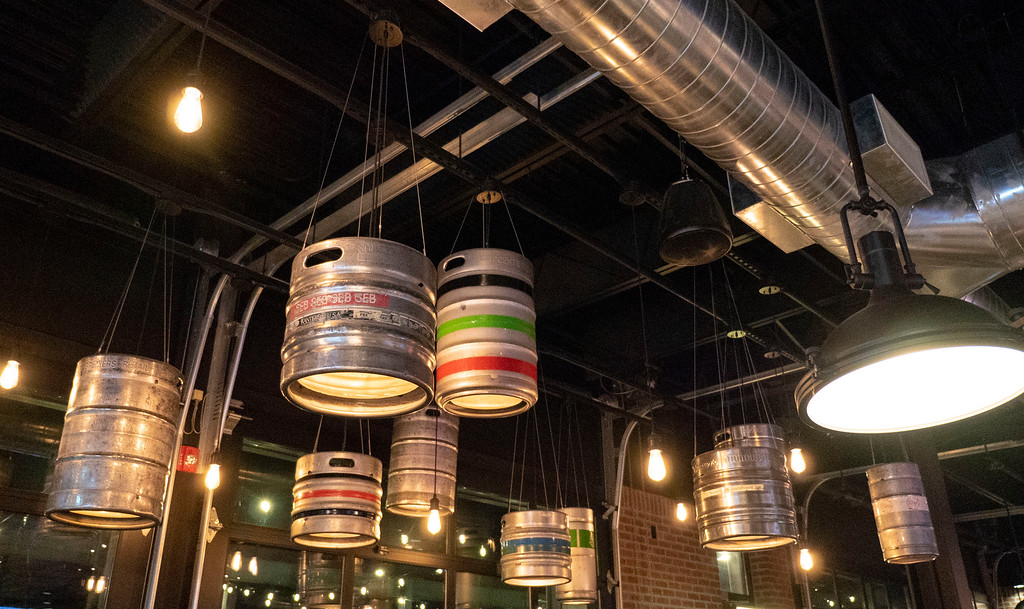 If you’re a meat eater, vegetarian, vegan, or follow a gluten-free diet, Beertown Public House has you covered. There’s something for everyone. I urge you to try the new vegan menu, even if you aren’t vegan yourself. Plant-based meals are so delicious, and these ones go above and beyond to please every palate. Be sure to check out Beertown Public House if you’re visiting Burlington, Cambridge, London, or Waterloo, Ontario. It’s soared to the top of my list of favorite restaurants in Burlington, and I can’t wait to try some other dishes on the menu. 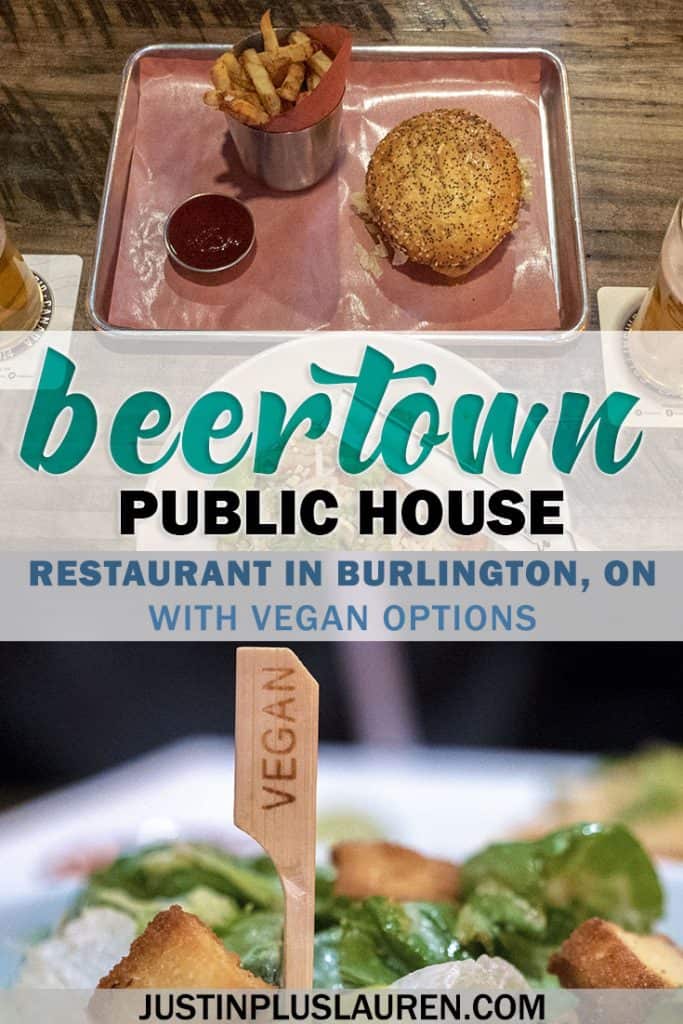 What’s the best vegan meal you’ve ever had?

174 shares
Burren National Park: Walking in the Burren for Desolate Irish Landscapes
← Previous
How Travel Can Expand Your Comfort Zone (Even if it Scares You)
Next →
Click here to cancel reply.