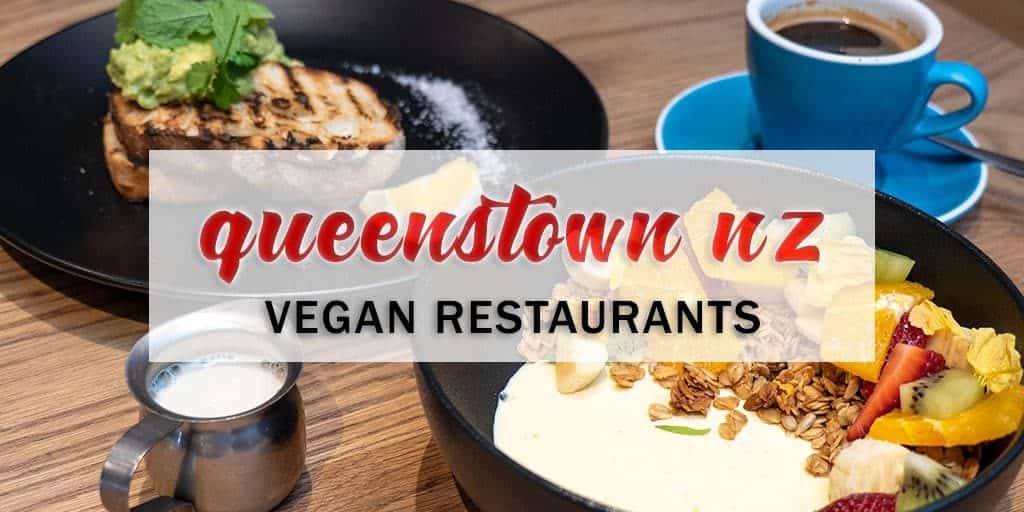 The best vegan and vegetarian meals in Queenstown, New Zealand.

I’m always on the search for the best vegan food. As a vegan traveler, this generally involves researching restaurants ahead of time to make sure I get to eat all of the best veggie meals. Queenstown was even more vegan-friendly than I originally imagined. I figured that it could be a possibility that I’d only find vegan restaurants and menus in Auckland. However, this wasn’t the case at all as I found vegan food all over New Zealand. Queenstown was no exception!

Whether you’re seeking breakfast, lunch, dinner, snacks, or coffee breaks, there are so many vegan restaurants in Queenstown. Most of the restaurants aren’t purely vegan, but are very vegan-friendly with separate menus or the choices clearly marked. Even though we only spent about a day and a half in Queenstown, we ate very, very well. If you’re looking for things to do in Queenstown, check out our 1 day Queenstown itinerary.

Without further ado, here’s our guide to Queenstown vegan restaurants and dining options so you won’t go hungry.

Queenstown Vegan: Lord of the Fries 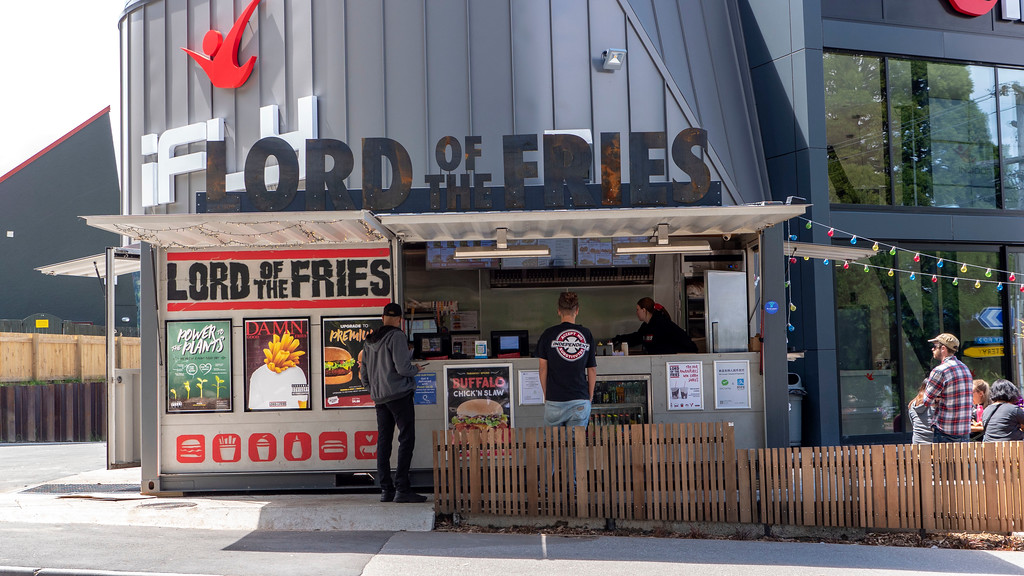 It’s the only Queenstown vegan restaurant that we visited and it’s not the healthiest in the world (but healthier than its meaty counterpart). Lord of the Fries (27 Brecon Street, in front of hte iFly building) describes themselves as an “ethical fast food restaurant” and it originates out of Australia. They have locations across Australia and New Zealand. This vegan Queenstown restaurant is right near the Skyline Queenstown location overlooking part of the town. I recommend stopping for lunch there on your way to the Skyline gondola. Fun fact: One of the owners actually comes from my neck of the woods – Toronto!

Their menu consists of their famous fries, burgers, hot dogs, veggie nuggets, onion rings, vegan fish, shakes, and even breakfast offerings. Justin ordered a Chick’n Burger (vegan cheese, lettuce, mayo, mustard) and I got the Chicago hot dog (crunchy pickle, relish, peppers, mustard, and celery salt). Obviously, I love places where we can order any item off the menu. Plus, it was difficult to choose here because everything sounded delicious. In the end, we made excellent choices because the food was satisfying and flavorful.

Bespoke Kitchen Queenstown (9 Isle Street) was our first meal in the city. It was after we took three flights (Toronto to Los Angeles, Los Angeles to Auckland, Auckland to Queenstown) and we were pretty much dead to the world. Feeling as though we should eat before crashing at our hotel (in combination with the fact that our room wasn’t ready yet), we fumbled our way over to Bespoke Kitchen for a meal. We easily could have eaten breakfast, lunch, or dinner at that point. Our internal body clocks were completely turned upside down. As it happened to be somewhere around breakfast and lunch time, having brunch at Bespoke Kitchen was a fantastic idea.

The menu at Bespoke Kitchen rotates according to what’s in season. So, what you see here might not be what you get. Fortunately, they have several vegan options clearly marked on their menus. I’ll post a picture of our menu at Bespoke Kitchen so you can take a look. You order up at the counter and someone will bring your food to the table. Justin decided to take his meal for takeaway, while I dined at the restaurant. 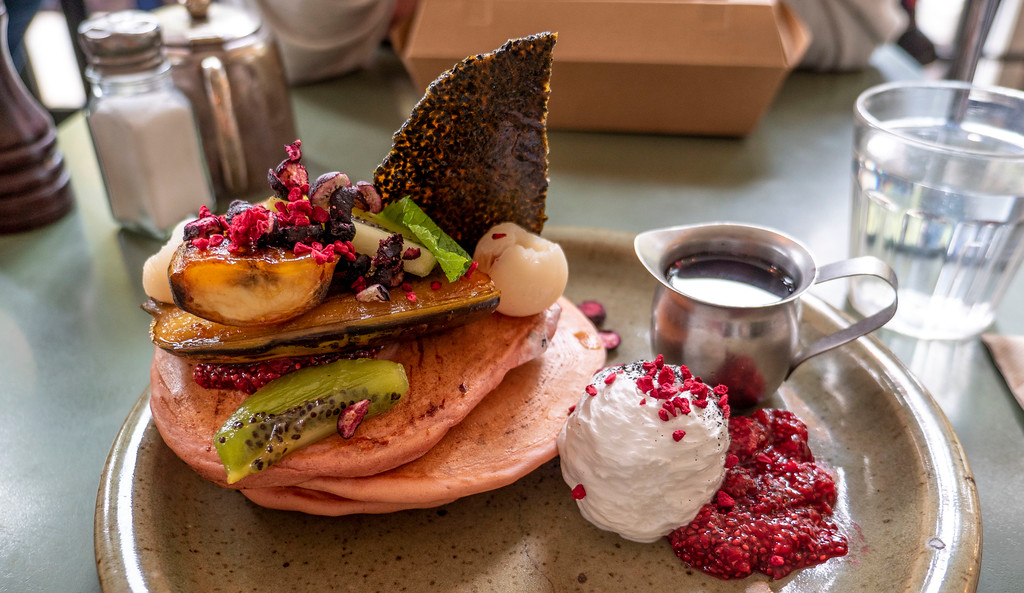 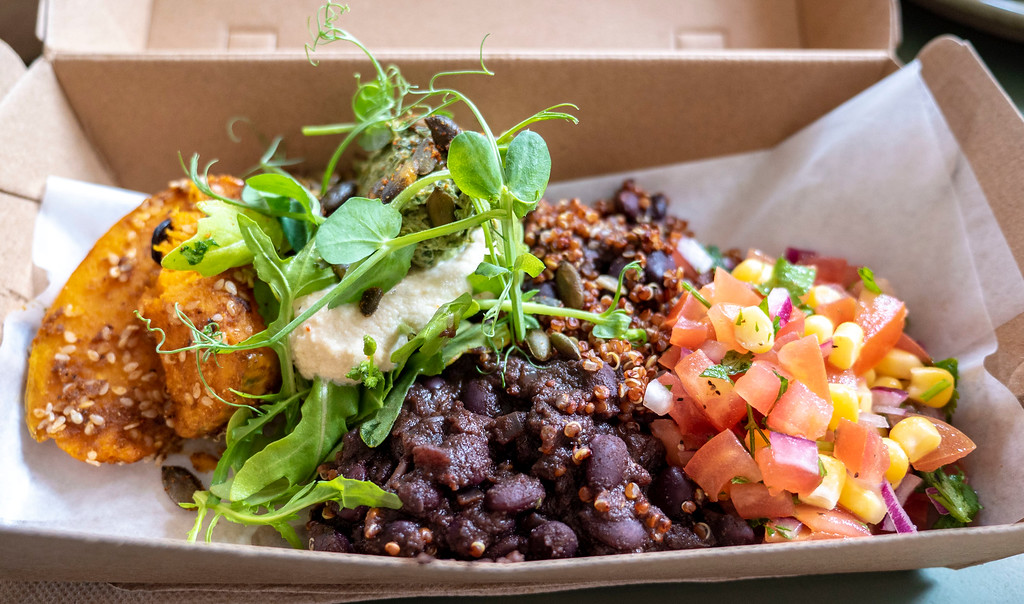 Bespoke Kitchen also has a fantastic selection of vegan desserts and treats. We couldn’t resist taking a couple of the chocolate raw Twix bars with us. Also, there are daily salads and vegan bagels if you’d like to grab something on the go. Even though Bespoke Kitchen wasn’t an entirely vegan restaurant, they had some of the best vegan food in Queenstown. 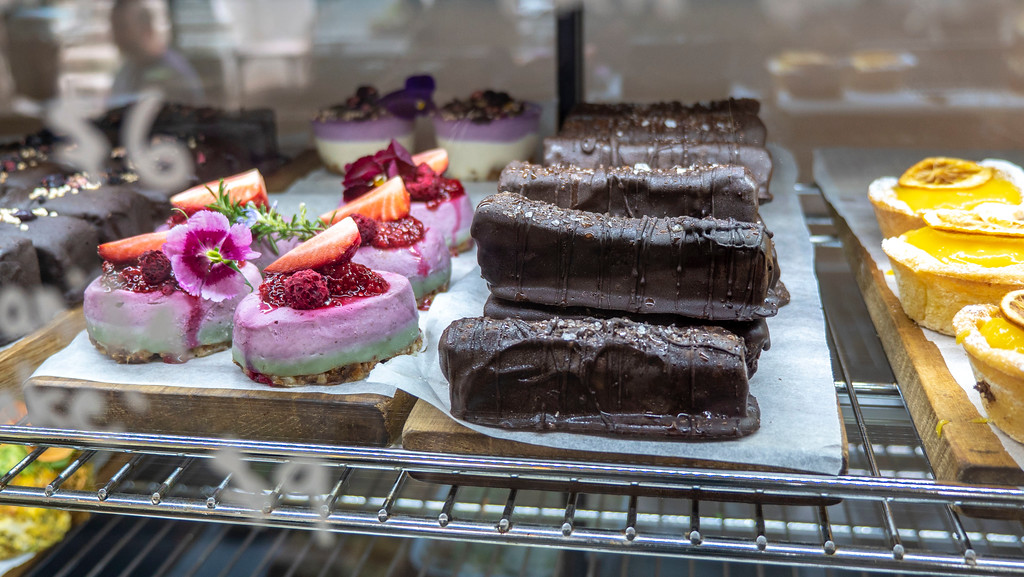 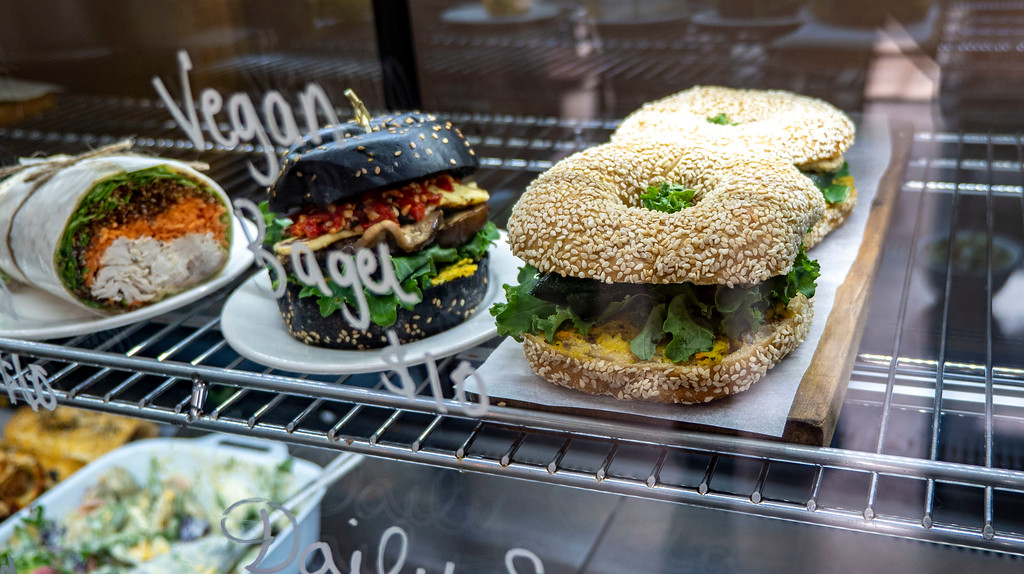 After we slept for hours and hours, we managed to ditch the jet lag (for the most part) and explore Queenstown for the day. Our first stop of the day was Yonder (14 Church Street) for their brunch menu. The inspiration for Yonder’s menu comes from worldwide travels. Their other primary focus is catering to various dietary restrictions, so they have plenty of vegan, vegetarian, and gluten-free choices. If you have a particular allergy, don’t hesitate to mention it to a staff member as they’ll help guide you to an appropriate meal.

The meals are marked as vegan or show that there’s a vegan option available. I ordered an interesting dish that I’d never tried before, the Granola with Passionfruit Panna Cotta with Fresh Fruit (toasted oats and seeds, sliced almonds, coconut, dried cranberries, passionfruit panna cotta, seasonal fresh fruit, and a choice of plant-based milk). Justin got the Smashed Avocado on Toast (smashed avocado on house ciabatta, lemon, herbs, sea salt). I also made sure to order a long black, as I feel that coffee is always a necessity at breakfast. 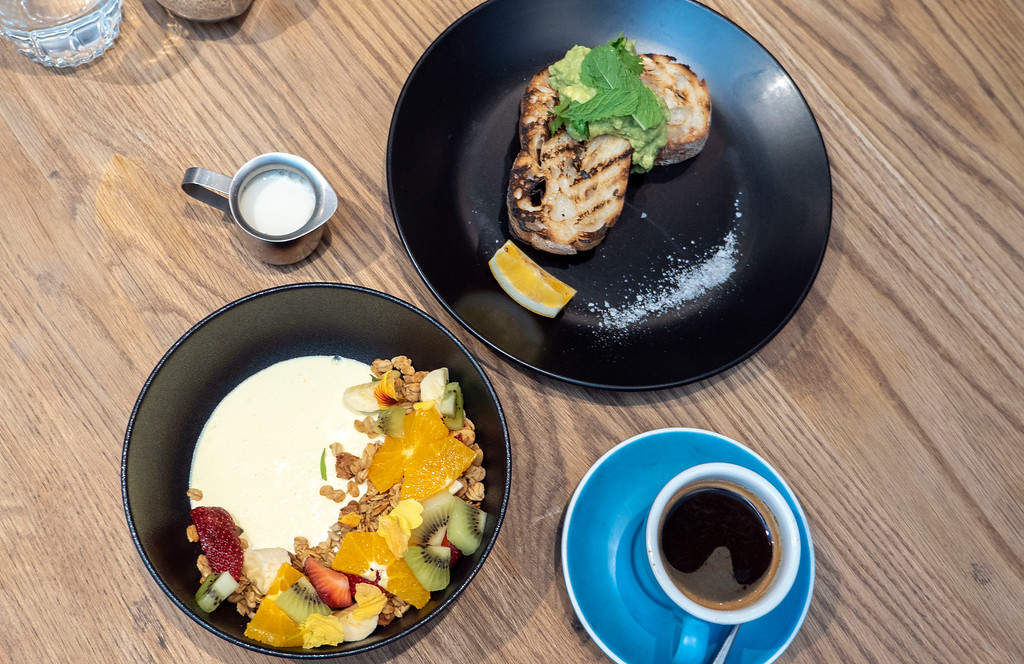 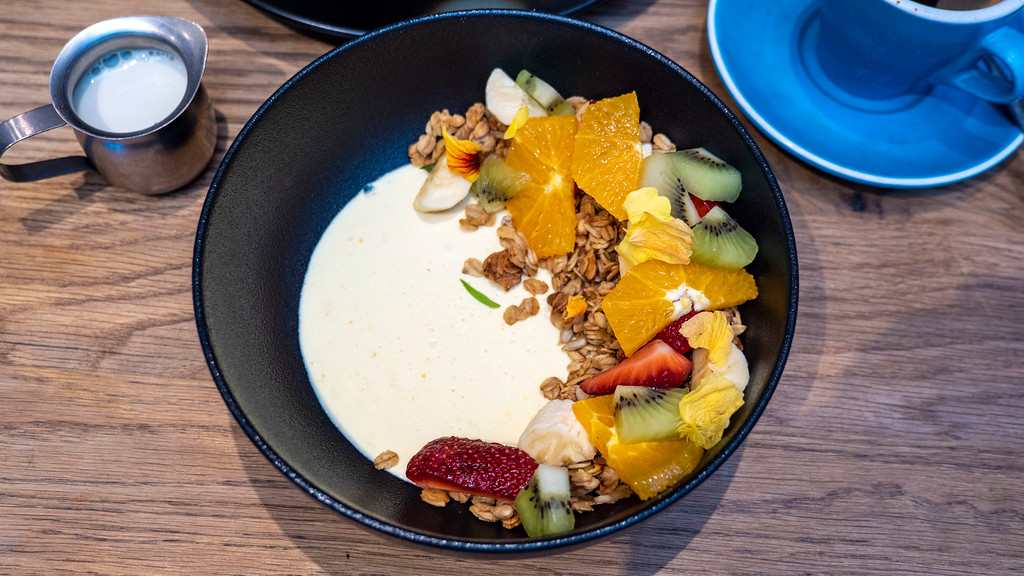 Yonder has a wonderful patio out front, but we decided to dine indoors where the decor was equally as lovely. There were also some vegan chocolate chip cookies at the front of the shop. It was very tempting, but I was thoroughly full after my breakfast and knew that I was going to dine at many more vegan Queenstown restaurants that day. 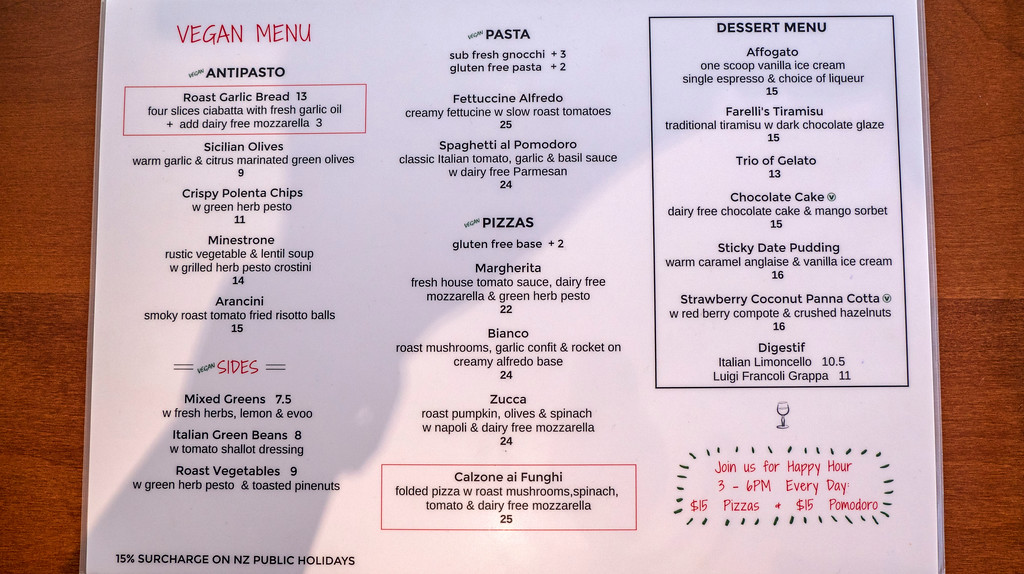 Farelli’s Trattoria (Steamer Wharf Complex, 88 Beach St) was such a delightful surprise. It’s a traditional Italian restaurant that also happens to have a whole separate vegan menu. Not only that, but the vegan menu is a part of the regular menu and takes up almost an entire page. There are so many options, from starters to mains to sides. There’s even a vegan dessert, too!

Justin opted for a vegan pizza, the Bianco (roast mushrooms, garlic confit, and rocket on creamy alfredo base) and I got the fettuccini alfredo pasta. Both of our plant-based meals were so yummy and filling. It’s rare to find a vegan creamy sauce at a non-vegan restaurant, which is probably why we both ended up ordering it on our pizza and pasta. Don’t hesitate to stop at Farelli’s Trattoria when you’re looking for vegan food in Queenstown. 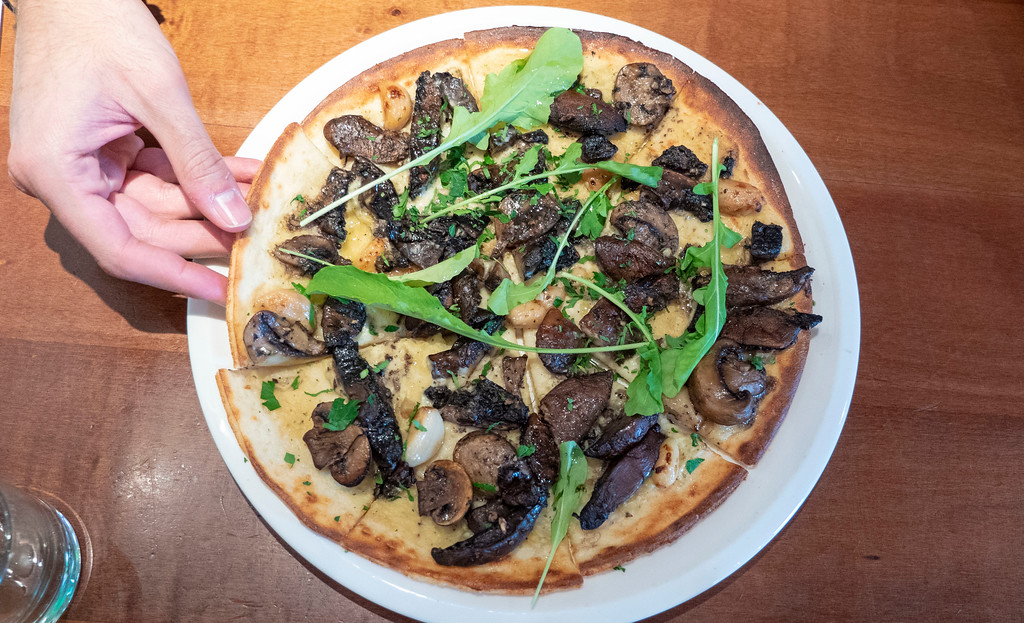 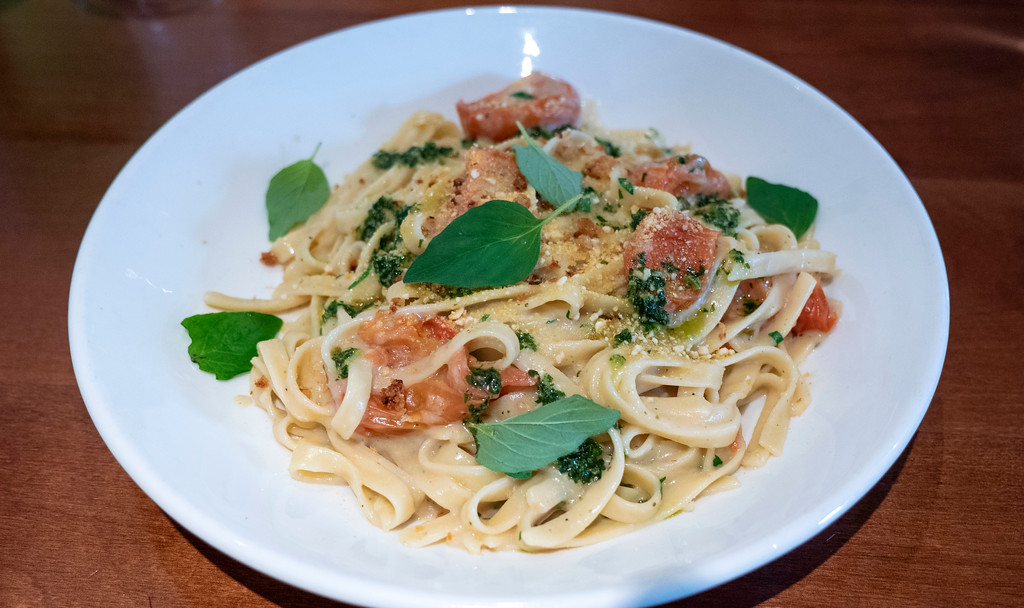 If you’re looking for the perfect coffee stop amidst your wanders, pop by Vudu Cafe (16 Rees Street) for a quick pick-me-up. They’ve got a great selection of plant-based milks for lattes, cappuccinos, and flat whites. Plus, there are loads of vegan and raw desserts in their cabinet up front. Vudu Cafe is a very chill and relaxed environment for enjoying a cup of coffee. 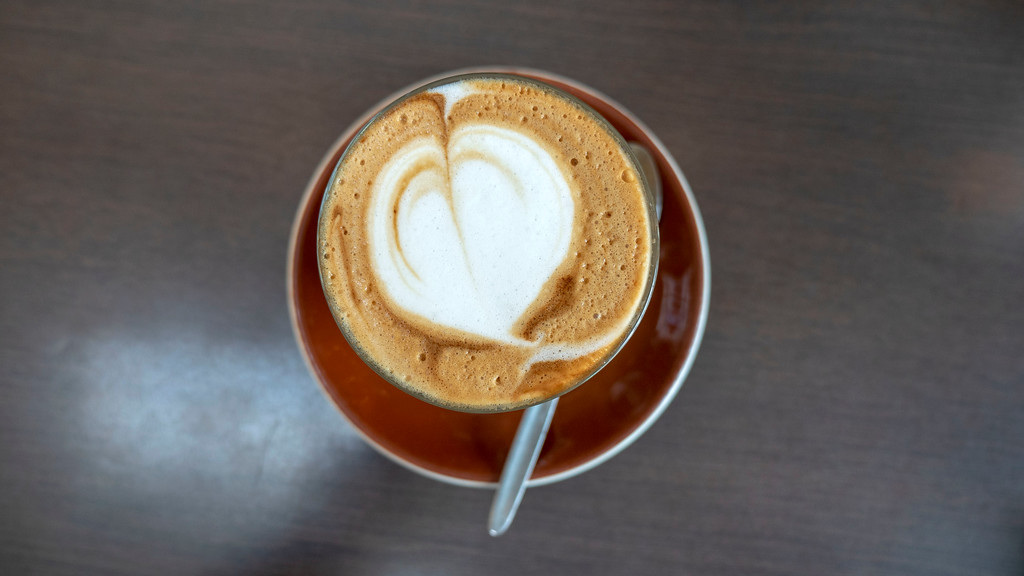 While we didn’t end up heading there for any meals, it’s actually a fantastic Queenstown vegan restaurant, too. The vegan items are marked on the menu, like the buckwheat orange zest pancakes or super summer food bowl with crispy tofu. Their menu rotates with the changing seasons, but I’m sure they’ll always have at least a few vegan meals on it. 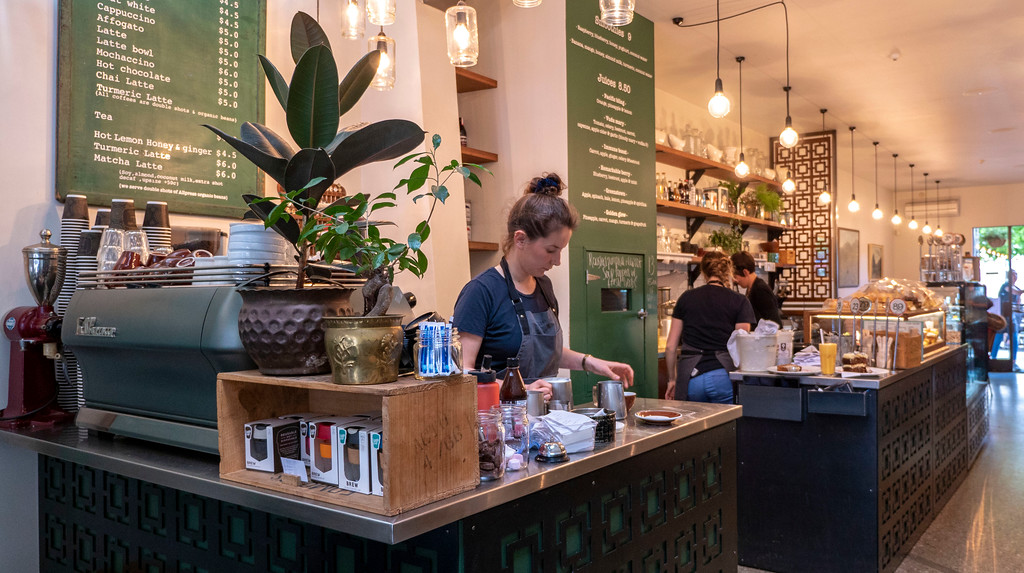 Seeking more Queenstown travel inspiration? Check out our Queenstown cinematic short travel video that showcases the beauty of the town in spring. If you’re looking to travel beyond Queenstown, be sure to take a look at our recommendations for day trips on your way to Wanaka. 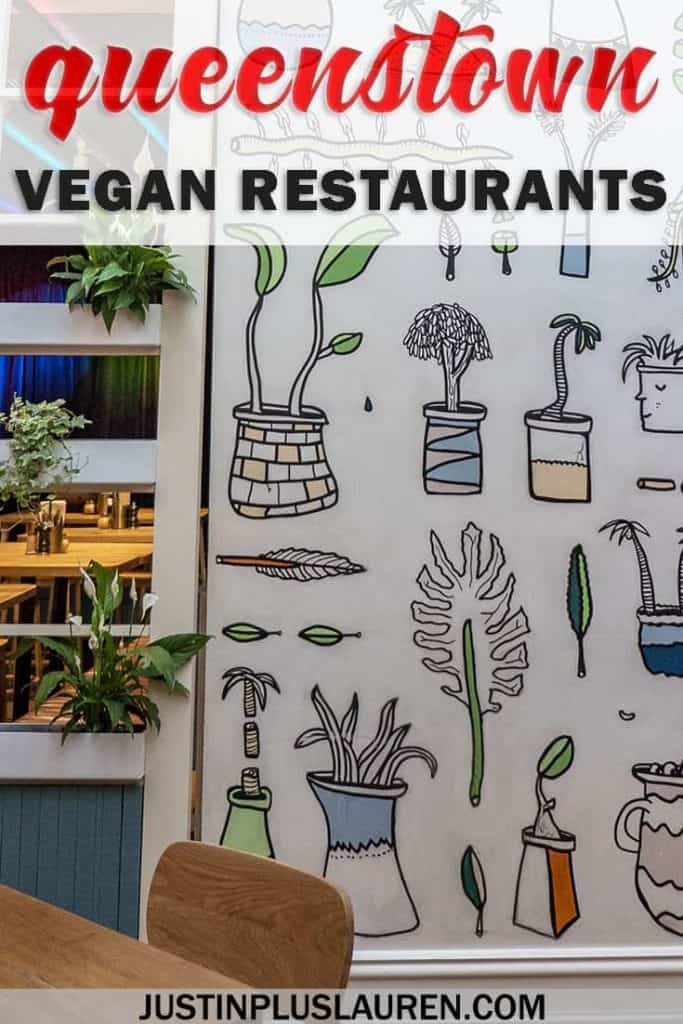 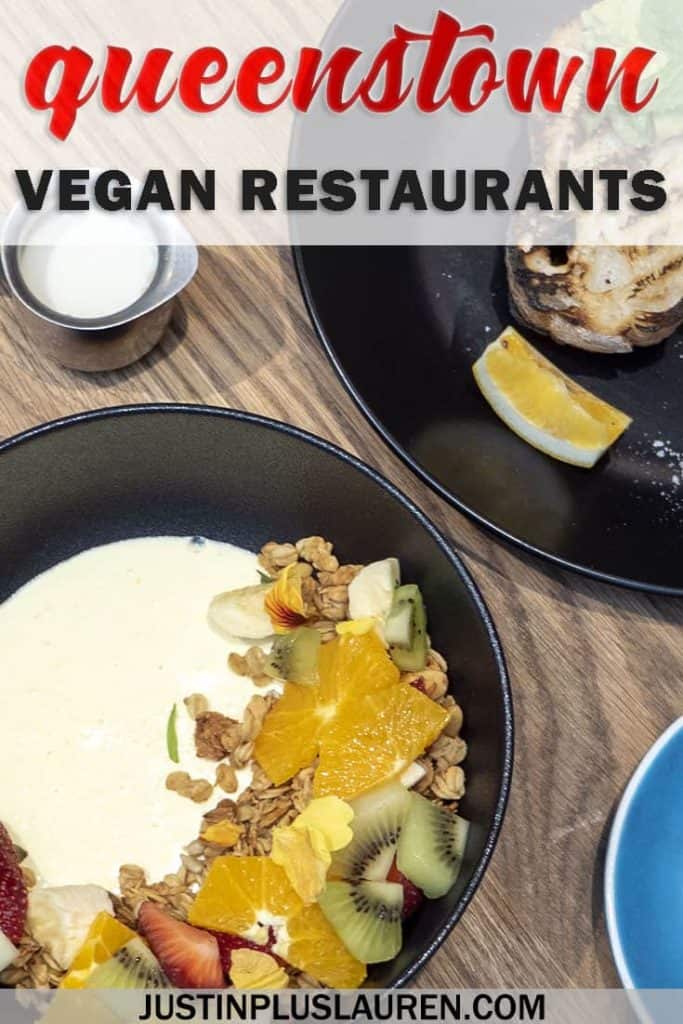 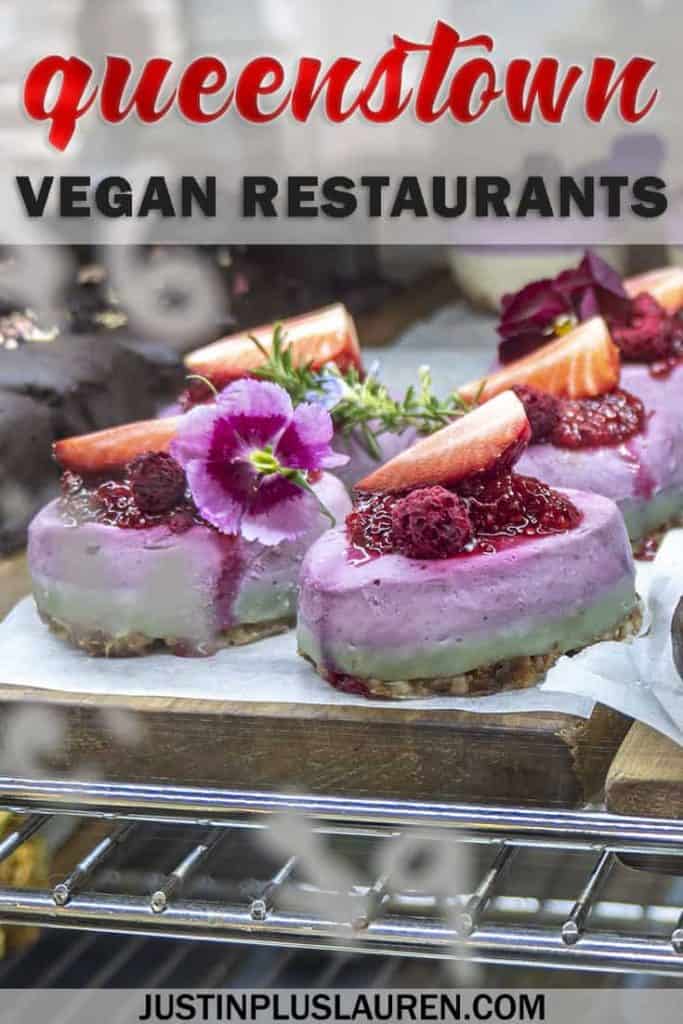 Have you visited Queenstown? Tell us about your experiences! 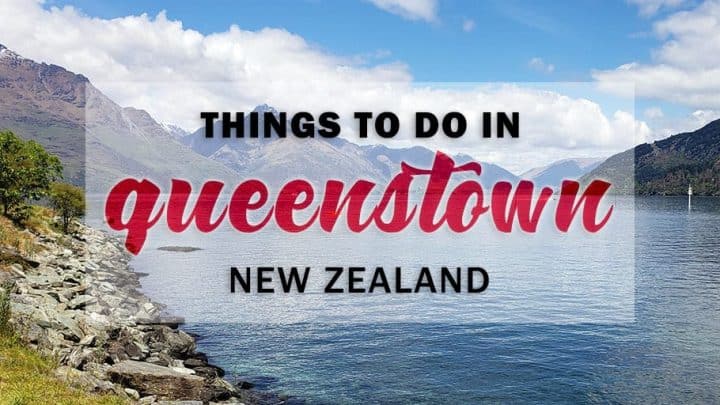 Things to Do in Queenstown

A one day travel itinerary for Queenstown, New Zealand. 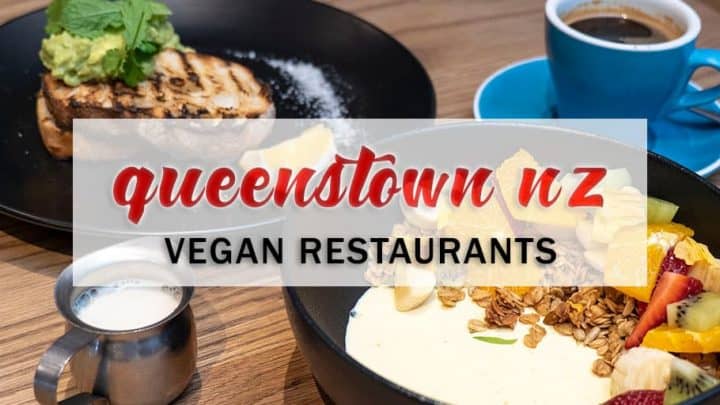 Vegan and vegan-friendly restaurants in Queenstown. 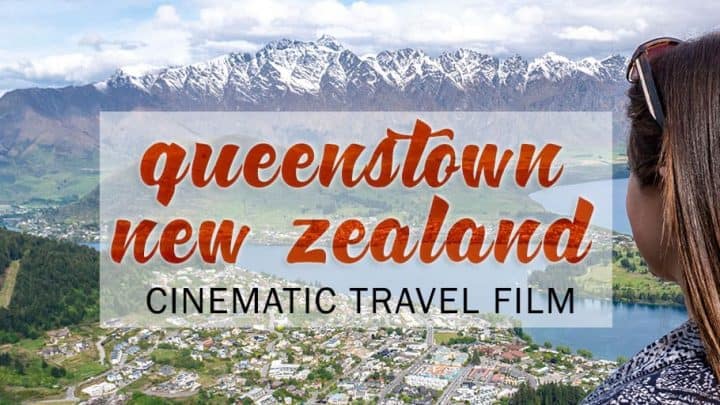 Queenstown in Spring: A cinematic travel video to inspire your adventures. 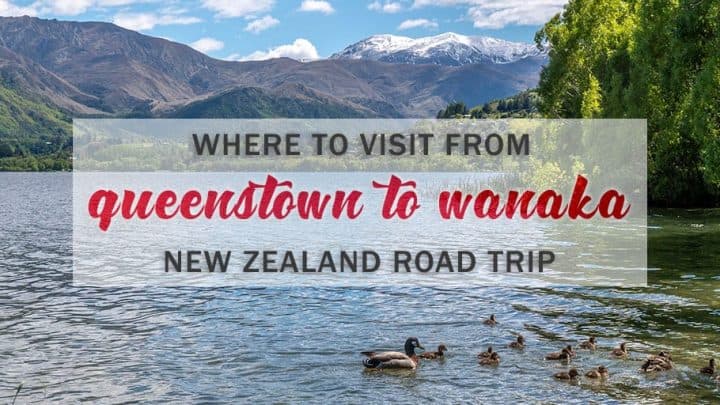 What to see from Queenstown to Wanaka in a day.

I don't ever really eat out but Queenstown is such a good place for vegan food! I did the Ben Lomond Hike last year & rewarded myself with Lord Of The Fries. WOW that was the best takeaway I've had in years.

Awesome post. Love reading about vegan eats. Eating out is something I've struggled with for a long time!

Yes! We were really pleased with all of the vegan options in Queenstown :)