The Caribbean Princess was scheduled to reach St. Maarten at 10:00am, but the ship was running slightly late. This left us feeling a little anxious as we had booked an excursion with a private tour company for the day. We were taking a snorkeling boat tour with Soualiga Destinations and we were set to meet at 10:30am at their small dock, which was a 15 minute walk from the ship. We originally were waiting by the exit on deck four, but were directed to move up to the dining room when it was announced that the ship would be marginally late. Robyn and I walked up to the dining room when we overheard a couple right ahead of us express their concerns to a staff member about leaving the ship right away. They also had a private excursion booked. As their situation sounded similar to ours, I asked them which excursion they were taking. As it turned out, they were taking the exact same one as us! We grabbed a seat with our new friends, Ian and Chris, who also happened to be from Canada (Victoria, British Columbia). We discovered later that it was amazing that we managed to meet up with them right away – we were the only four on the entire ship that took the tour, out of 3,100 passengers.

With Captain Bob’s (of Soualiga Destinations) directions in my hand, I guided us to the meeting spot for our tour. This involved some fast walking (sorry if I was walking too fast, everyone!) while I also marveled at the beautiful new surrounding landscapes of St. Maarten.

Sint Maarten, or Saint Martin, is a half Dutch, half French island in the Caribbean. Here are some quick facts about the island:

Thankfully, we were able to walk to the meeting place with plenty of time to spare and met Captain Bob when we arrived. There was another couple from New Jersey who took the tour with us. There were only the six of us on the tour, along with our tour guide, Captain Jim Kirk (yes…Captain Kirk!). When booking an excursion for a cruise, I generally try to do my research using Tripadvisor or the Cruise Critic forums to ensure that I book with a reputable or recommended private tour company with smaller groups. I was still amazed that there were only six of us in the group! 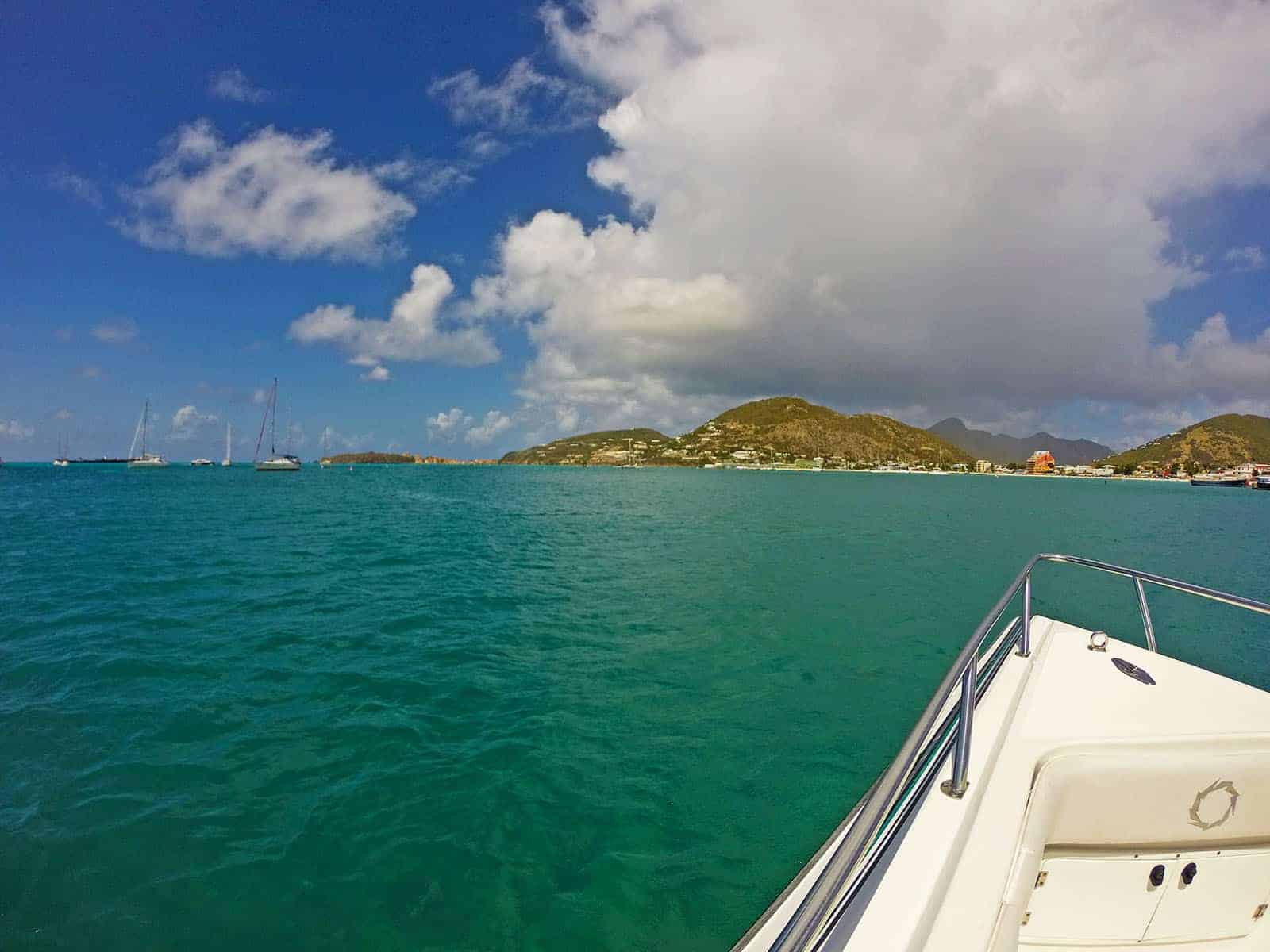 Robyn and I boarded the little speed boat and sat up near the front. We were informed that the people at the front might have a bumpier ride, though sitting at the back might mean that you get more wet. We wanted to sit up front where the action was. Ian sat across from us while his wife, Chris, sat at the back with the other couple. Once the speed boat got going, we were flying! On many occasions, we had to hold on to the side railing as we flew up out of our seats. It was very thrilling and lots of fun. At the same time, we got to see the beautiful scenery of the island, passing by many beaches, rocky shorelines, and green, lush mountainsides. 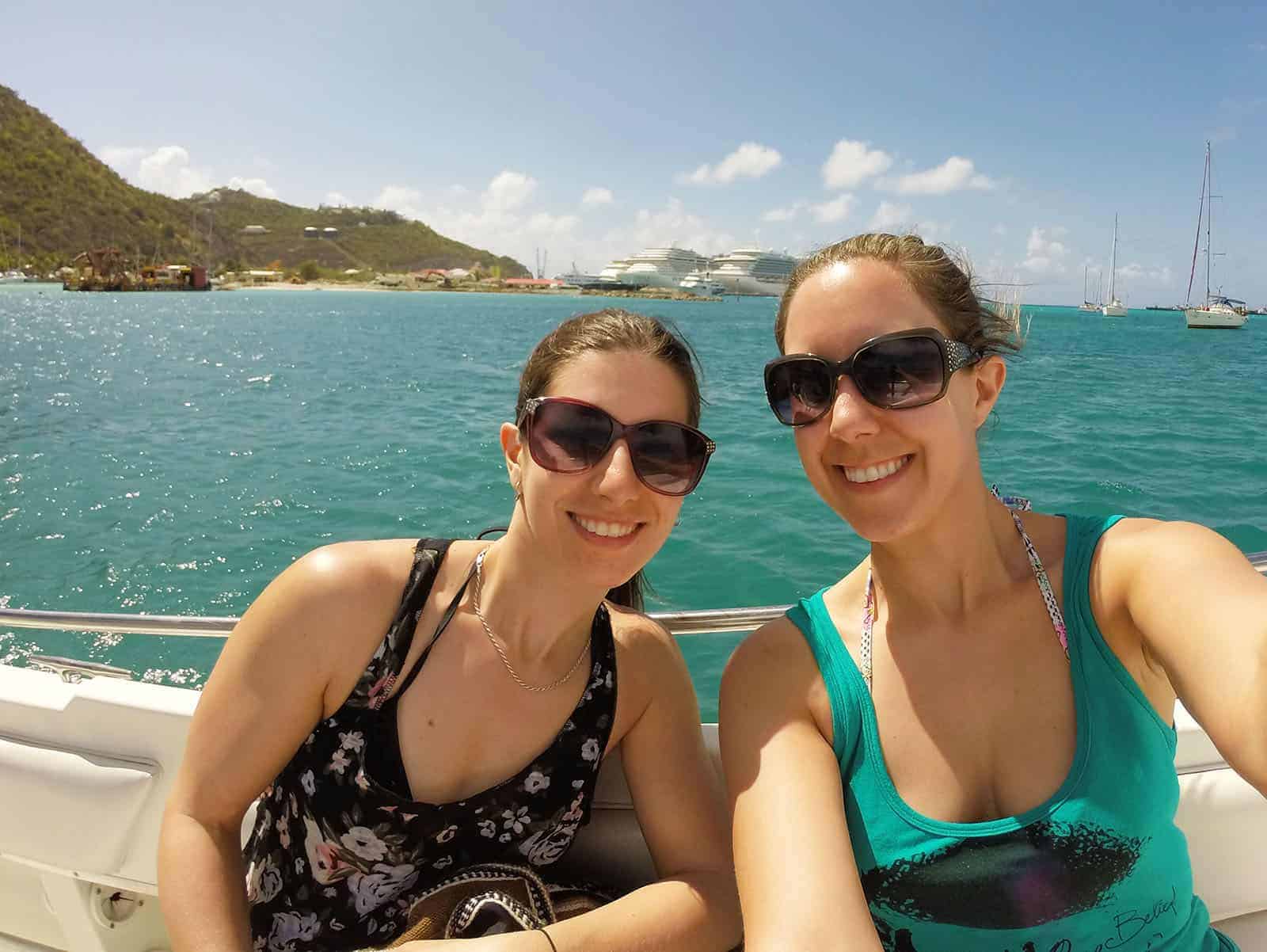 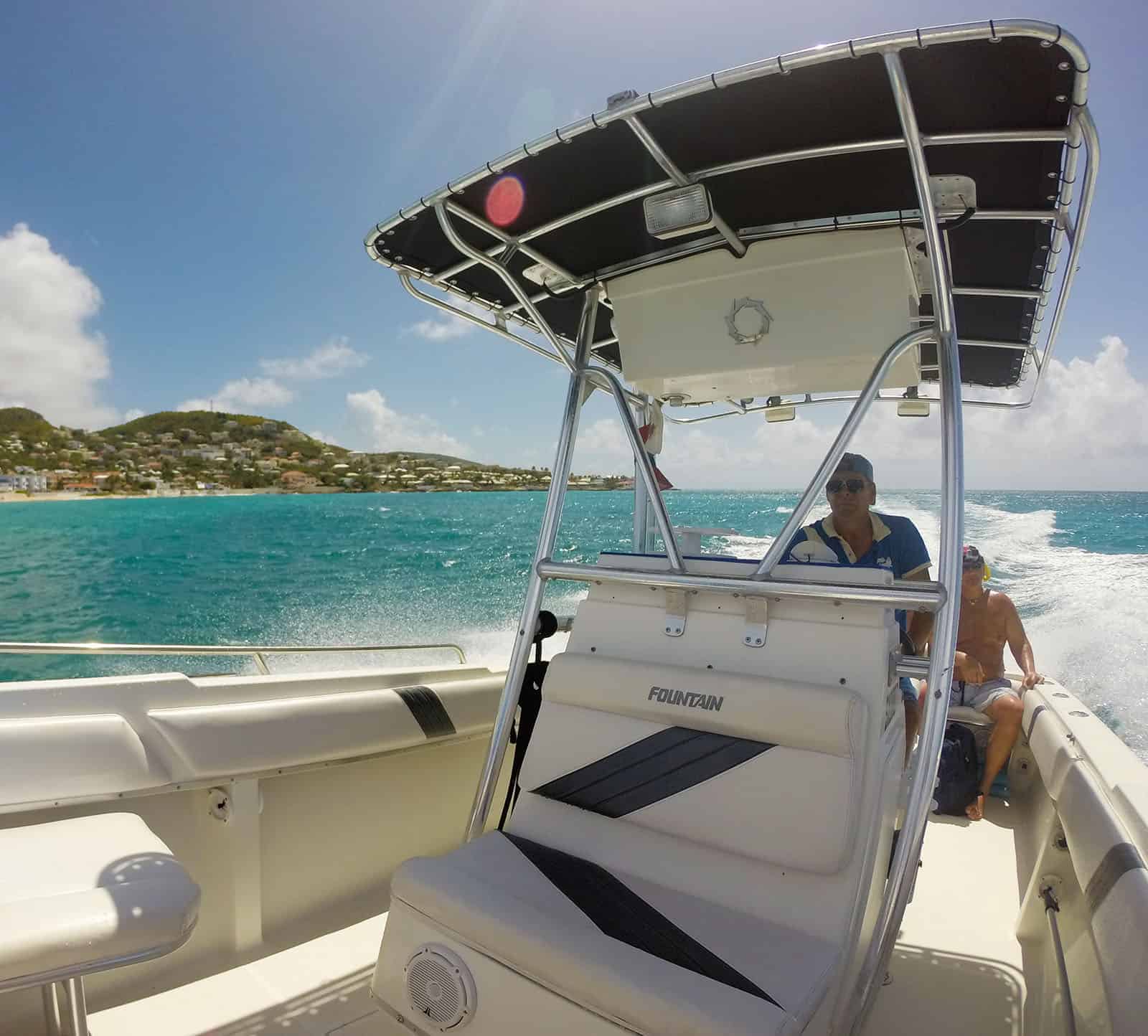 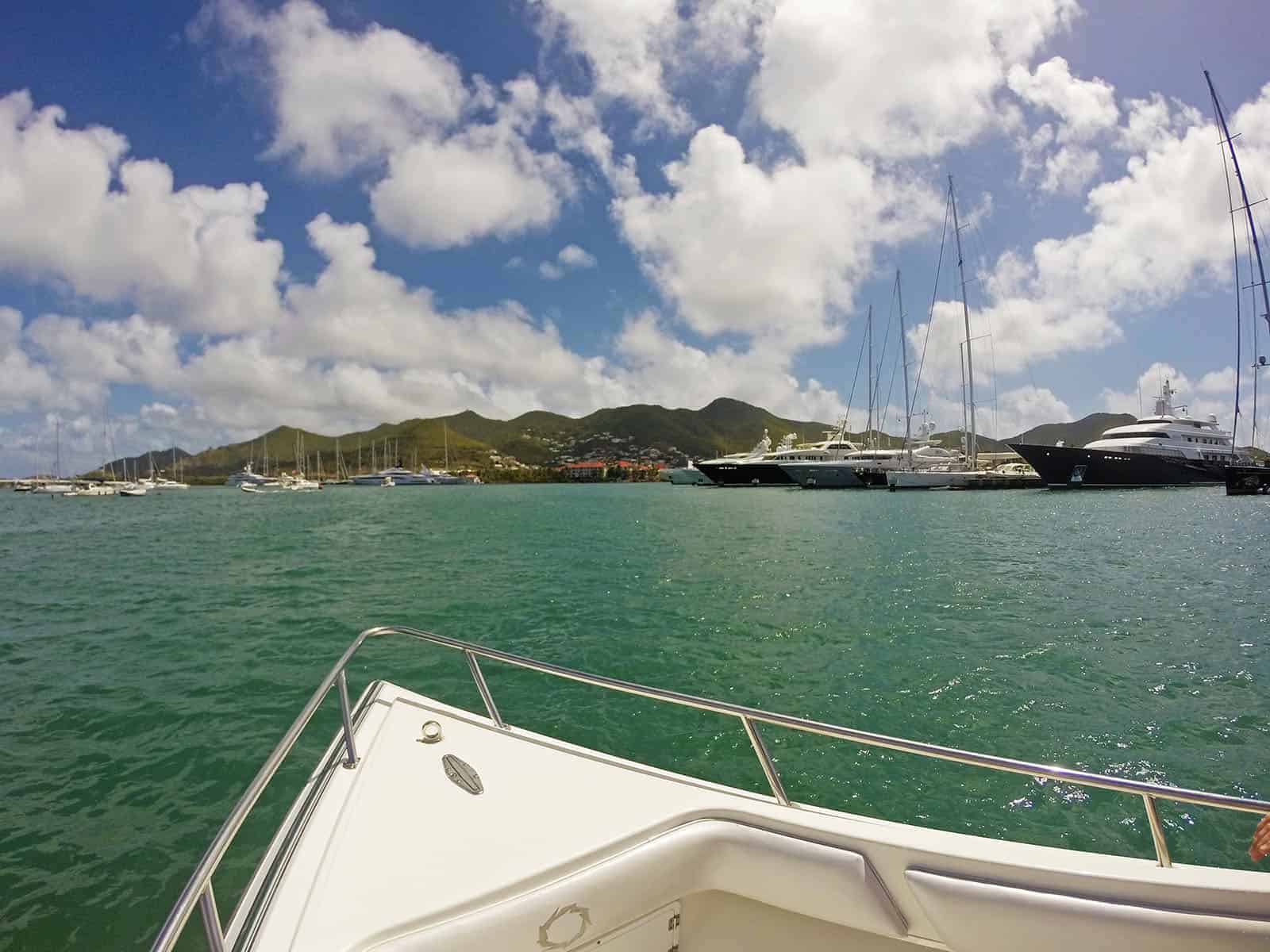 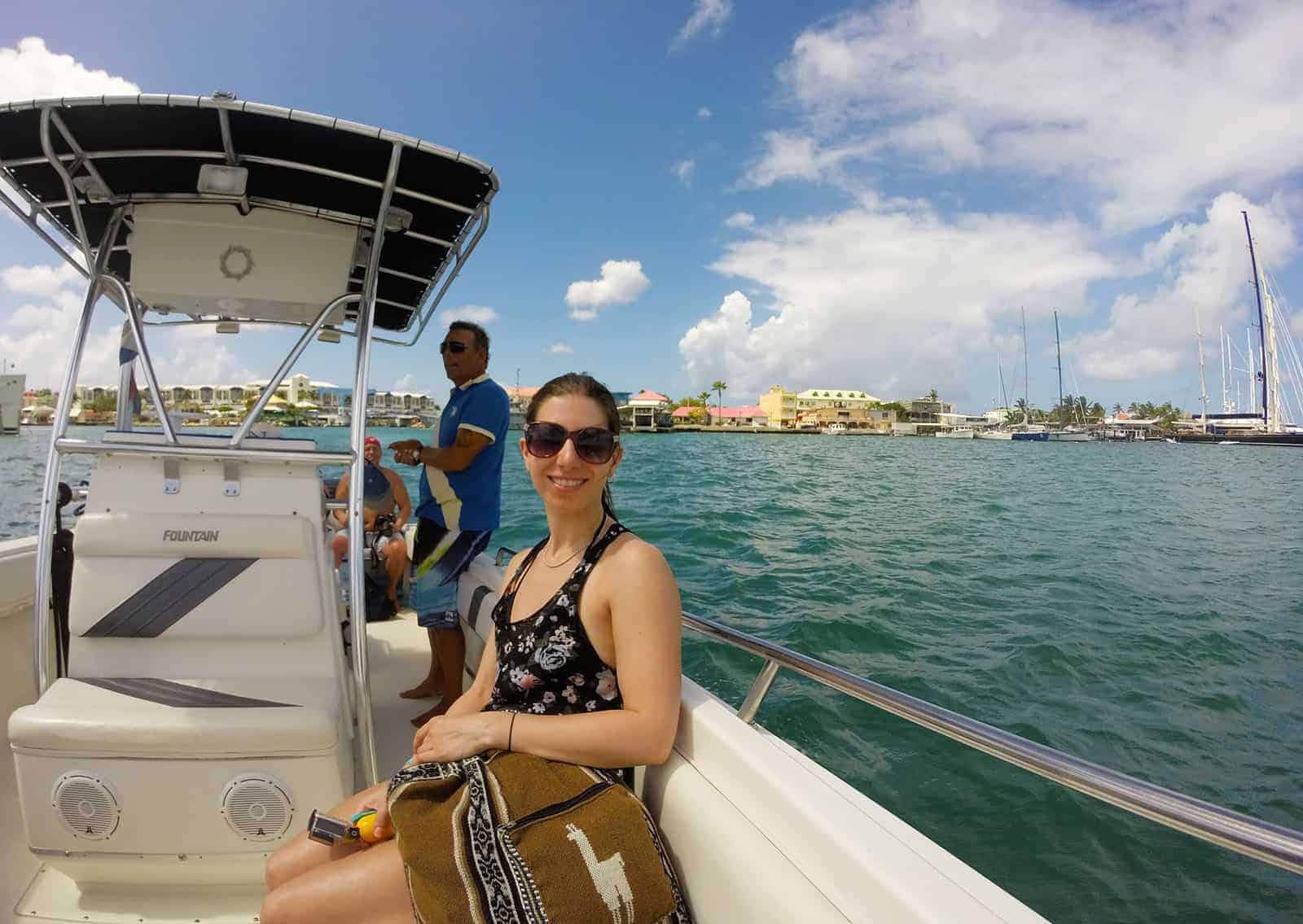 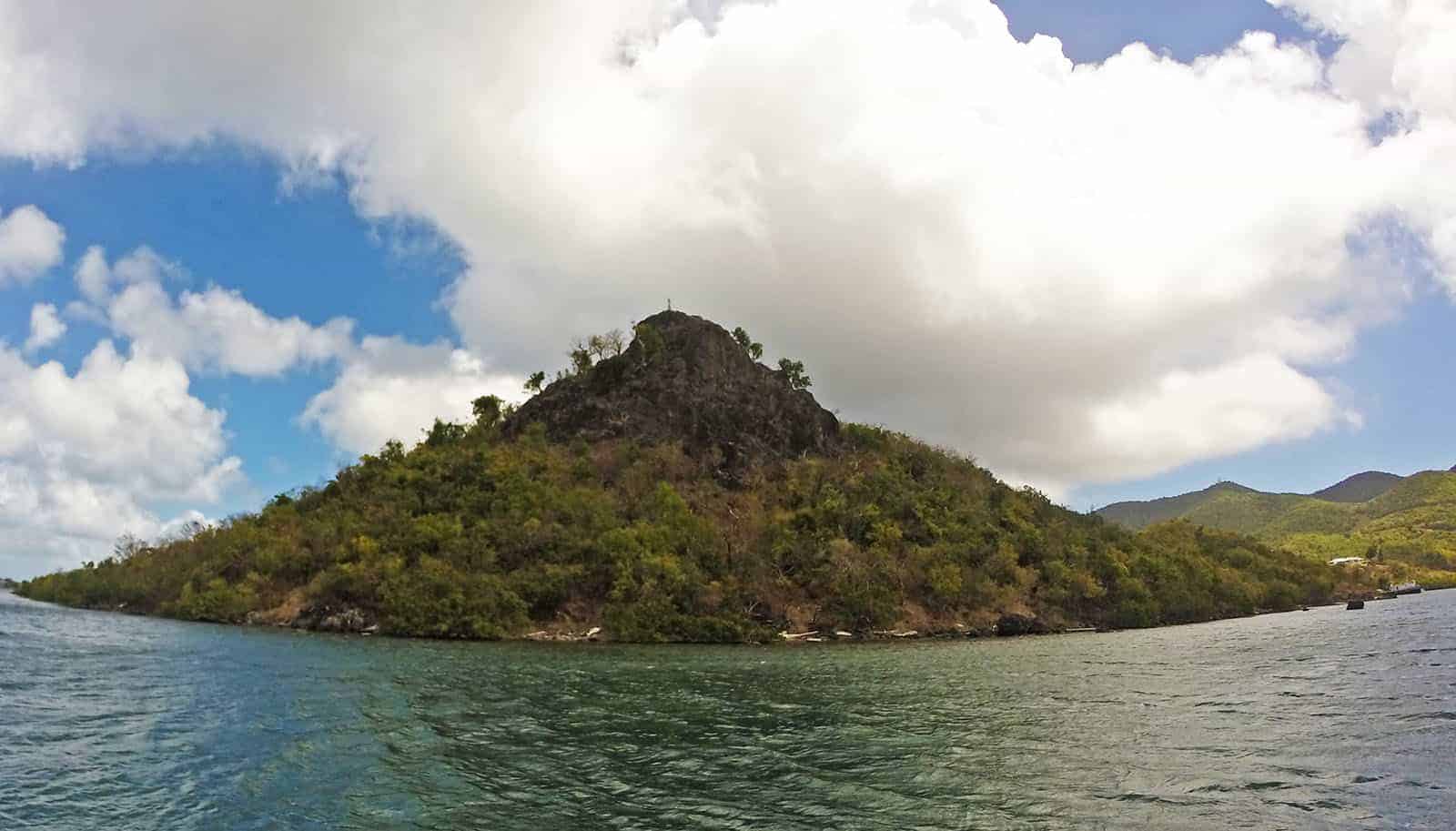 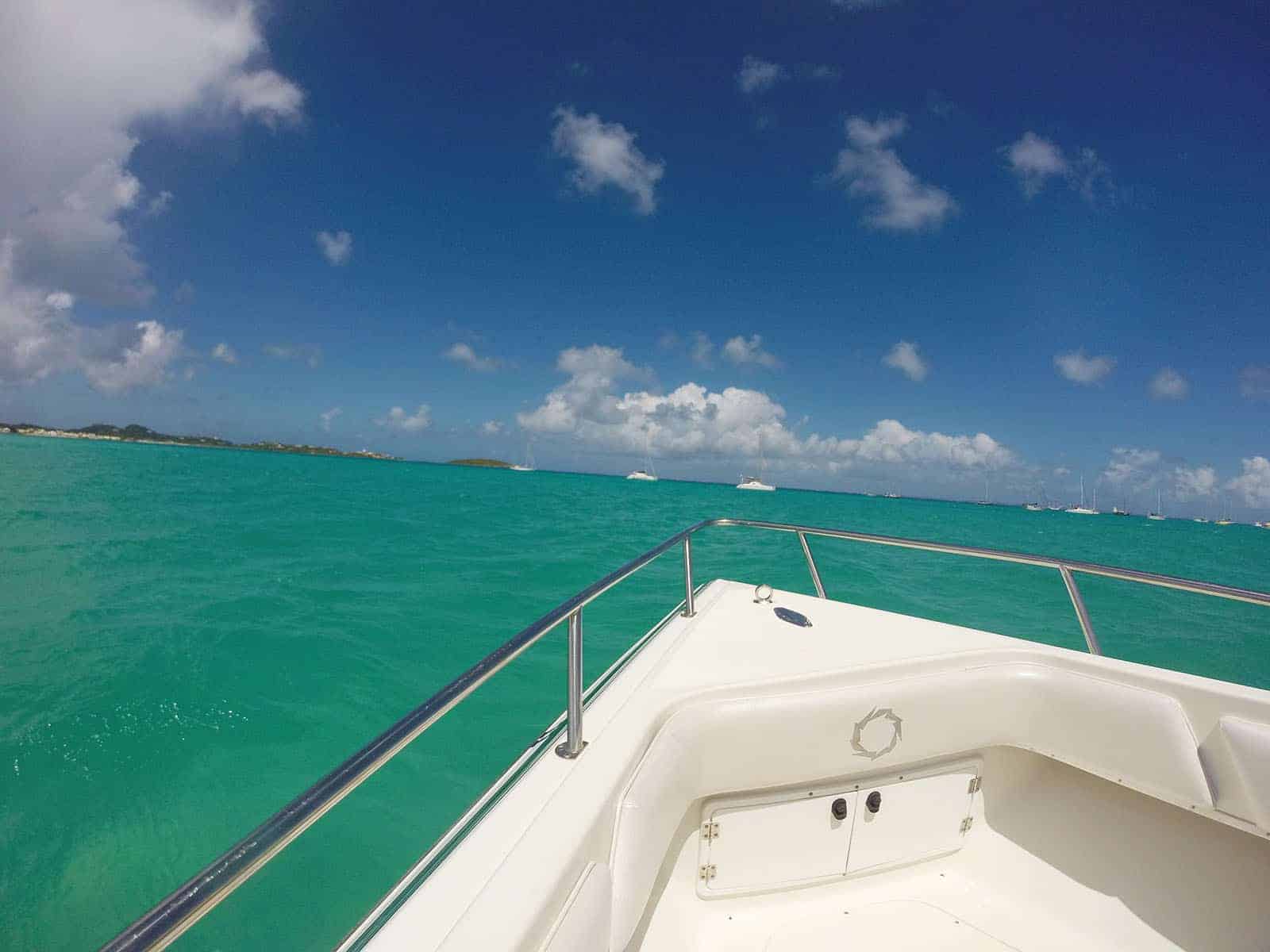 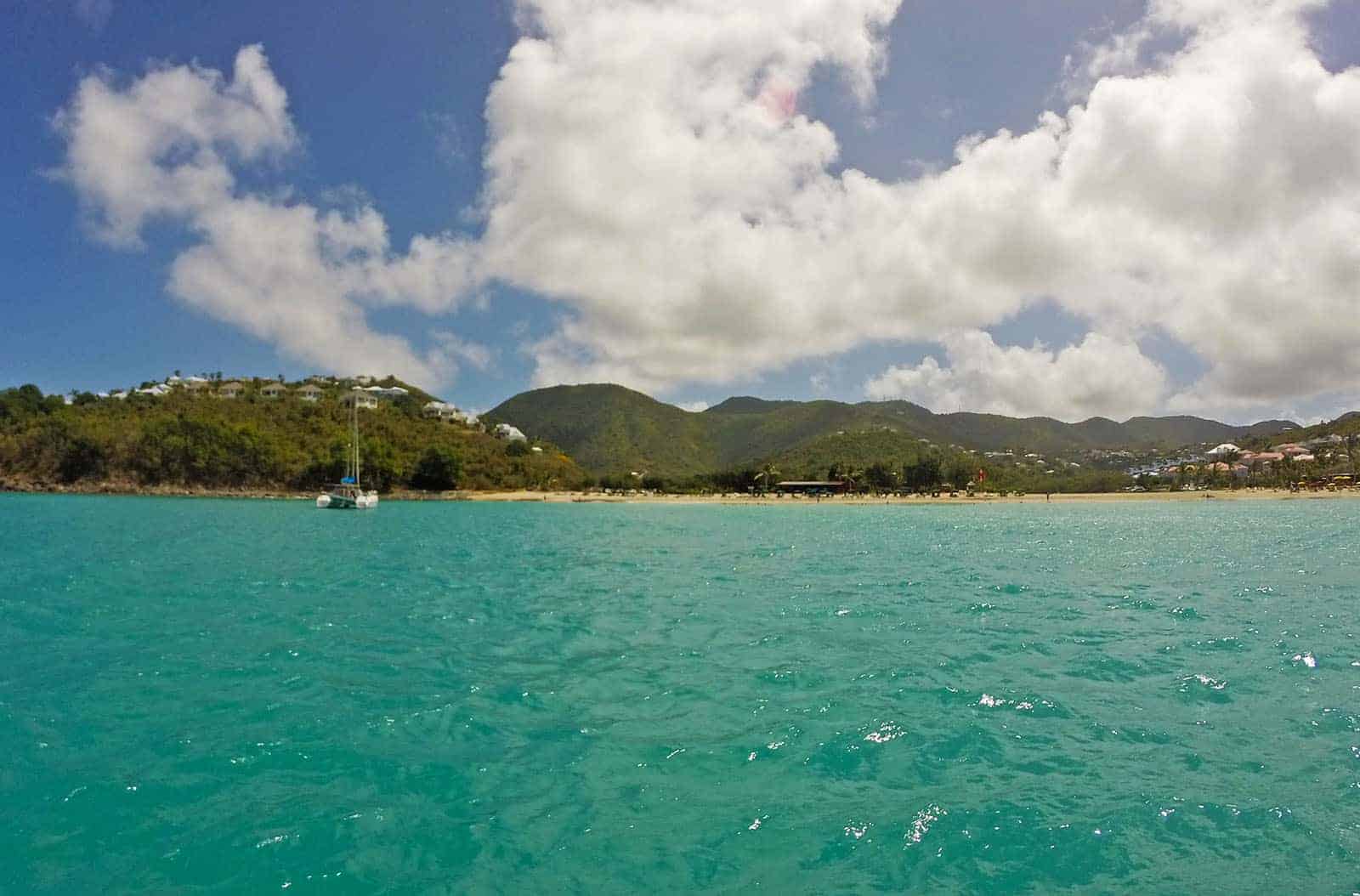 As we sped from Philipsburg along the Dutch side towards the French side, we noticed that there were fancier yachts on the Dutch side and smaller boats on the French side. Apparently it is more expensive to dock on the Dutch side. We crossed beneath the Dutch bridge into the Simpson Bay Lagoon to admire some of these impressive yachts. Then, we sailed beneath the French bridge towards Marigot and into the Caribbean Sea. We sped past several beaches on the north side of St. Martin, including Lovers Beach, Happy Bay, and Grand Case. Though it was bright and sunny during our day in St. Martin, it was incredibly windy. As it was far too choppy, we were unfortunately unable to sail towards Tintemarre Island on the Atlantic side of the island. This was very disappointing as Tintemarre Island is a deserted tropical island in the French Nature Reserve, and there were great chances to snorkel with sea turtles there. Unfortunately, we couldn’t control the weather and the conditions wouldn’t have been very good for snorkeling with the choppy waves. We still had lots of swimming and snorkeling to do in other areas and definitely made the best of the situation. 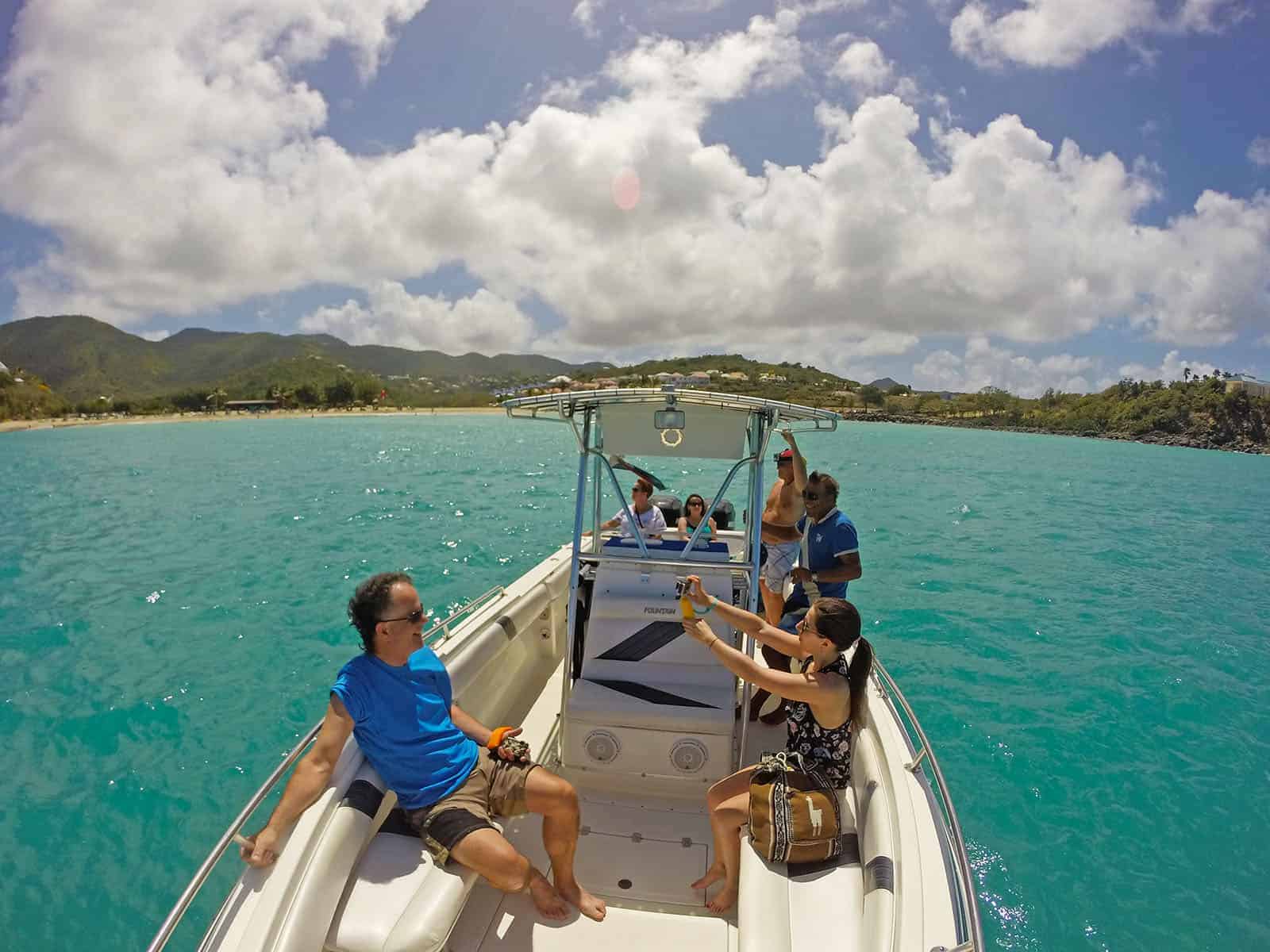 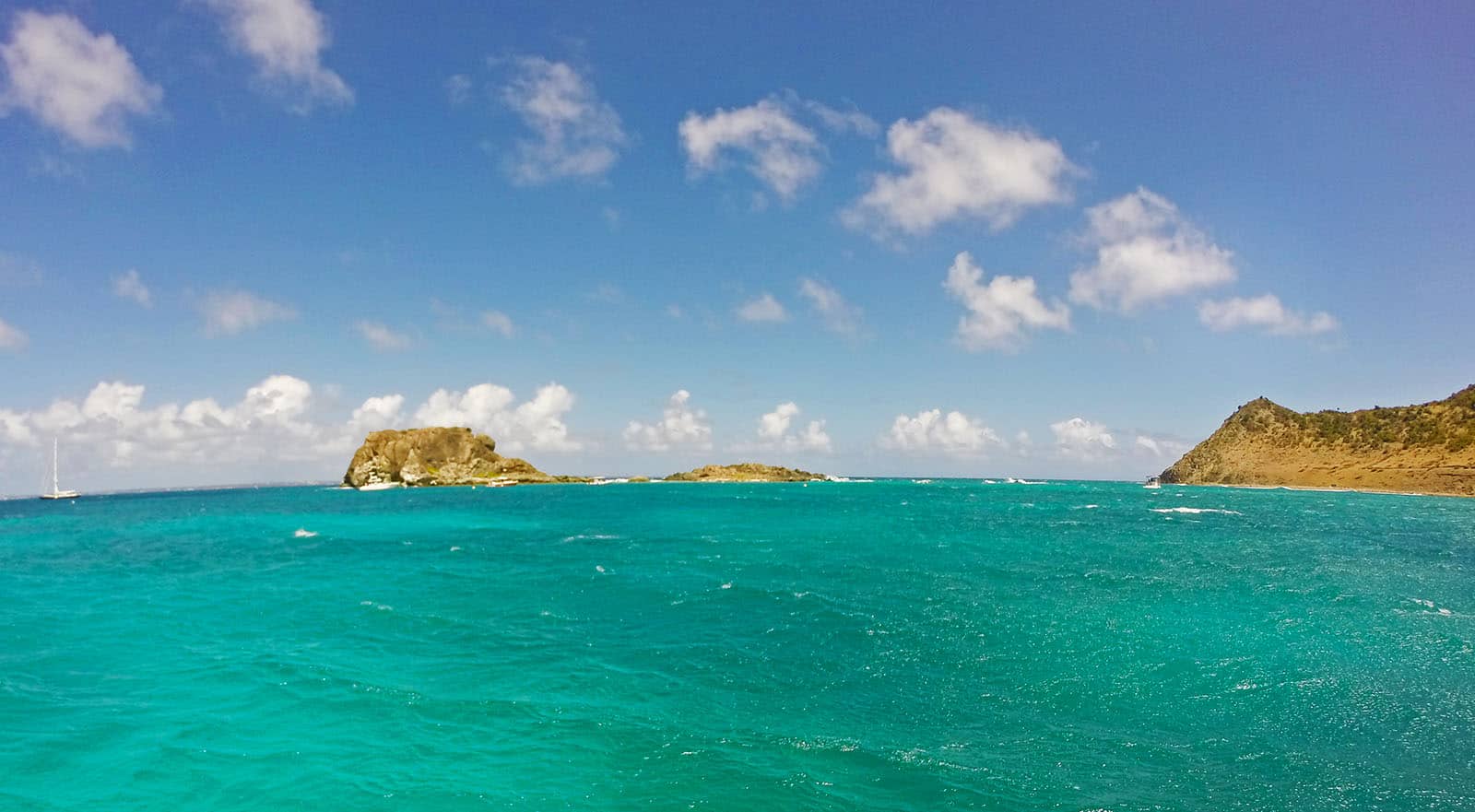 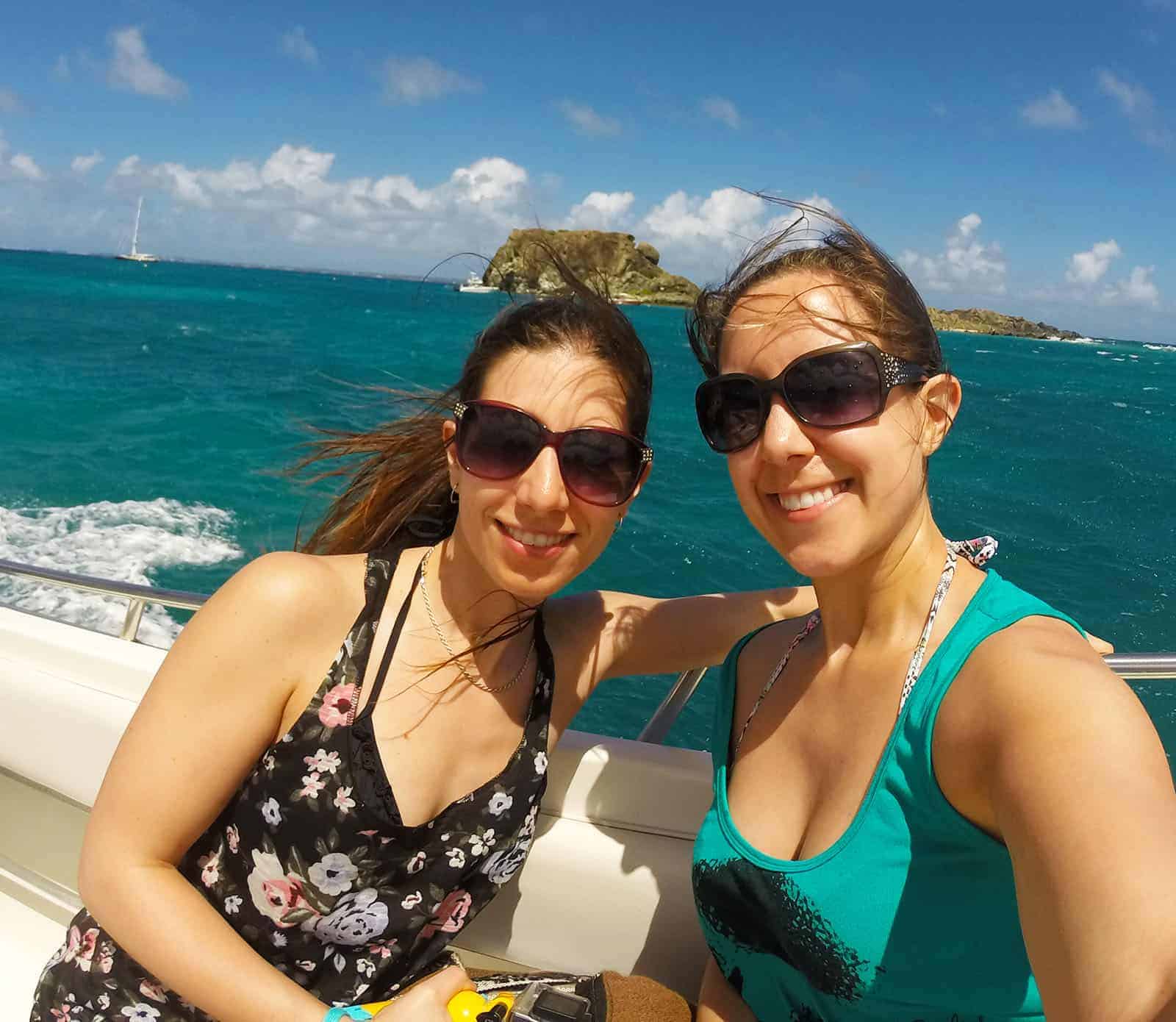 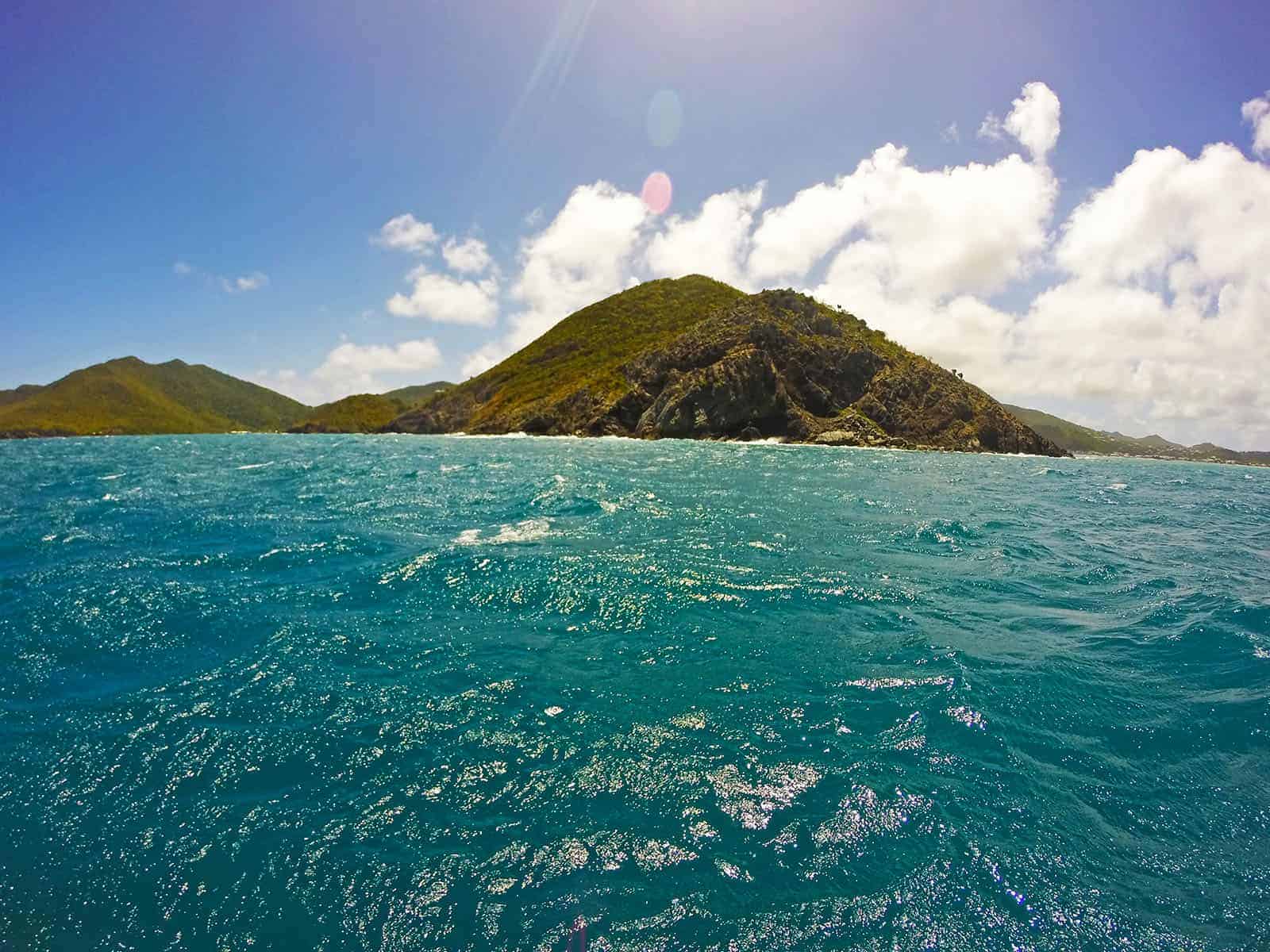 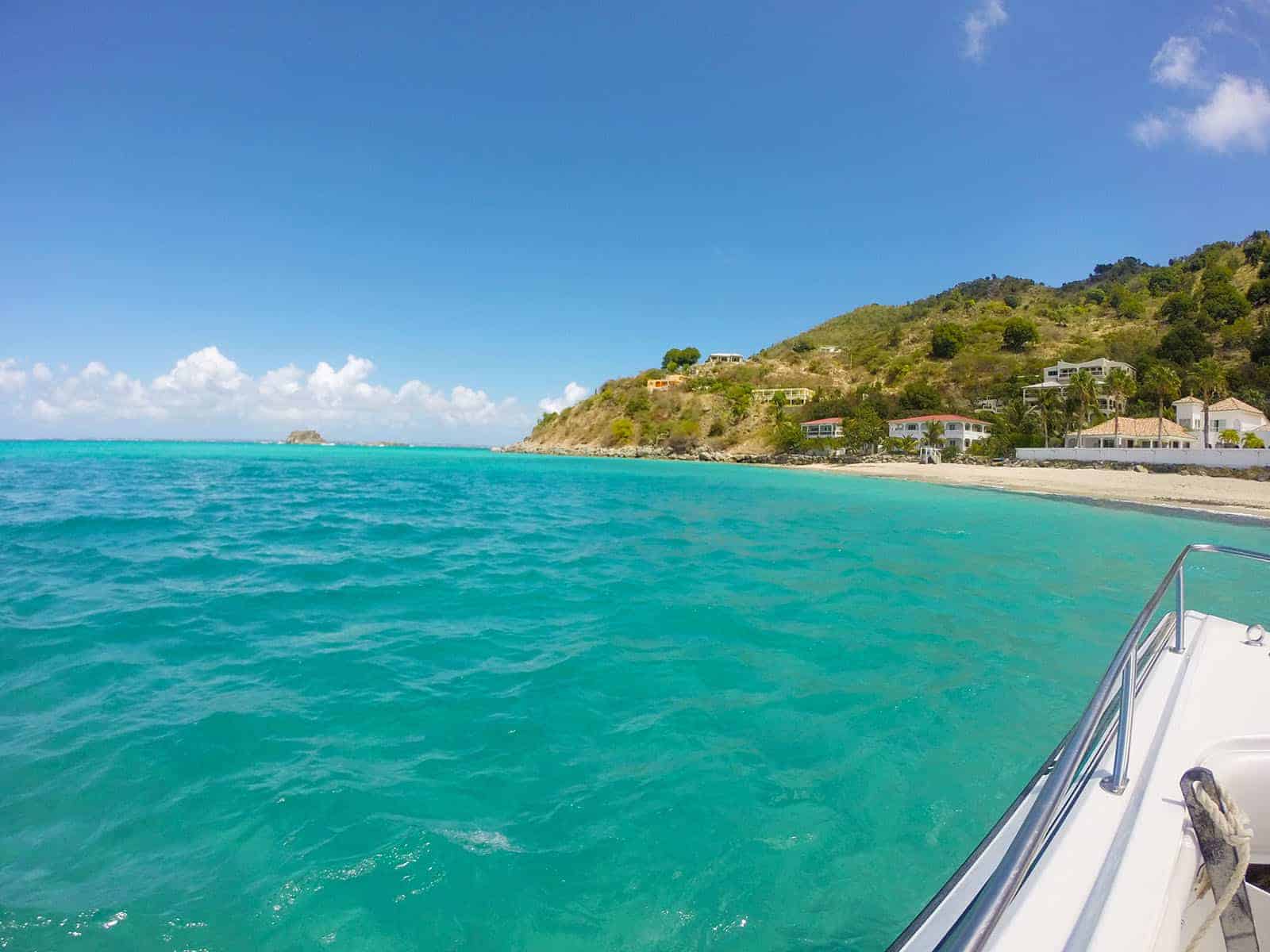 We decided that we’d spend the rest of the morning snorkeling at Creole Rock. Before snorkeling, Jim took us to a small beach on the mainland near Creole Rock for a snorkeling lesson. Though maybe some others found this to be valuable, I really wish that we hadn’t spent the time doing this. Both Robyn and I have snorkeled on several occasions in the past and didn’t need any sort of introduction. Out of the six of us, maybe only one of us needed a lesson. I would have much rather spent the time snorkeling or sailing than fussing with our masks in shallow waters. I think that the tour company should have asked everyone ahead of time how experienced we were and only spent the time teaching basic snorkeling lessons to those who requested it.

The snorkeling at Creole Rock was pretty good. The speed boat anchored off the coast and as we swam closer to the small rocky islands, we got to see more species of fish. There were many sea urchins lining the ocean floor, and the fish swam between the rocks. There were more rocks than coral here, though I did see many fish. 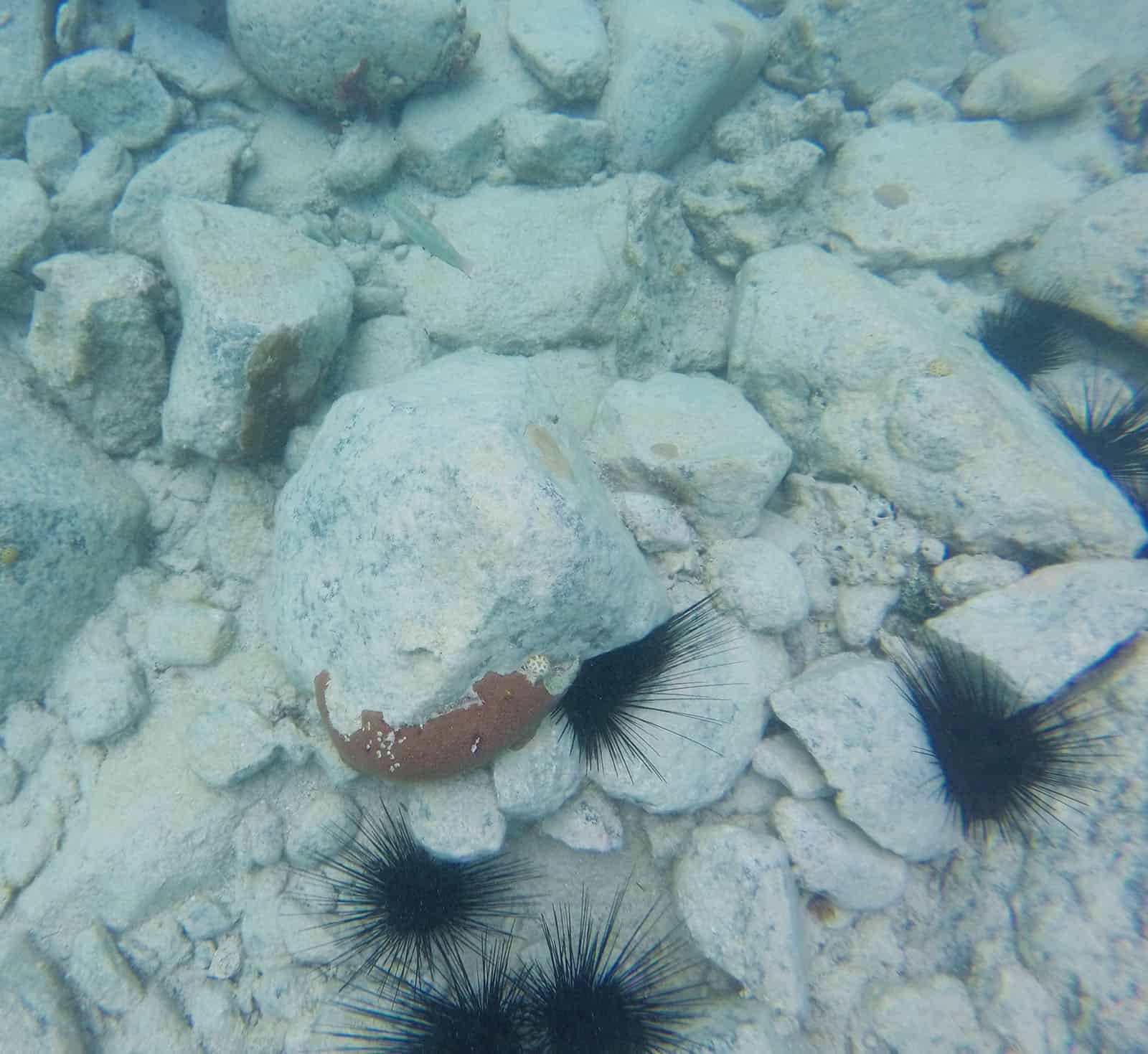 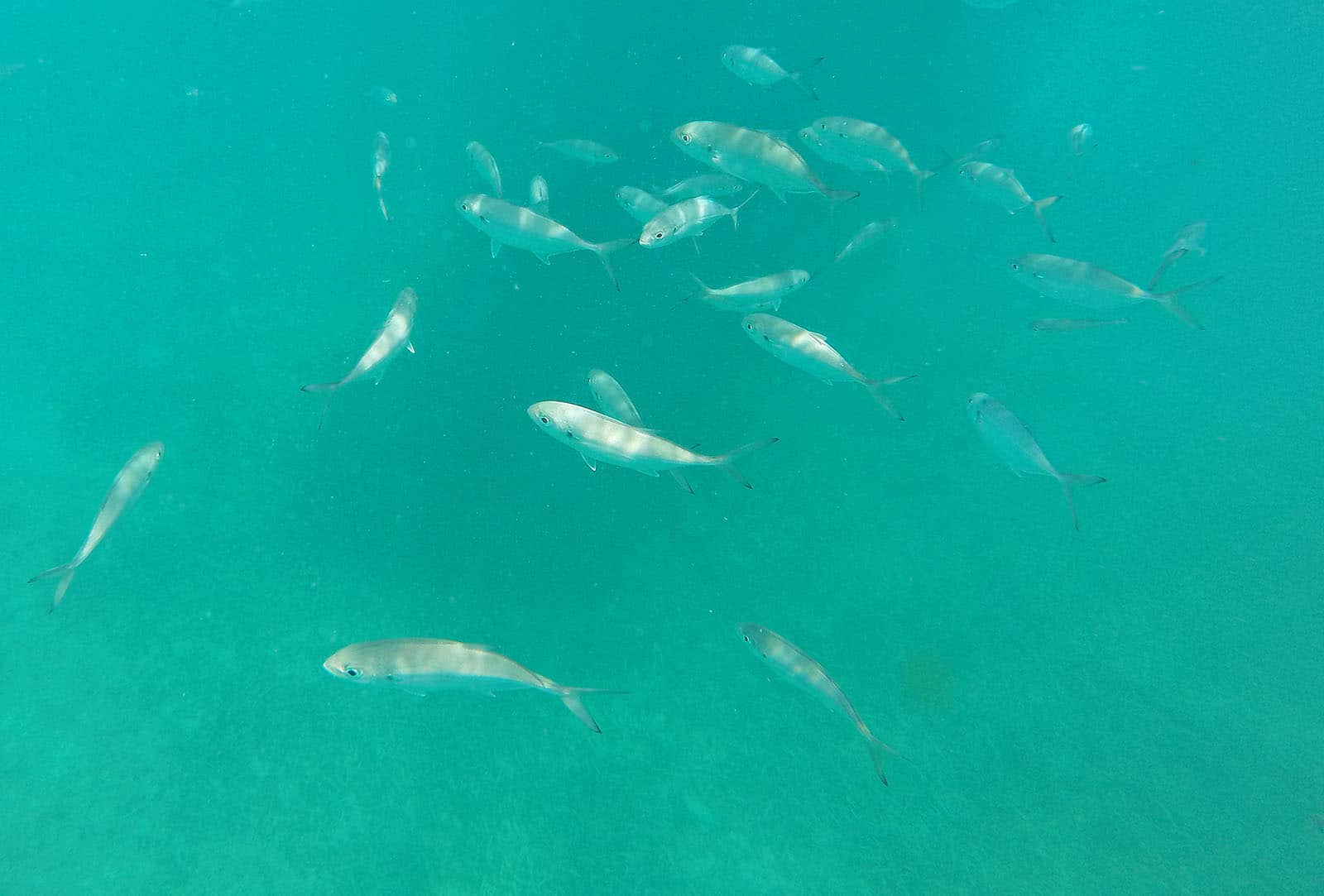 When we swam back to our boat, Captain Jim threw some bread into the water to attract the fish. Huge swarms of fish swam all around us in a frenzy for the food. It was hilarious to be completely surrounded by schools of fish, furiously swimming all around.

It was time for some lunch and we stopped at Grand Case Beach. After spending a short amount of time in the sunshine on a beach lounger, we went to a local Caribbean restaurant for a meal. I had asked ahead of time for a vegan and vegetarian meal as we were only offered meat and fish options. Jim said that he could ask for a big salad along with some rice or fries. While the food was being prepared, we all headed to the bar to get some frozen margaritas. 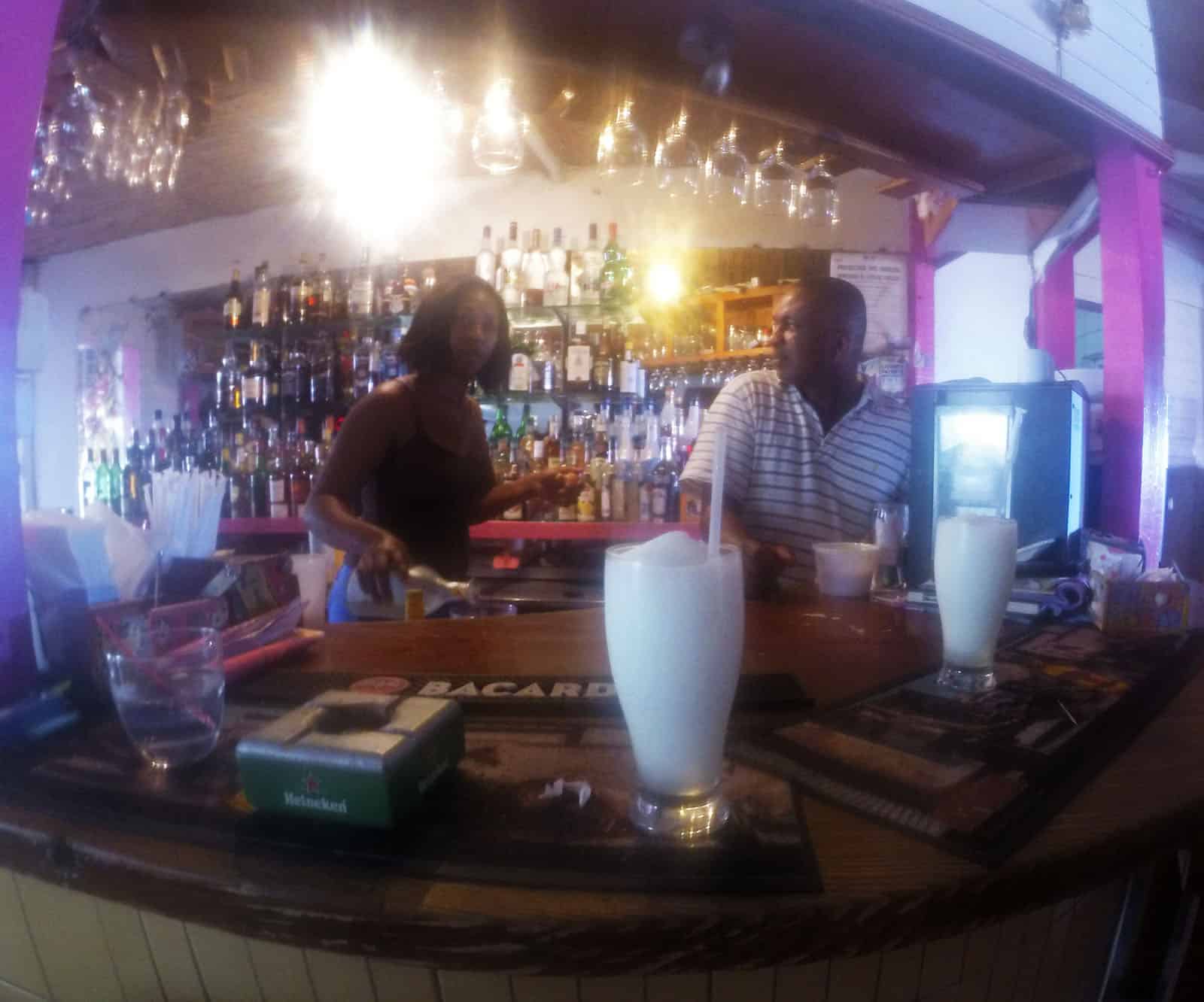 We sat down on the patio overlooking the beach and our food arrived. We both were provided with a large salad that was really yummy. There was even corn and potatoes in the green salad, and these were really great additions that I don’t typically see in a salad. Unfortunately, we never did get any fries or rice. I’m suspecting that they were usually prepared using animal ingredients. The salad was good, but it really wasn’t that filling after a vigorous morning of snorkeling and swimming. I realized that the restaurant didn’t know about our dietary requests ahead of time, though I did make the request months ahead of time when I booked the tour. It would have been nice if we had received something a little more substantial with our meal that was vegetarian, though the salad was really good.

On our journey back, I sat in the back of the speed boat for a new experience. It wasn’t nearly as bumpy, but I definitely felt more water and mist splashing all around. I didn’t get soaked as the wind seemed to work in my favor. As we were unable to visit the French Nature Reserve, Jim took us to Mullet Beach as an alternate snorkel site. As it turned out, many other tour companies had the same idea as I’m sure many of them couldn’t travel to their original destinations due to the wind. Mullet Bay was packed with tourists, catamarans, party boats… you name it. As a result, the snorkeling here was non-existent and we saw zero fish. Oh well! We enjoyed a nice little swim around the waters and got back into the boat. 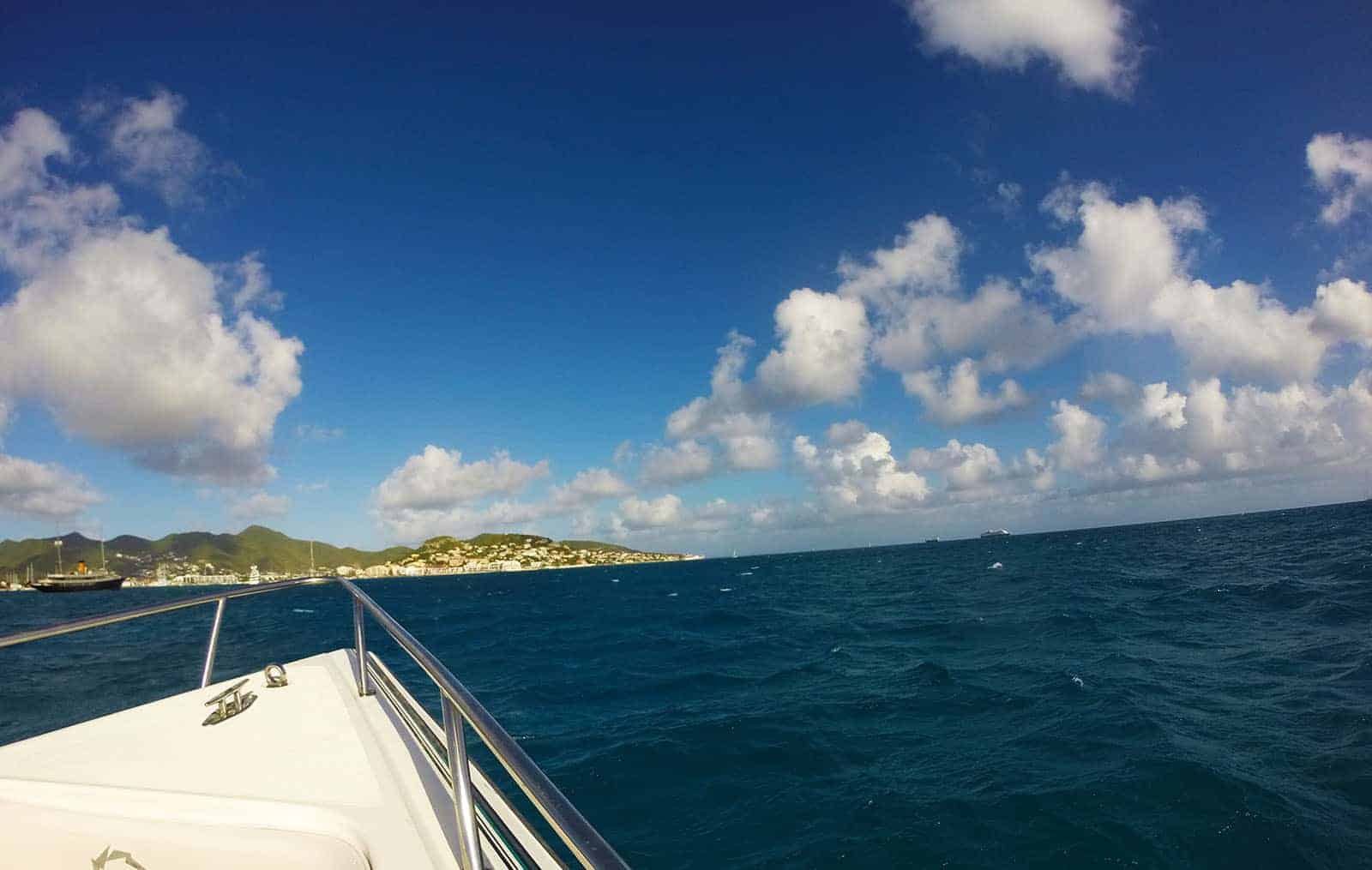 We made our last stop at Maho Bay, near the main airport where the big planes fly directly overhead. We didn’t end up seeing any jumbo jets flying above us, but we did see one really tiny plane land! It wasn’t nearly as dramatic as seeing one of the huge planes, but we’ll just have to return someday to witness that spectacle. Robyn and I drank some “Presidente” beers, which were very refreshing after a day of snorkeling, swimming, and soaking up the sunshine. Jim told us that people don’t get hangovers while drinking Presidente beers because more natural and better quality ingredients are used in making the beer. I don’t know about that – I’m sure if I drank enough of them, I’d have a pretty bad hangover! But, I’ll take his word on that.

The speed boat ride around St. Martin was truly a highlight of this excursion. I had never been on a speed boat before, and I found speeding and gliding over top of the water to be really exciting. Back at the dock, we all thanked Jim for a truly delightful day exploring St. Martin by boat. It was really fantastic to see the shorelines, beaches, and waters of this beautiful place in a unique way. Our small group posed for a group photograph to remember our fun excursion together. 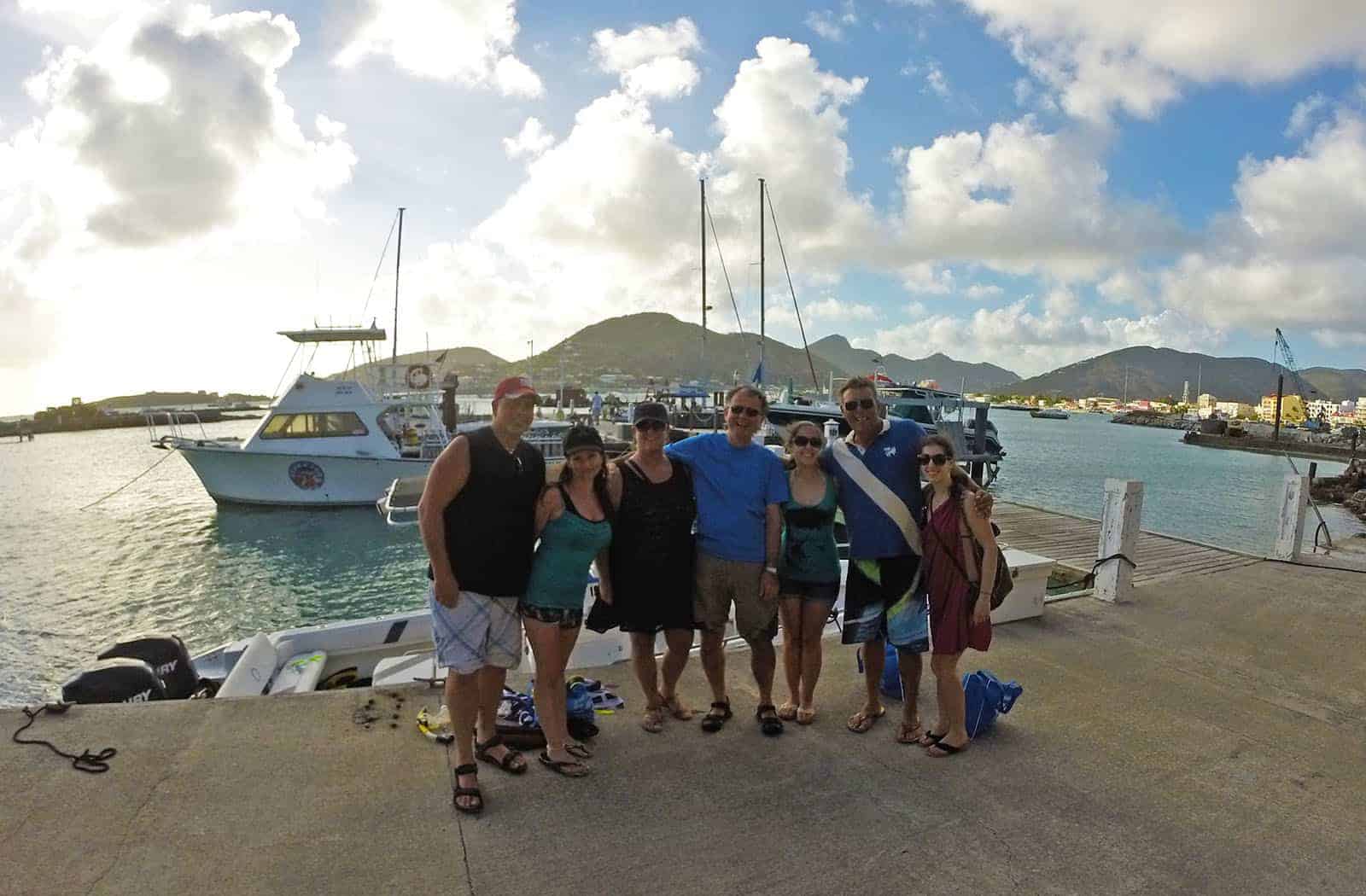 We had a little bit of time before we had to be back at the Caribbean Princess, so we stopped at a few small shops and stands. Guava fruit, a tart berry, was the local specialty and the thing to purchase here. I bought a few gifts and things made from the fruit – guavaberry jam, guavaberry BBQ sauce for Justin, and some guavaberry rum, of course! 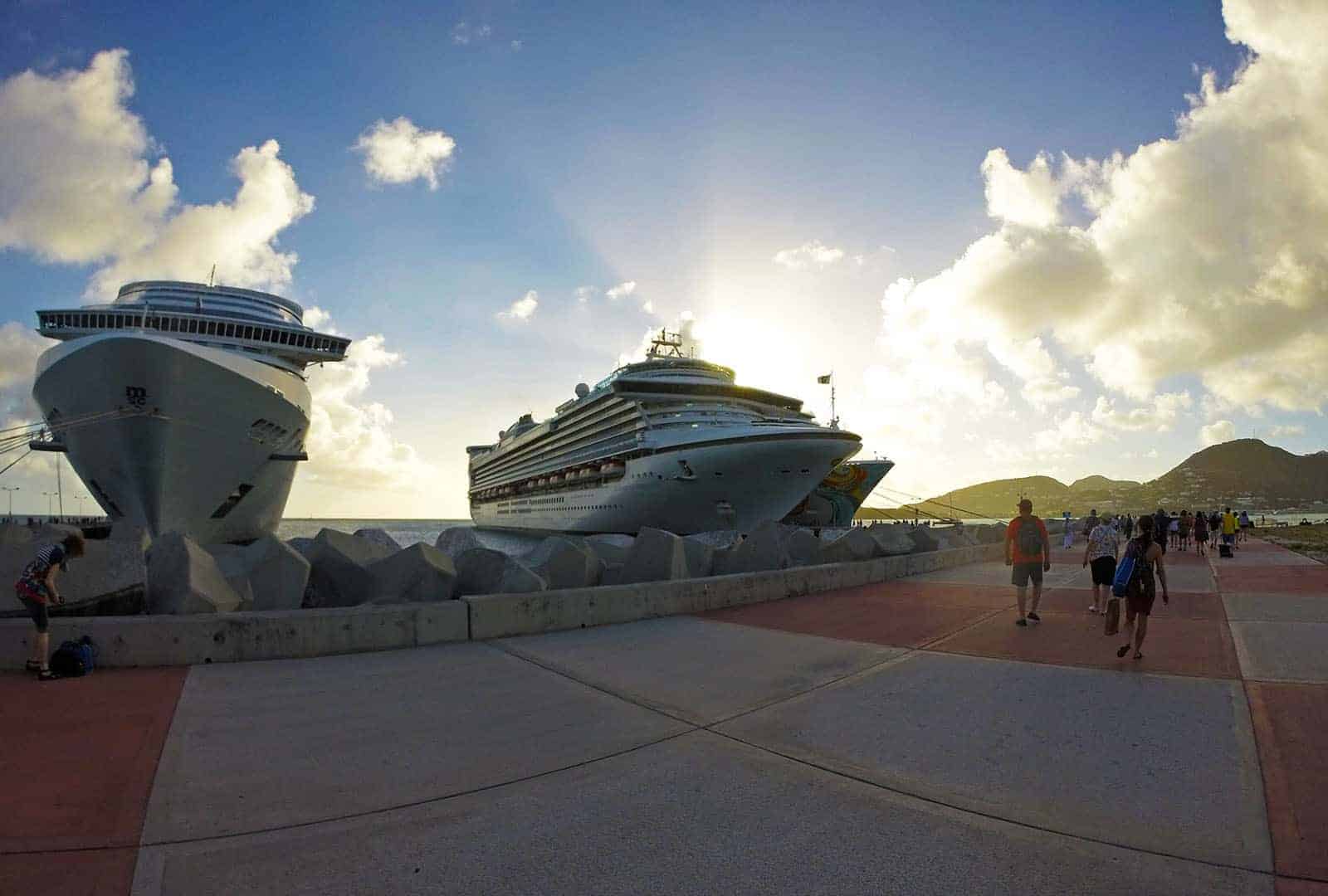 Soualiga Destinations takes pride in being the first company to offer their original island speed boat tours, snorkeling, and beach excursions. They are rated #1 on Tripadvisor for a reason! Even though the weather didn’t fully cooperate for us, I highly recommend that you check out their tours while visiting Sint Maarten. We paid $109 each for the tour, which included lunch. The tour lasted approximately six hours in length and if you’re arriving by cruise ship, they will work with your schedule. You can also book this tour if you happen to be staying on the island, too. It was a great deal as we were able to see many outlying areas along the coastline of St. Maarten all in one day. St. Maarten has good snorkeling, though not as great as I have seen at some other Caribbean islands. It is a really beautiful place and I encourage you to visit if you get the opportunity.

Here is a short video of our day spent snorkeling in St Martin:


Have you visited St. Martin before, and what did you do there?