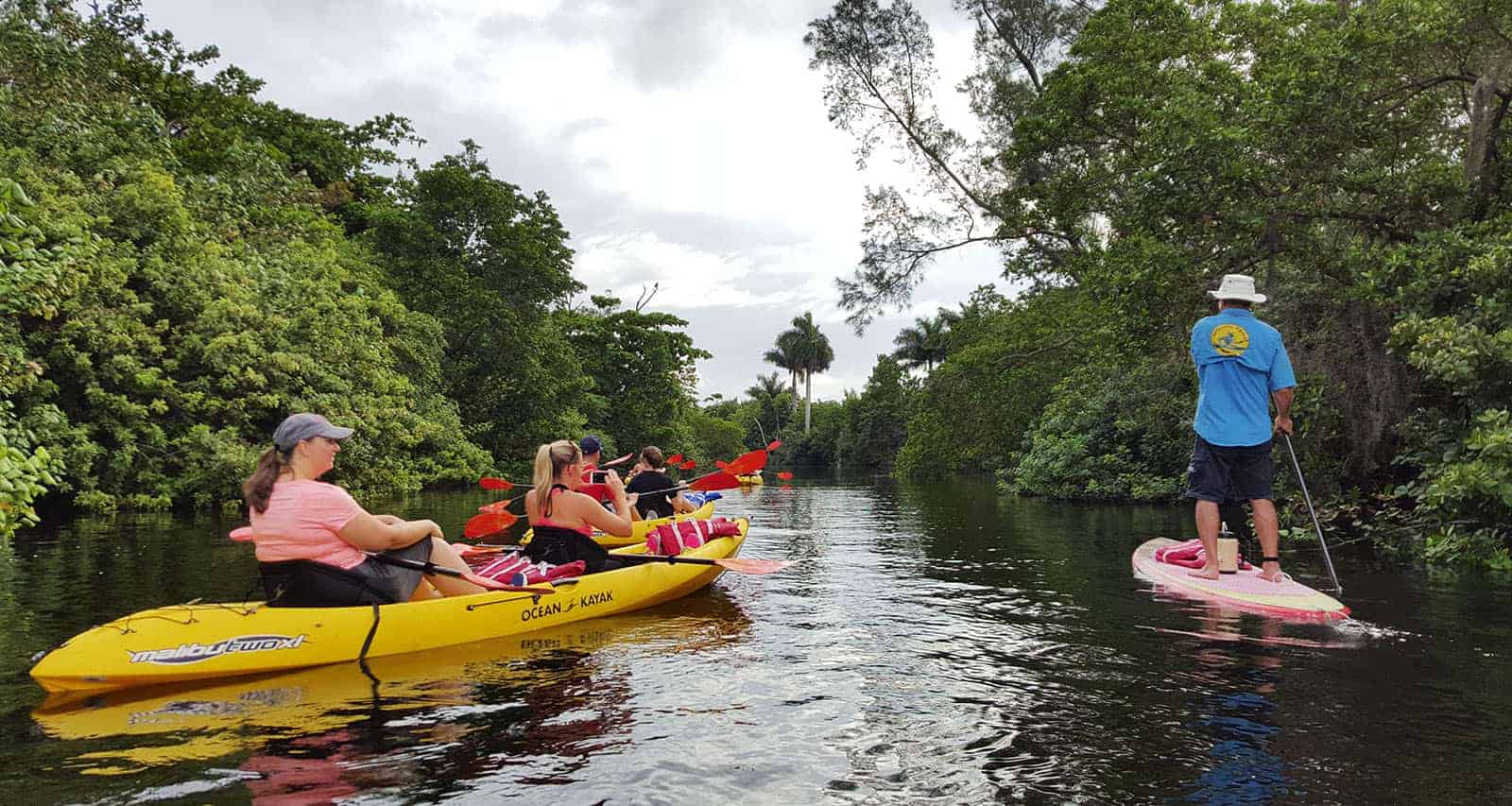 It was certainly a unique kayaking trip, navigating down the Middle River in Fort Lauderdale. Though primarily an urban landscape, there was a vast array of wildlife there.

One day before the TBEX started (a travel bloggers conference that I attended), small groups of bloggers were invited to discover various parts of Fort Lauderdale. As I’m interested in outdoor activities and nature, I chose to take a kayaking tour with Atlantic Coast Kayak. I love kayaking; Justin and I have taken a few kayaking excursions together. This one was different than others that I’ve tried in the past. On this Fort Lauderdale kayaking tour, we paddled down the Middle River, one of the main rivers that flows through the city.

We started our trip at Richardson Park in Wilton Manors, situated on the Middle River. We rode in tandem kayaks. My partner for the morning was Jessi from Outbound Adventurer, a travel blogging friend. We finally met in “real life” that day, and I was hoping that the whole tandem kayak thing wouldn’t be an instant friendship killer. Of course, we were totally fine and paddled with ease down the river and back together. 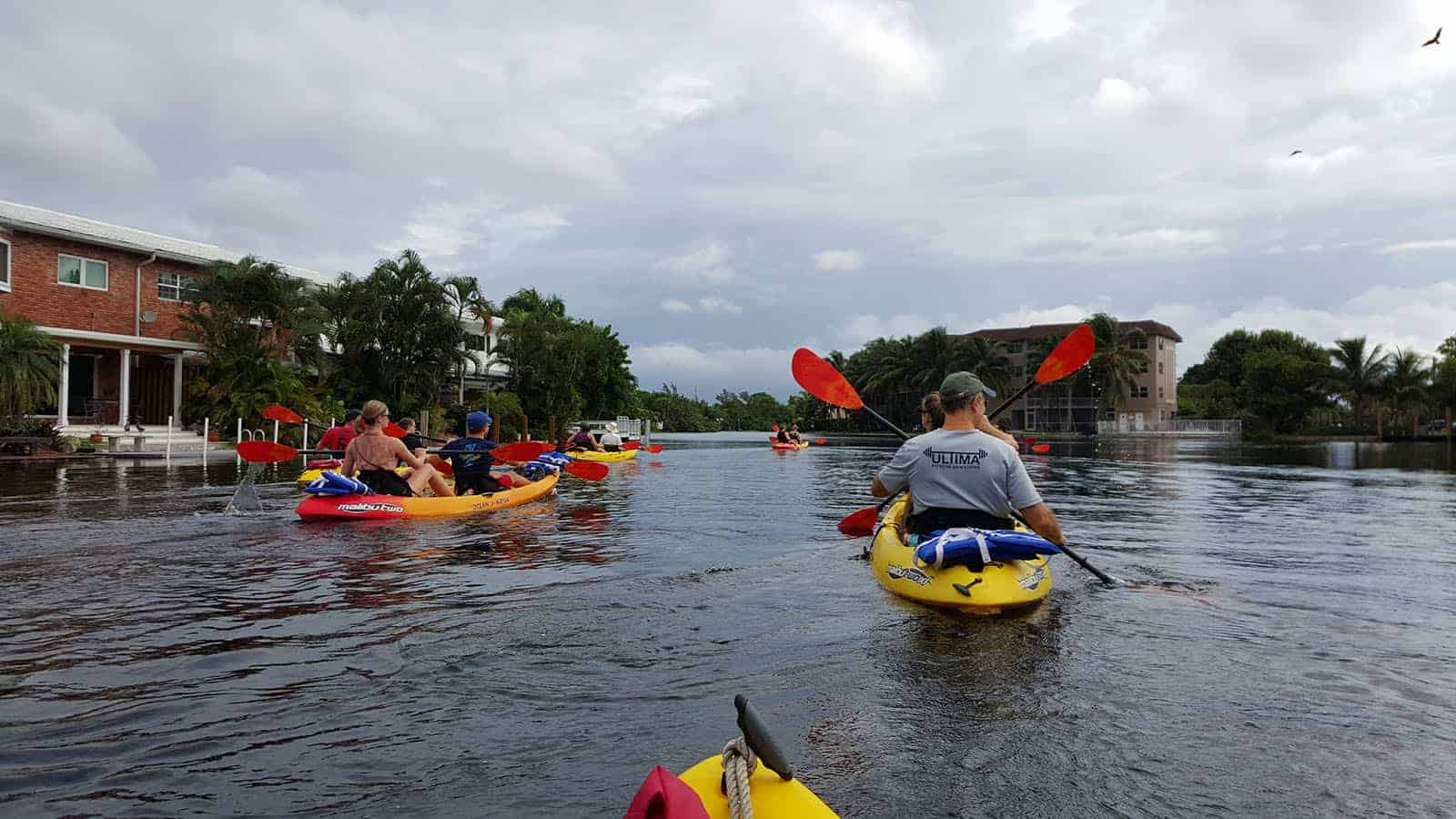 The river was very calm and peaceful. The lack of waves and boat traffic allowed for ideal kayaking conditions. As the river is located farther away from the ocean, it’s not affected by any strong currents. For some of he time, we drifted by houses and urban developments. I was in awe of how the water nearly flowed up to the homes. In some cases, it appeared as though the water could easily flood these homes with one more big rainfall. I would be completely paranoid if I lived there, although I’m sure that the locals are used to the water levels. 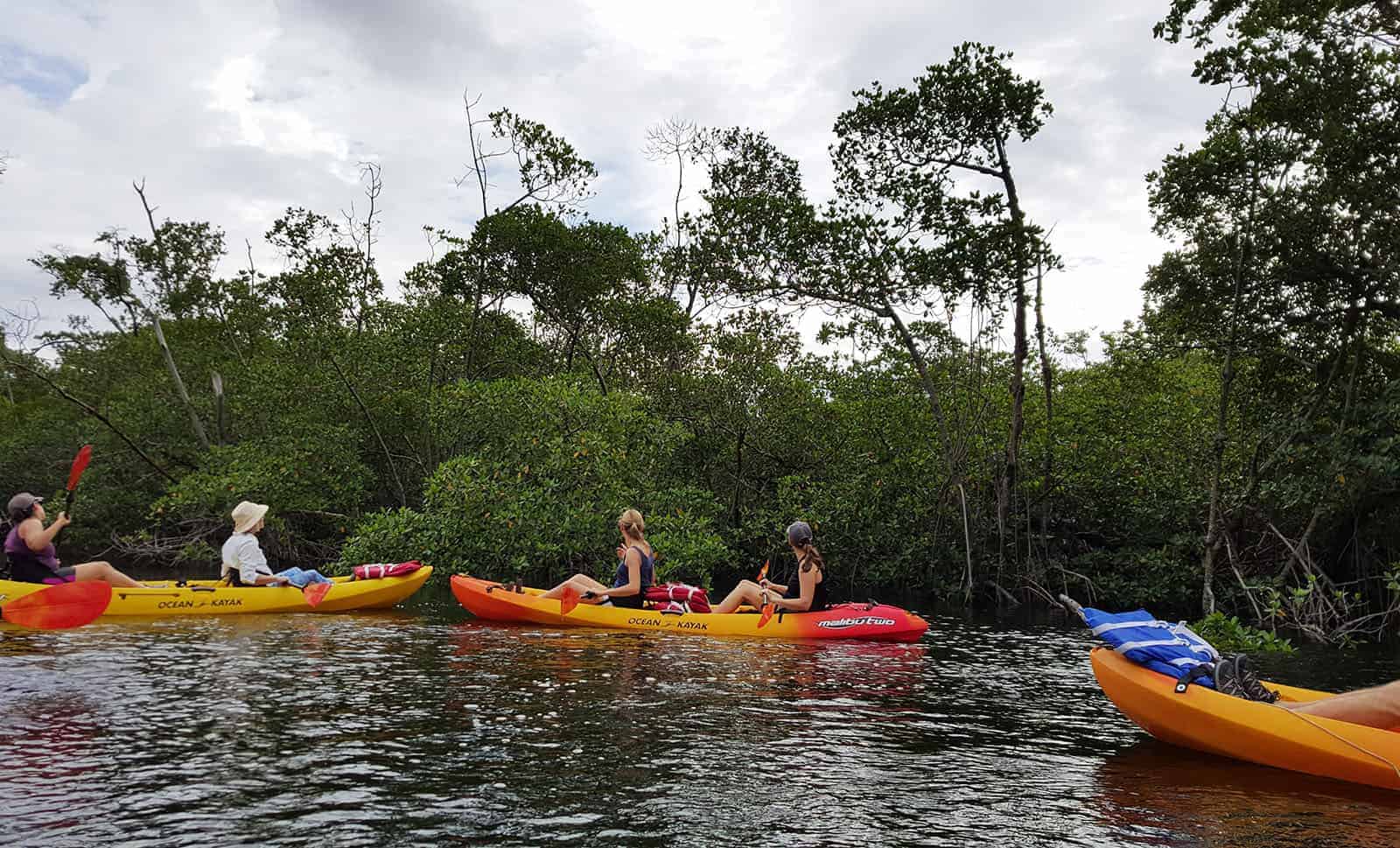 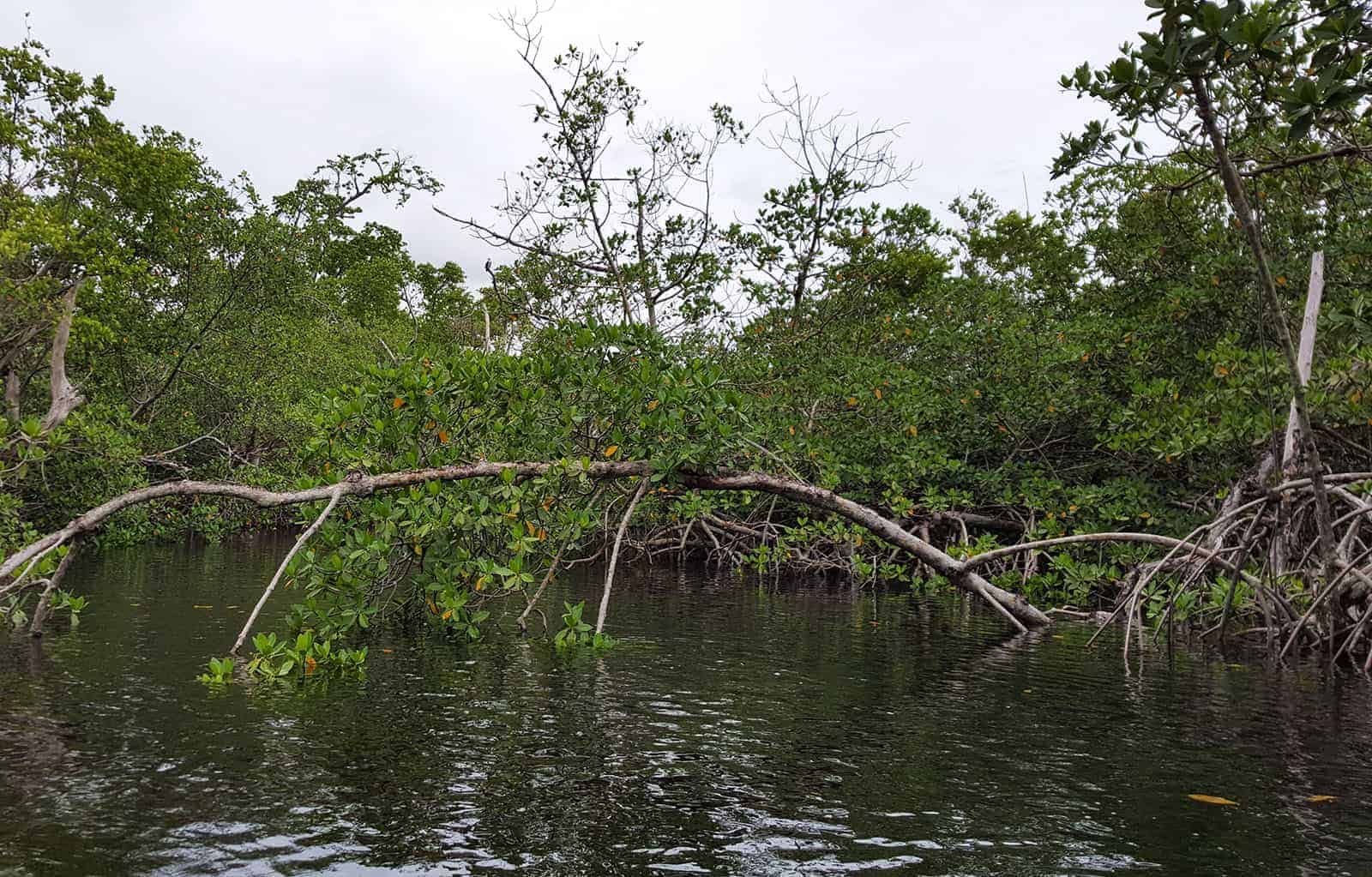 The group kayaked under several railway and road bridges. For some of the bridges, we really had to crouch down in our boats, which added to the fun. As we floated down the river, the buildings slowly dissipated and the lush greenery increased. We were kayaking past mangroves with their thick roots sprawling all around. These mangroves offered protection to wildlife, particularly for small fish and aquatic life that could hide between the underwater branches. We spotted lots of wildlife, including many iguanas and ducks. The area was also known for its osprey and assortment of birds, crabs, and fish. Several manatees come and go from Middle River, and some stay all year around. 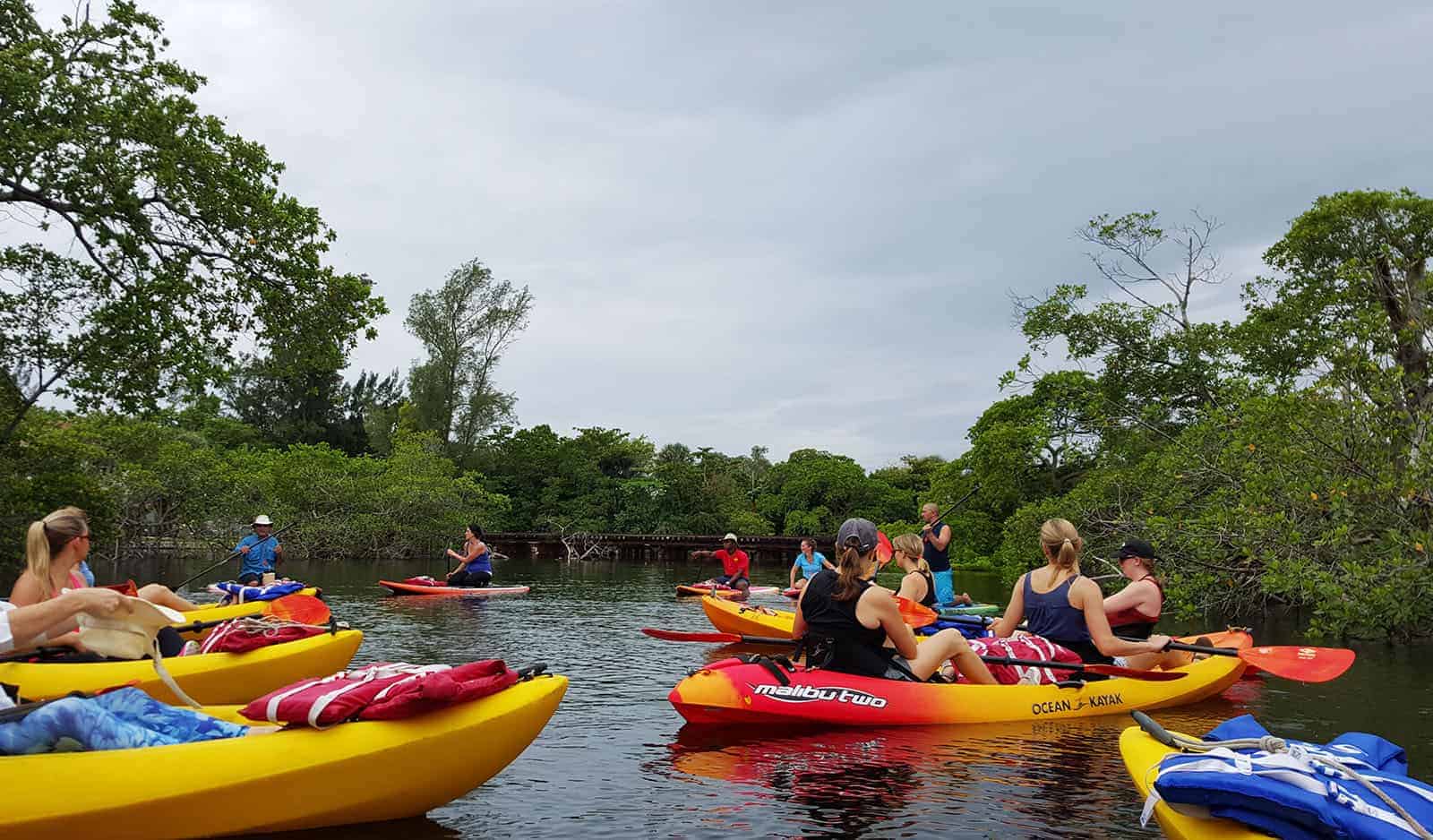 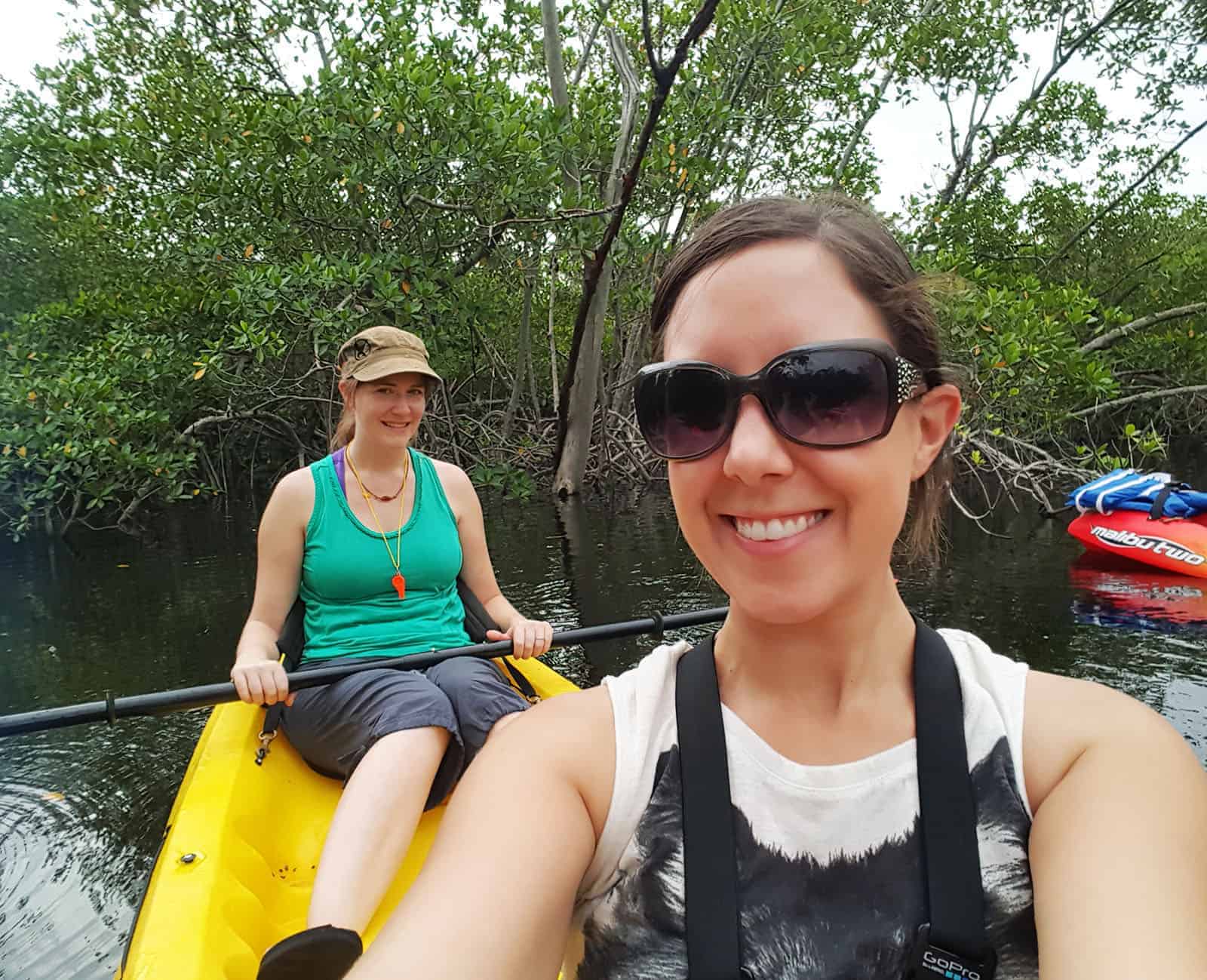 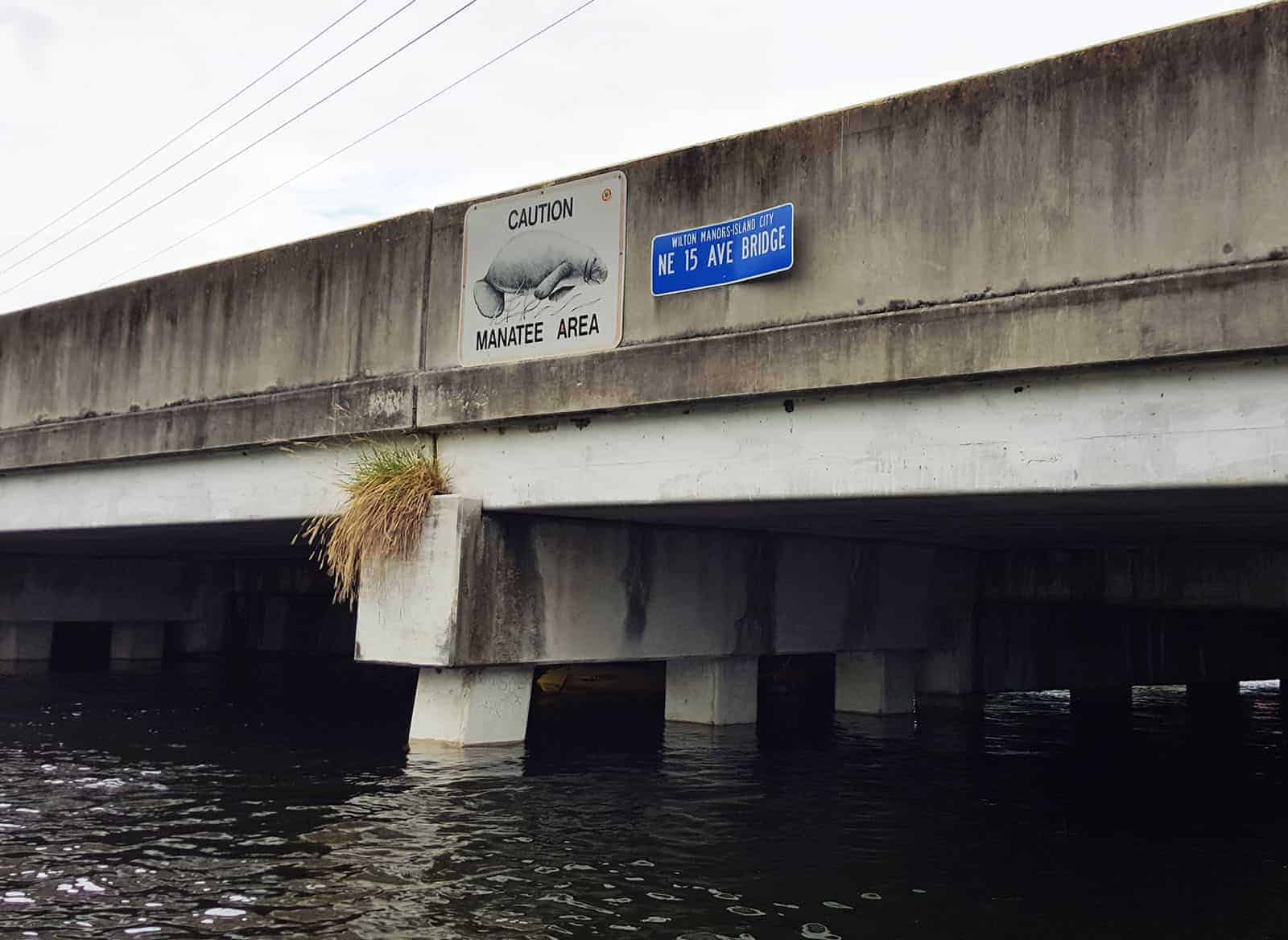 After two hours of paddling, my arms were feeling tired and the trip had come to an end. We were all treated to fresh coconut water with lime juice, which was super refreshing after all of that exercise. At the very end, we all raced down to the water’s edge because there was a manatee sighting. Even though I viewed just the top of its back, I felt very fortunate to have witnessed one of these gentle giants in its natural habitat. Despite being close to an urban centre, I’m glad that this section of the river was a “no wake” manatee zone. We need to take care of these creatures as much as we can. 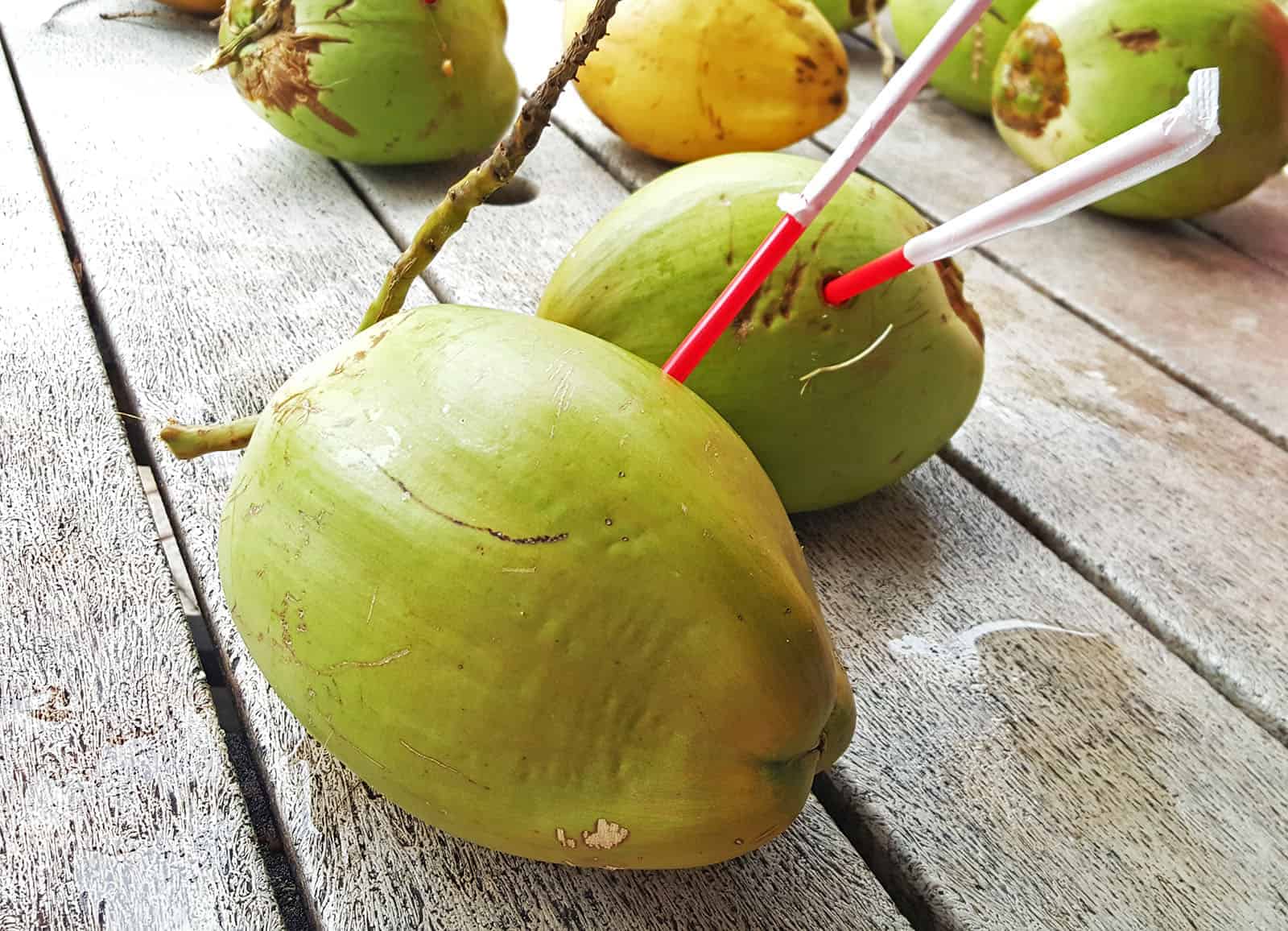 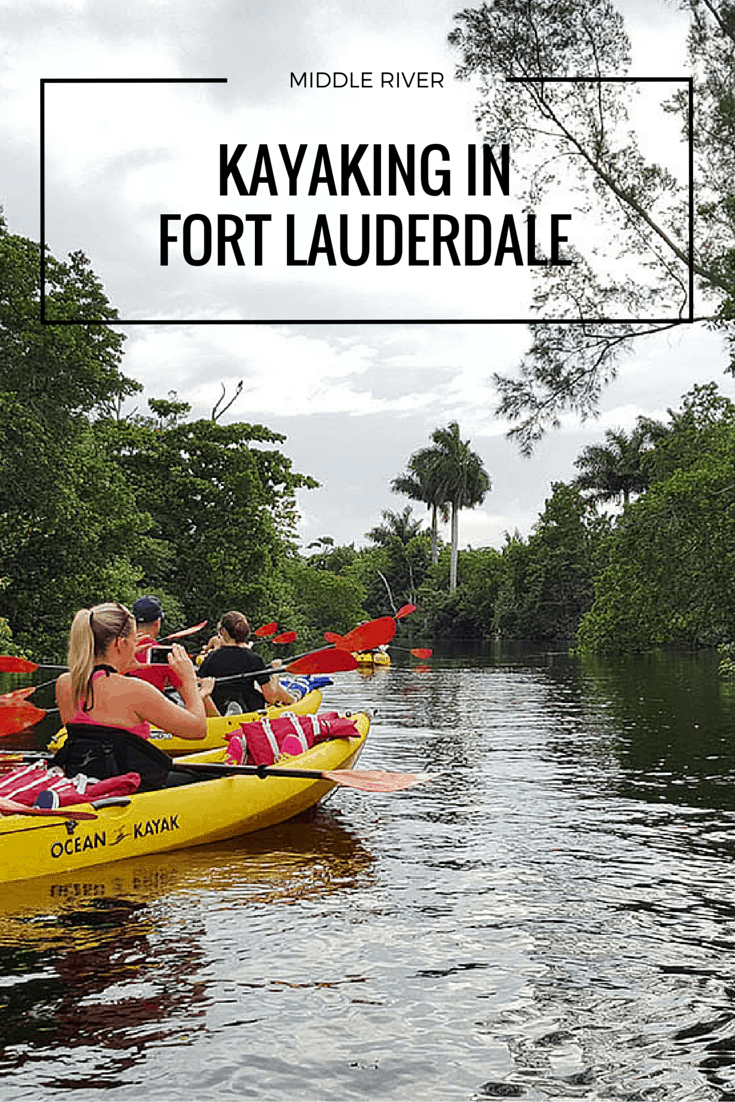 Great kayaking tour! Thanks for sharing your experience, I may try it soon! All the best!!

Nice share. I really enjoy kayaking tour. Seeing the wildlife from the kayak is truly amazing. I will take a similar tour next month with my friends at Fort Lauderdale.

At first I found this place on google and then decided to go there for kayaking. It's easily accessible and people around there are very helpful and friendly. Love this place and enjoyed my trip a lot.

Looks like you enjoyed a lot, Glad people are enjoying their lifes.

Looks like a great kayaking tour! So neat that you got to see lots of wildlife. I would love to see a manatee.