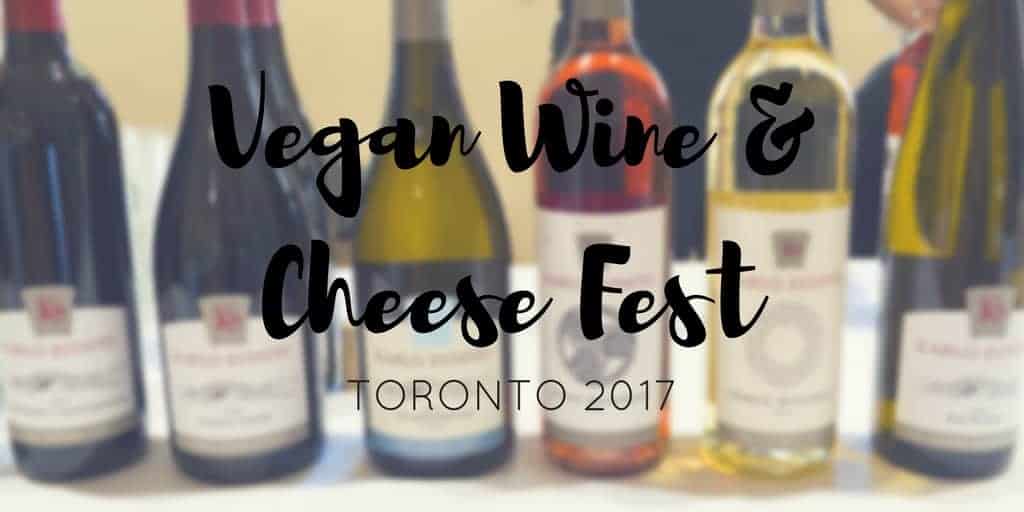 The first ever vegan wine and cheese festival in Toronto.

Just because you’re vegan doesn’t mean that you can’t miss out on a good wine and cheese tasting. And even if you’re not vegan, you should definitely explore this culinary world. Taste delicious cheese made mostly from nuts and you’ll fall in love. If you haven’t tried it yet, you don’t know what you’re missing.

For those who adore vegan cheese (like me) or for those who are vegan wine and cheese curious, the Vegan Wine and Cheese Fest in Toronto is the best place to treat your taste buds.

Hosted by Cooking with Kindness, the Vegan Wine and Cheese Fest is the first of its kind in Toronto. It’s an opportunity to sample local vegan wine, vegan cheese, support local vegan businesses, and attend cooking sessions. A portion of the ticket sales benefits Wishing Well Sanctuary, a local farmed animals rescue.

Let’s cover a few basics here before I get into talking about the event itself. 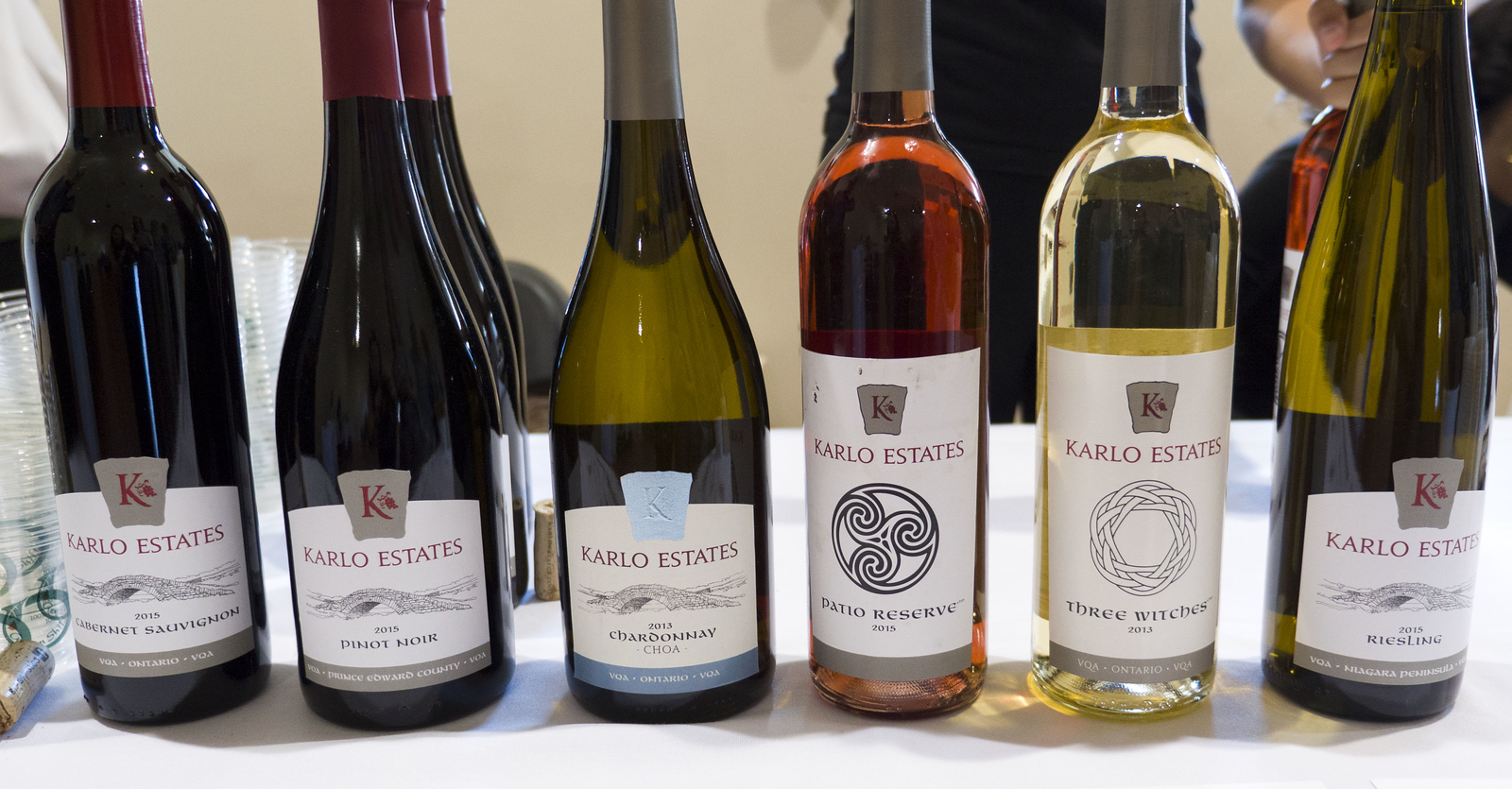 Some wines are vegan. However, many aren’t even vegetarian!

Of course, wine is made from grapes. But, as many winemakers want their wine to look clear without any sediment, wine goes through a clarifying process called “fining”. Traditional fining agents include casein (milk protein), albumin (egg whites), gelatin, and even fish bladder protein. Yuck!

Thankfully, there are other ways to clarify the wine without any animal products. Winemakers can use clay to get rid of unwanted proteins in the wine, and they can also use activated charcoal.

My favourite website to research which wines (and beer) are vegan-friendly is Barnivore. If you don’t see your favourite wine or beer on the list, you can contact the winemaker to ask them if they use animal ingredients to process their product.

WHAT IS VEGAN CHEESE?

Cheese is usually made from cow’s milk, but there are so many other ways to create cheese without any animal products. These cheeses come in many flavours, they are cruelty-free, and they are way healthier than dairy products.

Vegan cheese can be made from nuts (cashews, almonds, macadamia nuts, and others), nutritional yeast, tofu, and more. Add in additional ingredients like garlic, herbs, liquid smoke, hot peppers, olives, or sun-dried tomatoes, and you’ve got yourself a whole spread of tastiness.

Vegan cheese is becoming more and more mainstream. The Toronto Star recently ran an article about vegan cheese with a recipe so you can make your own. This is a recipe for one of my favourite vegan cheeses that I whip up around Christmastime – a vegan cheese ball.

The Vegan Wine and Cheese Fest in Toronto invited attendees to sample delicious vegan wines and cheeses prepared by local vendors. I went to the event with my sister, Robyn. With a glass of wine in our hands, we walked around the room and ate as much vegan cheese as we could.

Every vendor had full blocks of their cheeses available for purchase, including a few flavours that were created just for the event.

There were also a few tables with full meals made from vegan cheese. We could purchase one of these meals for an additional cost.

In addition, there were a few cooking demos, tastings, and talks throughout the afternoon. The schedule of events for the afternoon included: 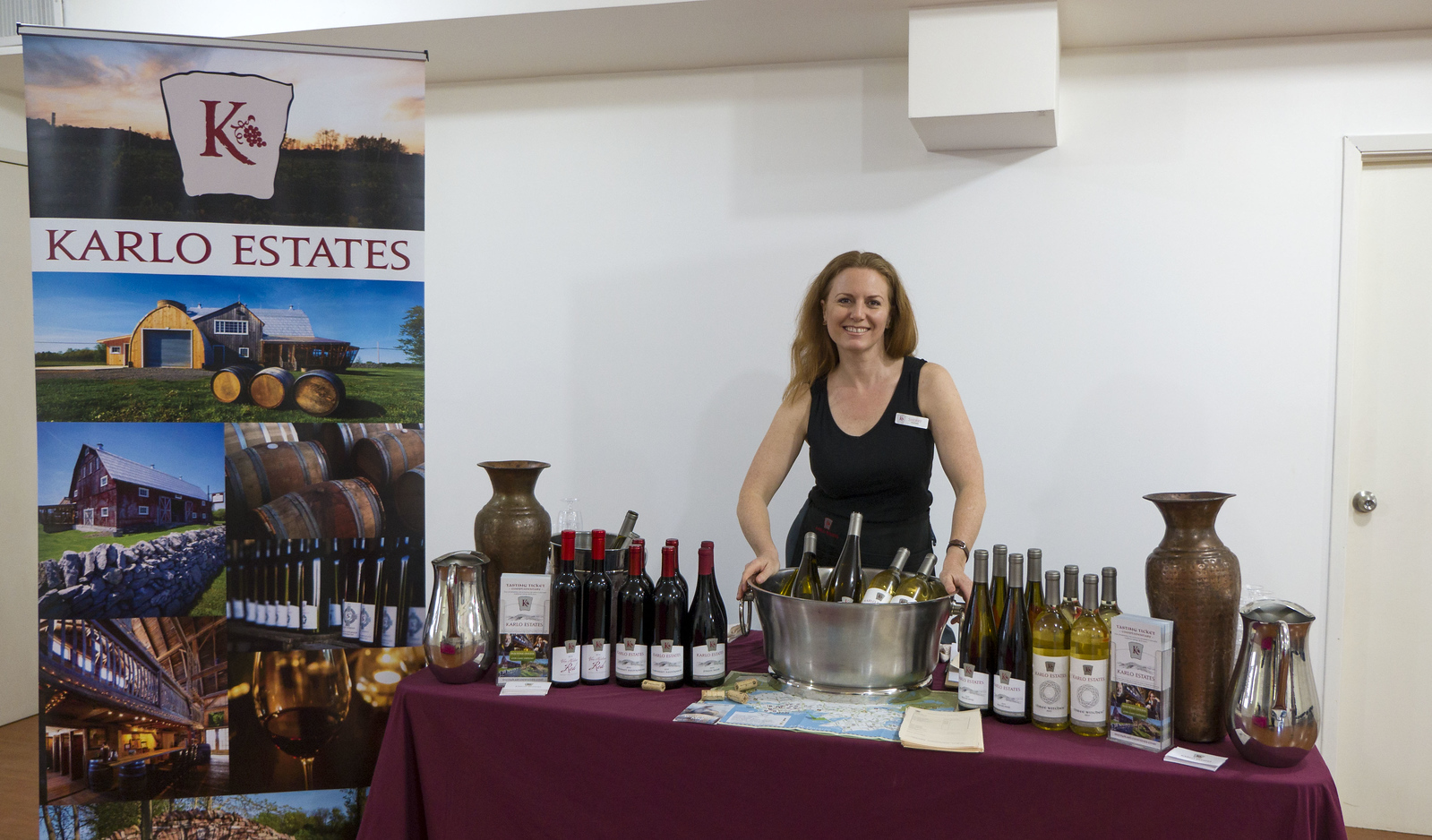 There was one vegan wine vendor at the Vegan Wine and Cheese Fest: Karlo Estates. They are the world’s first vegan certified winery, and they’re located in Prince Edward County, Ontario. I’m definitely going to have to make the drive up to visit soon!

Karlo wines are certified vegan by VegeCert who verified and confirmed that every process and ingredient is vegan. It’s actually more difficult to make vegan wine as there is less room for correcting mistakes. The extra care that’s involved means that there’s not as much of a need for adding those proteins (such as casein or fish bladder) to reduce bitterness. If Karlo Wines does need to add protein, they use pumpkin or potato. To clarify the wine, they use bentonite clay.

Many of their wines have won awards. I sampled several varieties and my personal favourites were the Three Witches and the Pinot Noir. While I’m not even close to being an expert wine taster, I thought the wine had rich flavours and it was delightful to drink.

Several local vegan cheese makers came together at the Vegan Wine and Cheese Fest in Toronto. I made sure to sample every variety at least once…or twice! I also bought a whole bunch of vegan cheese wedges so Justin and I could gorge on a platter of cheese at home.

You have to try this cheese if you live in the Toronto area. Many of these are available at farmer’s markets or shops throughout Ontario.

Also, make sure to come out to the Toronto Veg Food Fest as I’m sure that many of these vegan cheese makers will be in attendance.

Here are some of the ones I tried at the Vegan Wine and Cheese Fest: 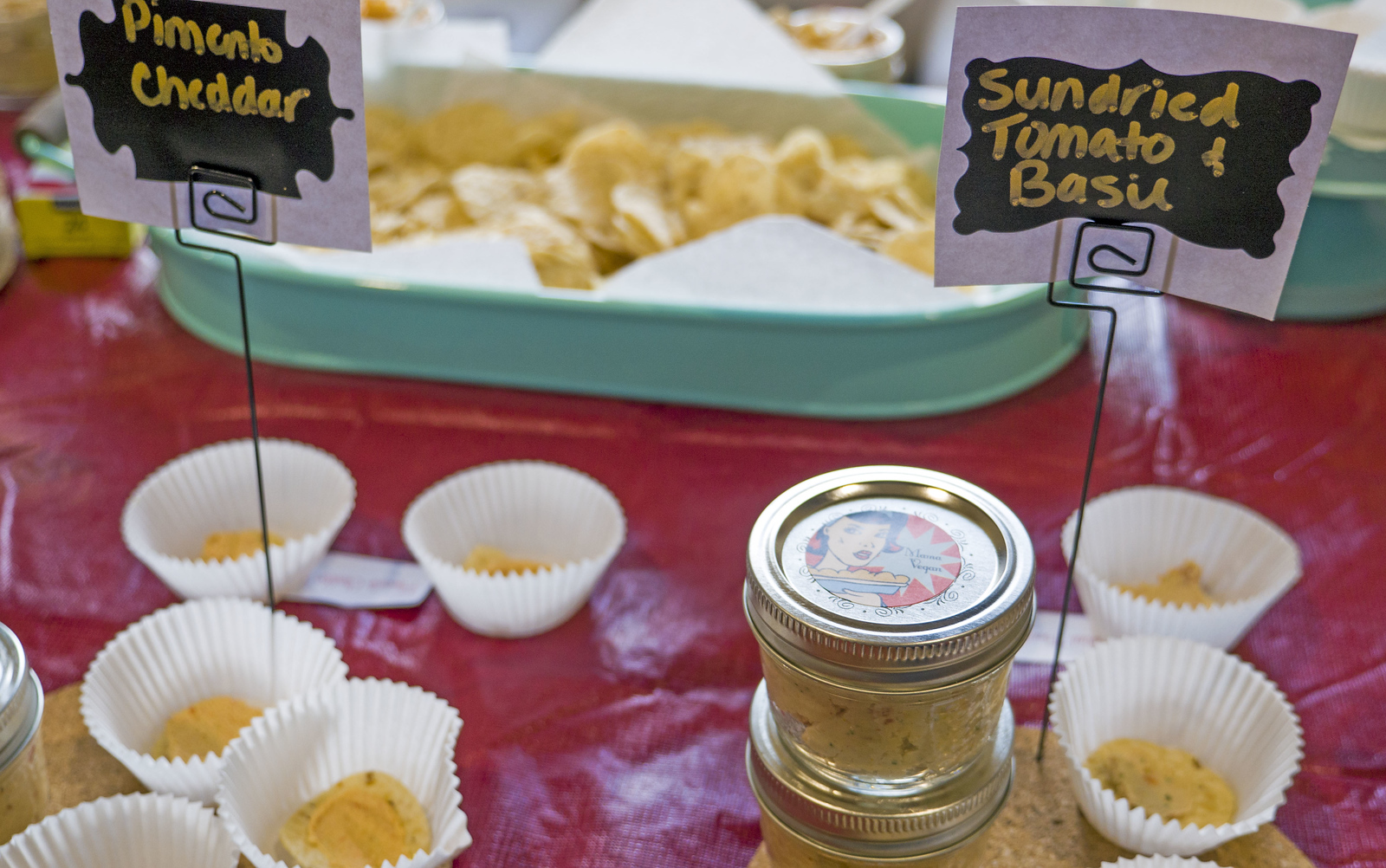 There were a few other vendors at the Vegan Wine and Cheese Fest with full meals to purchase.

First, if you aren’t into drinking wine, you could sample Tonica Kombucha. It’s produced and bottled right in Toronto, and it’s some of the best kombucha I’ve ever tried. Or they also suggested that their kombucha goes great with gin!

Chef Doug McNish also brought some of his delicious meals to the event. In keeping with the cheese theme, he offered polenta poutine, raw cheesecake, cheezy kale chips, and more! Unfortunately, I was a little too full to eat one of Doug McNish’s meals this time around. I’ve ordered full meals from his restaurant for vegan Thanksgiving and it was spectacular. His food is also a favourite at the Toronto Veg Food Fest every year. You can visit his Public Kitchen in Toronto, too.

NONA Vegan Foods sampled their cheese sauces, poured over pasta or nachos. As I’m a nacho fiend, I had to order a nacho cheese meal. Robyn got the pasta alfredo. Both were super satisfying and tasty. 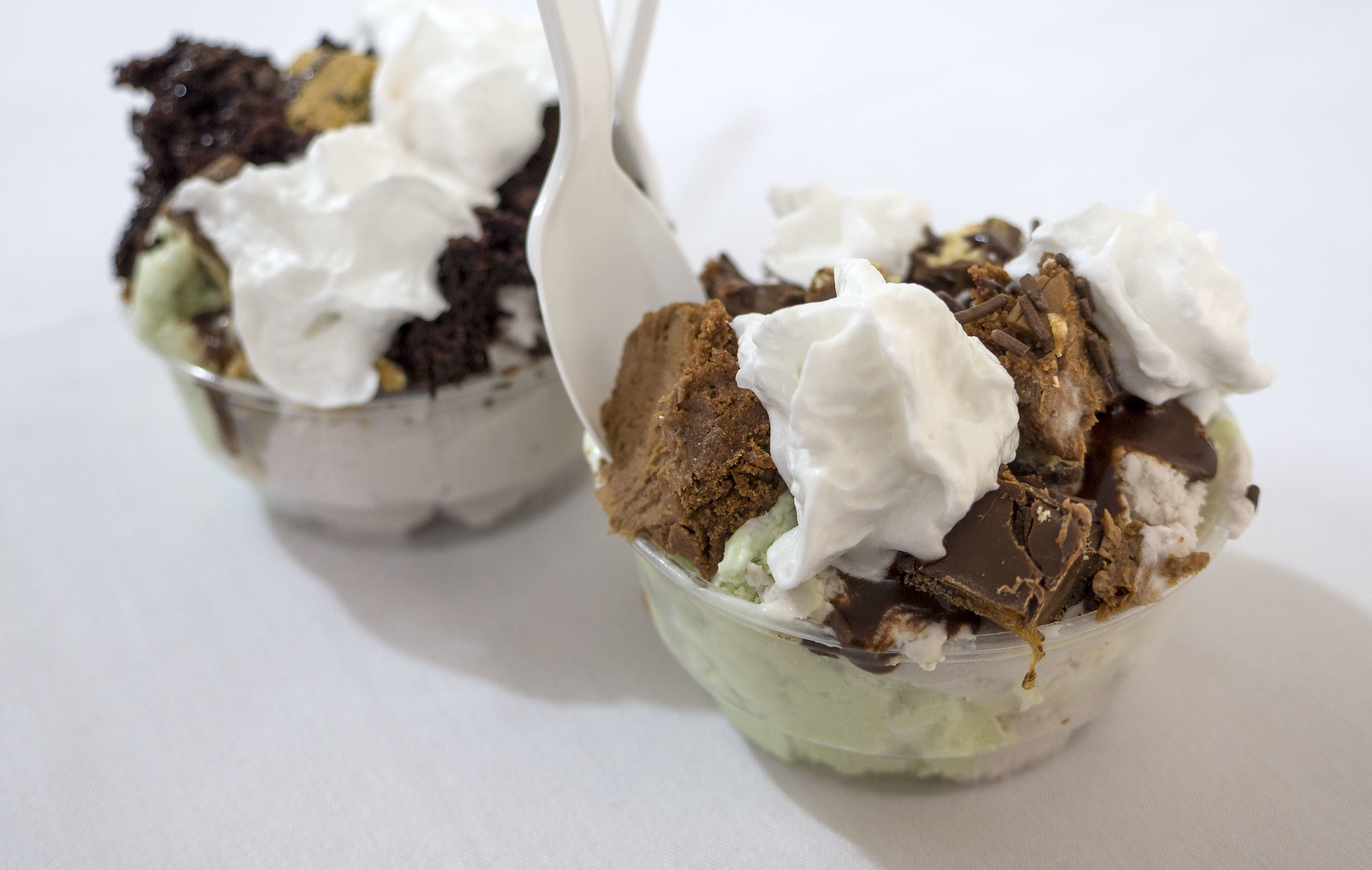 Robyn and I had a fantastic outing at the Vegan Wine and Cheese Fest, and I’m hoping that they’ll keep bringing this one back as an annual event. As we grow more compassionate for animals and the environment, as well as seeking a healthier lifestyle, vegan events like these will keep growing more and more popular.

I really don’t feel like I’m missing out on anything by not eating dairy cheese. I have so much yummy vegan cheese to eat that’s more creative and yummy than any dairy cheese I’ve ever eaten. Plus, I’m not hurting my own body by eating it, I’m not harming any dairy cows, and I’m not contributing to an industry that treats animals, the planet, and people with complete disregard.

If you’re interested, I wrote a personal article a little why back about Why I’m Vegan – Reasons for a Plant-Based Lifetsyle. Check it out if you have a moment! 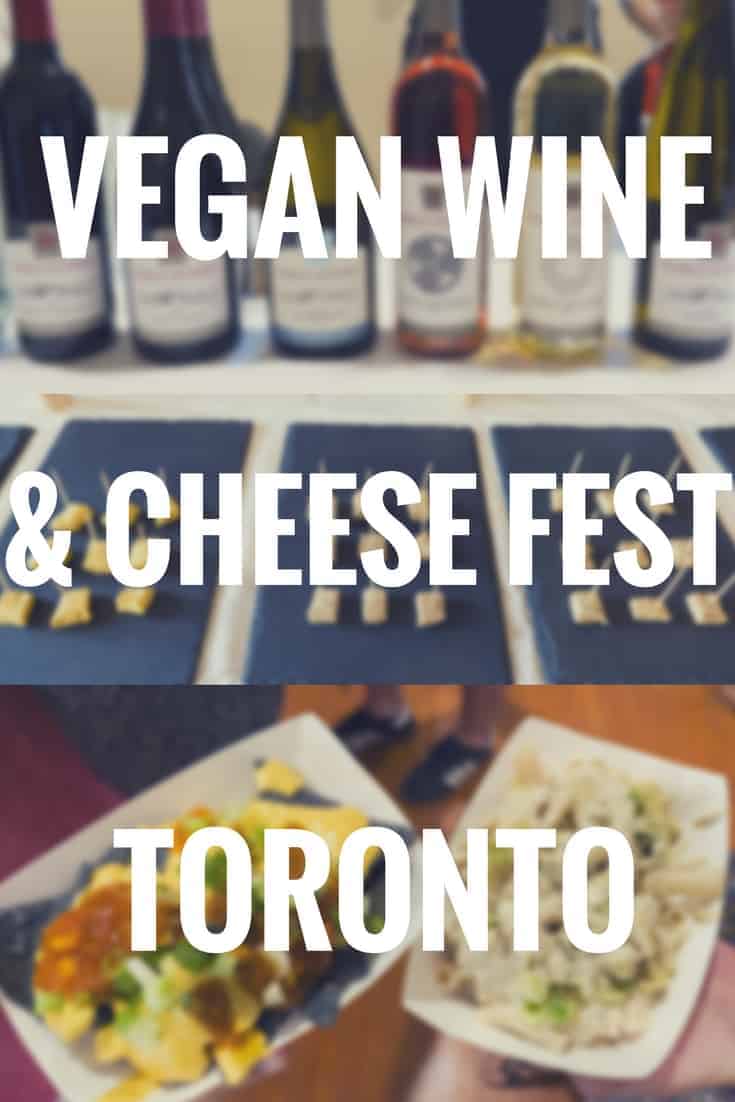 Have you ever tried vegan cheese before? What’s your favourite vegan wine?

Really, All wines are not vegetarian. I was reminded that all wines made of veggies and fruits but you cleared my thinking about Wines. From now I'll check the contents every time before drinking the wine. Otherwise, thanks for informing us.

Is it really "cheese" if it's vegan though. I mean, I'm sure vegan cheese is really yummy, but doesn't calling it cheese sort of defeat the purpose?

The looked like a successful event, the food and wine look delicious to eat and drink. Thank you so much for sharing this one. :)

This looks like an amazing event! I had no idea that wine some wine included those nasty animal ingredients. Thanks so much for that link to check out which ones are vegan.

We turned vegan on January 6, 2017, a date we will always remember! Life-changing in SO many ways! Didn't see it coming but we couldn't be happier. We also posted a series of articles on why we turned to the lifestyle. I can't wait to read your reasons, but I suspect I might already know some of them!

Sounds like you had a blast! It all look so yummy - and if you need a wine-o partner in crime for the trip to Prince Edward County, hit me up! :)