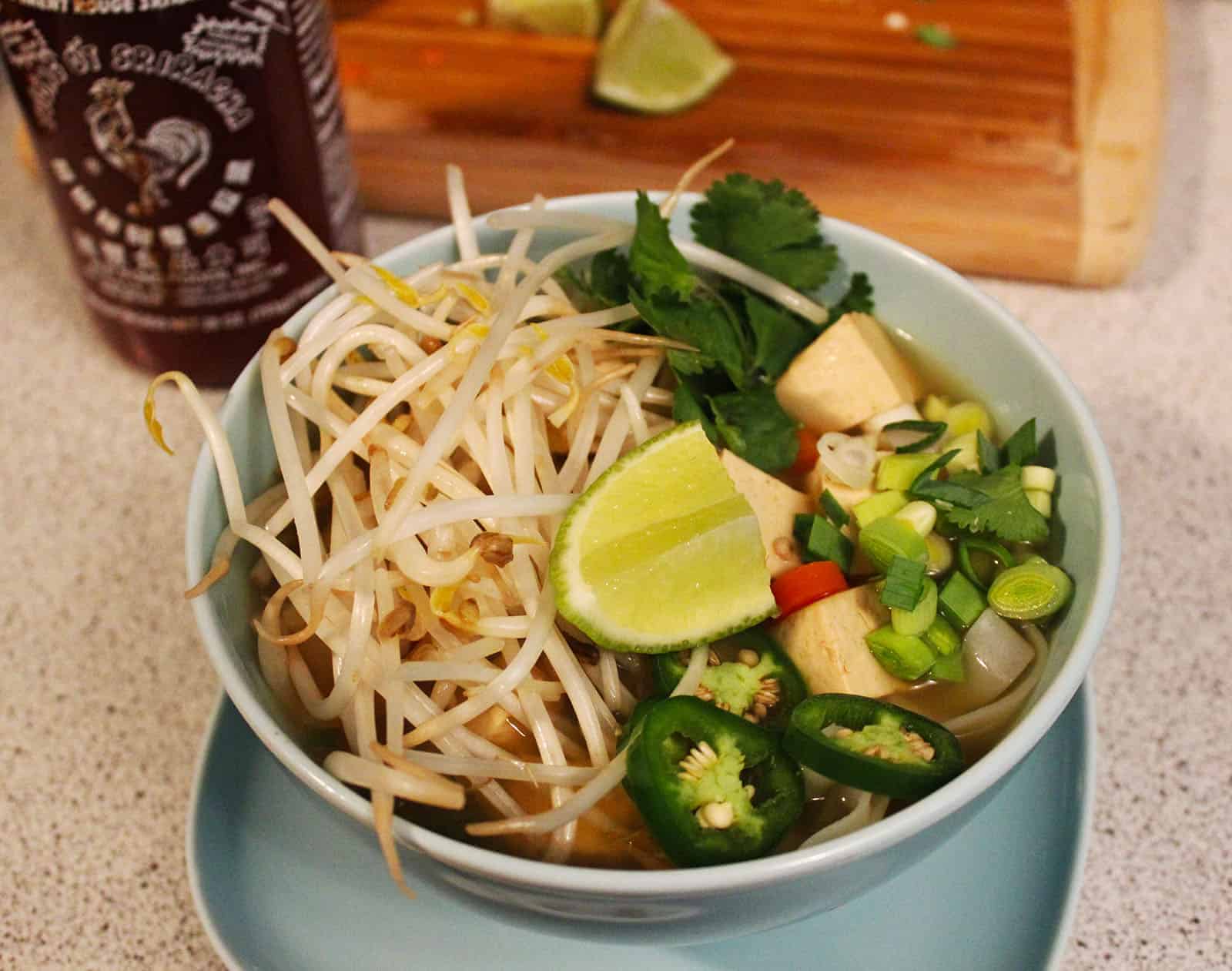 I’ve never been to Vietnam, though I’d love to visit. For those of you who have visited Vietnam, I’m sure that at some point you tried some Pho. Pho is a Vietnamese noodle soup consisting of broth, wide rice noodles (called Banh Pho), herbs, and typically, meat. Usually, it is prepared using beef or chicken. It is a popular street food in the country, though the dish is enjoyed worldwide.

I’ve attempted to recreate the flavors of this sumptuous dish in my own kitchen in Canada using tofu in place of meat, ginger and lemongrass to season the broth, and various garnishes including jalapeno peppers, bean sprouts, cilantro, onions, and lime wedges. As a vegan pho meal, I feel that it really captures the spirit of this traditional Vietnam dish!

Depending on how much spice you like, you may want to use additional Sriracha sauce on top. I cooked half of the jalapeno slices in the broth and used the other half as a garnish. The jalapenos that simmered in the broth really added some extra heat to the soup. Also, if you use a low-sodium vegetable broth, you might want to add some salt or Herbamare seasoning. 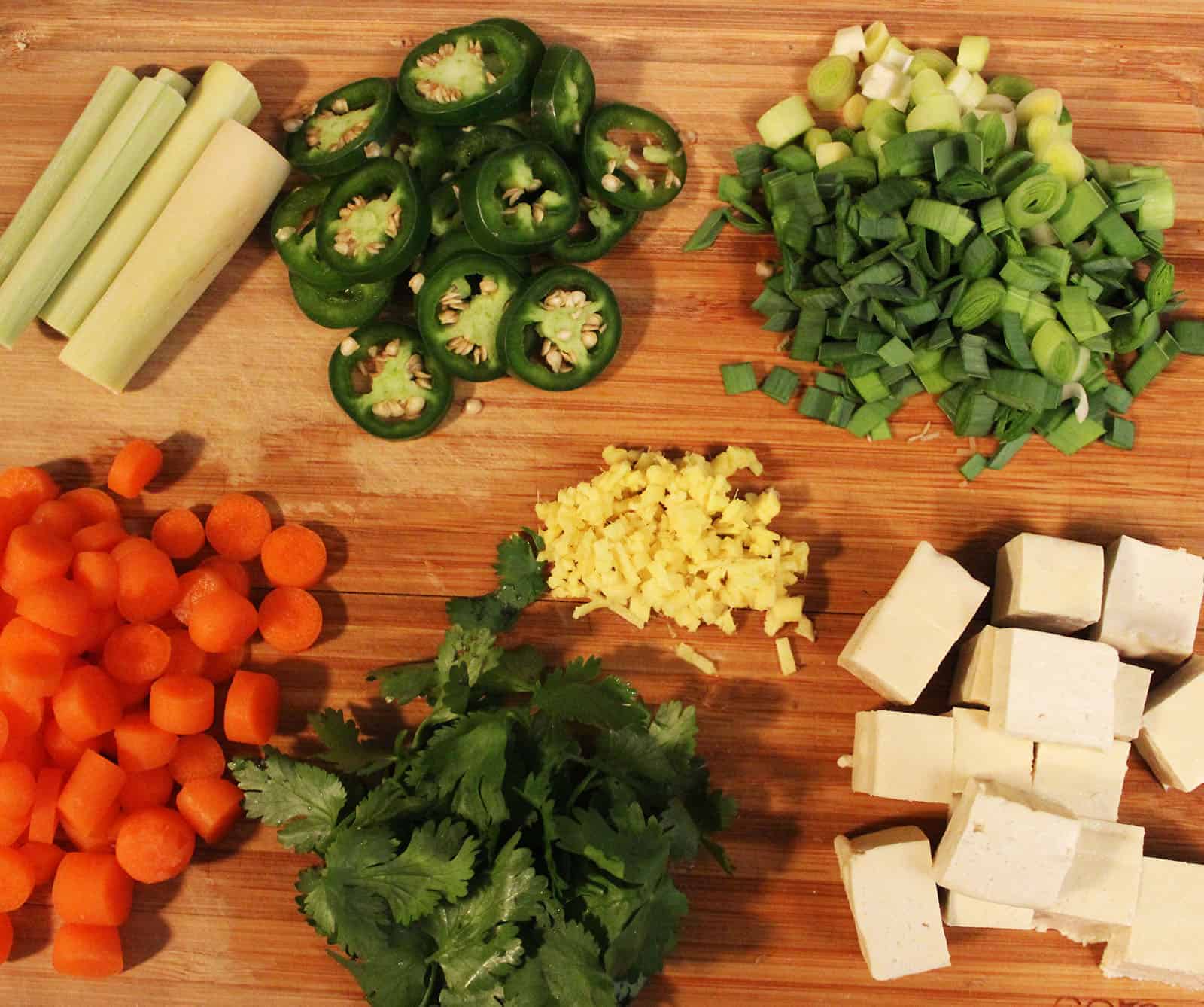 The first step is to chop up all of your veggies and your garnishes. As you can see, I’ve used carrots, ginger, lemongrass, cilantro, jalapeno peppers, and tofu. The lemongrass is used to flavor the broth and is removed before serving the soup. Not pictured here are the bean sprouts and the lime wedges. 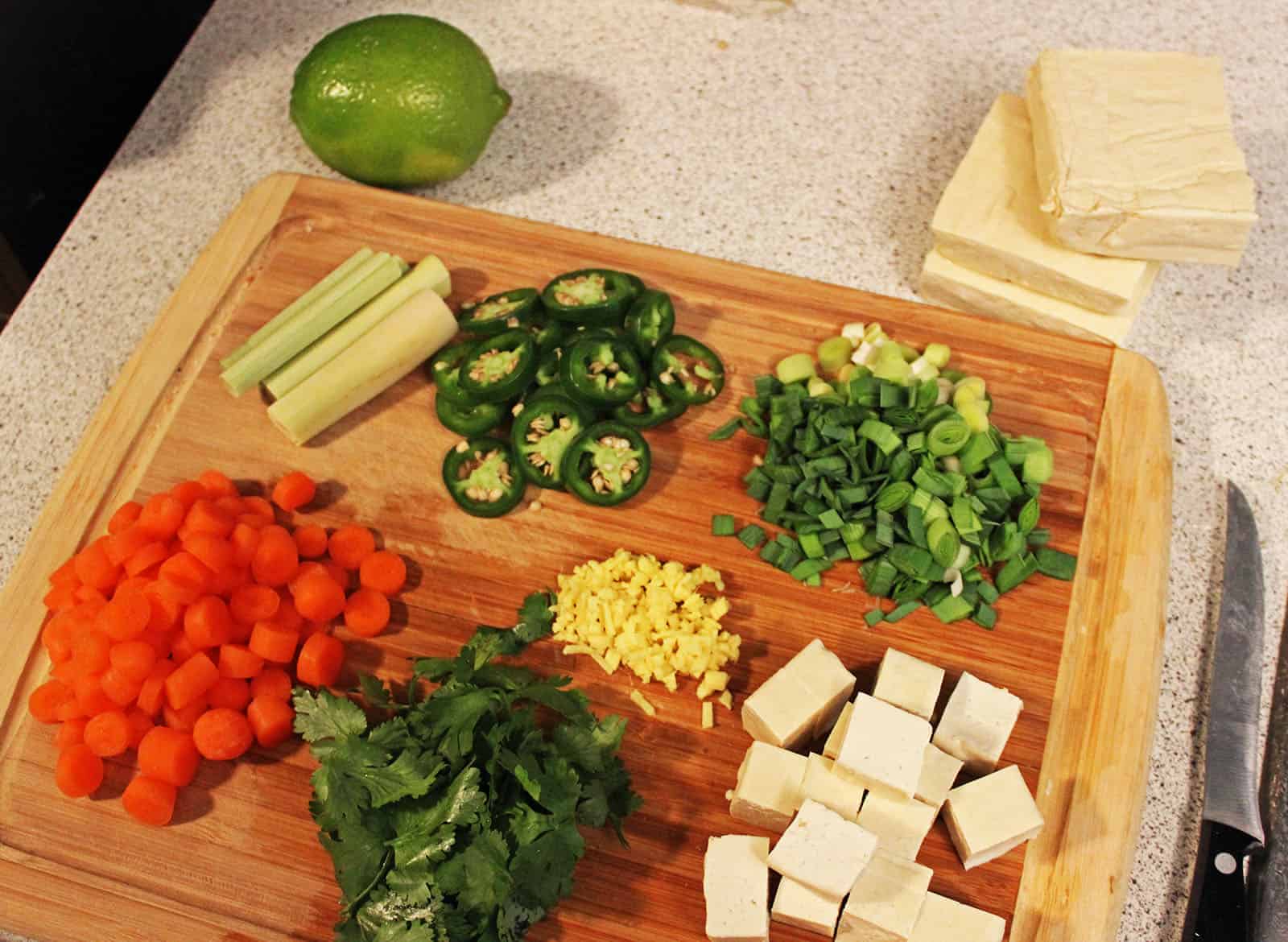 Once you’ve prepped all of your veggies, you can bring your broth to a simmer. Add the lemongrass, ginger, carrot, half of the jalapeno peppers, a few sprigs of cilantro, and the tofu. 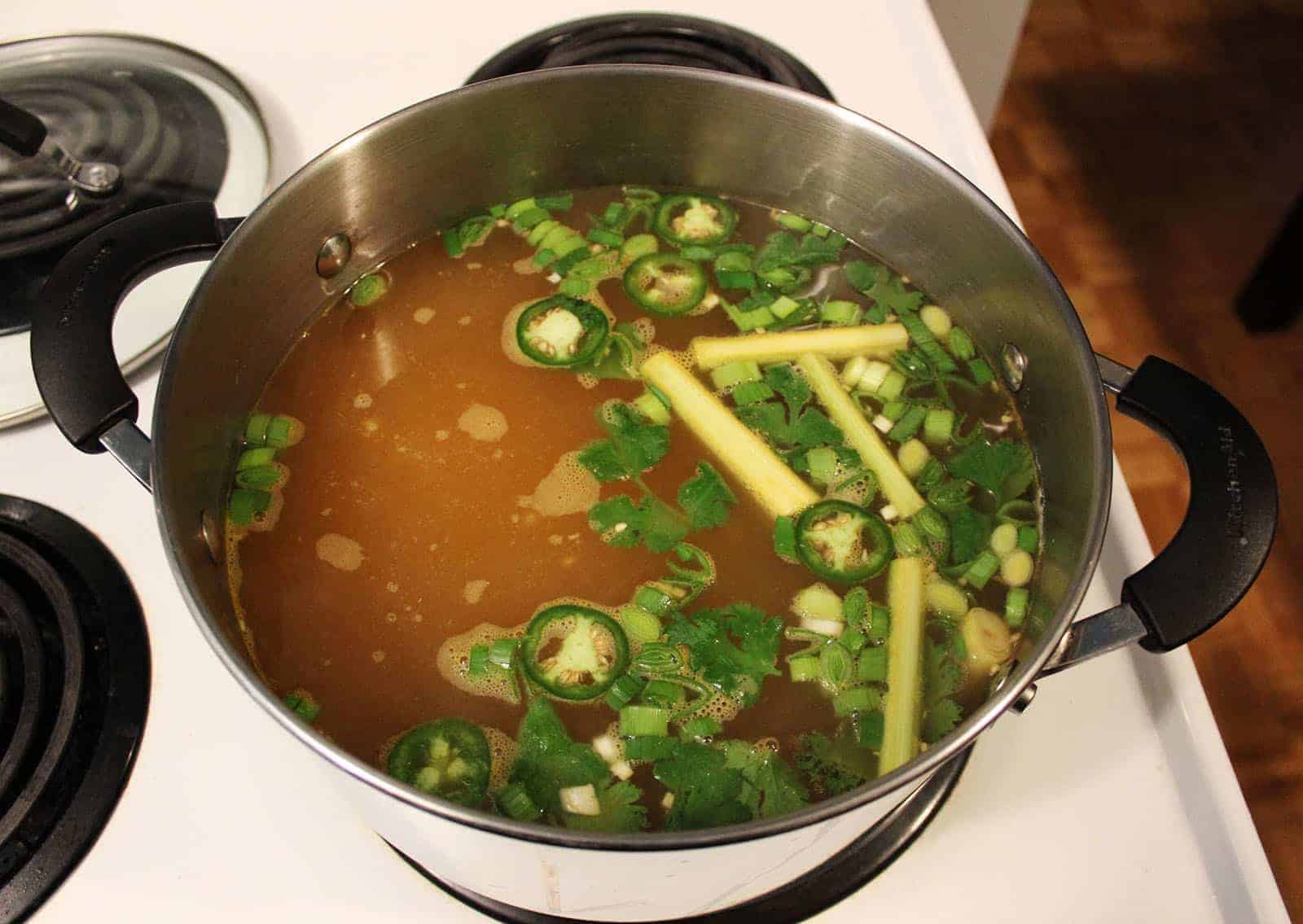 And if you’re like me, you’ll have a curious cat watching you cook! Chickpea loves sitting on the kitchen table, observing the entire meal preparation. 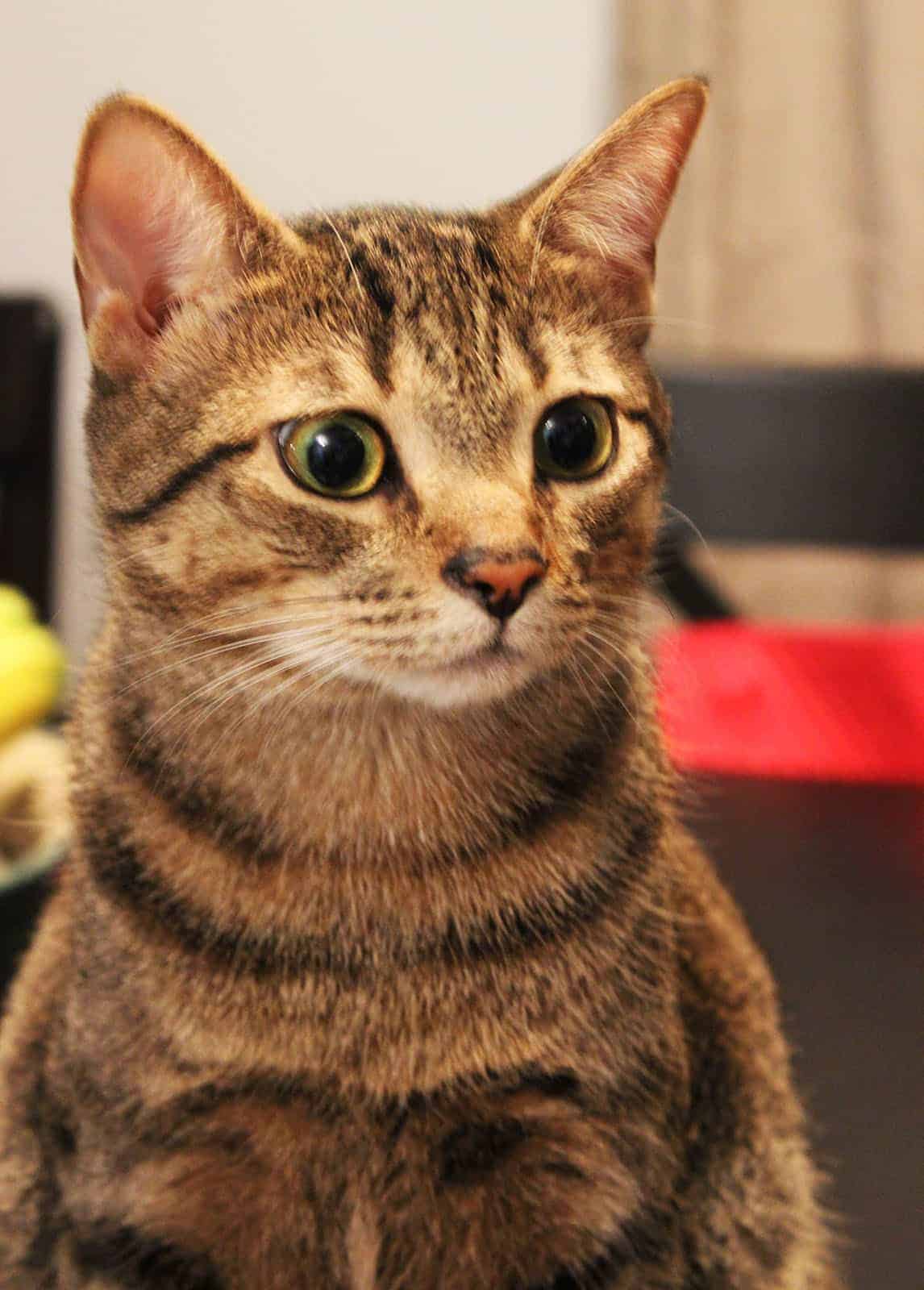 Prepare your rice noodles according to the package instructions before you simmer the broth. I cooked the noodles while I was chopping up all of the vegetables. Place the noodles in the individual serving bowls. 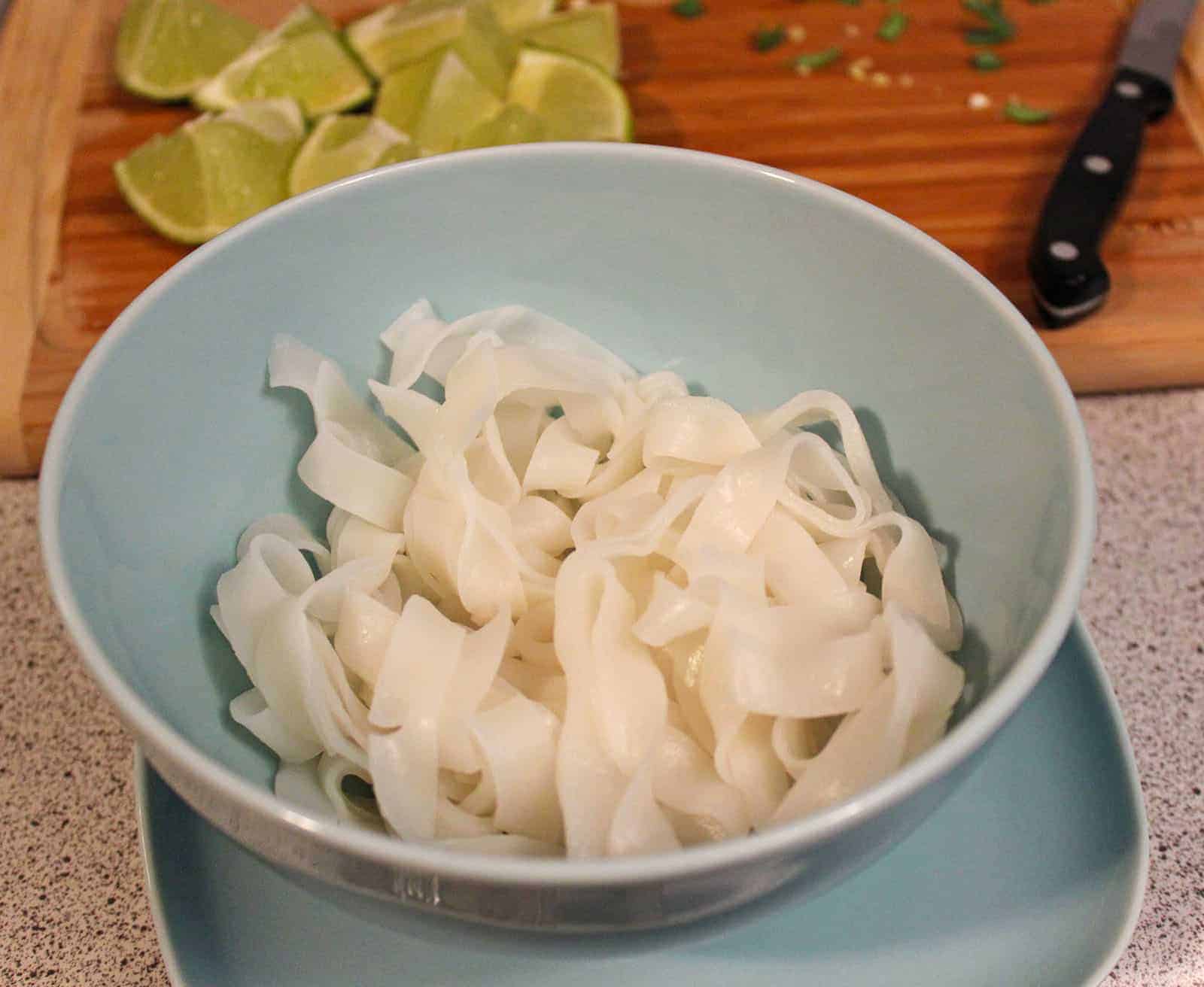 Once the soup has finished cooking, scoop out the lemongrass segments and pour the broth over top of the noodles. Add your various garnishes, and you’ll be ready to go! This soup is very easy to prepare and doesn’t take a long time to make. 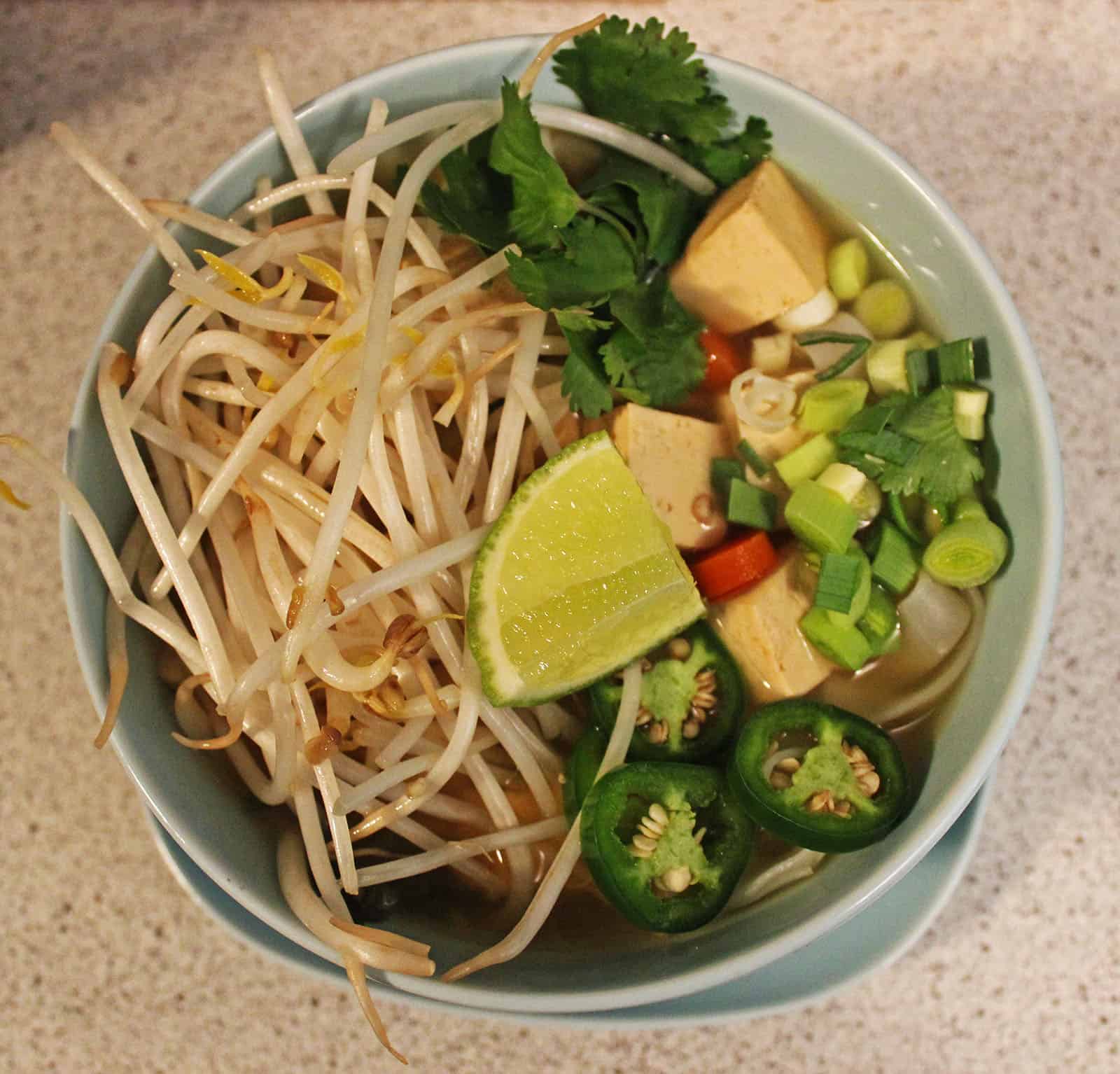 1. In a large pot, place broth, lemongrass, ginger, carrot, half of your jalapeno slices, tofu, and a few sprigs of cilantro. Bring to a simmer, and then cover and cook for 10 minutes. Season the broth if needed with salt or Herbamare.

2. Divide the noodles into bowls. Remove the lemongrass from the soup. Ladle the broth into bowls. Top with more cilantro, bean sprouts, jalapenos, and green onions. Serve with lime wedges and Sriracha on the side.

And that’s it! You’ve made yourself a delicious, warm, soothing bowl of Vegan Pho. Enjoy!

This post has taken me right back to Vietnam! Seeing those ingredients again, and I can almost smell the soup in that last picture! :) Really looking forward to trying out this recipe, we're always on the lookout for fantastic veggie food.

And I have to say... Chickpea is ridiculously adorable!

Delicious and so simple. Wish I weren't in an airport and could have some right now.

I hope you can try it when you return from your travels or have access to a kitchen! :)

The food I tasted in Vietnam was honestly some of the best food I've eaten anywhere in the world and whilst I'm not vegan myself, I absolutely LOVE tofu so would be delighted to try out a tofu-based Pho! Thanks for sharing this recipe! The thing I love about Pho is that aside from how totally delicious it is, it feels so wholesome and healthy too :)

You'll have to let me know if you tried it, and what you think!! This dish is really tasty and super healthy :)

Looks delicious guys! You don't need to fry the tofu first? Just boil right in with the other soup ingredients?

Nope, you don't need to fry the tofu first! If you want it to be on the crispy side, you could fry it, but it isn't necessary :)