It was another amazing celebration of vegan food!

It’s no secret that I really look forward to the Toronto Veg Food Fest. Like so many others, I like to call it, “Vegan Christmas.” It’s an annual free event at Toronto’s Harbourfront Centre, organized by the Toronto Vegetarian Association. Veg Food Fest takes place on the second weekend of September from Friday to Sunday. This year, I attended on Friday because I had to work all weekend. I’m starting to realize that I need to book off the entire weekend. There’s way too much food to eat all in one day. I would need like, five more stomachs, at least!

I’m going to show you a very small sampling of what you can expect to eat at Veg Food Fest. After all, this event is all about the food!

There were so, so many other food stands that I needed to try…except, I was too full!

Tip: If you can’t go all weekend long, check it out on Friday. It starts at 4pm and the earlier you go, the better. There are way less crowds, way more food left, and you won’t have to wait in big line-ups!

So Delicious was sampling their cashew milk ice cream, Salted Caramel Cluster. It was incredible. I have to admit that I’ve bought this one before, but I couldn’t resist trying a free sample! I was also able to snag a free product coupon since I was there so early. Score.

A festival favourite, Apiecalpyse Now brought their famous pizza slices, pies, and treats. I couldn’t resist their rainbow shortbread box. I haven’t had shortbread since going vegan, plus the cookies are all different colours! I was tempted by the marshmallows (love the labels), but decided to buy some sweets at other booths. I have had them before and they’re super tasty, without the gelatin that’s typically in marshmallows. I also bought a slice of the ‘Zachos pizza for dinner. Zachos is…pizza and nachos. Nachos and nacho toppings on top of a pizza. It was one of the best slices of pizza I’ve ever had.

GUSTA is a new vegan company based out of Montreal, making veggie sausages and vegan cheese. There were samples to try and everything was super delicious. The sausages were bursting with flavour. I can’t wait to find it in stores and bring some home. The cheese was melty and scrumptious. It isn’t available to buy in stores just yet, but I’m going to keep my eye out for it. A girl can’t have too much vegan cheese, am I right?

Earth Island makes the popular vegan mayonnaise, Vegenaise. They were giving away samples of their vegan hard cheese. Let me tell you, there’s really no difference in texture and taste between this slice of Earth Island Provolone and the dairy version. It’s great with crackers or even on its own.

I was excited to finally try Veggemo, a brand new plant-based milk on the market. It’s made from pea protein, tapioca, and potato. Veggemo is free from most allergens like gluten and soy, and of course it’s dairy free. The beverage was smooth and creamy, and the company was giving away free cartons to take home.

After all the food, I was thirsty! Thankfully, Tonica Kombucha was there to quench my thirst. I nearly downed one of their bottles of blueberry kombucha. Delish!

Alright, this isn’t food. But, there are vendors at Veg Food Fest selling all kinds of vegan products that aren’t edible. Sudsatorium makes cruelty-free, fair trade, and chemical free bath and body products that smell amaaaazing. I brought home bubble bath, body wash, and soaps for both body and face. 5% of all proceeds go to grassroots charities.

Tori’s Bakeshop is one of my favourite bakeries in the city, and they always bring a great selection of treats from their shop. I brought home a few of them for Justin since he couldn’t go to Veg Food Fest this year at all. I also didn’t mind having a few extra baked goods around the house. Who could resist these donuts, cupcakes, or cupcakes with donuts on top (the best of both worlds)?

We bought their cheese last year…ate it that night…and then I returned the next day to buy more. Of course, I had to buy one of each. Their vegan cheese is amazing. Wood and Water even had these fried cheese balls, so I had to try them, too. Like I said before, a girl can’t get enough vegan cheese! 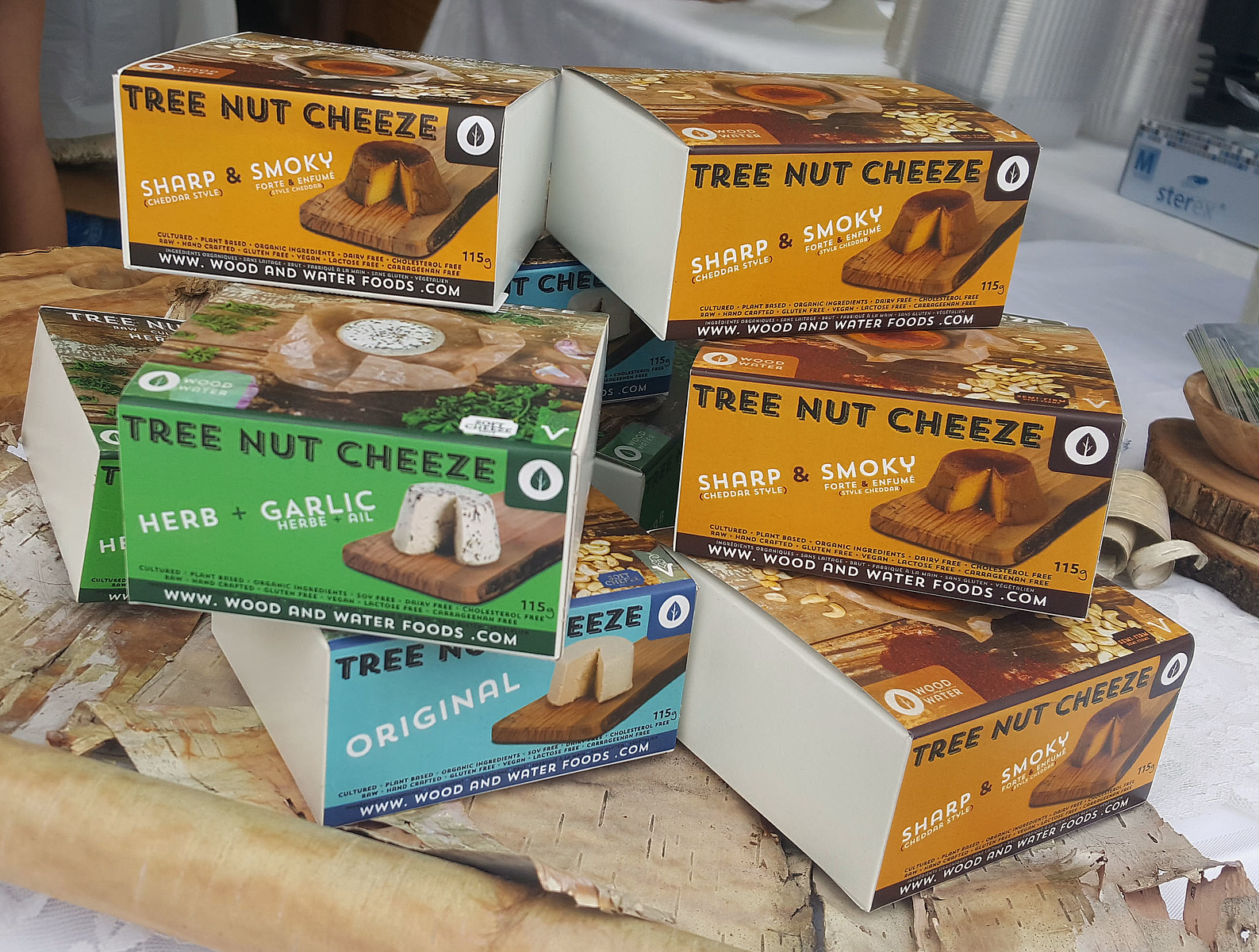 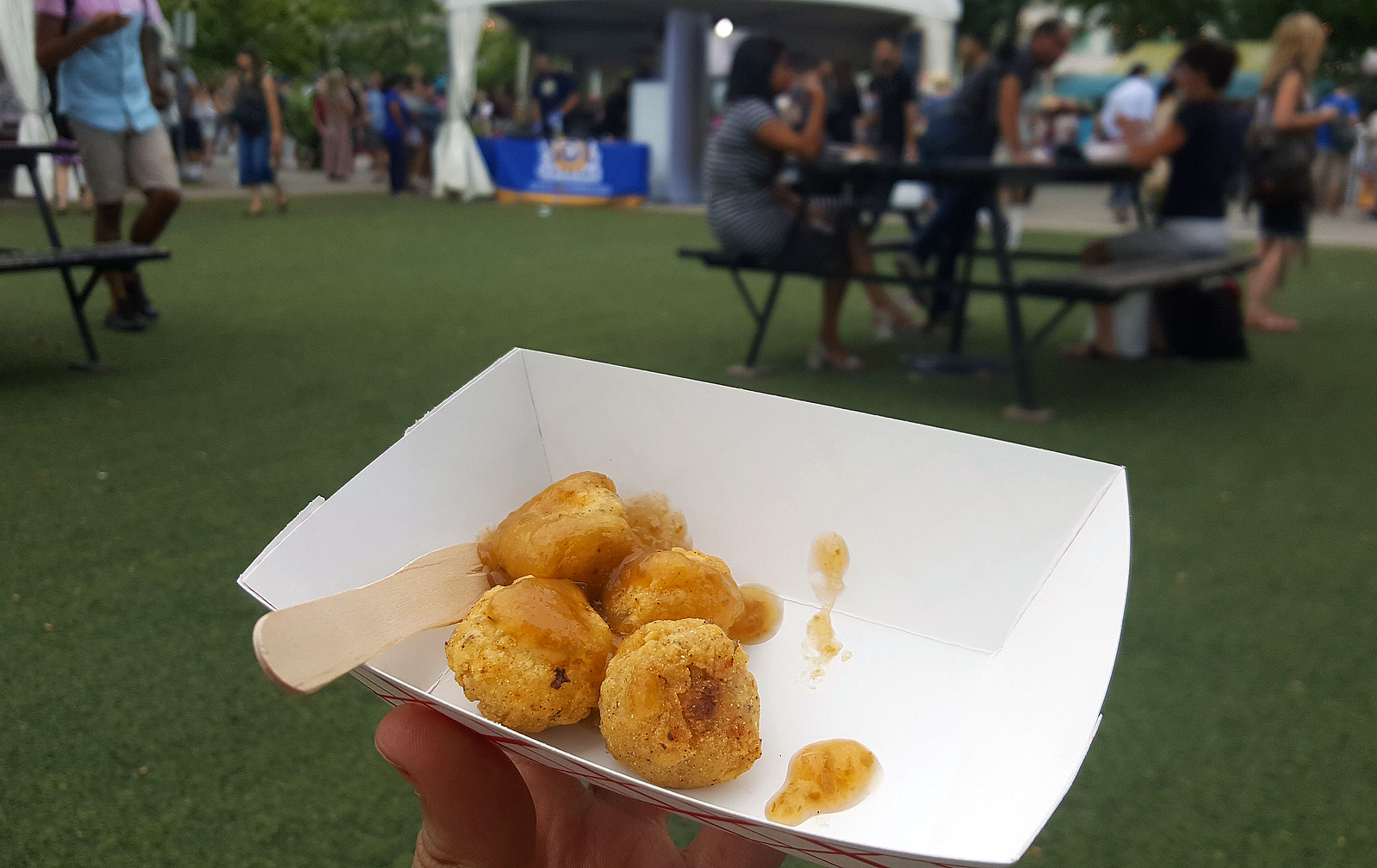 I’m a huge fan of Field Roast products. We buy their sausages on a regular occasion, and the Celebration Roast is one of my top favourite store-bought foods ever. (Bring this back to Canada, please!). Field Roast was debuting their Field Burger – it’s available in the States and soon to be for sale in Canada. One of the best store-bought veggie burgers I’ve tried. It tasted great with their Chao cheese slices.

Ah, coffee. My love. Two Bears Coffee is my favourite brand of cold brew coffee. It’s not bitter, it’s smooth, and there are two new flavours! Their coffee is now available in mint chocolate and maple pecan. I tried both and they’re delicious! You can find their coffee in select stores around the city and at Whole Foods Markets across Canada.

It’s guilt-free ice cream made from fair-trade, organic bananas! Nanashake has soft serve and creamy popsicles. I had to try one of the chocolate almond biscotti ones. It was very yummy. You could taste a hint of banana, and it blended nicely with the chocolate and almond. I’ve been meaning to visit their Toronto shop for some time now, so I’m glad I finally got the chance to try one of their frozen desserts.

By the time I got to the Cosmic Treats booth, I was totally stuffed. They were selling their incredible ice cream and baked goods, and it was difficult to restrain myself. However, I spotted the white chocolate peanut butter cups that I haven’t tried before. I picked up a couple packages so I could share with Justin. These chocolate bars taste just like their counterparts (there are ones that taste like Mars bars, Snickers bars, etc) and they’re all vegan. Yum!

Papabubble makes vegan-friendly candy, including hard candies, gummies, and cotton candy. Everything was so colourful! I brought home a tub of grape and cherry cotton candy, and it did not disappoint. Sugar rush!

There’s so much more to Veg Food Fest than the food. There were tables for local activist groups, like Toronto Pig Safe, Direct Action Everywhere, Animal Rights Kollective, Niagara Action for Animals, and more. There were tables representing local animal shelters, like Toronto Cat Rescue and Annex Cat Rescue (where we adopted Peanut!). It’s a great opportunity to learn more about these organizations, sign petitions, and become involved in the animal rights movement.

“If you don’t stand for something, you’ll fall for anything.”

There are many guest speakers, cooking demonstrations, yoga events, musical performances, and so much more at Veg Food Fest. You can read about my experiences as a volunteer at Veg Food Fest and visiting in previous years as written on this blog. I like to write about Toronto Veg Food Fest every year as it’s one of my favourite events in the city.

Even though over 60,000 people attend this free event, I still feel like not that many people know about it. It’s the largest vegetarian/vegan food festival in North America, and Toronto should be proud!

Have you ever visited Toronto Veg Food Fest? Do you have a favourite vegetarian food festival to share with me? Tell me all about it!