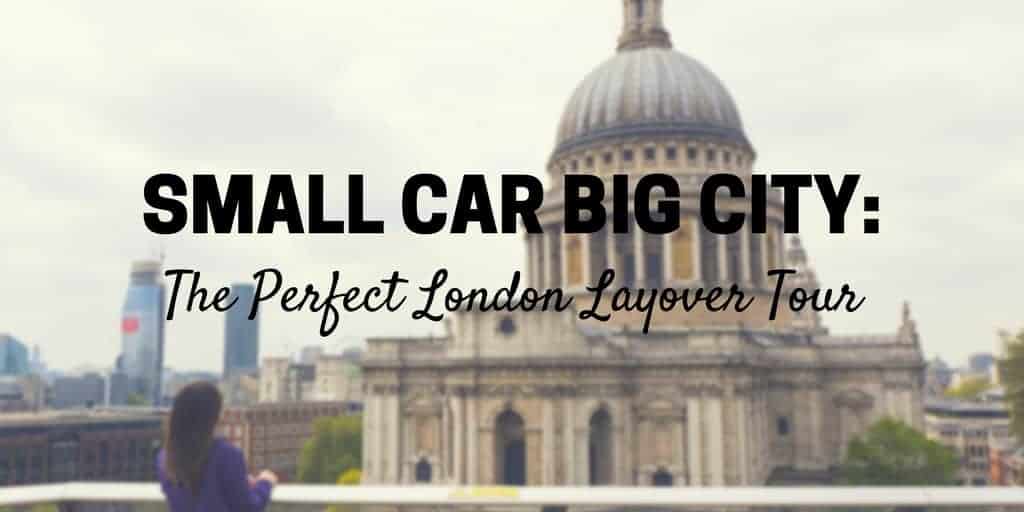 What should you do if you only have eight hours in London? Take the perfect London layover tour!

When my fellow blogging buddy, Lauren (yes, we’re both named Lauren!) and I traveled to Sri Lanka together, we had about eight hours to spend in London before continuing on our way to Colombo. It was my first time visiting London, and there was no way I was just sitting around Heathrow Airport for that amount of time. However, we were pretty tired from our overnight flight from Toronto, and we had another 12 hour flight to go. The two of us wanted an easy way to make the most of our time in the city.

Small Car Big City is the best way to see the most of London in a short amount of time, without having to plan anything. It is effortless. They take care of everything. With the help of a knowledgeable guide and driver, we got to see and learn so much about London.

And you get to tour around town in a Mini Cooper! How cool is that? Meet Daisy, our ride for the day. 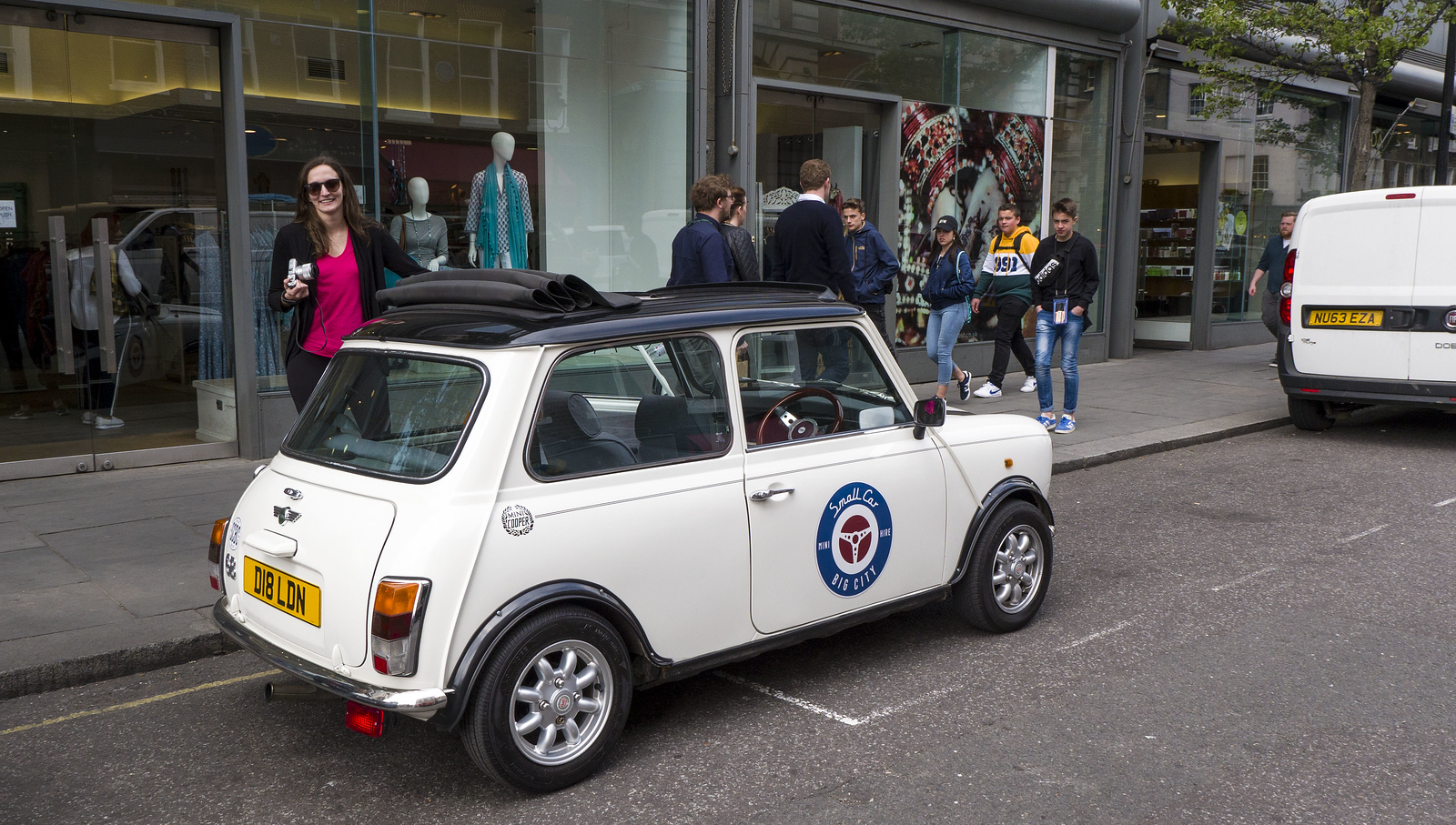 The cars are really cute for zipping around town. You can drive quickly down every narrow, cobblestone street imaginable.

Once we got through the immigration line (give yourself an extra hour for this as it can get busy), we made our way to the city from Heathrow Airport. There are a couple of ways to travel to London. First, you can take the Heathrow Express. This is the fastest way to get from Heathrow to London, taking only 15 minutes. This option is great if you’re tight on time and you don’t mind spending a little bit more money. For a one-way ticket, it can cost up to £25.

We took the Underground from Heathrow Airport to our destination (Green Park Station). It took about 45 minutes of travel time and cost around £6. Although it took a little longer, it was worth saving some money to do this.

Small Car Big City has an assortment of tours for every interest. They range from one hour to eight hours in length, depending on the amount of time you have and how much you want to see. There are also tours catered to fans of the Beatles, Harry Potter, and Banksy. You can take a tour of the best Christmas lights during the holiday season.

We booked the two hour tour called London’s Best Bits. It’s a tour through the eyes of a local, taking you to the best places around town. We got to see the iconic landmarks and the hidden gems, all in one tour.

The Mini Cooper seats three people, plus a driver. If you have more than three in your group, you can book multiple Minis and drivers and travel together in a convoy.

We met our friendly and knowledgeable driver, Samantha, at a local coffee shop and set out on our way. 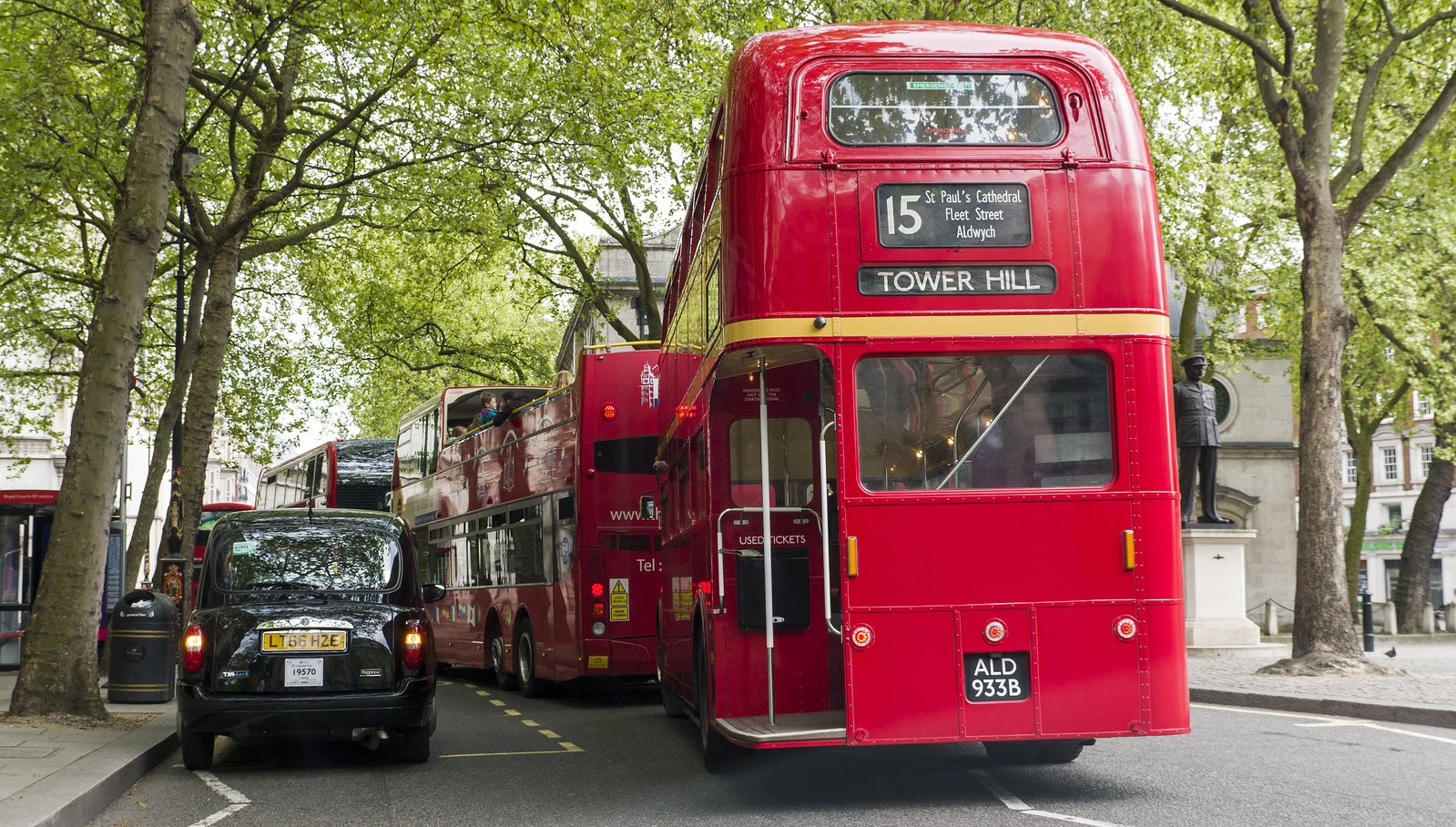 Touring with a Local

Our driver, Sam has worked with Small Car Big City for many years and has lived all over London. She was thrilled to show us her favorite places around town. It was awesome to travel with such an enthusiastic and insightful guide. Plus, she really knew how to drive that Mini Cooper! We whizzed around traffic and glided down the roads with ease. I couldn’t imagine navigating some of these streets in a larger vehicle. We rode around with the top down, stopping for pictures along the way.

Every time there was a point of interest or a story, we slowed down as Sam gave us a history lesson. These weren’t facts that you’d find in any ordinary guidebook or history book. We learned about neighborhoods and their quirky details. Sam showed us the oldest shop for fancy hats and the oldest wine merchant’s storefront. In London, you’re surrounded by a rich history no matter where you look. This city is full of stories and legends. I loved getting a small taste of this. It’s something I never would have grasped if I had walked around the city on my own. 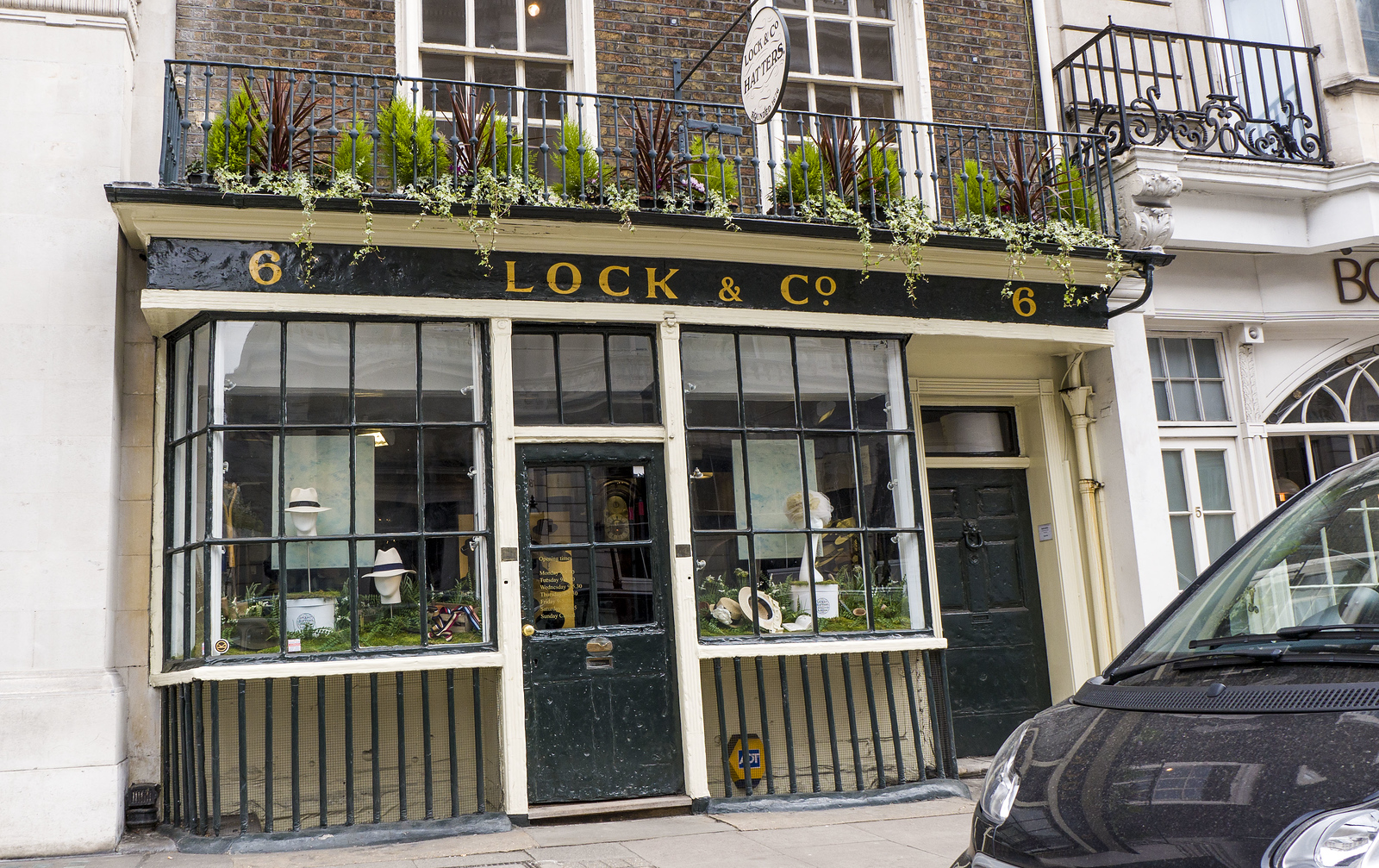 The oldest shop for fancy hats. How British.

The oldest wine merchant, established in the 17th century.

Even the malls have fascinating histories. We drove past the Burlington Arcade, which is a covered shopping mall. It opened in 1819 when Lord George Cavendish commissioned his architect to build a covered promenade of storefronts. People liked to throw garbage out of their windows, and he didn’t want any rubbish on his property. Nowadays, it’s still a shopping center that you can walk through, protected from the elements. 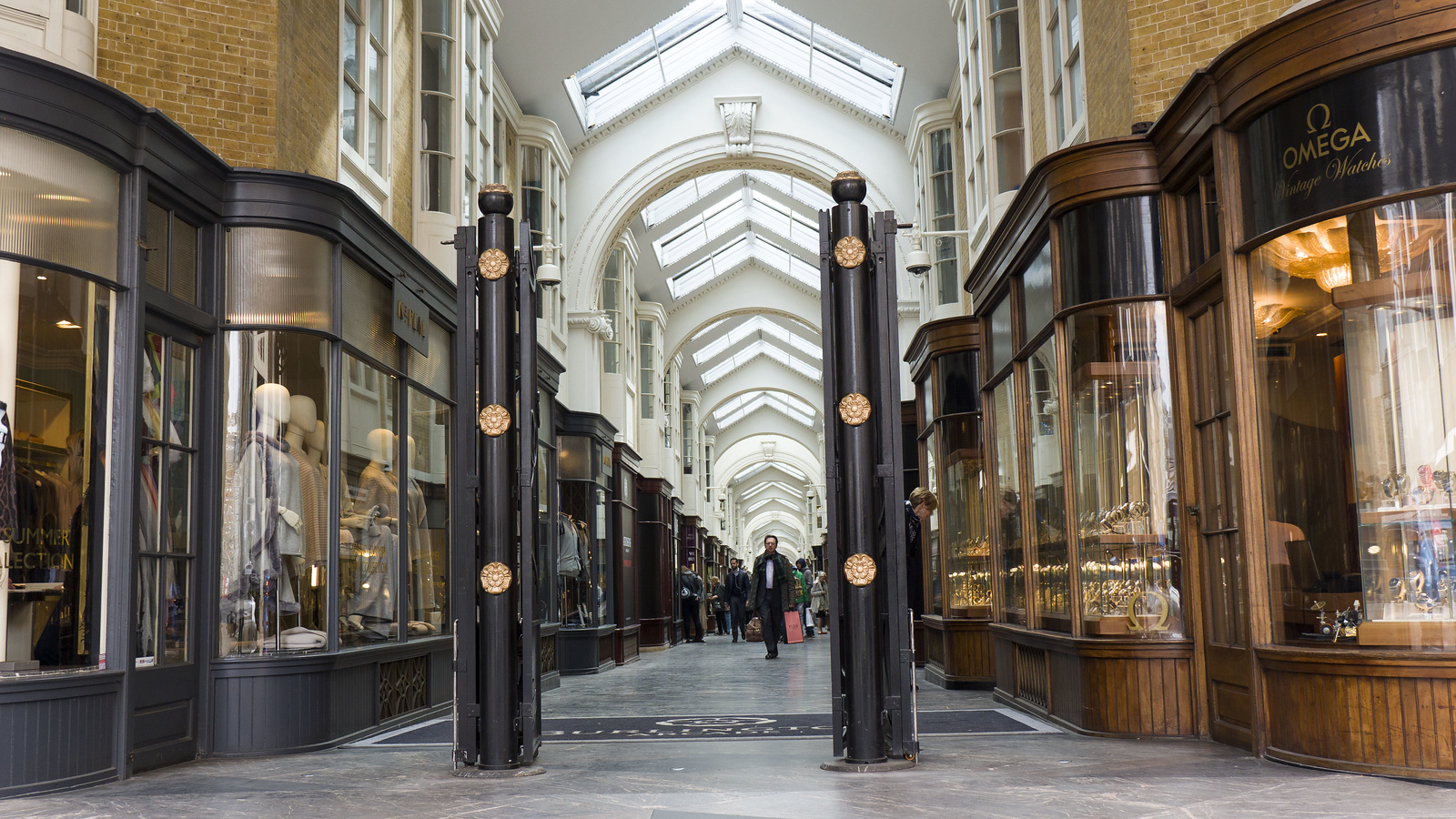 While driving around the city, we learned about many important buildings and monuments that I’d only ever seen in photos before. It was awesome to see the most iconic places with my own eyes. As some of these landmarks were all over town, it would be difficult to see them in such a short amount of time otherwise. And I wouldn’t attempt driving in London on my own, so I was happy to have an expert to navigate on my behalf. 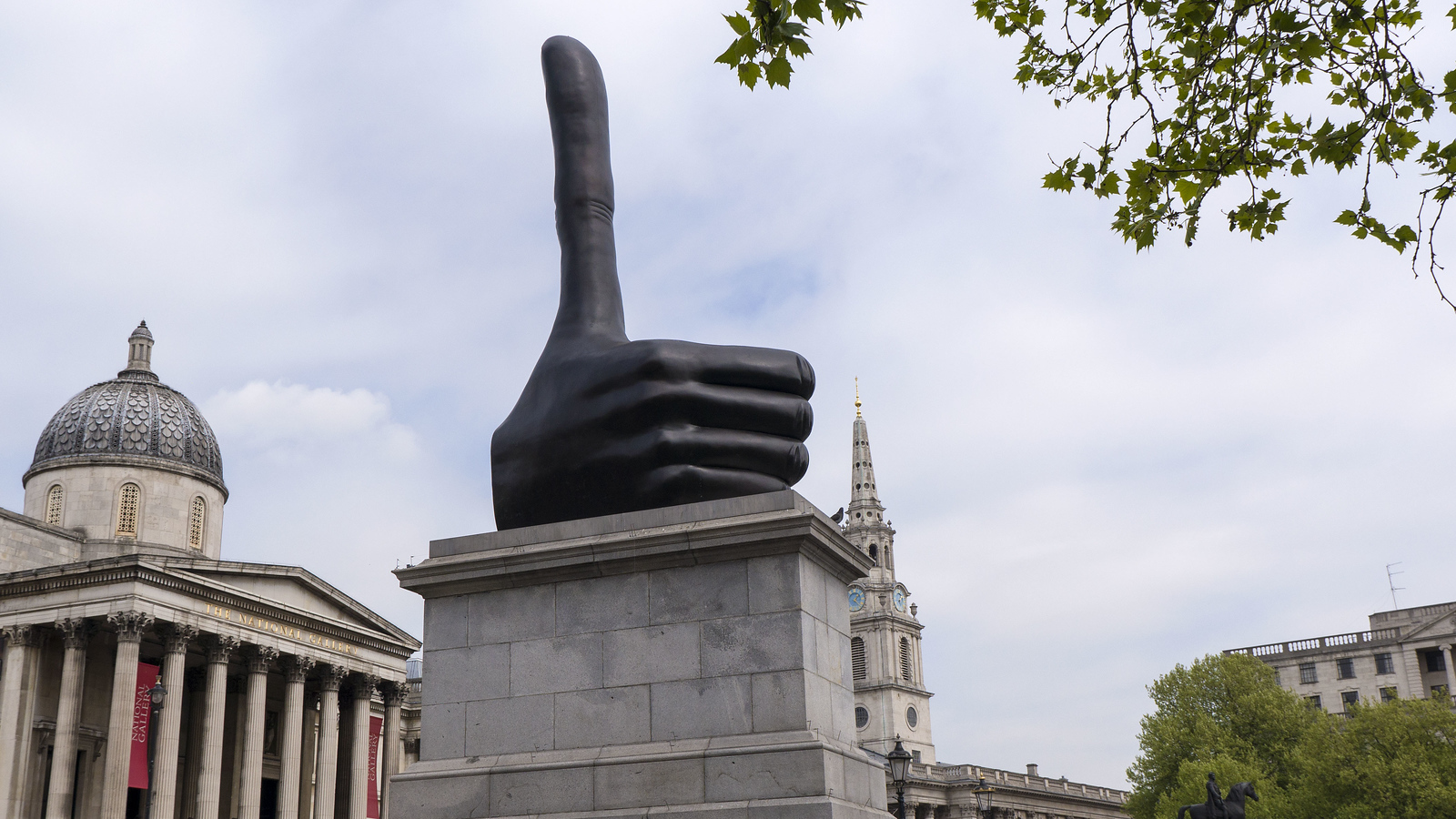 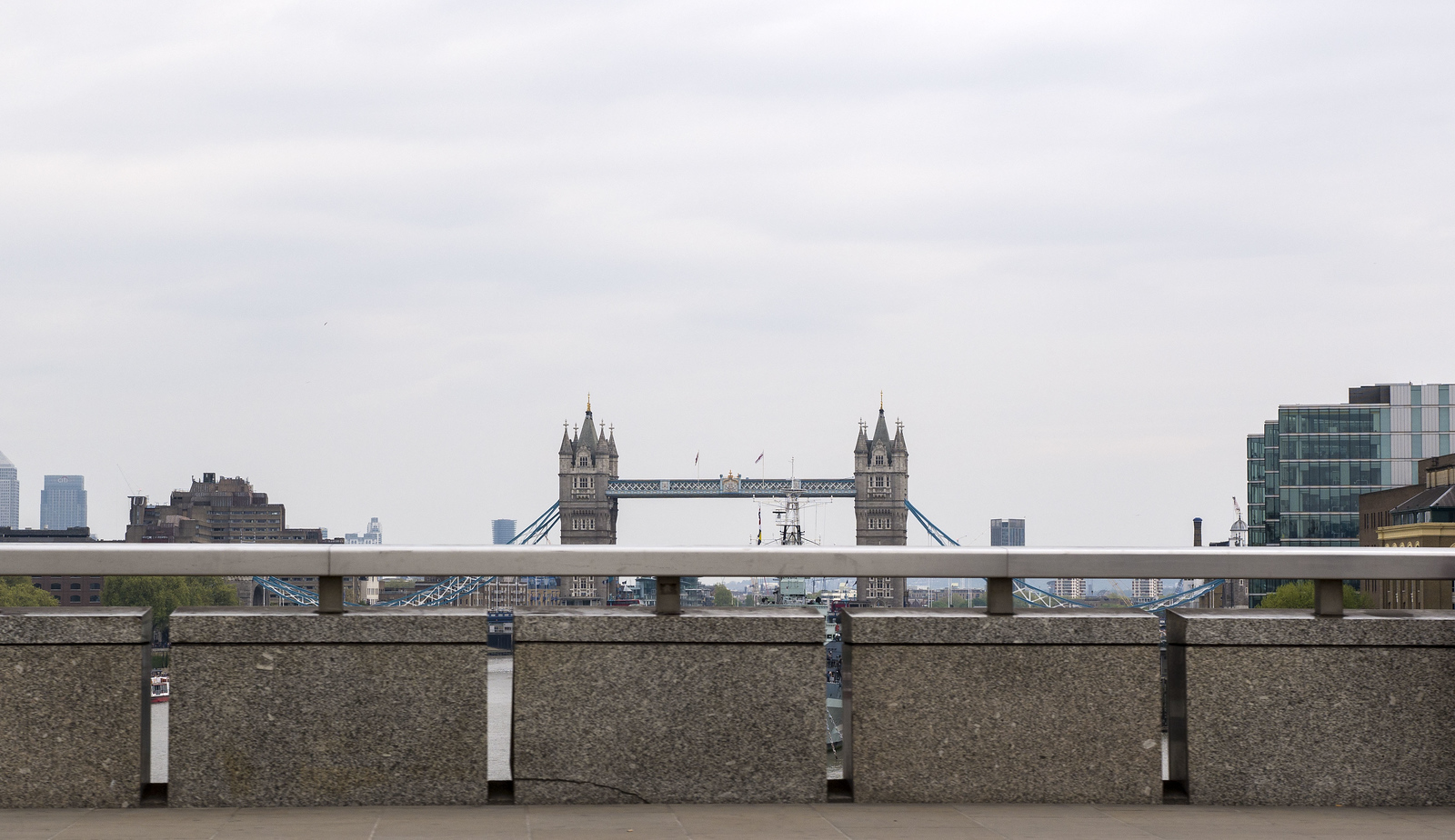 Sam drove our Mini Cooper, Daisy, down a road junction called Seven Dials. It’s an interesting neighborhood where seven streets all intersect. There is a column in the middle with sundials at the top, pointing at each of the streets. This neighborhood was one of London’s most notorious slums in the 19th century. Criminals found it very easy to get away from the police; there were so many easy getaways with several streets to choose from. At one point, every building facing the sundial column was home to a pub.

Today, it’s an unusual location with only one pub at the apex. Sam showed us an intriguing group of shops and restaurants down an alleyway. We got out of the car to explore a little bit. 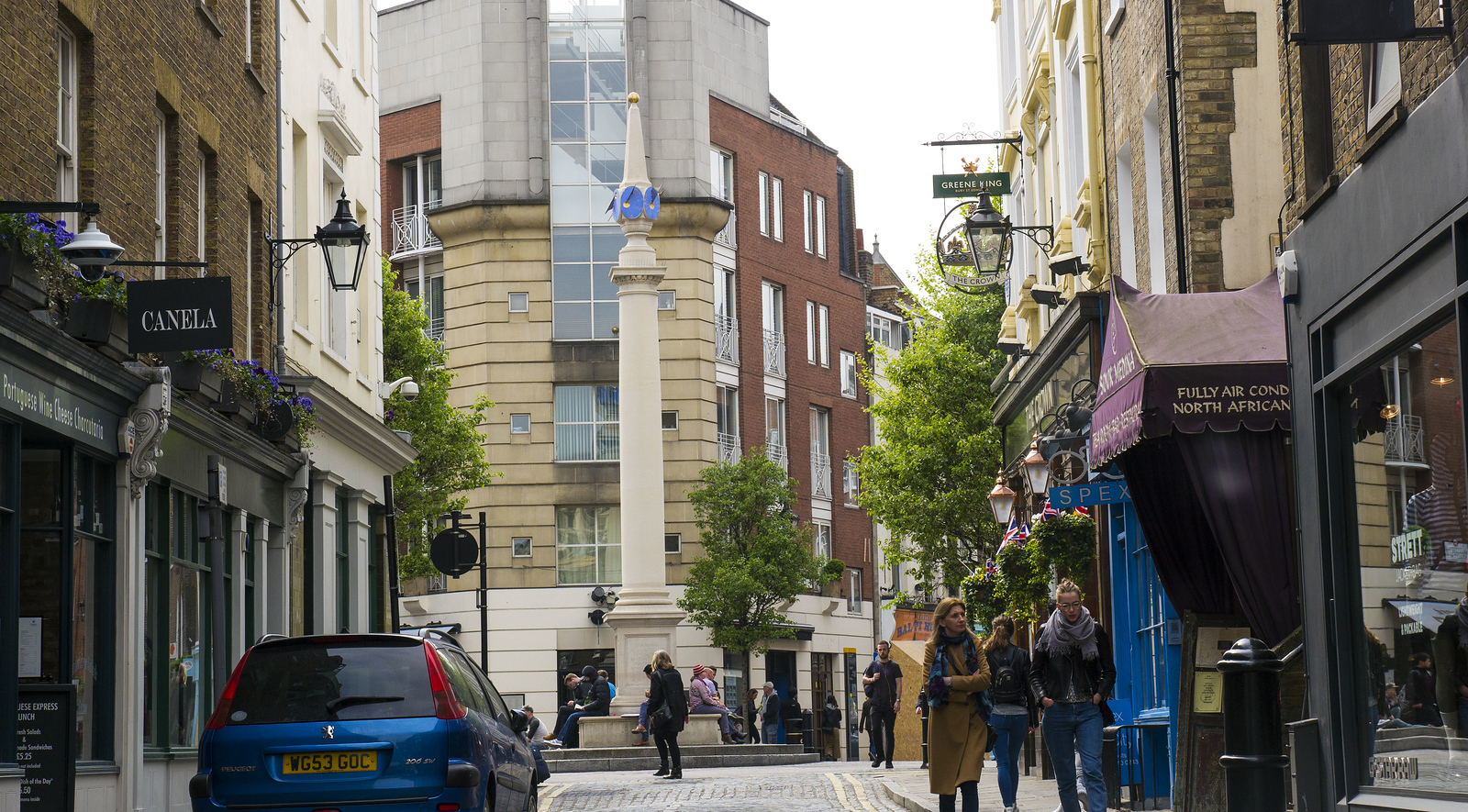 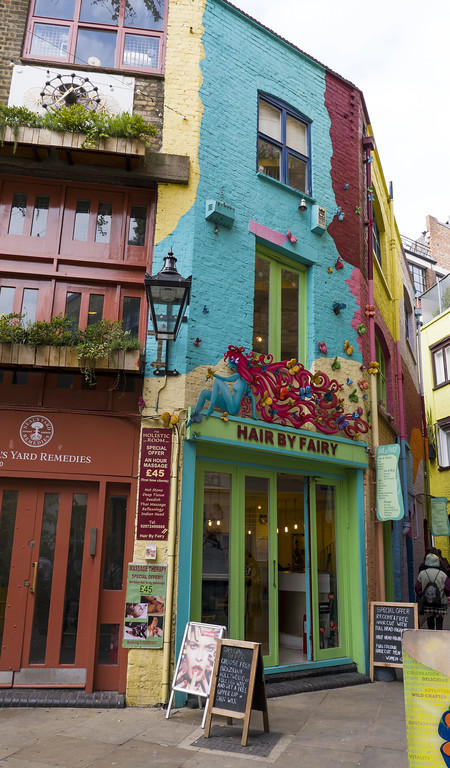 At first, we stopped at St. Paul’s Cathedral for a quick peak at the front of the church. Sam drove us around the side of it for a glimpse of the dome. With her insider knowledge, she asked us if we wanted to check out the best view of St. Paul’s Cathedral. Of course we did!

Sam dropped us off at a nearby shopping mall and told us to take the elevator up to the top floor. From up there, we could enjoy a fabulous view of the cathedral and the surrounding area. She said that she used to eat her lunch from up there every day, never growing tired of the view.

The scenery was stunning and she was right – this was the best place to check out the architecture of St. Paul’s Cathedral, without the crowds! 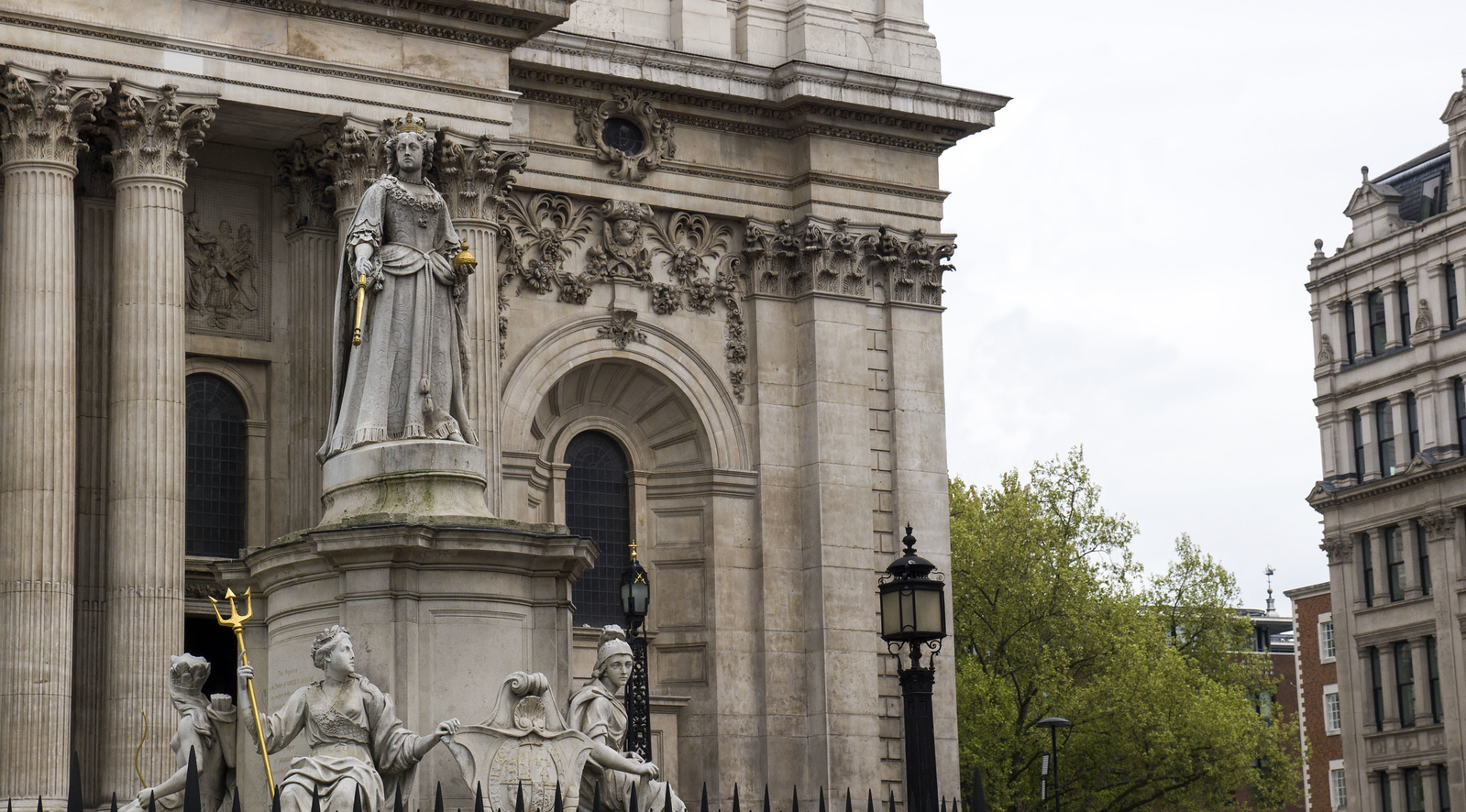 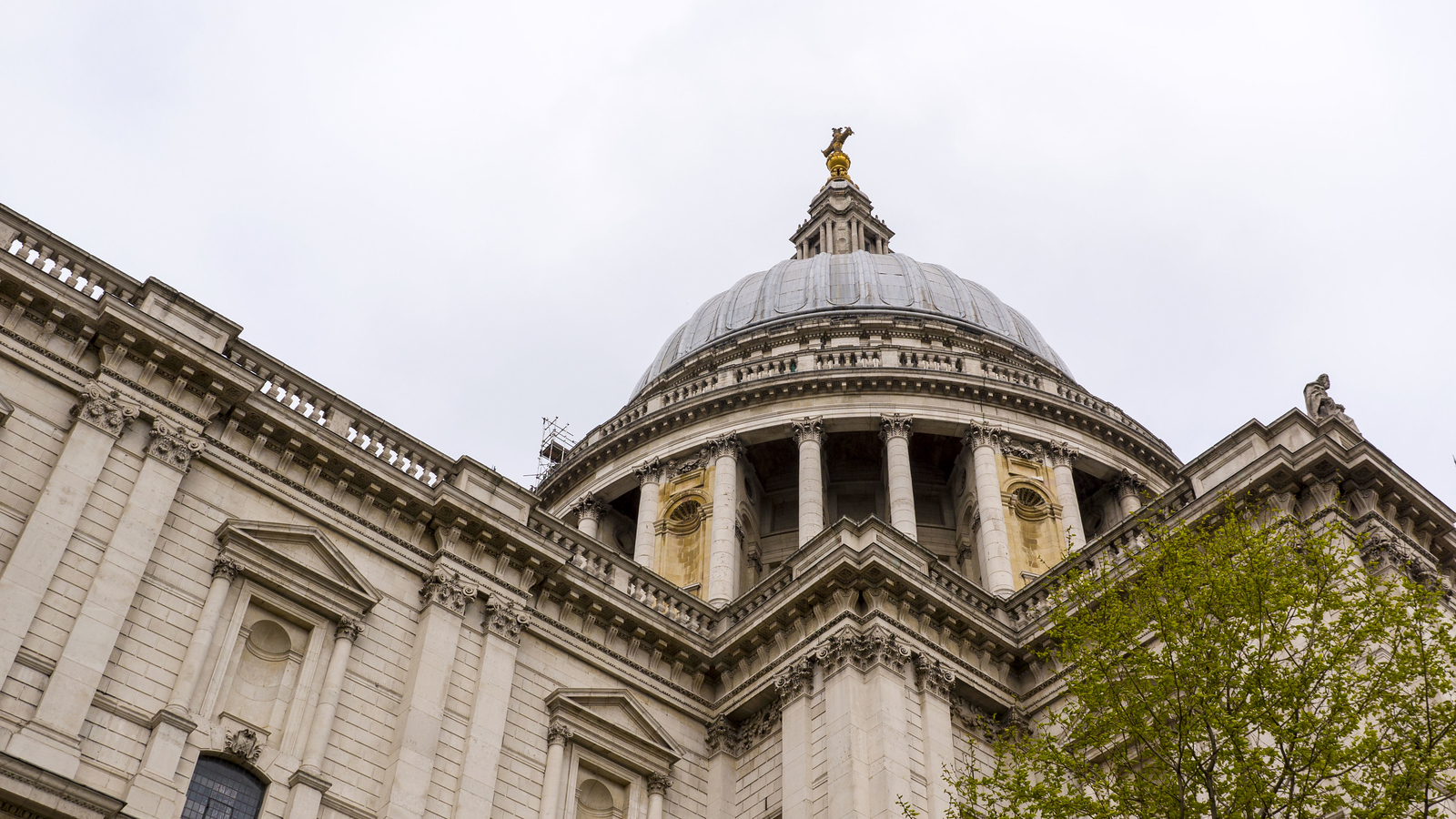 From the shopping mall’s elevator. 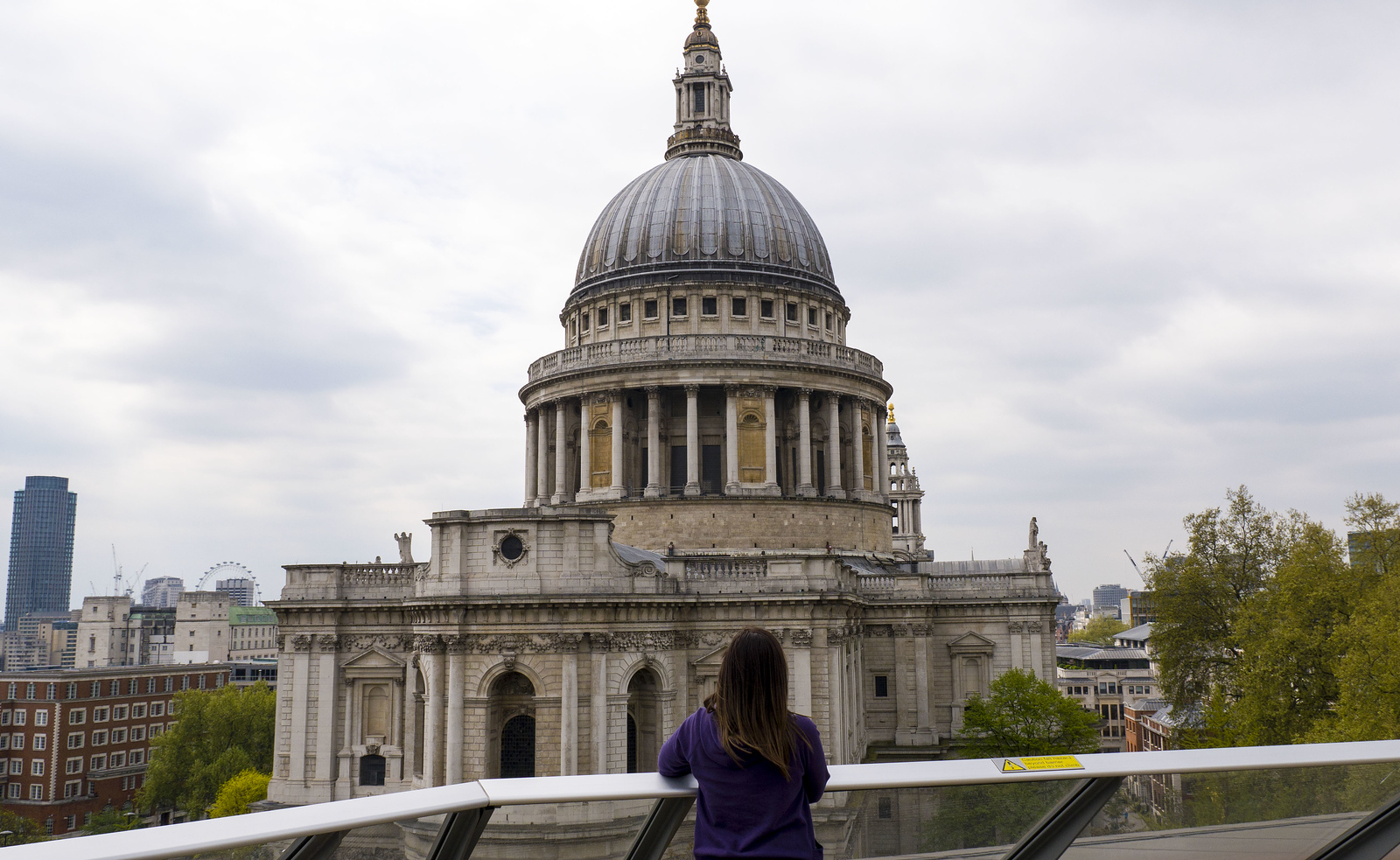 On our Small Car Big City tour, we visited three different markets in London. At the first two (Covent Garden and Leadenhall Market), we were given some history about the markets and details about the architecture. We explored our final market a little bit more, the Borough Market. While the first two markets were quite charming with several indoor shops, Borough Market reminded me of a traditional farmer’s market. There were stalls overflowing with fresh produce, stands selling jars of preserves, and stacks of freshly baked bread. 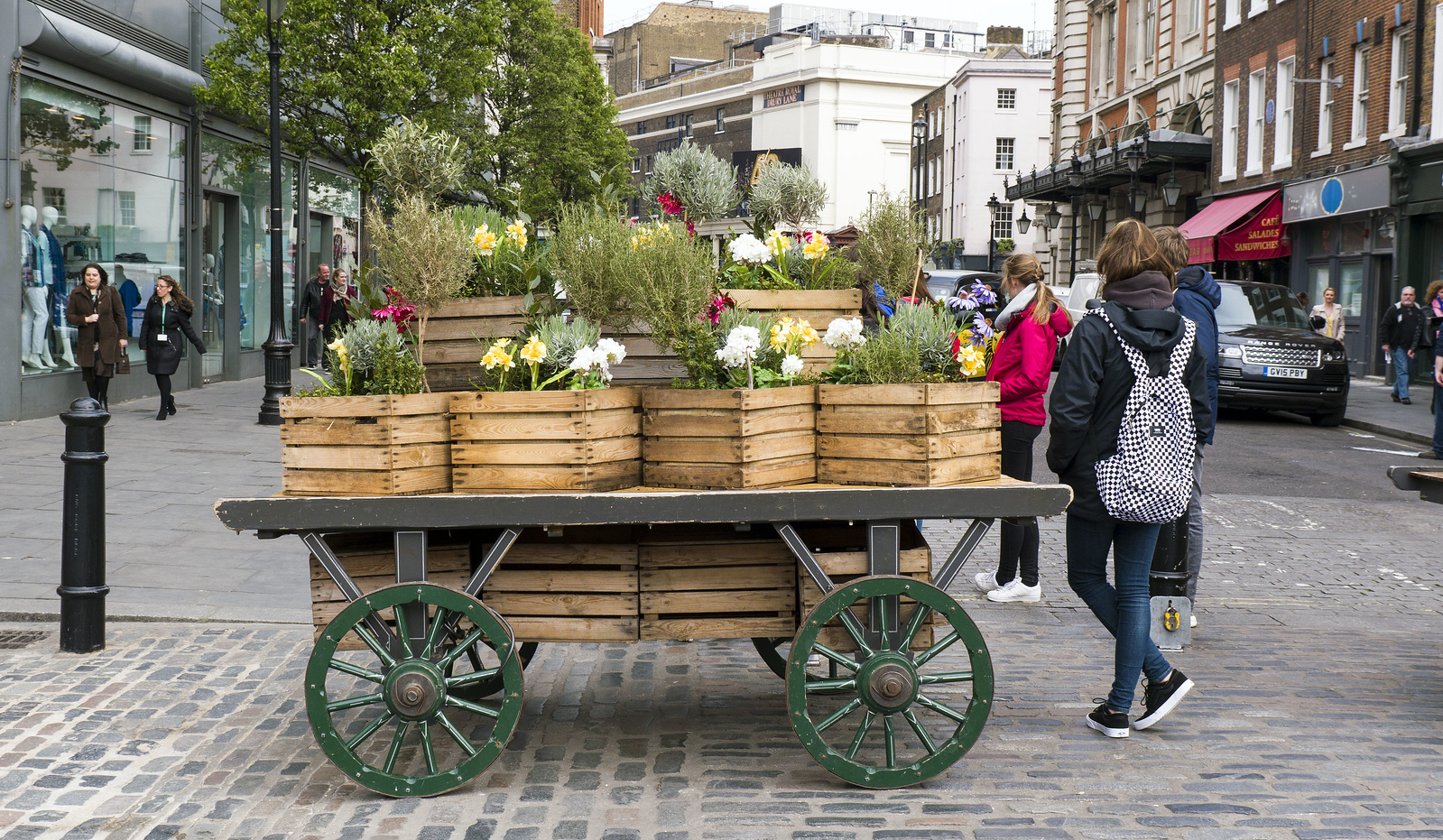 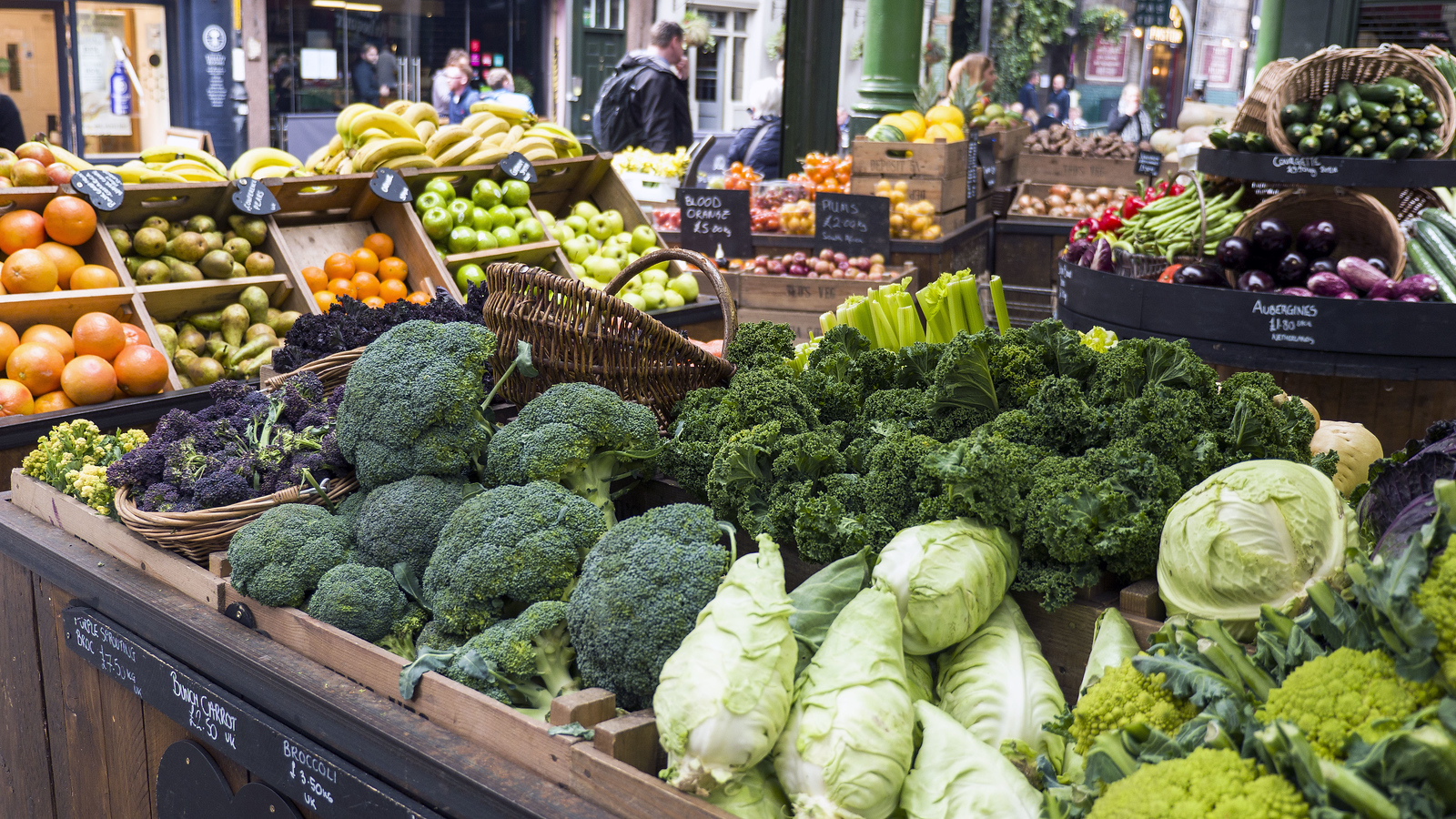 And saving the best for last, this was my favorite part of the tour.

The Leake Street Tunnel is an authorized space for graffiti artists to create their masterpieces. Back in May of 2008, renowned street artist, Banksy, held the first Cans Festival here (a play on the French film festival). Twenty-nine street artists from around the world were invited to paint sections of this tunnel. Since then, the tunnel was transformed into a pedestrian-only space. Artists visit regularly to create new works of art. The tunnel is constantly changing with new imagery and splashes of color.

With Daisy parked at one end of the tunnel, we were invited to explore and discover this impressive array of graffiti art from one side to the other. Some of the best pieces were found on the ceilings of the tunnel. 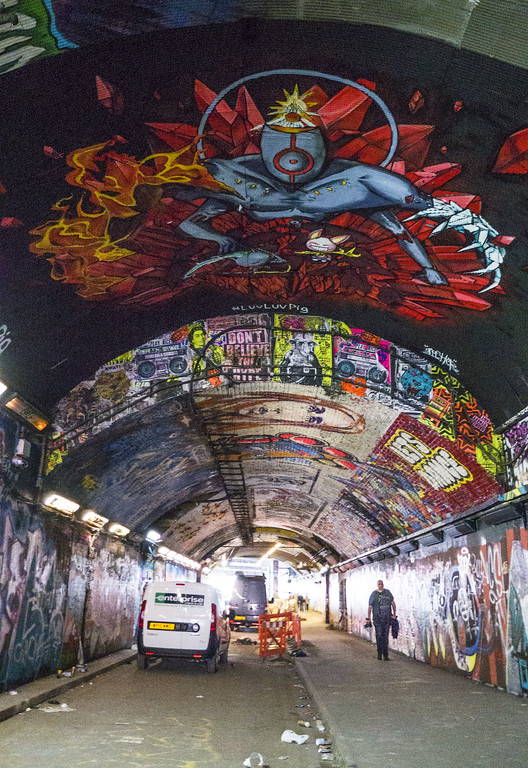 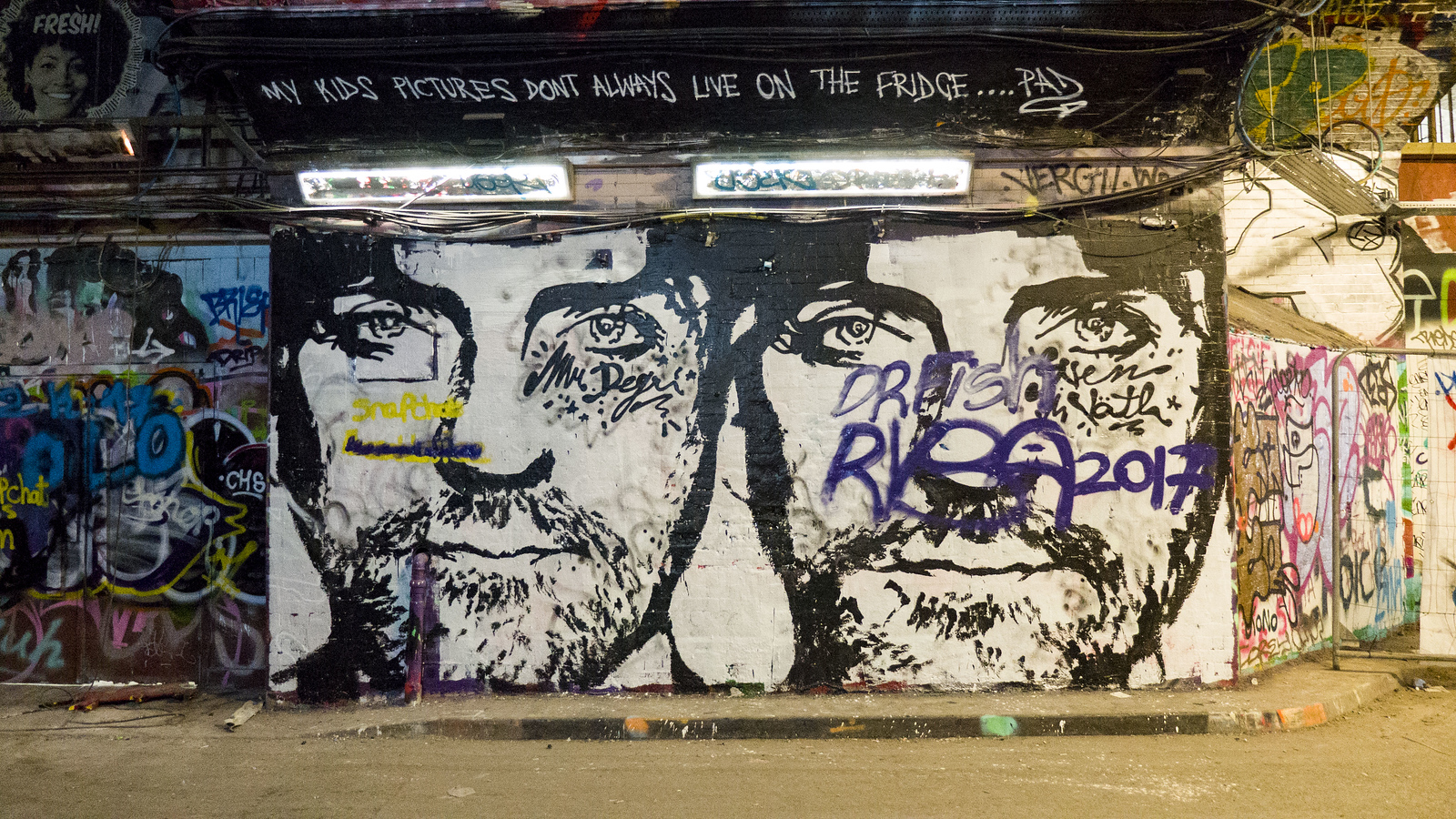 Can you believe that we saw all of those places in just a few hours? It was a great orientation to the city, especially for this first-timer. Even if you’ve traveled to London in the past, it’s a great way to see the city in a short amount of time. You don’t have to plan anything, and it’s a unique way to see many sights. I learned a lot and it’s definitely inspired me to travel back to London for more.

If you’ve got an upcoming stopover in the city, this is the ultimate London layover tour. Check out Small Car Big City for more details on how you can zip about in a Mini Cooper for an exciting day in London.

If you’re looking to see even more of London or perhaps you’re more of a Harry Potter fan, definitely check out this Harry Potter Studio Tour at Warner Bros. As we’re big fans of Harry Potter, we’ll be checking that one out for sure upon our return to the city. 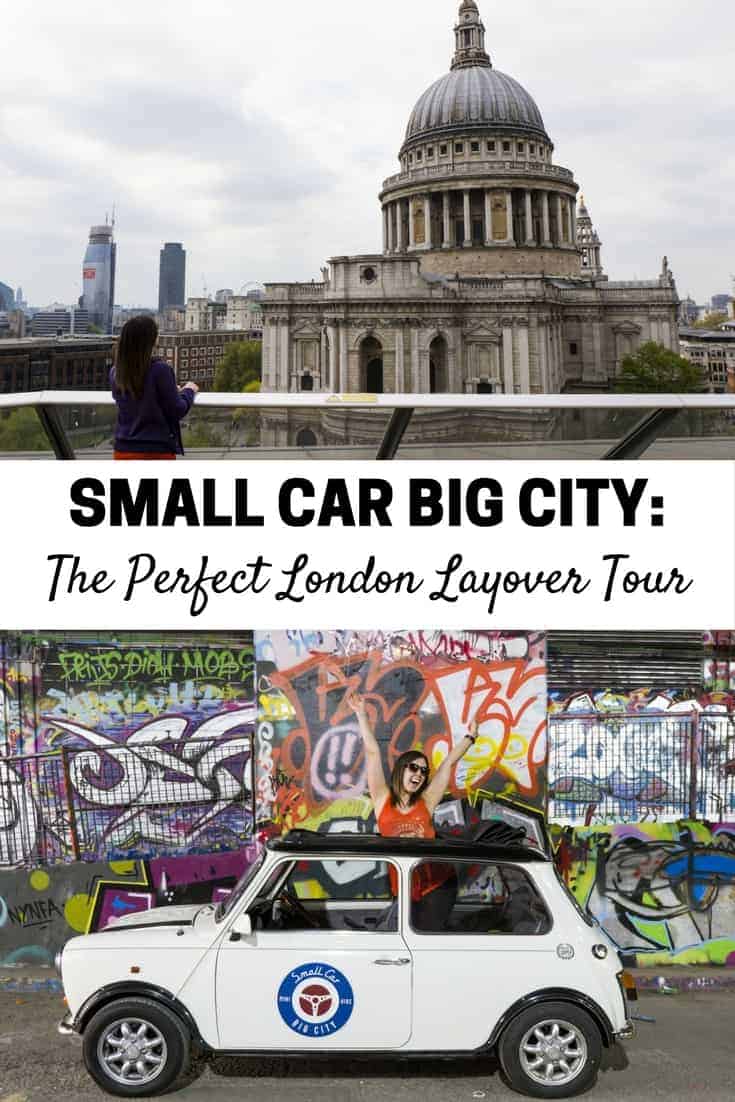 Disclaimer: I was invited to take this Small Car Big City tour while in London. My opinions, as always, are entirely my own. I highly recommend taking this tour when you’re in London, especially as a London layover tour!

Have you traveled to London before? What did you experience while you were there?

Such a great post <3 Hope that one day I could have a chance to visit London and others city in England. I love this country because I am a big fan of the Premier League and I want to go to all the big stadiums in London such as Wembley, Stamford Bridge, White Hart Lane, etc. I also have some England friends, they are very nice and friendly. I`m sure that my experience there will be one of the most memorable moments in my life. Thank you

Hey Lauren (and Justin!) - This is awesome! We just might arrange our next trip to take advantage of Small Car Big City. It does sound perfect! Thanks for tipping us off. Adding this to our Pinterest so we don't forget. :)

I wish I had seen this years ago when I had a long layover in London. Instead, I just spent the day walking around lost:)

Small article Big Blog ;-) Thanks again guys for sharing this wonderful London attractions photos. You really made my day.. took me back through the memories to the summer of 2008 when i first visit London. So lovely Keep up the great work! Happy travel