Shaw Club Hotel and Zee’s Grill – Niagara on the Lake 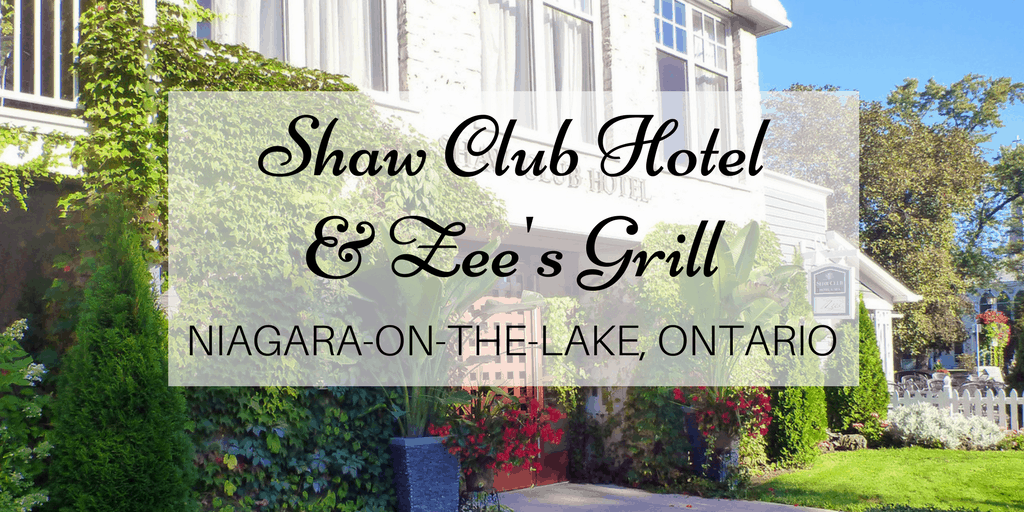 A romantic and charming stay after our wine tour in the Niagara region.

The Shaw Club is an upscale hotel right in the center of charming Niagara-on-the-Lake. It was the perfect place to stay following our wine tour with Niagara Vintage Wine Tours, as well as a romantic place to celebrate Justin’s birthday.

The main foyer of the hotel is bright and majestic, and there are many free amenities for the guests. For instance, there’s complimentary coffee all day and night, there are board games and DVDs that guests can borrow (DVD players in the rooms), and you can even borrow a pet during your stay. Yes, the hotel had small bowls of fish that you could have in your room during your stay, and there’s the opportunity to purchase your new pet fish to bring him home with you.

Our room at the Shaw Club Hotel was in a separate building just behind the main building. I had read reviews complaining about this building, but fear not! Unless you have a mobility issue, we found absolutely no difficulties with staying here. I highly recommend staying in the annexed building. Our room was newly renovated and even had a whirlpool tub for about half the price of a regular room. Score!

Now, you might be wondering why Justin is lying on the ground in this picture.

A member of the hotel’s front staff explained that all of the room numbers are written on the door to the room, as well as the floor. She joked that this was for the people who had to crawl back to their room after drinking too much wine! So, we took this funny photo of Justin “passed out” in front of our room.

Our room was thoughtfully planned and decorated. There was even a rubber ducky by the whirlpool tub. The shower in the bathroom was huge. There was even a little book in the room where we could write about our stay, and read what others had to say.

We had one slight problem with our room that was a rather strange incident. This was the first time this has ever happened to me, and thankfully it didn’t happen in the middle of the night.

I was sitting on my side of the bed after dinner when we heard a creaking sound…and the bed broke! I got up to look and a metal piece under the bed had snapped and broken off.

We went downstairs to the front desk where the girl apologized profusely and came upstairs with us to investigate. We had all never seen anything like it, especially since those rooms were newly renovated. Thankfully, the room next door was unoccupied, so we were able to move over there. She even gave us both rooms to use if we wanted to, but we really didn’t see the point in using the first one any longer.

It was a bit of an inconvenience, but one of those freak accidents that likely couldn’t have been prevented. We did kind of like our first room better (a bigger shower!) but otherwise, the rooms were identical. When we checked out of the hotel the next day, they actually gave us a $45 credit back for the inconvenience, which was a really nice gesture considering we didn’t even ask for any sort of refund.

We highly recommend staying at the Shaw Club Hotel – the rooms were really nice and comfortable, and the staff was highly attentive and friendly.

After we got back from the wine tour, we were a bit tipsy and really hungry since we didn’t eat much at all (which could be a reason why we were even more tipsy from the wine!). Justin and I ventured out into town in search of food and whatever else we might stumble upon.

LUNCH AT TASTE THE HEALTHY OPTION

We didn’t want to eat anything too heavy as we would be going out for dinner within a couple of hours, but we were pretty starving. Right on the main street, we found a place called Taste the Healthy Option (sounds right up our alley, doesn’t it?!), which is a soup and sandwich shop.

We both were able to customize our sandwiches to make them vegan with loads of veggies. At first, we sat outside for the fresh air and people-watching, but it got a little bit chilly so we moved indoors. The sandwiches were perfect as a quick bite, and I also drank a coffee to wake me up a little, too! 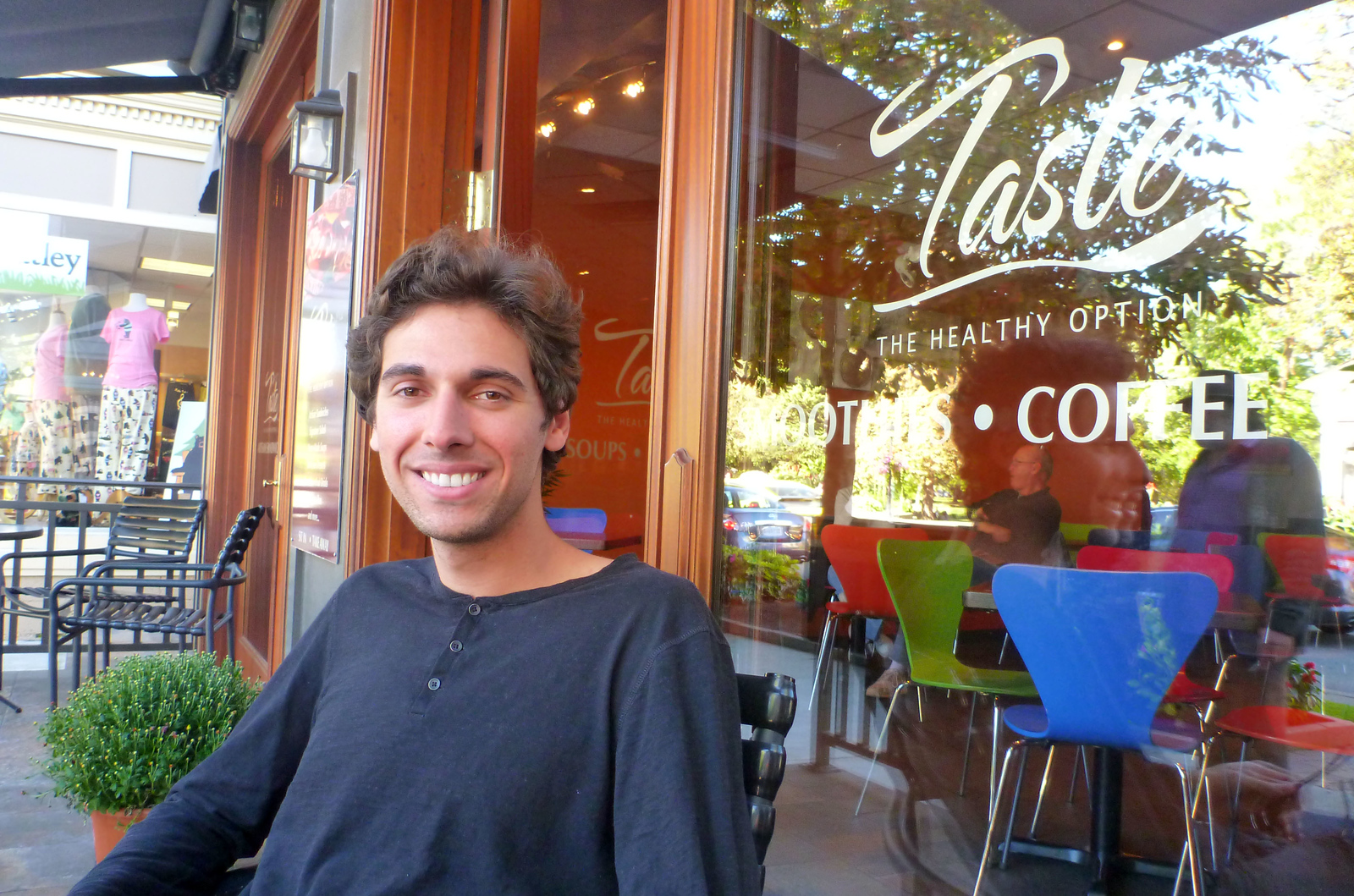 UPDATE APRIL 16/18: Please note that these vegan entrees are no longer available at Zee’s Grill. Thankfully, there is still one vegan option on the menu – the vegetarian/vegan risotto.

For dinner, we had reservations at Zee’s Grill, which was attached to the Shaw Club Hotel. I chose this restaurant because there were three vegan entrees on the menu, which was quite rare for Niagara-on-the-Lake where I couldn’t find vegan options anywhere else.

Therefore, we ended up staying at the Shaw Club Hotel because it was attached to this particular restaurant. The restaurant had a wonderful ambiance and we were seated in an enclosed, heated patio. We both ordered drinks to start – Justin got a beer and I got a peach cocktail.

Our waiter was super courteous, attentive and polite. We placed our entree orders, not necessarily telling him that we both followed a vegan diet, but we did order two of the vegan entrees.

The chef sent a complimentary amuse-bouche to each of the tables, which happened to be some sort of small salmon dish. When our main waiter discovered this, he quickly came over to our table and asked us, “Are you both vegetarian?” and apologized profusely. We were both totally fine and just explained that we weren’t going to eat it, and it was all good.

However, he went above and beyond by asking the chef to prepare a vegan amuse-bouche for us. Our server brought out two small chilled tomato soups with basil oil that were delicious. That was such a nice gesture to go to the trouble of making this just for us.

For our appetizer, we both ordered these little fried potato cakes that came with a sweet potato sauce, topped with a salad that included some pickled veggies. The potatoes were delicious little bites and all of the other ingredients complimented them perfectly.

My goodness. Both of these dishes were amazing. They were rich with an explosion of flavors, and the portions were huge. Justin said it was one of his favorite meals in a restaurant, ever. We will definitely be back if we find ourselves in the area. 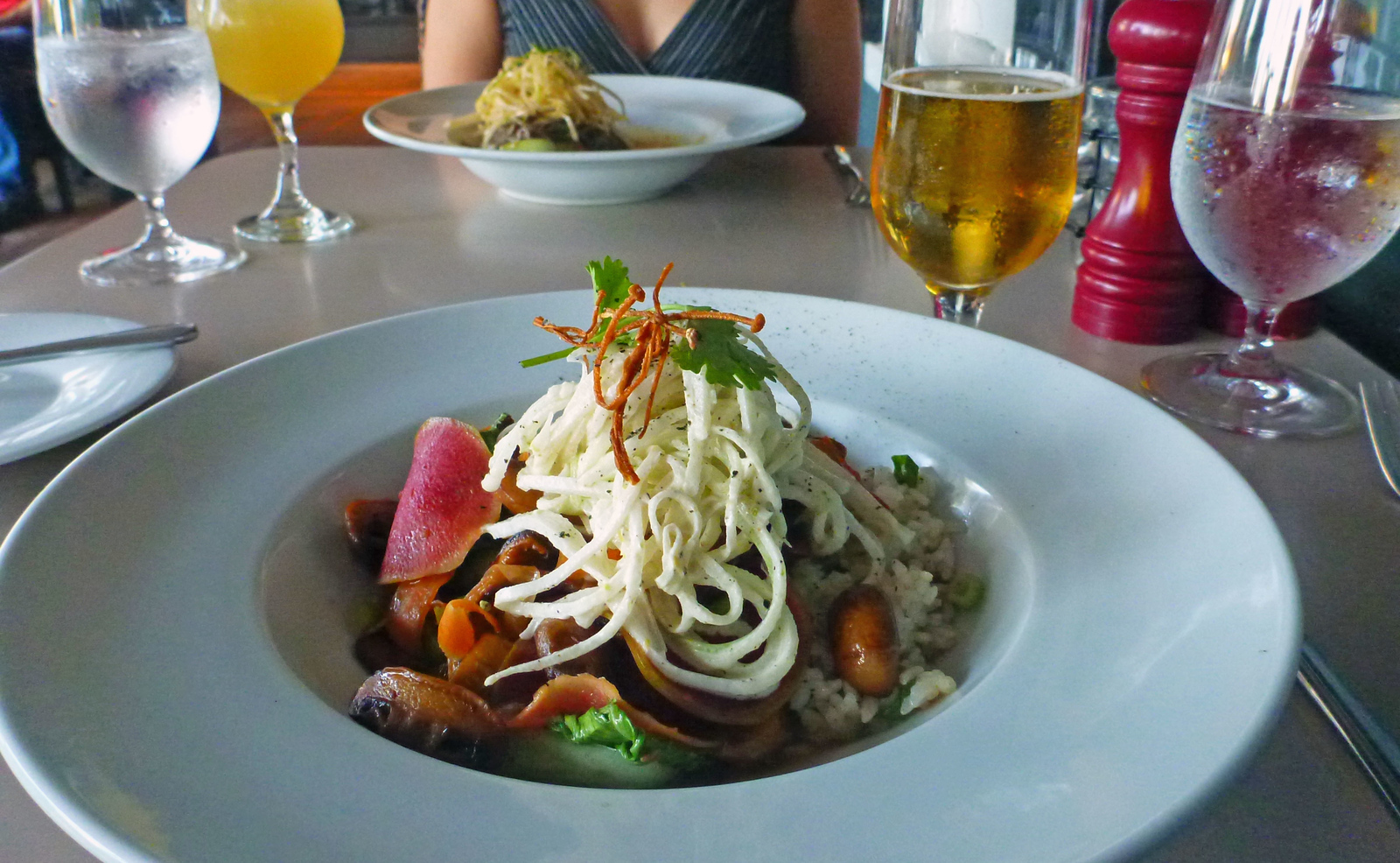 All in all, we thoroughly enjoyed our stay at the Shaw Club Hotel, as well as our meal at Zee’s Grill. Combined with a wine tour in the Niagara region, this was the perfect getaway in southern Ontario.

Looking for more fun things to do in Niagara? Check out 4 Incredible Ways to Experience Niagara Falls, our visit to Niagara Vegfest, and why you should visit Niagara Falls in the winter.

Book your stay at the Shaw Club Hotel!

Check out all of our photos from our stay in Niagara-on-the-Lake in our travel photo album. You can purchase prints, gifts and more made from any of our photos. View our entire travel photography site and shop. 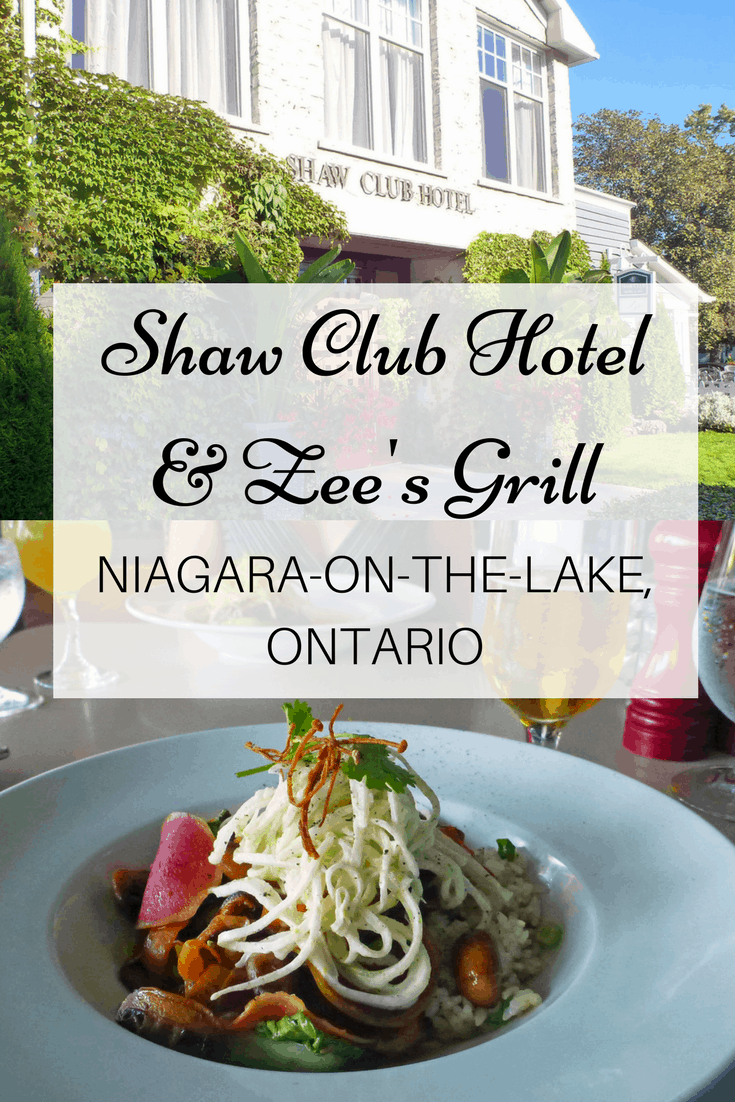 Have you ever stayed in Niagara-on-the-Lake?

Niagara on the Lake has always been a favorite of mine. I was just there last Saturday with a friend for shopping and then lunch at the Angel Inn. I'm not to far away in Burlington and I used to live in NOTL but on the outskirts. I'll have to look into this hotel. I'm hoping to get down for the annual Christmas candlelight walk and it would be easier to stay overnight. Depends on finances. I could always get to St. Catharines and stay with friends. I haven't been to Zees but what they did for you being vegan was fantastic. First rate customer service.

Oooh, Christmas candlelight walk! I haven't heard of that before - I'll have to look into it because it sounds awesome! We love staying in NOTL - it's special all year round! We've stayed at Piller and Post before too and that was awesome. :)

The hotel room is pretty cool, but what calls most my attention are the food pictures, everything looks so yummy, if I would be there I think could have weight problems after eating all those good and delicious food creations.

It looks like you had great time there, what most I like is all those food pictures, everything looks so delicious, I'm getting hungry lol :))

If you are going for ffinest contents like myself, just pay a visit this site everyday as itt provides quality contents, thanks

I lived in Niagara-on-the-Lake many years ago and there have been a lot of changes- definitely more good restaurants. I used to have a flower shop on the main drag and I can't say I miss the days when tourists with glazed eyes walked in and walked out , seeing nothing. It's also a beautiful area for biking plus it's easy. Looks like you had a great meal and the Shaw Club appears to be a fine choice of hotel.

Wow, that is so cool that you had a flower shop there! But I definitely know what you mean, I'm sure you had your share of good customers and bad ones. I would love to go biking there someday to explore the region a different way! ~Lauren