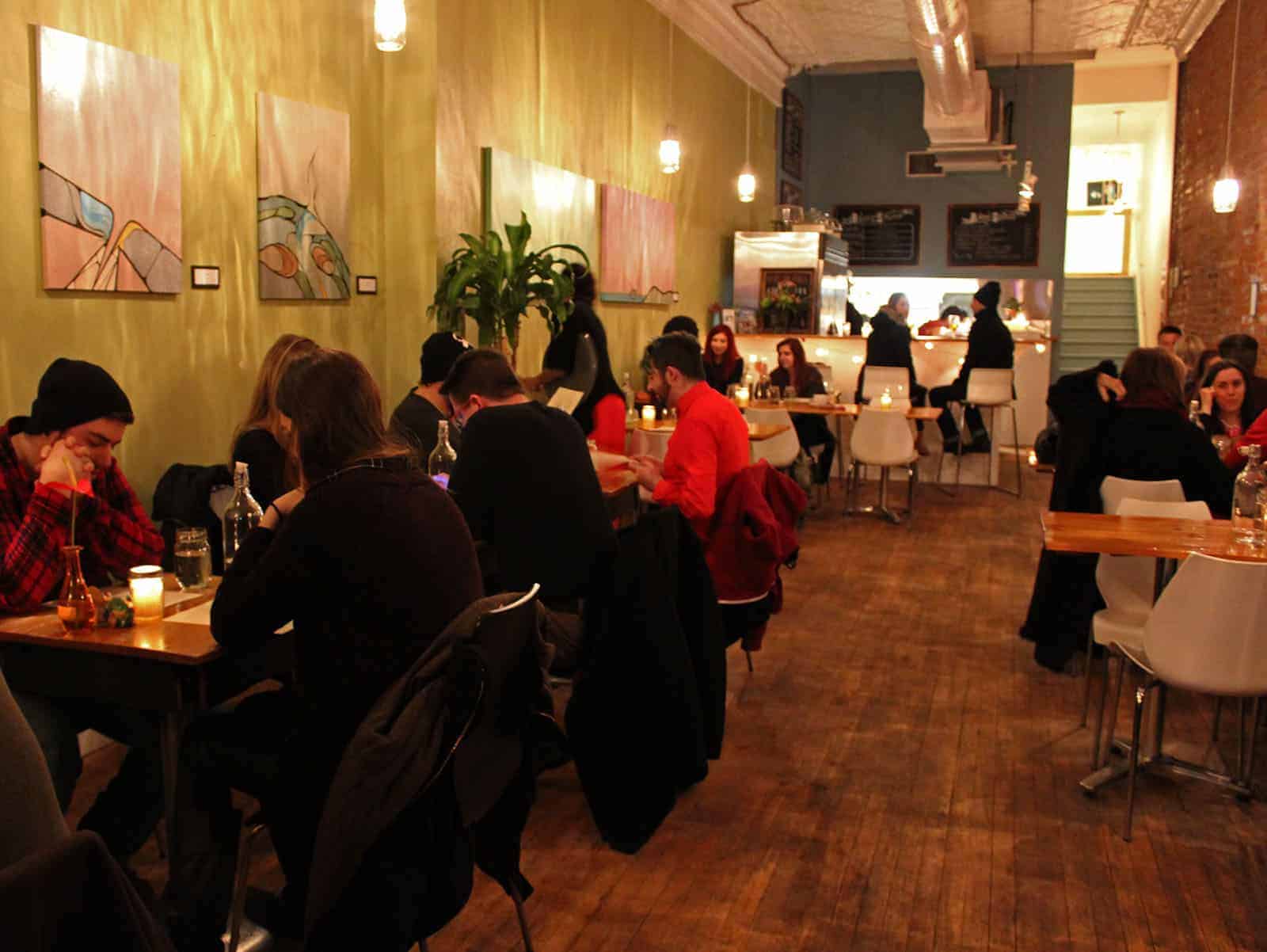 As part of our romantic Valentine’s Day together, we made the drive from the Pillar and Post hotel in Niagara-on-the-Lake to Rise Above Vegan Restaurant in St. Catharines, Ontario. It was very lightly snowing outside and as luck would have it, a snow plow drove right in front of us nearly the moment we left town. For almost the whole way, we were stuck behind this snow plow who was driving in the middle of the road ensuring that we couldn’t pass! Despite a mildly annoying drive, we made it right on time for our seven o’clock reservation. Any tension that had built up from that drive immediately melted away when I set foot into the restaurant. The lights were dimmed, the candles were lit, and there were flowers decorating each table. Typically, Rise Above offers their regular menu; for Valentine’s Day, they were featuring a special three-course prix fixe menu. Also, reservations were required for this special event and they were fully booked for the occasion. 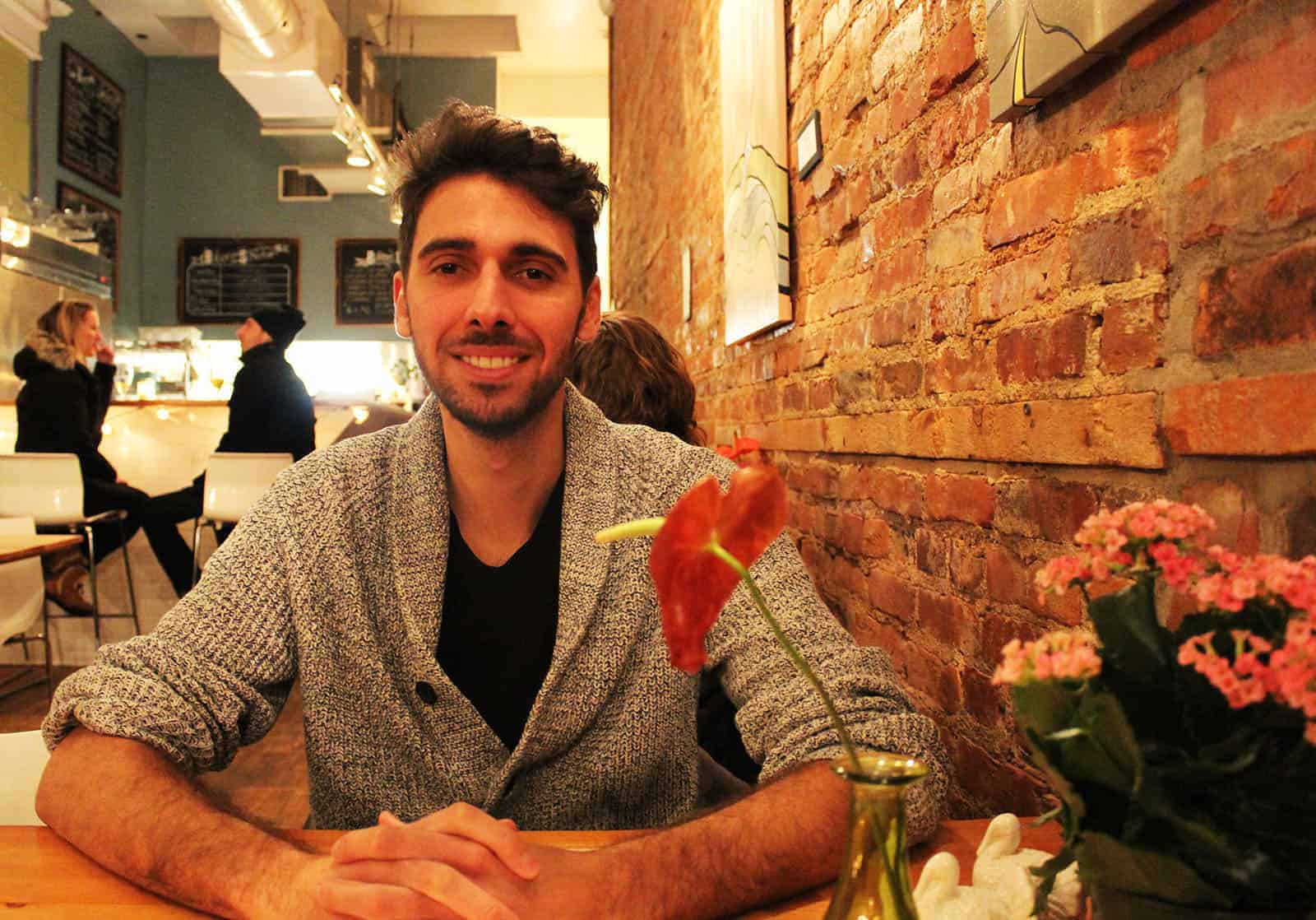 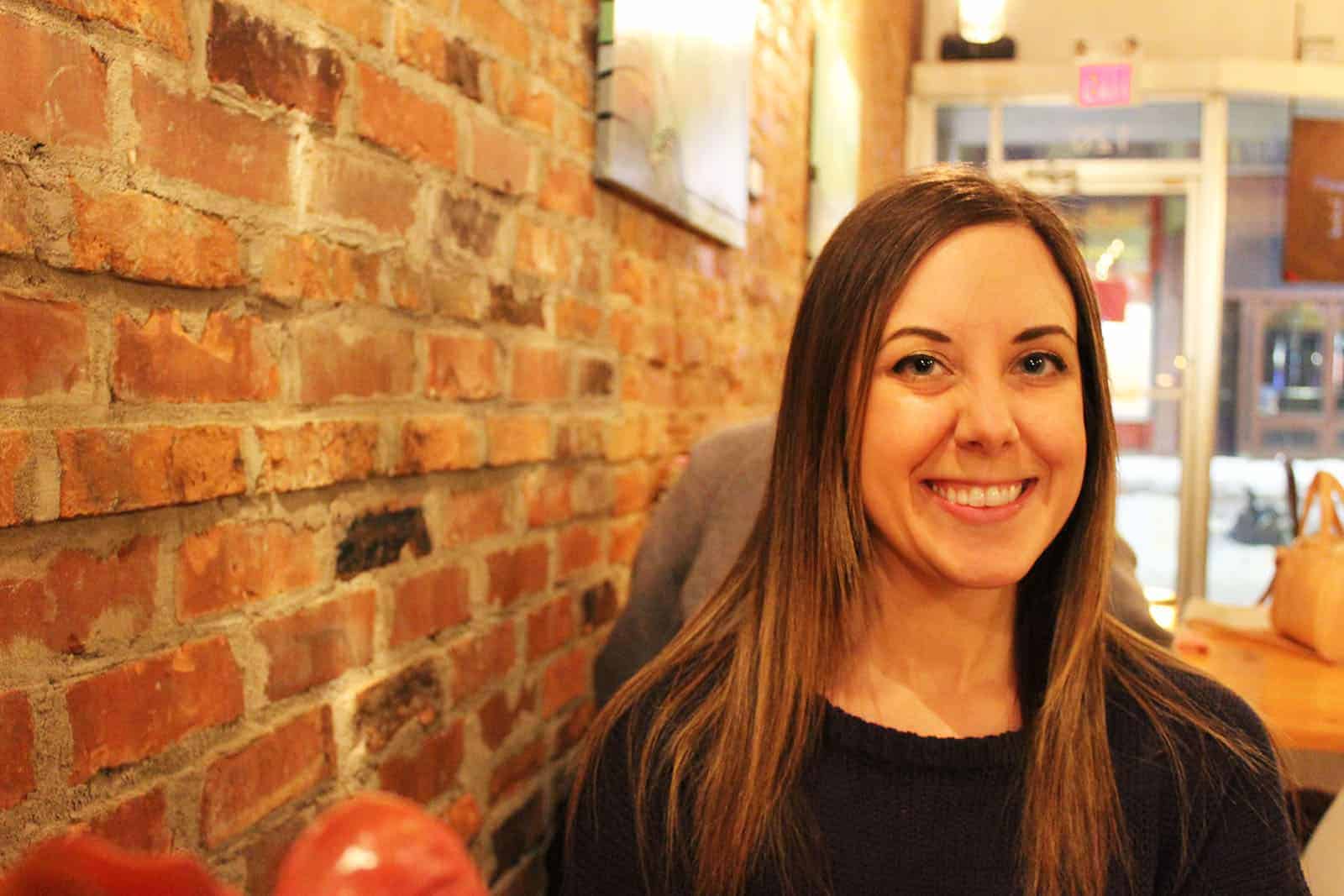 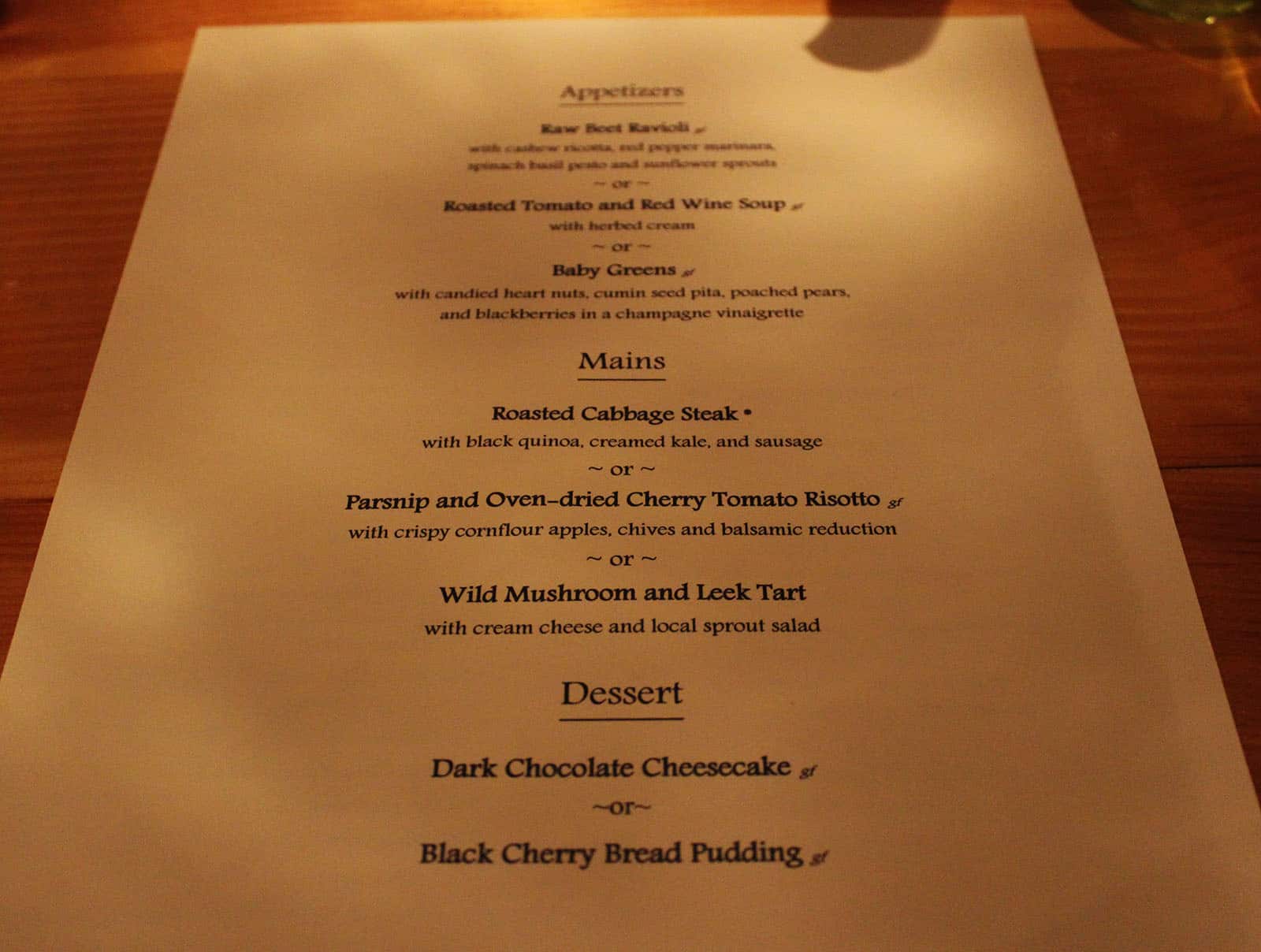 For $35 per person, we each chose one item from the appetizers, mains, and dessert sections of the prix fixe menu. We mostly chose different items from each other so we could taste two of the menu selections. For the appetizer, Justin ordered the roasted tomato and red wine soup (with herbed cream) and I ordered the baby greens salad (with candied heart nuts, cumin seed pita, poached pears, and blackberries in a champagne vinaigrette). 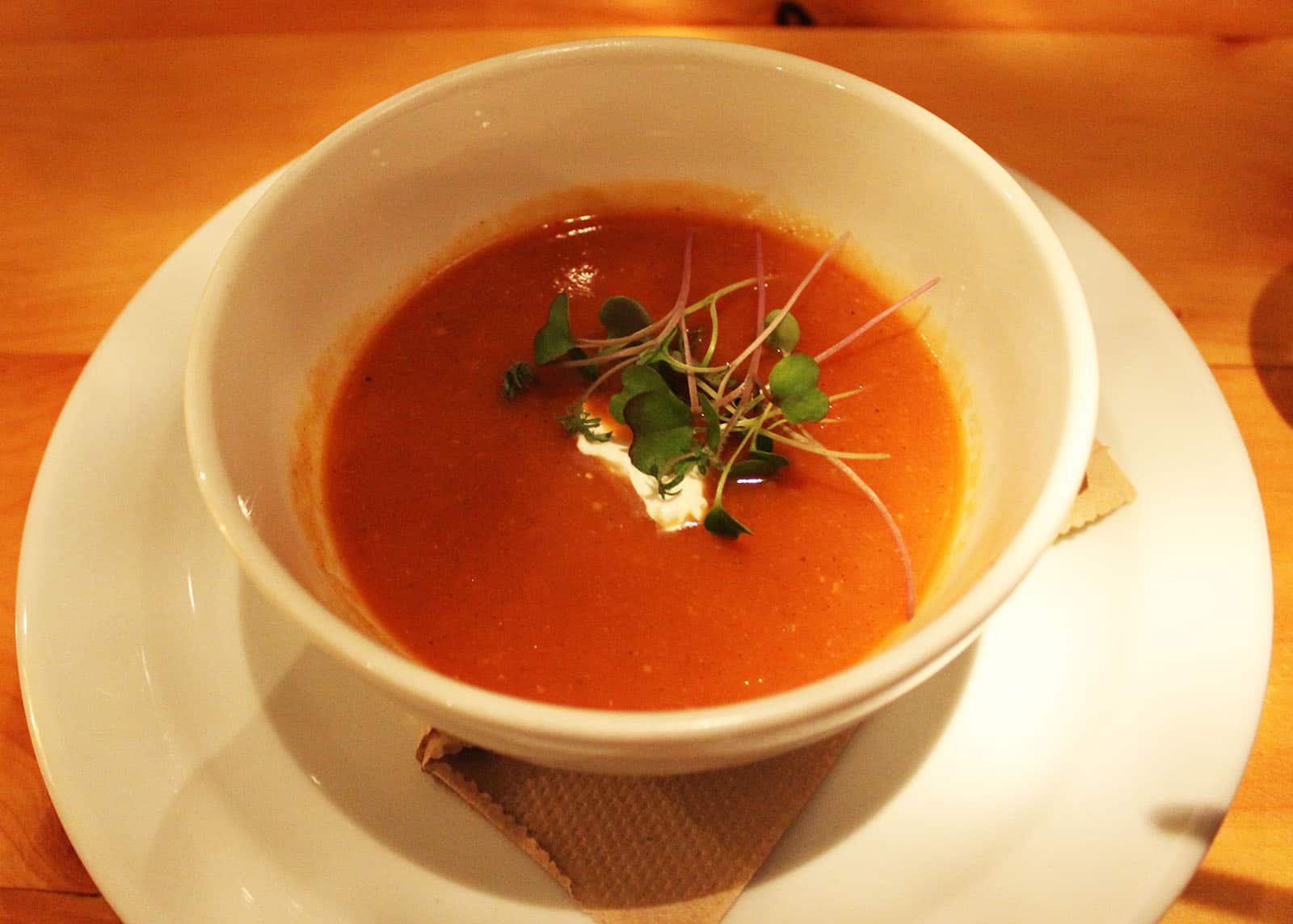 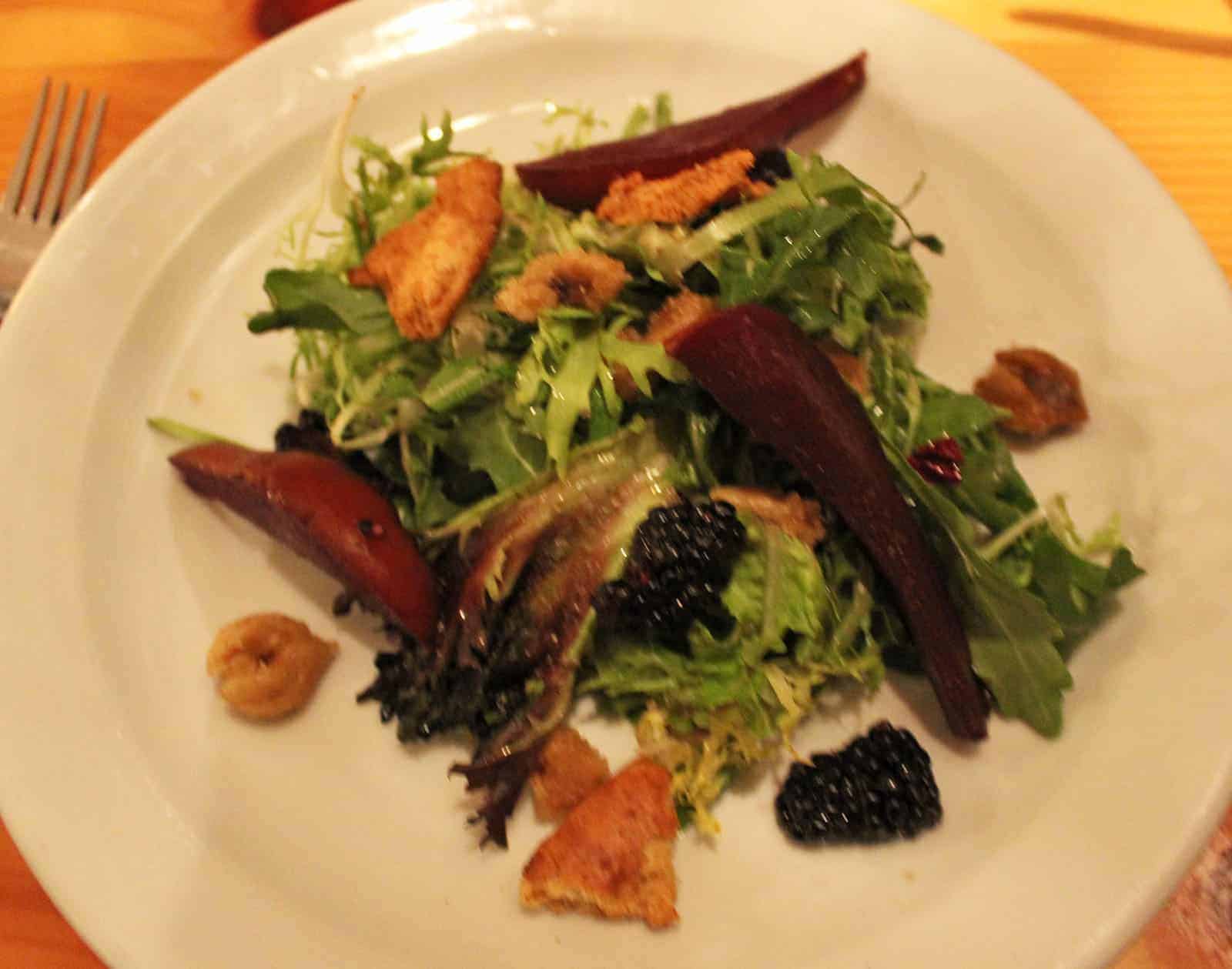 When trying the soup, I had one of those “I can’t believe it’s vegan!” moments. The herbed cream really made this tomato soup extra special. It tasted equally as rich as I can recall dairy cream tasting, though light at the same time. The salad was a delicious blend of flavours – there were healthy greens, crisp pita croutons, sweet blackberries and poached pears, candied nuts, and a light dressing. Every ingredient really worked well together!

For the main course, Justin chose the Roasted Cabbage Steak (with black quinoa, creamed kale, and sausage), and I chose the Parsnip and Oven-Dried Cherry Tomato Risotto (with crispy cornflour apples, chives, and balsamic reduction). I should also add at this point that there were several gluten-free items available on the menu that were all clearly marked. It’s great that Rise Above offers many meals for those who can’t eat gluten! 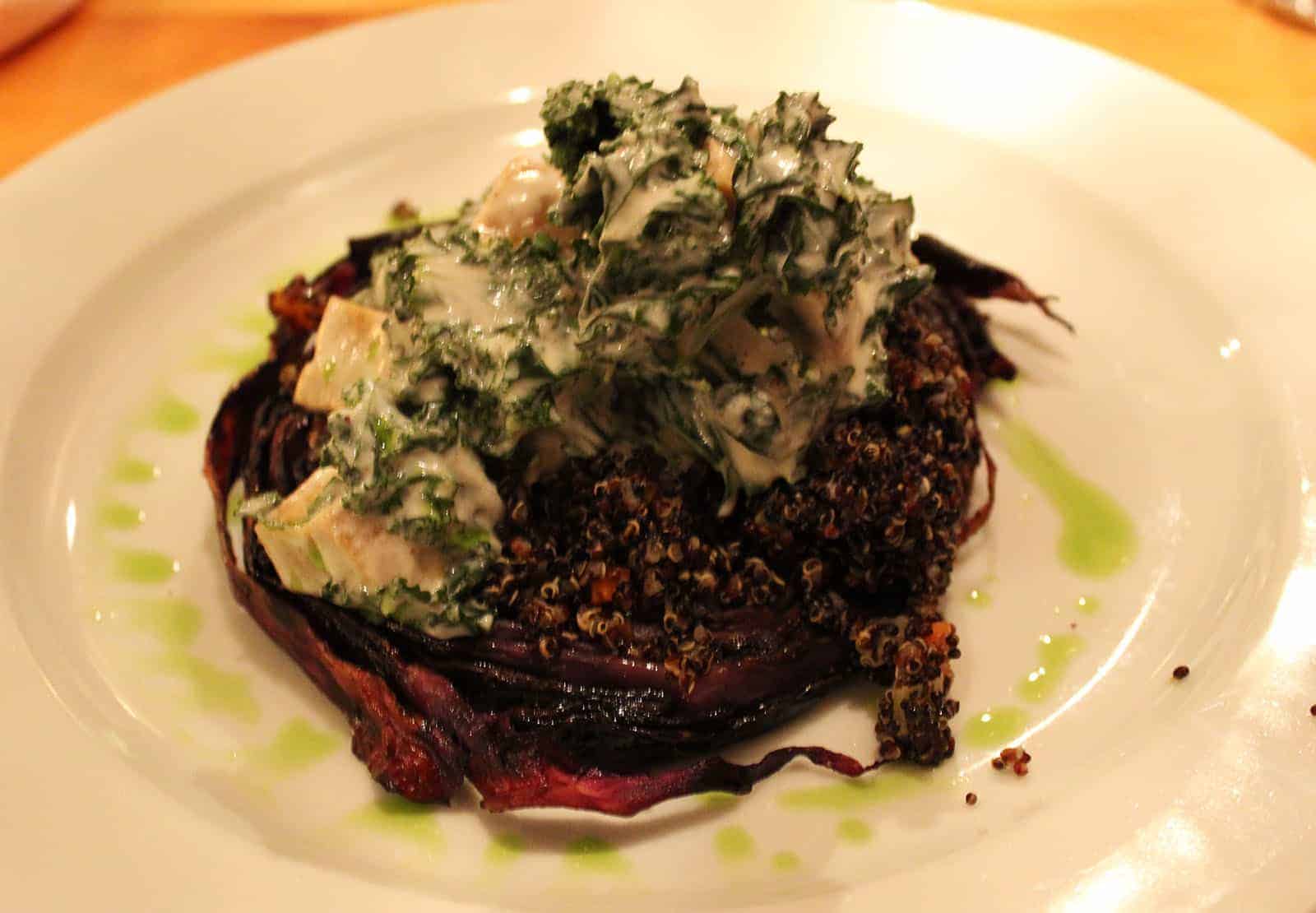 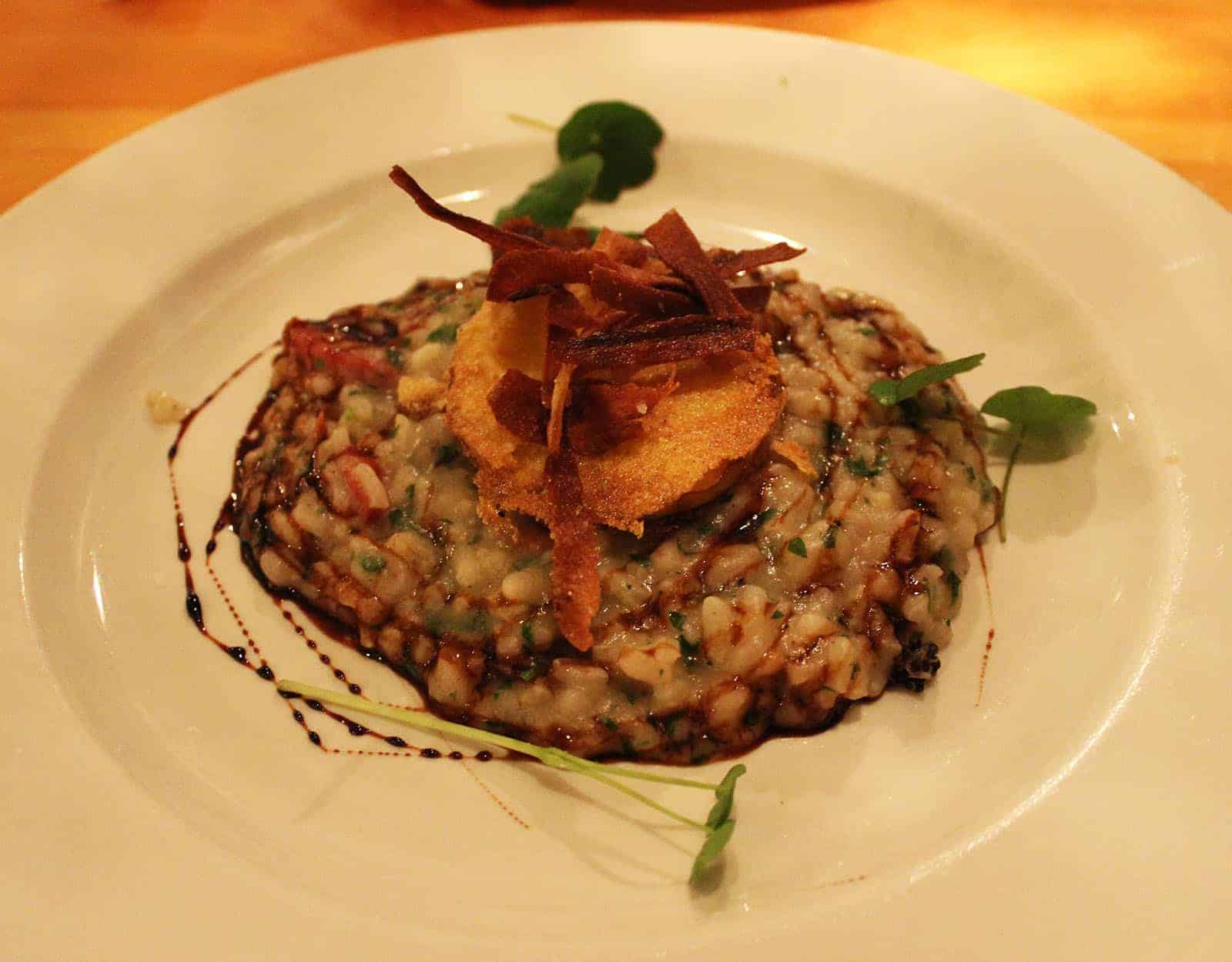 The cabbage steak was a really interesting concept as I’d never seen anything like it on any menu before. The cabbage was charred and offset by the creamy kale, the chewy sausage pieces, and the fluffy quinoa. You really had to eat a bite that included every element to truly appreciate this dish. As for my risotto, I actually devoured it really quickly…it was so good! I don’t think I’ve had a risotto since going vegan, and this one definitely exceeded my expectations. It was very creamy and the flavours were complex. I wasn’t sure at first what was in the centre of my meal until I tasted it…a sweet, cinnamon apple! It was almost like a small dessert on top of my main course meal! Surprisingly, everything went really well together, perhaps because the cherry tomatoes also had a sweetness to them. And of course, anything with balsamic vinegar is good in my books.

Before the dessert arrived, we were presented with two chocolate cherry truffles as a pre-dessert treat. How awesome is that?! Of course, they were super yummy! Can I have a small dessert before my regular dessert all the time, please? 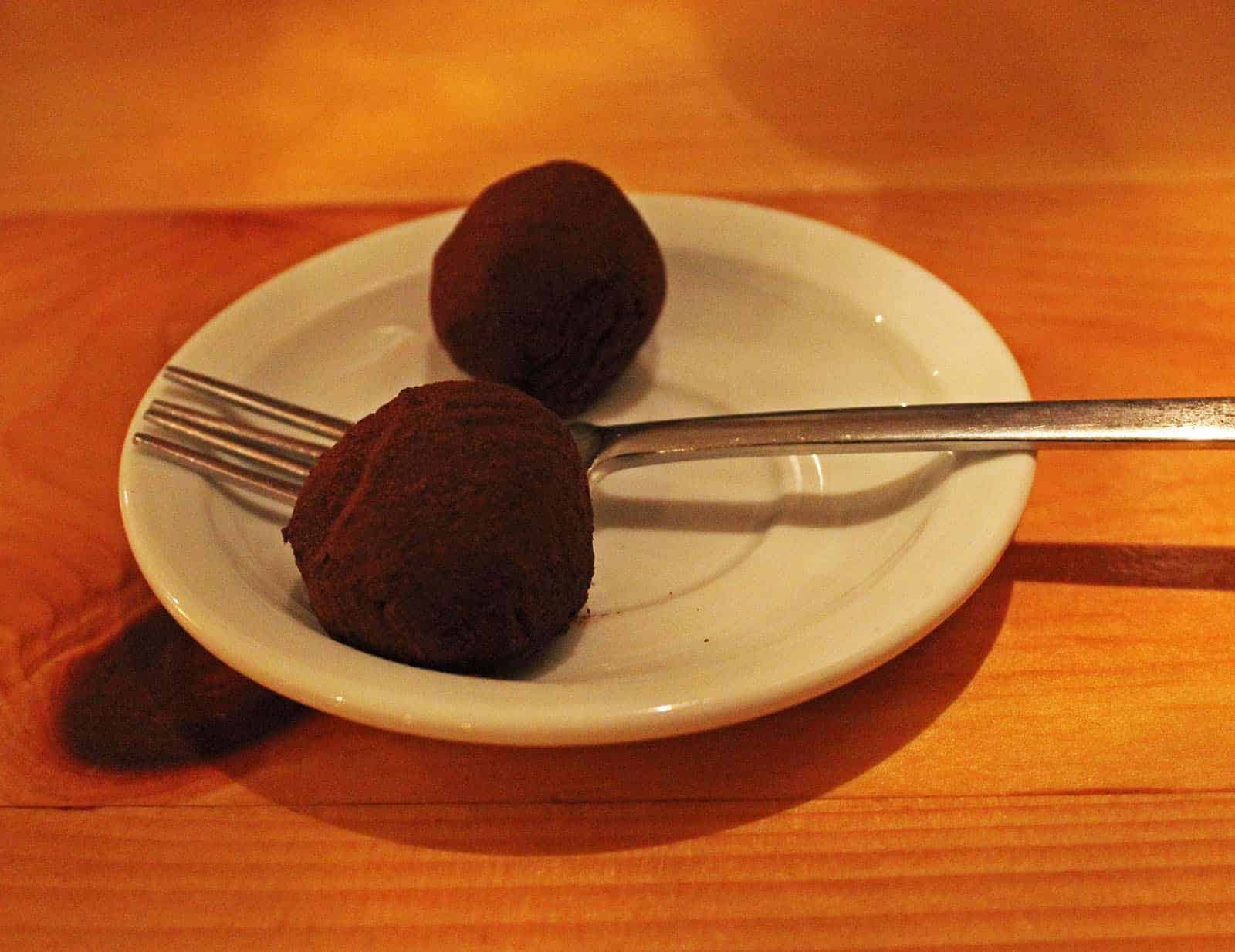 And as for dessert, Justin and I couldn’t resist ordering the same thing: we both wanted the dark chocolate cheesecake! And I’ll present you with another “I can’t believe it’s vegan!” moment: 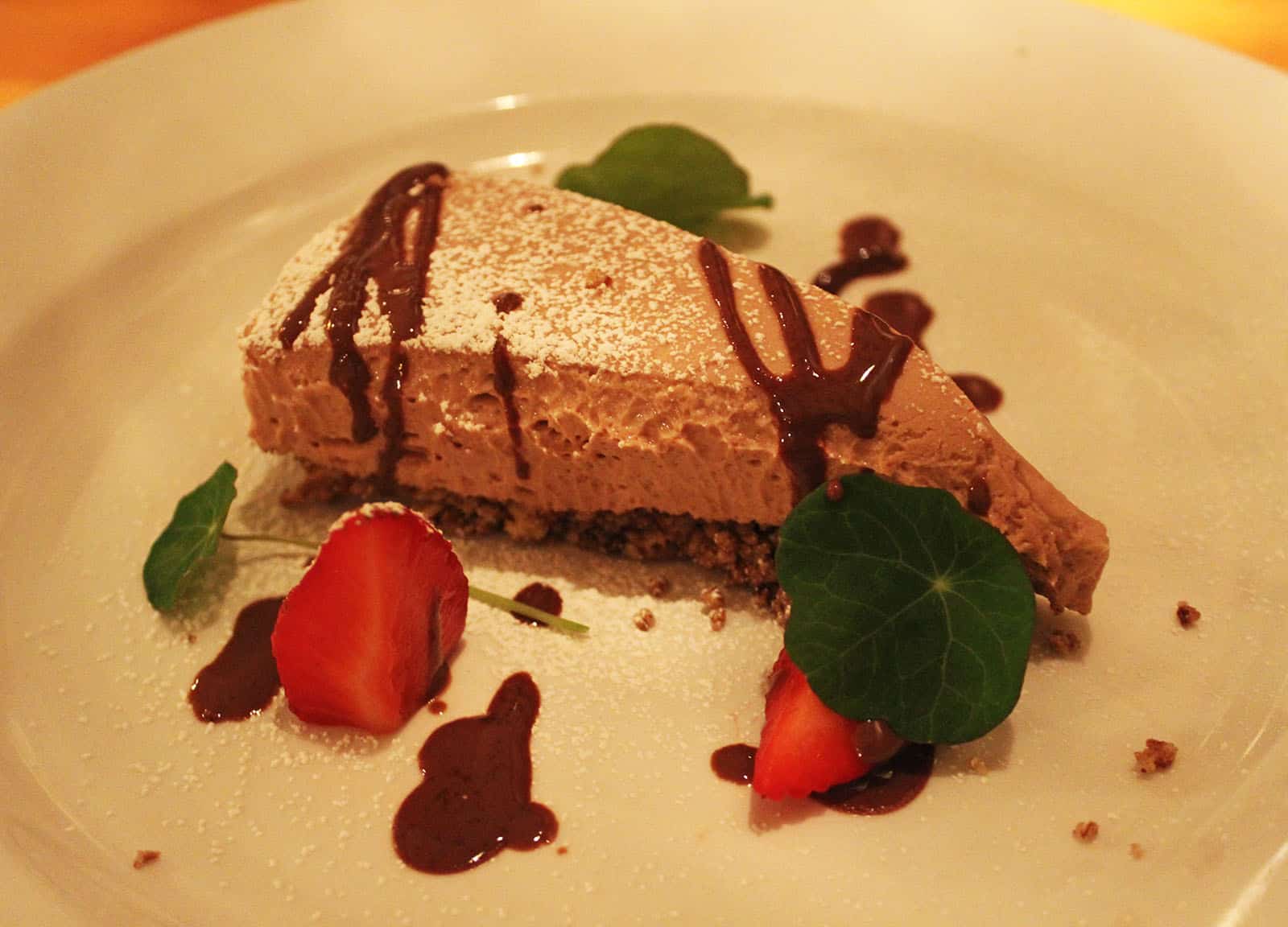 The cheesecake was rich and chocolatey, yet light and fluffy. There was a crumbly crust made of nuts that blended so well with the top layer of the cake. And who could resist that chocolate sauce drizzled over top of strawberries? It was a very romantic dish, perfect for Valentine’s Day. After we ate our cake, Justin and I were so full! But, not in a heavy, time-to-go-to-sleep way. We never really find that we feel like that since having gone vegan. Something funny did happen at the restaurant – our plates were all cleared away and we were expecting to be presented with the bill. Our server comes over with two plates of chocolate cheesecake in her hands and puts them down in front of us! Justin and I both look at each other realizing that she must have the wrong table. Before I could say something to that effect, Justin blurts out, “No! No more cake!” I guess it was the first thing that came to his mind as we had just talked about how full we were! Our server seemed a bit embarrassed and realized she must have had the wrong table! It was really funny for us though. It really did feel like that movie, Groundhog Day, where instead of re-living the same day over and over again, we would be eating the same dessert over and over again. Now that I think about it, that doesn’t sound all that bad! 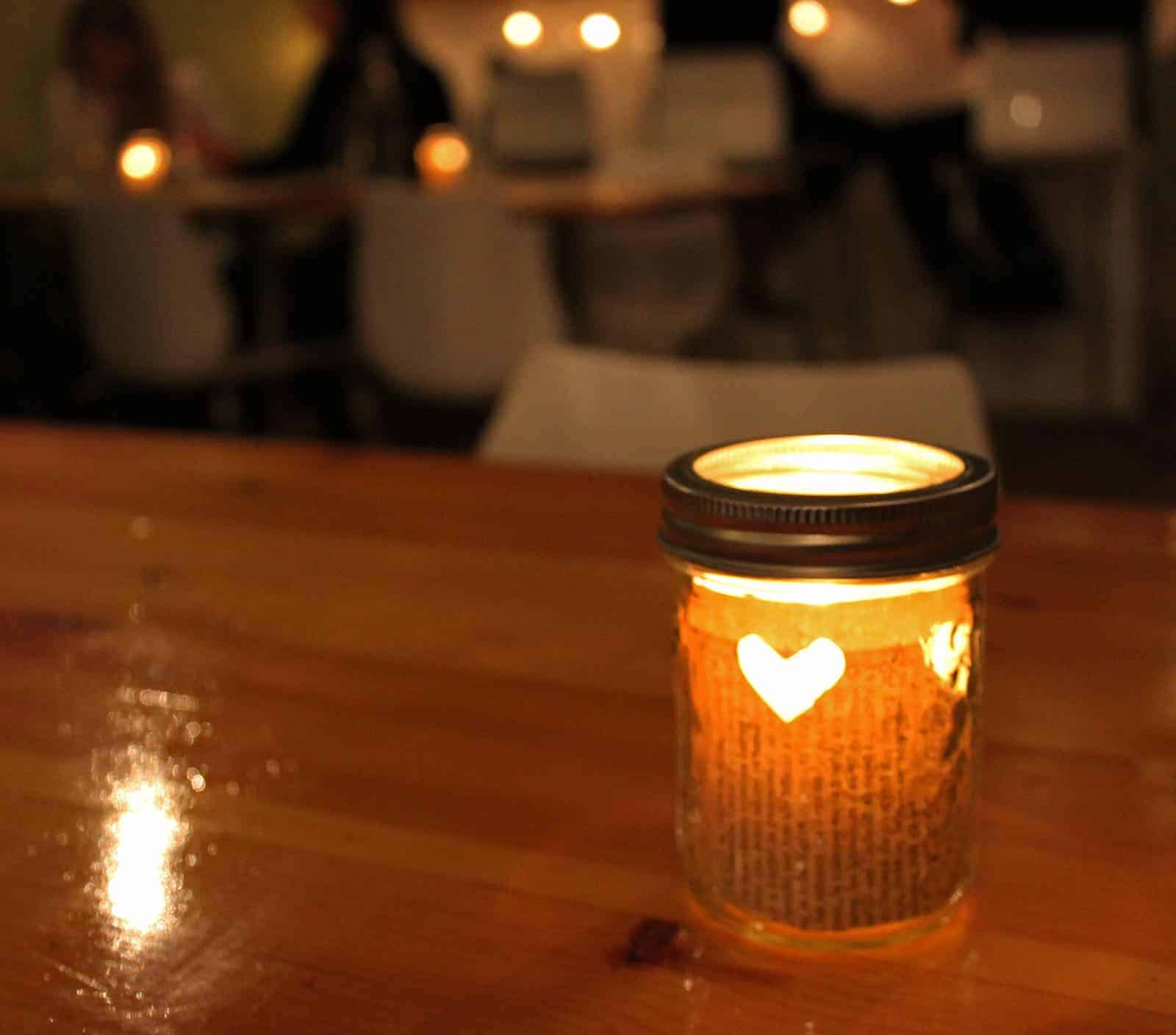 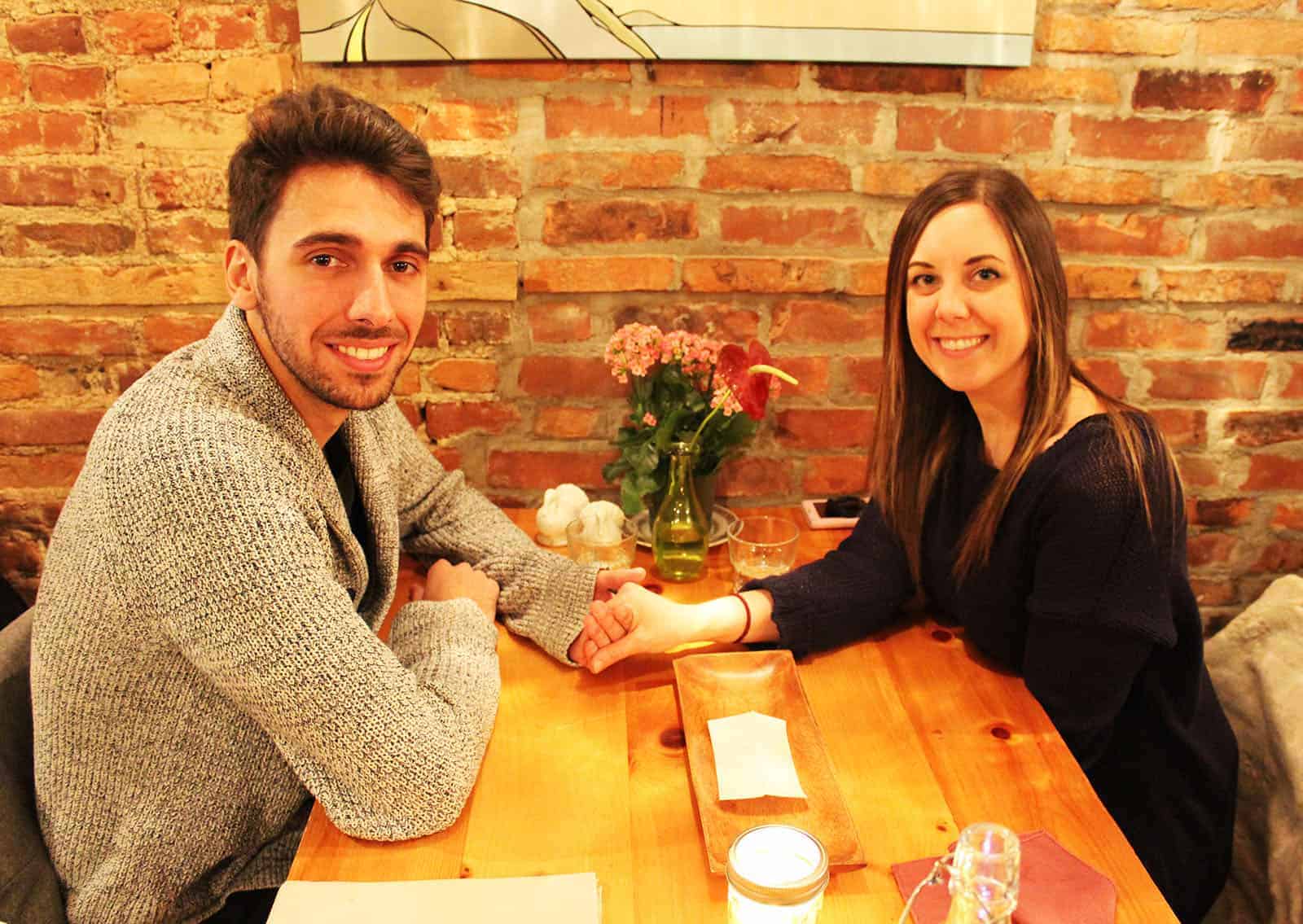 We thoroughly enjoyed our special three-course meal at Rise Above and I’m sure we’ll be back whenever we’re in the area! If you’re in the Niagara region or St. Catharines, be sure to stop by to taste their regular menu as it’s really awesome, too.

That cheesecake looks incredibly delicious, I'm craving for some now and it's only 9am here.