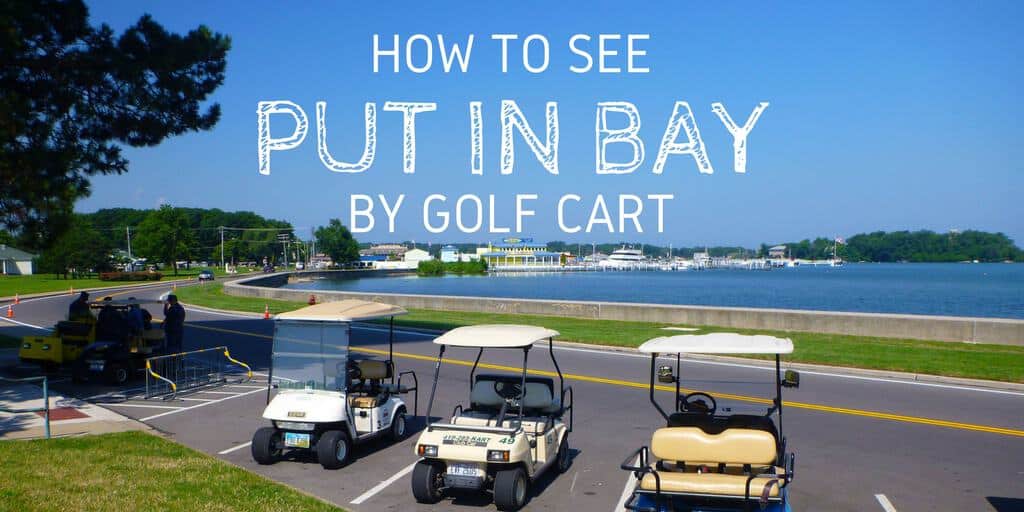 The best way to see the island is by golf cart!

There aren’t many cars on the island of Put in Bay. Only residents tend to bring their cars to the island. As Put in Bay isn’t a very big place and there aren’t too many parking spots, the preferred method of transport is by golf cart. While you won’t find car rentals on the island, you’ll find plenty of golf cart rental agencies. 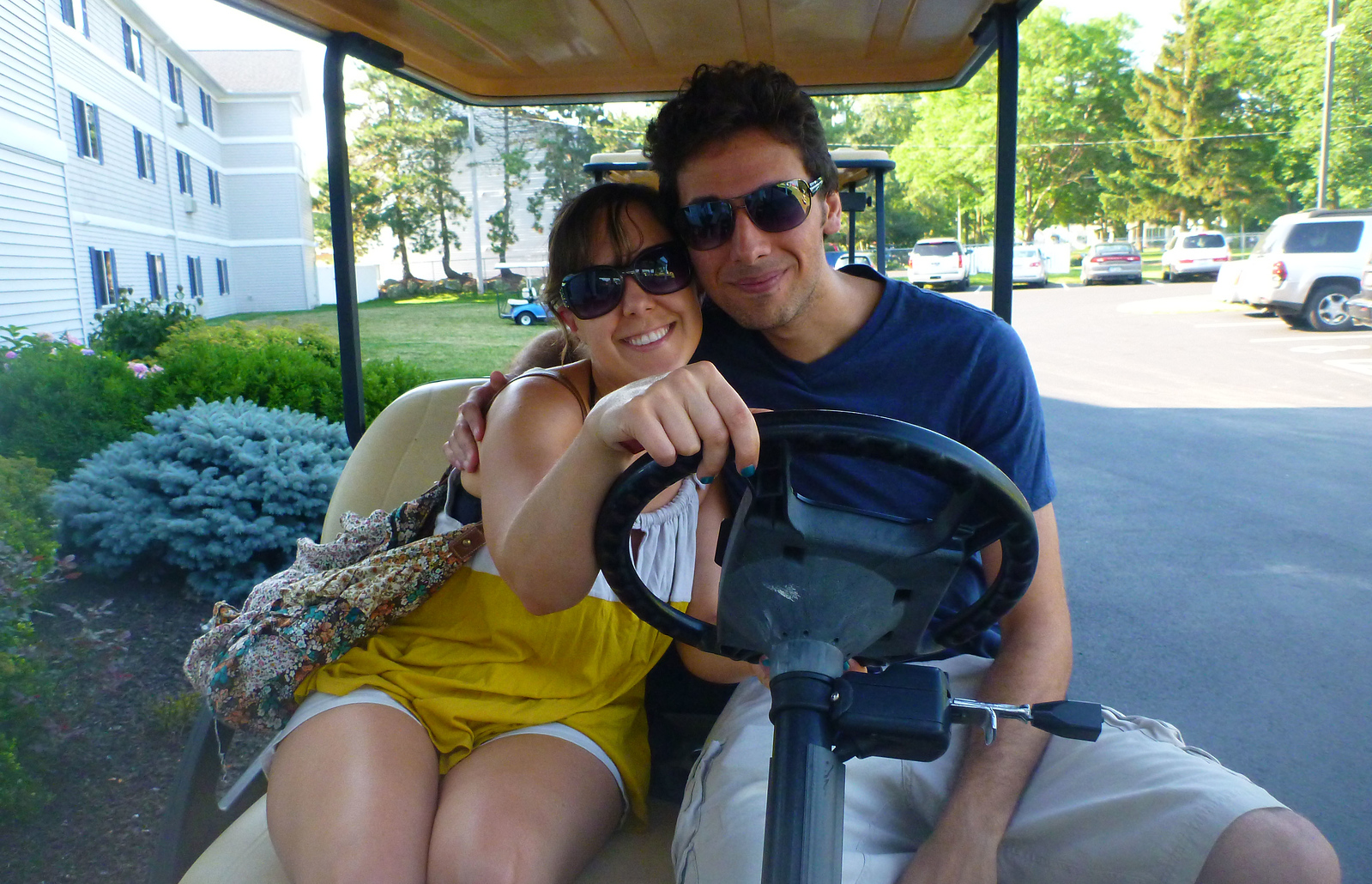 We rented a golf cart directly through our hotel, Bayshore Resort. In a few hours, you can tour Put in Bay by golf cart and see many of the main attractions. I went on a ride around Put in Bay with Justin and my best friend, Shannon.

We first drove from our hotel down the main street where you’ll find most of the restaurants and bars, Delaware Ave. We highly recommend stopping at the huge tiki bar in the evening, Mojito Bay. There’s live music at night, and they make the most delicious slushy drinks.

Delaware Avenue is also right next to the harbor. We enjoyed stopping to walk along the boardwalk, admiring the boats and the view of Lake Erie.

Put in Bay even has a drive-thru beer store! There are also snacks and other treats, accessible by foot and vehicle. 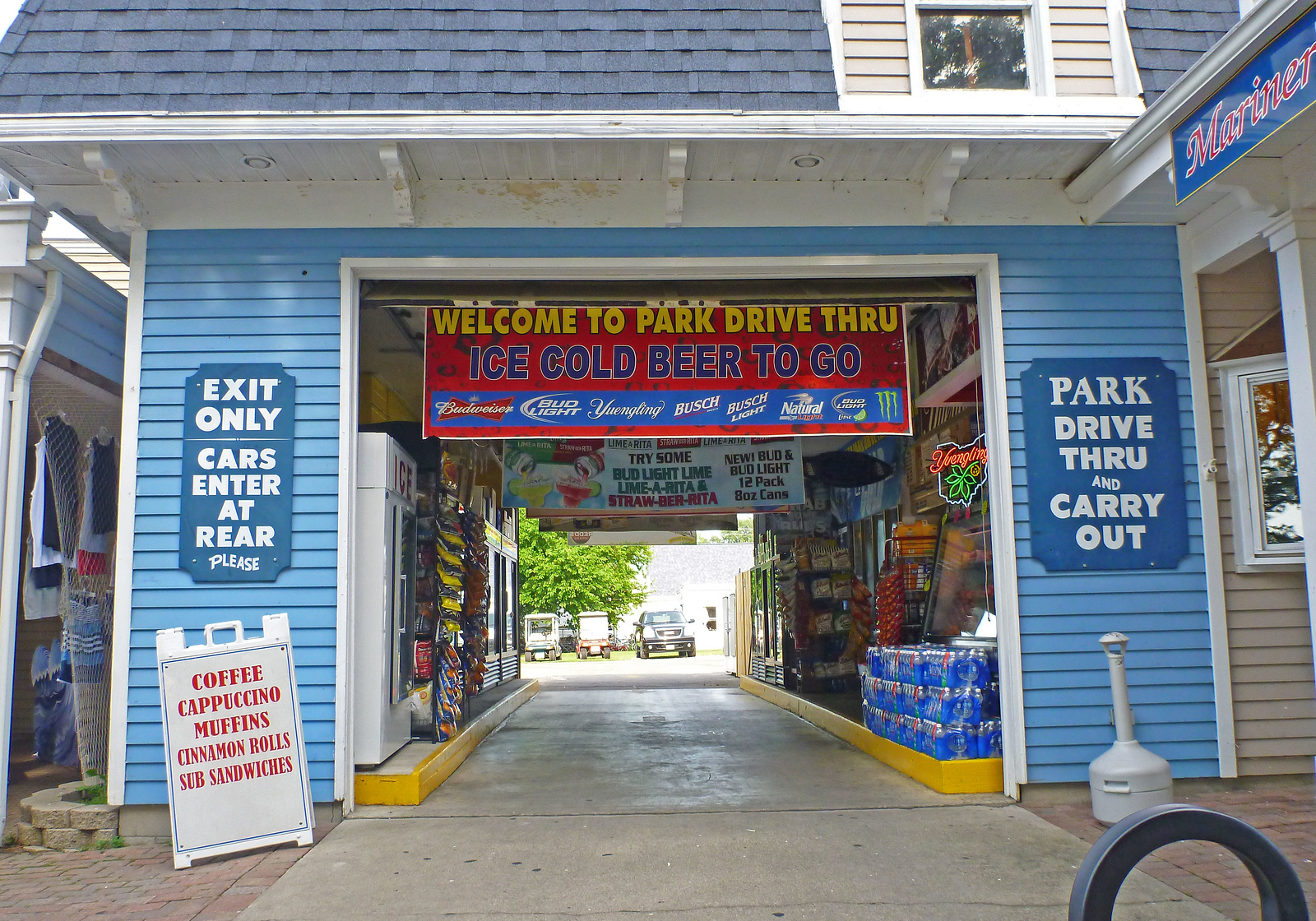 Enjoy the island from a new perspective from beneath the surface. There are underground cave tours operating every hour at Perry’s Cave. Take a guided tour of the cave for $8.00 per person. It was pretty cool down there – a crisp 52 degrees – a natural air conditioner on a hot day.

We had to be careful not to touch the ceiling as this would disrupt the stalagmite formations. This wasn’t a problem for me, but Justin is very tall so he had to crouch a lot. Perry’s Cave is one large cavern with many rocks that looked like various shapes (labeled as what they look like, such as “lion” or “alligator”).

Another main feature of the cave was the underground lake. It’s a greenish color as many people used to throw pennies into it for good luck.

Our guide was very informative and answered many of the questions from our group, which topped around 20 people or so.

South of Put in Bay Village, we discovered South Bass Island State Park. It’s a 33-acre park offering gorgeous views of Lake Erie. We admired a small cliff lined with trees from a rocky beach. Although it wasn’t the kind of beach where I’d like to swim, it was nice to stick our feet in the water on a hot day. This is also where one of the campgrounds is situated.

A short distance away, we came across the South Bass Island Lighthouse.

We walked around the property of this historic home that had a pretty garden and a great view of the lake. It is currently owned by Ohio State University and the lighthouse is on the National Register of Historic Places. While you can’t go inside the lighthouse, the property is quite lovely and the view is beautiful. 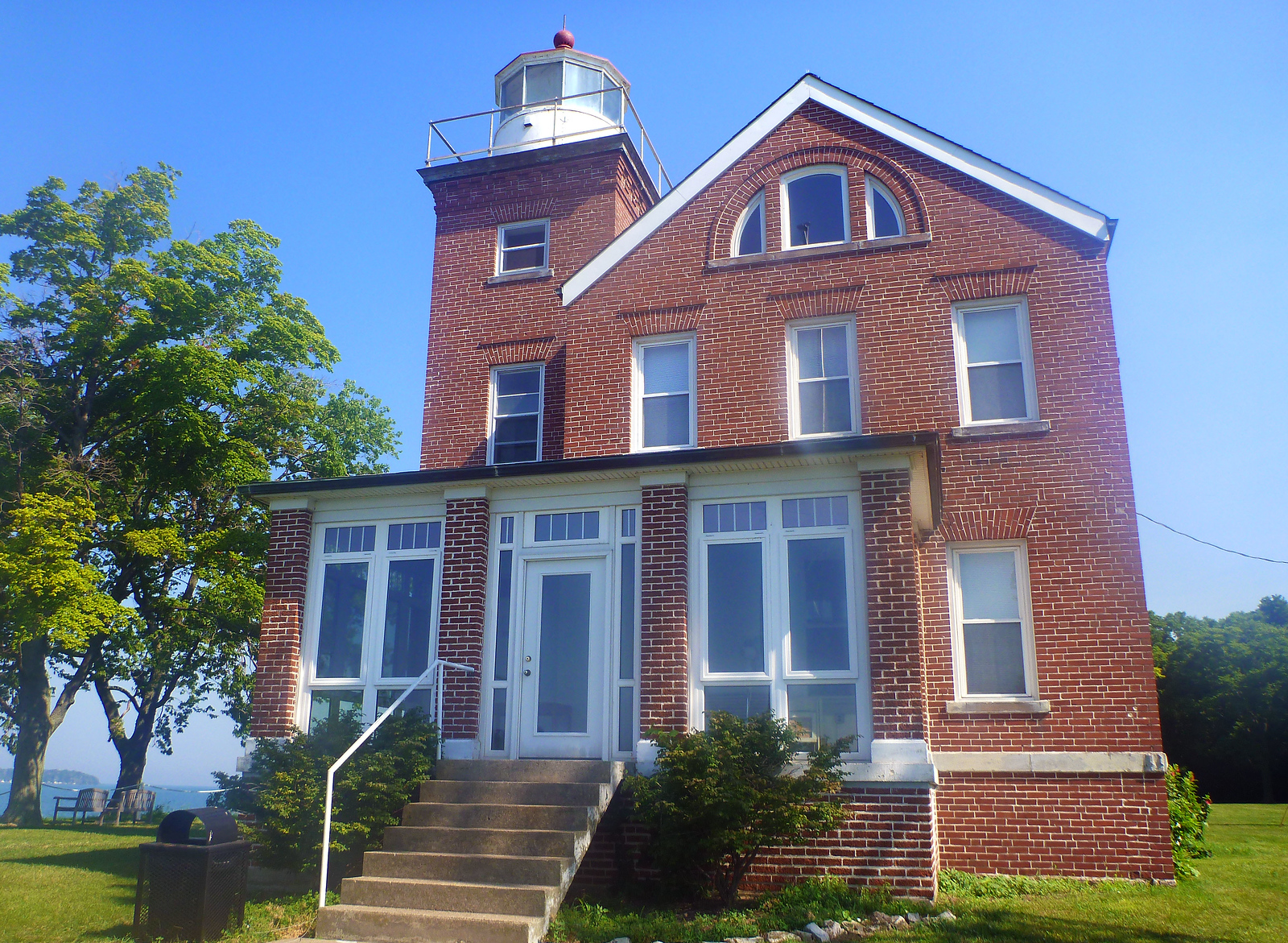 Driving back north into Put in Bay and past our hotel, we arrived at Perry’s Victory and International Peace Memorial. It is the third tallest monument in America and visitors are able to travel up to the top of the tower for an amazing 360 degree view of the entire island.

We paid our entrance fee (only $3.00!) and rode the elevator up to the top. There were park rangers around and you could ask them any questions about the memorial tower or Put-in-Bay. They were a wealth of knowledge and incredibly friendly.

There was an amazing view of the whole island from up at the top. We could walk around the entire tower for a 360 degree view of Put-in-Bay, Lake Erie, and the surrounding islands. There were maps placed out in each corner describing the places you could see from each vantage point. 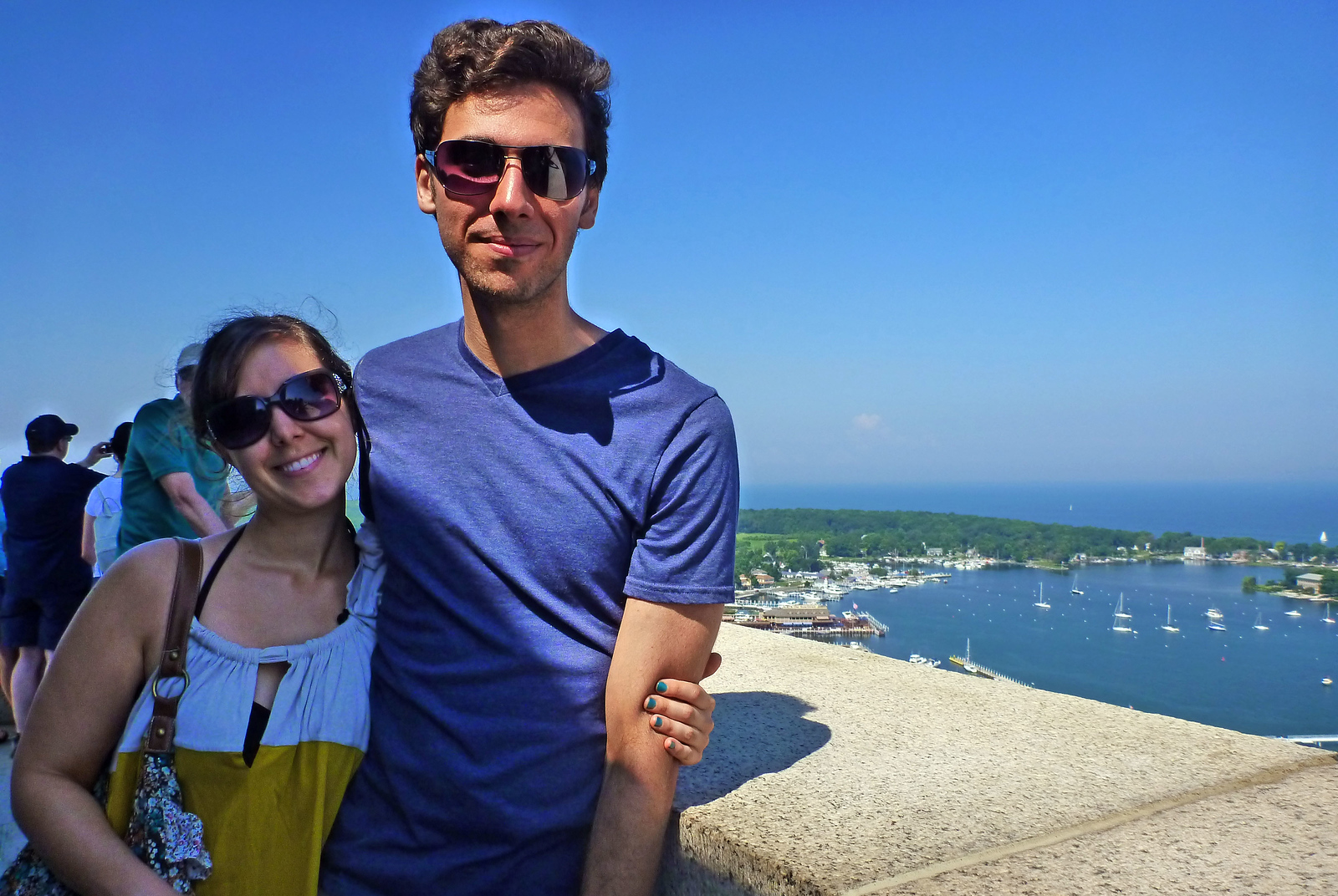 Here’s a short video of the view from up top!

With a golf cart, you can drive all over the island and visit every main attraction.

Justin and I also explored Put in Bay and South Bass Island by two other interesting modes of transportation: by segway and by kayak!

Here is also a short video of a small portion of our golf cart ride. We were driving down a random street that was a bit bumpy. I was sitting in the back and flying around a bit.

Check out the rest of our Put in Bay travel photos! 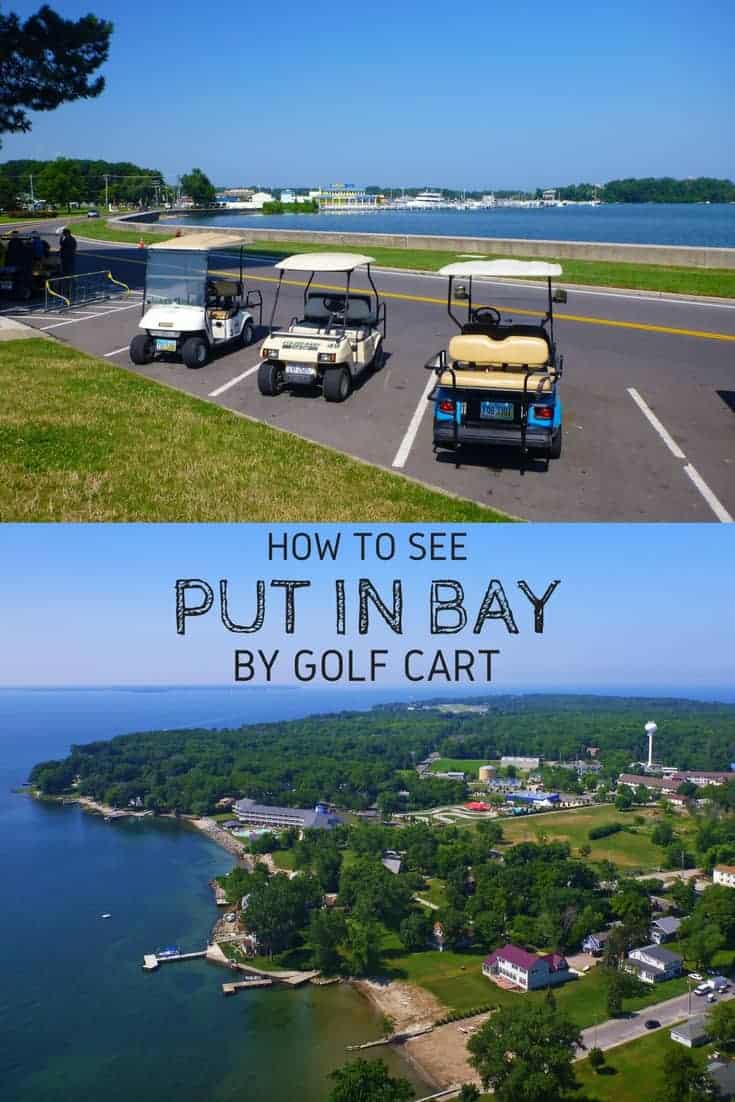 Have you ever toured a place by golf cart before?