When searching for vegan food in Fort Lauderdale, I really didn’t have to look too far. Within walking distance of our hotel (the Hilton Fort Lauderdale Marina), I was able to locate a great lunch spot called Fresh First. On my last trip to Fort Lauderdale with Justin, we dined at a charming upscale eatery called Sublime Restaurant. I was easily able to find a third restaurant with an emphasis on vegan, plant-based, gluten-free, wholesome, and nutritious cuisine – Green Bar and Kitchen. It also happened to be located on 17th Street, about a fifteen minute walk from our hotel. Not only was our hotel close to the cruise pier, Port Everglades, but it was also practically beside two vegetarian restaurants. Sometimes while traveling, it’s difficult to find vegan food; in this case, it was shockingly simple.

The story behind the restaurant’s conception is quite moving. The owners truly have a passion for healthy nutrition, and strive to help others maintain a plant-based lifestyle. The owner, Elena’s brother suffered a stroke a few years ago. Both owners, Elena and Charlie, helped Elena’s brother fully recover by incorporating nutritious foods into his diet. Convinced that others could benefit from a plant-based lifestyle, the pair traveled all over South Florida with their food truck, Zenergy, selling vegan and gluten-free smoothies, raw foods, and desserts. After adding a third member to their team, a health-conscious restauranteur, they opened Green Bar & Kitchen, allowing many visitors to sample their healthy, vegan, mostly gluten-free meals.

As I walked inside Green Bar & Kitchen (or, GBK as they refer to themselves online) for the first time, I noticed that the decor was bright and clean, with greenery bursting from the walls and small plants placed on many surfaces. I felt right at home in this relaxed, earthy, and inviting environment. Immediately, we were greeted by the smiling faces of the friendly staff members behind the counter. In the style of a casual dining establishment, all of GBK’s menu options were printed above the counter. We took to the task of making those tough decisions: what to order. There were so many great choices and I felt like I could have gobbled up the entire menu if I could. In the end, I decided to go with the Roasted Bowl (Brown rice, quinoa, garlic, cauliflower, broccoli, sweet potato, onion, zucchini, yellow squash, garlic aioli & Santa Fe dressing) and Robyn ordered the Rustic Burger (Roasted sweet potato, garlic, onion, pecans, kale, lettuce, tomato & chipotle mayo all on a burger bun). We paid in advance at the cash and took a numbered sign to our table. Oh, and if you’re looking for water, utensils, and condiments, they’re on a table right across from the front counter. While we didn’t order any juices this time around, the complimentary water was packed with flavor as various slices of fresh fruit and herbs were added to the water (I love that!). We opted to sit outside on the patio because it was a warm evening and we couldn’t get enough of the fabulous Southern weather. 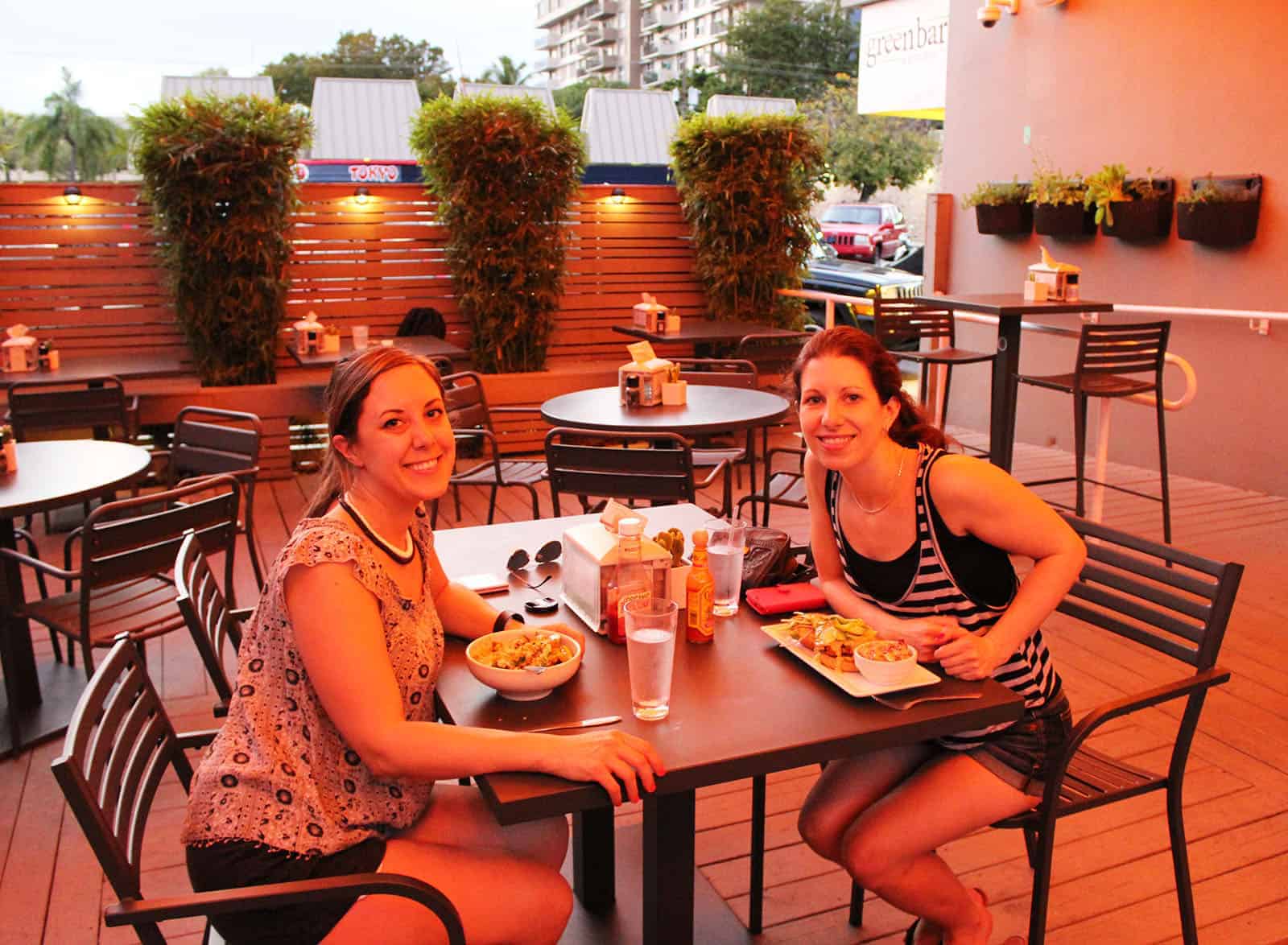 While we were outside, we met a really friendly local who told us about more great spots to find vegan food and enjoy the region’s art scene. Unfortunately, we’ll have to seek out the spots he told us about next time as we were only in Fort Lauderdale for the night. I wish I could remember his name, but thank you so much for taking our photo!

The food arrived with lightning speed and within minutes, I was savoring the tasty flavors of the veggie bowl. I’ve actually never tasted a bowl that blended both rice and quinoa – the more grains, the merrier! My body was thankful for all of the nourishing veggies I was consuming in that meal. The garlic aioli and the Santa Fe dressing added a nice kick. A little bit of spice is always nice! 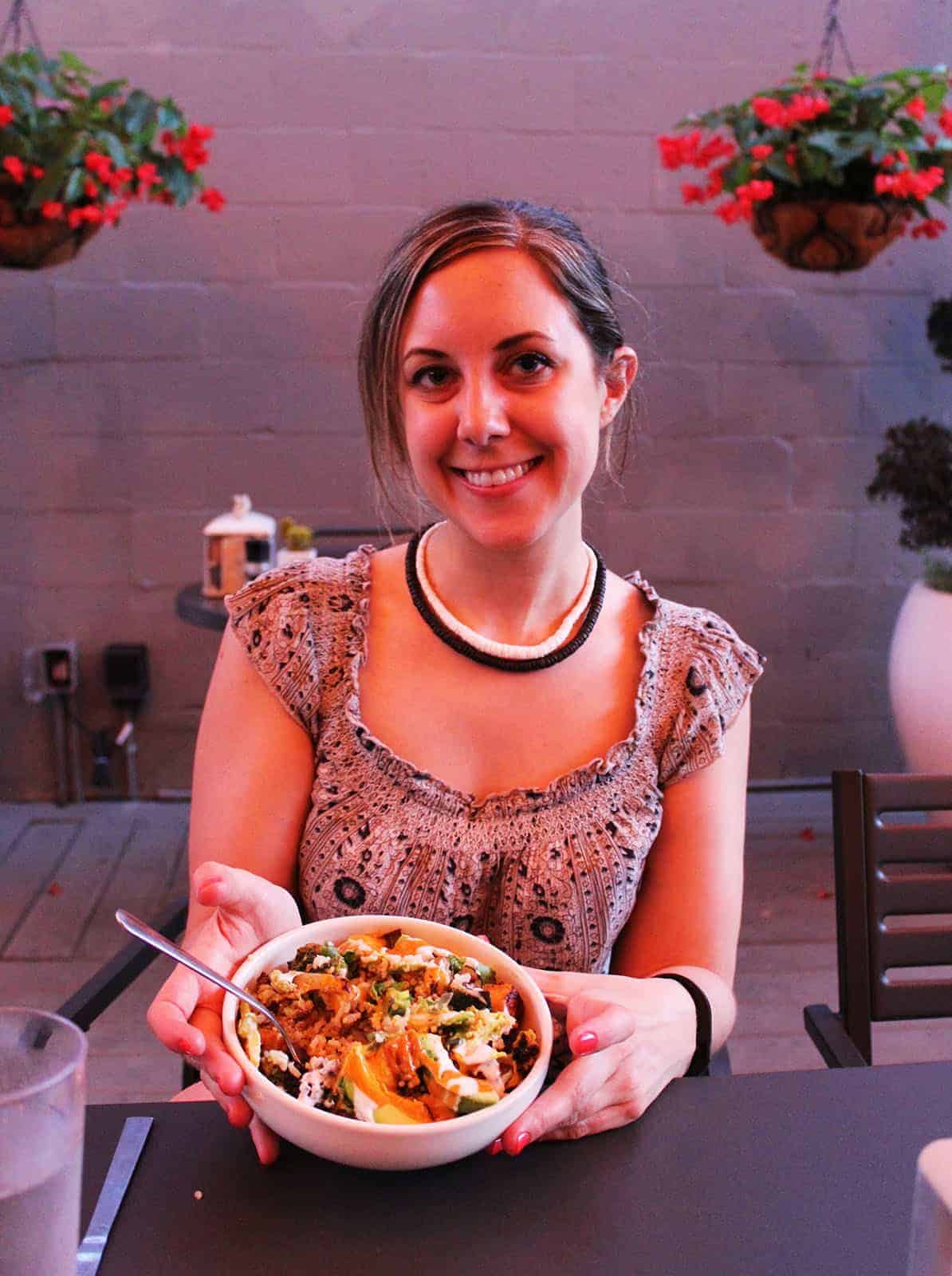 The meal was very filling, which didn’t leave any room for dessert. However, I couldn’t resist taking one of their cupcakes to go. There were several dessert options, which included cupcakes, bars, cookies, and donuts. Even though they all sounded really yummy, I decided on a peanut butter cupcake. Unfortunately, I forgot to take a picture of it and ate it that night in the hotel room, but it was great! It was a vanilla cupcake with peanut butter flavored frosting, and there was even peanut butter in the middle of the cupcake. YUM. I did order a coffee right after my meal because I love drinking coffee at all times of the day. Robyn decided to order a beer. I went inside to order the drinks and asked her which one she wanted, to which she replied, “Just pick one out for me.” There was a huge wall of fridges inside with so many different types of craft beer! It was tough to choose.

What made me choose this one? Well, it had a cool name, the bottle had a cool design on it, and the description sounded pretty damn good. And I was right! I tried a sip and it had a little bit of a spiciness to it from the peppercorns and coriander, yet it was refreshing with notes of citrus from the orange and lemongrass. It was the perfect type of patio / South Florida beer. There were many other drinks there, including juices, kombucha, iced tea, and wine.

The verdict:  I adored this restaurant! I really wish that it was down the street from my home, so I could try everything on the menu. I’ll have to settle for returning when I come back to South Florida sometime.