The Royal Ontario Museum (ROM) in Toronto is Canada’s largest museum of natural history and world cultures. It is celebrated as one of North America’s best museums. For a limited time, visitors to the ROM can attend the newest exhibition, The Forbidden City: Inside the Court of China’s Emperors. For the first time in Canada, we are able to view rare and ancient artifacts spanning five centuries of Chinese imperial life. Presented in collaboration with Beijing’s Palace Museum, these priceless treasures illustrate a fascinating history of life within the Forbidden City. Let’s take a detailed look at the Forbidden City Exhibition at the ROM. 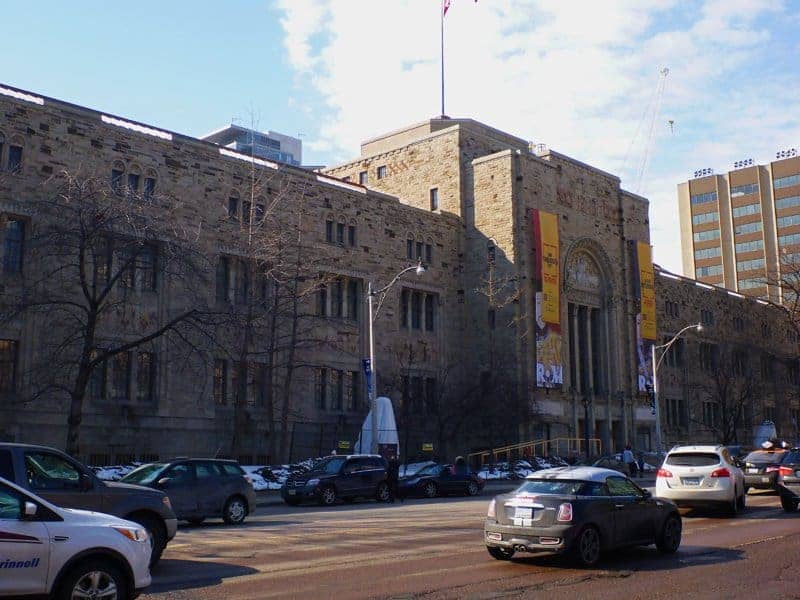 Justin and I traveled on the GO train from Mississauga to Toronto’s Union Station. Then, we hopped on the subway for a quick ride to Museum Station, which is right beside the ROM. We love the idea of being “tourists in our own town” as Toronto is truly a fascinating city with so many different places to explore!

The ROM’s building itself is something to be admired – the architecture of the structure is so incredibly unique! The original building, pictured above, is the west wing of the ROM and originally opened in 1912. There have been several additions and renovations over the years, including the spectacular Michael Lee-Chin Crystal section. Designed by architect Daniel Libeskind and inspired by the museum’s gem and mineral collection, the design was dubbed “the crystal” due to its crystalline shape. From the ROM’s website:

Considered to be one of the most challenging construction projects in North America for its engineering complexity and innovative methods, the Lee-Chin Crystal is composed of five interlocking, self-supporting prismatic structures that co-exist but are not attached to the original ROM building, except for the bridges that link them.

Here are some pictures that we snapped of the exterior Crystal structure that faces Bloor Street: 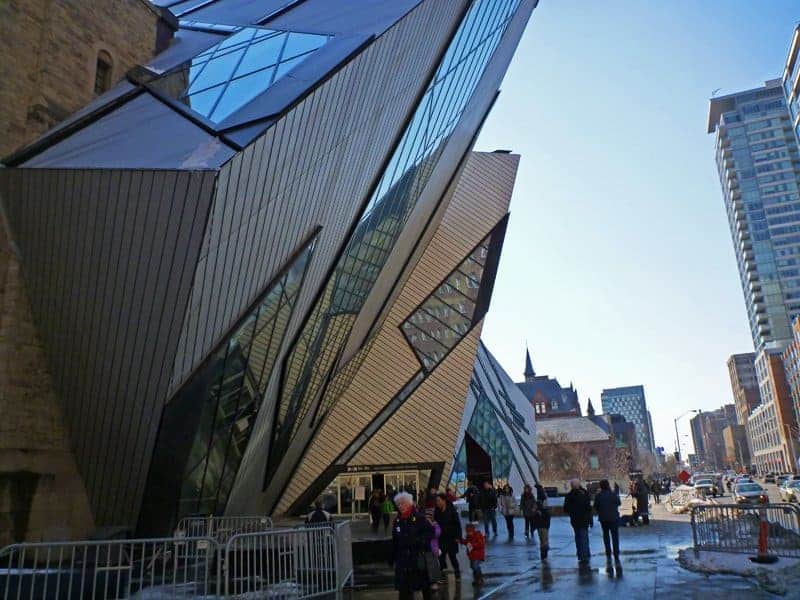 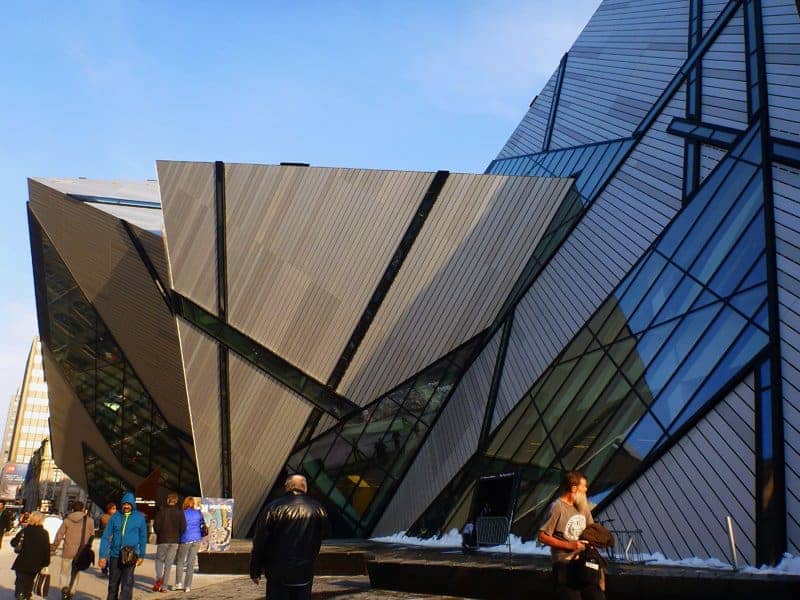 Inside the ROM, we took the elevator to the basement where the Forbidden City exhibition was on display in the Garfield Weston Exhibition Hall. When we entered the exhibit, we immediately saw a giant screen from floor to ceiling showing present day images of the Forbidden City / Palace Museum in Beijing, China. In front of the giant screen, there was a long plaque that extended across the room. This sign provided visitors with a timeline of the Forbidden City, from its inception to the fall of this immense empire. The timeline compared events in China to historical events occurring worldwide, particularly in the West, to give us some perspective.

What was the Forbidden City?

The Forbidden City was the Chinese imperial palace from the Ming Dynasty to the end of the Qing Dynasty. For 500 years, it was the ceremonial and political center of Chinese government, as well as the home of the emperors and their families/officials/servants. It is located in Beijing and is now home to the Palace Museum. More than 80 of the exhibition’s objects have never before traveled outside of the Forbidden City.

It took 14 years to build the Forbidden City and it occupies 728,000 square metres. Up to one million workers were involved in the construction. It was completed 594 years ago. There are more than 8700 rooms, 980 buildings and 90 architectural complexes in the Forbidden City. 24 emperors resided there over the course of its history. It takes 1.5 hours to walk from the South Gate to the North Gate of the Forbidden City.

For the select few who were ever given permission to enter The Forbidden City, the Outer Court was the official space where the emperor displayed his power. We saw several items on display as part of the Imperial Throne Set: 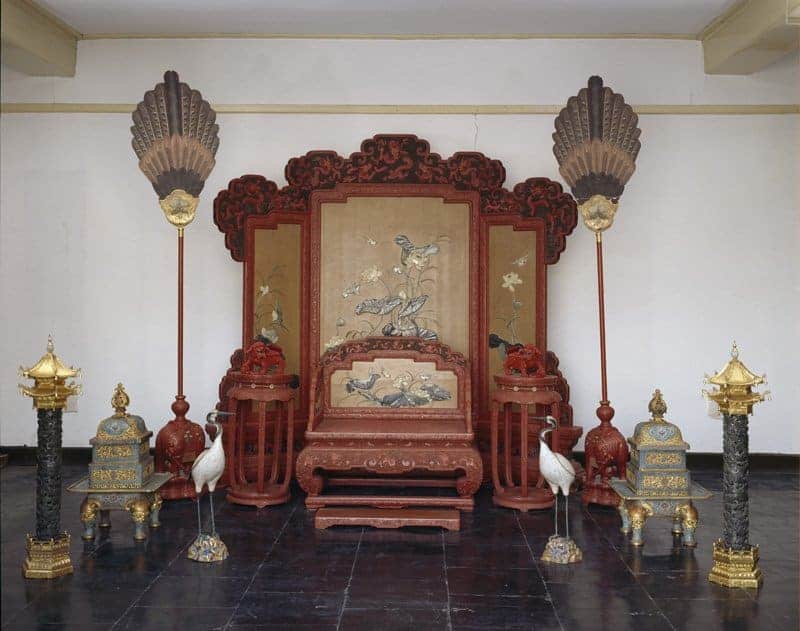 
The throne was not made for comfort, but as a symbol of the ruler’s imperial and authoritative power. It was from the Qing dynasty during the Qianlong period and made from lacquered wood, jade, and other materials. Some items from this display include the Imperial Throne Seat, a Screen, Fans, Incense Holders and more.

The Emperor and the Color Yellow 
The color yellow was strictly reserved for royal families and could not be used in any way outside of the Forbidden City unless explicitly permitted by the emperor himself. The bowl pictured above is an Imperial yellow-glazed bowl from the Ming Dynasty with the Wanli reign marks (1573-1620). This is an extremely rare object.

Fun Fact: For Emperor Tongzhi’s wedding, the Imperial household department commissioned 10, 072 wedding pieces from the Imperial kiln and it took craftsmen five years to make everything before the wedding in 1872. Only 3019 pieces remain in the Palace Museum’s collection. 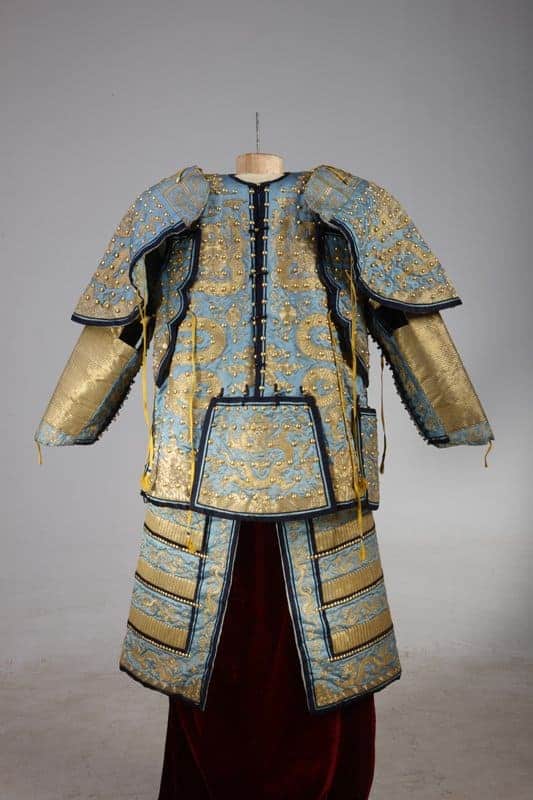 
The Emperor wore a ceremonial suit of armor, which was truly for display rather than for protection. He ruled as the head of the military and it required a special suit of armor that was more a costume than anything. This treasured object is from the Qing dynasty, Yongzheng period and is made out of cotton, silk, copper and metal.

There were many large murals and paintings that told stories of the emperor’s military battles and hunting expeditions.

Music in the Forbidden City

Orchestral music was a traditional part of ritual ceremonies in China for over 3000 years. Bells played a very important role in this tradition. In 1104 (before the Forbidden City was constructed), Emperor Huizhong had 336 bells produced as an exact copy of an ancient bell form of the Eastern Zhou period (771-256 BCE). Today, only 30 of these bells survive (and you can see two of them on display!).

The Importance of Dragons

Dragons were the ultimate symbol of Imperial power. They were on utensils, artwork, official paperwork, plates, and more that served as a reminder to everyone that the emperor held the most power. Dragons and phoenixes were the two most prevalent motifs found within the Forbidden City. There were 12,654 dragons incorporated into the Hall of Supreme Harmony’s architecture and design.

From the display of rare artifacts from the Outer Court, we traveled to the Inner Court portion of the exhibit. Here, we viewed items from the residential space where the imperial family and their eunuchs lived. As a side note, something that I absolutely loved about the ROM’s Forbidden City exhibition: there were so many informational plaques, that I truly felt as though I learned so much about China’s history! Not only were the objects themselves described, but we received a valuable history lesson about many aspects of Imperial life in China.


Emperor Yongzheng, as a cultivated man, portrayed himself appreciating the cultured surroundings in his palace. There were many self-portraits of Emperor Yongzheng in the exhibition, “enjoying pleasurable activities” such as playing a musical instrument, fishing, or meditating. He was one of the most accomplished emperors of the Qing dynasty, along with Emperor Qianlong. Emperor Qianlong produced more than 42,500 poems! There was even a painting called “Emperor Qianlong Viewing Paintings” that illustrated his love for collecting art – it was a painting of him viewing a painting! Both Emperors Yongzheng and Qianlong were very cultured; they loved art, music, and poetry. 
Before he became Emperor Yongzheng, he was known as Prince Yinzhen. He commissioned twelve paintings of beautiful women. Pictured above is one from a set of twelve screen paintings who were assumed to be ladies of Prince Yinzhen. The scenes depicted women in their private courtyards, typically places of romantic rendezvous. 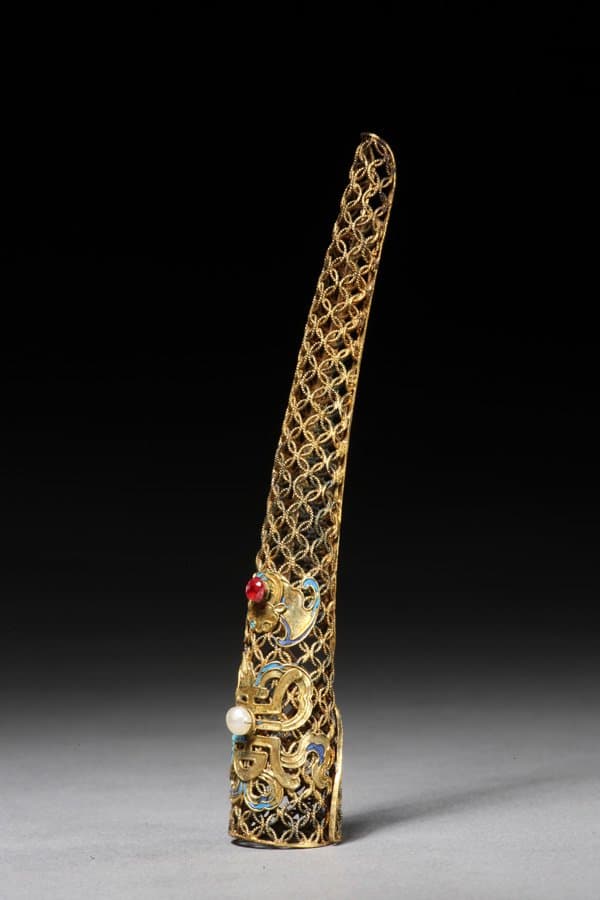 
We were introduced to Empress Dowager Cixi, who was a towering presence over the Chinese empire for almost half a century. Elite women in the Forbidden City grew extremely long fingernails – up to 15cm in length! This was a sign that they did not participate in manual labor. They wore nail guards on their pinky and ring fingers (as pictured above) to protect their fingernails, but also for decorative purposes. 
Here are some shoes that a Manchu woman may have worn as part of her leisure dress. Women desired to emulate the short steps of Han women without binding their feet. So, they attached their slippers to tall platforms which forced them to take tiny steps. 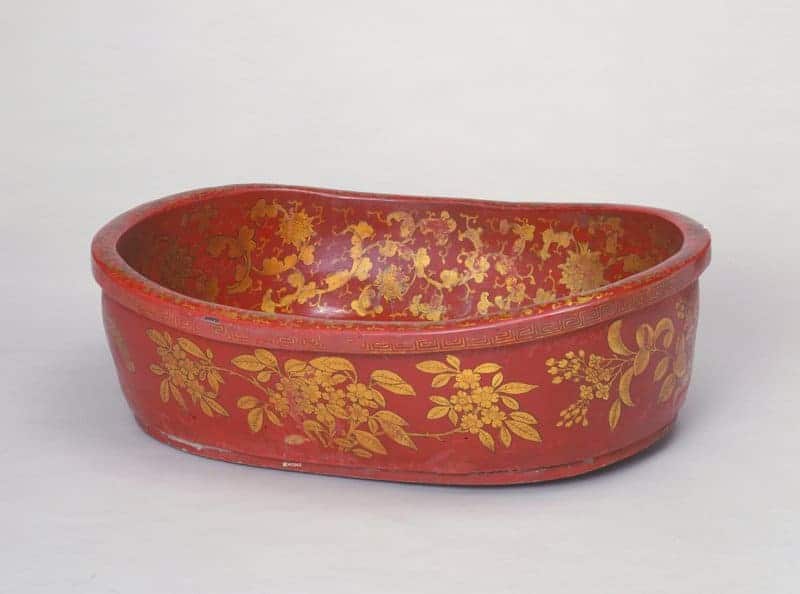 
This bathtub was used by the last emperor of China, Puyi (pronounced “Fu-yee”). He ruled China from 1909-1912 as a very young boy (from the age of three!). At age six, he was forced to abdicate the throne among pressures from the Revolution. Puyi became a prisoner in his own palace. He was forced to leave the palace in 1924, but remained the ruler of his own little empire, the Inner Court of the Forbidden City. This bathtub is decorated with gold lotus flowers and waterweeds covering the red lacquer. Eunuchs, castrated male servants, waited on the emperors in every aspect of their private lives. Everyday they would bring this bathtub, as well as other washing implements, to his room and helped him bathe.

It was very exciting to view items from the Emperor’s personal spaces that were once forbidden to everyone except the emperor himself! The emperors had incredibly valuable personal collections and some of these objects are now a part of the Palace Museum’s collection. 
This chicken cup is one of the rarest Ming porcelains. It was made by Emperor Chenghua (ruled1465-1487) for his mother, who loved small objects. Only two original cups exist today in the Palace Museum’s collection.

Twilight of the Last Dynasty All in all, we had an amazing time at the ROM’s Forbidden City exhibition! It was highly educational and very entertaining. We thoroughly enjoyed learning about a part of history that we both didn’t know very much about until now. It was also excellent to learn about the history of a country that we would love to visit someday. The exhibition runs from March 8 – September 1st, 2014. Tickets are $27 for adults, $24.50 for seniors and students, and $19 for children. Tickets also include general museum admission. The ROM recommends that you purchase tickets online in advance to avoid long lineups.

The ROM’s address is 100 Queen’s Park, Toronto. It is easily accessible using the subway, and there are paid parking lots in the area. I highly recommend that you use public transit if possible! 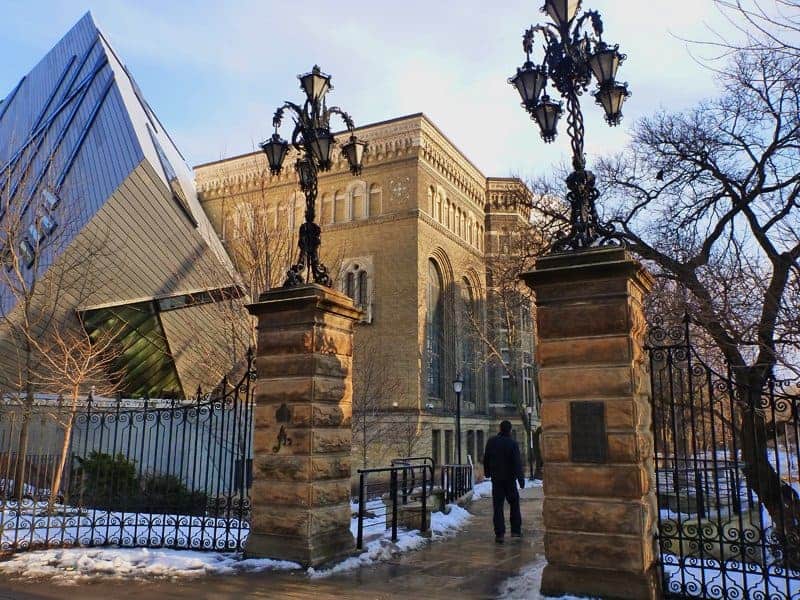 Disclaimer: Our visit to the Royal Ontario Museum’s Forbidden City Exhibition was sponsored by the ROM, and all opinions expressed about our visit are exclusively our own. We highly recommend that you check out Canada’s top historical museum and this incredibly impressive display!

Update June 2015: Check out the latest exhibition at the ROM, Pompeii: In the Shadow of the Volcano.